The Austrian city Ybbsitz has a wonderful forging history and is the stage of a yearly knife show, called the Ybbsitzer Messermarkt. European Blades Mag. visited the 8th edition and was very impressed.

Text and pictures: Bas Martens
The story of the Ybbsitz knife market really begins in the Austrian city of Eisenerz (which translates to Iron ore, and yes, that is what the city is named after). Near Eisenerz, you will find the Erzberg (Ore mountain), reportedly the world’s largest deposit of Siderite, a mineral, rich in iron ore. The Erzberg has seen opencast mining for centuries, which gave rise to a thriving metalworking industry that spanned the region.
Ybbsitz has been one of the centres of that industry thanks to the river Ybbs which supplied the necessary hydro power. It encompassed a dozen forgeries specialised in agricultural tools, although they were quick to convert their ploughs to swords if the monarch went to war.
The advent of electricity, industrialisation and mass-production caused a rapid decline during the 20th century. Most of the forgeries fell into ruin. But the tide has turned. Ybbsitz rebuilt and restored ancient forgeries. This time not for industrial production, but for the sake of history and education. The municipality erected a beautiful museum called FeRRUM, which is dedicated to iron in its multiple forms. It arranged meetings with similar cities abroad, in the Ring of the European Cities of Iron Works. Ybbsitz organises initiatives such as: workshops, demonstrations, blacksmithing festivals and a knife market. The efforts have paid off; the Austrian blacksmith legacy is on UNESCO’s immaterial world heritage list. In Ybbsitz, forging is very much alive. 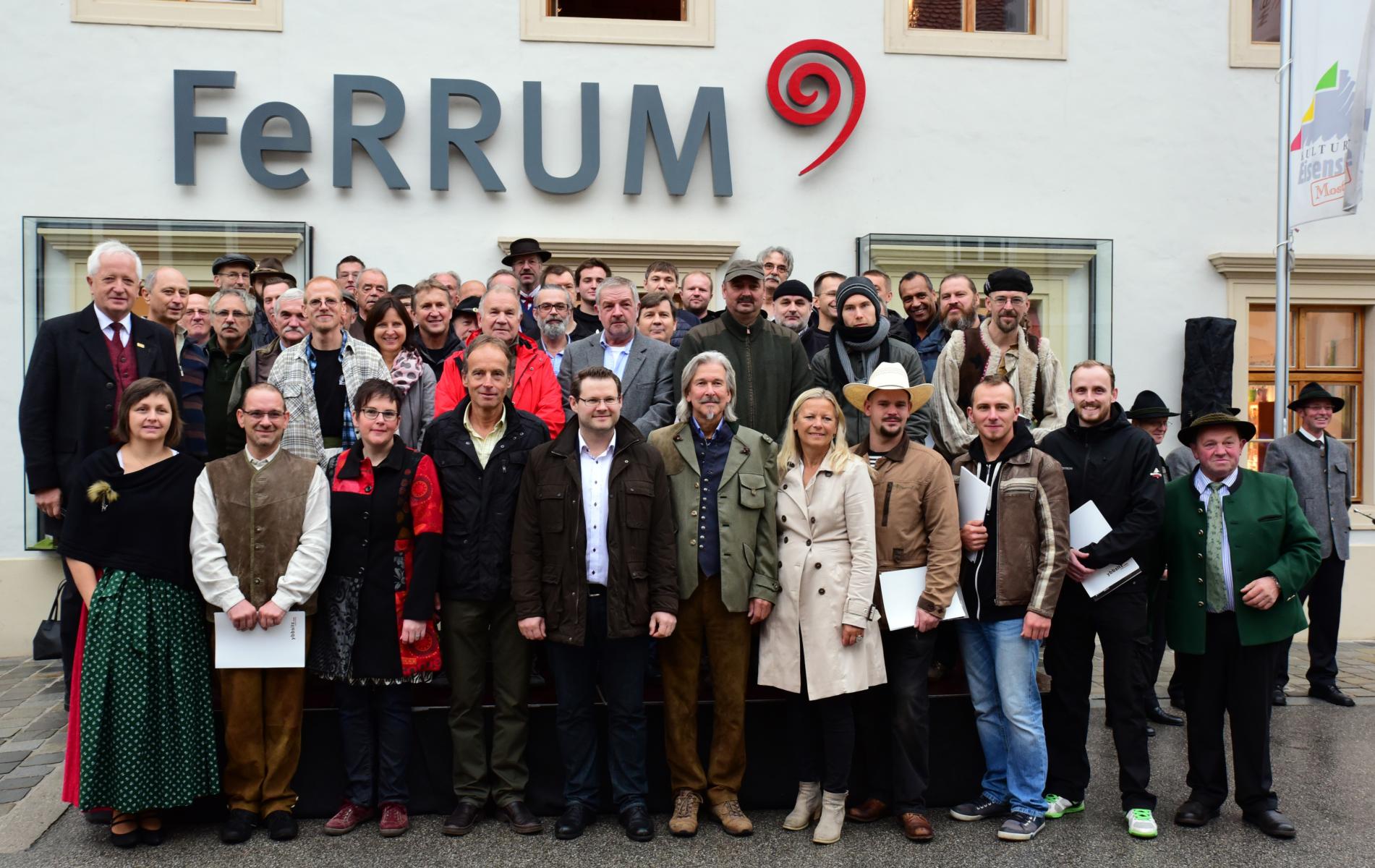 Prior to the start of Ybbsitz knife market, a group picture is taken with the exhibiting knife makers, the
organisers of the show, and the jury. (Picture Robert Jordan)
The Knife Market
The Ybbsitzer Messermarkt (Ybbsitz knife market) is one of these many initiatives. It is a relatively small show. Nonetheless, it is appreciated by the knife makers because of the friendly and informal atmosphere, including a collective dinner the evening before it starts.
This year’s knife market, on the 17th of September, was the 8th edition. It attracted more than 40 knife makers, from Austria, Germany, the Czech Republic, Hungary and Russia, among others. The “Best Knife of Show 2017” was a folding knife by Czech knife maker Milos Kislinger. The jury praised the quality of his workmanship and was especially charmed by the fact that Kislinger himself had forged the steel for his damask blade during a workshop with the American damask smith, Chad Nichols.
The following pictures show a selection of the quality and diversity of the knives at the show. Although the date for next year has not been set, the organisation has some ideas. It is thinking about inviting guest countries. For next year, that may be The Netherlands. We will keep you informed. For more information you can also have a look on their website www.ybbsitz.at or at www.ferrum-ybbsitz.at. 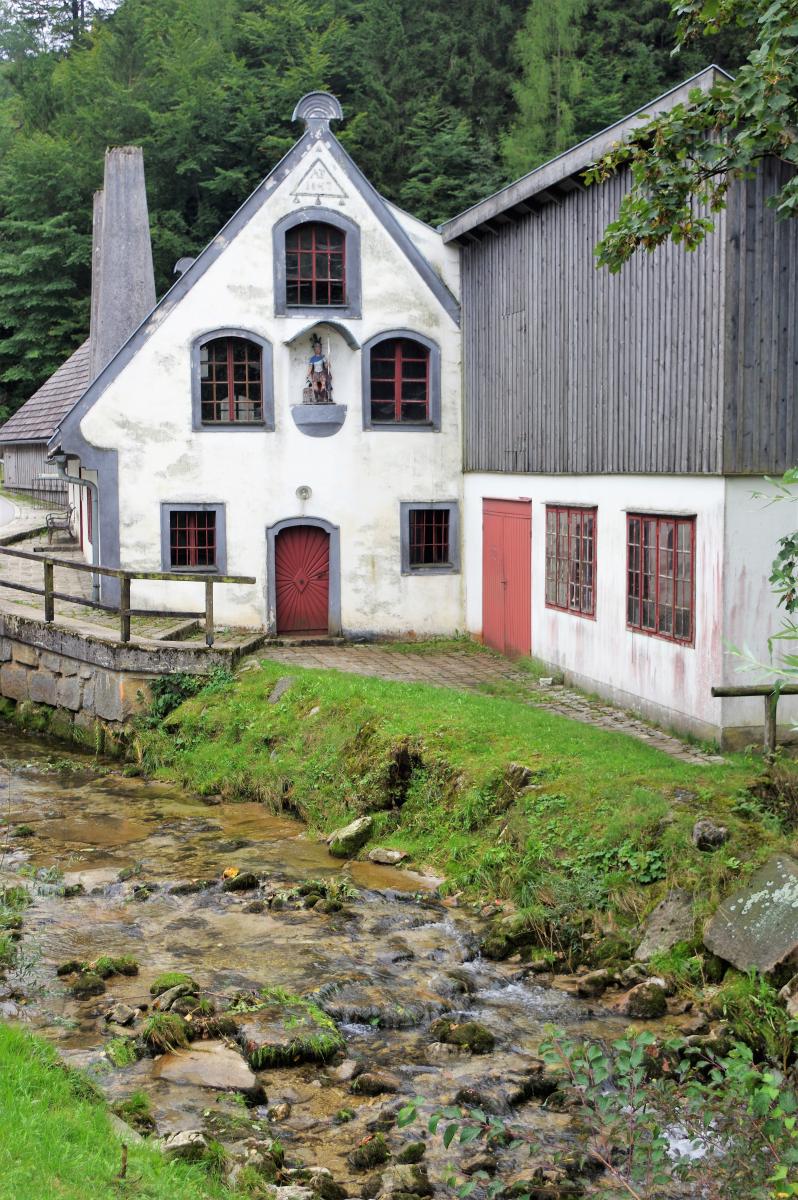 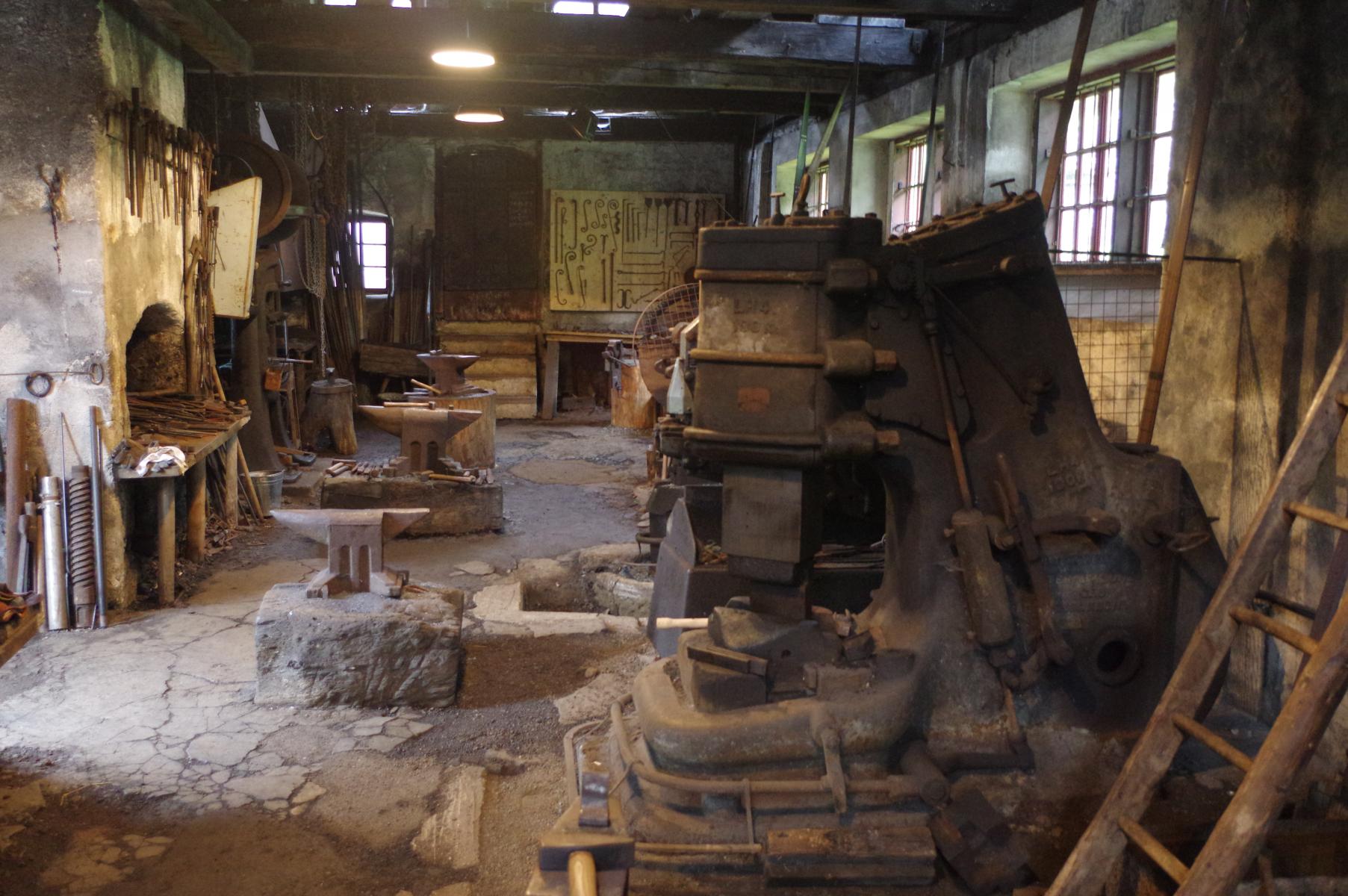 The “Fahrngruber Hammer” in Ybbsitz. From the 16th century until the late 20th century, this was used to forge
axes and hatchets. The building on the picture, dating back to 1847, has had its functionality restored. It is used
for demonstrations and workshops, but no longer powered by the river Ybbs (seen in the foreground).

Left:
The Ybbsitz knife market is held in the FeRRUM museum. The knife makers are spread over three floors and an annex.
Right:
Major Josef Hofmarcher of Ybbsitz congratulates Czech knife maker Milos Kislinger with his Best of Show award. 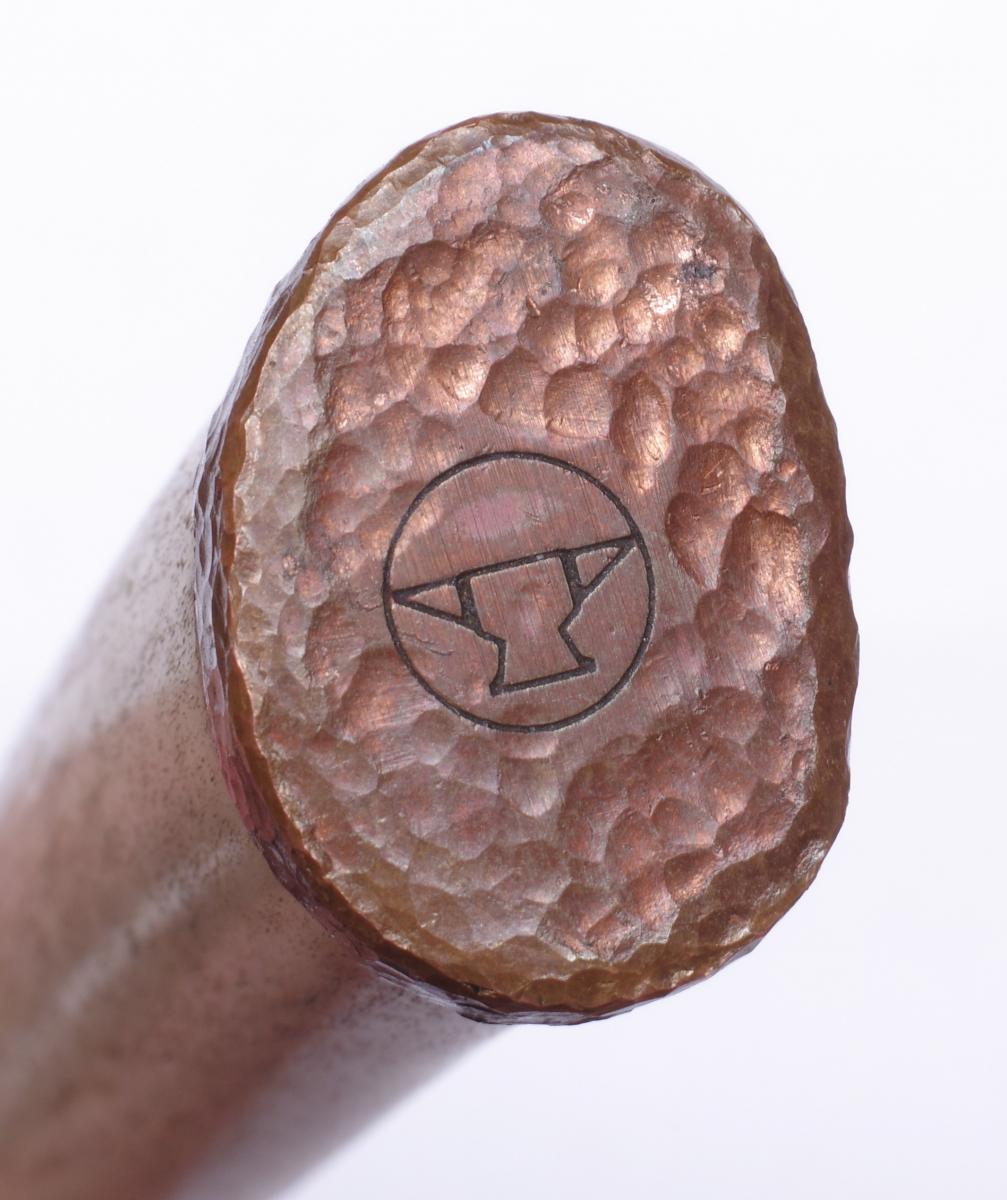 A fixed knife by Austrian maker Bernd Rutzinger. De blade is made of C60 steel, the handle is reindeer stag. 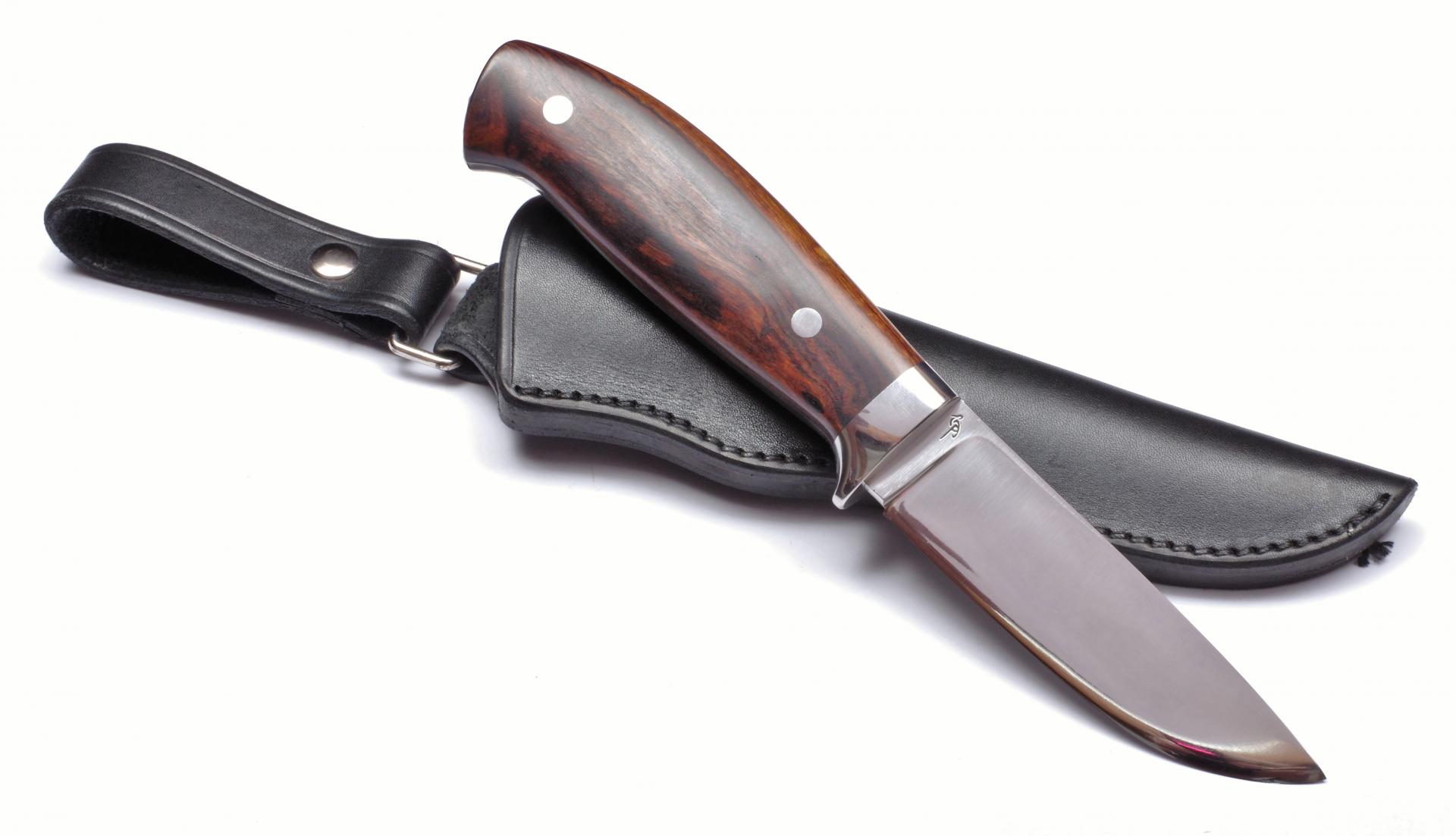 Hungarian knife maker Imre Angeloreo Palcsesz made this beautiful
hunting knife, inspired by the work of Bob Loveless. The blade is N690,
the handle is Desert Ironwood. The blade is 100 mm long.

Gentleman folder “Mammut” by Andreas Behrend (Two4sharP Art).
The blade is made of 1.4528 steel, the bolsters are Balbach Damask
“Ferrus” and the handle is mammoth ivory with gold screws. The blade
length is 85 mm. 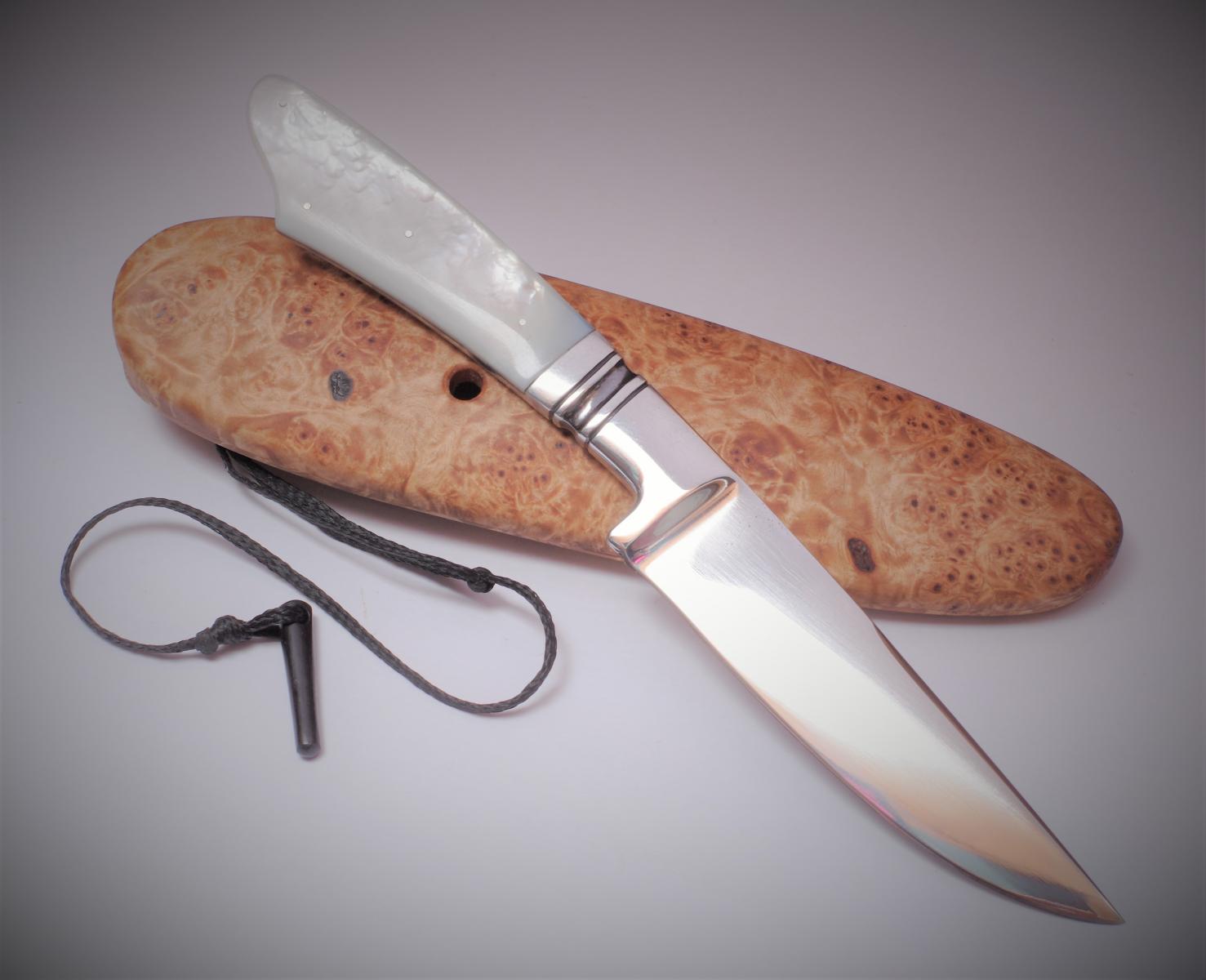 Czech knife maker Zdeněk Janča (also the organiser of the Prague
knife show) made this lovely little knife with a spring steel blade and
mother of pearl grips with silver pins. The sheath of the knife is from
birch burl. The little pin on the end of the cord prevents the knife from
falling out.

Aleš Karban from the Czech Republic made both the knife and the
wonderful wooden box. The knife has a nickel damask blade (80CrV2
and 100Cr6) and a handle made of grenadilla wood and stainless steel.
The overall length is 25 cm. 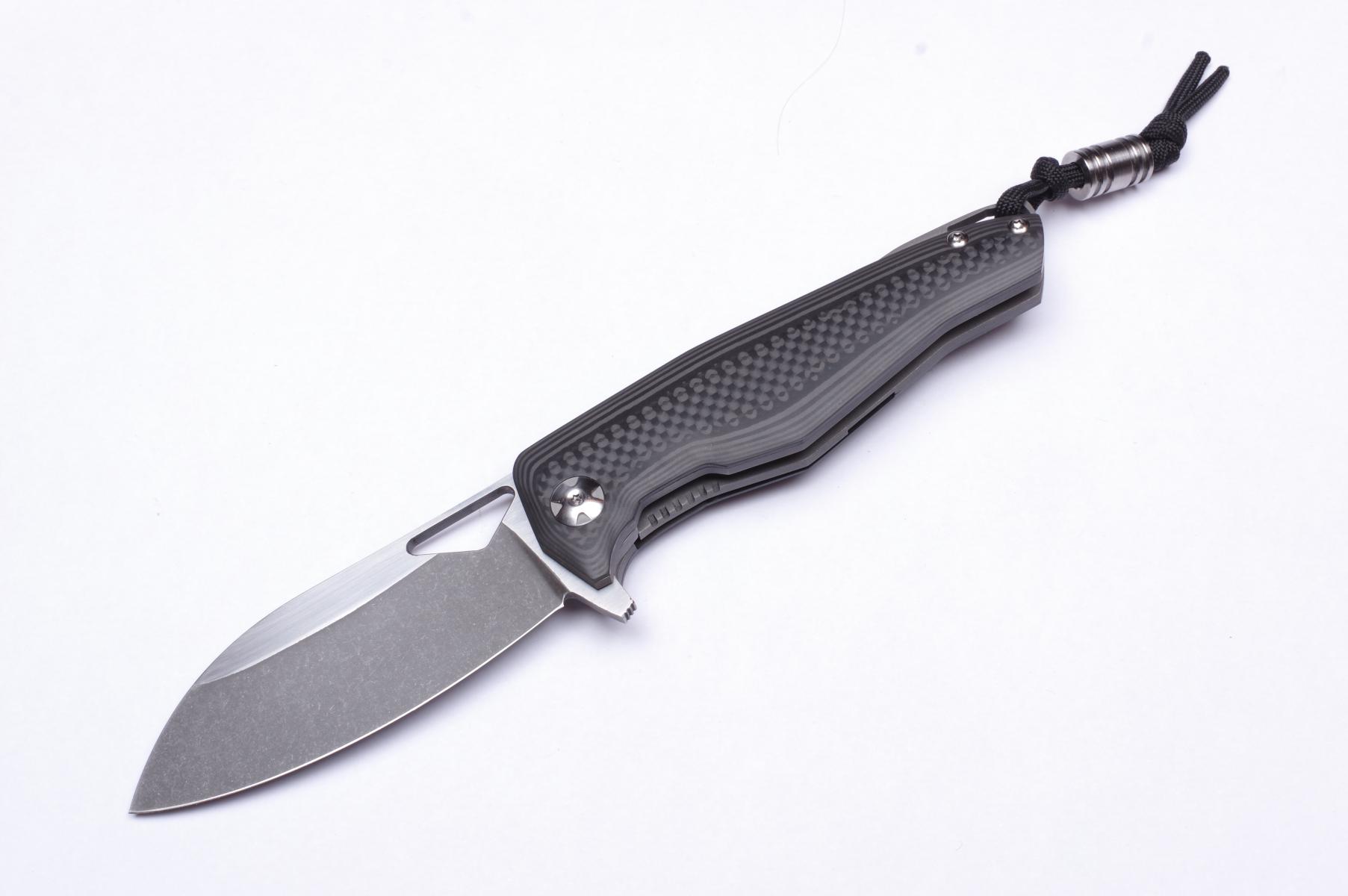 Czech knife maker Petr Weingärtner created the “Ironhide”. The
linerlock folding knife has an Elmax blade, titanium liners and carbon
fibre grips. The length of the knife is 23,5 cm. 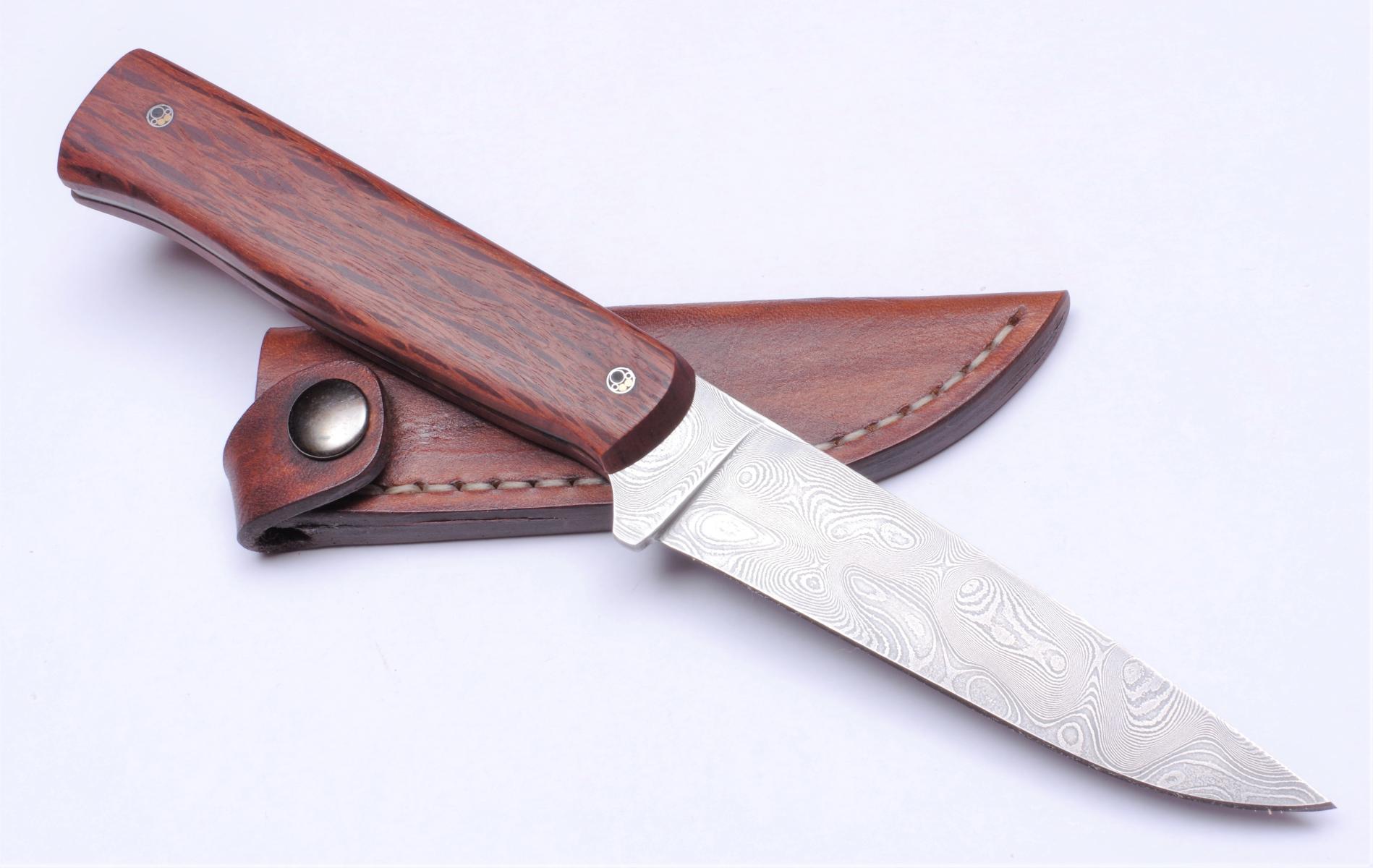 Christian Böhm made this “Austrian Nicker”, a beautiful hunting knife.
The blade is stainless damask, the handle is made of Australian
sheok. Overall length is 21 cm.

Austrian Ralf Röll is both knife maker and goldsmith. He made this elegant “Chamoix-Navaja”. A folding knife
with a twist lock. The blade is damask, the handle is Chamoix horn and nickel silver.

Austrian knife maker Stefan Gobec calls this knife “Street gang”. It is
a switchblade that measures to 34 cm when it is opened. The blade is
damask, the handle is stabilized maple and titanium. 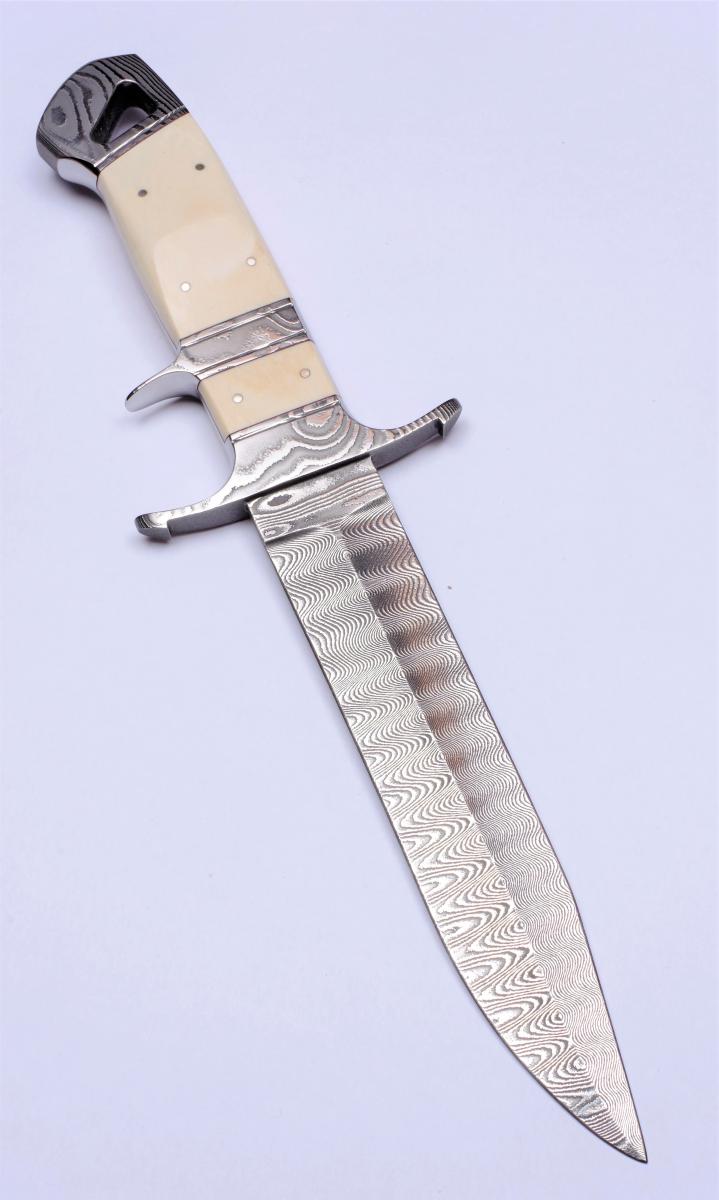 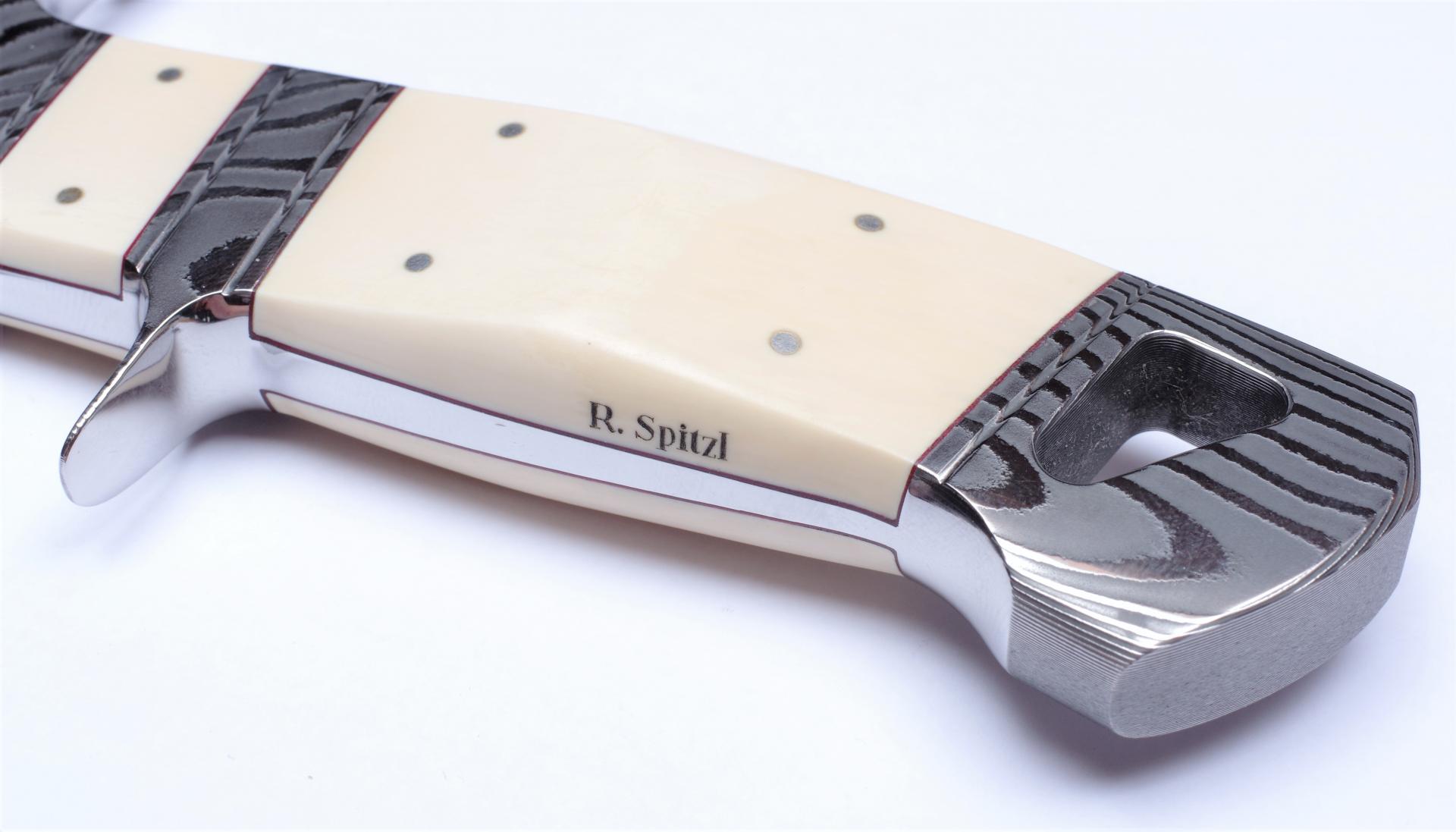 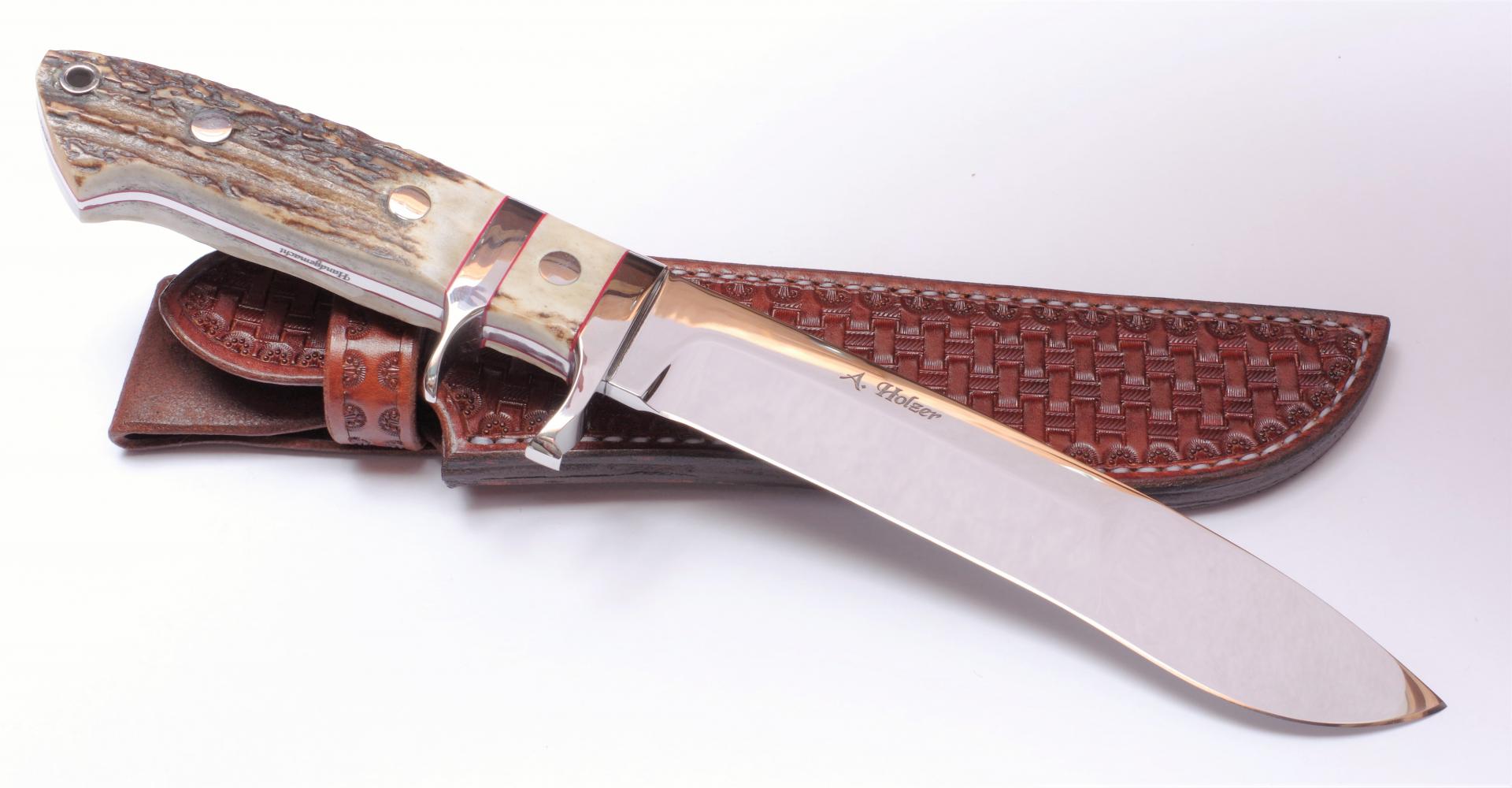 The “Double Grind” by Austrian knife maker Andres Holzer. The blade
is N690, the handle material is stag. 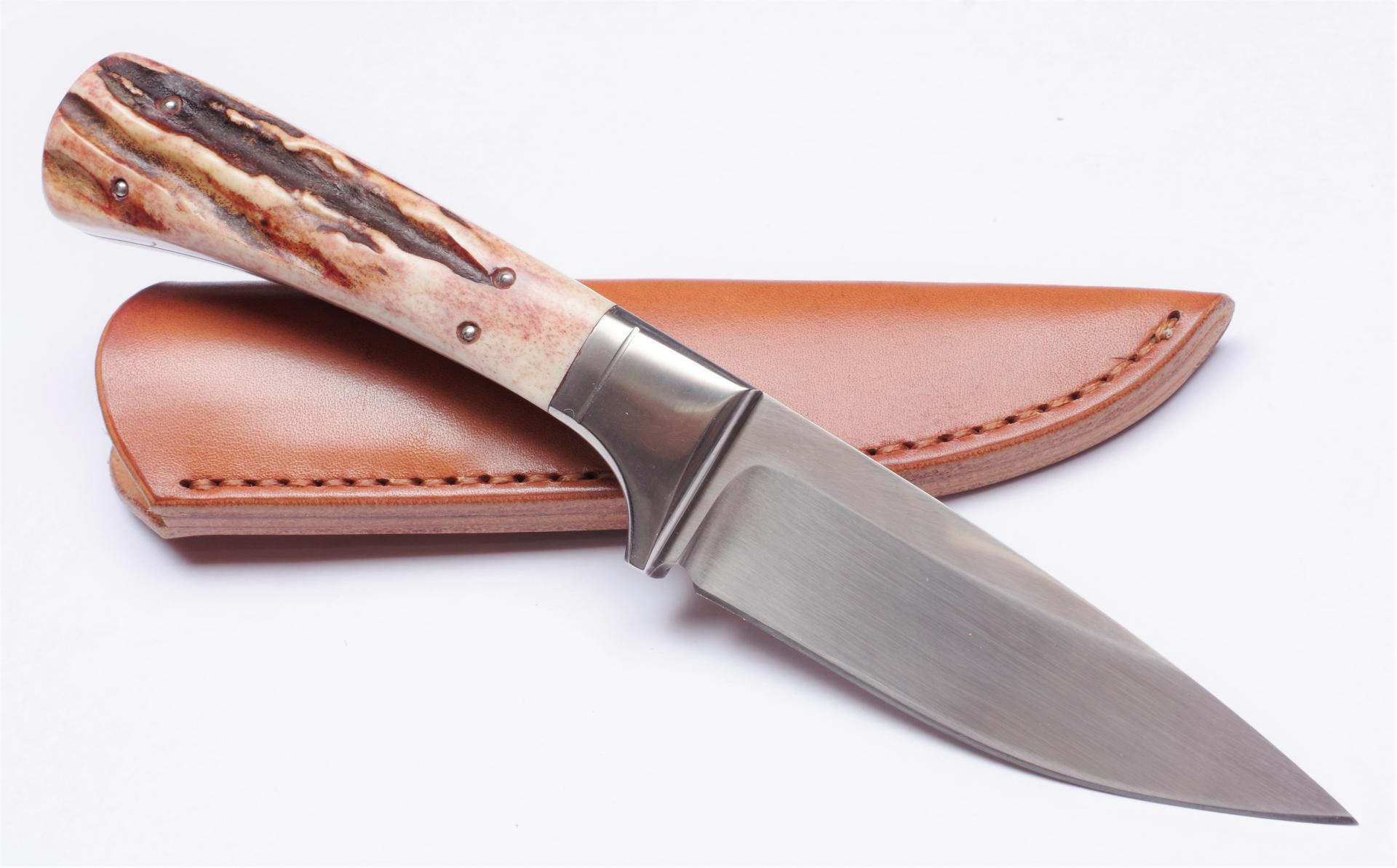 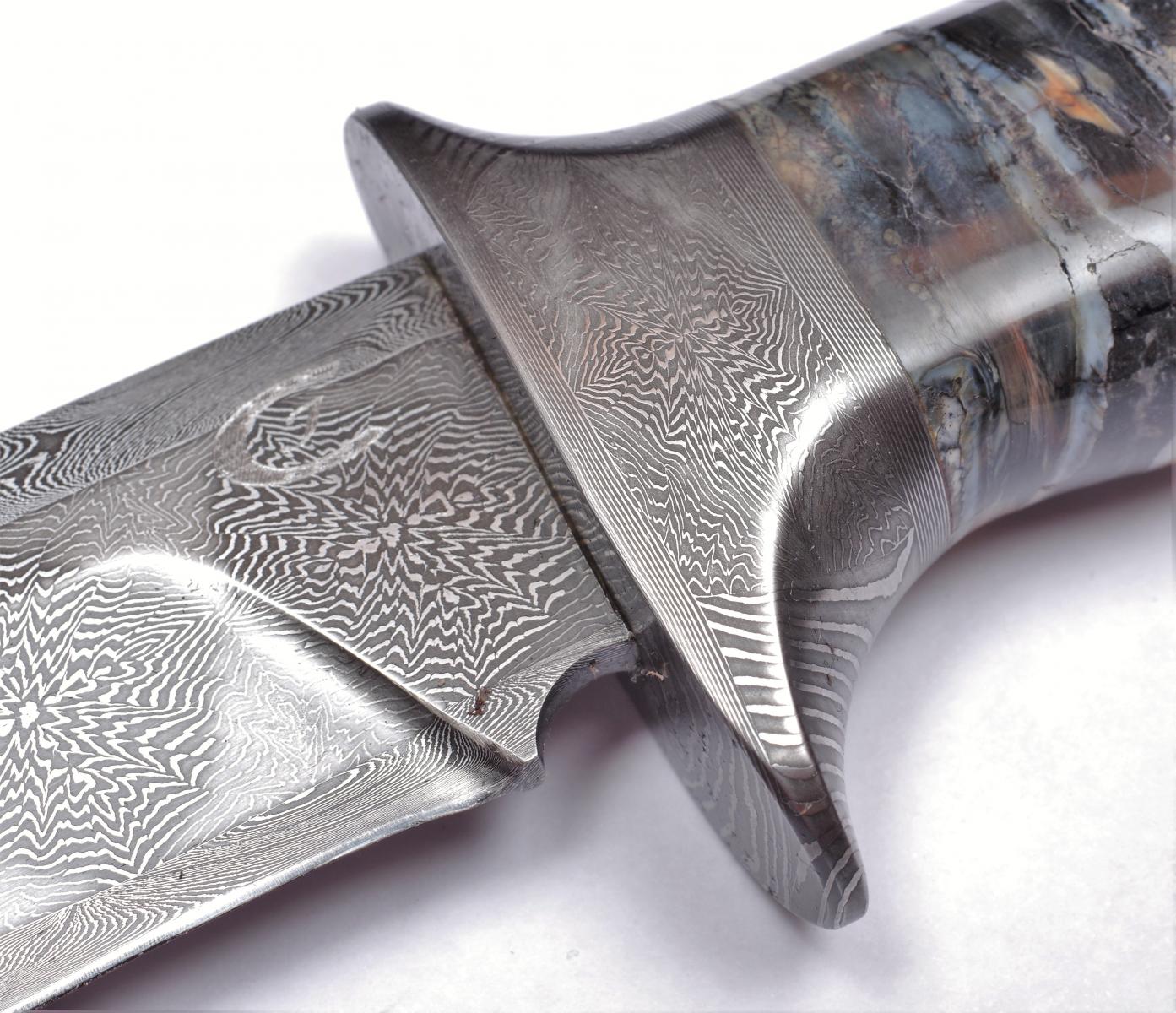 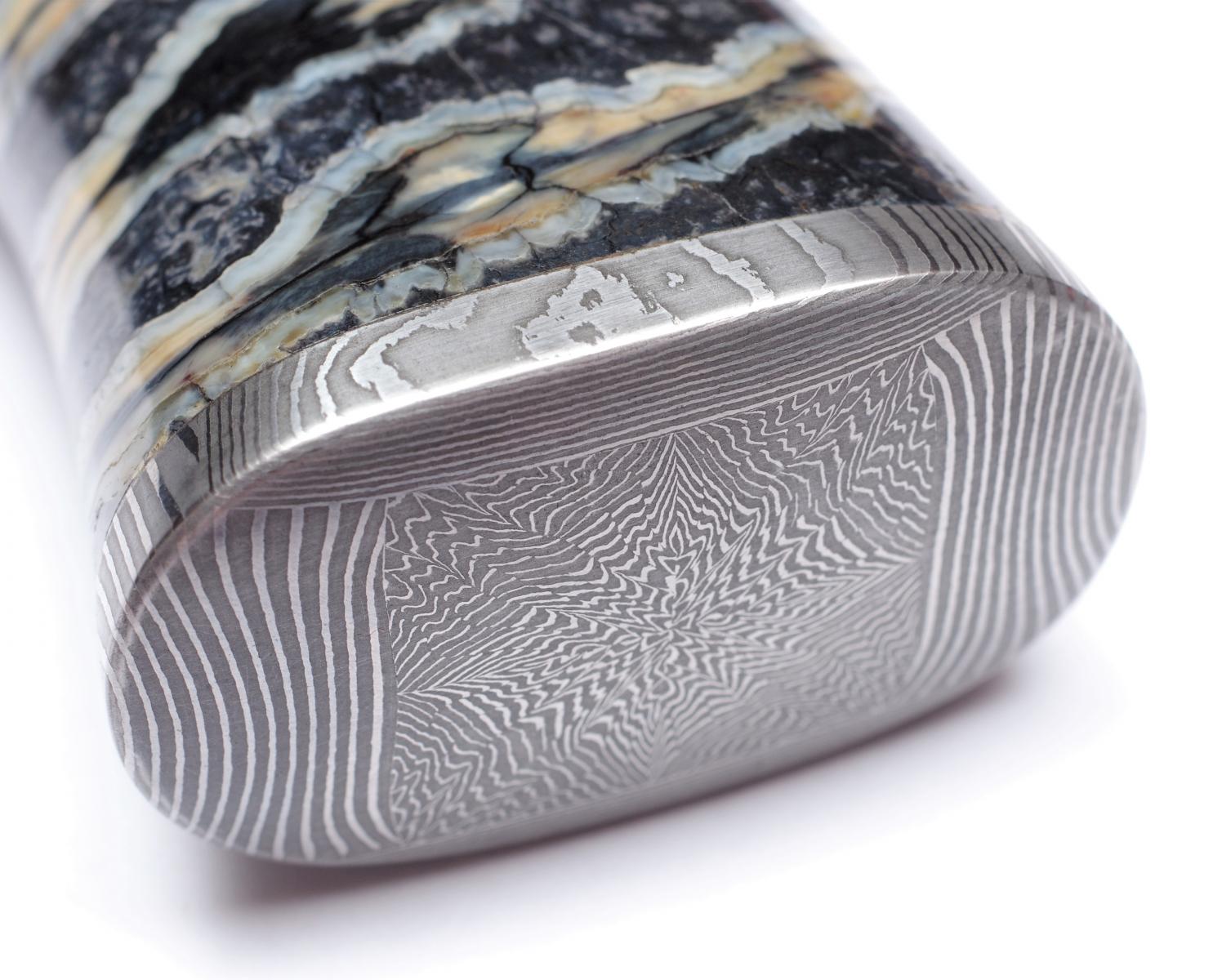 A wonderful fixed blade by Czech blacksmith and knife maker Jiří Čurda,
with an overall length of 263 mm. Blade and bolster are made of his own
mosaic damask, the handle is mammoth tooth. 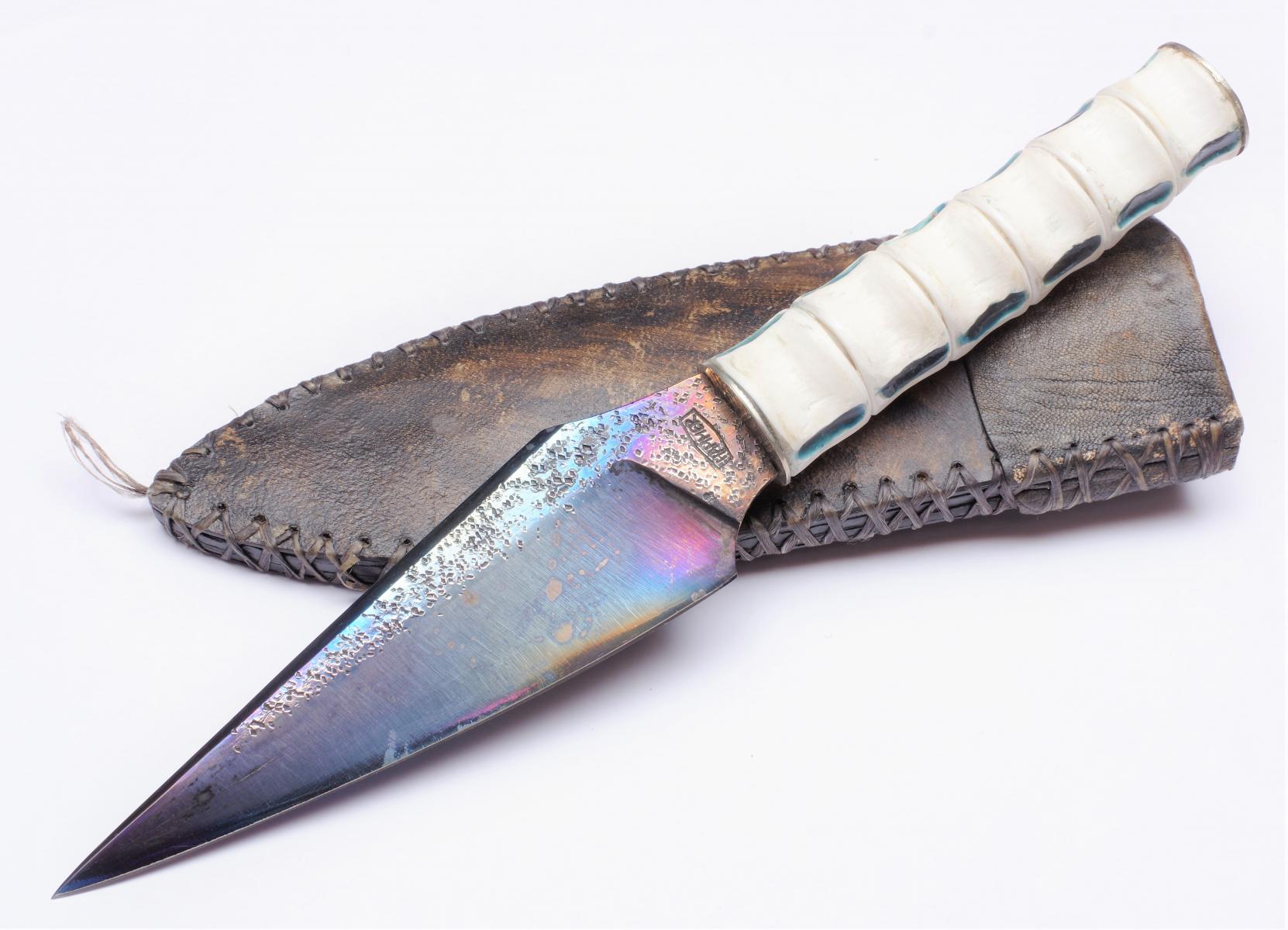 This knife, by Austrian Alois Hammer is different, both in shape and
materials. The blade is made of titanium, the handle is shark spine.

René Funk is both a knife maker and engraver. This beautiful knife is an example of his work. The blade
is RWL 34, the handle material is stabilised birch.

Czech knife make Aleš Vencovský works in a five-star hotel. Not in
the kitchen, but he can ask the chefs for advise on his kitchen knives.
This one combines a Japanese Gyuto-style blade with a European-style
handle. De blade is made of D2, the handle is ebony and brass. The
wooden sheath is decorated with flowers.

The ‘Geisha’ by the Russian Petrograd Studio. The blade is carbon mosaic
damask, the handle is walrus bone with scrimshaw. 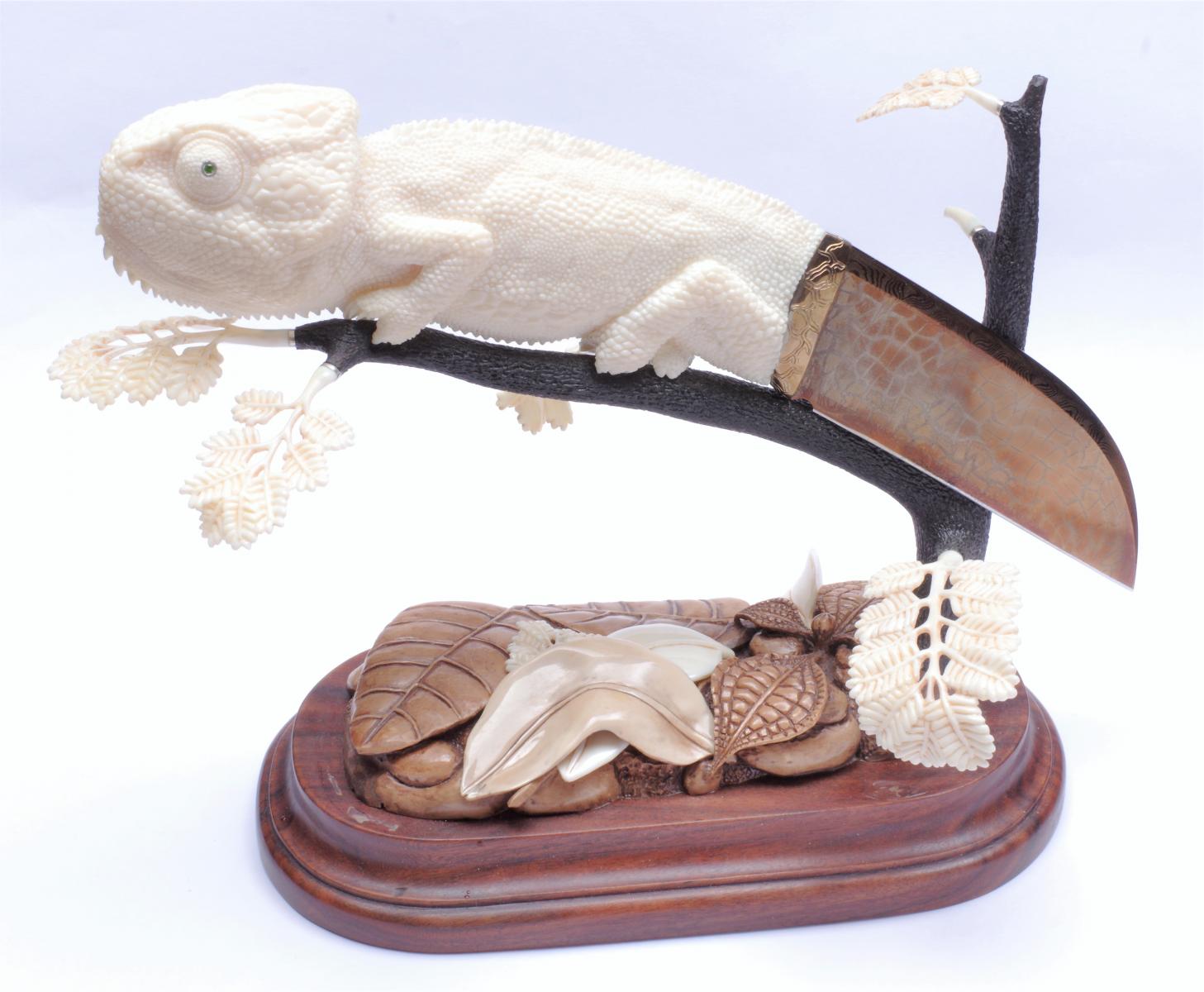