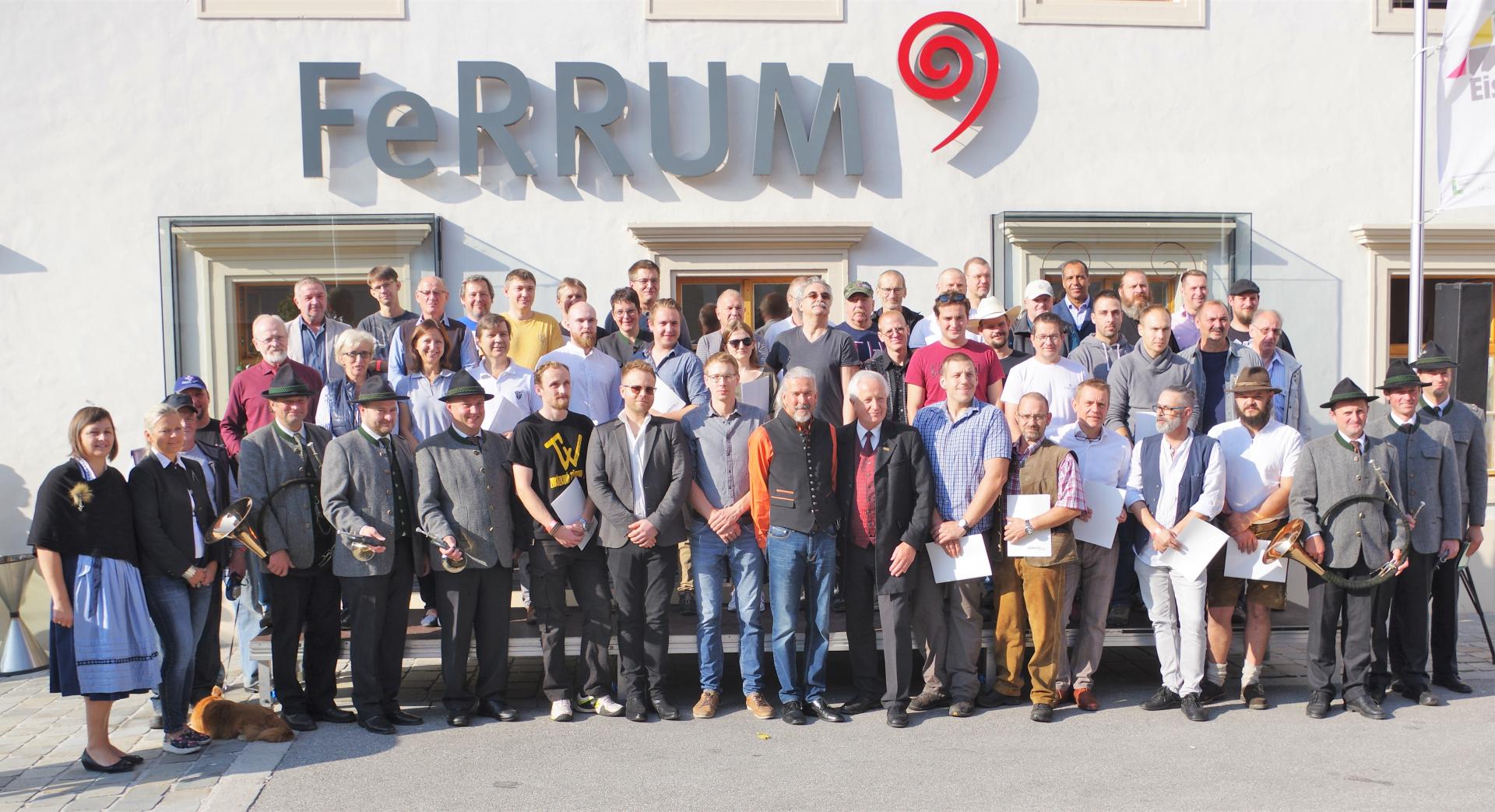 The Ybbsitz knife market has a very friendly atmosphere. Prior to the opening, a group picture is taken
with the exhibiting knife makers, the organisers of the show, and the jury.

In the nine years of its existence, the Ybbsitzer Messermarkt in Ybbsitz, Austria, has grown into a professional knife show. However, a lot of knife makers come to Ybbsitz because of the friendly and informal atmosphere. Where else will you find a collective dinner the evening before the show, hunting horn blowers at the opening of the show, and the yodel princesses to honour the Best of Show winner?
Text and pictures Bas Martens

Organisers and jury of the Ybbsitz knife market. From left to right: Susanne Rumpl, Ingo Kobermeyer,
chairman of the jury Armin Stütz, knife maker Stefan Steigerwald with his Best of Show award,
Dipl. Ing. Georg Krumoser, Eybl Anita and Major Josef Hofmarcher of Ybbsitz.
This year’s knife market was held on the 16th of September, as usual in the museum FeRRUM. It attracted 45 knife makers, from Austria, Germany, the Czech Republic, Hungary and Russia, among others. Despite (or thanks to) the beautiful weather, there were more than 800 visitors. The “Best Knife of Show 2018” was an intricate folding knife by German knife maker Stefan Steigerwald, in his well-known Steampunk style. Those who want to know more about his work are invited to read read the interview in European Blades Mag. 3.
The following pictures show a selection of the quality and diversity of the knives at the show. The next edition will be held on September 15, 2019. For more information you can also have a look on the websites www.ybbsitz.at or at www.ferrum-ybbsitz.at. 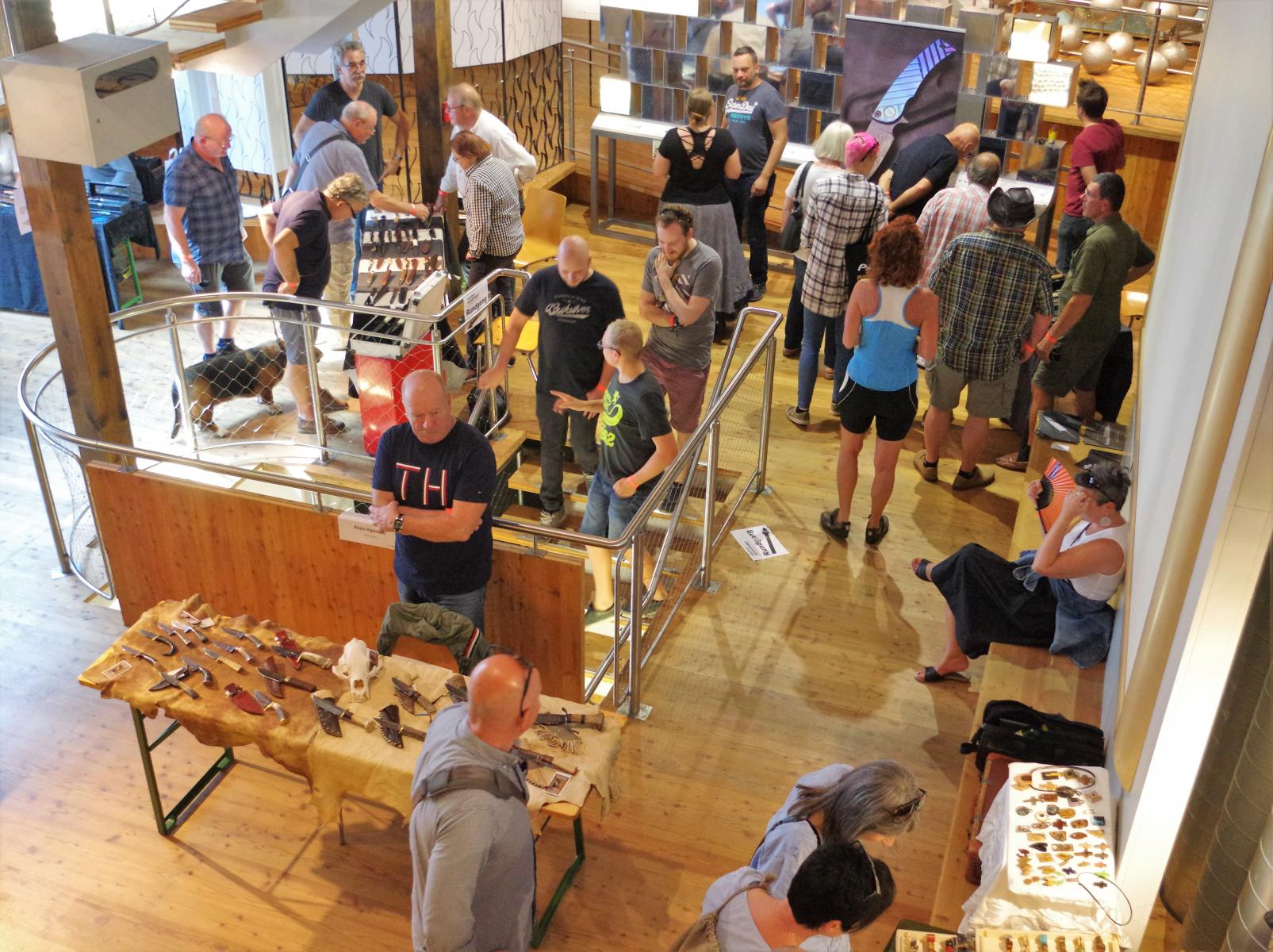 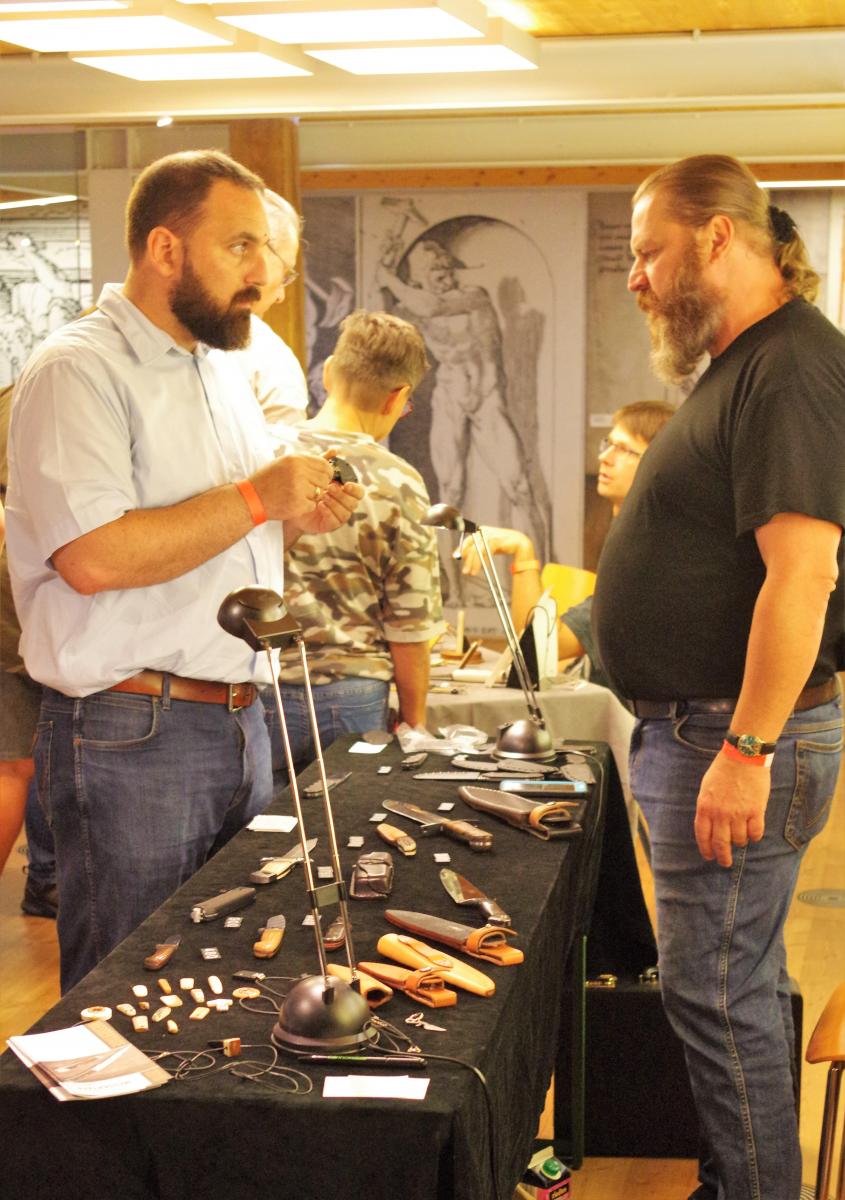 Left: The Ybbsitz knife market is held in the FeRRUM museum. The knife makers are spread over three
floors and an annex. Right: Knife maker Richard Spitzl (right) in conversation with a visitor.

What better name for a knife maker than Alois Hammer? The Austrian, also organiser of the Eisenerz
knife show, works under the name Hammer Knives. He made this native knife with a blade of 200 layers
of K720, CK45 and nickel. The handle is made of copper and bone, and the sheath is leather and ray skin.

Austrian knife makers Leopold and Uwe Plank live and work in Gresten, less than 10 kilometres from Ybbsitz.
They showed this hunting knife with a blade of K720 and 75Ni8 Damascus, and a bog oak handle. The length
of the knife is ca. 220 mm. 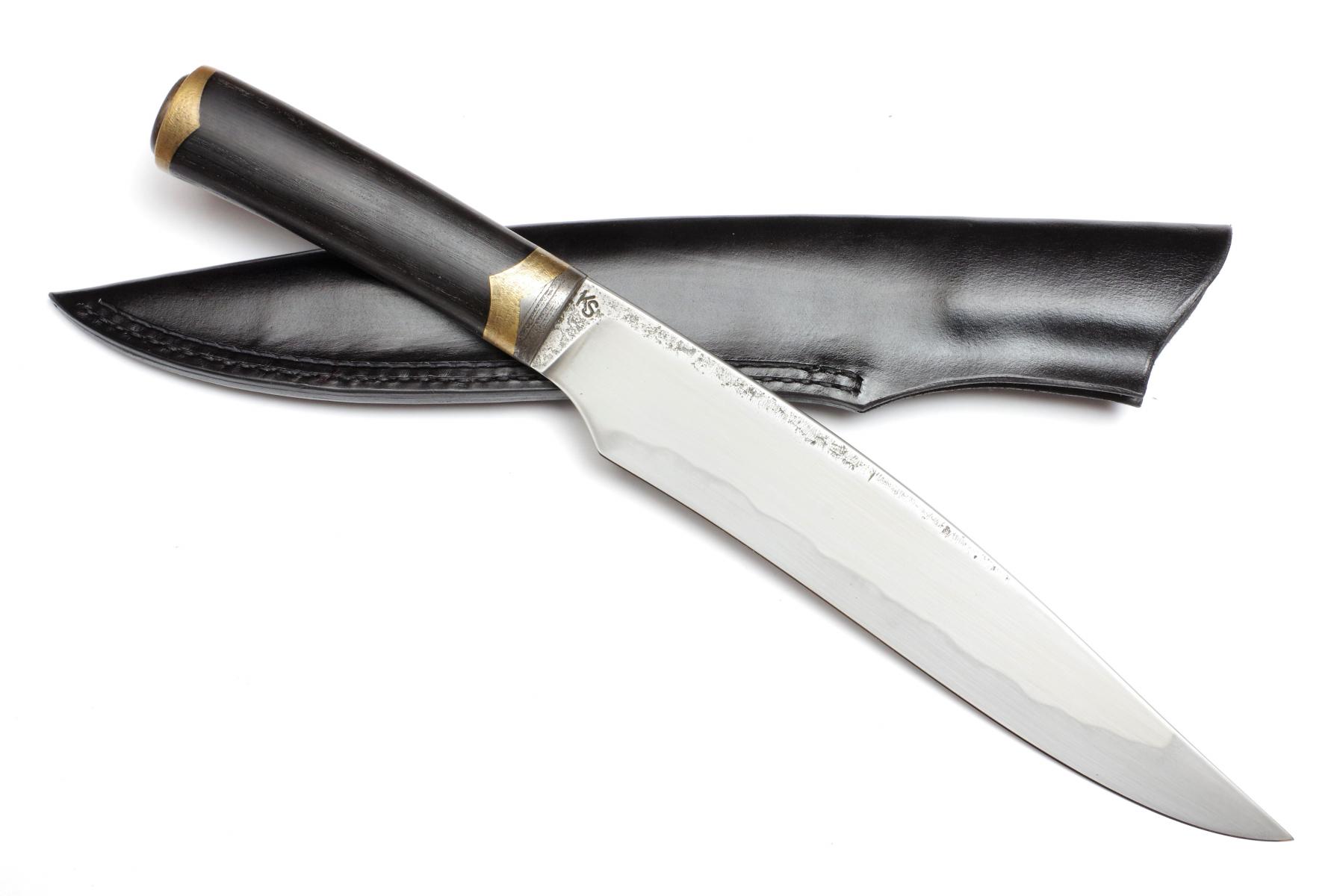 Austrian Karl Schmidt is both blade smith and knife maker. This is his Frontier. The blade, with Hamon, is
made of C10S and 1.1545 steel. The handle is old iron, brass and bog oak. The length of the knife is 23.5 cm. 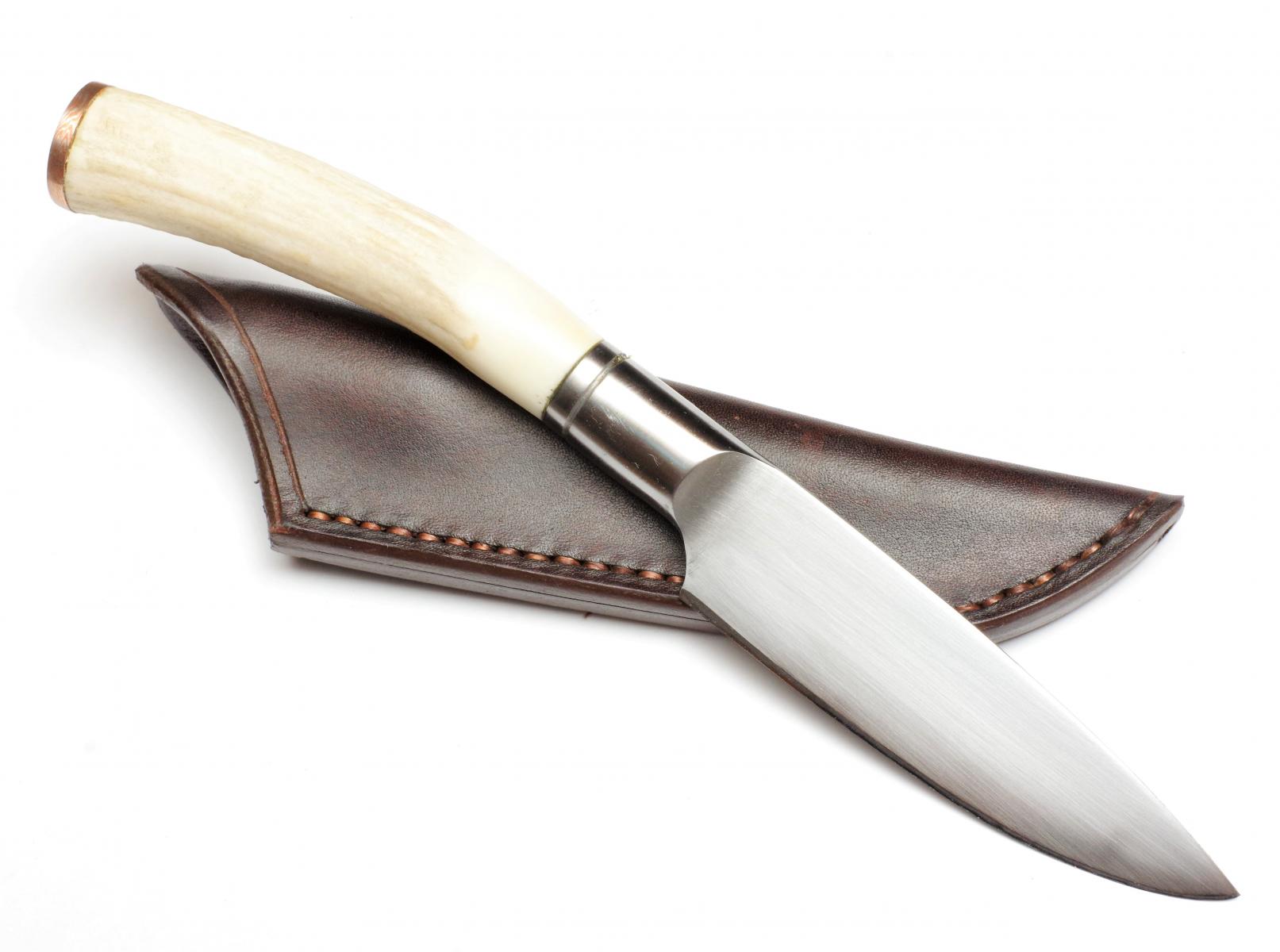 Bernd Rutzinger works under the name ‘Almspitz’, the designation for the headland at the confluence of the
rivers Traun and Alm at the foothills of the Austrian Alps. This elegant fixed blade has a 100Cr6 blade, stag
handle and Mokume Gane end cap. 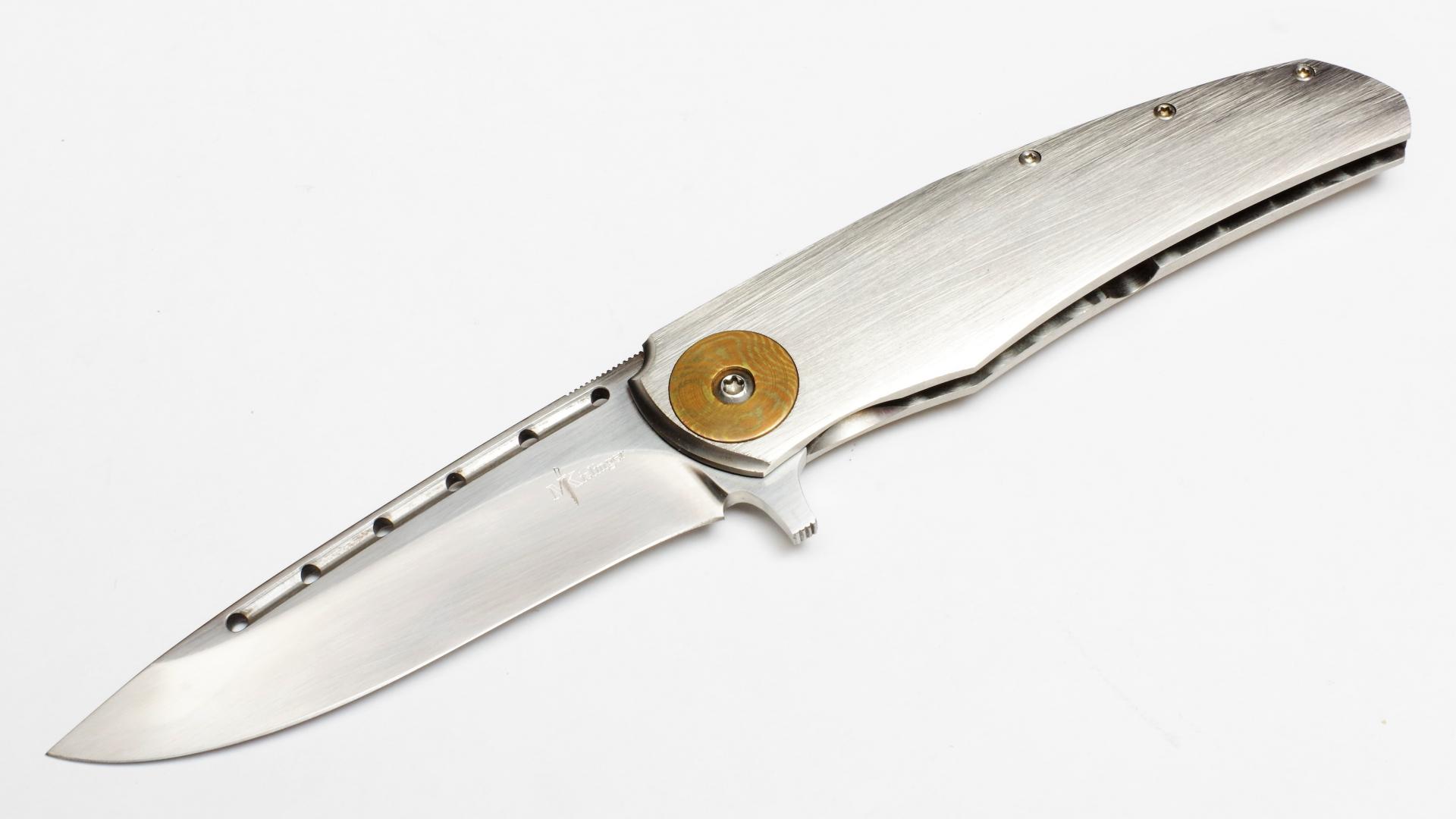 Czech knife maker Miloš Kislinger was winner of the Ybbsitz Best Knife of Show last year, The blade of
the framelock folding knife is RWL 34, the handle is grade 5 Titanium and the ring is Mokume. The blade
has ball bearings for smoother opening. 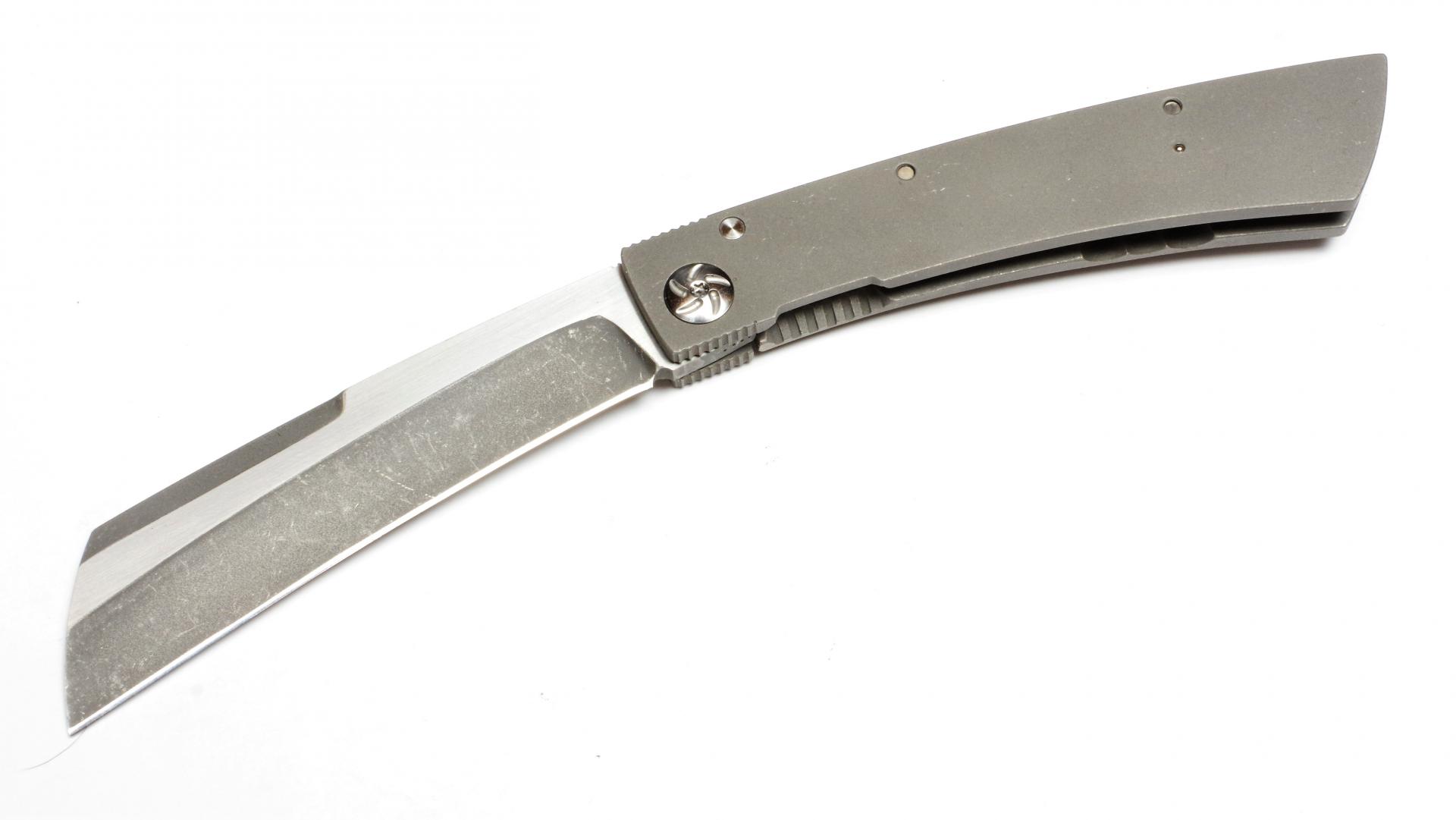 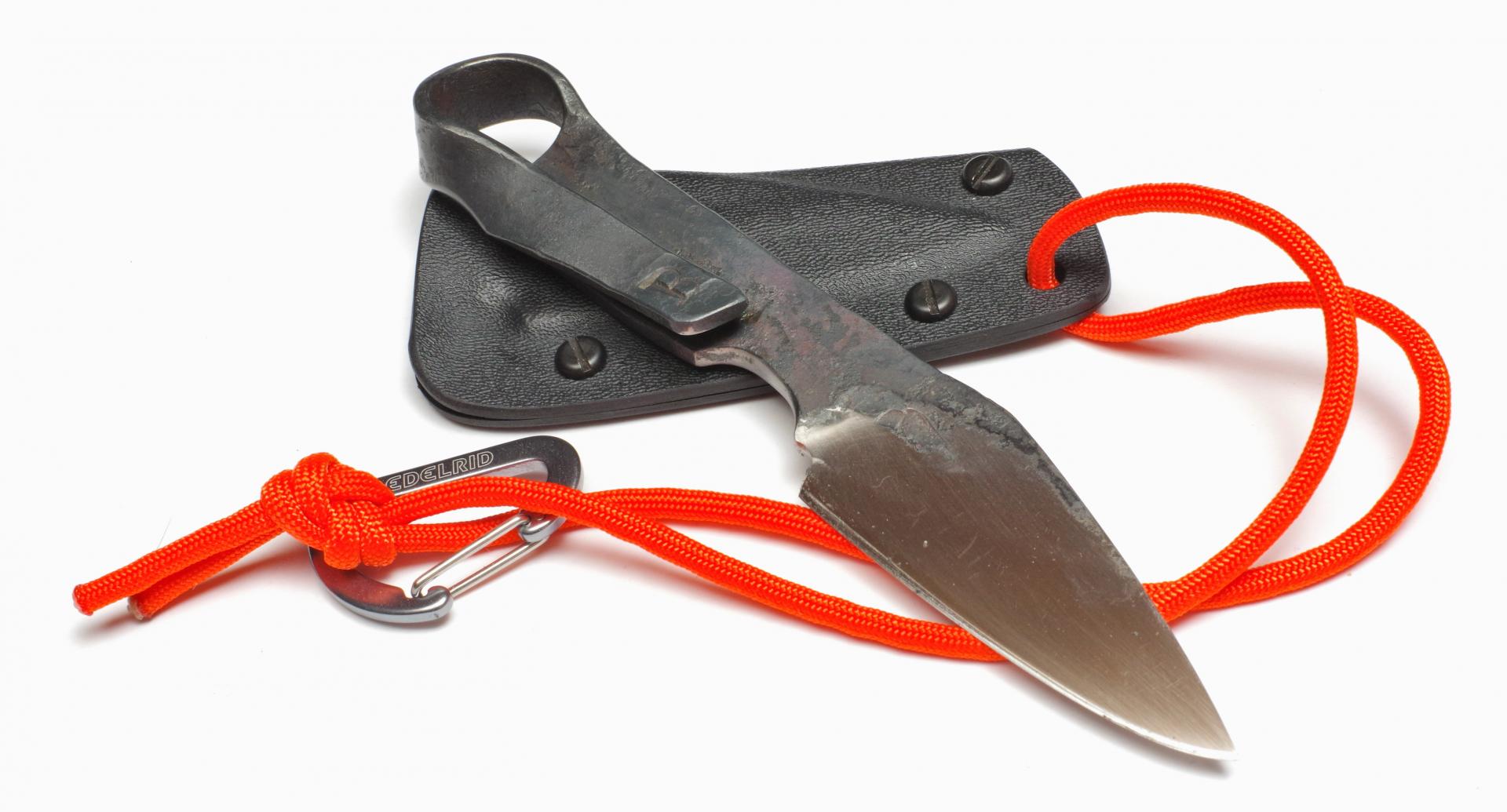 According to Austrian knife maker Michael Blank, this Parat is “the fixed pocket companion”. The knife is
made of one piece of W2 steel, folded at the rear to form both a finger ring and a pocket clip. The overall
length of the knife is about 170 mm. 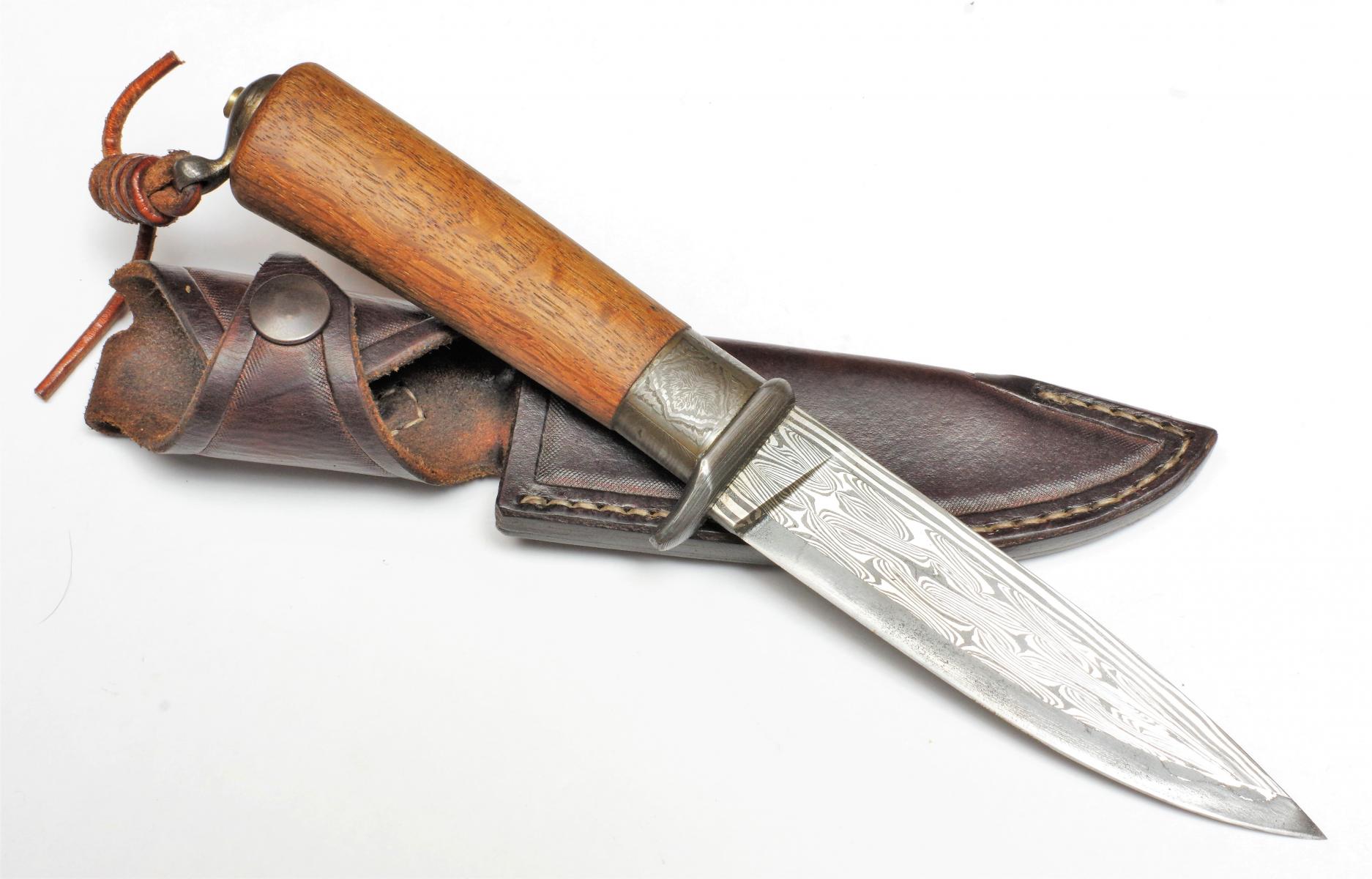 Austrian Johann (Hans) Birchner made this fixed blade, which has a Medieval touch. The Damascus steel
is 1.2842, X8Ni9 and from a file. The handle is oak. 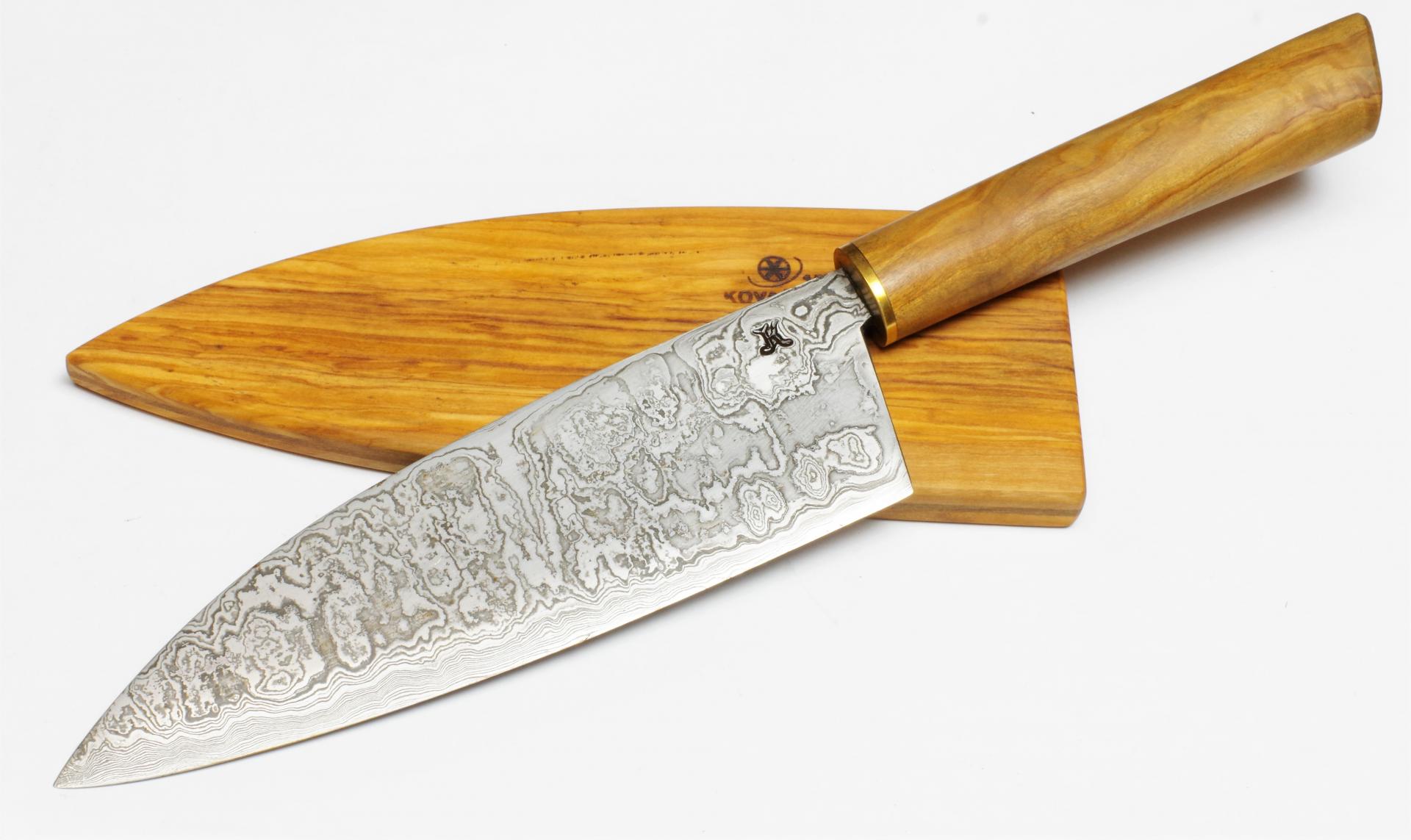 Slovenian knife maker Jože Kocačija showed this Chef’s knife. The Damascus Blade is made of 1.2842
and 1.2767 Böhler steel. Both the handle and the sheath are from olive wood.

In 2017, Austrian knife makers Florian Grosinger and Roman Großschädl established Bachschmied Messer.
This fixed blade is one of their products. The 130 mm blade is C75 steel, the handle is made of Amboina and stainless steel. The knife comes with an elaborate leather sheath. 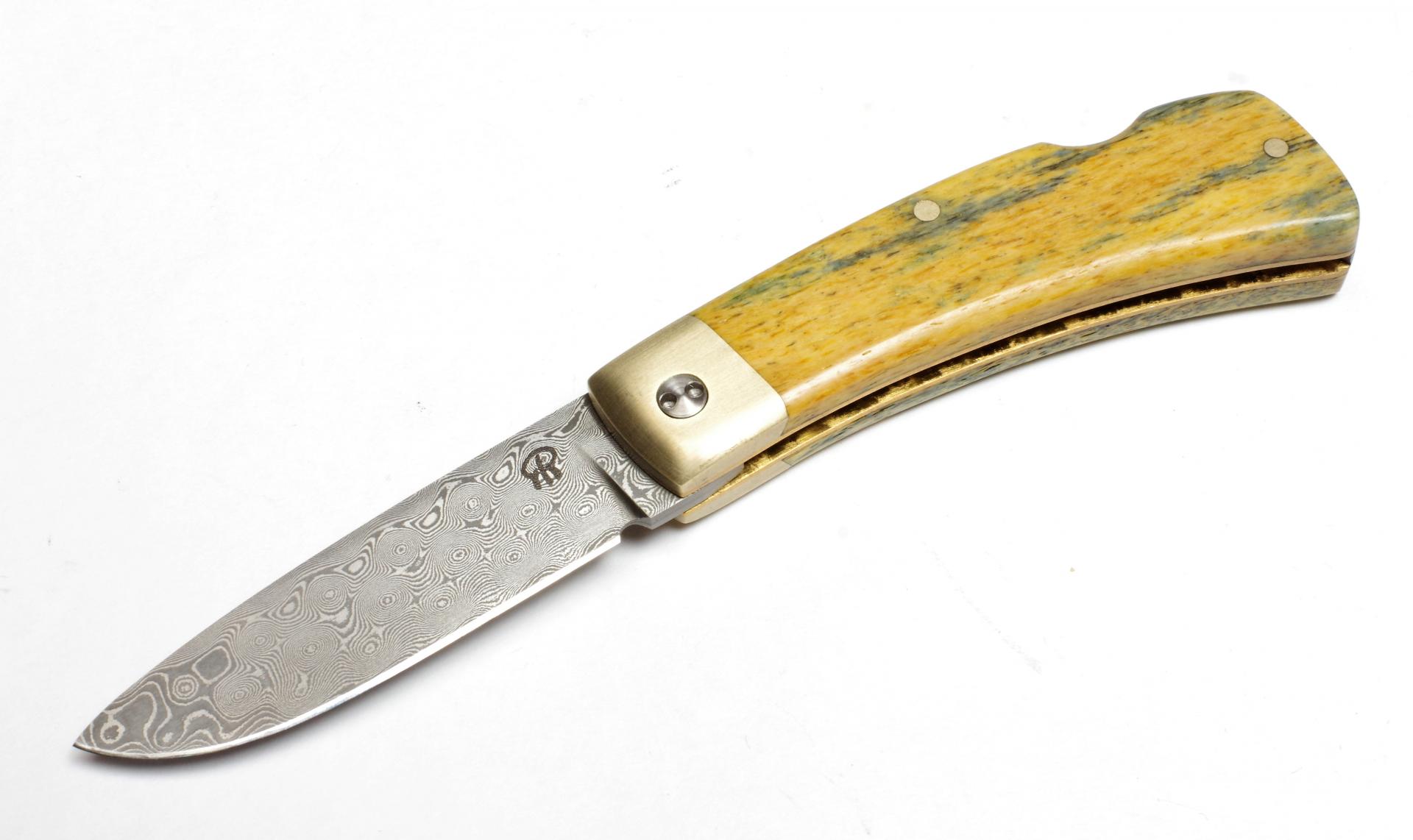 The Rider is a hefty outdoor knife by Polish knife maker Michael Trollsky. The blade is Zladinox Pyramid
Damascus, and the handle is stabilized Banksia cone, which combines nicely with the red leather sheath.
The overall length of the knife is 25 cm.

Austrian knife maker Siegfried Hattinger presented this ‘Jagdknicker’, a small hunting knife. De blade is made
of Böhler K110 and the handle is Austrian deer stag.

The award-winning knife from German maker Stefan Steigerwald, in his characteristic style. The handle
opens to accommodate the folding blade. 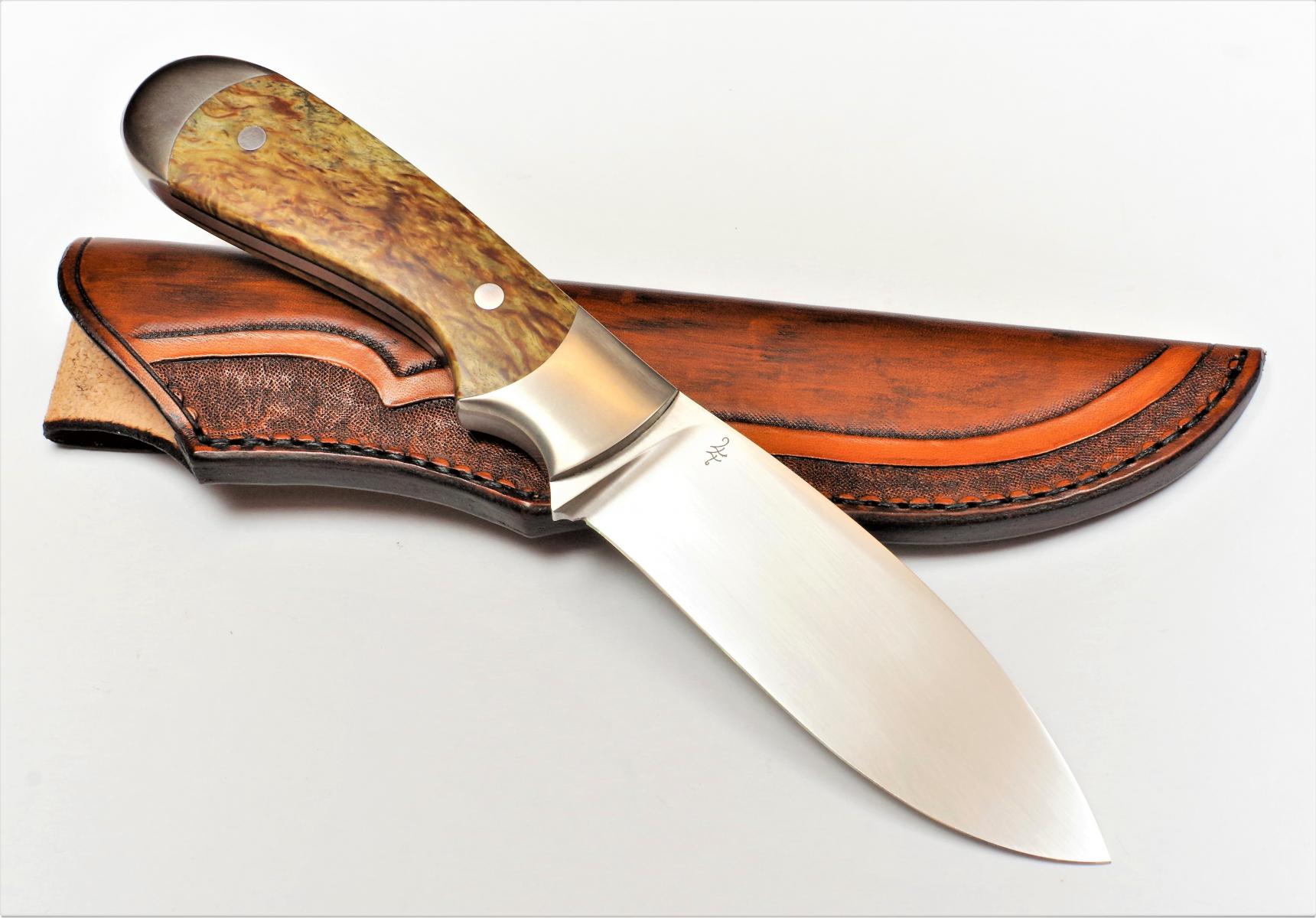 The ‘Titan Hunter’ from Austrian knife maker Andreas Behrend (Two4sharPArt). The knife has a N690 blade
and a handle made of titanium and stabilized Birch wood. 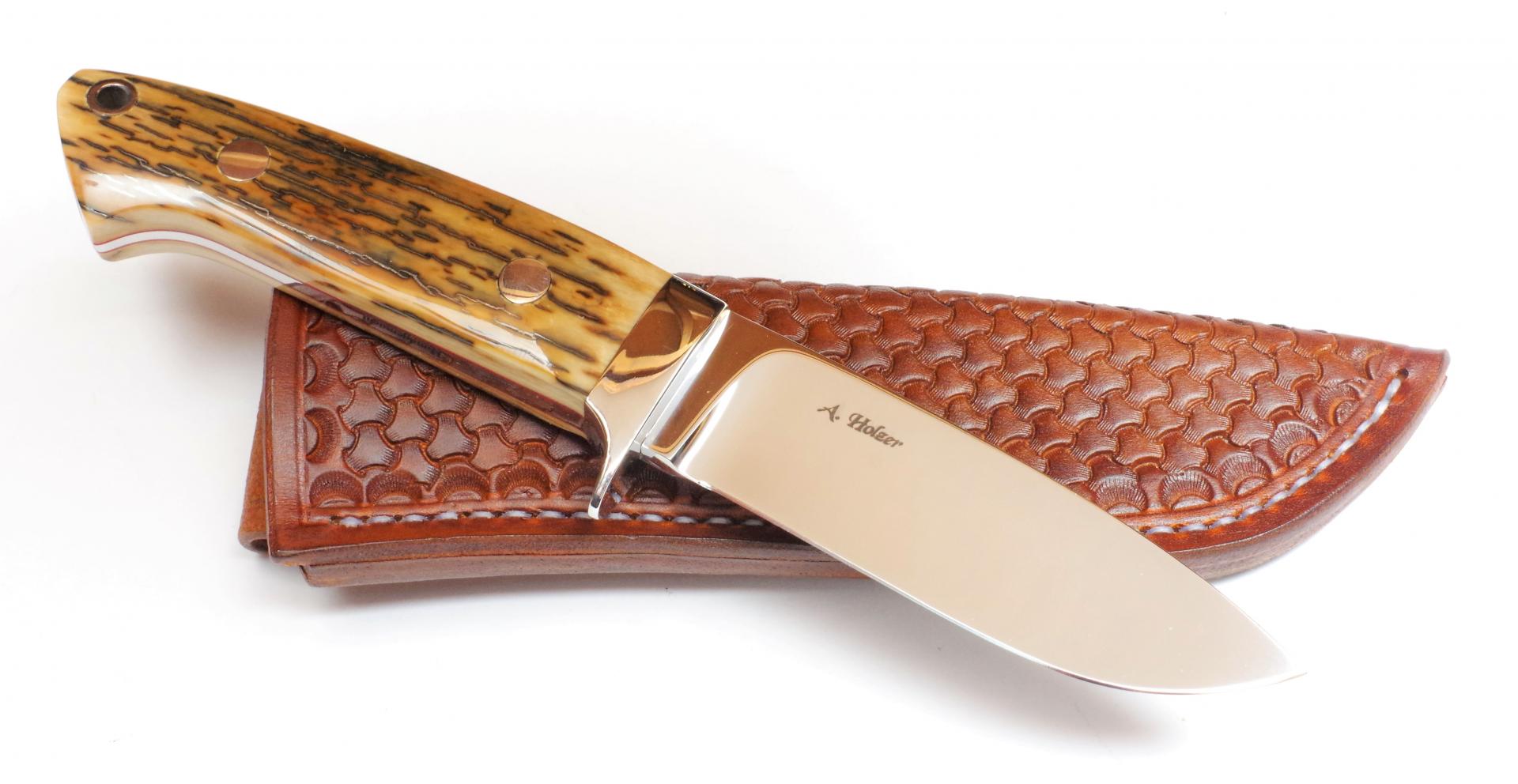 Austrian artisan Alois Reiterer makes knives, jewellery and crafts and has a very nice logo, which simply reads
‘!ois’. This knife has an etched blade from N690 steel and a polished buffalo horn handle. 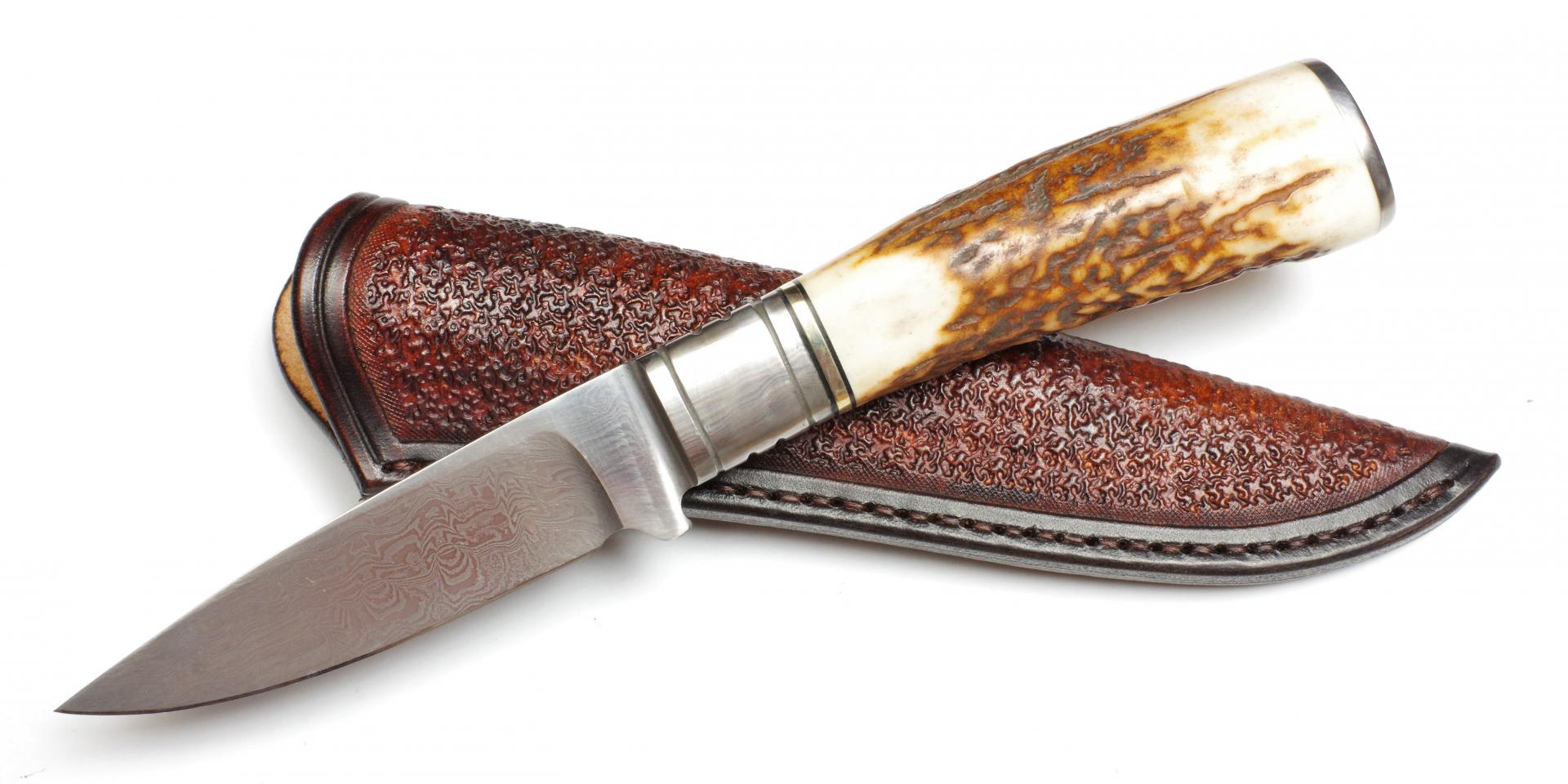 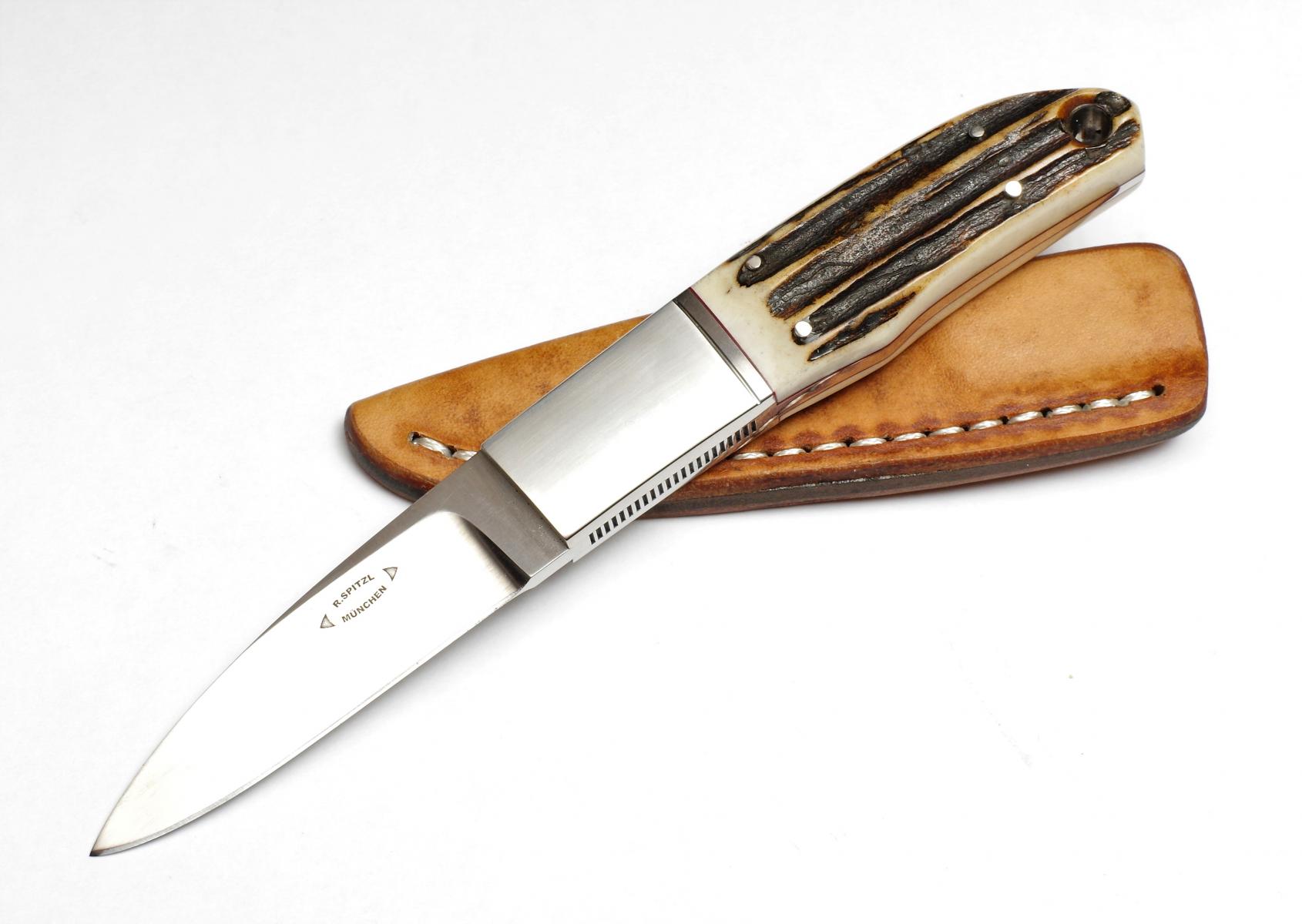 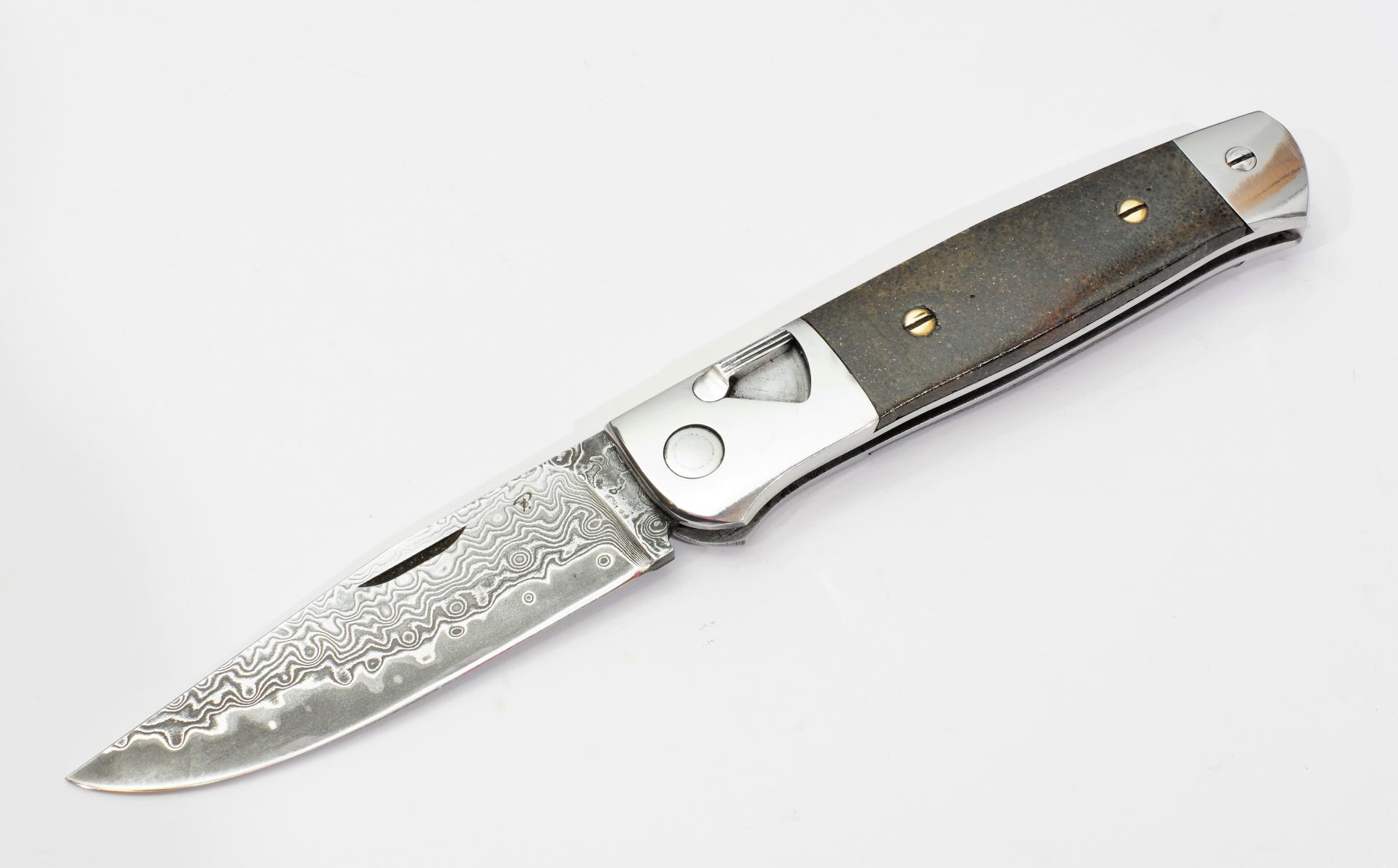 Austrian knife maker Peter Huber designed and made this folder. The left bolster has a bolt which locks
the blade. That blade is made of Suminagashi (marbled steel). The handle is 1.2379 steel and fossil woolly rhinoceros. 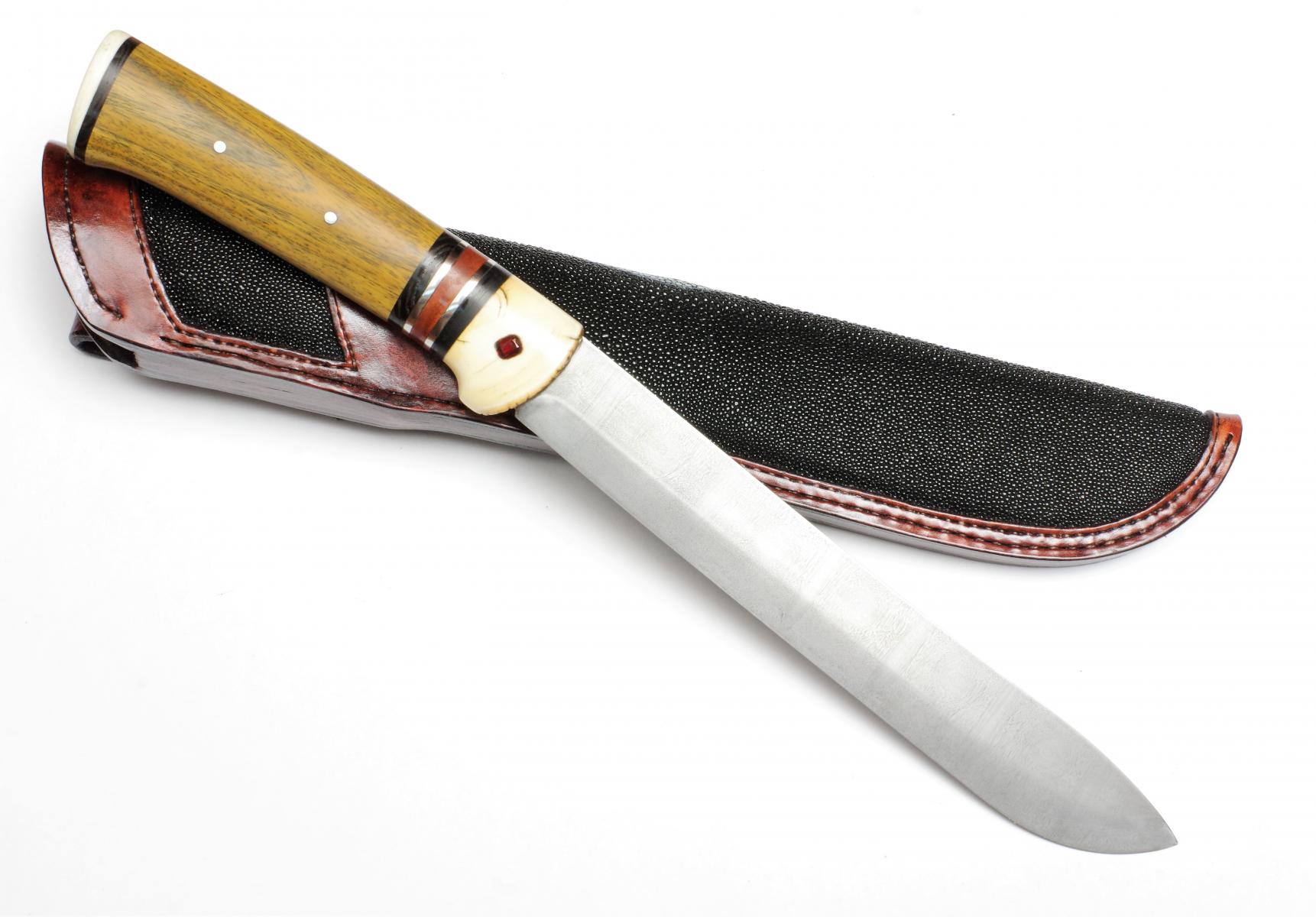 A fixed blade by Czech maker Aleš Karban, who specializes in ornamental metalwork, both in knives and
swords.  The blade is Wootz, the handle is a combination of mammoth tooth, cow bone, Guaiacum, Eucalyptus
and Bohemian garnet.

A fixed knife by Austrian maker Wolfgang Schwungfeld. The blade – as clearly indicated – is made of Böhler
N690, the handles are stag. 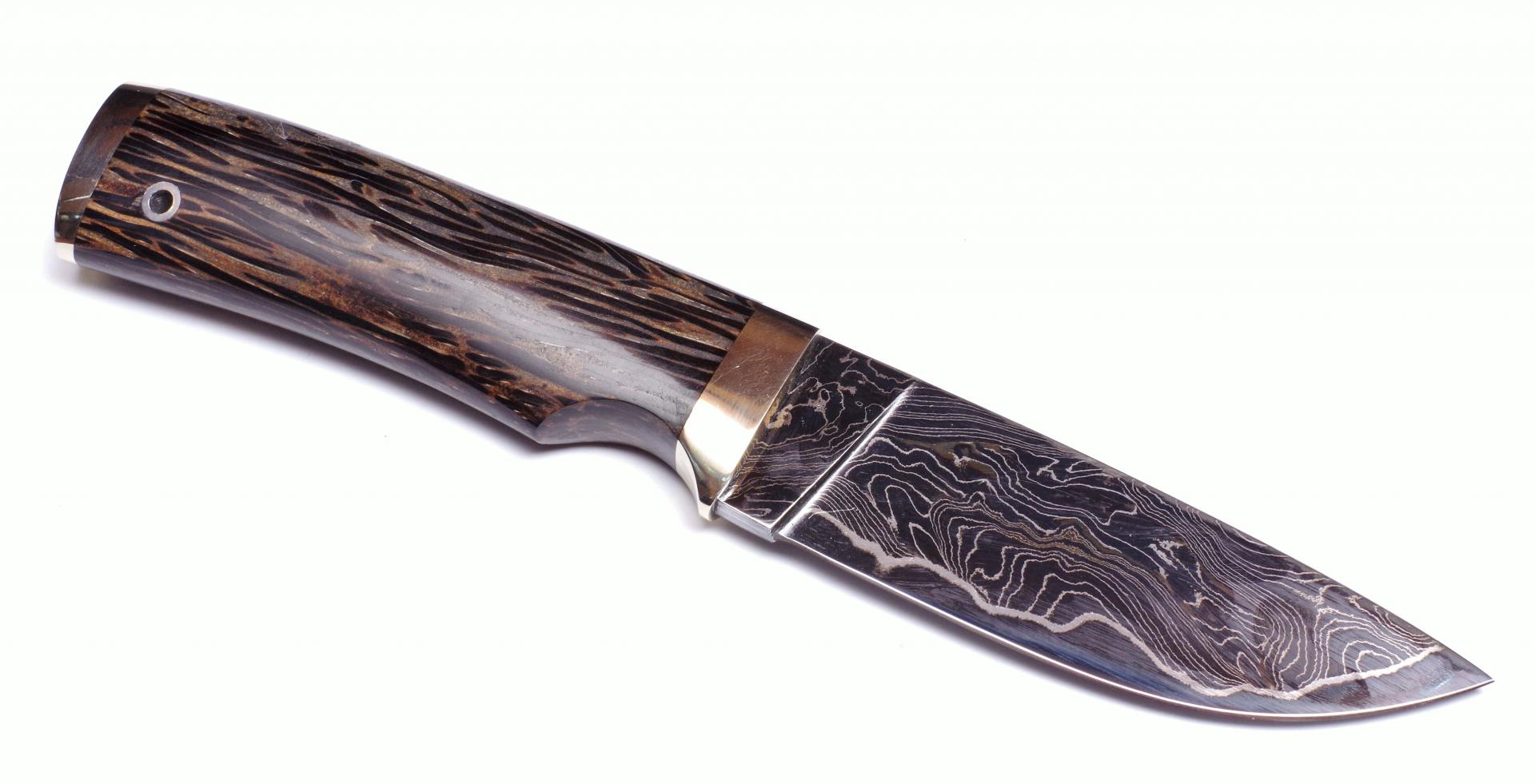 A hunting knife by Oleg Kamilov. The blade is laminated Damascus, the handles are stabilized Palm wood.