The Ybbsitzer Messermarkt (Ybbsitz Knife Market) in Ybbsitz, Austria, celebrated its 10th edition on September 15. The Knife Market maintained its high level of craftsmanship and its intimate atmosphere.

Prior to the start of Ybbsitz Knife Market, a group picture is taken with the exhibiting knife makers, the
organisers of the show, and the jury.
The Ybbsitzer Messermarkt (Ybbsitz Knife Market) is a relatively small show. This year’s edition featured 43 exhibitors, from Austria, Germany, the Czech Republic, France, Hungary and Russia, among others. But despite its size, and the fact that Ybbsitz is rather isolated, it is appreciated by the knife makers because of the friendly and informal atmosphere.
The 10th edition of the Knife Market was held on September 15, under a clear blue sky. It saw some minor changes, mostly because Ybbsitz has a new major. Josef Hofmarcher, who initiated the show and has been its patron for the past decade, has passed on the baton to Gerhard Lueger. The new major changed the restaurant for the opening dinner, but apart from that, he seems determined to continue the wonderful tradition of the Knife Market.
Contrary to previous editions, there were not one, but two ‘Best Knife of Show’ awards –for a fixed blade and for a folding knife. Czech knife maker Milos Kislinger won the award for the folding knife, just as he did in 2017. The best fixed blade was a kitchen knife by Austrian maker Martin Huber. Congratulations to both of them!
The pictures on the following pages show a selection of the high quality and diversity of the knives at the show. The date for next year has not been set yet, but we will keep you informed. For more information you can also have a look on their website www.ybbsitz.at or at www.ferrum-ybbsitz.at.

This folding knife, the Wave, by Czech maker Milos Kislinger, won the Best of Show award. The blade has a
stainless D2 core with five layers of San Mai. The handle has Timascus bolsters and carbon fibre scales.

Austrian knife maker Martin Huber won the Best of Show award for one of his kitchen knives. This is another
example of his work: the ‘Jäger’ (Hunter). The full integral knife has a blade from 450 layer Turkish Twist
Damascus, the handle is Mammoth tooth. Overall length is 300 mm.

The Ybbsitz Knife Market has very happy to have Achim Wirtz as a distinguished guest. He presented this
traditional Hunter, with a blade from basket weave Mosaic Damascus and handle from the same Damascus
and Sambar stag. 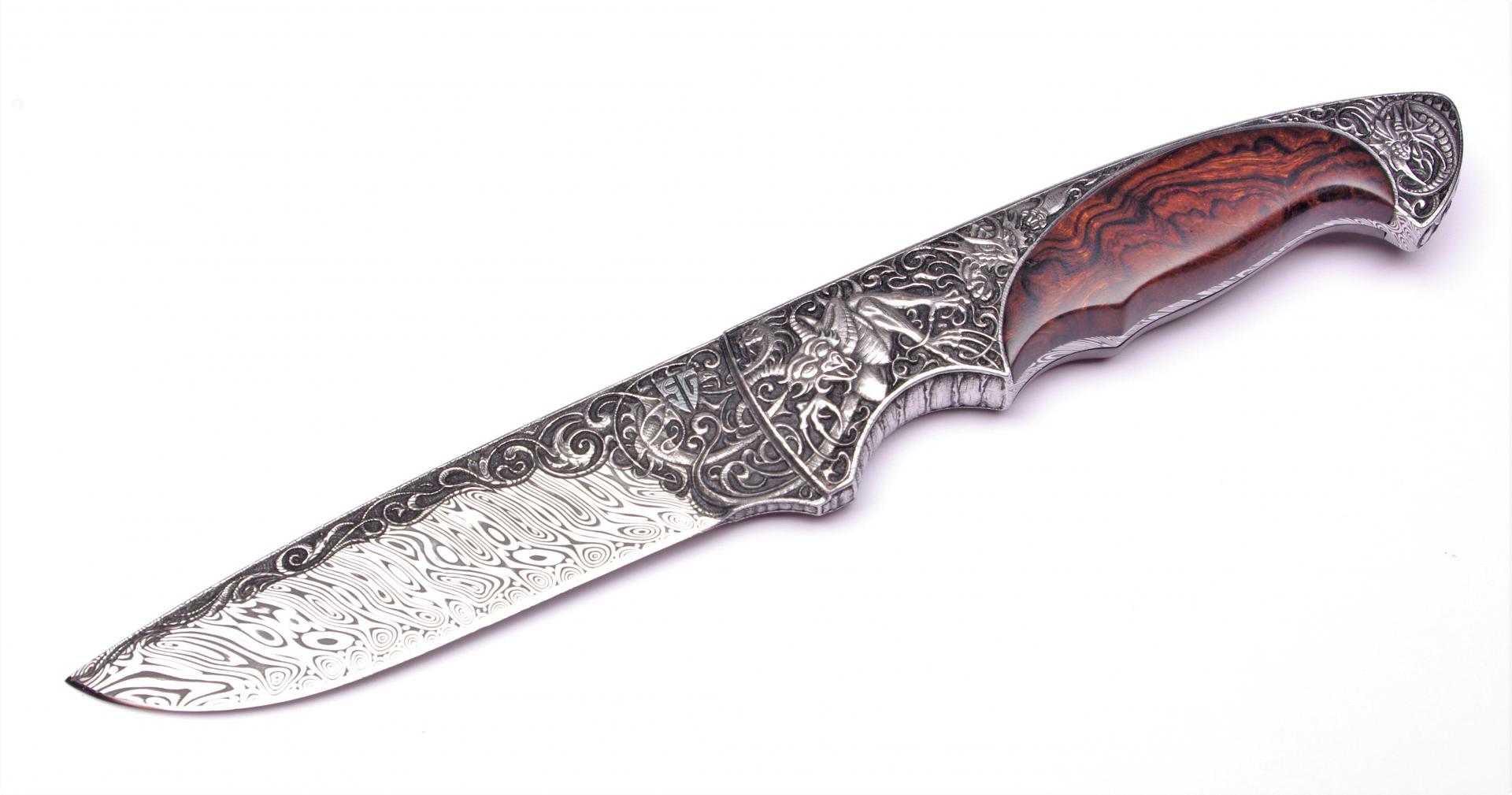 Austrian knife maker Stefan Gobec, from ‘Messerschmiede Gobec OG’ showed this ‘Drachen’ (Dragon).
The full integral knife has a Damasteel blade and Desert Ironwood handle. The engraving was done at
Jagdwaffen Herbert Scheiring in Ferlach. The overall length of the knife is 218 mm.

The ‘Zubr’ by Russian knife maker Aleksander Marushin. The 130 mm blade is Damascus, the handle is
stabilised Birch and Moose stag with scrimshaw.

Austrian knife maker Karl Schmidt showed this ‘Norsk’. The Puukko has a blade from 180 layer of torsion
Damascus (1.2419.05 and 75Ni8) and a handle made from Ebony, Walrus Ivory and Nickel Silver.

A Bowie by Austrian maker Alois Hammer (Hammerknives). The blade is 216 layers Damascus with a
Böhler K990 core. The handle is Desert Ironwood with a brass guard. 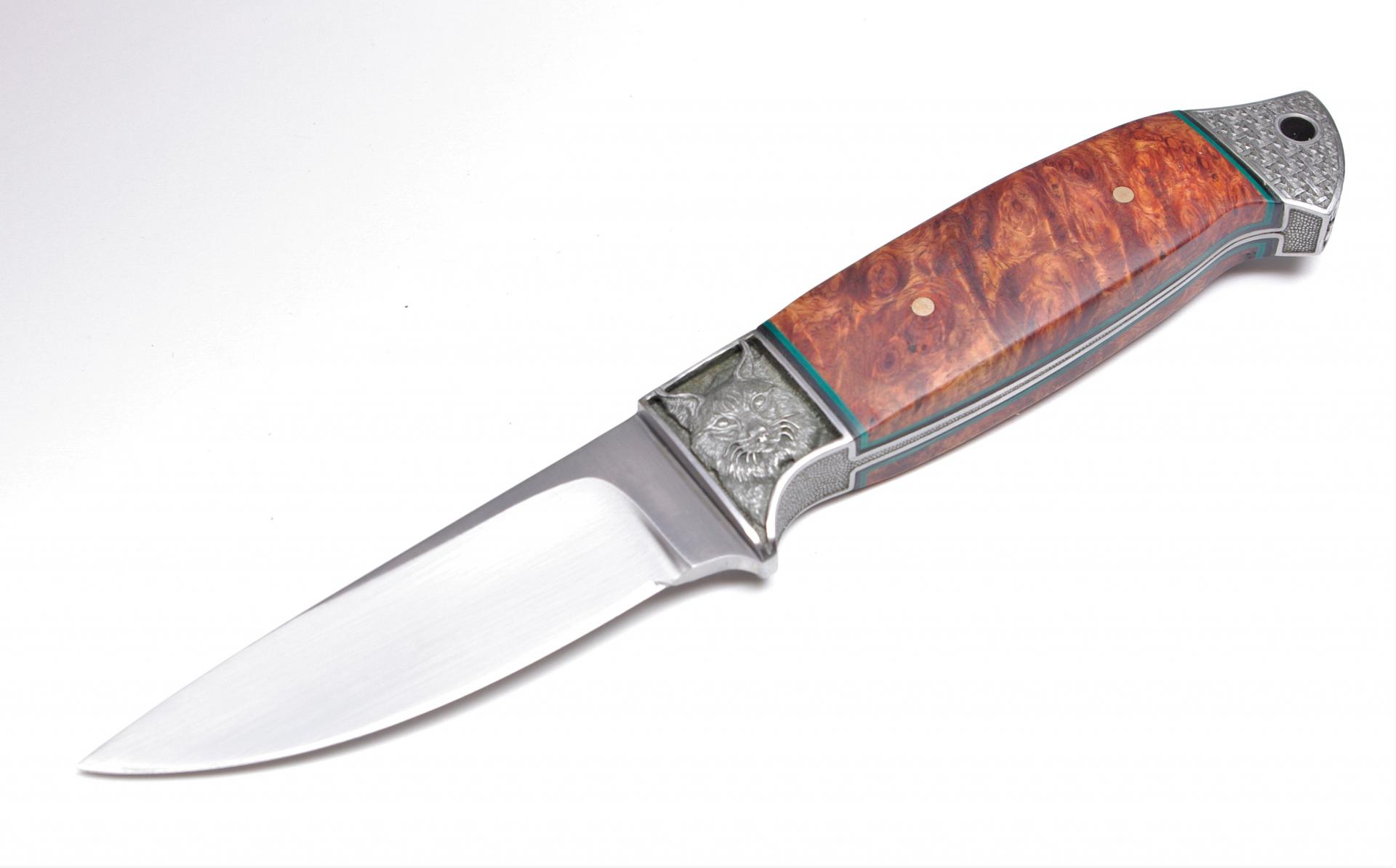 René Funk is e German engraver and knife maker. This is a nice example of his work. The knife has an
RWL 34 blade and stabilised Maple scales. The engravings show animals, basket weave and leaves.

A hunting knife by Oleg Kamilov. The blade is laminated Damascus, the handles are stabilized Palm wood.

A fixed blade by Austrian maker Andreas Holzer. The blade is Damasteel, the handle is Warthog tooth
with scrimshaw of an owl.

Austrians Florian Grosinger (Bachschmied) and Reinis Stripnicks work together. Florian makes knives,
Reinis engraves them. This nice example has a N690 blade and Titanium handles. The overall length is
185 mm.

A classic ‘Jagdnicker’ hunting knife by Austrian maker Alois Reiterer. The blade is Damask, the handle
Deer stag. The overall length is 65 mm.

A drop point Hunter by German maker Richard Spitzl. The blade is RWL34, the handle is burnished and
structured Waterbuffalo horn. The overall length of the knife is 220 mm. An interesting detail is the pin-up girl,
who can be admired from both sides

A wonderful fixed blade by German knife maker Johann Birchner. The steel is Torsion Damask and V Damask,
the handle has subtle scrimshaw of a drinking deer.

An elegant kitchen knife by Austrian maker Bernd Rutzinger (Almspitz). The blade is N685, the handle is
Wenge wood.

Kundera Blades from the Cezeh Republic presented this ‘Old Bastard’. The knife has a selectively hardened
19191 steel blade, and a burned Ash handle. The sheath is water snake skin.

A hunting knife by Austrian goldsmith and knife maker Ralf Röll. The blade is Damask, the handle is
sterling silver and Poplar burl. 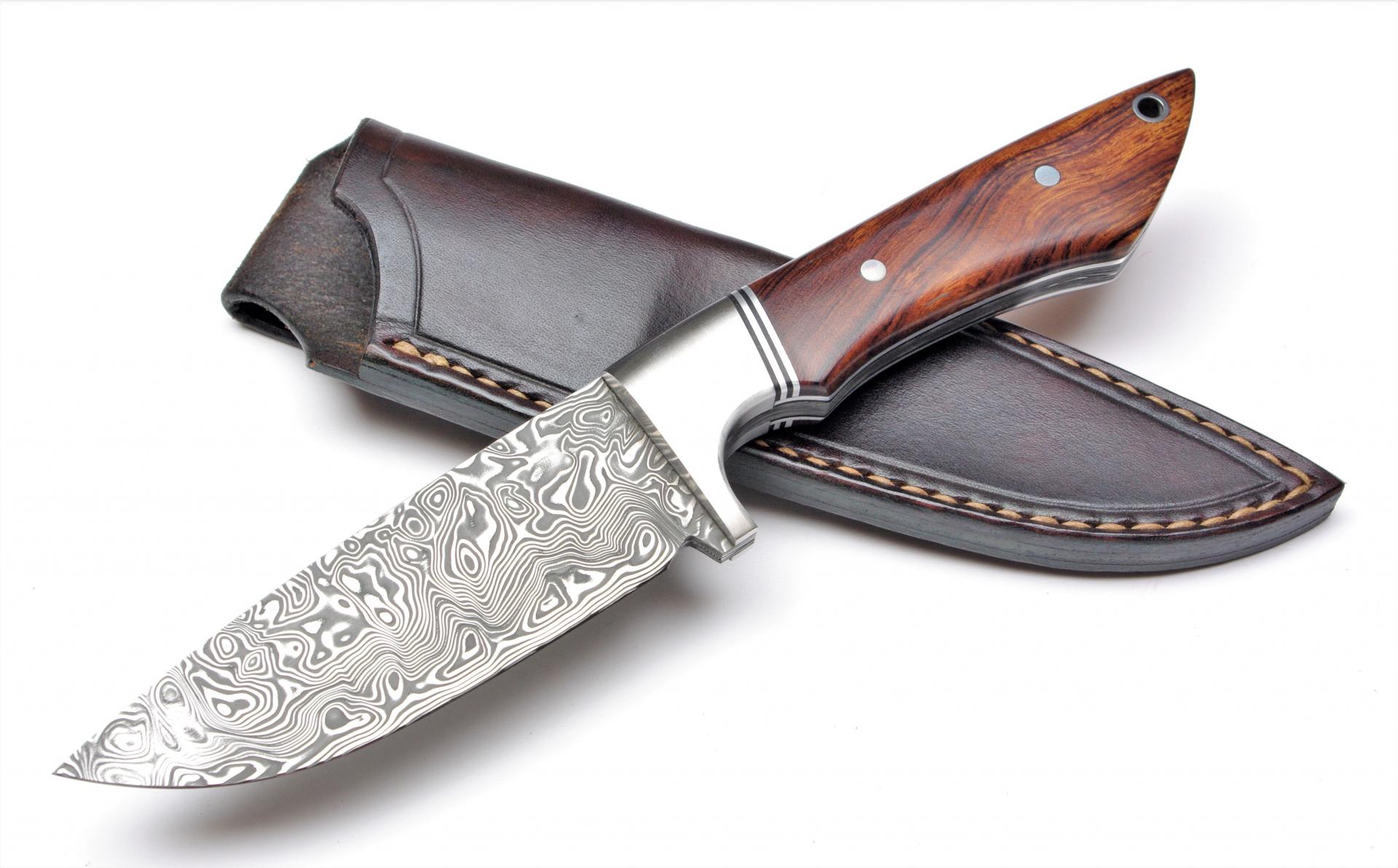 Austrian knife maker Dieter Schmidt presented this ‘RS I’. The blade is Damasteel Vinland, the handle material
is a combination of stainless steel, aluminium, G10 and Desert Ironwood. The overall length is ca. 22 cm.

The ‘Barbecue Macho’ by Michael Blank. The knife has a W1 blade and Reindeer horn handle. It comes
with a Plum wood ‘sheath’ with an integrated knife rest. The piece of stag lock the blade in place when
inside the holder, and simultaneously serves as a rest, as shown.

Austrian Siegfried Hattinger made this impressive Western Bowie. The blade is 1.2379 Böhler steel, the
handle is Austrian deer stag with stainless 1.4116. The sheath is made from cow neck leather with a
handmade stainless steel button.
Our sponsors
Advertisements
Dit is een geprinte versie van de publicatie op