Knife Show
Valdobbiadene 2017
In the heart of the Prosecco vineyards lies the Italian town of Valdobbiadene. It is known, not only for producing the largest ‘britola’ in the world, but because it organizes an annual exhibition for handcrafted knives.

The ‘britola’ is known in Britain as the type of knife used in gardening as either a pruning knife or gardening knife. In Valdobbiadene – and around all Northern Italy – it has different names but the same shape and it is the ideal tool for caring for the vines. A farmer from Veneto does not leave his home without his britola.
Every year the organisers of the Valdobbiadene knife show exhibit a new gigantic object. They have already produced the largest britola in the world; last year it was a six-meter-high bunch of grapes; this year they put up a huge wooden picture frame which could be filled … with everything / by anything. Naturally, in the land of wine people are cheerful and imaginative.
The Valdobbiadene knife show is held every year in early March. Unfortunately, this often coincides with the IWA trade fair in Nuremberg, so it is not always easy for journalists to visit the show. The quality of the knives is diverse, ranging from artisans who have just completed their first knives to authentic Masters. This year there were fifty participants and we selected the knives that, in our opinion, are some of the better exhibited knives. 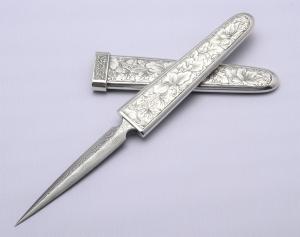