The Brouwer Folder was designed by Dutch custom knife maker Jerry Brouwer. He explains the details of his knife, and how it came to a collaboration with Spyderco.

The Spyderco Brouwer Folder, based on a design by Dutch custom
knife maker Jerry Brouwer.

The Brouwer Folder is based on Jerry’s model Flanker, a framelock folding knife. It was his first folder, and as customary for Jerry Brouwer, it was designed and made with the utmost precision. He wanted it to be a small but robust everyday-carry knife. His personal EDC at the time was the Spyderco Native, but being a knife maker himself, he wanted some small changes here, a different twist there and, and he says, “before you know it you have a whole new knife”.

The Brouwer Folder is a frame lock folder, with the lock in the titanium side of the handle. 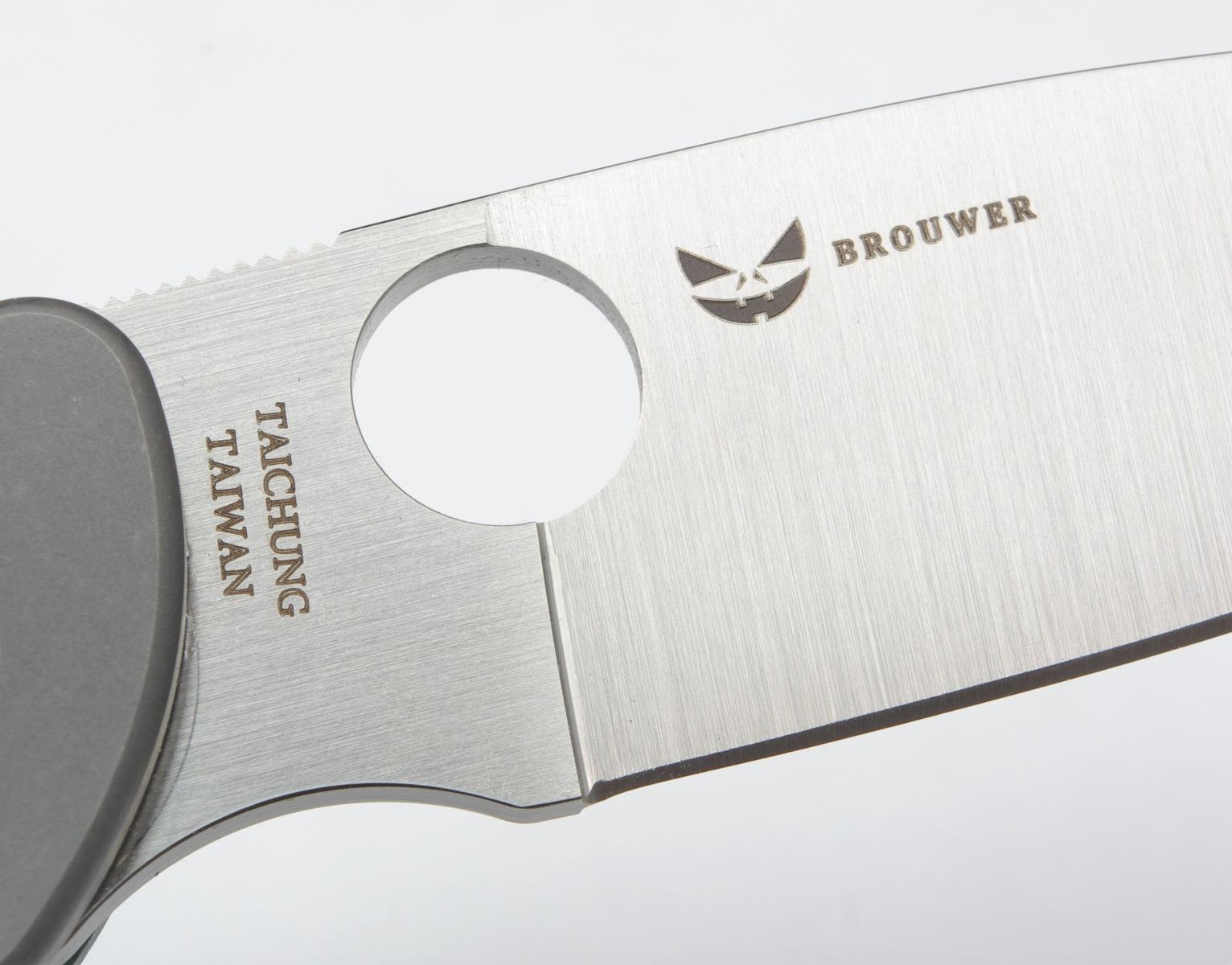 Left: On several knife forums, Jerry Brouwer calls himself Halloween. Hence his logo, of a carved pumpkin.
The Brouwer Folder has it on the right side of the blade.
Right: The Reeve Integral Lock has a stainless steel interface, which doubles as an overtravel stop.
In American Football, the Flanker is the man who ensures that the player with the ball can run forward as much as possible. He acts like a sort of bodyguard. But Flanker is also the NATO designation for the Soviet Sukhoi 27 fighter aircraft. So if you look for ‘Flanker’ on the Internet, almost all hits you get are Soviet jetfighters – which is why Spyderco may have passed that name.
Jerry built his Flanker with different types of blades: Tanto, Hissatsu (a Tanto with a long point), chisel ground, etc. In early 2015, just before the annual Spyderco meet in Amsterdam, he had finished an example with a full flat ground spear point blade, with a Spyderco round hole. He had shared some pictures of this model on different forums.

The prototype of Jerry Brouwers’ Flanker, showing some details of the construction.
During the meet there was a moment when the visitors could come up to the table, to have a closer look at Spyderco’s prototypes, and discuss them with Eric Glesser. Next to Jerry was a Belgian knife collector, Nicolaas Volckaerts, who asked if Jerry had brought the knife he had shown on the forums. Jerry gave him the knife, and Volckaerts showed it to Eric, saying “I think you should take a look at this”.
Eric Glesser studied the knife briefly, asked if he could keep it, and put it on the table. That same day it was presented to the participants, together with the other prototypes. Jerry couldn’t be happier. Well, maybe he could, as his Flanker eventually became a Spyderco production model, the Brouwer Folder, which was introduced in 2018.

The left side of the handle has a textured green G-10 scale with a skeletonized stainless liner.
There are some differences between the custom knife and the production model. First, there is the clip. The custom version has a titanium clip, for tip-up carry, at the right hand side of the frame. The Flanker clip is mounted in a recessed pocket in the frame and fastened with one screw, like the Chris Reeve Sebenza. The production version Folder has a reversible Spyderco hourglass clip, fastened with three screws. The second major difference is that the blade of the Flanker protrudes from the rear of the frame when the knife is closed. This way, it serves as a glass breaker as well. With the Brouwer Folder, the rear of the blade is flush with the frame.
Apart from these differences, the Brouwer Folder captures the lines and excellent handling characteristics of the original quite good. The CPM S30V blade measures 72 mm and the knife weighs only 79 grams, making it a convenient EDC. 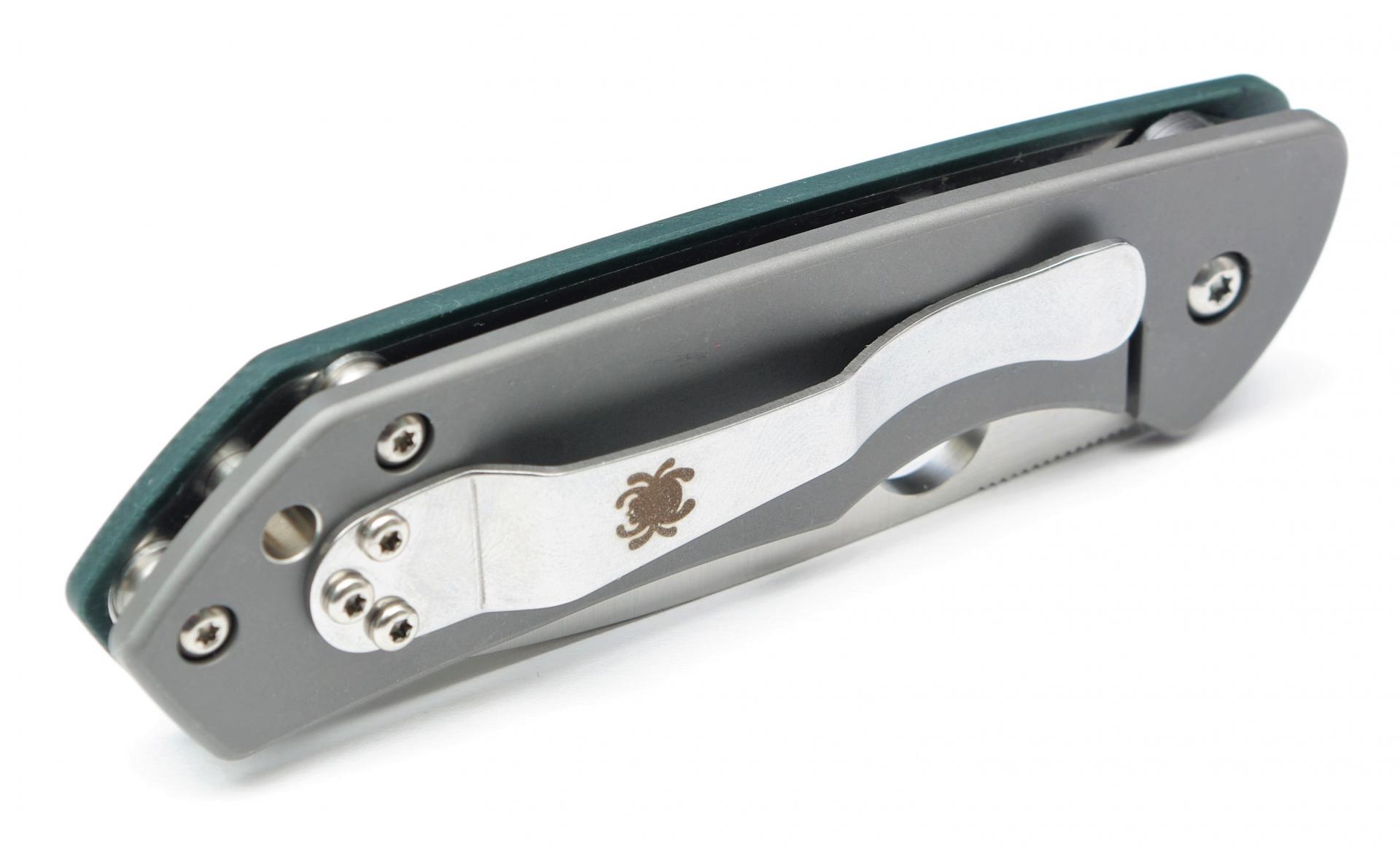