The Rascal by Tim Bernard

French knife maker Tim Bernard (Névé) has designed a knife for the German company Tools for Gents, of which one hundred pieces will be made. European Blades Mag. explains how this 'Rascal' came into being. 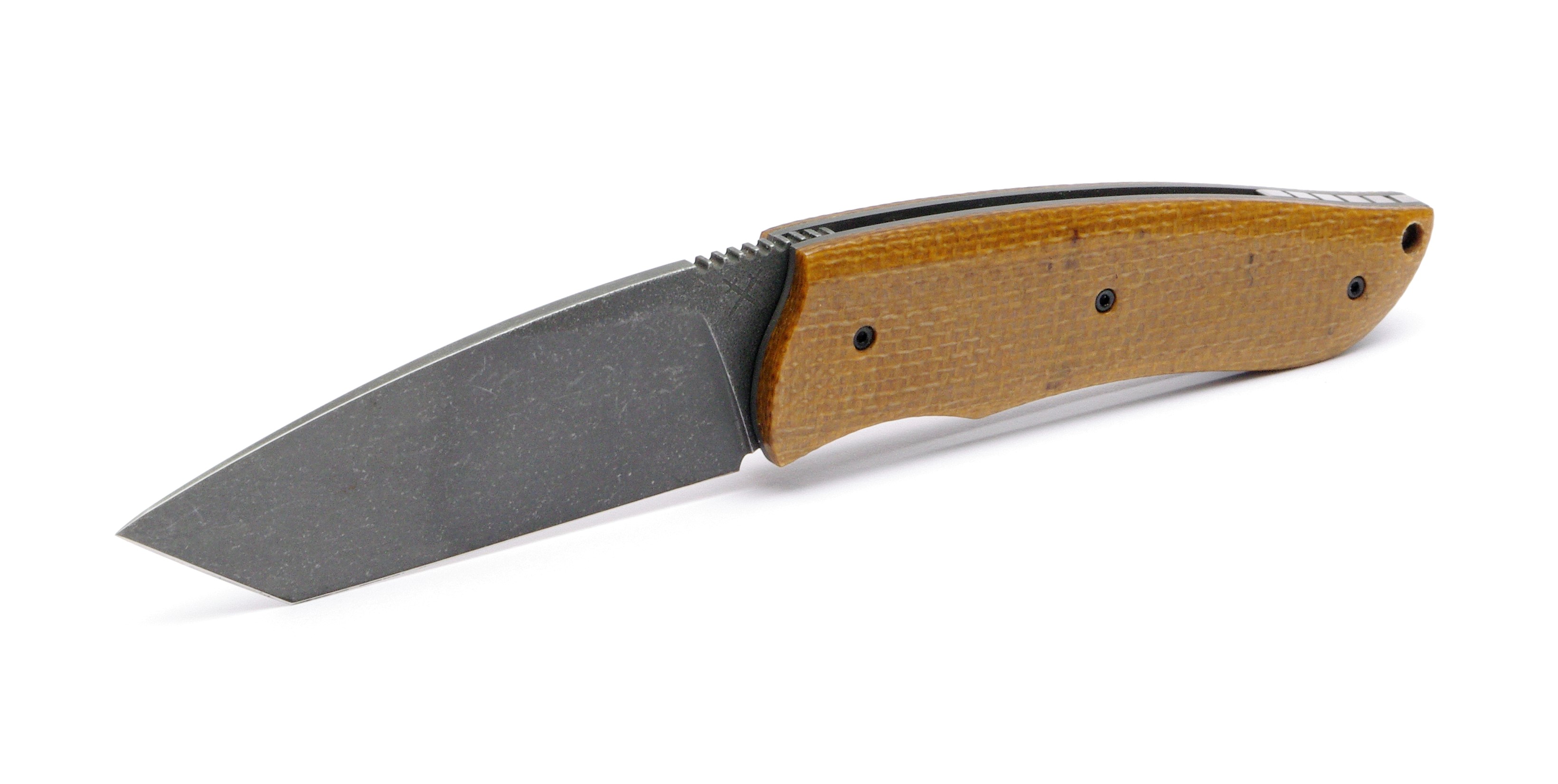 The curve of the blade spine flows into the curve of the handle, which is lightly raised towards the rear.
When discussing custom knives, the common topics are things like materials, quality, and fit and finish. These are, of course, all very important, but before a knifemaker can start working on a knife at all, or make a choice from the available materials, he or she has to know what the knife should look like. In short, a knife starts with a design. This is a world of creativity and inspiration, of pencil and paper, where steel is not yet involved.
The creative ability of people is a rather enigmatic process. Whether it concerns art, literature, architecture or the making of a knife: it starts with an idea that subsequently has to take shape. Sometimes the idea comes naturally, sometimes it takes ages. And then it has to be moulded into the unruly form of reality. To stay with knife makers: the idea must be feasible and manageable, and usable for the purpose for which it was conceived. Many artists and craftsmen have described the process as a kind of flow in which, if everything goes well, the end result is just 'right'. Remarkably enough, that is what often shows. A well-designed knife is a pleasure to the eyes, no matter what it is made from. 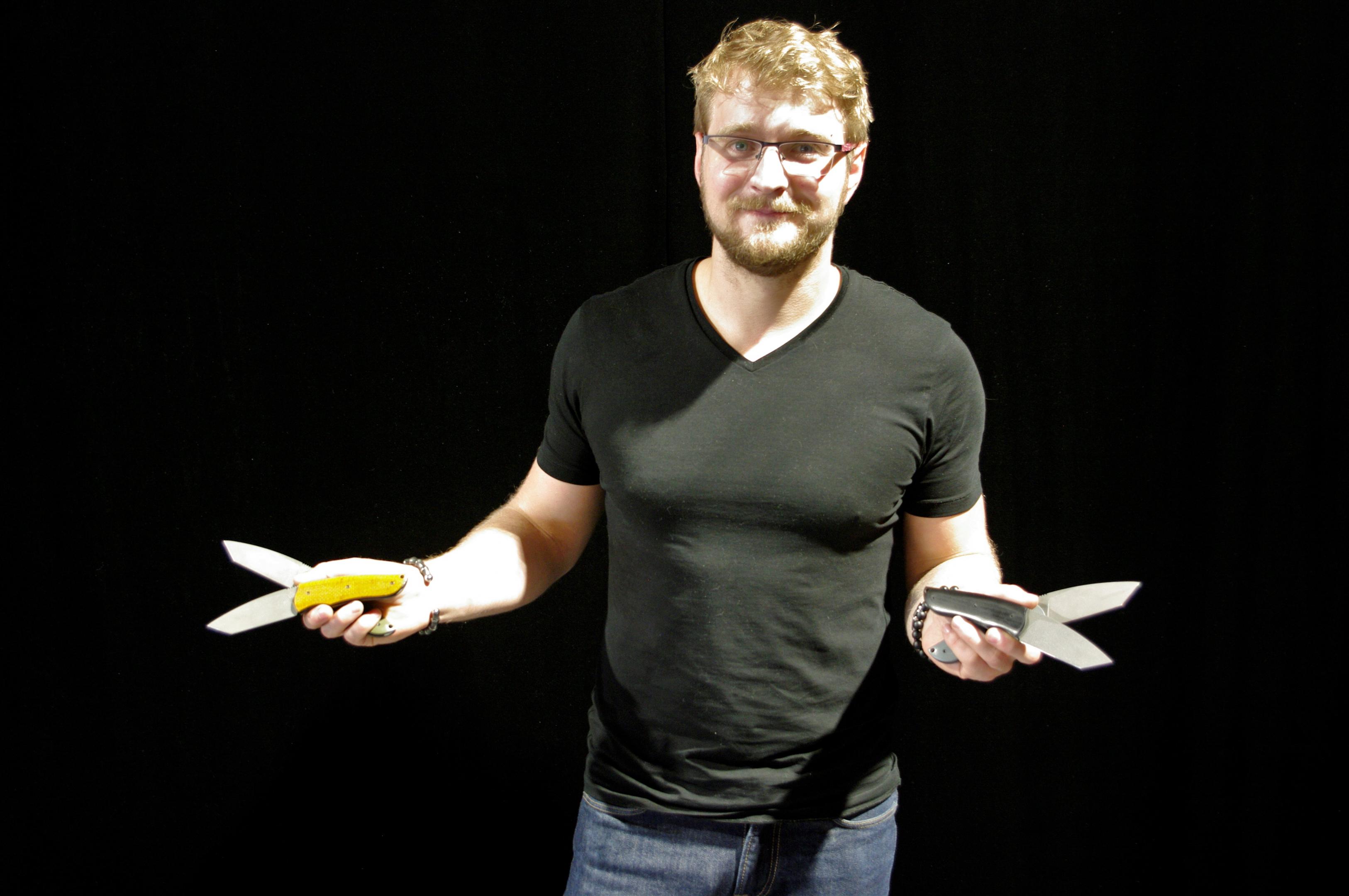 Tim Bernard with the four versions of his 'Rascal'.
Tim Bernard
Tim Bernard is a young French knife maker, with his own company Névé, which is also the name of his most popular knife model. The Névé and Tim's philosophy behind the design have been presented in European Blades Mag. 13. It is one of those knives that almost everyone likes, and that looks good, regardless of the steel or handle materials used.
A while ago, Tim Bernard was asked by the German company Tools for Gents to design an exclusive model of a linerlock folding knife that could be produced semi-industrially. Within predetermined dimensions, Tim had the freedom to create that design. So there he was, staring at a blank piece of paper.
Although many knife makers look at the blade first, Tim Bernard started with the handle. His Névé has a recognisable style, with a handle that curves slightly upwards towards the rear. Tim kept this rounded back, but made the handle a little bigger for a good grip, with a shallow finger groove next to the liner lock.
Based on this handle, Tim experimented with different blade shapes. The final choice fell on a N690 modified Tanto, a blade with the characteristic angled edge, but with a rounded back: almost like a drop-point where a piece of the blade has been cut off.

The spine of the 'Rascal', here in its version with mustard Micarta handle scales. 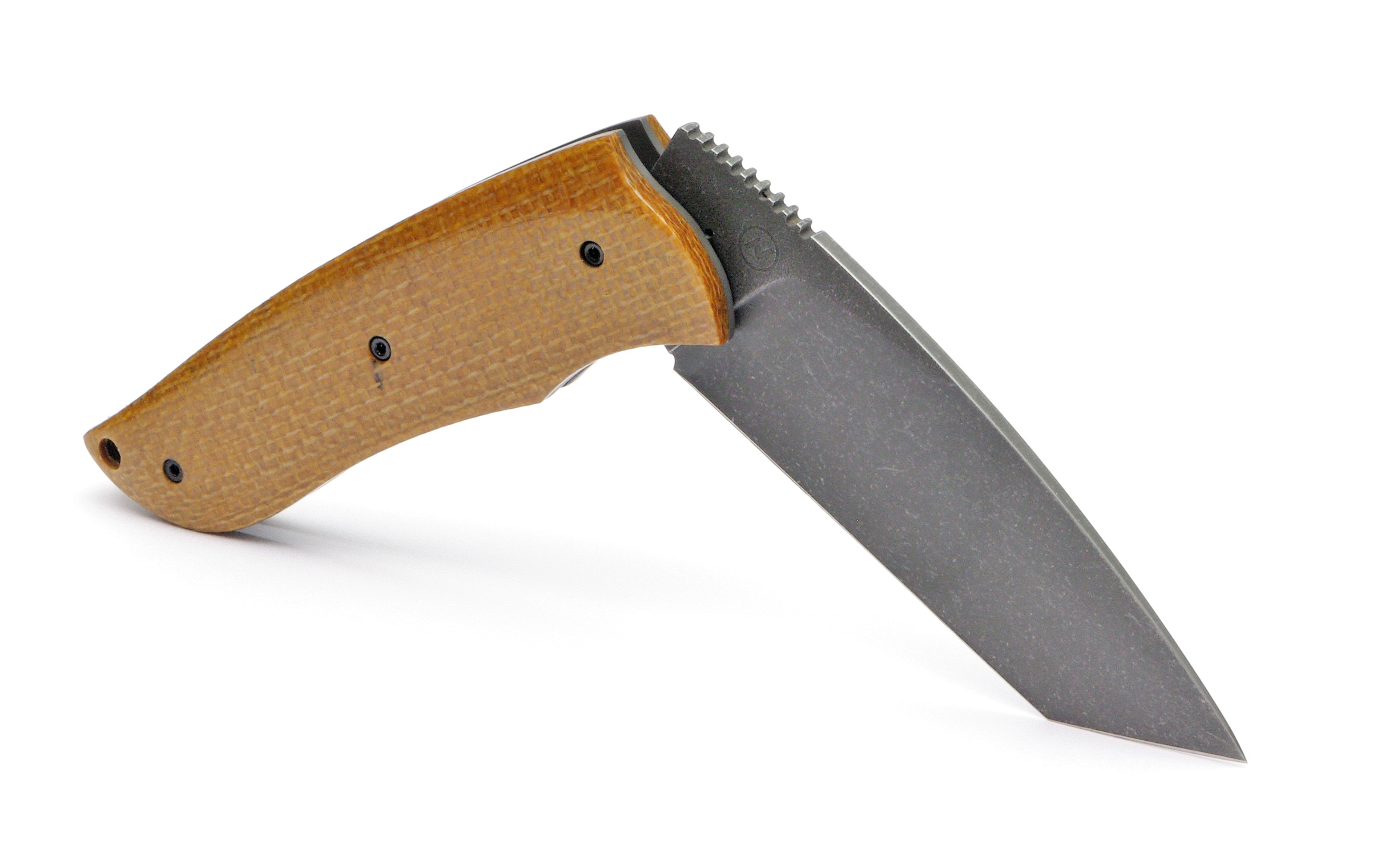 The 'Rascal', partly opened.
The curve of the blade spine flows into the curve of the handle, with the slightly raised handle at the rear as a counterpoint. With the knife closed, the back of the spine protrudes above the handle. There, the spine has transverse grooves and functions as a front flipper to open the blade. There is no nail groove or thumb rest which, in combination with the stonewashed finish, attributes to the austere appearance.
Finally, there were the handle materials. The prototype shown on most of the accompanying pictures has handles of  'mustard Micarta'. The alternative is G10 in grey, green or black. Between these four there is a choice, without too much complications for production.

The one hundred pieces of the 'Rascal' will be made with four different handle scales.
From top to bottom: black G10, grey G10, mustard Micarta and green G10.
Rascal
When the design was finished, the knife had to have a name. Tools for Gents published some pictures of the prototype and asked for suggestions. One of the first to respond was European Blades Mag. associate Christophe Verstappen. The knife reminded him of one of the favourite television series from his childhood, The Little Rascals, and so he suggested the name 'Rascal'. This appealed to both Tim Bernard and Tools for Gents, and thus the knife got its name.
For starters, one hundred Rascals will be made. The parts are produced by the French company Actilam in Thiers, Tim takes care of the fitting, finishing and assembly. If the model is a success, there may be a producer who can make the complete knives.

Left: With the knife closed, the back of the spine protrudes above the handle and serves as a front flipper to open the blade.
Right: The handle curves slightly upwards towards the rear.

Close-up of the liner lock.
Use
The Rascal is a sturdy knife. The blade is 92 mm long, the unfolded knife measures 211 mm. The prototype with the micarta handles weighs 140 grams. Its targeted users reflect that robust look. Tim sees the Rascal as a solid tool, while Tools for Gents tend to look at it from a more tactical angle. Between the two, there is a large group of potential users, who like a knife that can take some action. Whichever way it goes, it looks like the Rascal will find its way. 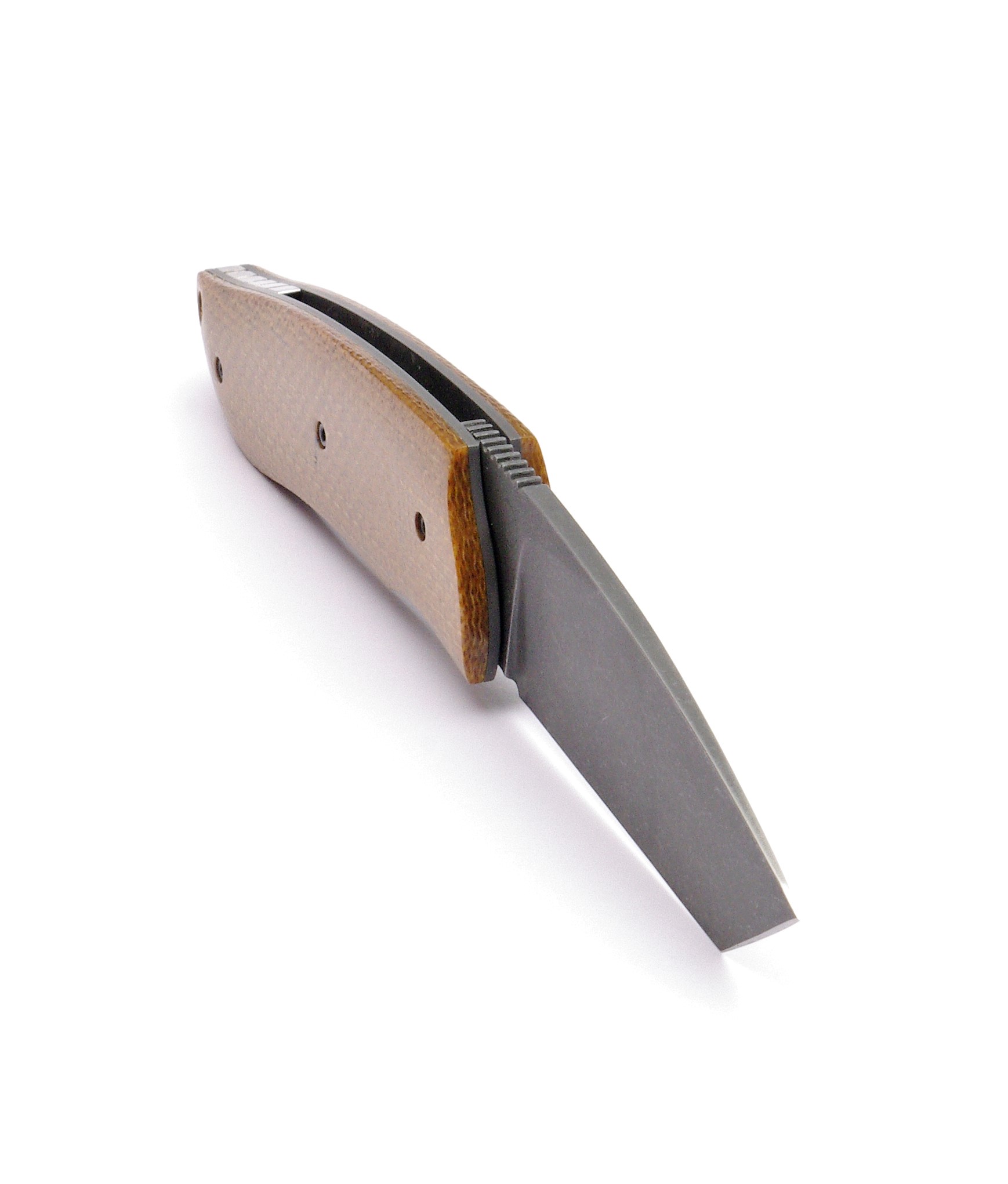 The 'Rascal' is a sturdy knife without being plump.