Neufchâtel-en-Bray, in Normandy, France, hosted the third edition of its knife show. It clearly progressed, with almost double the amount of  exhibitors and several activities.

The sympathetic small show in Normandy has kept its promises. The organisation did everything to provide an interesting weekend in October last year. There were five different activities among which, as promised, demonstrations by François Xavier Charbonnier with his famous Dragon Forge. The “Confrérie du Couté de Tié” (Thiers Brotherhood of Knives) demonstrated the mounting of knives, especially little butter knives for children.

Left: François Xavier Charbonnier and his Dragon Forge. Right: Part of the show floor in Neufchatel.
Good news for the visitors: with fifty participating knife makers, the show almost doubled the amount of exhibitors of the year before. They were almost exclusively French makers, among them some first-time participants, showing a wide range of styles.
The only negative point was the number of visitors, which was clearly less than the previous edition. Maybe because of the beautiful weather of that October weekend, the choice between the beach and a knife show was quickly made. Apart from that, the knife show in Neufchâtel-en-Bray clearly shows promise for the future. 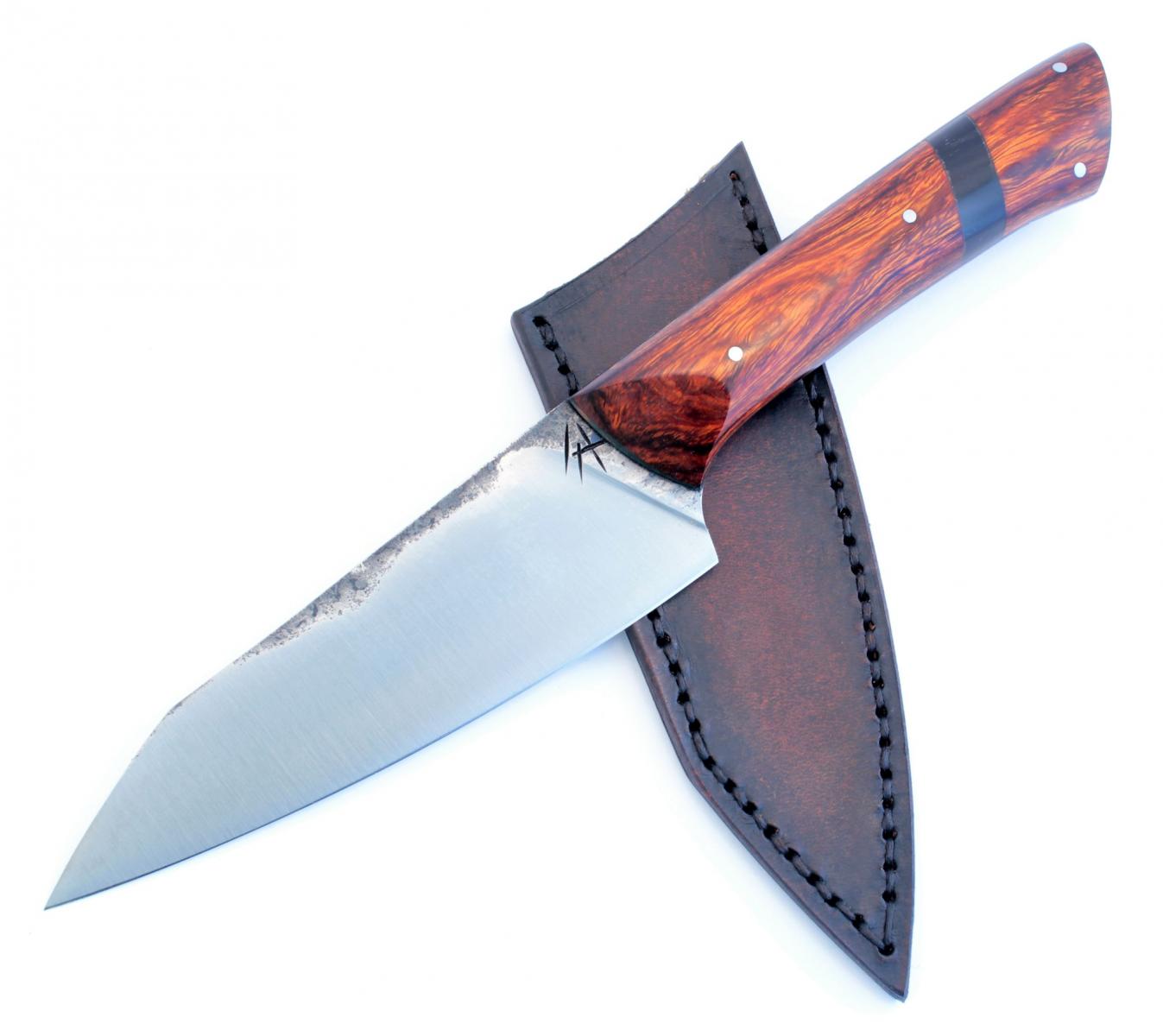 Arthur Lapostat made this Honesuki (boning) knife. The blade is made of 135Cr3 steel,
the handle of Ironwood with an insert of water buffalo. 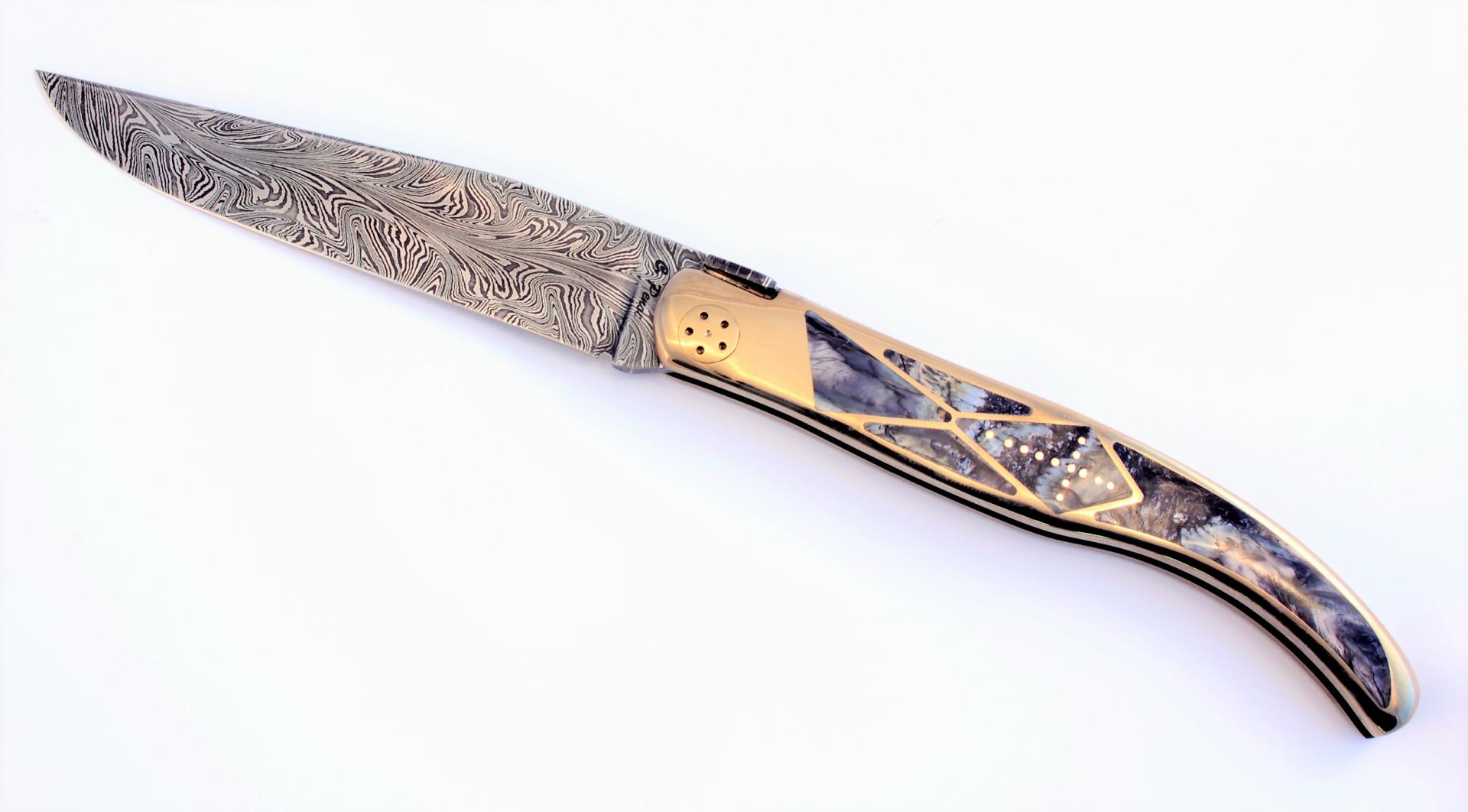 Chistian Penot’s version of the Laguiole 130, with a blade of feather Damascus, and a titanium chassis
with mammoth tooth inserts and O2 nails. 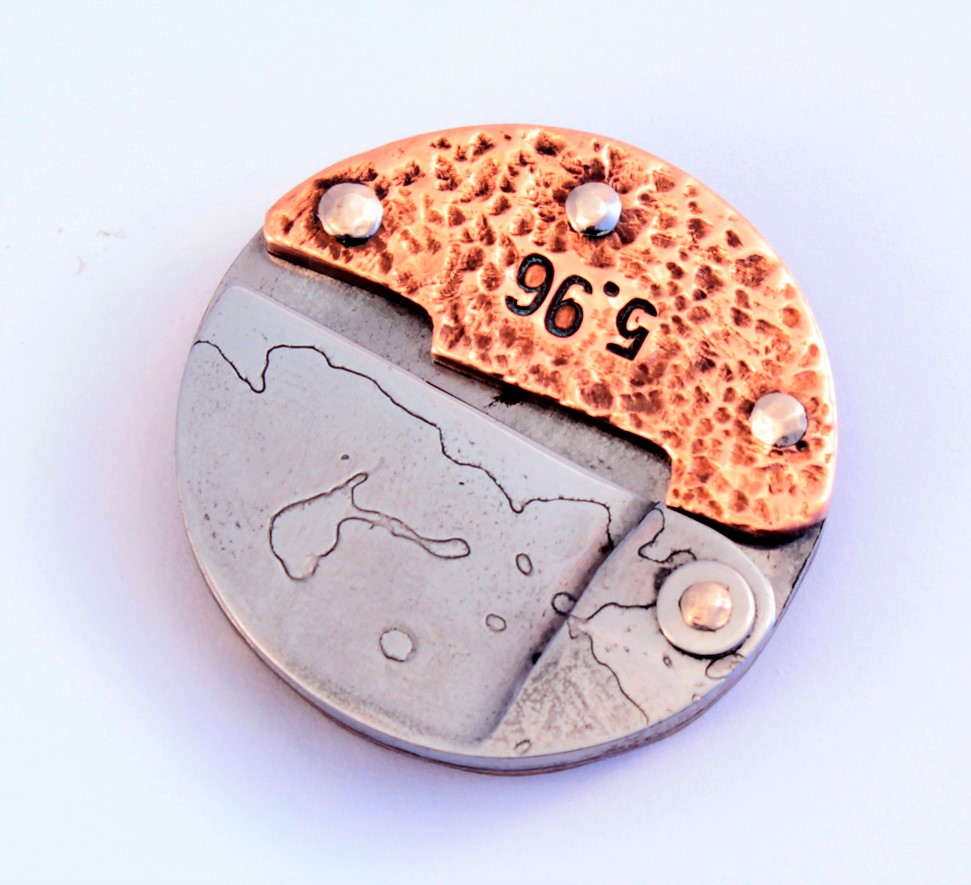 An inconspicuous folding knife by Denis Lagarde. The semi-circular blade is made of XC75, etched by iron perchloride. It is mounted in a frame with different types of wood and epoxy. 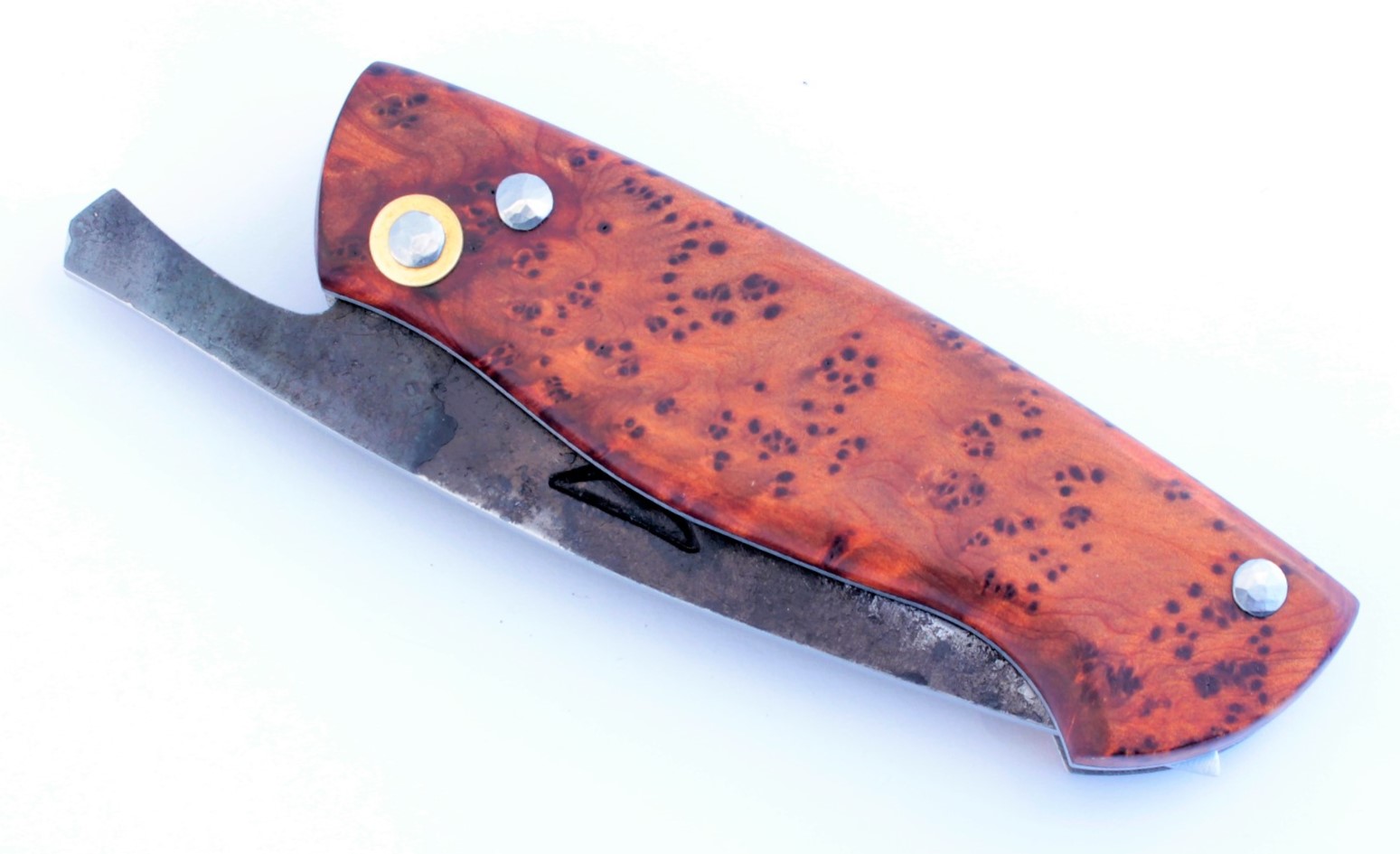 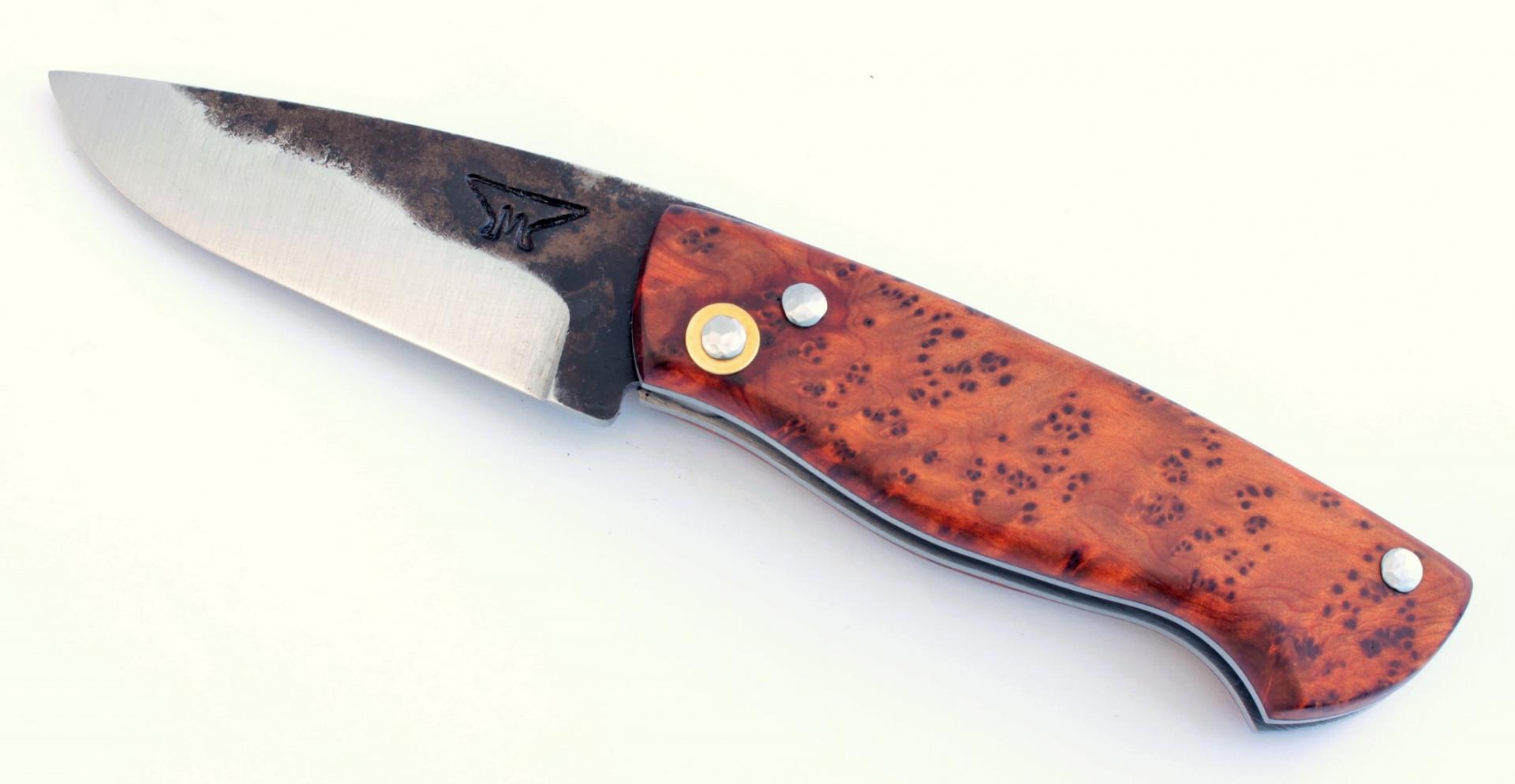 A “Piémontais” by Frédéric Marchand. The blade is made of hand-forged XC75, the scales are
Moroccan cedar wood.

Hervé Maunoury made this combination between a camp knife and a Puukko. The blade is feather
Damascus with a 90mcv8 core. Pommel and guard are made of inox and the handle is  made of Morta
(Bog Oak) and Birch bark. 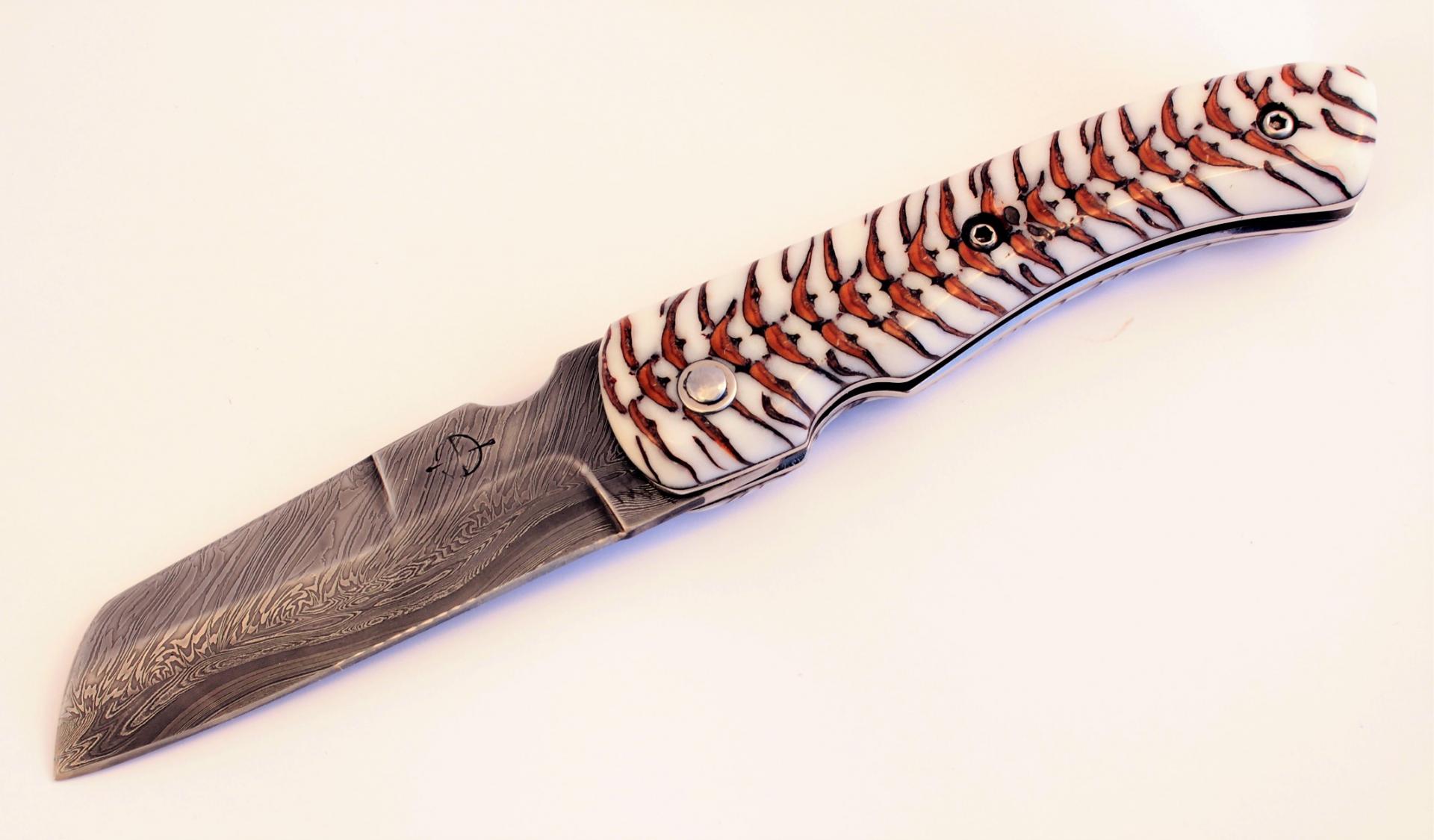 A folding knife by Joris Demarest. The 480 layer Damascus blade has different motifs: torsion, explosion
and a serpent. The liners are Inox Z40c13, the handle has a pinecone motif.

Sometimes knives can make you smile, like this one by Louis Blanchet Kapnist. The blade is homemade
Damascus (90MCV8 and 15N20) and the handle is warthog tooth. 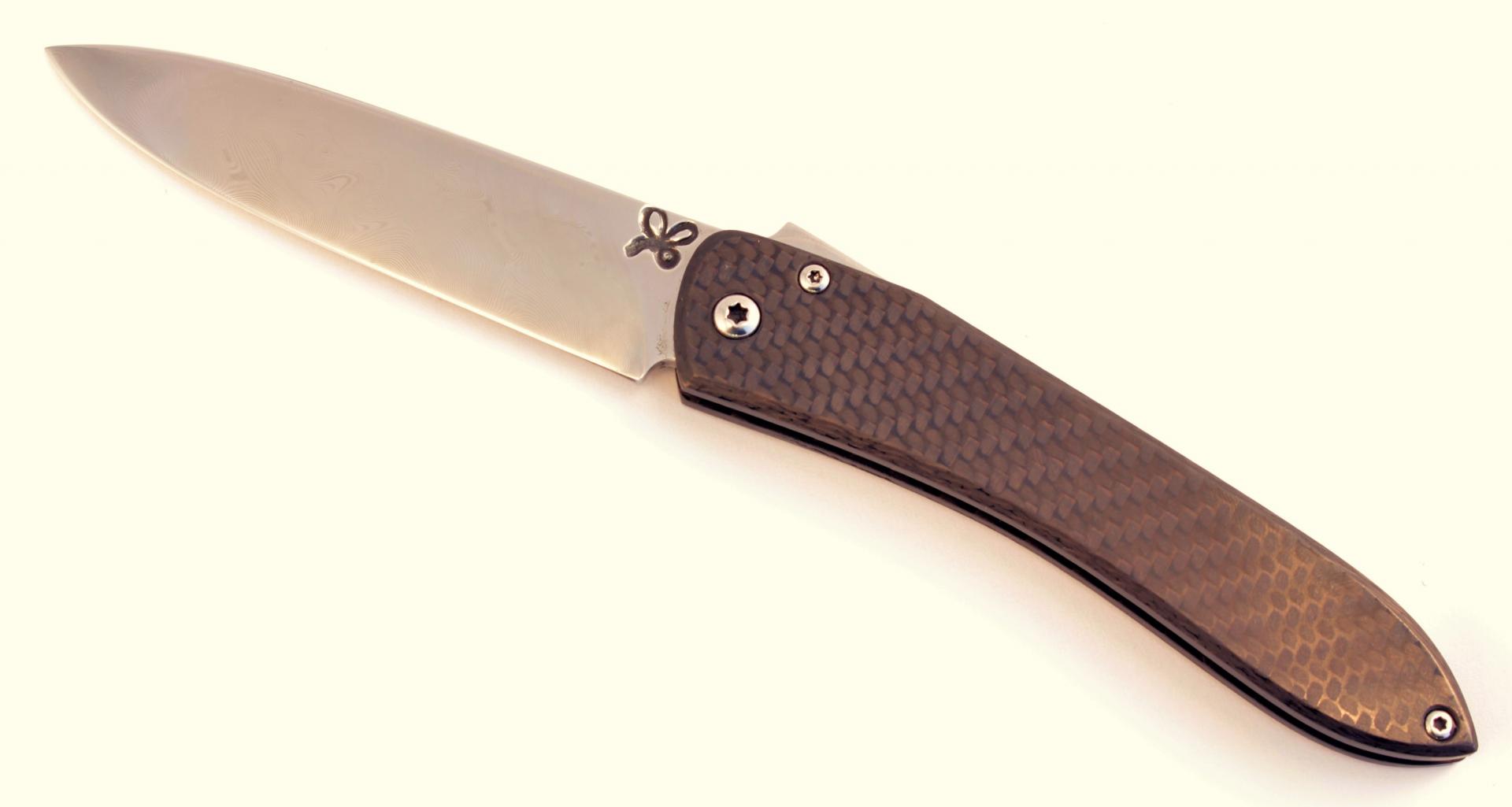 Mathieu Callejon calls this folding knife the Andromeda. The blade is Inox Damascus, the scales are carbon.

The “Right to Hunt” by Pascal Marché. The blade is forged XZ75, selectively hardened, the handle has
a brass guard and is made of blue stabilized stag and blue stabilized giraffe bone.

A kitchen knife by Pierre Hanff. Handle and sheath are made of Elm burl.

Sebastien Dauby (Atelier de Corbeau) made this version of a Karambit. The steel is XC75, the scales
are Morta, or Bog Oak. 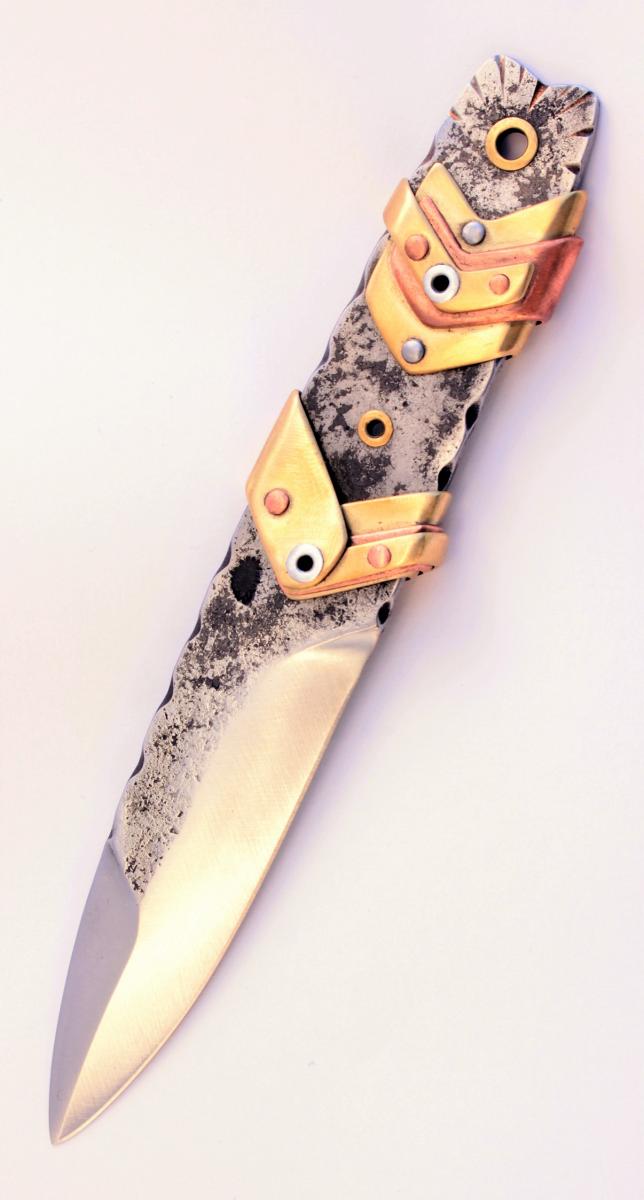 Left: The “Atipa” by Patrice Rélot. The blade and handle are hand forged XC75, decorated with copper and brass.
Right: A fixed blade by Rémy de Champs de Saint-Léger. The blade is made of 14C28N, the scales are black resin with red liners. 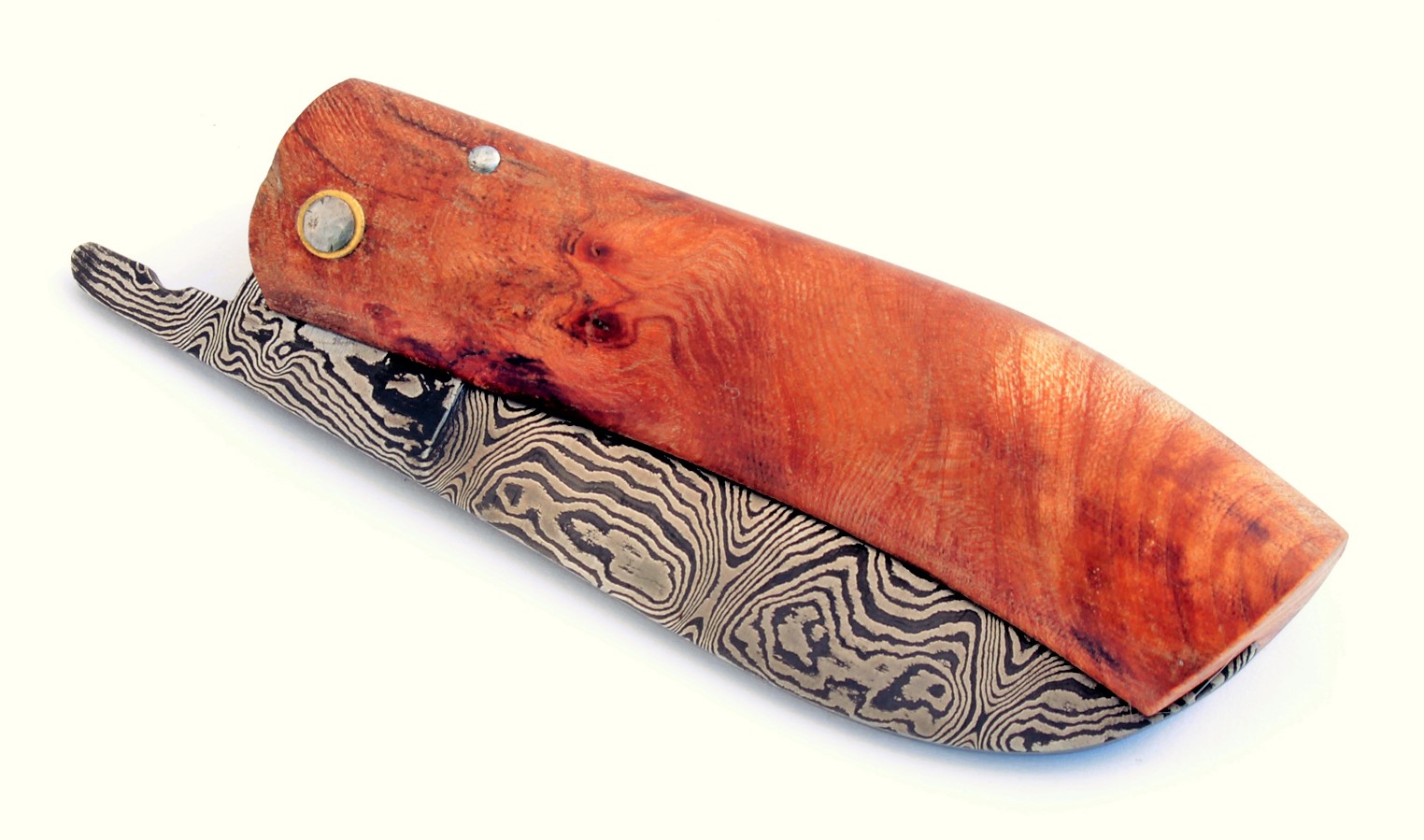 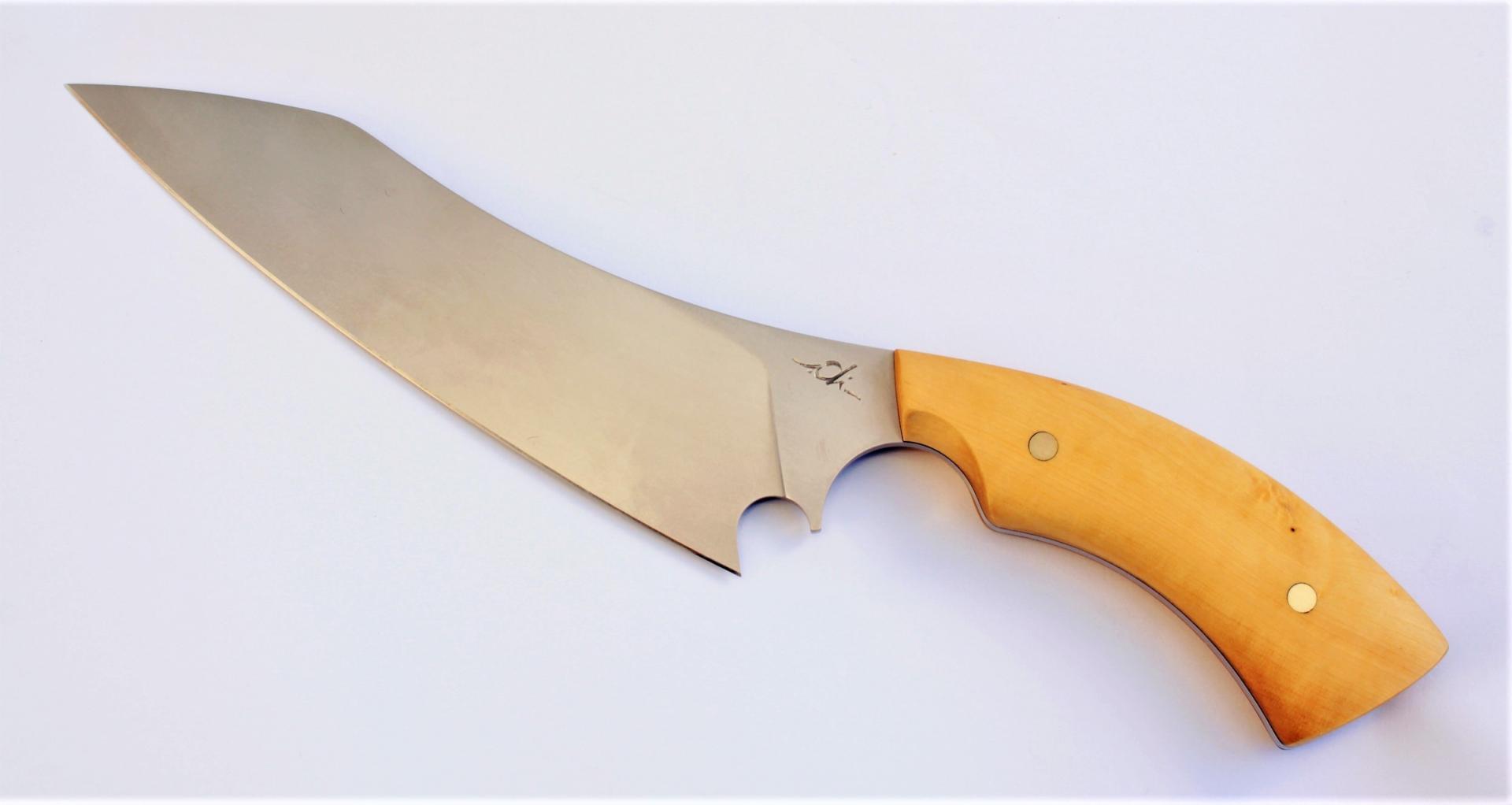 An intriguing kitchen knife by Albin Deloison. The blade is 12C27, the scales Boxwood. The peculiar
shape of the finger grooves makes curious as to its practical use.