The 18th ‘knifemaking days’ of the Belgian Knife Society (BKS), held on November 11 and 12, 2017 in Gembloux, were bigger and better than ever. Of course, it rained – it does so almost every year. The town hall was filled to the brim and the offerings were of high quality and diverse. 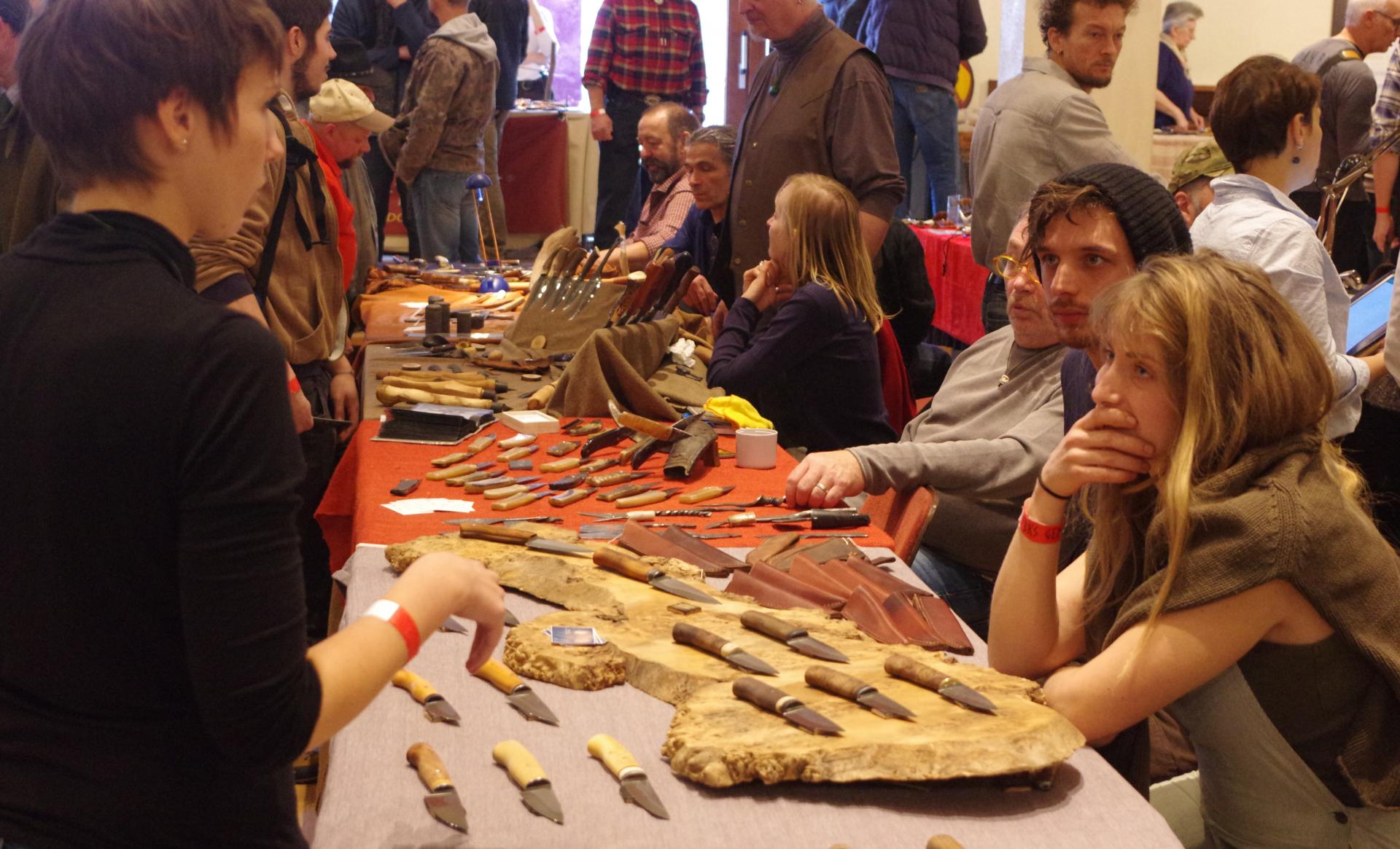 Gembloux featured all types and sizes of knives and knifemakers.
With almost 170 exhibitors and all-together 19 different nationalities, the knife making days of the Belgian Knife Society in Gembloux were bigger and better than ever. Some visitors were waiting at the door as early as 7 AM for the opening of the show at 10. But it was well worth the wait, for some select few doubly-so. The BKS marked the 18th edition by offering the first and 18th visitor a gift coupon of €100 and €50, respectively, to spend at a booth during the show.

Left: The first and the 18th visitor received a gift coupon from the BKS president Tim Wagendorp (second from
the left) and Marc Bauvin from the Gembloux municipality (far right).
Right: Gembloux offers children a chance to try their hand.
The offerings were very diverse this year, and almost of a uniquely of high quality. On the following pages we will show a selection of, among others, knife makers whose work reflected the inspiring theme: Viking swords and axes. 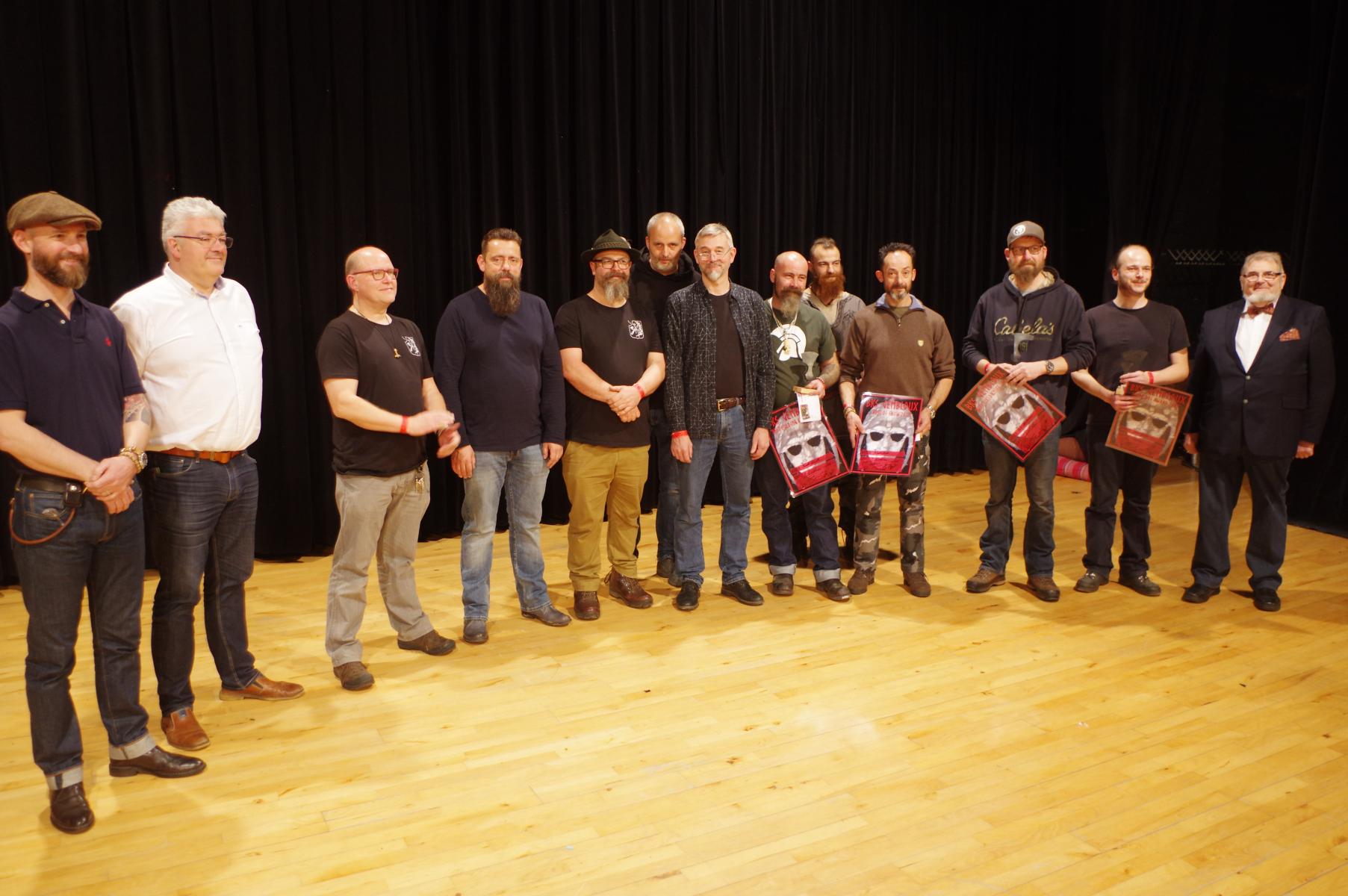 The prize winners with their certificates amidst the members of the jury and representatives of the city of
Gembloux and the BKS. 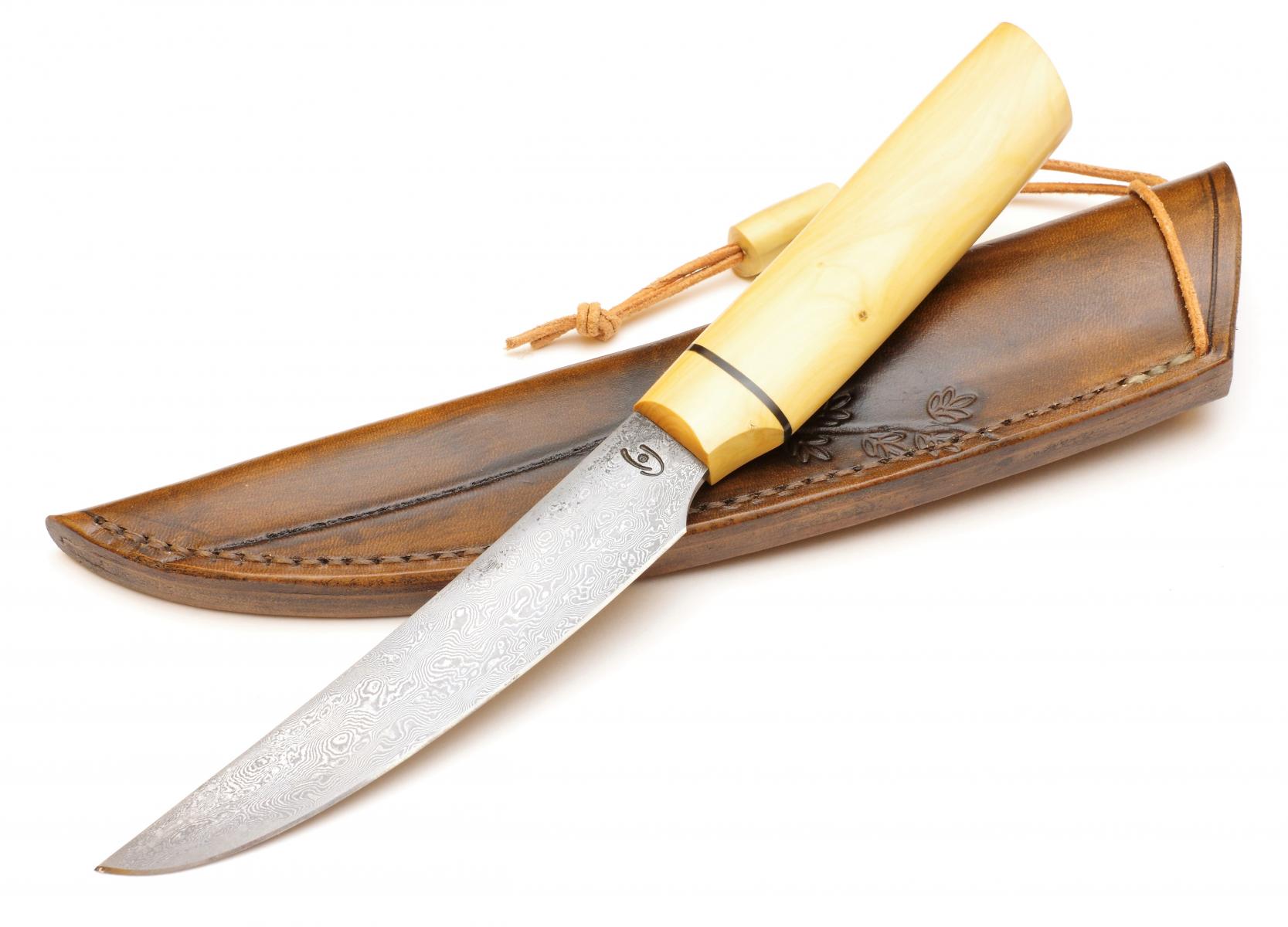 A kwaiken by Jos Wouters. The blade is damask, by Achim Wirtz. The handle is made of Boxwood.
The length of this graceful knife is 24 cm.

Stéphane Uhlen made this straightforward dagger. The blade is XC75, the handle is a combination
of fossil Walrus bone and old iron. 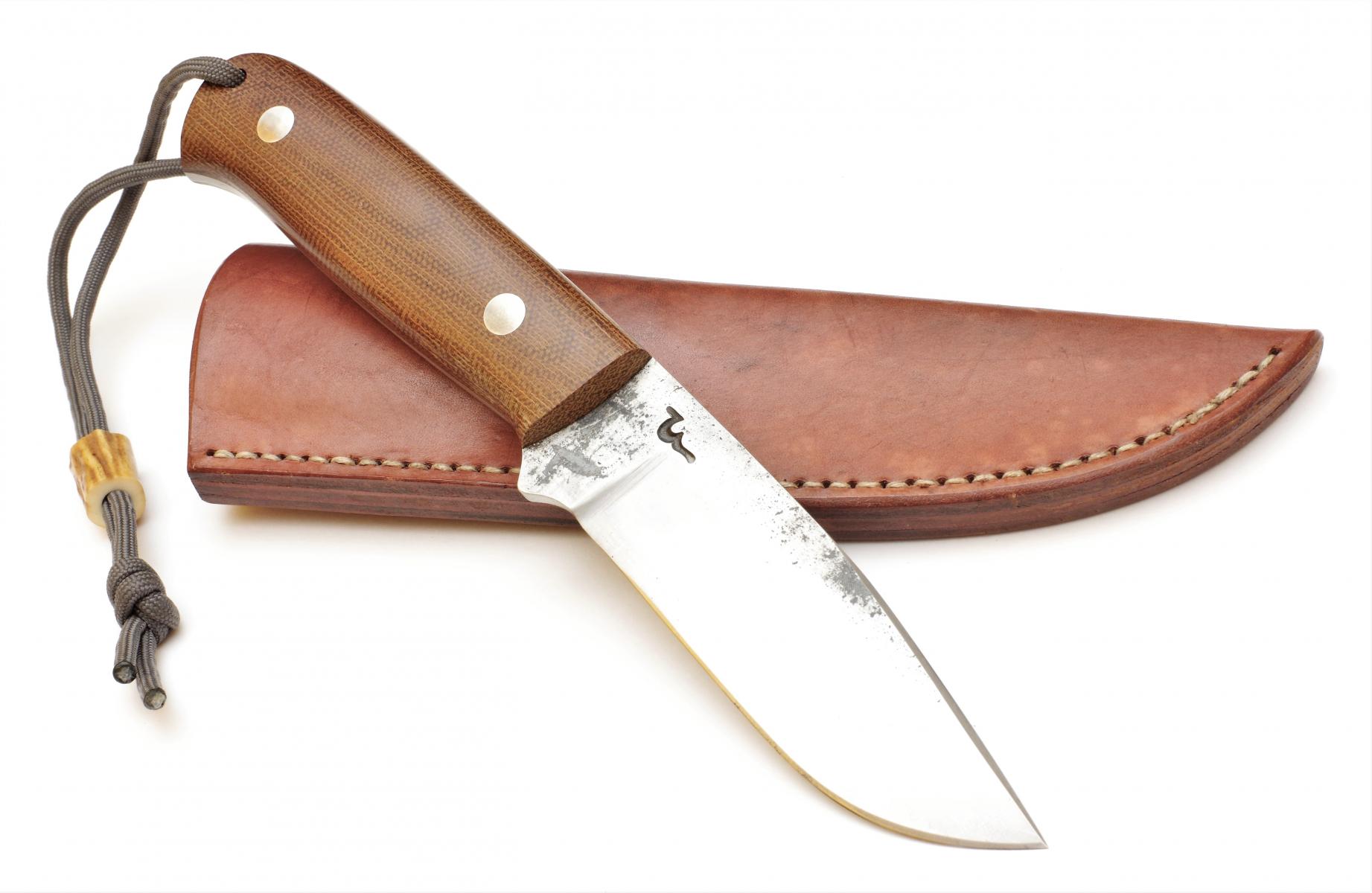 A fixed blade outdoor knife by Tim Wagendorp, with a blade of 521000 ball bearing steel and a handle of micarta.

Belgian ABS Master smith Véronique Laurent made this ‘Victoria’, a takedown Bowie. The blade is
90MC08 and 45NCD16 damask with an anemone motif. The grip is relieved ebony. The ‘Victoria’
measures 43.5 cm. The sheath is made of stingray skin. 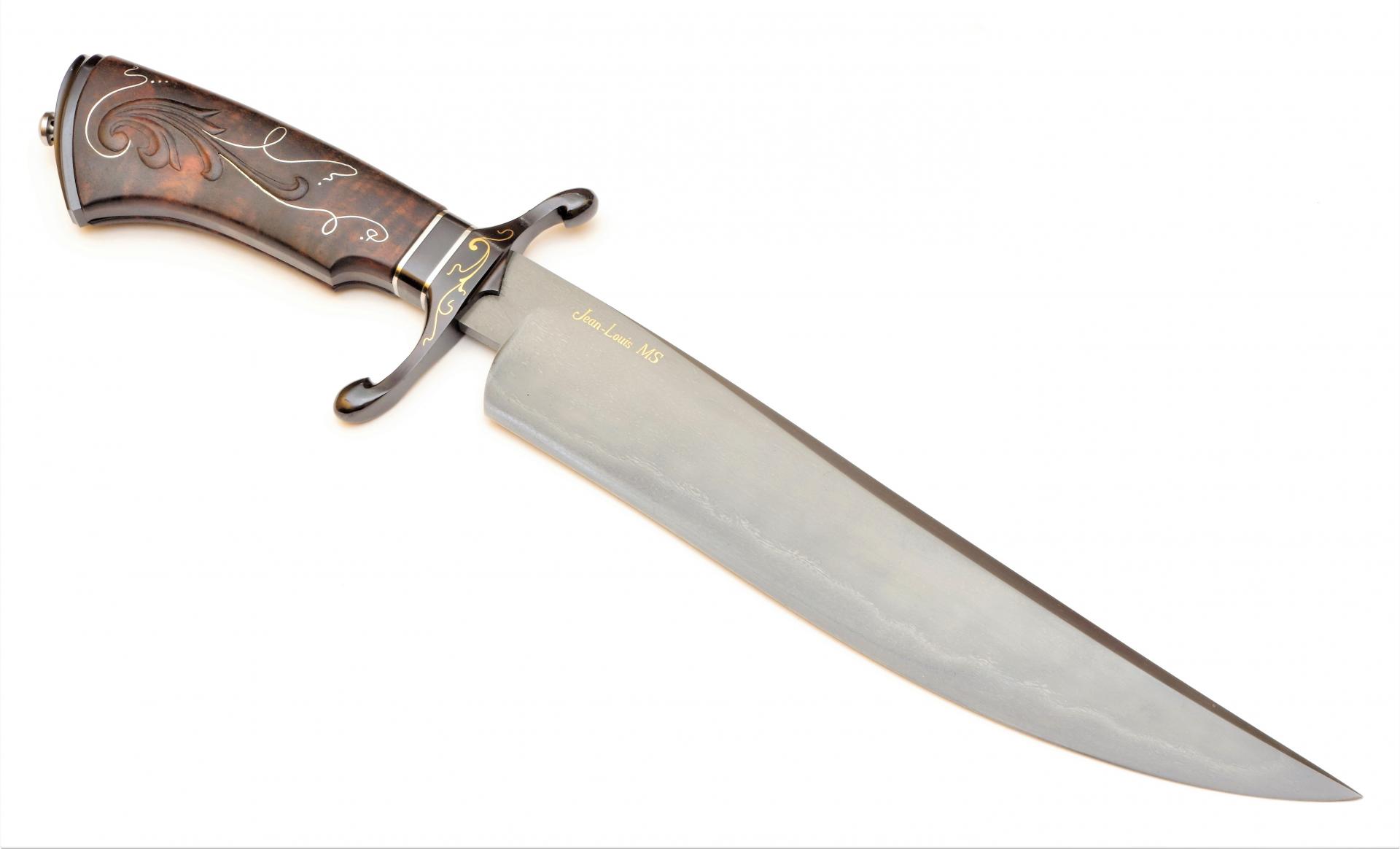 A takedown Bowie by French ABS Master smith Jean Louis Regel. The blade is Wootz, the handle is
carved walnut with a silver inlay. Guard and pommel have been inlaid with 24k gold. The length of this
Bowie is 40.6 cm. 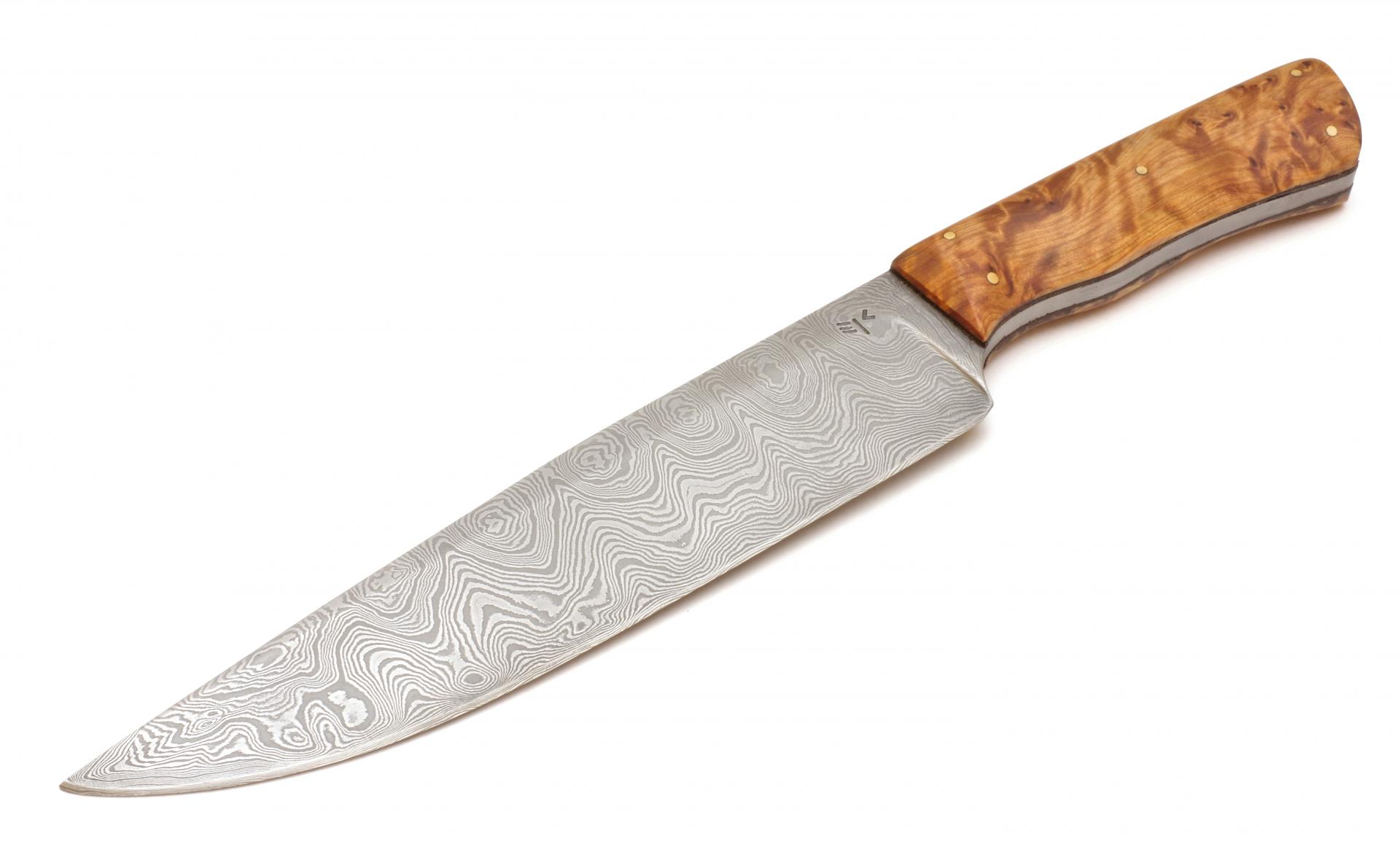 A knife by Sebastien Ponto. The blade is 15N20 and 90MCV8 damask. The handle is Thuya wood
with leather liners. The overall length is 31.6cm. 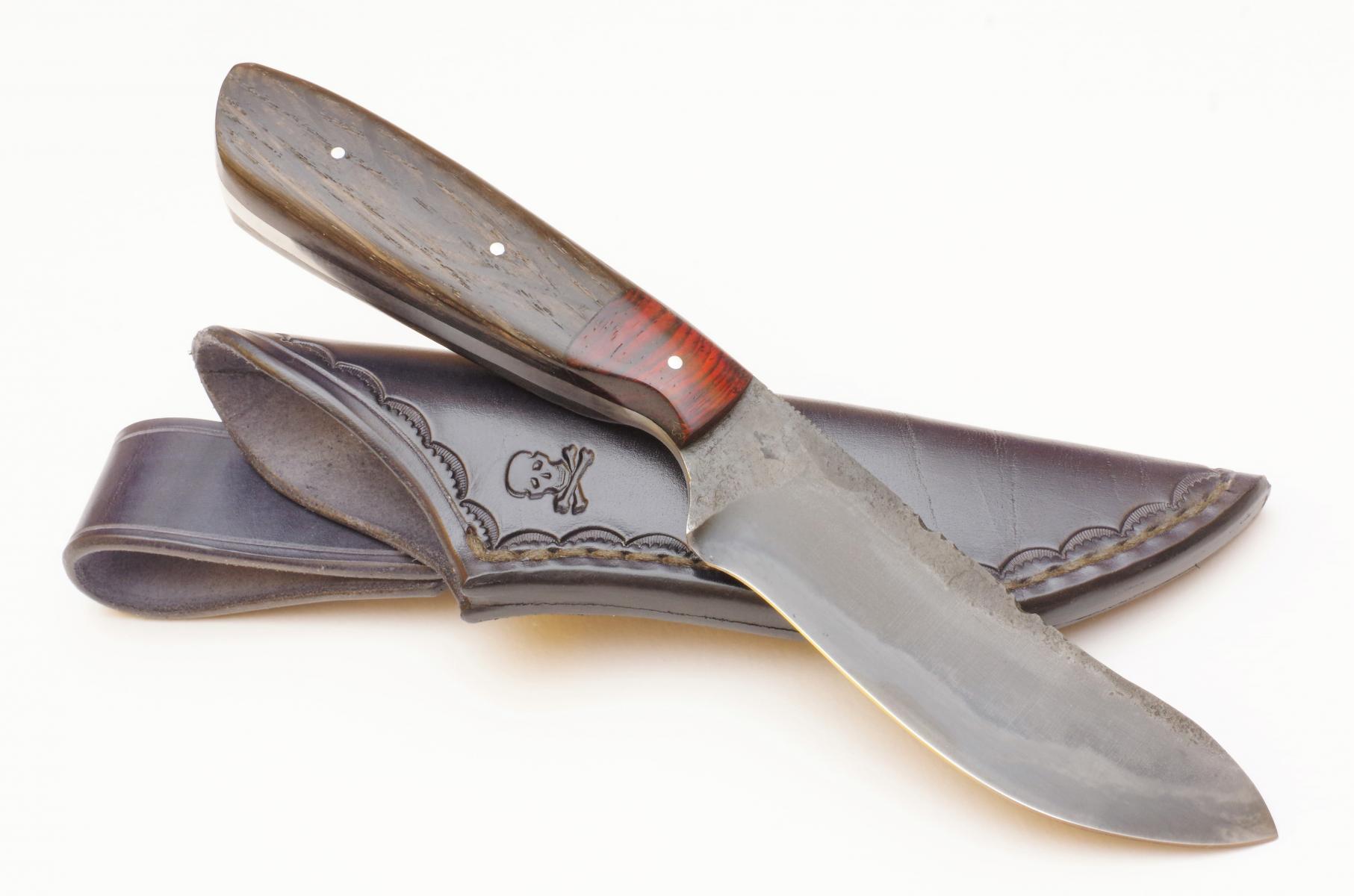 For this knife, French maker David Jolivet was inspired by the Nessmuk, a model developed by the
19th Century American outdoor writer George Washington Sears. The blade is C130, selectively hardened,
the handle is Cocobolo and fossil Morta. The knife measures 22.5 cm. 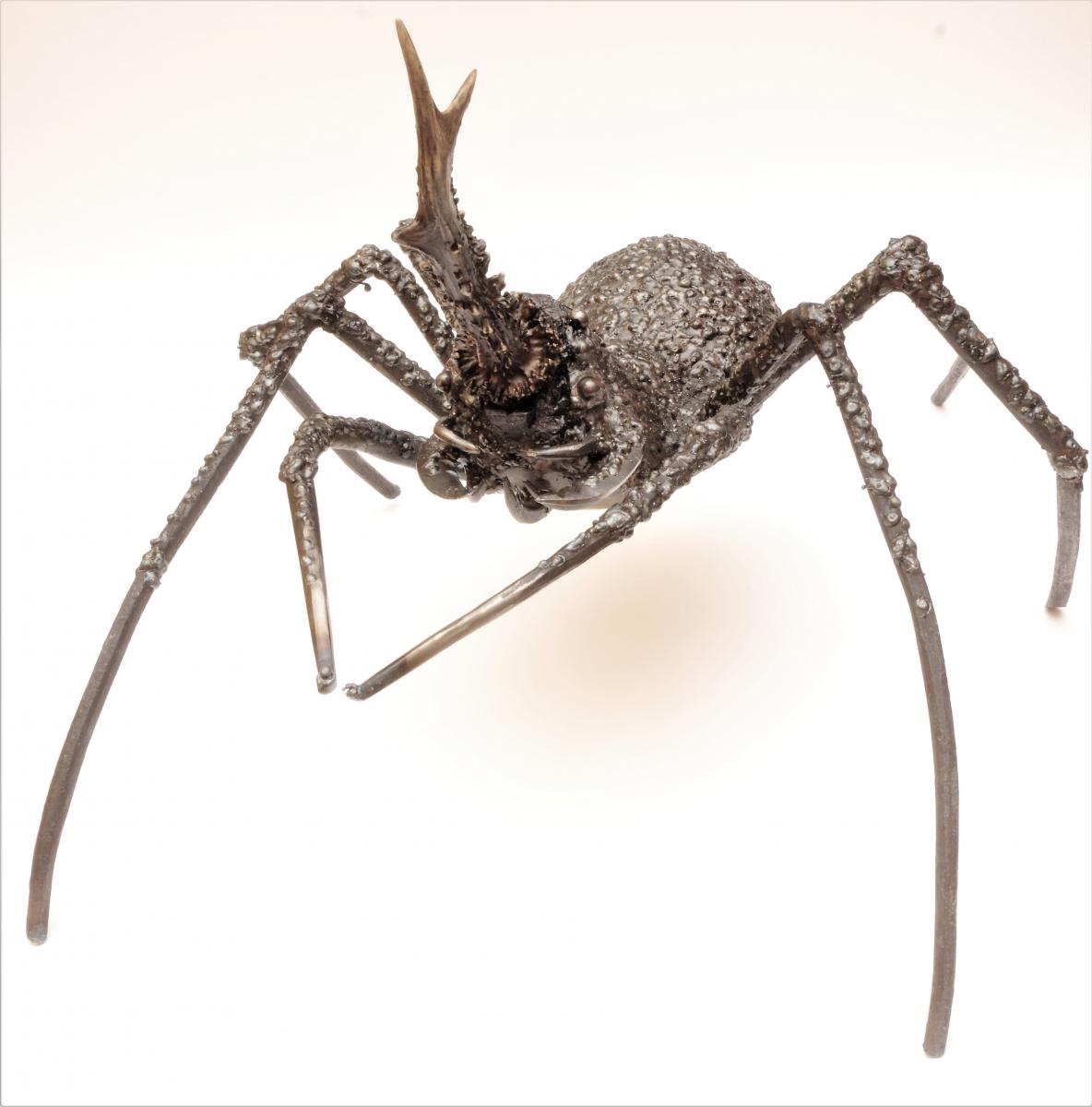 Is this a knife? Yes, this is a knife. The huge spider, with his horn doubling as the handle of a knife, was a
gift by Doc Prise who, at 85 years, still has a tattoo shop in Britain, for his friend Ed Schempp. Schempp
designed several Spyderco models. It is not known yet, if Spyderco will take this one in production.

The Frenchman Nicolas Muros le Rauzic (alias Norse Artefakt) made this slip joint folding knife.
The 8.5 cm blade is made of D2 steel, the handle is black G10.

A folding knife by Glenn Guillou. This distinctive blade is from N690, with Z40 bolsters. The handles
are oxidized oak. The total length of the knife is 19.4 cm.

The ‘Sjoint’ by Italian knife maker Stefano Compostella. The blade is Damasteel, the handle a combination
of titanium and Damasteel. The knife is 18 cm long. 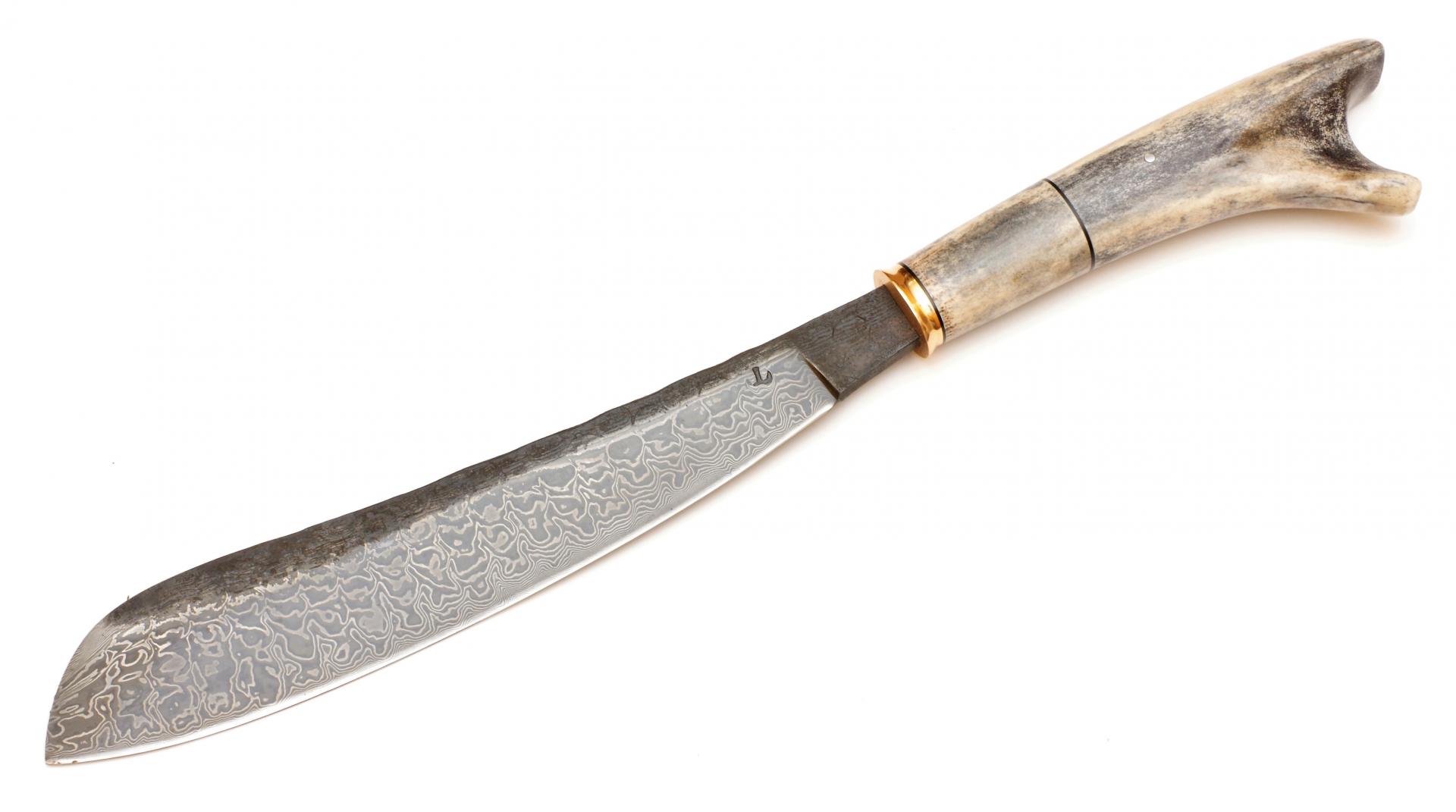 A Parang by Achim Wirtz. The blade is Z40L Damask, the handle Sambar stag and bronze.
The overall length is 44 cm. Achim Wirtz calls it a reminiscence of his Master Jojo. 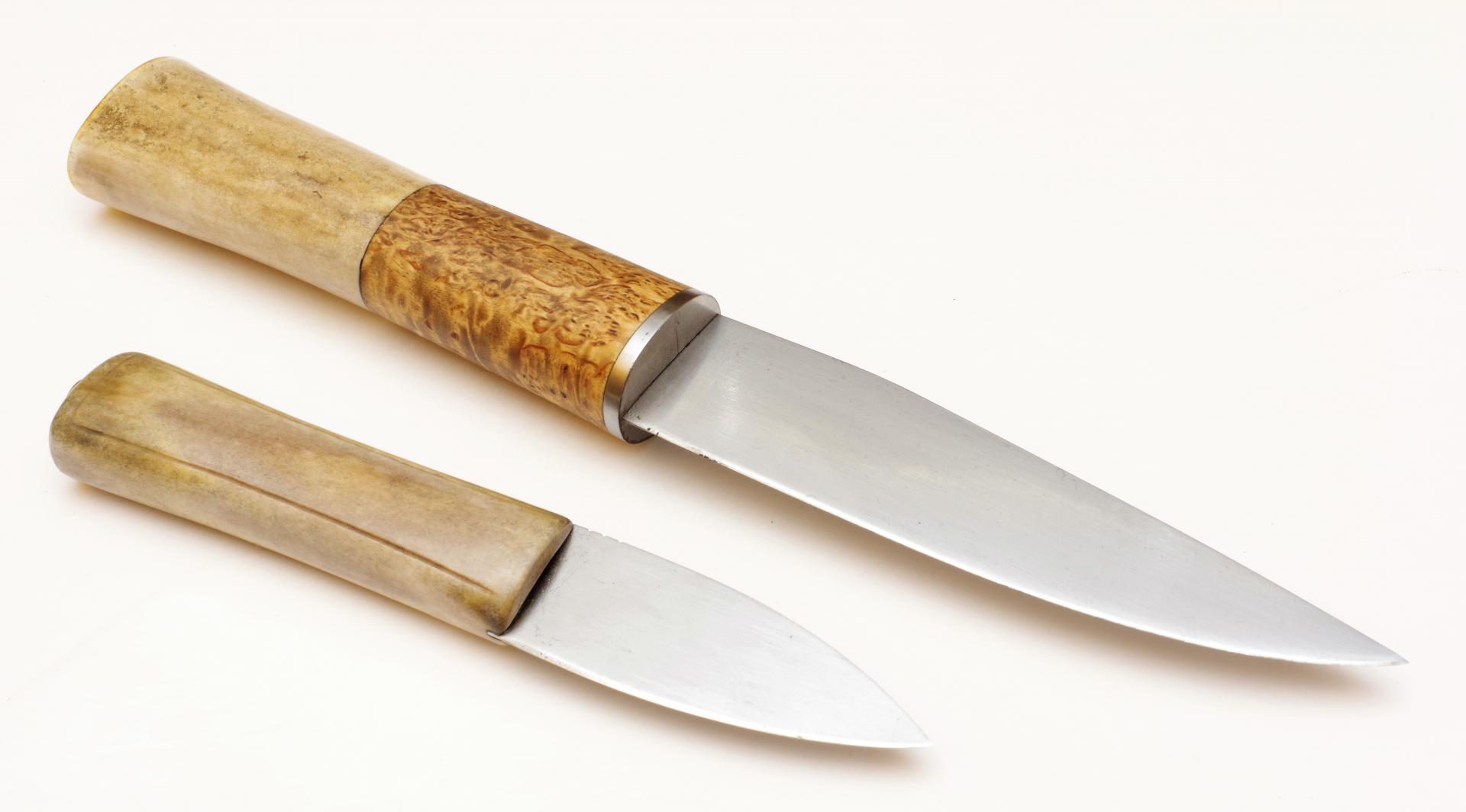 Achim Wirtz has made several museum grade replicas of knives found at the Illerup archaeological site
in Denmark. The upper knife has a Tamahagane blada (ca. 8000 layers), and a handle of Tahamagane,
Karelian birch and reindeer. The lower knife is the Illerup Ådal LBT. This blade is also Tamahagane and
the handle is reindeer stag. Both knives were made without any modern materials. 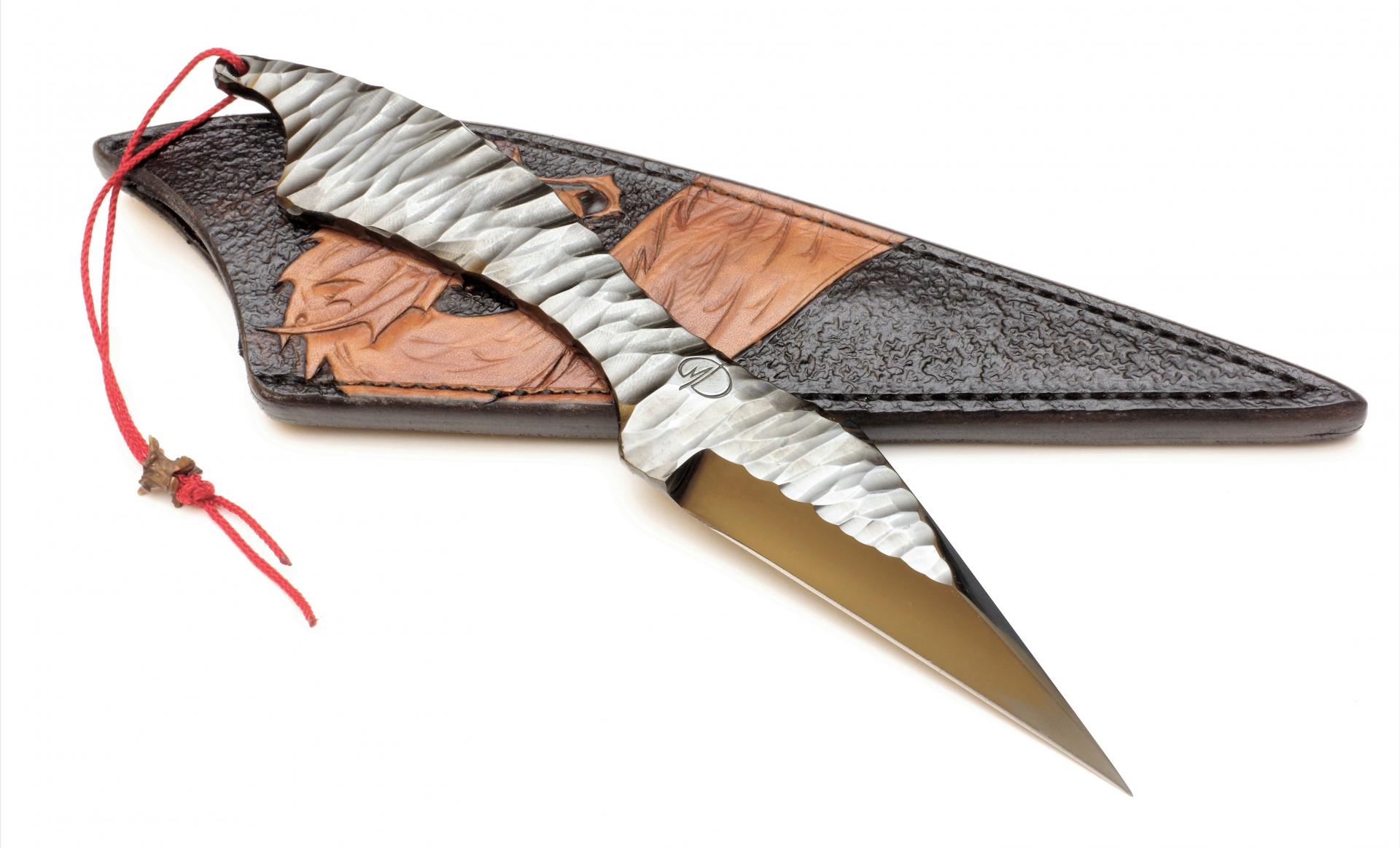 The ‘Comet’ by Italian knife maker Dennis Mura indeed looks like something from outer space. The knife
was made from a single piece of Uddeholm Sverker 21 steel with a DLC coating, and measures 20.5 cm.
The sheath has carved leather by Kiara. 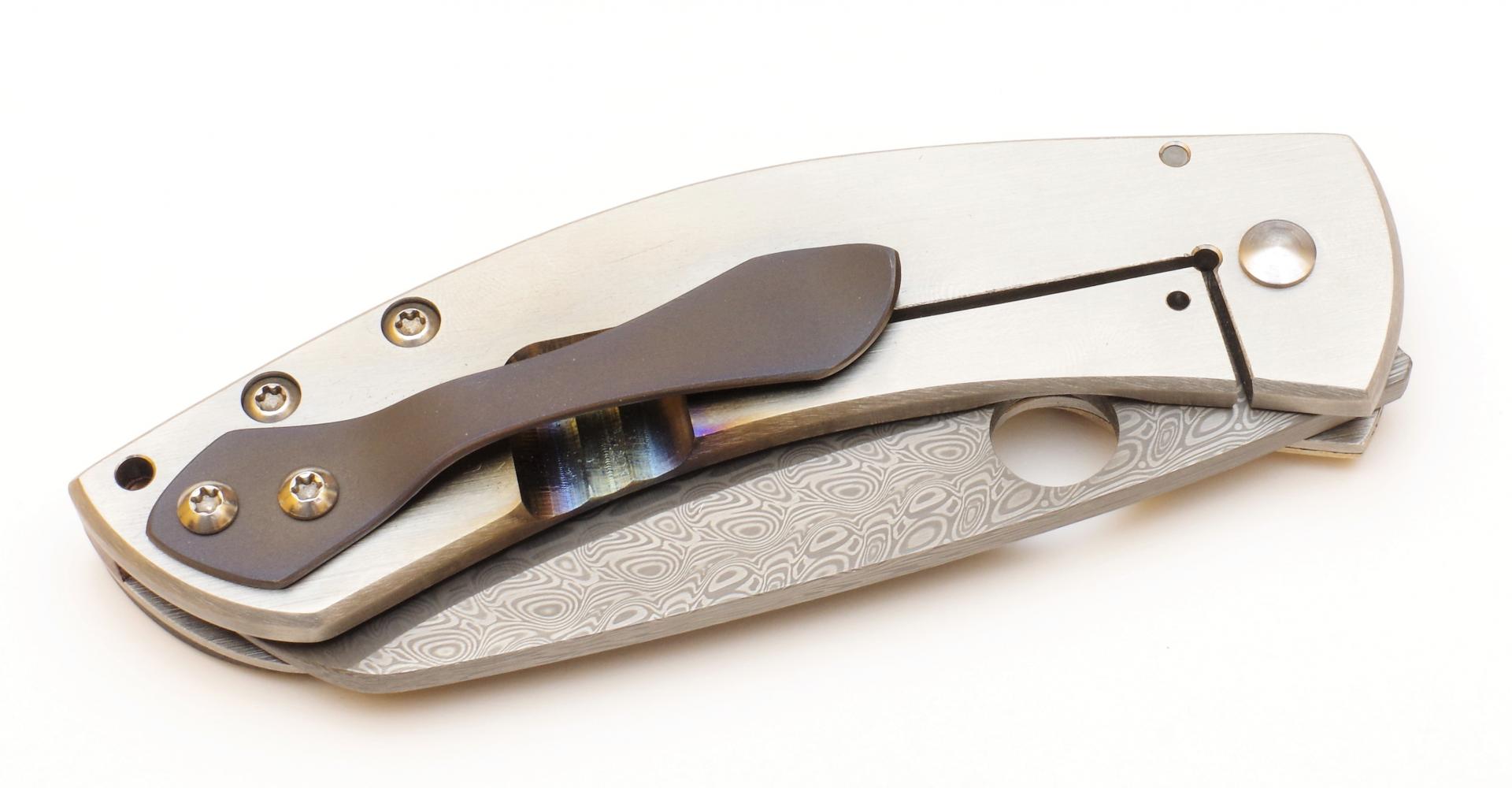 The ‘Whale’ by Belgian knife maker Filip de Leeuw. The blade is Damasteel, the handle is made of Mokume
and black G10. 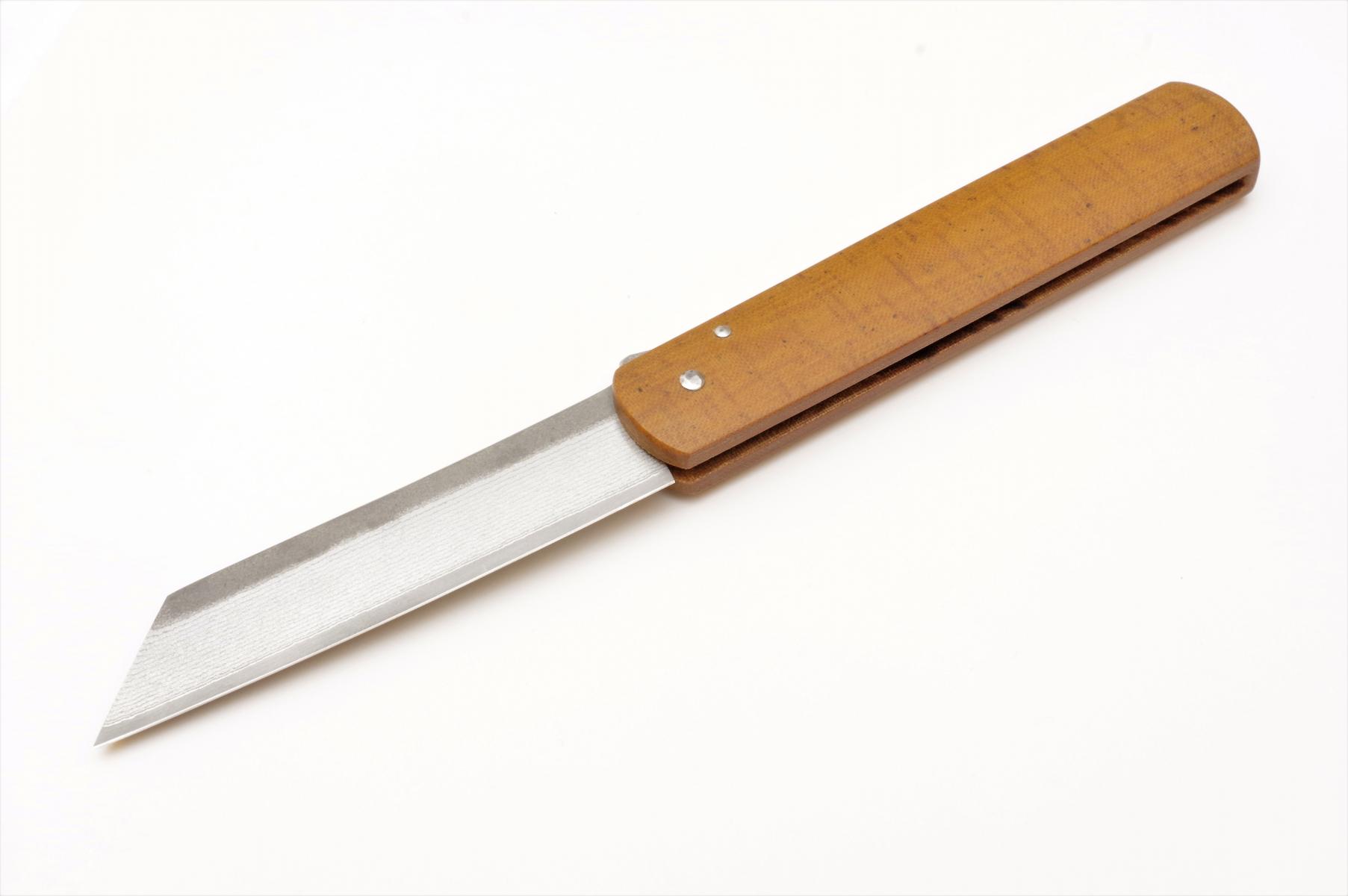 A modern Higonokami knife by the French maker Remi B. The blade is VG10 San Mai, the handle is
Monobloc Micarta.

A backlock folder by Dutch knife maker Martin Annegarn. The blade is made of ATS34 steel, the handle
is Canvas Micarta with SS316 liners. The spring is polished titanium.

A backlock folder by Dutch knife maker Hans Luiken. The blade is RWL34, the handles are home-made
‘jigged bone’, bone with a relief. 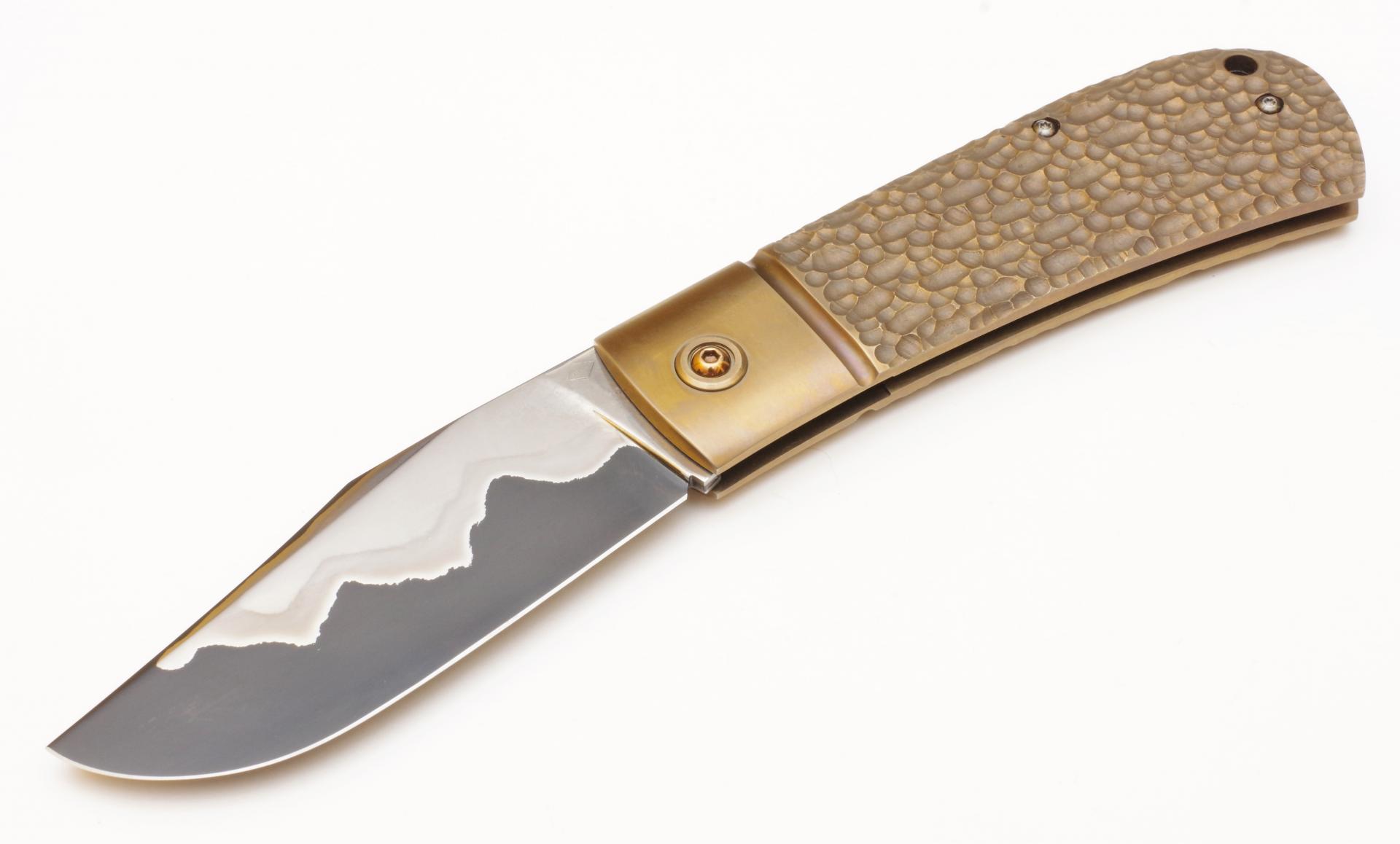 The ‘Badguy’ by French knife maker Franck Souville won the prize for best folding knife. The blade of this slip joint folding knife is Ultrafor-TWR steel, the handle is solid titanium. 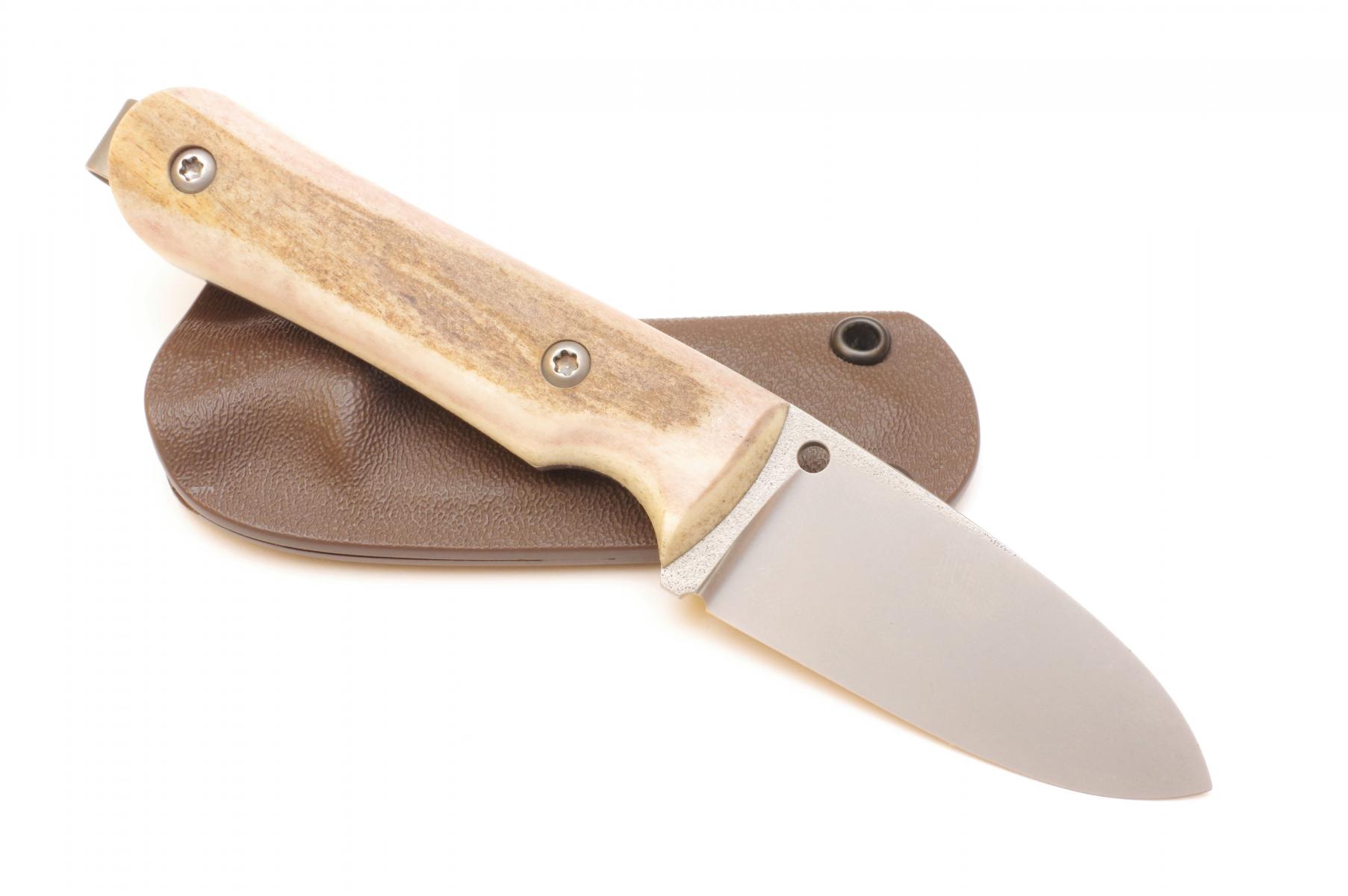 The LAK by Belgian knife maker Maarten Stryckers. The fixed blade is made of 1.4528 steel, with on one
side s scale of reindeer stag and on the other side a pocket clip. The knife has a Kydex sheath. 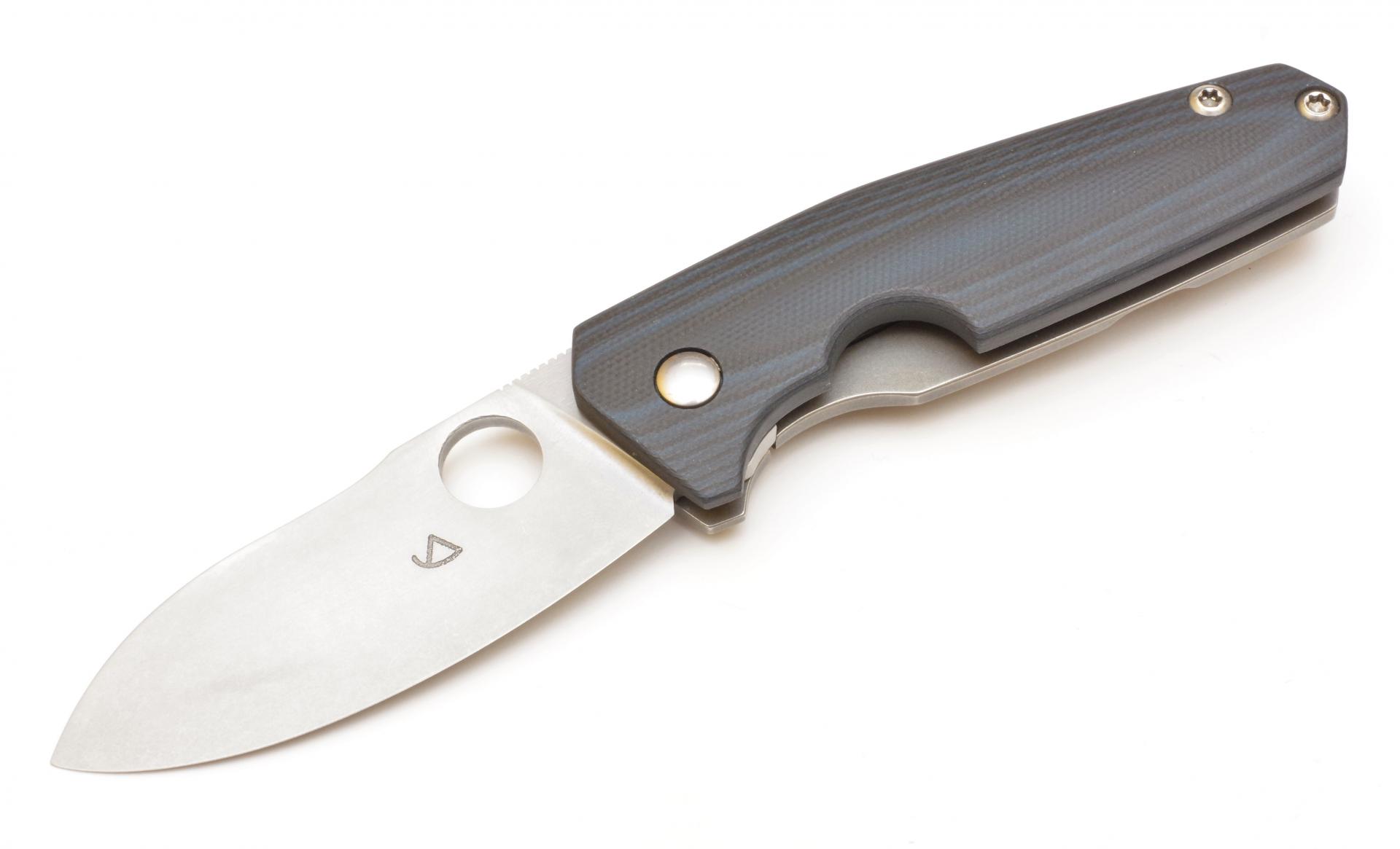 Belgian knife maker Simen Stryckers made this Compound. The frame lock folding knife has a 1.4528 blade.
One side of the handle is Grade 5 titanium, the other has a blue-black G10 scale. 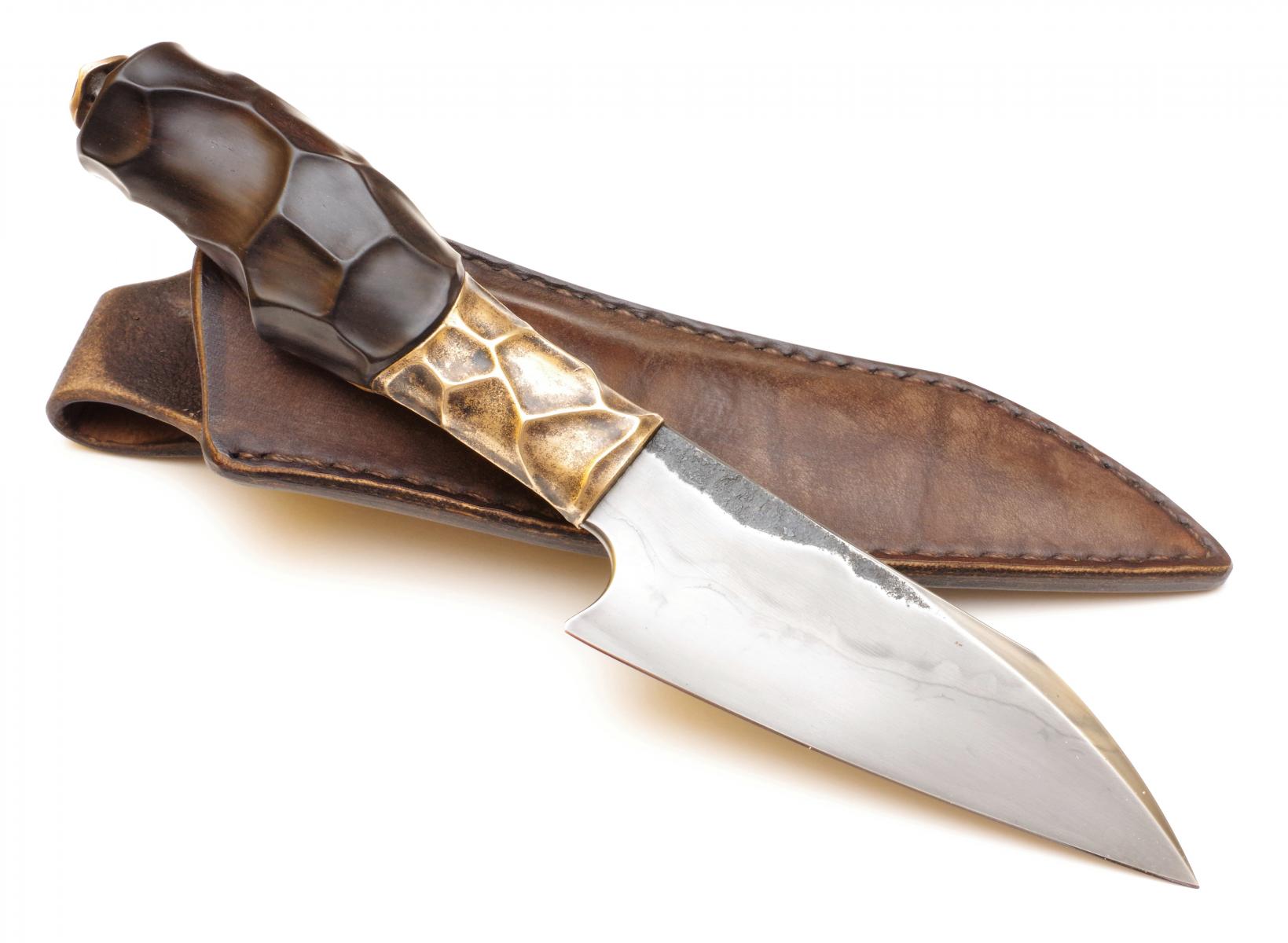 Roman Stoklasa from the Czech Republic made this fixed blade. The blade is Poldi EZN Special (which more or less equals W2). The handle is made of grenadille wood and bronze.

Czech knife maker Petr Hofman showed in Gembloux this ‘Starway’. The slip joint folding knife has a M390 blade, and a Zirconium handle, inlaid with dozens of little steel balls.

Filip Hejkal Ondruska from the Czech Republic baptised this knife aptly ‘Wrapped’. The blade is Poldi 19 356 steel. The leather covered handle is wrapped in steel wire. 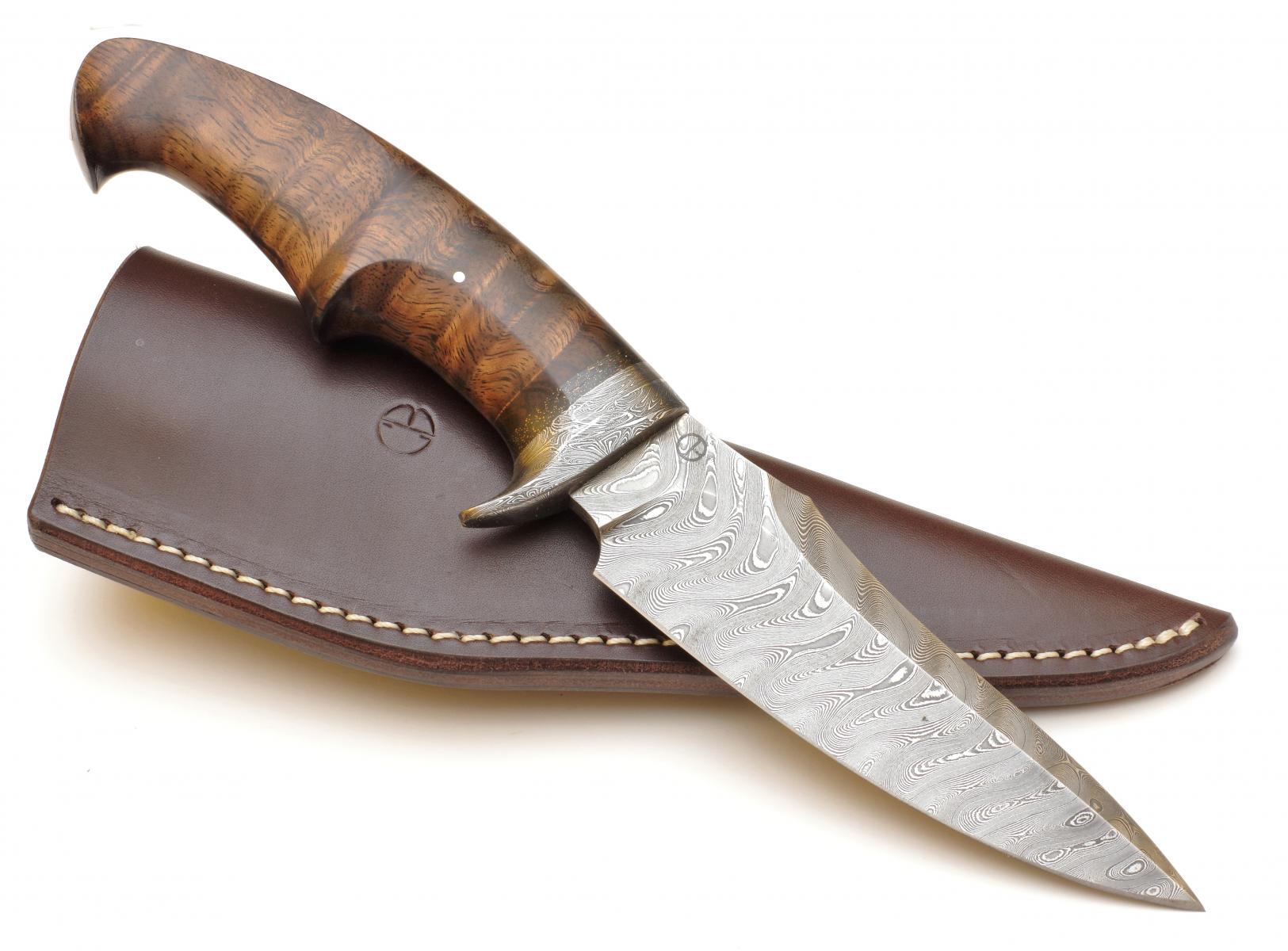 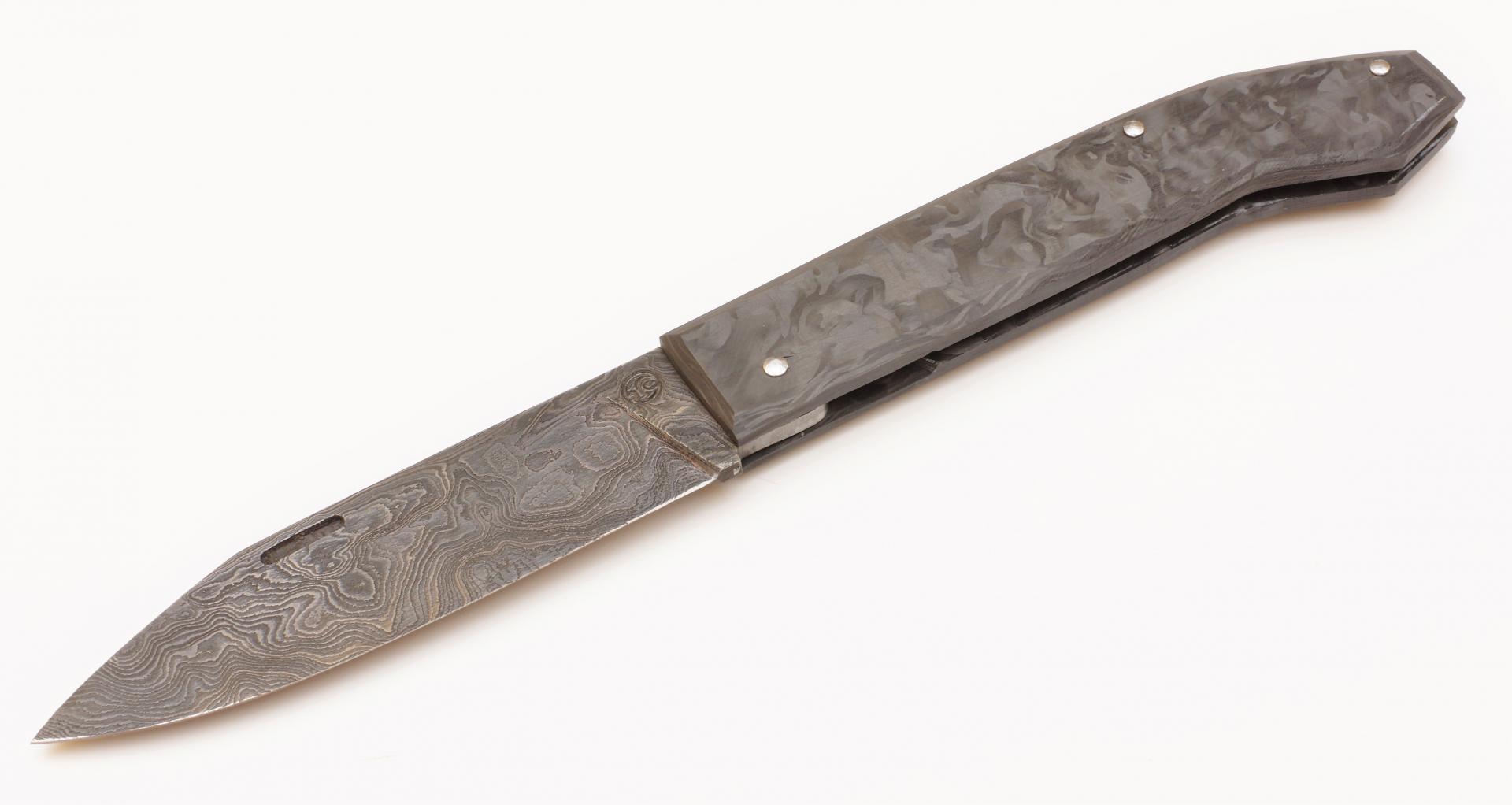 A folding knife by the French maker Louis Blanchet Kapnist (Sü-Sol). The blade is 90MCV8/15N20 Damask,
the handle is marbled carbon fibre.

Andrzej “Nazir” Brzostowski from Poland calls this knife the ‘Nebula’. The blade is random Damask from
15N20 and O1, with Brzostowski’s logo in gold. The hand-sculpted handle is anodised titanium. The length
of the knife is 20 cm. 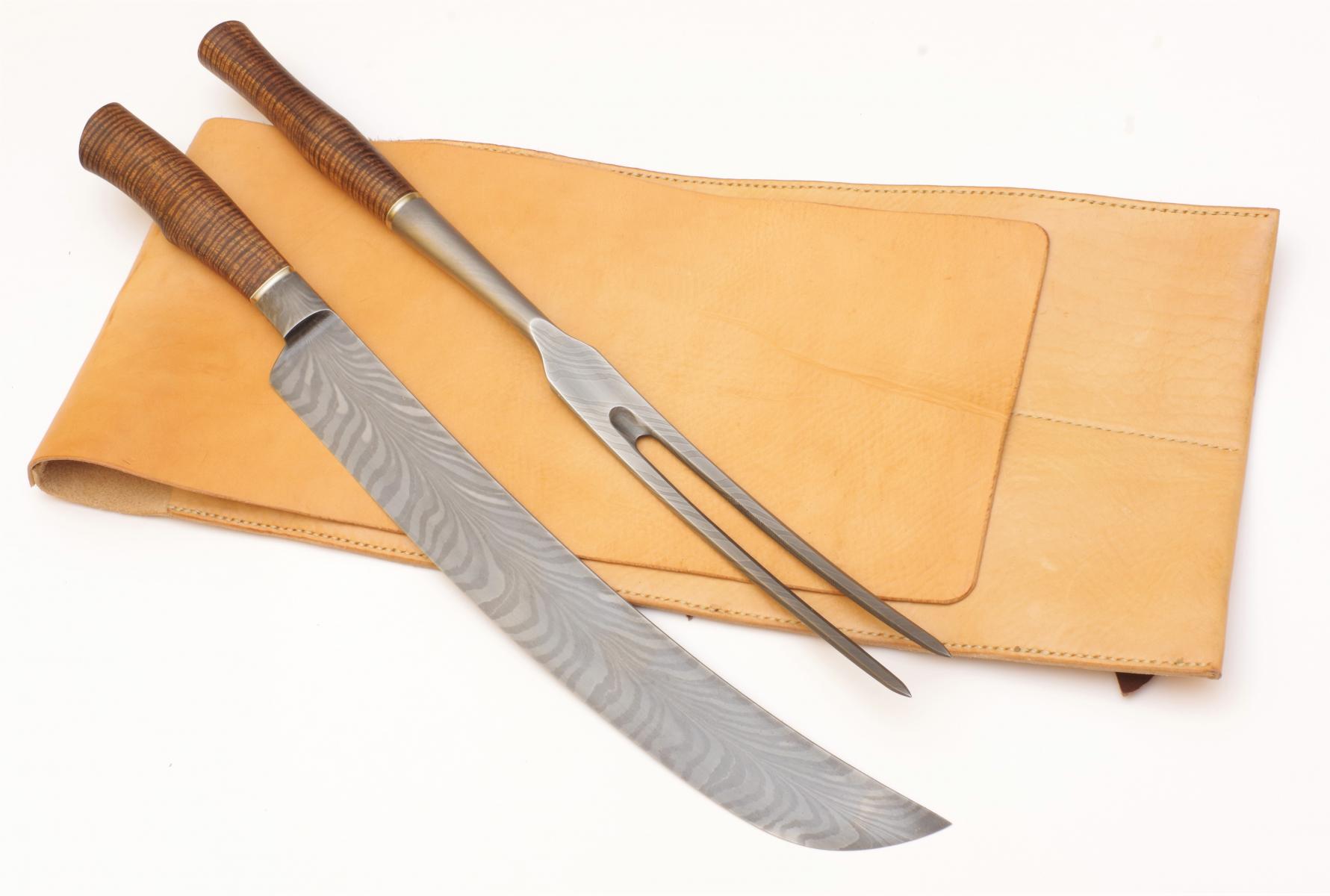 The Polish knife maker Janusz Bladowski made this formidable barbecue set. Knife and fork measure
about half a meter. Both are made of 15N20/O1 feather Damask. The handles are made of Hawaiian Koa.
The tools are transported in a purpose-built leather sheath. 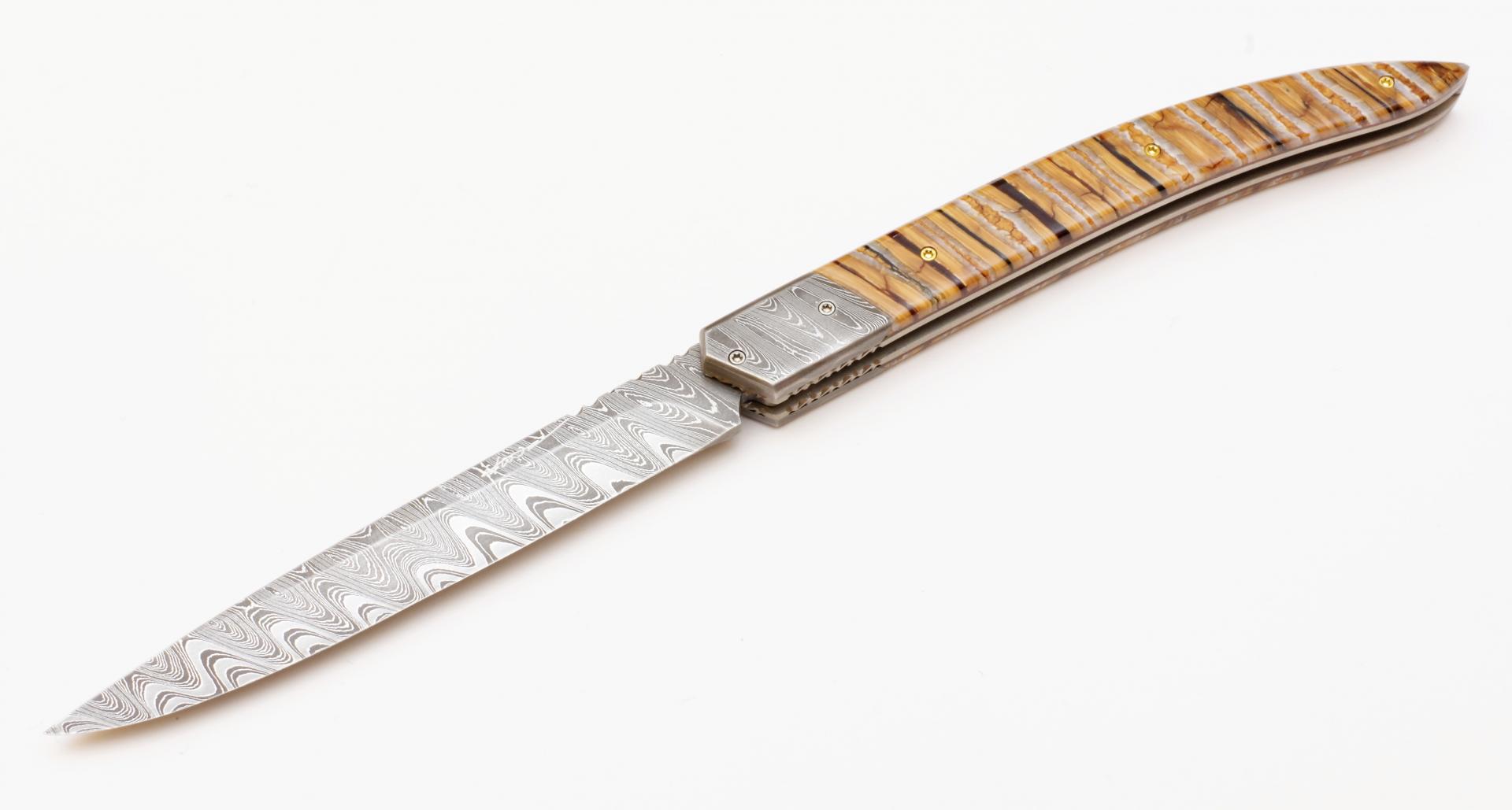 French artisan Daniel Schweich made this gracious folding knife with a blade of Mike Norris Damask and handles of mammoth tooth. The knife measures 23 cm when opened. 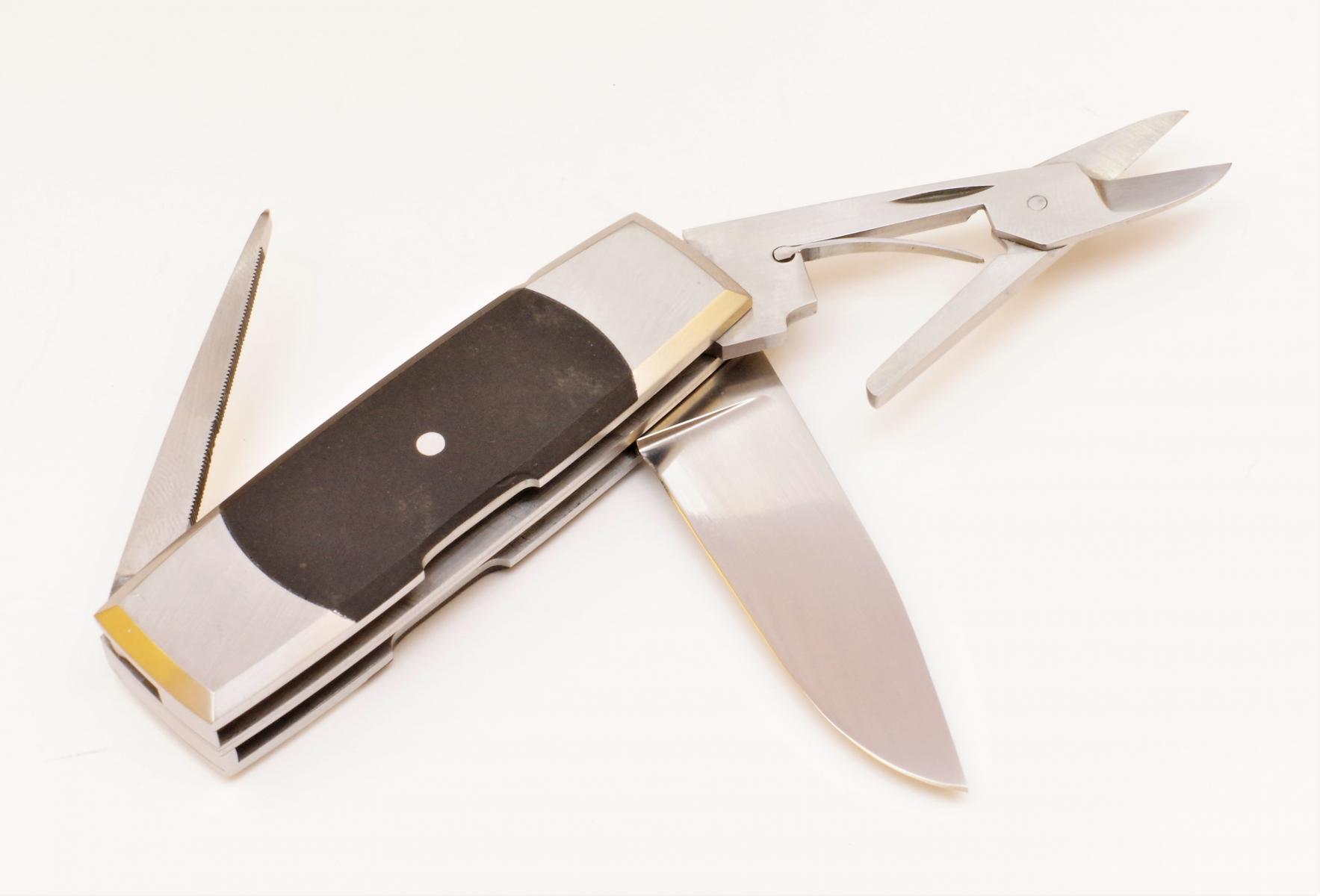 French knife maker Nicolas Couderc calls this the ‘Onglier’, a kind of
manicure set. It consists of three parts: file, scissors and a knife.
Folded, the Onglier measures just 7 cm. The steel is 14c28N, the handles
are Paperstone. 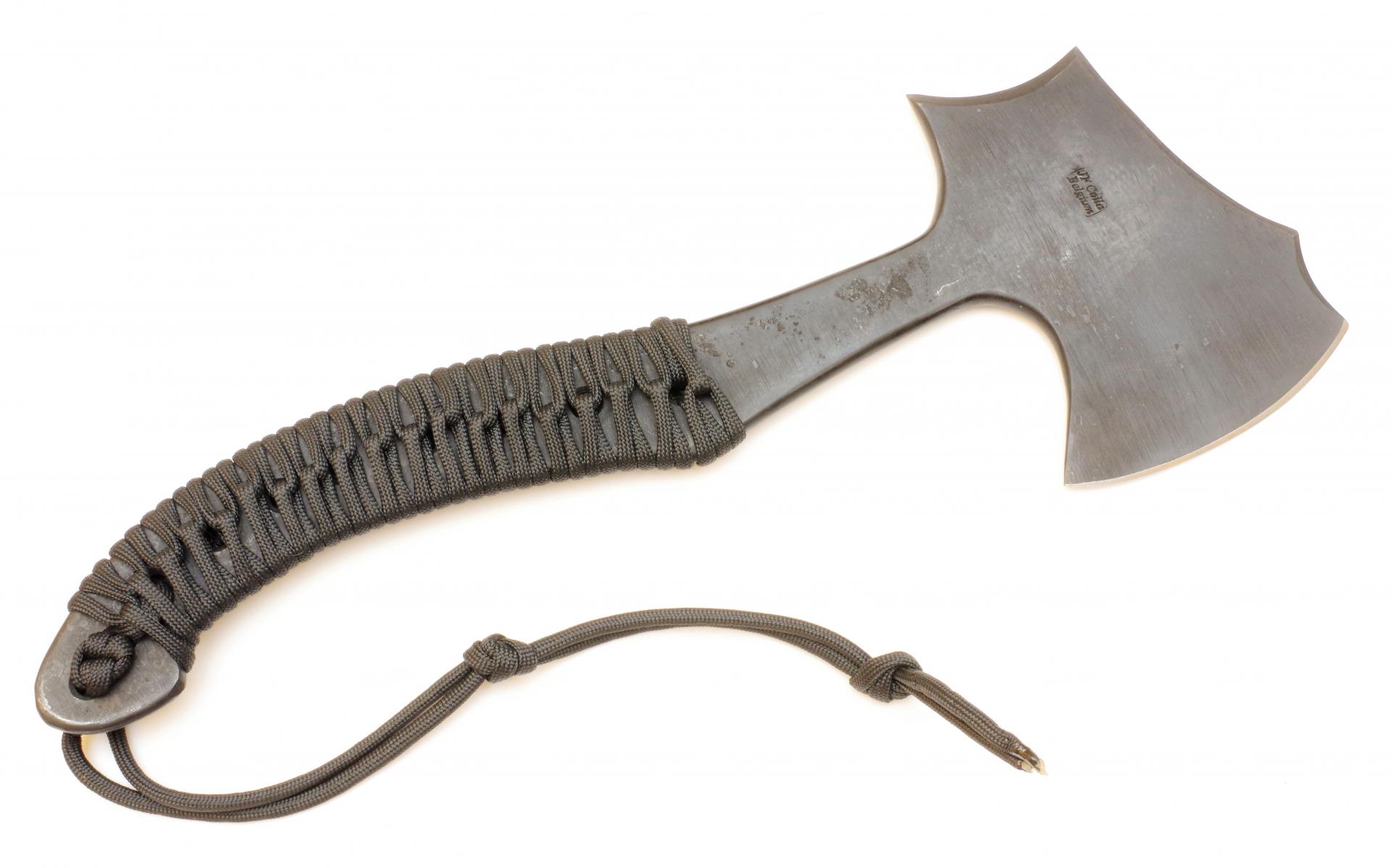 Belgian knife maker J.F. Colla stuck to the theme of the show (Vikings blades and axes) with this impressive tactical/Viking axe. It is made of 51CrV4 carbon steel with a paracord wrapped around the grip. The axe
measures 40 cm. 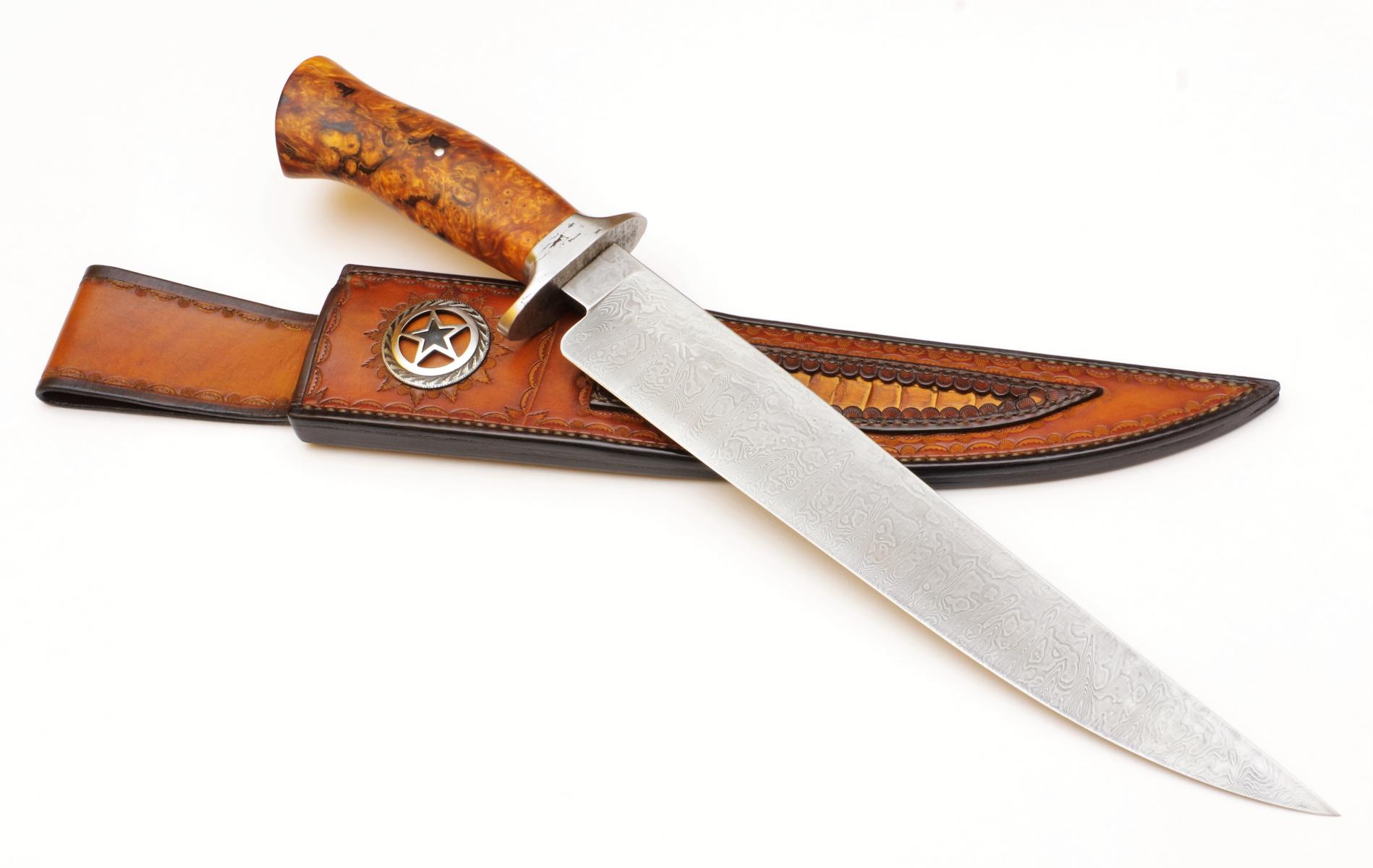 A grand Bowie made by the Italian/Belgian craftsman Alessio Salsi. He forged the blade with 300 layers
of Damask, made the guard of wrought iron and the handle of stabilised spalted maple. 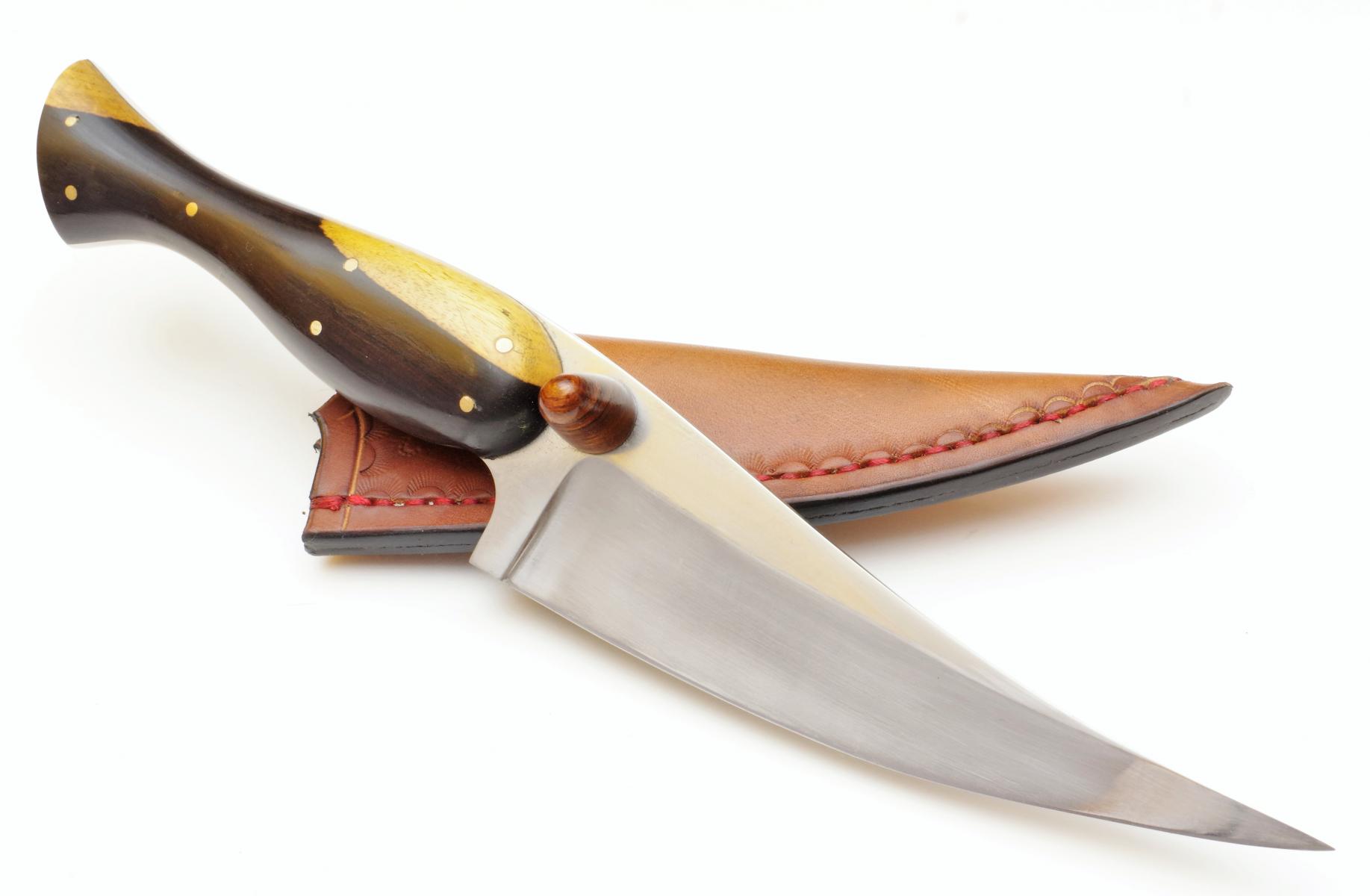 José Rey (Breoghan) calls this knife ‘Elegance’. The blade is 115W8 steel, the handle is made of ebony and Iron Wood. The knife measures 27 cm.

This year’s edition of Gembloux was Virgil Poddig’s dream. He specializes in Viking knives and swords,
so he could not have been happier with the theme. This sword is a good example of his work: the blade
consists of 200 layers XC75/15N20 Damask, the handle is walnut. 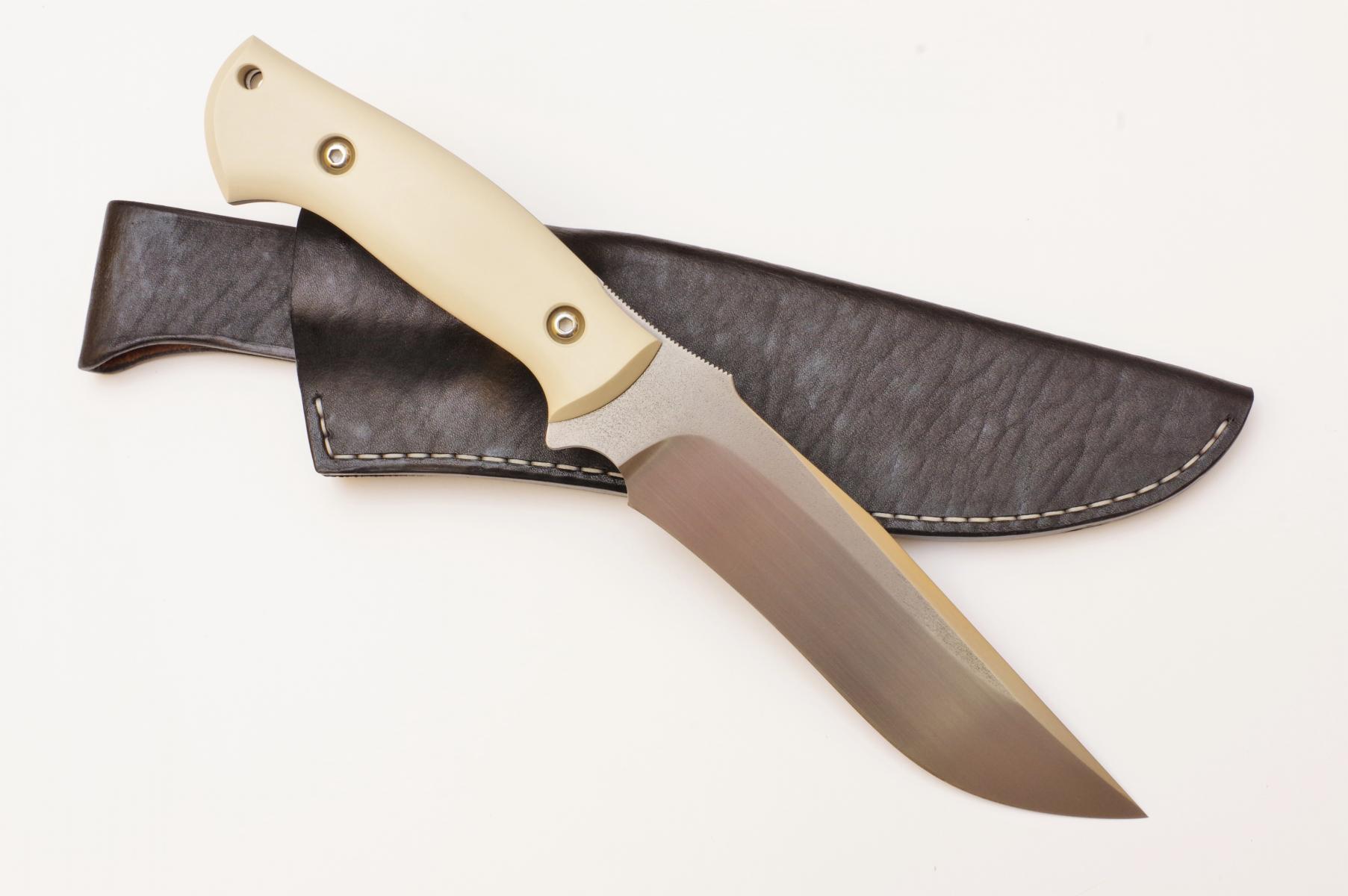 Polish knife maker Kamil Długosz presented this ‘Merkava’. The knife has an Elmax blade and handle
made of antique ivory Micarta. The total length is 29.5 cm.

A nicely lined fixed blade by the French maker Olivier Briey, who works under the name of Couteaux BK.
The blade is Suminagashi (white paper steel), the handle is stabilized poplar. 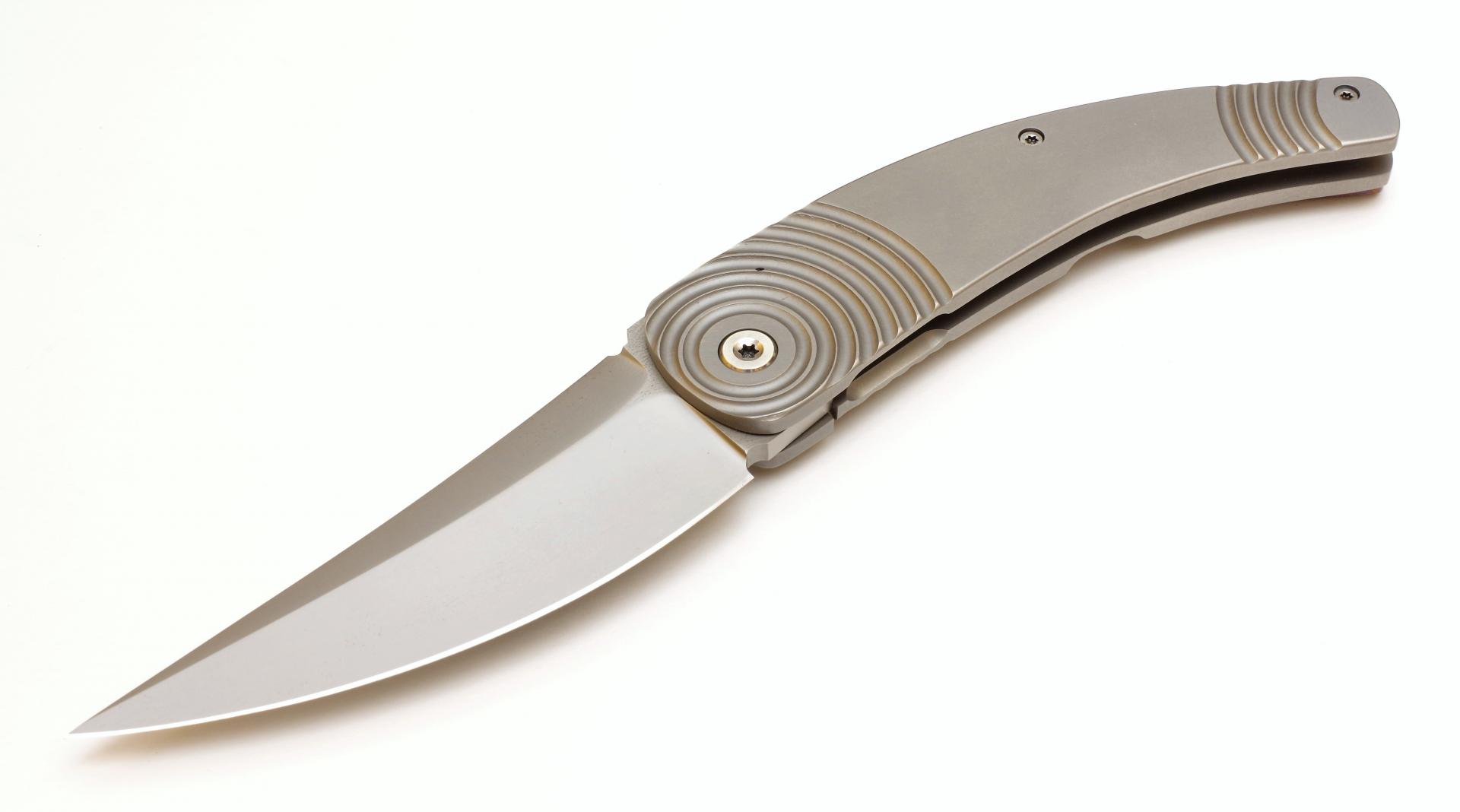