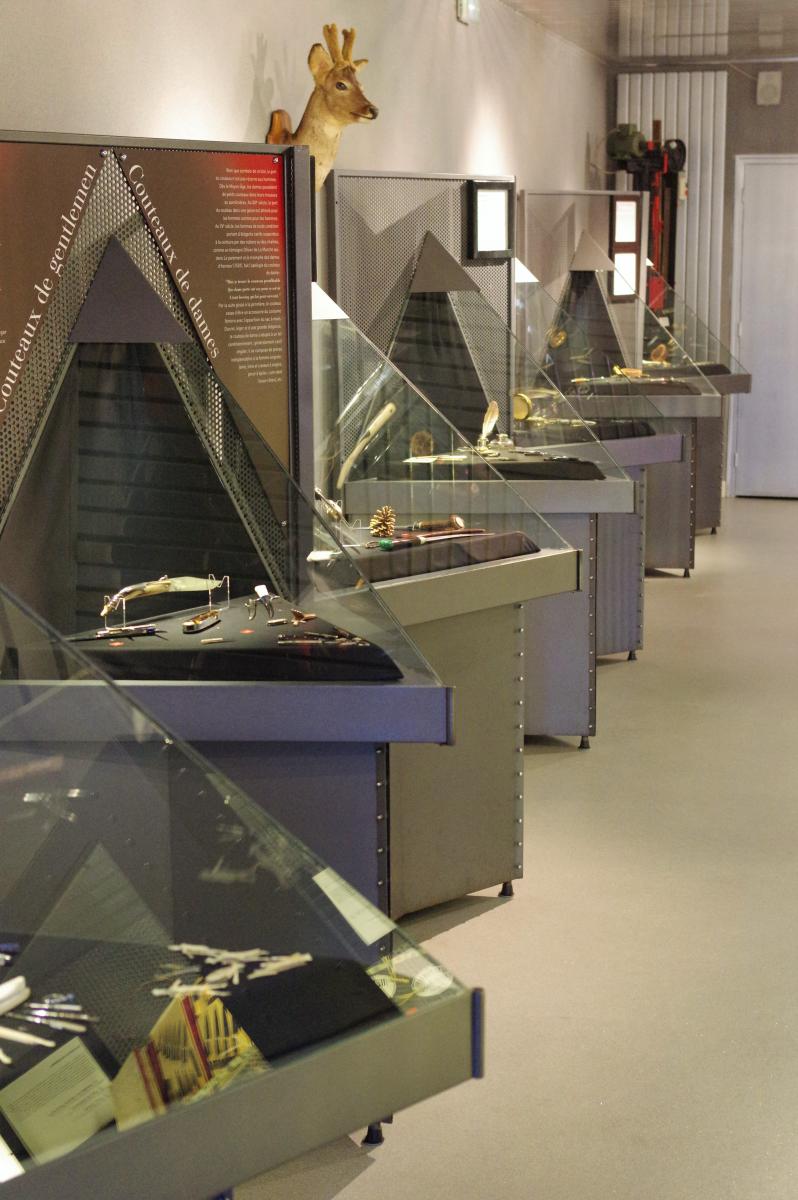 Left: The entrance hall of the Musée de la Coutellerie in Nogent, France.
Right: A part of the permanent exhibition.
How big should a museum be? Well, it will largely depend on the size of the exhibits. The Musée de la coutellerie in Nogent, Department Haut Marne, France has an exhibition space of only 200 square meters. Yet, in that limited area it does manage to present an impressive exhibition.
To explain what the museum is about we must first discuss two things: the meaning of the French word ‘coutellerie’ and the history of the city of Nogent. ‘Coutellerie’ translates in English to cutlery, which should be taken in the broadest sense here. The museum distinguishes seven classes:
- Closing cutlery: hunting knives, pocket knives, etc.;
- Table cutlery: table knives, carving knife and fork, etc.;
- Professional cutlery: butcher’s knives, kitchen knives, etc.;
- Scissors: scissors for embroidery, tailor’s scissors, etc.
- Hand-held tools: grafting knives, hedge shears, etc.;
- Surgical instruments: tweezers, scalpels, etc;
- Toilet requisites: depilate tweezers, nail clippers, etc;
The museum collection consists of 8000 objects, of which only 8 percent can be displayed. To show as much
as possible, there are temporary exhibitions. At present there is one on an amazing variety of gardening tools. 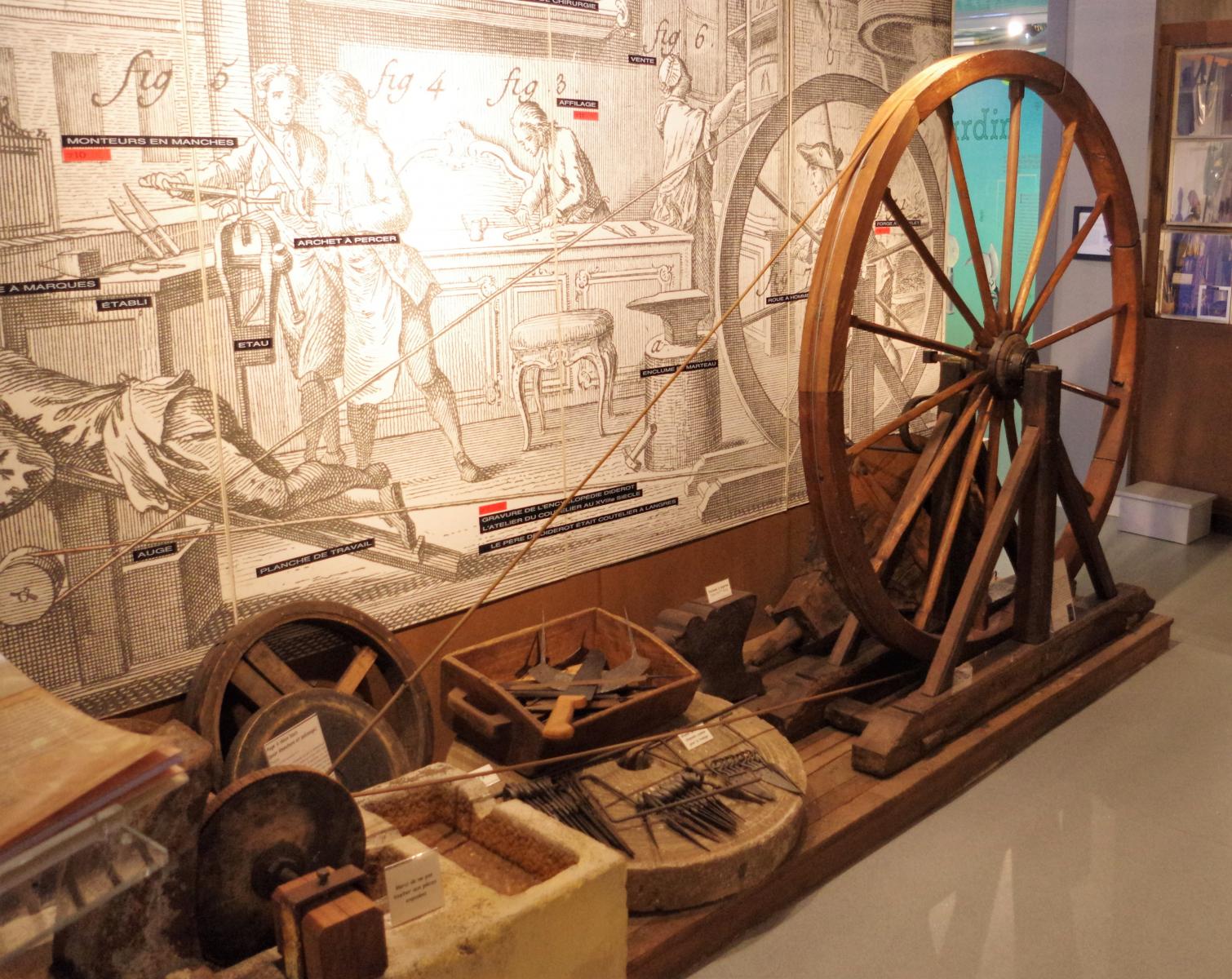 The plate on the wall shows an engraving from a knife makers workshop, from the encyclopaedia of Diderot.
The big wheel was used to operate the grindstone.

The city of Nogent was once one of the thriving centres of French cutlery. This originated in Langres, but strict
guild rules and new taxes prompted more and more knife makers to move from the city to nearby Nogent-le-Roy,
as it was called at the time. The first Nogent knife makers are mentioned in 1671, and by 1750 a new increase
in taxes prompted a new exodus from Langres. 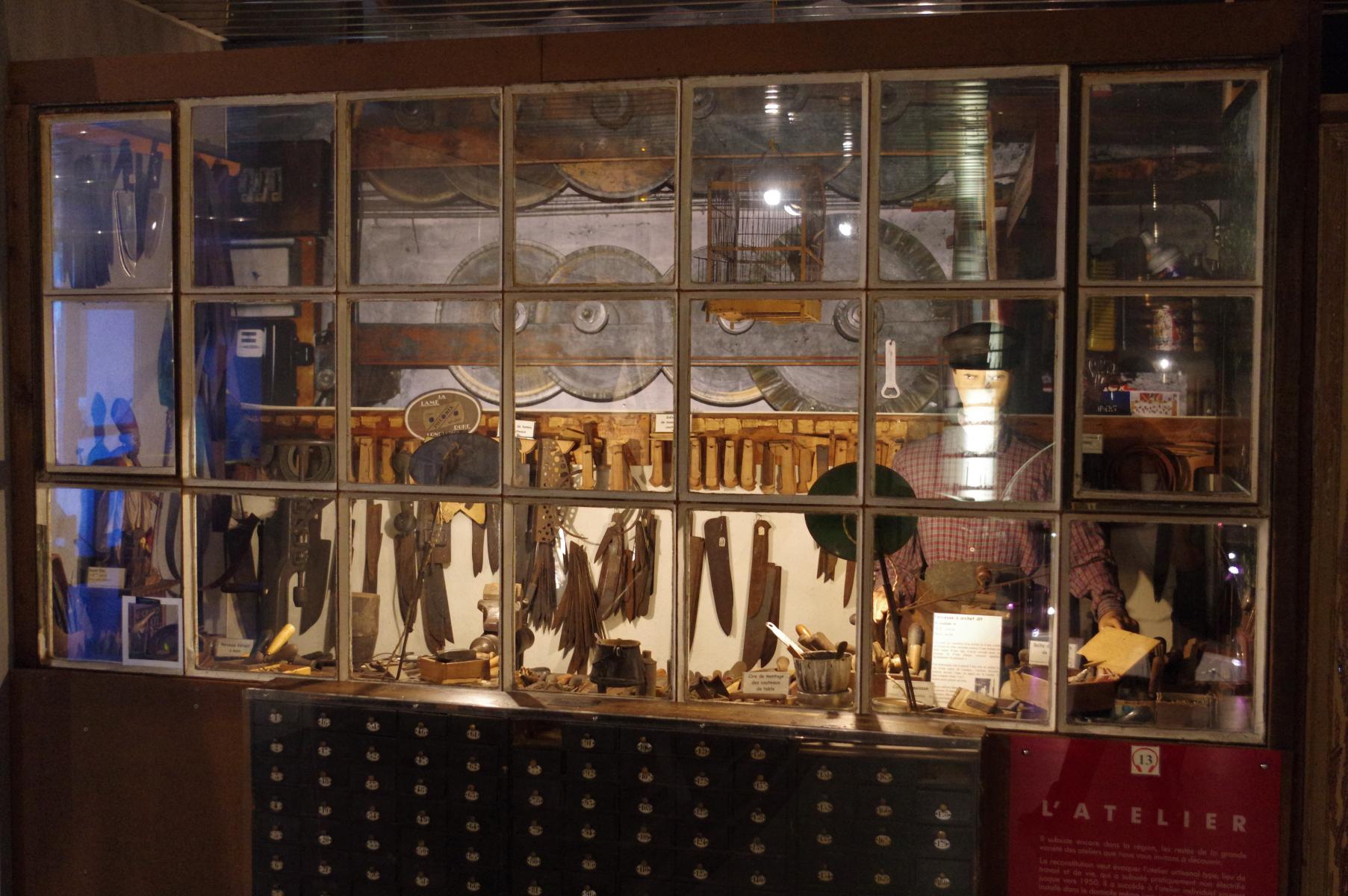 The recreation of a knife maker’s workshop.

In the 19th century, the industry reached its zenith, with an estimated 6,000 artisanal knife makers in and
around Nogent. Together with their workers and apprentices, the cutlery industry employed some 10,000 people. Today, only one custom knife maker survives. However, the craft has not been completely lost. Nogent still has
an important industry for chirurgical knives, tools and prosthesis, with an international reputation. Several
showcases in the museum give a good representation.

A little silver box with a folding knife.

The museum was established in 1991 in the building of an ancient cutlery, which was modernised extensively.
Its purpose, explains ‘Responsable du Musée’ Lauriane Grosset, is to honour the heritage of cutlery. The
museum focusses on cutlery and the craftsmen from the ‘bassin Nogentais’ (the Nogent basin), a region in
a circle of approximately 40 kilometres around Nogent, encompassing some forty villages and the city of Langres.
The age of the items spans a period between the 18th Century up to the present day. The collection was
amassed through gifts and legacies, purchases from individuals or acquisitions at auctions. Fortunately,
there still is a budget for those.

A salesman’s set of miniature knives.

Part of the work of the museum is to retrieve information about the Nagant craftsmen. Many of them worked
for prestigious Parisian ‘Maisons’ like Christofle, Hermès, Ercuis or Puiforcat, who put their names on the
finished product, rather than that of the original craftsman. That makes them sometimes hard to identify.

A wonderful and luxurious set of travel necessities.

The Nogent knife industry consisted of some peculiarities such as: the lack of use of Damascus steel, the
miniature knives, and knife-related brooches, of which the museum has a nice collection. There was, for
instance, a salesman’s set of miniature kitchen knives which he would take to show to potential clients.
Key pieces of the collection were the two pairs of scissors by Nicolas Pierre Pelletier, and the so-called
Zeppelin knife by Louis and Lucien Garnier.

Some examples from the temporary exposition on garden tools, some of which are not easy to understand.

Nicolas Pierre Pelletier (1828-1921) was a self-taught man, who formed his scissors to look like lace. The
work was incredibly delicate and fragile: it took him between one and two months to make just one pair of
scissors. Only two pairs are still known today, and both are in the museum. There is a small exhibition
about Pelletier until September 30, 2018, titled ‘Nicolas Pierre Pelletier or lace of steel’.

One of the delicate scissors by Nicolas Pierre Pelletier.

The Zeppelin knife was made by the brothers Louis and Lucien Garnier, Nogent knife makers It was reportedly
inspired by the crash landing of German Zeppelin L49 near Nogent on October 20, 1917. The Zeppelin knife
has silver liners, eight different tools and scales of tortoise. The atelier Garnier apparently planned two make
two specimens, large and small, but only one is preserved in the museum. In recent times, the Zeppelin knife
has been recreated by several French knife makers, as a sort of chef d’oeuvre: Robert Beillonnet, Mathieu
Herrero, Michel Prevost and Adrien Vautrin.

The Zeppelin knife from Louis and Lucien Garnier.

Apart from being the ‘Responsible du Musée’, Lauriane Grosset is also the author of two books on the collections of the museum: La Coutellerie de Nogent and La Cisellerie de Nogent. They are sold in the museum shop, or through the website of the publisher, http://www.crepin-leblond.fr.