Euro Knife, the European custom knife show in Strasbourg, may rightly be called a success story. The show was held for the first time in 2017 and was considered an experiment. In just a year however, the exhibition’s space has doubled, there were almost twice as many participants, and the numbers of visitors rose accordingly. Apart from format of the show, there were plenty of sales as well. Following the second edition, held in early February this year, there were mostly happy smiles.
Text and pictures by Bas Martens

Organising a knife show is a complicated undertaking. As organisers, you have to book a sufficient number of exhibitors. These exhibitors are vital to drawing in the visitors. However, if these visitors are not in a mood to buy anything, the exhibitors that acquiesced to coming will be unhappy. When starting a new show, it is especially important to strike the right balance between the two, and then all that remains is to see whether you can attract both enough exhibitors and interested visitors. Euro Knife, which was held for the first time in Strasbourg last year, made a promising start. The second edition, on February 2 and 3 this year, lived up to the earlier expectations. The show was twice as big and showcased twice as many exhibitors.

Séverine and Gregory, organisers of Euro Knife.
This year, the creativity and variety in styles was especially notable. From classic to modern, austere to exuberant, from a minimal neck-knife to an impressive Bowie – Strasbourg featured a large variety of knives, most of them made to a high level of craftsmanship.
What desires were left to be fulfilled in later shows? Well really, not all that many. Organiser Gregory Pohl: “Euro Knife is a custom knife show and it should continue to be just that. We are not that strict, but the emphasis must be on artisanal knives. That will not change. As long as we stay here, at the Mercure Hotel, the show cannot become any bigger. We are already using the complete room. We could try to get in more exhibitors, but that would mean we have to sacrifice the rather spacious lay-out we have at present, and we don’t want to do that either.”
In short, the expectation for Euro Knife 2019 will be much the same as it was this year. The next edition will be held on the 2nd and 3rd of February next year at the Mercure Hotel in Strasbourg. European Blades will keep you informed, but those curious can also have a look at www.euroknifeshow.com or on their Facebook page at Euroknifeshow. 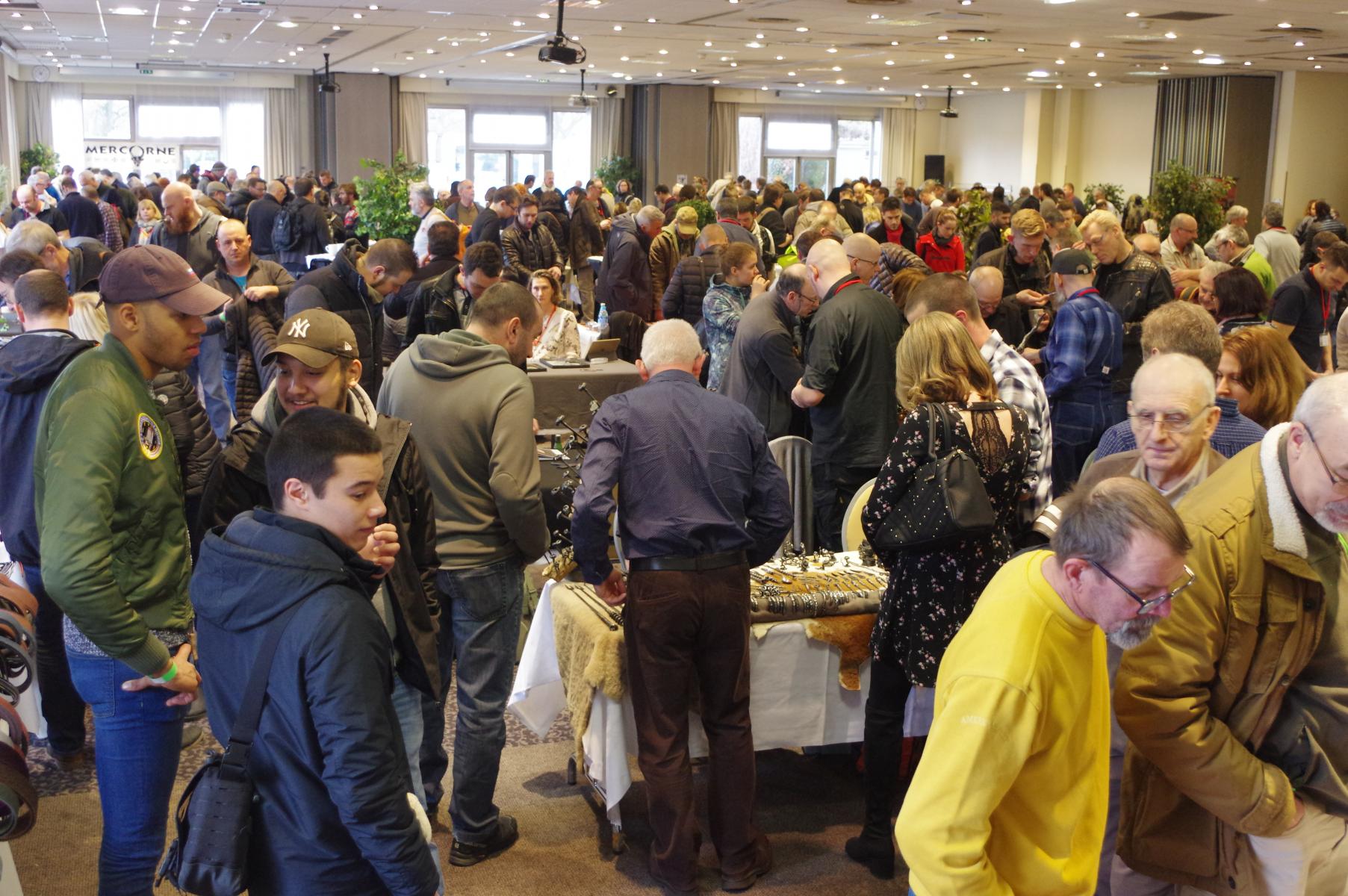 This is how you want to see your knife show: busy. 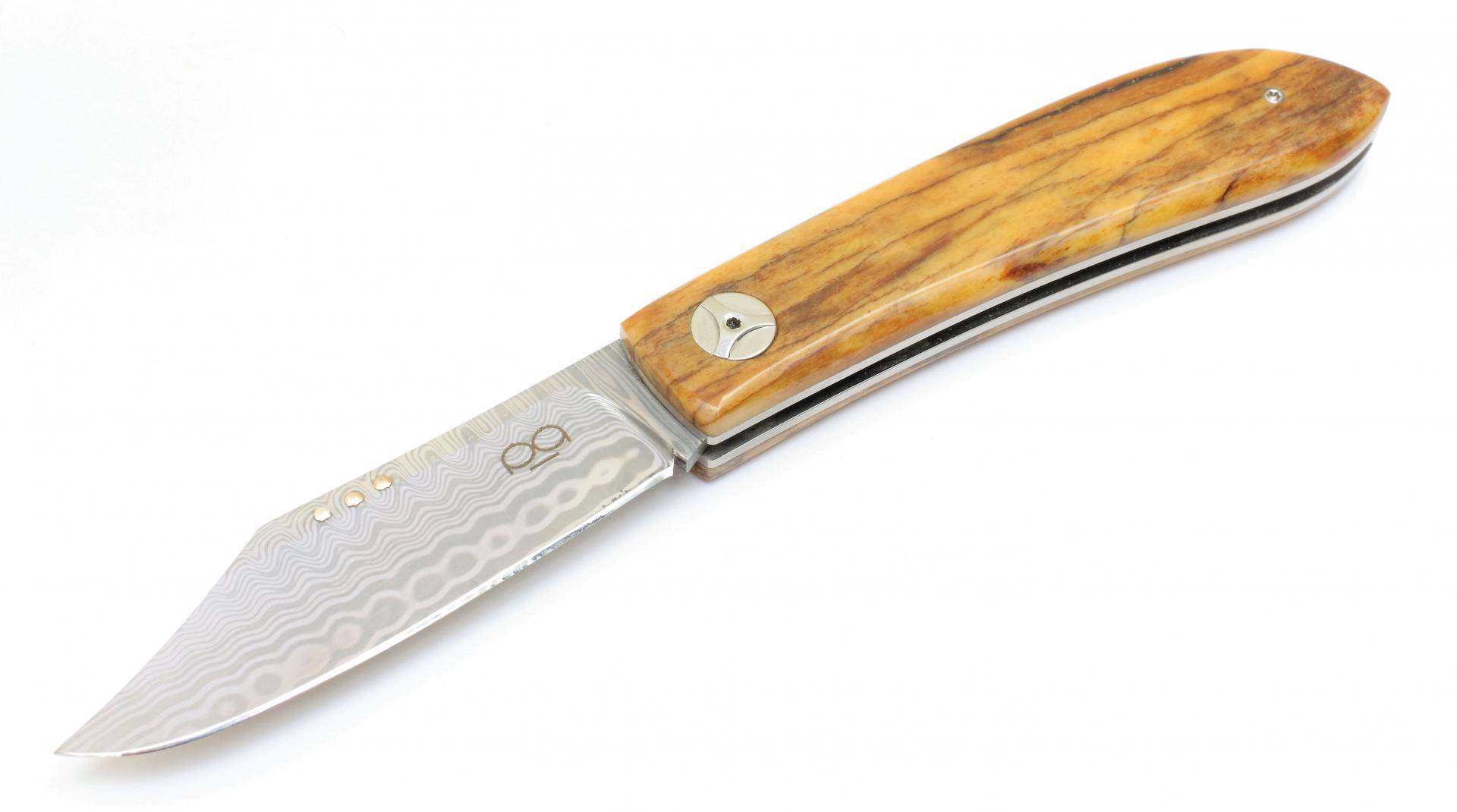 The ‘Slippy’ by Pieter Annandale. As the name implies, it is a slip joint folding knife, with a Damasteel
blade and giraffe bone scales. The blade pivots on ball bearings and has three small silver thumb studs.

Benjamin Thuillier (MTBlades) made this remarkable Grizzly. Blade is 52100 carbon steel with a selective
quench and acid etching, the handle is made of green dyed stabilized Maple burl, Thuya burl for bolsters
and pommels, and Malachite (green stone) and Marianite Jasper (brown stone) inlays.
The knife measures 29 cm.

A neck-knife by Albin Deloison with a simple name: # 083. The steel is D2, the handles are Micarta.
The overall length is 168 mm.

Chris Goldmann (Pegasus Knives) is a South African born knife maker, who lives and works in Portugal.
This is a ‘Utility Camp Knife’, with a RWL34 steel blade and handles of giraffe bone with red liners.
The giraffe was killed by a lion. 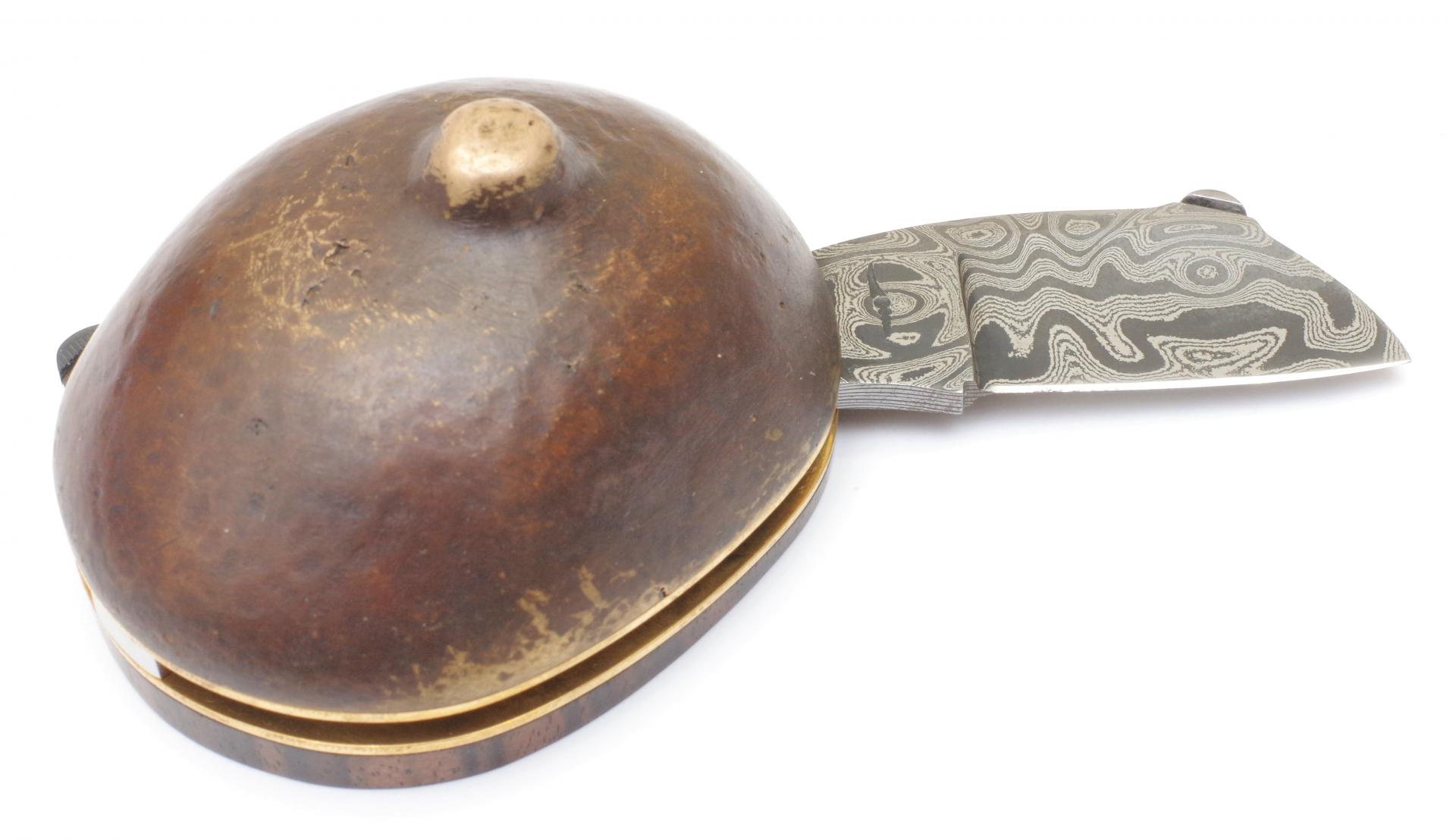 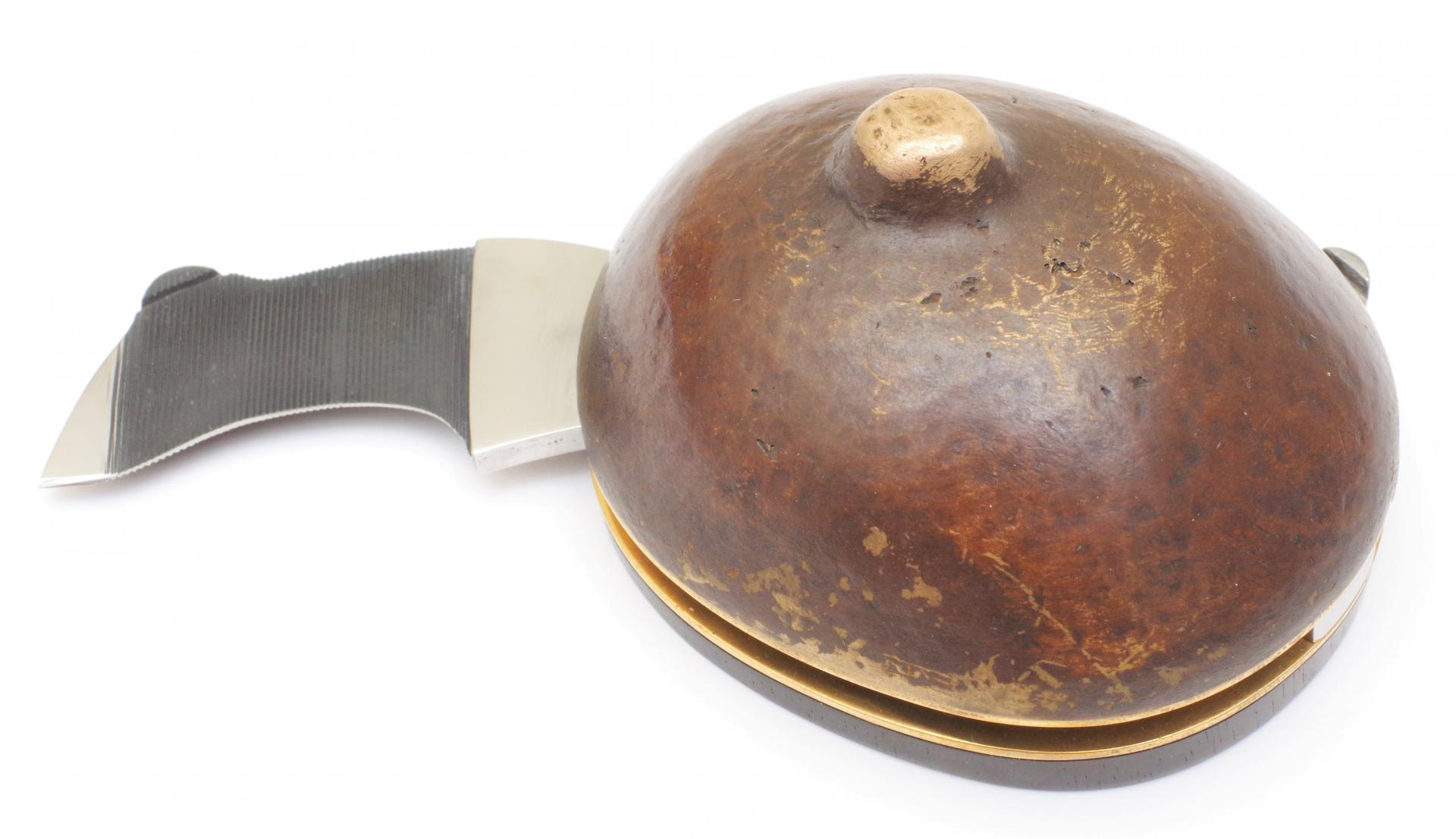 French knife maker Erwan Pincemin (La Roche du Feu) made this bronze woman’s breast featuring a
small knife in one side and a file on the other. The title of this work is “Couvre moi ce sein que je ne
saurais voir”, a quotation from the comedy Tartuffe by Molière. The knife’s blade is made of Paul Strande
damascene, the file is made of Z40C13. 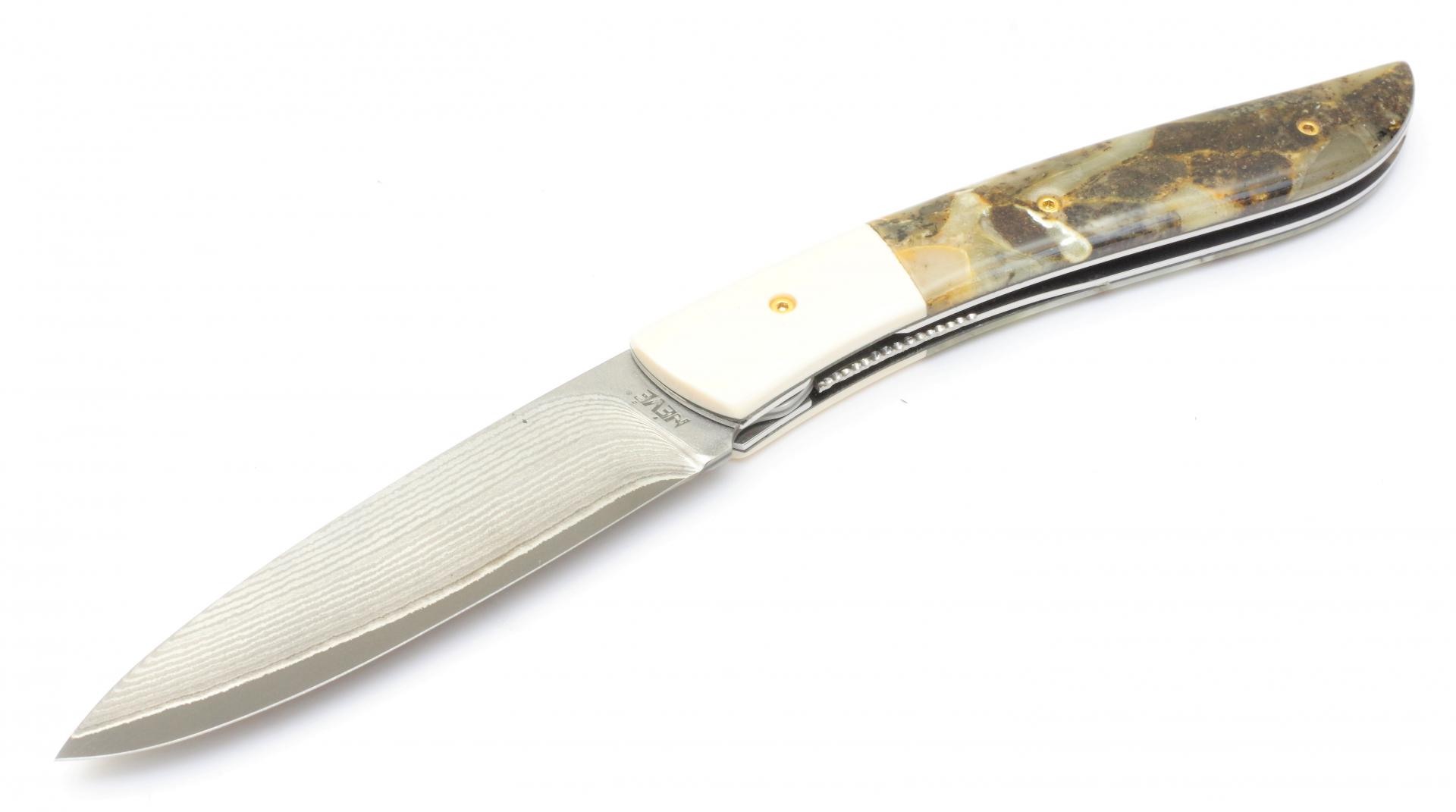 The ‘Névé’ by French knife maker Tim Bernard (Atelier Névé). The linerlock folding knife has a blade
made of VG10 Japanese Damascus and handles of mammoth ivory with amber, with gilded screws. 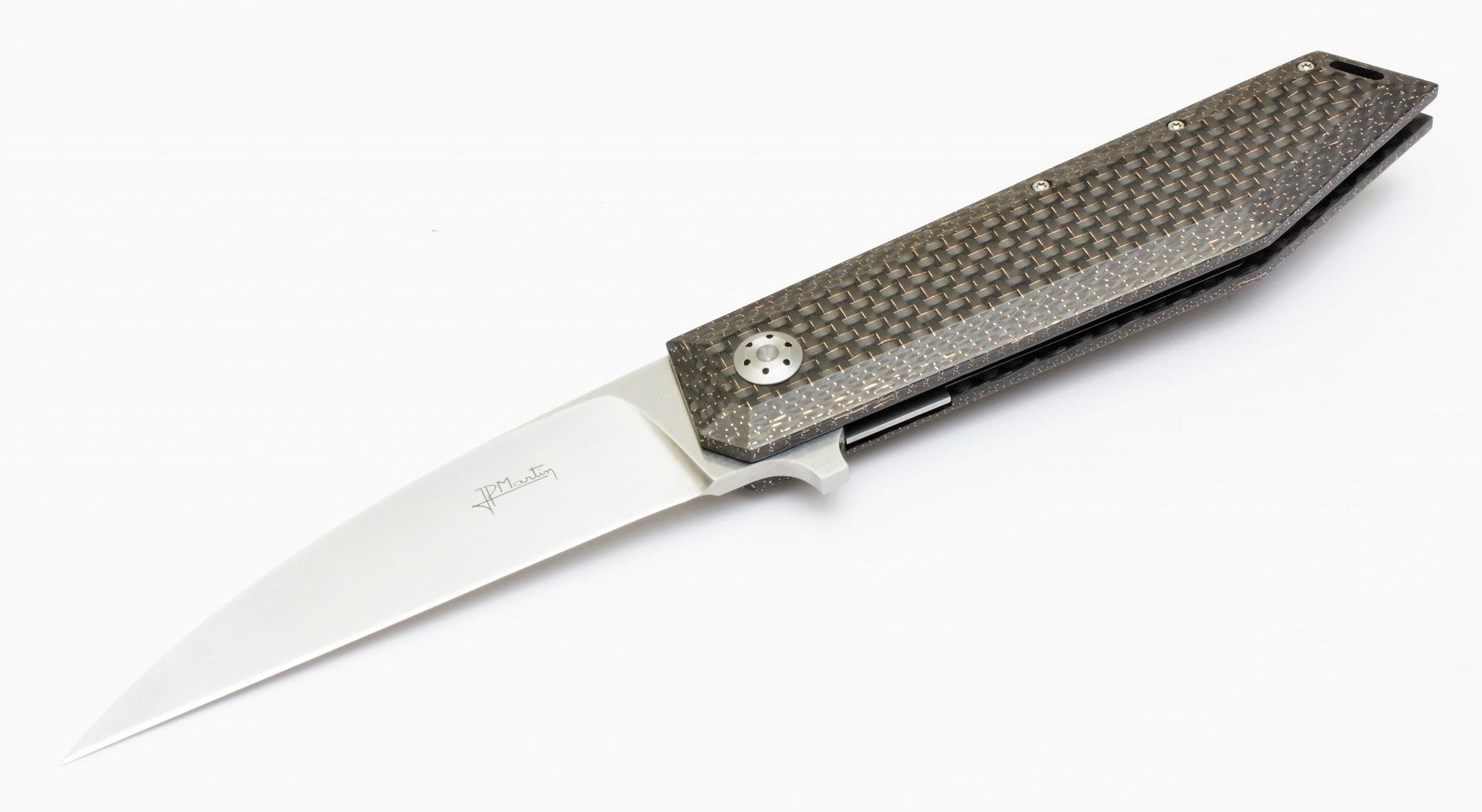 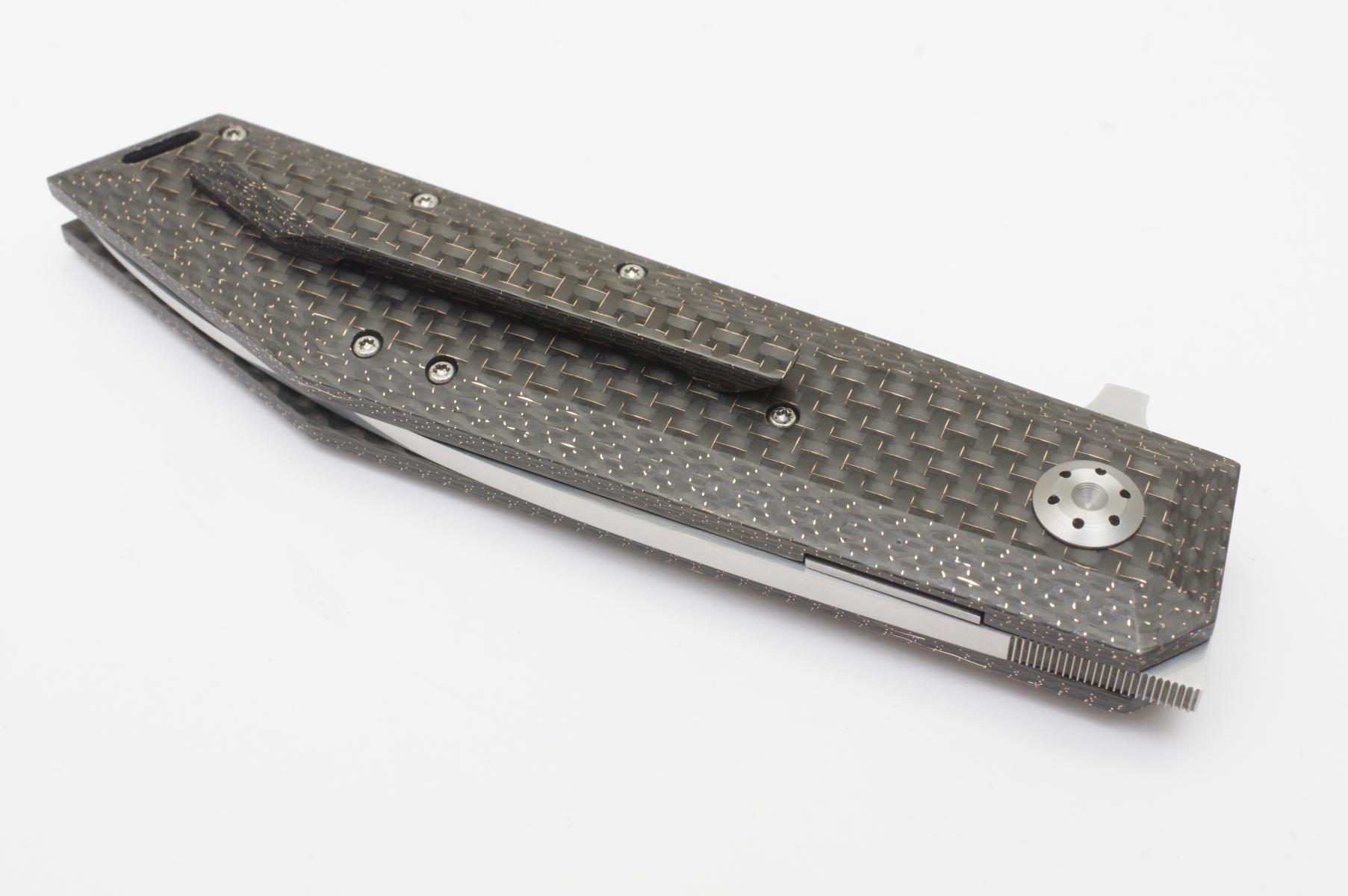 The ‘Furtif’ (furtive) No. 2 by French maker Jean Pierre Martin. The blade is made of C40 Carpenter steel,
the handles are lightning-carbon. The blade pivots on a ball bearing system of his own design.

Benjamin Lohou designed and made this Pradel, an ultra-flat folding knife. The blade is 14C28N, the
handle carbon fibre. 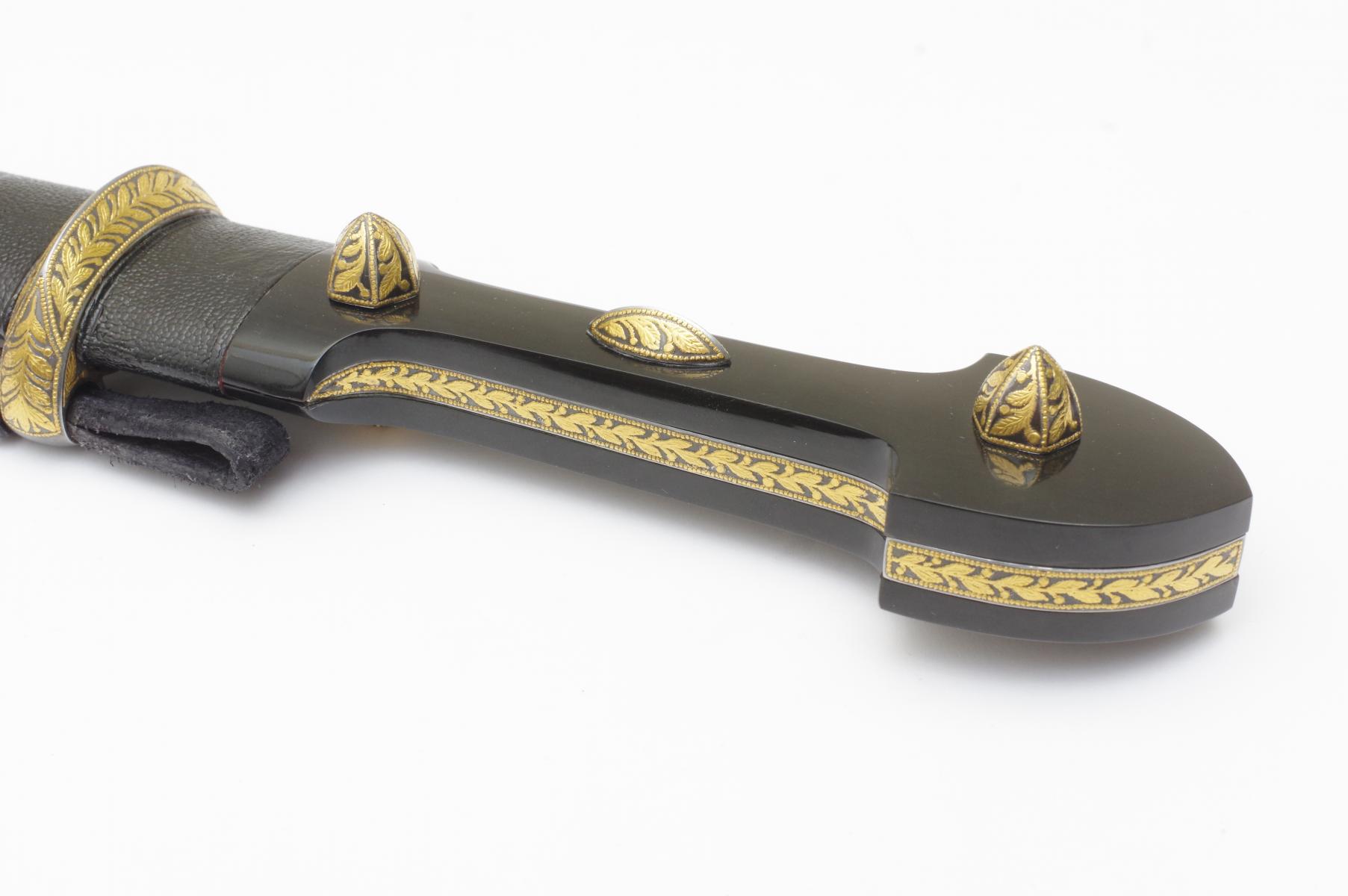 The ‘Ceasar’ from Gotscha Lagidse, a double dagger. The blade is made of Tolox 44, the handle is buffalo horn. 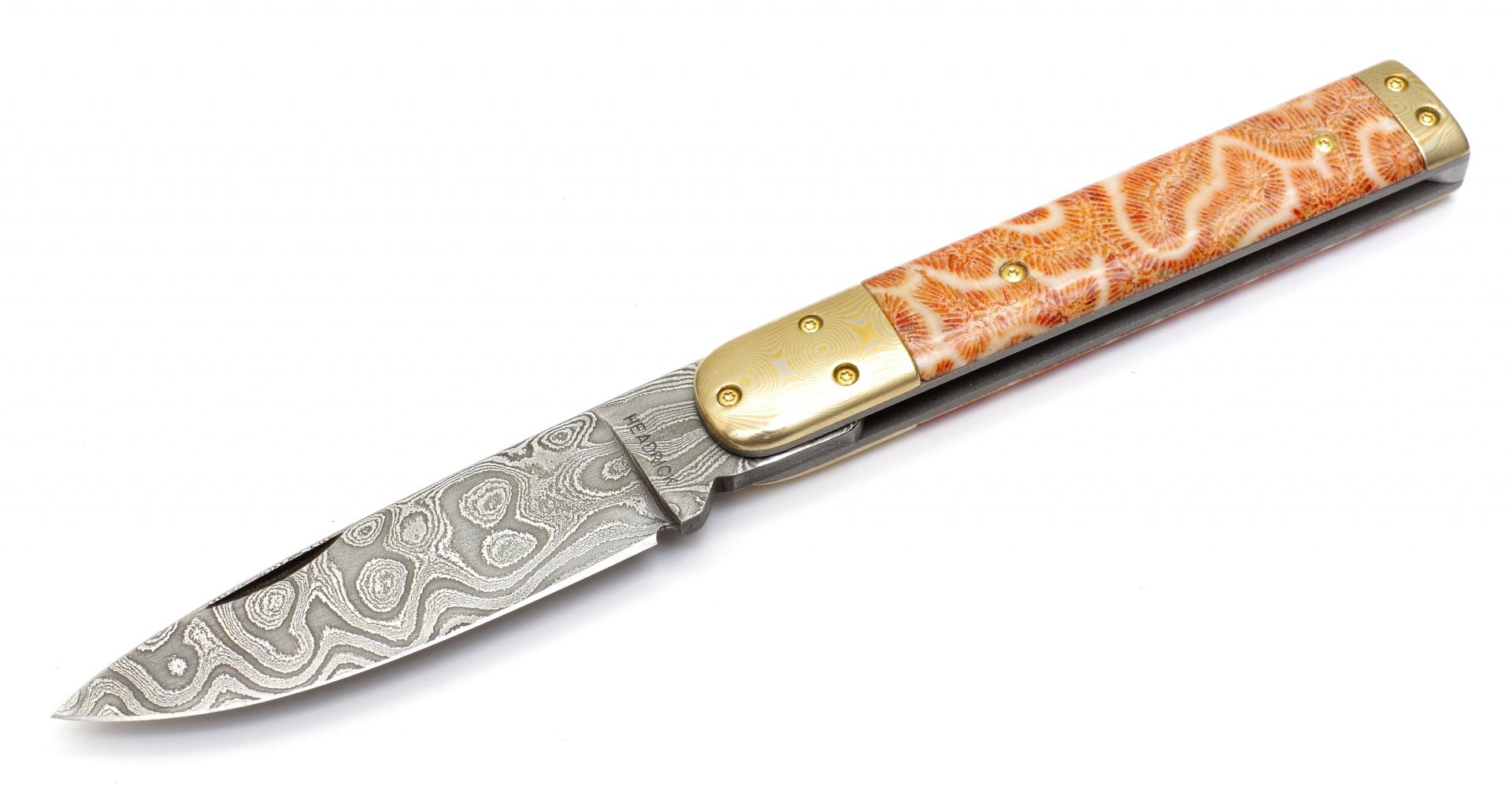 Gary Headrick simply calls this folding knife ‘# 7’. The blade is made of Daniel Vally carbon Damascus,
the bolsters are Mokume and the handles are brain coral. The opened knife measures 195 mm.

A linerlock folding knife by Stéphane Sagric. The blade is Nitrocut NCV60, the handles with internal liners
are made of carbon fibre. The pocket clip is titanium Damascene. The opened length is 18 cm. 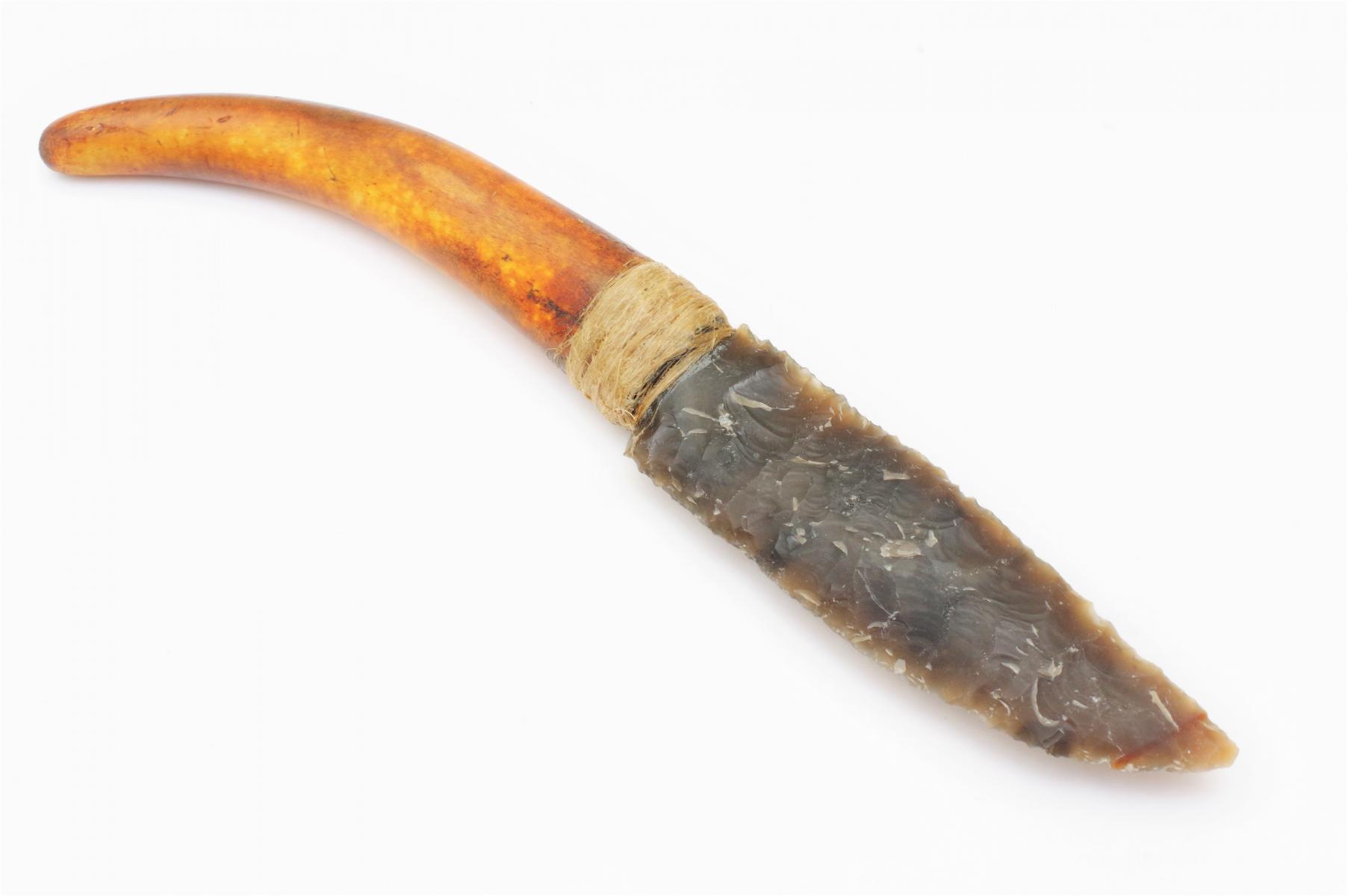 German knife maker Andy Goltz (Apeiron Bladeworks) has a very expressive style, as shown by this
Ganondorf #50. The blade of the frame lock flipper is made of Damasteel, the handle is Nichols Mokuti. 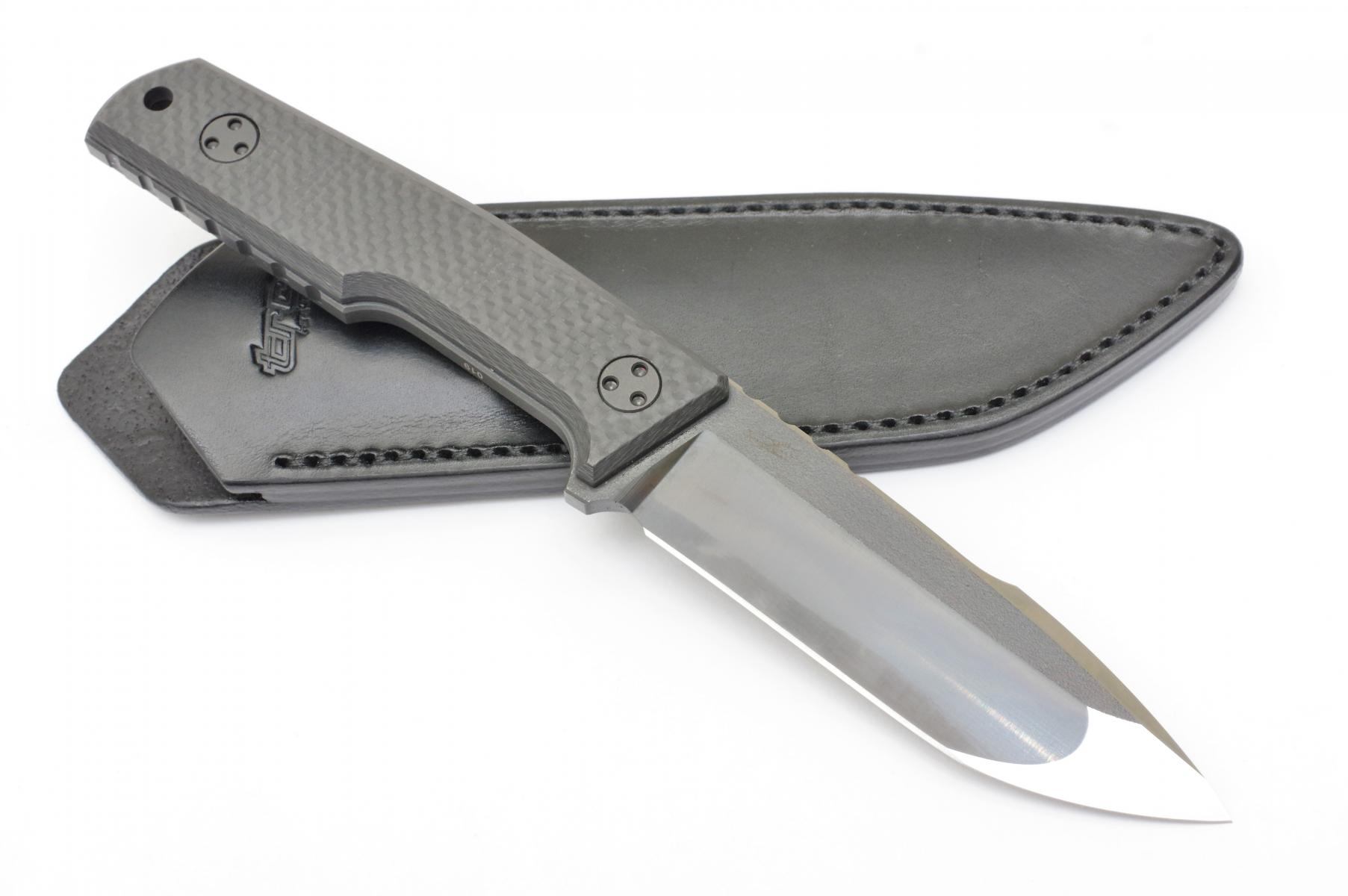 Andrius Tricus is a Lithuanian knife maker, working under the name of TRC Knives. He is specialized in
tactical knives, such as this ‘Urban Tactical Harpoon’. The blade is Elmax, the handle is carbon fibre.

A hunting knife by Christophe Andrian. The blade is selectively hardened 100c6 steel, the handle is leather
and deer stag.

A remarkable construction by German knife maker Armin Drumm. He calls this knife the ‘Round-Swing-Folder’.
Both the blade as the left half of the handle pivot to fold the knife. The blade is Multibar Damascene (1.2842
and 75Ni8). The handle has liners and red stabilised cherry wood. Fully opened, the knife measures 19 cm. 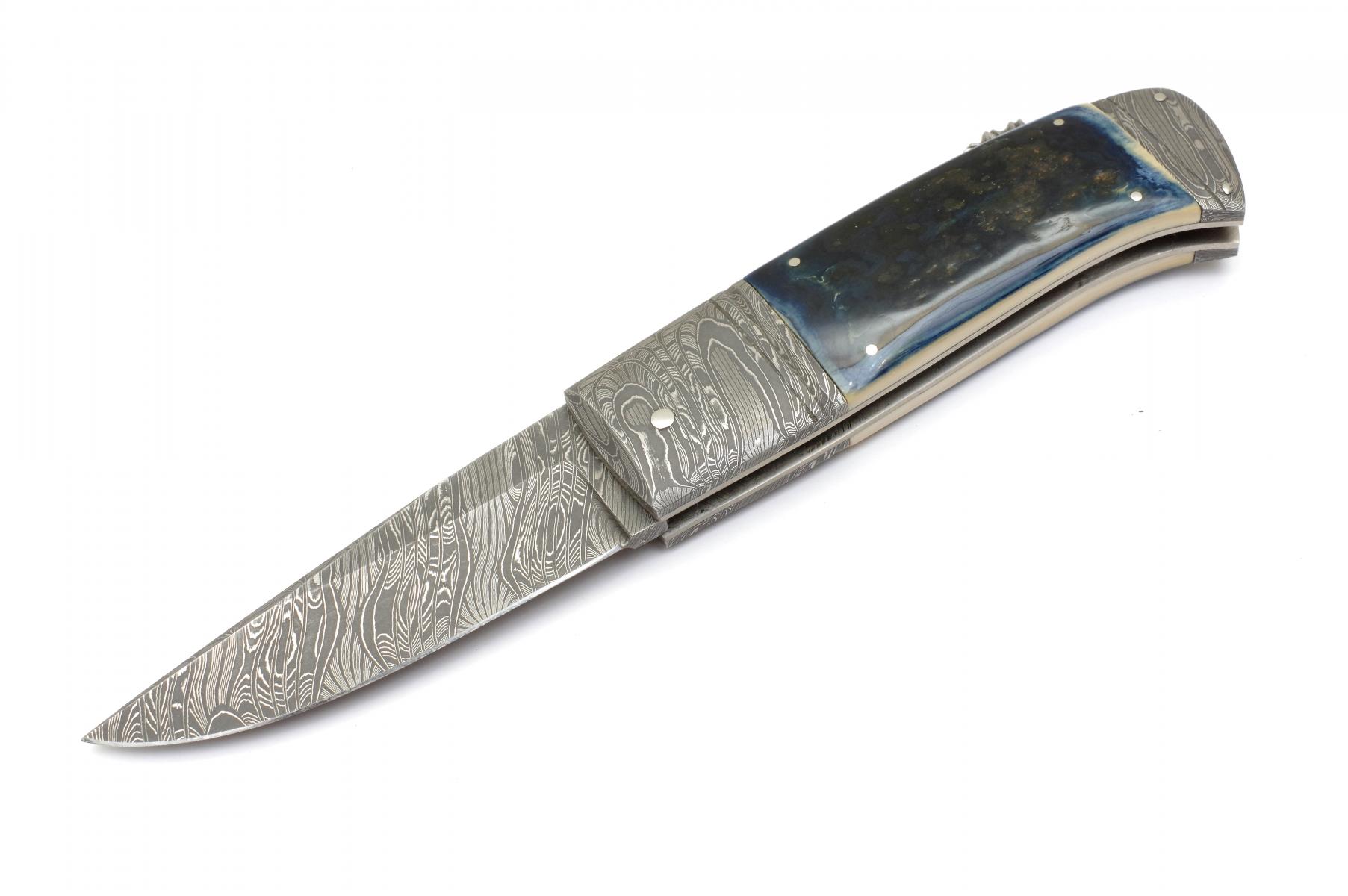 Father and son Alain and Joris Chomilier made this backlock folding knife shaped like a Puukko.
The knife is called ‘Deep Blue’. The blade is Mike Norris Damascene, the handle mammoth ivory. 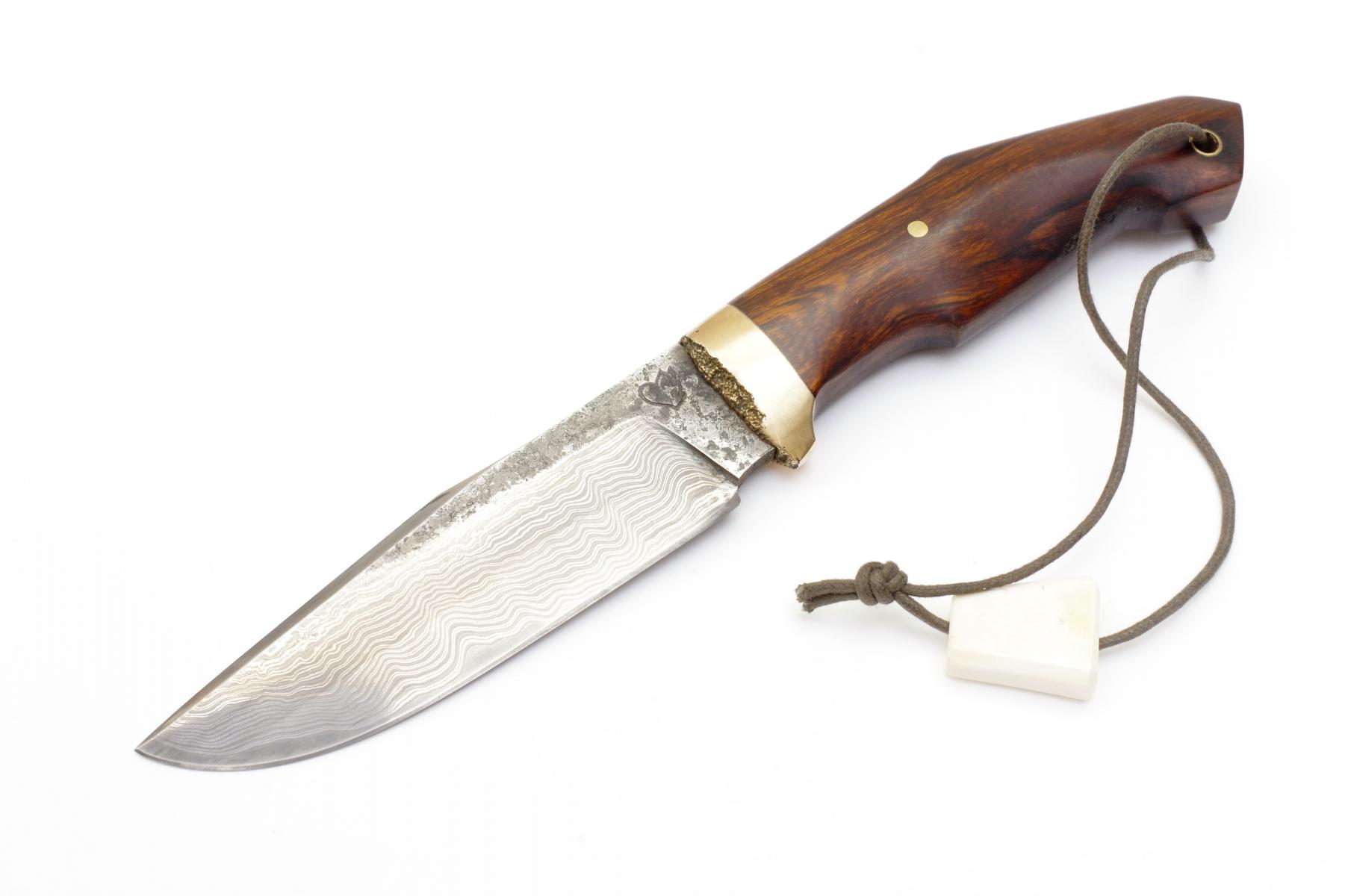 A fixed knife by Julien Vergnaud. The lade is damascene, the handle Ironwood with a bronze guard.
The knife measures ca. 21 cm. 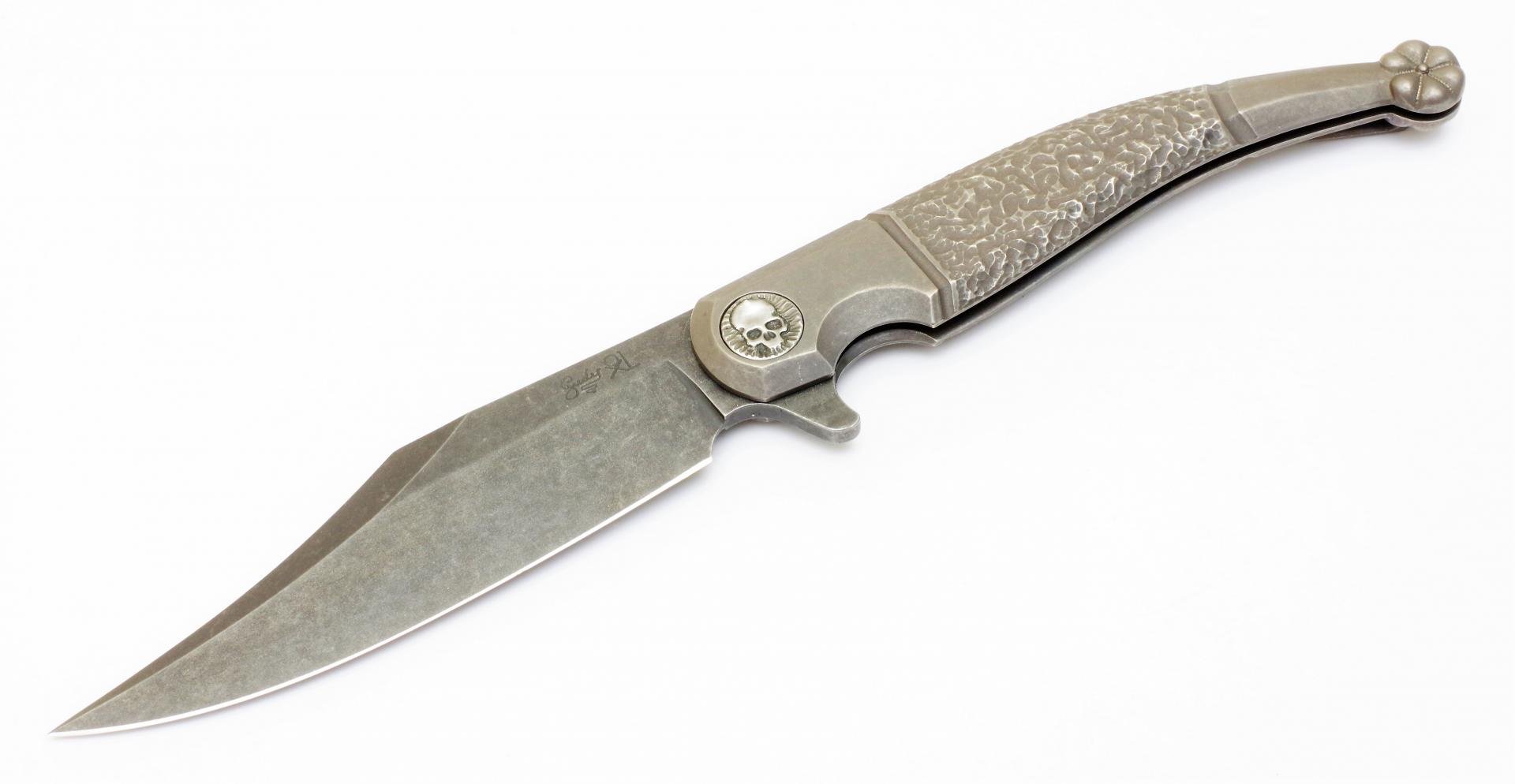 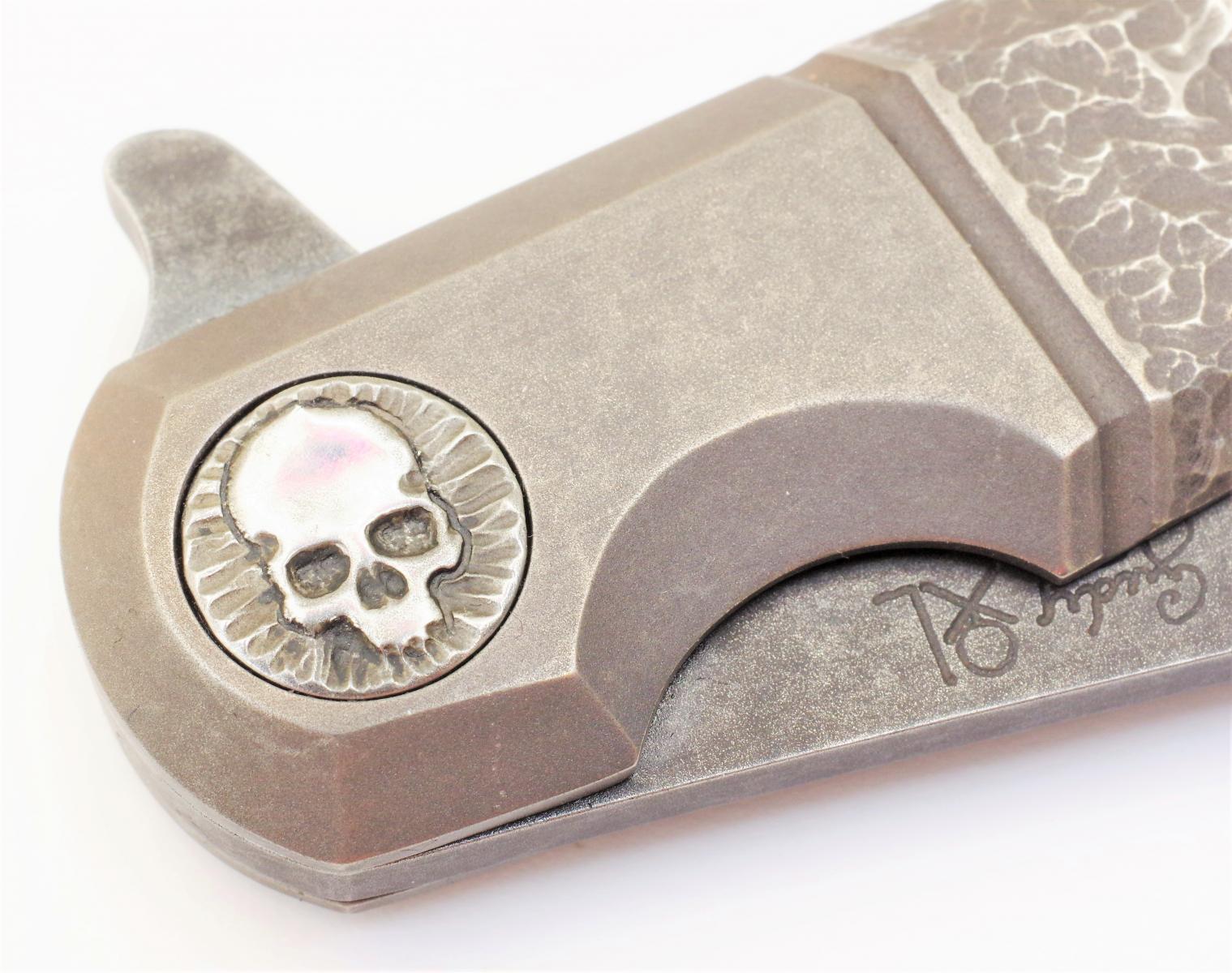 The Gitano by Dutch knife maker Gudy van Poppel (Popl Custom). The framelock folding knife has a RWL34
blade and a titanium handle with an engraved pivot. 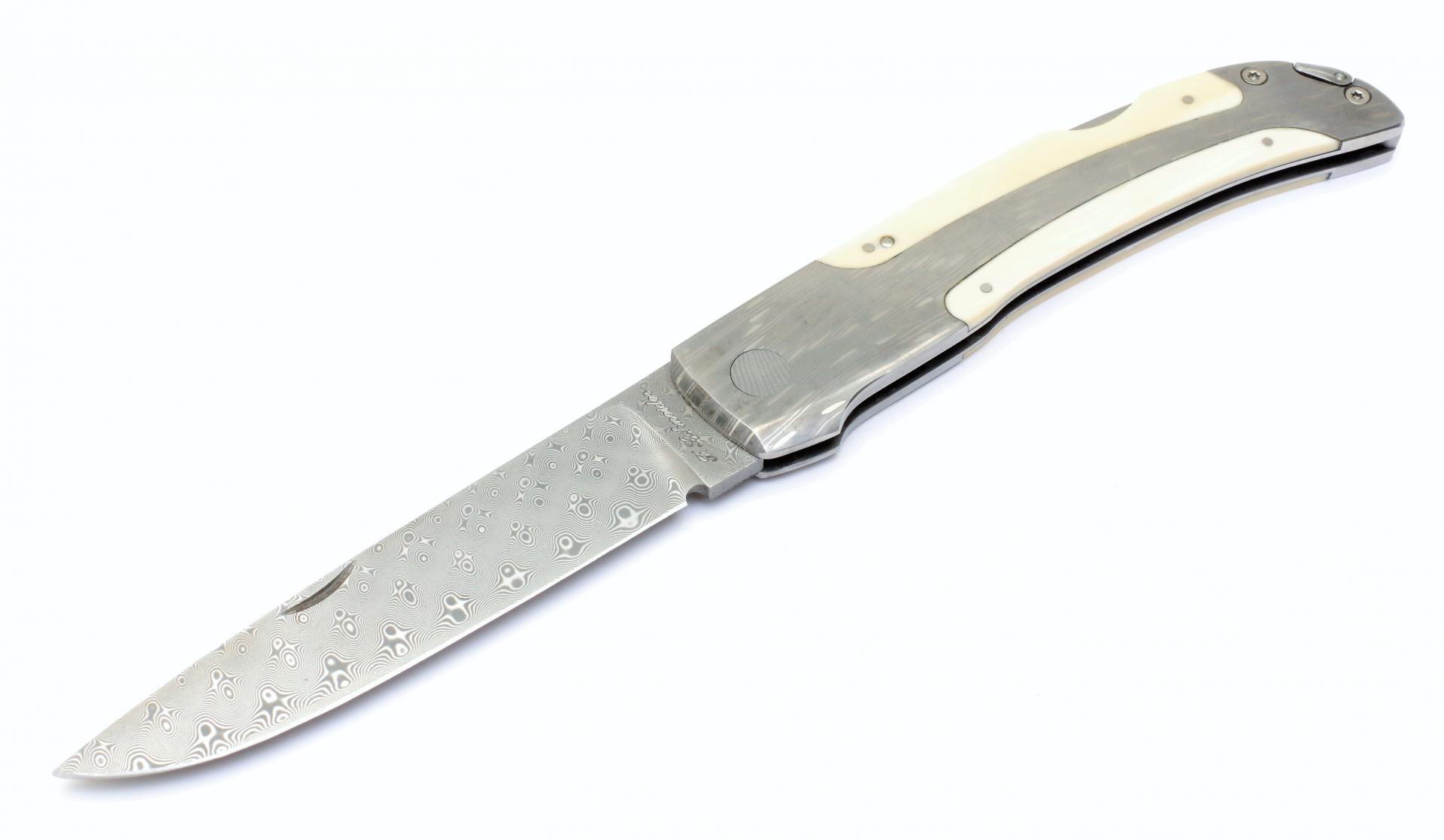 A wonderful folding knife by German knife maker Friedrich Schneider. The blade is Inox Damascus and
the handle is from fossil mammoth. The overall length is 215 mm.