The “Salon du Couteau et des Arts de la Table” in Lyon, to most people better known as SCAT, is in some respects a hidden gem. Both the two-day show and the city of Lyon deserve more international attention from knife enthusiasts. 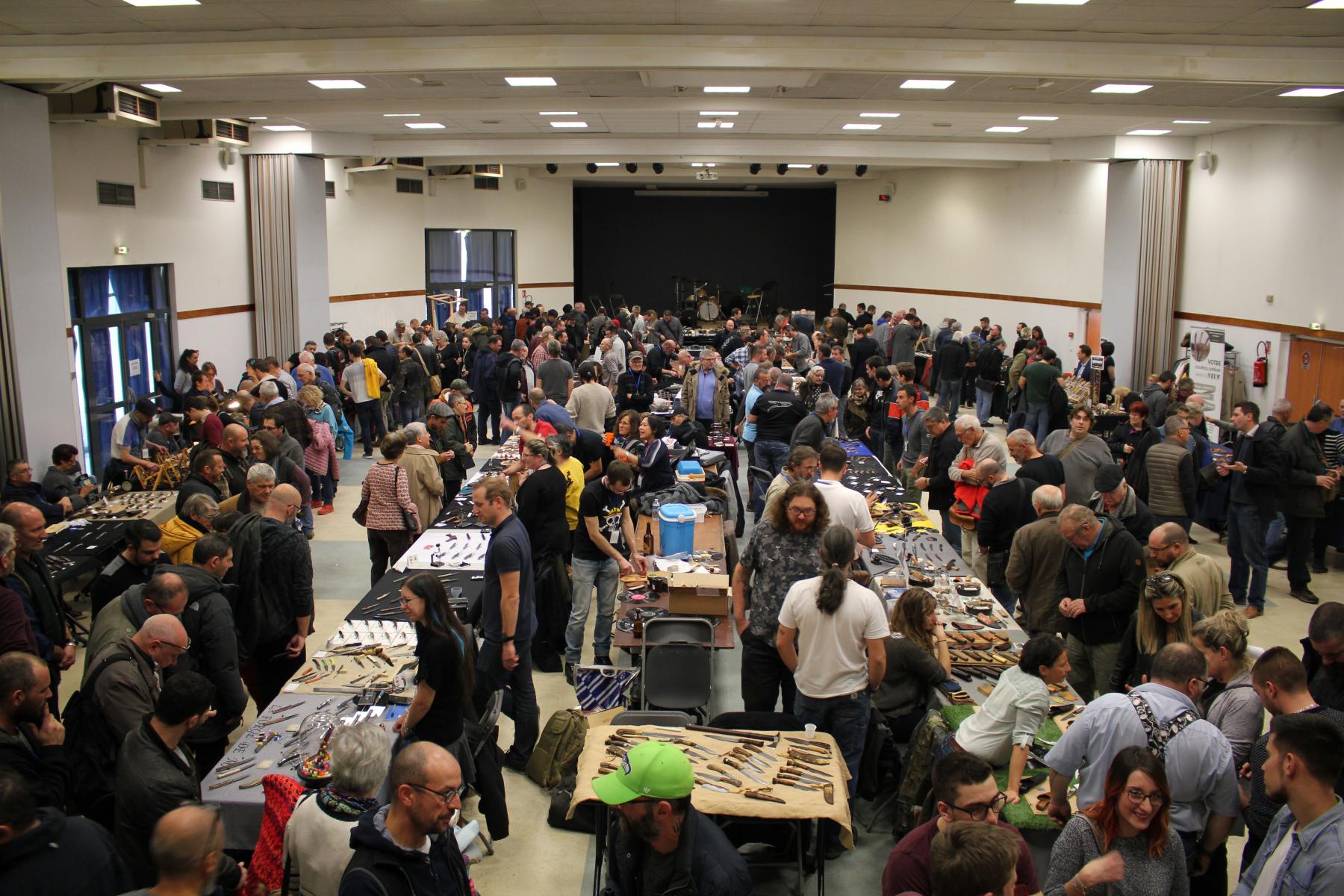 The SCAT (Salon du Couteau et des Arts de la Table) is a yearly knife show in the beautiful city of Lyon, a mecca for gastronomy in France. The “cuvée 2019” for the Lyon show, held on November 16 and 17, was exceptional, with a taste of success and a perfume of conviviality. Indeed, this year, there were no less than 1,600 attendees, including organizers, knife makers and satisfied visitors.
In a well-filled room throughout the weekend, the public was able to appreciate the work of the 73 craftsmen present, as well as the traditional cutting competition which took place outside; a great entertainment which pleased both the participants and the spectators. This year's winner was Pierre-Henri Monnet. We also find him in the prize list of the SCAT competition, whose theme this year was the outdoor knife (survival, bushcraft). The winners were:
1st. Paulo Simoes
2nd. Pierre-Henri Monnet
3rd. Alexandre Deltour
A small emotional sequence took place when, on stage, the young Tiago invited his "Papa" Paulo to come and get his first prize, as well as the jury's "Coup de coeur" prize. A double reward for this talented and very sympathetic knife maker. 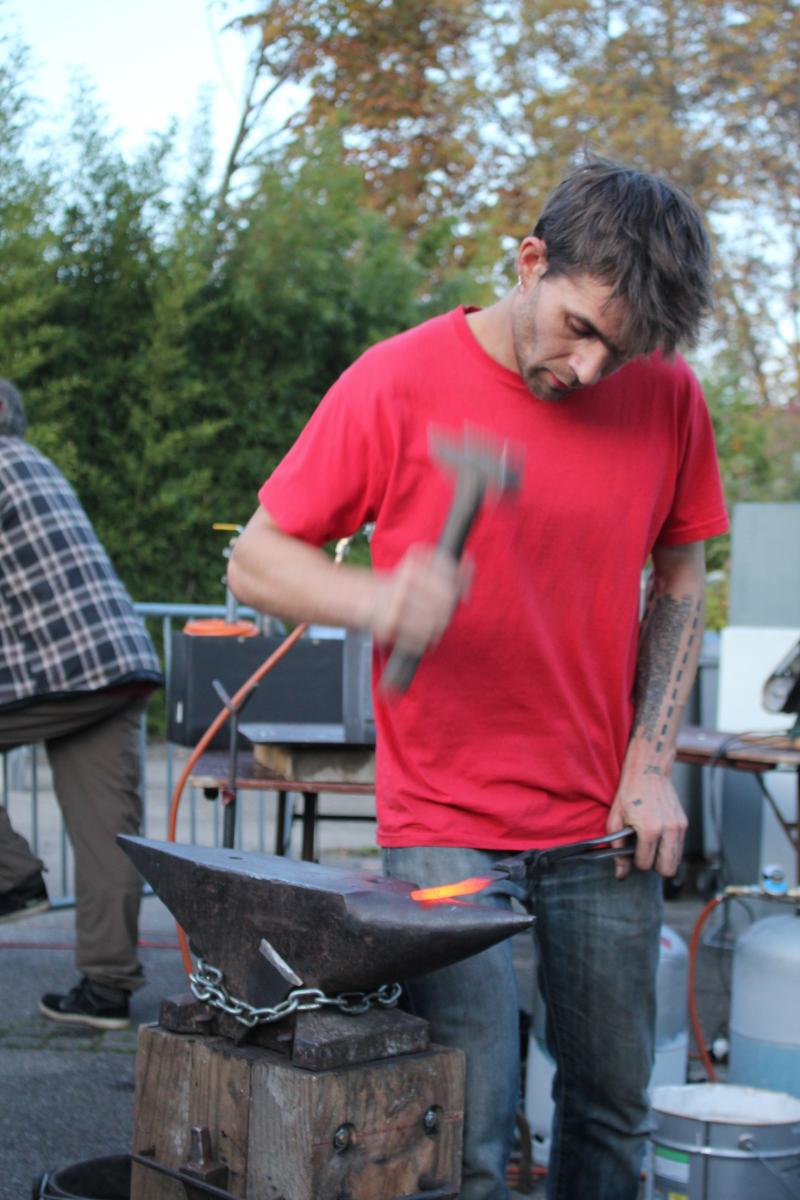 Finally, a little word from the organization: "This year was the best of SCAT! A show made by cutlers for cutlers! The SCAT is meant to be a friendly and family show and we do our best to make the exhibitors feel comfortable and have a good time! This year a very big effort has been made on promoting the show, which has paid off. The dates of the 13th edition have already been set: November 14 and 15, 2020. We are waiting for you!"

The appointment is made, on the way to new adventures!
No knife show without a forge. 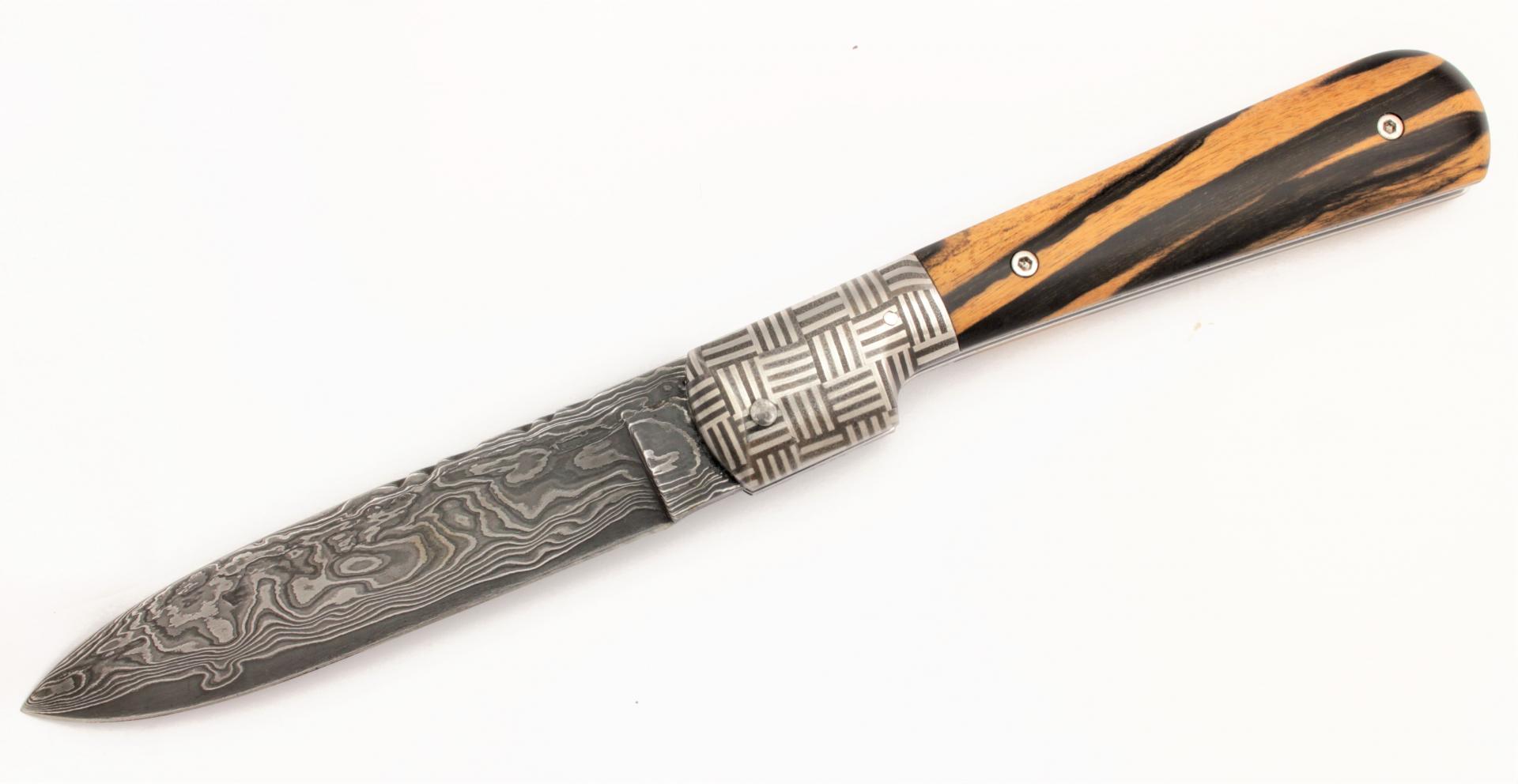 The “Vendetta” by French knife maker Anthony Pothier. The blade is 49 layers of Damask, the bolsters
are Damask and Inox and the handle is Royal Ebony.

The “Breizh Bougnat” from French maker Benjamin Carlou. The design of the knife is by Carlou and Fred
Belou. The blade is a combination of 16th Century iron with 30MCV8. The handle is Fat Carbon.

A fixed blade by French maker Benoit Maguin. The blade is XC 100 steel, the handle and guard are a combination of Bronze, Titanium, Mammoth Ivory and stabilised Walnut. 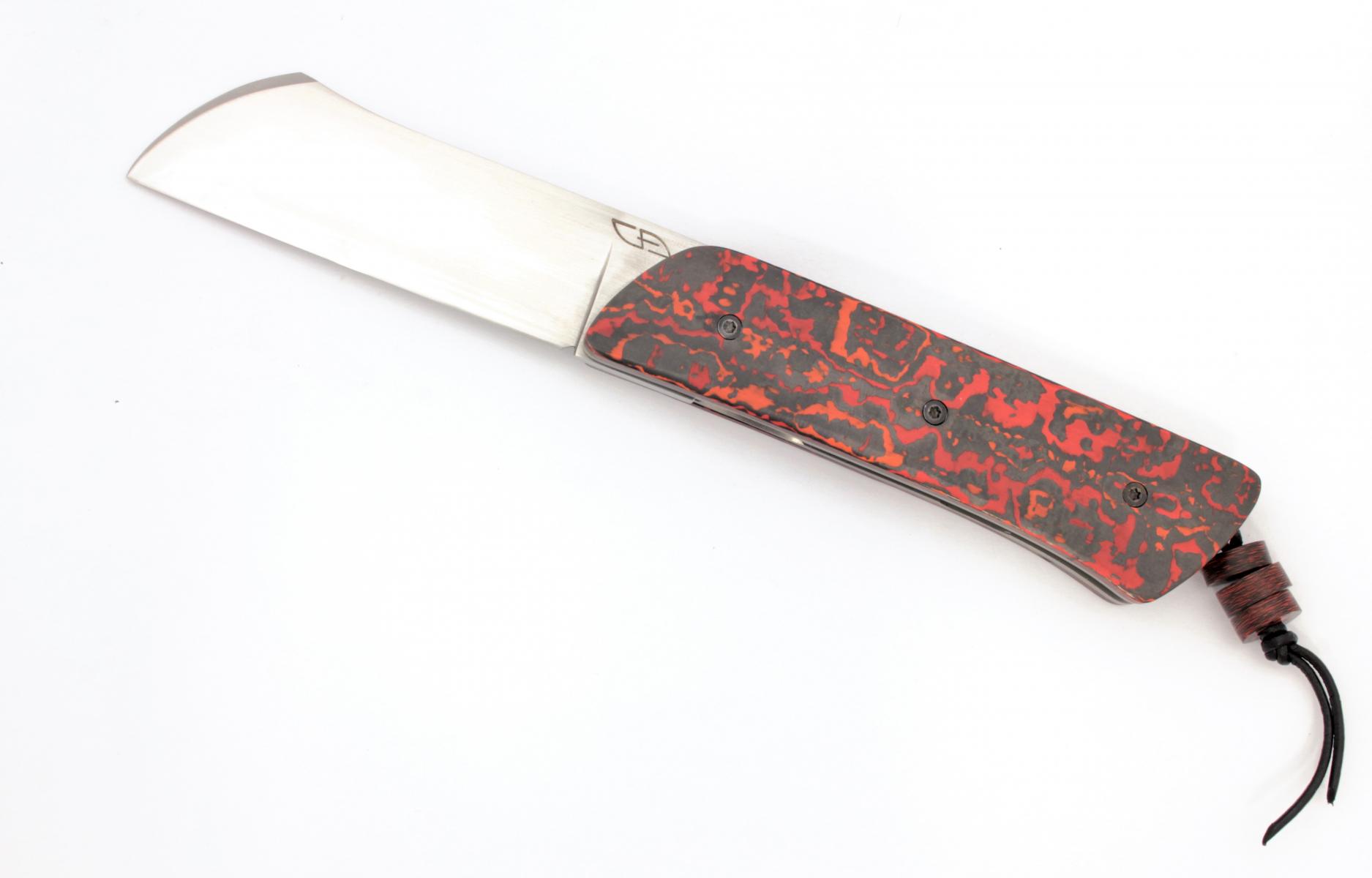 Christophe Arbogast from France made this “Carafon” liner lock with ball bearing. The blade is 14C28N,
the handle scales are Fat Carbon. 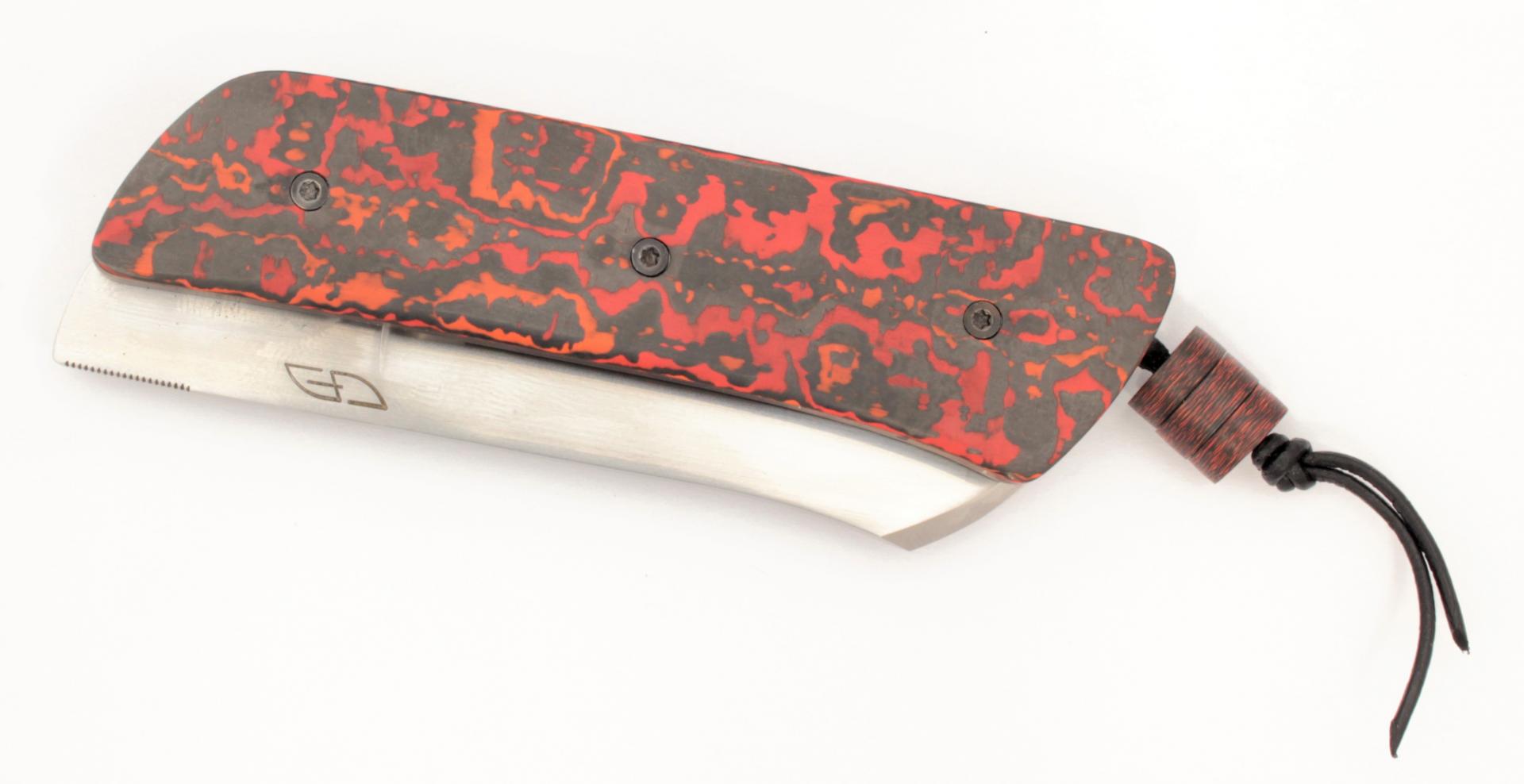 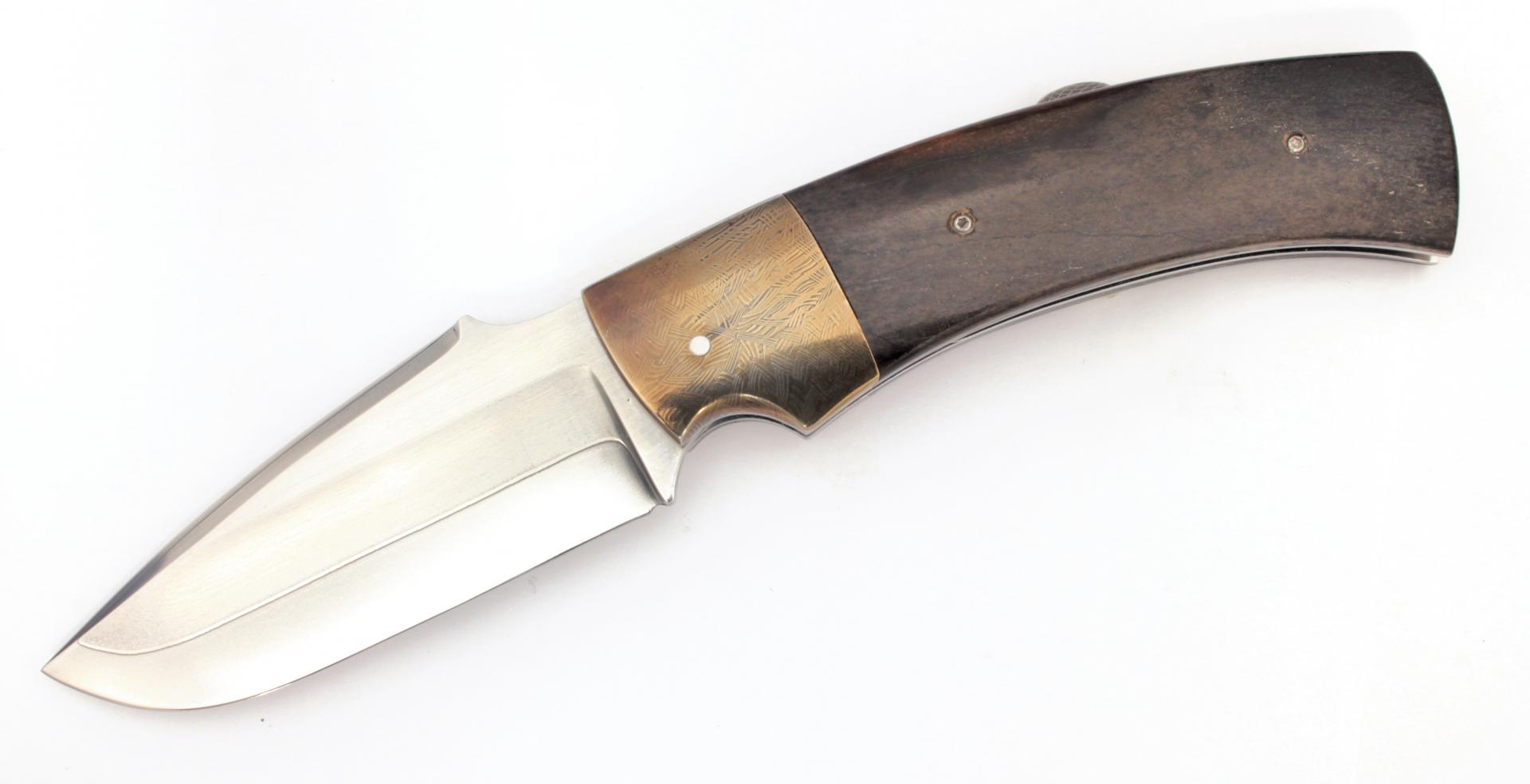 “Le Kodiak” (the Kodiak) is a back lock folder by Eric Depeyre. The blade is VG10, the bolsters are Damask
and the handle scales are Mammoth. 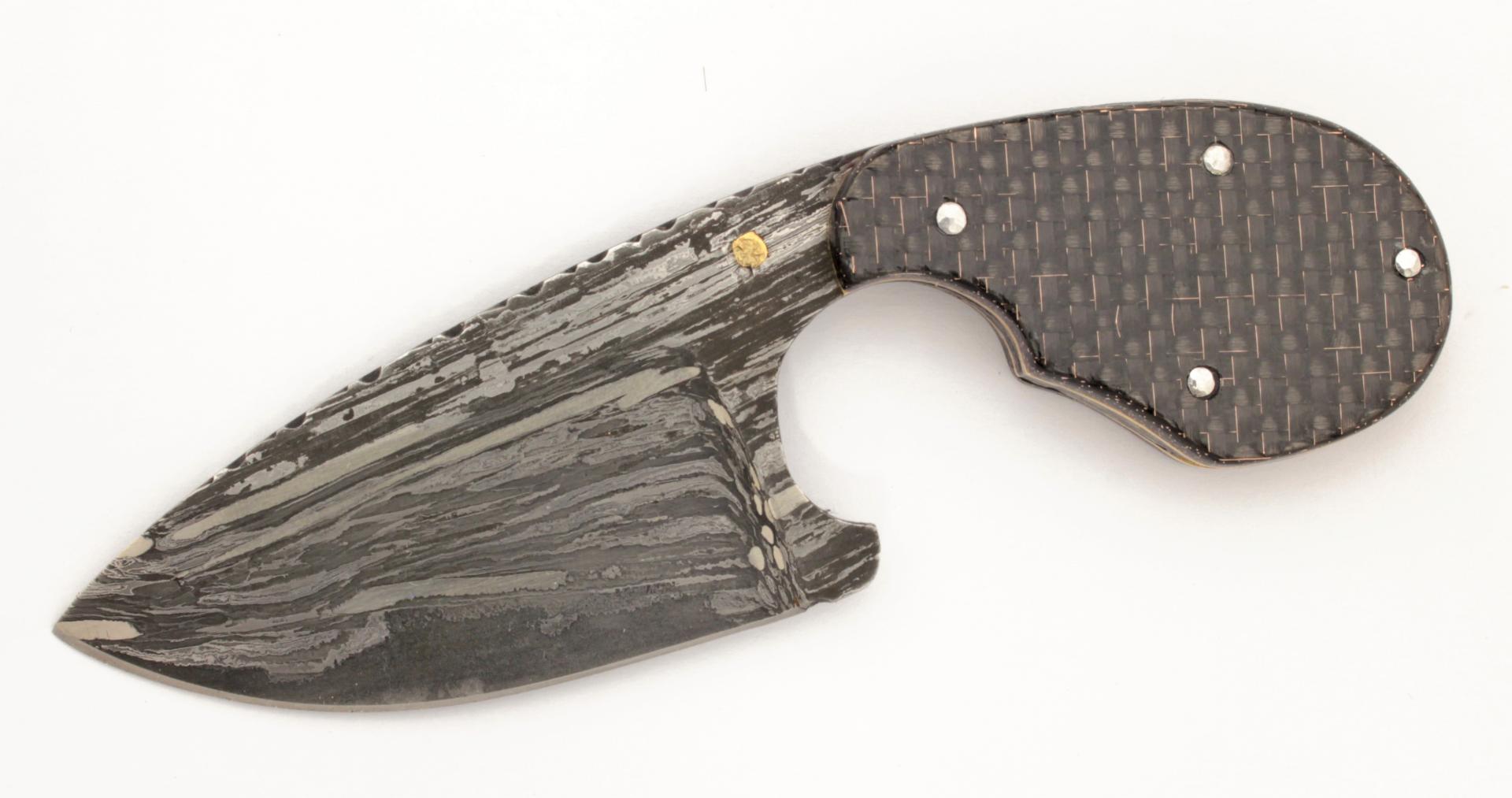 The “Kwet” by French maker Flo Barou. The blade is sandwich Damask, the handle has Brass liners and
Lightning Strike Carbon Fibre scales. 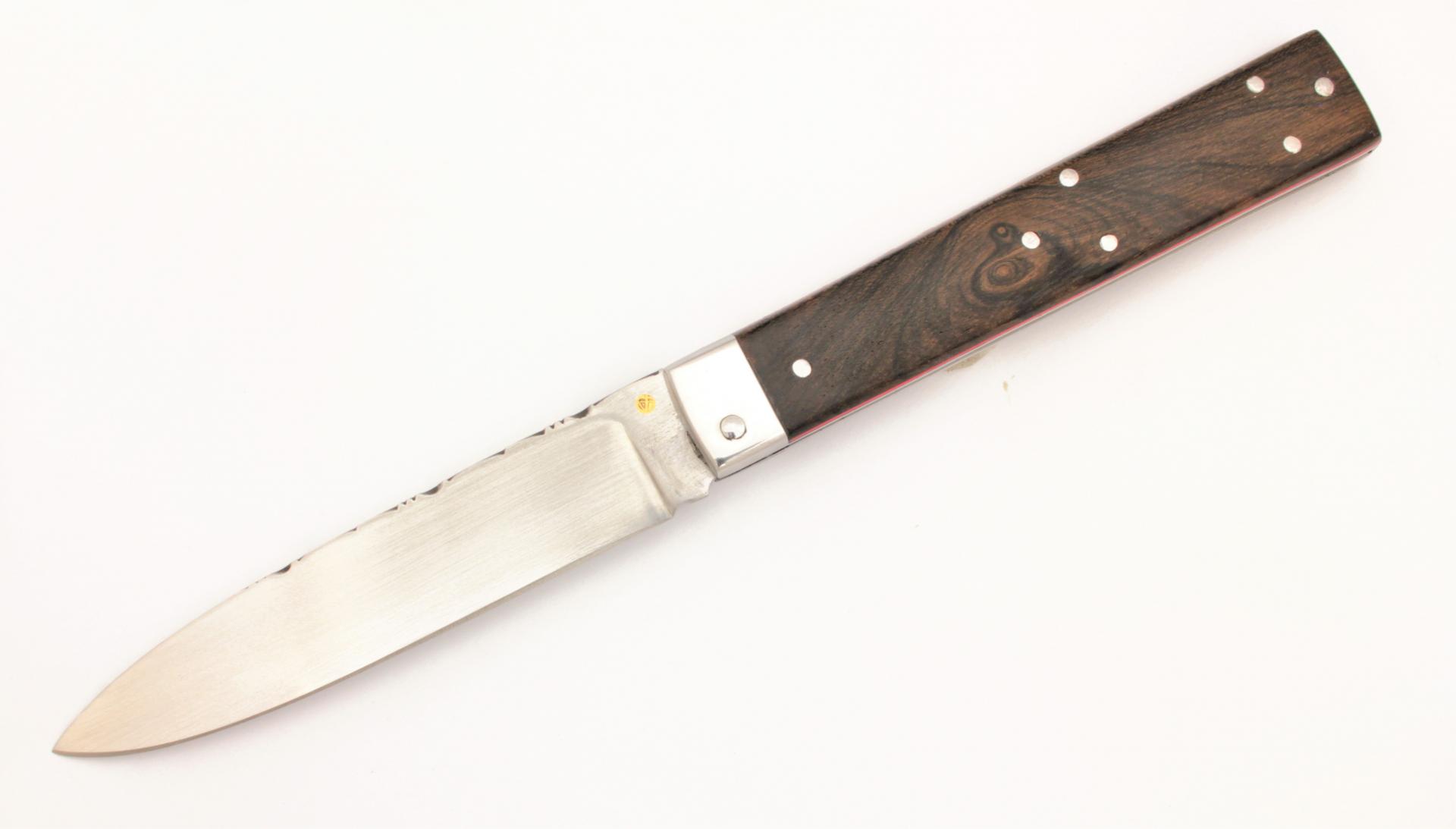 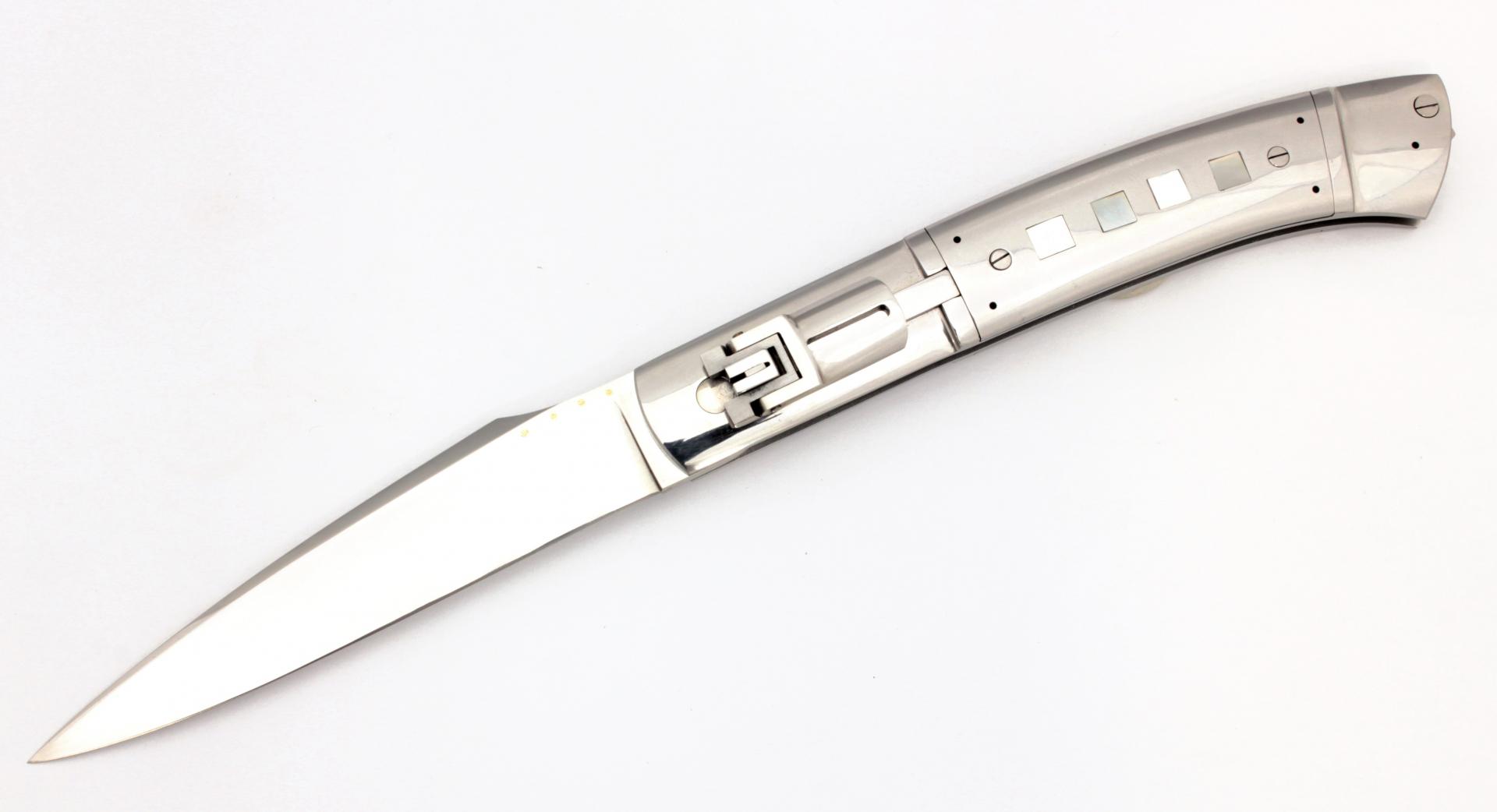 French knife maker Guillaume Ducasse called this knife “Pixel”. It is a lever action automatic knife, with
a 9 cm blade from 14C28N steel, an Inox bolster and handle inlays of white mother-of-pearl and 9K gold.
The screws are home-made from hardened steel.

Jean-Jacques Bernet showed this traditional Corsican knife, with a 200 layer Damask blade and a horn handle.

The “Lo-Primé” liner lock folding knife by French maker Loic Villeneuve. The blade is RWL-34 steel, the
liners are titanium and the handle scales are Padouk and Olive wood, divided by a stripe of walnut. 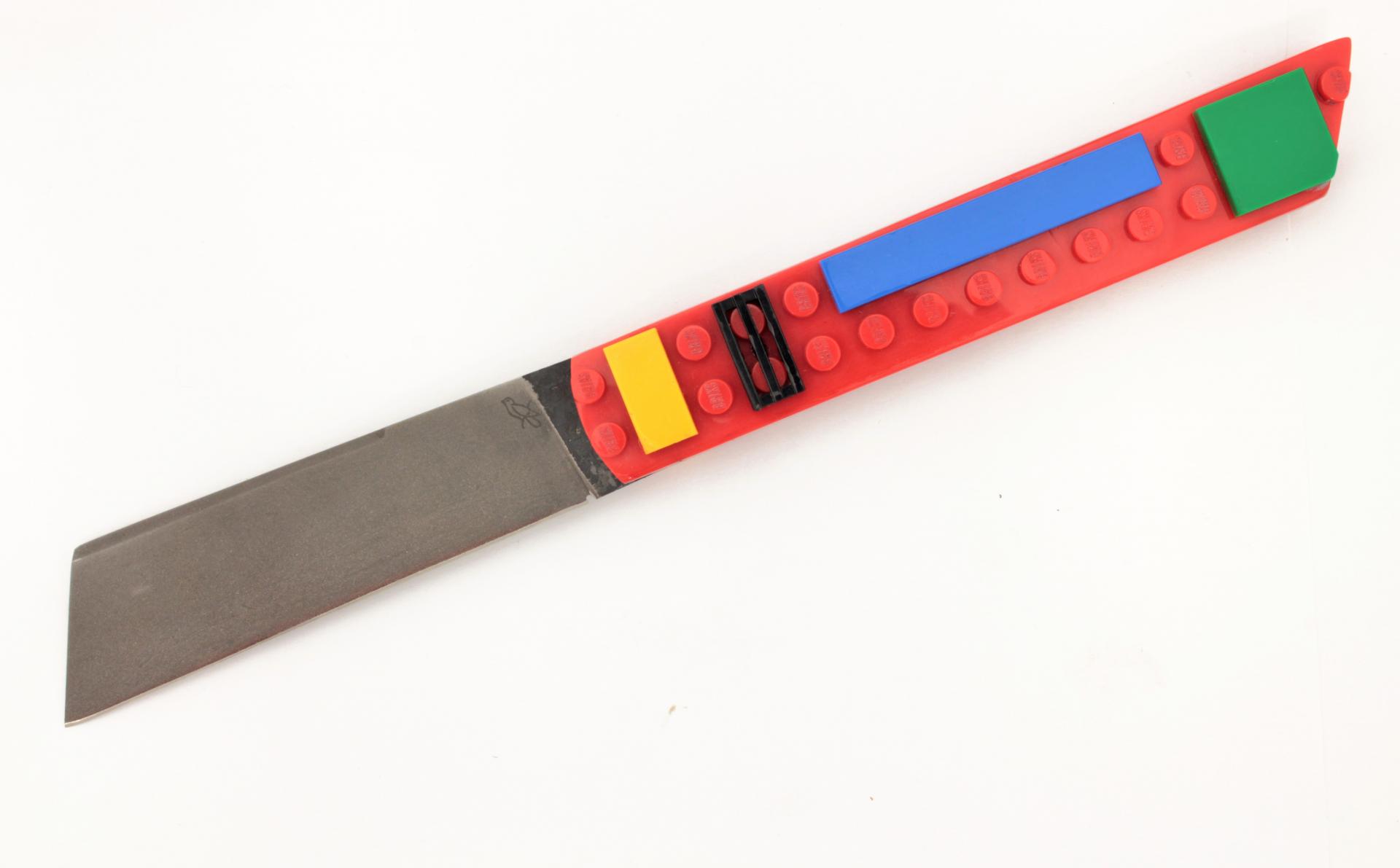 Lego pieces have been used in almost every conceivable role, but French knife maker Maxime Rossignol
found an original use as knife handle scales. His notched slip joint folder has a N690 blade and steel liners.

A friction folder by Pat Rélot. The blade is sandwich Damask from pure iron and 15N20 with a 90MCV8 core. The handle is black horn, fastened with two nails. 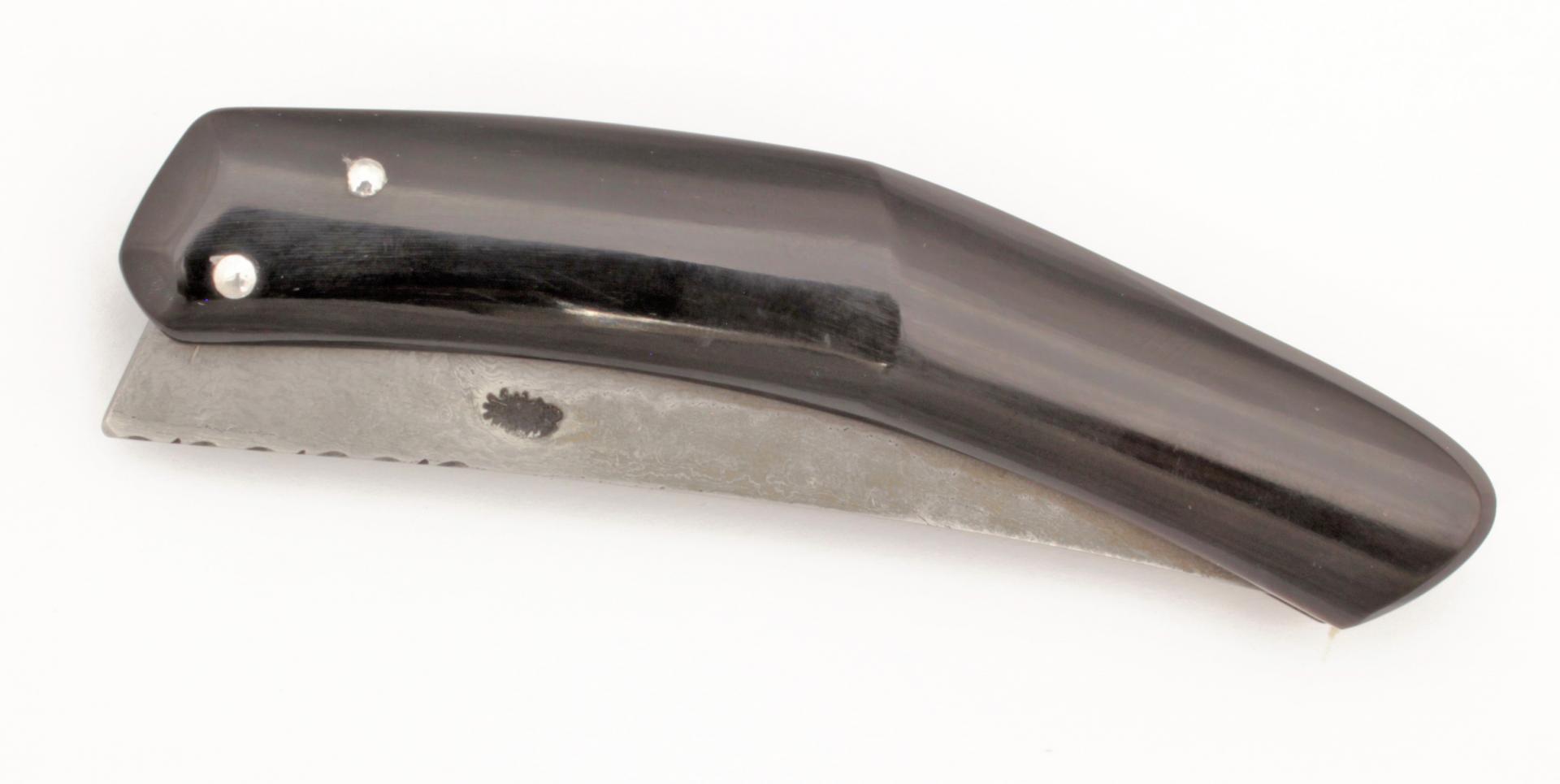