Preview: Solingen is back

Solingen is world renowned when it comes to blades, but it has never managed to organise a joint event with artisanal knife makers, the knife making industry and the blade museum. Until now. On 14 and 15 May this year will be the first edition of the new Solingen Blade Fair, named: ‘Knife 2022’. 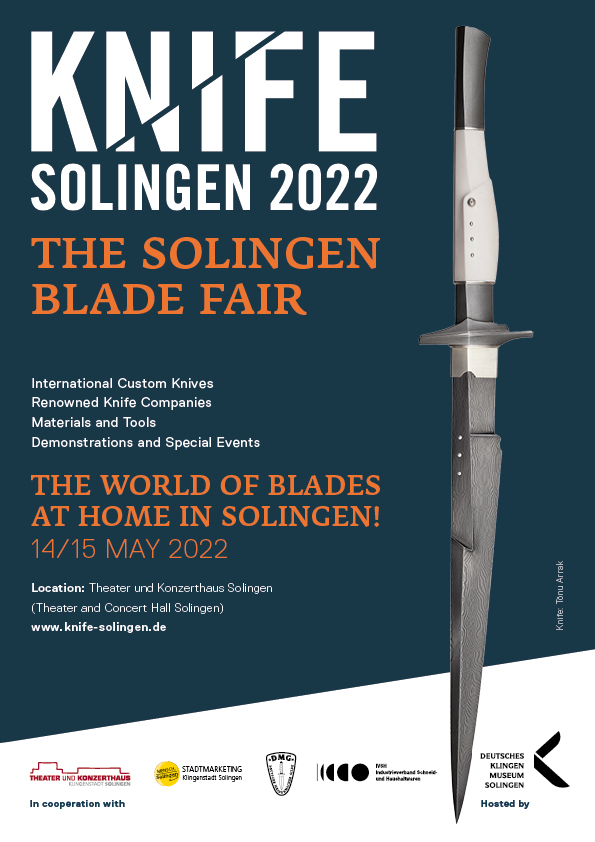 For many years, the yearly spring exhibition of the German Knife Makers Guild in Solingen has been a favourite among knife-lovers. The two-day show has always drawn a large audience and featured some attractive side shows. But there were some problems. Stricter safety regulations made the German Blade Museum a less convenient place for the show. With almost 100 exhibitors and ca. 2000 visitors the museum was filled to the brim. The museum itself preferred to invest its time on a major rearrangement of the permanent exhibition. In 2017, the two-day show became a one-day show, in 2018 there was a four-day event called Solingen Knife Days, but then it stopped altogether.
Of course, this came as a big disappointment for exhibitors and visitors. But there were ideas for something bigger and better than before. May 2020 was planned to see the first edition of a new event: “Knife 2020. The Solingen Blade Fair” – which then had to be cancelled because of the pandemia.
Fortunately, the participants have persisted. They are the Deutsche Messermacher Gilde, the Deutsches Klingenmuseum, the Solingen city council, and the Industrieverband Schneid- und Haushaltwaren, the Solingen blade industry. They venue, the spacious Solingen Theatre and Concert Hall.
The heart of the show will be hand-made knives by renowned international knife makers, both members of the German guild and others. There are already over 140 participants who have signed up, with a special rate for beginning knife makers under the age of 24. There will be a presentation by several Solingen knife companies, a barber to shave brave men (http://shesher-barbershop.com), demonstrations by Fechtzentrum (Fencing Centre) Solingen and from Alte Kampfkunst (Ancient Martial Arts) Wuppertal. There are special tours in the Solingen Blade Museum. Further details of the programme are worked on.
European Blades Mag. will be there for a full report. In the meantime, you can have a look at www.knife-solingen.de.