In the 1920s and 1930s, the German Altenbach family had a knifemaking company in Ohligs which, together with Gräfrath, Höhscheid, Wald and Solingen itself, was united to the city of Solingen in 1929. One of the family members was Otto Altenbach, who received a British patent for a folding pocket knife. Patent 332,873 was granted in July 1930.

Otto Altenbach must have been a very creative man. He received several patents, one of which has already been described in European Blades Mag. 44. This time, we have a look at his British patent 332.873, applied for on December 14, 1929. No similar German patent has been found.
Altenbach’s invention is a combination of a liner lock and a button-lock. His idea was to free the blade of the constant pressure of the spring. He describes this as follows:
“The present invention has for its object to provide a pocket knife or like implement of improved construction, wherein the pivoted blade or tool is opened and closed without the assistance of or the usual dangerous pressure of a spring, the latter however serving to lock the blade or tool in the operative position against movement in any direction. Such a tool is safer to use as the snap action in closing is obviated and further when open the blade or tool cannot close even if pressure be applied in the closing direction.”
In this construction, the blade was mounted between two side plates forming the handle, with a leaf spring (9) on the inside. The spring was pressed against the side by the blade when it was closed, and sprang inward when the blade was opened, to engage in a notch (13) in the rear of the blade. To close the blade, the spring had to be pushed sideways, which was achieved through a stud (15) which projected through an opening in the side of the handle.
Altenbach described various ways of attaching the leaf spring, and even envisaged the frame lock: “… the spring may be formed integrally with one of the side plates by cutting a strip partially out of the same and bending it inwardly.”
Just as in his previous patent, described in European Blades Mag. 44, Altenbach had equipped his pocket knife with several tools: a screwdriver tip (16) and a glass breaker and/or nail puller (17). To enable a safe operation of these tools, the blade had a large finger choil (14) which could be used as a bottle opener.
Even almost one hundred years later, the Altenbach pocket knife seems like a practical combination of knife and tool. Unfortunately we do not know if, and by whom, it was ever produced. 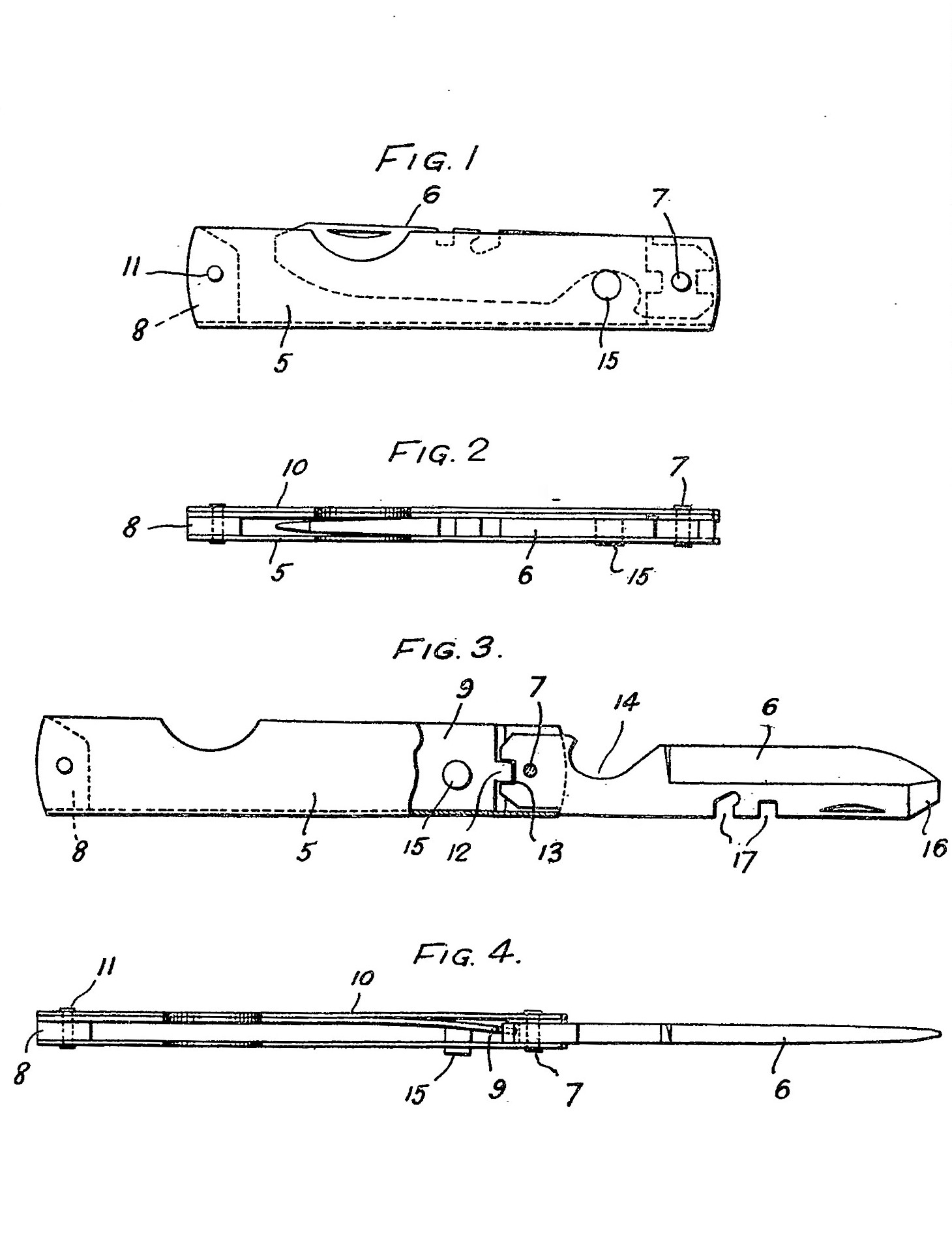