Patents: ‘A pocket knife with tools’

In 1928, Otto Altenbach from the Schwanenstrasse in Ohligs-Solingen, Germany, patented a knife with an extended blade-spring, shaped in the form of various tools, and a cover for these tools when they were not in use.

There were several Altenbachs working in the Solingen blade industry, but Otto is not mentioned as one of them. Yet he received several knife patents, mostly for the combination of a regular folding knife with different tools. One of his inventions was an extended blade-spring, protruding from the rear of the handle and shaped in the form of various tools: a screw driver, wedge, a wrench or a glass breaker. Realising that these exposed tools might damage the pockets, or even injure the bearer, a subsequent patent described different forms of a cover.
The drawings shown here are taken British patent 286,581. German patent 487 493 shows the same drawings, but in a different order.
At the time of the British patent application, in December 1927, Altenbach was temporarily residing in Los Angeles. Maybe this was a business trip; the British patent states that the applied for a US patent in May, 1927.
Although British patent 286.581 applies only to the tool cover, it shows the construction of the blade spring and tools as well. Figures 3, 5 and 6 show three different forms of the guard, to protect the bearer from these tools.
The first version of the cover consists of  a series of nested U-shaped sections, pivoting around a pin. When the tool is in use they can all nest inside the stationary section 16. When the knife is carried in the pocket, the cover sections are unfolded, as shown in Fig. 3. To ensure that the sections will form a continuous guard, they are provided with overlapping edges (25 and 26). These assure that when the smallest section is extended, all the other moveable sections must follow.
Fig. 5 and 6 show two other forms of the covers. In Fig. 5 these are two half shells (30 and 31) hinged at their back edges to the knife bolsters. In Fig. 6 the cover is a semi-circular guard made from thin sheet metal, hinged at the upper edge of the knife bolster.
Altenbachs invention – both the tools at the rear of the blade spring and the different types of cover – never became very popular. That may have been because of the moment they were introduced. The late nineteen twenties were a time of severe economic depression. Unfortunately, nothing is known about Altenbachs further life and career. 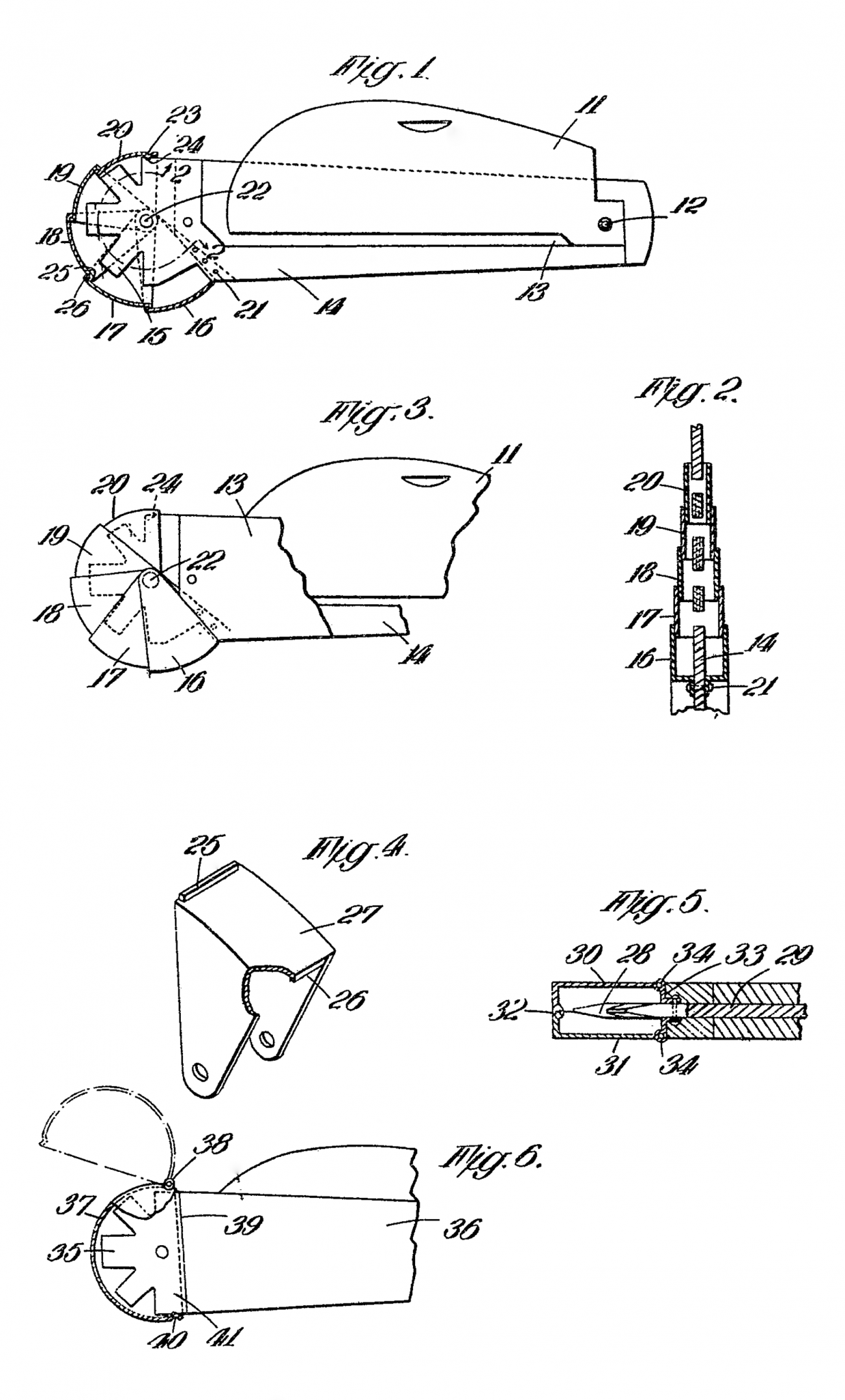 The drawings from Otto Altenbachs British patent 286,581, from March 1928, showing the extended blade spring
with several tools, and different types of cover for these tools when not in use.
Our sponsors
Advertisements
Dit is een geprinte versie van de publicatie op