Patents: ‘A one hand opening and closing pocket knife’

One of the most popular ways to open a folding knife is by means of a front flipper: a tab as part of the blade, allowing it to swing open with pressure from the thumb or index finger. The idea of the front flipper is often attributed to South African knife maker Fanie Le Grange, who is said to have invented the "lip opener" around 2005. But as is so often the case, there were ideas in this direction before that, such as the 1965 invention by Germans Günther Scheel and Hans Zissener, of Scheel & Zissener Solinger Stahlwaren.

Scheel and Zissener applied for a patent for their invention in January 1965, in Switzerland and the United Kingdom. The Swiss patent was granted on 30 June 1966, with number 416 376. The British patent 1,090,102 was published on November 8, 1967. There may be more, but these are the only two patents that have been found.
Although the British patent has the rather vague title “Improvements in Pocket Knives”, the Swiss patent describes the purpose of the invention more clearly: “Mit einer Hand zu öffnendes und zu schliessendes Taschenmesser” (a pocket knife which can be opened and closed with one hand)
The idea from Günther Scheel and Hans Zissener encompassed “a folding pocket knife of the kind having a lever mounted on the blade for displacing the blade from closed to open position or vice-versa with the use of only one hand.”
The British patent specification goes on as follows:
“One such folding knife has embodied projections and locking devices for adjusting the blade but, in this case, it is impossible to adjust the blade with only one hand.
Another such pocket knife has embodied a trigger mechanisms actuated by a locking lever, the moveable mechanism comprising levers, but the construction of this knife renders it difficult to manufacture and it is easily soiled. A further form of such pocket knife, has employed a lever for opening the blade, but no device is provided for securing the blade in the open position.
“An object of this invention is to avoid these disadvantages.
“According to this invention, a pocket knife of the kind referred to is provided in which the lever is arranged as an actuating member which can be pressed into a transverse groove in the base of the blade against the resistance of spring means, and in which at least a part of the lever associated with the groove has an approximately square or rectangular cross-section and carries a projection which, when the lever is depressed, is slidable in a semi-circular recess in an adjacent end piece of the knife and, when the lever is relieved of manual pressure, is in contact with an abutment in the end piece, whereby to lock the blade against pivoting movement. Preferably one of the end pieces has a rigid projection with a hemi-spherical knob-like end of the pivotable lever and which together with together with the end of the lever when the lever is swung out, serves as a guard for the hand.”
It is difficult to assess the impact of this invention. The Scheel & Zissener company is not mentioned in J. Anthony Carter’s German Knife and Sword Makers. The patent, however, can be considered to be a predecessor to the front flipper. 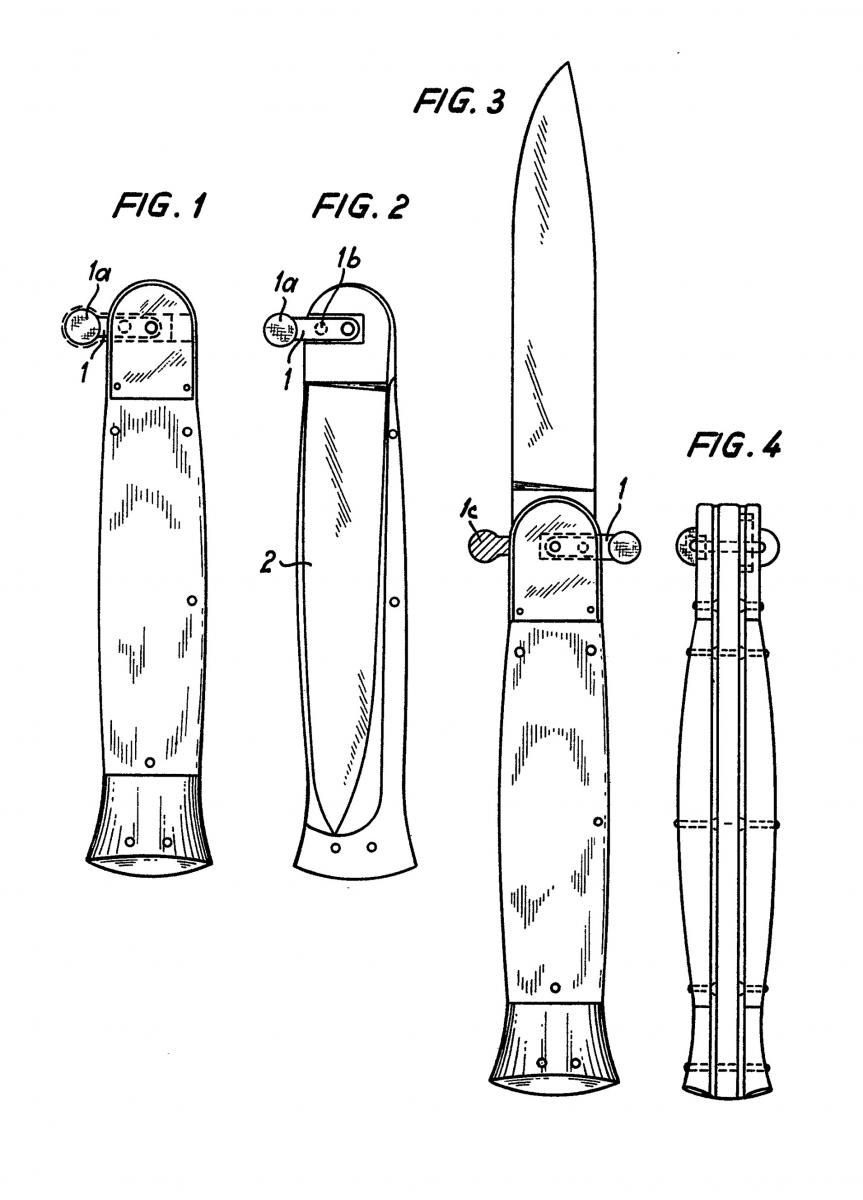