Patents: A knife with "a supply of twine"

Lady Gertrude Eleanor Molyneux must have been a remarkable character. She was born in 1868 into an aristocratic family of wood turners and became an established lady turner herself, becoming Honorary Freeman of the Turner’s Company in 1907. She was also interested in photography and the outdoors, and in 1898 patented a pocket knife with “a supply of twine, thread, silk, or other flexible material, suitable for binding and other purposes.”

The invention of her Ladyship, for which British patent No. 4169 was granted in December 1898, consisted of the following:
Between the two sided of the frame there was an open part with a transverse pivot, which carried a spool or reel. This had a central cylindrical body and two disc-shaped sides, which extended beyond the edges of the knife handle. The central cylindrical part had an attachment for the end of a piece of twine, thread, silk or other flexible material, which was to be wound up on the spool. To wind the flexible material, the sides of the spool could be serrated or milled to revolve the spool.
As the description continues: “In some cases there may be provided a spring, say a spiral spring, arranged so as to tend to cause the spool or reel to revolve in an opposite direction to which is revolvers when the flexible material is being unwound; also locking means or frictional devices to prevent the rotation of the spool when necessary may be provided. In lieu of or combined with the locking means above referred to, a self-acting catch or gripping device may be fitted, through which the flexible material when being unwound, passes.”
According to Lady Gertrude, her invention would be particularly applicable “to pocket instruments which are carried by persons in pursuit of sport, such as when fishing, shooting, hunting, etc. It is obvious that my invention may be applied to other instruments not strictly adapted to be carried in the pocket, as for example to pruning knives.”
Judging from the drawings, the invention seems perfectly practical and might even come in handy nowadays. We do not know of any examples of Lady Gertrude’s knife. 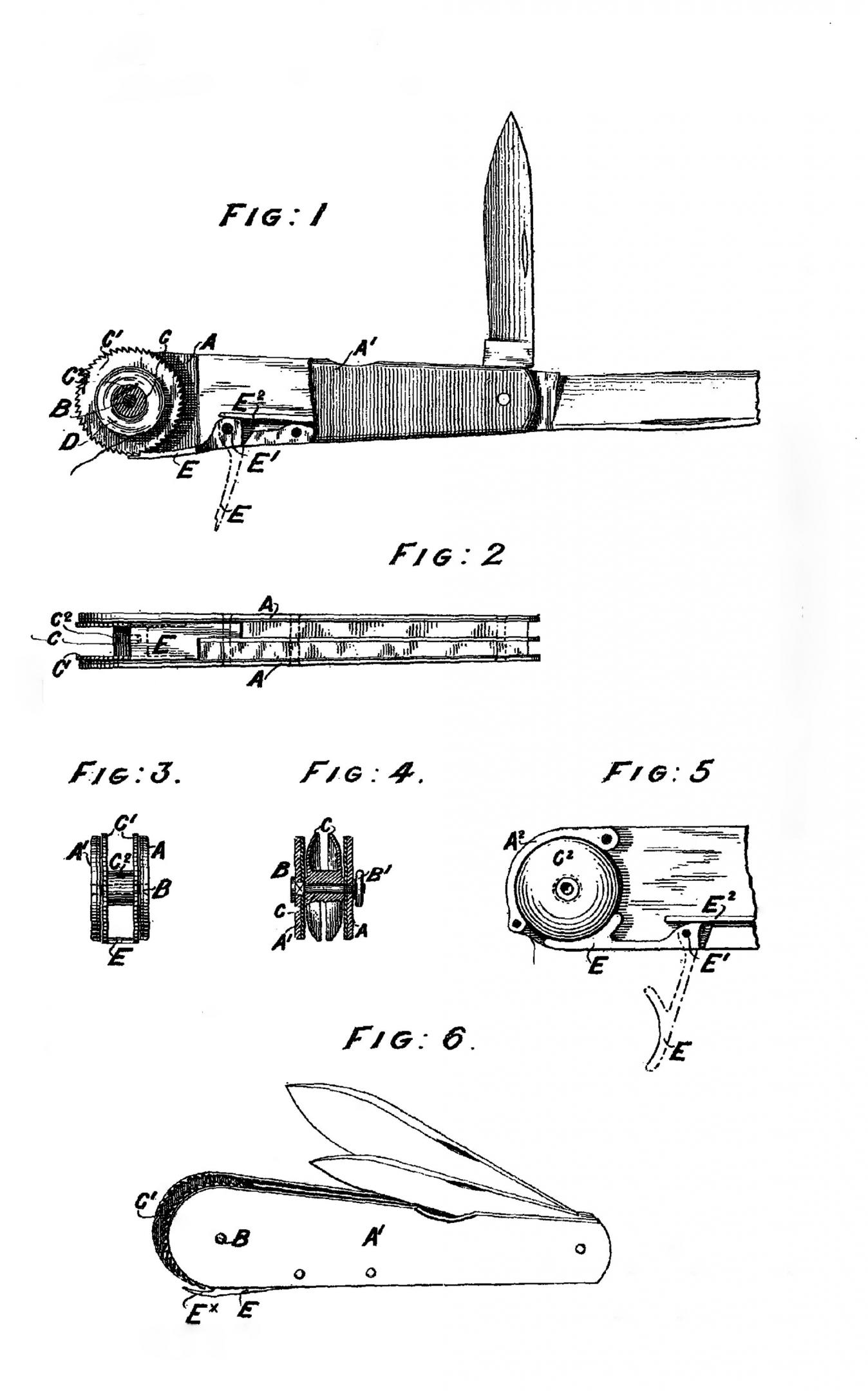 The drawings with British patent 4169 from 3 December 1898, showing Lady Eleanor's combination
of a pocket knife with a spool for twine or thread, in the rear of the handle.
Our sponsors
Advertisements
Dit is een geprinte versie van de publicatie op