Patents: A knife for sharpening pencils

There is an almost endless variety of knives, combined with some kind of tool – or tools combined with a knife. In 1895, Friedrich Determann from Elberfeld, Germany, patented a rather original combination of “a pocket knife with arrangement for sharpening pencils and the like”, in which the knife blade served as the cutter. Only a British patent has been found: No. 15,637 from 19 October 1895.

Determann described his inventions as follows:
“My invention has for its object a pocket knife with arrangement for sharpening pencils and the like. The cutter is formed by the blade, which in the closed state for the sharpening purpose is held fast and which may be adjusted corresponding to wear and tear.
By the arrangement used by me, a special sharpening apparatus is spared. Without opening the blade the pencil maybe easy and fine sharpened and the great advantage is gained that a taking of the blade for whetting it is unnecessary which however is the case with the cutters of the known pencil sharpening apparatus.”
To achieve his goal, Determann had provided his knife handle with a conical hole b into which entered the blade from the side. To sharpen a pencil, it had to be placed inside the hole. Between the blade and the wall of the hole was a free space, corresponding to the thickness of the chip to be cut off. To adjust the blade, and to hold it firmly during sharpening, the inner side of the blade had a projection d, running in an obtuse direction to the edge of the blade. The opposite side of the handle had a slot with a sliding piece f, that could be moved to and fro. The inner face of the piece was U-shaped, the U corresponding to the projection d. Thus, the U held the blade in place, and could be used to adjust the distance between the blade and the pencil. To open the blade, the sliding piece had to move out of contact with the projection. And finally, the conical hole had a slot g, for turning out the chips.
Figures 1 to 6 of the patent show the invention as described. Figure 7 shows a different method of fixing the blade. Instead of the projection, the blade has a groove, in which enters  the point of a sliding piece i.
The invention of Determann seems simple and quite practical, especially in an era when pencils were widely used. If someone should have an example, we would love to see a picture of it.

The drawing with British patent 15,637 from 19 October 1895, showing Friedrich Determann’s combination of a pocket knife and pencil sharpener. 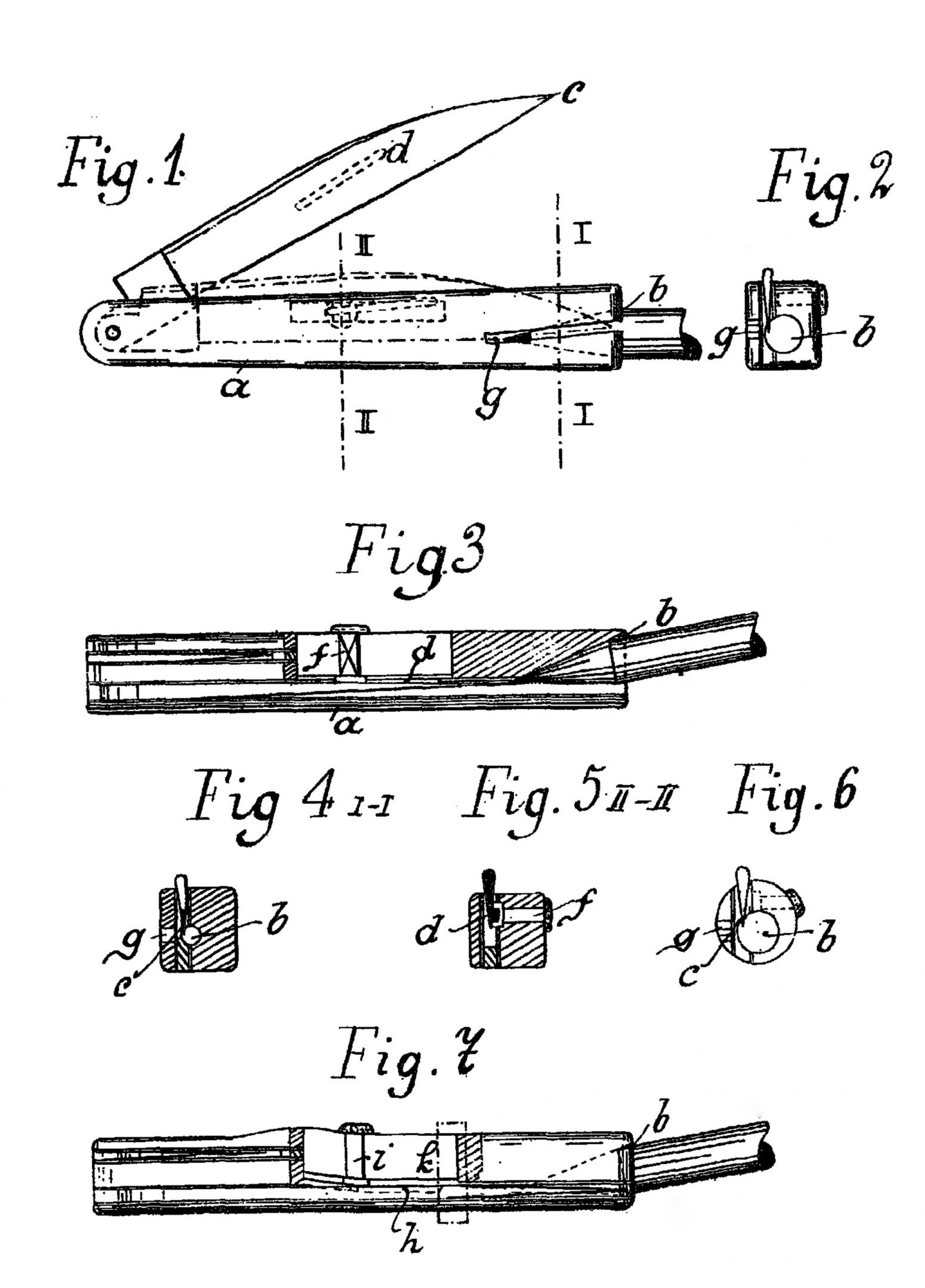