Patents: A “knife for one-handed”

Patents: A “knife for one-handed”

In 1915, the company of Wilhelm Schmolz & Co. in Solingen, Germany, applied for a patent on a “Messer für Einhändige mit Vorrichtung zum Festhalten der zu zerschneidenden Speisen” (Knife for one-handed, with a device to hold the food to be cut).

Looking at the remarkable object on the drawings, one will no doubt wonder about the use of this combination of a blade and two forks. The explanation is simple. Wilhelm Schmolz & Co. from Solingen had designed a knife with which people could cut and eat their food with one hand. The company patented the design in Germany in October 1915. That patent has not been not found, but there also exist an Austrian version (applied for in June 1915) and a Swiss version (applied for in March 1916). The Austrian and Swiss patents are almost identical, so we may assume that the German patent is not much different either.
The patent does not tell why Wilhelm Schmolz & Co. came up with this design. Considering the year (1915) it may have been due to the large number of wounded returning from the front, many of whom had to miss a hand or arm. In order to enable these people to eat independently, Schmolz had devised the one-handed knife. It consisted of two halves, one with a fork pointing downwards, the other with a combined knife and fork. Both halves were hinged together at the rear and were pushed apart by a leaf spring. A notch on one half fell into an elongated slot in the other, so that their mutual movement was limited.
Figure 2 shows the one-handed knife before cutting. With the fork pointing downwards the food could be held. When the two halves were squeezed together, the knife moved down and forward, making a cutting movement. Aa bite could then be taken with the second fork.
Whether the one-handed knife worked well in practice is difficult to say. It would probably have been a great help for people with one hand or arm. Coincidence or not: in 1916 the company Wilhelm Schmolz & Co. registered the trade mark “Good Samaritan”. 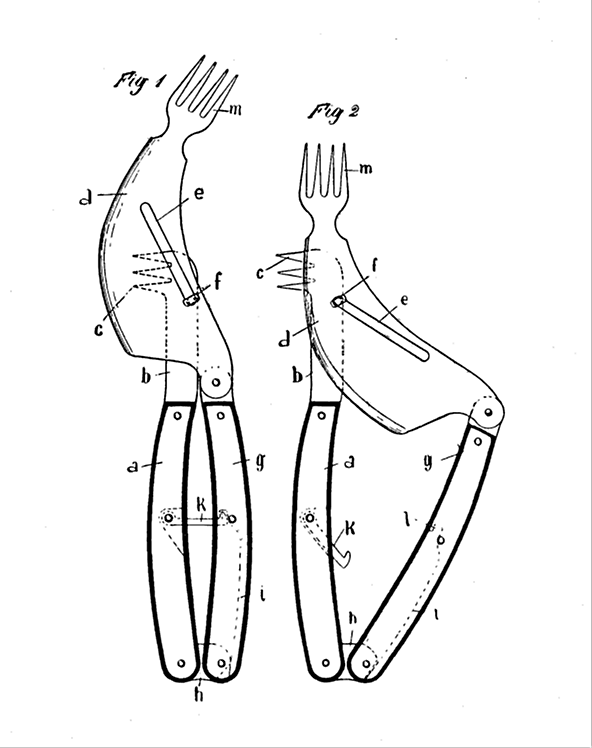 The drawings from Swiss patent 73400, showing the one-hand knife. Figure 1 shows the knife after cutting,
and figure 2 before cutting. Fork c helped to hold the food in place. When the two halves were squeezed
together, the blade d, guided by the notch f, cut the food.
Our sponsors
Advertisements
Dit is een geprinte versie van de publicatie op