In June 1913, Ernst Kolfhaus Sr. From  Hossenhaus 15, Solingen-Höhscheid, patented a pocket knife with a spring-loaded blade, locked and unlocked by a slide which was operated by a pull-ring. Interesting? Yes. Practical? Difficult to see.

Ernst Kolfhaus is not mentioned in ‘German Knife and Sword Makers’. We do not know who he was, accept for the few details mentioned in British patent 2878 from June 1913. Why a British patent? We do not know. No other patents have been found, so we have to do with this one source.
The text of the patent reads as follows:
“This invention relates to improvements in pocket-knives of the type in which the blade is automatically opened by action of a blade spring after operation of a spring-pressed slide, which arrests the blade in its closed as well as in its open position.
The novelty of the invention consists in that the slide can be disengaged against its spring-action, for opening or closing the blade, by means of an outer pull-ring.
The accompanying drawing shows the improved pocket knife.
Fig. 1 is a side view of the same, and
Figs. 2 and 3 are also side views thereof, with removed half of the handle, in its closed and open position respectively.
The case of the knife carries in a way known in the art an inner slide a, which carries an outward extension b fitted with a drawing-ring c. On the inner part of the extension b, a spiral spring d is arranged, which tends to press the slide always into its active position, that is into contact with the inner end of the knife blade. Upon pulling the slide outwards by means of the ring c against the action of the spring d, the slide liberates the inner end of the knife blade, so that the latter is projected into its open position by action of the blade spring e provided for this purpose. Upon release of the ring c, the spring d acts to return the slide again into its active position, whereby the knife blade is arrested in the open position. To close the knife, the ring c must again be pulled, whereby the end of the knife blade is liberated from the slide and can then be closed, in which position it is again arrested by the slide, which returns automatically into its active position after release of ring c.” 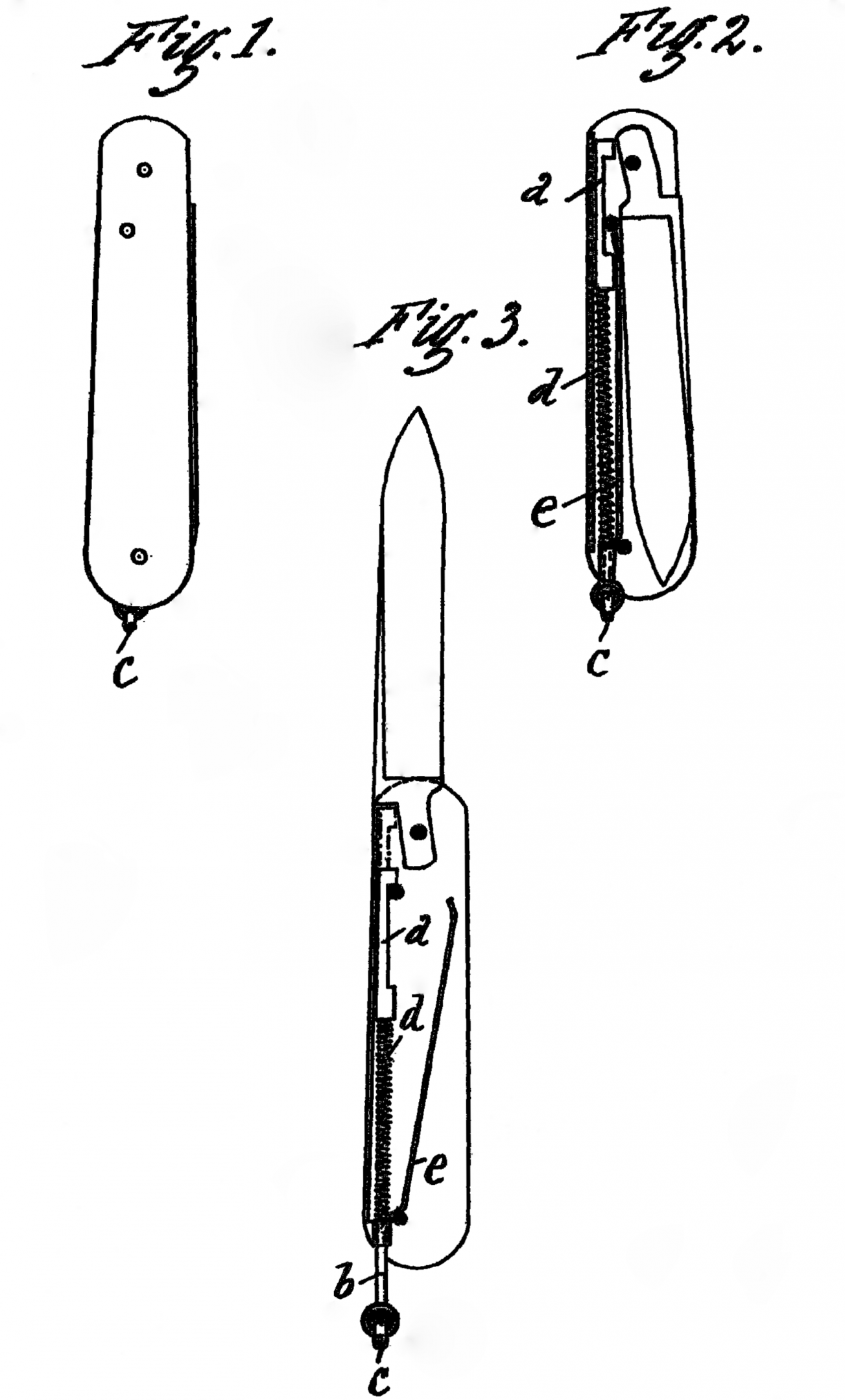 The drawings from British patent 2878, from June 1913. Unfortunately the quality is not very good.
The knife has an inner slide (a), with an outward extension (b), a ring (c) and a spiral spring (d).
The blade is projected through the blade spring (e).
Our sponsors
Advertisements
Dit is een geprinte versie van de publicatie op