In 1922, a Dutchman living in Germany patented a way to use razor blades, which had become too blunt for a decent shave, as a pocket knife by means of an ingenious frame construction. An environmentally-friendly solution before that phrase had even been coined.
Classic flat razors have one big disadvantage: they relatively quickly lose their sharpness for a good shave. From that moment on they could still be used for other carving work, but of course there has to be a suitable holder for them.
It may be because of the difficult economic situation at the time, but the 1920s see various patents for ways of reusing razor blades. Gerardus Jakobus Wamsteeker, for example, was granted a German patent in June 1922 for a pocket knife with razor blades no longer suitable for shaving”. Wamsteeker is a Dutch name, but according to the patent he lived at that time in Leipzig-Lindenau, about a hundred kilometres southeast of Berlin. Who Wamsteeker was and how he ended up there is unfortunately not known.
The construction of the pocket knife was simplicity itself. The razor (a) was placed in a frame (b), from which the cutting edges protruded on both sides. The frame had two hinged brackets. The wide bracket served as a berth for the frame. When unfolded, it served as a handle. The narrow bracket served as protection for the cutting edge as well as a means of locking the handle. For this purpose, a hook on the narrow bracket fell into a recess in the wide bracket.
The description in the patent is concise. As one can see from the drawing, Wamsteeker had various applications in mind. The round opening in the wide bracket could have served as a cigar cutter. The triangular recess made it possible, for example, to cut a piece of string without unfolding the handle. 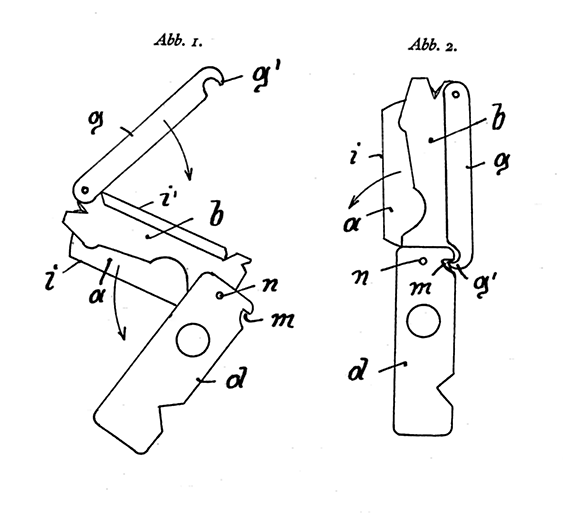 The drawings from German patent 367 820, granted on 3 June 1922 to Gerardus Jakobus Wamsteeker.
The razor (a) lies in a frame (b) and is protected by a wide bracket (d) that also serves as a handle, and
a narrow bracket (g) that locks the handle.
Our sponsors
Advertisements
Dit is een geprinte versie van de publicatie op