Patents: ‘A Portable Combined Fork and many Bladed Knife for Table Use’

Patents: ‘A Portable Combined Fork and many Bladed Knife for Table Use’

Knife manufacturers regularly come up with culinary multitools: a knife, fork and maybe a spoon, combined in a handy package. These are in fact continuations of the centuries-old travel cutlery sets, but smaller, lighter and less luxurious. Numerous inventors have been involved in this, such as Giovanni Garda from Turin, around 1900.

We do not know much about Giovanni Garda, except that 1902 and 1903 must have been exciting years for him. Giovanni was an electrician, lived at Via Beccaria number 9 in Turin, Italy, and had what he must have considered a brilliant idea: a knife with several blades which enabled, for example, to easily cut a piece of meat into thin slices. He then made those blades foldable into a U-shaped handle, added a fork, and voilà: here was his “Portable Combined Fork and many Bladed Knife for Table Use”.
Giovanni had high expectations, that much is clear. In 1902 and 1903 he applied for patents on his invention in Austria, Great Britain, France and the United States - and probably also in Italy, but that patent has not been found. The summary of British patent 6284, applied for on 14 March 1902 and granted on 15 January 1903, reads as follows:
“This invention relates to a fork and a knife having as many blades as there are spaces between the prongs of the fork, so constructed and arranged that they can be folded together into a compact portable form, and when they are opened out they can be used for cutting meat or other food into narrow slices, the fork being held in the one hand keeping the food in position while the knife handle is held in the other hand and its blades are drawn through the meat between the prongs of the fork. The blades are pivoted at one end of the handle so that they can be folded in like the blades of a pocket knife, or can be opened out, being held in either position by suitable catches. The fork is jointed in the middle so that the one part which has the prongs can be folded over the other part which forms the handle, and in this folded condition the fork is attached to the knife handle its prongs being inserted into a recess at the one end of the handle, whilst its middle joint is held by a catch to the other end of the handle. In this condition the knife and fork can be conveniently be carried in the pocket. The knife blades are capable of being taken of their pivot so that they can be separately cleaned or sharpened.”
The idea was quite original, but we do not know if Giovanni’s invention went into production – multi-bladed knives have never been very successful. Maybe one of our readers knows more? 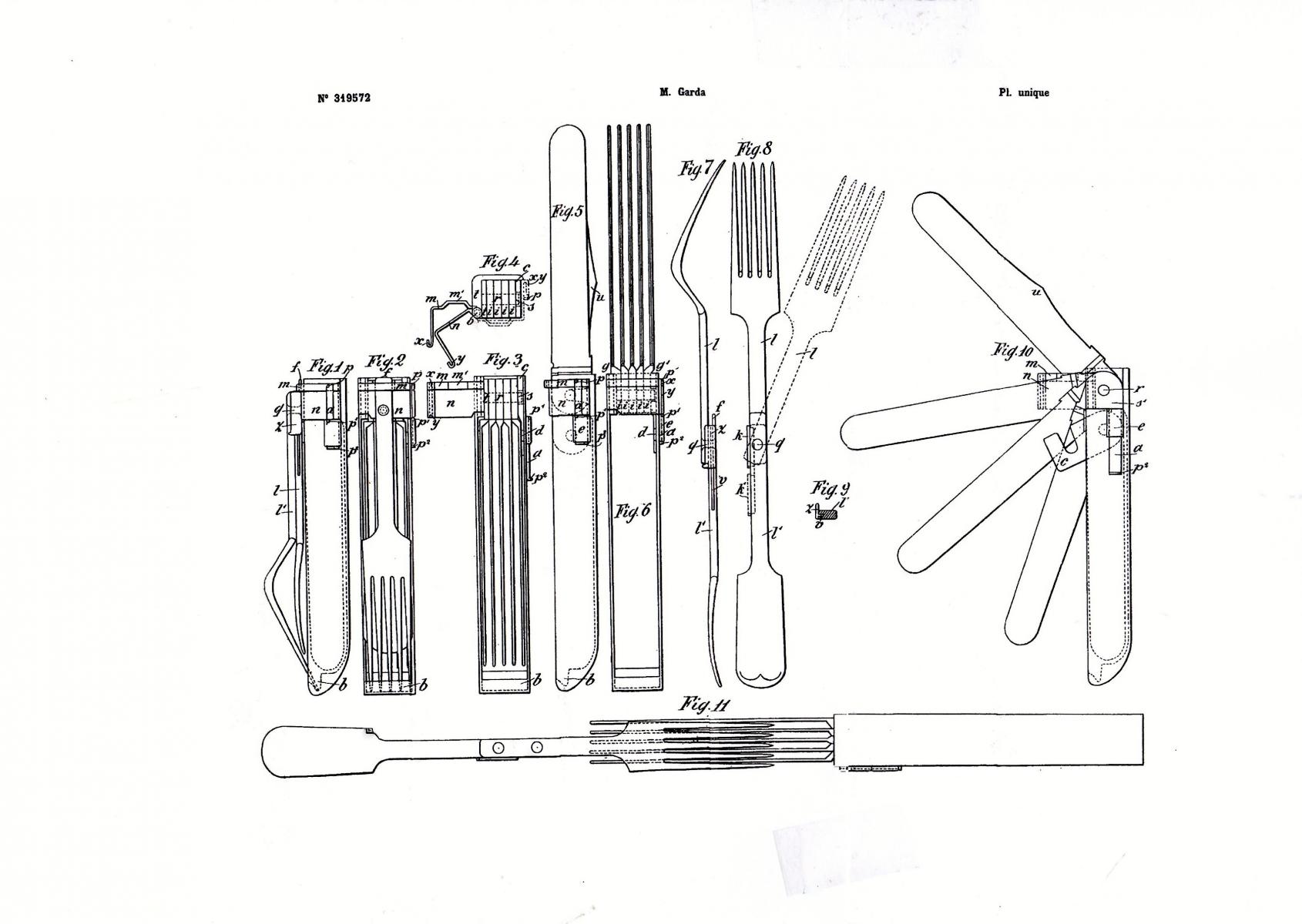 Giovanni Garda applied for patents in several countries. These are the drawings from his French
patent 319572 granted on March 13, 1902, showing the multi-bladed knife and the foldable fork.
The French patent application was for a “couteau-fourchete-polilame-masticatoire”, which
translates rather awkwardly as a “Knife-fork-multiblade-masticator”.