Where do knife makers get their ideas? What inspires their designs? Our series on custom knives tries to explain one specific knife. In this issue: The Bull Shark M by Dutch knife maker Toni Oostendorp.

The Bull Shark is a knife model that Toni Oostendorp introduced 13 years ago. It is a solid outdoor knife with a spear point blade. The Bull Shark M is the medium version, with a blade length of 13.5 cm.
The example pictured here is a special edition. It is the first one with a Damascus blade, hand-forged by Toni from O1 and 75Ni8 steel. The high contrasts in the blade are due to the quantity of O1. This knife is one of a series of five that Toni crafted in support of the fight against child cancer. All five were sold through Facebook, and the proceedings went to a Dutch organisation called Kika.

A special edition of Toni Oostendorp’s Bull Shark. It is the first one he made
with a hand-forged Damascus blade. This knife is one of a series of five which
Toni made to support the fight against child cancer.
The Bull Shark is a combination of full-tang and a tapered tang. In the first section of the handle the knife has a full tang. This is where it takes the full force of any prying movement. The tang then tapers to the rear for better balance and weight dispersion. The resulting space in the top and bottom part of the handle is filled with rubber strips, which align with the G10 scales and offers more grip when the handle is wet.
The G10 scales are fixed to the knives in three different ways. They are glued, screwed and riveted. This may seem a tad exaggerated, but Toni Oostendorp wanted to make sure they don’t get loose – and in 13 years they never have.
The blade itself has a deep finger choil, positioned in such a way that when the index finger rests in that front choil, and the middle finger in the choil behind the guard, the thumb naturally lies on the spine of the blade. Its position is such, that the triangular bridge over the lanyard hole does not touch the soft tissue on the inside of the thumb.
Toni’s knives always have the lanyard hole in front of the handle. He finds that more and more knife makers are imitating this feature, sometimes without realising the reason why. It has to do with practice, as all features in Toni’s knives show. When the lanyard is fastened at the front of the handle, and the knife slips from the hand, it can do little damage. The movement of the blade is limited by the short distance between the lanyard hole and the wrist. When the lanyard hole is positioned at the rear of the handle, that is quite different. The blade can swing freely and do serious damage. 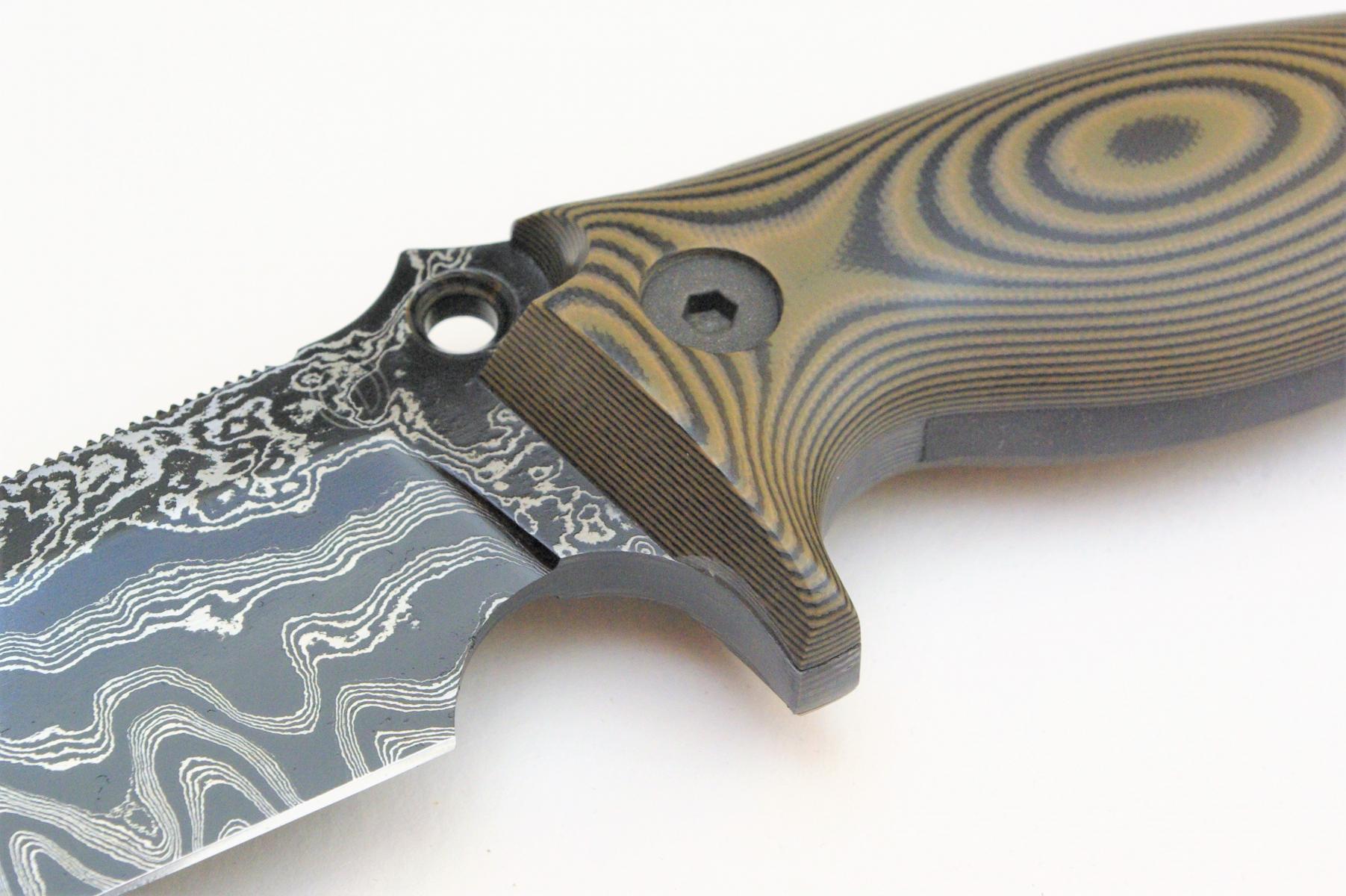 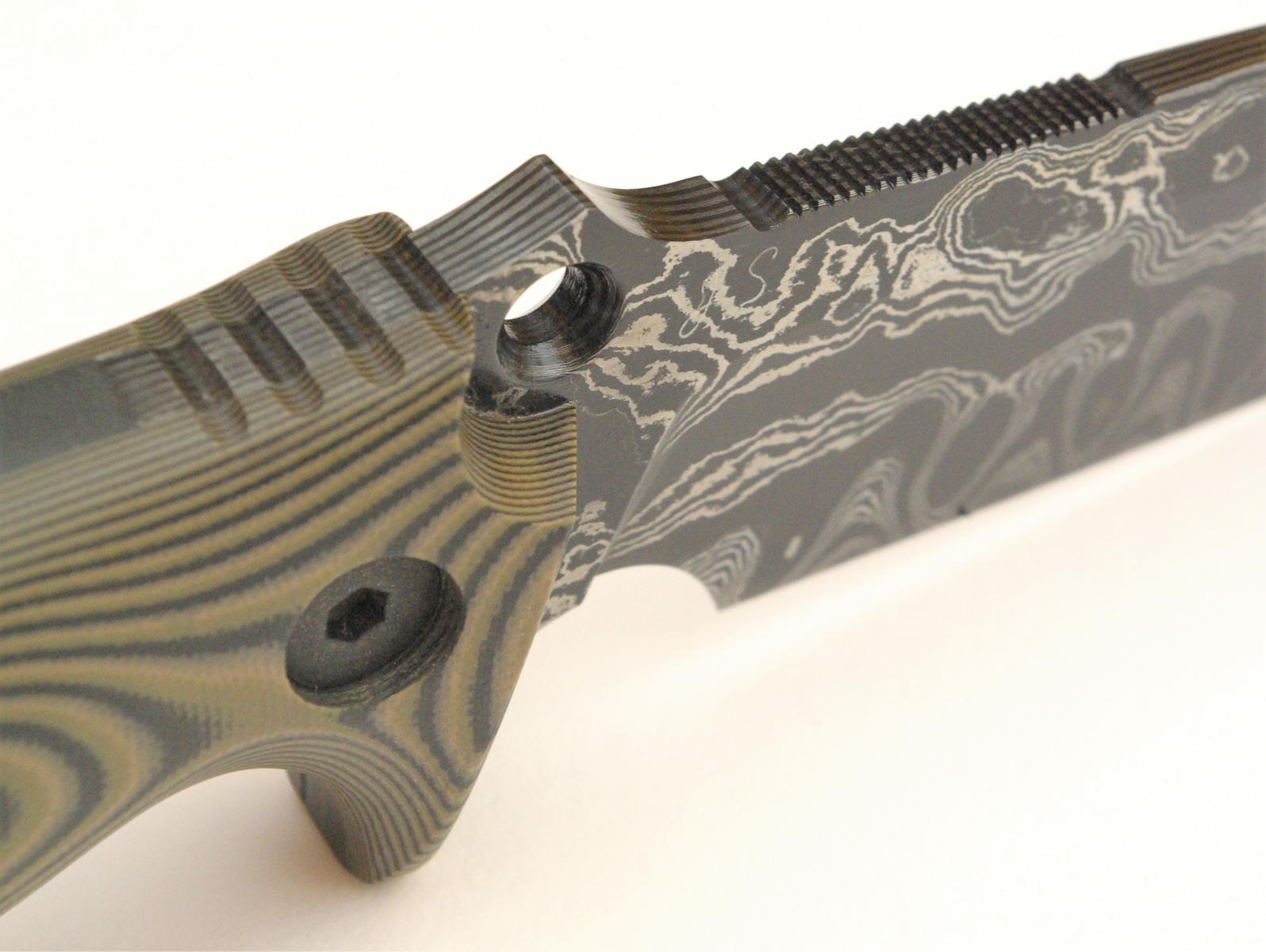 Left: Close-up of the finger choil and the lanyard hole in the blade. Center: Both the spine of the blade and
the handle have jimping. Right: The butt is riveted to the tang and thus helps to secure the grips.
Recently, Toni developed an advanced sheath for his Bull Shark knives. Kydex sheaths are normally made by wrapping them around the blade. This gives a very tight fit, but may result in scratches. Snow and ice in the sheath may even block the knife. Toni designed a sheath in which the knife is held only at the tip and at the handle. There is free space around the entire length of the blade. This is achieved by wrapping the Kydex around a G10 mould and vacuum pressing it into shape. The outside of the sheath is subsequently wrapped in camo cordura, fastened by a powerful double-sided sticky tape. And as for the refinements: the upper lips of the sheath, which hold the knife handle, are connected with a screw and with a rubber spacer. Tightening the screw closes the lips, which means a tighter fit of the knife, and vice versa.

Close-up of the sheath. The knife is held only at the tip and at the handle. There is free space around the
entire length of the blade.
Our sponsors
Advertisements
Dit is een geprinte versie van de publicatie op