My knife: the ‘Br@bançon’ by Belgian knife designer Laurent Cordier

My knife: the ‘Br@bançon’ by Belgian knife designer Laurent Cordier

Where do knife makers get their ideas? What inspires their designs? Our series on custom knives tries to shine light on one specific knife. In this issue: the ‘Br@bançon’ by Belgian knife designer Laurent Cordier. 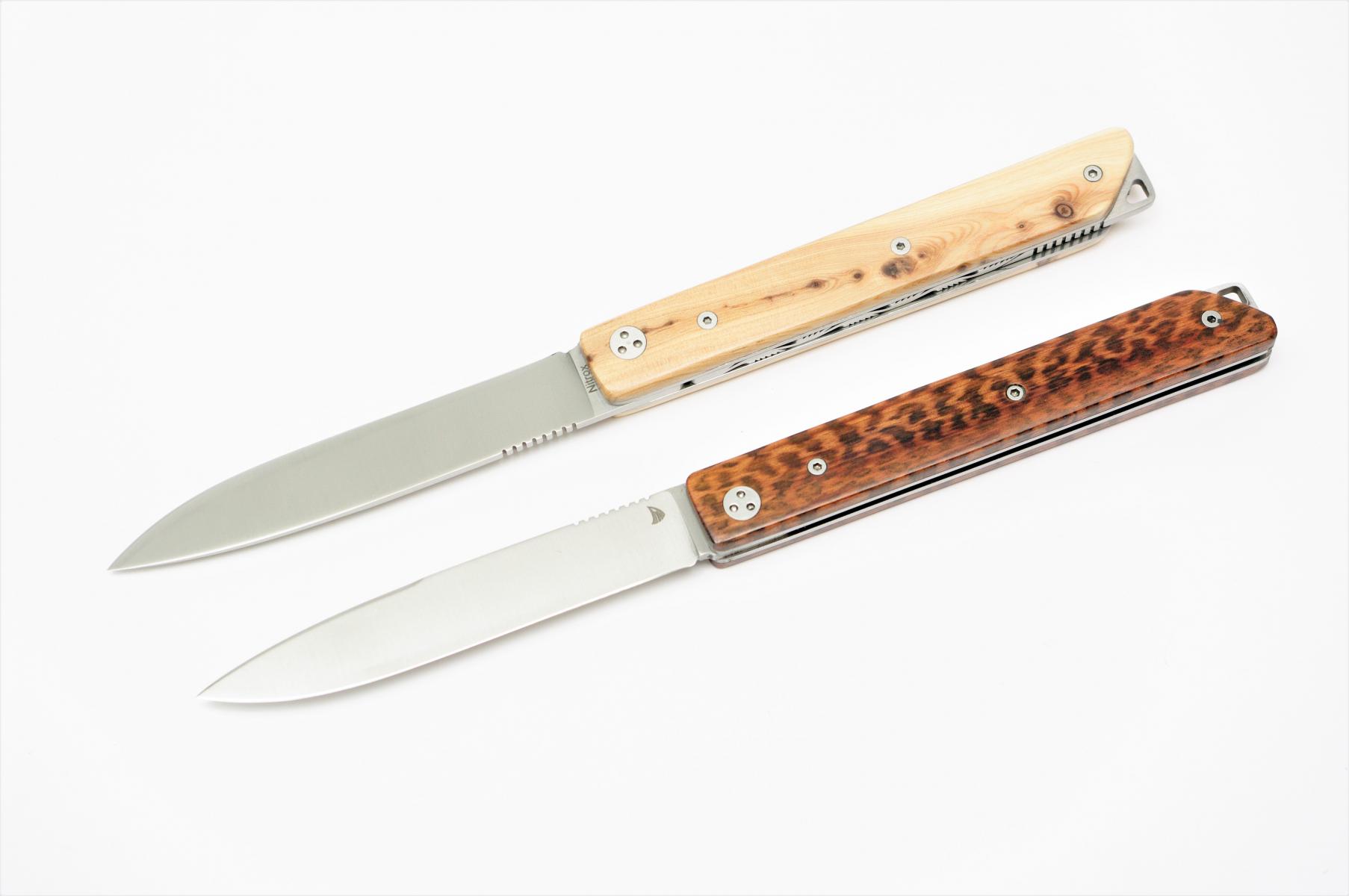 The ‘Br@bançon’ is an elegant folding knife with a 12 cm blade. It weighs about 70 gram, depending on
the type of steel and handle material.
Laurent Cordier’s first knife design, which he presented in 2018, was simply called ‘Le Couteau Belge’ (The Belgian Knife). His desire was to make a design which could become a popular Belgian knife model.
The choice for a knife had several reasons. Cordier himself has a passion for the so-called ‘art de table’. A knife is an essential part of that table art. Furthermore, his wife is from the French province of Auvergne, home of the French knife capital Thiers.
Laurent Cordier’s  second design is the ‘Br@bançon’ (Brabant) which is also the name of the Belgian national anthem. The knife’s mechanism stems from an 18th Century example. “The idea was born with French knife maker Robert Beillonet”, explains Laurent Cordier. “He gave me a beautiful present, the reproduction of an 18th Century book on knife making. Part of the book deals with secret mechanisms. I have modified one of these and adapted it to modern technology”. 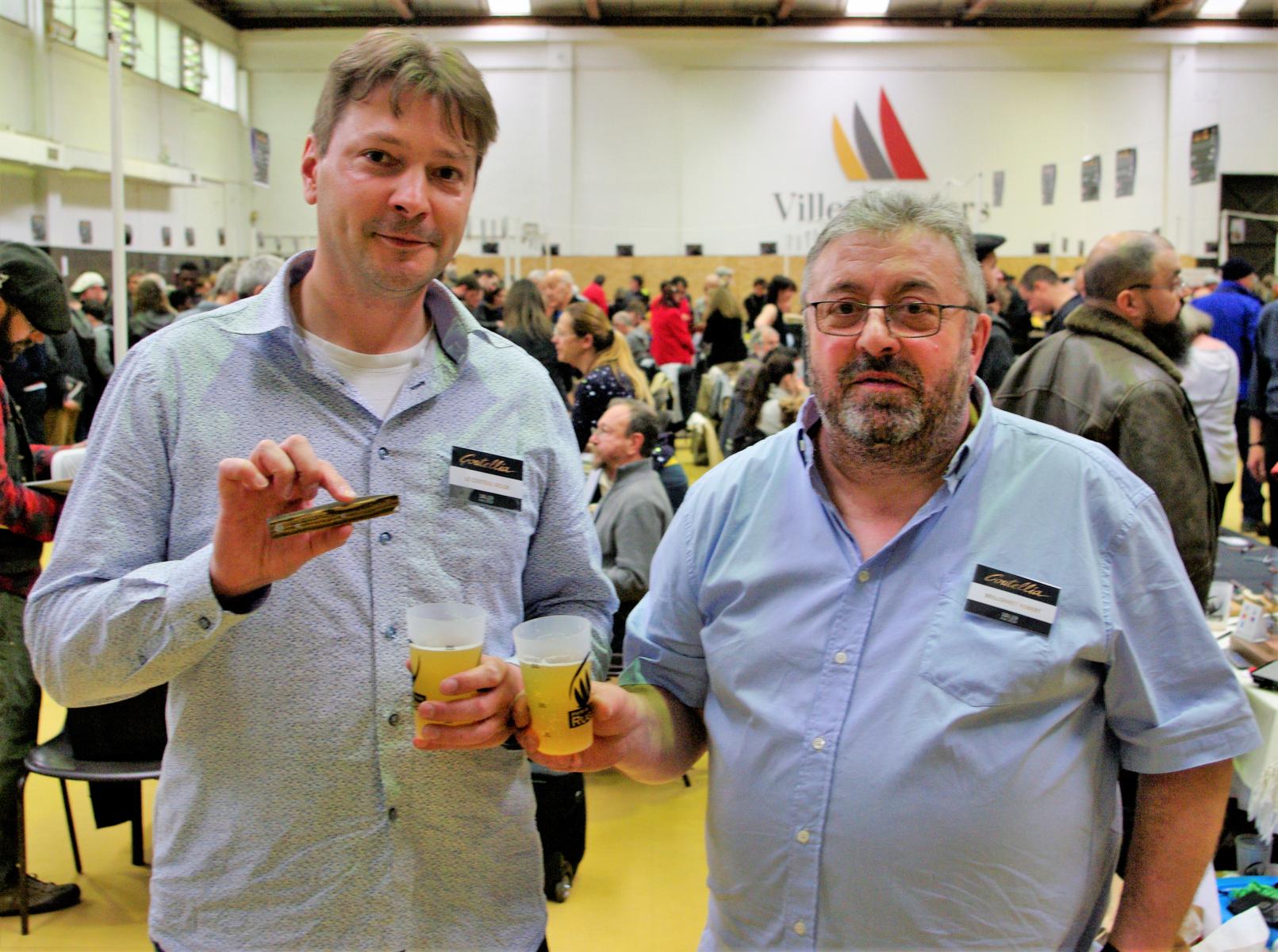 Laurent Cordier (left) and Robert Beillonet, who gave him the idea for the ‘Br@bançon’.
As with Le Couteau Belge, Cordier developed the concept on his home PC, made the drawings and had a prototype made. This needed some small adjustments but by the third prototype everything worked as planned and in the meantime, the design has been patented. Looking for a name, Cordier came up with the ‘Br@bançon’. It refers to the Belgian national anthem, and is a word which is understood in both French and Flemish. 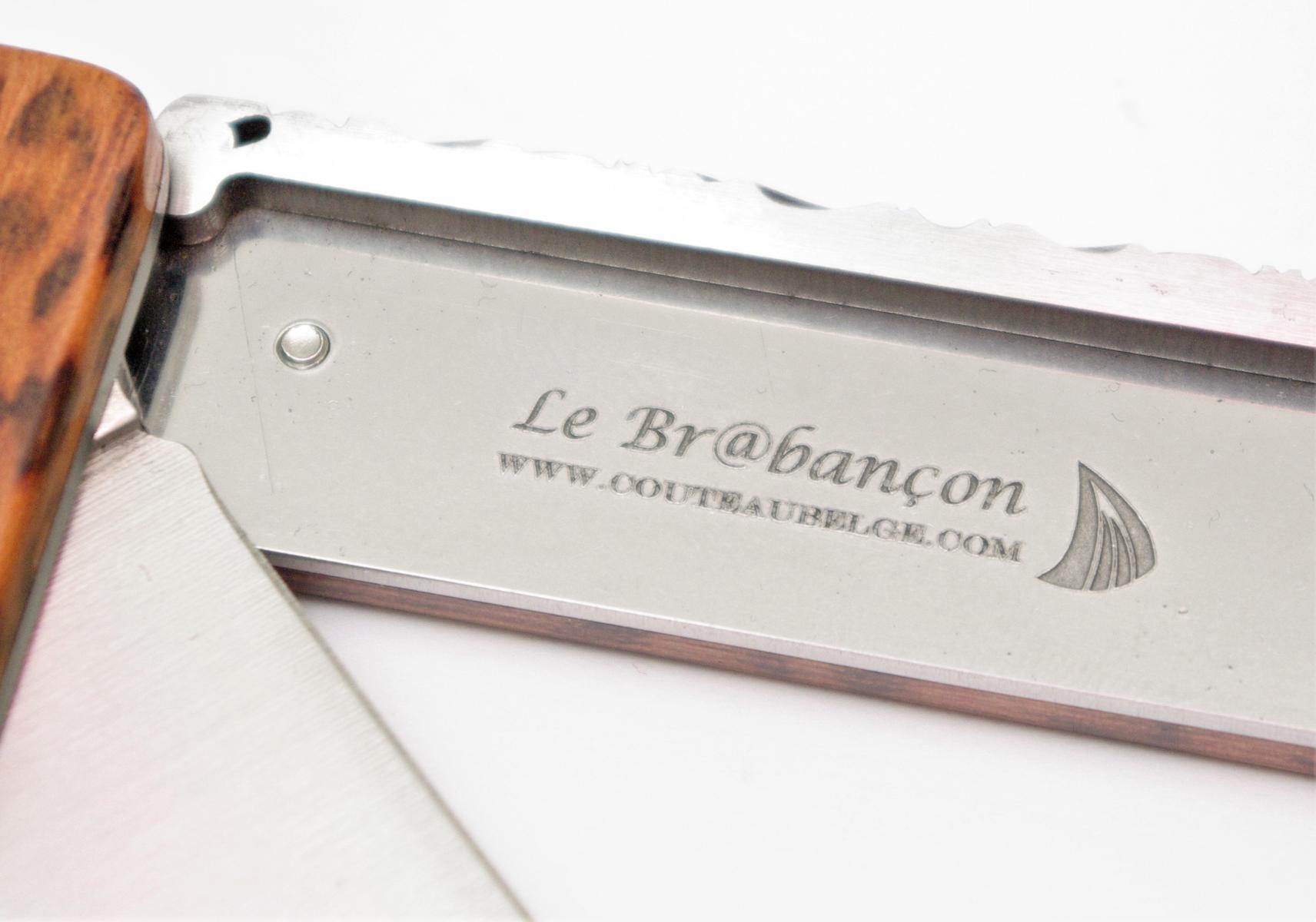 The marking on the inside of the handle.
Laurent Cordier is a knife designer. His knives are made in France, in Auvergne, in limited series. Like ‘Le Couteau Belge’, the ‘Br@bançon’ is produced from different materials. There are versions with blades from Damask, RWL34, Nitrox or Alenox, and there are different types of wood as handle materials. At this year’s Coutellia in Thiers, Laurent Cordier presented a special version of the ‘Br@bançon’ with handles made from Cherrywood from the famous Puy de Dôme volcano in Auvergne. This special version comes with a certificate, specifying the three, and when it was cut. The wood has been dried for 30 years.
From the pictures, you may guess some of the secrets of the ‘Br@bançon’ mechanism. However, if you really want to know how it works, you will have to try for yourself. 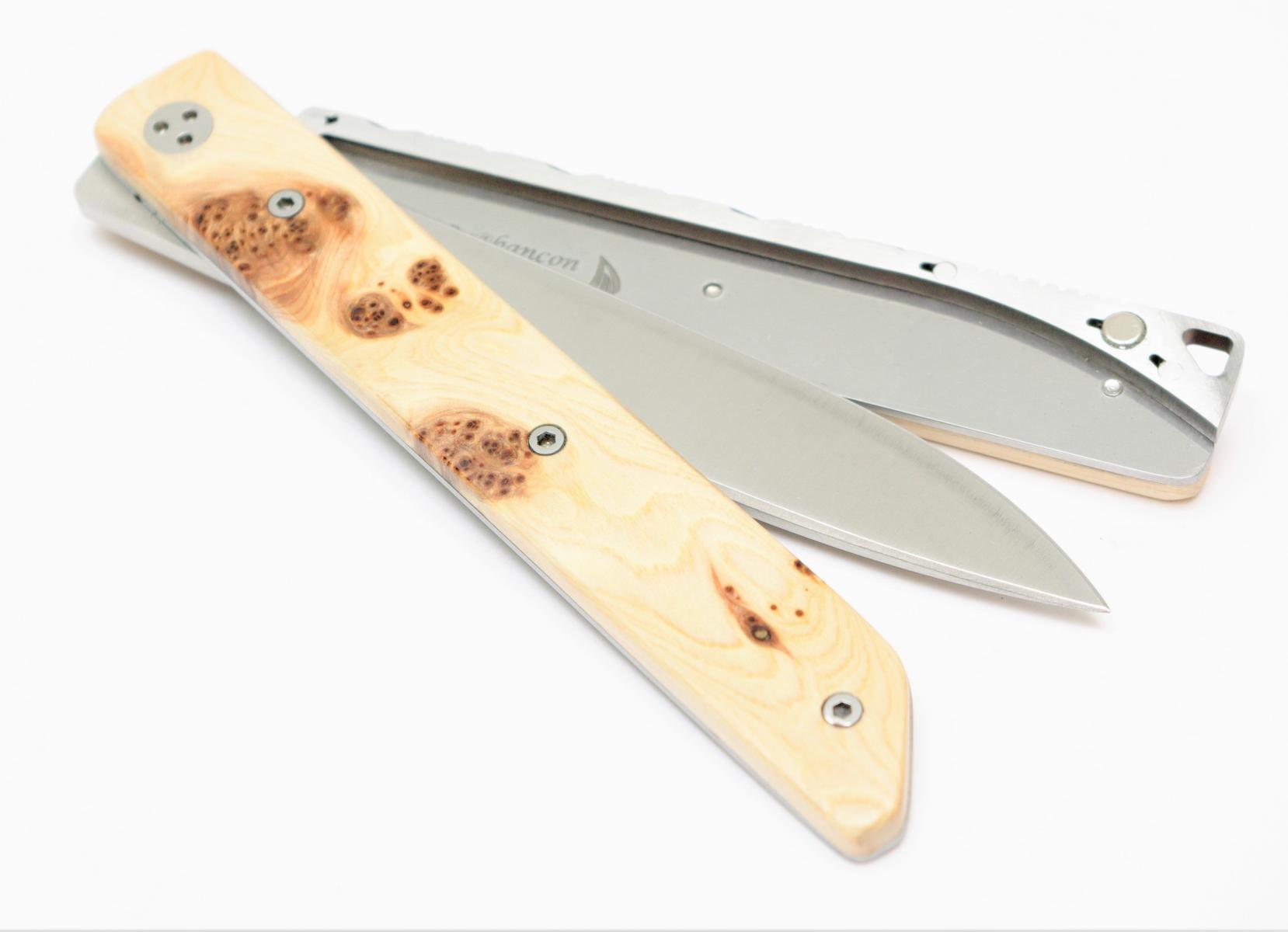 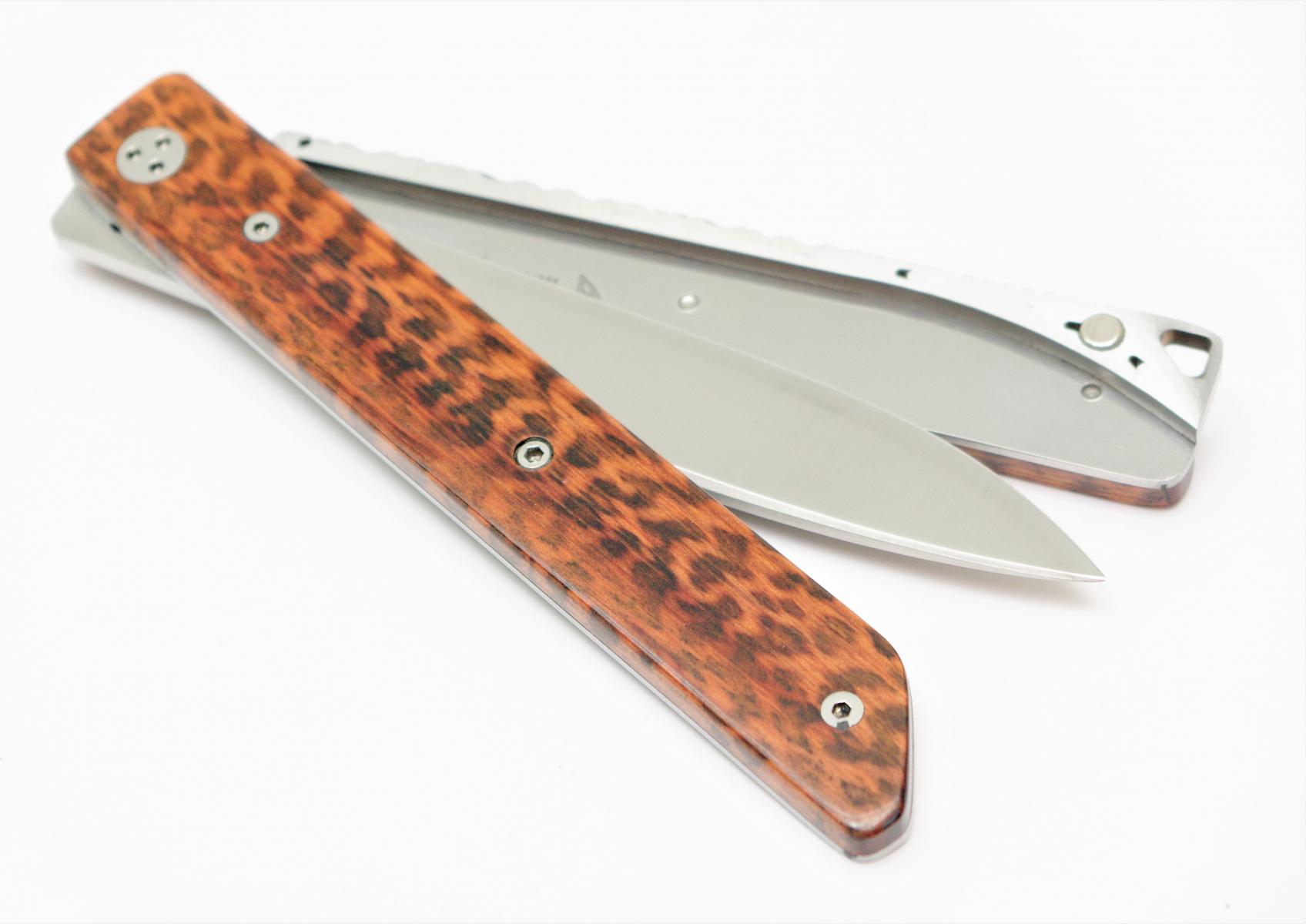 These two examples of the ‘Br@bançon’, with different handle materials, lift a tip of the veil of the secret
opening mechanism. 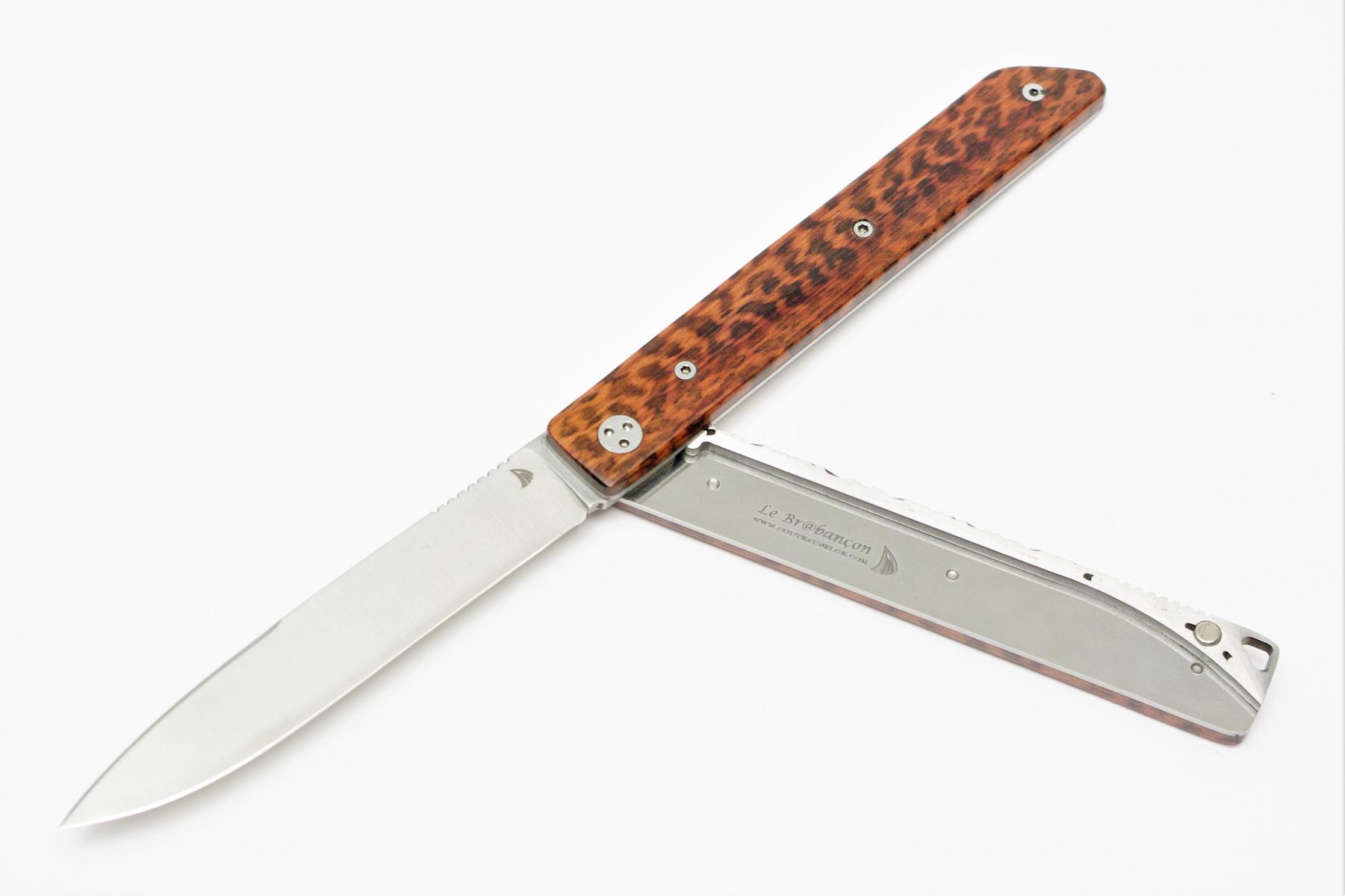 The ‘Br@bançon’ will be made in limited quantity, before Laurent Cordier moves on to another model.