The German Messer Macher Messe (Knife Makers Show) in Solingen is the Spring gathering of the German Knife Makers’ Guild. This year was its 18th event and compared to previous years, there were some changes.

A blade museum may seem like an ideal location for a knife show, but there are some drawbacks. The available space, for instance. The spring show of the Deutsche Messer Macher Gilde (German Knife Makers’ Guild), traditionally held in the Blade Museum in Solingen, was coming apart at the seams. Crowded, cramped, and with an ever-expanding number of side-events in the museum garden, the event felt uncomfortable at times.
This year, the show was different because the Guild wanted to return to its roots. It was one day instead of two, with less tables, and a number of side-events were dropped. Another novelty was a prize instated by the Blade Museum (a certificate and 2,000 Euros) to the knife maker who had crafted the best knife within a predetermined theme. This year’s theme was ‘small, exquisite, fixed’. The prize was won by Reinhard Tschager from Bolzano in the autonomous Italian province, South Tyrol.
The level of artistry and craftsmanship in Solingen was high as ever, as demonstrated by the pictured specimens. Next year’s date has not been set yet, but it will probably be the first Sunday in May. By that time, you can have a look at www.messer-macher-messe.de or just keep an eye on our European Blades website. 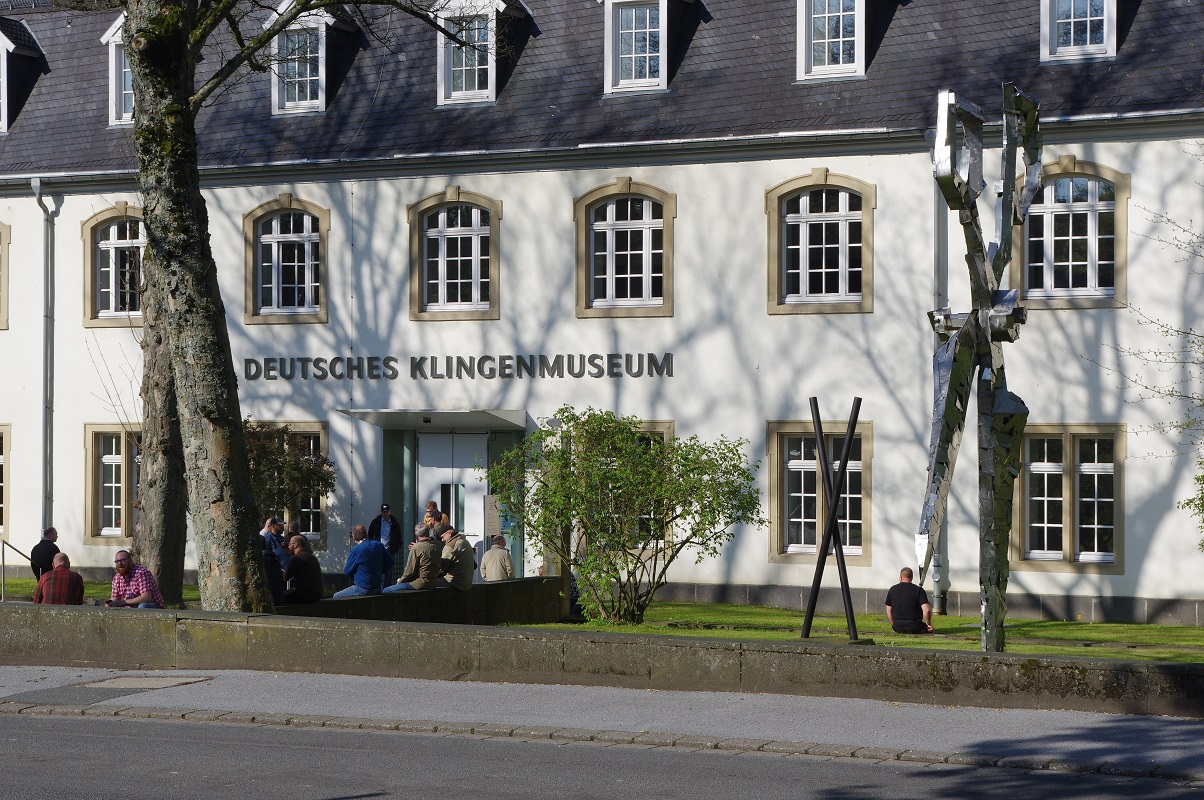 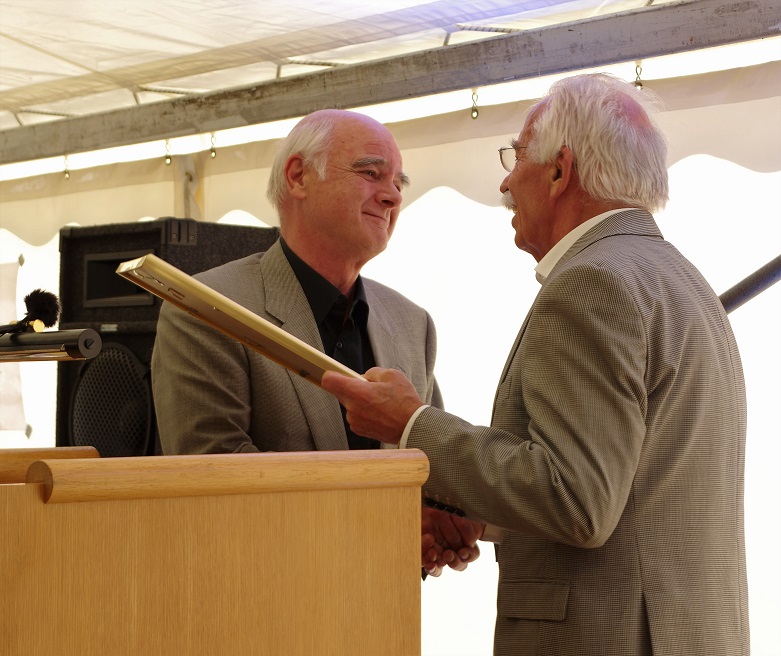 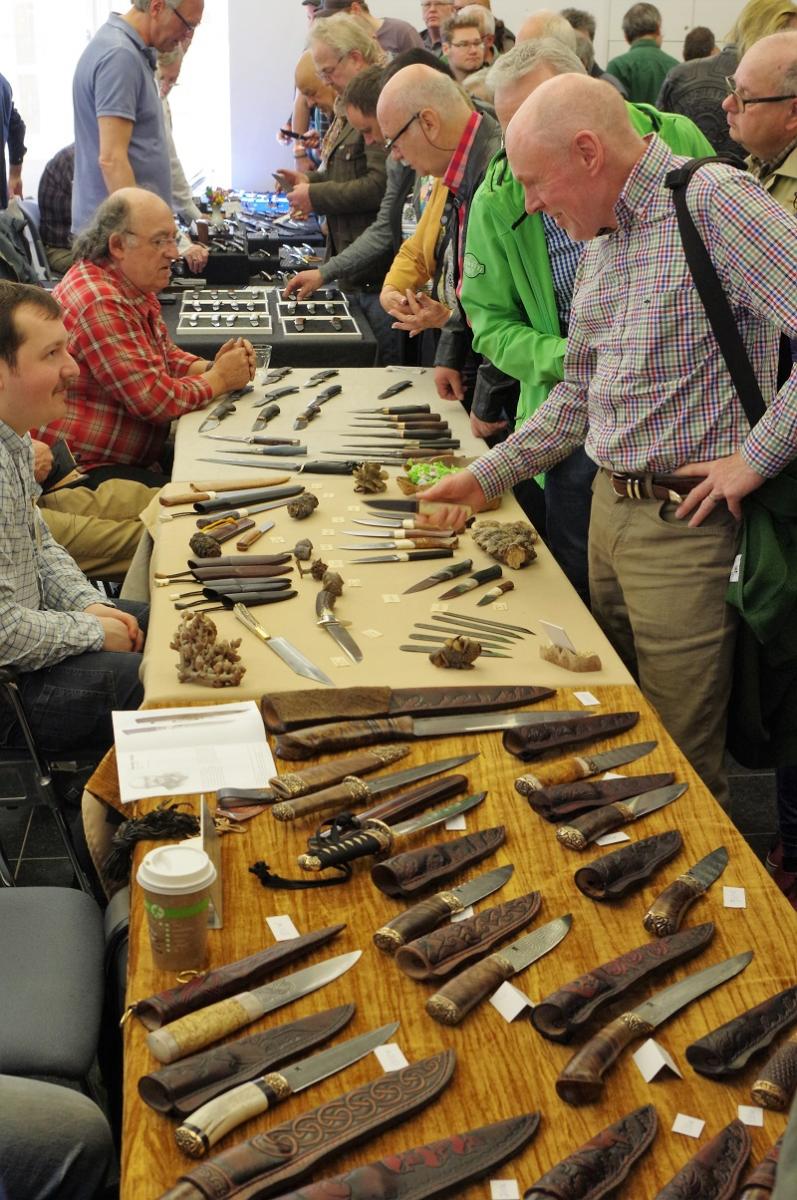 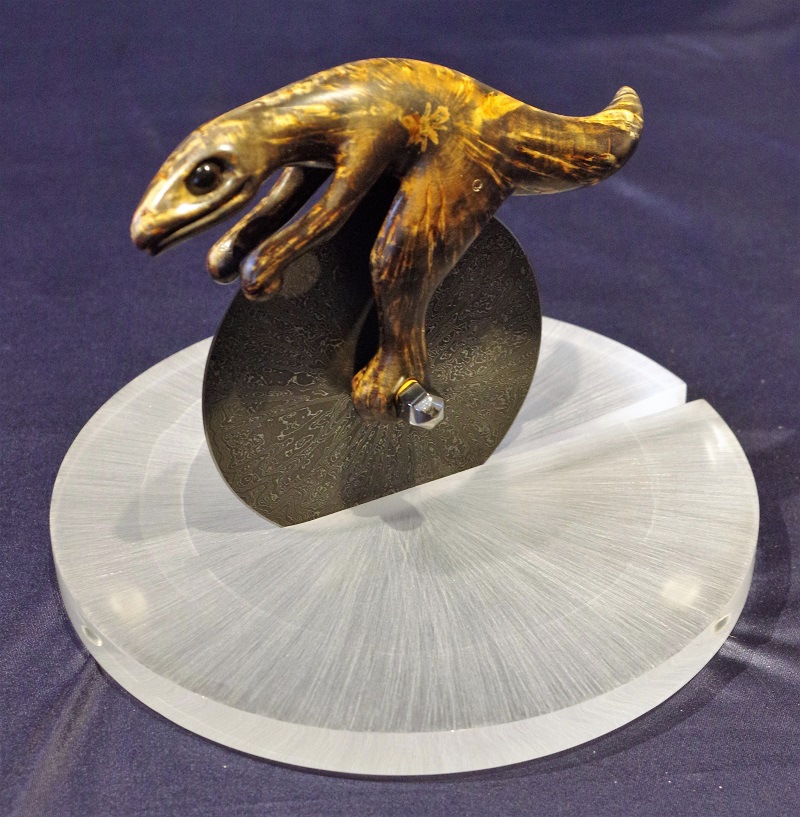 Left: With less participants, the show’s floor was less crowded than usual.
Right:There are few knives that spontaneously make you smile. This is one: the ‘Velorazor’ by the German maker
Ralf Hoffmann. The circular blade, with a diameter of 12 cm, is made of 1.2842 and 15N20 Damascus. The dinosaur,
a velociraptor, is made of curly birch with amber eyes.

Swiss knife maker André Perret calls this series ‘Traum’ (Dream). It consists of five knives, which represent
the stages of the Swiss Army Knife development between 1891 and 2008. The blades are all made of
Damasteel, the handle material is mammoth. 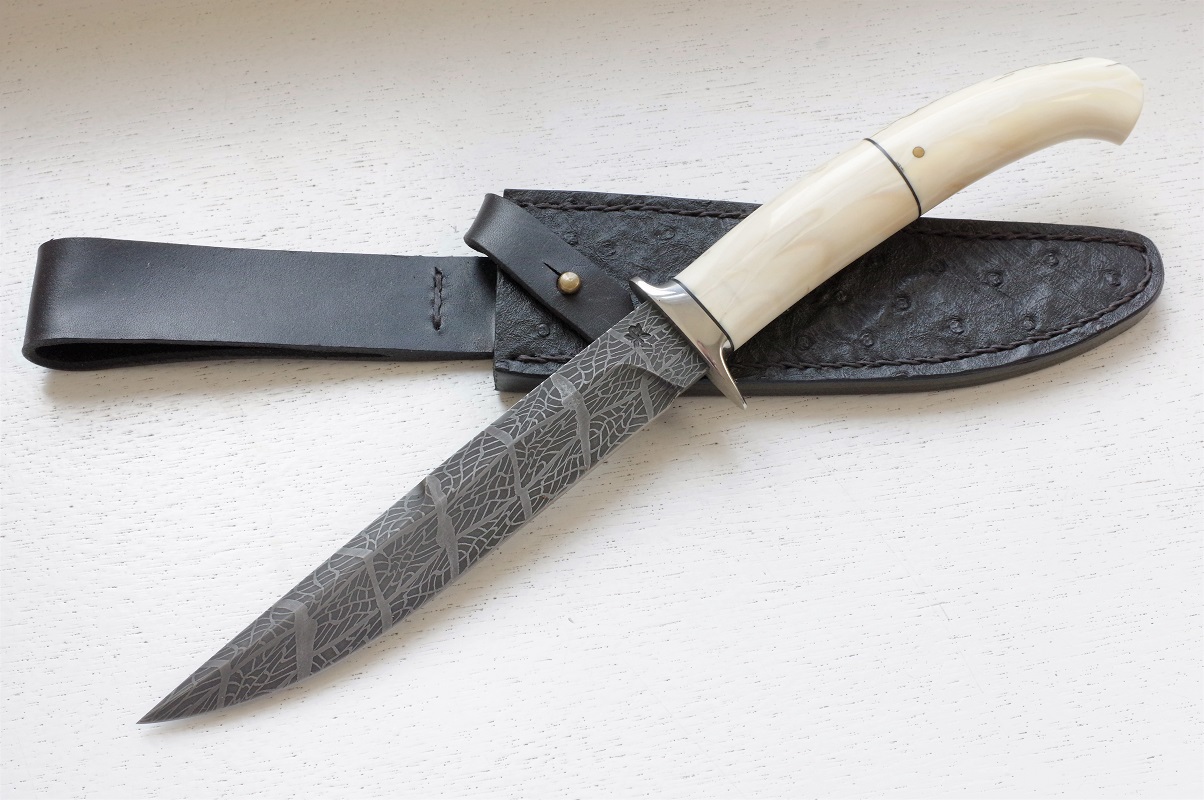 The ‘Oriental Spyder’ by Josef Fazekas. The 16.5cm blade is from ‘Spyder’ mosaic damask, the handle material is warthog. The knife is 31 centimetres long. 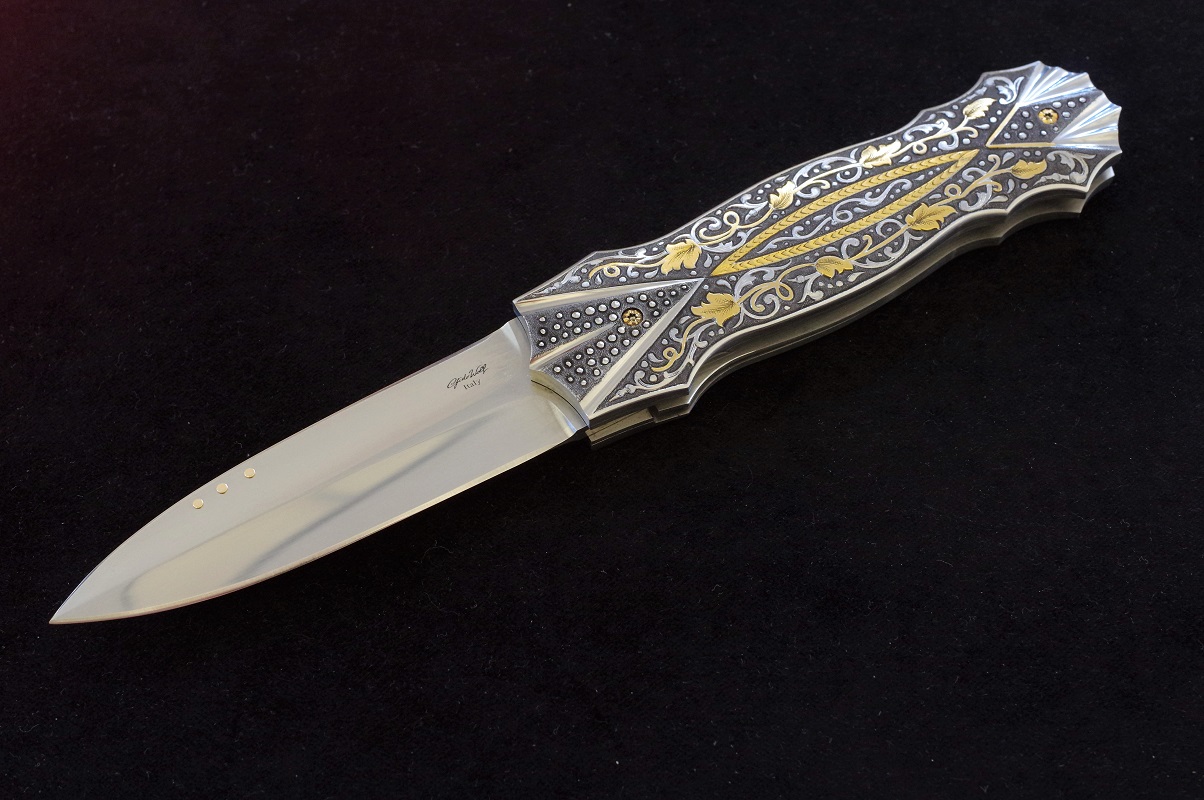 The Italian knife maker Paolo Gidoni made this wonderful liner lock dagger. The blade is RWL 34, the
handle is made from AISI 415 stainless. The engraving was done by Bertella Luca. Unfolded, the knife
measures 215 mm. 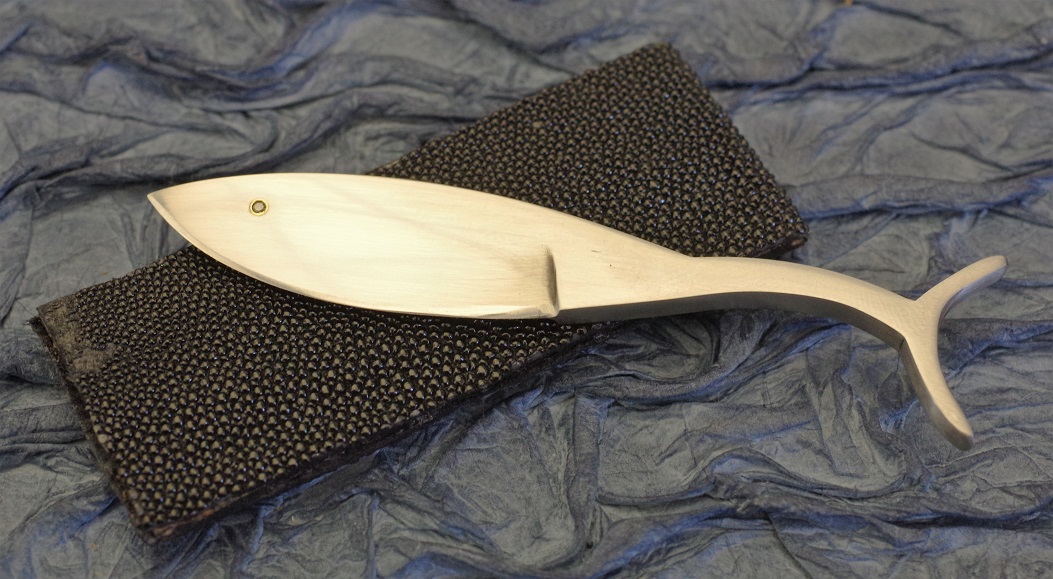 Left: A Celtic Knife by Michael Eifler, made from a single piece of D2.
Right:Austrian knife maker Christoph Daim designed and made the Evo Mini Fish. The knife is made from
RWL 34 with two ‘eyes’ of gold and brilliants.

Alfred Dobner made this knife from mosaic damask forged by J. Rühl. The bolsters are hand engraved.
The handle is made of ivory. 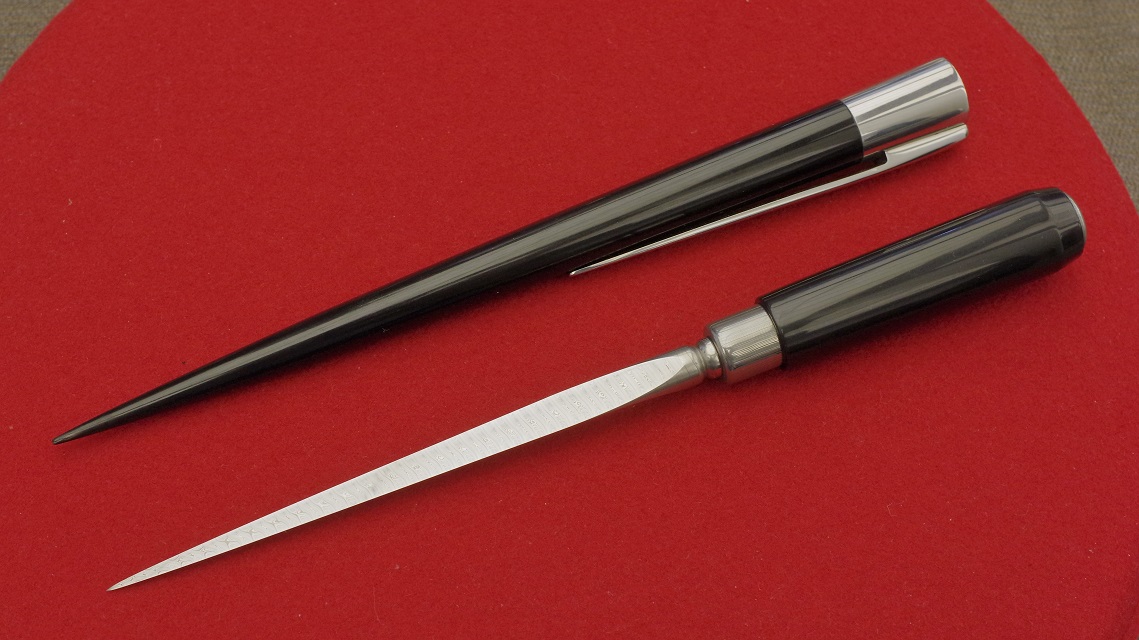 Wolfherd Sollorz called this pen-knife ‘El Diablo’. De knife is made of torsion Damasteel and the handle
and the sheath from Oryx-Horn. The total length of the knife is 251 mm.

Italian knife maker Carlo Alberto Trevesi made this ‘Wild Cat 17’. The blade is made from AISI 440C, de handle is mammoth fossil ivory. The length of the knife is 219 mm.

The ‘Blu (without e) Samurai 2’ by Italian knife maker Daniel Cattaneo. The linerlock folding knife has a
Damascus blade and an MA5M interframe handle. The engraving was done by Fabio Bregoli. 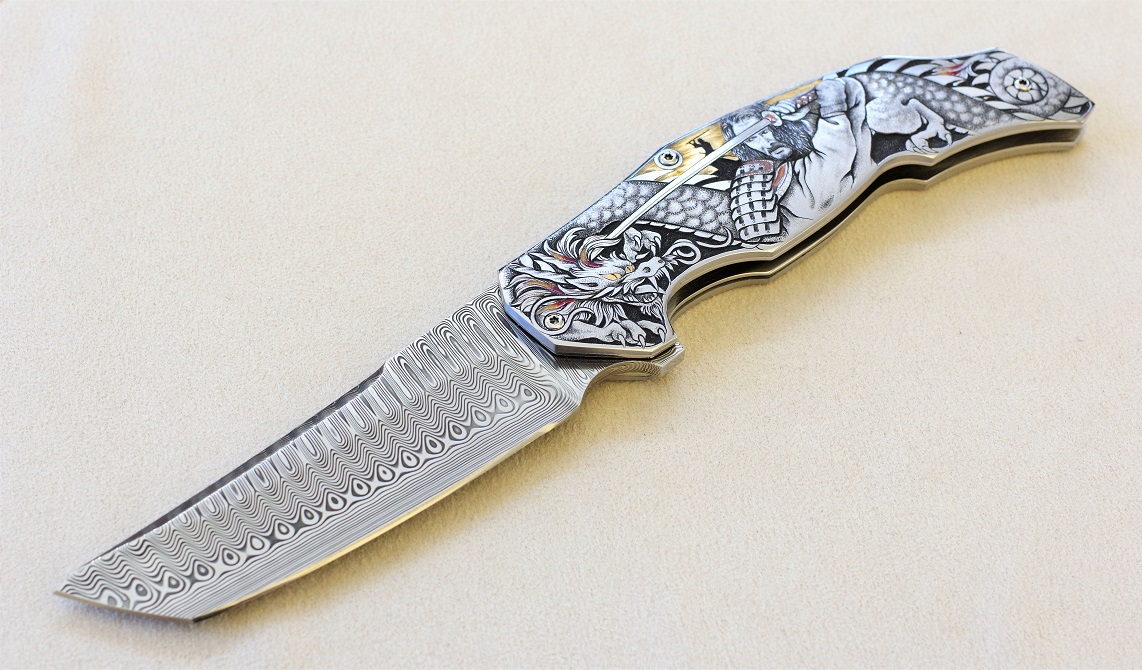 Sergio Consoli from Italy made this Model 391 Samurai. The blade is from Damasteel Inox, the handle
from Inox with engraving by Elena Bosio. The 94 mm blade opens through a flipper and uses Consoli’s
proprietary system of ball bearings. 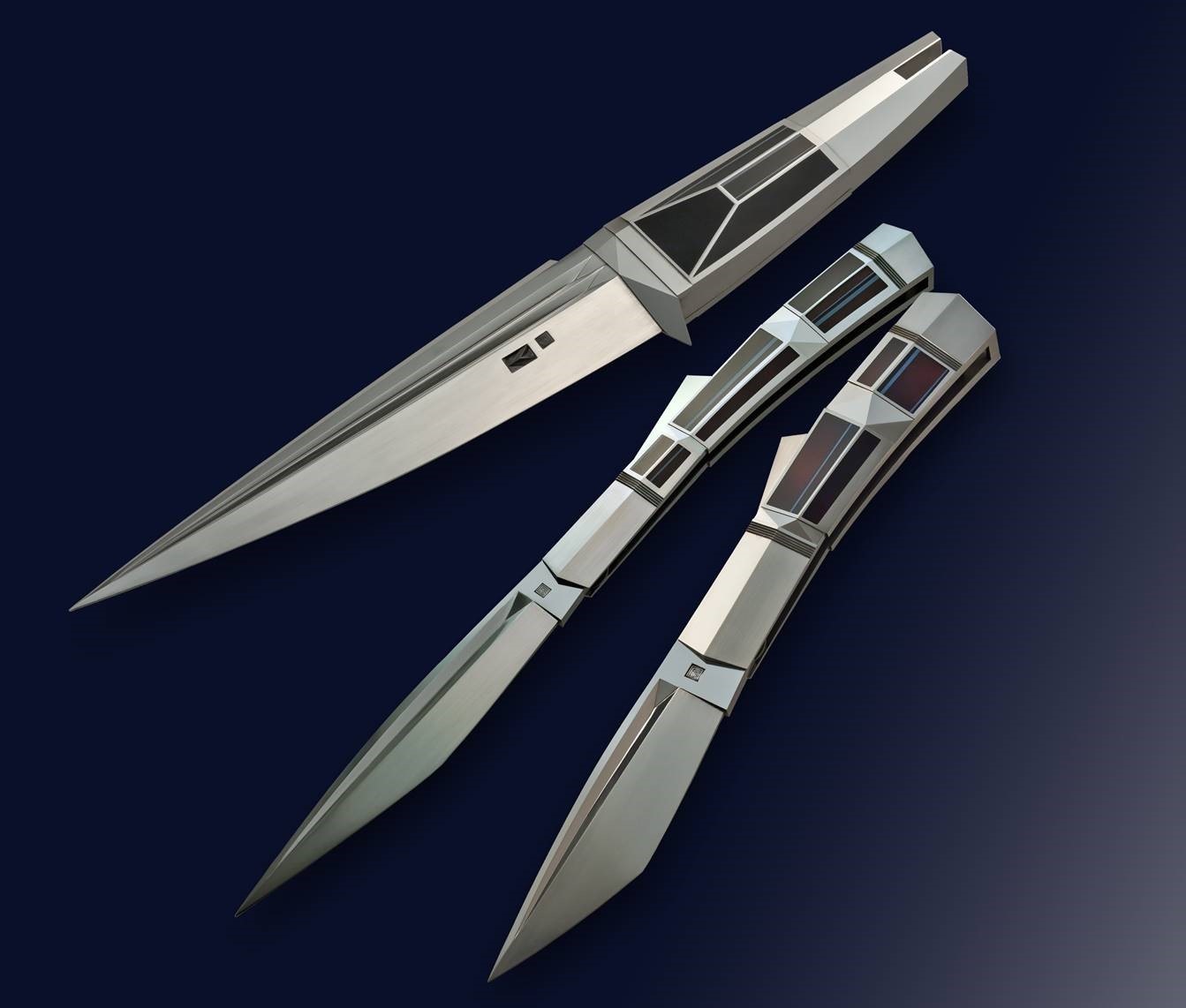 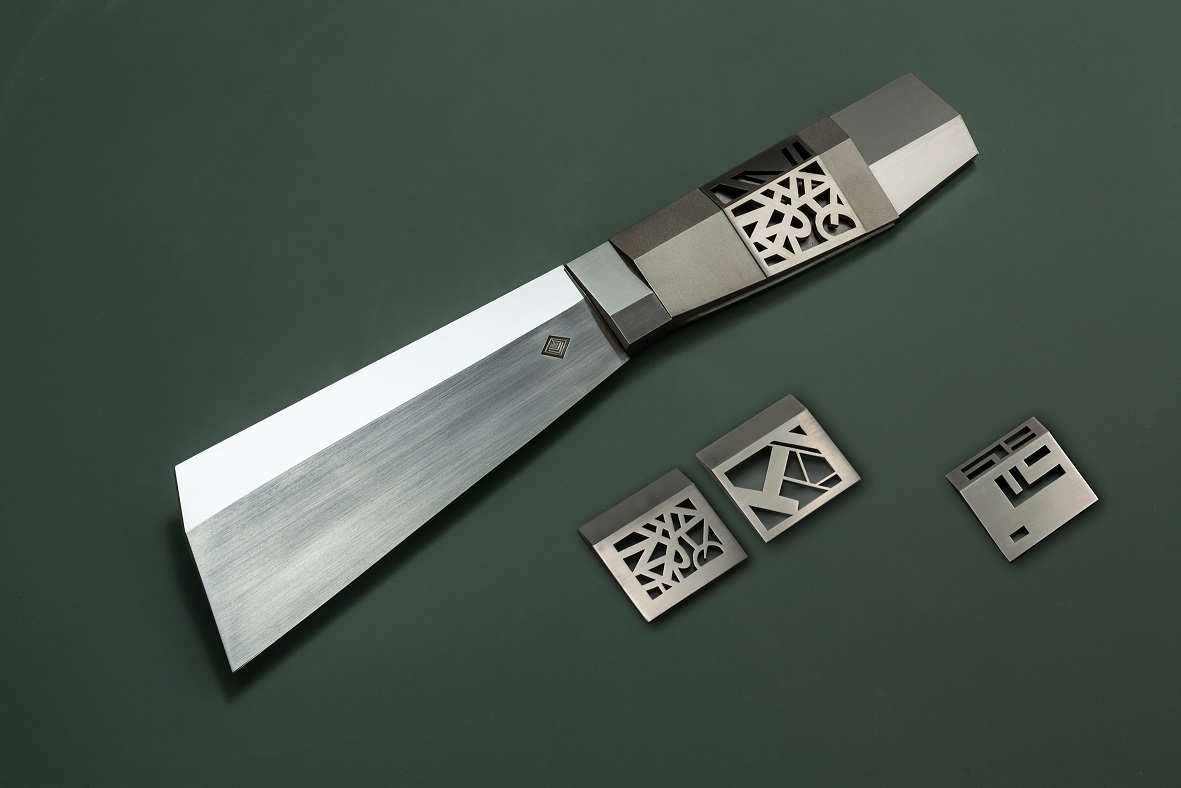 Left: A group of three knives made by Jürgen Steinau between 2009 and 2015. The upper knife is a fixed blade integral, the two lower ones are folders. The fixed blade is made of 440 B stainless. The handle insert is made from Nicorros, a nickel-copper alloy, with inlays of pen-shell and Bakelite. Both folding knives have similar inlays, but their blades are from stainless X42Cr13.
Right: German knife maker Caroline Gubig is an apprentice under Jürgen Steinau, and shares his taste for geometrical shapes. This is one of her latest knives, with a 440 B blade and Nicorros handle insert. Next to the knife are several studies in handle shapes. 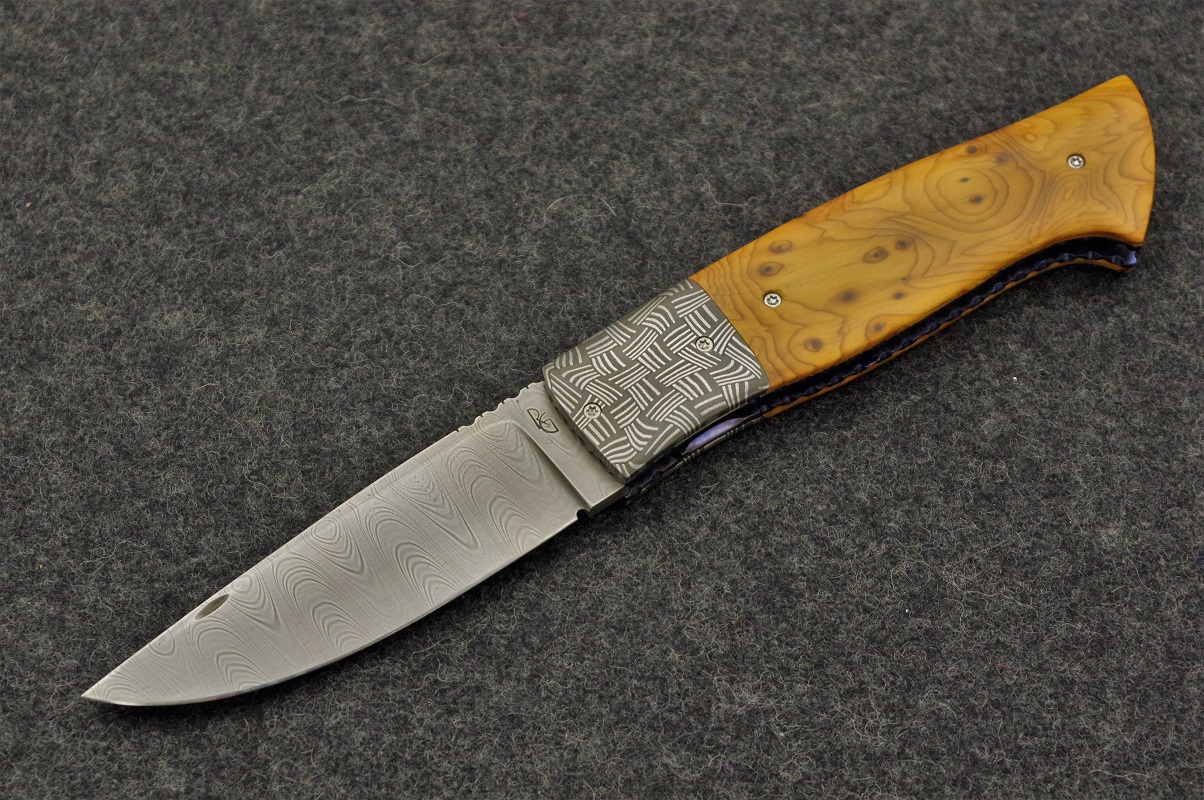 A folding knife by Reiner Grösche. The blade is made of torsion Damascus, the bolsters are mosaic Damascus. 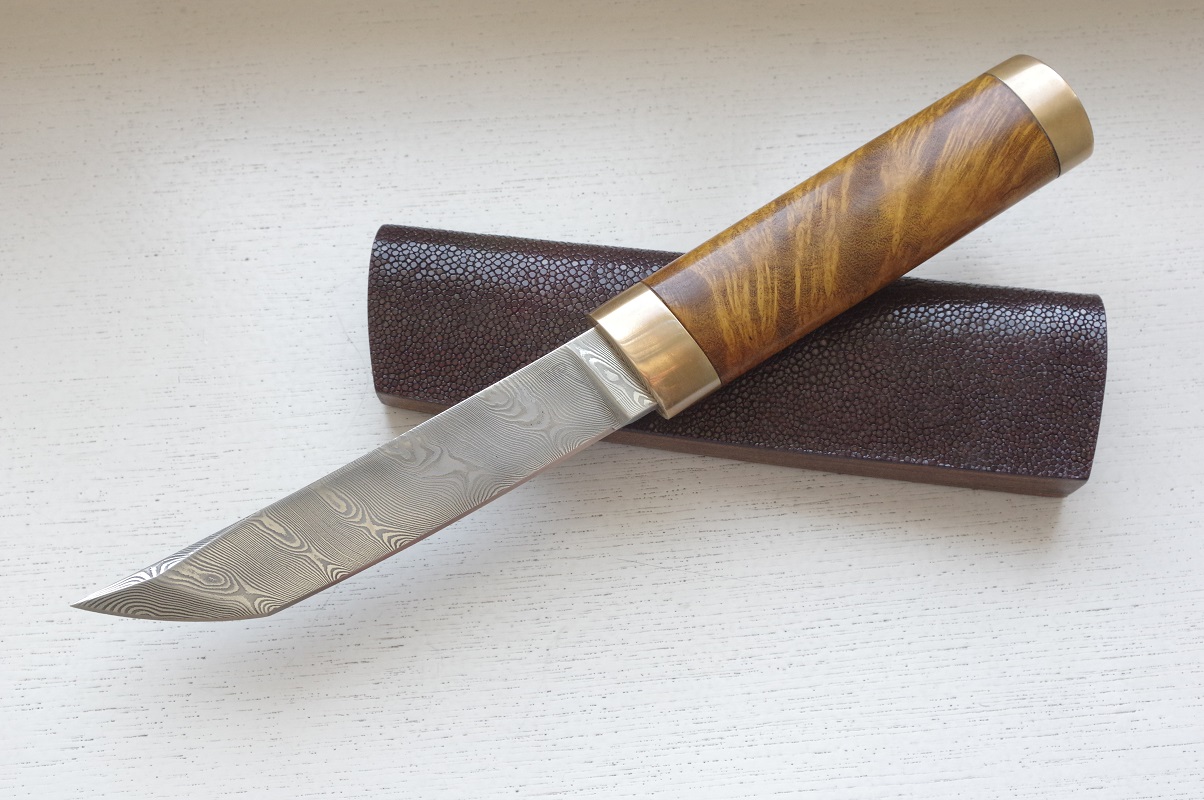