The ancient French town of Langres has a long history in arms- and armour-crafting, dating back to the Middle Ages. Every year in April, Langres has its Days of Arts and Crafts. Part of this is a show of cutlery and scissors, with knifemakers, demonstrations, exhibitions and sales.

Despite a calm start on Saturday morning, the loyal knife collectors found their way to the show anyway.
Sunday started a lot better and ended well. For a small show, there was still plenty of diversity in knives and knifemakers: ranging from artists to amateurs and from professionals to custom makers.
Every year there is a competition for best fixed blade, folding knife and ‘best by jury’. The prize for the best folding knife was won by Frank Souville, the best fixed blade by Frank Herpin and the best by jury was won by Olivier Didier. The accompanying pictures show a small selection of Langres, 2017. 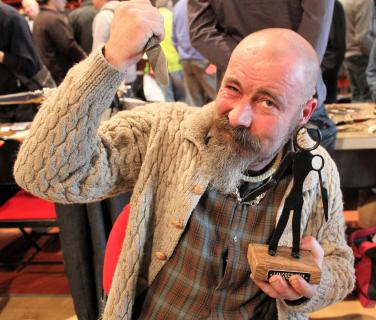 Left: A picture of the show. Right: A knife by Coutellerie Baron de Lys. The blade is made of D2, the handle
is a composite of pineapple with yellow paper spacers.

Left: Knife by Didier Marivet. Blade steel Z40, handle deer antler. Right: A linerlock knife by father and son Alain and Joris Chomilier. Blade and bolster are made from Mike Norris Damask. The handle is mammoth ivory, the liners are titanium.