It was perhaps not quite as one had hoped, but the important thing was that the Lames à Langres show could be held at all. The public interest was somewhat disappointing, but nevertheless, some knifemakers sold very well. The most important thing was the pleasure to be among like-minded people again. 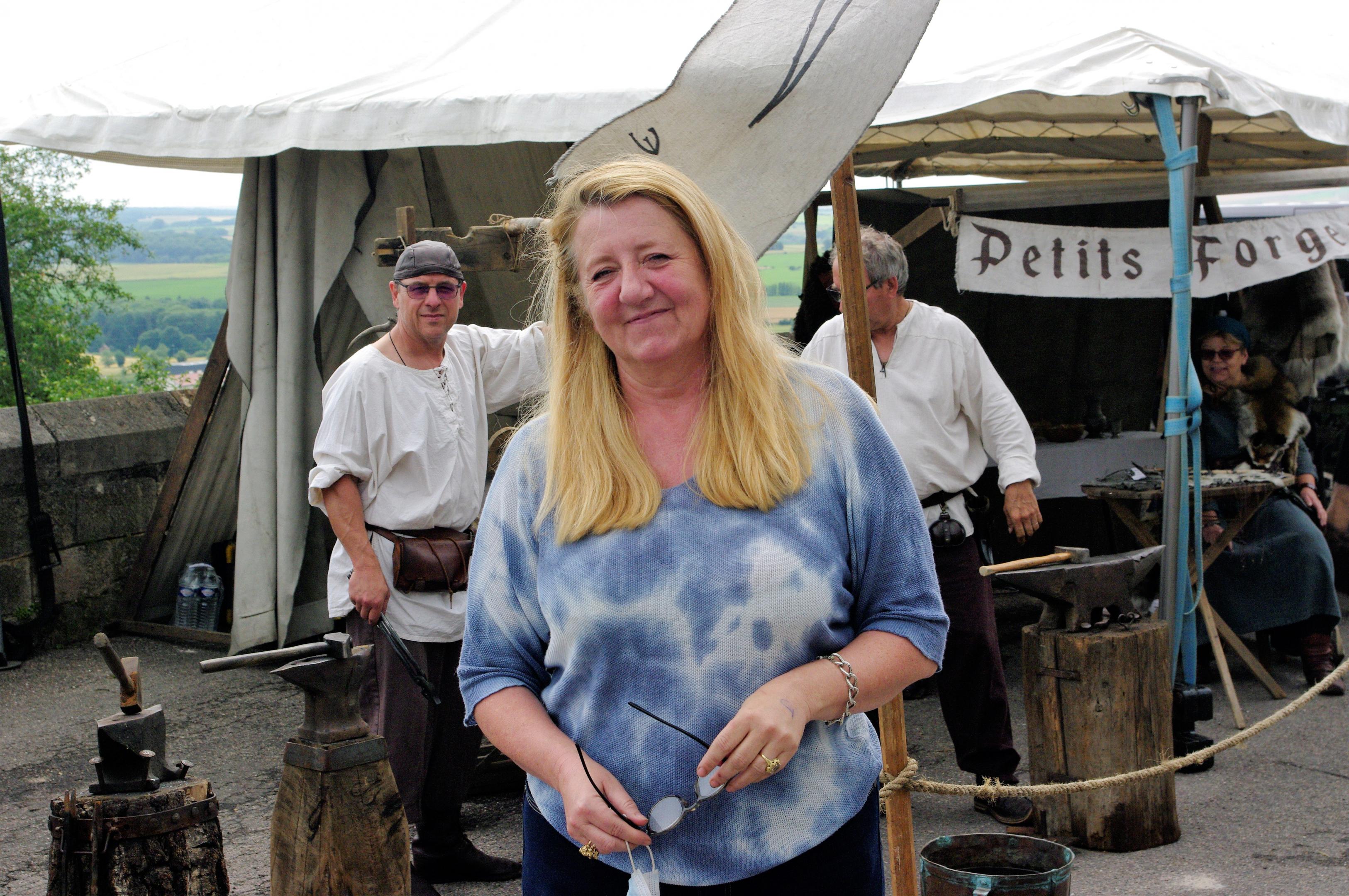 Langres, like many knife fairs, has not been very lucky. Last year the new 'Lames à Langres' should have been a great success. The city of Langres had arranged a nice promotion campaign, but alas: the 2020 edition, scheduled for April 11 and 12 last year, had to be cancelled at the last moment because of the Covid-19 pandemic.
For this year, it was decided to hold the fair, with due observance of all the rules: face masks, disinfection, keeping distance. With some forty exhibitors and a few hundred visitors, the show saw a cautious restart on July 3 and 4.
The organisation of the show currently consists of Nelly Georgemel, owner of Crea Coutellerie Nogent, in cooperation with Bénédicte Batier, Manager de centre-ville of the city of Langres. Both have already worked together on the organisation of the annual Days of Arts and Crafts; they make an excellent team. Nelly Georgemel took over the organisation from Philippe Bernard. She already had experience with fairs and found it a shame to let Lames à Langres disappear. 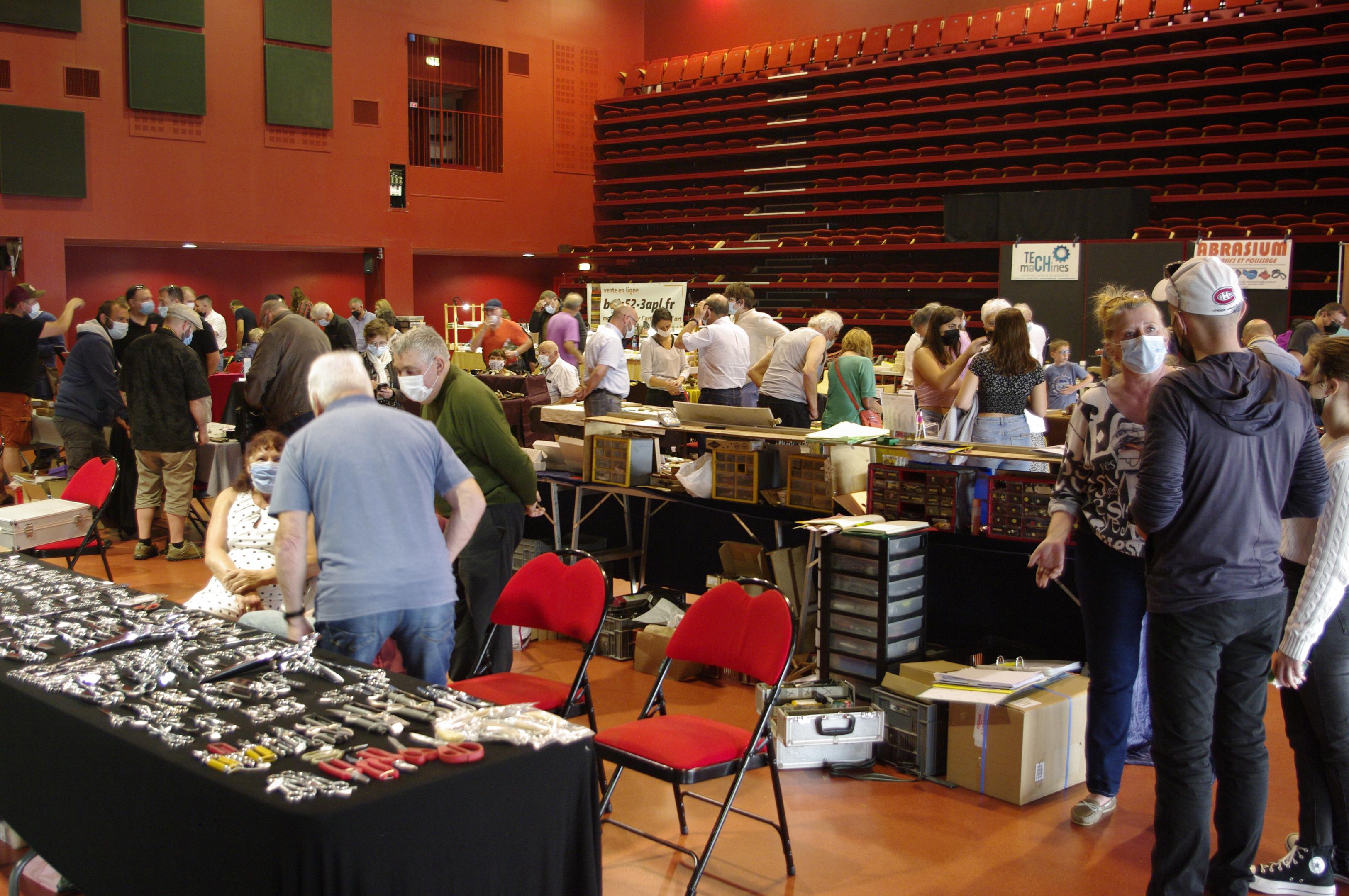 Langres will probably never become a very big show. The Salle Jean-Favre has room for fifty to sixty exhibitors - enough for an attractive offer. Moreover, Lames à Langres is always held together with the Days of Arts and Crafts, for which Langres attracts extra visitors. For next year’s show, more attention will be paid to the information, with a separate Facebook and Instagram page. The organisation wants to award several prizes again, and considers a joint meal with all exhibitors. In short, there are plenty of plans and there is no lack of enthusiasm. European Blades Mag. will keep you informed.
On the following pages we give an impression of what this year's show had to offer. 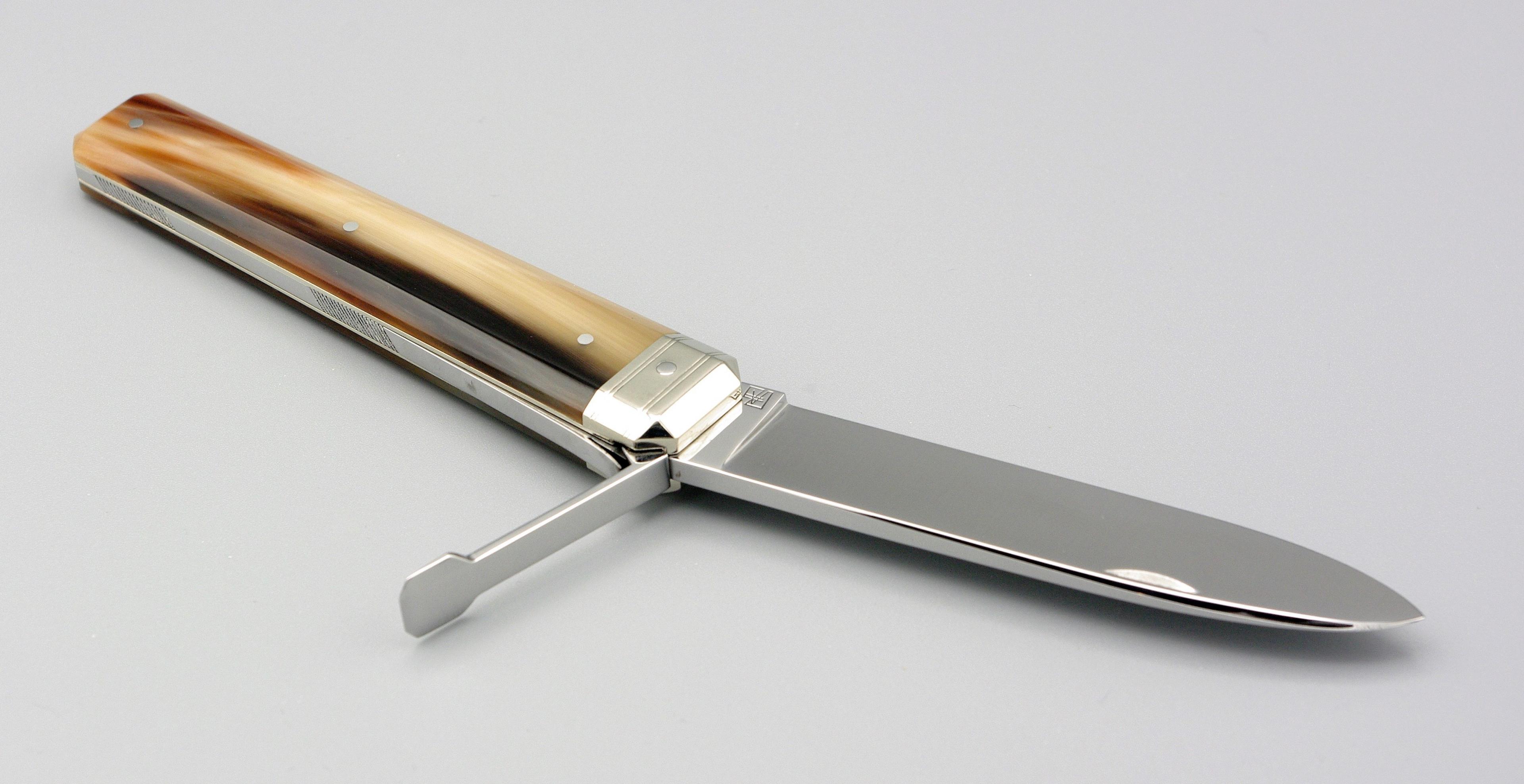 The ‘Facet palanquille’ by Adrien Vautrin. Palanquille means as much as hoist, and refers to the mechanism.
The detent has to be lifted by a lever to unlock the blade. The 114 mm blade is 14C28N steel, the handle
is made from Zebu horn. 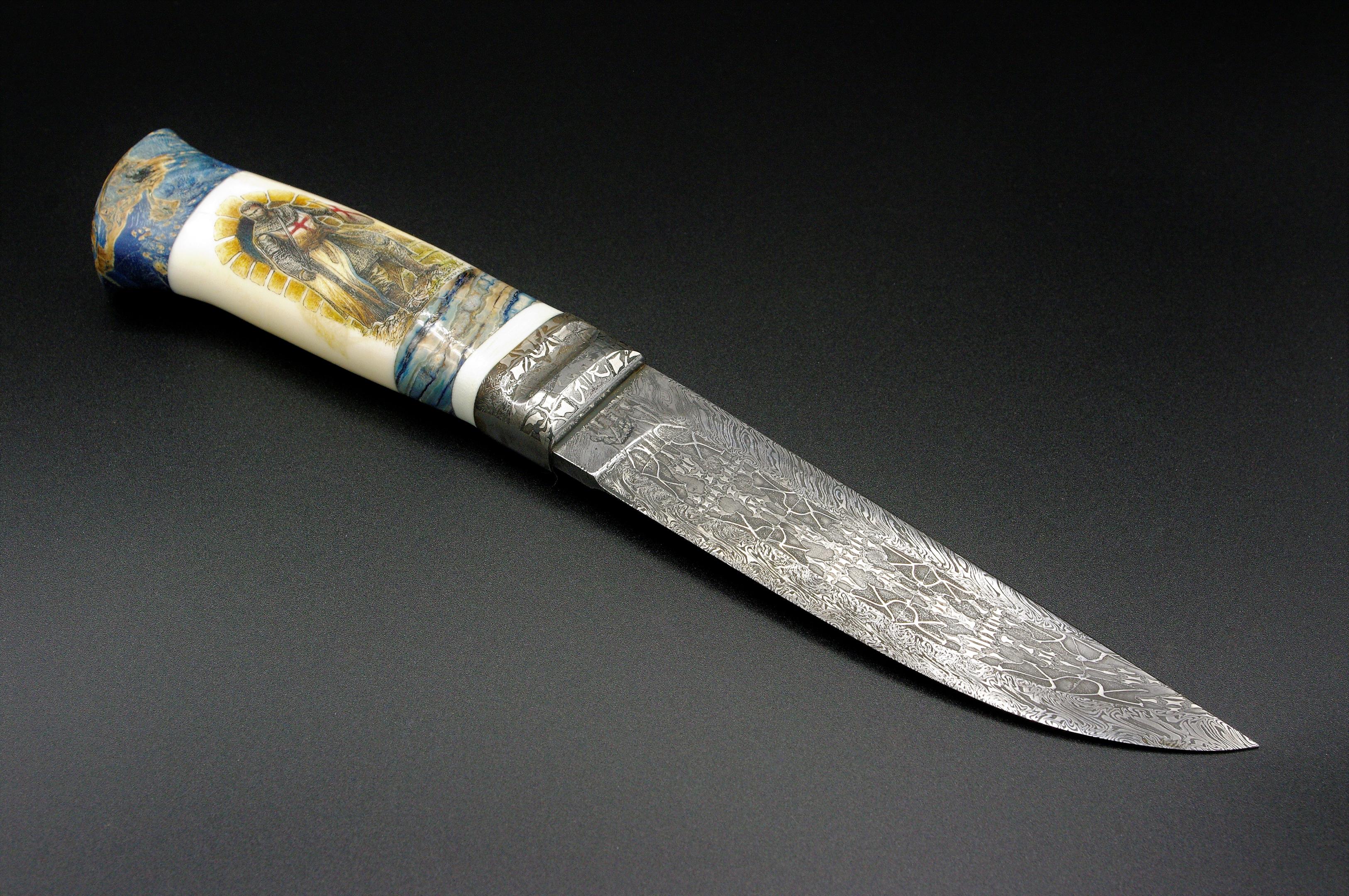 ‘Le Templier’ (the Templar) by Daniel Vally. The fixed blade is made from a combination of explosion Damask
and mosaic Damask. The handle is warthog and stabilised mammoth tooth, engraved with the image of a
Templar by scrimshaw artist Christian de Camboulives. 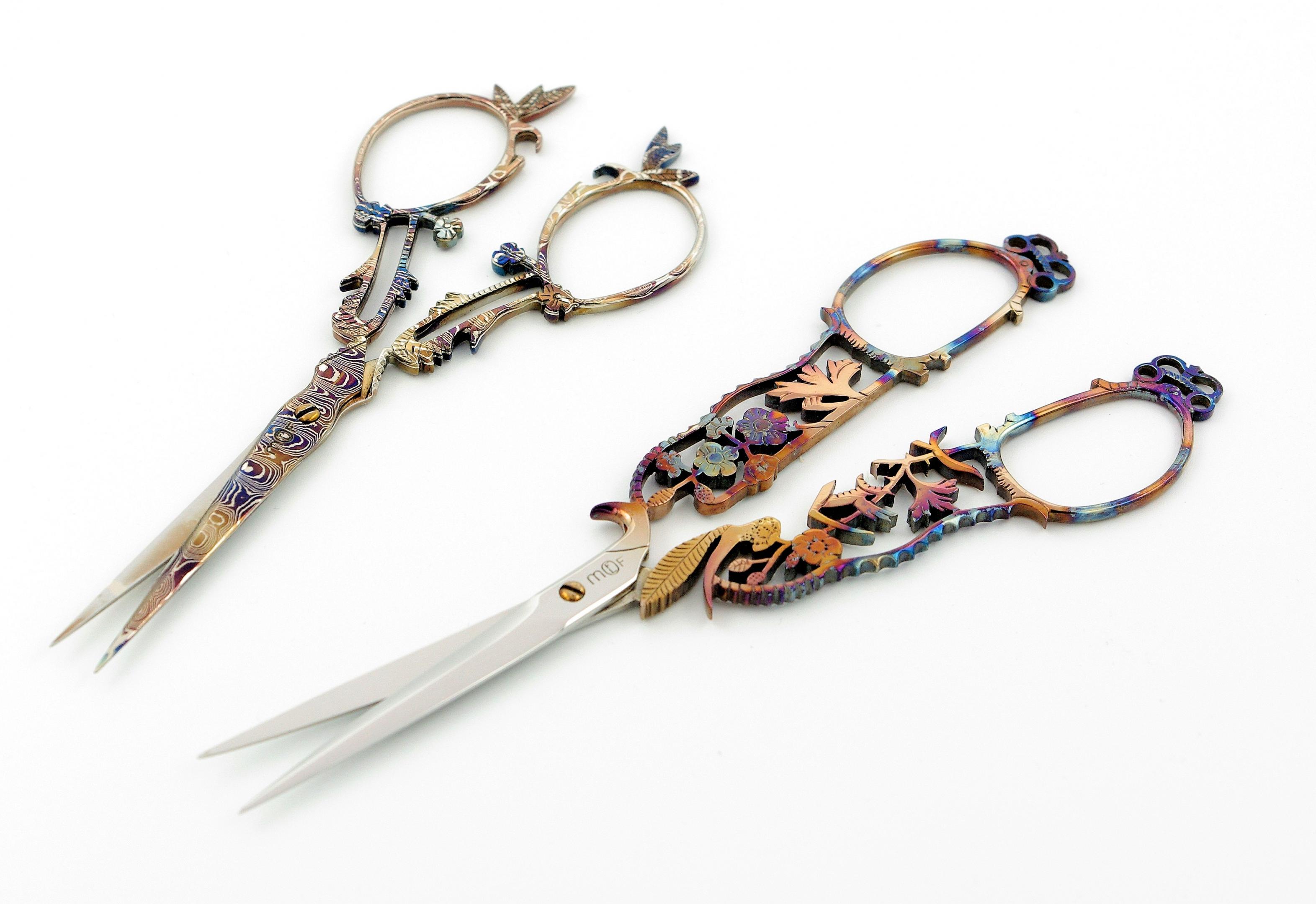 Fabrice Liiri is a ‘ciselier d’art’ (art chiseler). He won the title of ‘Meilleur Ouvrier de France’ (best
French craftsman) in 2007. Liiri specializes in scissors, which take between 30 and 130 hours to make.
Two examples are pictured here. The one on the left measures 120 mm and is made from Nickel
Damask, the one on the right is 130 mm long and is made from Z40C13 Inox. Both are flame coloured. 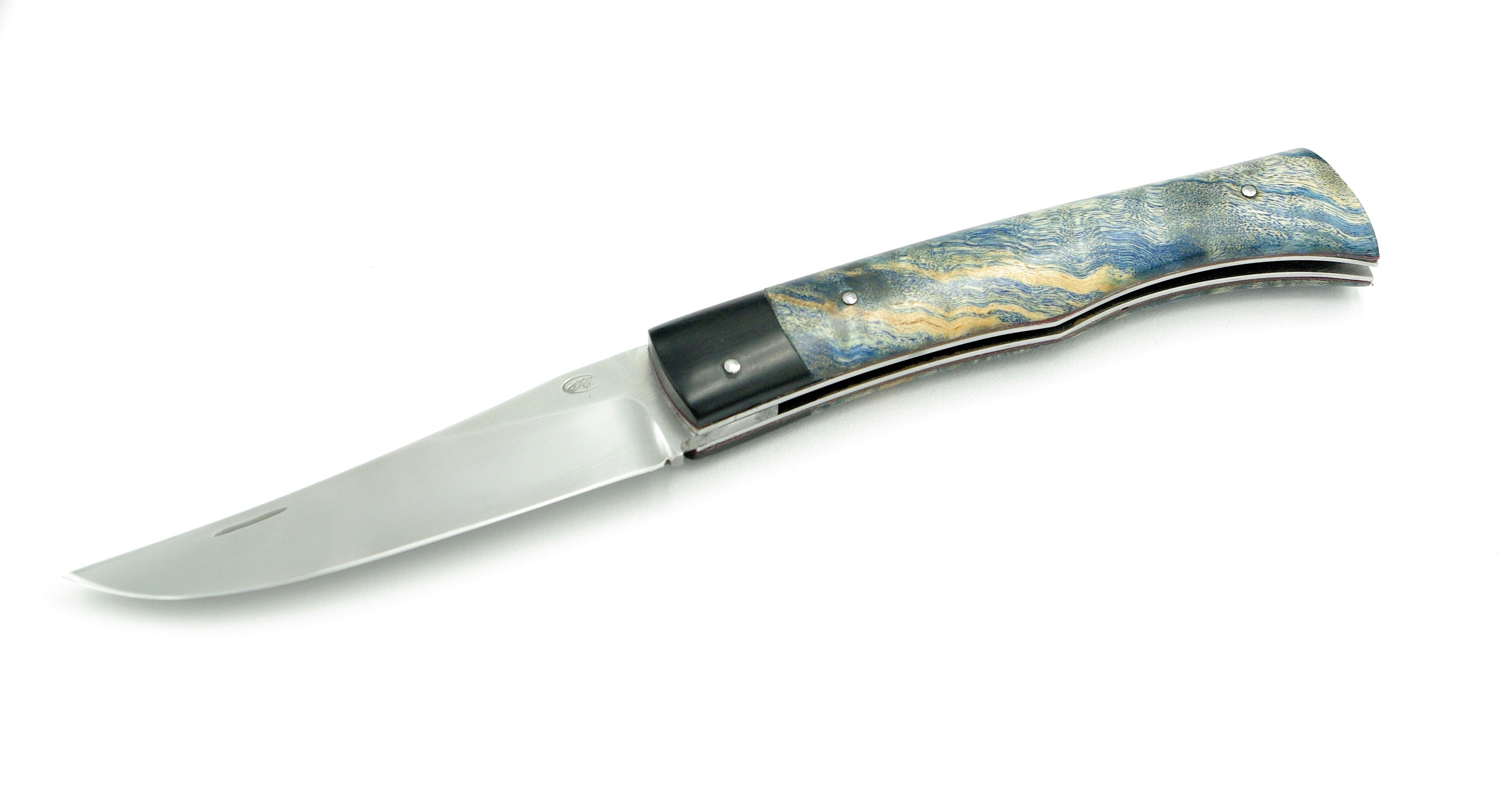 A notched slip joint by François Chapuis. The blade is 14C28N inox, the handle is Ebony and blue
stabilised Poplar. 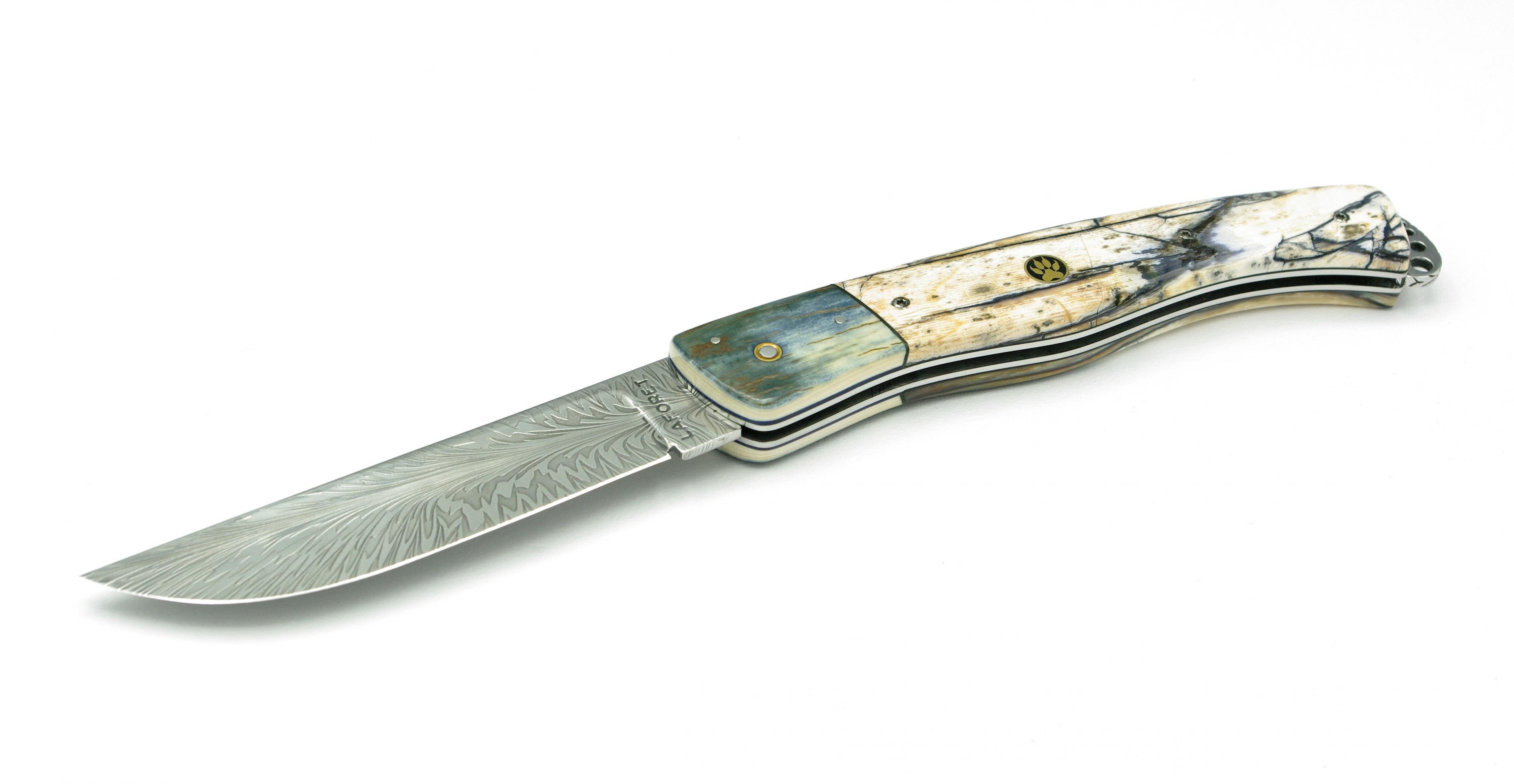 ‘Le Grand Cran Carré’ (the large notched slip joint) by Jean-Claude Laforet. The blade is Zladinox feather
Damask, the handle is Mammoth ivory. The knife is an interpretation of the model ‘Thiers’. 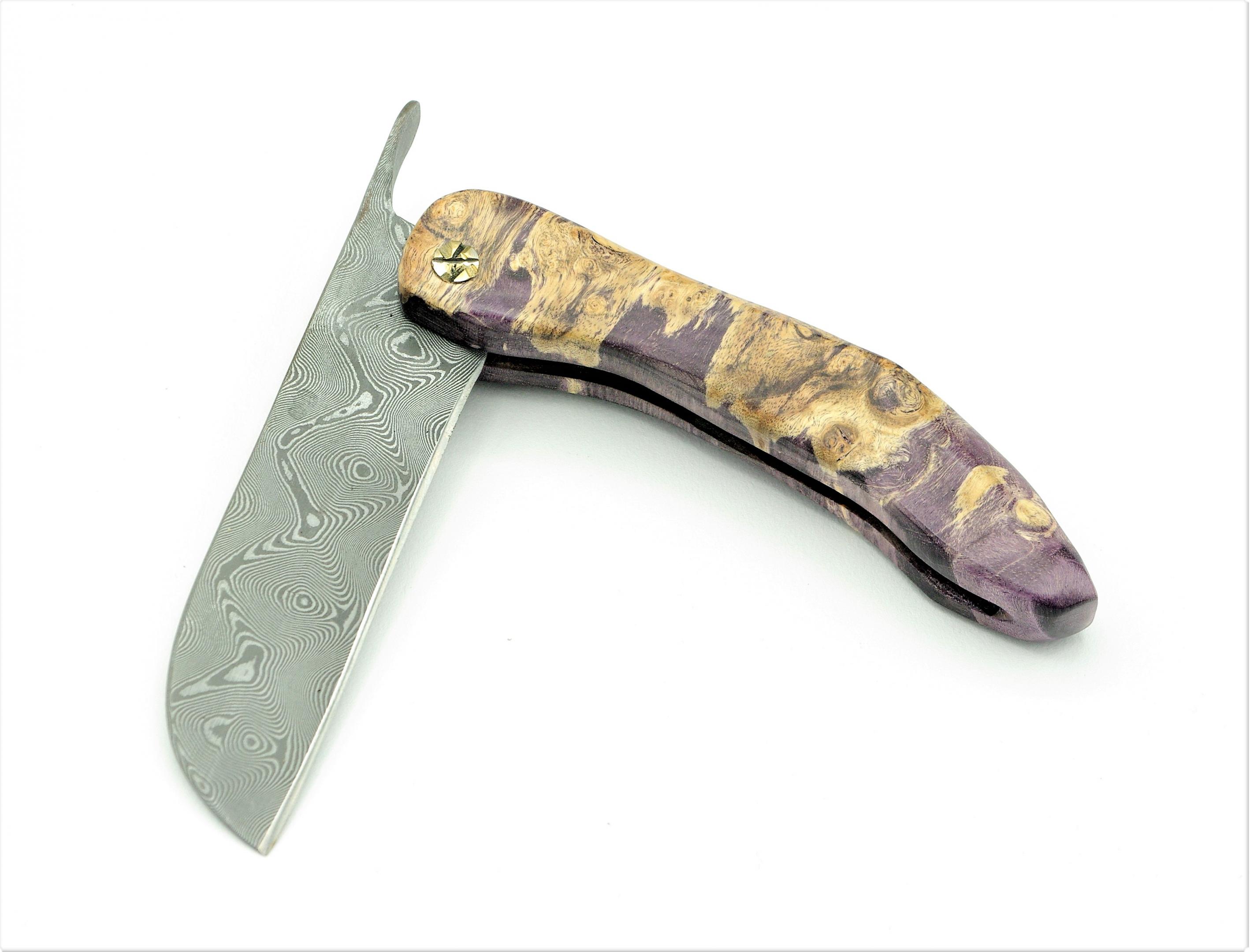 ‘Le Macelou’ by Dominique Macel. The blade is 15 layers of ‘brut de forge’ 90MCV8 – 15N20 Damask,
the handle is made from different pieces of wood. The overall length of the knife is 195 mm. 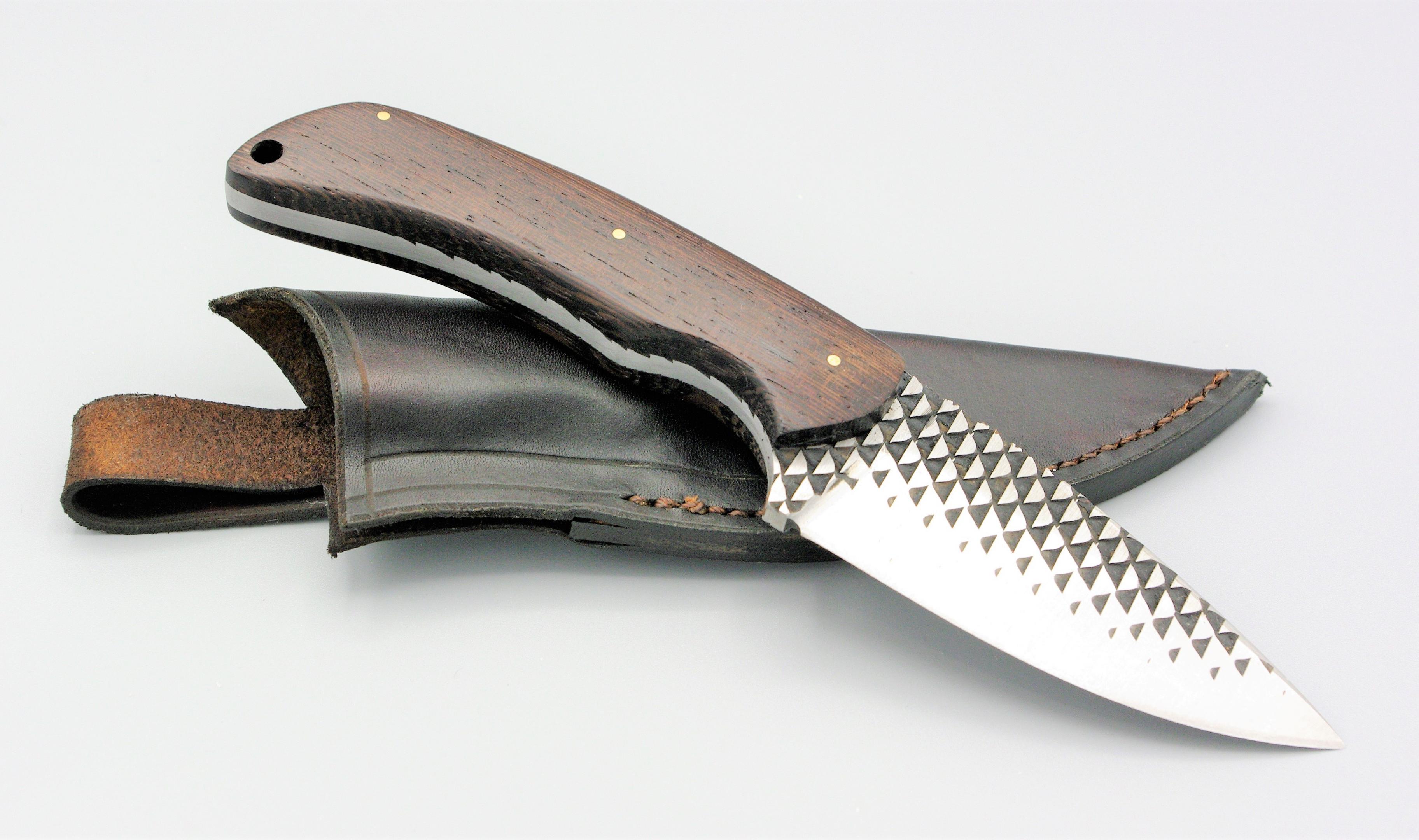 Jean-Yves Drouard made this ‘Little Trapper’. The blade was made from an Maréchal-Ferrant file, the
handle is Wenge wood. 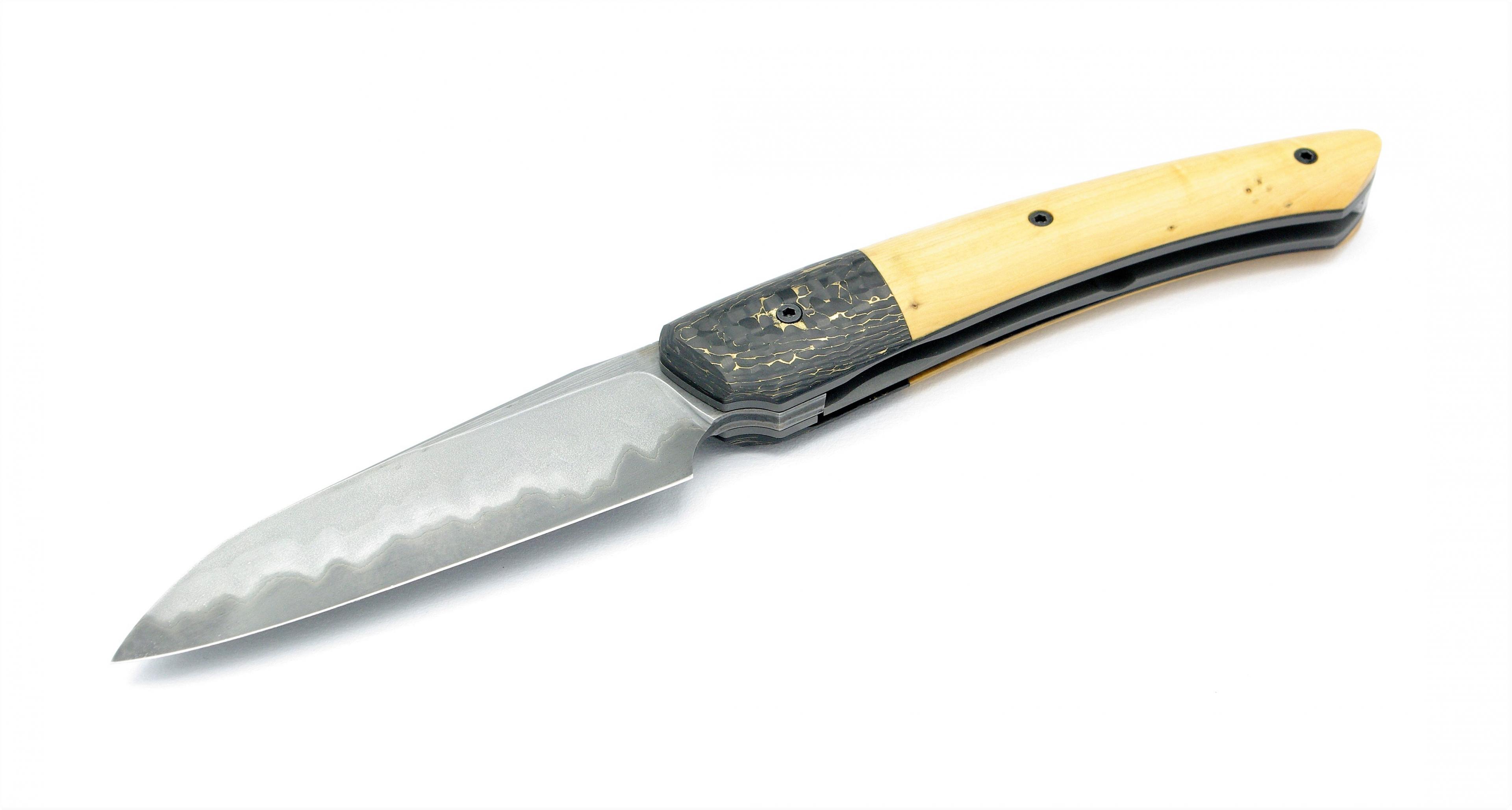 The ‘Falco’, a linerlock folding knife by Olivier Lamy (Coutellerie Skua). The blade is San Mai inox and
carbon, the bolsters are from Fat Carbon and the handle scales are wood.

The ‘Obit’, a liner lock folding knife by Thibaut Pecheux. The blade is 135cr3 carbon steel, the handle
has Z20 inox liners, a black G10 spacer and stabilised Hornbeam scales.

Two versions of the ‘Eastwood Tiger’, a design from Dutch knife maker Gudy van Poppel commissioned
by Tools for Gents. The one on top has a CPM S90V blade and titanium handle, the one below has a
D2 blade and aluminium handle. Both are made by the Italian company Fox Knives. 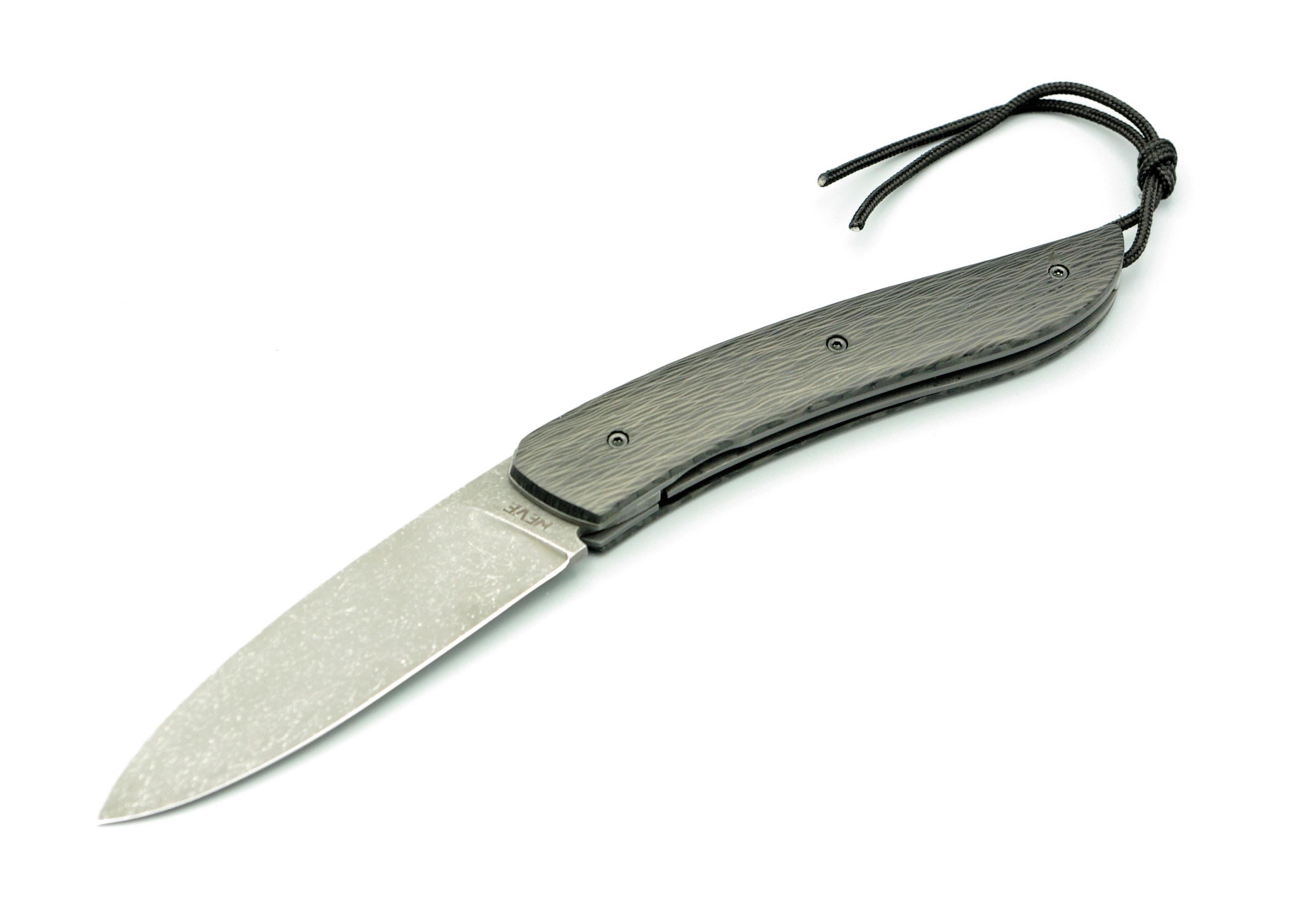 Tim Bernard is known for his ‘Névé’. This is a variation, the ‘Névé flipp’, which has a very discreet
flipper to its RWL34 blade. The handle scale are carbon fibre.

The ‘Houston’, a fixed blade by Franck Herpin. The blade is a combination of hand-forged mosaic
Damask, twisted bars and an XC80 cutting edge. The handle is Warthog tooth and stabilises Birch
burl. The overall length is 35 cm. 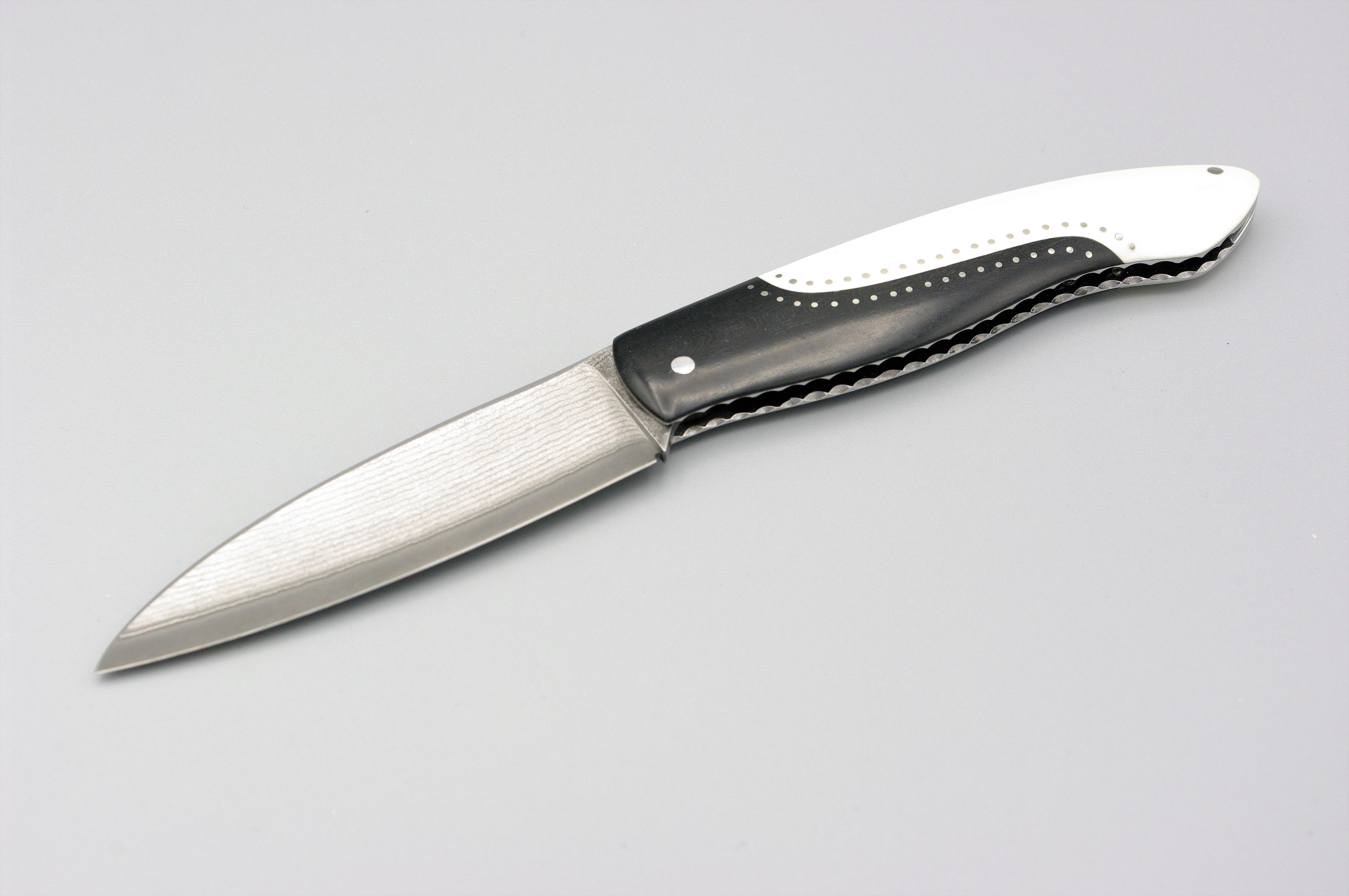 ‘Legros’ notched slip joint by Maxime Rossignol. The blade is VG10 Suminagashi, the handle is made
from Morta (bog oak) and Warthog ivory, with silver pins. The overall length is 195 mm.

‘Le 1920’ by Philippe Bernard. The knife has a Z40 blade and coloured stabilised beechwood handle.
The overall length is 20 cm. 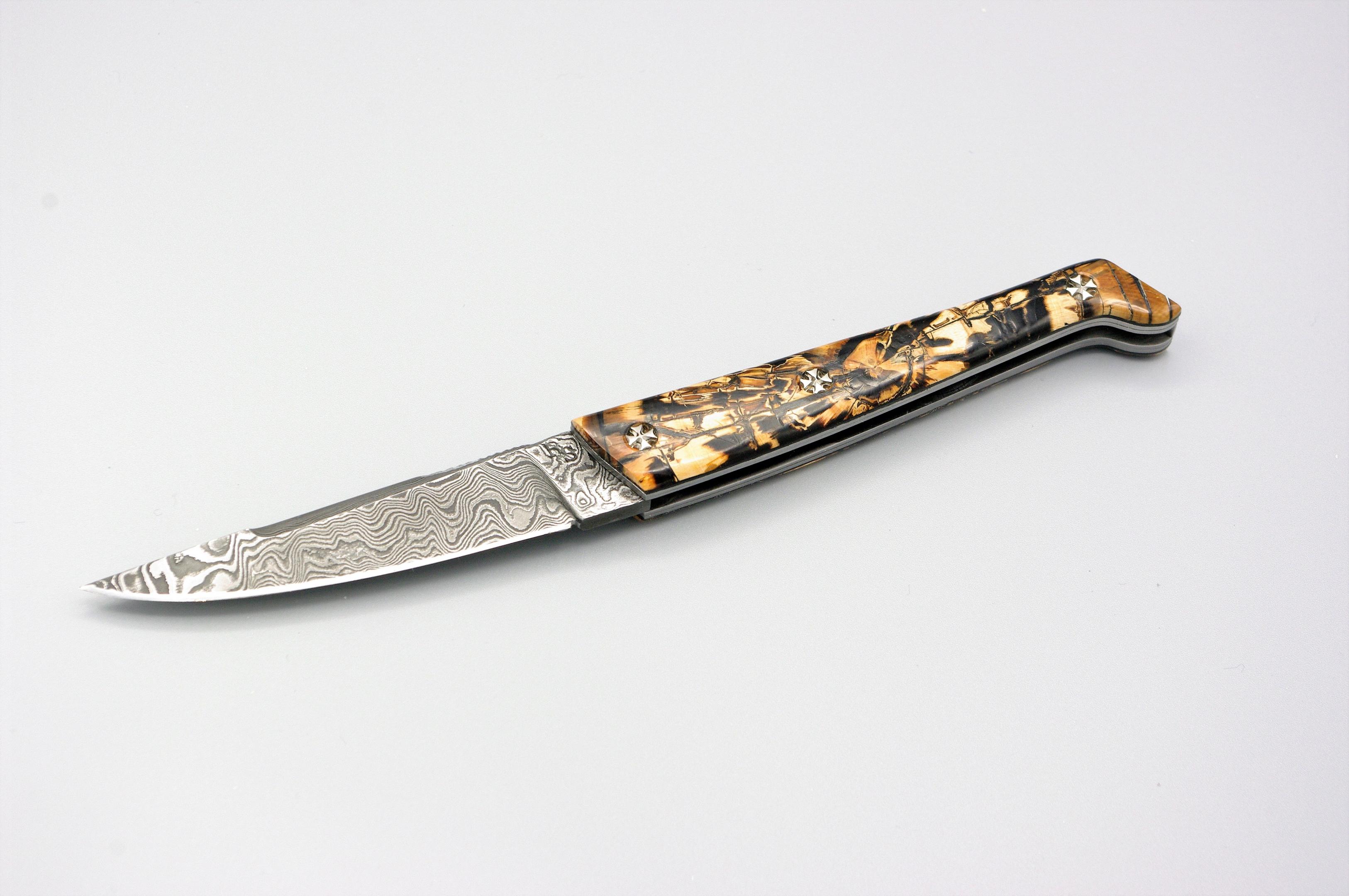 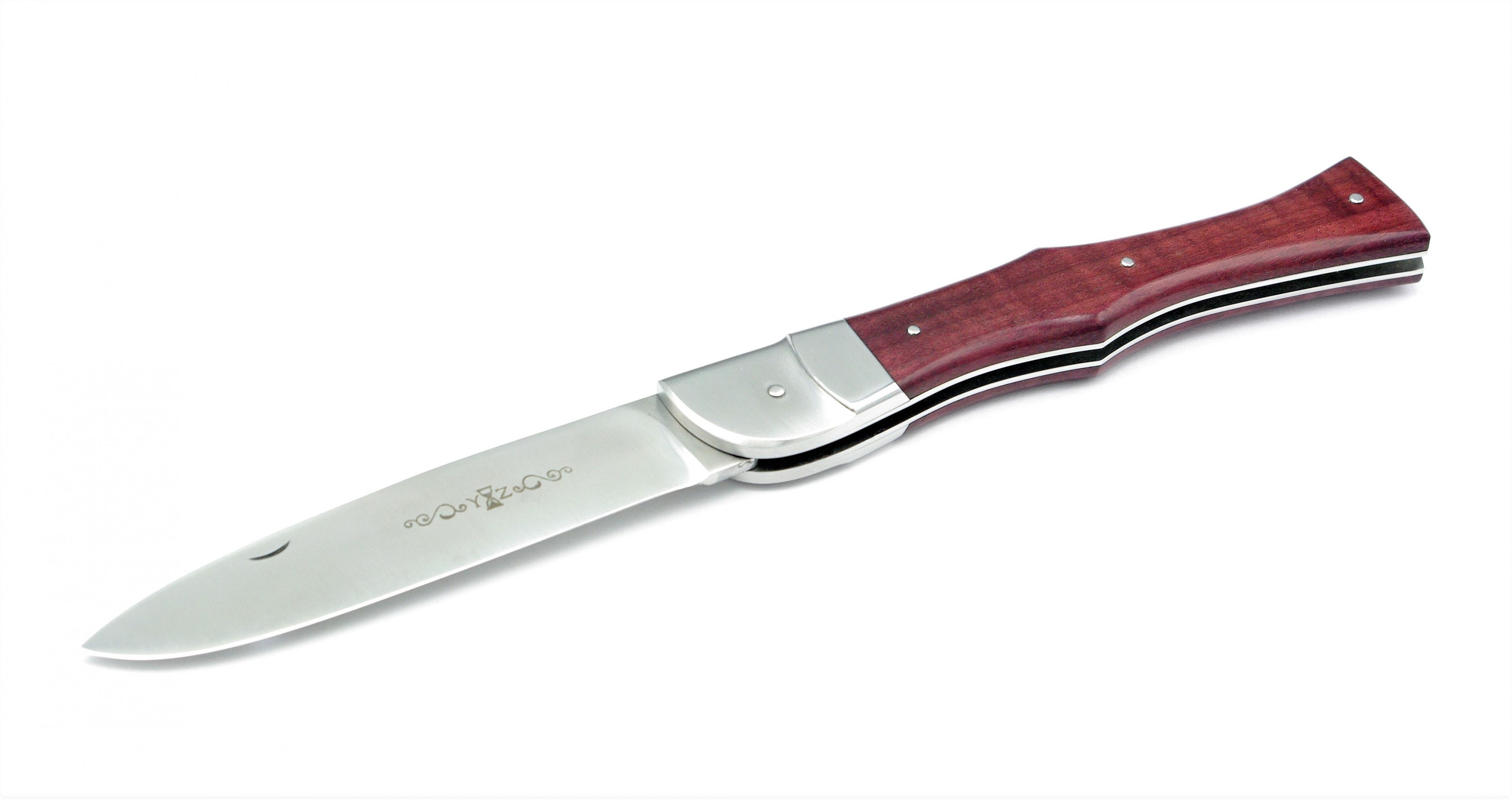 ‘Le Vertical’, a slipjoint folder by Yoann Ziegler. The blade is Z50CDV15 inox, the handle is made from
Amarante wood. The opened length is 25 cm. The knife gets its name from a special locking mechanism,
in which a little ball blocks the movement of the blade. The knife has to be held vertical for gravity to
move the ball away. 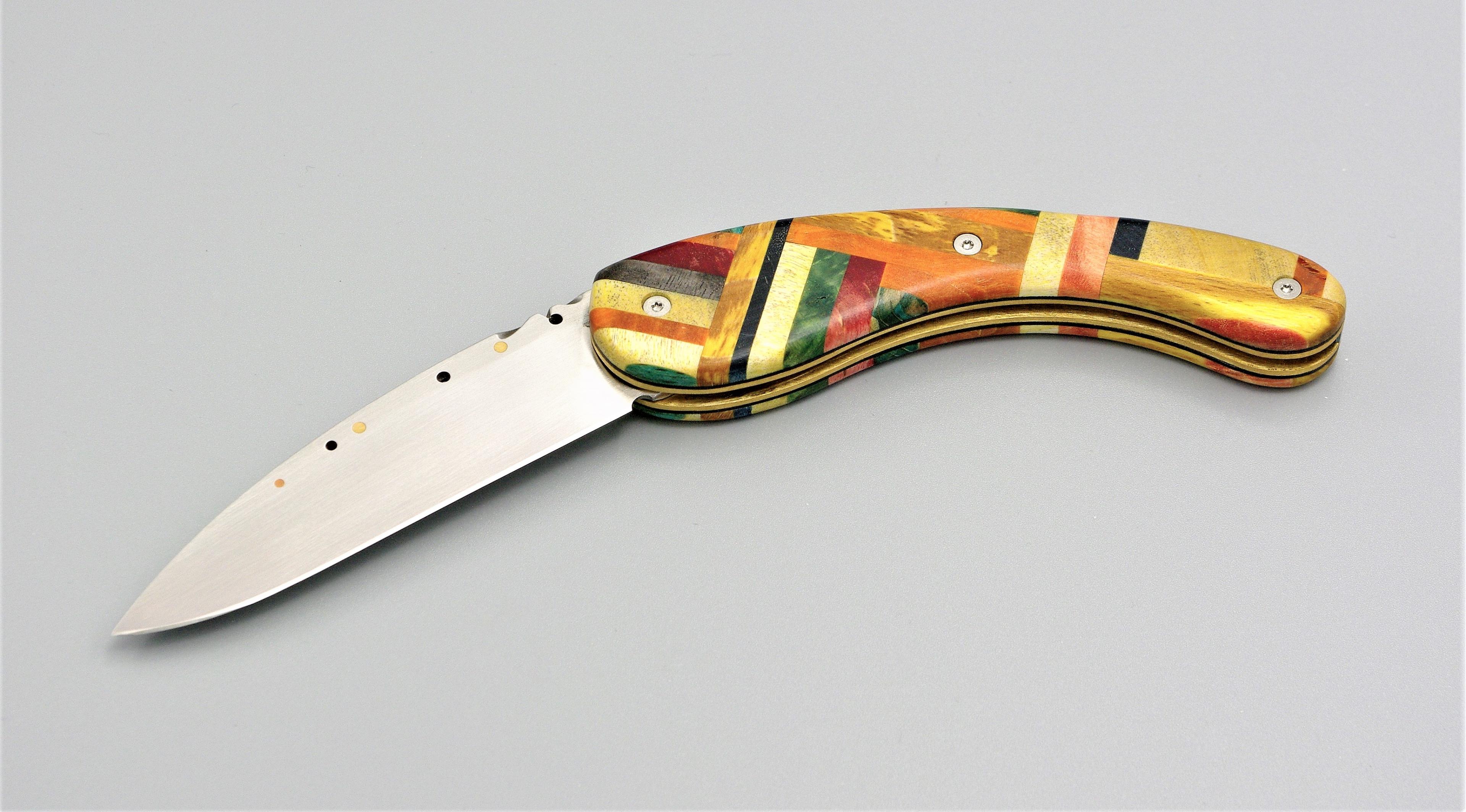 The ‘Parallèlépipèdes’ by Raphaël Calu. The knife has a 120 mm 14C28N blade with copper and brass
inlays. The handle has brass liners and handle scales from various pieces of stabilised wood. 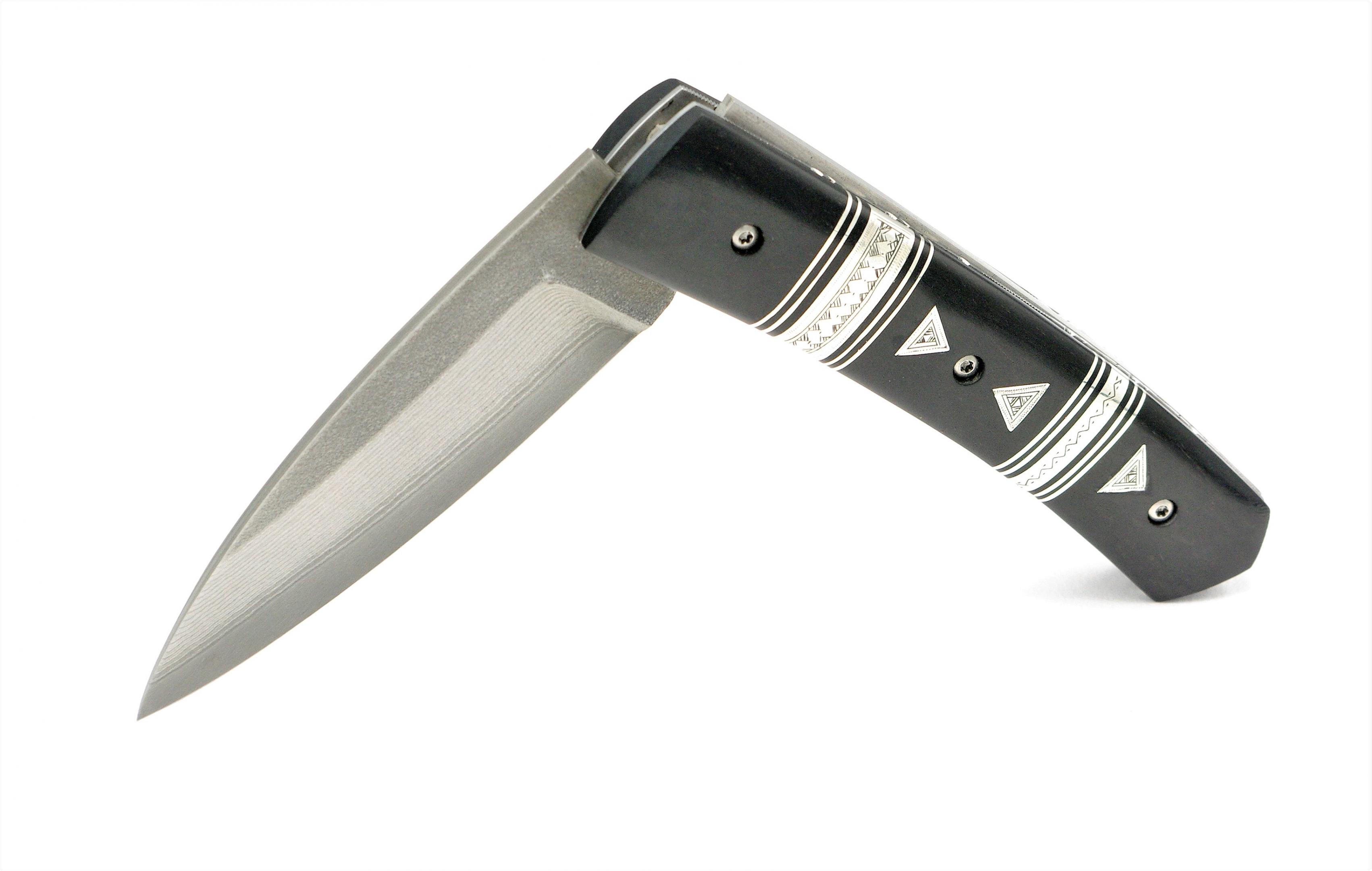 The ‘Salm’ by Sebastien Kaps. The blade is Suminagashi with 47 layers of VG10, the handle is silver
and Ebony, inspired by traditional Tuareg jewellery. 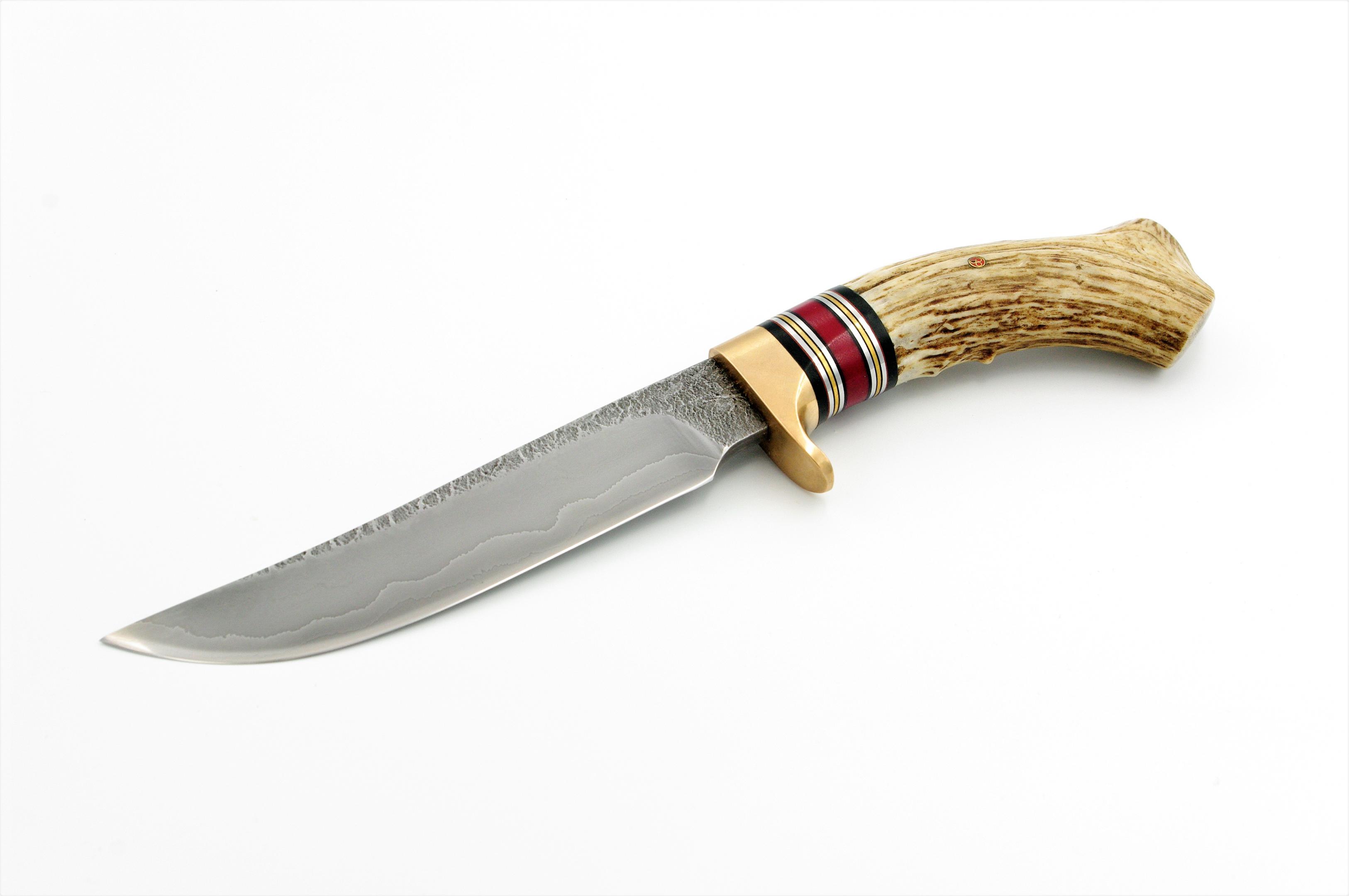 A Puukko by Remy B. The 90 mm blade has 240 layers Damask, the handle is Goldfield burl. The overall
length is 205 mm. 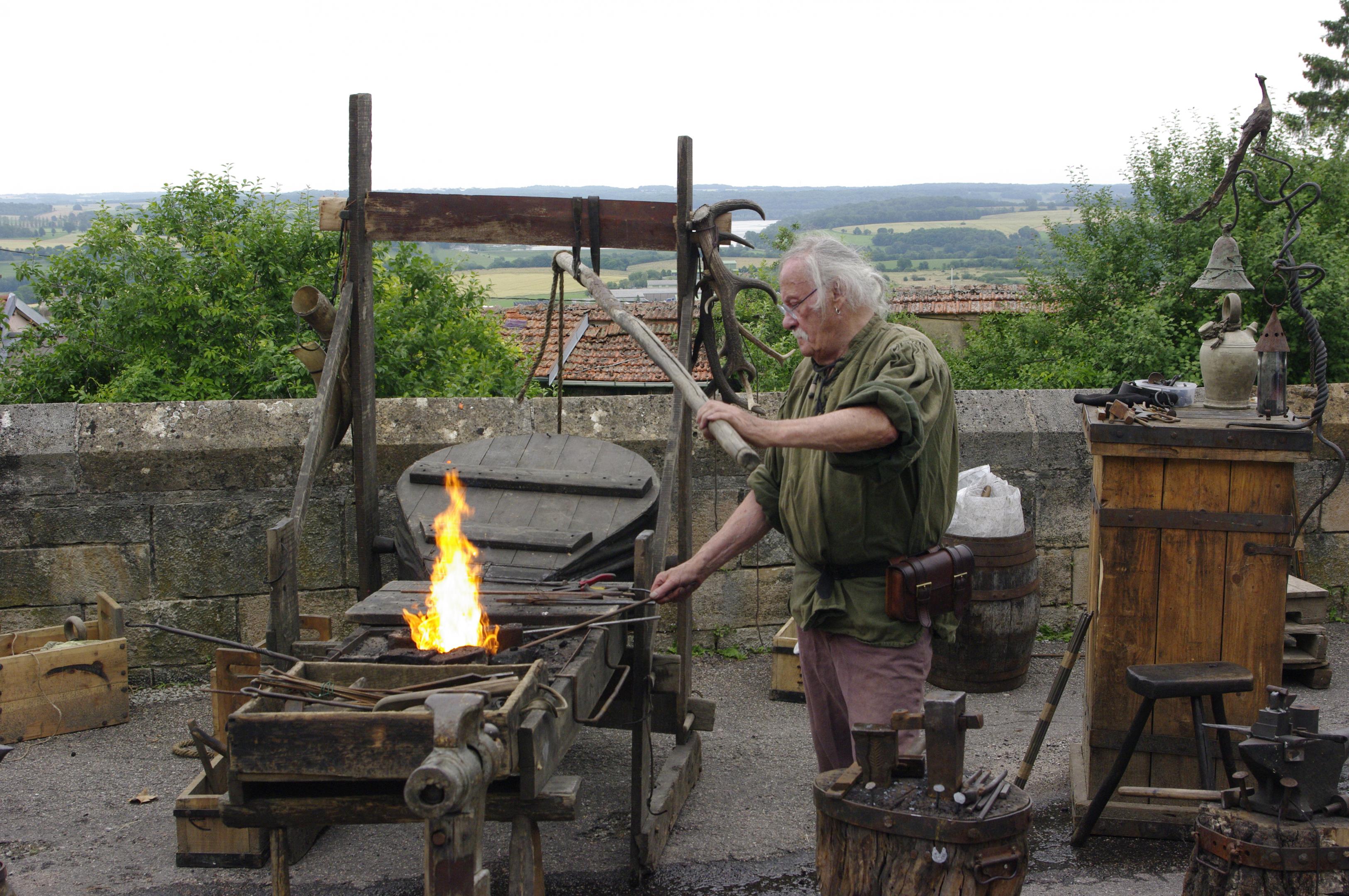