The 16th edition of the German ‘Olchinger Messertage’ (Olching Knife Days) was held on October 12 and 13 this year, in Olching, a community near Munich.

The Olching Knife Days are not your typical knife show. The majority of the participants are members of the Olching Knife Working Group, which was established in 2002, albeit under a different name, by three knife makers: Ernst G. Siebeneicher-Hellwig, Erwin Schneller and Manfred Ritzer (deceased). Their idea was form a group of knife makers, who could meet regularly and exchange information and experiences.
The Working Group was fortunate enough to have one of the best German knife makers, Dietmar Kressler, as an early member. It could gather regularly in his workshop. In  October, 2004, the first Olching Knife Days were held. This coincided with the opening of the ‘Kulturwerkstatt am Olchinger Mühlbach‘ (KOM), an ancient mill and stable, which were beautifully restored between 2002 and 2004. The KOM now serves as a home for a wide range of cultural activities, including the Knife Days. 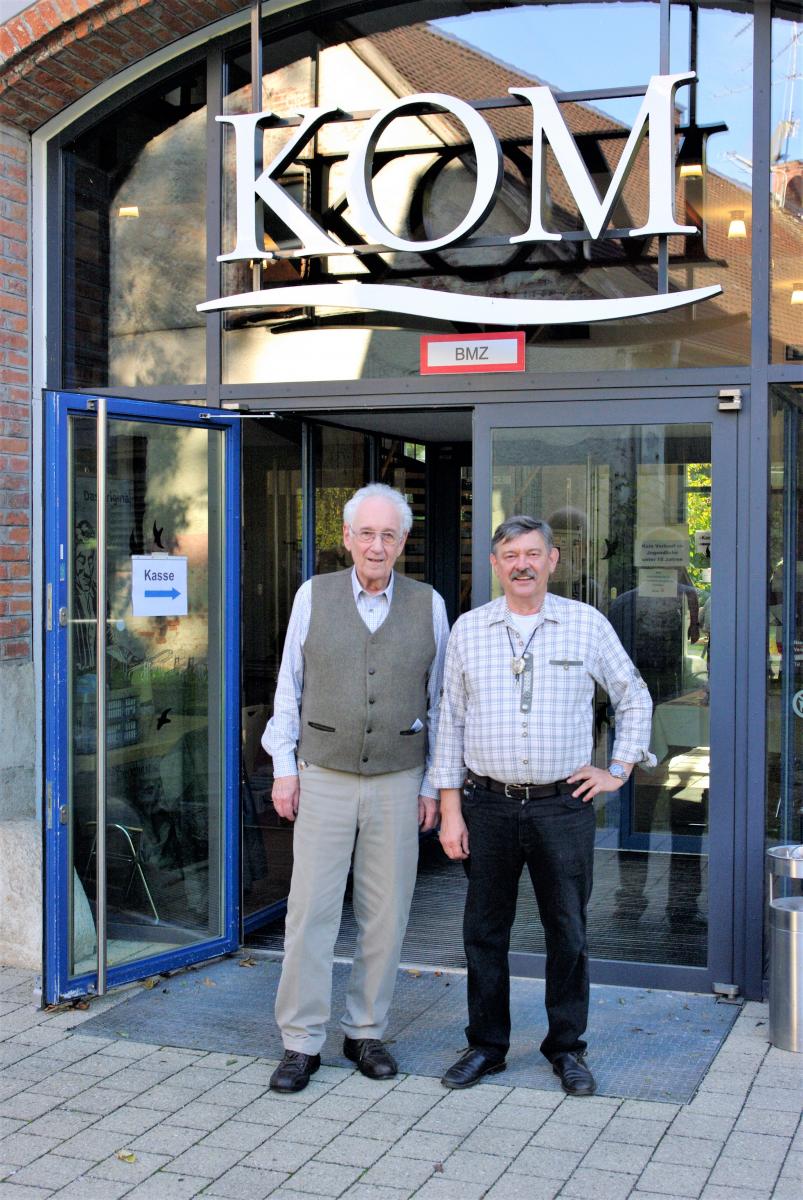 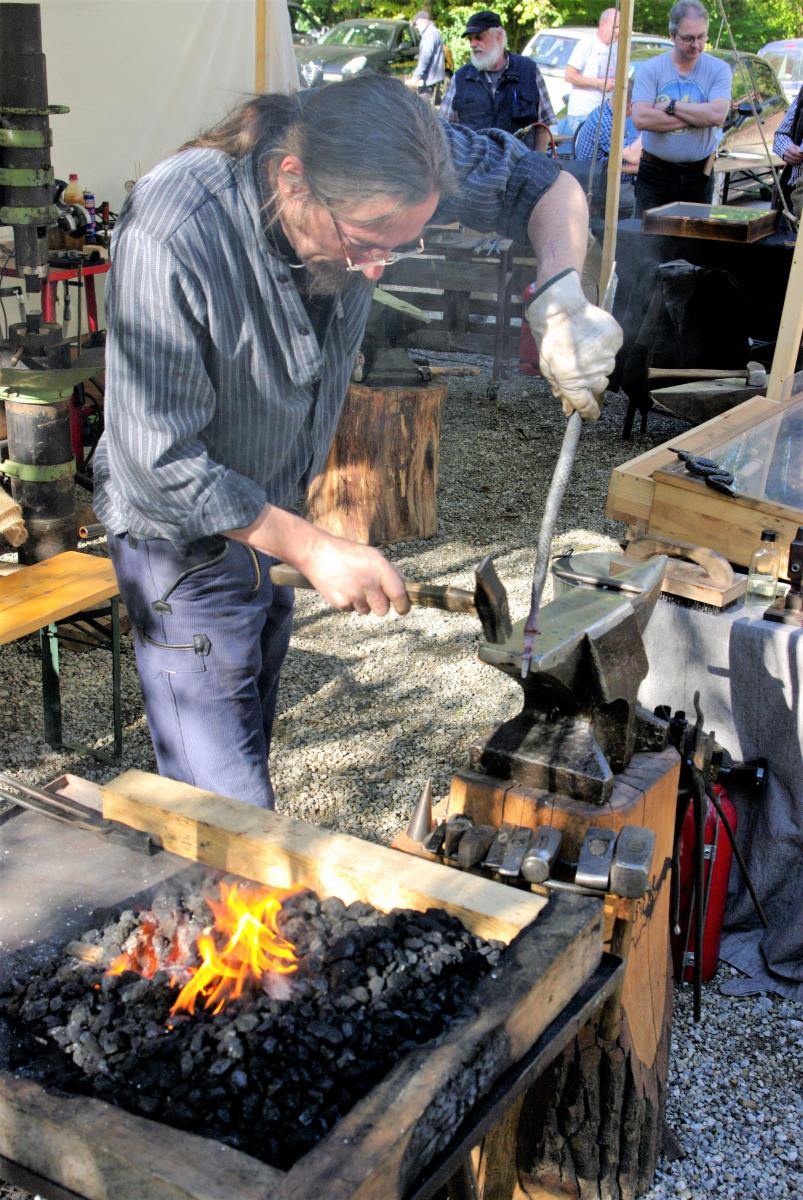 Left: Erwin Schneller (left), leader of the Olching Knife Working Group, and Ernst Siebeneicher-Hellwig,
organiser of the Knife Days. Together with Manfred Ritzer (deceased) they are the founders of the Olching Knife
Working Group.
Right: No knife show without a blade smith.
Since its inception, the event has remained basically unchanged. The members of the Knife Woking Group meet once a month among themselves, and they have two exhibitions. The Autumn exhibition, which is held in October, features a maximum of 50 exhibitors, almost all members of the Knife Working Group. There is only a handful of other makers, who have either been invited or applied through the organization. Since 2015, there is also a Spring Exhibition, exclusively for members of the Working Group.
The Knife Days are a very relaxed event. As nearly all the exhibitors are members of the Working Group, they know each other very well. This year, Ernst Siebeneicher has taken over the show organisation from Erwin Schneller, who remains leader of the Working Group, but he does not intend to make any changes. The show is content to stay as it is. And rightly so. The level of workmanship is very high, as can be seen from the accompanying pictures. A visit is worth the trip. Next year’s Spring exhibition will be on April 26, the Knife Days are planned for October 10 and 11, 2020. 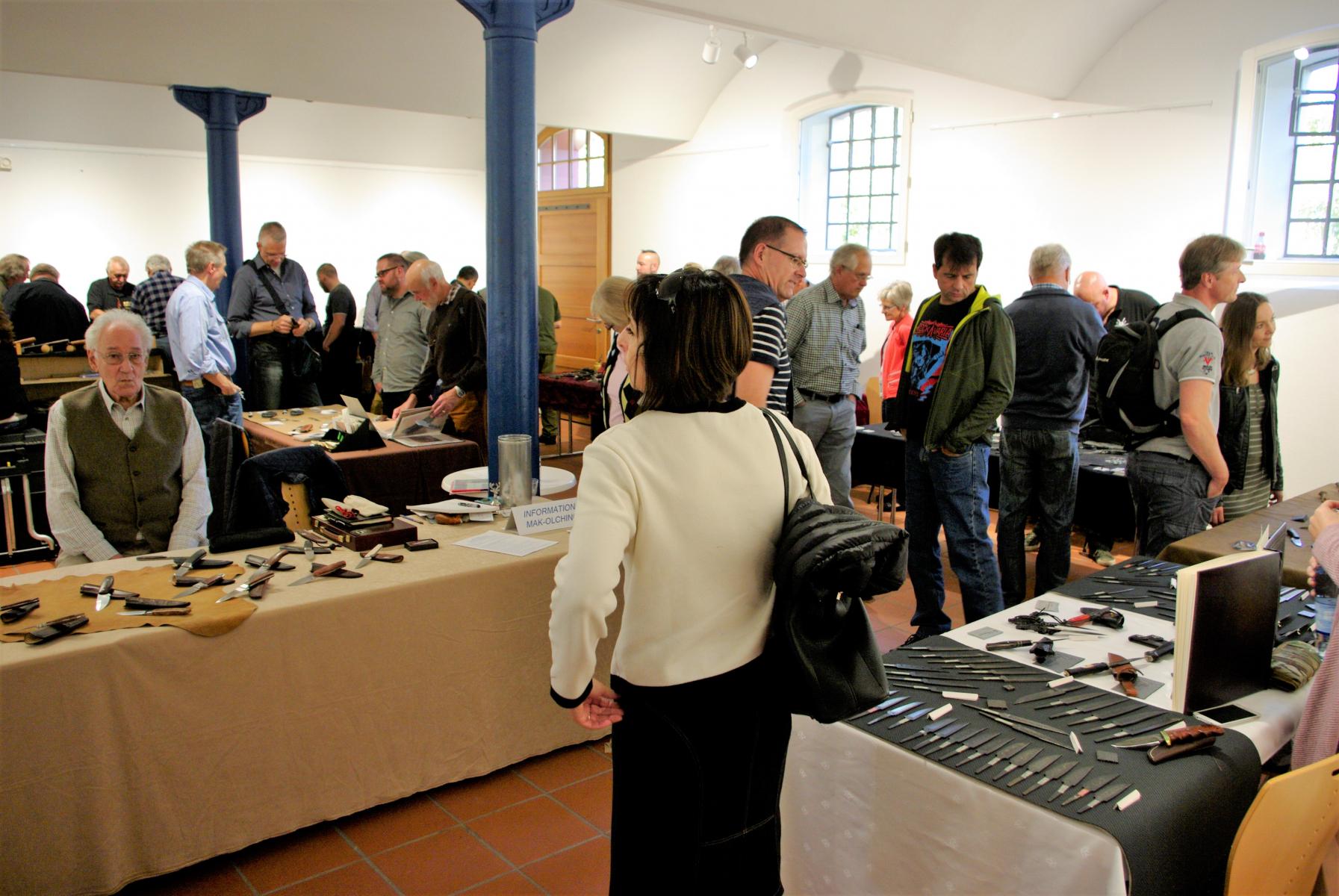 Since 2004, the Olching Knife Days are held in the ‘Kulturwerkstatt am Olchinger Mühlbach‘ (KOM). An
ancient mill and stable, the building was beautifully restored between 2002 and 2004 and now serves as
a home for a wide range of cultural activities, including the Knife Days. This is part of the ground floor. 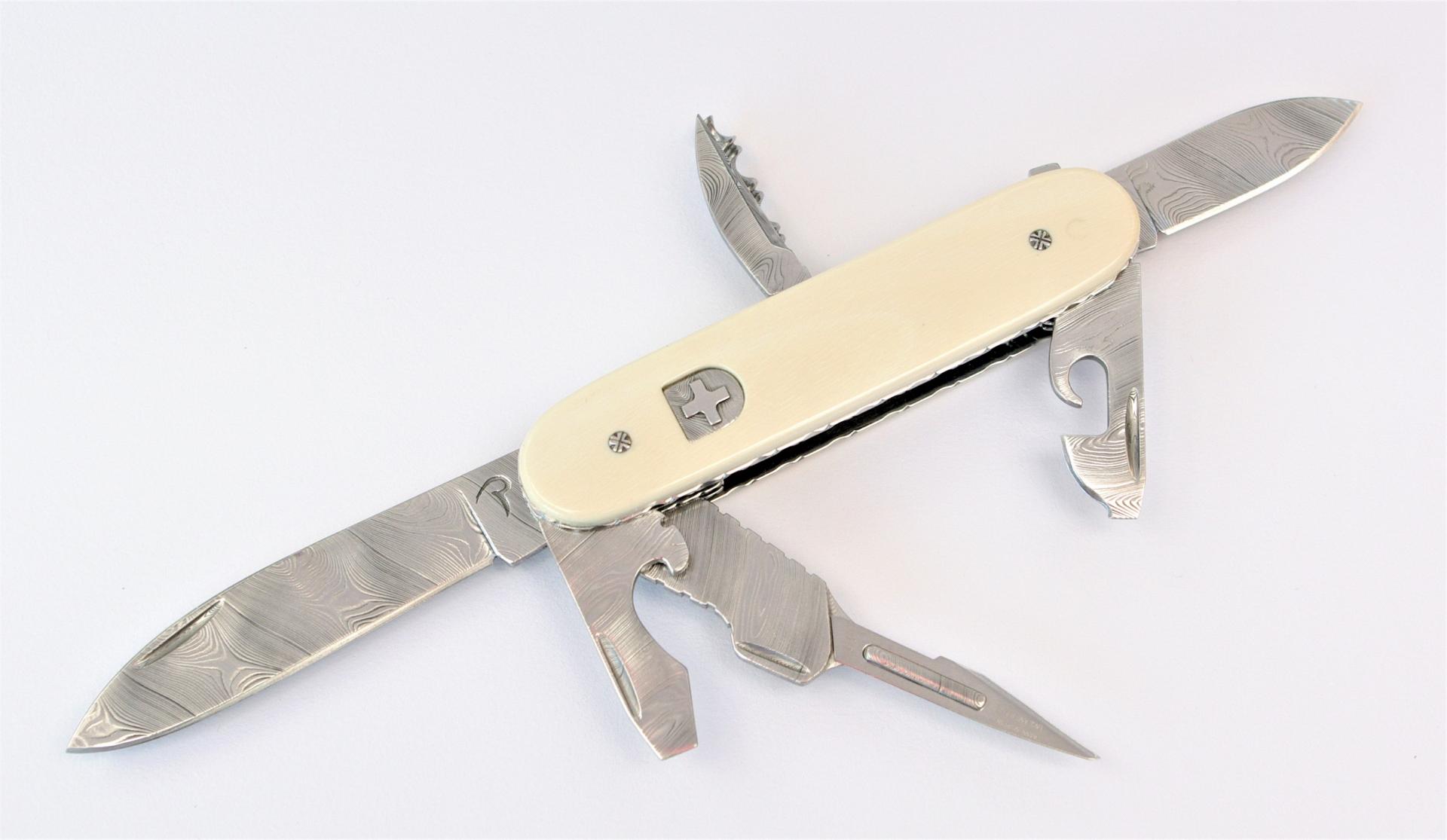 Swiss maker André Perret’s simply named his version of a Swiss army knife ‘Nr. 317’. The blades are
Damasteel, the handle scales are Mammoth. Especially notable is the removable scalpel. 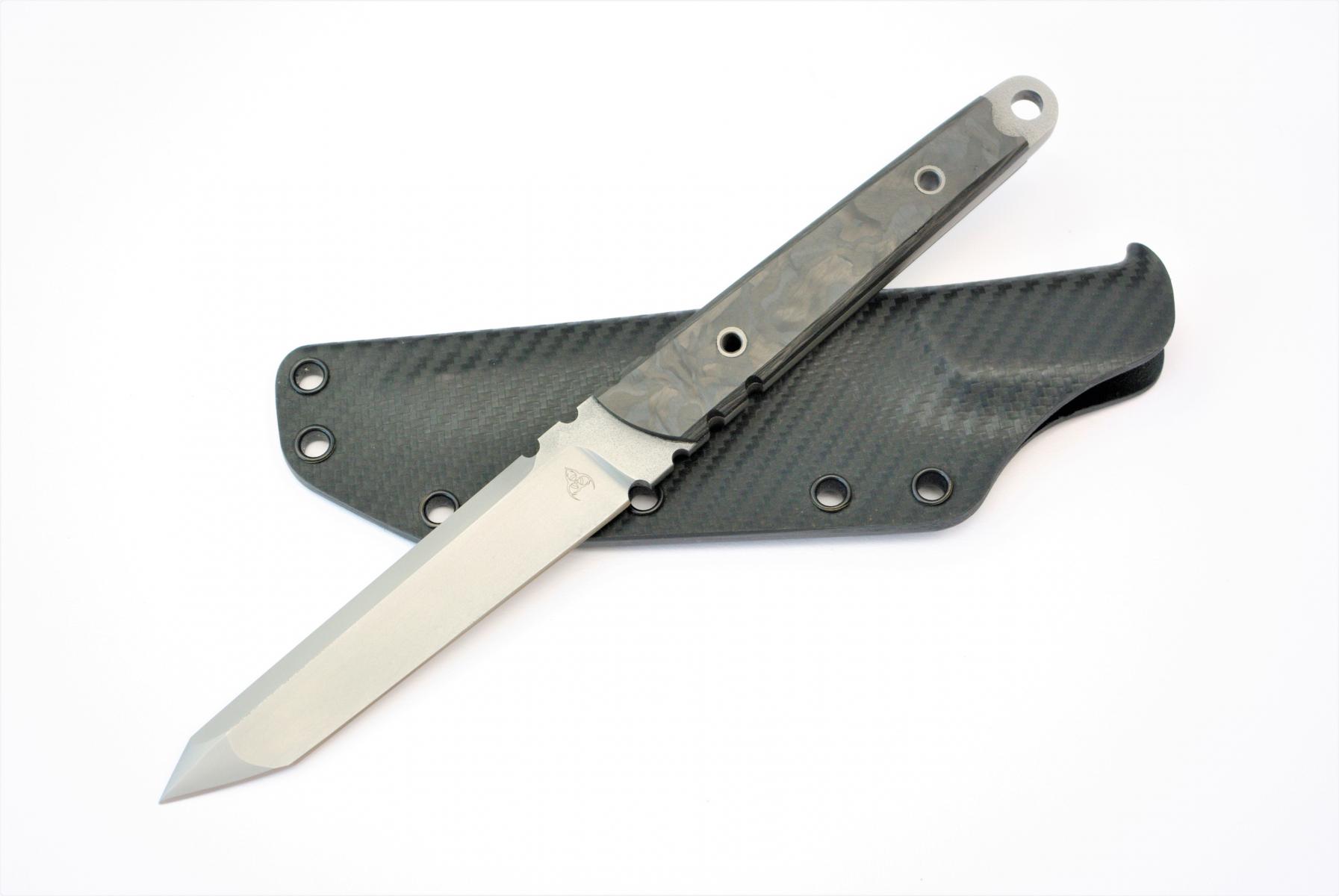 The ‘Nekya # 50’ by Andy Goltz (Apeiron Bladeworks). The 12 cm blade with a battleship tip is made from
N690Co. The handles are marbled Carbon fibre. 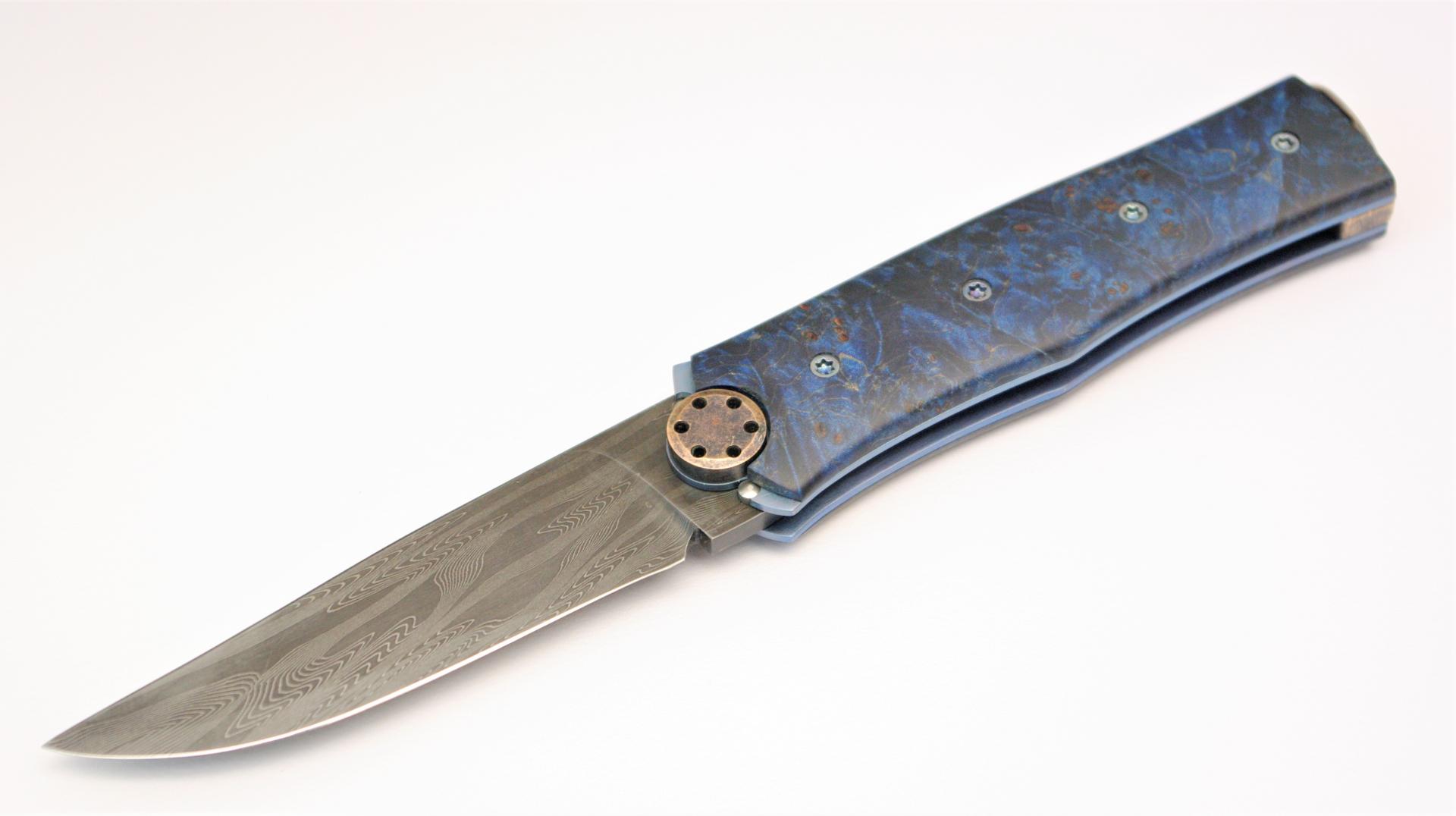 The Round Swing Folder by Armin Drumm. The name of the knife refers to the folding mechanism, which
allows the blade and handles to rotate 360 degrees. The blade is 1.2842 and 75Ni8 Damascus, the handles
are blue stabilized Maple. The unfolded length is 18 cm. 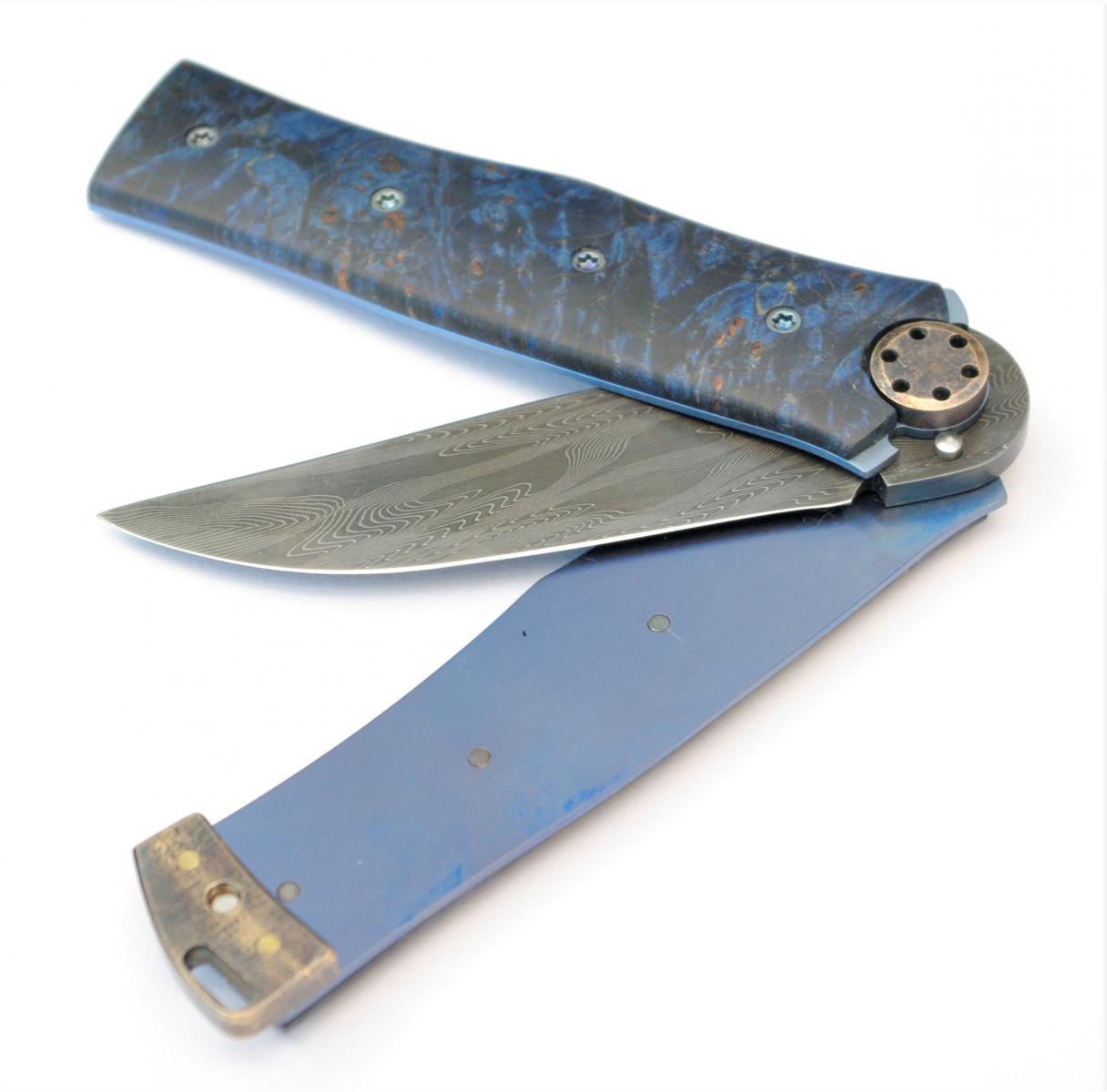 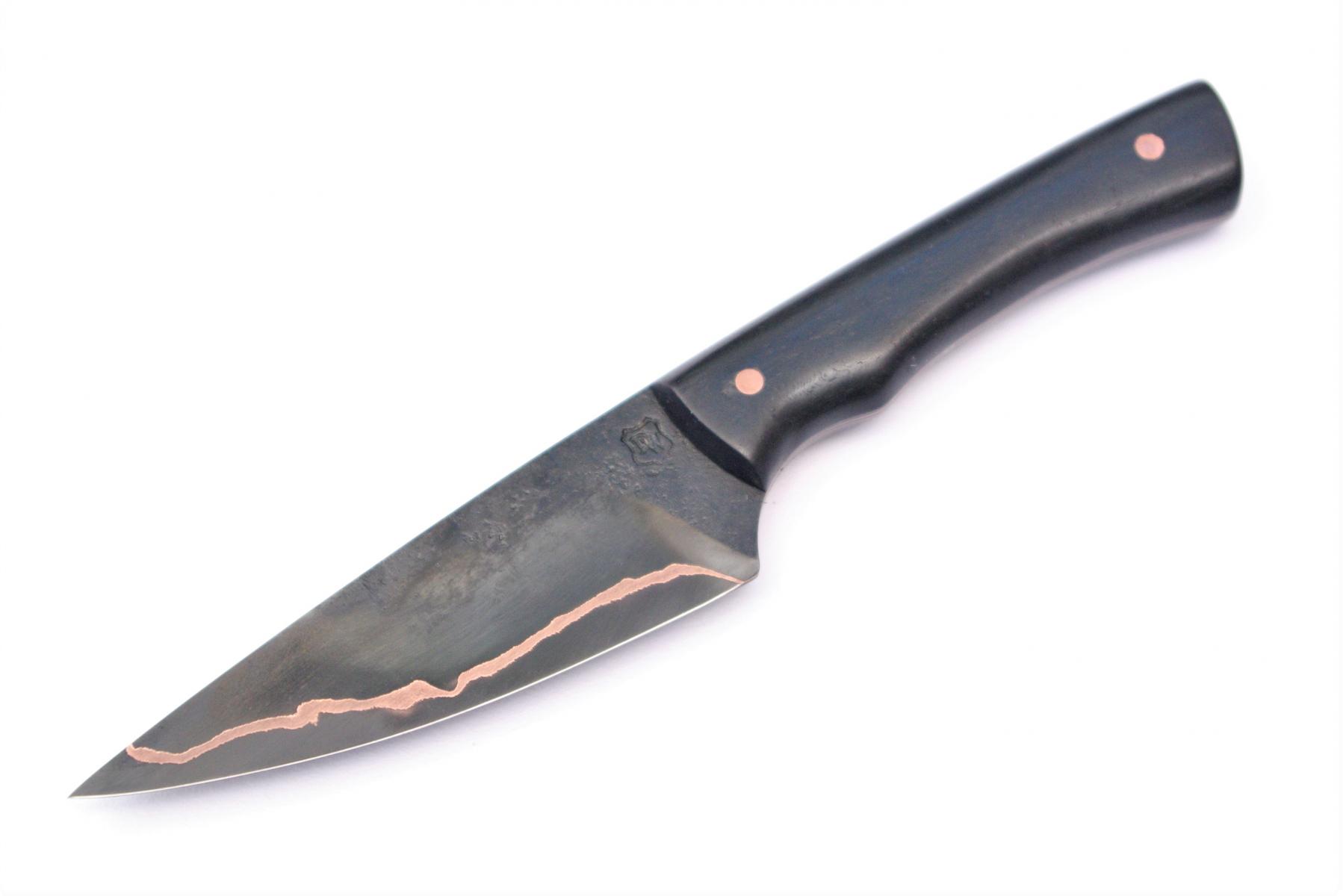 The blade of this knife by Austrian David Wolkerstorfer is made from forge welded O2 steel and Copper,
which gives the impression of a very bright hamon. The handle is Ebony, fastened with copper pins. 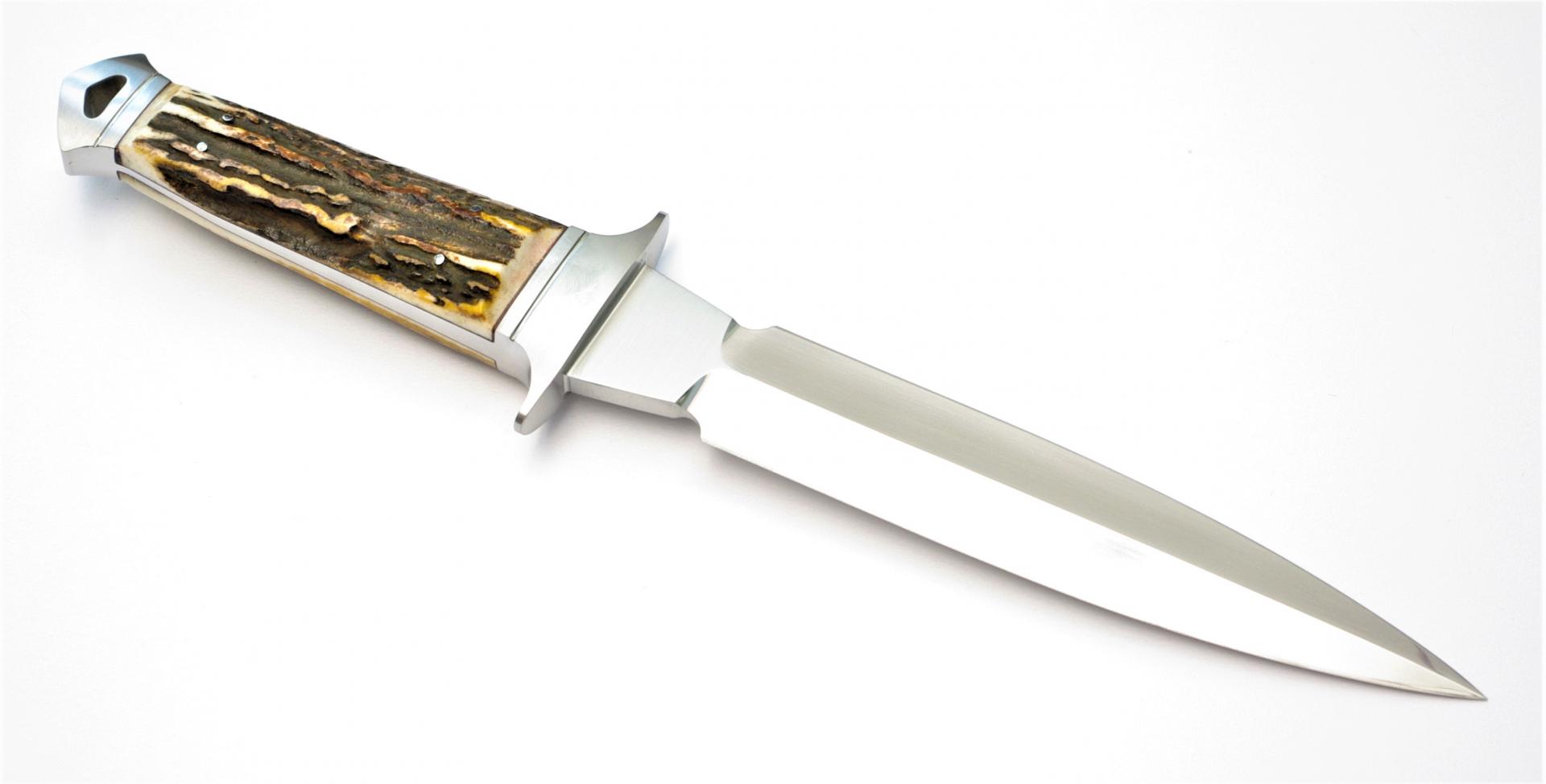 Dietmar Kressler is one of the living legends in the world of blade makers, and one of the first members of
the Olching Knife Working Group. He showed this Kressler & Lake collaboration, made with Ron Lake.
The dagger is from LC200 N steel with Dear antler handle scales. The overall length is 300 mm. 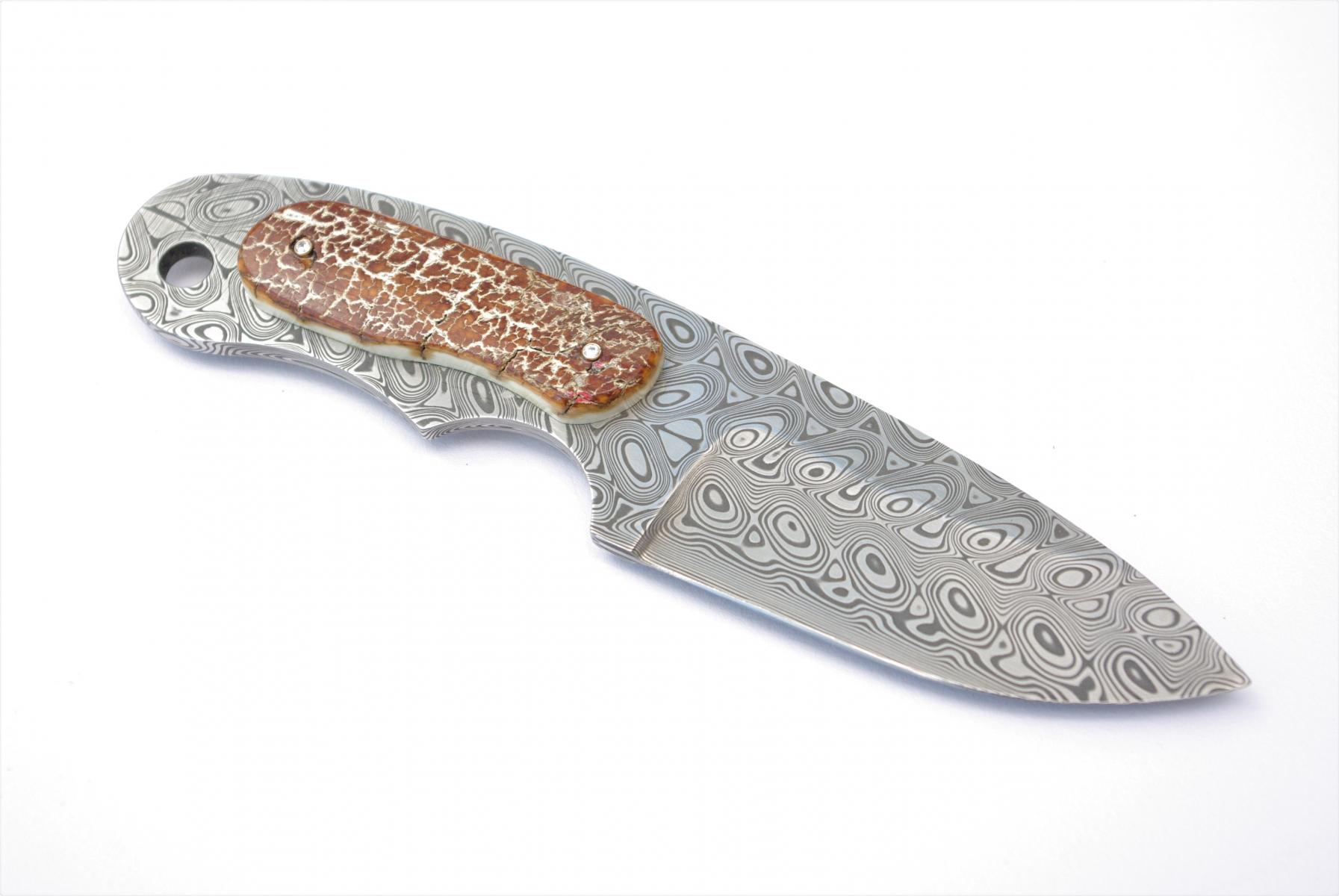 Ernst Siebeneicher-Hellwig, organiser of the show, presented this intriguing little knife made from Damasteel
with Mammoth scales. The pinheads have small Zirconia’s. 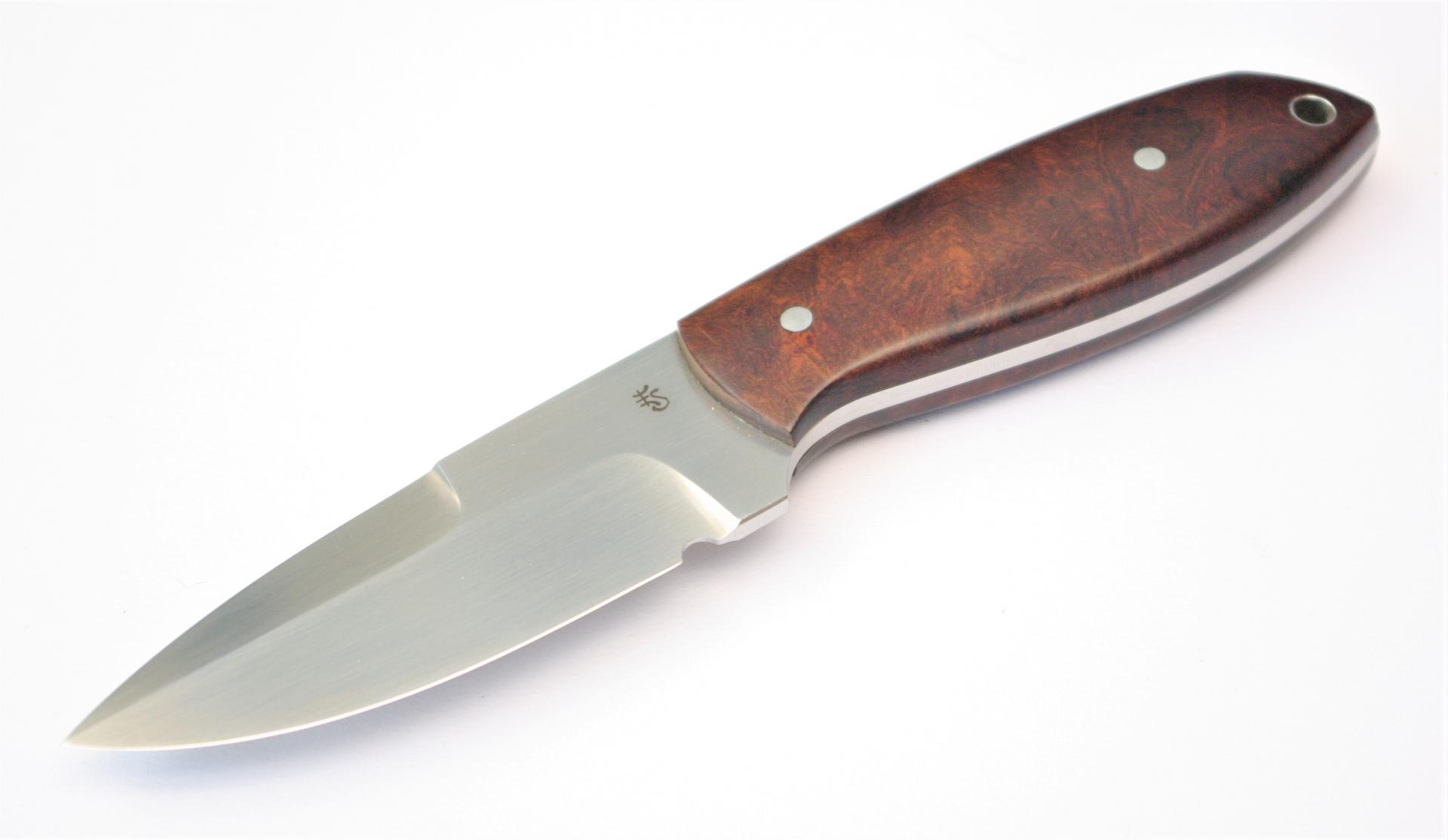 An elegant fixed blade by Erwin Schneller. The steel is RWL34 the scales are Desert Ironwood. 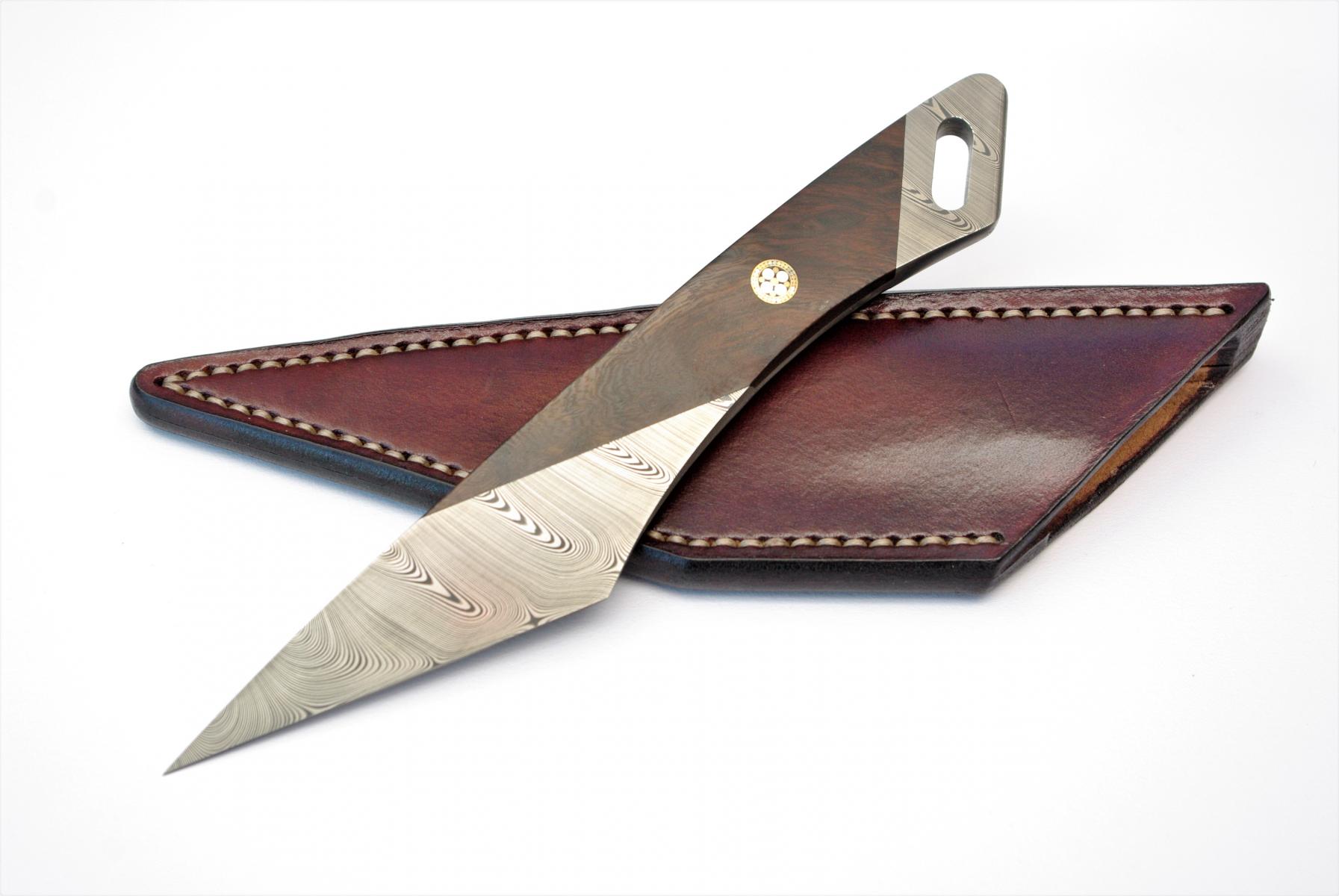 An integral Kiridashi by Frank Funke. The 17 cm knife is made from Damasteel, with Desert Ironwood
handle scales.

This Bowie-like knife by Florian Trinkl is made from Niolox + steel with a V2A stainless steel handguard
and Desert Ironwood handle.

The unmistaken style of Gunther Löbach (ScorpioDesign) clearly shows in this ‘Apocalyps IX’. The 28 cm
knife is made from hand forged Damask (1.2842 and 75Ni8) and has a handle from Reindeer horn and
stainless steel.

A fixed blade by G.G. Hartmann. The blade is powder
metallurgical Damask, the handle is Ivory. 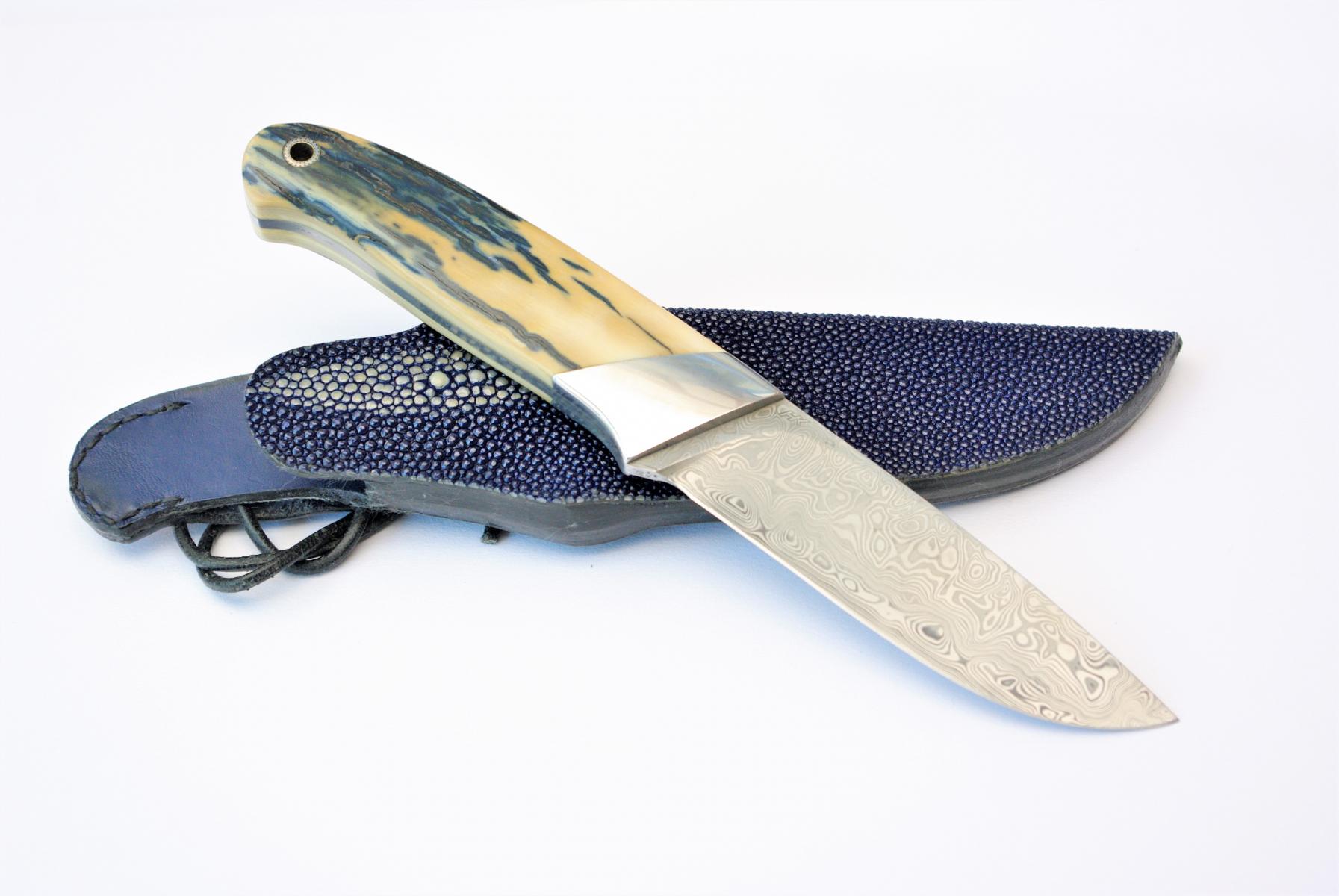 Helmut Klein made this hunting knife, with a blade from Balbach-Damask and blue Mammoth-ivory handle
scales. The sheath is Pearl Ray skin. The overall length of the knife is 210 mm. 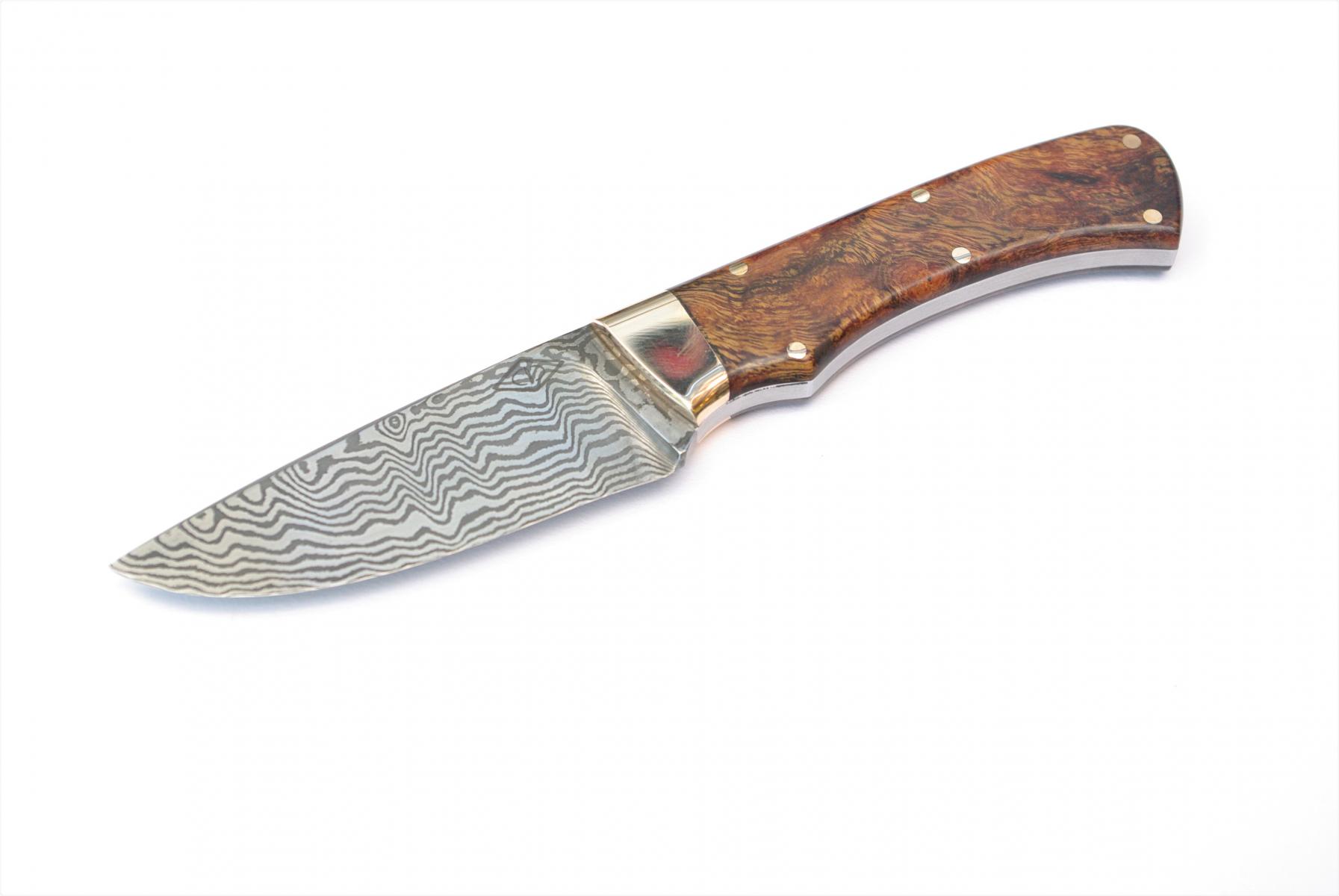 Jerome Binder works under the name JeronimoKnives. This ‘Chief’ has a David Wolkerstorfer Damask blade,
Bronze bolsters and Desert Ironwood handle. The knife comes with a leather sheath. 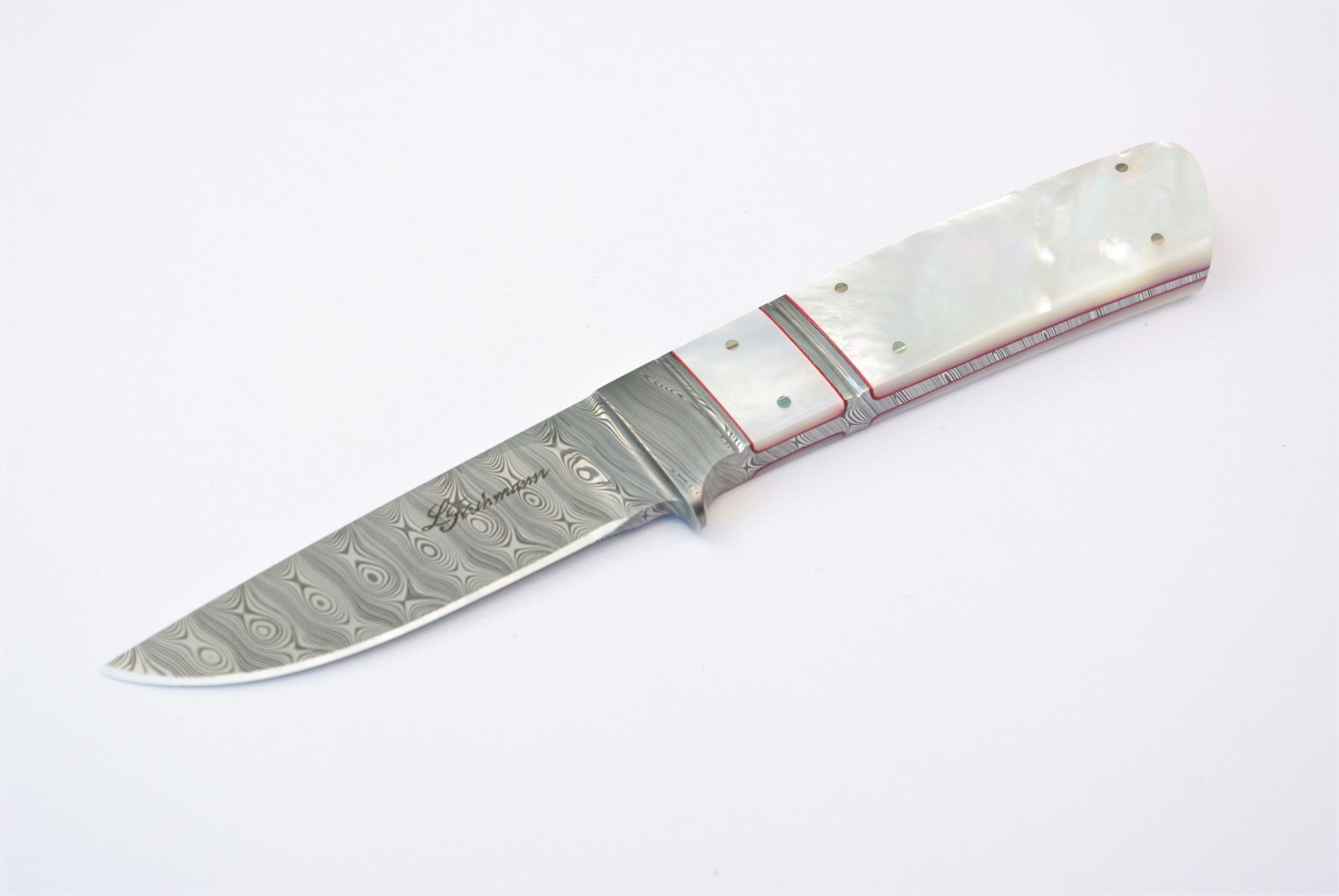 An fully integral knife by Ludwig Fruhmann. The knife is Damasteel with Mother-of-Pearl handle scales.
The overall length is 185 mm. 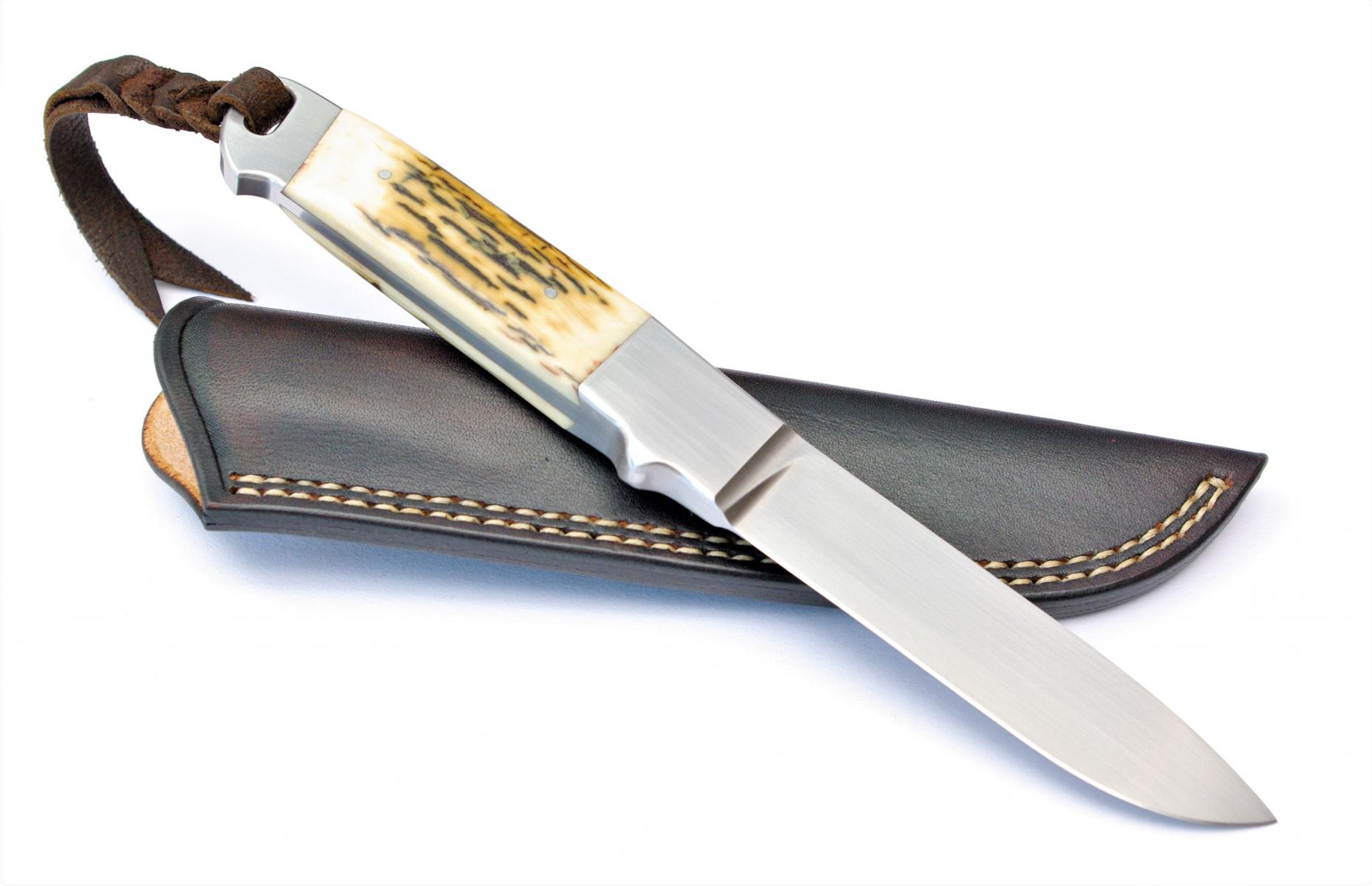 A very elegant hunting knife by Manfred Rieger. The steel is UHB Elmax, the handles are Mammoth ivory. 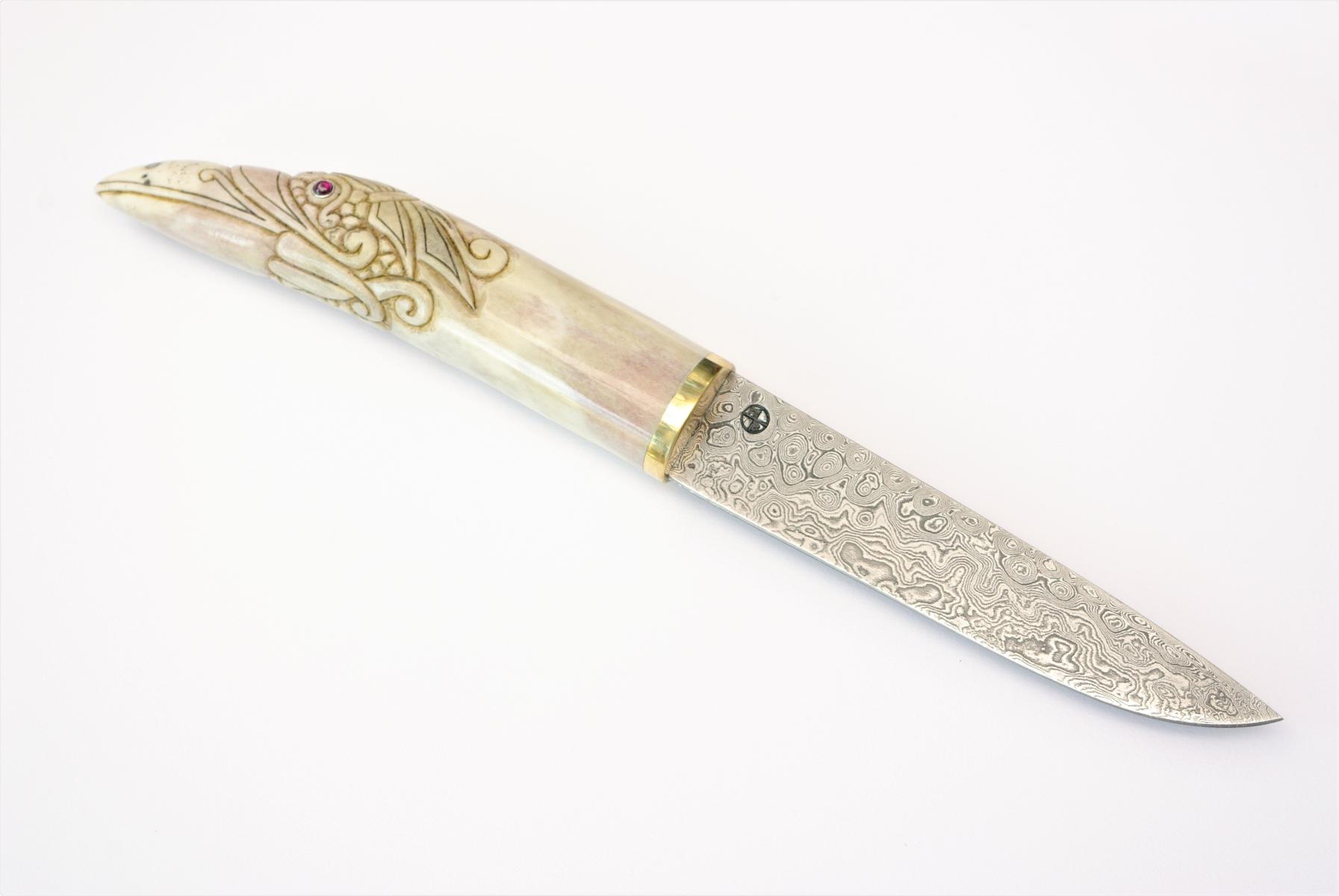 Matthias Barkmann (Vikinger-Kontor) made this knife with a blade of 135 layers of Damask, combining
ball bearing steel, and steel from the gun barrel of a Leopard I tank. The handle (below), shaped like a
Ravens head, is from Deer antler with details in Silver and Garnet. 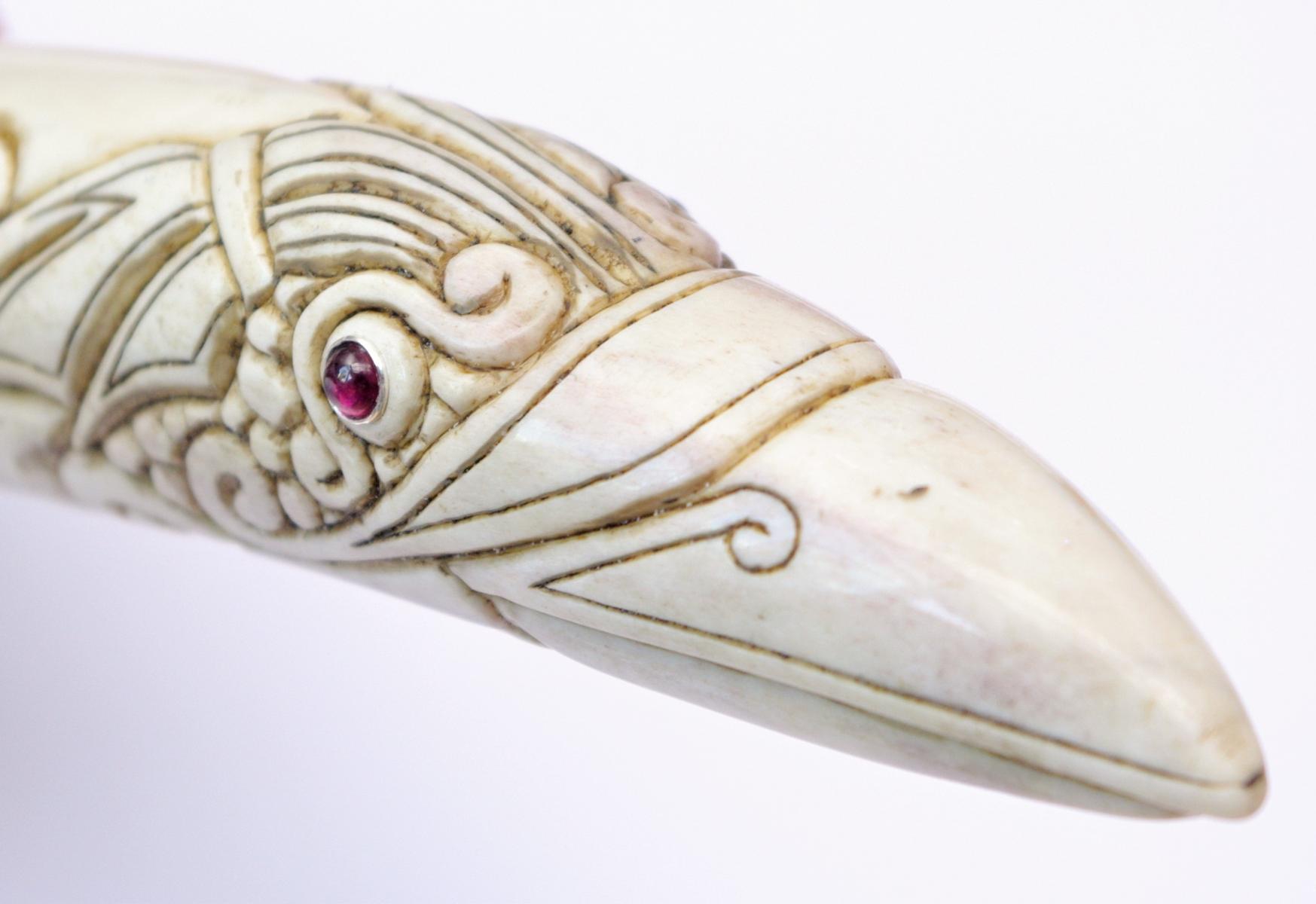 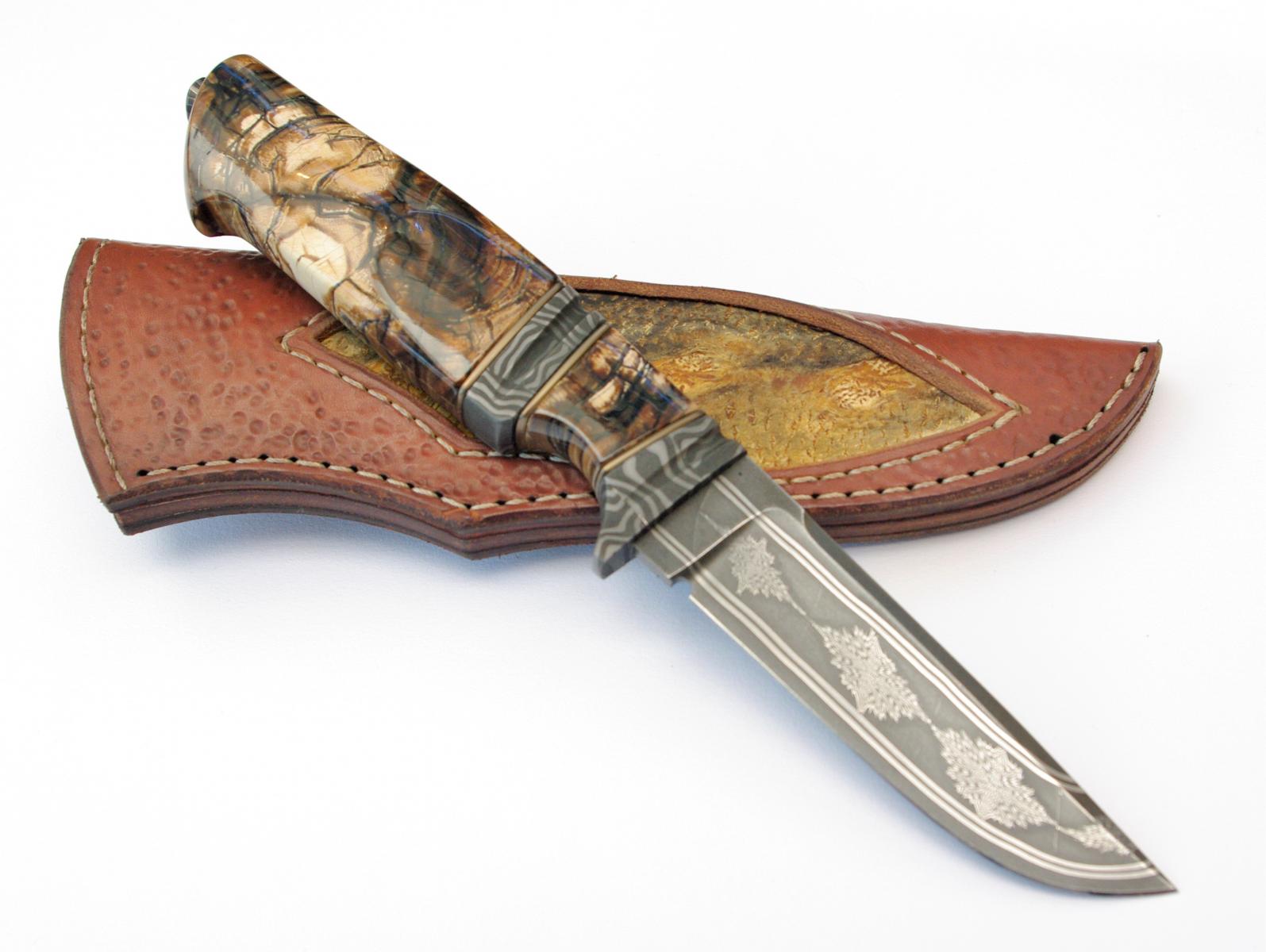 A spectacular combination of materials in this fixed blade by Patrick Teyko. The blade is mosaic Damask
from Uwe Heieck, the  handle material is Mammoth.

A hunting knife from Paul Mezösi. The blade is Balbach Damask, the bolsters are Mokumé and the handle
scales are Bison bone. 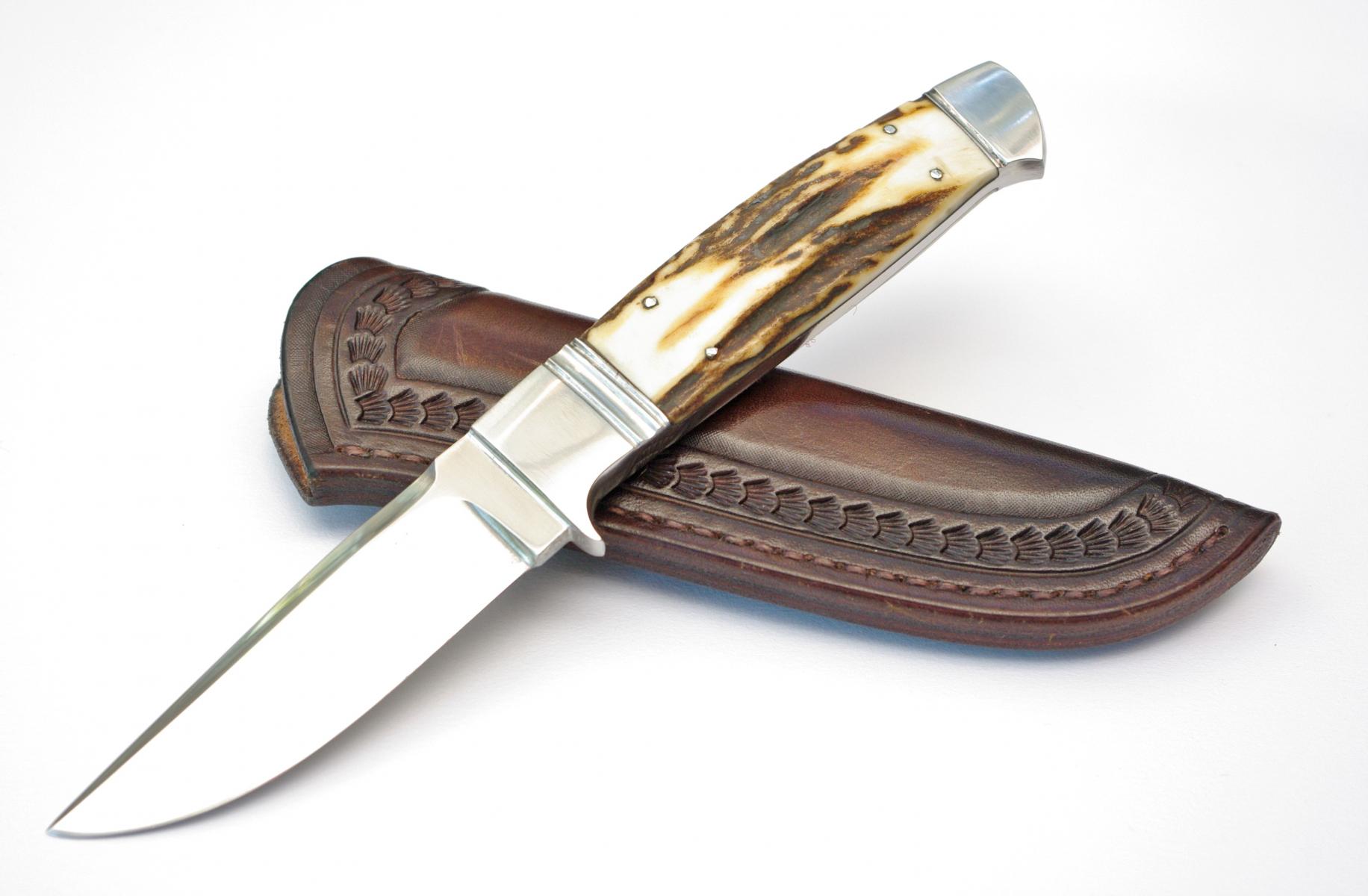 A full integral hunter by Peter Huber. The blade is CPM 420V (S90V) and the handles are Sambar stag. 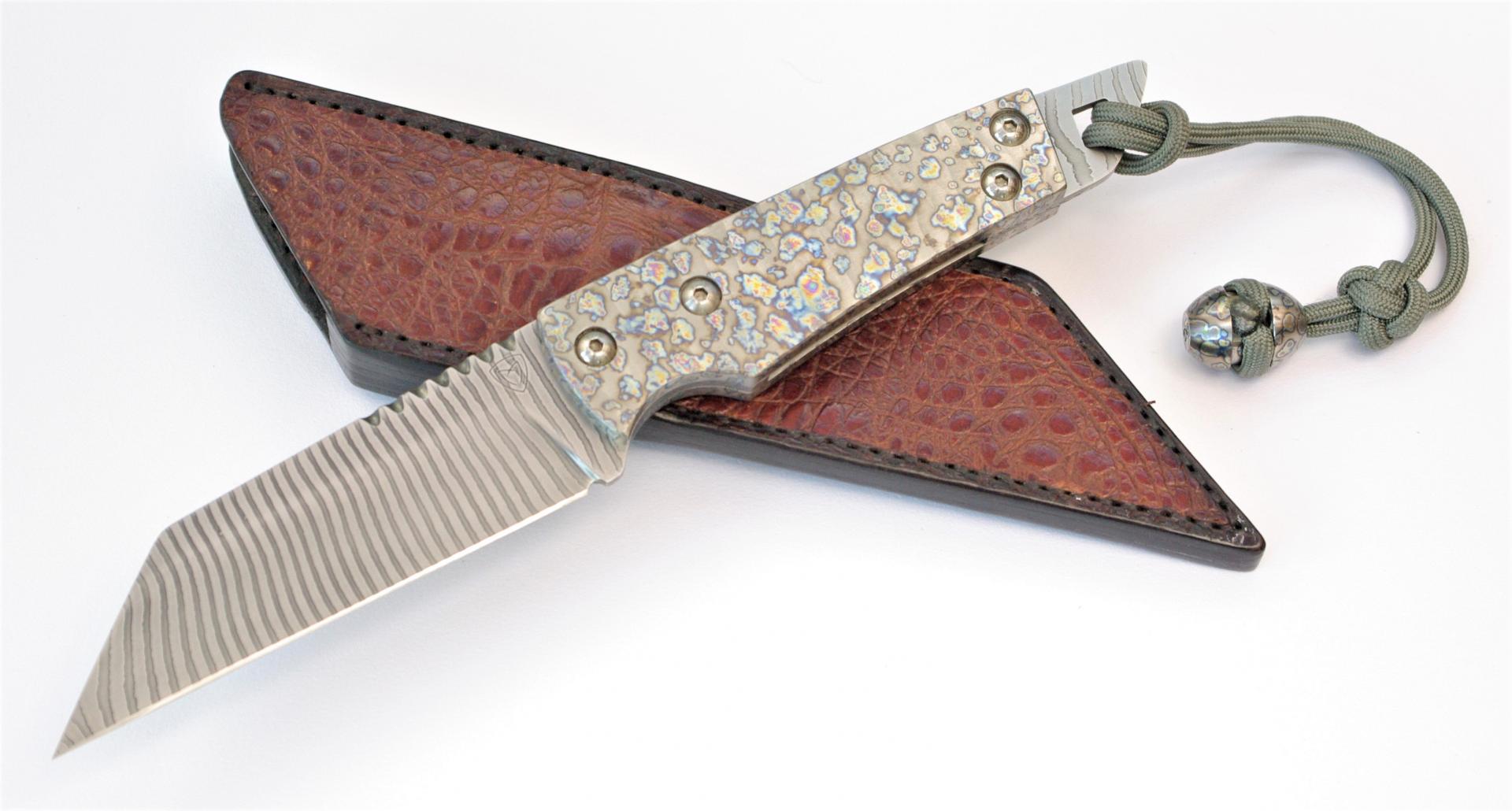 Steffen Munzert made this knife from Balbach DSCinox Masame, with handles from Titanium anodized by
Ray Wenning. The sheath is crocodile leather. 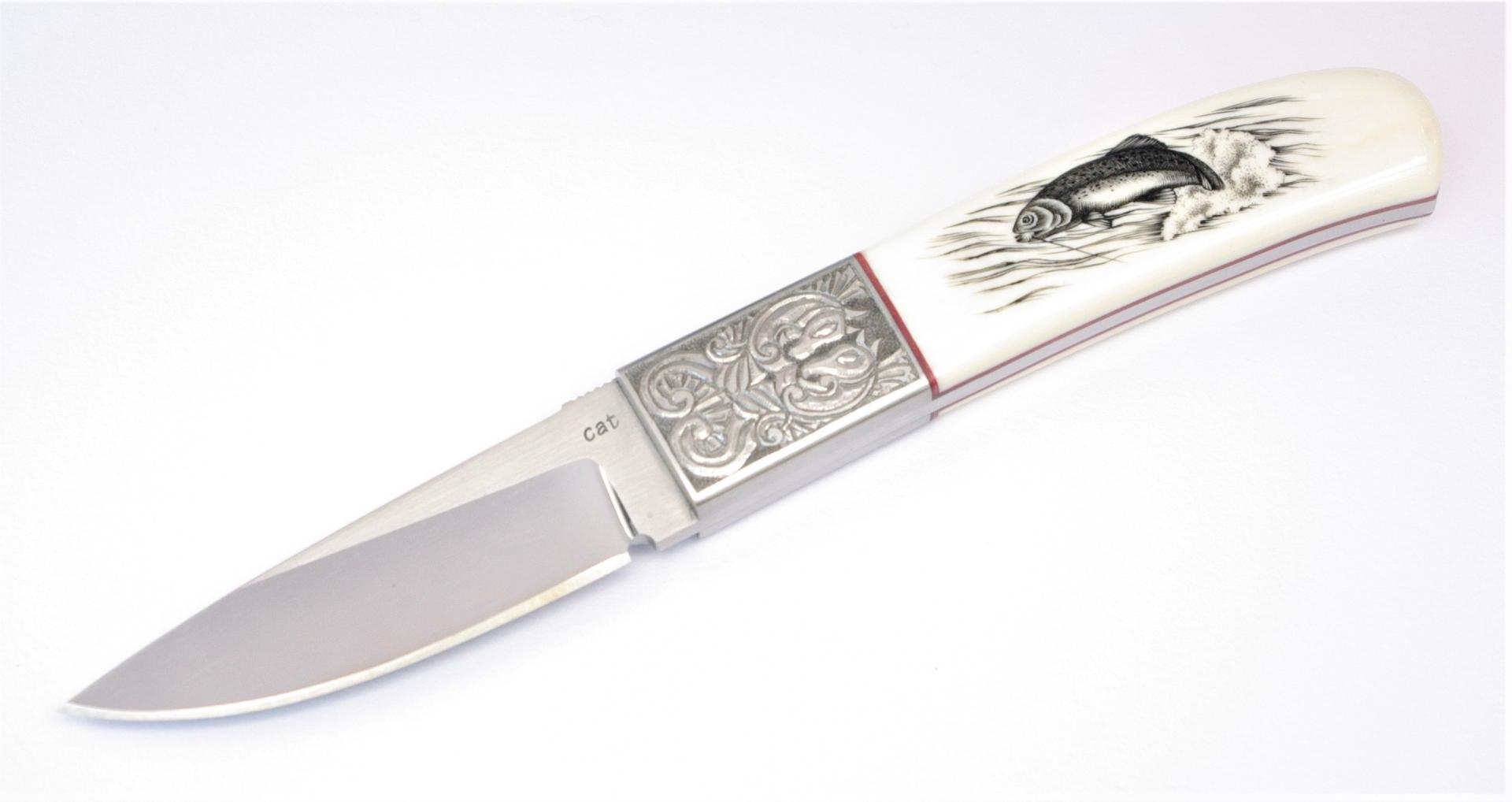 Italian knife maker Carlo Alberto Trevisi named this the ‘A.PLUS 4.44’. The steel is AISI N20 C, with a
chisel engraved bolster in the shape of two sea horses. The handle material is Ivory. The length of the knife
is 166 mm. 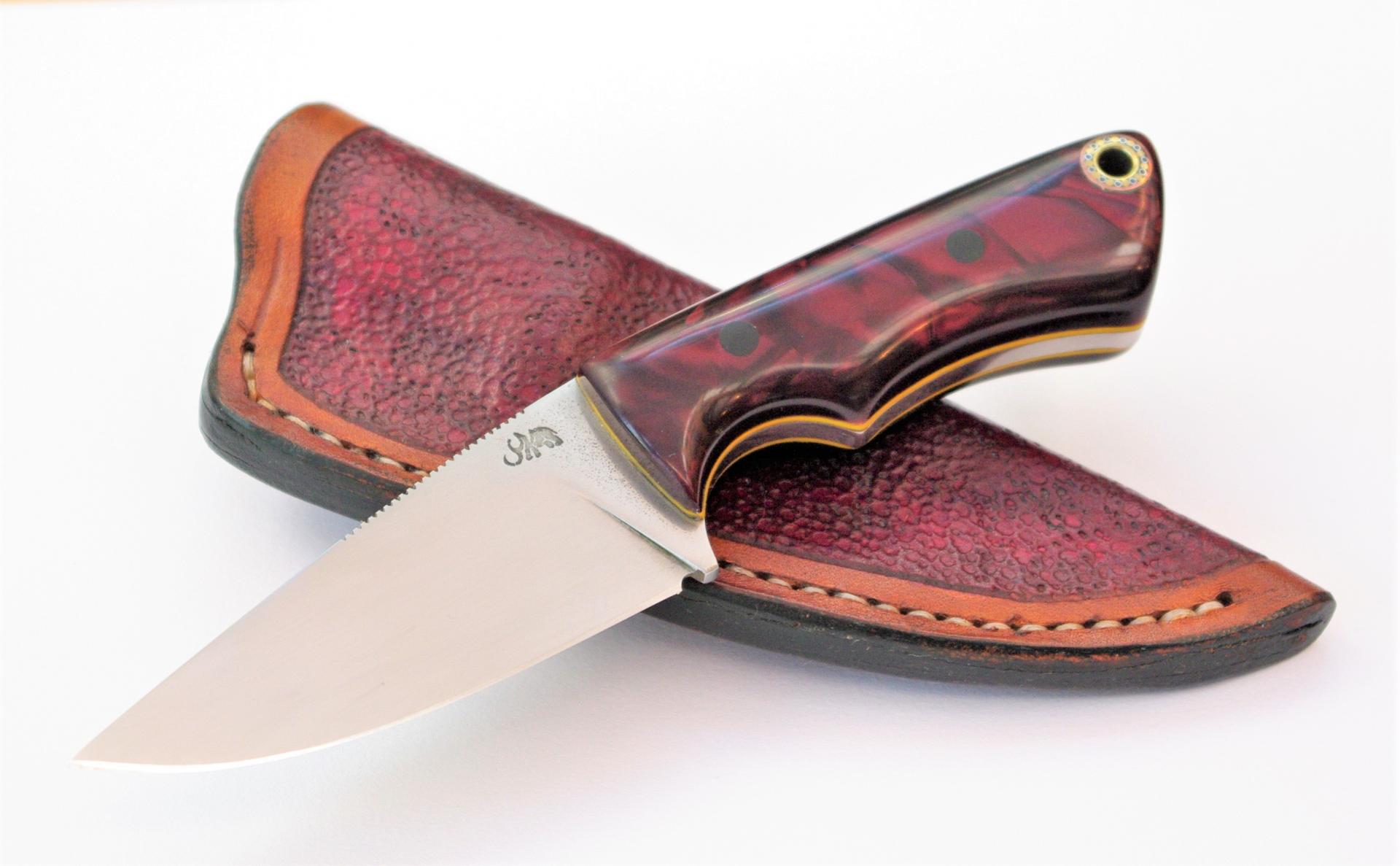 A sturdy ‘three finger knife’ by Yannick Kornprobst. The blade is N690 Böhler steel, the handle is tortoise. 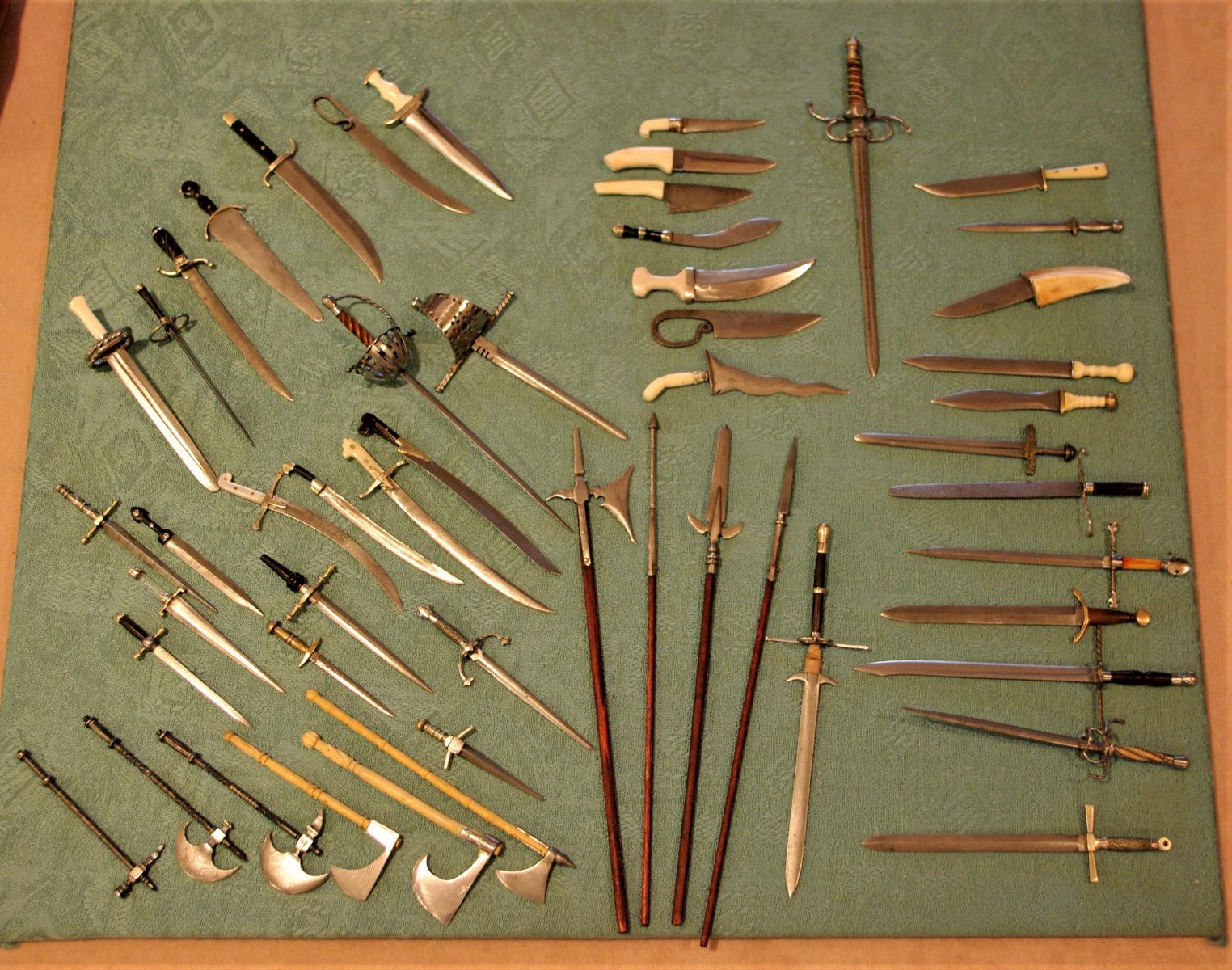 Wolfgang Schlag does not need a large showcase – he makes miniatures. All are based on existing historical specimens of knives, daggers, swords, axes and halberds.
Below: A miniature left-hand dagger by Wolfgang Schlag. His miniatures are made according to the full-size models,
in this case with a wooden handle with a metal wire winding. The blade is Damask. The coin gives an idea of
the size. 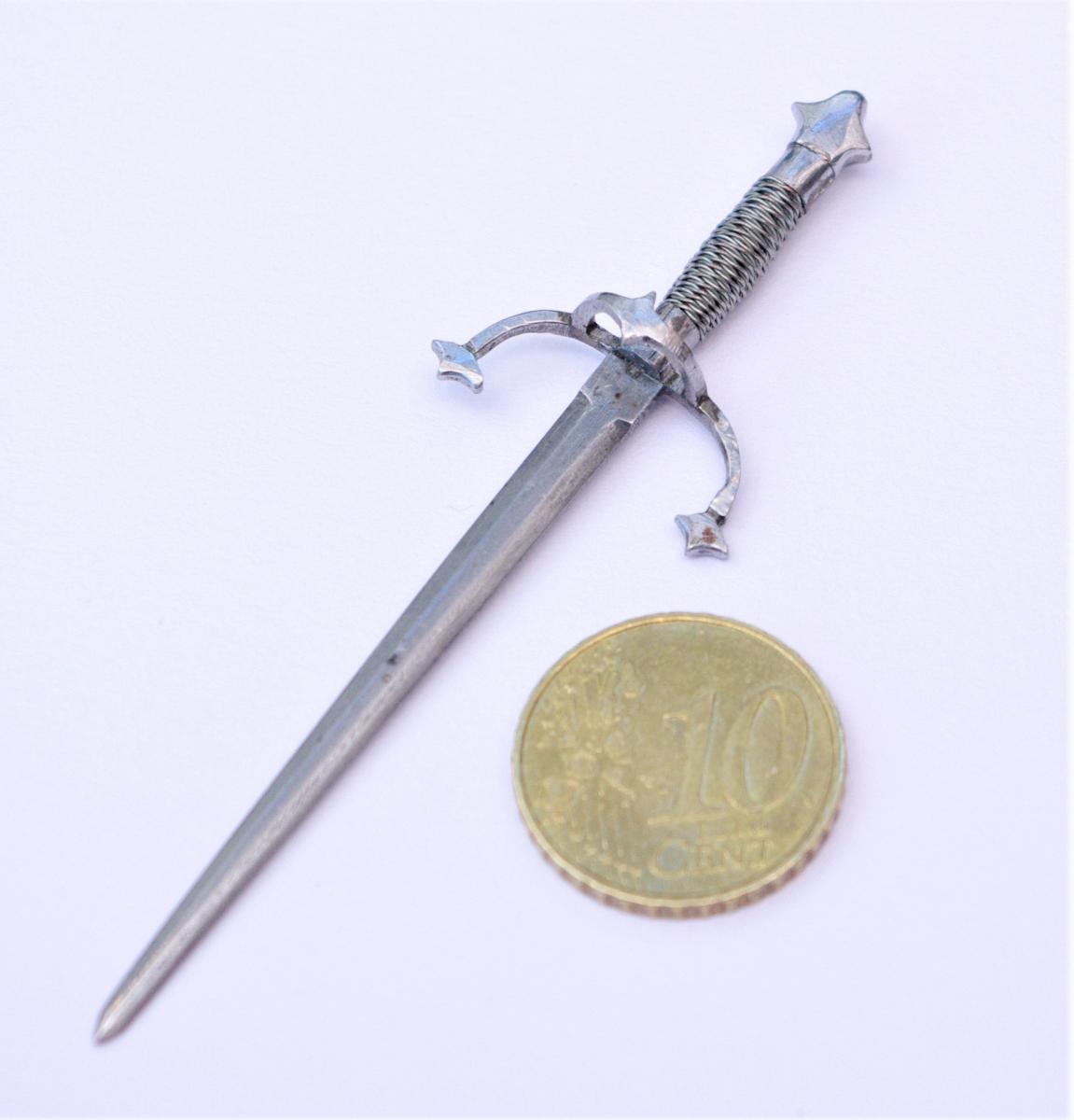