In 1957, Richard Bros. & Sons Limited and Paul Richartz, both of Moore Street, Sheffield, Great Britain, applied for a patent on a “novel form of ornamental handle covering” for pocket knives.

Looks matter; any custom knife maker can tell you that. Your knife can be technically flawless and brilliantly executed, but most of the time, it’s the looks that tip the scale.
British patent 822,850, granted in 1959, is unusual in that it describes a way to make a knife look more appealing: “a novel form of ornamental handle covering”, applicable to folding pocket knives in which the blade (or blades) pivot between metal liners to which the handle scales are attached.
Each handle scale was provided with two rectangular recesses (19 and 20 in the drawings) in which alternate rectangular sheets of paper were placed. These sheets were printed with parallel strips in different patterns or colours. Figure 6, for example, shows
a pattern with a darkened portion 22 along the upper end and light portion 23 at the lower ends. A ribbed transparent plate was placed above each paper sheet, with the ribs outermost.
The pitch of the ribs was the same as the pitch of the strips on the paper. The combination gave the effect of a prism or a lens: tilting the knife would make different ornamentations visible. In Figure 1, for example, the darkened upper portions of one pattern appear on the left and the darkened lower portion of the other pattern on the right.
Through modern eyes, the idea seems silly compared to Mammoth Ivory, stabilised wood or Carbon Fibre. But don’t forget: these were the nineteen fifties. A pocket knife with such ornamental scales must have been the envy of many boys. 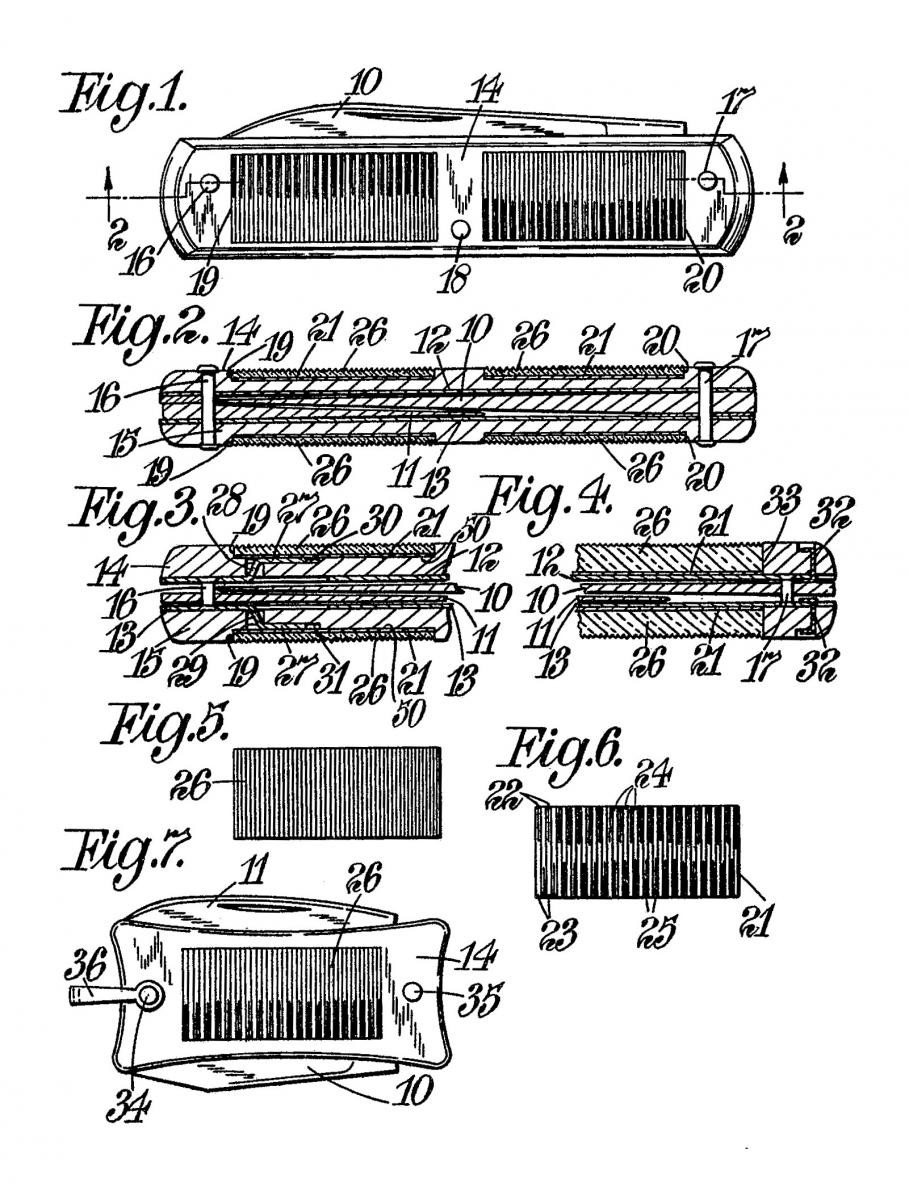 The drawings from British patent 822.850. Figure 1 shows a side view of a double-bladed pocket
knife with the ornamented handle scales. Figures 2, 3 and 4 show different methods of attaching
the scales to the liners. Figure 5 is a face view of one of the ribbed transparent scales and
Figure 6 an example of the underlying ornamental sheet. Figure 7 is an alternative double bladed
knife embodying the invention. The ribs are shaped to provide the optical effect of prisms or lenses,
so that by tilting the knife in relation to the eye different ornamentations become visible.
Our sponsors
Advertisements
Dit is een geprinte versie van de publicatie op