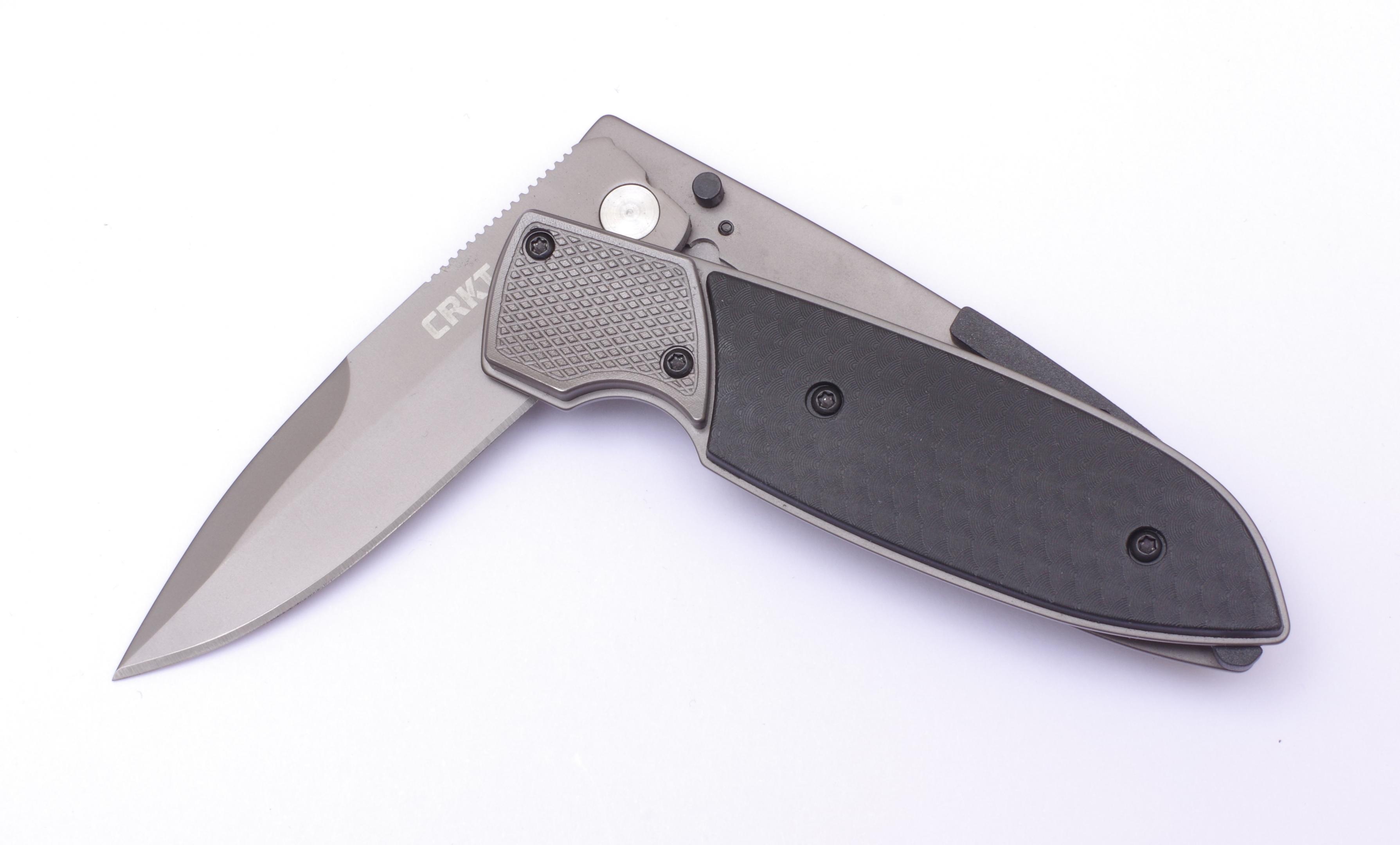 The Fulcrum 2, opened halfway. As can be seen, the left handle hinges downwards.
If it is pushed up again, the blade opens further.
Operation
The fun part of the Fulcrum lies in the fact that hardly anyone can open the knife without an explanation. The blade has no thumb rest, no flipper or nail groove. It protrudes slightly from the handle at the level of the liner lock, but that piece hardly offers any grip. Moreover, you can pull it all you want, but it will not open. So how does it work?
On the left-hand side of the blade of the Fulcrum, next to the hinge axis, is a sturdy pin. This pin falls into a specially shaped guide slot in the left liner. This slot is not normally visible as it is covered by a metal bolster plate.
The left liner (including nylon grip and bolster plate) can be hinged, with the hinge point at the back. When the left grip half is pushed down, it forces the pin along. The shape of the guide slot causes the blade to hinge open partially, at an angle of approx. 55 degrees. If the left-hand side is then pushed up again, the blade opens completely. The knife is now locked by the liner lock in the right-hand handle.
Closing takes place in the familiar way: when the liner is pushed aside, the blade can be closed by hand. The pin again follows the guide slot in the liner. When closing, the left-hand side of the handle first moves down and then up again. 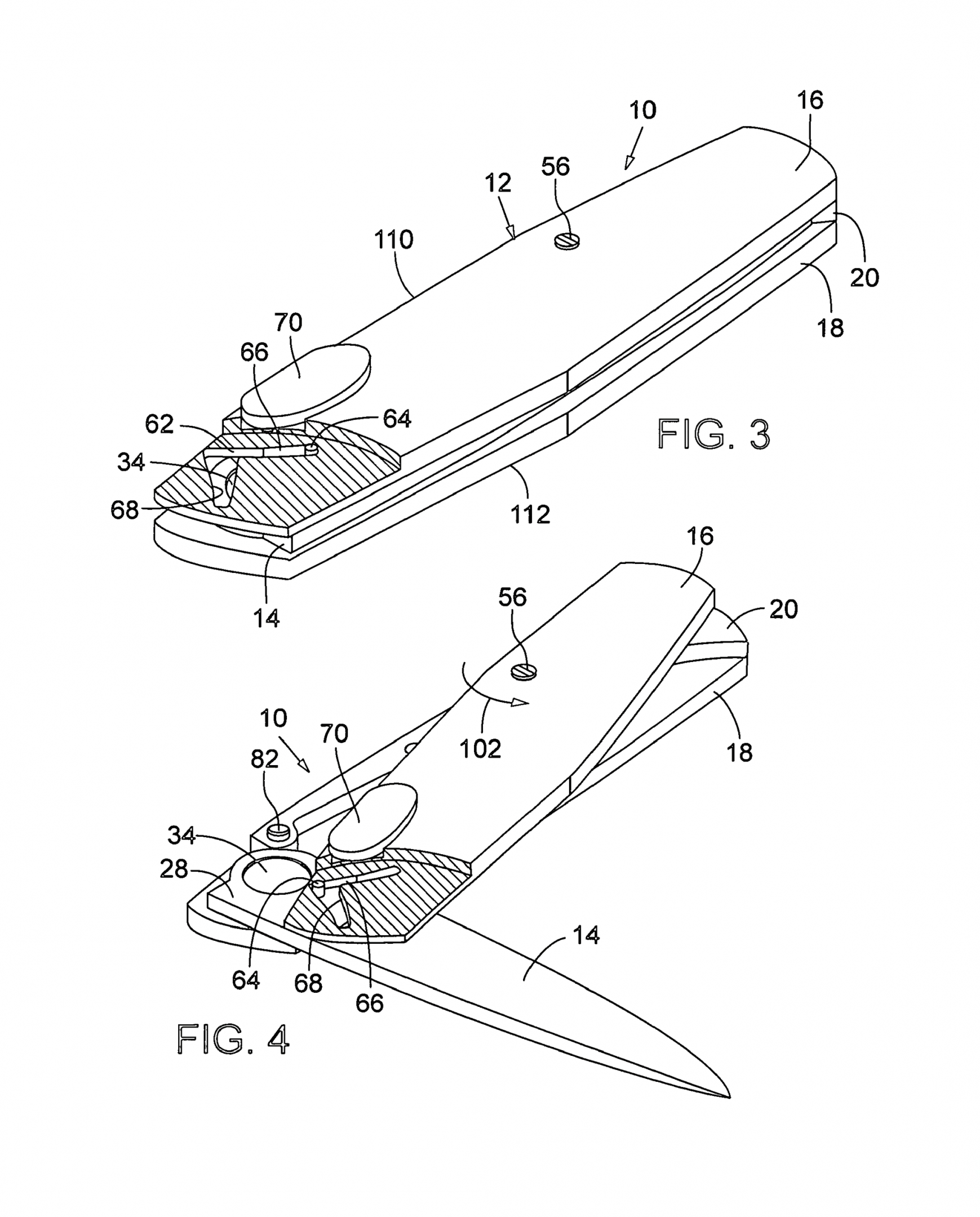 Two drawings from Charles Kain's patent, issued in 2009. Here the principle of his mechanism is shown.
The shape of the guide slot is crucial in this construction. It must ensure that the blade can be opened smoothly and safely. A lot of thought went into this. One of the most important things is the built-in safety. If the left-hand side of the handle is pushed in the wrong direction, the blade must not snap shut again. The secret is the small recess at the bottom of the right-hand side of the guide slot (see the arrow in the photo). It is a kind of safety net. If the blade does not open far enough during the first part of the movement, and if the user then pushes the handle back up again, the pin falls into this recess. It then acts as a stopper: the handle can no longer be raised. It can still be pulled down to open the blade further. At the end of the first stroke, the pin lies at the top of the guide slot. Here too it blocks the movement of the handle, which now cannot be lowered any further. If the handle is pushed up again, the blade opens fully.
The Fulcrum Action is an original idea, whether you want to call it a locking or an opening mechanism. It has one disadvantage: the pivot axis of the blade is only fastened to the right handle. The pin and guide slot are on the left-hand side and there is no room for anything else. Theoretically, this makes the knife more vulnerable. However, the pin is quite large so it is unlikely to give any problems. 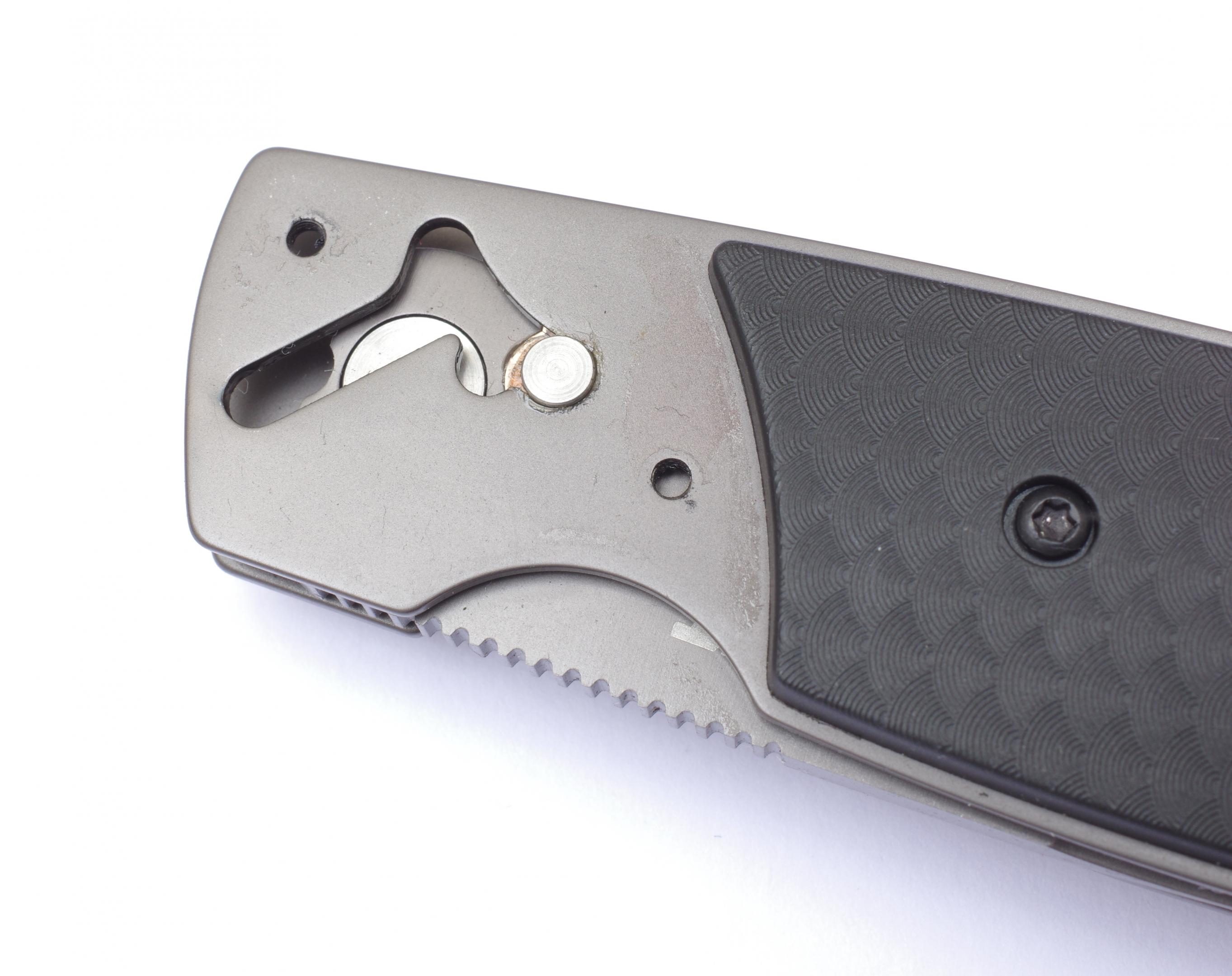 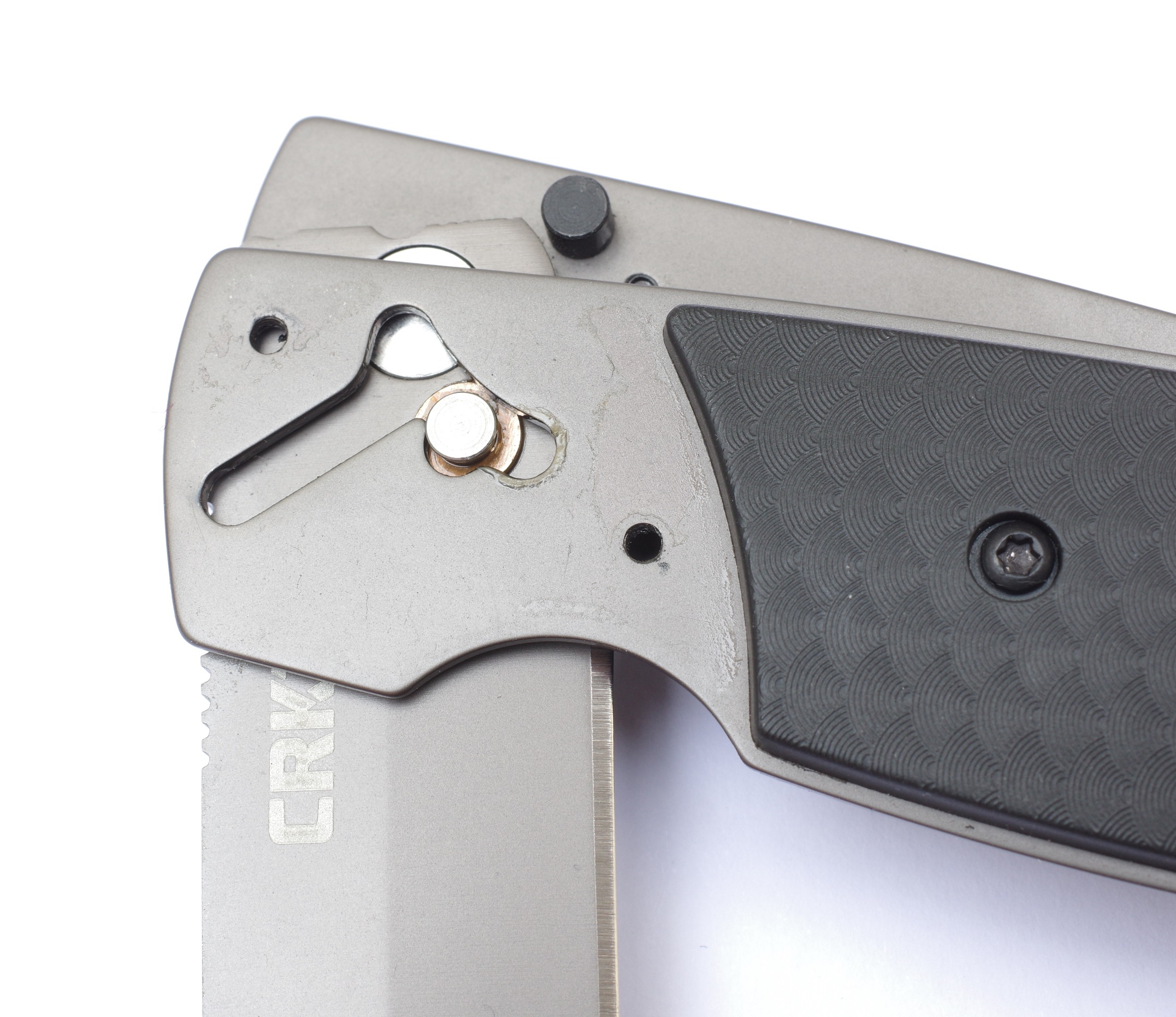 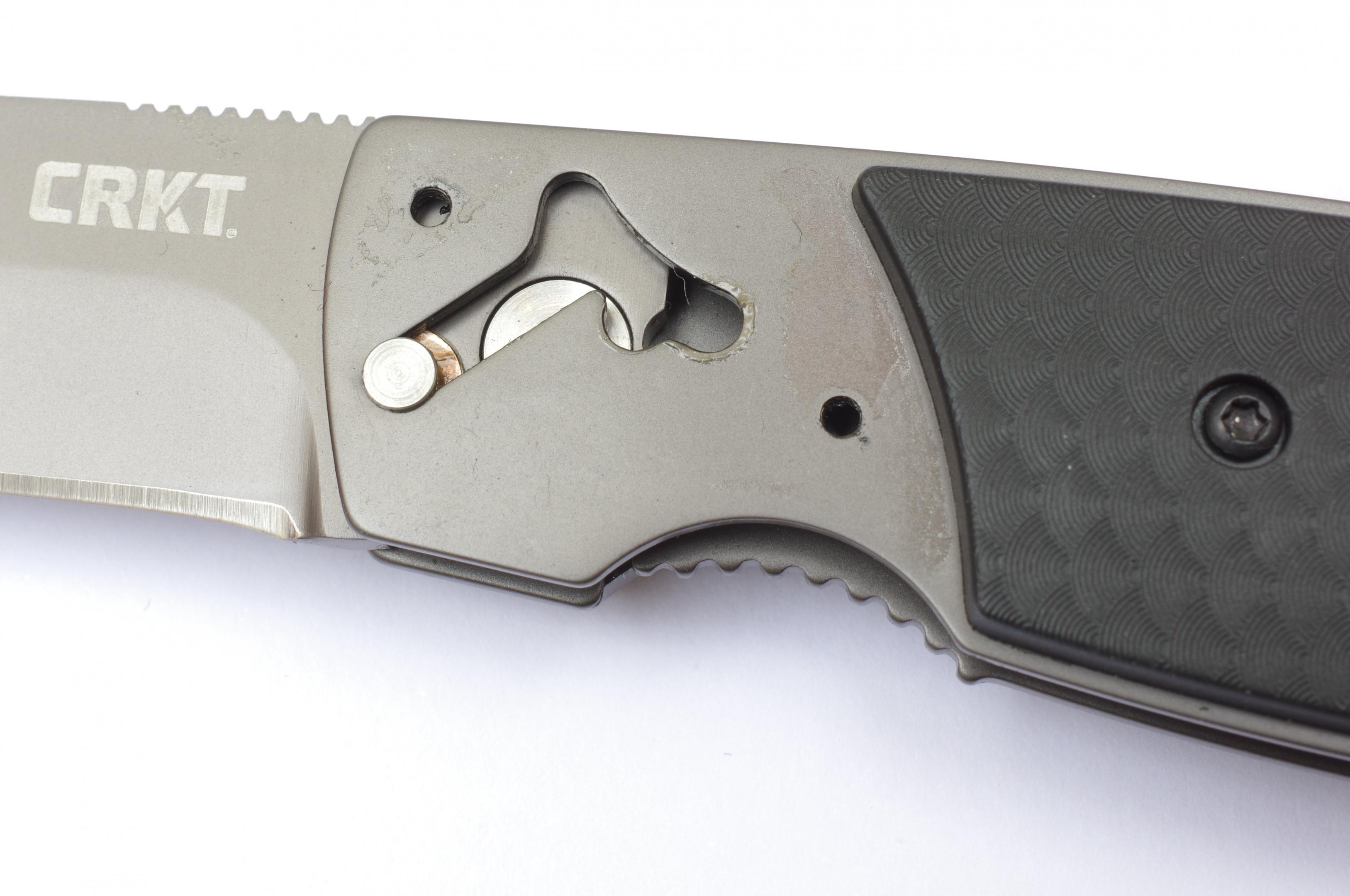 Close-up of the Fulcrum 2, with the bolster removed. The guide slot in the left liner forces the blade open.
Our sponsors
Advertisements
Dit is een geprinte versie van de publicatie op