Prague is not only the capital of the Czech Republic but a history-rich town. Since the days of emperor Charles IV in the 14th century, it has been the seat of kings and emperors; as such, it has grown in quality and size. Since the 14th century, Prague comprised of three, more or less, independent parts: Old Town (on the right bank of the Vltava river), Lesser Town (on the left bank of Vltava) and New Town (on the right bank, upstream from the two previous parts). Each of these parts has its own town hall. The New Town Hall was built in the north-eastern corner of the Karlovo square, which at one time was the largest square in Europe. The New Town hall was the venue for the 10th spring Prague Knife exhibition.

More than 50 (mostly Czech) knifemakers exhibited their craftmanship in the Large Hall and in the Common’s Dining Hall, accompanied by some 20 booths occupied by either suppliers of knifemaking materials or dealers in industrially manufactured knives. The organiser of this exhibition, Mr Zdeněk Janča – who is a highly esteemed knifemaker himself – has been involved with the organisation of exhibition since the very beginning. “We were three in the beginning, but as time passed by, my partners dropped out”, he says about the history of the exhibition. “It is a bit tiring to organize all administration and paperwork, you do not make much money from it – at the end after you pay all the taxes and rent and fees, you end up with a little black zero. But I believe that an event like this is a great opportunity to meet, talk and to share experiences. And, to motivate young or new knife makers and challenge them to tune up their skills.” 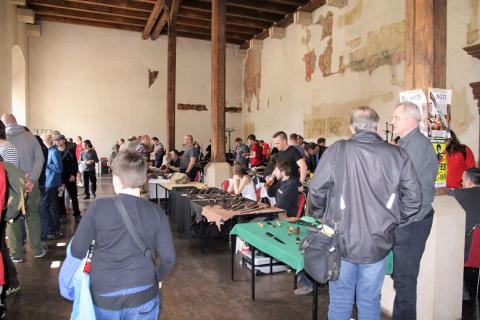 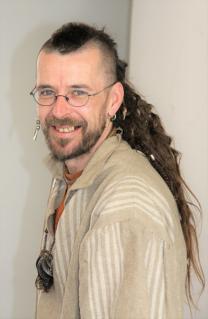 Left: The New Town Hall at Karlovo square was the venue of the 10th spring Prague Knife exhibition.
Right: The organizer of this exhibition, Mr Zdeněk Janča, who is a highly esteemed knifemaker himself.
When asked about his wishes, he says: “I would like to bring more knifemakers from abroad, especially from France, where I have plenty of good friends. The problem is that we are far away. Not only geographically but also economically. When I say that the table admission fee is about 30 Euros, it sounds like a joke, but when I say that a knife with a price of more than 250 Euros is not very likely to be sold, it turns into a bad and sad joke for them.”
The author of this report would like to add that while this might be true, if you combine the economic aspect of the participation in a knife exhibition with a two or three-day stay in one of Europe’s most magnificent cities, the invitation is worth a try. And there is another side to this exhibition – in Prague, and concerning Czech knife exhibitions in general, you can buy a very good knife at a very good price. And last but not least, the Czech Republic is still one of the few European countries where the beer is cheaper than gasoline. 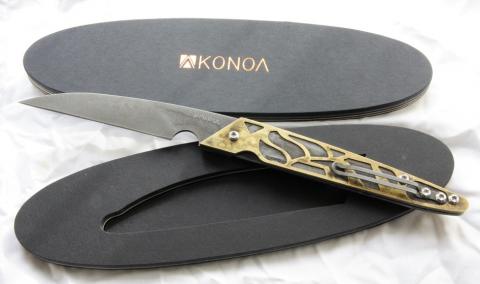 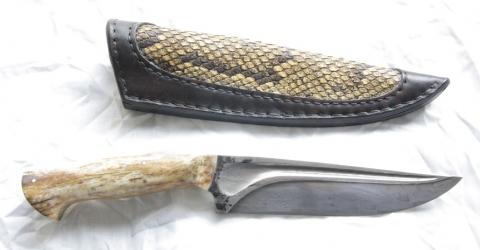 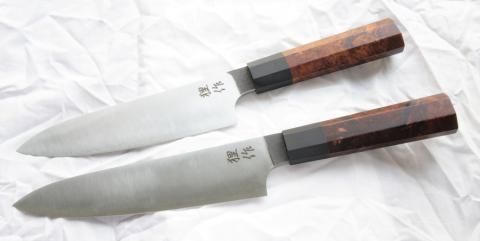 The ‘Perleťák’ (Abalone) folding knife by Radim Dachs, Jílovice, Czech Republic.
If we compare the Prague exhibition with the one in Brno only few weeks ago, the Prague exhibition is clearly less international in scope. The only foreign knife makers were from Slovakia and there were not many. In Prague, there is a considerably larger offer of blade steels, handle materials and other knifemaker supplies than in Brno. Maybe this is a reflection on the Czech passion and widespread doing-it-yourself hobby culture.
Some knifemakers were present in both Brno and Prague. The major difference was the presence of industrially manufactured knives. However, since the knifemakers exhibited their craftmanship in a different hall to the industry sponsored booths, this was not a noticeable annoyance. In Prague, I encountered more young faces behind the tables, some of them offering knives at a surprisingly high degree of craftsmanship. To name but one as a representative I would point out Jan Pomahač, whose Damascus blades and very accurate assembly of knives really caught my eye. But this is a highly individual preference and there were many others whom I’m certain would satisfy your preferences. Another exhibition in Prague is scheduled to be held in the autumn season.
European Blades Mag. will keep you informed. 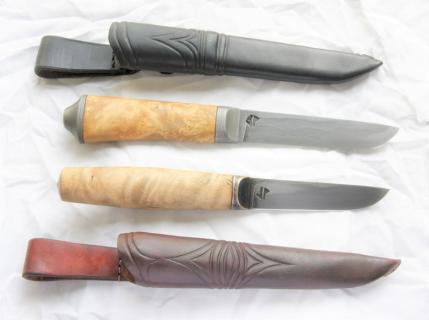 Left: Two fixed knives by Jakub Petráš, Skalica, Slovakia, made from carbon steel from an old plough and from the cutting cradle, both differentially hardened.Right: Pleistocene cutlery by Tomáš Kníže, Czech Republic. 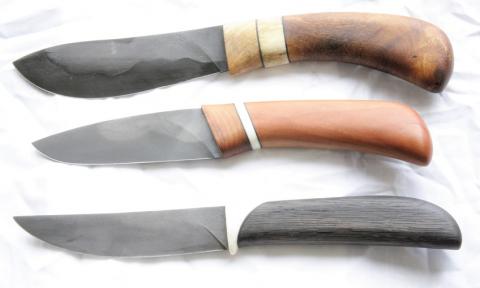 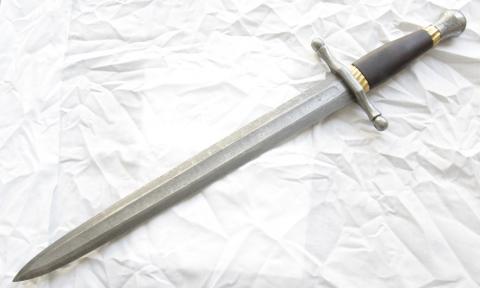 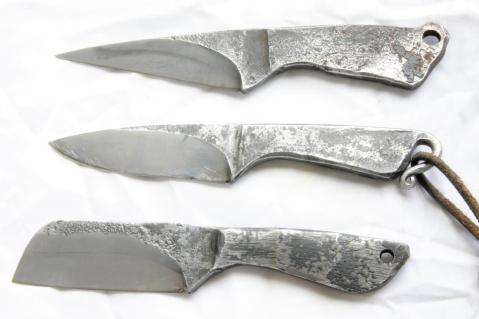 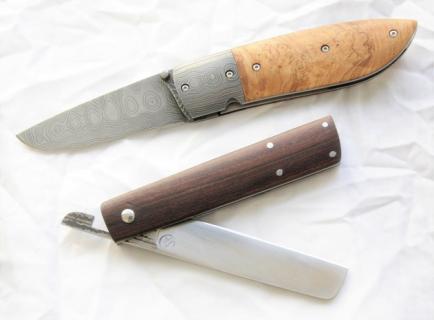 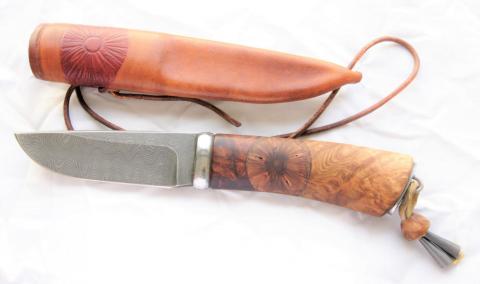 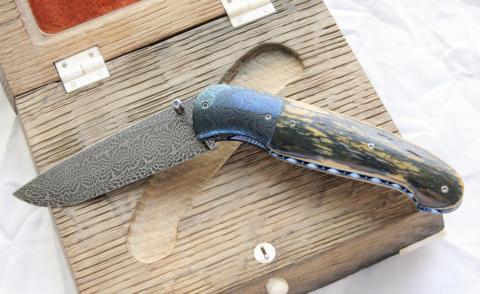 A liner lock folding knife by Michal Jarý, Czech Republic. The 9.5 cm blade is made of carbon Damascus. It contains a sapphire eye in the thumb stud. The handle material is mammoth ivory. The box is made from the wood of 100-year-old wine barrels. 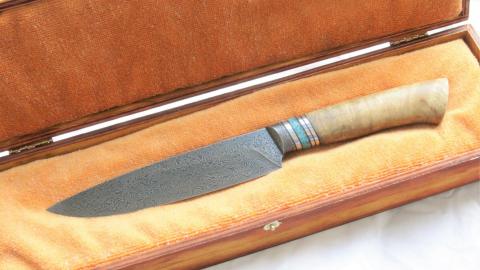 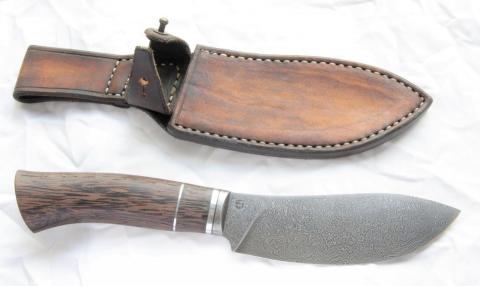 Left: A miniature knife made by Zdeněk Janča, Czech Republic. The 4.3 cm blade is made of carbon Damascus
steel, and the handle consists of grenadille wood, silver and gold. Overall length of the knife: 7.2 cm.
Right: Two knives by Gerd Strobach, Zlín, Czech Republic. The top one is called the Velbloud (camel), the bottom one does not have a name.
Our sponsors
Advertisements
Dit is een geprinte versie van de publicatie op