Knife collector: Some interesting knives from the collection of Christoph Verstappen

Knife collector: Some interesting knives from the collection of Christoph Verstappen

With knife shows being cancelled all over Europe, we take the opportunity to show you some interesting pieces from a knife collector, in this case Christophe Verstappen. Having known many knife makers for quite some time, his collection has some nice early work. 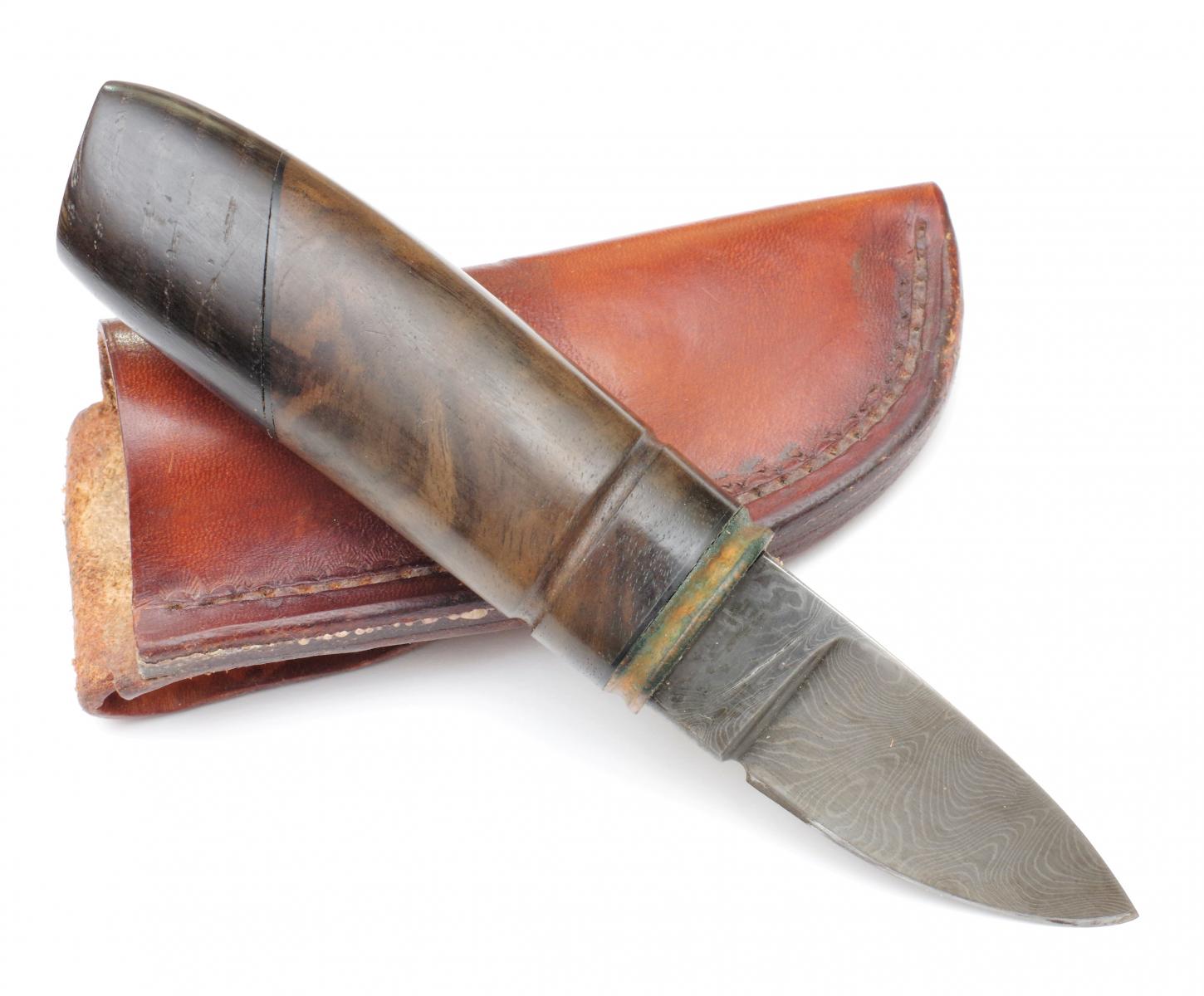 An early knife by Toni Oostendorp from the Netherlands. The blade is home-made Damask, the bolster
is bronze and the handle is Walnut.
Psychologists have written many books about the complex mental world of collectors. You often read they are pitiful people. Always looking for pieces missing from their collection, and once they have found them, the joy of the acquisition soon gives way to the worries for the next missing piece.
I don't know if knife-lovers are special people (most of my readers will think so), but at least they don't look like the stereotypical Collector. The knife collectors I have met over the last few years almost all share a lot of fun in their collection, but they can be just as happy for their colleagues. The world of knife collectors seems quite relaxed.
Just as with collectors of modern art, a personal contact with the maker plays a big role. Many collectors know the makers of their knives, and more often than not they have ordered their knives from them in person – happily waiting a few months or more for their prized possession to be delivered. 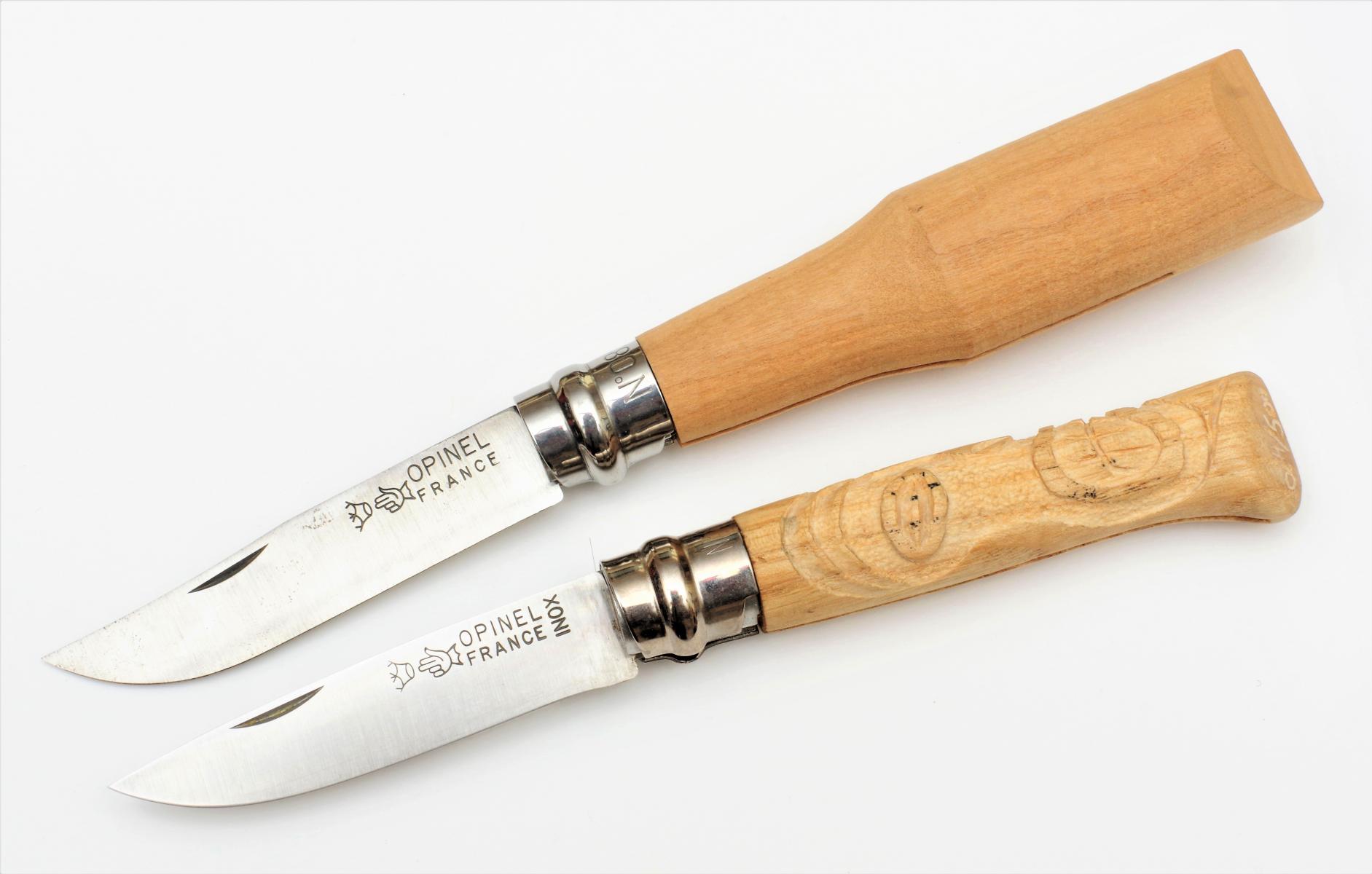 Two Opinels. The top knife is a normal model, but with an oversized handle, so the customer should finish
it himself. The handle of the lower knife was sculpted with a Tiki mask.
Collectors come in all shapes and sizes. That is no different when it comes to knives. There are collectors of historical knives, factory knives, custom knives, knives from one manufacturer or maker, knives of a certain type or model (e.g. bowies or folding knives) or knives with a certain mechanism.
And then of course you have the omnivores; people for whom each knife has something special, no matter what it is or where it comes from. Christophe Verstappen belongs to the latter category. You may know him as a collaborator to European Blades Mag, a professional soldier, member of the board of the Belgian Knife Society, co-organiser of the annual knife fair in Gembloux, passionate knife lover and, last but not least, a passionate collector. 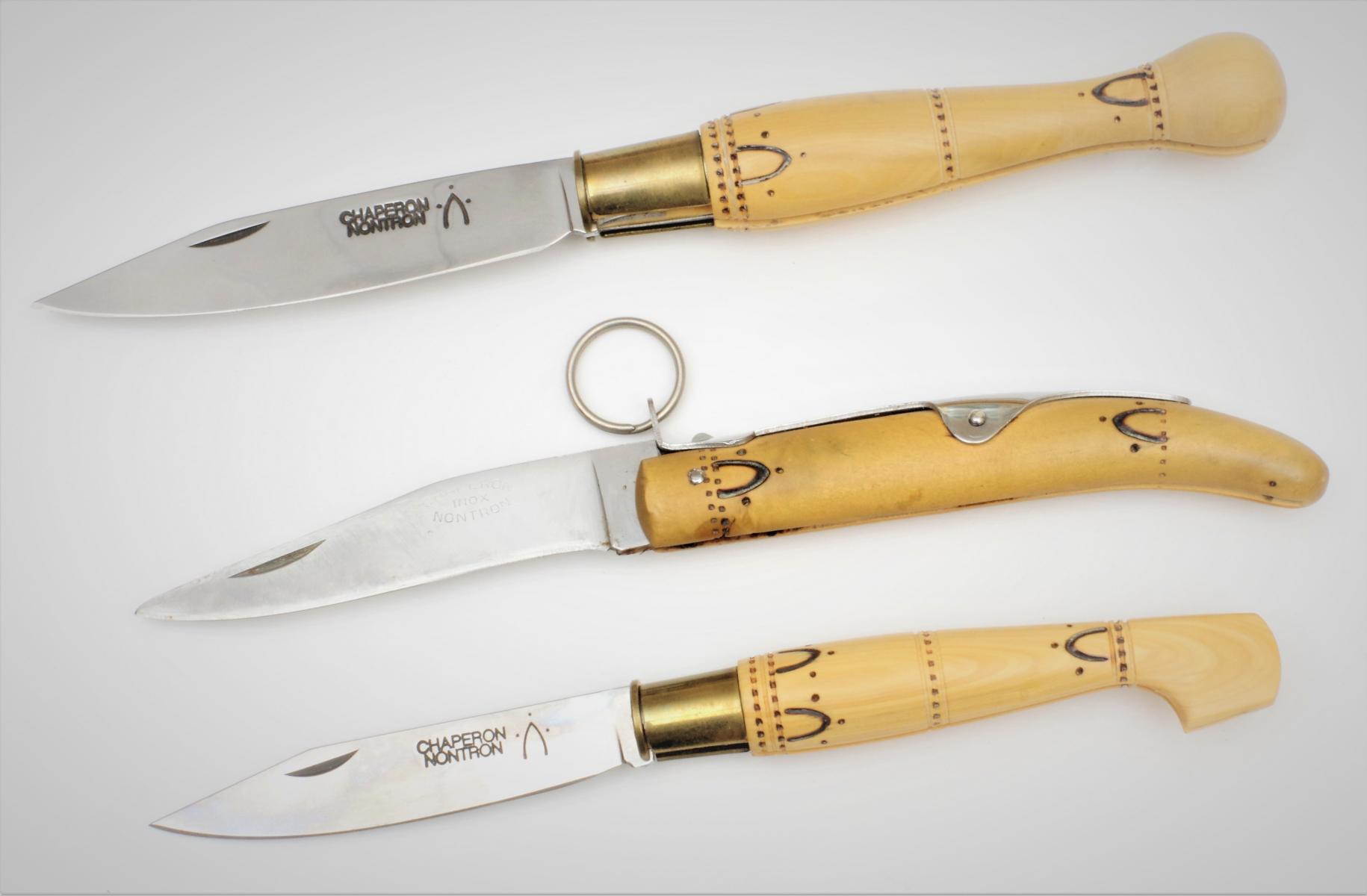 Christophe used to live and work near Nontron, a famous knife centre, so he has various examples of the
local knife model. The top knife is the ‘Boule’ (Ball). The centre knife is the Model 14-18; a similar model
was carried by French soldiers in the trenches during World War I. The lower knife is the ‘Sabot’
(the Wooden Shoe). All three have Boxwood handles.
Christophe got his first knife when he was six years old. It was a gift from his grandmother during a family visit in Vianden (Luxemburg). He started collecting seriously around the age of 16, 17. His collection is large and varied. "A knife is a knife", he says, and for Christophe, every knife has something special. Since he has known many knife makers for a long time, he has a lot of custom knives; often early work by now familiar names. On the following pages we show a (very) small part of his collection. A warning in advance: Christophe has used almost every knife in his collection for a short or longer period of time but he sometimes lacks time for the necessary maintenance. So don’t be surprised by a scratch or a spot of rust. 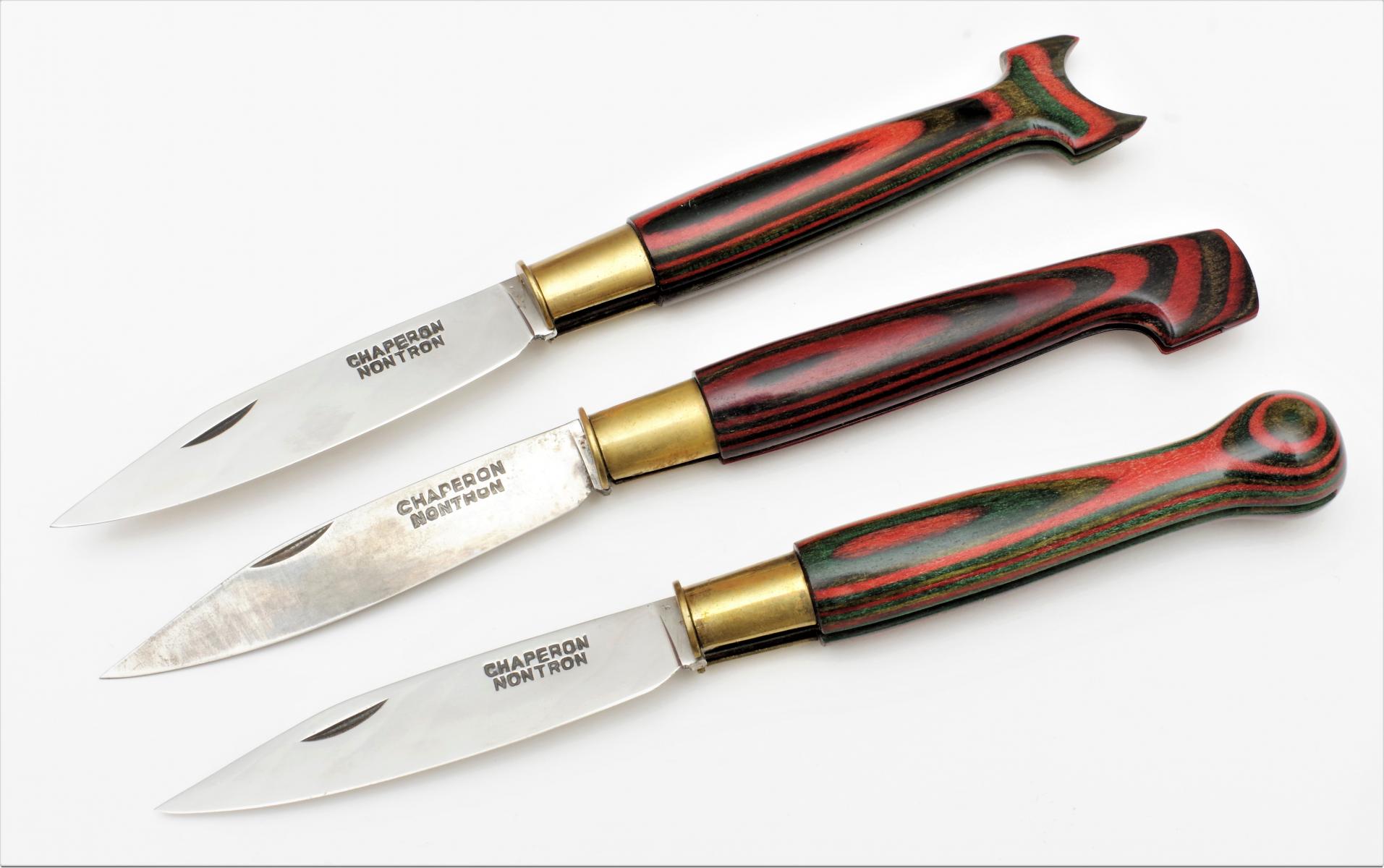 Three Nontron knives, with an experimental Alpaca wood handle. The models are, from top to bottom:
‘Queue de Carpe’ (the Carp’s Tail), ‘Le Sabot’ (the Wooden Shoe), and ‘Le Boule’ (the Ball). 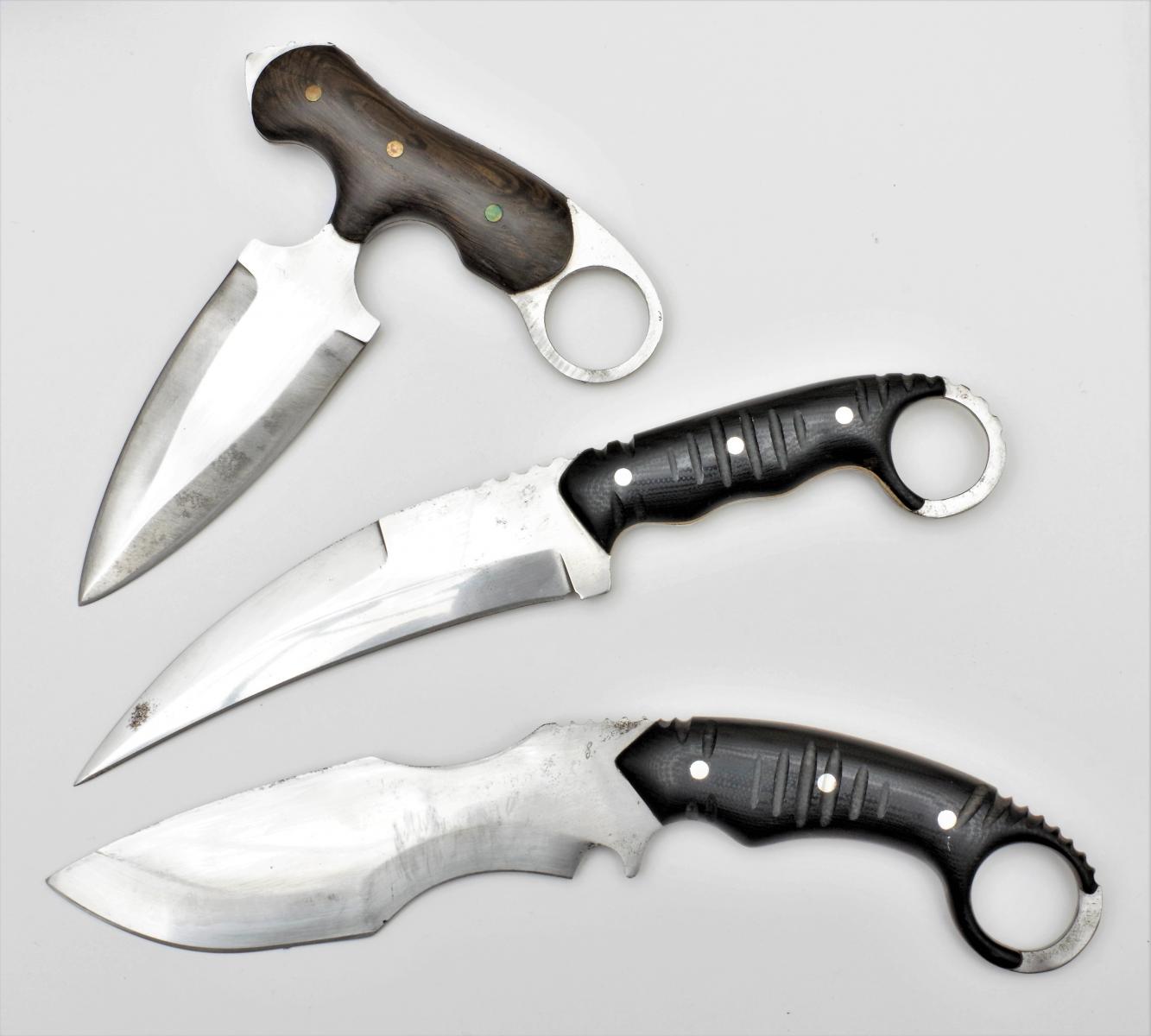 Filip de Leeuw from Belgium made these three warrior knives on Christophe’s request, for the time he was
on active duty. All three have A2 blades. The top one is a push dagger with a handle from Bog Oak (Morta)
which includes a glass breaker. The centre knife is a Karambit with G10 handles and the bottom knife is a
Tactical, also with G10 handle scales. 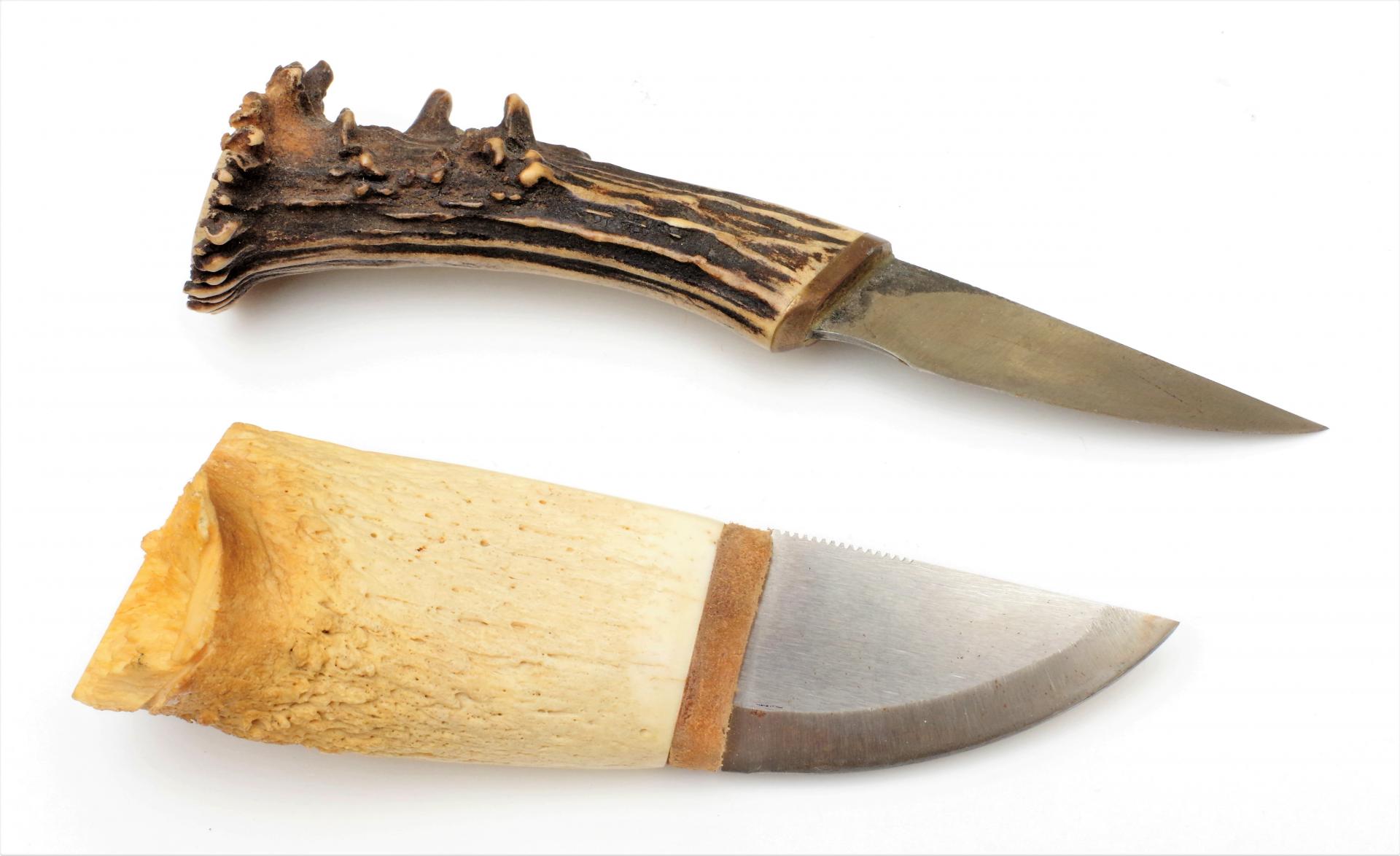 The upper knife was a birthday gift for Christophe from David Tellier, with a Damask blade and a handle from
deer antler. The lower knife was made by a Belgian company called Trapper Cutlery (which no longer exists).
The blade is from D2, which the company thought could do without hardening – which proved a mistake.
The handle of  leather and the part of a cow’s skull which forms the base of the horn. 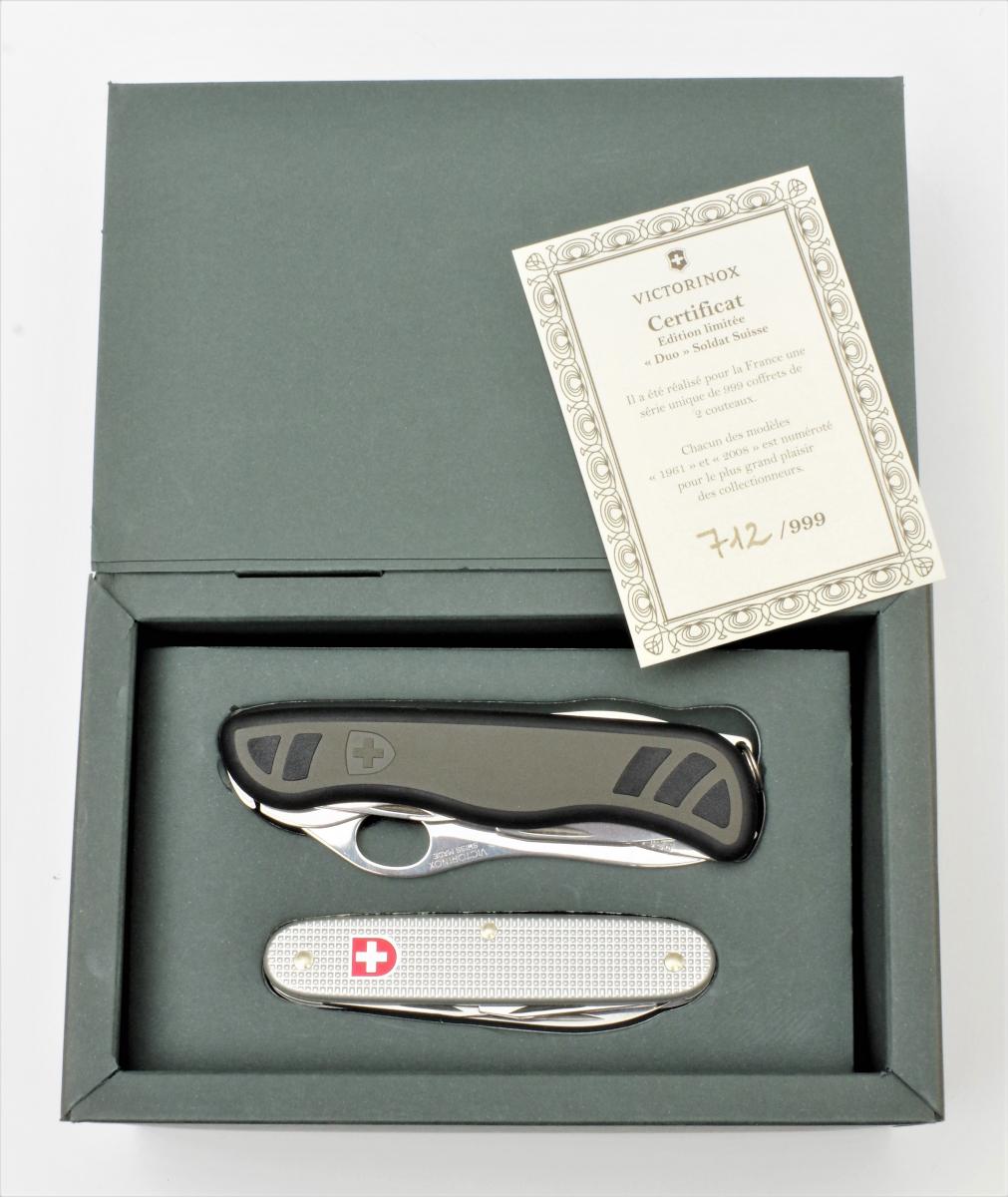 Victorinox made this limited edition called “Duo” Soldat Swiss. It consists of two Swiss
Army Knives, the models of 1961 and of 2008. Of this numbered set, 999 pieces were
made for the French market. 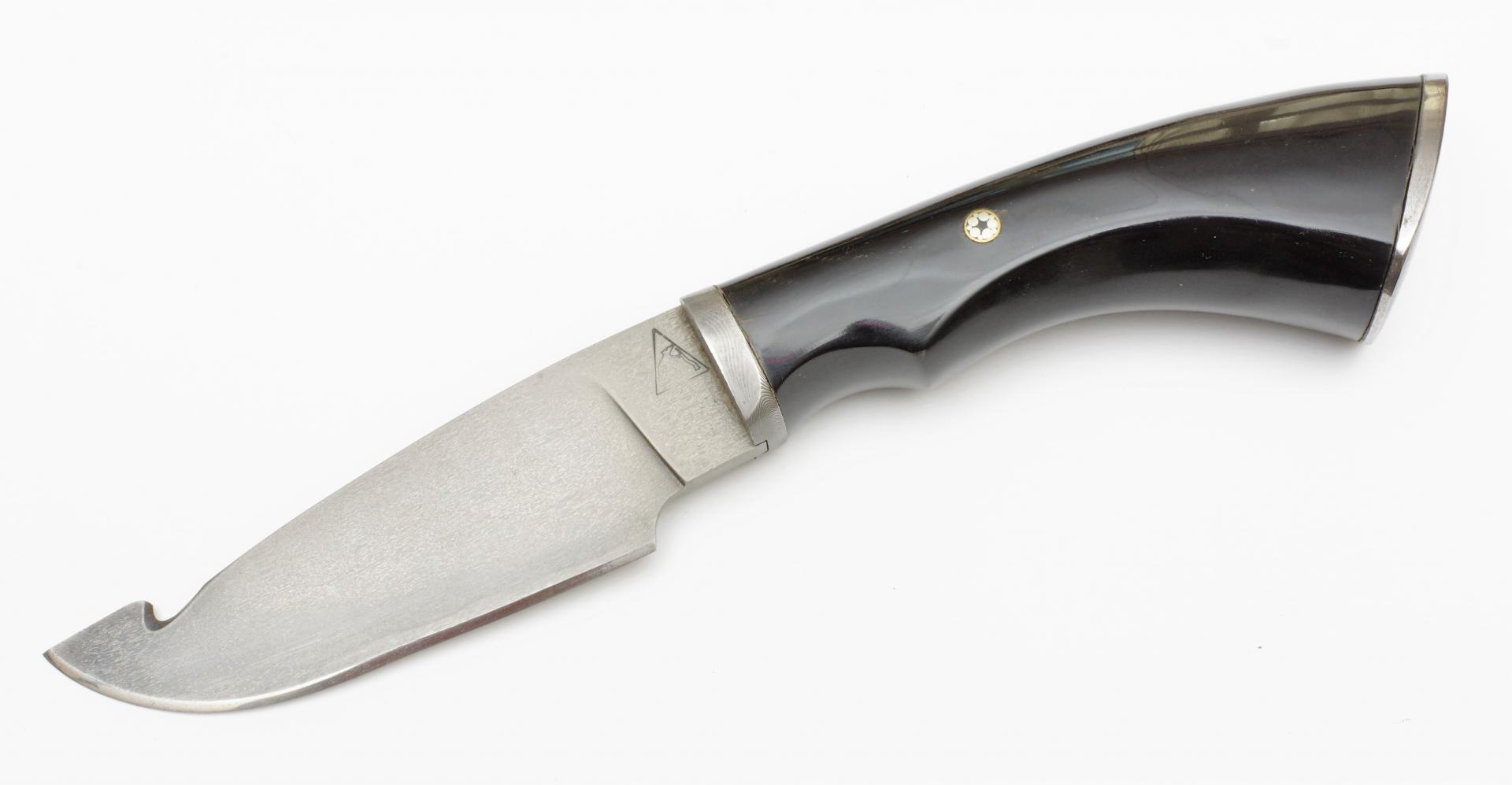 A Wootz skinner made by Fabian Damenet. The bolster and endcap are Damask, the handle is Buffalo horn. 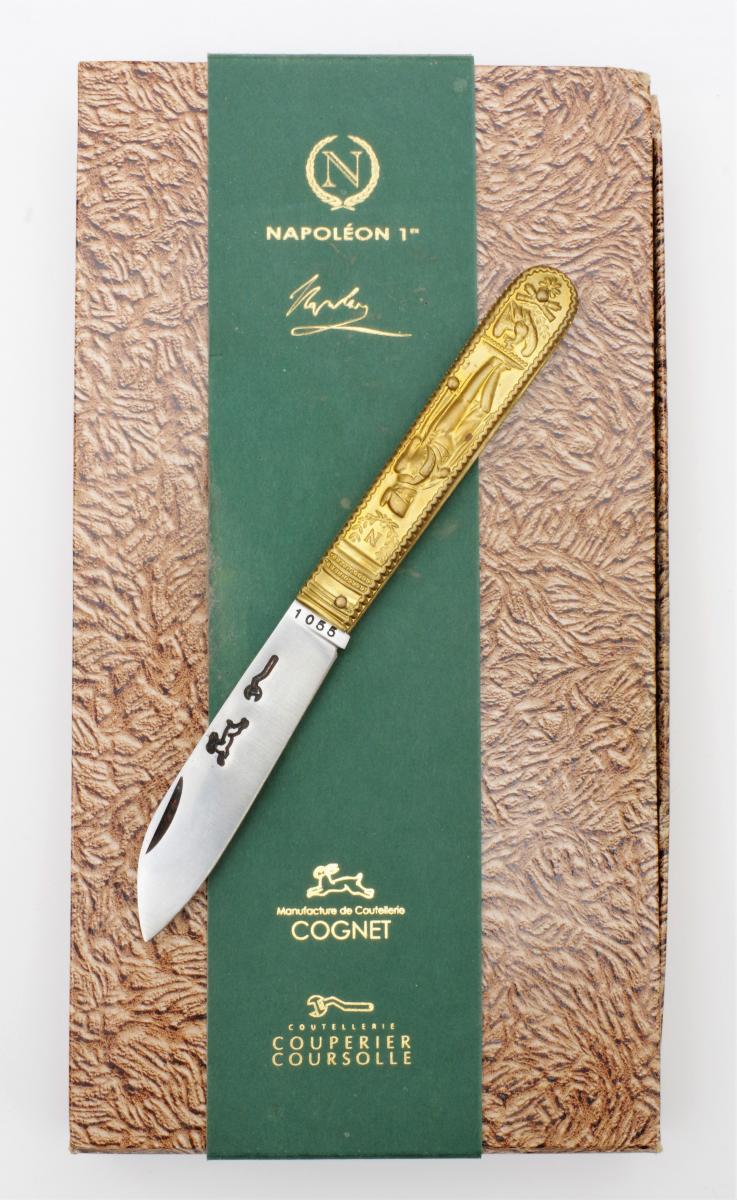 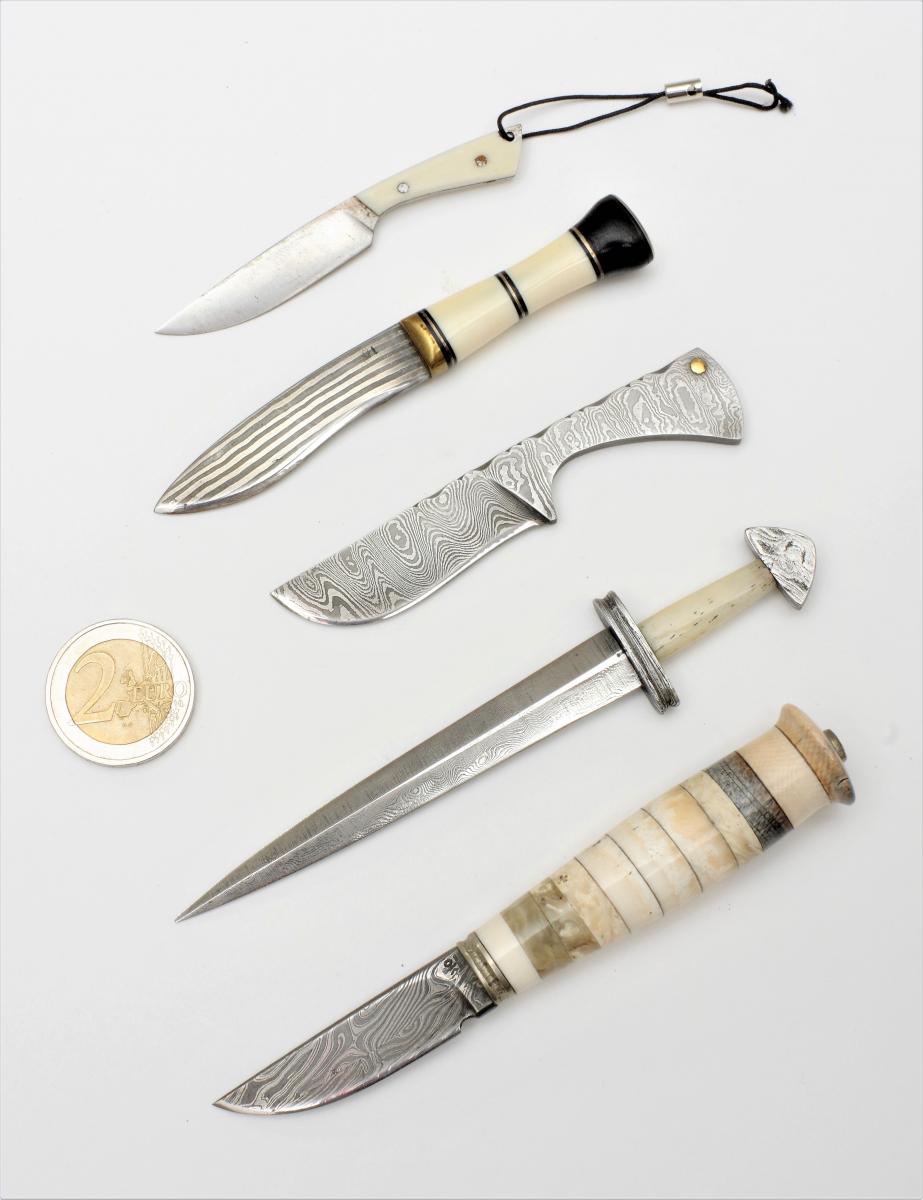 Left:The ‘Napoleon 1er’, a collaboration between the French Cognet and Coursolle knife making companies. The story
goes that knives such as there were carried by Napoleons soldiers, during his many campaigns. The moulds for the
handle scales were retrieved, and a new limited edition was made several years ago.
Right: The picture from the cover of this issue. These miniature knives were made by, from top to bottom:
- Louis Régel with a deer antler handle;
- Gudy van Poppel; a mini kukri with a Damask blade, Bronze bolster and handle from Mammoth ivory with Ebony
and Silver spacers;
- Véronique Laurent; a one piece Damask knife with a 24 carat golden pin;
- Alessio Salsi; a miniature Viking sword with a Damask blade and guard and a Osik handle;
- Gudy van Poppel; a Puukko style knife with a Damask blade, and a handles made from Musk Ox, Warthog Tooth,
Hippo tooth, Osik, Mammoth Ivory and Silver. 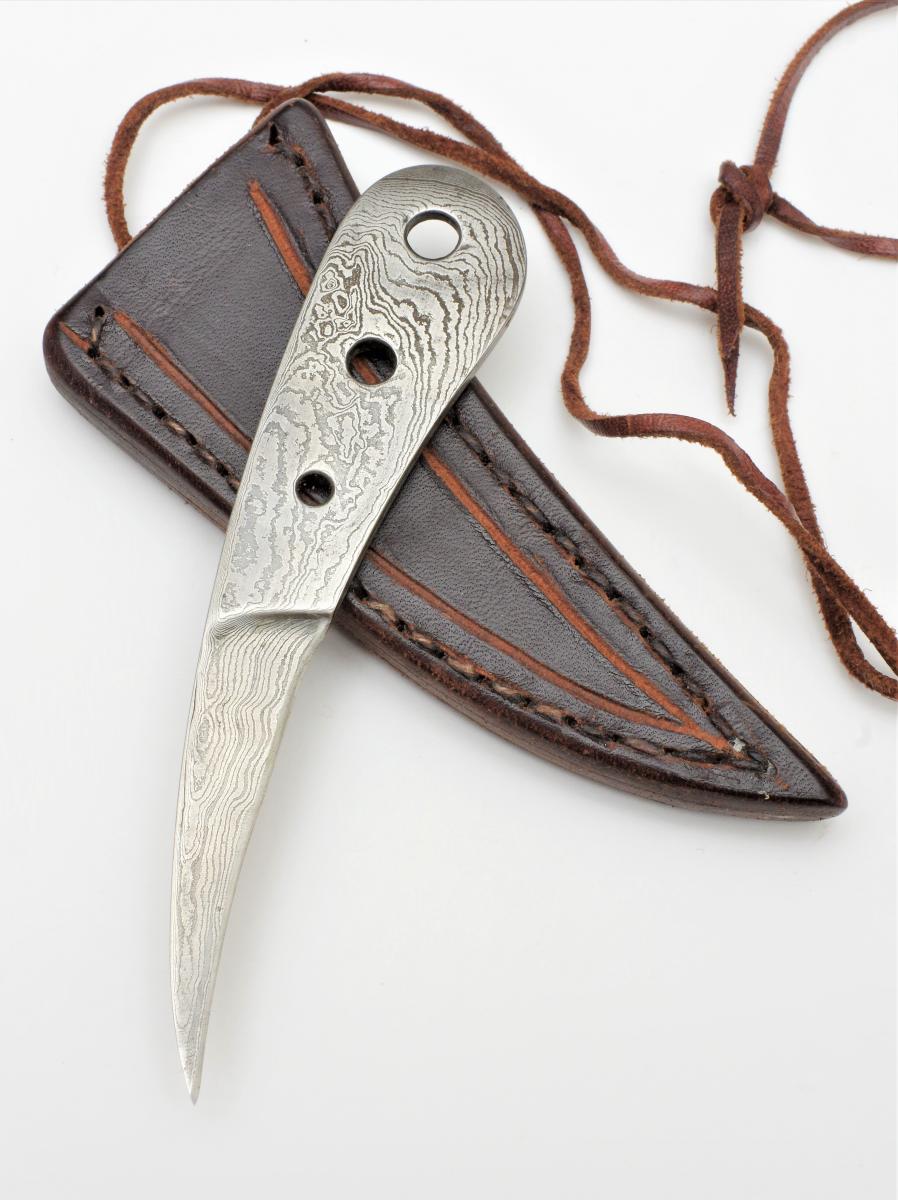 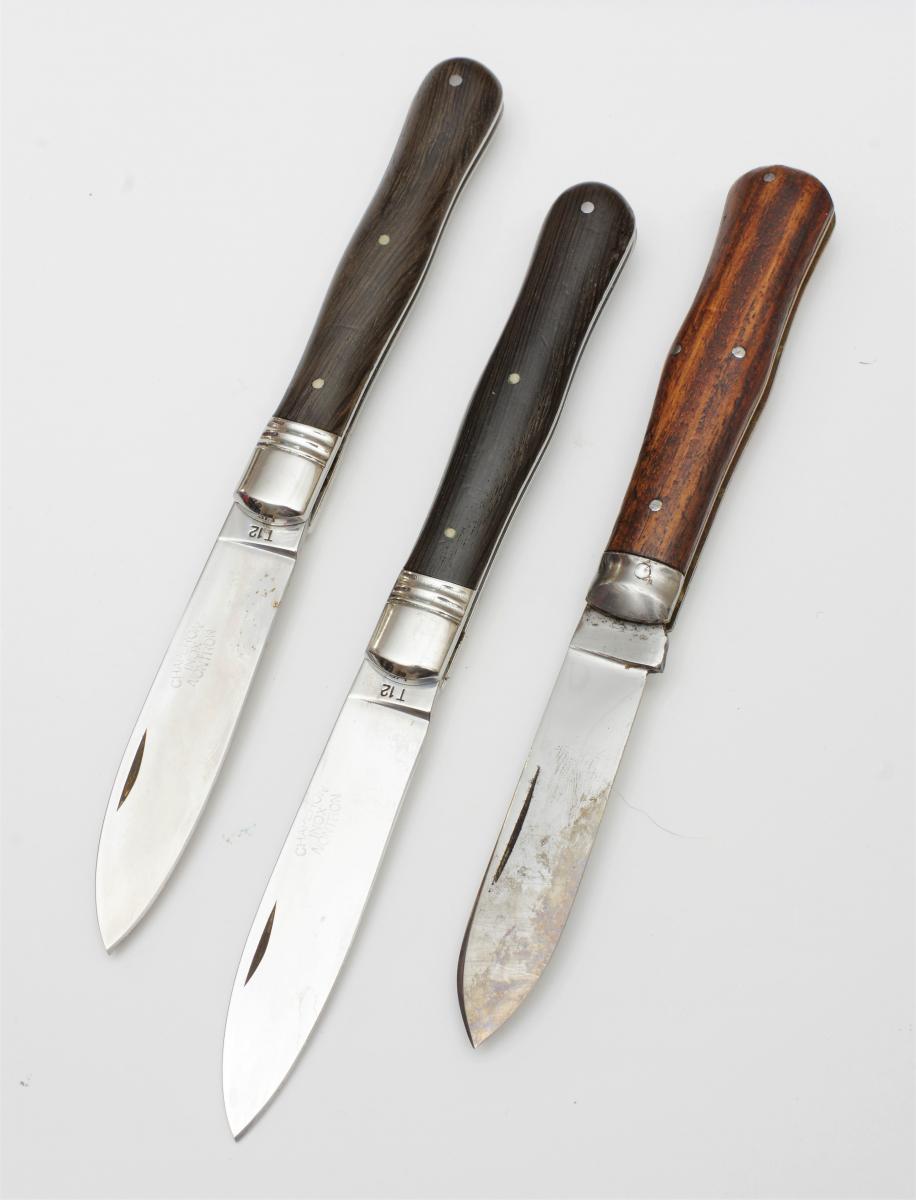 Left: A neck knife (‘Griffe’) by Alessio Salsi, made from Damask.
Right: This knife model is called ‘le Violon’ (the violin). The two knives on the left were made in Nontron.
The handles are from Morta (Bog Oak). A friend of Christophe’s mother had found a 5000 year old tree in the
Maas basin. It was recovered, dried, and Christophe got a board. Three pieces of the Violin were made with
this Morta, of which Christophe has two.The knife on the right is an Italian version of the Violin, a gift by
Alessio Salsi.

The two Violin knives from Nontron, seen from the other side, with the name of the proud owner etched
on the blades. 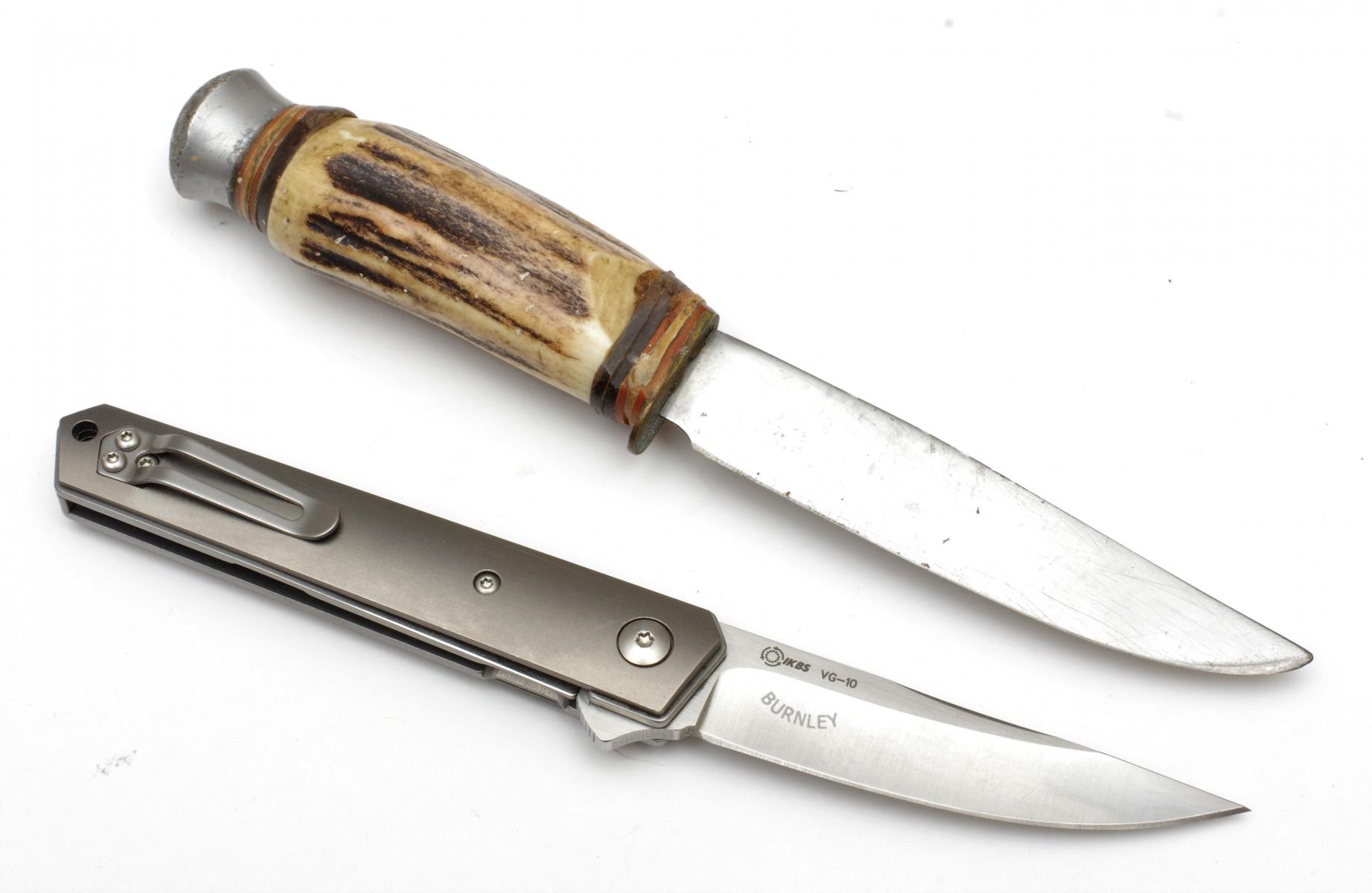 The top knife is the first that that Christophe ever got. It was a gift from his grandmother when he was six years old,
during a family visit in Vianden (Luxemburg). At the time we took the pictures, the lower knife was his latest addition:
a Böker Kwaiken folder. In the meantime his collection has expanded further.

This Piémontais is the first folder that Gudy van Poppel made. The Damask was made from an old chainsaw,
the knife has Bronze bolsters and Morta handle scales. The tongue of the blade has a small Safire, which
locks the blade in the handle, when opened. 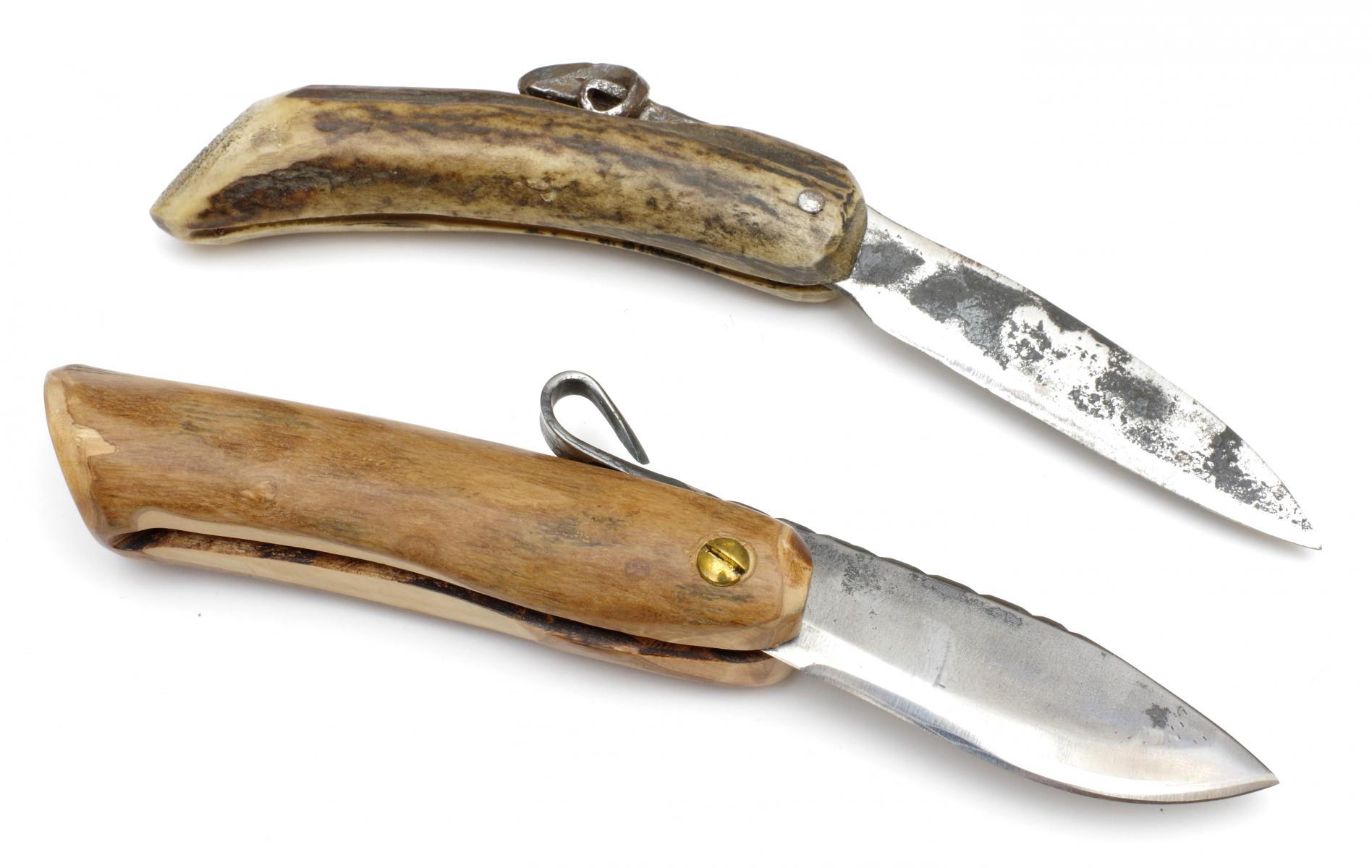 Two rustic Piémontais knives. The upper one, by Christian Ronse, has a forged ram’s head at the end
of the tongue, and Deer Antler handle. The lower knife is by Marcel Lambotte, who used wood from his
own garden. 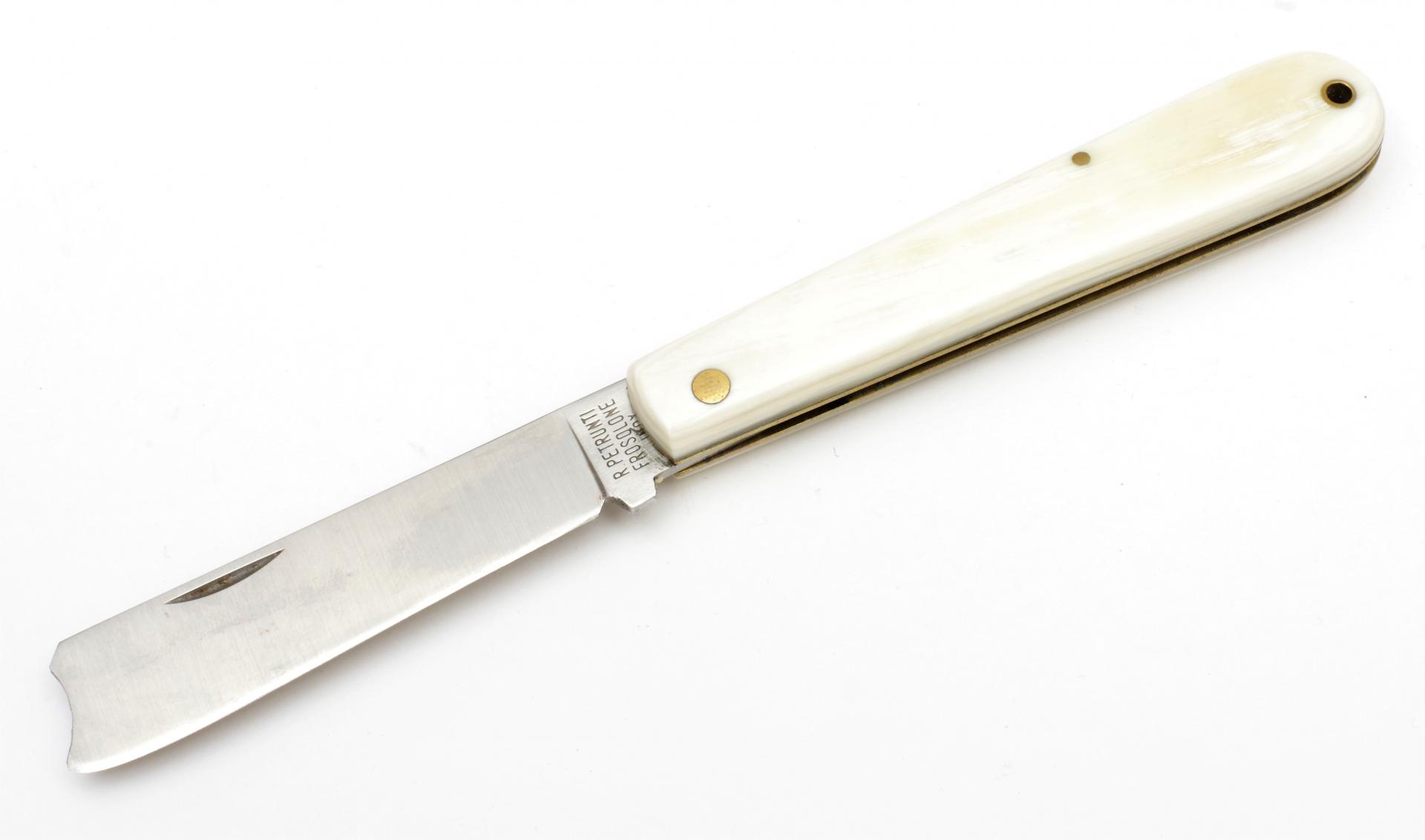 Collectors can have traditions. One of Christophe’s is that every year he buys an Italian knife from the
same booth at the Coutellia in Thiers. This one originates from Sardinia. 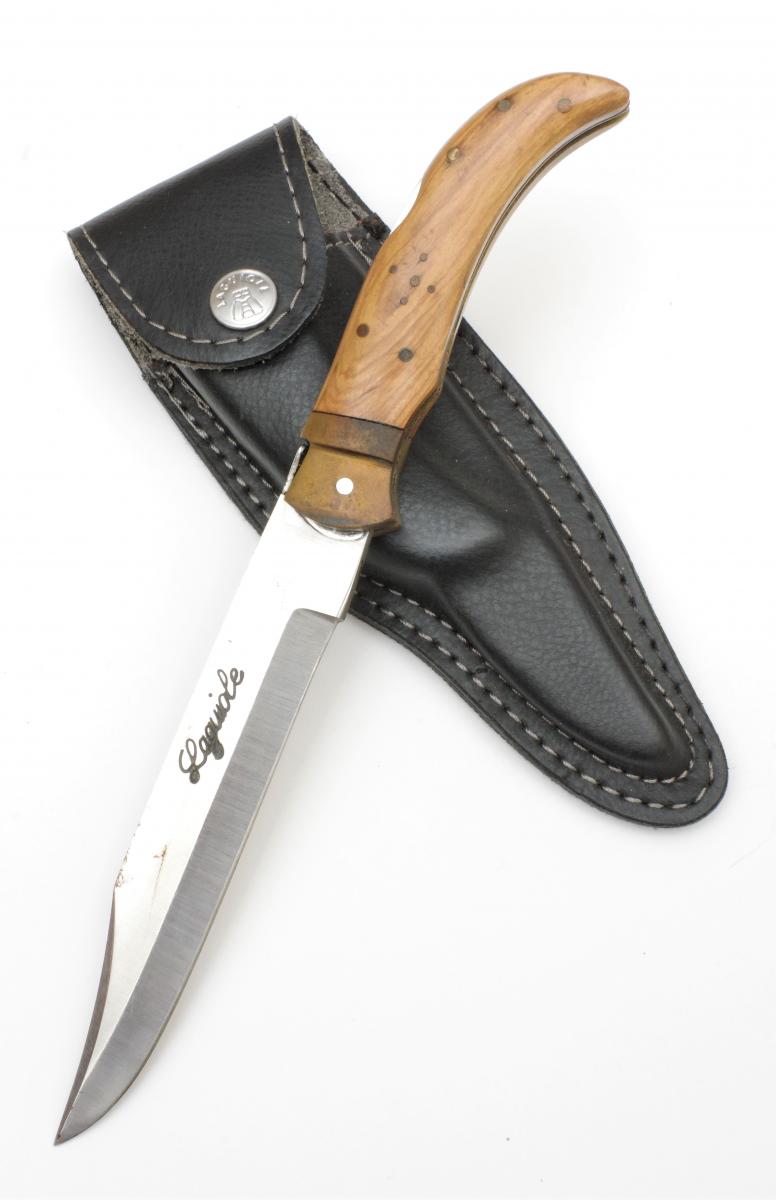 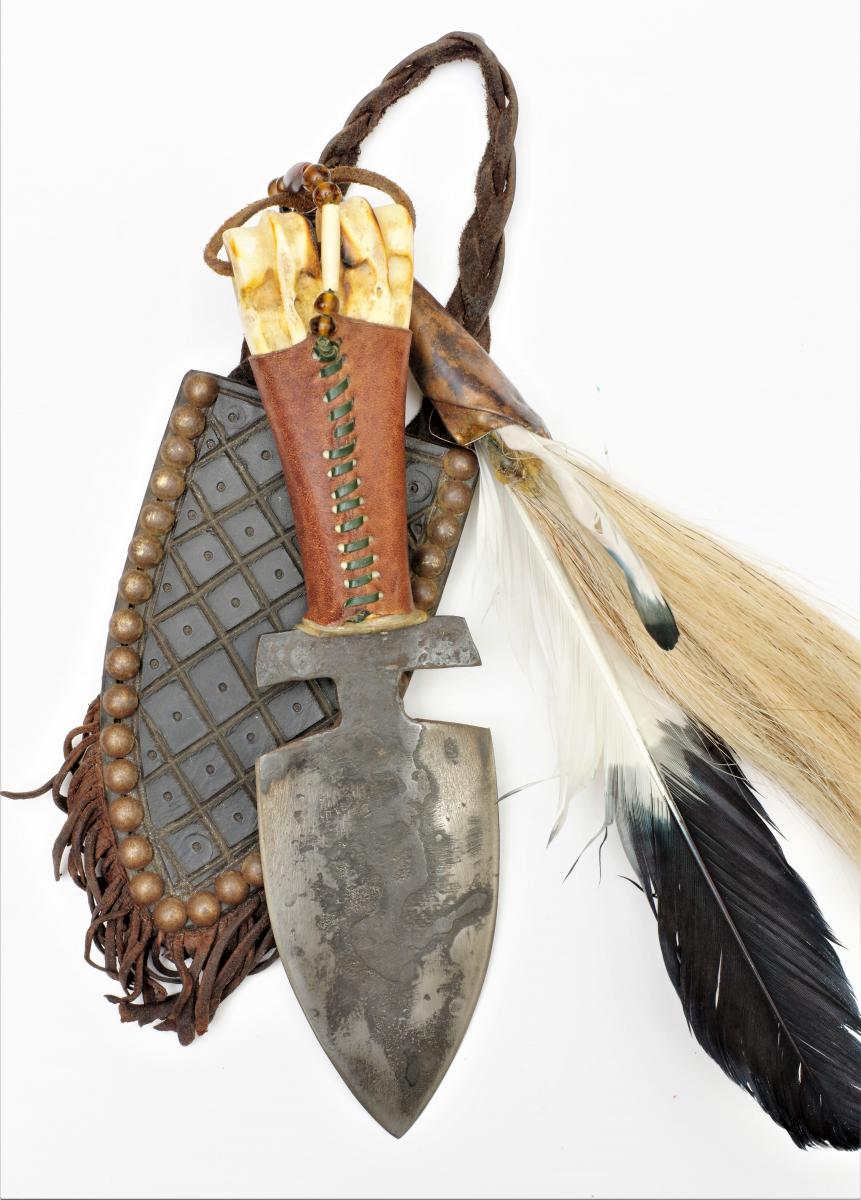 Left: This peculiar knife is supposed to be a Laguiole, but is more likely to come from Pakistan. Christophe
got it from a colleague, and so it found its way into his collection.
Right: The ‘Native American’ by Jacques Delfosse. The blade was forged by Jacques van Uffelen. The
bone handle is wrapped with leather and decorated with horse hair.

A Vietnamese kitchen knife, probably forged from spring steel. A friend of Christophe went bicycling in
Vietnamand encountered this knife along the way. Christophe still uses it with great pleasure for hard
vegetables such as turnip. 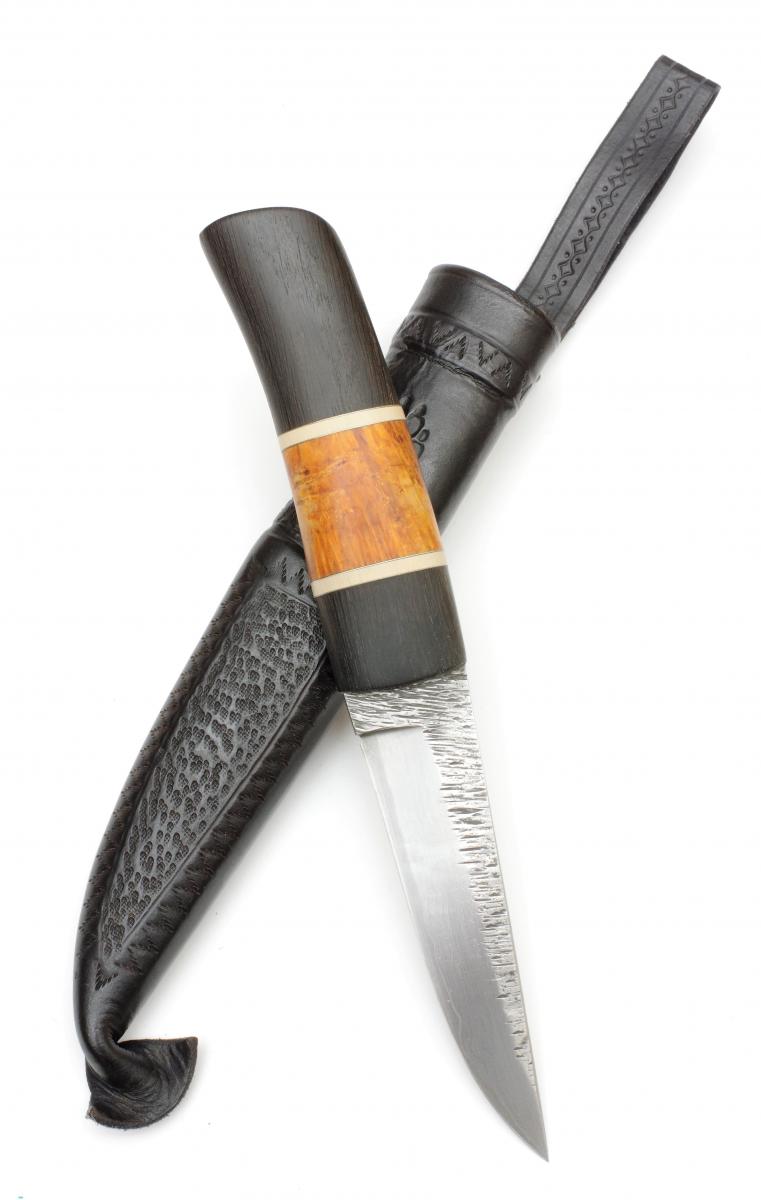 A Puukko made by Alessio Salsi. The steel is TWR 1.2513,
the handle is Ebony and Ivory. 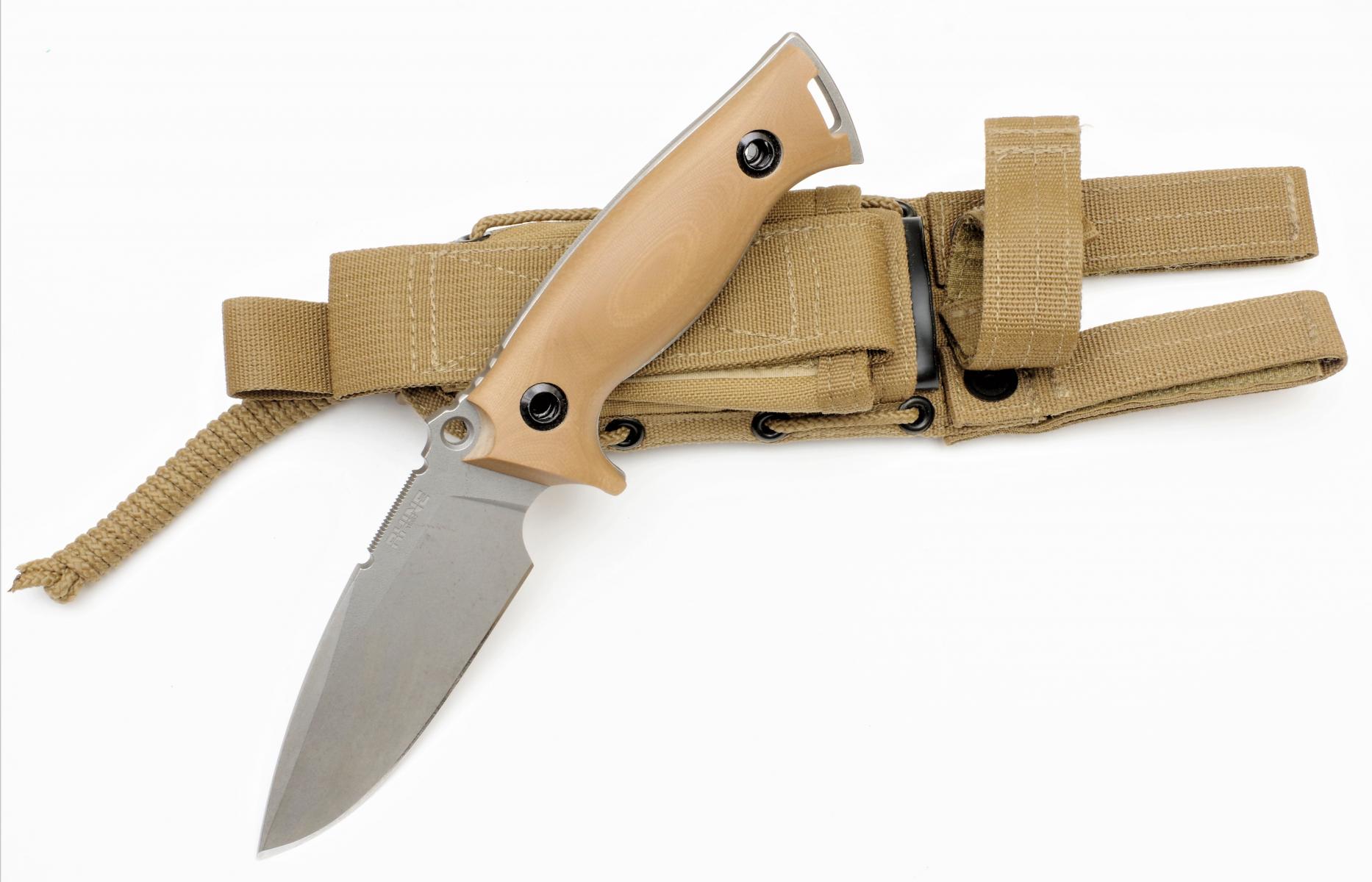 A semi-custom Bull Shark by Toni Oostendorp. The blade for this one was made by Générale de Découpage
in Thiers. The handle scales are Coyote G10.

This knife, called ‘Le Mareval’ is a prototype by Alain Dessy (deceased) with a new locking mechanism.
The handle is Thuja burl. Christophe received the knife in 2005. 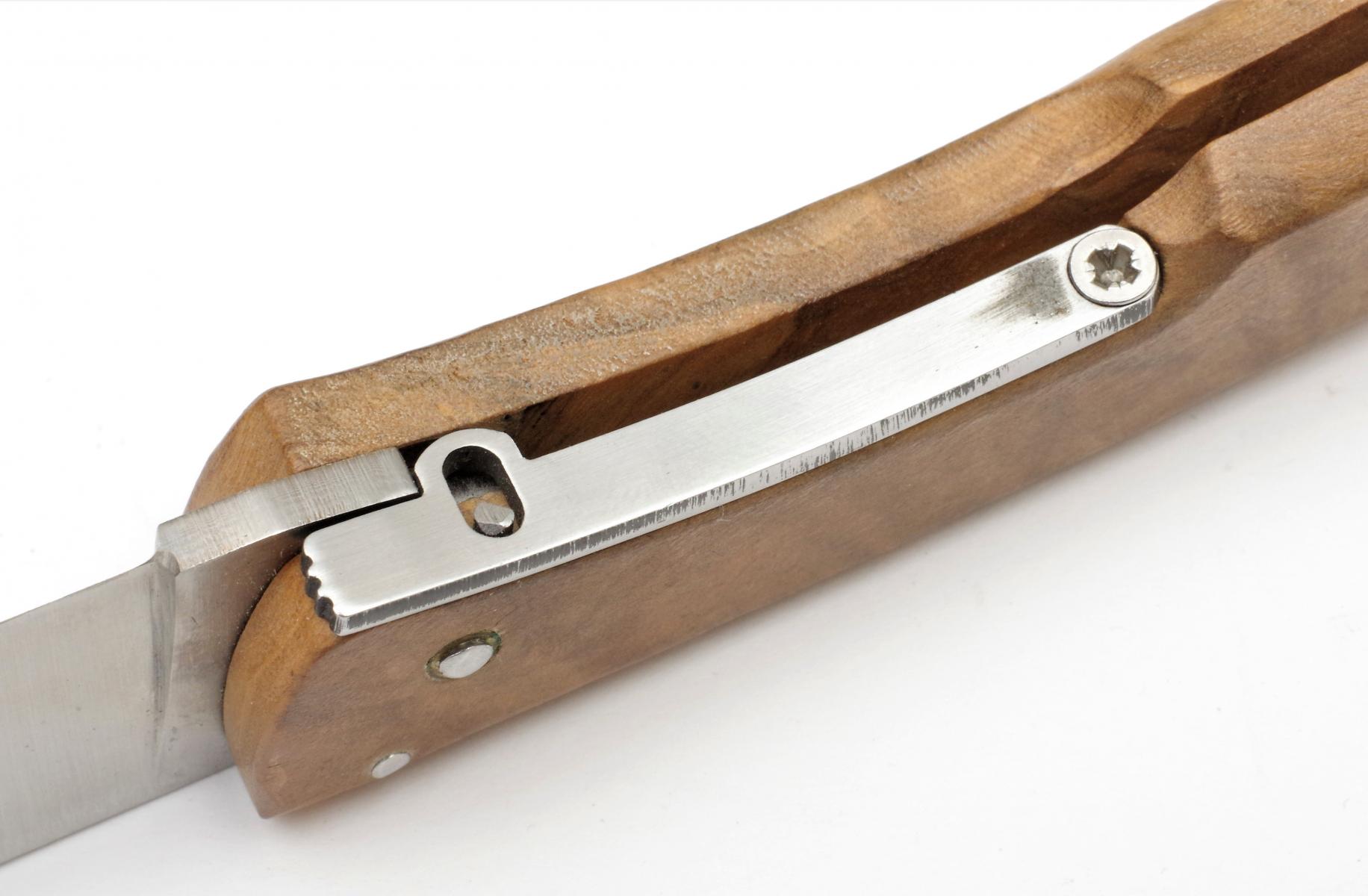 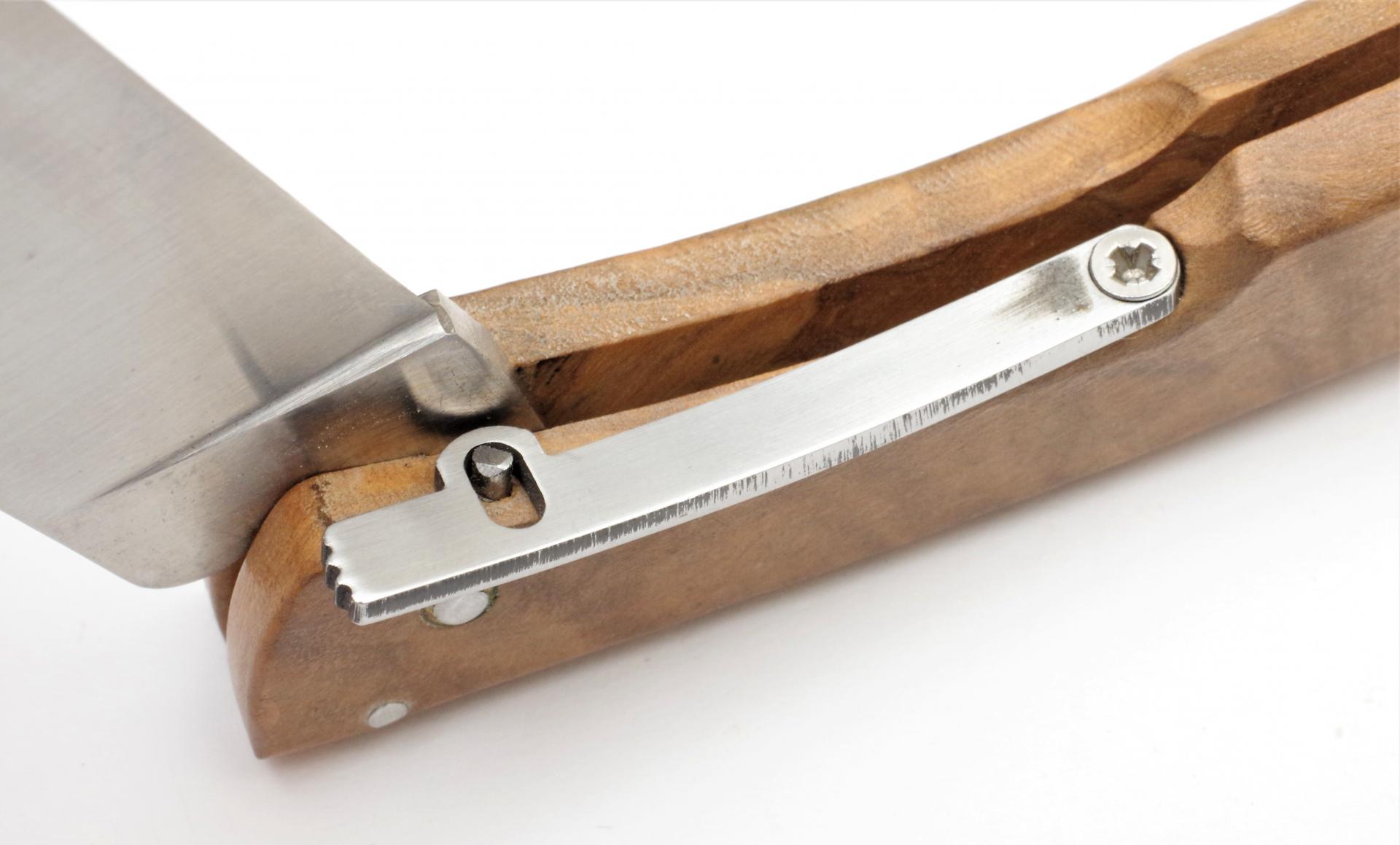 A Kiridashi by Remi B., a gift for Christophe’s 35th birthday. De Damask knife has a Ray skin handle with
a Japanese cord wrap. 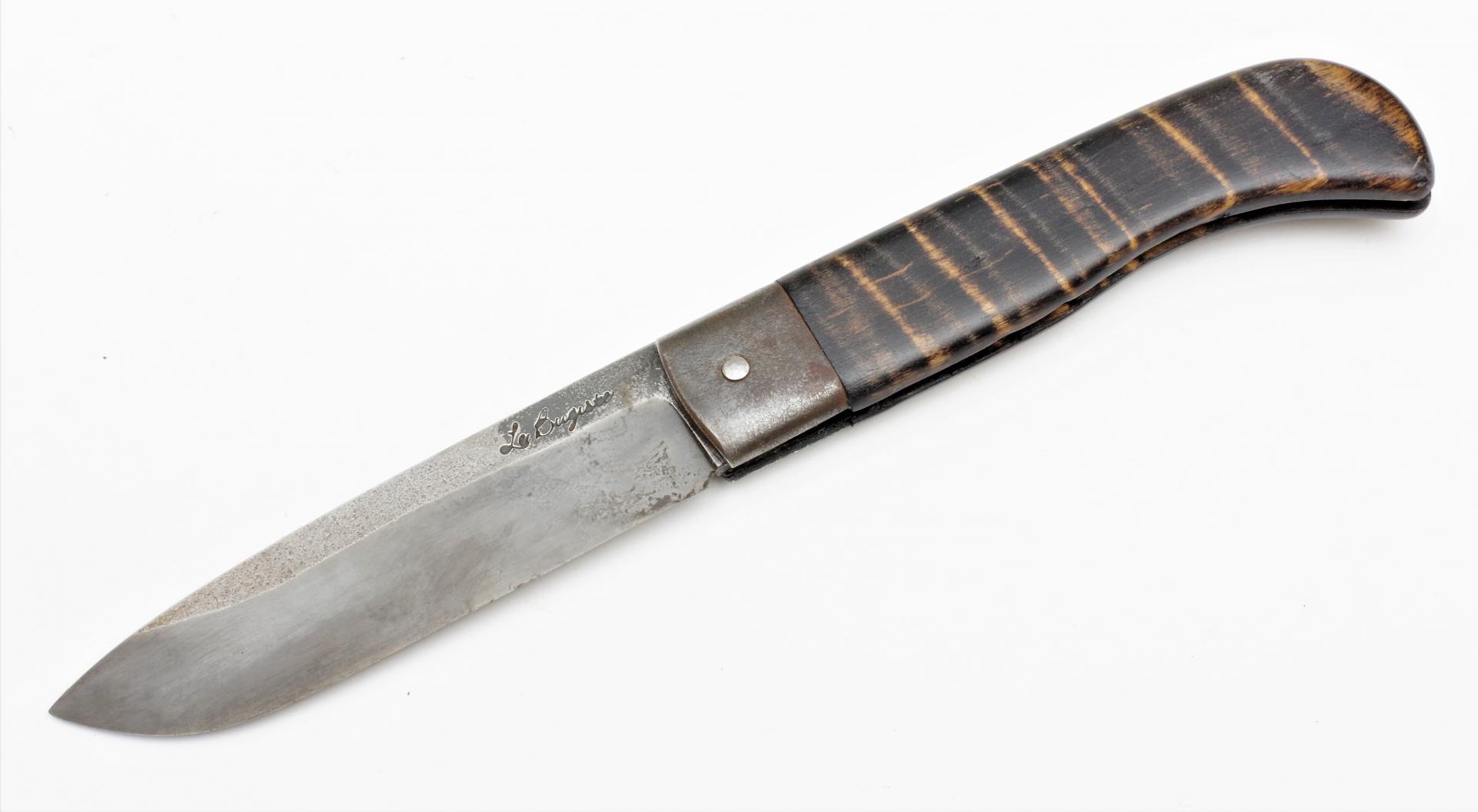 ‘Le Bugiste’ (named after the French Bugey region) is a knife model from Frédéric Maschio. Christophe is
board member of the Belgian Knife Society (BKS). This knife was a gift from the BKS for his work in preparing
the annual BKS knife show in Gembloux. The knife has a 5160 steel blade and Maple Striped handle. 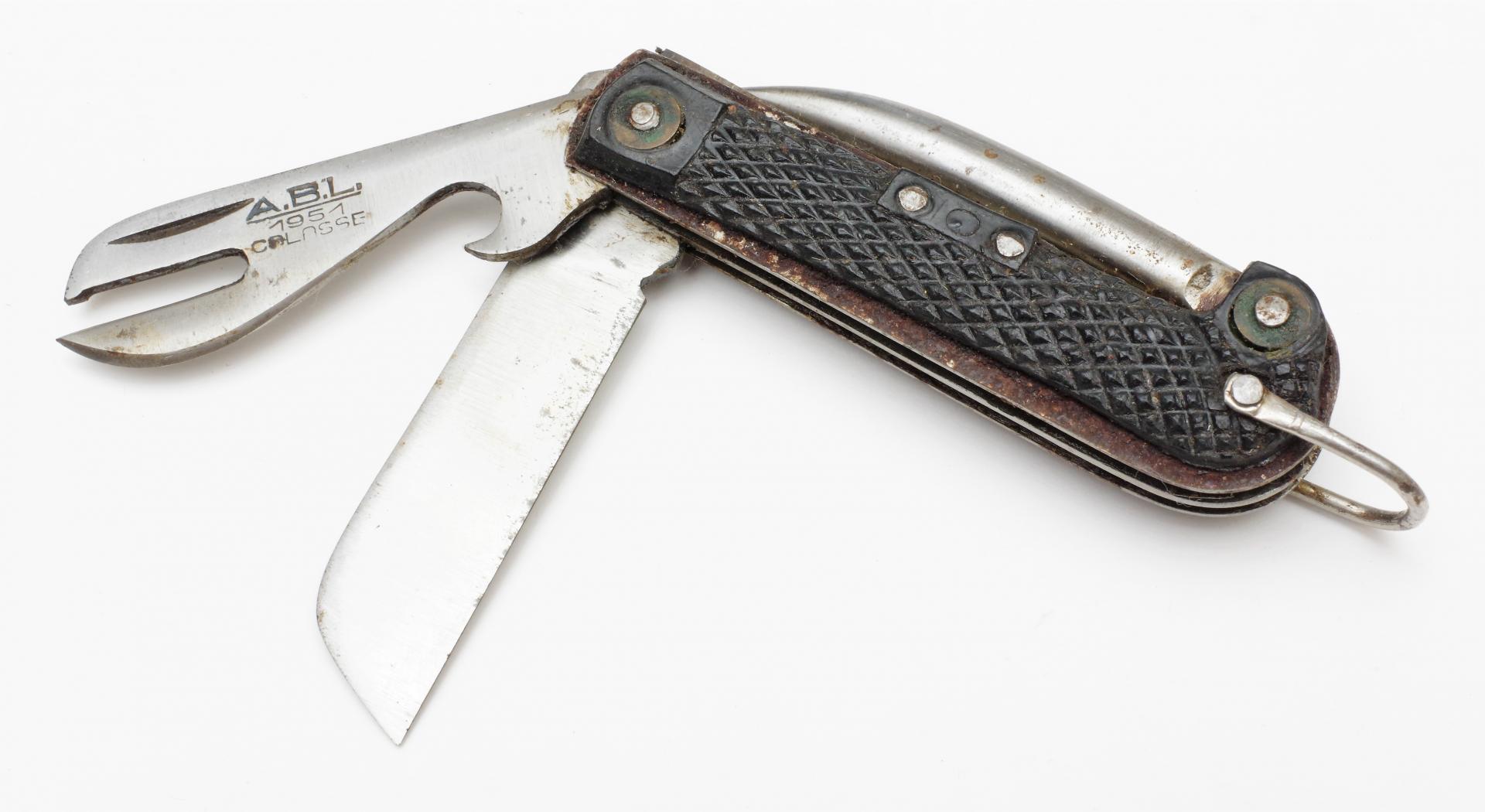 During World War II, quite a few Belgian soldiers managed to escape to the United Kingdom, where
they enlisted again. During the war, most of them carried an army knife made in Sheffield, and a similar
modelwas adopted after the war by the Belgian Army. These are marked A.B.L. which stands for
Armée Belgique/Belgisch Leger, reflecting the two main languages in Belgium (French and Flemish).
When soldiers left military service, they were given a choice: either hand in the knife, or report it lost,
for which they were charged with a 25 Franc fine. This was the equivalent of about 57 Eurocents,
which many soldiers considered an excellent price for their knife!
Our sponsors
Advertisements
Dit is een geprinte versie van de publicatie op