In the United Kingdom, knives are not looked upon as useful tools, objects of art, or examples of wonderful craftsmanship. They are seen as objects of aggression. Take, for instance, this Knife Angel.
The colossal sculpture, 9 meters high, was made by the British artist Alfie Bradley at the British Ironwork Centre in Oswestry, Shropshire, using 100,000 knives. Bradley calls it a national monument against aggression and violence.
The British Ironwork Centre collected the knives from 43 police areas across the country, where they were surrendered in nationwide amnesties in 2015/2015, in a campaign called “Save a life, surrender your knife”.
Each blade was disinfected and blunted by Bradley, before mounting it on the Angel. The Knife Angel reportedly took two years to build.
On November 29 this year, the Knife Angel was erected outside Liverpool's Anglican Cathedral, where it will stay over Christmas, until 31 January. What will happen afterwards is unknown. Apparently the artist would like it to tour the country in an attempt to combat knife violence. 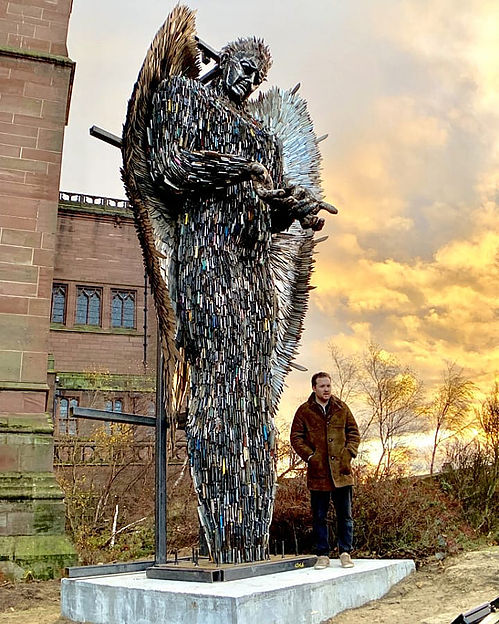 The Knife Angel and its maker, British artist Alfie Bradley.