Europeans winners
European Blades normally does not write about knife shows outside of Europe, but this time we have to make an exception. At the recent Blade Show in Texas, two European custom knife makers were rewarded for the incredible technical and artistic quality of their work.
As ladies go first, we start with Véronique Laurent from Belgium, who received the Best Folder award and the Best Fighter award – for two different knives, of course. It is noteworthy that everything came from here hands, from the Damask steel to the engraving. European Blades Mag. published an interview with Véronique five years ago in issue number 1, which you can read on our website. 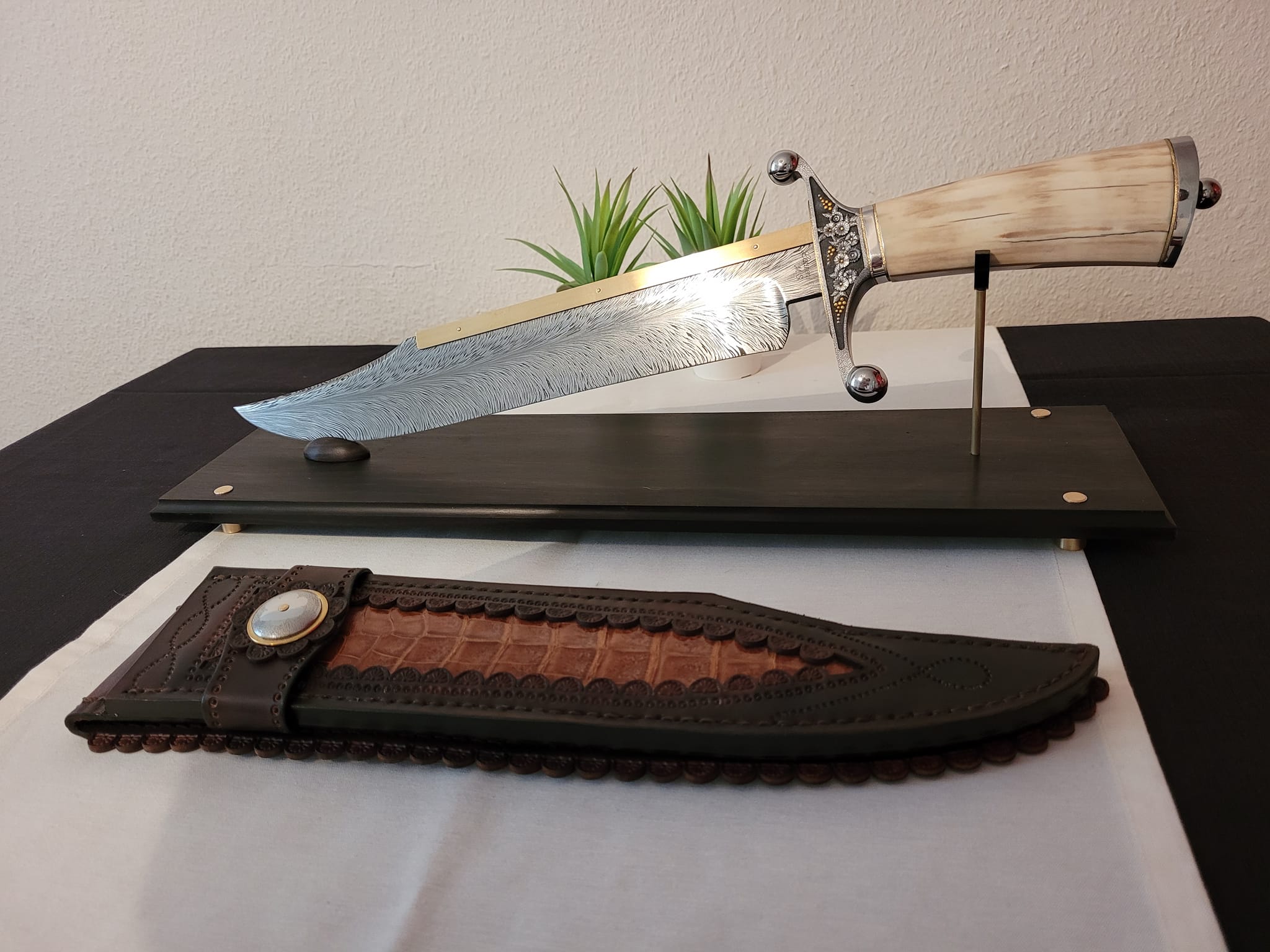 French custom knife maker Jean-Louis Régel flabbergasted everyone with a case with an incredible Bowie and accessories, reminiscent of the 19th Century French duelling pistols. Again, every part, including the engraving, was made by himself. Jean-Louis received the Best Art Knife award and Best in Show award. A second knife received the Blade Show Best Bowie award. Congratulations to both for these wonderful results and of course their incredible craftmanship. 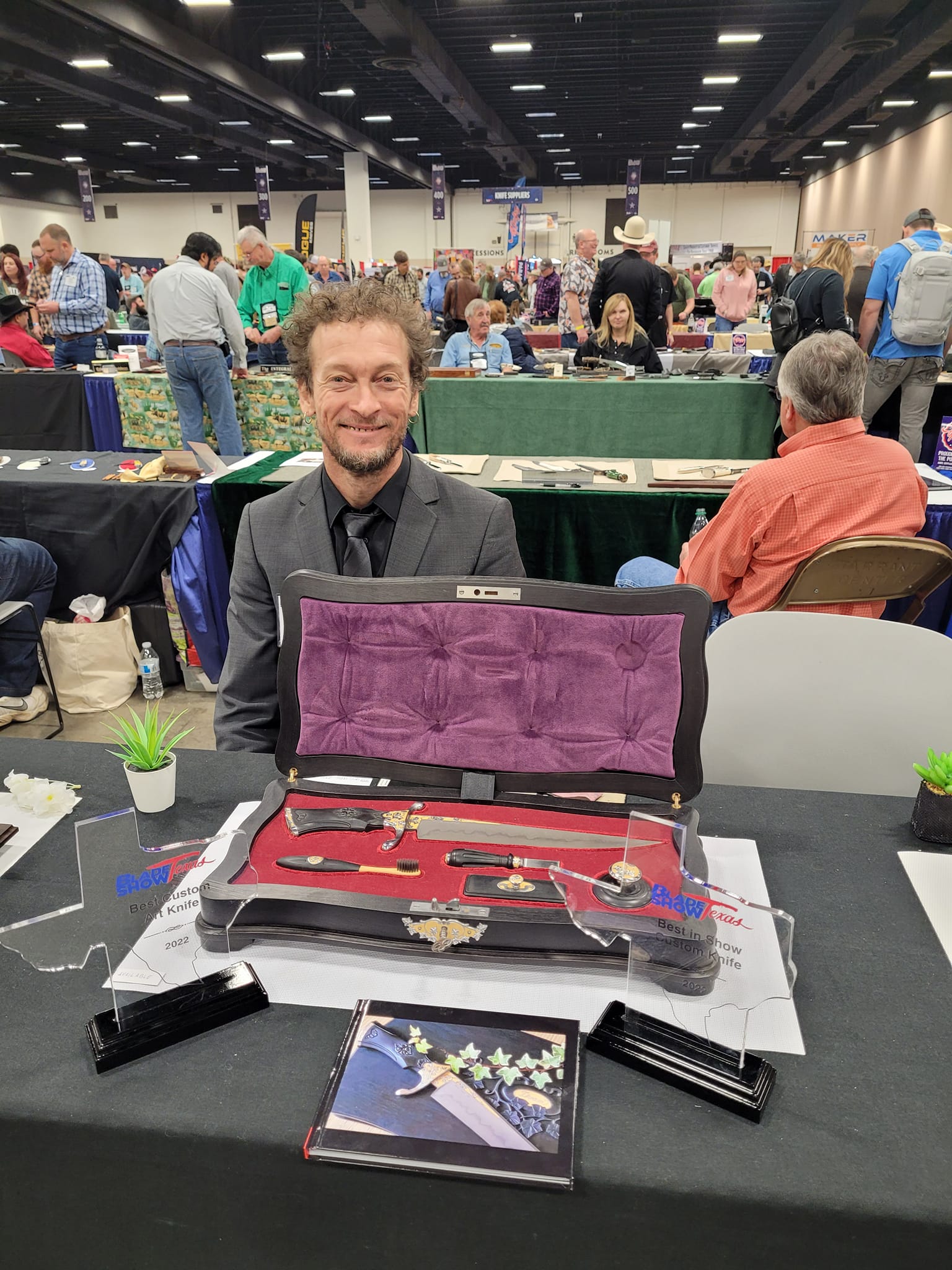 IWA
The annual German IWA OutdoorClassics is Europe's largest trade fair for (factory) knives. Hall five of the Nuremberg Messe is almost exclusively dedicated to knife manufacturers. That was also the case this year, except that hall five was almost deserted with a large number of empty spaces. Still, there are some interesting knife news to report. 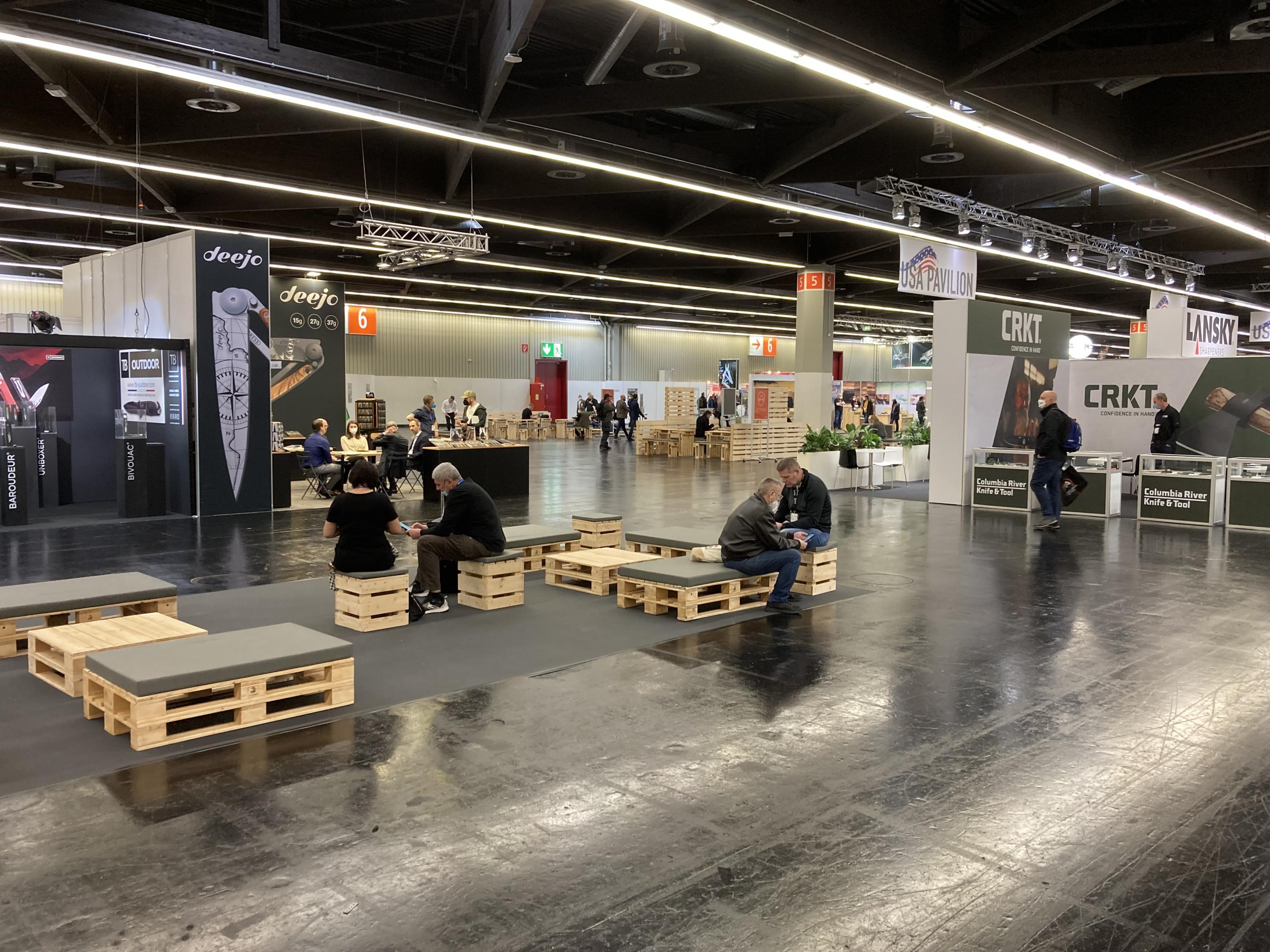 During the IWA, hall five of the Nuremberg Messe is normally filled with knife-makers' stands.
This year it was almost deserted.

Fox Saturn
The Fox Saturn, designed by Denis Simonutti, is a remarkable combination of form, function and materials. In terms of shape, it is an almost symmetrical dagger, but with a folding blade. The mechanism is based on the Fox Radius, also designed by Simonutti. The patented Radius Lock is operated by moving the cam through the semi-circular opening in the upper part of the handle. To unlock, the cam must be pushed down and moved in the opposite direction. The version of the Saturn shown here has a titanium handle with black PVD coating and a San Mai blade made from C70 with a copper strip.

Eastwood Tiger Titan
The Fox Eastwood Tiger is a design by Dutch knife maker Gudy van Poppel. The framelock folding knife has a 95 mm blade made from CPM S-90V steel. The version shown here has titanium handles with a Carbon Fiber insert. The Eastwood Tiger has a tip-up carry clip and comes with a leather pouch.

Sandrin Knives
Sandrin was supposed to have shared a stand at the IWA with American Cabot Guns, with whom the Italians work closely. Cabot did not show up, however, and so all the attention was on Sandrin knives, including their Torino. The Torino has a Recoil Lock, designed by Sneecx Tan. To unlock the blade, the backspacer must be pulled back, against the pressure of a spring. When the knife is opened, the spring pushes the backspacer forward so that it locks the blade. The 75 mm blade of the Torino is made of Polyhedral Tungsten Carbide (PTC) with a rough finish caused by grinding with fine diamonds.

Pohl Force Compact One and Two
The Pohl Force Compact One and Two are, as the name suggests, handy knives for everyday use. The Compact One has an 88 mm long Bowie blade of up to 6 mm thick, made from D2 steel with a stonewash finish. The handle is stocky and has G10 scales. The recesses at the transition between grip and blade serve as an aid to positioning the index finger and thumb.
The Compact Two has an 86 mm spearpoint blade, also up to 6 mm thick and also made of D2. Both models are available in stonewash or with a black TiN finish, and both come with a Kydex sheath. 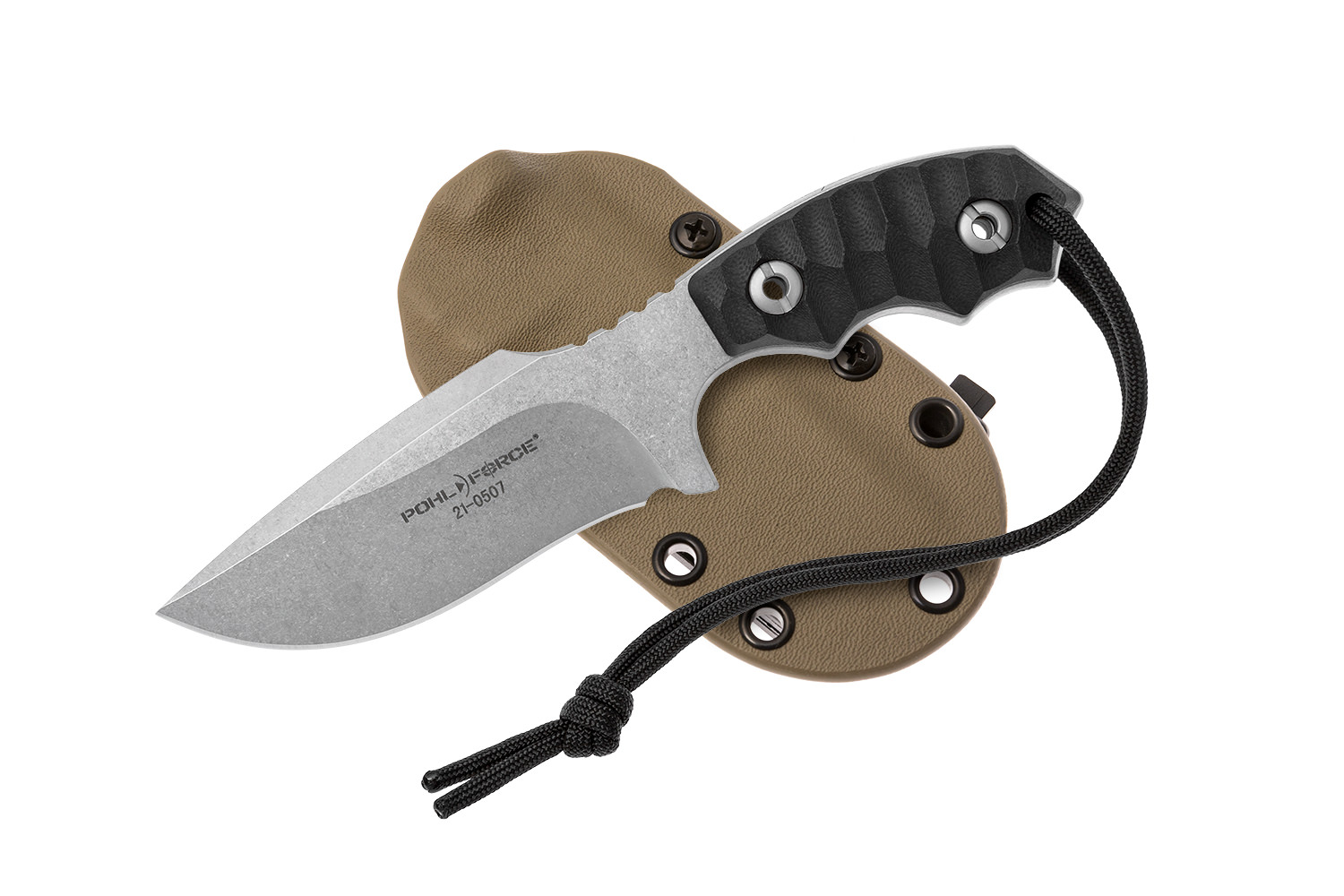 Pohl Force Mike Seven
The Pohl Force Mike Seven was introduced in 2013. Now there is a luxury version, the Mike Seven Flamed Ti. The knife has a ten centimetre long and four mm thick spear point blade made from CPM S35VN steel, with a two-tone finish. The handle is flamed titanium with Canvas Composite grip plates. The solid pocket clip is also titanium.

Böker Damast Year Knife
The Böker Damast Year Knife 2022 is a slip joint folding knife based on the Boxer EDC by Frenchman Raphaël Durand. The annual knife has handles of 5500-year-old bog oak with copper connection pins. The 8 cm clip point blade is made from Chad Nichols damask with a Riptide motif. The edition is limited to 999 pieces. 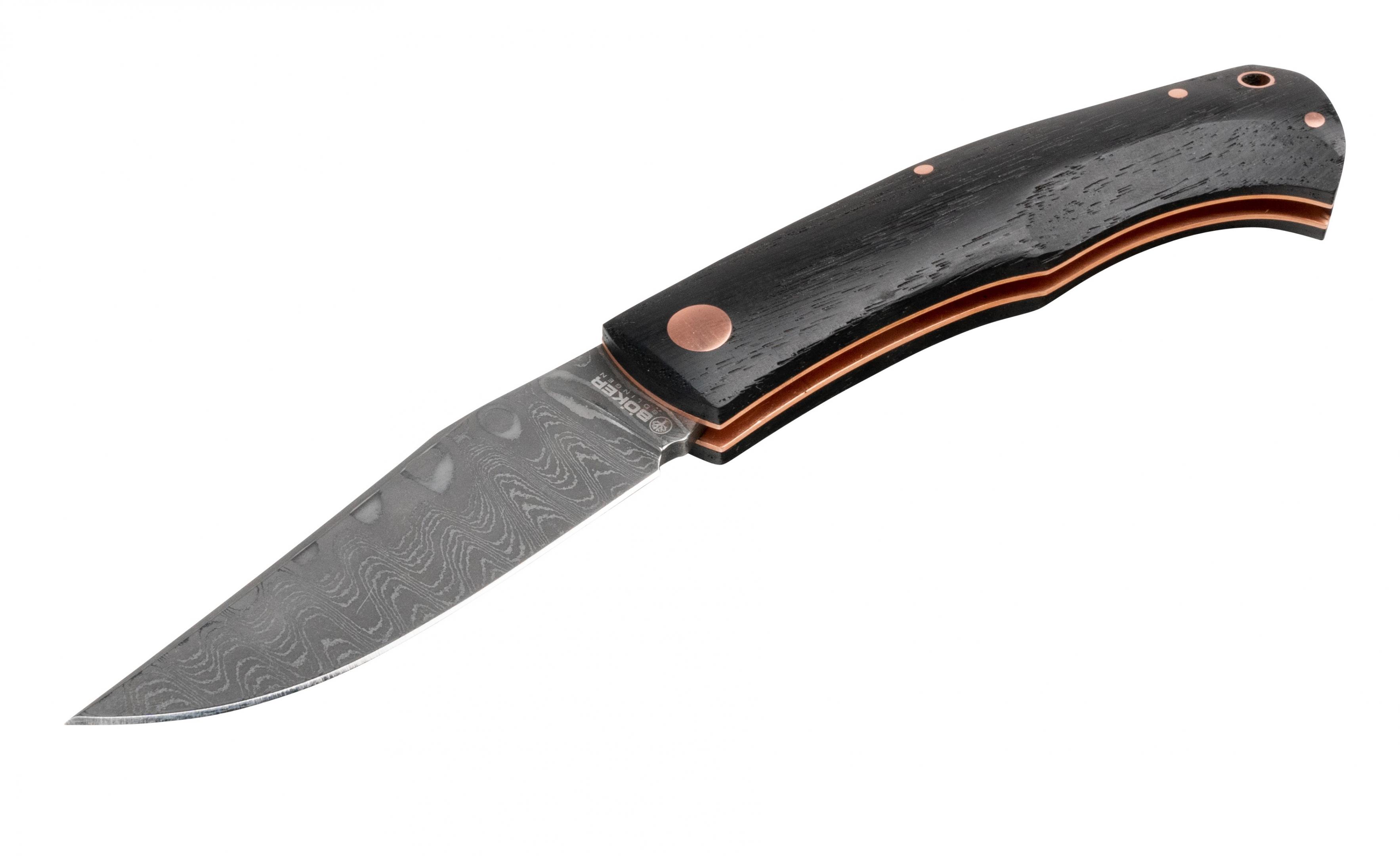 Tiger-Damask
In recent years, Böker has brought a number of knives on to the market with Damask blades, forged from historical steel. For example, steel from the wreck of the battleship Tirpitz was used. This year, a knife from Tiger-Damast will be added. The Damast steel is made from the remains of a German Tiger I tank, which was destroyed in Latvia in 1944. This seems irresponsible, as only seven examples of the Tiger I have survived. In reality, however, these are excavated lumps of steel. The Tiger Damask knife has a jute Micarta handle, a tip-up carry clip and a blade made from Chad Nichols-forged Intrepid Damask, whose pattern is reminiscent of the track of the Tiger tank. 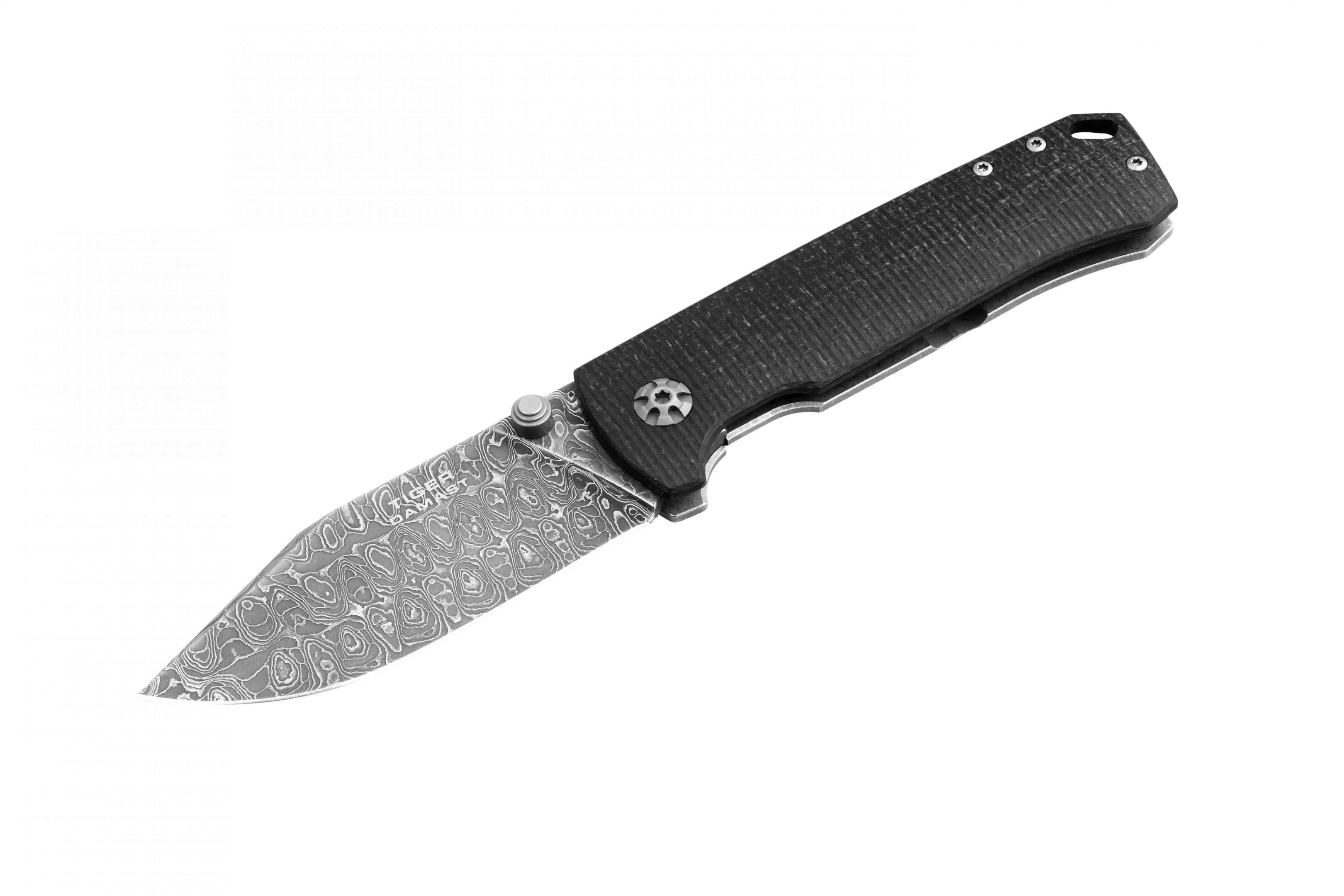 Böker Daily Knives
Böker Daily Knives is a project by German knife maker Alex Kremer and Daily Customs. Kremer designed the AK1, a utility knife, with a 76 mm blade made of RWL 34. The handles are easily interchangeable and the carrying loop at the back of the handle is a separate component that can also be turned around so that it disappears completely into the handle. The AK1 is manufactured with a either a drop point blade or a reverse Tanto, and with grips of Grenadilla or Carbon Fiber. 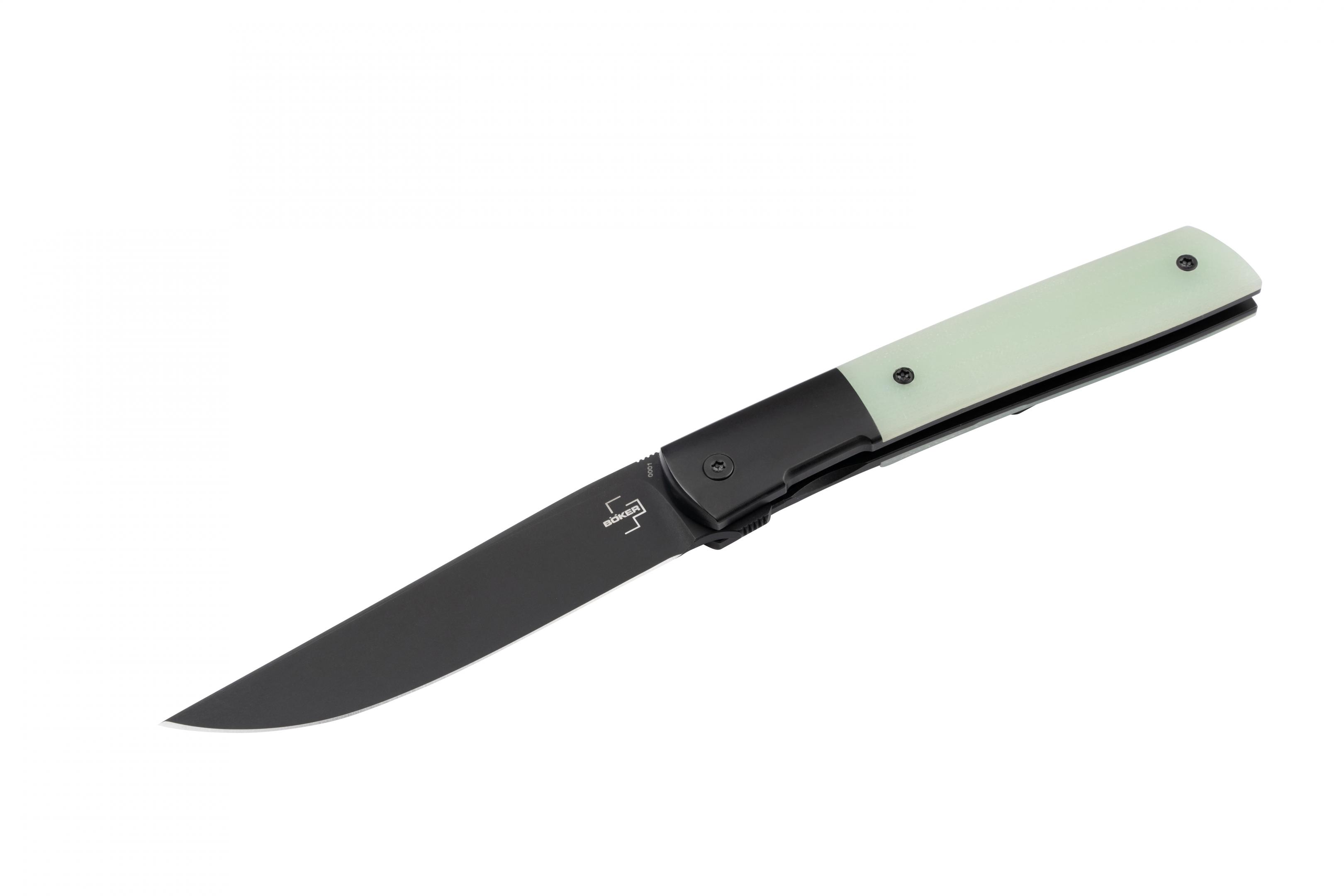 Lionsteel B40
The Lionsteel B40 is a bushcraft knife designed by Moletta with a 103 mm blade made of Sleipner steel. The handle is optionally available in Santos or Olive wood, Micarta, or G10. With the latter, there is a choice between black and orange. In all cases, there is a leather sheath. The back of the tongs can be used as a firesteel, with the knife in the sheath. The total length of the knife is 223 mm, the weight is 202 grams.

Lionsteel bestMAN
The English term "best man" can be explained as master of ceremonies, but has a more personal connotation. The "best man" is a confidant of the groom, which makes it a nice name for a pocket knife. The Lionsteel BestMan is a slipjoint with two blades, a clip point of 71 mm and a Wharncliffe of 65 mm, both made of M390 steel. They are secured in a handle with titanium bolsters, and scales of Santos or Olive Wood, Canvas Micarta, Ebony or Carbon Fiber. The bestMan is also available with only a clip point or drop point blade. 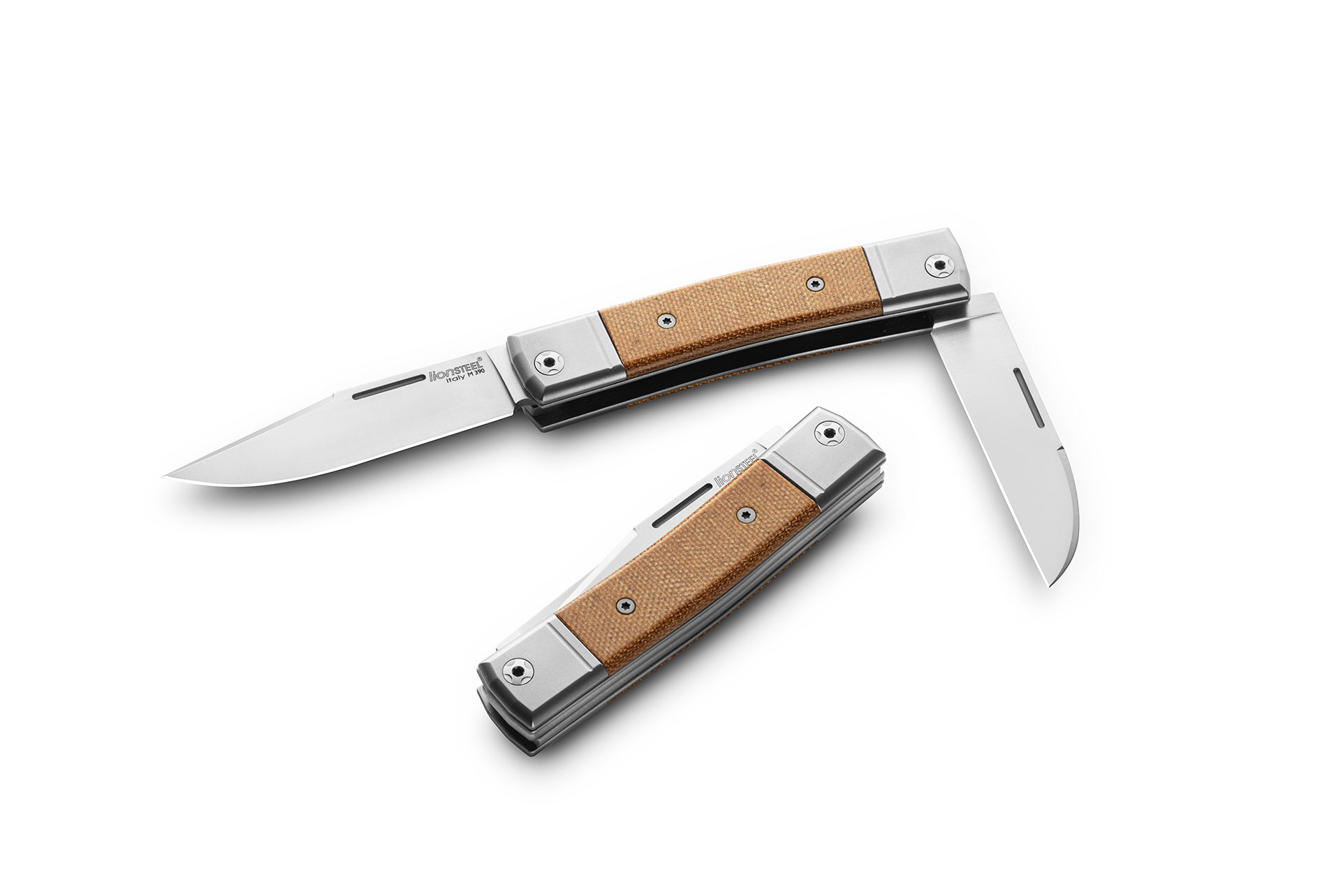 Tuya Knife
Tuya Knife is a small Chinese knife manufacturer, represented in Europe by the German company WTF, which stands for Writing Turning Flipping. WTF takes care of designs, specifications, supervision and sales. One of the WTF/Tuya productions is the Martin Annegarn Street Legal, by Dutch knife maker Martin Annegarn. It is an unlocked knife, with a double detent, making it easy to open but not easy to close. The 67 mm blade is from Böhler M390 steel, the handles are from Desert Ironwood. Through our colleagues at the German knife magazine Messermagazin, the knife was awarded the 2022 Annual Prize. 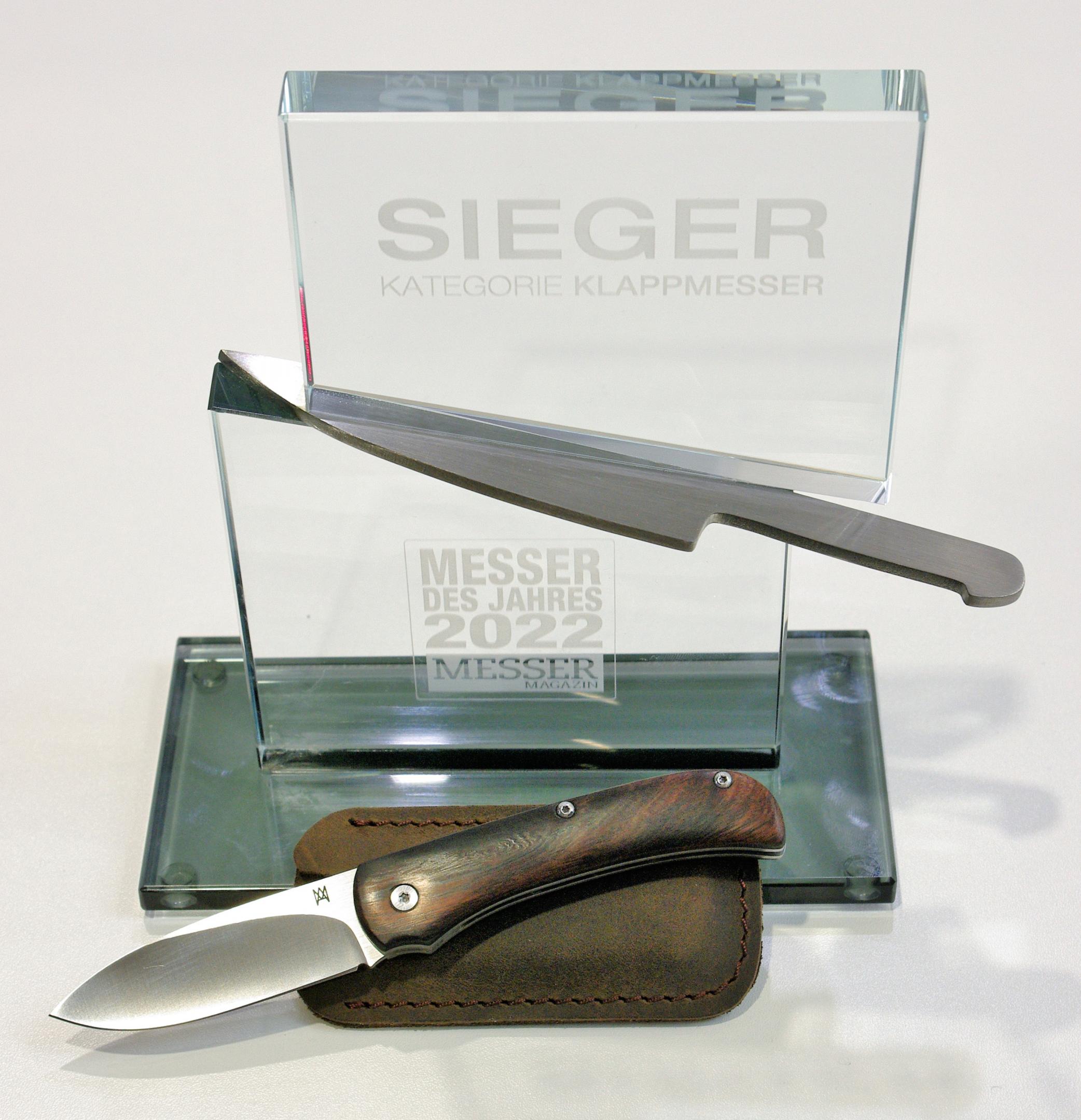 Wildsteer
The Wildsteer TORK-SR (Survival Rescue) is designed for the aircrews of the French Army Light Aviation, mainly helicopter crews. The name is derived from the English word 'Torque'. The knife has a 133 mm blade of 14C28N and weighs 260 grams. It is supplied with a M.O.L.L.E. sheath with a fire steel and Diamond sharpener.

Umarex
Umarex has taken a look at its range of knives and upgraded the materials used. The majority of Walther folding knives are now made with a blade of D2 tool steel, instead of 440. One of the new models is the Q5 Steel Frame Folder, a framelock folding knife with FNR inserts in the handles with the honeycomb pattern of the Walther Q5 Steel Frame pistol. The steel parts of the handle and the 90 mm blade have a so-called Blackwash finish.

Viper Hug
The Italian Viper Technocut is known for its fine gentlemen's knives. The range is extended with the 'Hug'. This is a slip joint folding knife with a 71 mm sheepsfoot blade made from M390 steel. There are different handle materials. Pictured is the Hug Titanium CF Marble Blue Two bolsters. As the name suggests, it has a titanium handle with two bolsters and Blue Marble Carbon Fiber scales. 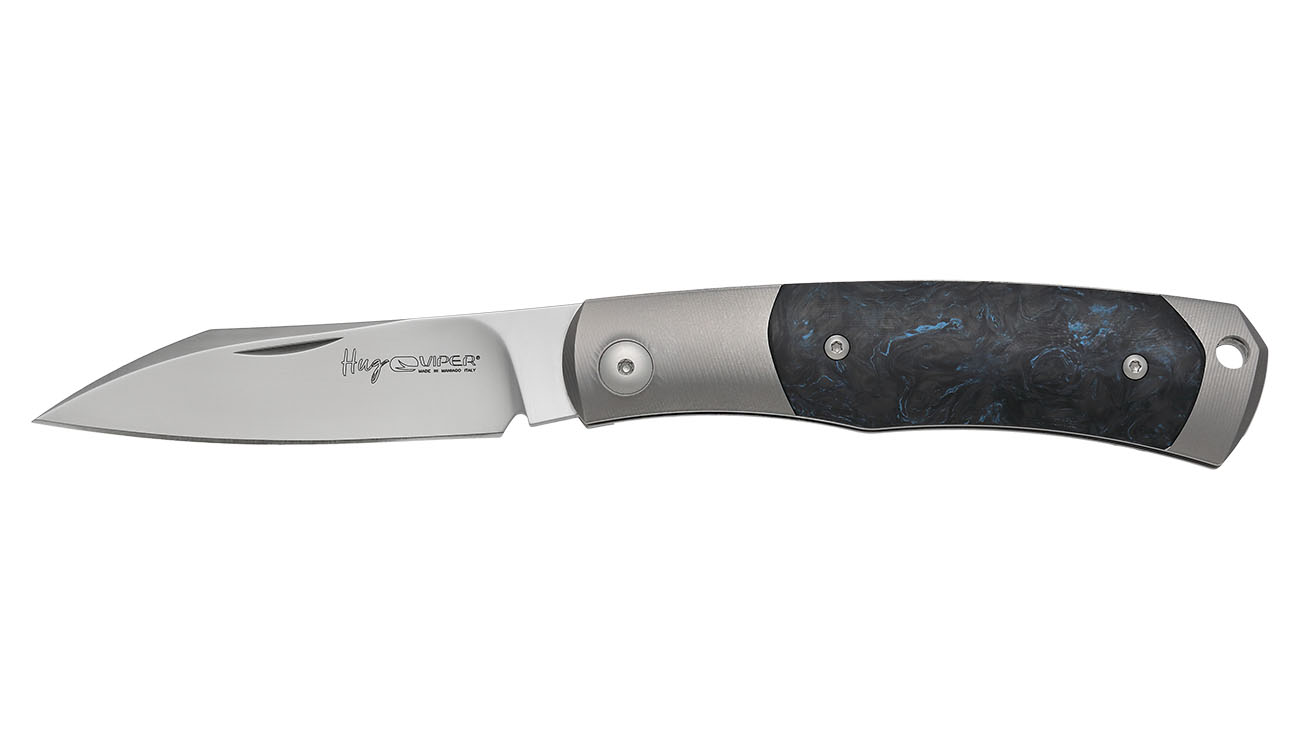