Since the beginning of this year, almost all the familiar names in the line-up of European knife shows have returned. Some as before, some in a different format, like the knife show in Solingen. As KNIFE 2022, the first edition united both artisan knife makers and the industry. The new format has been quite successful.
Text and pictures: Bas Martens 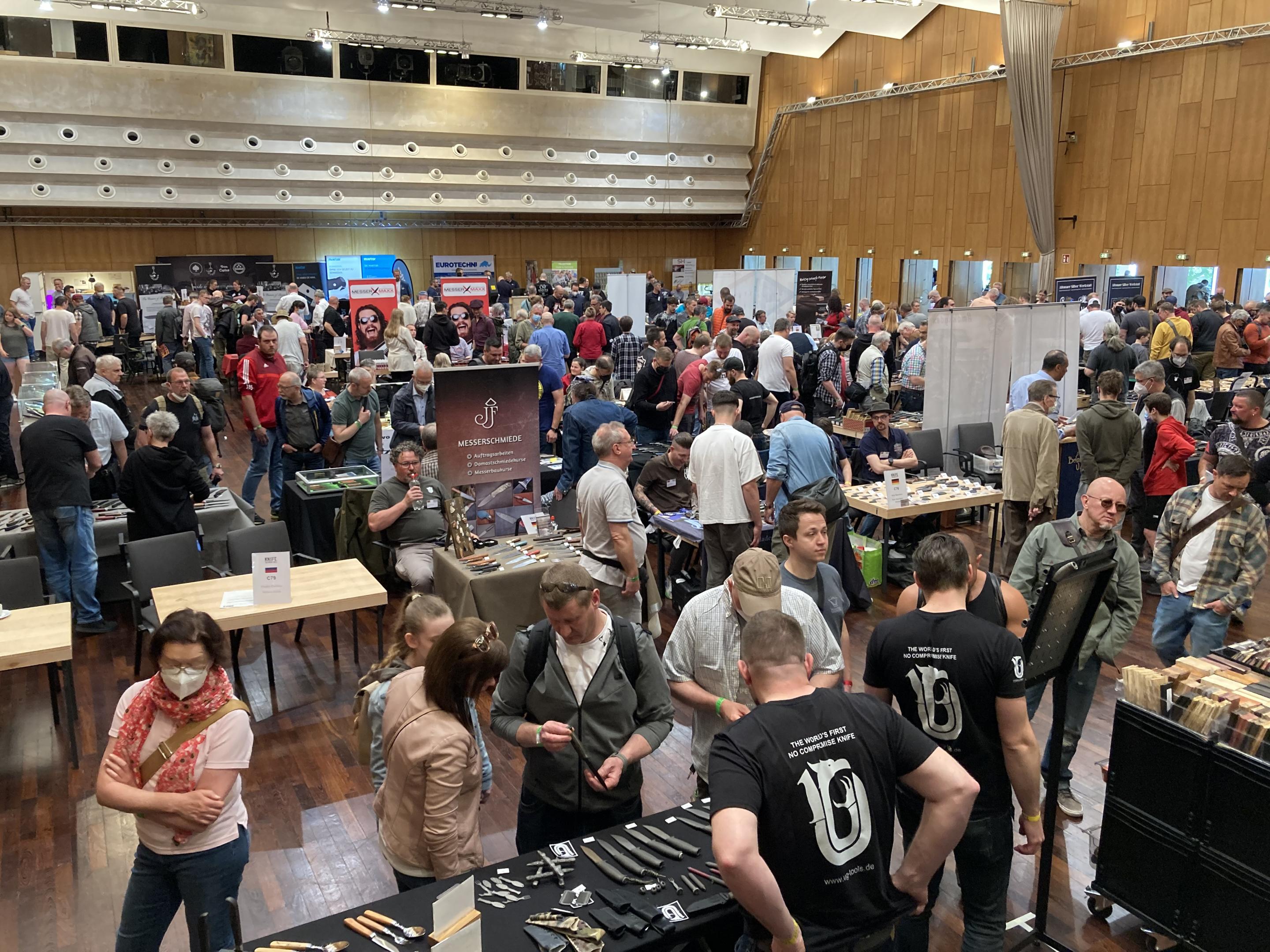 Part of the Concert Hall during KNIFE 2022 in Solingen.
Solingen is a big name in the blade world. Because of its still rich and diverse industry, because of the wonderful Deutsches Klingen Museum (the German Blade Museum, which will be even more impressive after its refurbishment) and because of the annual show of the Deutsche Messermacher Gilde (German knife makers guild).
That show was held for the last time in 2018, because the location - the Blade Museum - was no longer suitable. An alternative was sought and a new, broader-based show was planned for May 2020: "Knife 2020. The Solingen Blade Fair". And then came COVID. Knife 2020 was cancelled, and there was no knife show in 2021 either.
Needless to say, expectations were high when KNIFE 2022 was announced. A joint venture between the Deutsche Messermacher Gilde, the Deutsches Klingen Museum, the Solingen city council, and the Industrieverband Schneid- und Haushaltwaren (the Solingen blade industry) with an entirely new location: would that work?
We visited the show on 14 and 15 May this year, and as far as we are concerned the answer is a resounding yes. It is impressive what the various parties have managed to do. Almost 150 exhibitors and two thousand visitors are a wonderful result. "Solingen” is not only back, but also has everything it takes to continue growing. 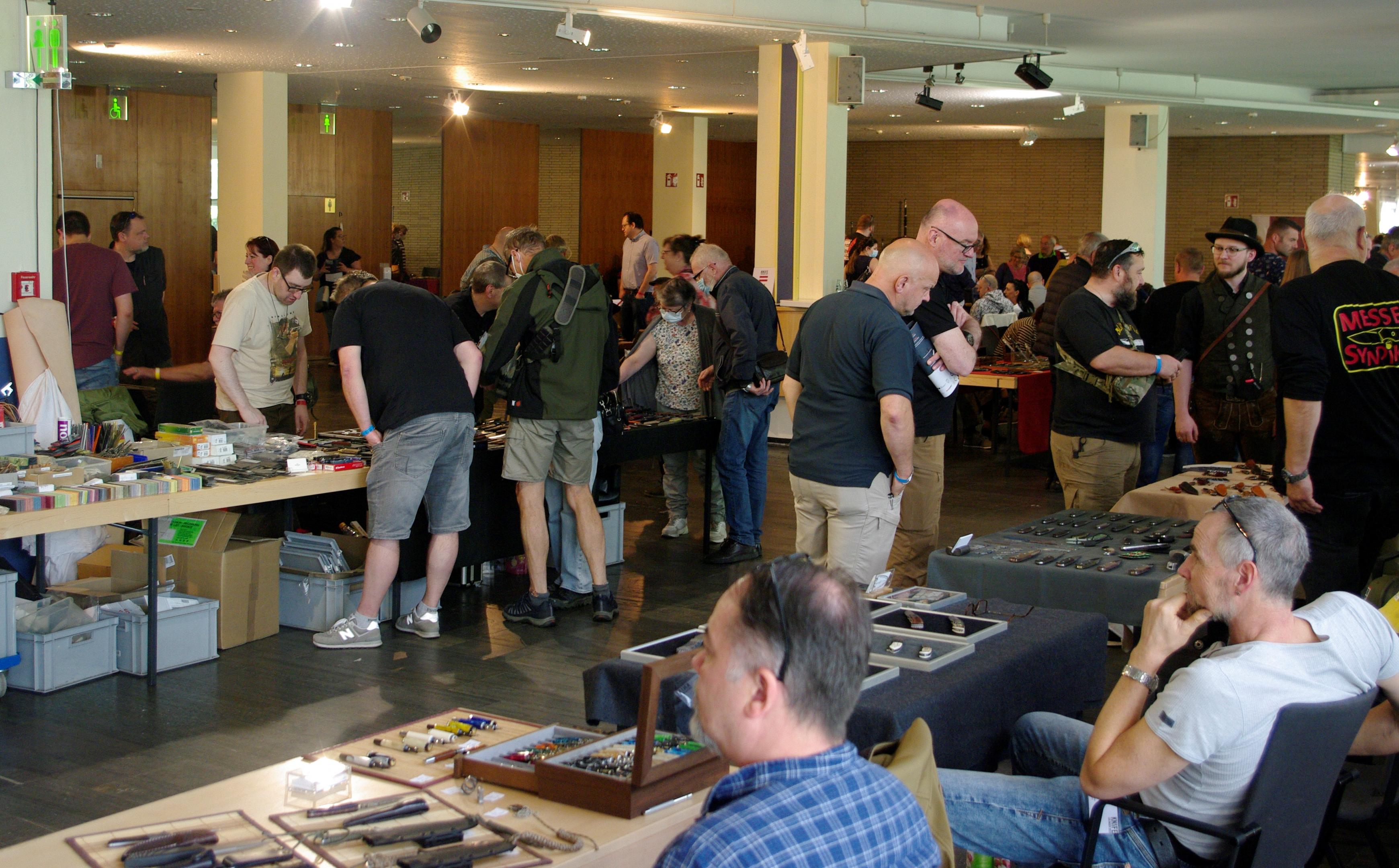 The ground floor was mainly reserved for the members of the German Knife Makers Guild.

A tribute to the Ukrainian knife makers that could not be present.
Concert Hall
The new venue for KNIFE 2022 is the Solingen Theatre and Concert Hall, of which three parts were used: the ground floor, the upper foyer and the concert hall itself. The ground floor was reserved for the members of the German knife makers guild whereas the concert hall and the annexed upper foyer had a mix of international knife makers, and companies providing tools and materials. A Knife Guide with the floor plan and list of exhibitors facilitated the search. The tables were well-spaced, and easily accessible. The Theatre and Concert Hall also has plenty of room for expansion.
Besides the actual fair, there was an extensive programme: fencing demonstration and fencing for kids, demonstrations of medieval sword fighting, demonstrations of professional cutting in the kitchen, and the possibility to have a professional shave. In the Klingen Museum there were forging demonstrations with the possibility of visitors to participate, demonstrations in the Historic Pewter Workshop, and guided tours. In addition, Drop-Forge Museum Hendrichs and Schleiferei Wipperkotten (Solingen's last original grinding shop) were open to the public. 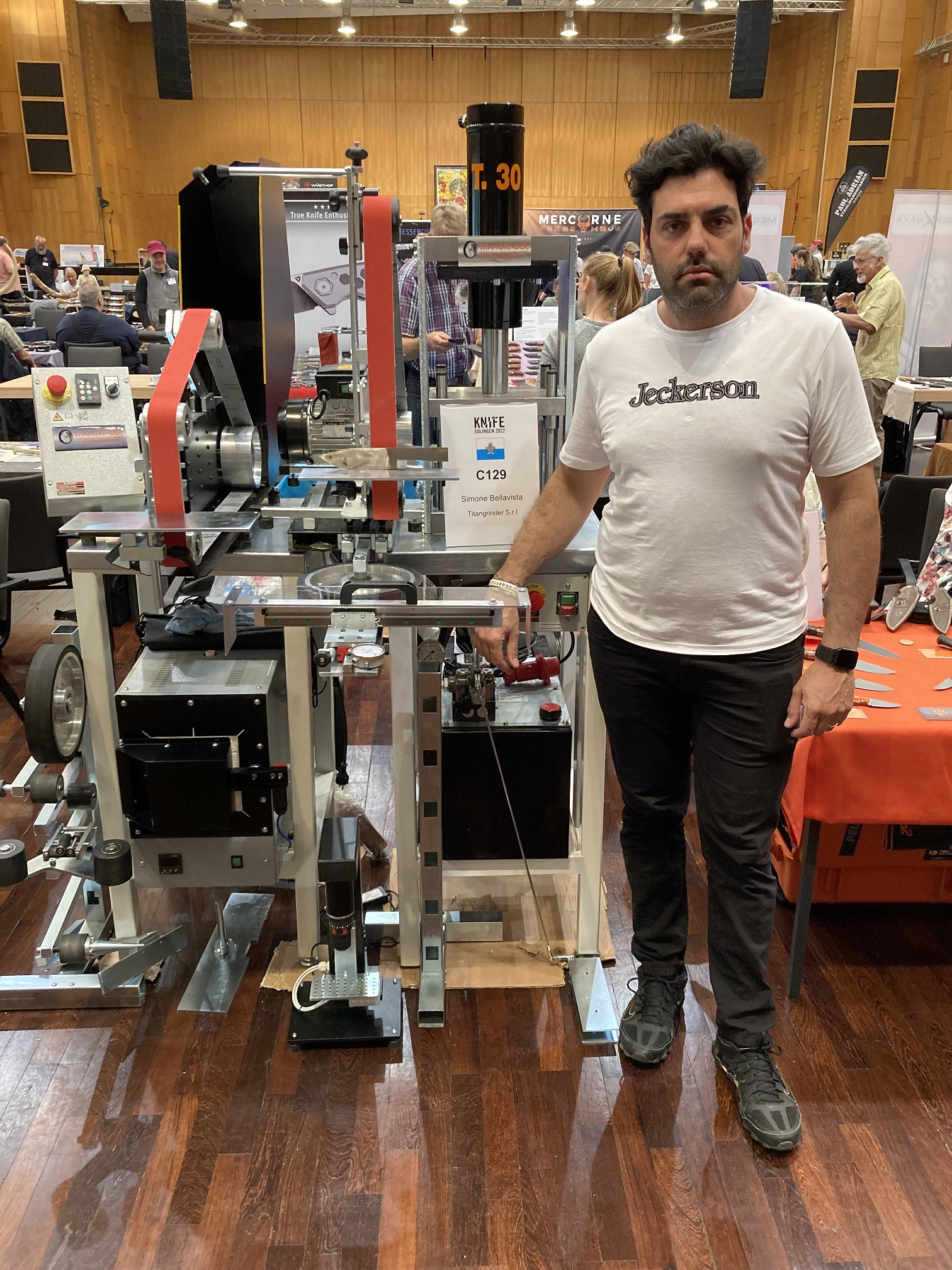 Left: Simone Bellavista from the Titangrinder company, supplier of professional tools for knife makers.
Right: Shesher the Barber provided a professional shave.
The next pages show a small part of the exhibited knives, followed by the entries for the Knife Award 2022, with the theme "Myth of the Bowie Knife".
As far as the organisers are concerned (and, equally important, the exhibitors we asked as well) Solingen is back in a big way. The dates for the next two years have already been set. KNIFE 2023 will be held on 6 and 67 May, KNIFE 2024 on 11 and 12 May. 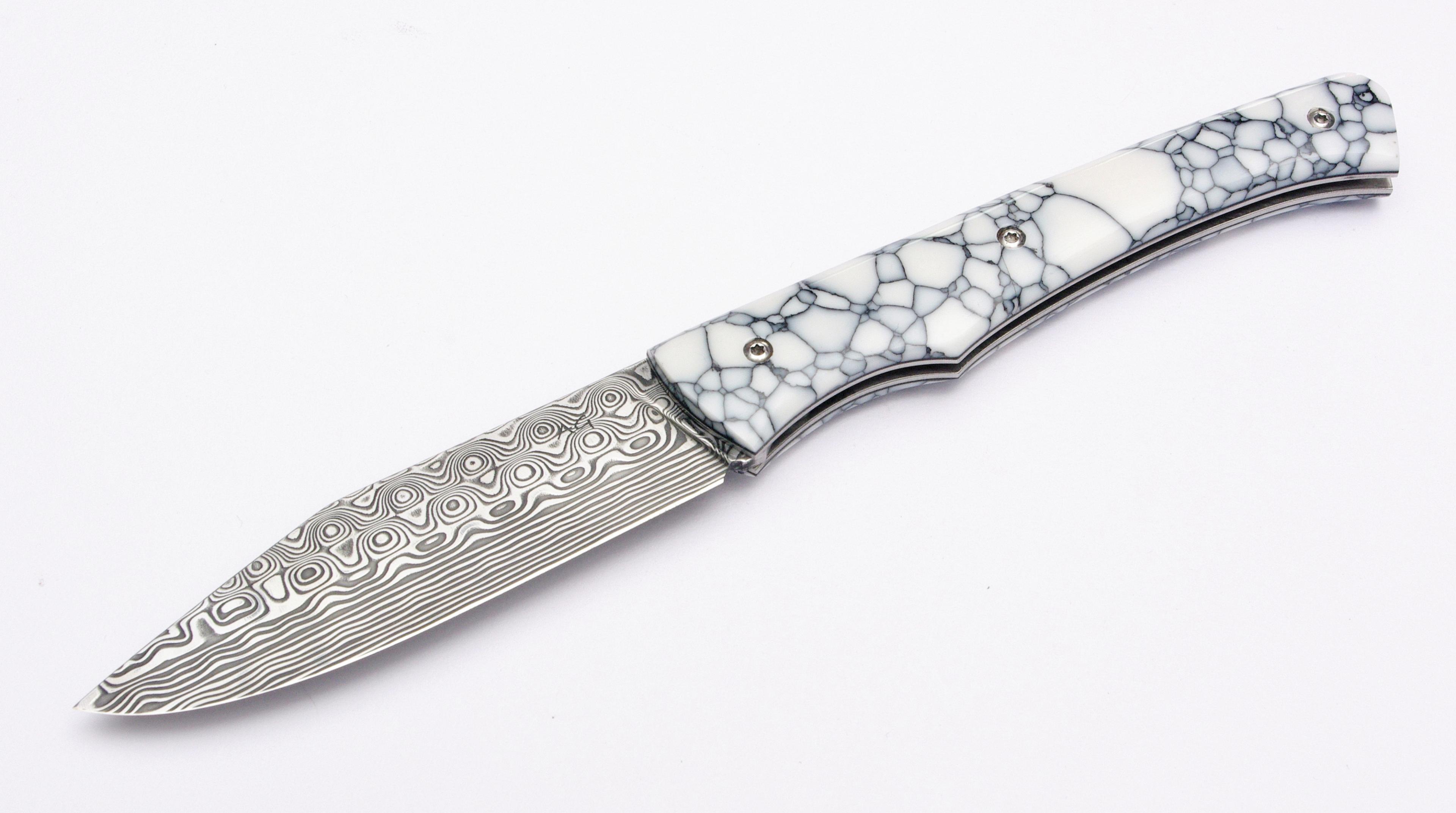 The “Tedesco” by French knife maker Adrien Giovaninetti. The blade is Damasteel, the handle material is
reconstituted stone. 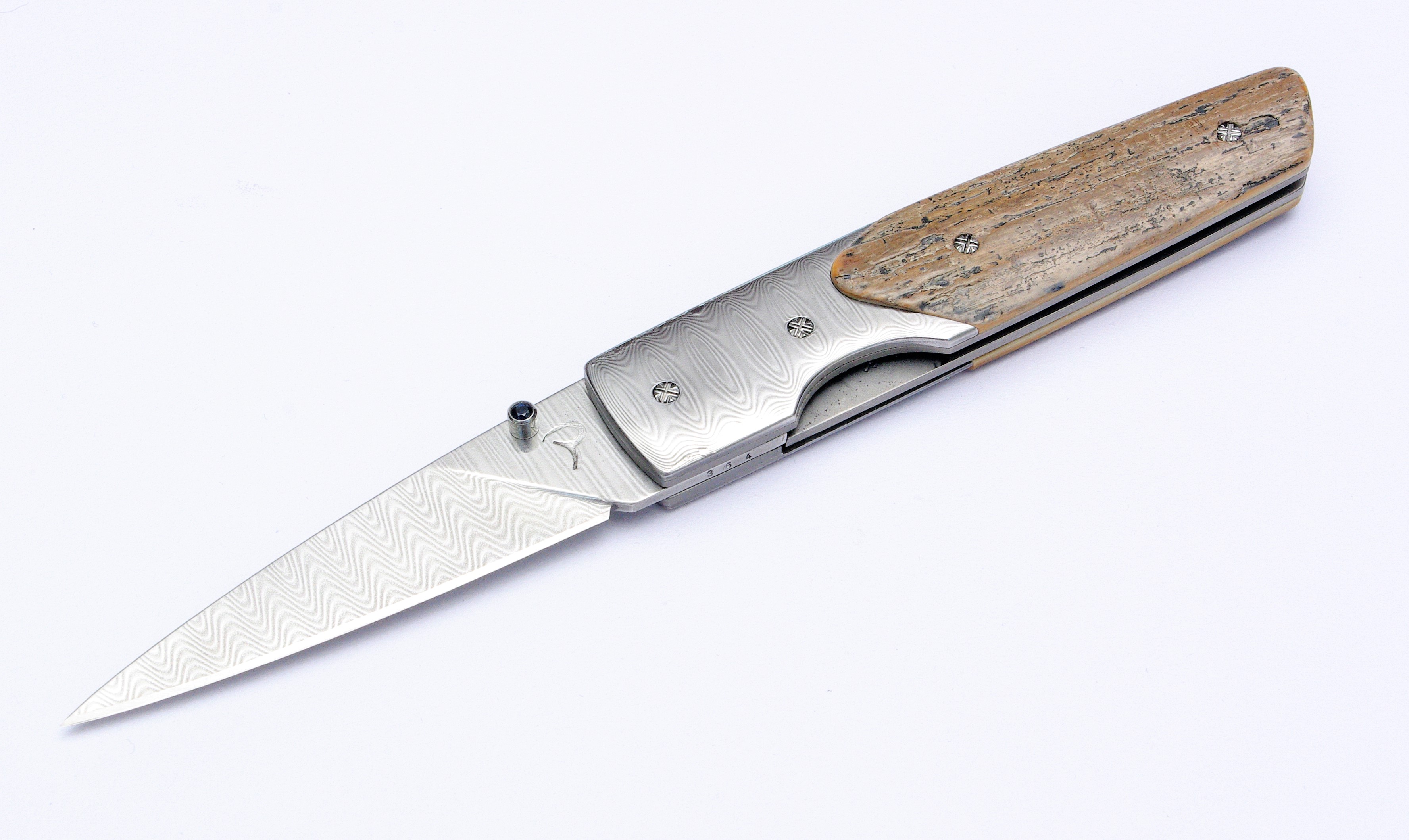 “Nr. 364”, a linerlock folding knife by André Perret from Switzerland. The blade is Ballbach damask, the
handle is Mammoth and Titanium. The thumb stud has a Sapphire. 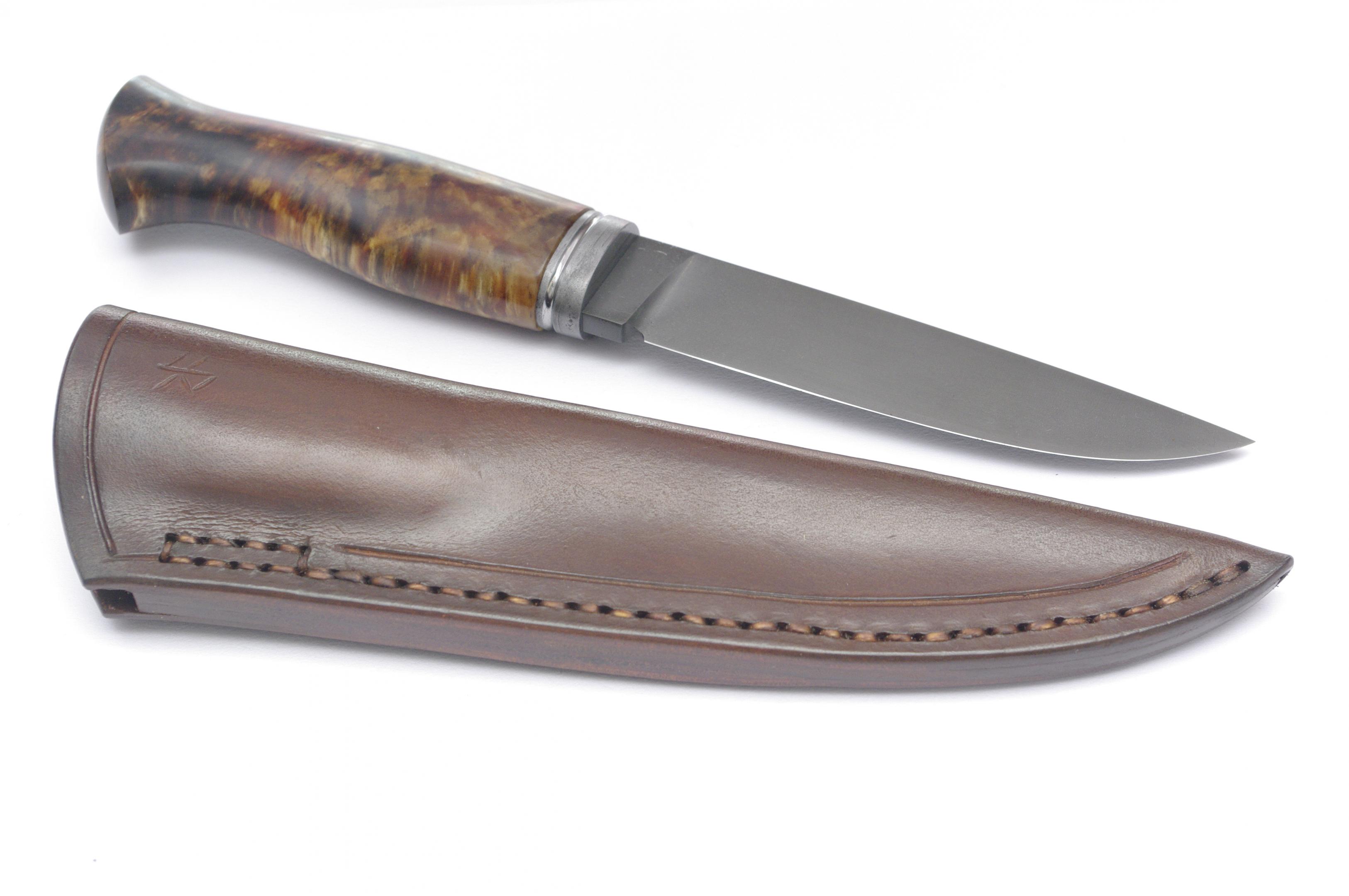 A hunting knife by Andreas Schweikert. The blade is G Forge M1 steel with a wootz pattern. The handle
material is stabilised Wild Service Tree.

A friction folder by Armin Drumm. The 8cm blade is made from 1.2842 and Böhler TWR, the
handle material is blue stabilised Maple. The overall length is 17cm when opened.

A Kwaiken by Attila Kertész. The blade is D2 steel, the handle material is Mammoth Ivory. The engravings
on the bolsters were done by Árva Edmond with inlays of 24 carat Yellow Gold, Green Gold, Silvers and
Red Copper.

The ‘Lanzette” (Lancet) by German maker Wolfhard Sollorz. Thea blade is Damasteel, the handle is
Damasteel, Silver and Mammoth. The sheath is stainless steel and Mammoth, with a micro-fibre insert.
Overall length of the dagger is 266 mm. 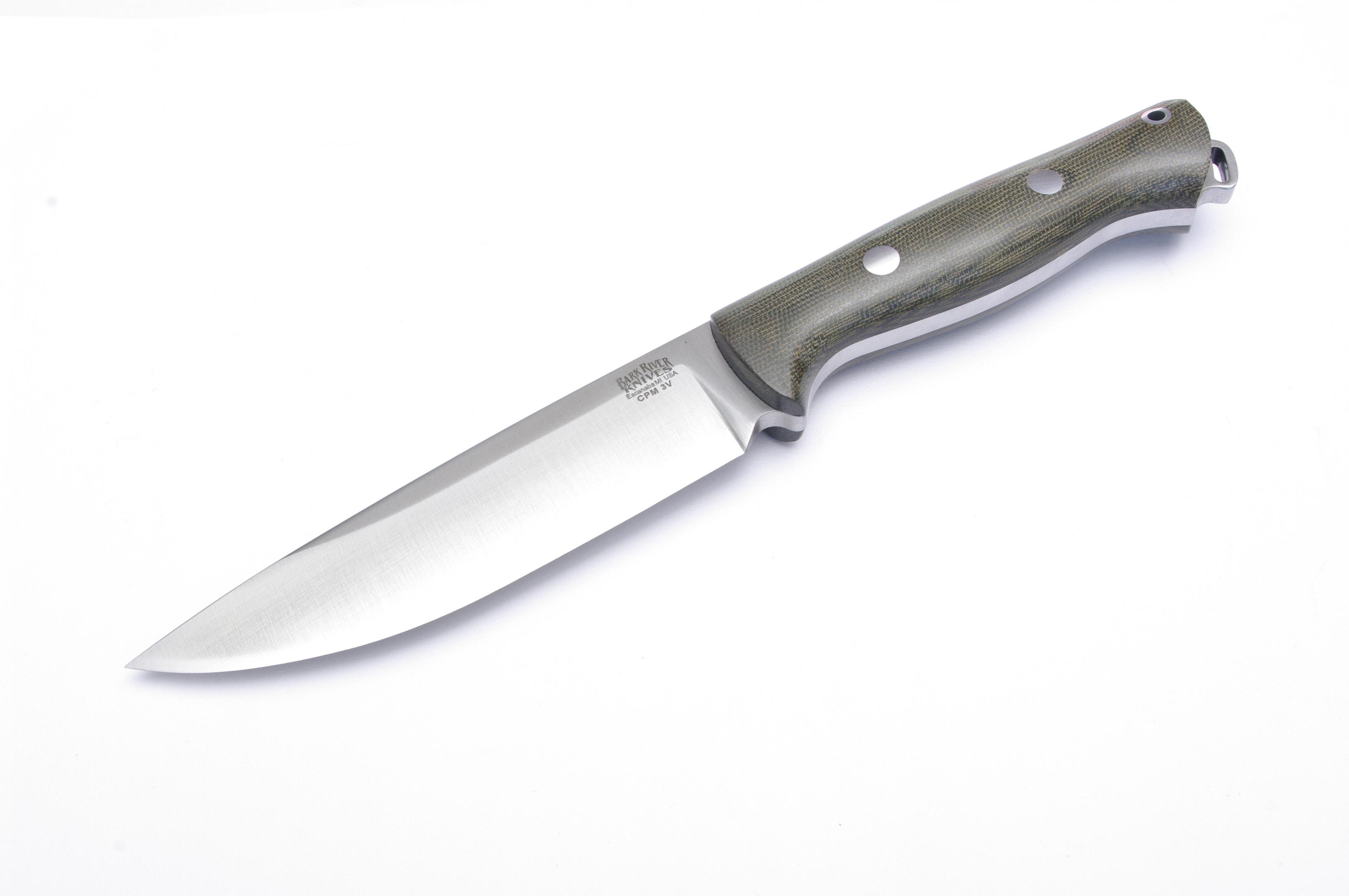 German company Klingenwelt is the importer of – among others – Bark River. One of their models is the
Bravo Vortex green canvas. The steel is CPM-3V, the handle scales are green canvas Micarta. 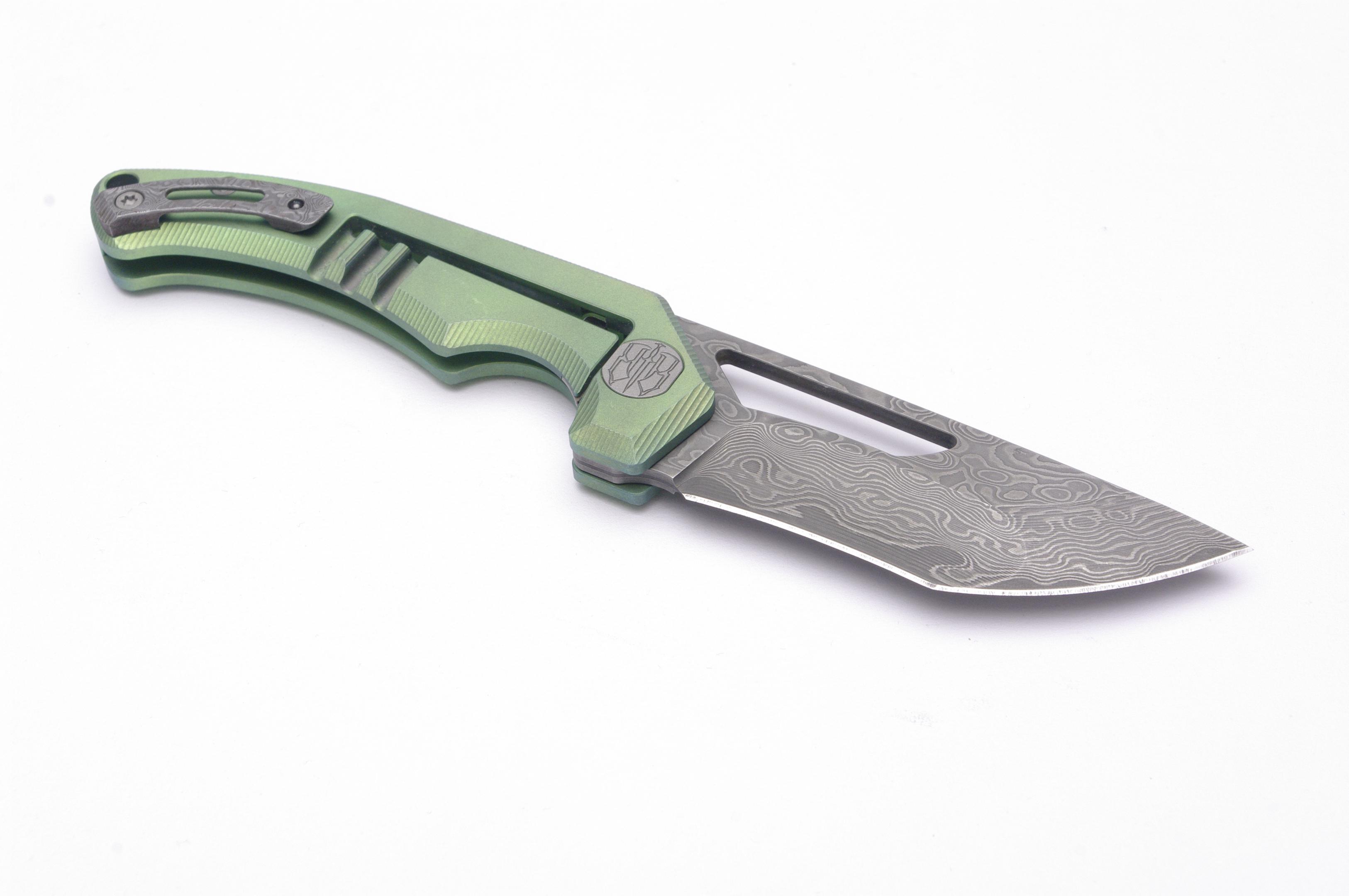 The “Sailor” by Croatian knife maker Denis Budak, a tribute to the knife used by Croatian sailors. The
blade is stainless Damask, the bolsters are Damask and the handle material is Vintage Ivory Micarta.
The Damask inlay is Budak’s design of a anchor and cross, to keep you safe on sea and land. 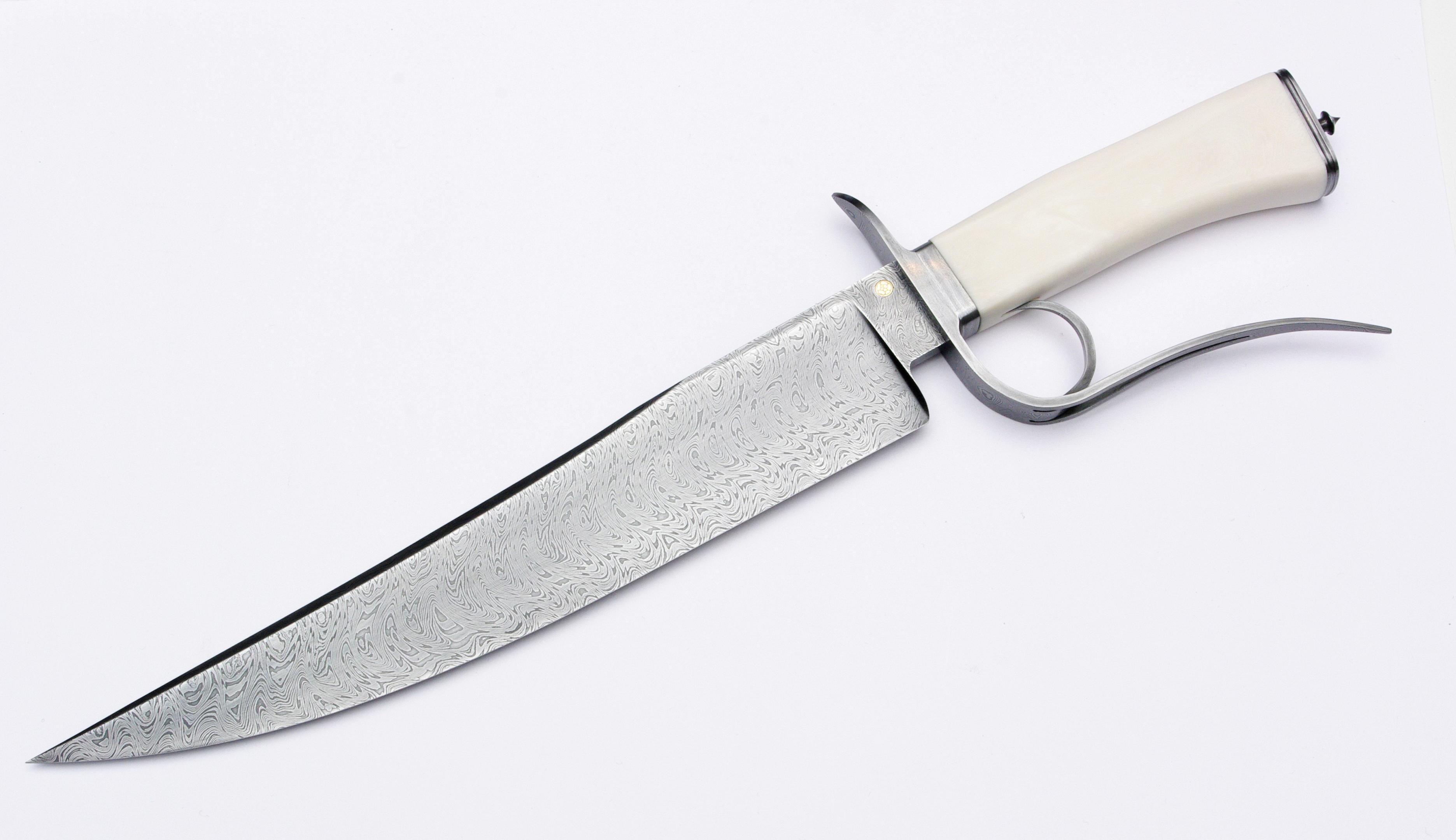 A fixed blade by Derrick Wulf. The blade is four-bar Turkish twisted W’s of O2 and 75Ni8. The handle is
Bog Oak with a Bronze spacer and a stainless steel guard.

A hunting knife by German maker Dirk Rönnau. The blade is Damacore, the handle material is Bronze,
Nickel Silver and stabilised Maple. 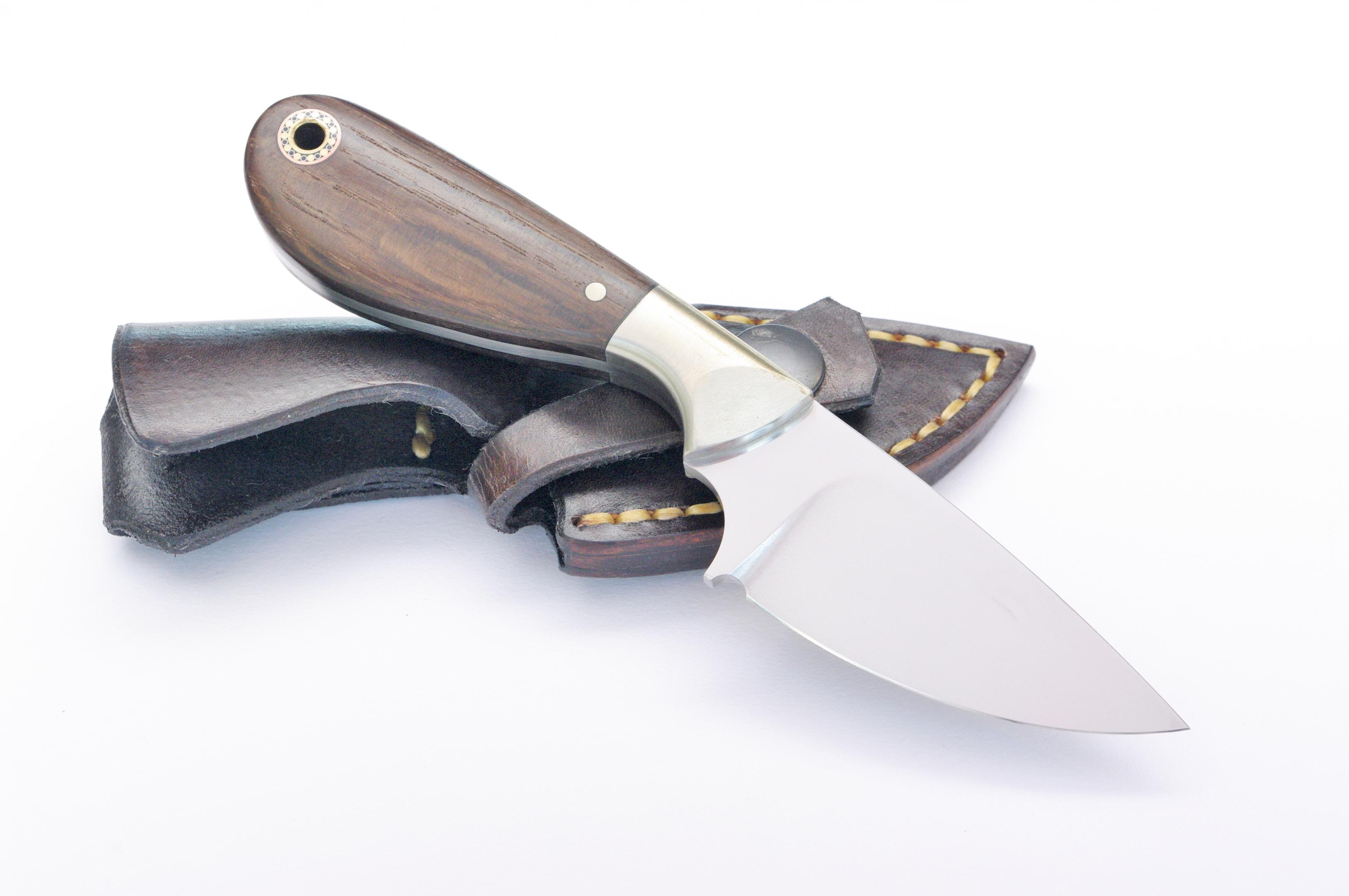 Erich Niemeier, president of the German Knifemakers’ Guild, presented this hunting knife.
It has a 7cm blade from Böhler N630 steel. The bolsters are Nickel Silver and the handle
is Bog Oak. Overall length is 16cm. 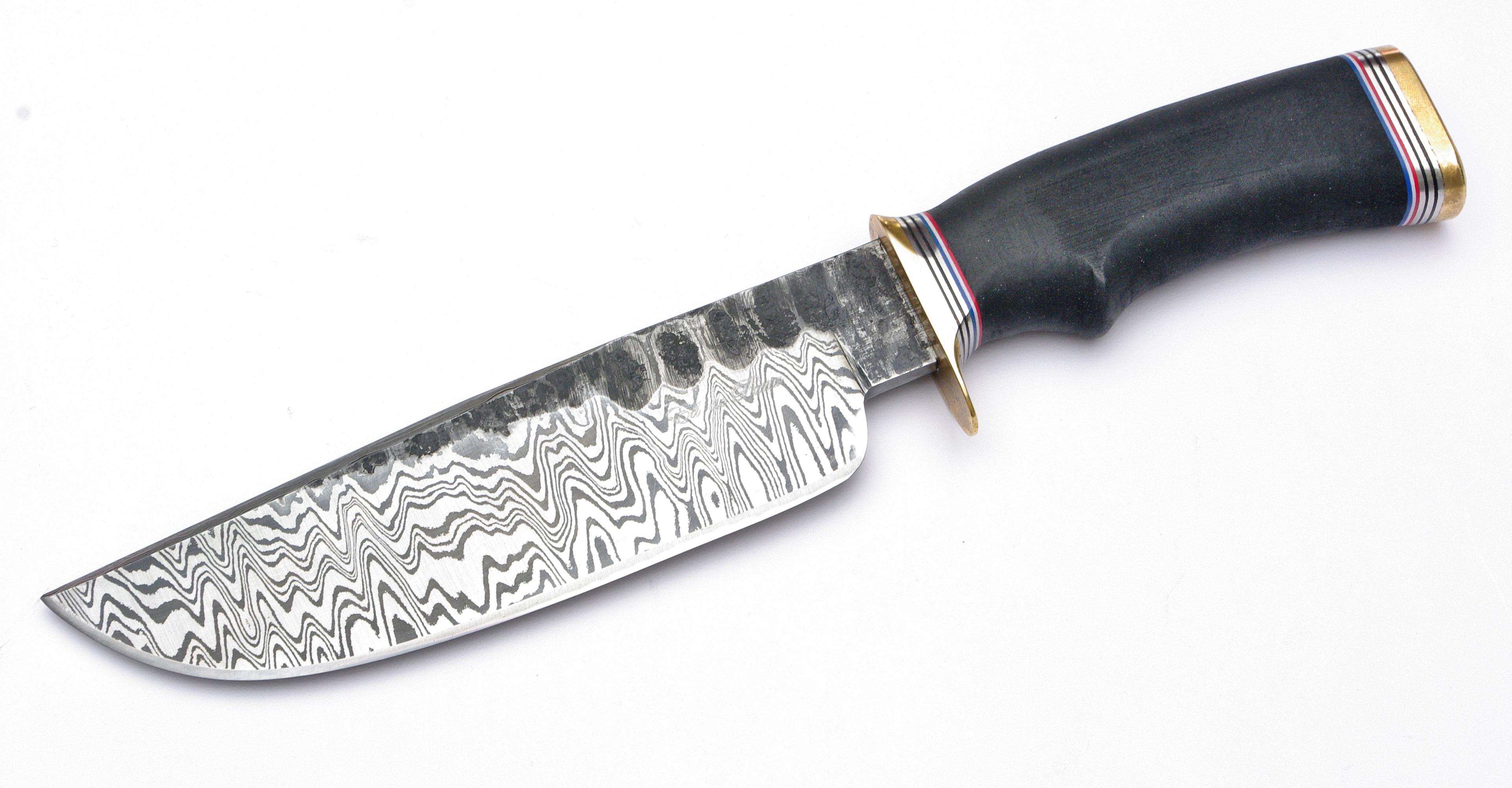 The “Persian” by Dutch knife maker Erik Markman. The 25cm blade is )2 and 75Ni8 Damask, the handle
is Maple. The design was inspired by Persian knives in the collection of the Solingen Blades Museum. 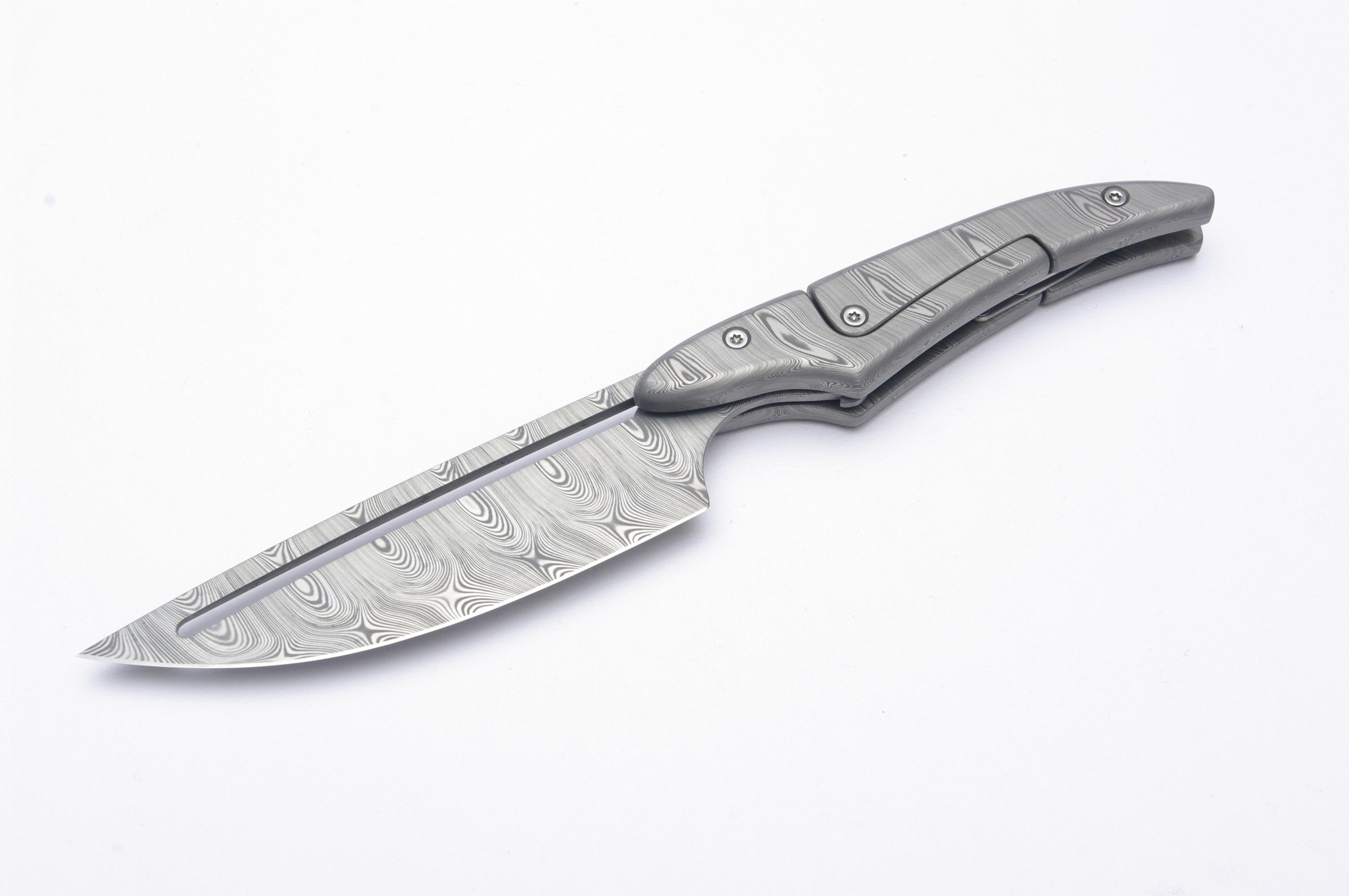 German knife maker Gunther Löbach presented his “Shapeshifter EDC”. Both blade and handle are made
from Damasteel “Twist”. The overall length is 190 mm when opened.

The “Hunter” by Joe Pöhler. The blade is home-made Damask, the handle is Walrus tooth, Silver and
Mammoth. Overall length is 180mm.

The “Vulkan” (Volcano) by German maker Helmut Klein. The 106mm blade is Explosion Damask, the handle
material is Mammoth Molar Tooth. The overall length is 234mm. The sheath is Ostrich leather.

A linerlock folding knife by Finnish knife maker Jukka Hankala. The blade is home-made coloured Damask,
the handle is Titanium with Damask inlays. (The dark stripes on the end of the blade are reflections). 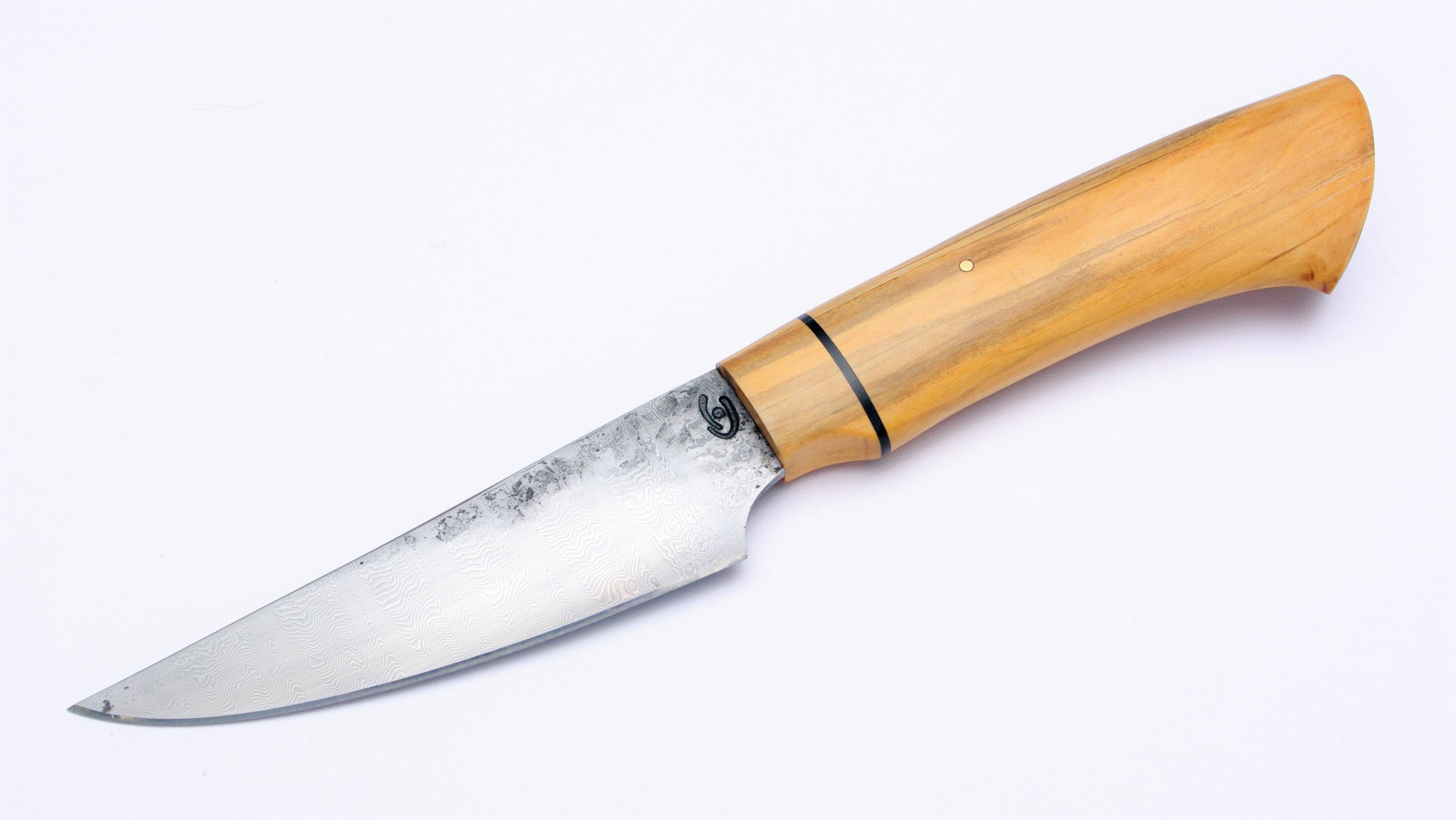 A fixed blade by Belgian knife maker Jos Wouters. The 100mm blade is Damask from Achim Wirtz, the
handle is spalted Boxwood. Overall length is 220mm.

“The Girl and the Dragon” by Hungarian maker Jószef Fazekas. The blade is 1.2842 and 75Ni8 Mosaic
Damask, the handle is Damask and Mammoth Ivory. The scrimshaw is by Jószef Faluközi. 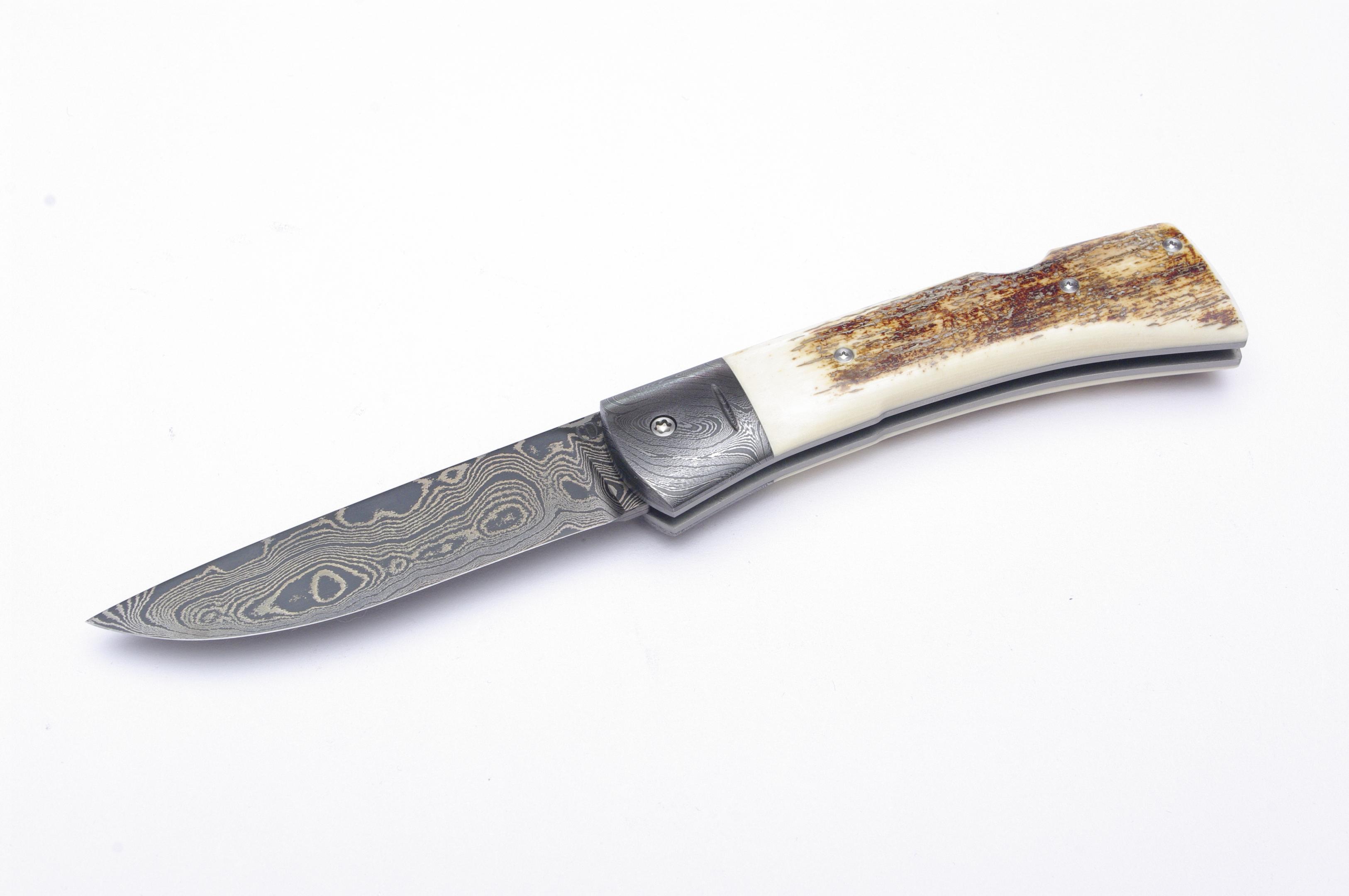 A back lock folding knife by Manfred Rieger. The 85mm blade is Messer Werk Damask, the handle scales
are Mammoth Ivory. The overall length when opened is 195mm.

The Curator, a “Saloon Bowie” by German maker Mathias Maresh. The blade has 1100 layers of
random pattern Damask, the handle is Buffalo. 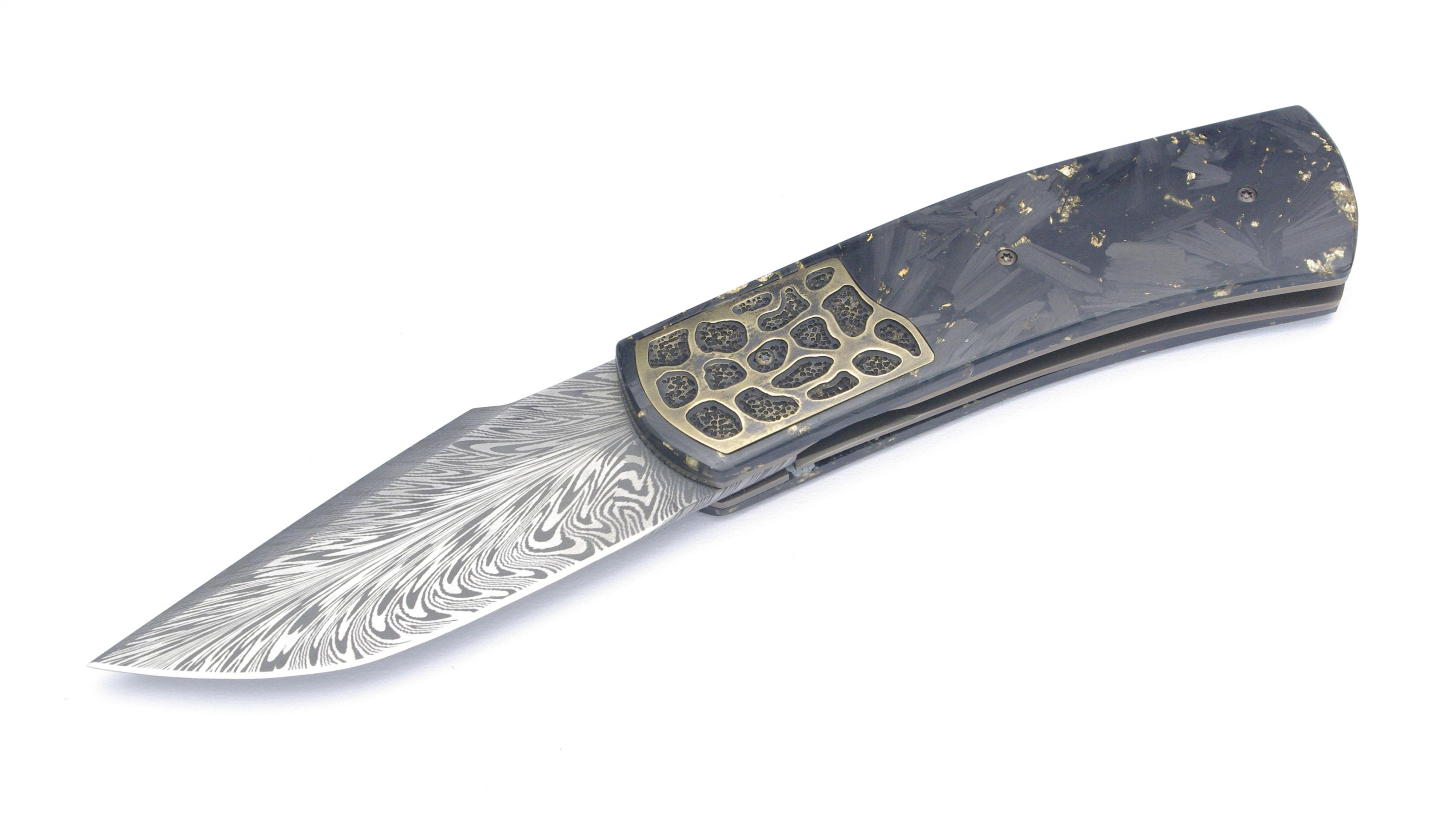 A linerlock folding knife by German maker Metin Anan. The blade is inox Feather Damask, the handle
is Carbon, Titanium and Bronze. Overall length when opened is 197 mm.

The “Purple Haze” by Danish knife maker Michael West. The steel is RWL34, the handle is Agate in
Argentium silver.

Italian knife maker Paolo Petricca presented this “Red Crocodile”, a liner lock folding knife. The blade
is RWL34 with a DLC coating, the handle is coated steel and Carbon Fiber. Overall length when
opened is 210mm.

The “Blue Feather”, a linerlock folder by German maker Reiner Grösche. The blade is Feather
Damask, the bolsters Mosaic Damask. The handle is Mammoth. Overall length when opened
is ca. 20cm.

The Laguiole “Dream Princess” by German knife maker Uwe Göring. The 11.5cm blade is Mosaic Damask
by Vlad Madveev, the bolsters are Vlad Madveev hardened Mosaic Damask and the handle is Mammoth
Ivory. Overall length when opened is 21cm. 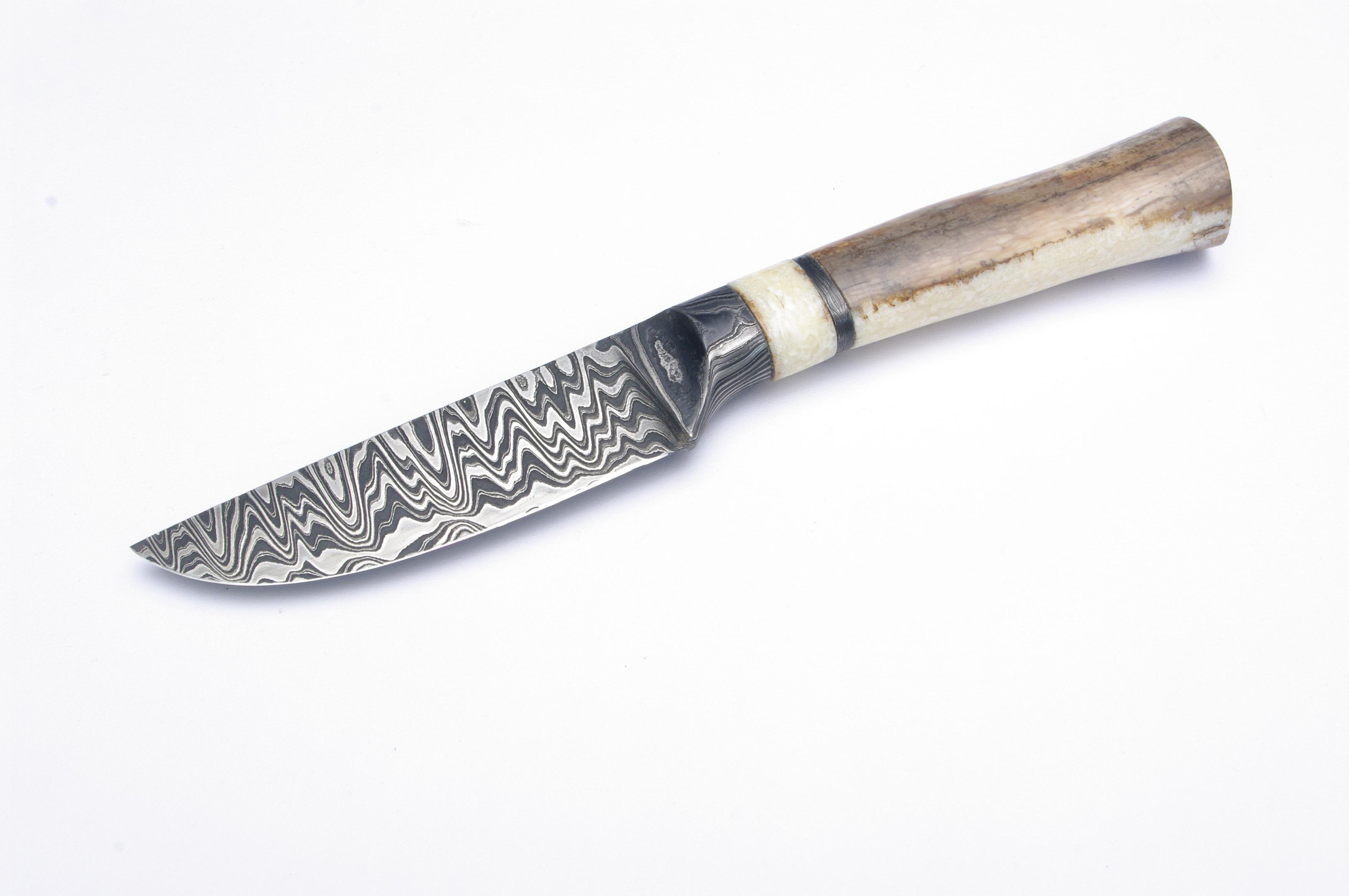 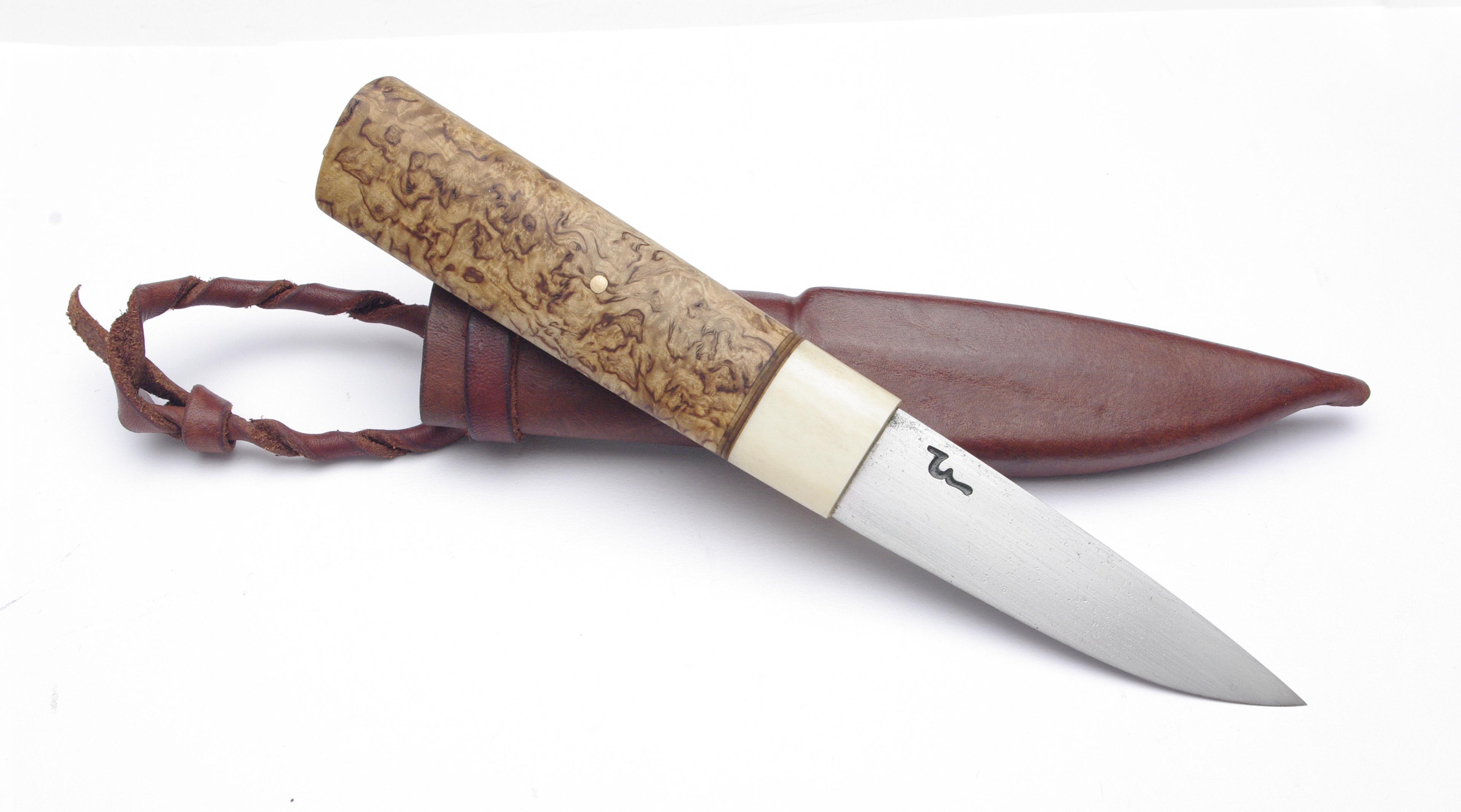 A Scandinavian-style fixed blade by Belgian knife maker Tim Wagendorp. The blade is 1.2442 Carbon
steel, the handle is reindeer and Birch Bark. The Scandi sheath has a wooden insert.
Overall length is 22cm.

A friction folder by Estonian maker Tõnu Arrak. The blade is 14C28N steel, the handle is Titanium.

Utsch & Gierse (Philipp Utsch and Jan Gierse)is a young German company which specialises in 3D printing
of Titanium. This is used, among other things, for making knife handles, which combine extreme lightness
and great strength. The next issue of European Blades Mag. will feature a review of this knife.
Knife Award
One of the features of KNIFE in Solingen is the presentation of the KNIFE Award, an annual award for an outstanding, handmade knife, according to a predetermined theme. The award has been established by the Stiftung Freunde des Deutschen Klingenmuseums (Foundation Friends of the Deutsches Klingenmuseum).
The theme for 2022 was „Myth of the Bowie Knife”. To participate in the KNIFE Award 2022, knifemakers to send in their individual, handmade interpretations of the Bowie Knife. The requirements were, amongst other things, a single edged blade with a minimal blade length of 17 cm and a concave or straight clip point, quillon/hand guard, and all parts of the knife, including Damascene steel, made by the maker, which had to be one single person.
There were 26 entries, which were judged according to craftmanship, design and creativity and handling, by a jury of four members representing the Deutsches Klingenmuseum, Stiftung Freunde des Deutschen Klingenmuseums, the knifemaking community, and external experts. They had a difficult task, and in the end the KNIFE Award 2022 was awarded not to one, but two participants: Rafael Schlünder and Mathias Maresch, both from Germany. The following pages show all the participating Bowies. The pictures were made by Lutz Hoffmeister from the Deutsches Klingenmuseum Solingen.

The winners of the KNIFE Award 2022: Mathias Maresch (second from the left) and Rafael Schlünder (far right). 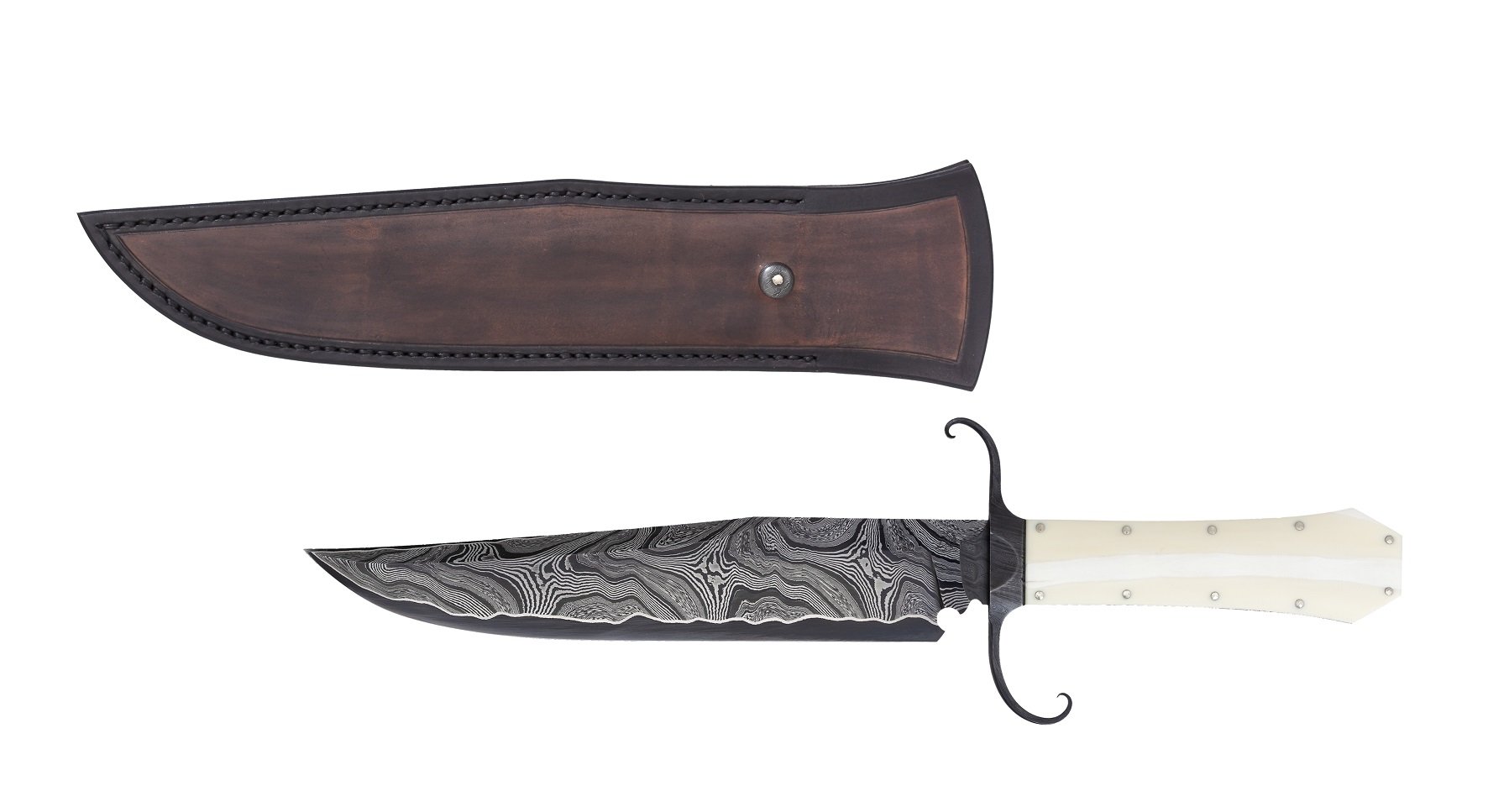 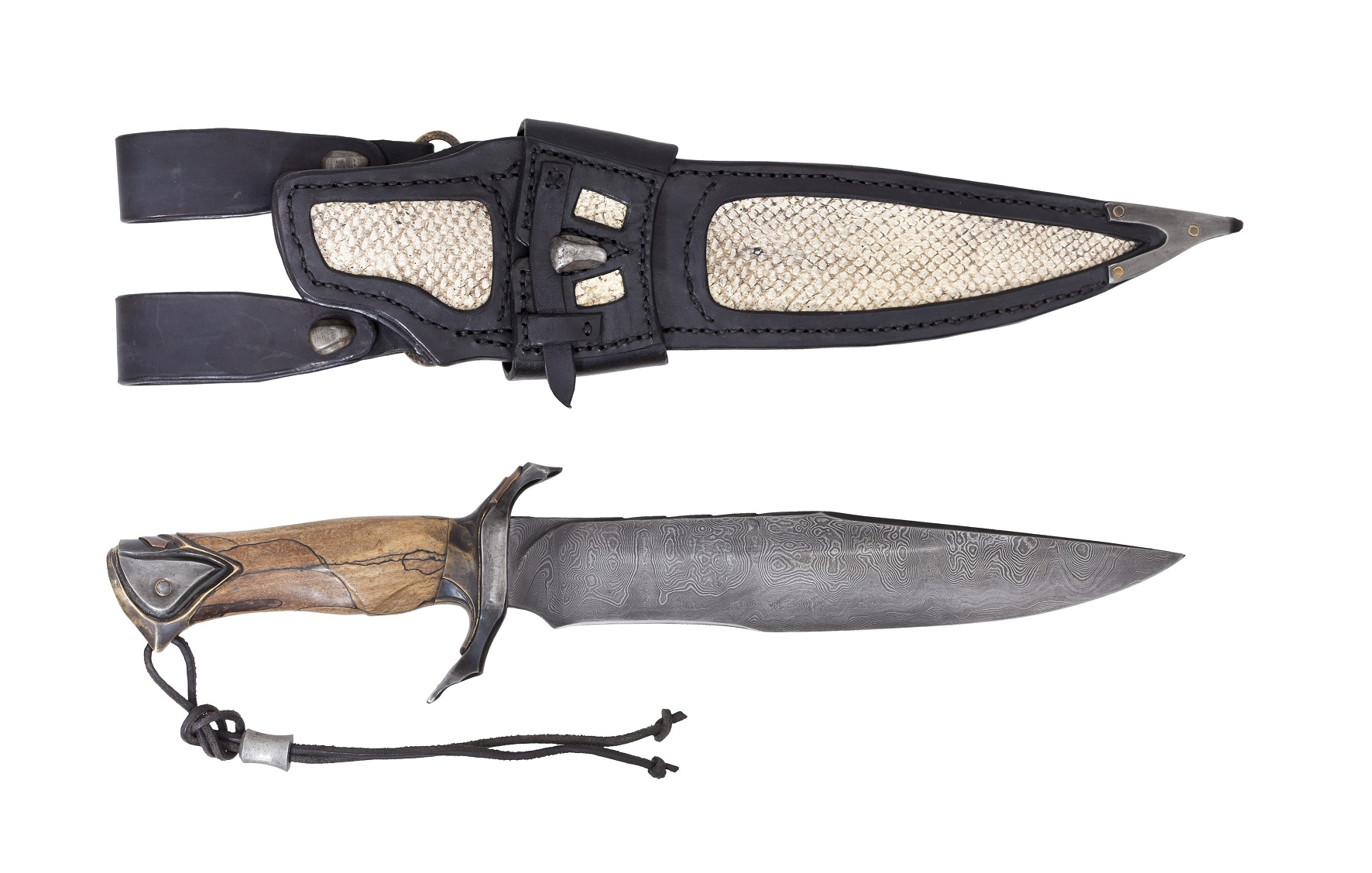 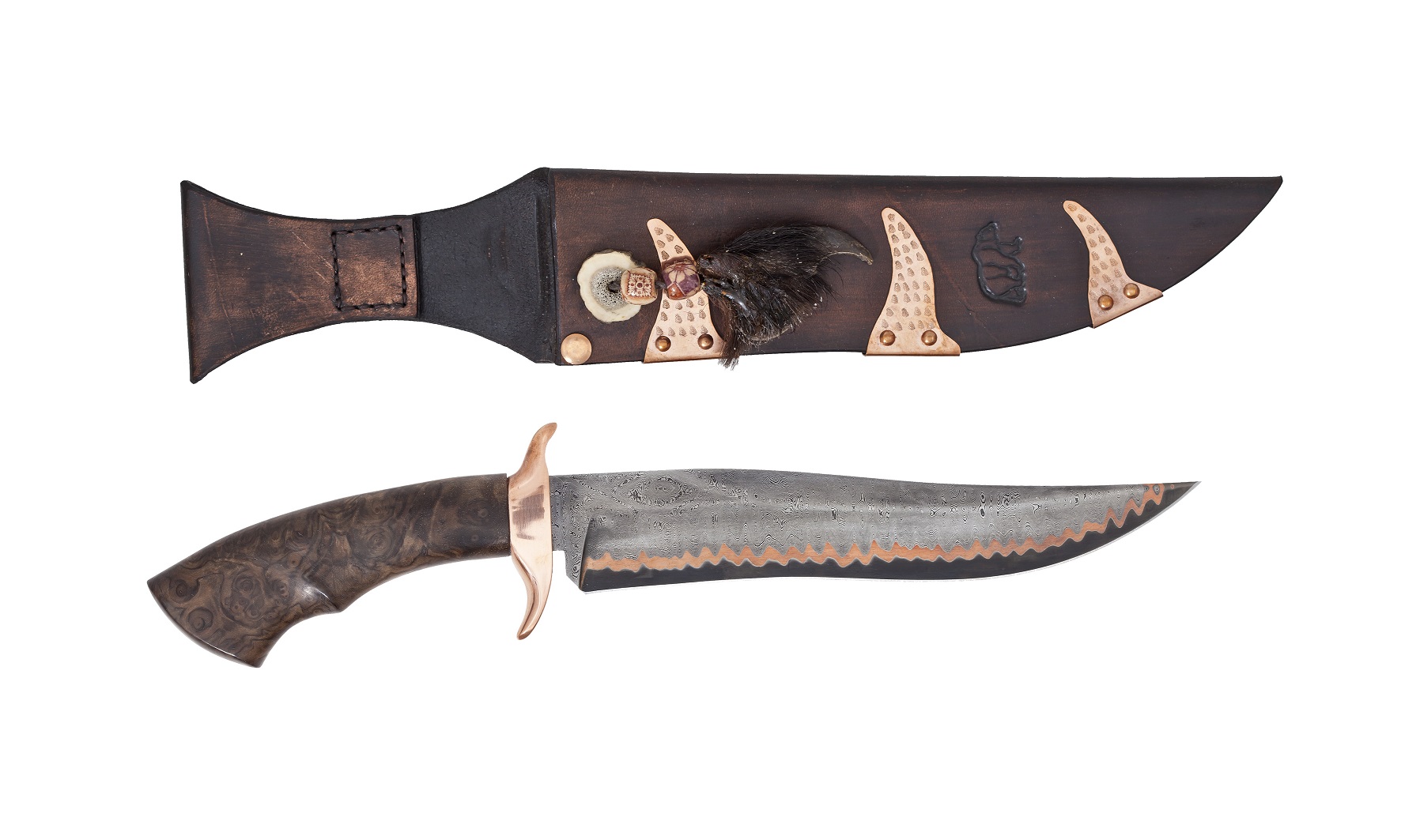 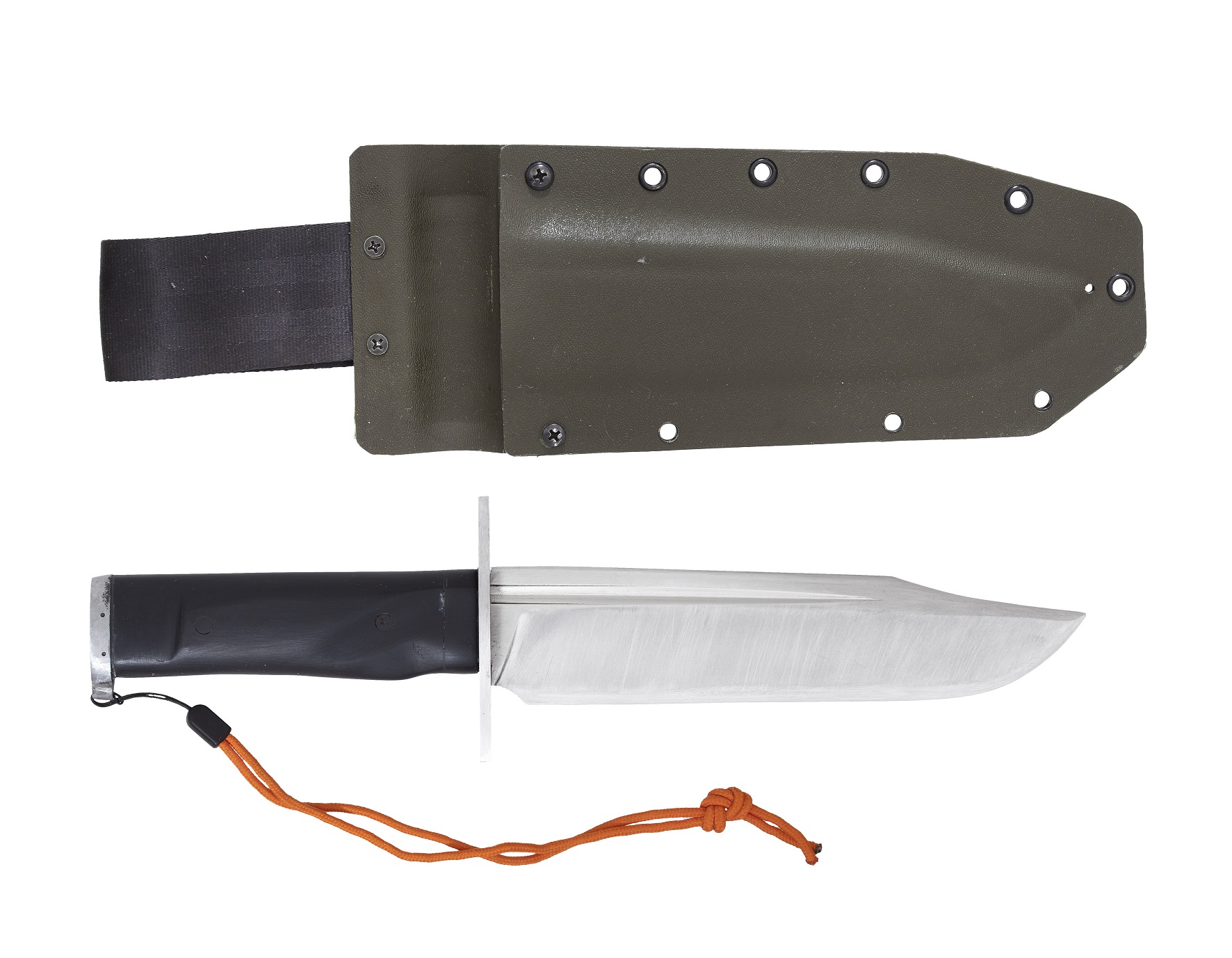 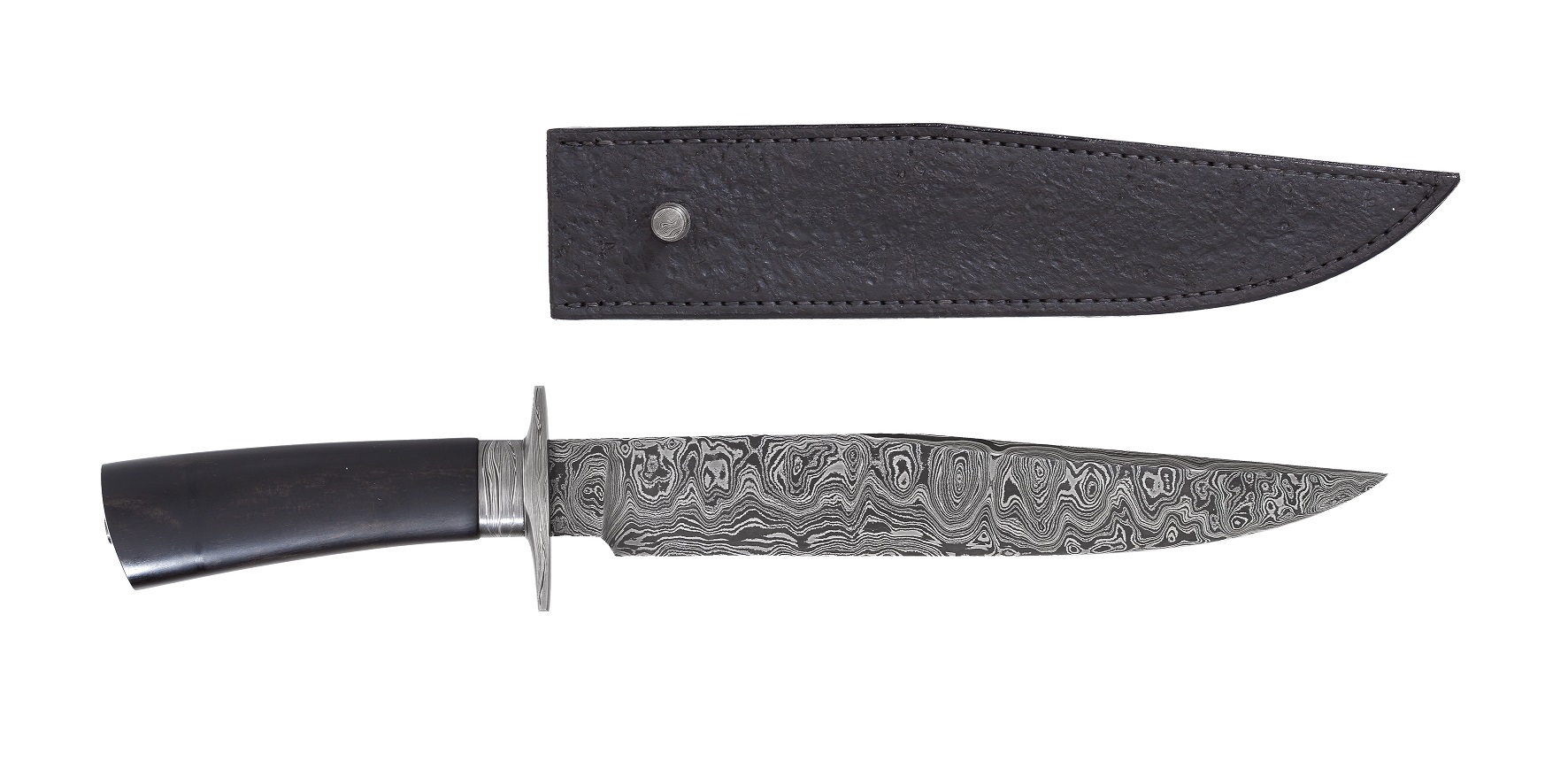 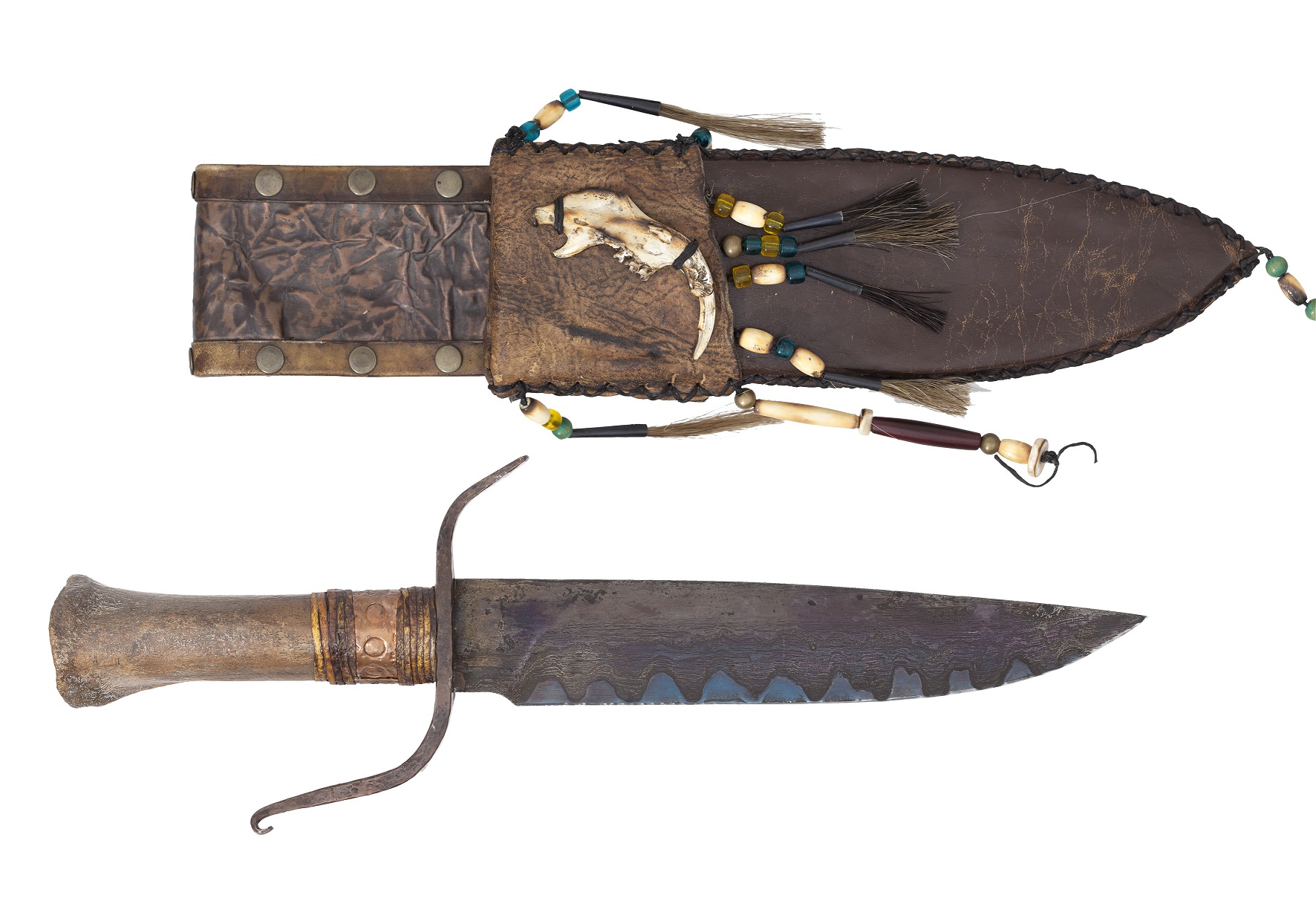 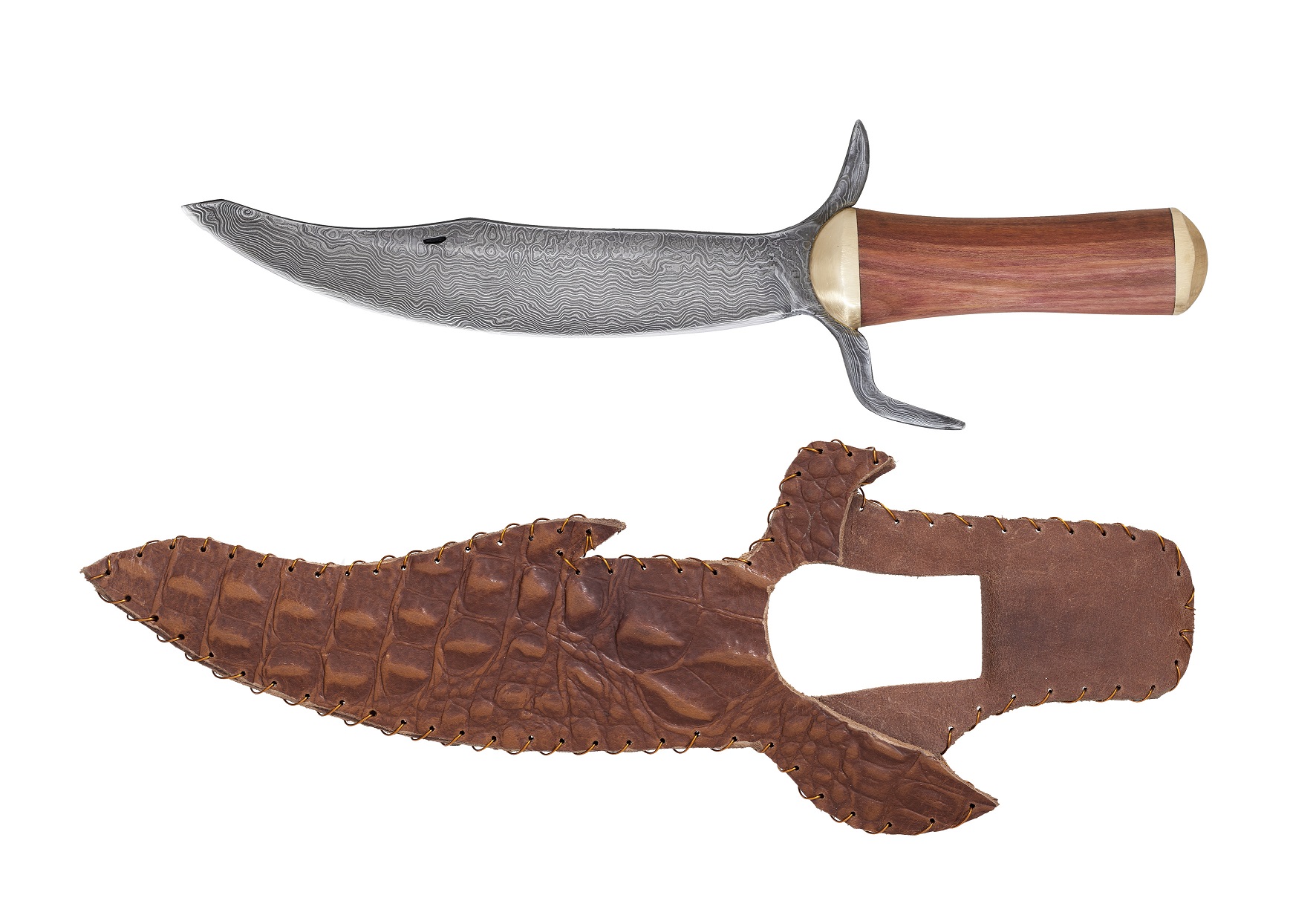 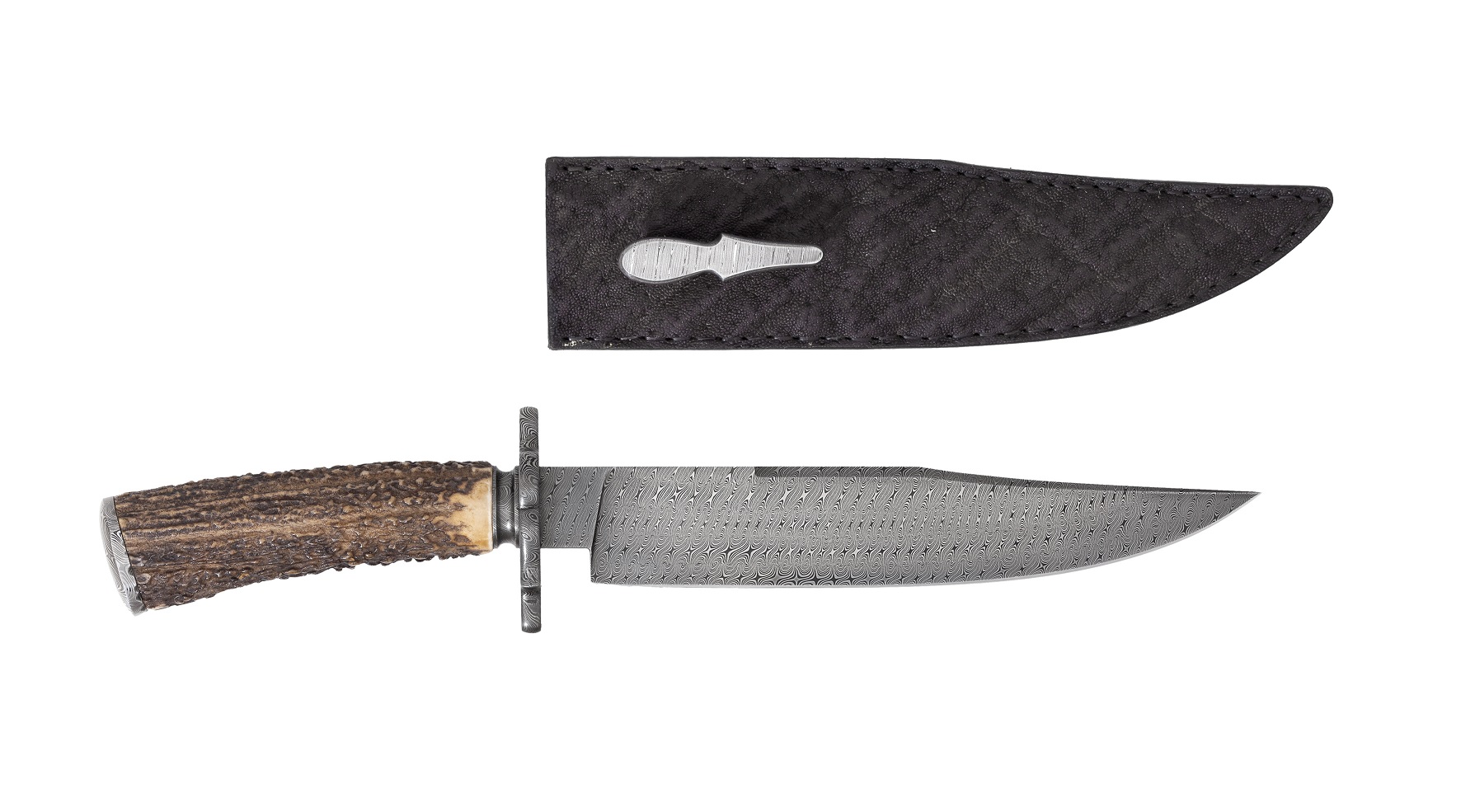 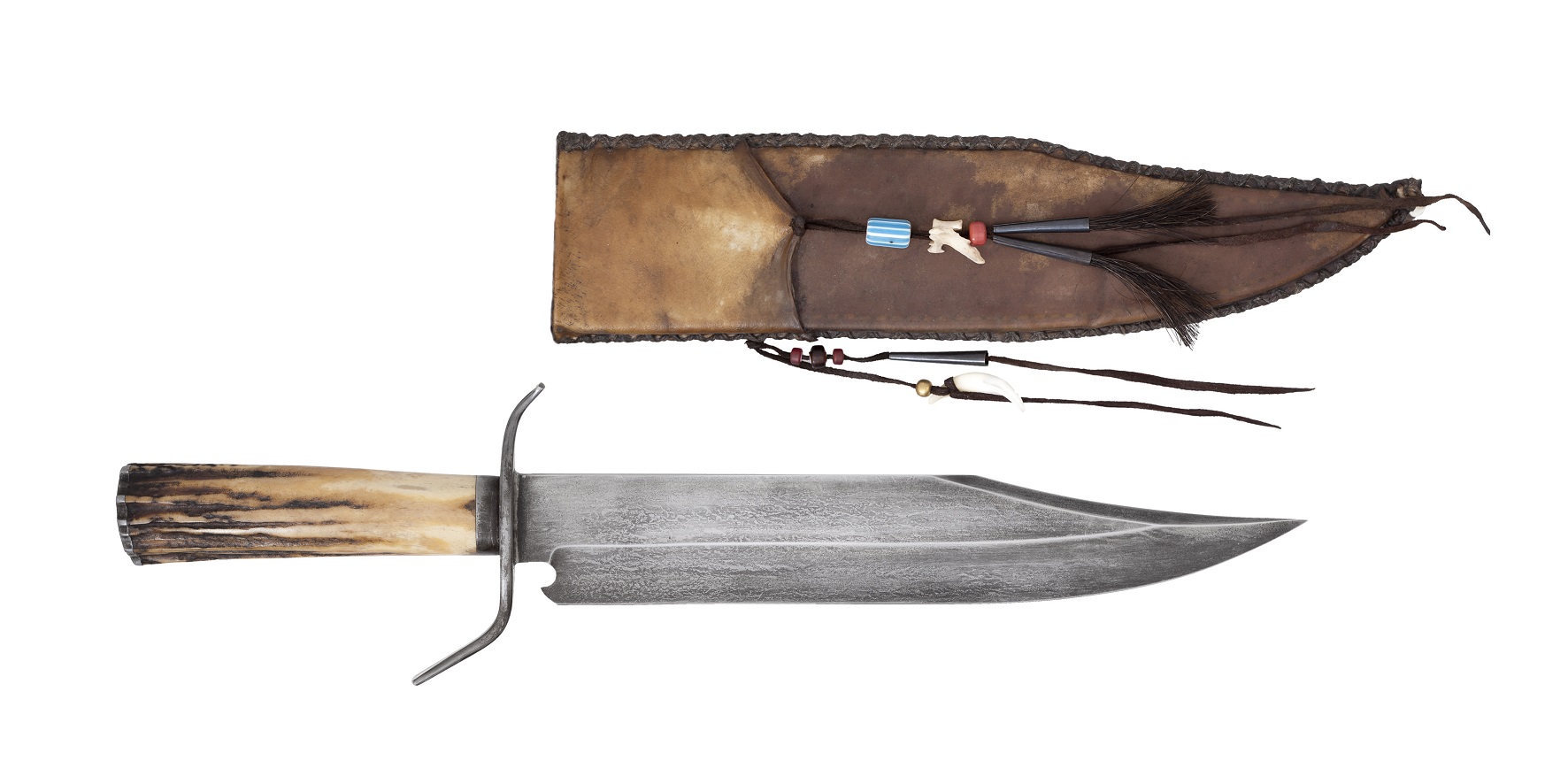 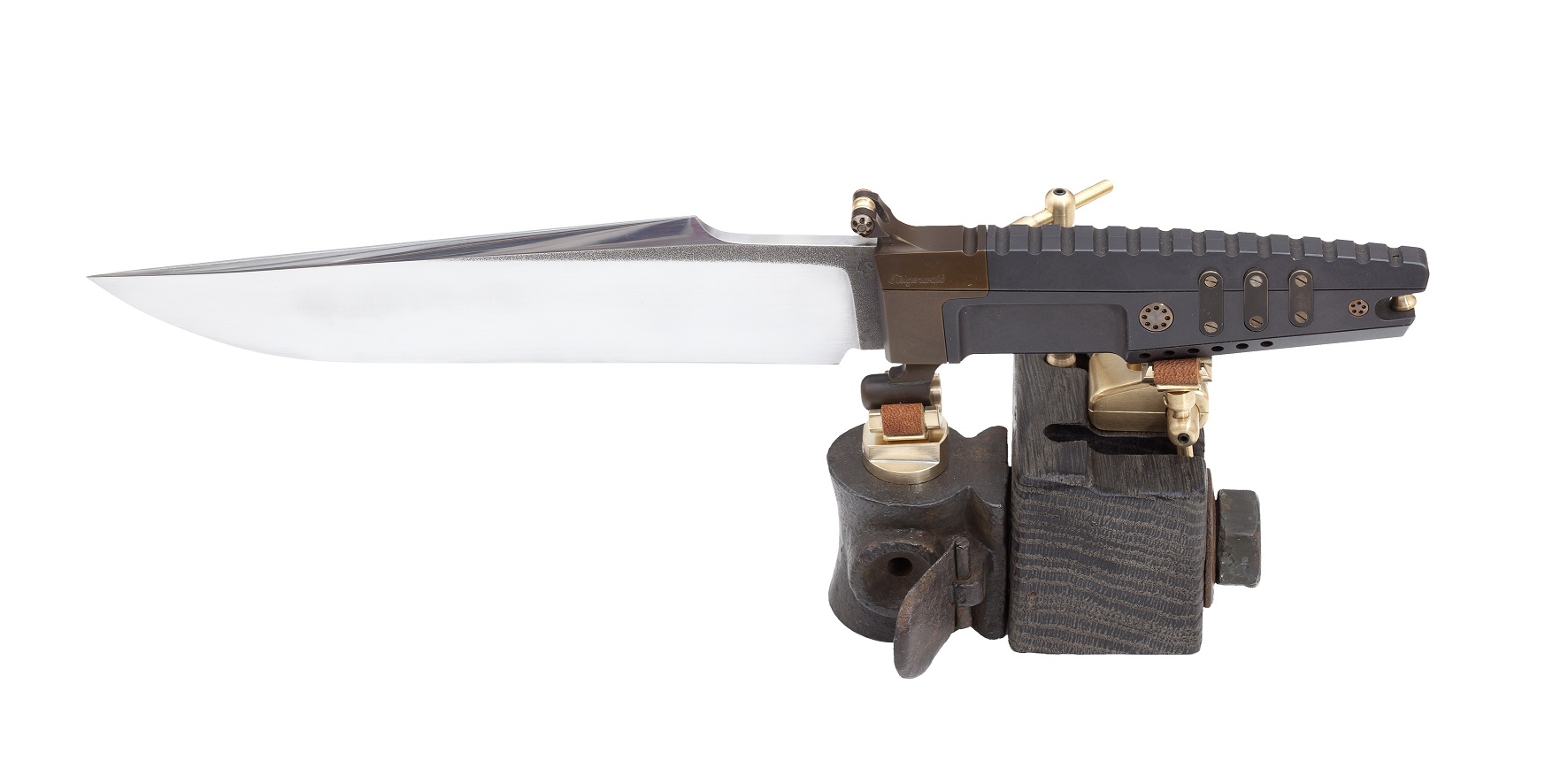