September 2021 saw the 30th consecutive edition of “Noze Příbram”, the annual knife show in Příbram (Czech Republic). There were less exhibitors and less visitors, as could be expected, but the show is still doing well. After all, no picture or internet video presentation can replace the physical contact with an object or a personal meeting with a knife maker. 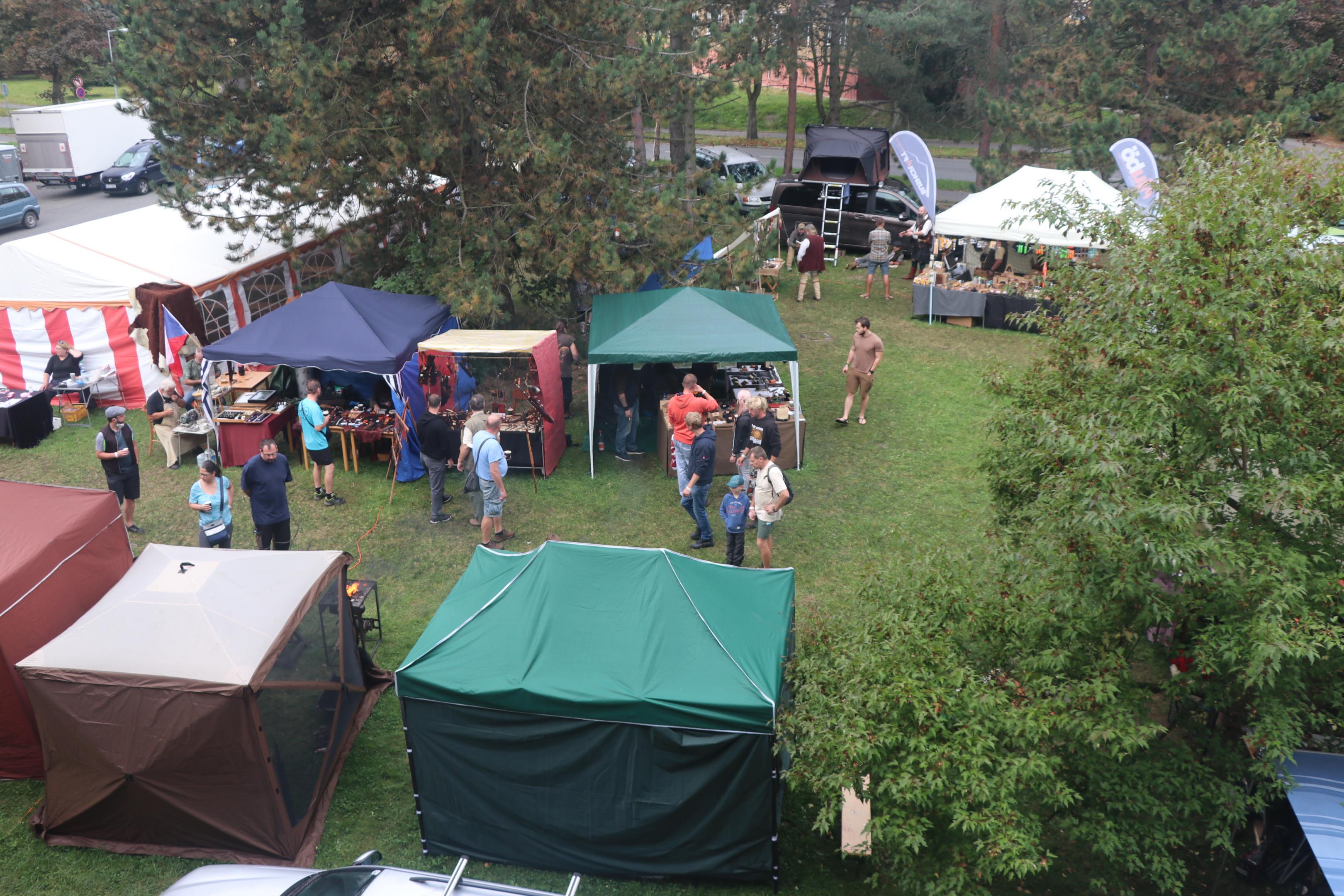 There are things which are hard to believe. One of them is the fact that the knife exhibition in Příbram (Czech Republic), in the second weekend of September, was held for the thirtieth time in an uninterrupted row. If you ask why Pavel Formánek, the founding father of the exhibition, chose the Příbram Cultural Centre as a venue, far from any highway, in a small former mining town, the answer is simple. At the time, Pavel lived in Příbram, and he had good relations with the local municipality as well as with management of the Cultural Centre. The exhibition quickly became a national knife event and the venue became tradition. Pavel Formánek ran the exhibition for 25 years, and as he became unable to continue because of health issues, Viktor Cais took over the organization. This year was the first one when I did not meet Pavel Formánek on the exhibition and I can only wish him good luck for the future.
The 2021 edition was the second one organized under the shade of the coronavirus pandemic. The influence of the pandemic was not that hard felt (subjectively) and did not cause such strong restrictions as it did last year, but still the influence was clearly felt. The numbers tell the story: there were a mere 90 exhibitors (as compared to the historical maximum of more than 130 exhibitors in 2014) and barely 1 500 visitors (the historical maximum being about 2 500 visitors, also in 2014). As a result, the formerly overcrowded space of the main floor of the Cultural Centre had a much calmer, rather relaxed atmosphere. It was possible to walk down the floor without a rush and the overall feeling was rather that of a picnic than an exhibition. On the open air booths the exhibition went in the same mood. 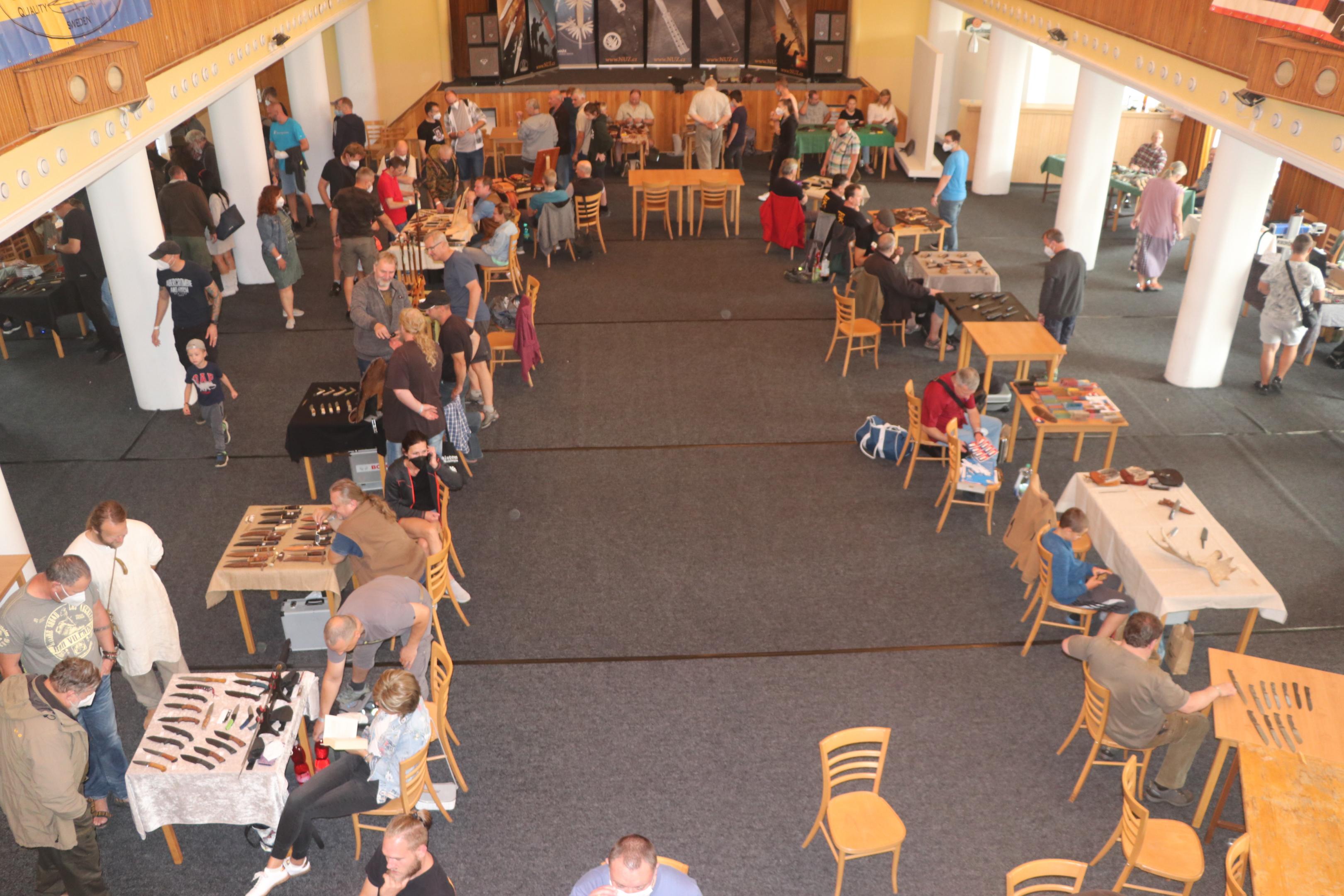 An unusually quiet Sunday morning on the main exhibition floor.

There were many faces missing, such as M. Kyslinger, A. Dabakyian, K. Hons and others, and many of the major institutional exhibitors were lacking (for example the largest Czech e-shop, Jatagan, traditionally present with knife making materials). There was not one single booth with mammoth ivory and other precious materials for making handles and sheaths.
Also, the supply of tools and machines used for knife making was less abundant than in previous years. As a result, the supply of Steel Produce from Czech Rakovník stood out more. Last year, I already mentioned their belt grinders and since then their offer has grown into a well-designed modular system with special fixtures, tables, blade holders, and other special equipment for knife making. From my point of view I especially appreciated a multi axis vise for blade making (at the end of the show, I failed to resist the temptation and purchased one for myself) but I must admit that the king of their products were magnetic tables. These not only enable a perfectly flat grind, but also provide a longer belt life. As for belts, these were presented by the high-quality 3M belts offered by Piskač and Son Co. 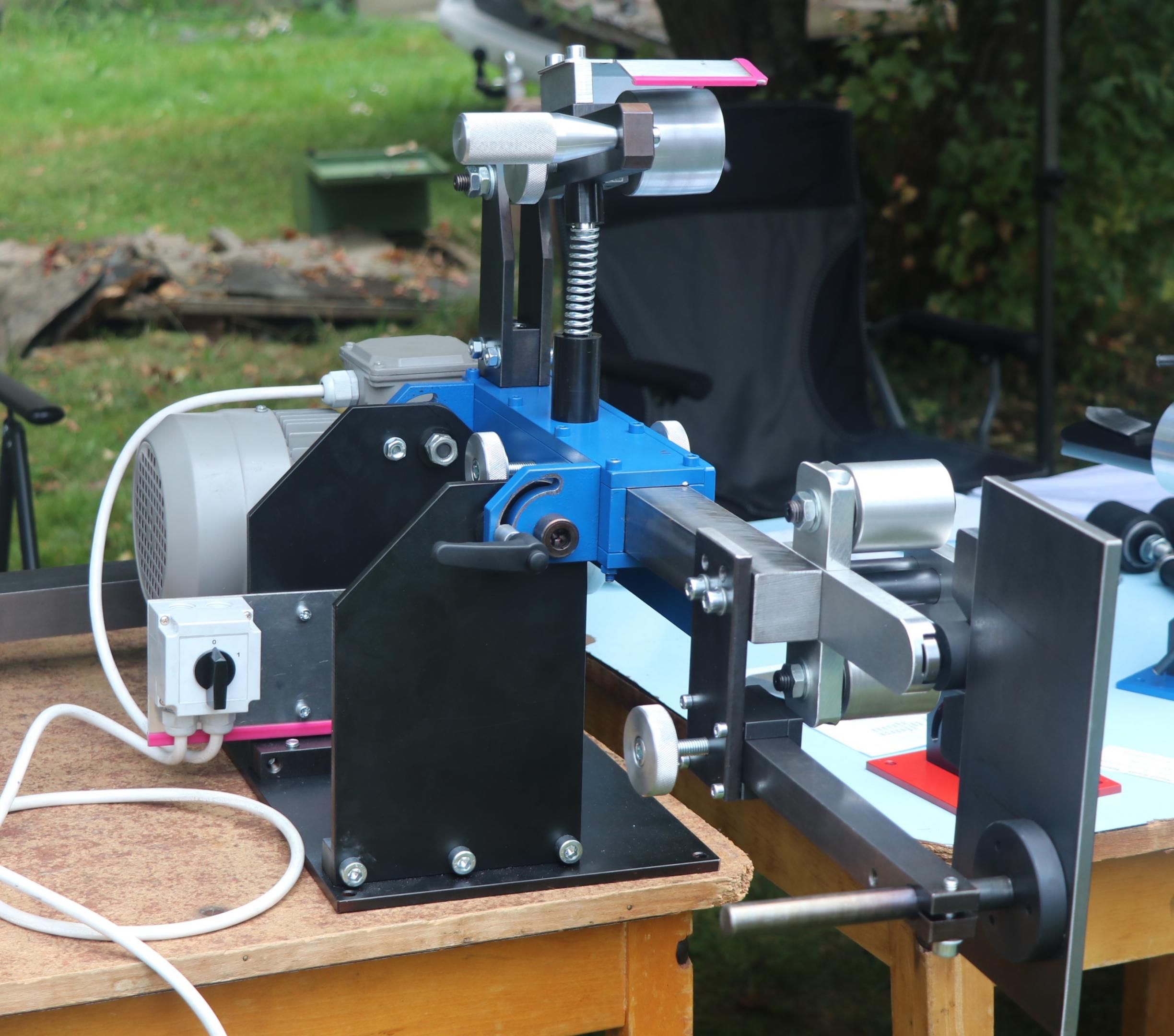 In previous years, the Příbram exhibition featured a Knife of the Year award, and Knife of the Myslivost (Hunting) magazine award, but this year neither of these was awarded.
So far, it may sound like a sad song. But this is not the case. When I compare the Příbram show with other exhibitions (many of which were not held at all), Příbram is still going well. Other shows suffered more.
Natura Viva, the traditional Czech hunting exhibition, was postponed from its traditional date in May to the same weekend as Nože Příbram, ‘stealing’ visitors to some extent. And then of course there is the internet. In the past, many people visited exhibitions because of the discounts. Now the situation has changed. Society in general has gotten used to internet shopping as a regular way of buying anything, not just knives. And prices on the internet are the lowest ones. For the exhibitors, there usually is no more margin for an exhibition discount. Keeping all this in mind, the fact that there were still some 1 500 “die-hard knife freaks” who dedicated their time and came to the show, is a respectable and excellent result. 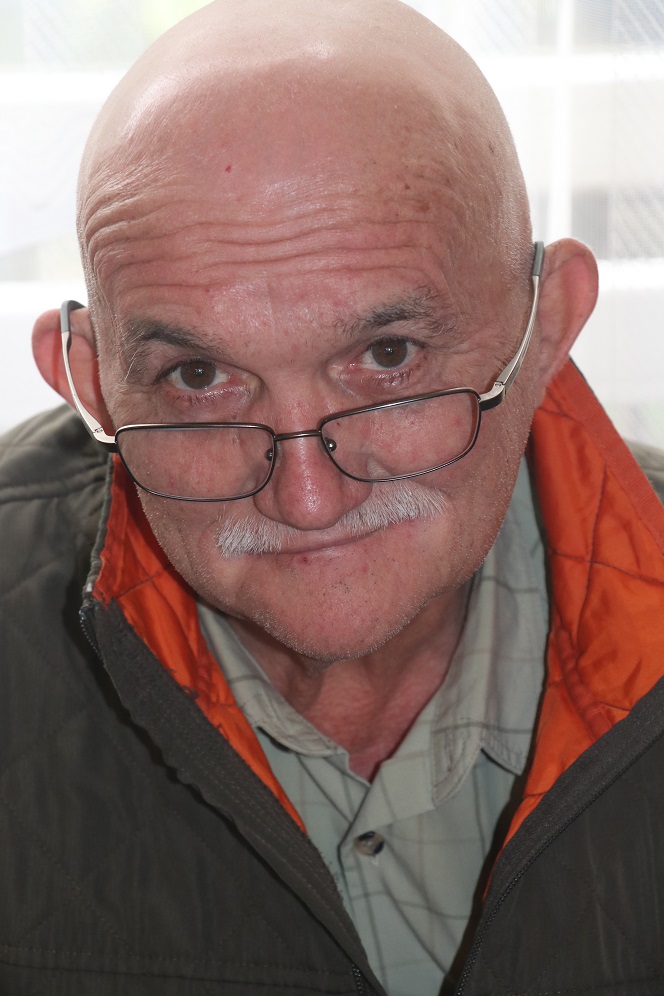 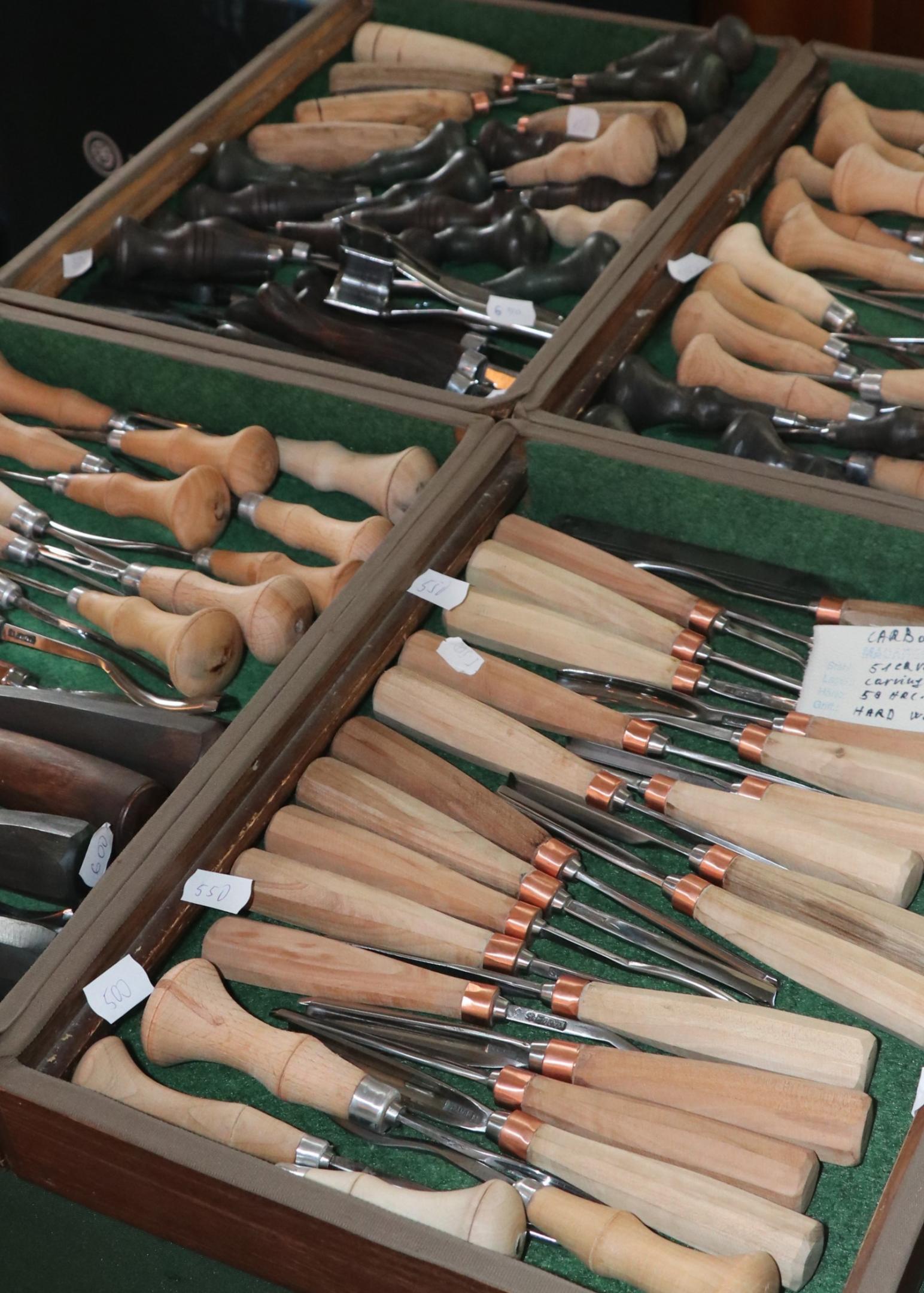 Janos Maradas is a Hungarian exhibitor in Příbram and on Czech shows in general. He offers good knives
at a good price and not only that. In his booth you can see utensils, chisels, picks etc. If there is an
incarnation of an old-timer, universal in his skills, then Janos fits this definition perfectly.
The following pages show some of the knives which were shown in Příbram, but first let me make a brief comment about the question: “Is it still worth going to these exhibitions?” My answer is clearly a YES. No picture or internet video presentation can (in my opinion) replace the physical contact with a true 3D object. There is no replacement to the touch of precisely processed steel, bone, wood, leather and whatever other materials used for knife making. With all this in mind, I urge you all: if you are a true knife connoisseur (ie. a knife lover and knowledgeable person) come and see for yourself. Not only in Příbram, but at any knife exhibition within your reasonable reach. The exhibitions are an important activity, not just in buying and selling knives, but also as a place of comparison, an activity that cultivates the capability of both craftsmen and traders. And they are important places for the exchange of opinions and places of simple, good old friendship. 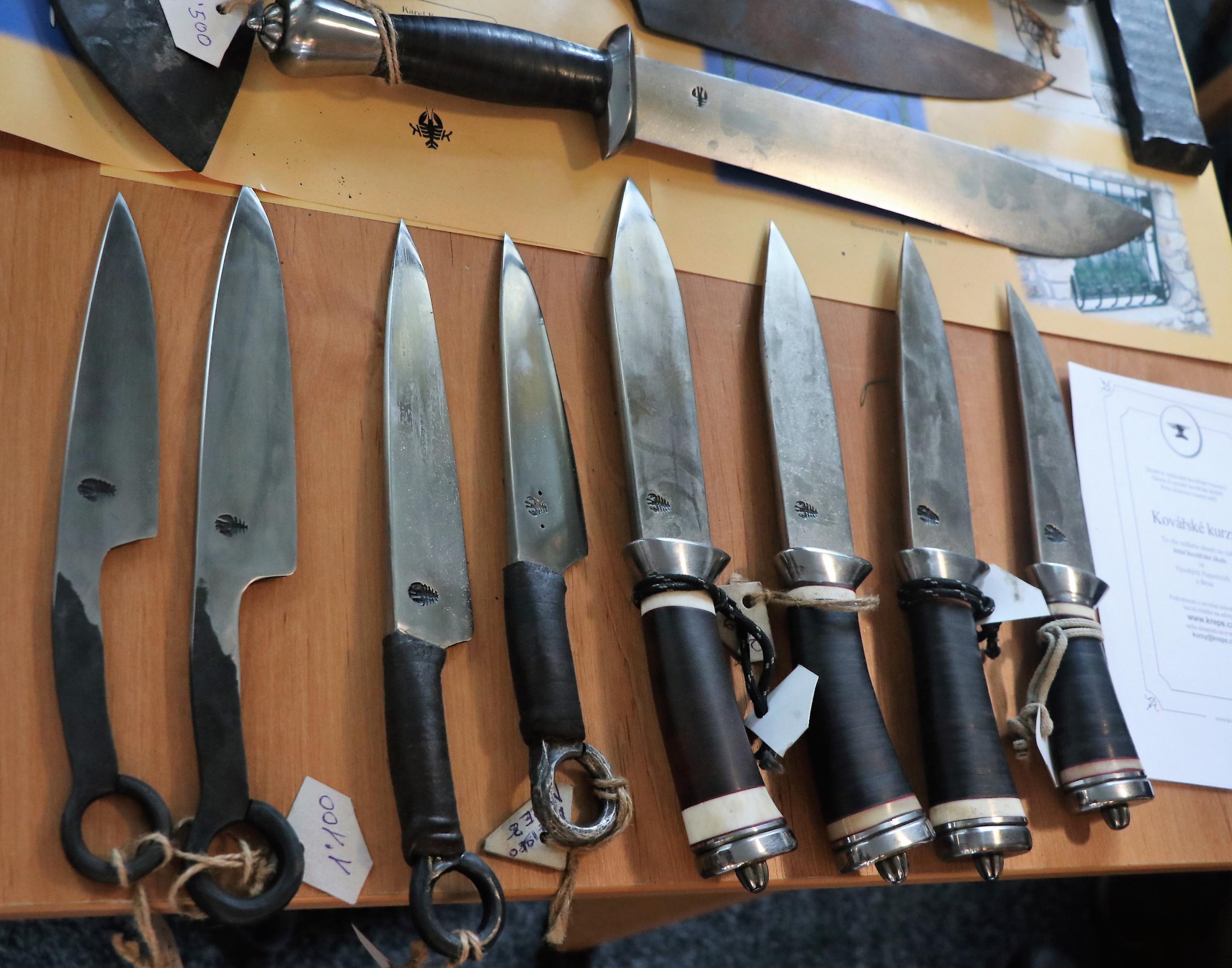 Robust work of blacksmith Karel Krebs. Rugged tools that will last and serve.

Swords and other medieval edged weapons made by Karel Leier are another regular part of the exhibition.
The maker has noted a steep rise in the interest for sharp, combat ready weapons, especially from
Germany and France. 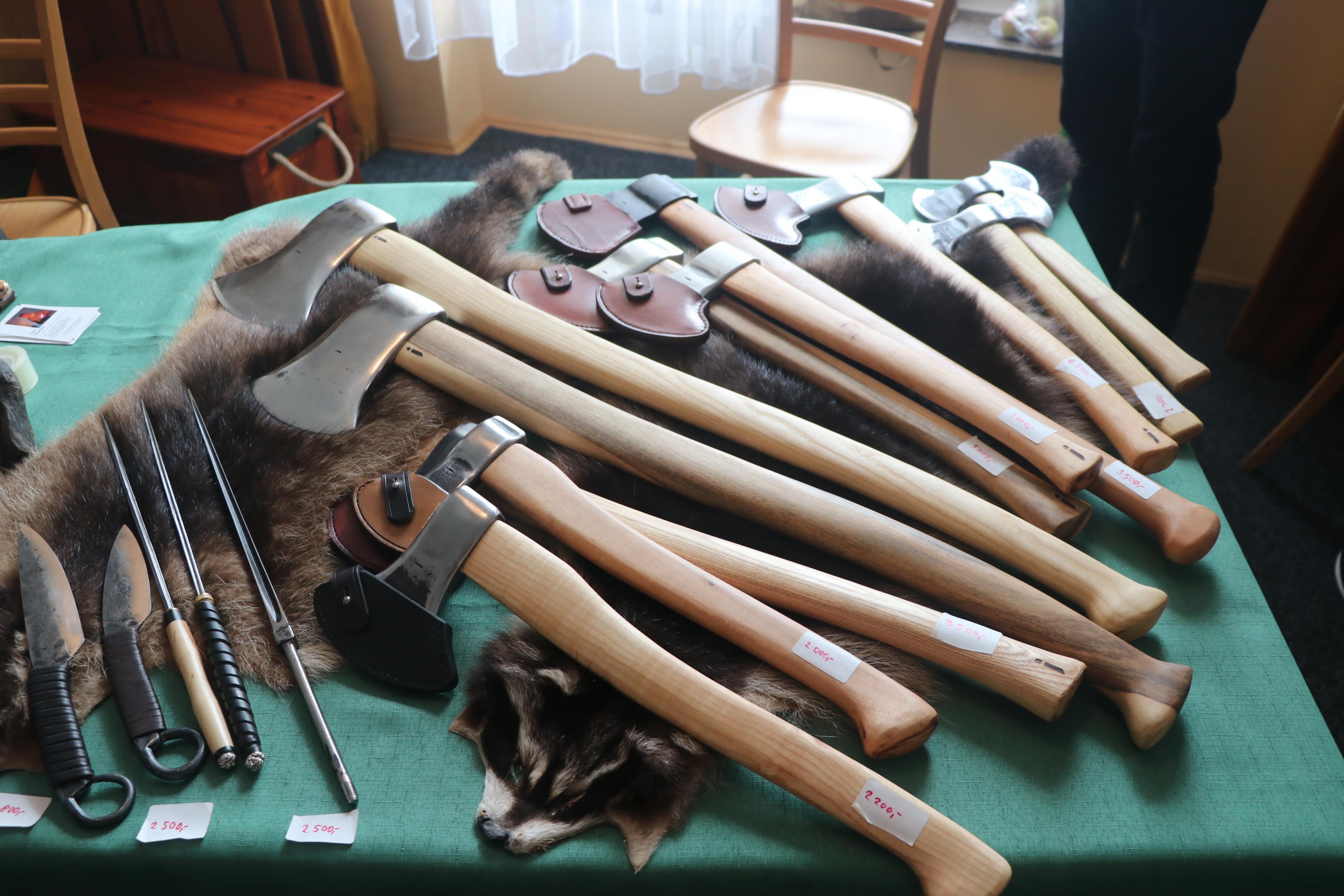 Axes and knives by Aleš Karban, bearer of multiple prestigious awards from blacksmith symposiums
Hefaiston on Helfštýn. His tools are excellent in blade quality. 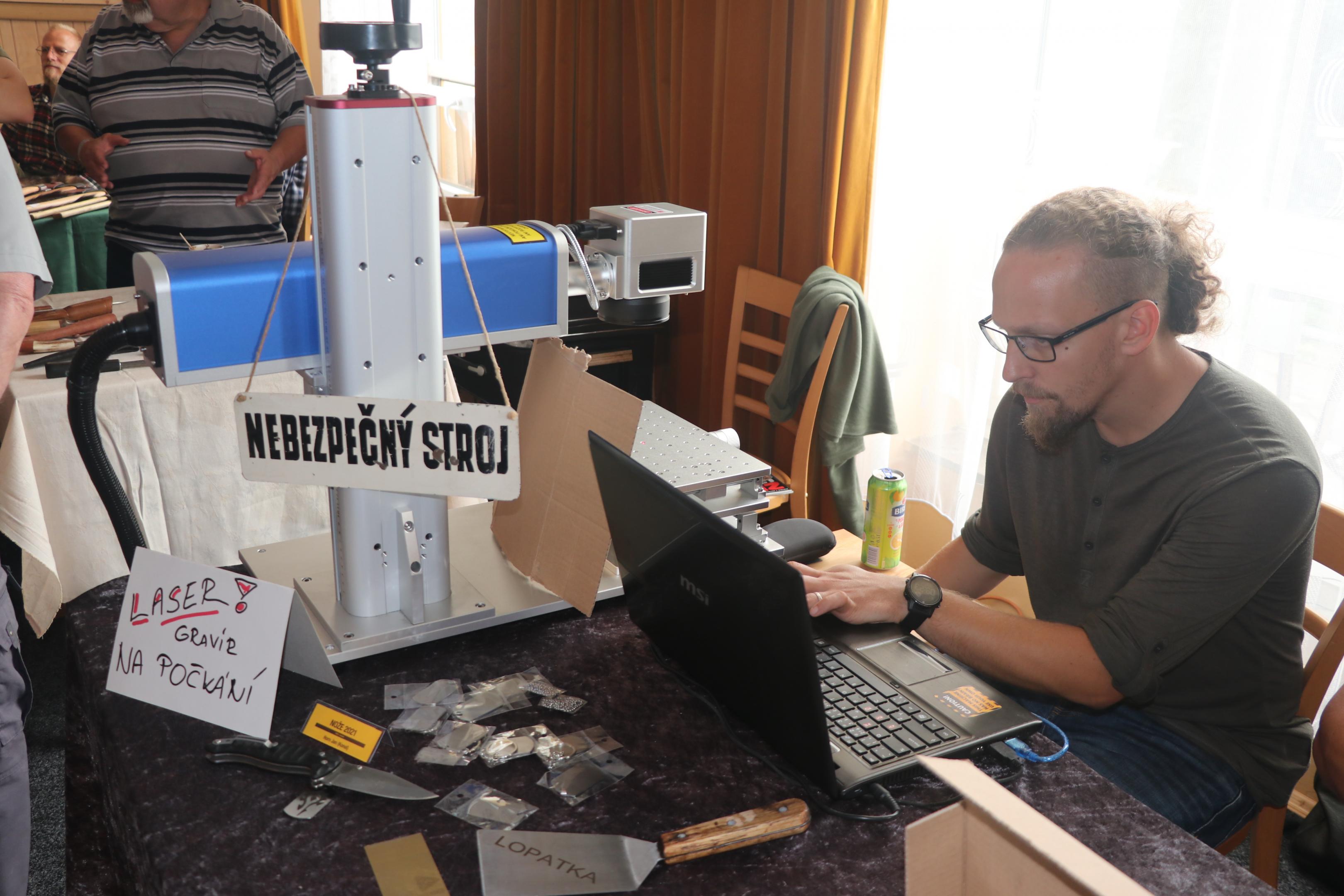 This laser engraving machine in the Konol booth can burn excellent ornaments even into hardened scales
or blades in a less than minute. You could choose from prepared motifs or you could make an individual
agreement on a custom engraving after the exhibition. 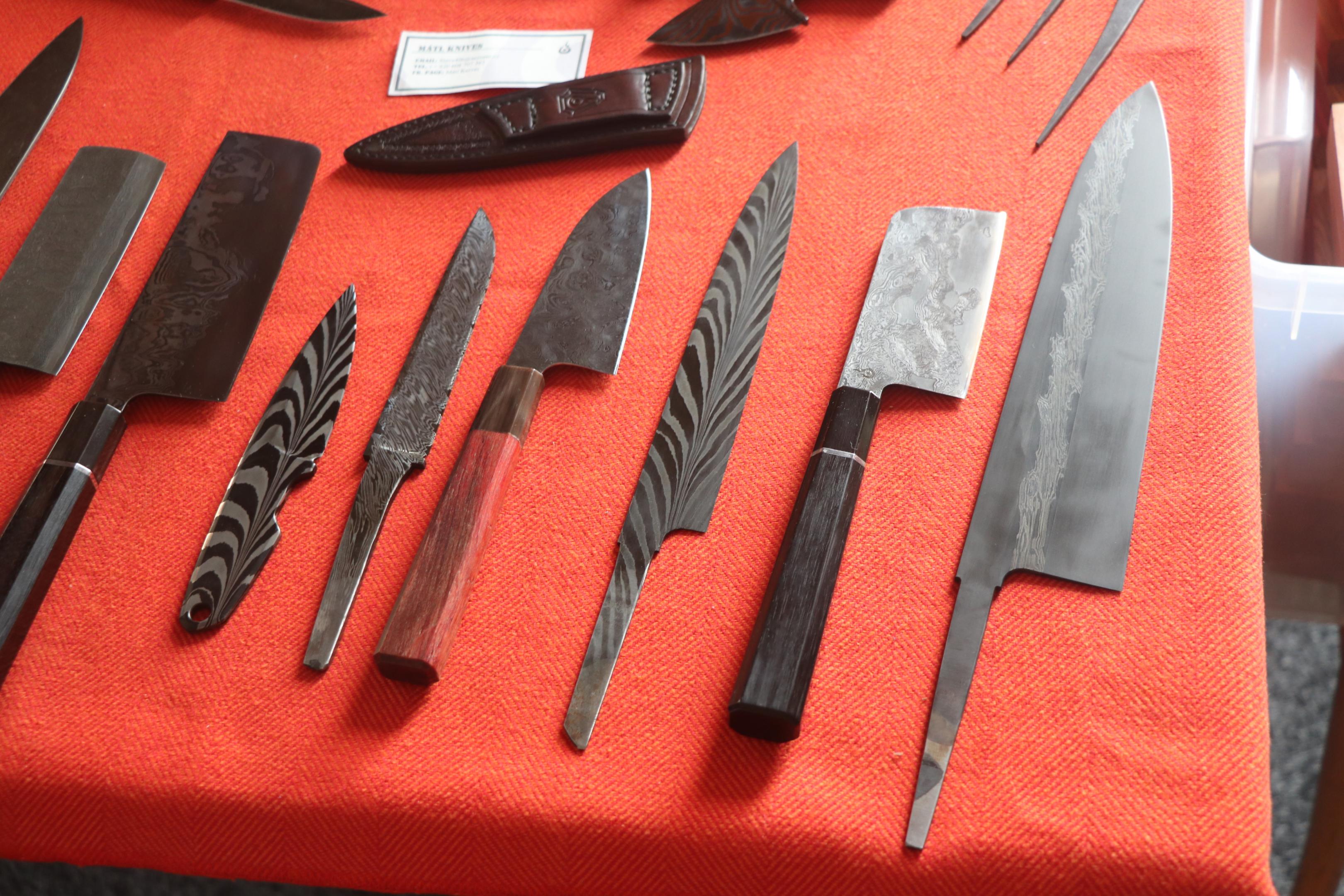 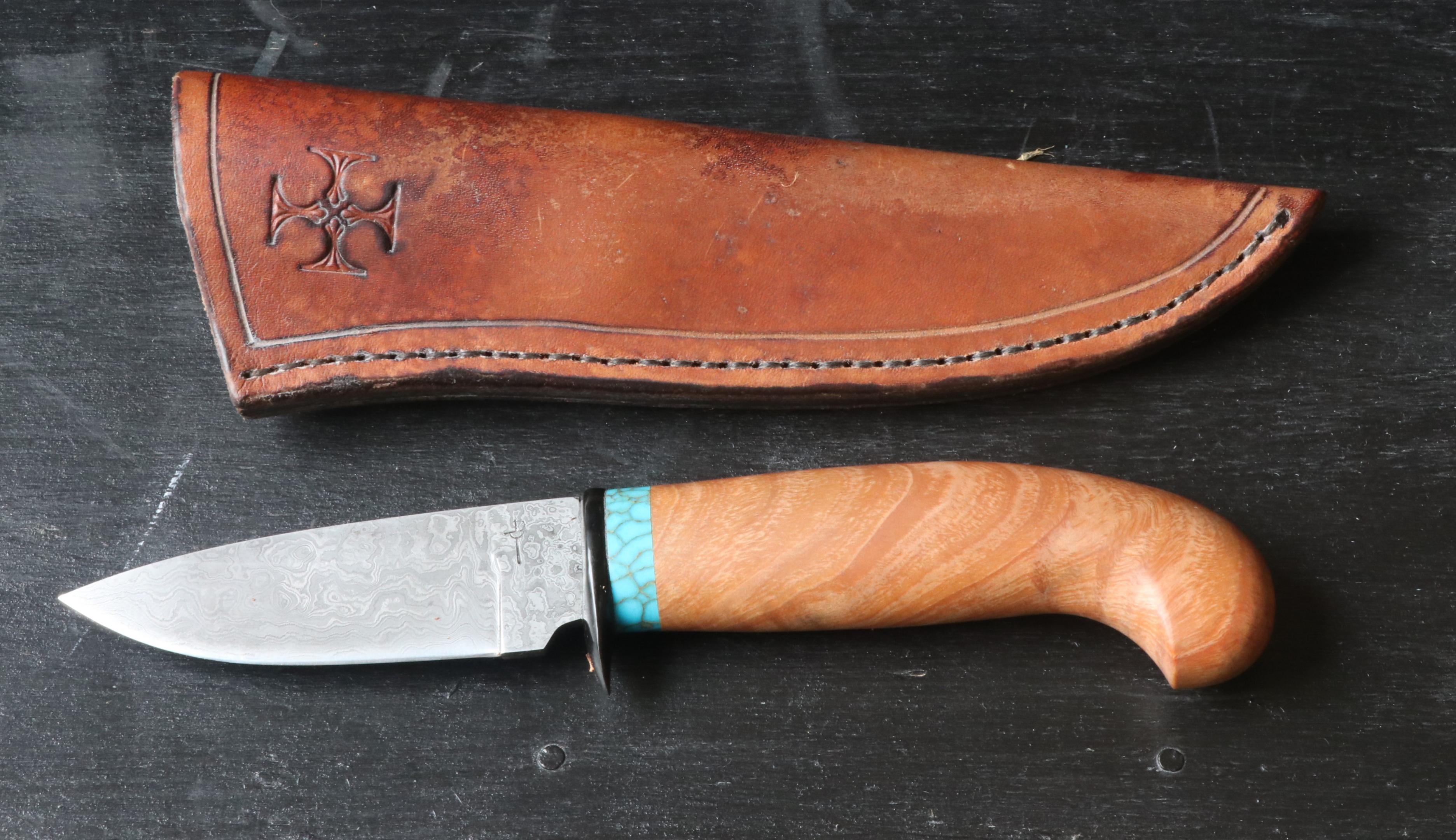 A fixed blade by Bohdan Chalupný. The 91 mm blade is made from 19312 and nickel steel, the handle is
Turquoise and Elm. 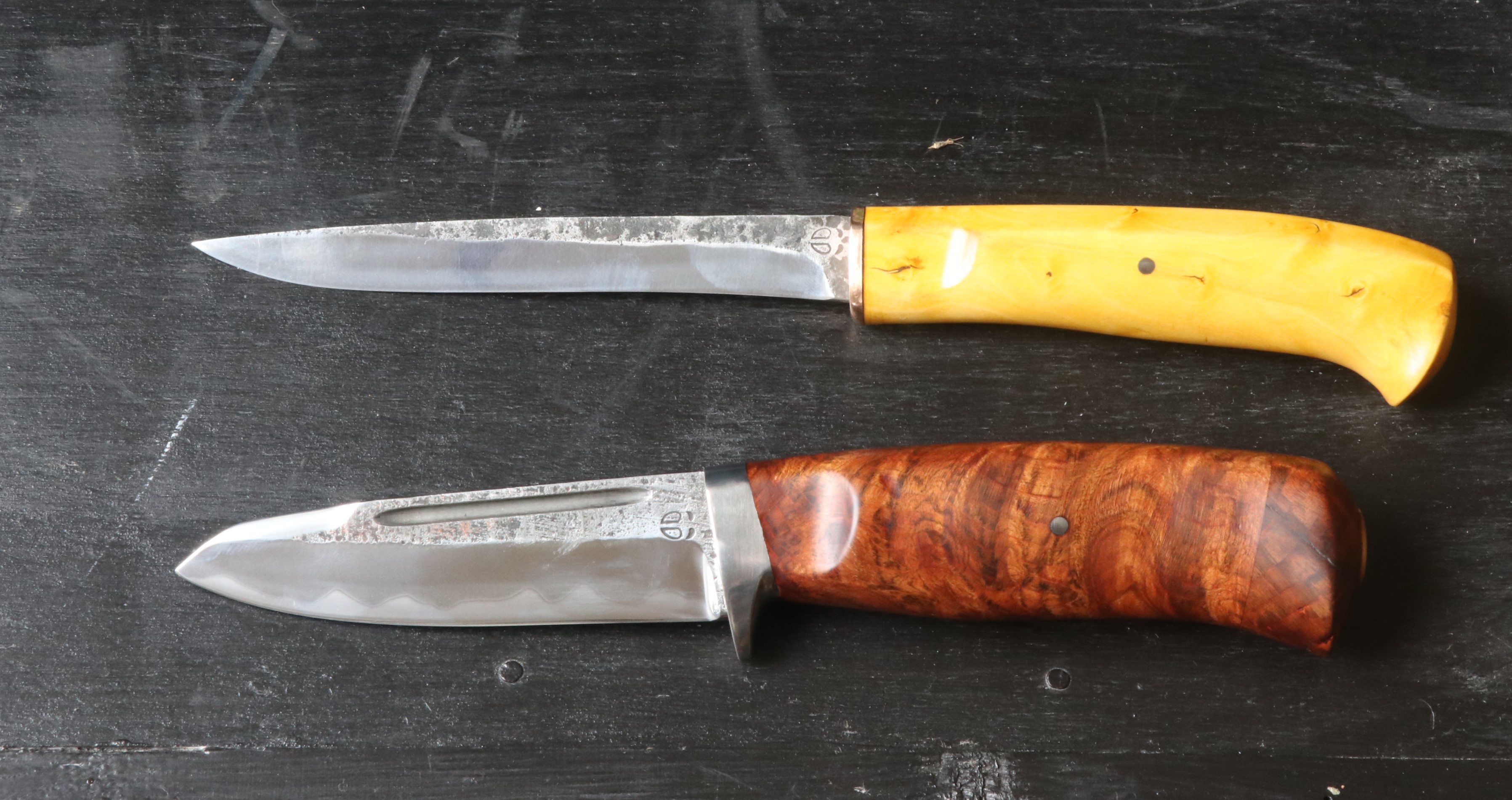 Two knives by Lubomír Šmidrkal. The upper knife has a 135 mm blade from M390 steel and an Elm handle.
The lower knifes has a 105 mm blade made from AK5/N690 and a Boxwood handle. 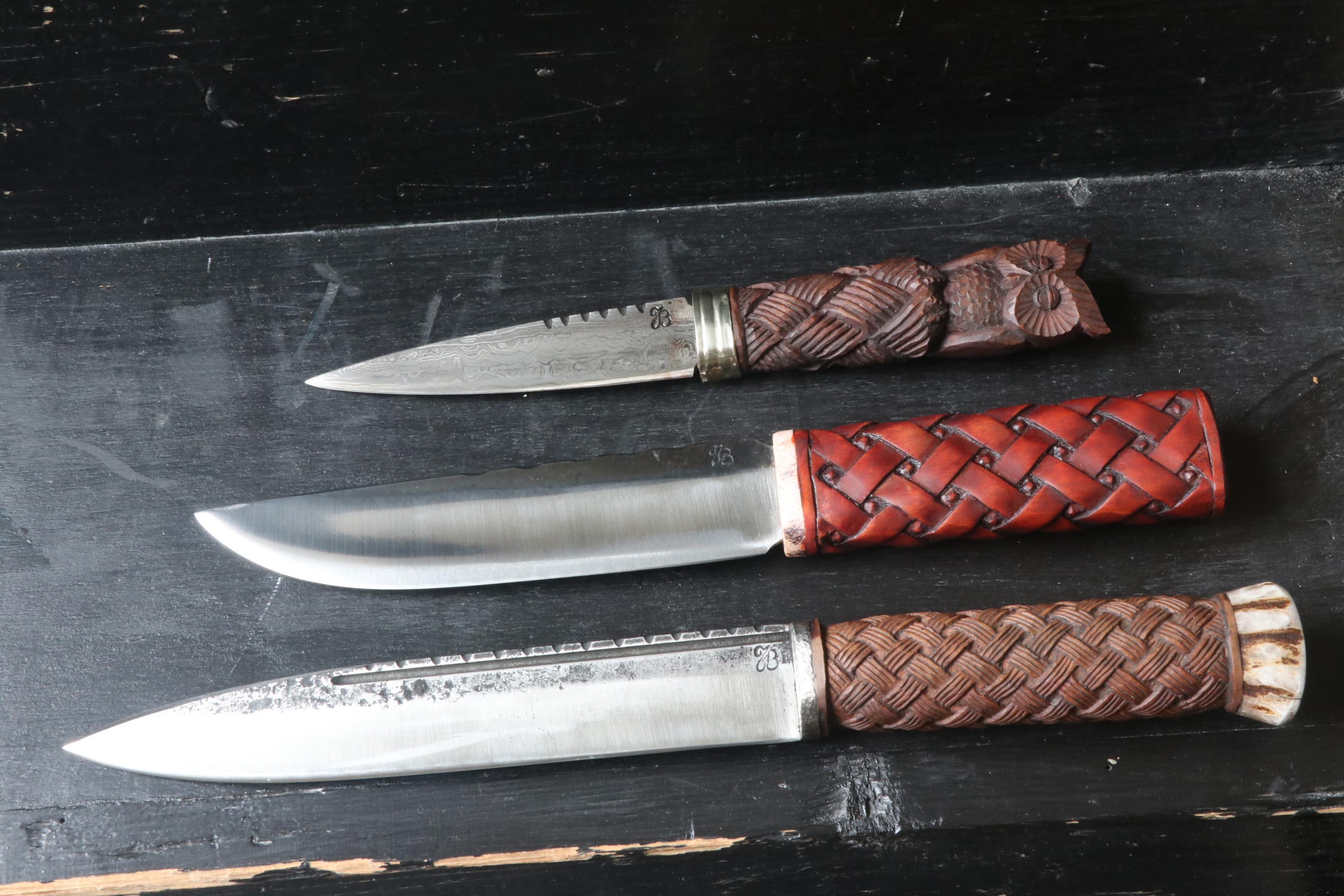 Three knives by Jaroslav Brixi, all three with a Hawthorn handle. The upper knife has a 115 mm blade
fromM3909, the one in the center has a 167 mm blade from 19800 and the lower knife has a 200 mm
Damasteel blade. 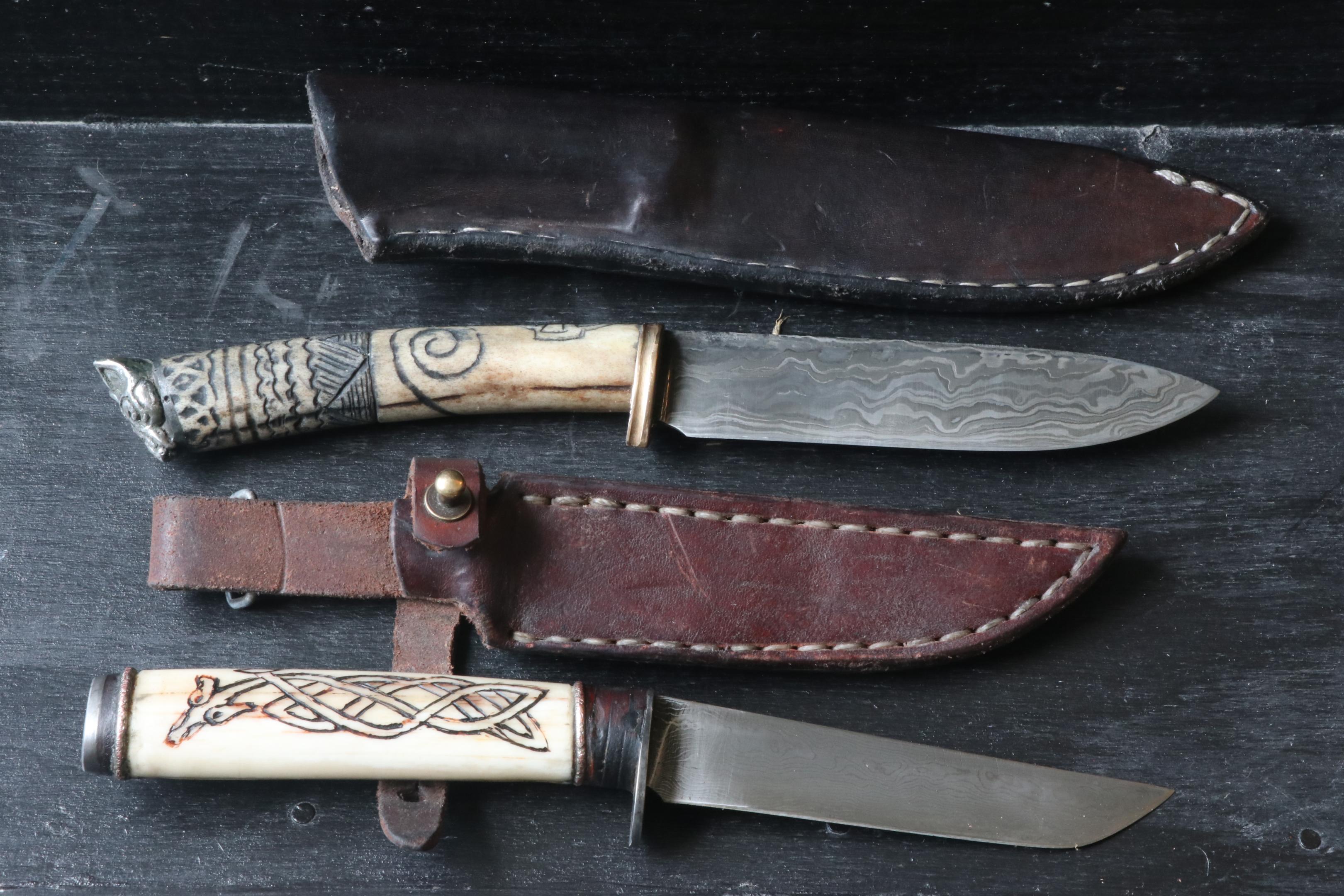 Two fixed blades by Novotný, both with a carbon steel Damask blade and Antler handle. The upper knife
has an overall length of 230 mm, the lower one measures 209 mm. 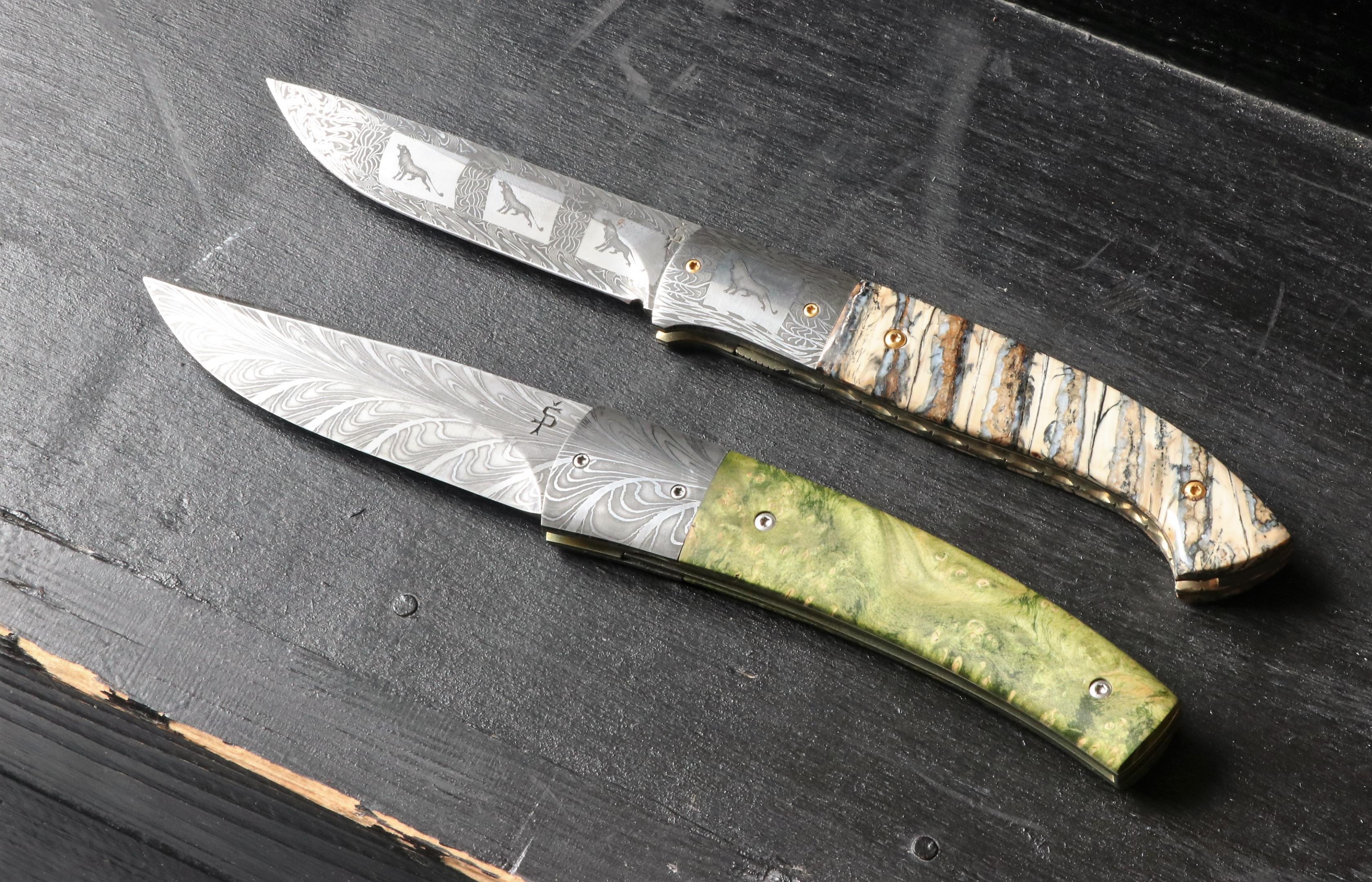 Two folding knives by Pavel Ševeček. The blades (both measuring 93 mm) are from carbon steel Damask.
One knife has a Mammoth tooth handle, the other a Serpentine and Maple handle. 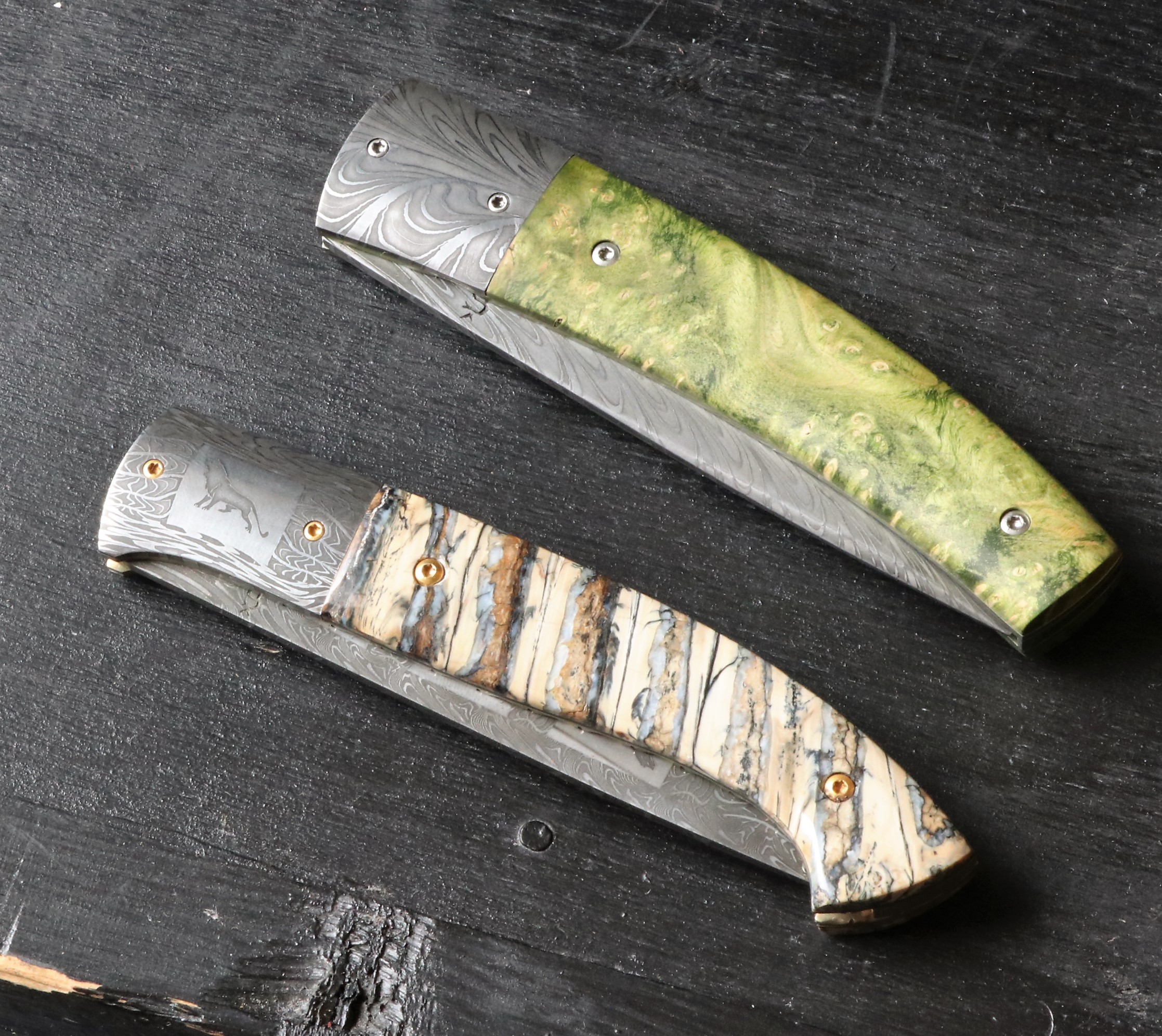 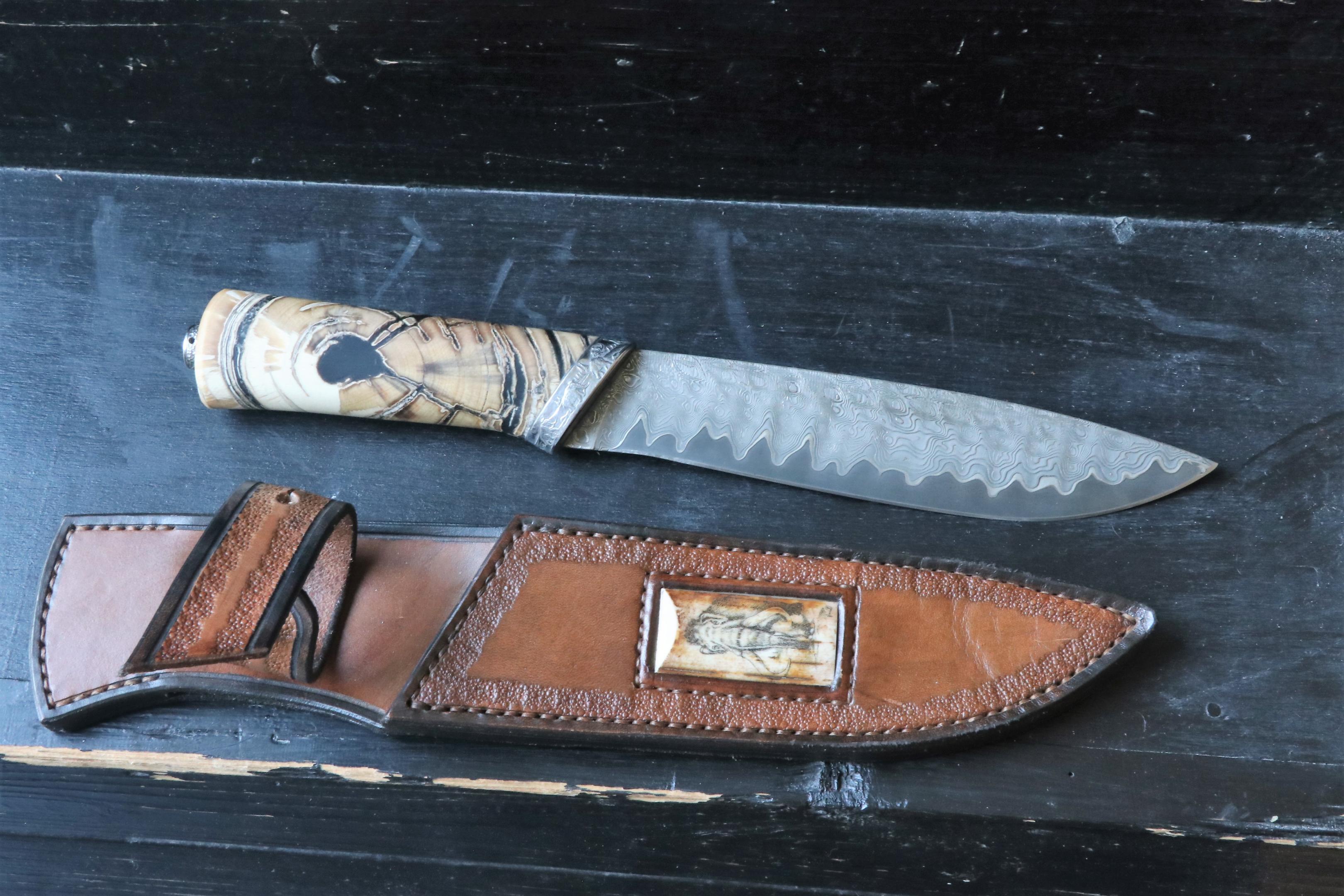 A fixed blade by Imro Poprocký. Th 180 mm blade is from Elmax, the handle is Mammoth tusk.

A folding knife by Radim Dachs, nůž Gen 3. The 92 mm blade is from WG10, the handle is Ertacetal Yuma. 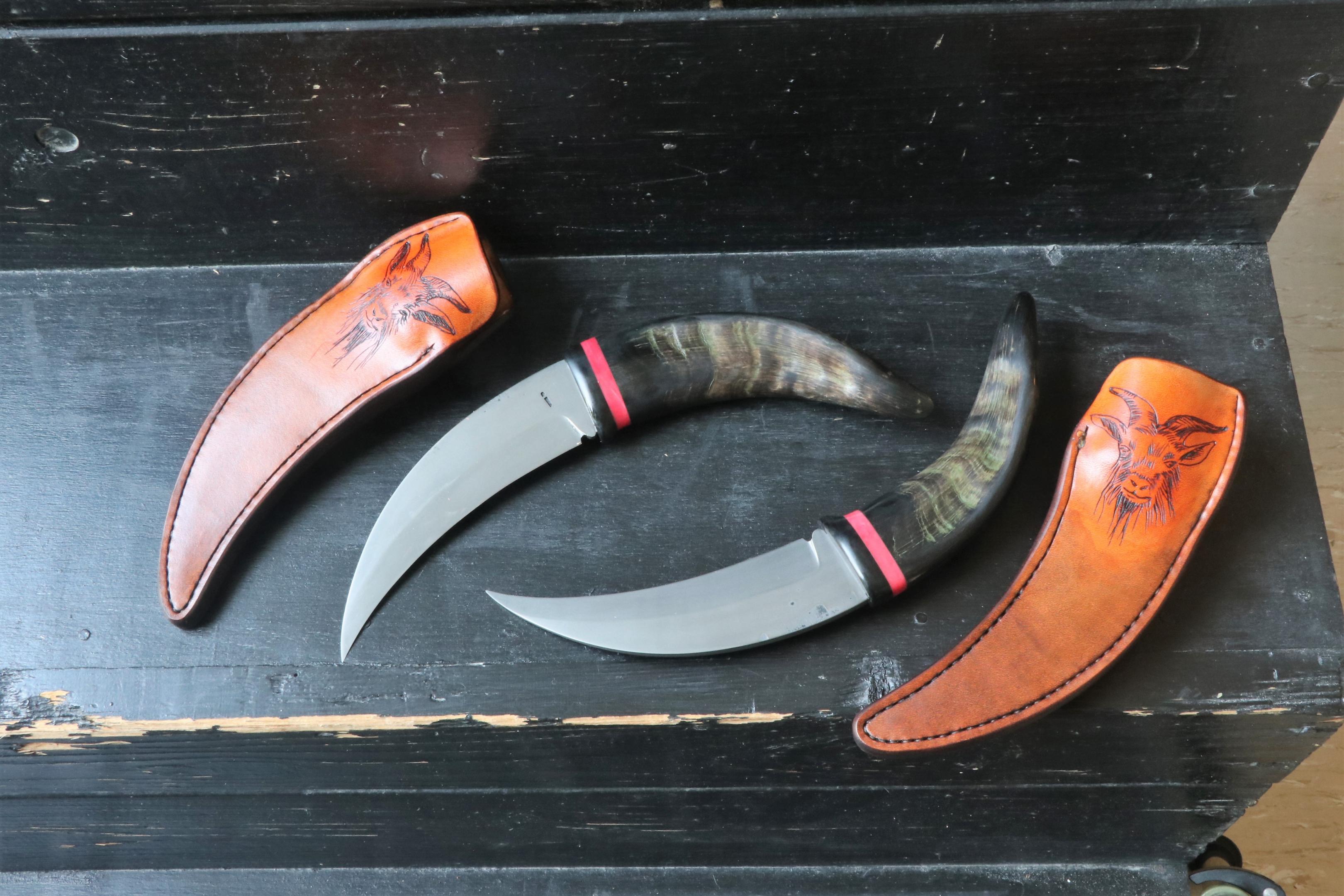 Aleš Karban made these “Goats” knives. They have a 124 mm blade from stainless Wootz and stainless
wootz handles made from horn.

The “Joker” by Štefan Galovič. The 96 mm blade is made from N390 Böhler steel, the handle is from
Yuma, with scrimshaw by M. Horňák. 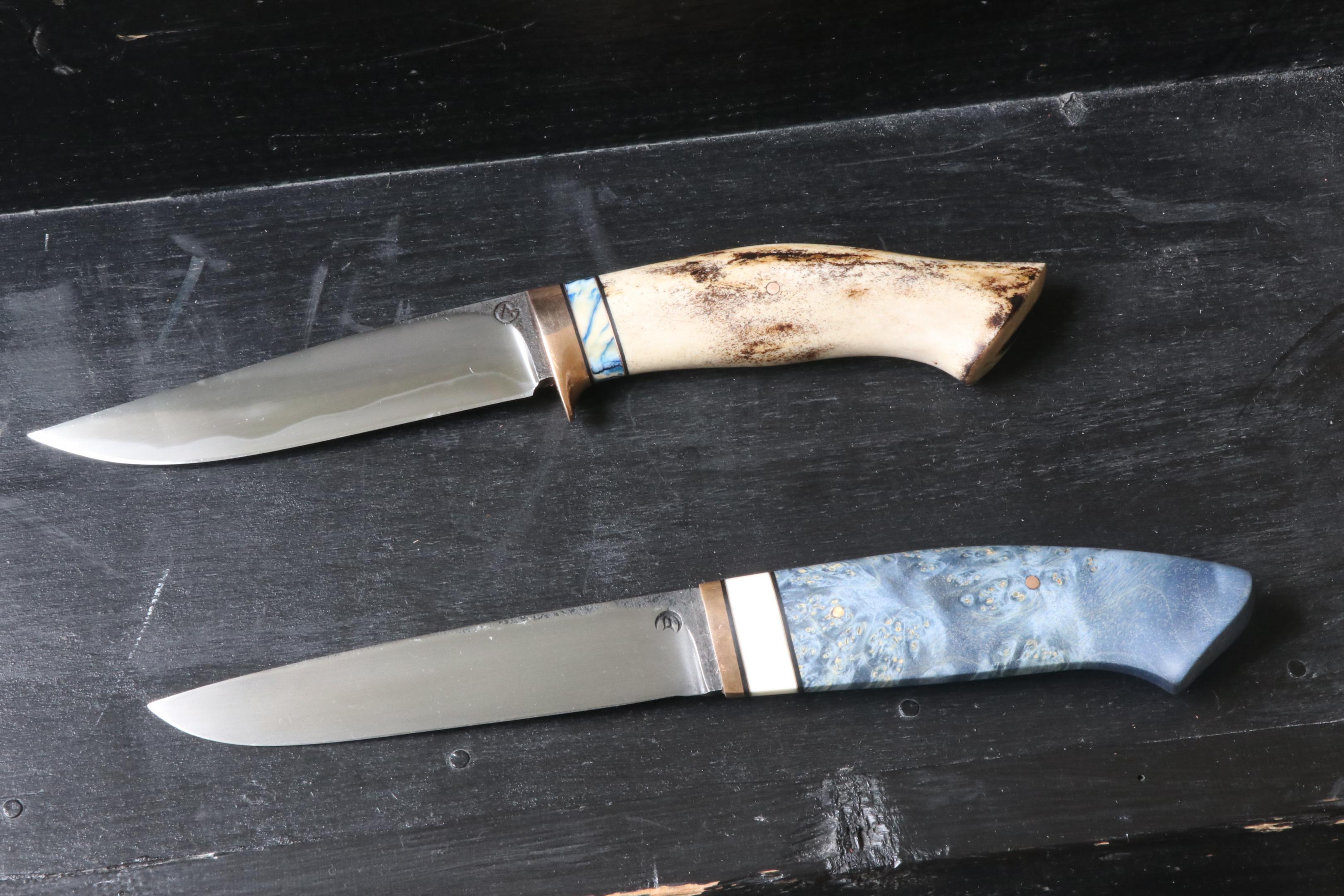 Two fixed blades made by Arkadyi Dabakyan. The upper knife has a 117 mm blade from Wootz and a
Mammoth and Antler handle. The lower knife has a 132 mm Wootz blade and a handle made from Birch
and bone. 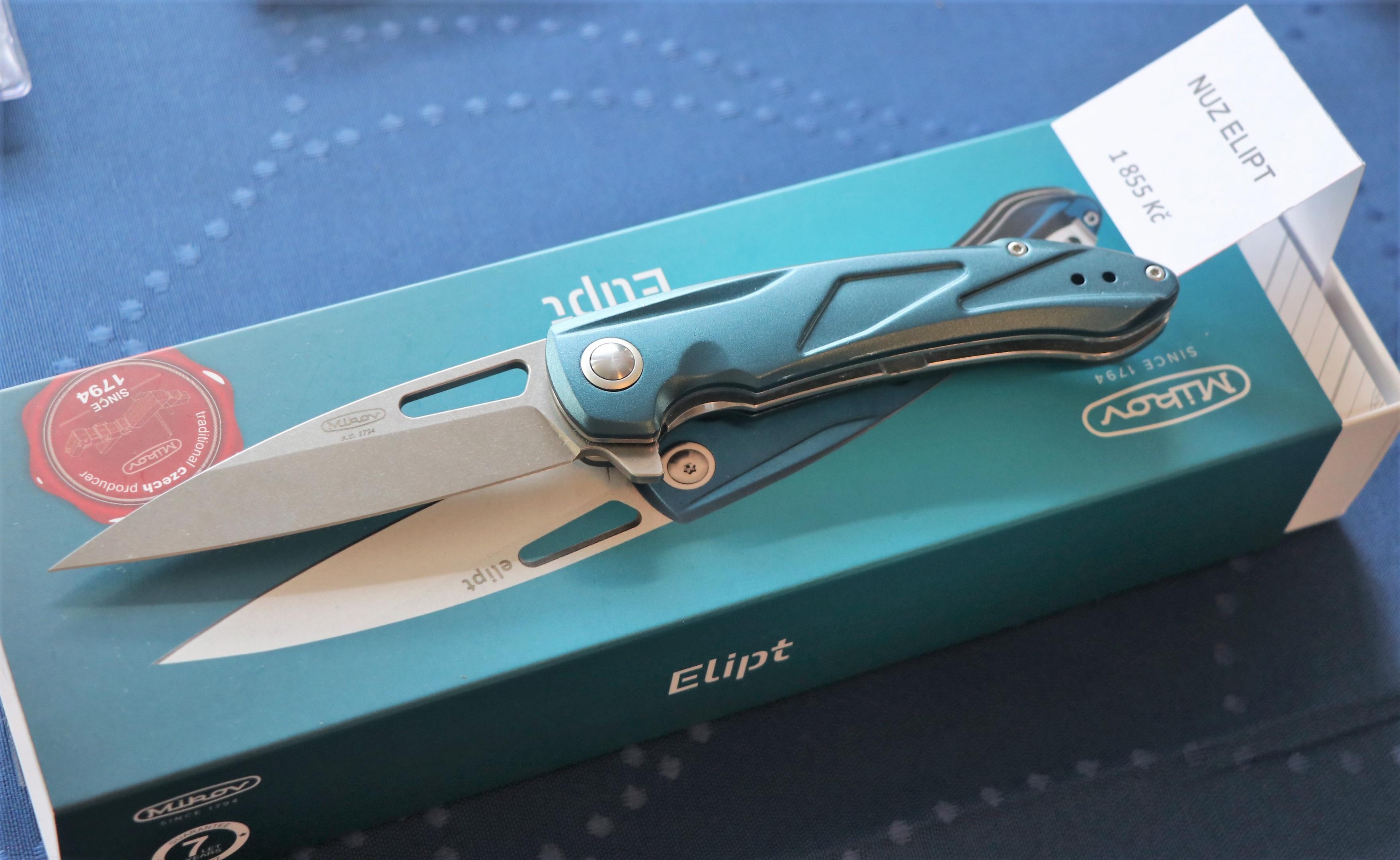 After a long time of undecided toe stepping it seems that Mikov, the large Czech knife producer, is going
strong again. The New Elipt knife is the evidence. 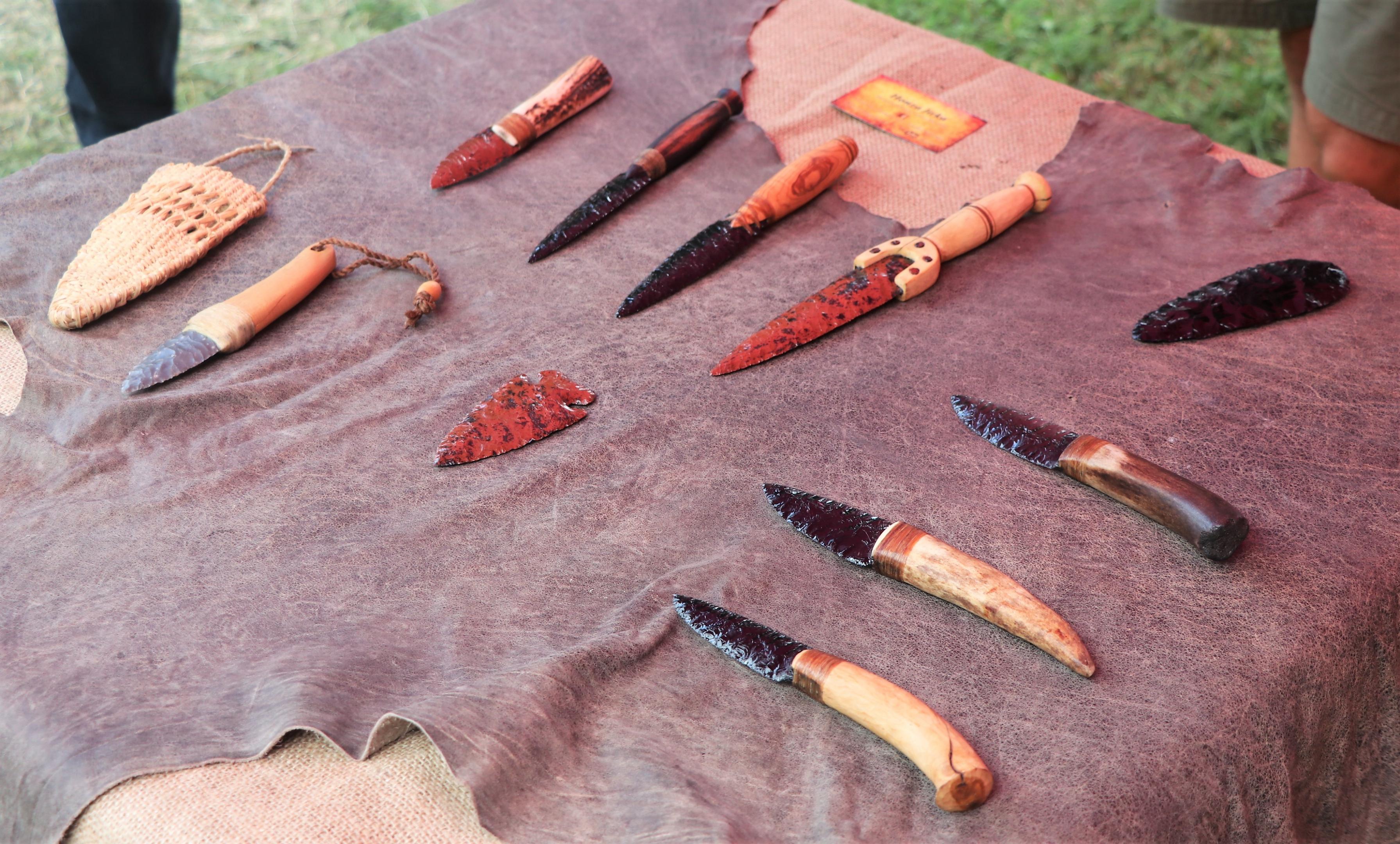 Flint blades are as good as they were in the stone age. These are made by Honza Jirků. 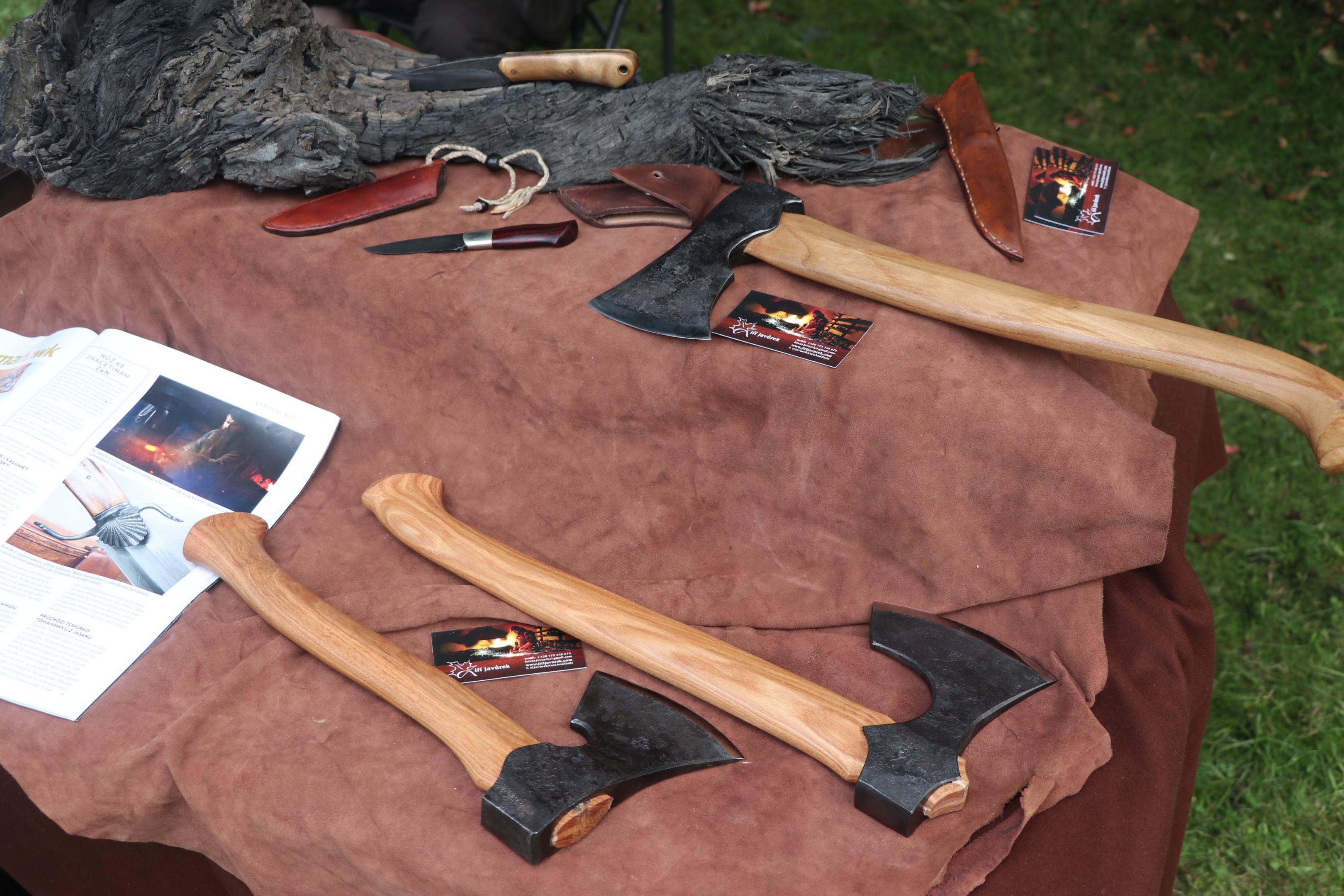 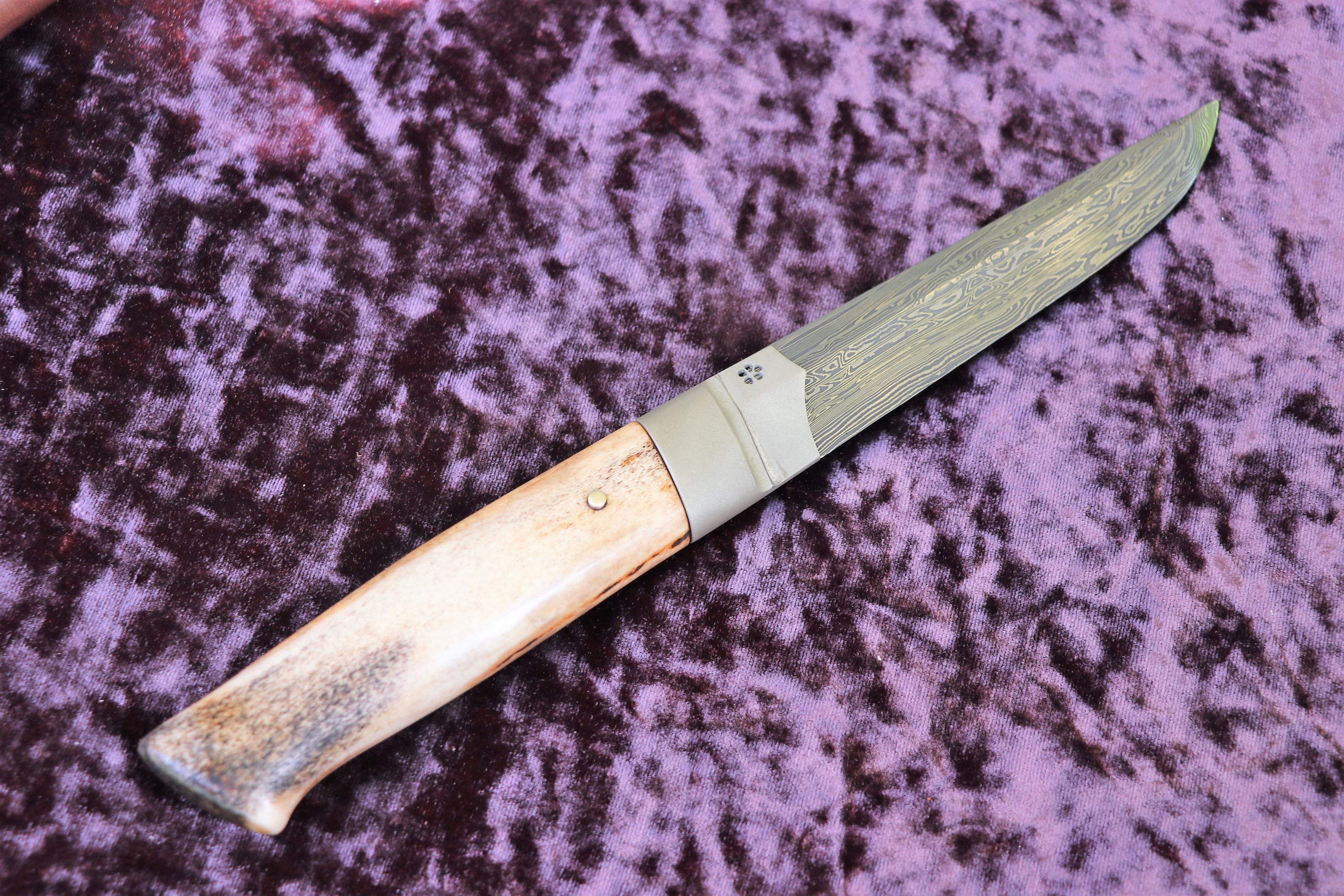 A Japanese style folding knife by Michal „Jakuza“ Jarý. The 95 mm blade is made from AK5, Nickel and
D2, the handle is antler and the fittings are titanium. The bolsters and assembly are in the perfectly
managed traditional Japanese style. Notice the knife maker’s mark (Sakura blossom) broke into the
surface of a bolster. 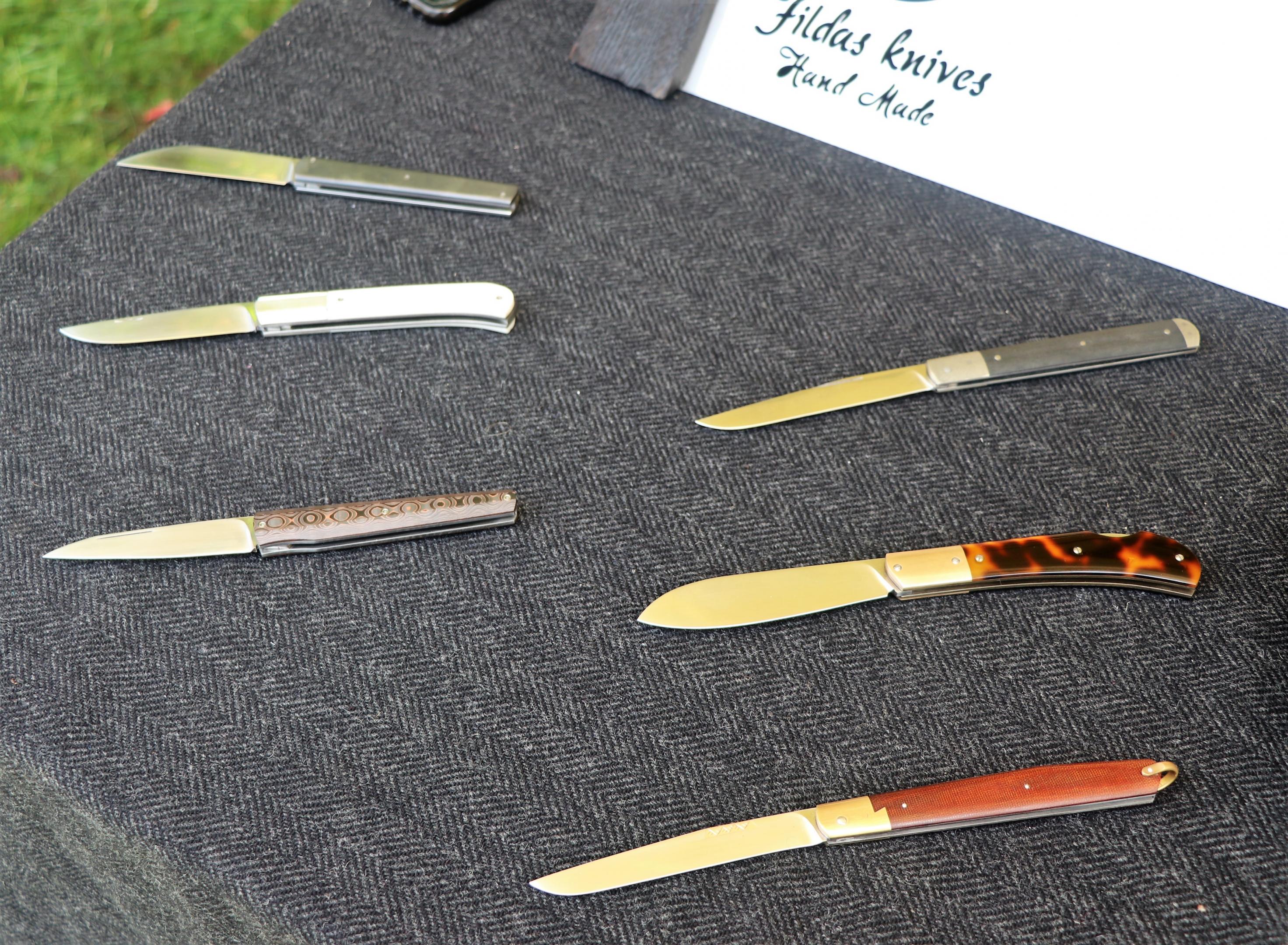 „Filda‘s Knives“ by Filip Koruta are gentleman’s jewels that can be worn even with a white tie.
Our sponsors
Advertisements
Dit is een geprinte versie van de publicatie op