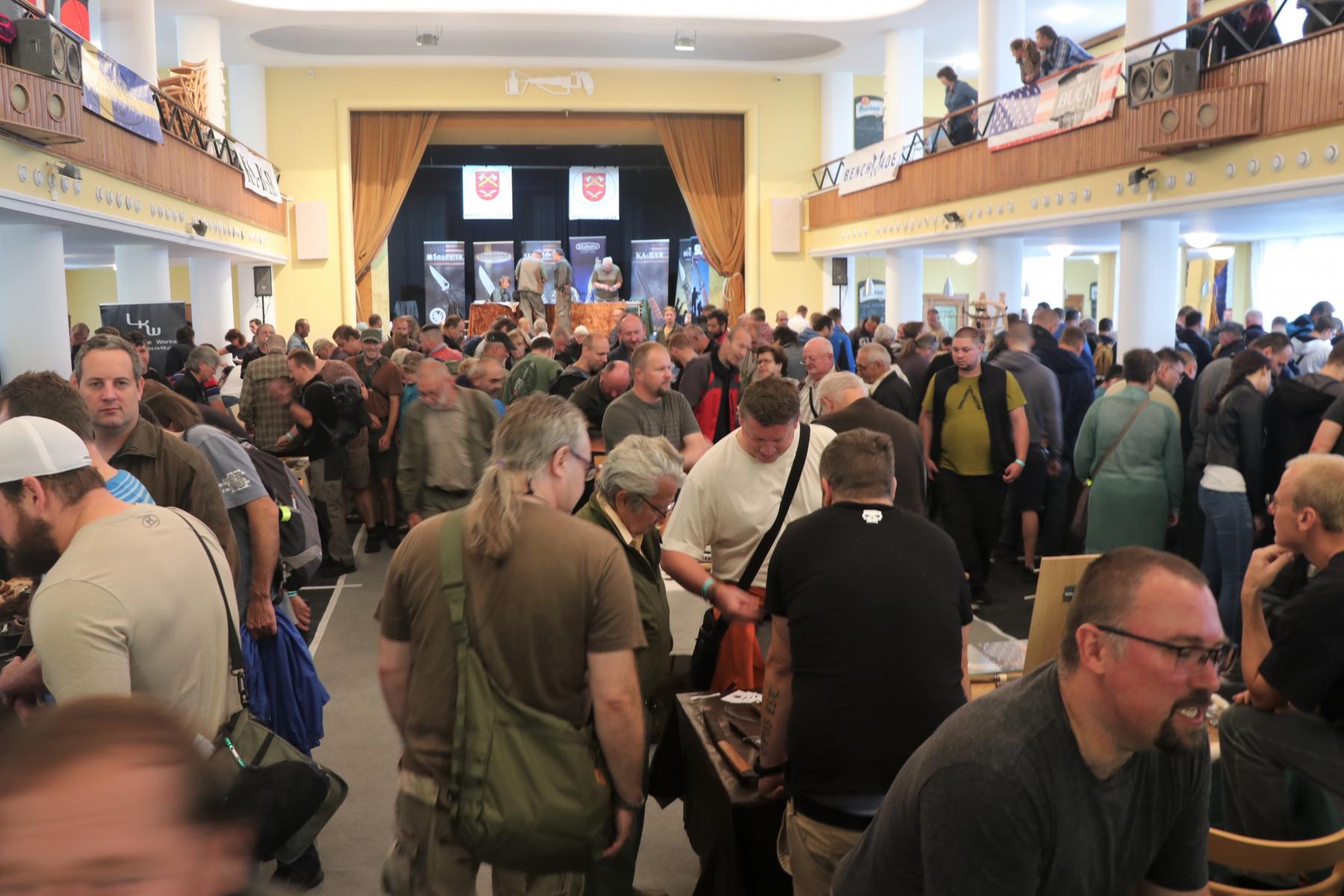 The House of Culture in Příbram, during the knife show. It was busy.
Nože 2019 was already the third edition of the show organized by Viktor Cais. It took place in its traditional venue – the House of Culture in Příbram, some 50 kilometres west from Prague, Czech Republic. The exhibition features two awards. One is the Award of the Myslivost (Hunting) magazine, in altogether 6 categories, and the other is the Award of the Knifemakers Association Bohemia Cultellatores.
The weather was rainy, but this did not scare off neither the visitors nor exhibitors, who also occupied the outer grounds of the venue. Compared to last year, the number of both exhibitors (117 knife makers) and visitors had slightly increased. And it is worth mentioning, that even the newcomers sometimes offered unexpectedly high quality knives. The number of corporate exhibitors grew slightly too, but not significant.

A Viking sword and Sax by The Ulík brothers (SK). The blades are carbon steel Damask, the handle materials
are steel, Copper and Leather for the sword and Antler and Bovine bone and Elm for the Sax.
Especially on Saturday morning the floor was so crowded that it was almost impossible to pass. This year’s exhibition saw an increase in the presentation of swords, mostly Japanese style. One would almost think that the Japanese swordsmiths are moving to the Czech Republic. But the Japanese blades were not the only ones. The Viking sword made by the Ulík brothers (SK) would be a jewel on side of any Jarl and it is almost a pity that such a nicely crafted friend will never sing in battle. The Damask blade and copper and silver intarsia on the pommel were really something special. The Ulík brothers were newcomers at the Příbram show, but clearly demonstrated that they are masters of the trade. 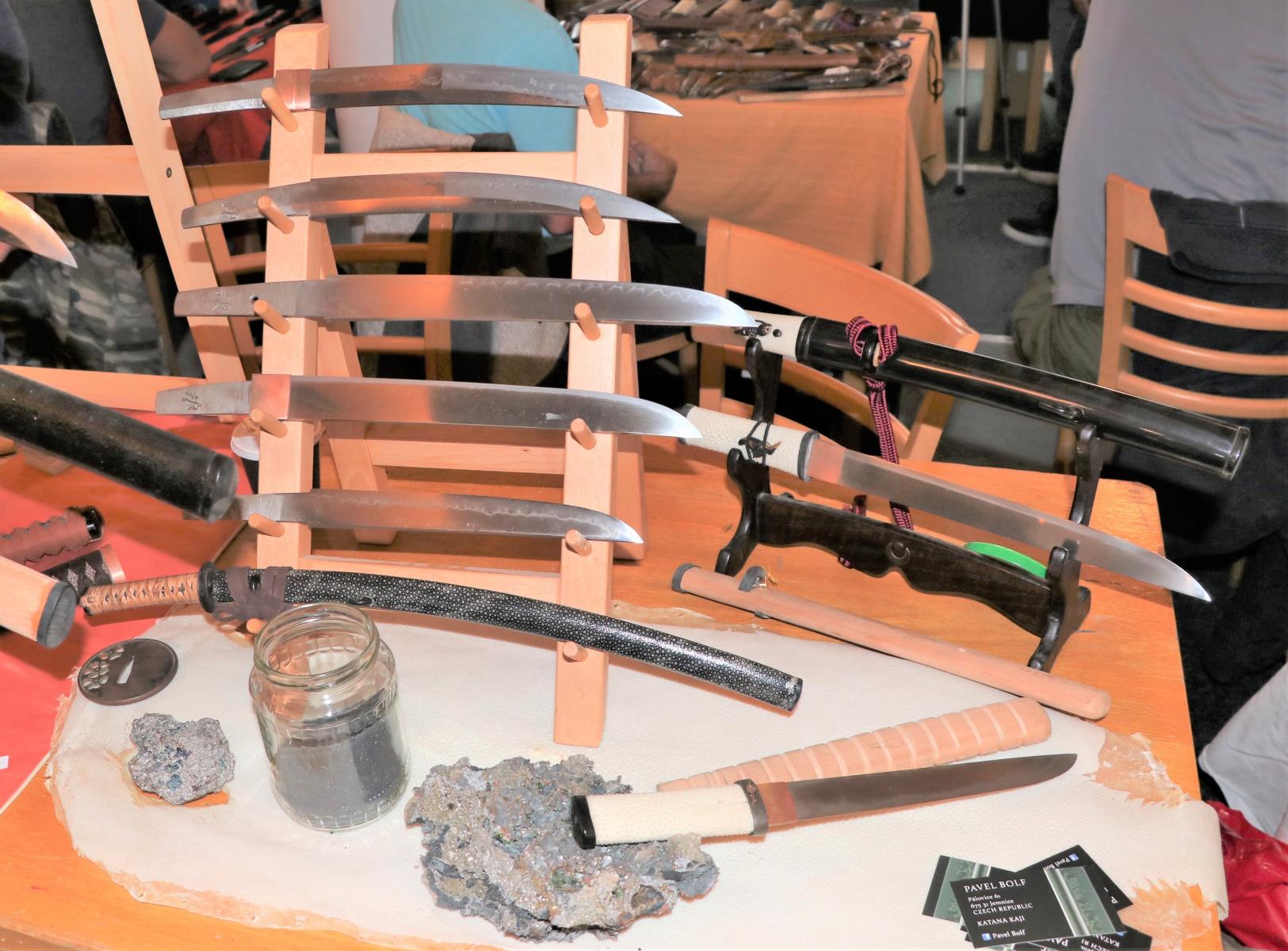 Japanese swords and blades made in the forge of Czech maker Pavel Bolf, according to traditional Japanese technology.
Another mention must be made of the work of Bohdan Chalupný. His cane swords are nice but this year he brought a novelty – a sword in an umbrella. Both the sword and umbrella are fully functional, neither of them is looking weird and the deployment of the blade in an emergency can be lightning fast. A creative and still very gentlemen like item, indeed. 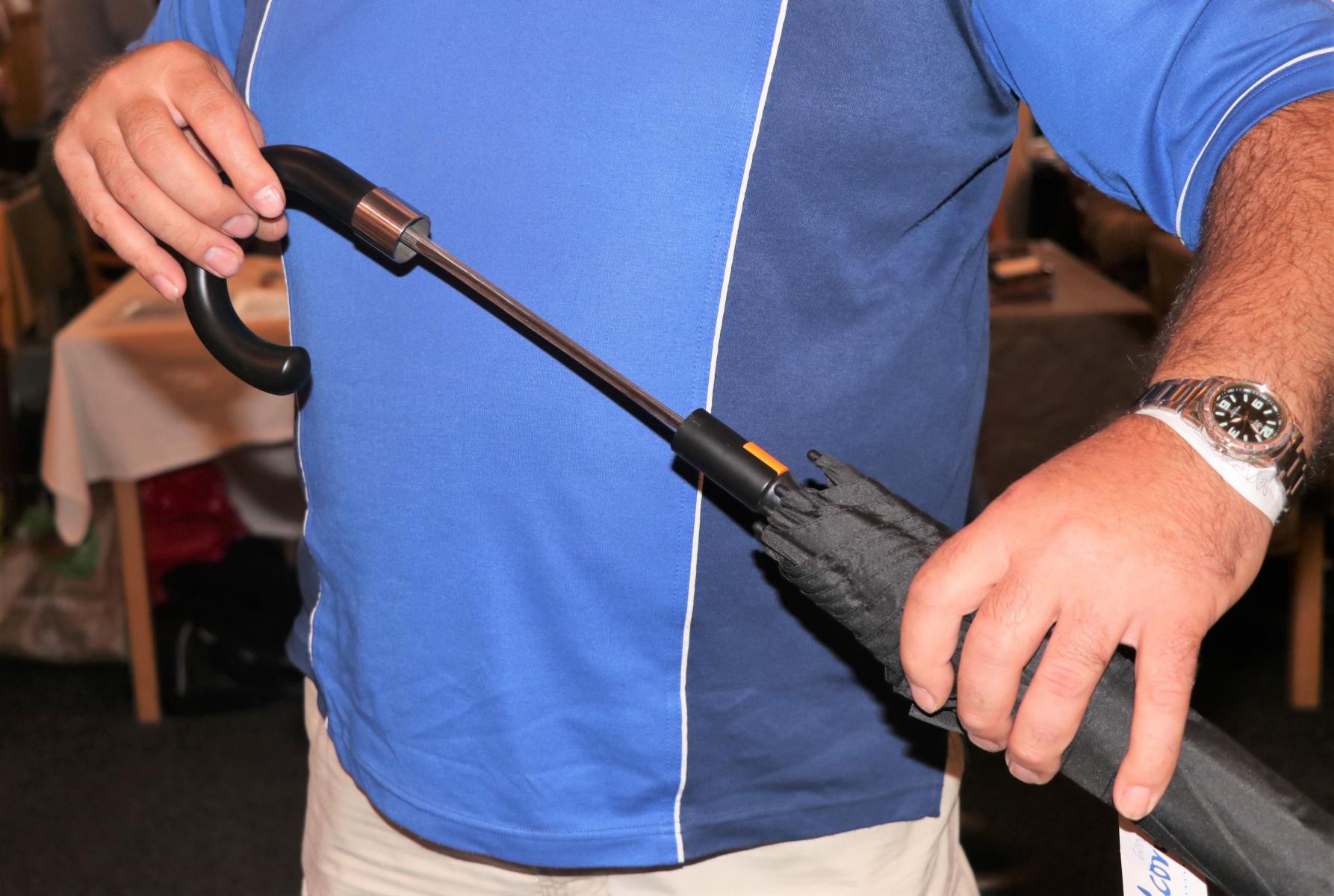 Bohdan Chalupný (CZ) and his umbrella with a hidden blade. This is a modification of the well-known blade
in the cane. 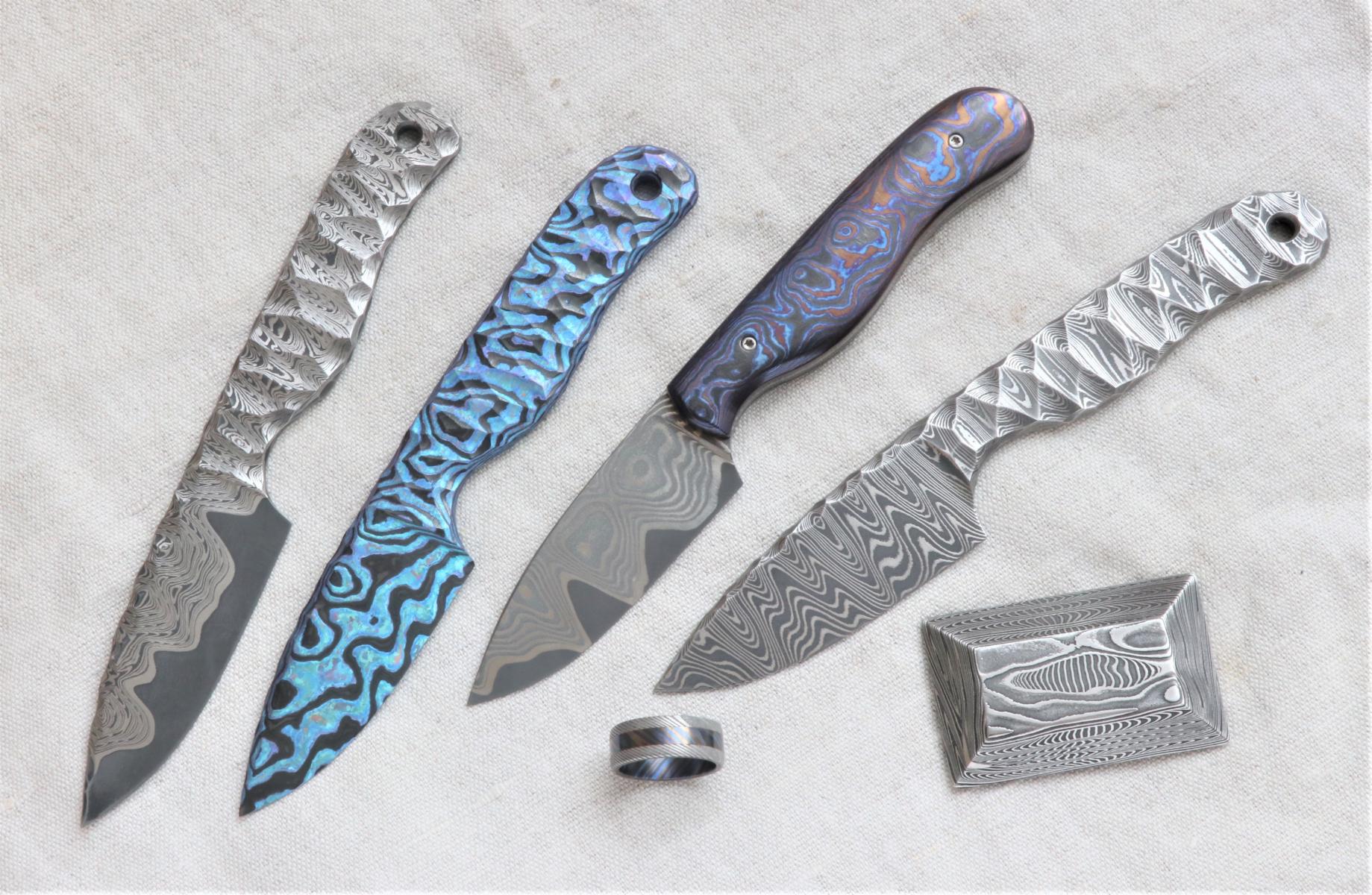 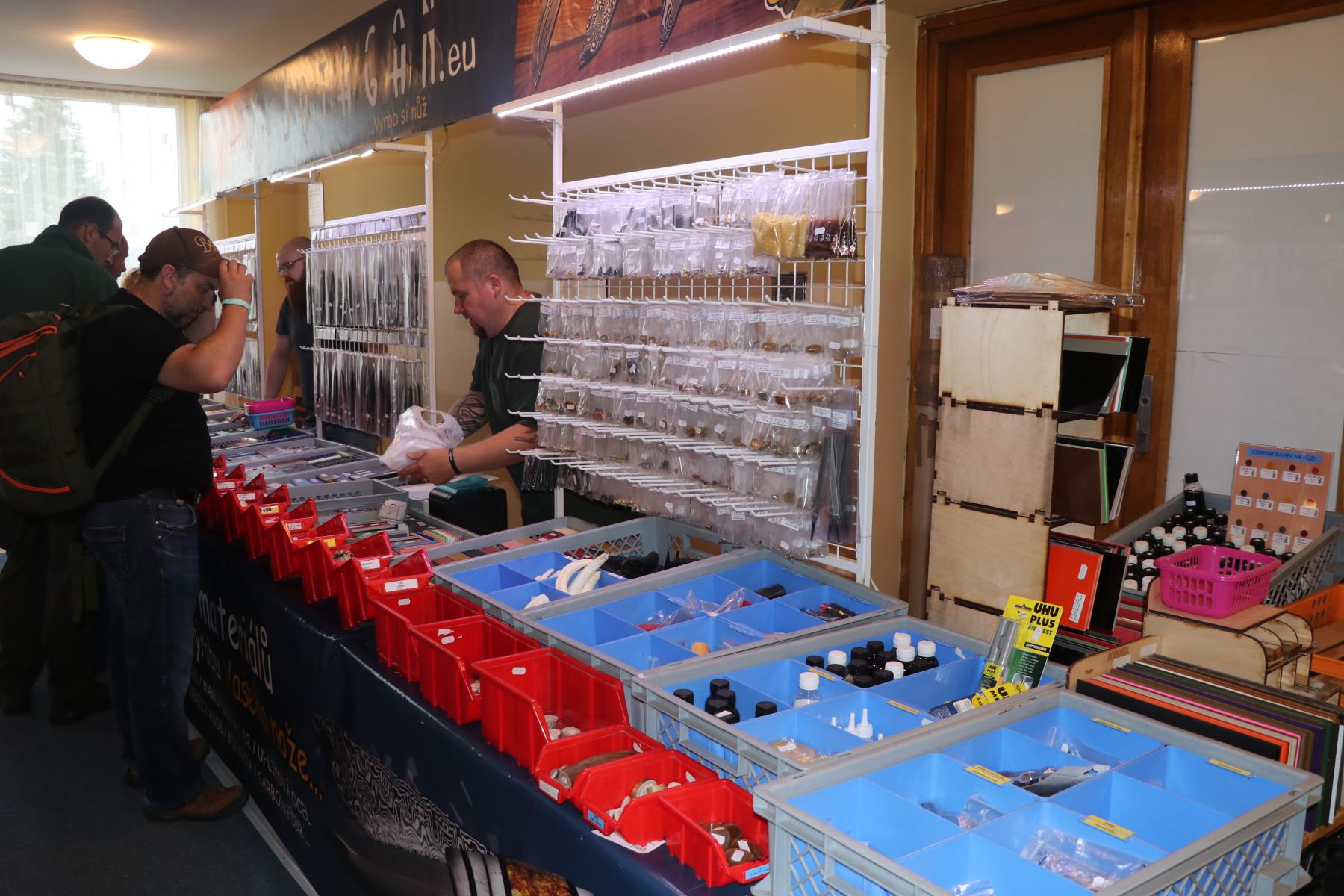 Left: Several knives by Futuron Forge, which combines Damask with other metals.
Right: The booth of Jatagan, the largest Czech shop with knife making materials of every kind.

The Czech knife making community in general has a high percentage of blacksmiths. And what craftsmen they usually are! Blades made from wild carbon Damask are in generally considered as a base, but there is more and more mosaic Damask – for an excellent example look at blades of Pavel Ševeček (CZ), stainless steel Damask and Damask combining stainless steel with titanium, zircon or demanding material as powder steels. An example of these last is Futuron Forge from Jablonec (Gablonz), where the metallurgy is starting to melt with alchemy. Still, when we look carefully to the exhibited knives, most of them have blades made from a slightly alloyed, but not a stainless steel 19 312 (once upon a time famous as Poldi Stabil), in case of Damask combined with the (nickel alloyed) steel 19 655. Their major advantage is relatively simple processing, wide availability and hardening and heat treatment that does not require a strictly controlled atmosphere. Still, if handled properly, they offer a very good cutting performance. They are not only used on hunting blades and daggers, but also on kitchen knives, as shown on the production of S. Mátl (CZ) . The Asian inspiration cannot be denied. 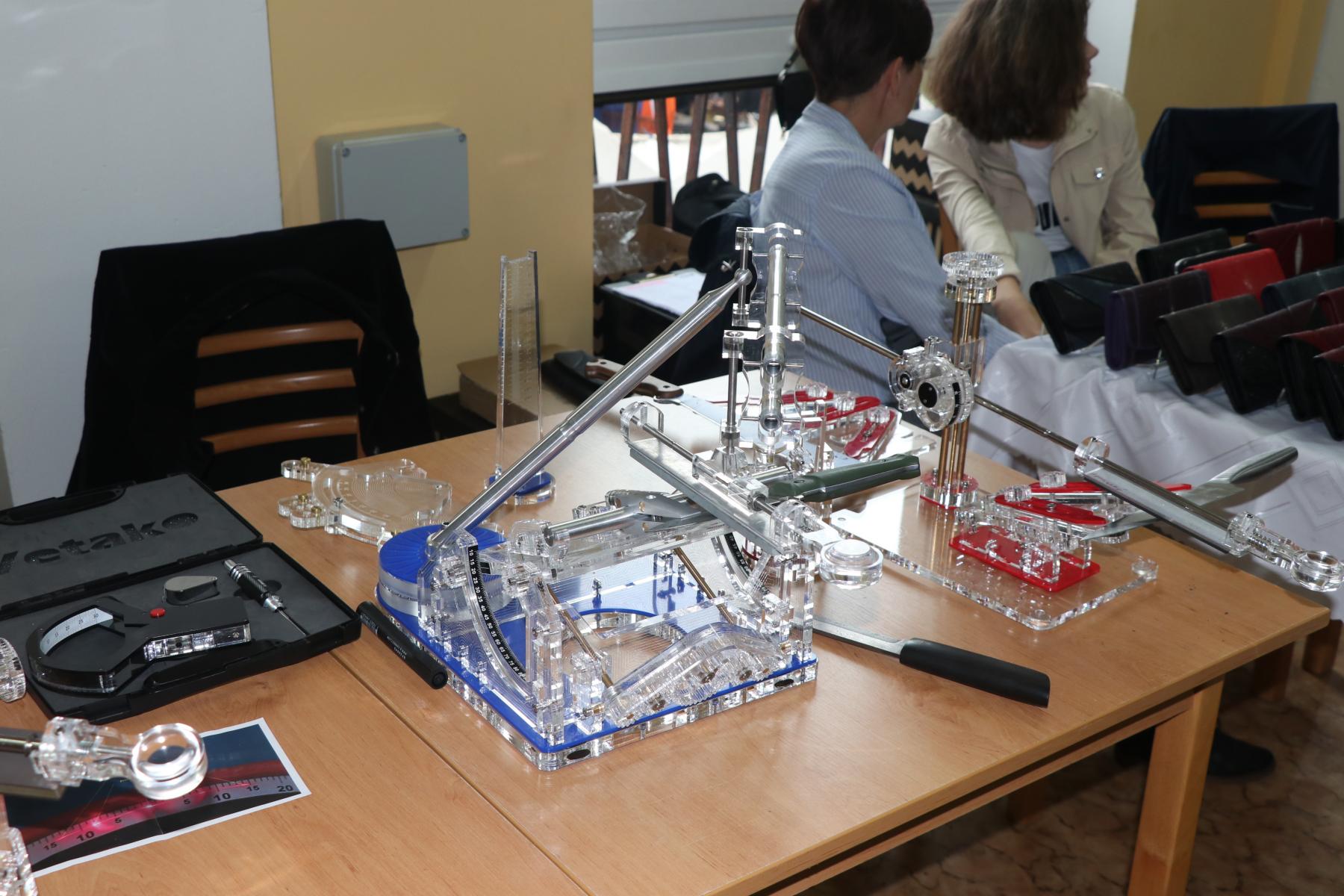 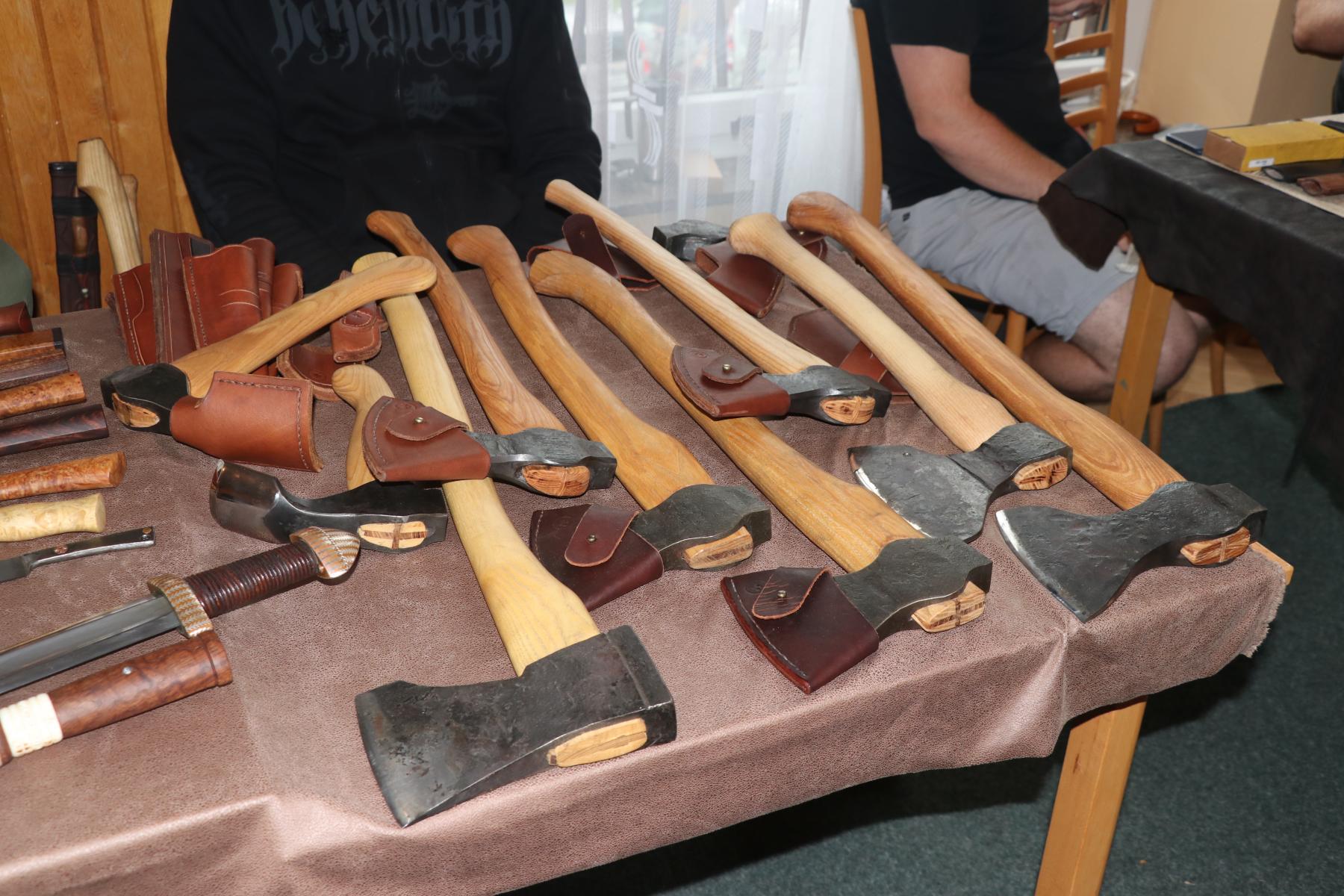 Left: Sharpening system tool by Vetako for precise sharpening and accurate measuring of the blade angle.
Right: Hand forged axes on the table of the Ulík bros (SK). 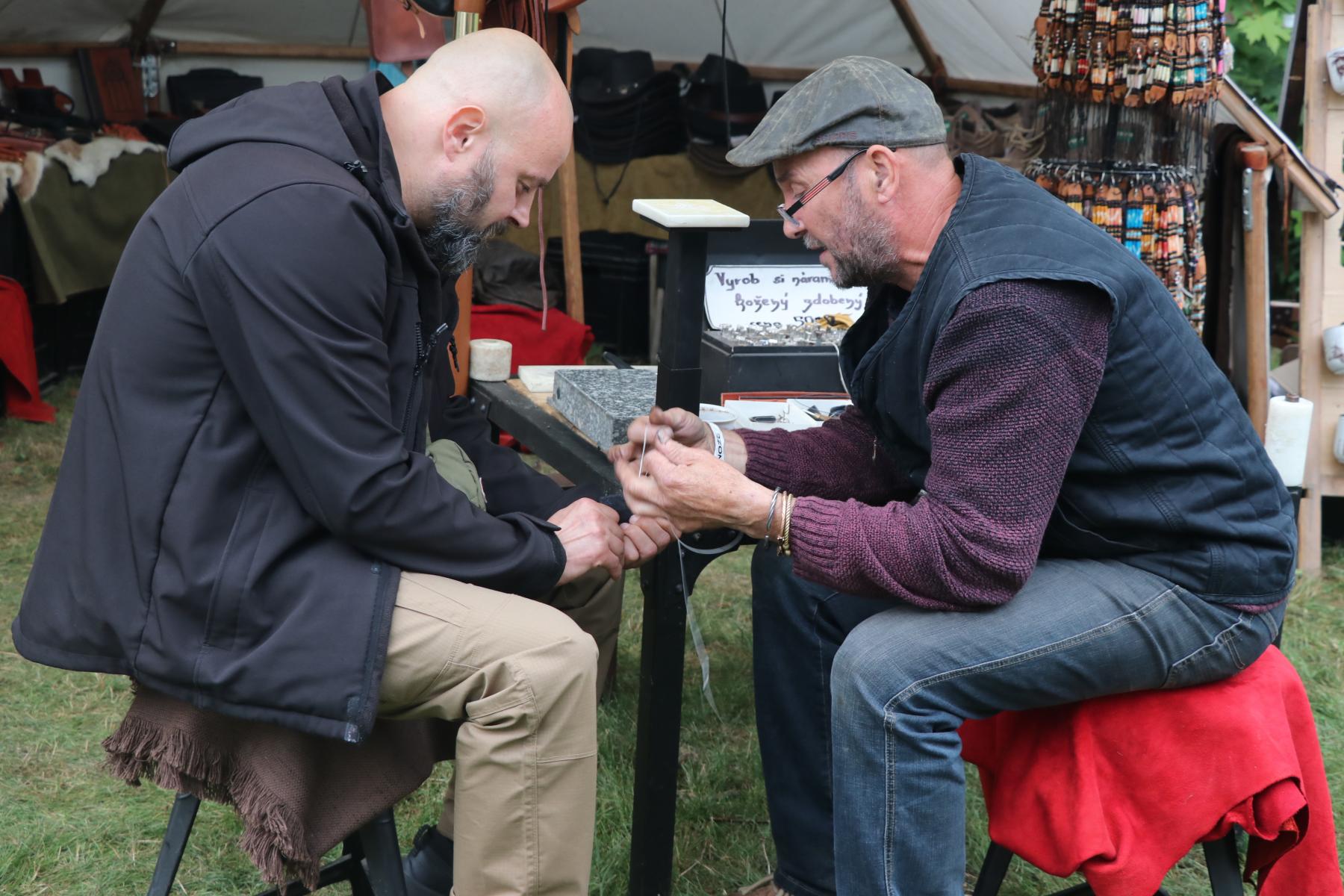 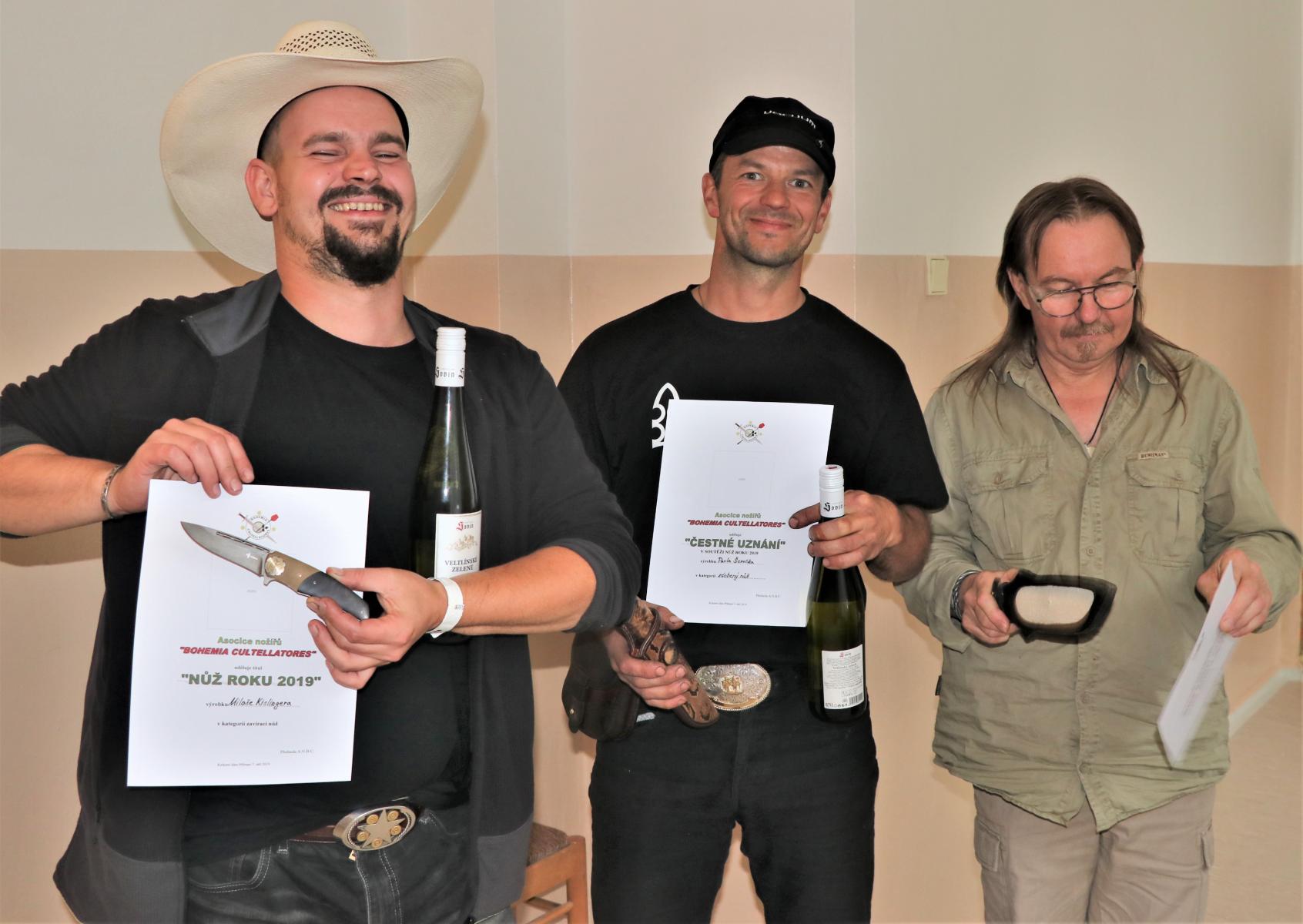 Left: Learning the basics of the trade – a visitor is learning how to sew leather in a professional way.
Right: The winners of the Knifemakers Association Bohemia Cultellatores awards. From left to right M. Kyslinger,
P. Ševeček and M. Dlask. 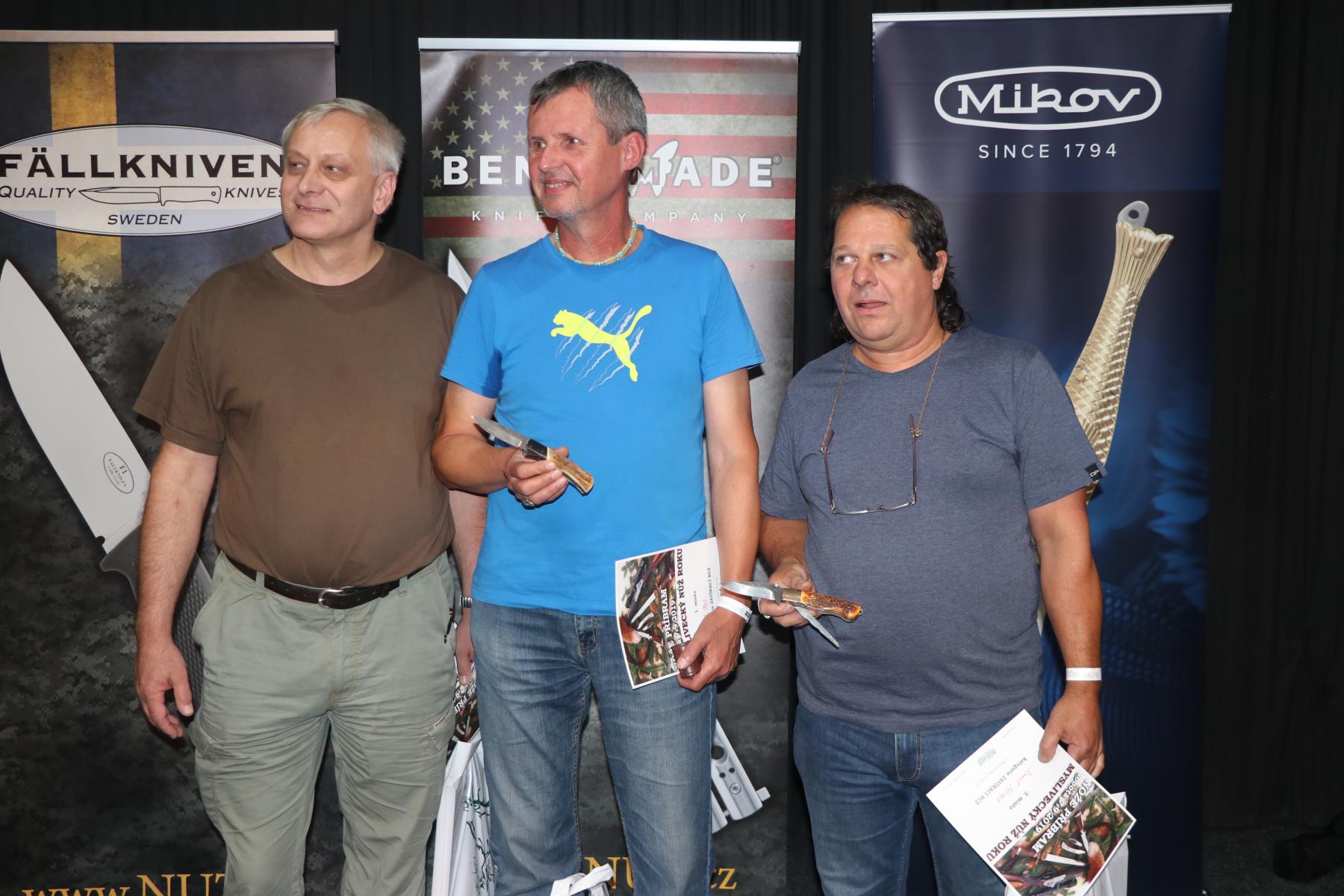 Left: The Myslivost magazine winners of the award for the best Fixed blade. From left to right K. Hons, J. Pajl and
I. Hric.Right: The Myslivost magazine winners of the award for the best Folding knife. From left to right Š. Galovič,
J. Pajl and K. Hons.
The number of booths with materials for knife making grew slightly to four in 2019. The leader of the Czech market is indisputably Jatagan, but the competition is rising. New booths of material dealers were on the lobby of the main floor and on the balcony and you can could find anything you need to make a good knife, stating with stabilized blanks of wood up to stainless Damask by Zladinox or Balbach. And do not forget to buy a belt grinder – the modern knife maker’s principal machine. Worthy of mentioning is the Vetaco sharpening tool – a pantographic device designed to provide absolutely even facets when hand sharpening the blades. We will bring a separate report about it later.

Left: The TOX 95 is a folding hunting knife by Josef Pajl. The 95 mm blade is Damasteel Twist, the saw is from
Wenger and the handle is Mammoth, Titanium and Stainless Damask. The overall length is 220 mm.
Right: The Irbis by Kizlyar. The 82 mm blade is AUS 8, the handle is sculpted silver. The overall length is 199 mm.
At the Příbram show, there was a surprisingly large number of axes, both hand forged and industrially made. The dominant model was the medium sized head, often combining axe and hammer. One who was interested, could find the booth of the Swedish Hultafors company on the exhibition grounds. I saw a visitor there, who by means of the large Canadian style axe (5 pounder) turned a fire log into chops and chops into splinters and these into toothpicks. All while maintaining all fingers and limbs unharmed. Hats off! 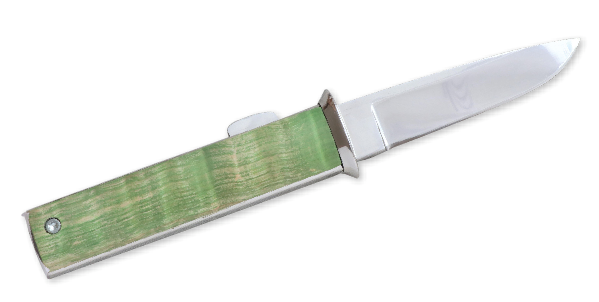 Left: A gravity knife by Bohdan Chalupný (CZ). The blade is N690, the handle material is stabilized Maple. The
overall length is 202 mm.
Right: A linerlock folding knife by Jan Hermach (CZ). The 95 mm blade is from RWL34, the handle is Titanium
and Crocodile skin. The overall length is 225 mm.
Different traditional crafts were present on the outer space. The dominant blacksmithing was accompanied by leather processing. You could buy bags, pouches, purses; you could even learn the basics of sewing leather. In general, the finely crafted artefacts were on the inside, while the more rustically of historicizing, yet fully functional products, were on the grass. Between the small souvenir booths was also a stand of re-enactors of the North American 18th century. Their trading post from days when most of North America was still unmapped and belonged to the Indian tribes is already a traditional part of the exhibition. 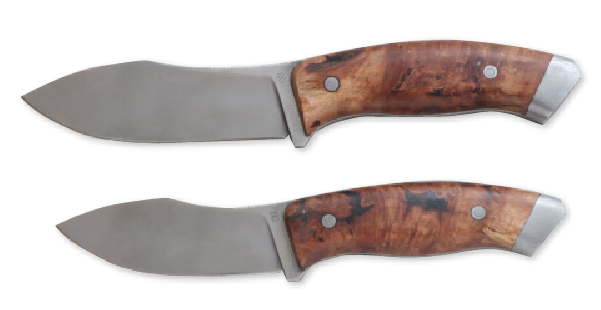 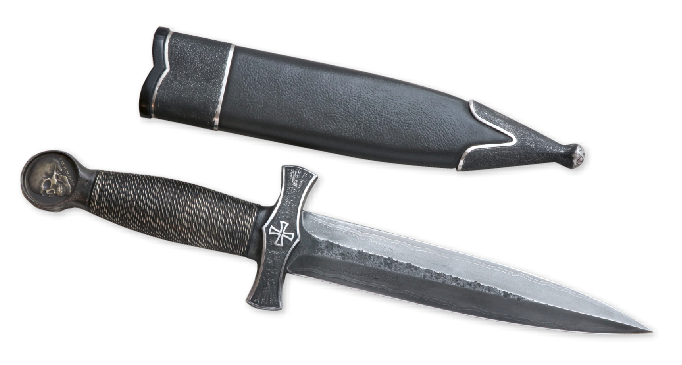 Igor Hric (SK) called this dagger ‘Memento Mori’. The 200 mm blade is carbon Damask, the handle material
is steel and Nickel Silver.
Awards
Back to the already mentioned awards. The knife of the Myslivost magazine 2019 in fixed blade knives category became knife made by J. Pajl, made from RWL 34 steel, blade length 122 mm. Second to this was a knife by K. Hons, also made from RWL 34, blade length 118 mm. Both knives have handle from antler and include a folding saw for pelvis break in. The knife of Mr. Hons has also a telescopic gutting hook. Third in the category was a set of two knives called Carpathian Hunter (He and She) made by Igor Hric (SK). The blades are from Elmax, 104 resp. 124 mm long. Mr. Hric made them to the design of Ing. arch. Viliam Krížik (SK). 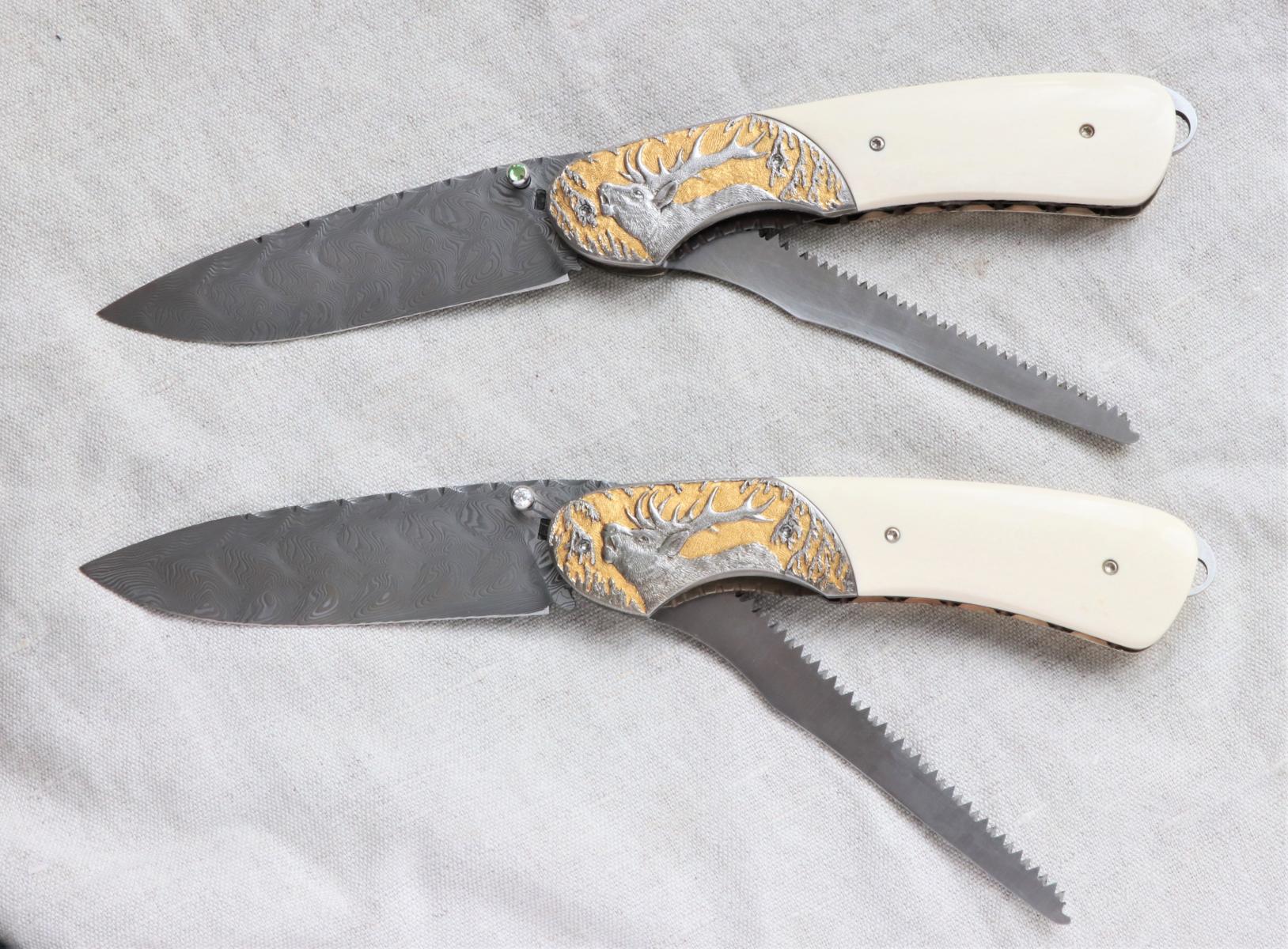 Two hunting knives by Karel Hons (CZ). The 95 mm blades are Damasteel, the handles Mammoth and Steel.
The relief engraving is by R. Pyroutek. Overall length of the knives is 225 mm.
J. Pajl and his knife Tox95 won the category of folding knives (Damasteel blade 94 mm long, Titanium bolsters, Mammoth scales and saw made by Wenger. Regarding the saw Mr. Pajl said: “They are very well made, functional and I don’t have to re-invent a wheel.”) The blade is locked by a liner lock. On the second place was of the folding knife category was a minimalistic, simple knife by Štefan Galovič (SK) with a blade 85 mm long, Oak scales and an Axis lock. In my opinion the  Axis lock is the most efficient lock of today’s folding knives, not only strong and reliable, but also automatically eliminating the play between the pivot and blade in vertical plane. The third Myslivost magazine awarded folding knife was by K. Hons, the blade long 98 mm was from N690 steel, with Mokume bolsters and Antler scales. 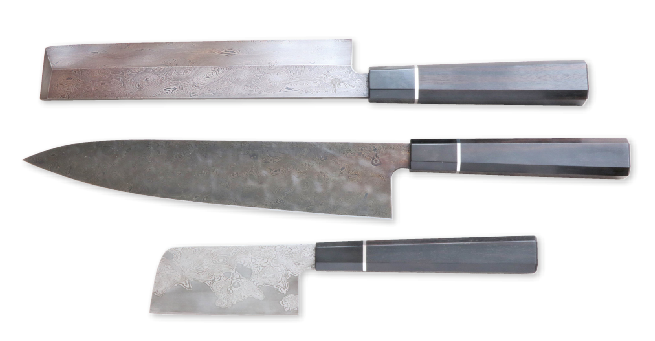 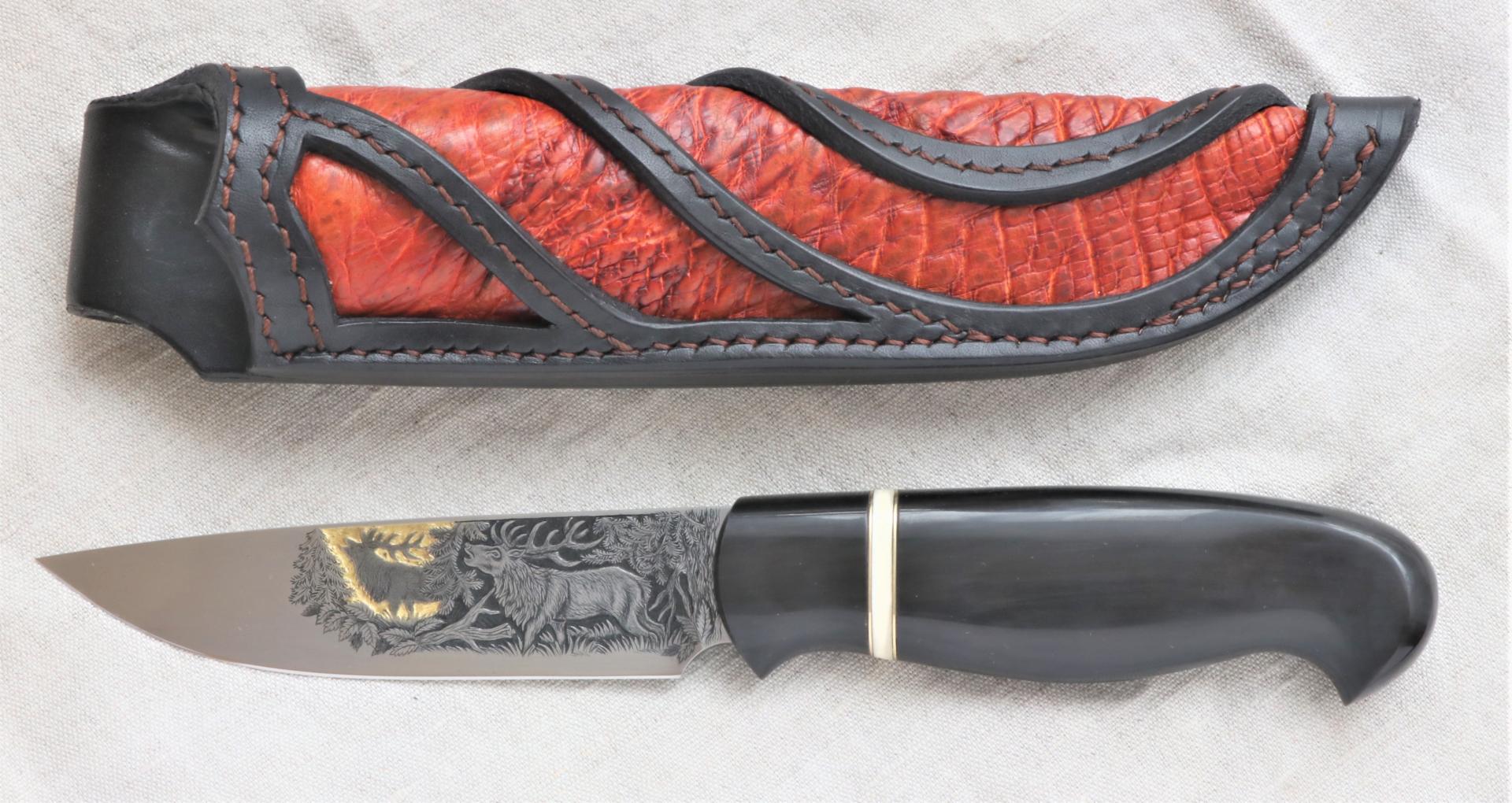 The Západ slunce (Sunset) by Vlada Klihavcová (CZ). The 124 mm blade is RWL 34, the handle is made
from Buffalo horn and Ostrich bone.
Mrs. Vlada Klihavcová won the category of artistic fixed blade knives. The knife named Sunset was from RWL 34 steel and Buffalo horn, Mrs. Klihavcová did the engraving while the knife was made by M. Linda. Mrs. Klihavcová also won the award in 2018. Winner of the Myslivost award in the category artistic folding knife became Jan Hermach and his knife with RWL 34 blade, Titanium scales with Crocodile skin inlays. Second to him was small knife Roe deer by Štefan Galovič (SK). The 65 mm blade is locked by an Axis lock, The handle has scales from Corian (an artificial stone) with an engraved Roe deer head. On the third place was a knife made by K. Hons with blade 95 mm long, made from N690 steel. The bolsters are decorated by the engraved deer head and scales are made from Mammoth bone. The knife is made in two examples, for two brothers. 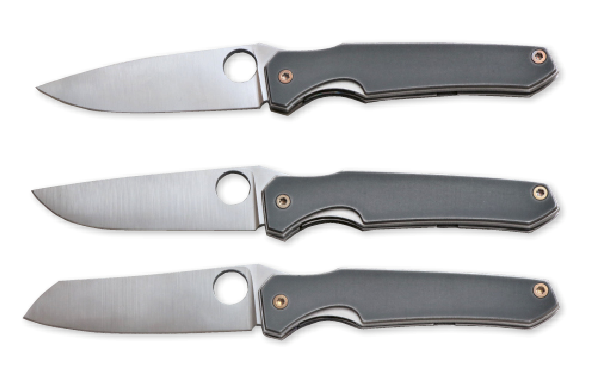 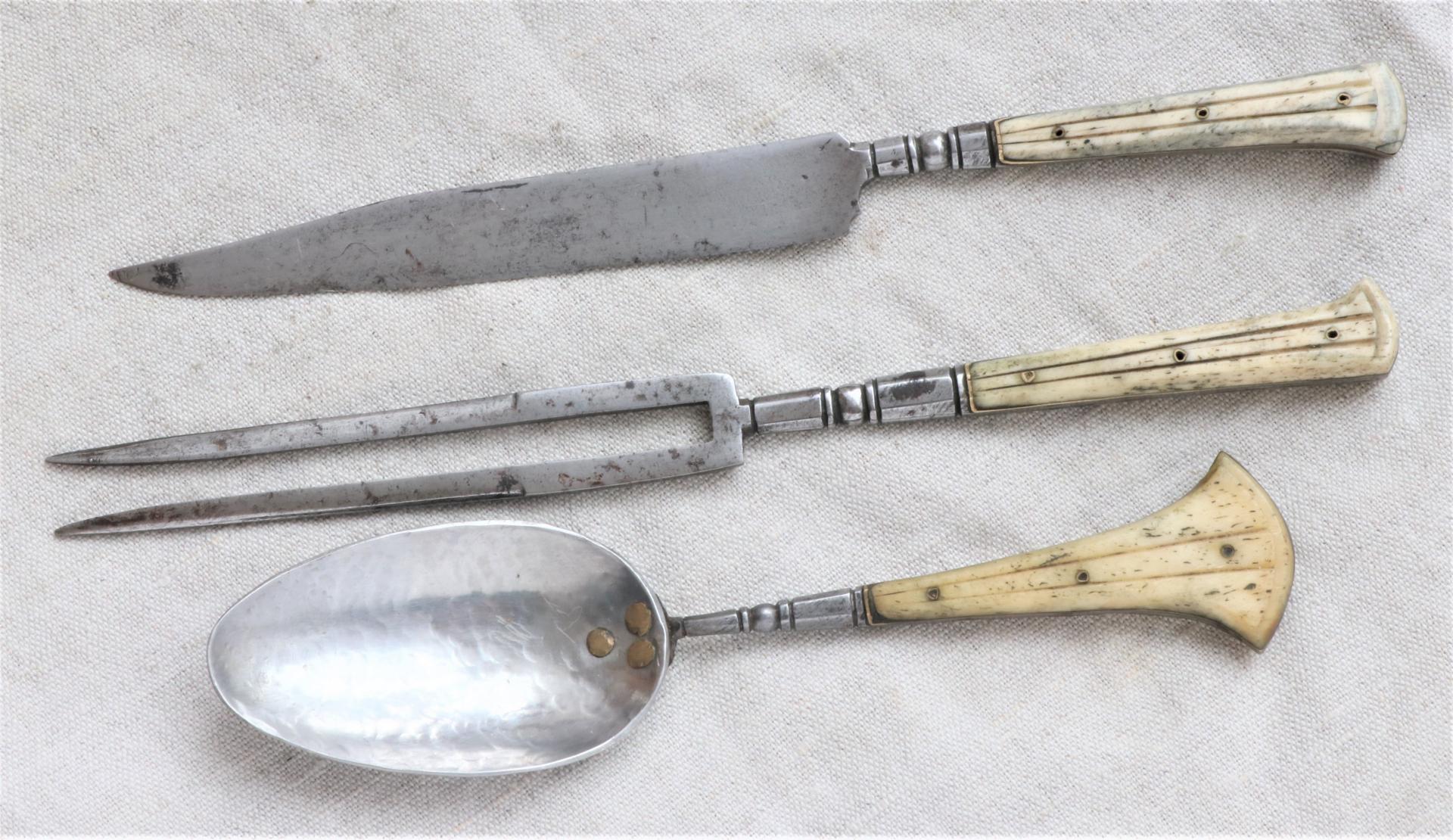 Knife, fork and spoon by Antonín Prošek (CZ). They are made from Carbon steel and Bovine bone.
The Knifemakers Association Bohemia Cultellatores awarded a fixed blade knife by M. Dlask. The 205 mm blade is made from carbon steel Damask with a handle from Moose antler and Mammoth bone. The Award for the folding knife was for M. Kislinger and his knife ‘Wave’ with an 86 mm Zladinox stainless Damask blade, Titanium bolsters and a Desert Ironwood scales. The Award of Merit was granted to P. Ševeček for his knife with a 125 mm long mosaic Damask blade and handle from Maple root. 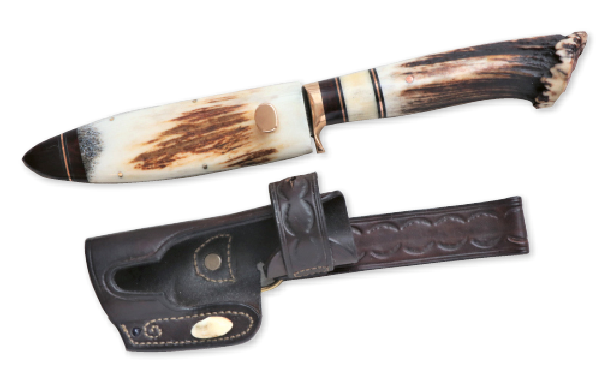 The Lovec (Hunter) by Czech maker Miroslav Pouzar. The 135 mm blade is stainless Damask, the handle
material is Deer antler and Bronze.

To summarize my feelings from this years’ Přibram show – I would say that it remains the largest Czech knife show, although it might be challenged by the Advent Prague, which will be held in December this year. In every aspect, Mr. Cais managed to stabilize the exhibition and continue successfully on what was once founded by Mr. Formánek. By the way, Mr. Formánek still supports and cooperates with Mr. Cais.
It is obvious that Příbram is attractive for knife makers from the Slovanic countries (Slovakia, Poland, Ukraine, Russian Federation) which keeps the prices in bay. It is a sales exhibition, so if you are looking for a fine knife at a good price, here is the place to go. You most likely cannot buy cheaper anywhere to the west. Besides, Czech legislation is very liberal, imposing practically no limits to the law-abiding user.

Left: Filip Ondruška (Hejkal) presented this Nýtař (Riveter). The 87 mm blade is 19 356 carbon steel, the handle material is Brass. The overall length of the knife is 198 mm.
Right: A folder by Kuznitsa Nazarova. The 100 mm blade is carbon & nickel steel Damask, the handle is artificial bone. It is rumored that these kind of knives were issued to the SpetzNaz forces, but I never found any evidence
of it. This one is definitely from a new production that has nothing to do with the armed corps of the former USSR. 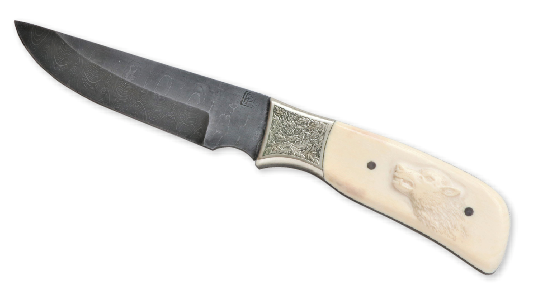 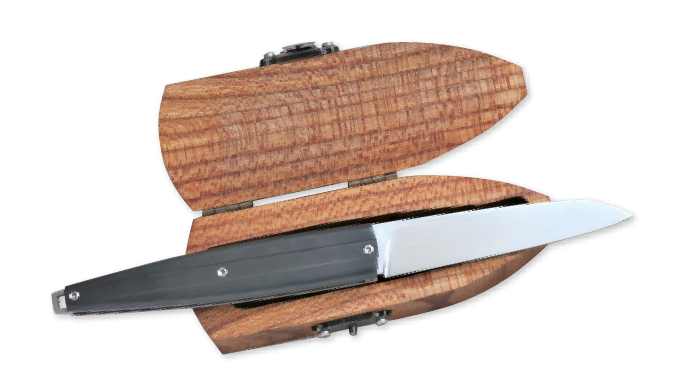