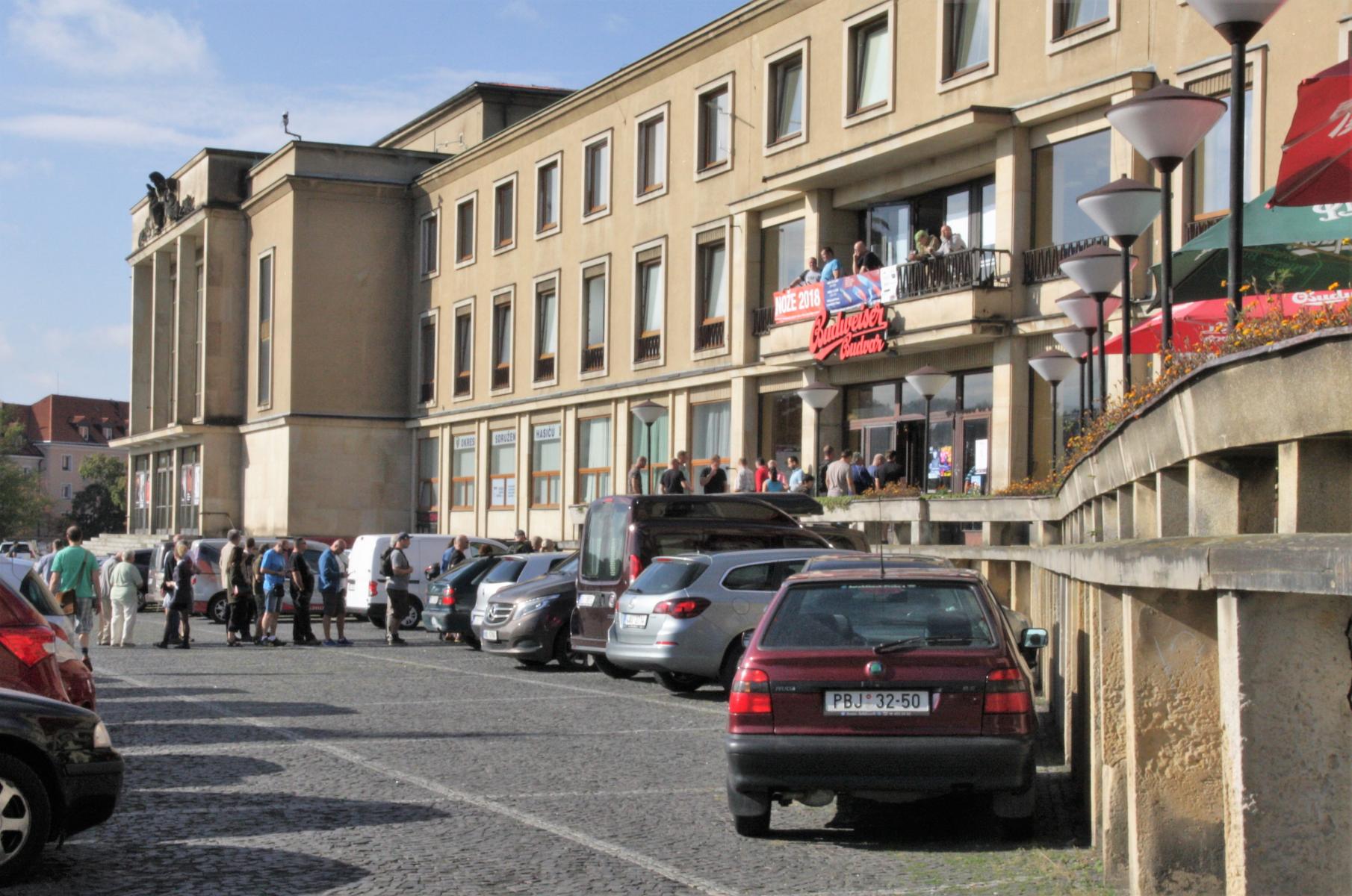 The Příbram knife exhibition is traditionally held in the Cultural hall.
For the second time the primary organizer was Victor Cais, whereas the founding father Josef Formánek only participated in a supportive capacity. At first glance, there aren’t any significant differences between the “old” and “new” shows. One of the major changes is that the organizers are trying enforce a rule that exhibitors have to be present on both days of the exhibition. As a result, and compared to with previous years, the Sunday was another full-value day of exhibitions. However, some of the tables were emptier than on Saturday. 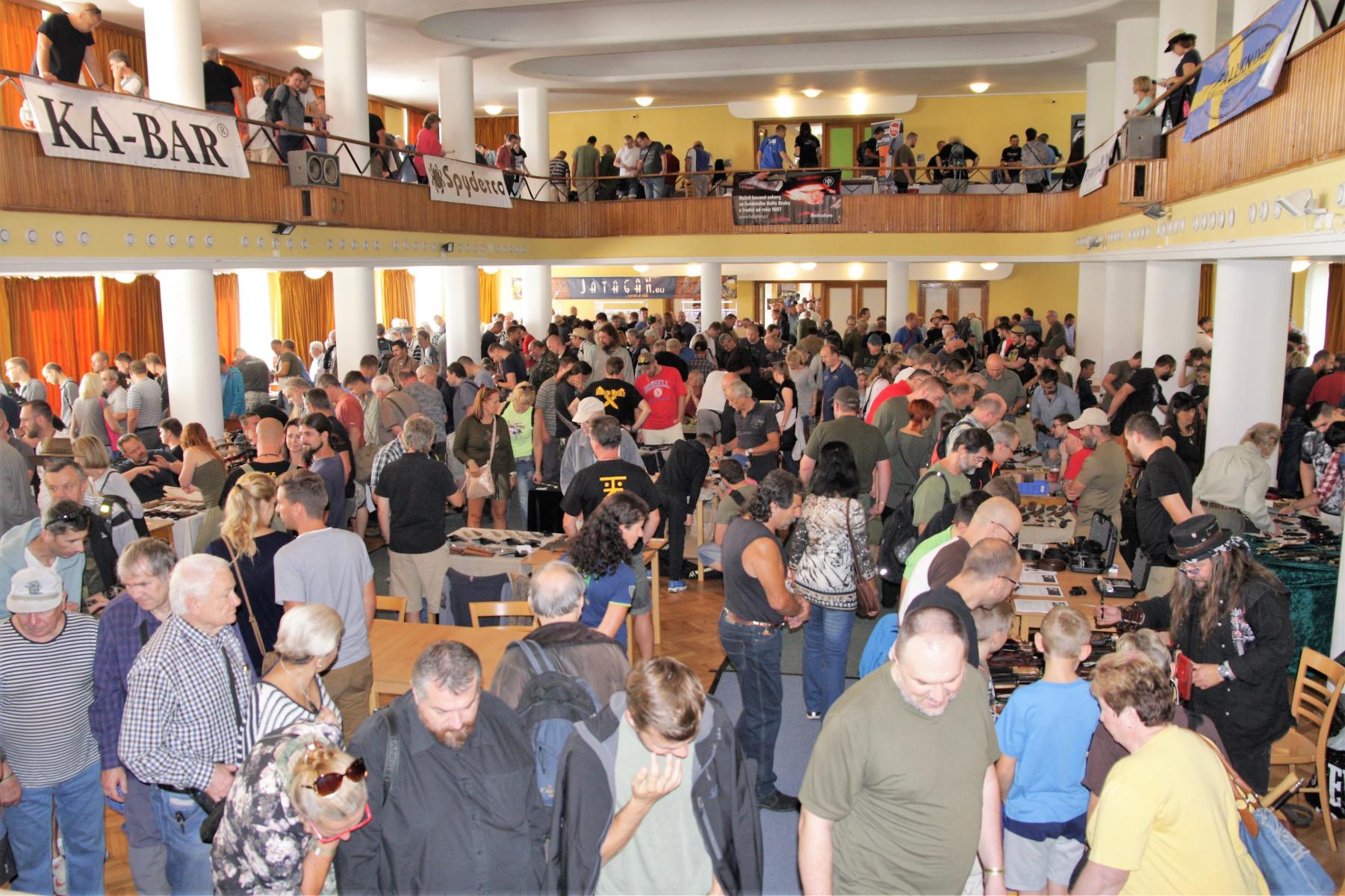 Příbram is the largest knife event in the Czech Republic.
This year, there was just a slight increase in the number of custom knife makers, but the number of tables and booths with tools and machinery has grown remarkably, just as the amount of factory knives on offer. The extent of materials for knife making (steels, antlers, materials for the handles, etc…) has also grown considerably, with Slovak and Polish suppliers beginning to compete with the Czech dominant supplier Jatagan. 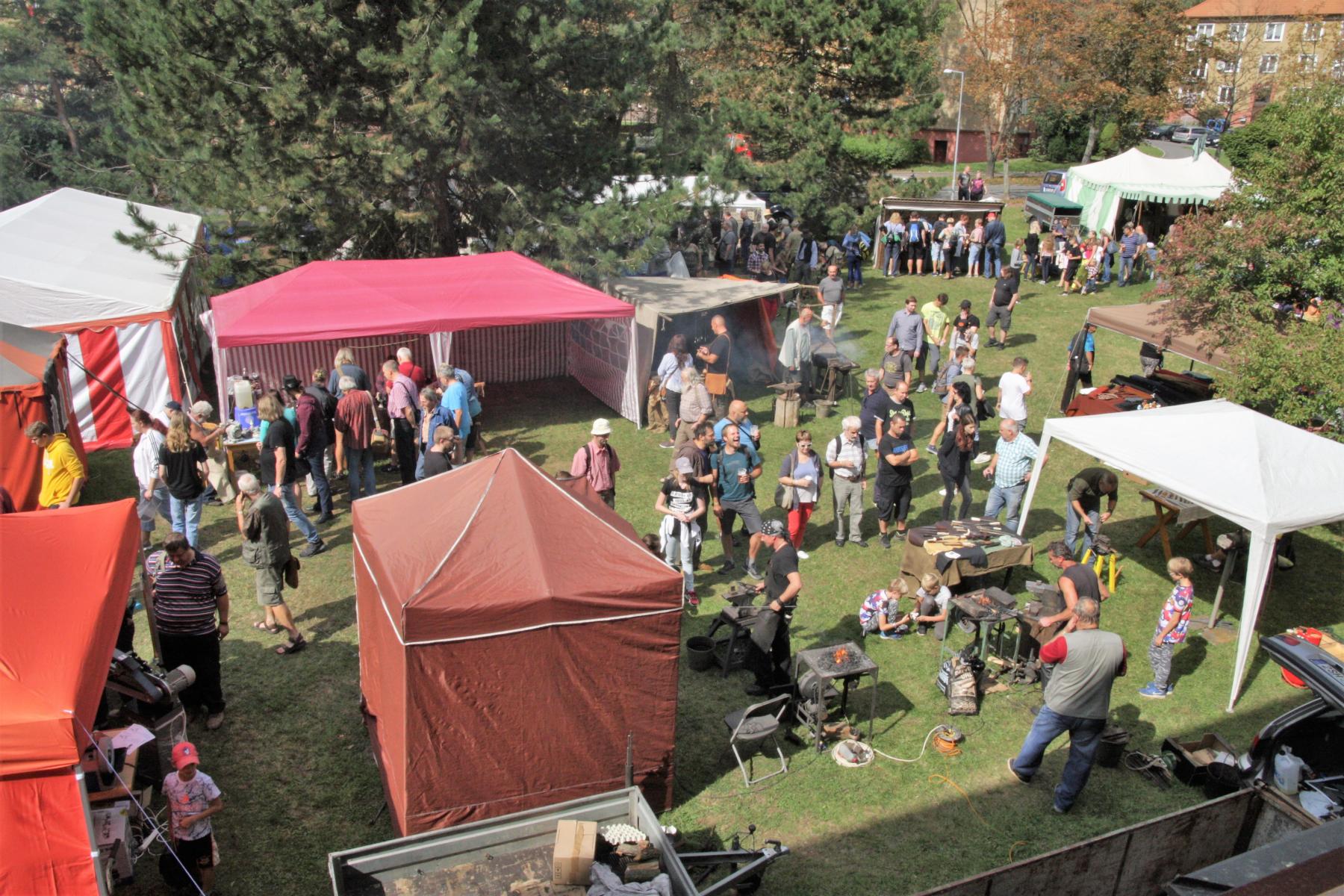 The back yard of the Cultural Hall, with blacksmithing demonstrations, tools and machinery.
Slovakian knife makers are traditional participants of every Czech knife exhibition, but this time they arrived to Příbram in slightly smaller numbers then last year. This year’s Polish participation was weaker than previous shows as well. However, this gap properly filled by a strong presence of knife makers from the Ukraine and Russian Federation. Key to this participation are the personal business contacts of some of the organizers with these countries. Consequently, a couple of really good knife makers from area around Nizhnyi Novgorod decided to take a “… joint trip to Czechoslovakia”. Their tables had a lot to show and offer and these Russian masters intend to come more often. 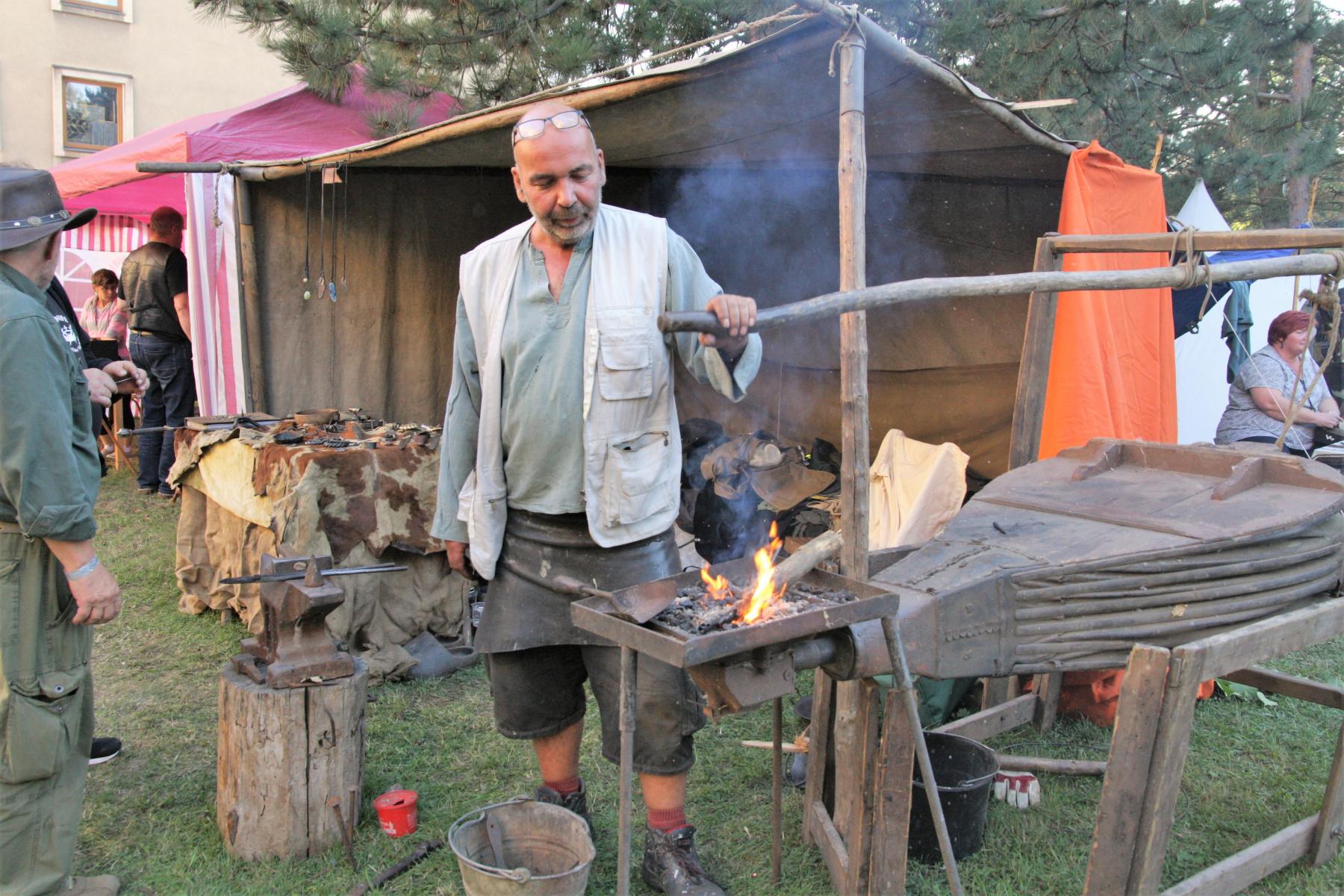 One of the blacksmiths used a historical, hand-blown furnace.
Příbram is a sales exhibition but it also is a conquest, a place of prestigious awards. As one can expect from the national knife exhibition, the “old masters” and “new school” were both present here. From the “old masters” there was a double score for Josef Pajl, from the “new school” especially Miloš Kizlinger and Michal Jarý did very well with their folding knives.
In Příbram there are two sets of awards. The organizers, together with the Czech association of knife makers Bohemia Cultellatores, grant three awards. Jiří Čurda was awarded for his fixed blade knife, with a blade made from mosaic Damascus steel and handle made from mammoth tooth. Miloš Kislinger was awarded for his liner lock folding knife Wave, again with a Damascus steel blade, and a handle combining Damascus bolsters with artificial tortoise. The award for the artistic knife of the 2018 was granted to Josef Pajl for his folding knife ‘Night of an Owl’. On this liner lock the author utilized almost every suitable surface for a very fine plastic relief engraving.

The ‘Night of an Owl’ by Czech maker Josef Pajl won the two major prizes in Příbram: Artistic knife of 2018,
and the prize for best artistic knife from hunting magazine Myslivost. The folding knife has a Damasteel blade,
and a handle of Inox and mammoth. The overall length is 220 mm.

The second set of awards is granted by the leading Czech hunting magazine Myslivost. The award for the fixed blade knife was won by Mrs. Vlada Klihavcová with her knife named ‘Nothernly’ (‘Severáček’). Mrs. Klihavcová is one of the top Czech engravers and worked on the base of the knife made by M. Linda. The Myslivost award for the folding knife was won by Michal ‘Yakuza’ Jarý. The knife has a carbon Damascus steel blade, titanium mokute bolsters and mammoth grip scales. A sapphire eye is inserted in the opening pin. It is worth mentioning that this knife scored the highest number of points of all the evaluated knives and became the overall winner of the Myslivost award. Despite the price, matching the high quality, this knife found its new owner in the second day of the exhibition. 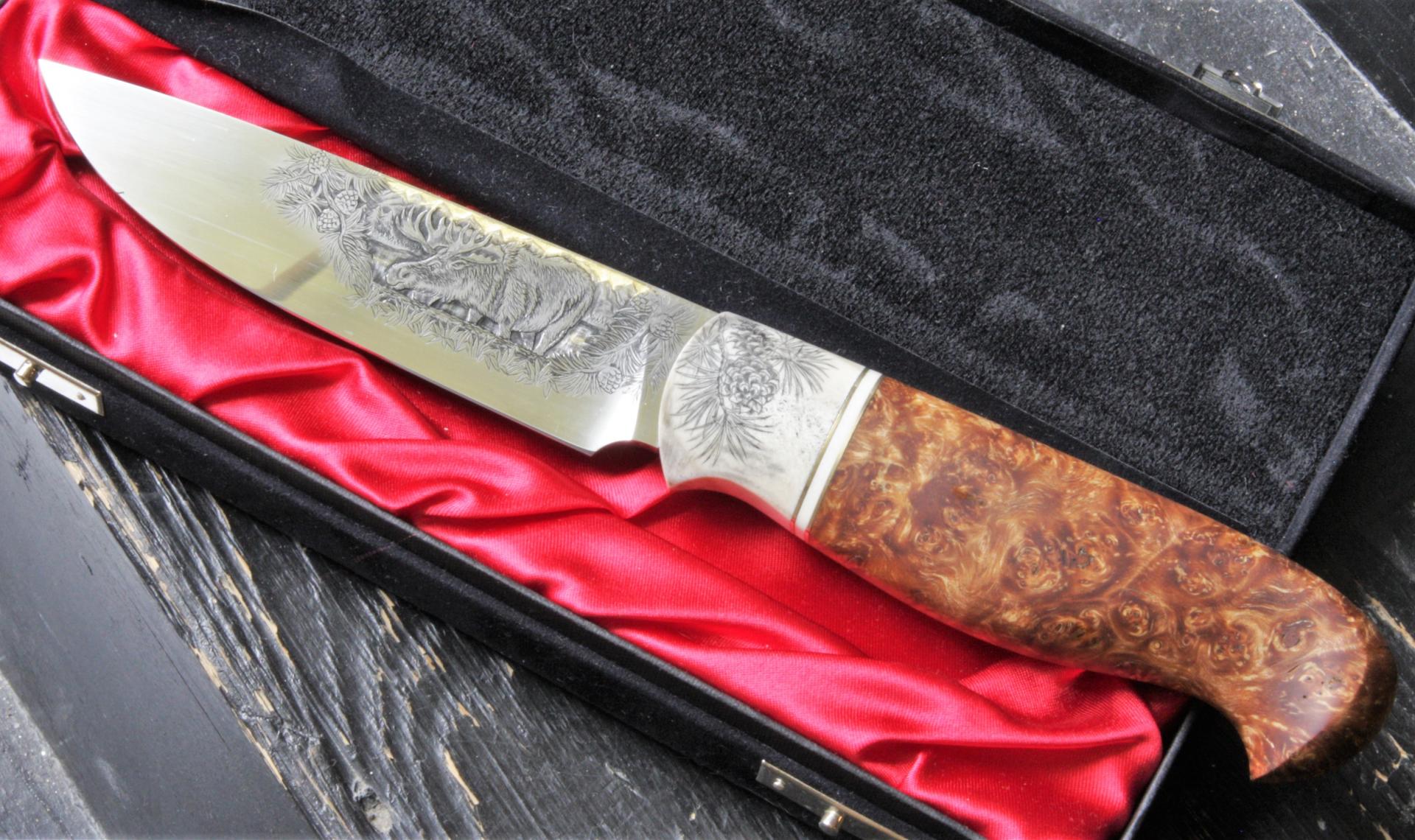 Czech hunting magazine Myslivost award for the best fixed blade was won by Mrs. Vlada Klihavcová with
her knife named Nothernly (Severáček). Mrs. Klihavcová is one of the top Czech engravers and worked on
the base of the knife made by M. Linda. The blade is RWL and the handle is stabilized maple and reindeer
bone. 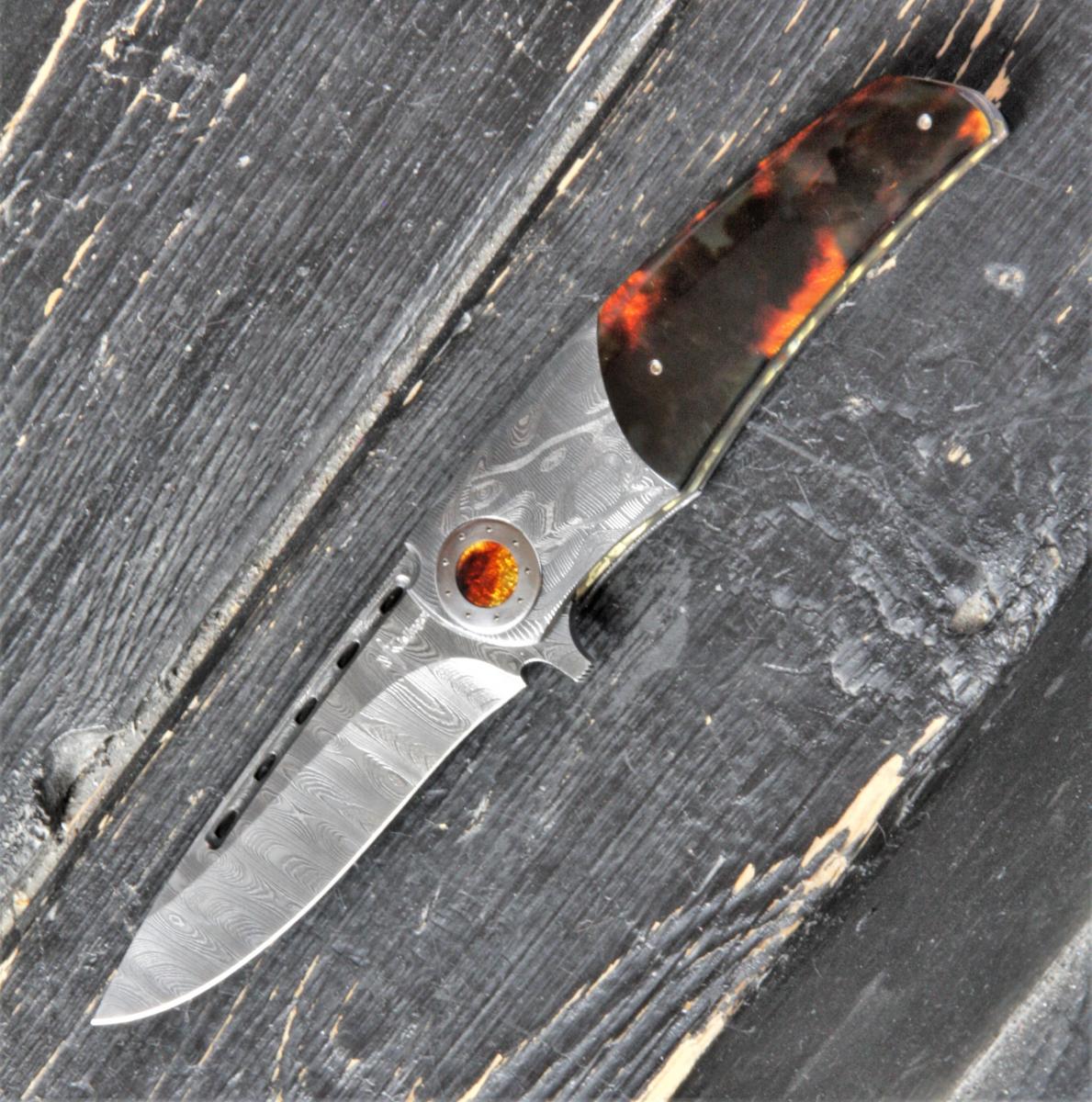 Czech knife maker Miloš Kislinger was awarded for this liner lock folding
knife ‘Wave’, with a Damascus steel blade, and a handle combining
Damascus bolsters with artificial tortoise.
Last but not least, the ‘Night of an Owl’ scored for the second time. This was the first time that one and the same knife scored in both contests. Both juries especially appreciated the excellent quality of the realistic motive of the engraving.
If I am to assess Příbram Knives 2018 as a whole – there is increasing number of Czech knife makers who can make an excellent Damascus blade. I should also confirm and assert that the craftsmanship of the Czech knife makers is excellent. Even more important – not only the “old dogs” are excellent masters of their trade; there is a new generation of high promise young knife makers that is struggling for their place under the sun.
I already mentioned new exhibitors offering materials and machines for knife making. There were, for instance, four manufacturers of belt grinders. Even the program in the back yard grew a little in size and volume. More blacksmiths were showing their skills there, one of them even used a historical, hand blown furnace.
Overall, Příbram 2018 has shown convincingly that knife making in the Czech Republic is doing well, if not blossoming. It can offer both “ultimate”, top notch knives as well as a knife for everyone and both kinds of knives were presented. As a message about craftsmanship in the heart of Europe, it said loud and clear: “Come, we have plenty!” The following pages show a small selection. 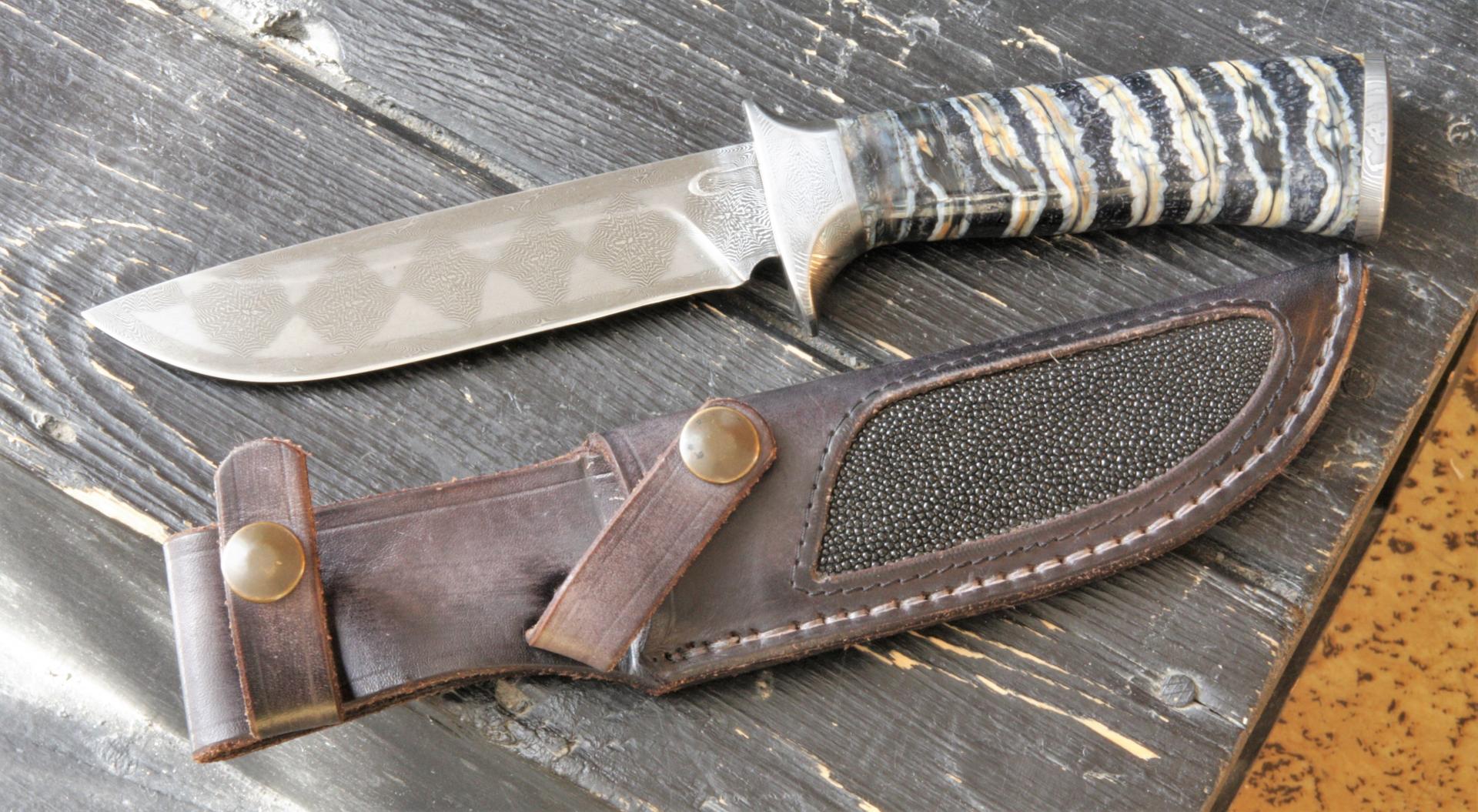 Jiří Čurda was awarded for this fixed blade knife, with a blade made from mosaic Damascus steel and
handle made from mammoth tooth. The knife measures 260 mm. 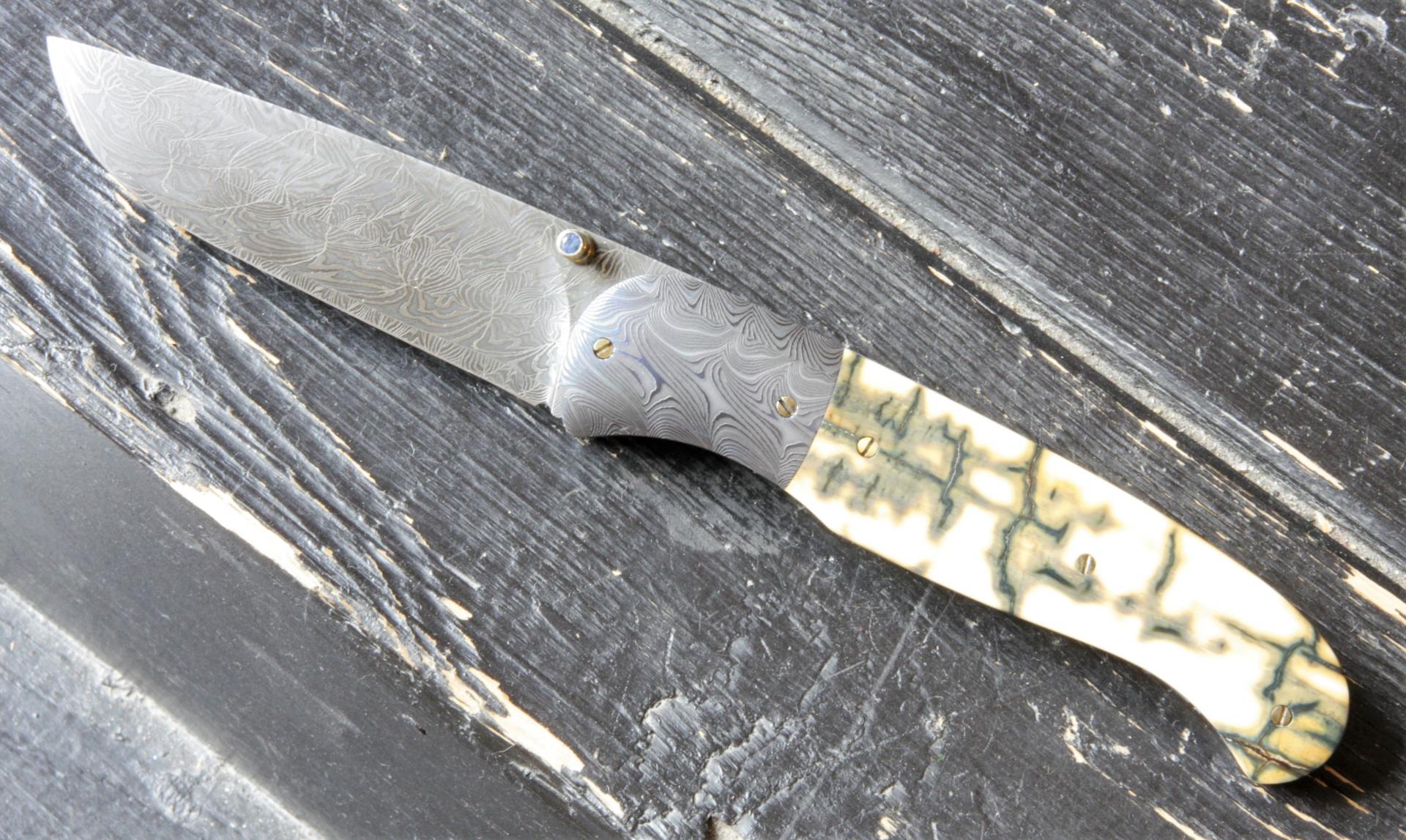 The Myslivost award for the folding knife was won by Michal ‘Yakuza’ Jarý. The knife has a carbon
Damascus steel blade, titanium Mokuti bolsters and mammoth grip scales. A sapphire eye is inserted
in the opening pin. The overall length is 216 mm. 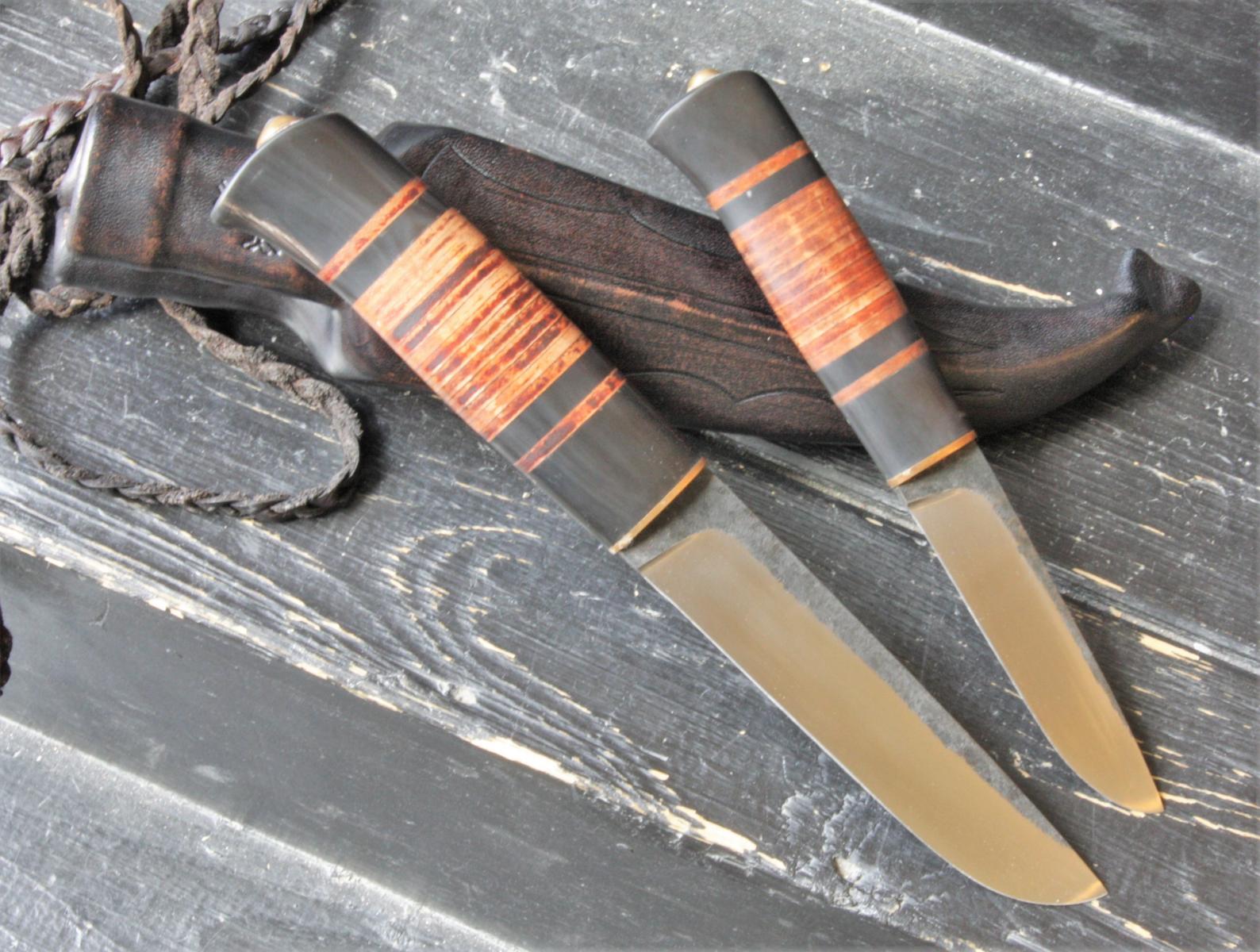 A set of two hunting knives by Czech maker Arkadij Davbakyan. The blades are 2028 Swedish, and the
handles are buffalo horn and leather. The overall lengths are 275 and 218 mm. 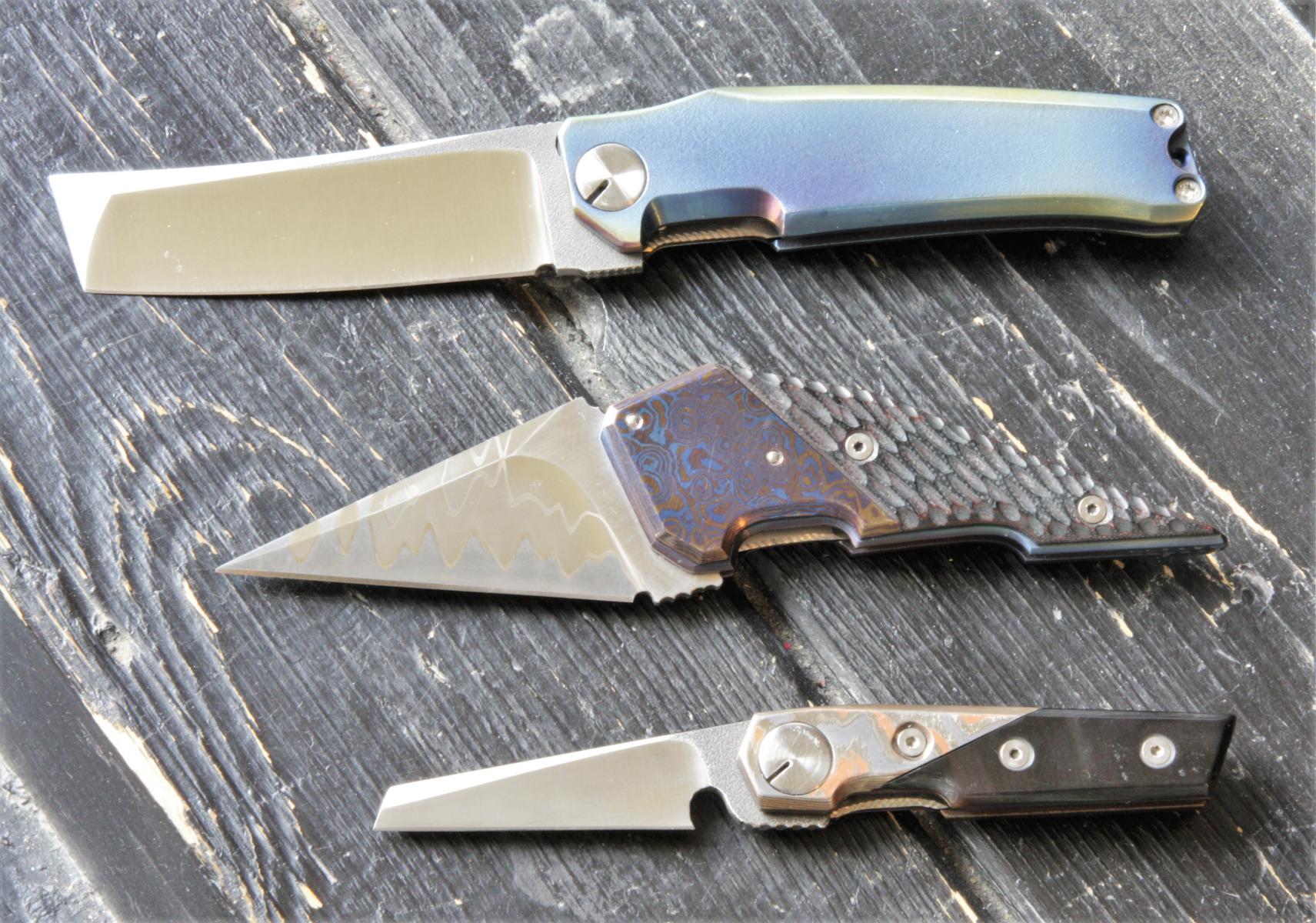 Ukraine knife maker Sergii Latyshevskyi made these Chisel, Crab and Flea (from top to bottom). The Chisel
has an N690 blade and titanium handle, and measures 200 mm. The Crab has a 1.6110 and 420 blade and
Mokume/G10 scales and measures 168 mm. The flea has a blade made of N690 and Mokume/G10 handles,
and measures 178 mm.

The ‘Scandic’ by Russian knife maker Denis Uldanov. The blade is Zladinox stainless steel Damascus,
the handle and sheath are cocobolo and bone. The knife measures 235 mm.

Two knives by Czech maker František Kundera. The top knife has a 14260 blade and ash handle, the lower
one has a 98 mm blade of 14260 and an oak handle. 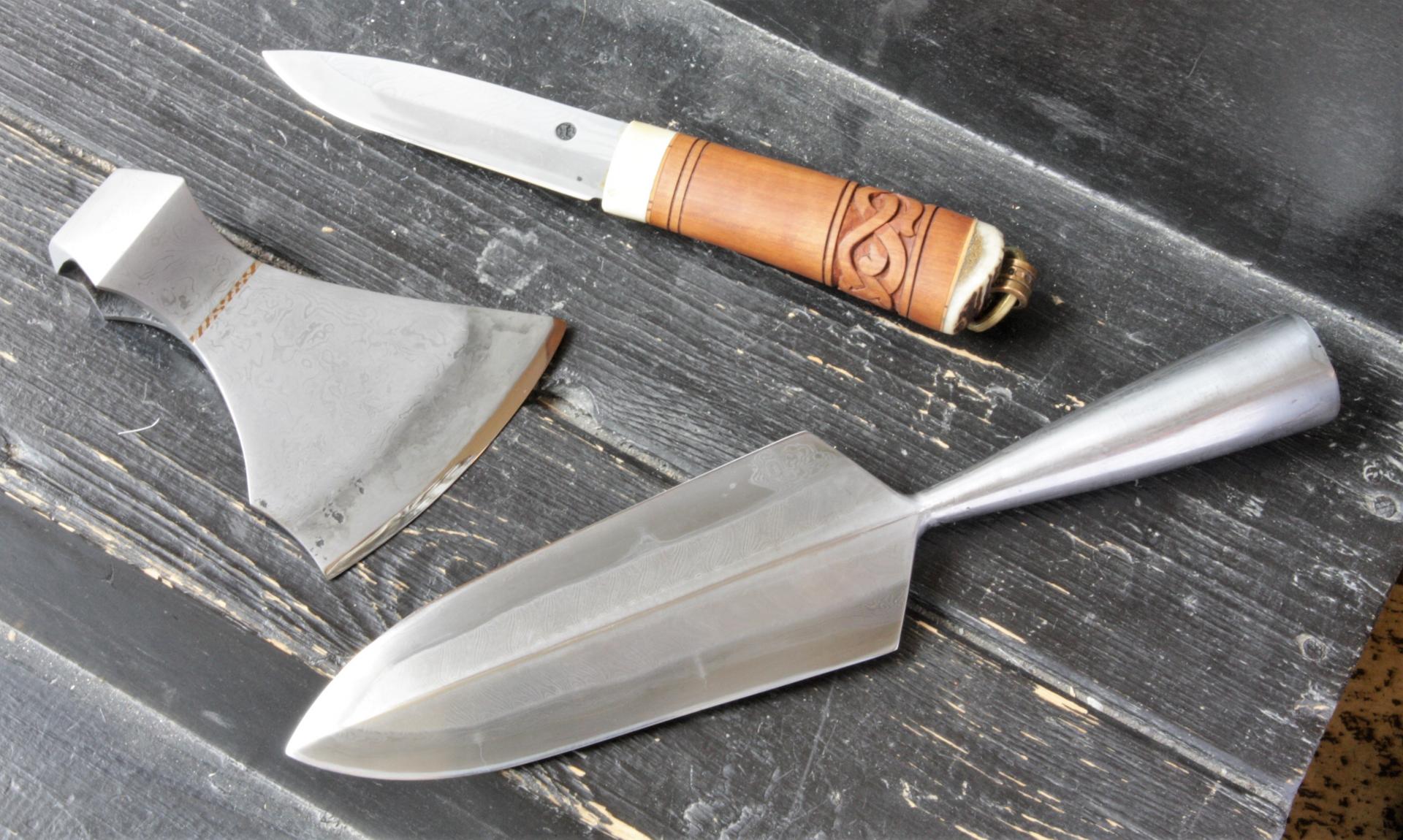 Hardware in an early medieval style, inspired by archeological finding, by Slovakian maker Ladislav Ulík.
The steel is 19191 carbon steel Damascus, with a silver and copper intarsia on the axe. The knife handle
is pear, reindeer bone and antler. 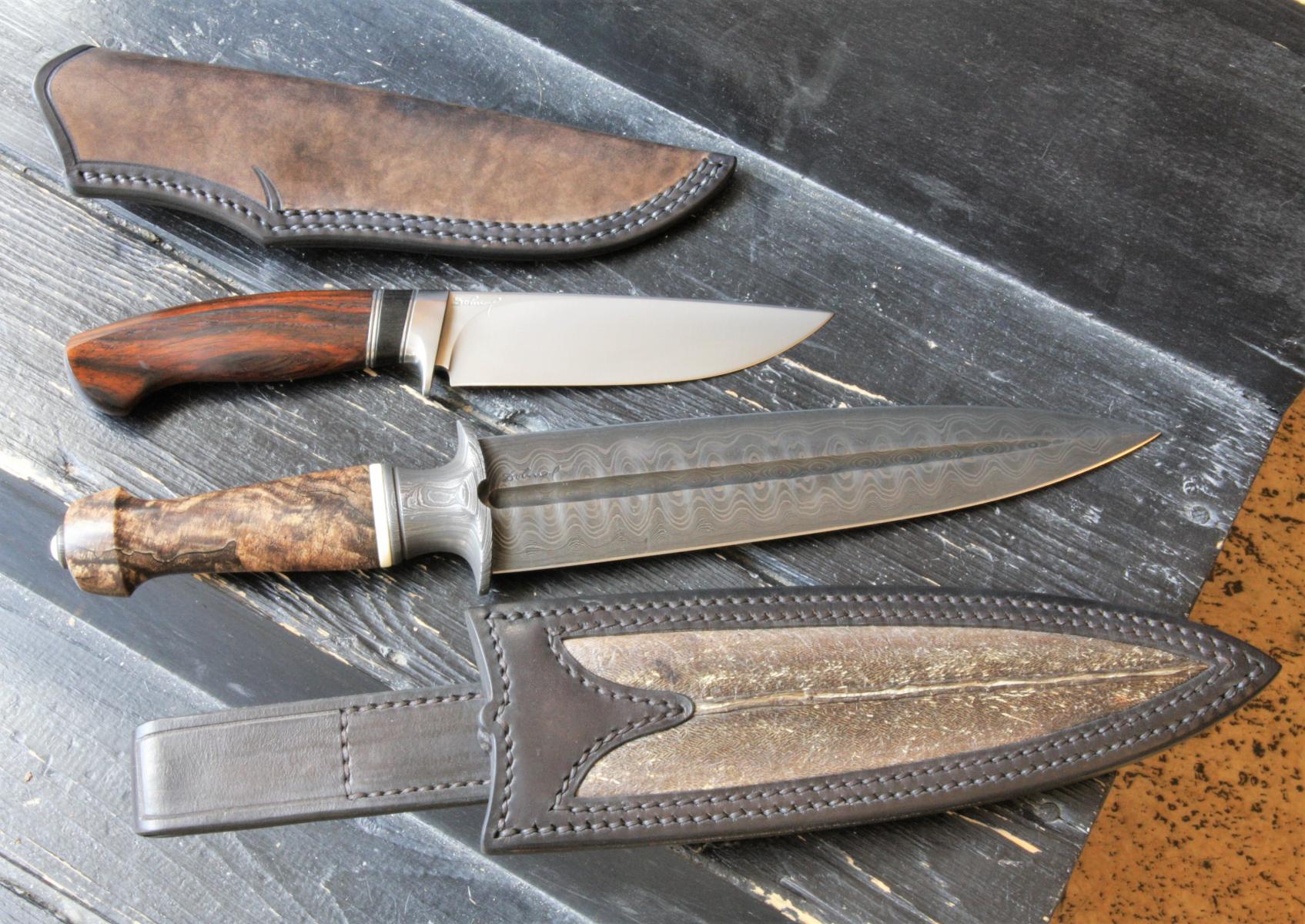 Two knives by Petr Dohnal. The blades are Elmax and carbon steel Damascus, the handles are cocobolo
and ebony for the upper knife, and palisander for the lower one. The overall lengths are 275 and 385 mm
respectively. 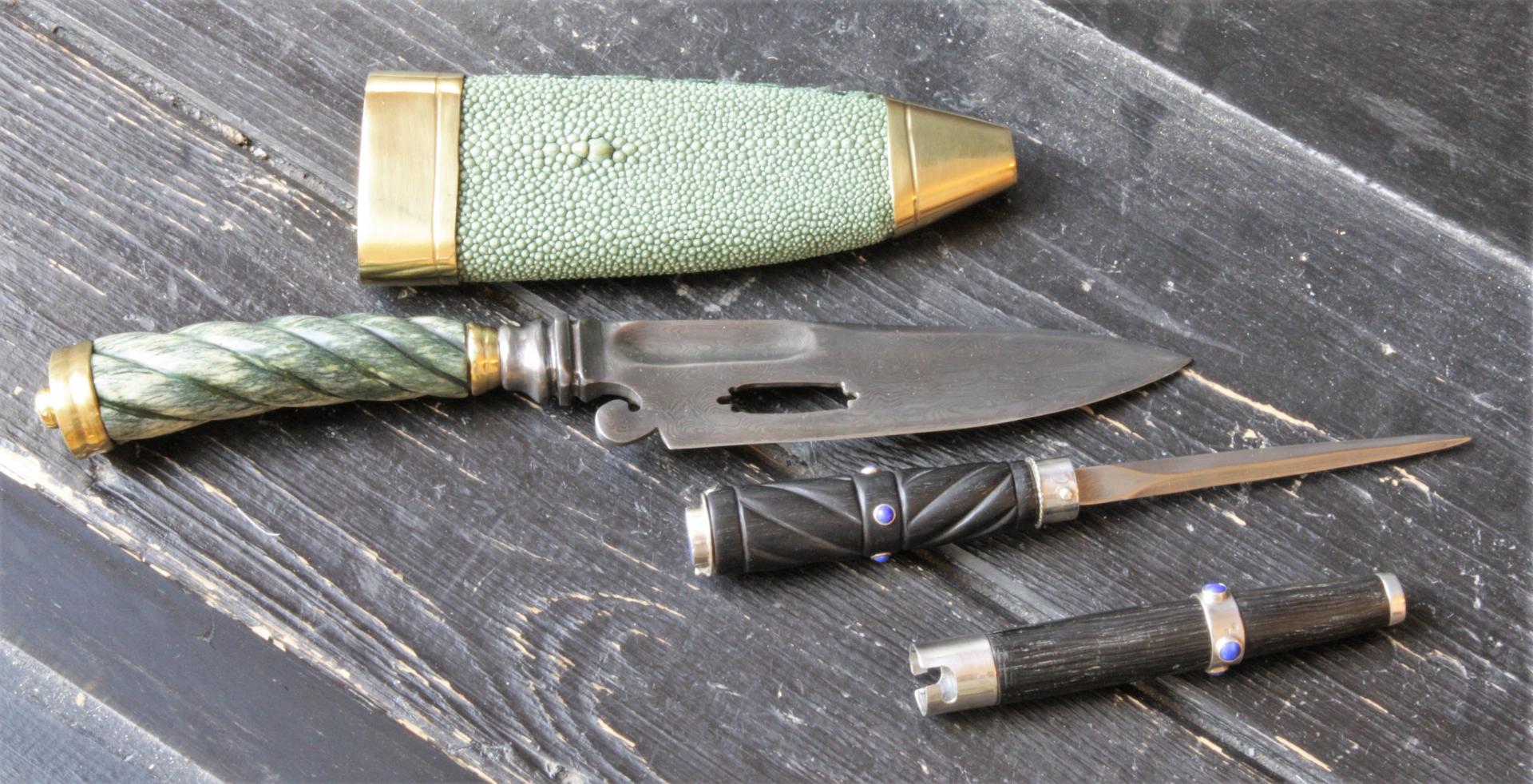 Zdeněk Krezja made these Barokní lovec (Baroque hunter) and Poslední přitel (Last friend). Both have
carbon steel Damascus blades. The hunter has an antelope bone handle and an overall length of 270 mm.
The Last friend has a handle made of ebony, silver and lapis lazuli and measures 140 mm. 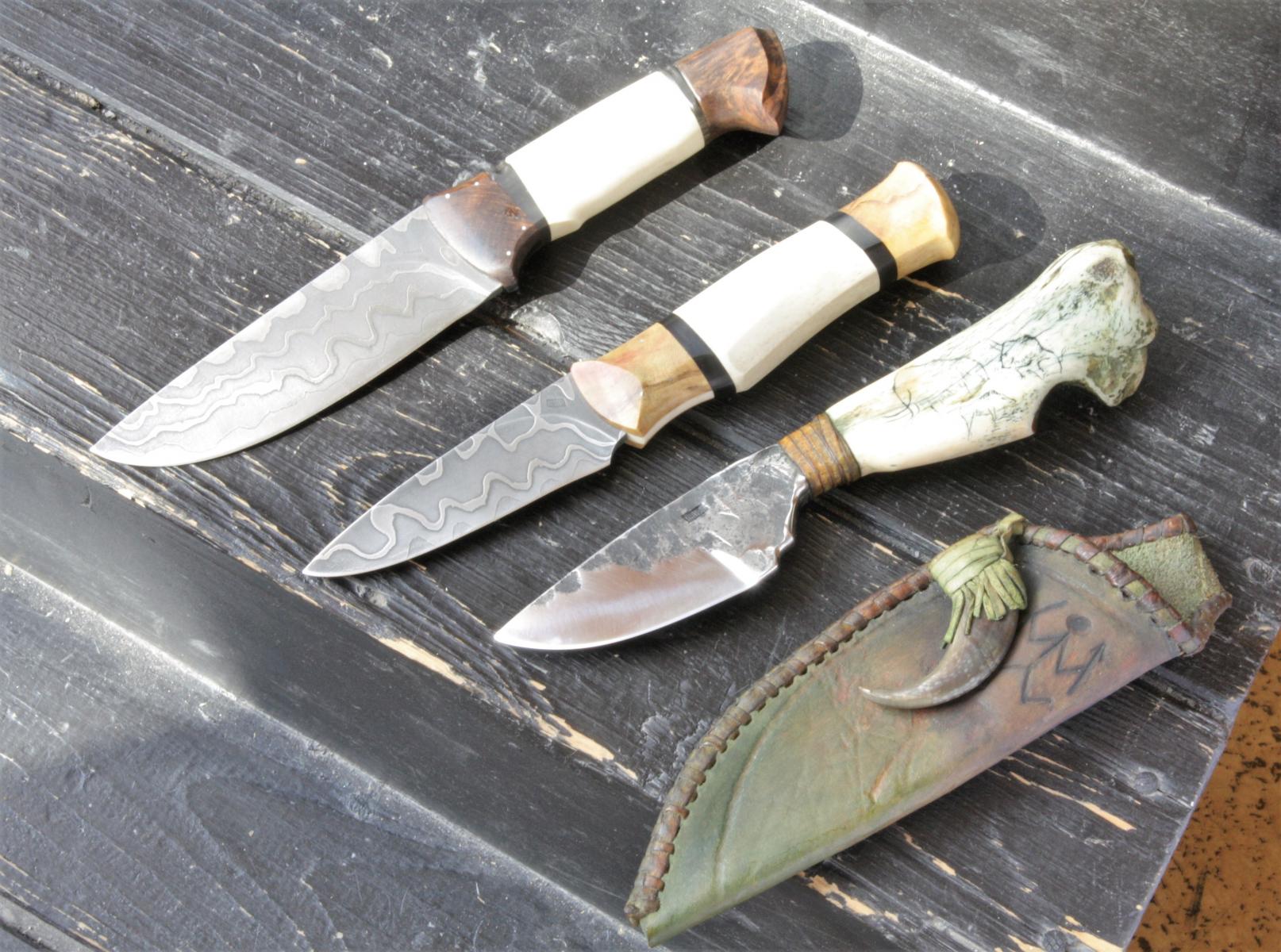 Slovakian knife maker Vladimír Puliš presented these three hunting knives. The blades are RWL and
stainless steel Damascus, the handles are (from left to right) walnut and ostrich bone, maple and ostrich
bone, and bear bone. 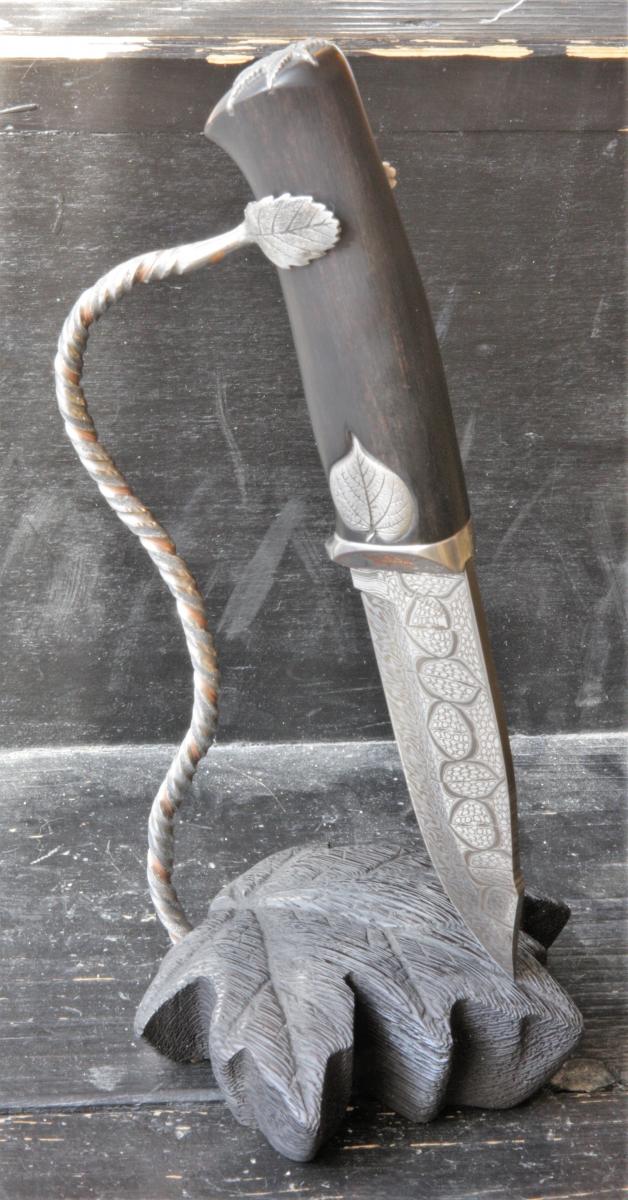 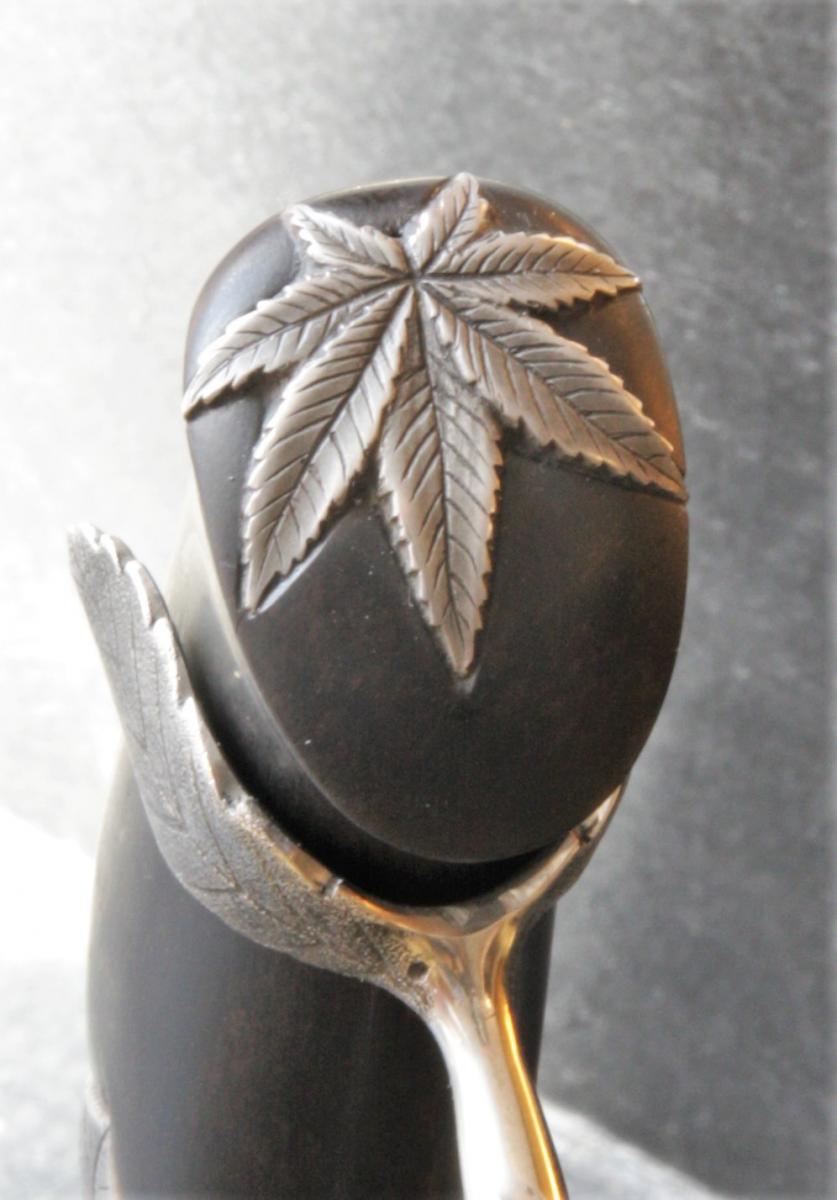 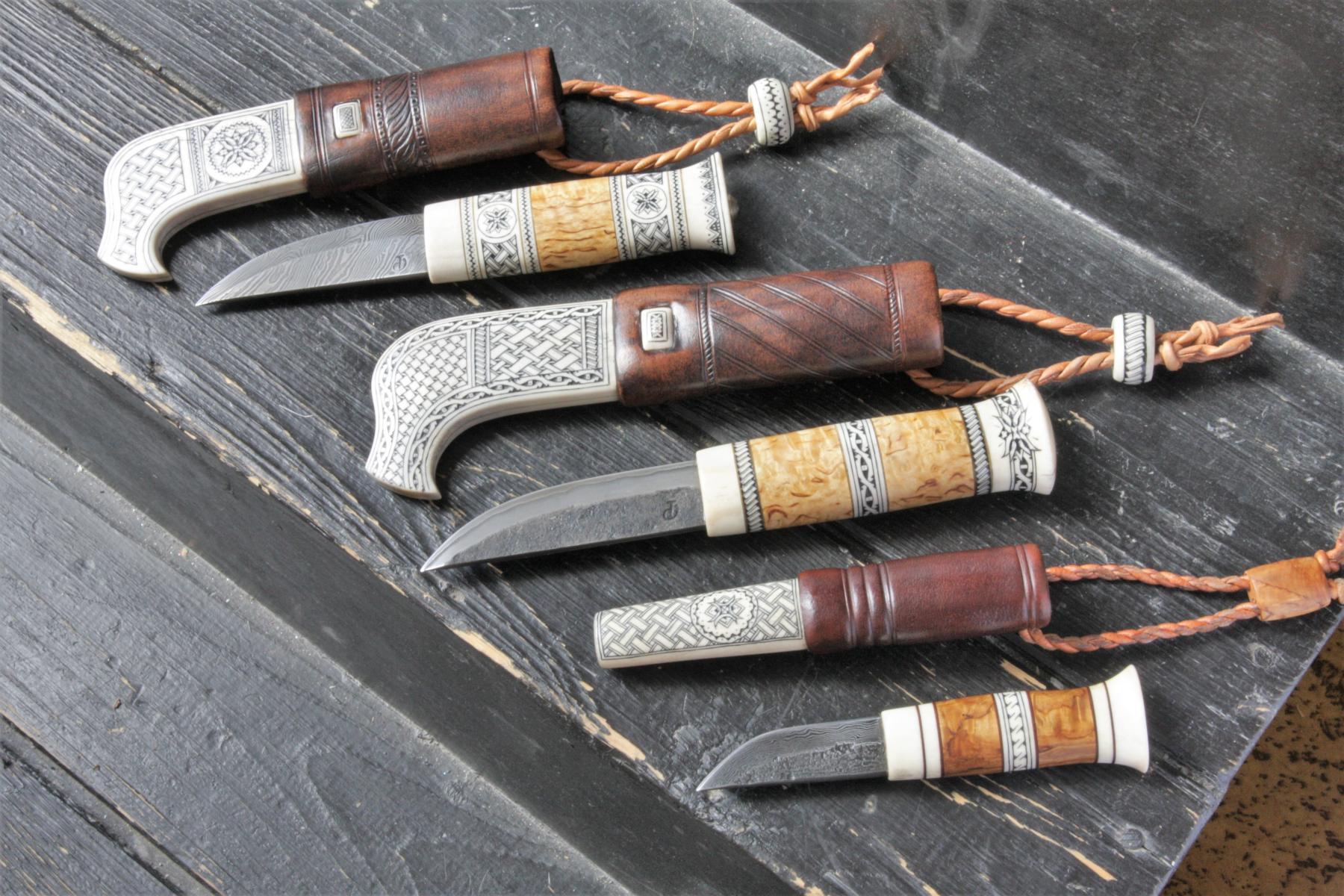