Rafal Brzeski (41) from Legnica, in the south-east of Poland, started making knives in 2013. Three years ago he decided to become a full-time knife maker under the name ‘Brr … Knives’. In that little space of time, Brzeski has gained himself quite a reputation.

Knife making is a serious endeavour. But that doesn’t mean there’s no room for a smile. Like the smile found on the bright green, one-eyed octopus that the Polish knife maker, Rafal Brzeski has on his table at knife shows. It looks like a cartoon character, and it’s also his logo.
It combines well with Brzeski’s ‘nom de plume’: Brr… Knives, which can be interpreted in many different ways. However, the real explanation is simple: the ‘B’ and the first ‘r’ stand for his initials, the second ‘r’ is from the Polish word robił, which means 'made by'. So it is Brzeski Rafał robił  = Made by Rafal Brzeski. The resulting name is short, striking and easy to remember. 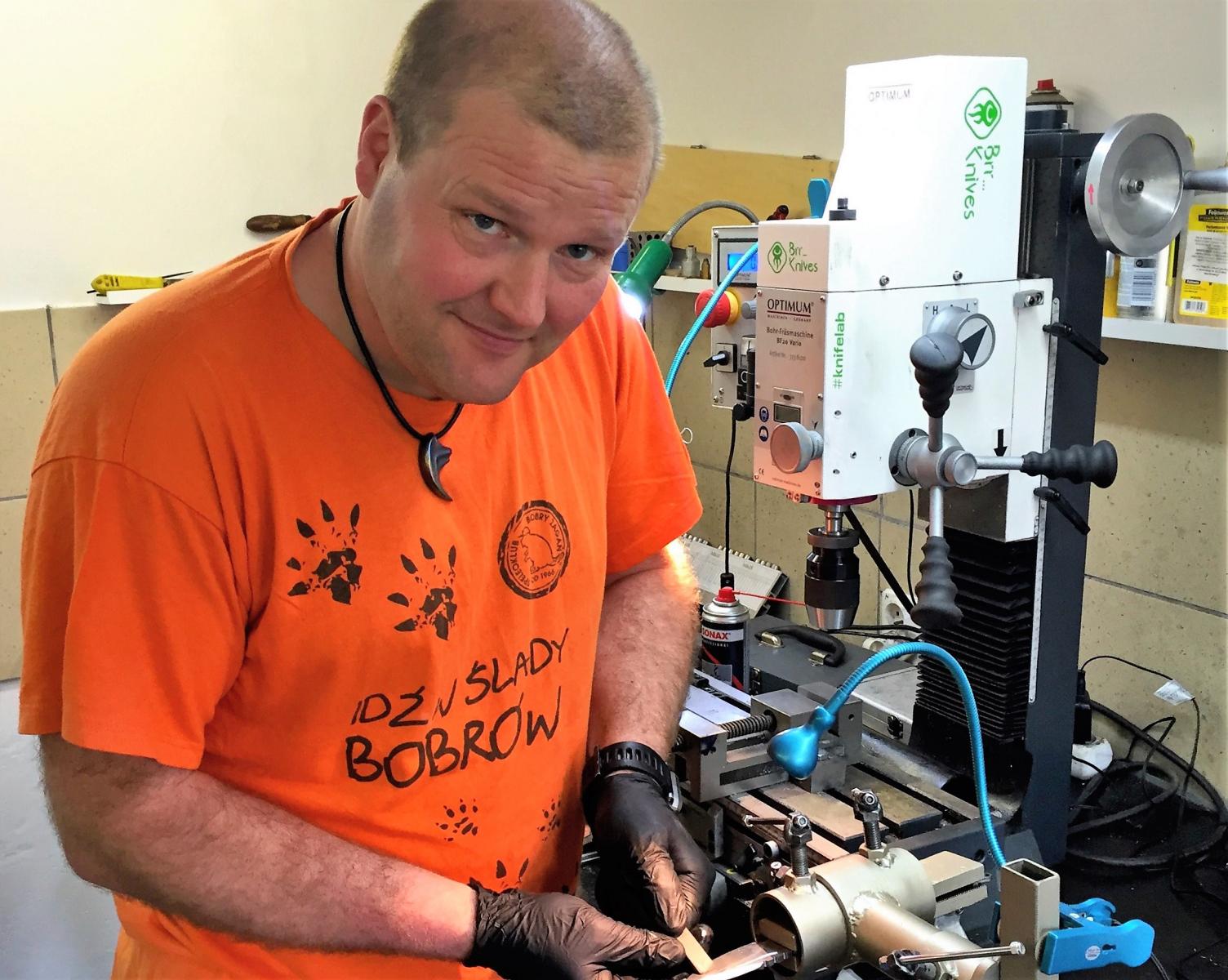 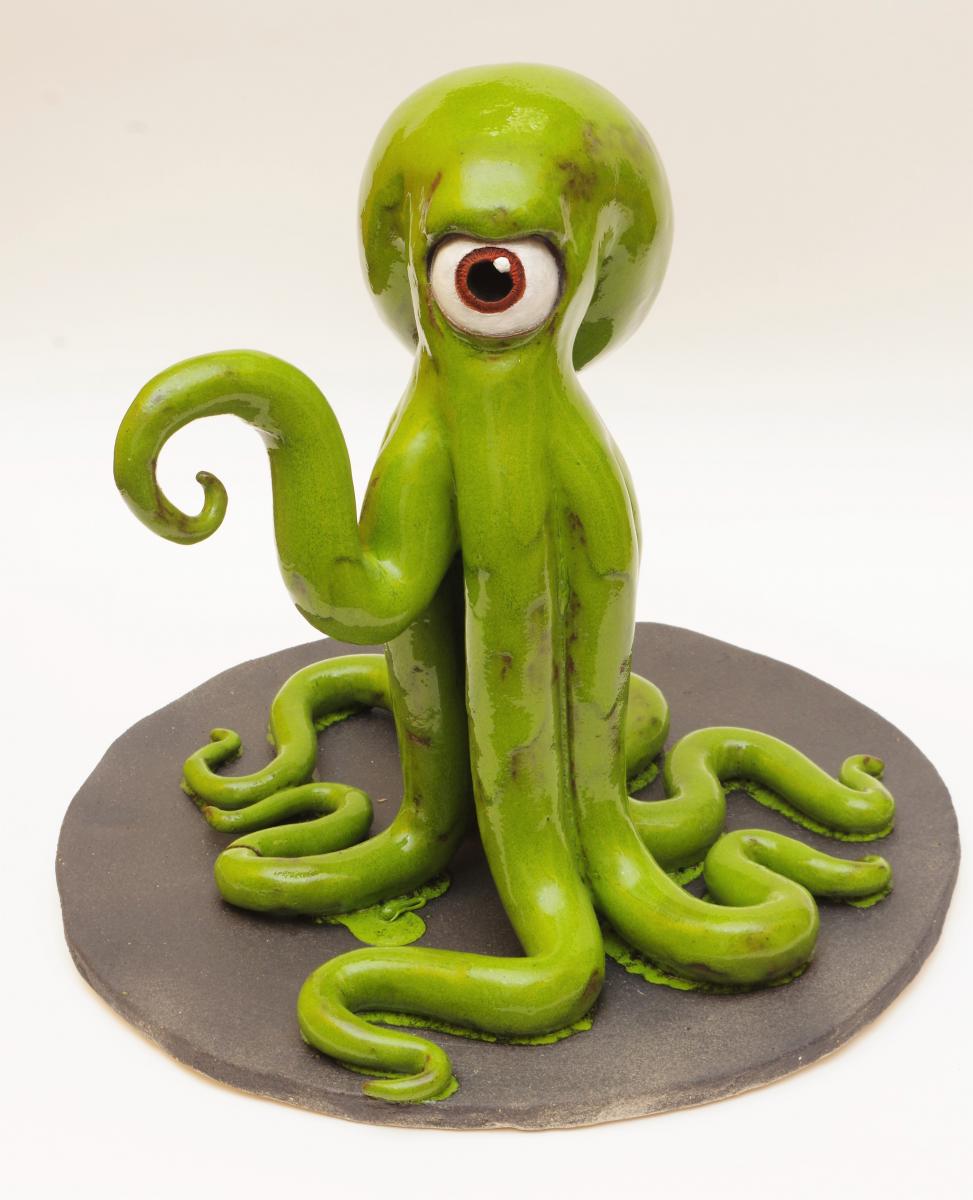 Left: Rafal Brzeski in his workshop. Right: The octopus mascot accompanies Brzeski to all his knife shows.
Rafal Brzeski started his professional life at the Wroclaw University of Technology, where he specialised in measuring instruments and systems. He spent many years working in the security industry as a designer, appraiser and forensic expert. Outside of work and on his own time, he crafted and created things, ranging from gadgets to jewellery. And finally, knives.
Knives
From a young age Brzeski liked knives, he used to carry them as a boy. Yet, it still took a long time before it occurred to him that he could make one himself. When the thought did occur, it was basically out of frustration. At the time, custom folders were expensive and difficult to get in Poland, so Brzeski tried to make one himself. There was a very practical reason as well: “My hobby is speleology. For that, I travel a lot, to Mexico, Papua New Guinea. These areas have a lot of jungle. Over there, a knife is your life.” 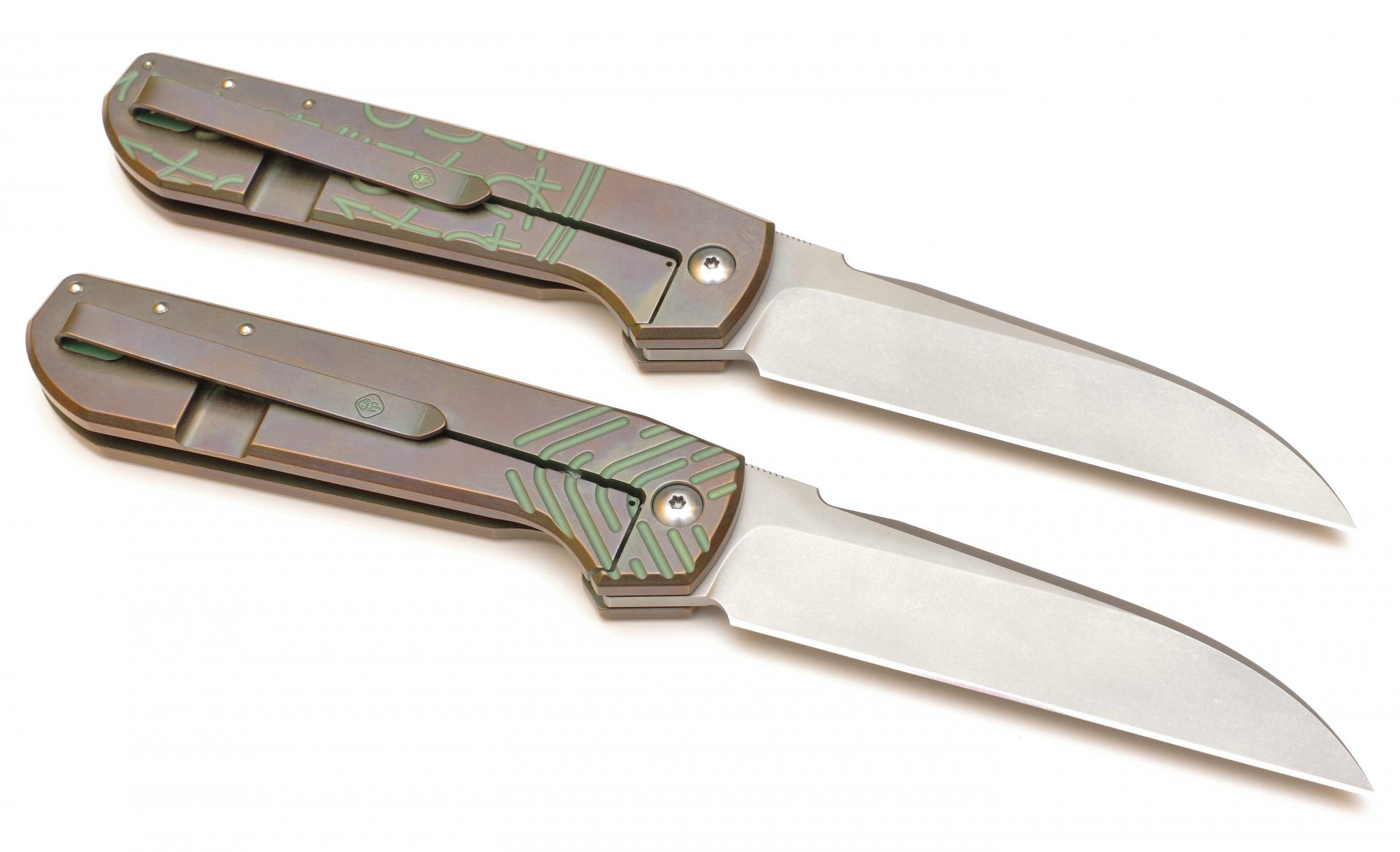 Two versions of the ‘006 Wasabi’, with different patterns milled into the handles.

The same knives, folded, and pictured from the opposite side.
Brzeski showed his first knives on the Polish knife forum, and to his surprise there were people who wanted to buy them. That was a sign to take things more seriously. Rafal got himself a copy of Bob Terzuola’s book, The Tactical Folding Knife, the Bible for folding knives. His original specimen has been read to pieces, but he has kept a pristine copy, which he hopes to get signed by Bob Terzuola at the 2018 Blade Show – because as Brzeski simply states: “He is my Master”.
You might say “The rest is history”, but his story has only just begun. Things are moving fast for Brzeski. He just signed a contract with the Chinese WE Knife Co. for a production version of one of his models, which is expected around May 2018. Last year, a small group of Polish knife makers visited Blade Show and provided Brzeski with some very good contacts as well. Rafal Brzeski is currently working on a new model, which he will introduce at Blade Show, 2018.

The model ‘006 Wasabi’, here with a blue anodised titanium handle.

Folding knives
Brzeski only makes folding knives, because he finds these more interesting than others. “A fixed knife is just a folding knife with a broken pivot”, he laughs. At present, Rafal has three models: the 006 Wasabi, the 007 Buwaya (in collaboration with Polish designer Grzegorz Grabarski – KOMBOU Design), and his latest project, the Brr009. All three are frame-lock folding knives with massive titanium handles, anodised in different colours. The pictures will give an idea of these designs and the workmanship. 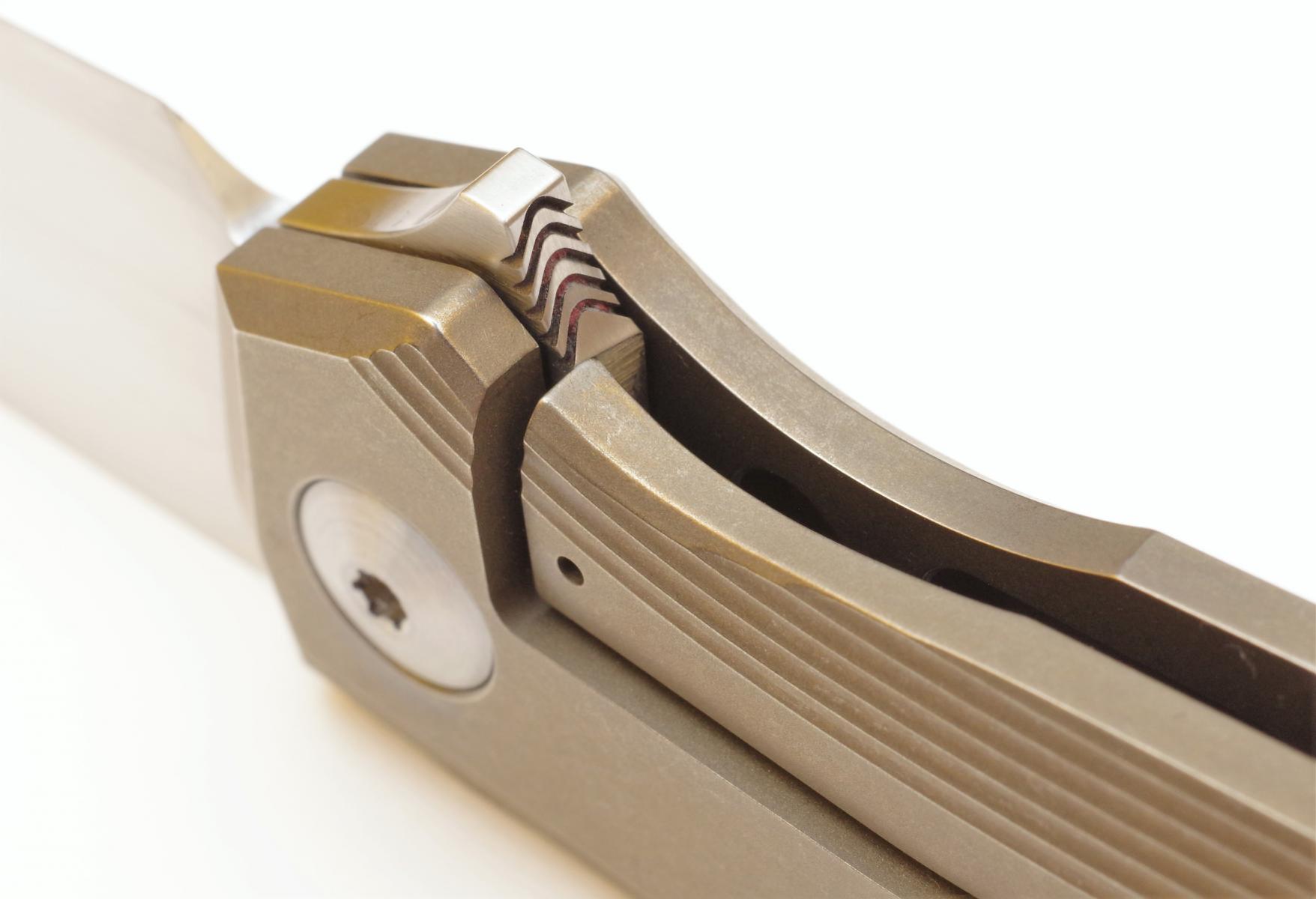 Left: Conspicuous jimping on the spine of the Brr009 blade. Right: Close-up from the frame lock and the jimping on the blade of the '006 Wasabi'. Brzeski's fit and finish are great.
Brr … Knives has a limited production ouput. Rafal makes around four to five knives per month, mainly due to the amount of handiwork. He uses a CNC machine to mill his, sometimes, intricate handle patterns, but that is just 10 percent of the total work. The rest is done by hand. His favourite handle material has always been titanium. His steels are M390 and Elmax.
So, what are his plans for the future? “To make knives!”, Brzeski laughs. “I am still looking for better materials. I would like to make special custom knives. There is still many things to improve.” 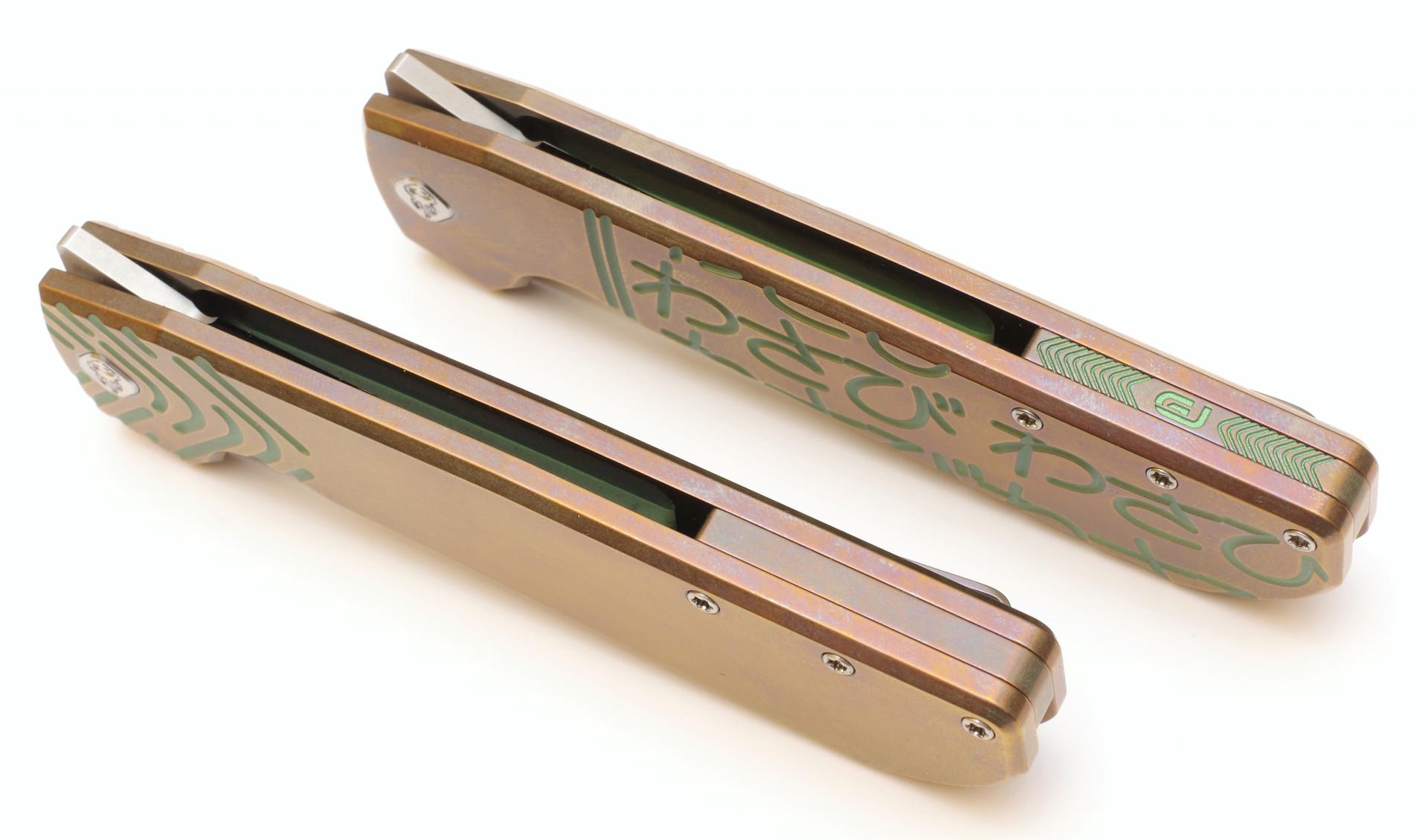 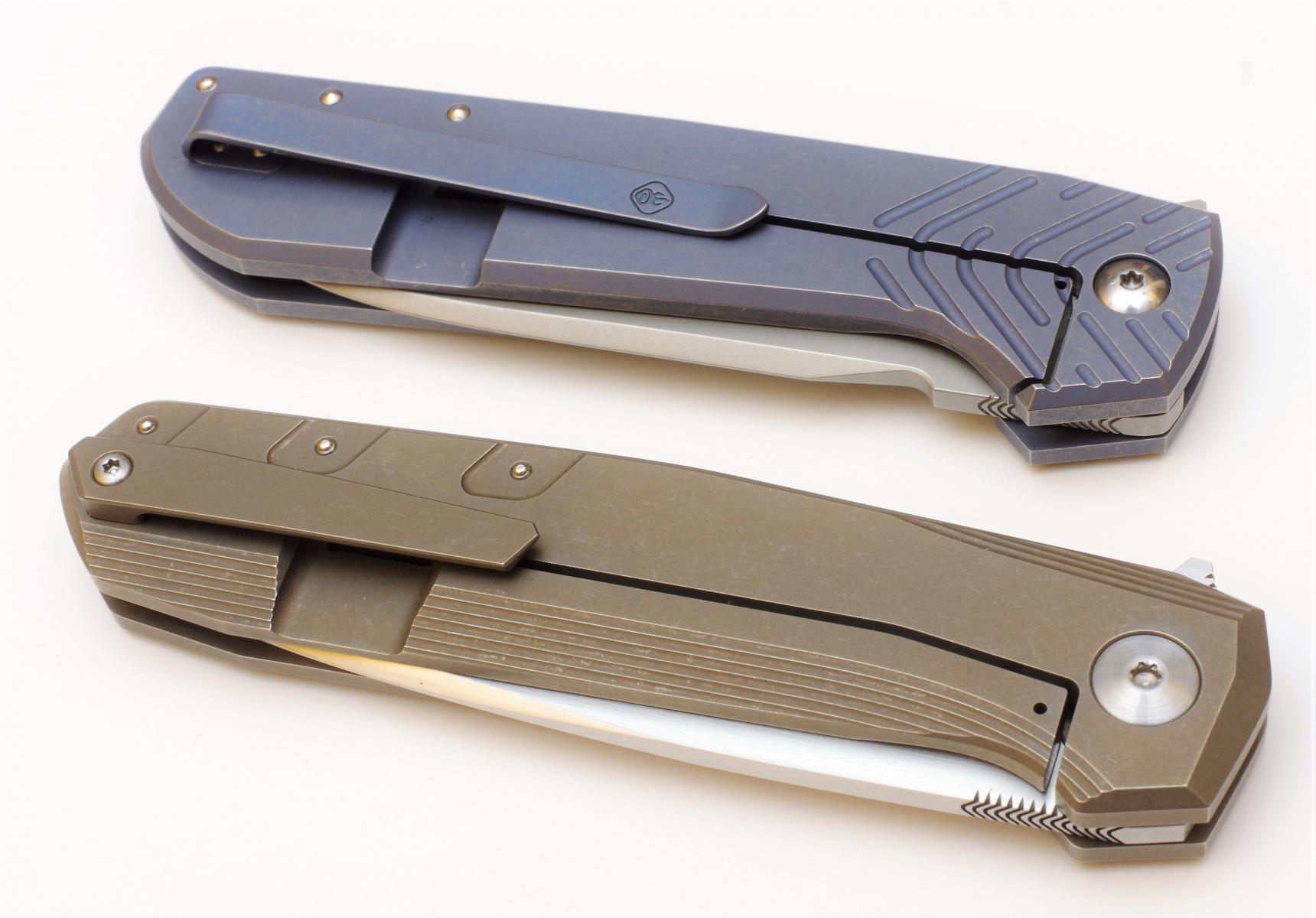 Left: Both Wasabi’s seen from the spine side. Right: A comparison of the ‘006 Wasabi’ (top) and the ‘Brr009’ (bottom).
Our sponsors
Advertisements
Dit is een geprinte versie van de publicatie op