Italian knife maker Oliver Goldschmidt (26) spent almost ten years building his workshop and honing his skills before he decided to unveil his knives to the public. It was a very pleasant surprise when he finally did.

An Italian knife maker with the name Goldschmidt? For some that may raise some questions. The answer is simple: Oliver comes from an international family with German ancestry. His mother is from New Zealand, his father spent his childhood in the Netherlands, and Oliver was born and raised in Italy, near Florence, where he still works and lives.
When he was 14 years old, Oliver Goldschmidt shared the interests of any other child of his age. Stimulated by popular fantasy novels, he fantasized about dragons and swords. But unlike most of his contemporaries, Oliver did not merely play with ‘swords’. He wanted to make them. More than that: he wanted real fire and real steel, and he was quite persistent about it. A neighbouring blacksmith showed him some tricks and it was not long before Oliver was building his own forge. 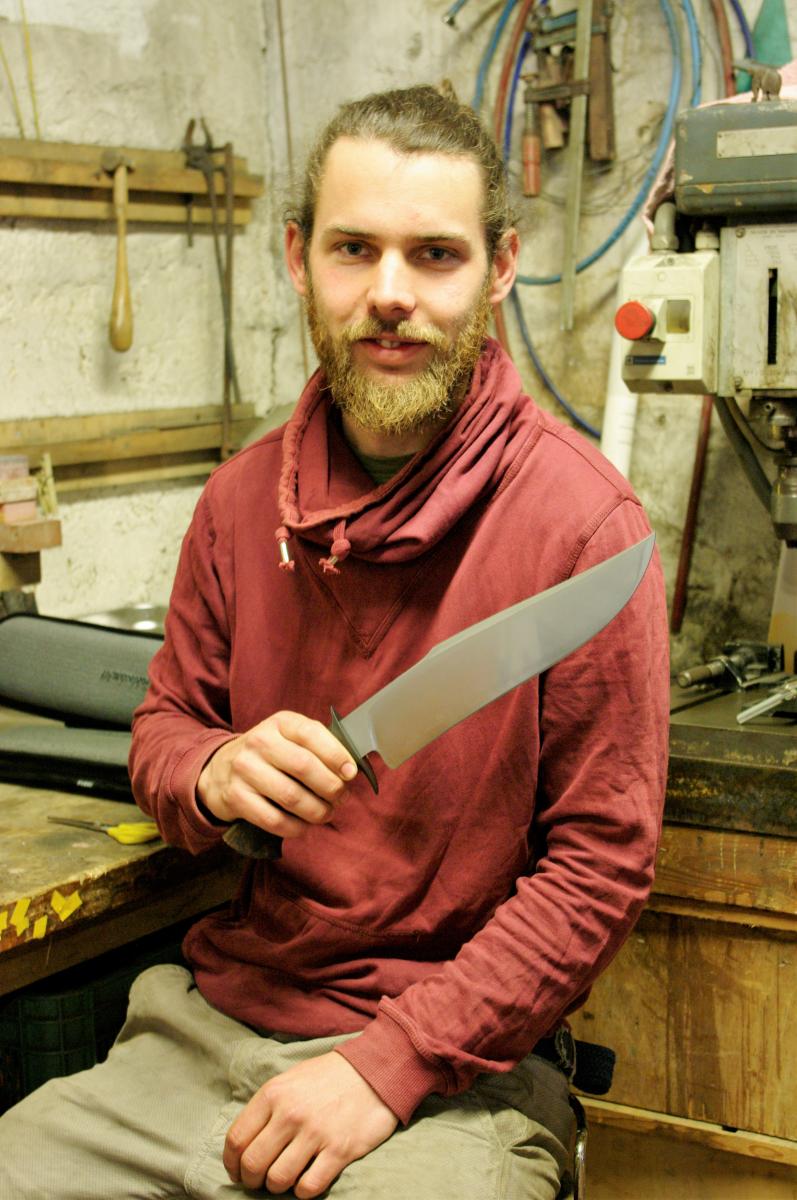 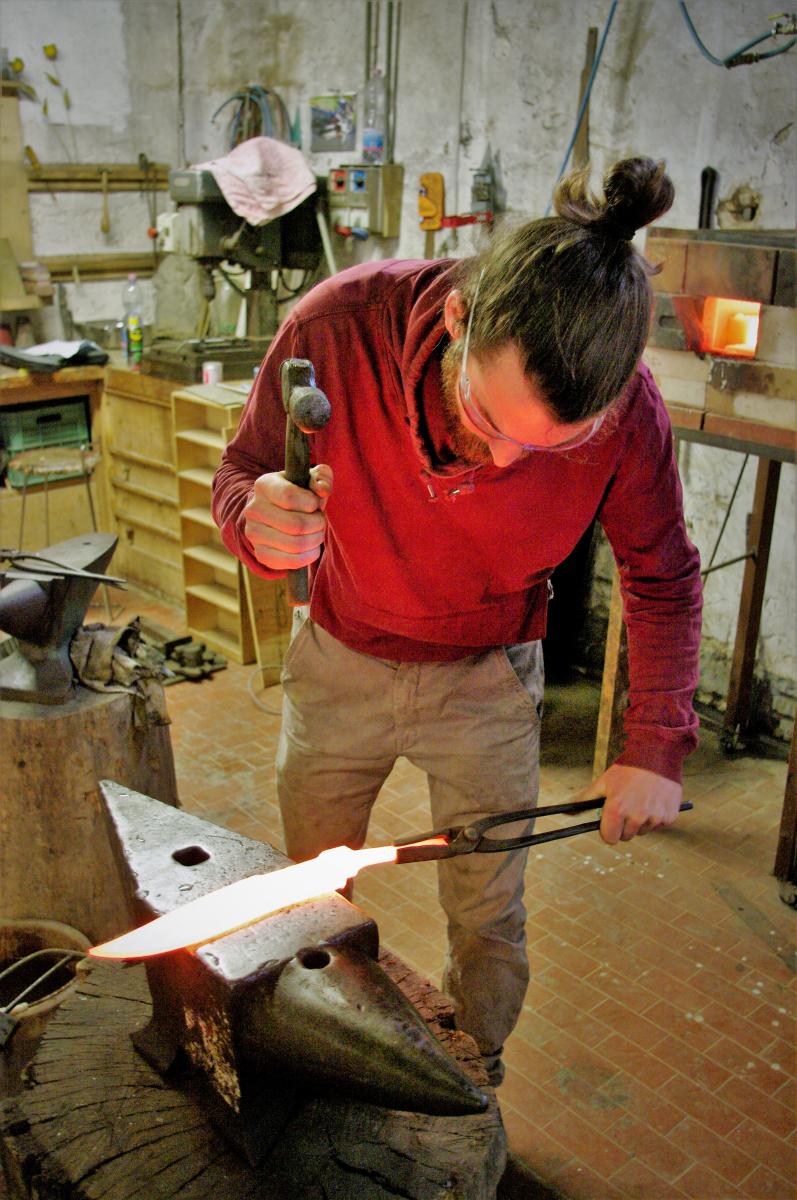 Italian knife maker Oliver Goldschmidt in his workshop.
At that point, his father gave him some sound advice: before trying to make big blades, he should start with smaller ones. That is how Oliver discovered the world of knives, which fascinated him ever since. “Knives are objects in which I can express my artistry, but they are also a tool”, he says. “They are a combination of functionality and aesthetics with endless possibilities.”
For almost ten years, Oliver worked on building his workshop, and mastering the different aspects of forging and knife making. He taught himself to make Damascus steel, he perfected his fits and finishings, all the while not being quite sure whether he was doing well. Finally he mustered up the courage to show his knives to the public. It was not half as bad as he had feared. 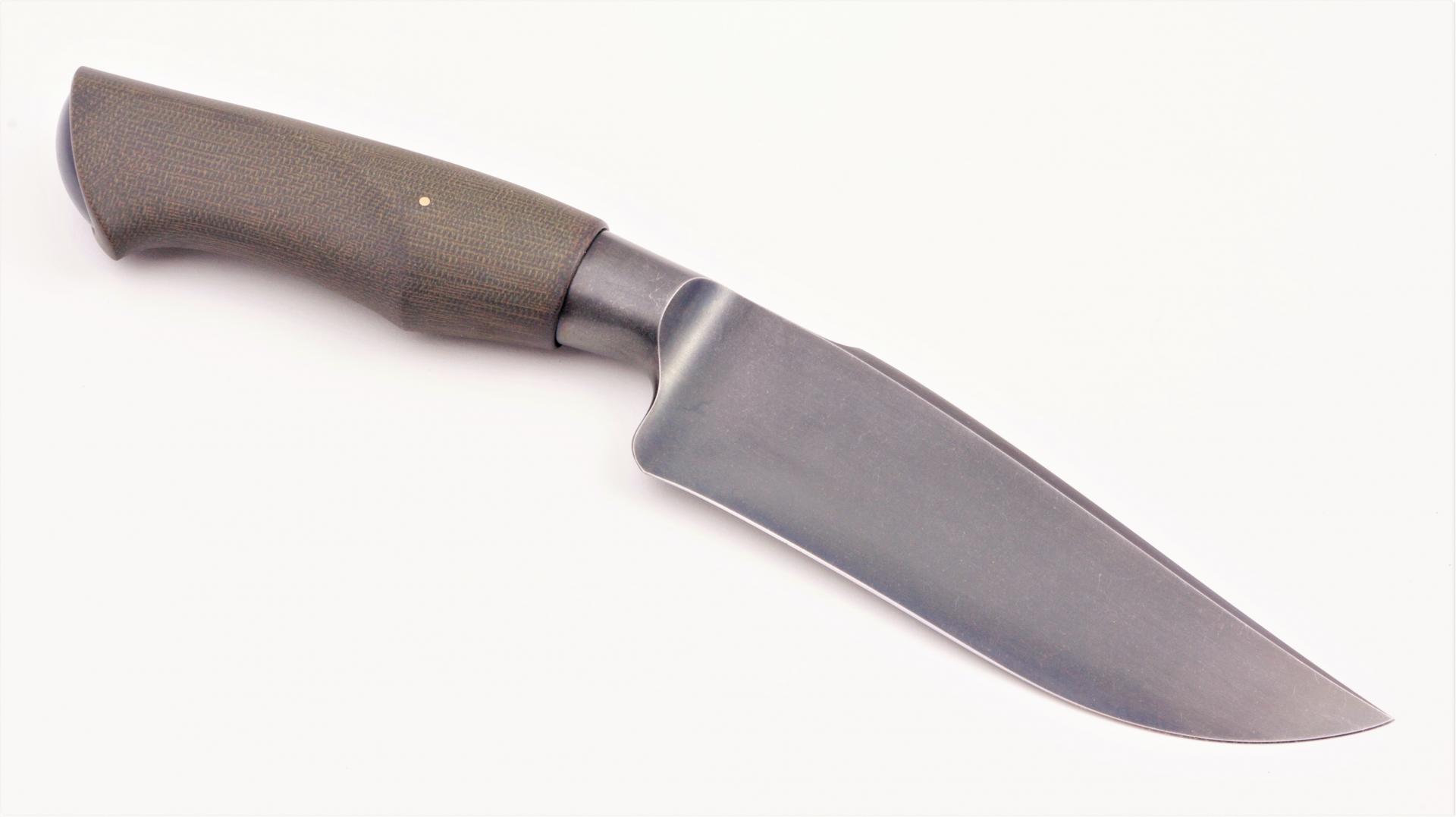 Two of Oliver’s semi-integrals. Both are made from O2 steel. One has a black Micarta handle, the other
handle is green Loveless Micarta. The knife with the black handle has a hot bluing finish, the knife with
the green Micarta handle has a cold bluing finish.
At his first knife show, in Livorno, Oliver got very good feedback and sold most of his knives, which secured him a place among the Italian knife makers. His first show outside of Italy was Gembloux, Belgium, in 2018. To his amazement and delight, he won the prize for the best fixed blade. One of his knives landed on the cover of European Blades Mag. His next step is his own table at the Blade Show, in June this year - a dream come true. Another dream is still waiting to come true though; to become a master blade smith of the Corporazione Italiano Coltellinai, so he can be present at the Milan knife show.
Here is a young man who loves his work, who magically combines big blades with Italian elegance in a distinct style and who, when asked about his ambitions, only says: “I just want to be a very good knife maker”. Well carry on, you are doing fine. 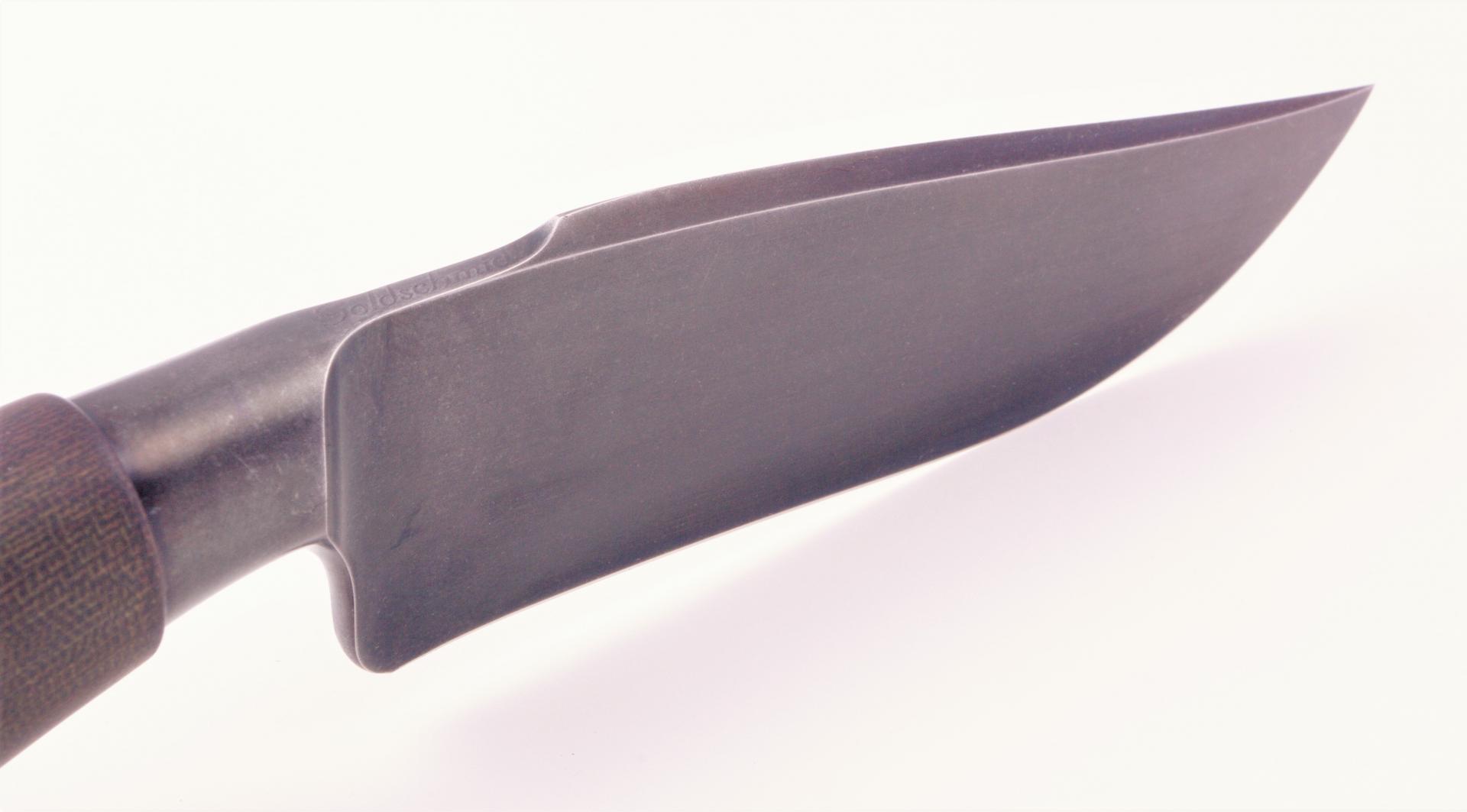 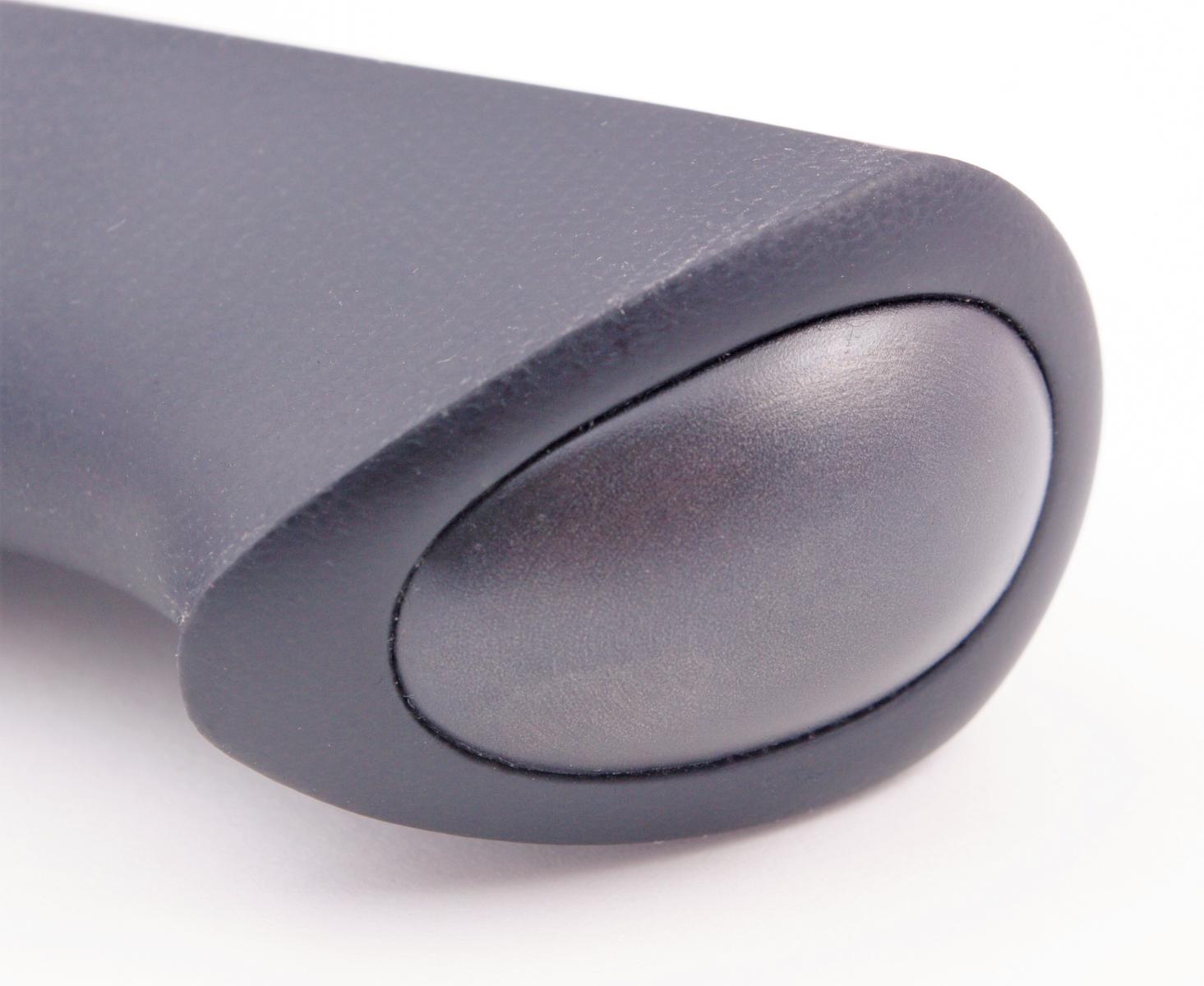 Oliver Goldschmidt spends a lot of time on the finish of his knives, with a seemingly simple and elegant result.

Production
Oliver would love to attend more shows, but there is a problem. At the moment, he does not make enough knives. With his strive for perfection, every knife takes up a lot of time: forty to sixty hours, depending on size and complexity. He simply does not produce enough knives for more than two or three shows a year, but he is working hard to increase his production.
And then there is the financial aspect. The price that Oliver can ask for his knives, has little relation to the costs – something most knife makers know all too well. Oliver explains: “First you have your materials. G10, wood, maybe ivory for the handle. You need steel, gas for the oven. Those are direct costs. But the real expense are all these hours. If I would calculate them at a normal rate, the price of my knives would be double what I’m asking. So for now, it’s just an investment.”
Fortunately, Oliver has a second career. His family has a ballooning business, and Oliver is a certified hot air balloon pilot. When in season, he makes almost daily flights over the Tuscan landscape – one can imagine worse jobs.

Different stages of making a knife, from a steel bar at the far right, to a finished knife. They serve as a
demonstration. The bar and the finished knife are monosteel, the stages in between show Damascus.

Designs
Oliver Goldschmidt does not usually make drawings of his knives. “I normally get my ideas at night. When I start forging, I have the complete knife fixed in my mind’s eye. And sometimes when I am not sure, the process of forging shows me the way. There are so many moments where you can choose.”
Oliver forges his own Damascus, for which he normally uses a combination of 15N20 and K720 (O2) steels. His monosteel knives are made from O2, or 125SC. His use of monosteel is mainly due to requests from customers. Although his knives are fully qualified for practical use, people are still afraid to damage the Damascus – and therefore request monosteel. The big question remains which finish to give them. Oliver is still experimenting, but for the moment has found a satisfactory solution using gun bluing chemicals. Hot bluing gives a shinier result, cold bluing gives a duller finish.
One of the trademarks of Oliver’s knives is the striking butt cap. It appears to be the end of the tang, sunk into the handle which has somehow grown over it. Some people have even asked Oliver how he managed to shrink the handle around it. In reality, the butt cap is a separate piece, fixed by a hidden pin. It’s not an easy construction, Oliver admits, but as he explains: “I like the process of making the knives, so I put a lot of energy into the details of the handle, which may not always be strictly necessary. But it is nice to find something you like, and then follow through with it until you have mastered it.” 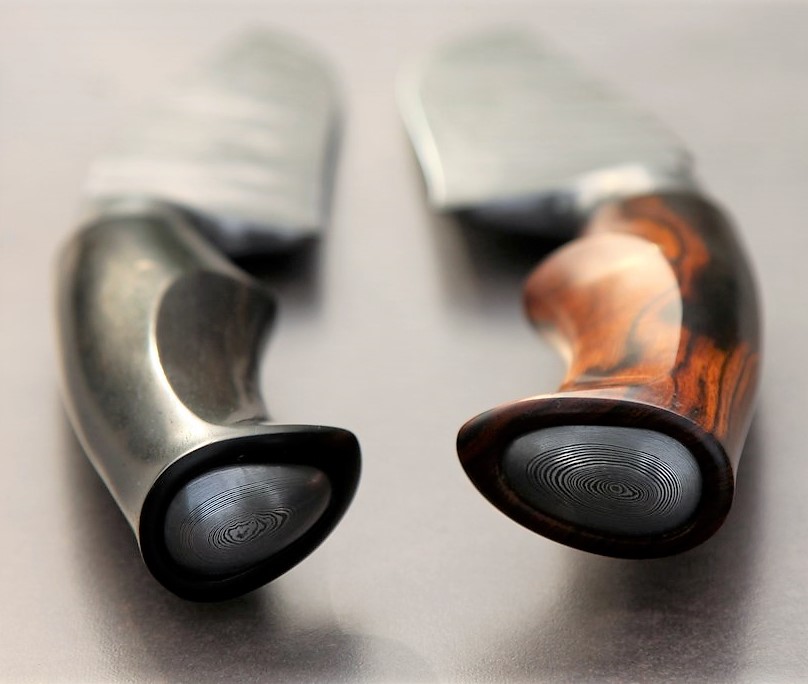 The Tiger and the Panther, two knives from home-made Damascus steel. The Panther has the black handle.
His focus up to now has been on fixed blades. We would call them integrals, but in Italy a fully integral knife must include the pommel. Oliver therefore refers to his knives as semi-integrals. He has not made a folding knife yet, but has little doubt that, in the future, he will. “I like folders very much, and one day I will make one. But it is a completely different world. So for now, I’ll continue to concentrate my efforts on my semi-integrals.” 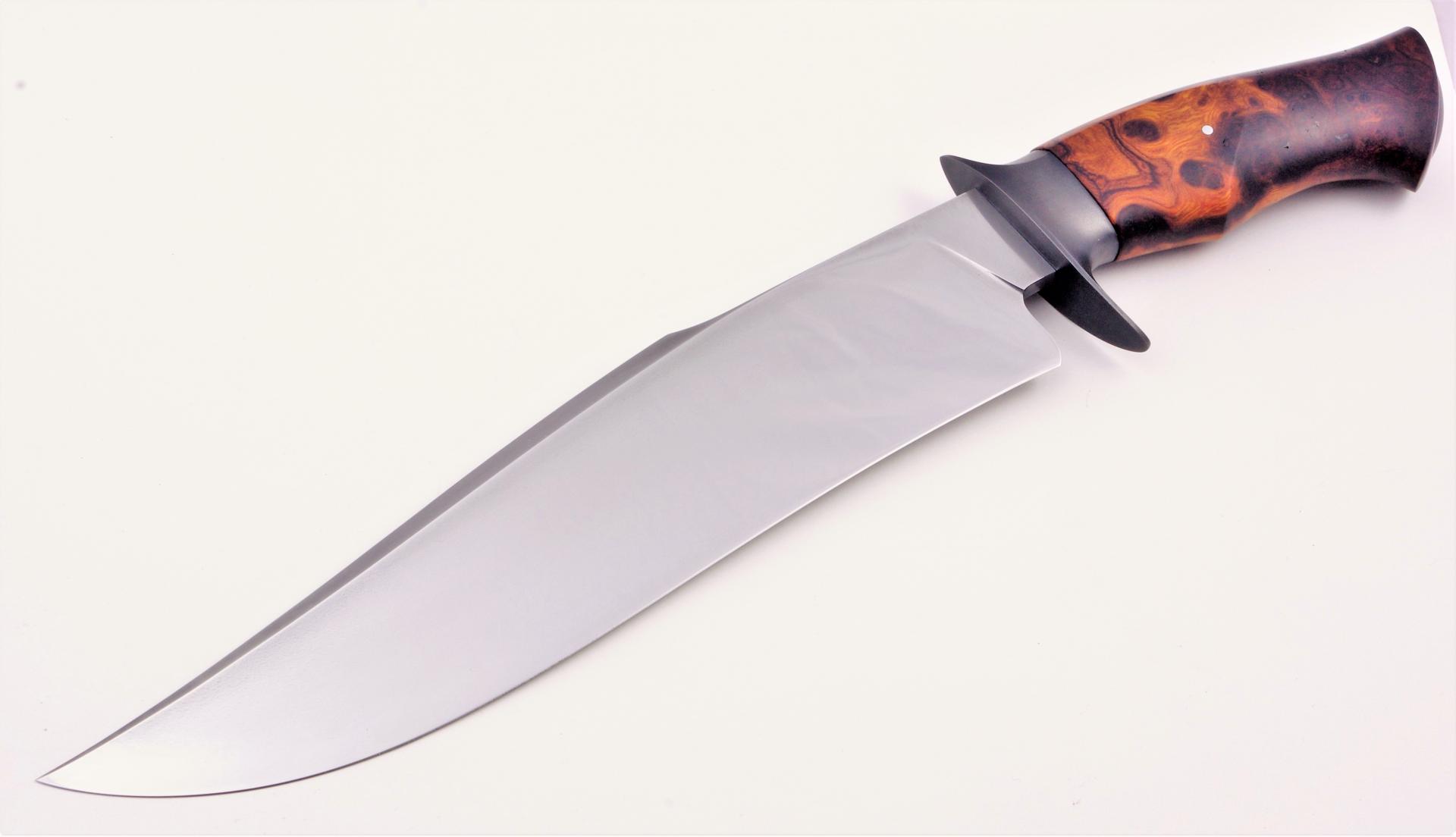 A big knife made from 125S steel with a very subtle hamon, which unfortunately does not show in the
picture.Guard and butt cap are from bead blasted O2. The blade has gotten a hot gun bluing finish.
The handle is Ironwood burl. 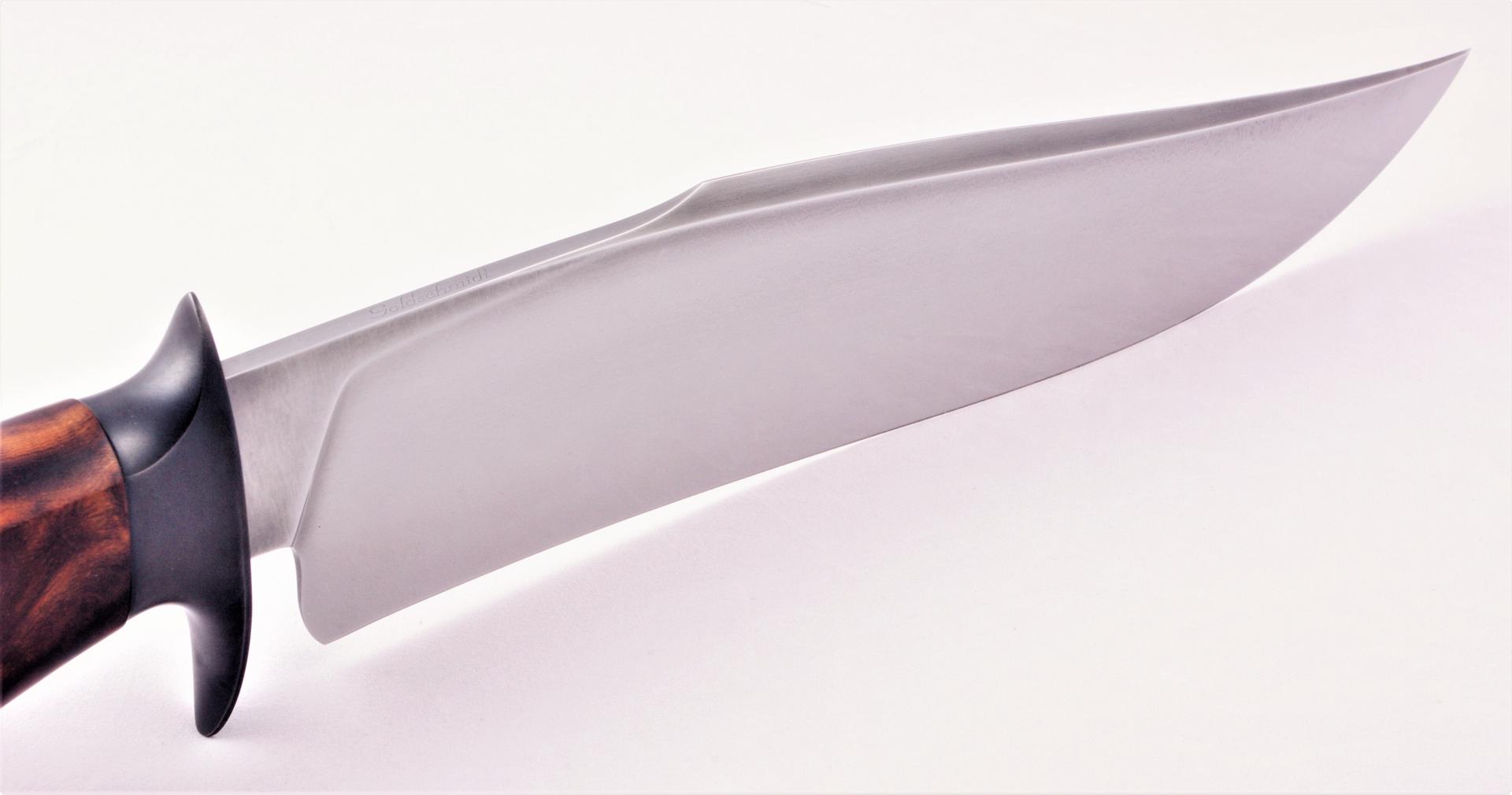 The blade and details of the knife show Oliver’s strive for perfection. Oliver signs his knives ‘Goldschmidt’
on the spine of the blade.

Advice
After having spent so much time teaching himself, is there some good advice which Oliver can give aspiring knife makers?
“The advantage of teaching yourself is that you make all the mistakes, and learn from them. If an experienced knife maker teaches you, you undoubtedly will learn faster, but you might also run the risk of learning his 'mistakes', which can make it harder to find your own way and style in knife making. I preferred to find out myself and I believe that patience is the key." 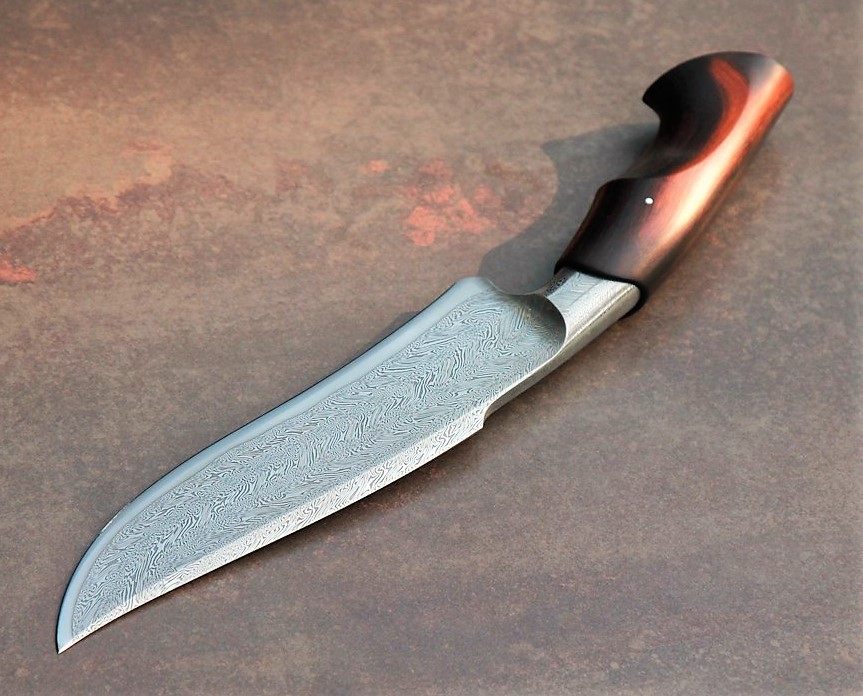