Do not get Guillaume Antoniucci (26) started on knives. Chances are, you’ll be stuck there the rest of the day – and night. On the other hand: please DO get Guillaume Antoniucci started on knives. You will be amazed at his knowledge and passion, his love for historical knives and knife-making equipment, his respect for real artistry and craftsmanship, and the way he jumps from one subject to another, in rather rapid French.

Guillaume Antoniucci in his workshop near Thiers, France.

There are people who make knives, and there are knife makers. For the first, it may be a hobby, or even a profession – but come on, there is more to life than knives, isn’t there? Well, not for the second group. For them, knife making is the passion, they simply can’t do without.
Guillaume Antoniucci belongs to the second group, there’s no doubt about that. He wanted to become a knife maker for as long as he can remember, and now that he is, he is enjoying every minute of it. Well almost, since unfortunately some of his time gets wasted on useless things, like sleep.
Guillaume was born and raised in Paris to a French mother and an Italian father - hence his last name. He doesn’t know exactly why he wanted to become a knife maker. Perhaps it was just something in his genes. It was not the most obvious choice for a youngster and a complicated one as well. Because how do you become a professional knife maker? 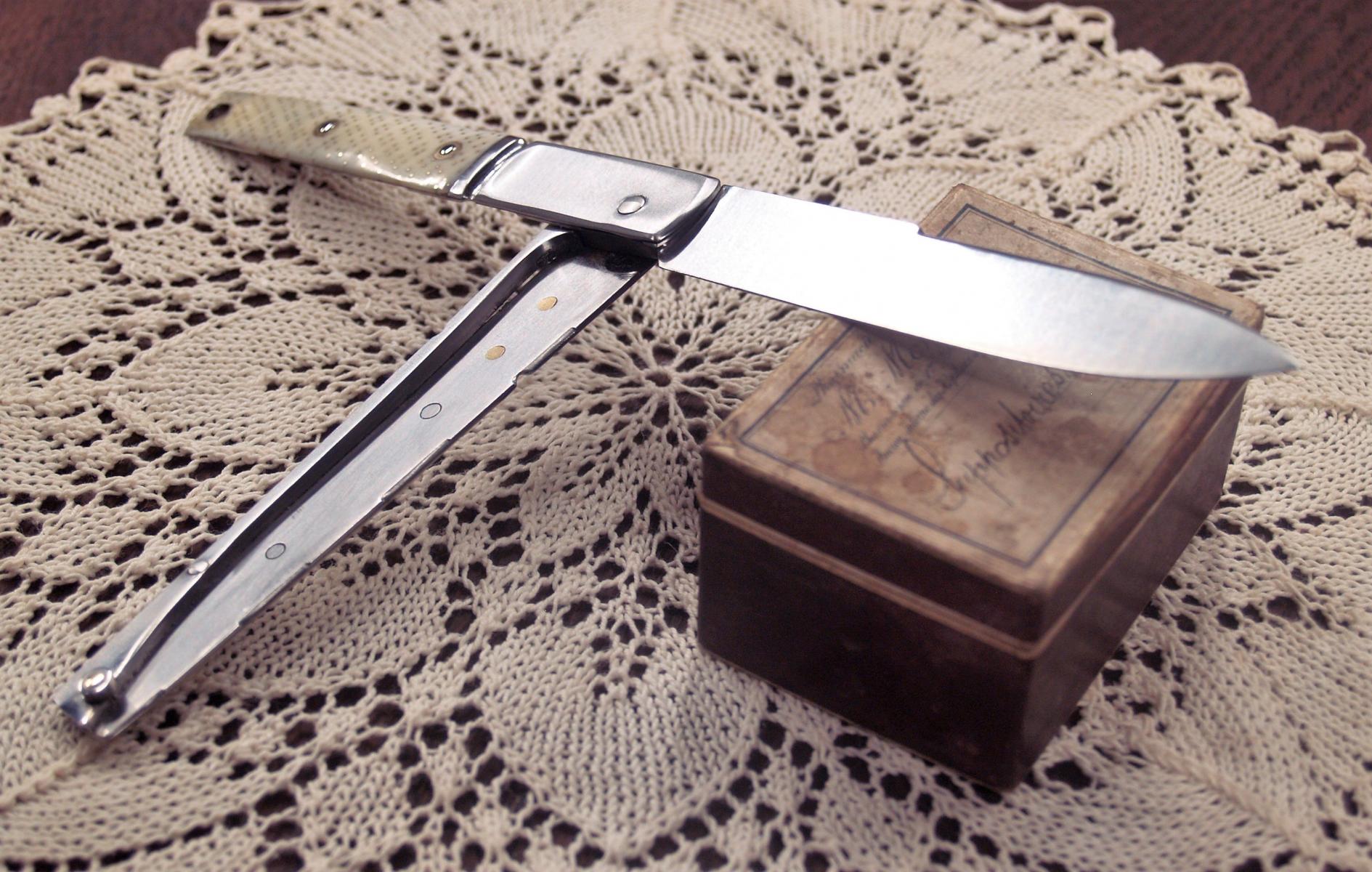 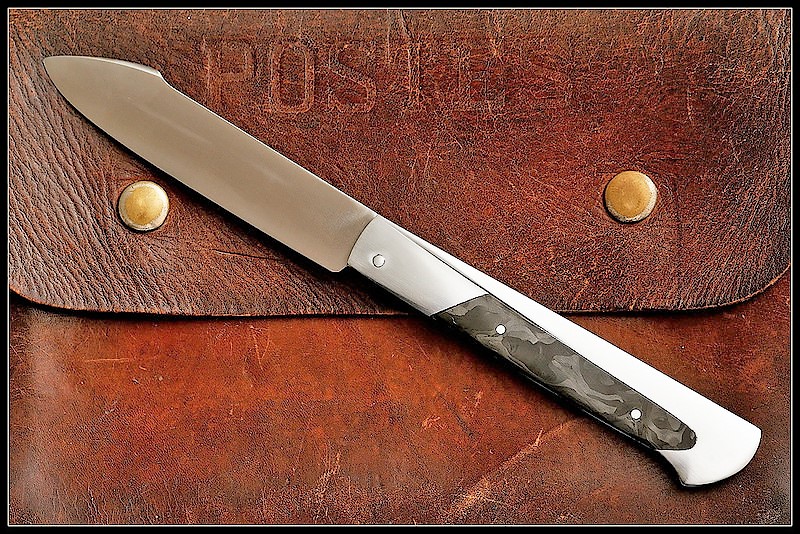 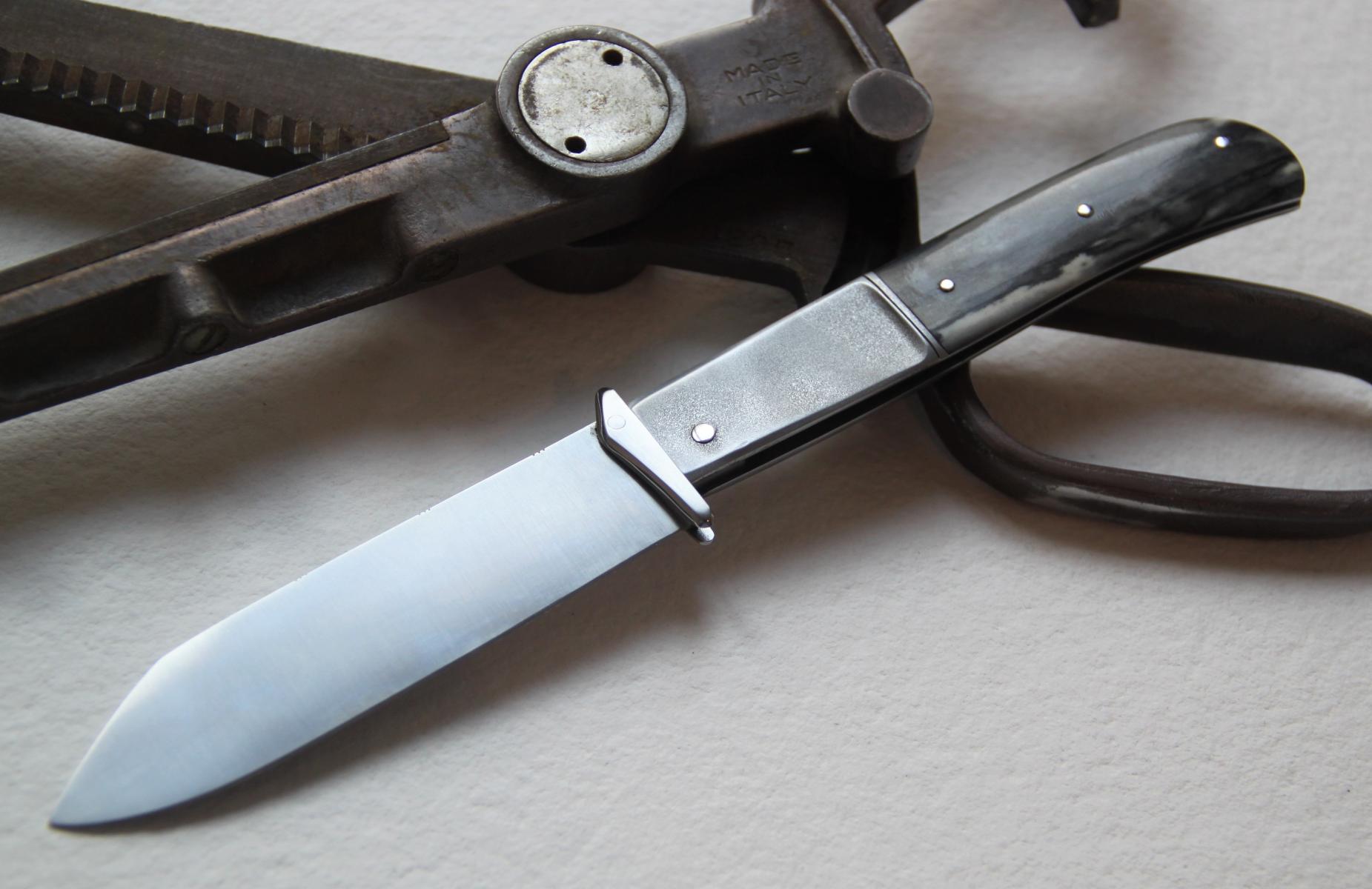 ‘The Praetorian’. A slip-joint folding knife with a moveable guard, pure iron bolsters and Kudu bone scales.
Fortunately, France is one of the countries where a formal education still exists in this area. At the age of 18, Guillaume moved to Thiers and took his apprenticeship at the Musée de la Coutellerie.
After completing his education, he went to work with Thiers knife maker Jean-Pierre Veysseyre. It was as if he had to start all over again. “When you quit school, you think you know it all”, says Guillaume. “But then I realised I knew nothing about making knives. Jean-Pierre taught me everything”.

An impressive fixed blade, with a 90MCV8 steel blade and deer antler handle.
His apprenticeship with Jean-Pierre Veyssyere lasted more than two years, after which, in 2013, Guillaume established himself as an independent knife maker. In the past five years he has explored many different aspects of knife making. “When I came to Thiers I wanted to make tactical knives”, Guillaume says. “I was into fixed blades, hunting knives, that was my aim.” However, some of the people he was working with made folding knives. With his eternal curiosity, Guillaume gave it a try. It proved to be much more difficult than he thought, and that irked his pride. “When I was young, I was rather stubborn. If someone said I could not do it, I got irritated and tried to prove them wrong”. It led to an exploration into almost every aspect of knife making.

‘Le Silon’ is a slip-joint folding knife with a D2 blade and carbon fibre handle.

Diversity
The knives pictured with this article are just a small selection of Guillaume’s production, but they show the diversity of his work. It ranges from 18th and 19th Century style French knives to kitchen knives, Bowies and high-tech Karambits.
Apart from knives, Guillaume has an interest in almost anything mechanical. “When I was 16, I repaired my first pin-fire revolver. It got me interested in mechanical systems, both in firearms and knives. I started to take apart old knives with interesting mechanisms and tried to copy that mechanism”. 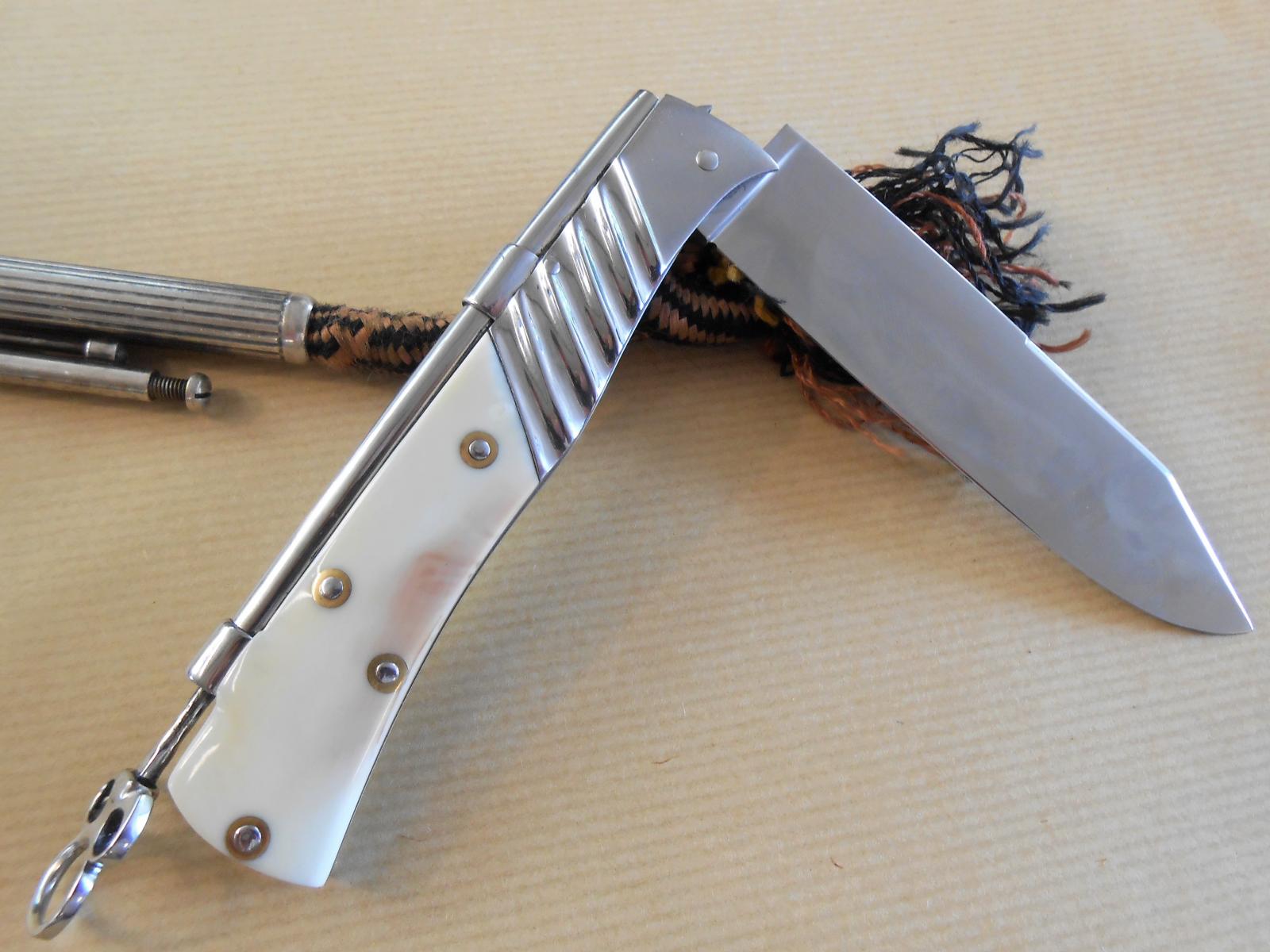 Guillaume’s favourites are knives with a secret. This one, inspired by an 18th Century example, has a key
on the spine of the handle which locks the blade. The blade is 90MCV8, the scales are Warthog. 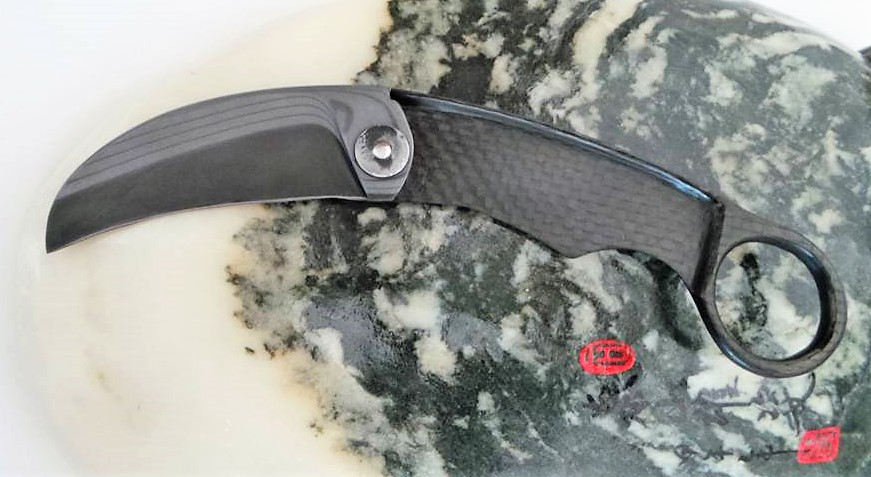 A ‘Piemontese Karambit’. The handle is one piece of Carbon Fibre, the blade is Japanese-style sandwich steel.
The result of that interest are a few big boxes underneath his work bench, with a staggering number of templates of different knife mechanisms. Guillaume has collected hundreds of knife mechanism patents. Through his contacts with some of the most important French knife collectors, he has been able to find many of the original versions. His aim is to recreate these, but as time is short, many of these models are still waiting to be transformed into finished knives. It doesn’t bother him: “I prefer the mechanism over the aesthetic aspect, rather than the other way around.”
In the last two or three years, Guillaume has become quite a popular knife maker. He stopped selling knives through Facebook, because he got too many orders. His production now consists of two groups: his custom knives, of which he makes a few dozen a year, and his industrial knives, consisting of his designs produced in small series by third parties.
It may seem surprising, that a knife maker does not know exactly what he makes, but an afternoon in Guillaume’s workshop explains a lot. There are dozens of knives laying around, in varying stages of production. Work or not, what Guillaume insists on is an occasional one or two weeks off for research and development. “I can afford that because of my industrial designs” he explains. 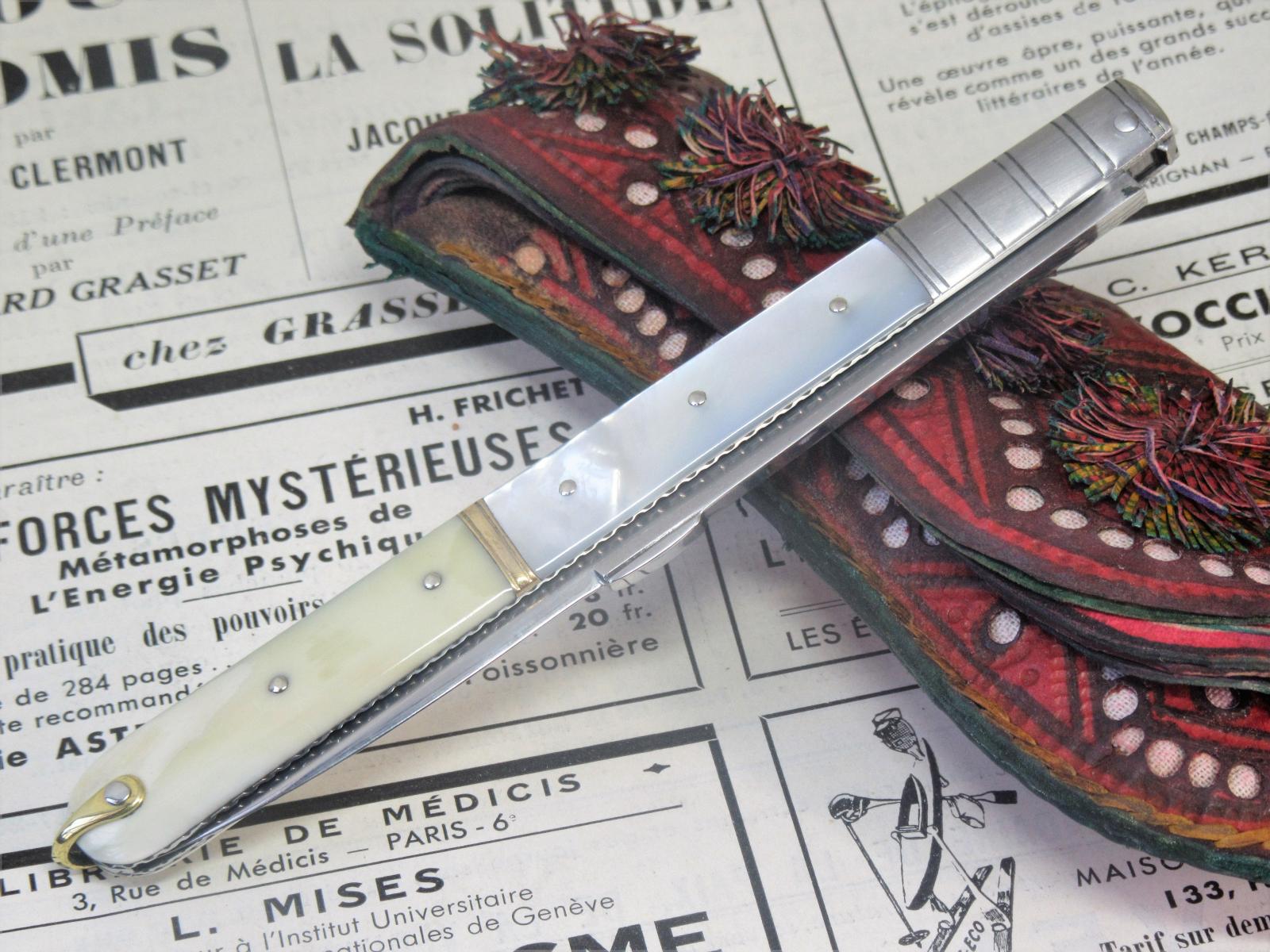 ‘Le dégustation’: a slip-joint folder with a handle made of Mother of Pearl and Warthog, with bronze intercalary. 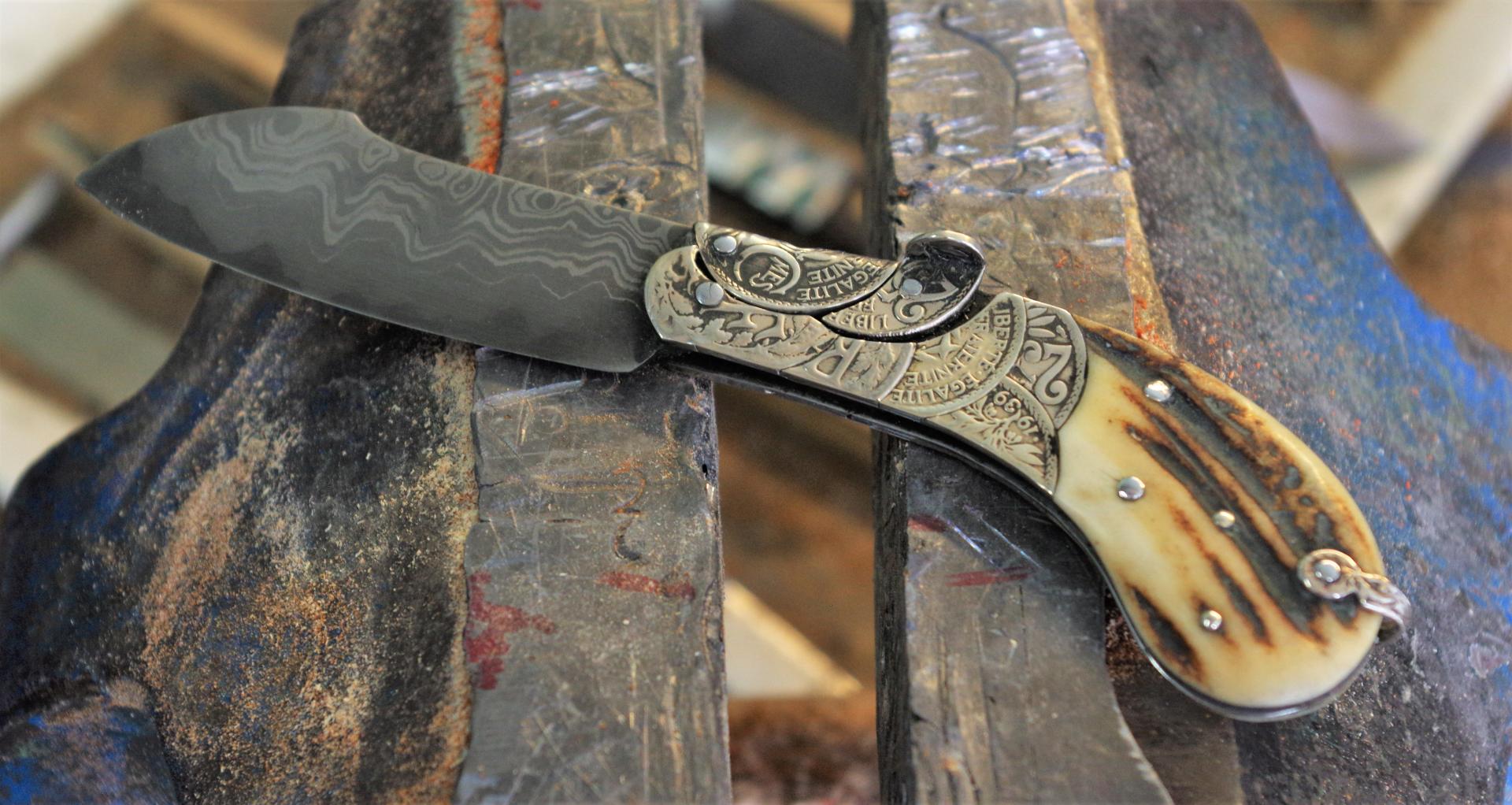 This pocket knife has a double locking mechanism, made of ancient 25 Centimes coins. The blade is
90MCV8 and old iron sandwich, the scales are Wapiti stag.
As far as his materials are concerned, Guillaume is just as omnivorous as his designs appear to be, almost anything goes. But of course, he has his favourites. He is an unconditional fan of D2 steel, or N690 if it needs to be stainless. Guillaume does not forge, he just doesn’t like it. His favourite handle materials are deer antler, warthog and mother of pearl. Warthog, according to Guillaume, is the best substitute for ivory. “It can have many different colours, and you can work it with incredible precision, up to 0.5 mm thickness. Dear antler needs a lot of attention, and you lose a lot of material, but if you do it right, the result can be stunning.” 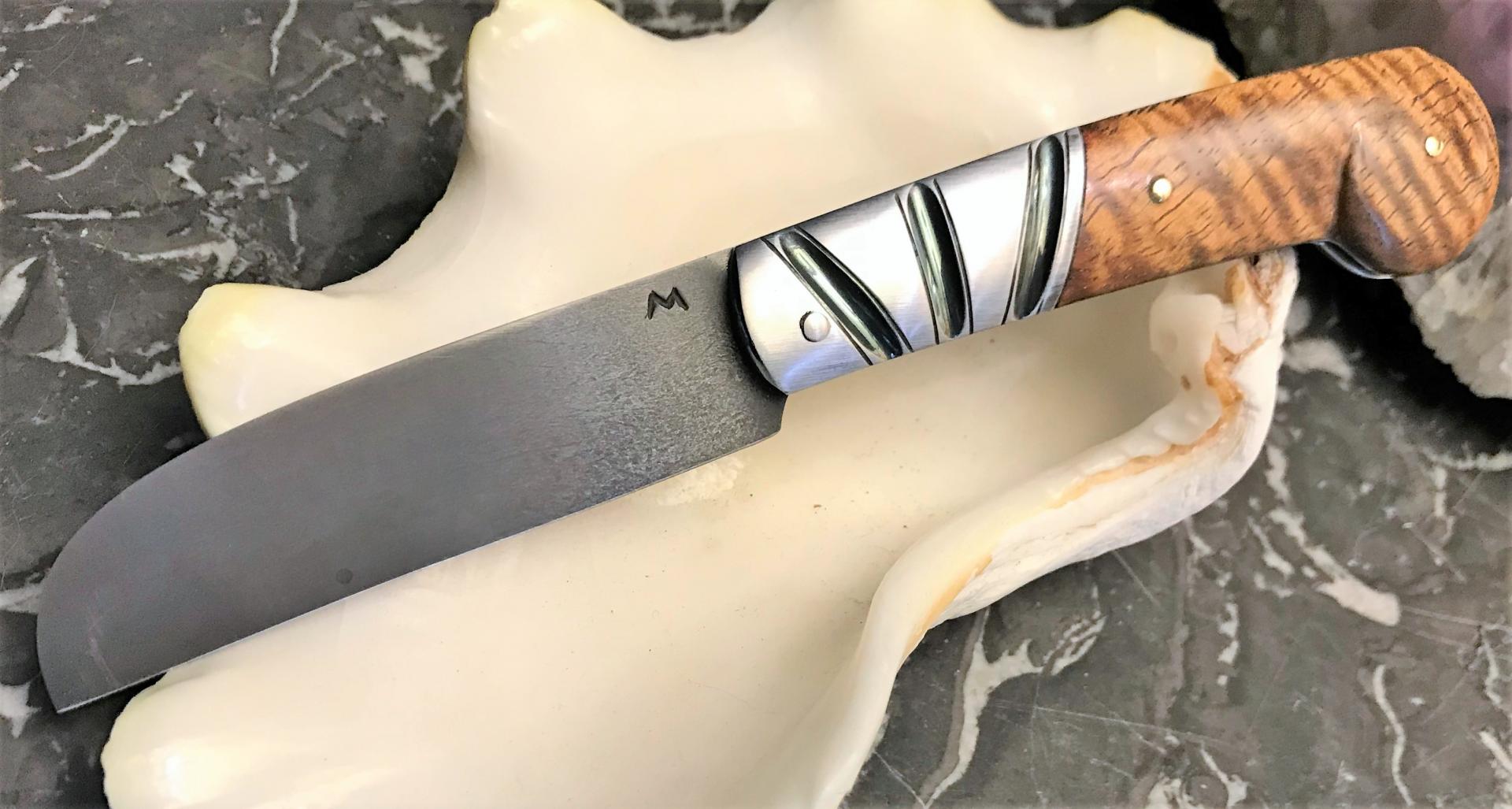 The ‘Kiwi’ is a slip-joint folding knife with a D2 blade, blued iron bolsters and a handle of Koa.

This knife is an interpretation of the knife with which Robert-François Damiens tried to kill King Louis XV
in 1757. De slip-joint knife has a handle of jasperized horn.

Teaching
Apart from making knives, Guillaume lives to pass on his knowledge to aspiring knife makers. There are always a few people in his workshop whom he teaches. It helps both himself and the students. He says. “You always need to keep wondering. Once you are content with what you do, you have stopped learning”.

This ‘Couteau de Manchot’ (one-handed knife) has a Z40Cr13 spoon, a 14C28N blade, a handle of white
Ebony, and a locking system which operates two springs so the knife can be opened and closed with one hand.

The locking mechanism of this knife is operated by a lateral moving lever
with a ring on its end. The left side of the handle is copper, the right side
stabilised Oak. 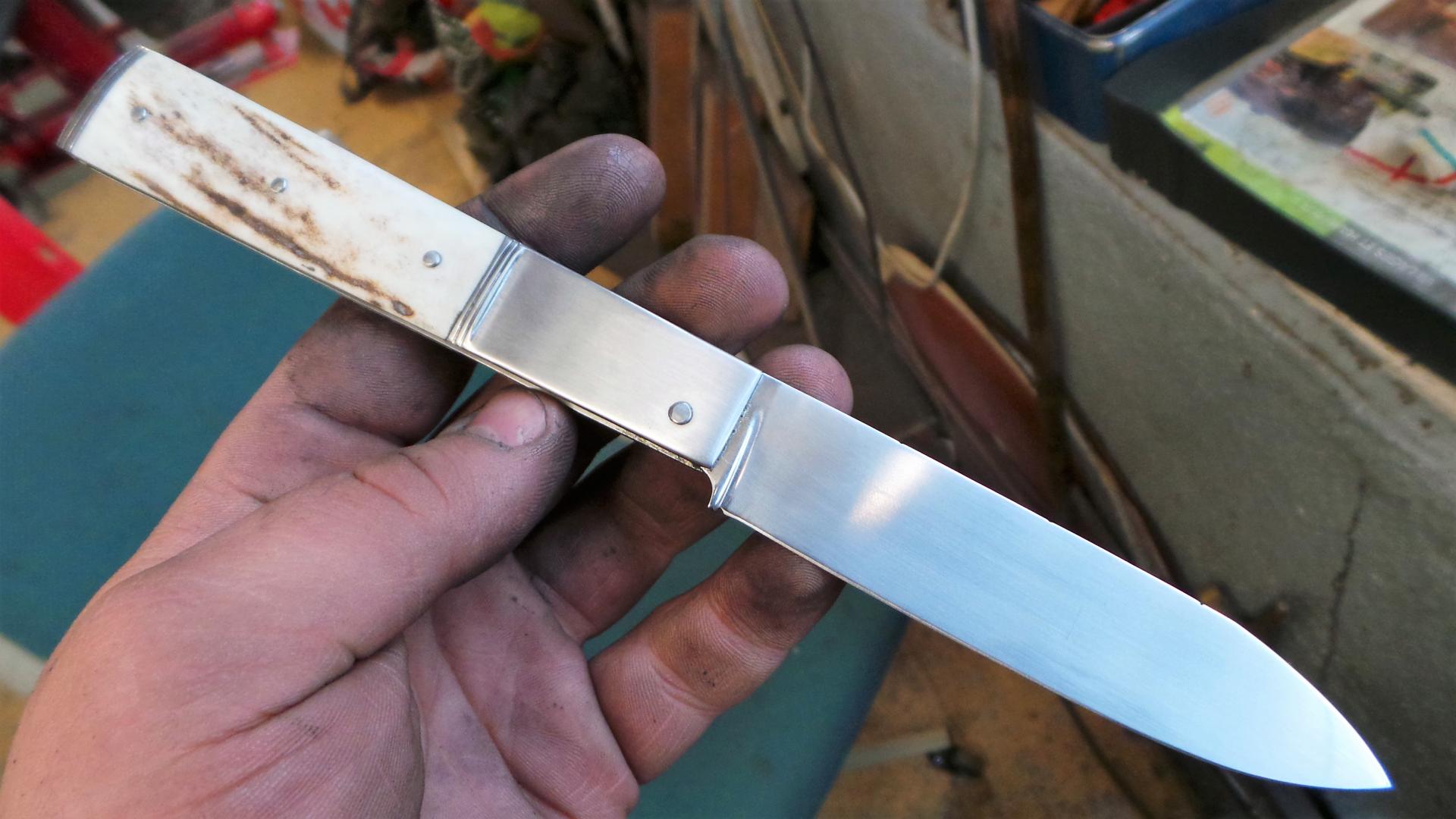 The ‘Simplex 1912’ was inspired by a 1912 catalogue of de Manufacture d’Armes et Cycles (Manufrance)
in St. Etienne. The blade is 90MCV8, the scales are deer antler. 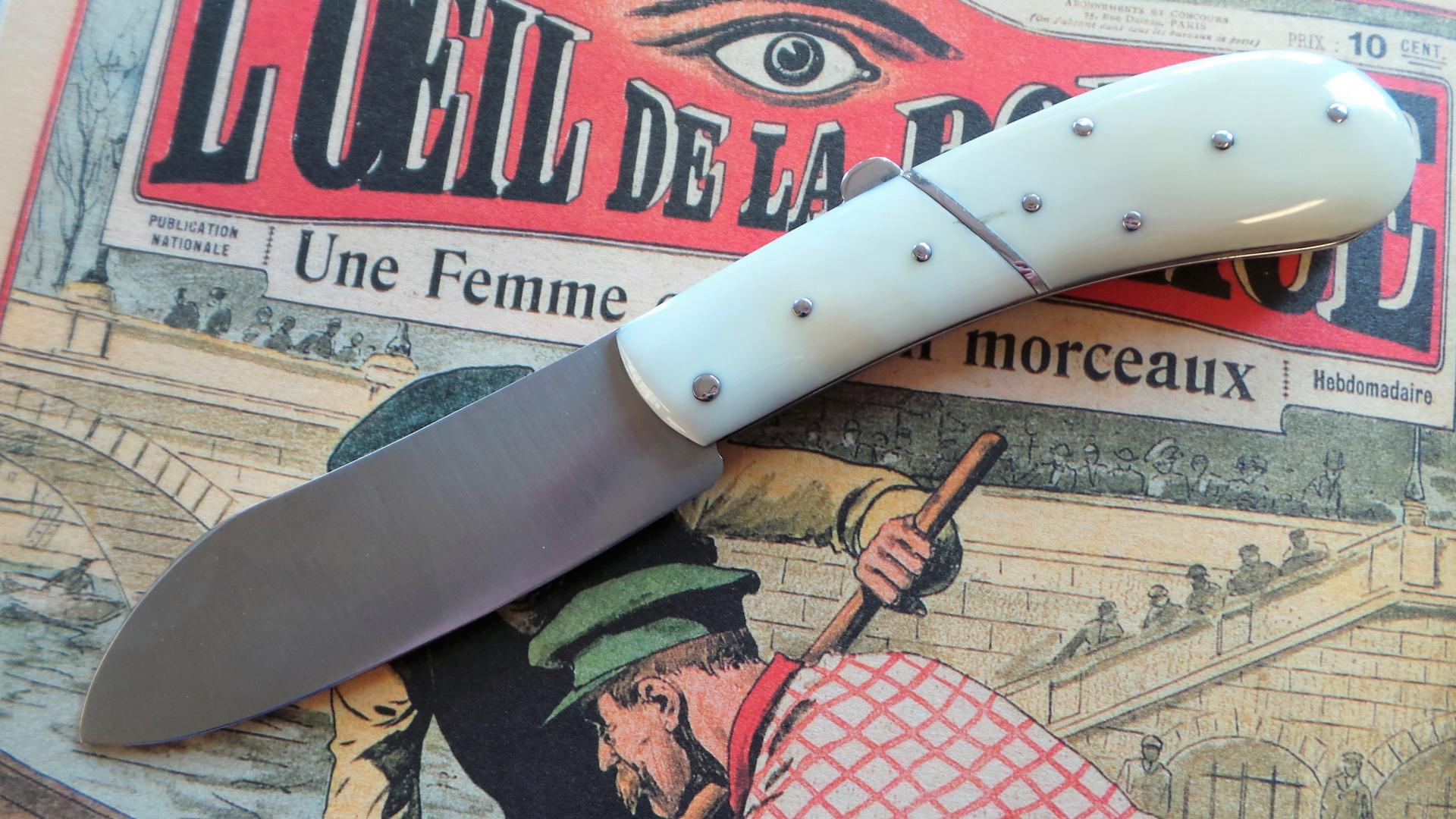