The knives by Eric Parmentier are widely sought after. On those rare occasions he’s seen at fairs, his offerings are sold out in no time. Furthermore, he only works on assignment. European Blades went in search of the secret to his success.
Text and pictures: Bas Martens 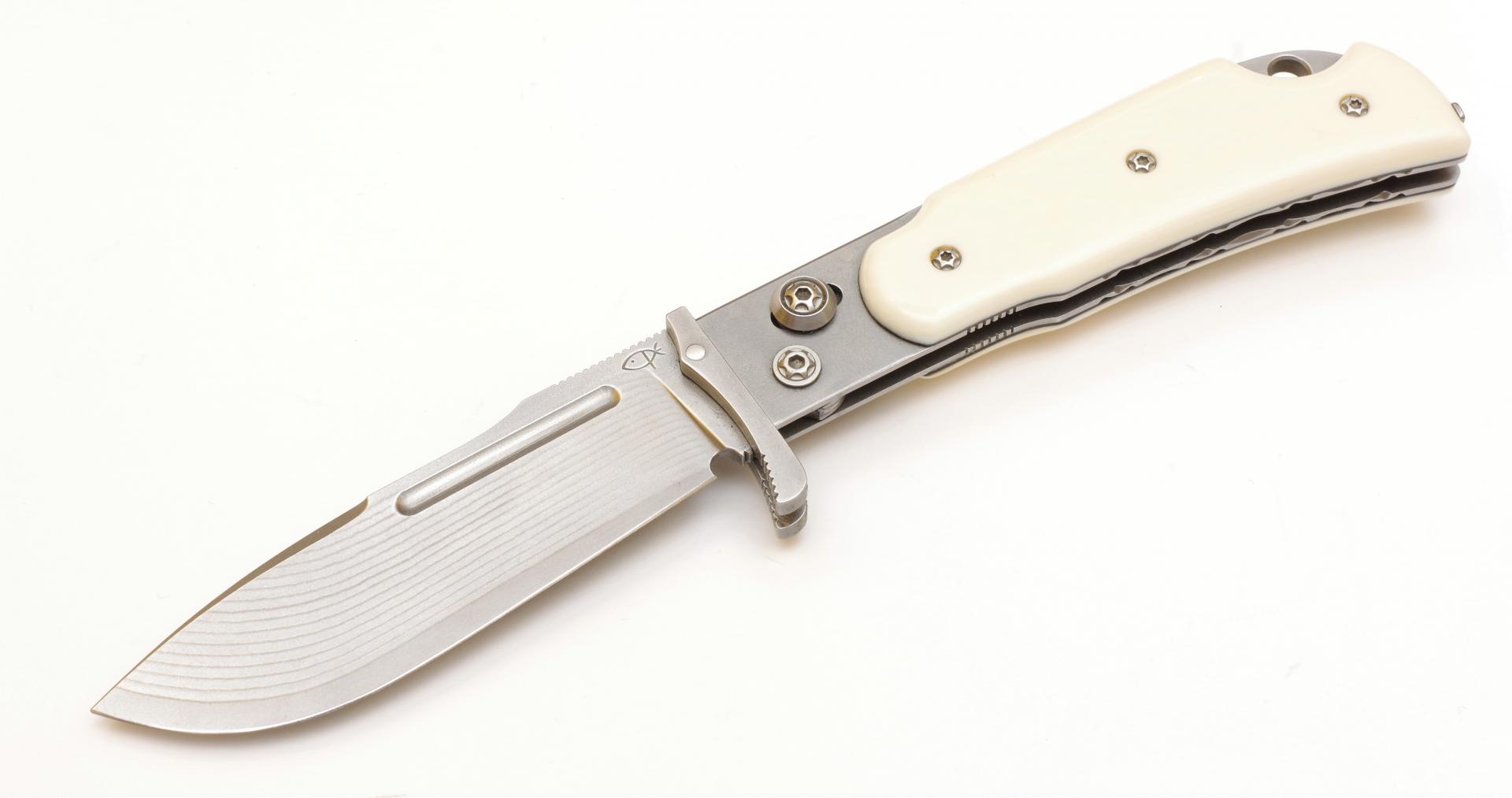 Eric Parmentier thinks that the ‘Destin’ is one of his finest knives. The blade is made of Suminagashi
(marbled steel), the handles are old ivory. (Collection: Gambino Enzo)
If the word ‘perfectionist’ didn’t already exist, then it would have likely been invented to describe the Belgian knife maker Eric Parmentier (53). Every detail of his knives must be perfect. He crafts all the components himself, down to the screws. It’s undoubtedly a tiring process for him, but he wouldn’t have it any other way.
Eric has spent his whole life working with his hands. He was a joiner and specialised in insulation techniques and acoustics. He was also a woodworking teacher and ran a carpentry firm. Eric, in short, was always busy working with wood and metal. 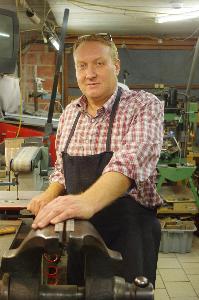 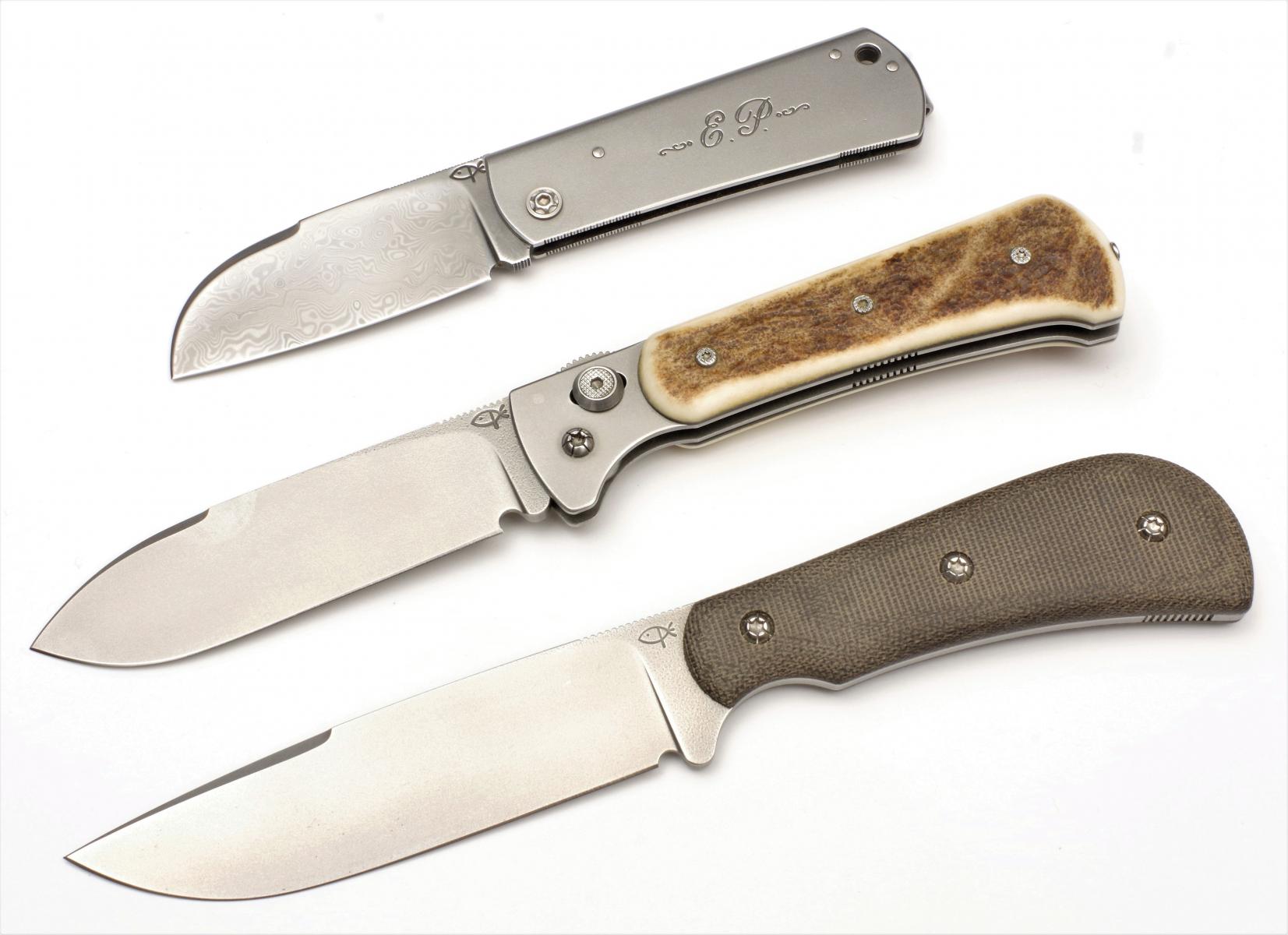 Left: Eric Parmentier is his workshop. His studio is at home.
Right: The three knives that Eric Parmentier uses himself. From top to bottom the ‘Perso’ with a blade of
Zladinox damask and a metal grip, the ‘Canadia’ with a blade of Niolox and a stag, and one of the few fixed
blades he’s made, the ‘Drache’. This one has a blade made of 14C28N and a handle of green micarta.
From a young age, knives were an important part of his life. He was in the scouts for years. He crafted his first knife almost thirty years ago. The reason, so often heard, is that he couldn’t find a knife he liked. That may sound peculiar, but the pickings were slim thirty years ago, far more so than today. Eric wanted a knife with a high blade, and that just wasn’t easily available. The handle he crafted from the tropical wood found on the pallets from Brazil and Africa; the blade he fashioned out of used saws. The information needed to put it together, for good or ill, he gathered from the library.
He brought his first knives to an exhibition in Nontron, where he quickly sold all his pieces. With the money from his sales he bought the machines he needed to craft increasingly sophisticated knives, and so the wheels were set in motion. On a good day, Eric decided to leave his carpentry firm. Too much work, too many problems with the staff, too many worries, henceforth would devote all his time to knifemaking.
His wife, Véronique, said he was mad but the decision to move into this new field proved to be a good one. Within two years, Eric Parmentier – a Belgian – was listed as one of the top ten French knifemakers in the magazine Passion des Coutaux. Since then he hasn’t really had to try hard to sell his knives. “My customers put my knives on the internet. They advertise my work for me”, he says happily. 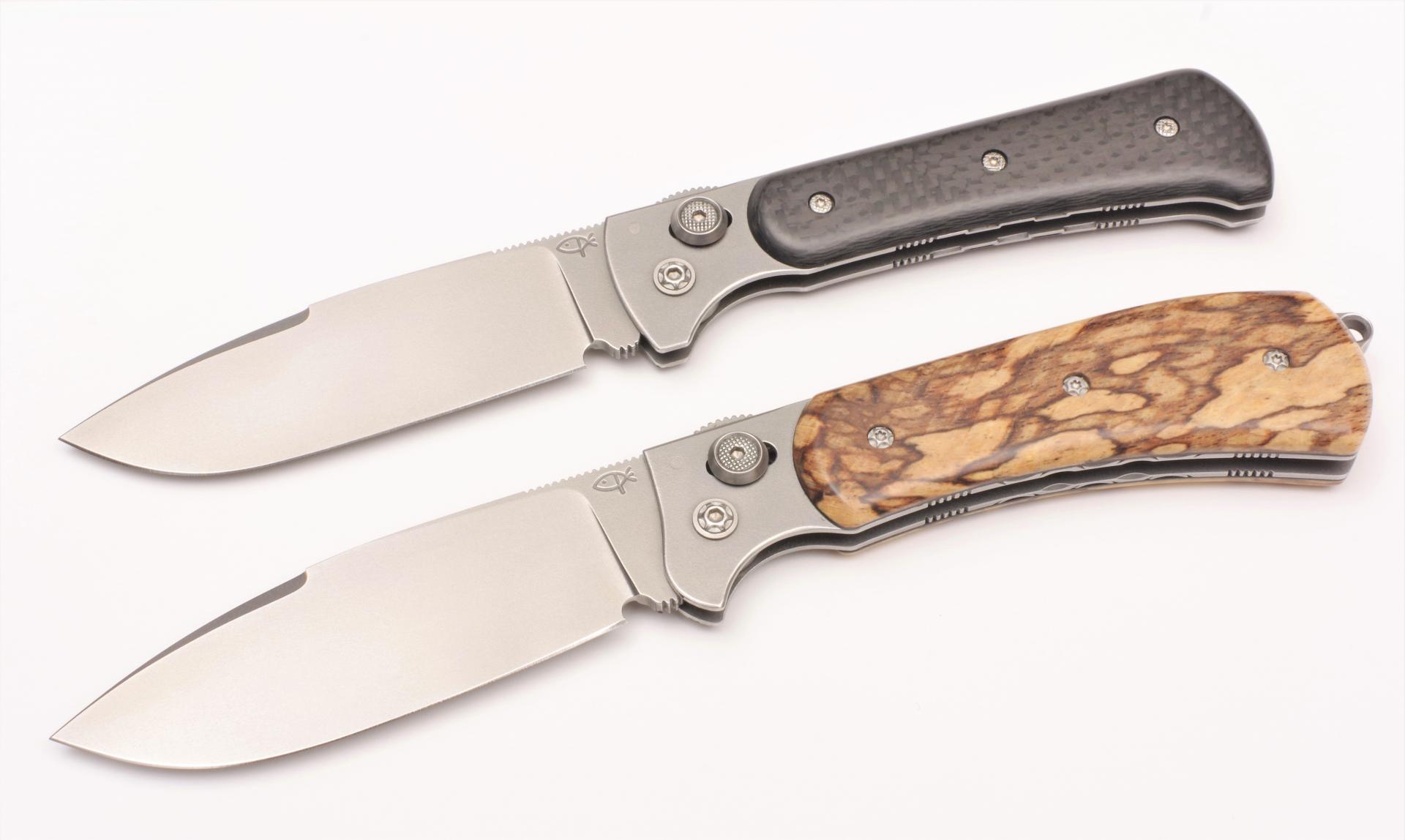 Recognition
The knives by Eric Parmentier are very recognisable. However, as one collector noted: “no Parmentier is ever the same”. Eric will sometimes craft a series of small, numbered pieces at the special request of a club or knife forum. There are some collectors who ask for an identical pair of knives: one to use, the other to place in their showcase. Yet, even these will probably be slightly different. Eric says: “Even the same model is often not the same. My work is all done by hand. It’s very difficult to make identical knives”.
The production output of Eric Parmentier is limited. Due to the demands of him working by hand he rarely makes more than ten knives a month. These are almost exclusively folding knives as this demands more input from him. Eric Parmentier is delighted by little mechanical features. He enjoys experimenting with locks and latches. One of which he has even patented; a folding knife with a piston-rod instead of a spring in the handle.
As for materials, Eric is an omnivore. He uses 14C2N, RWL34, Niolox by Achim Wirtz, N690 Böhler, S30V and damask steel, with a particular preference for rustproof materials. For the liners he usually opts to use Z20C13, and for the parts that make up the lock, Z40C13. As for the handle, he isn’t picky. Wood, ivory, carbon fibre, G-10, Micarta – everything is possible. 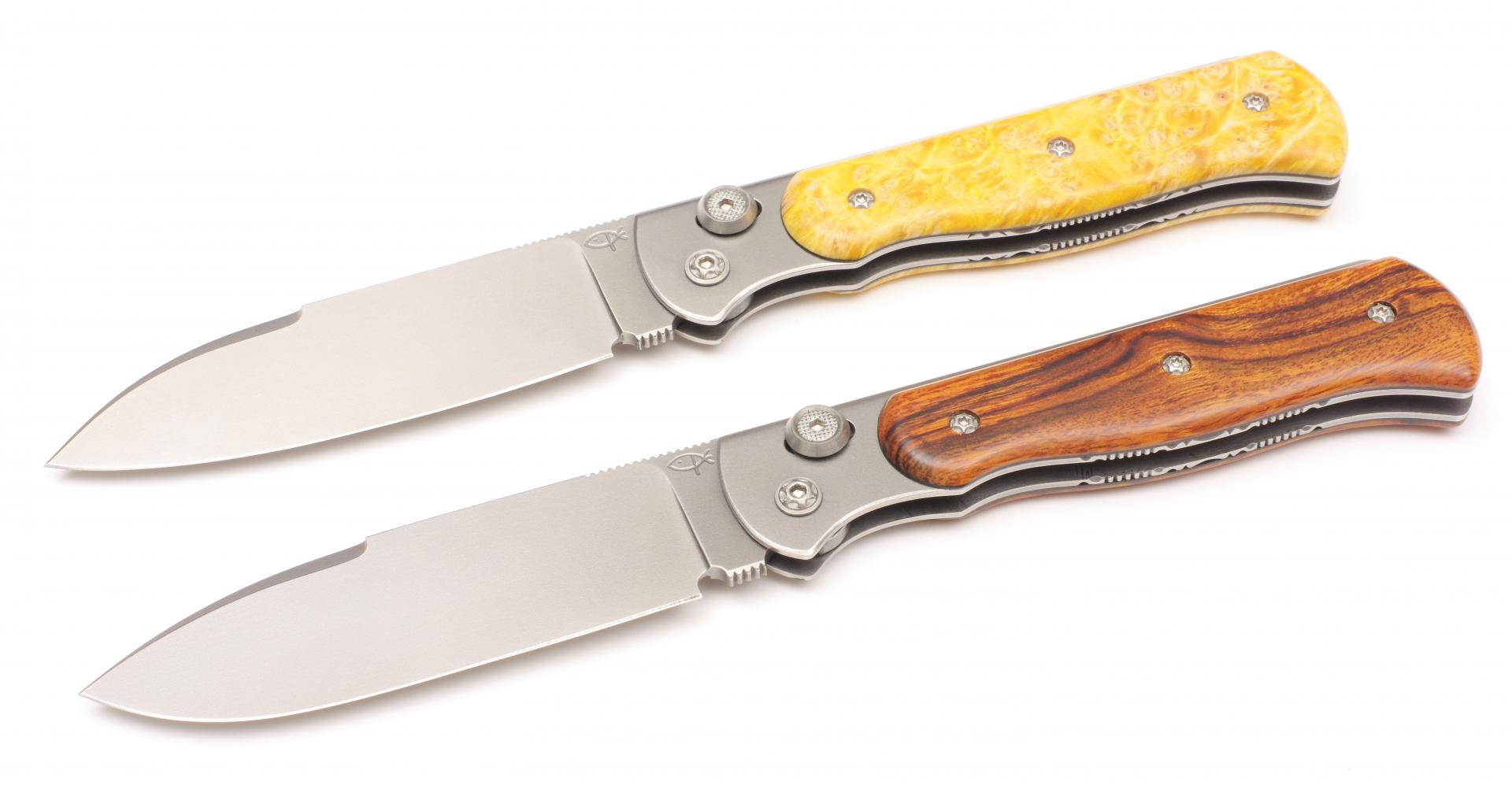 The ‘Morfil’ (top) and the ‘Morpho’. Both have a blade made of 14C28N. The ‘Morfil’ has handles of
beech burl, the ‘Morpho’ of Ironwood.
Logo
Eric Parmentier’s logo may resemble little more than a simple fish, but there is a story there. His ancestors were bladesmiths and fishermen in France. In the 16th century acquired their own family coat of arms with the text: ‘Pera Manter’, which means ‘working with passion’. The name, over the years, has been warped to ‘Parmentier’. The logo brings together these different facets. The fish stands for the history in fishing, the tails contains the letters ‘P’ and ‘E’, for Eric Parmentier. If the logo is turned around the letters ‘E’ and ‘P’ together form the French word Epée (Sword) and that points to the family history steeped in bladesmithing. 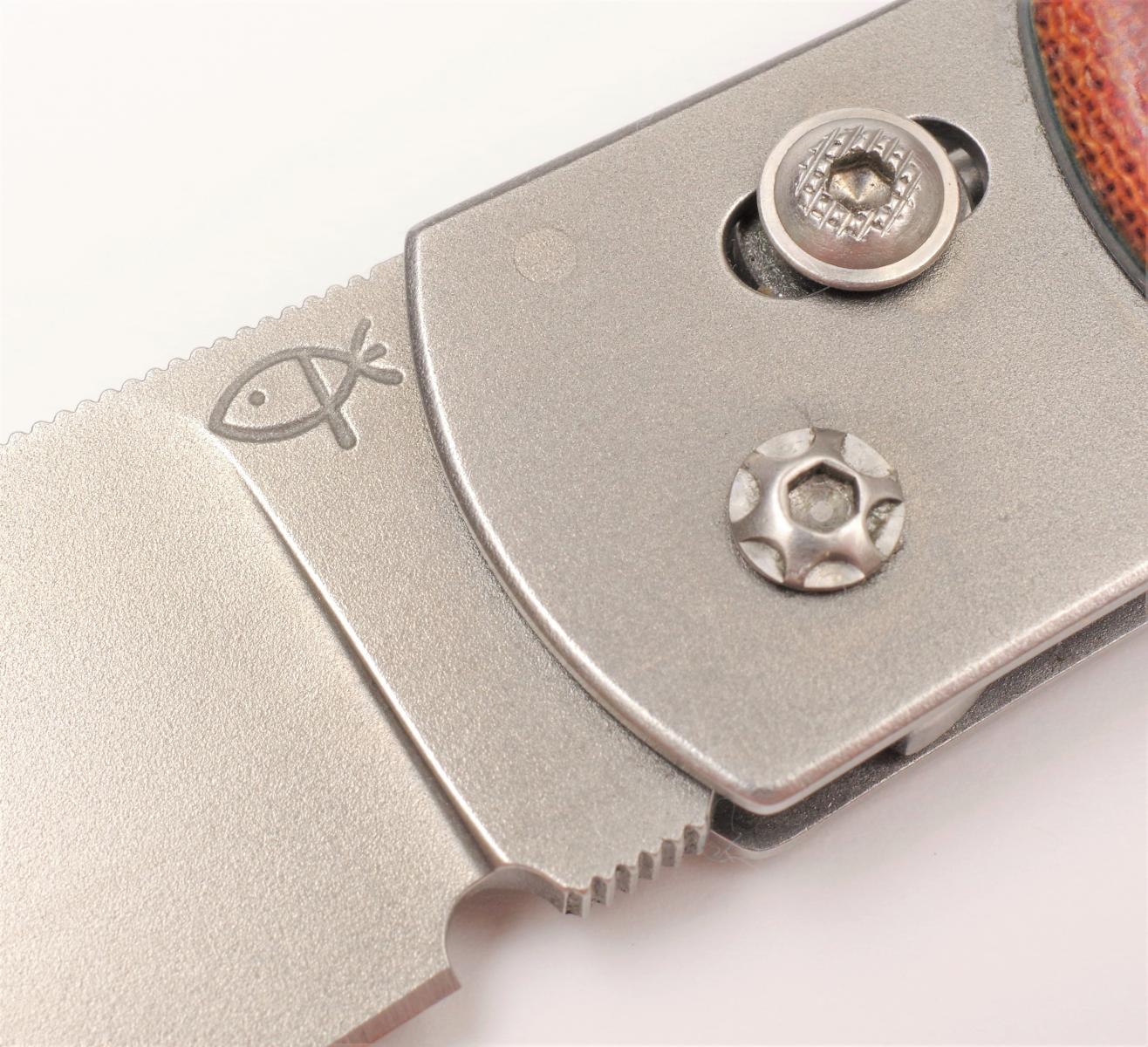 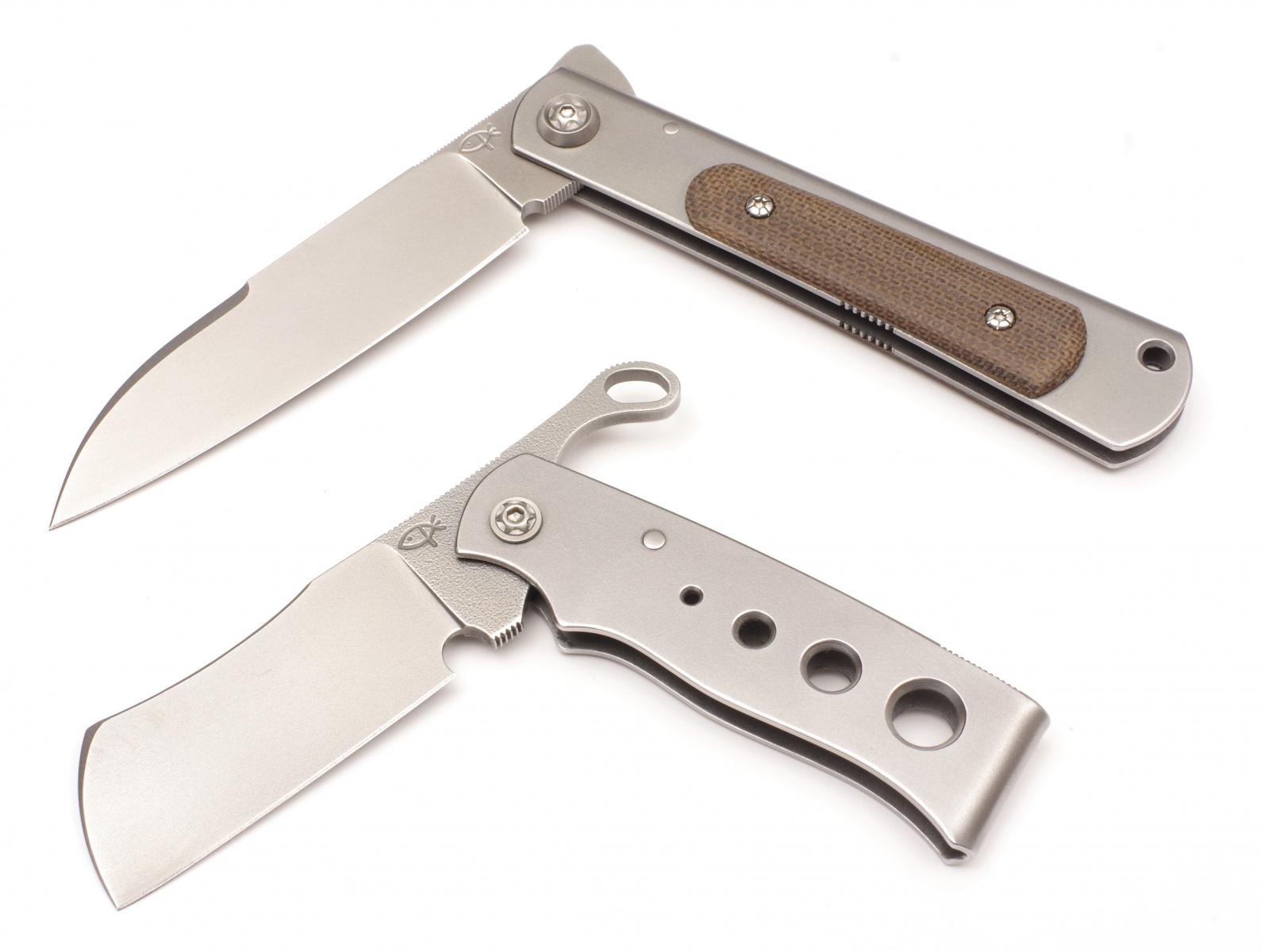 Left: Eric Parmentier’s logo, a fish with the letters ‘E’ and ‘P’.
Right: The ‘Ibis’ (top) and the ‘Urbanica’ are both slip-joint folding knives. The ‘Ibis’ has a blade of RWL34
and handles of micarta. The ‘Urbanica’ has a blade made of Niolox and a metal handle.
Design
When it comes to the craftmanship that goes into the knives, Eric is methodical to a fault. Eric first creates a design using a computer. He has racked up over 140 different models, and that’s not even taking into account the different materials he could use for the handles. For each of the models he has the mould to, for instance, make the shape of the handle. 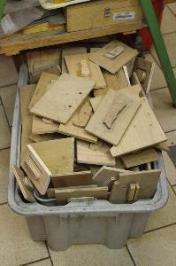 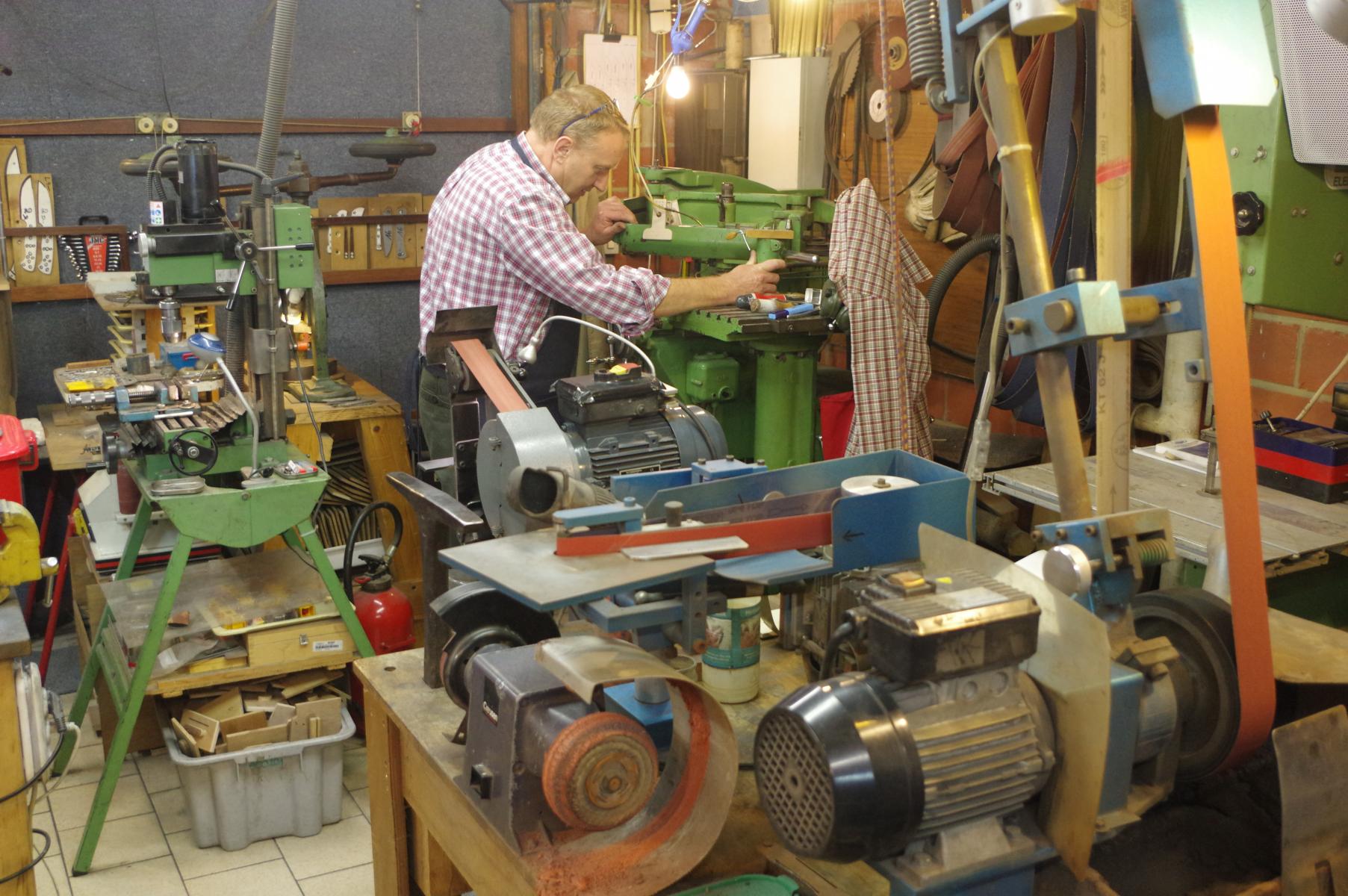 Left: Eric has made around 140 different models. He keeps every drawing and mould for each model,
like the shape of the handle.
Right: Eric Parmentier’s workspace at home.

Above and below: The ‘Morphalou’ has a blade made of Inox Damask and handles of mammoth ivory. 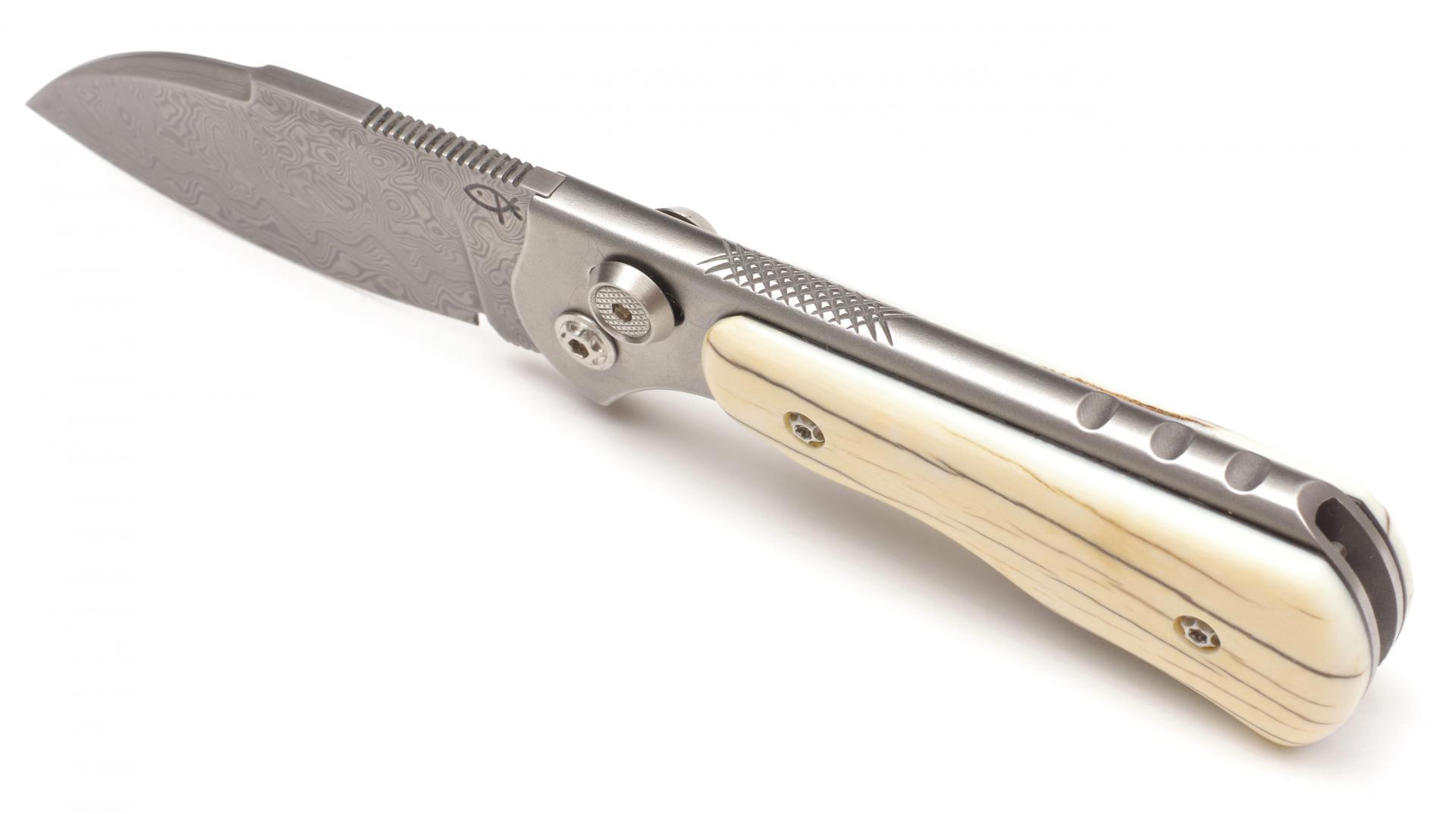 The continuous alterations and limited production make his knives exceedingly special. Indeed, no Parmentier is ever the same, and at the same time he shows a wonderous combination of experimentation and working by assignments. Véronique shows us a thick file, full of order forms, all of which are currently being processed. There’s at least a year’s work there. Doesn’t Eric get nervous about the number of orders? He laughs: “On the contrary! I came from the construction sector. An assignment is security. It’s comforting, it’s what I need”. 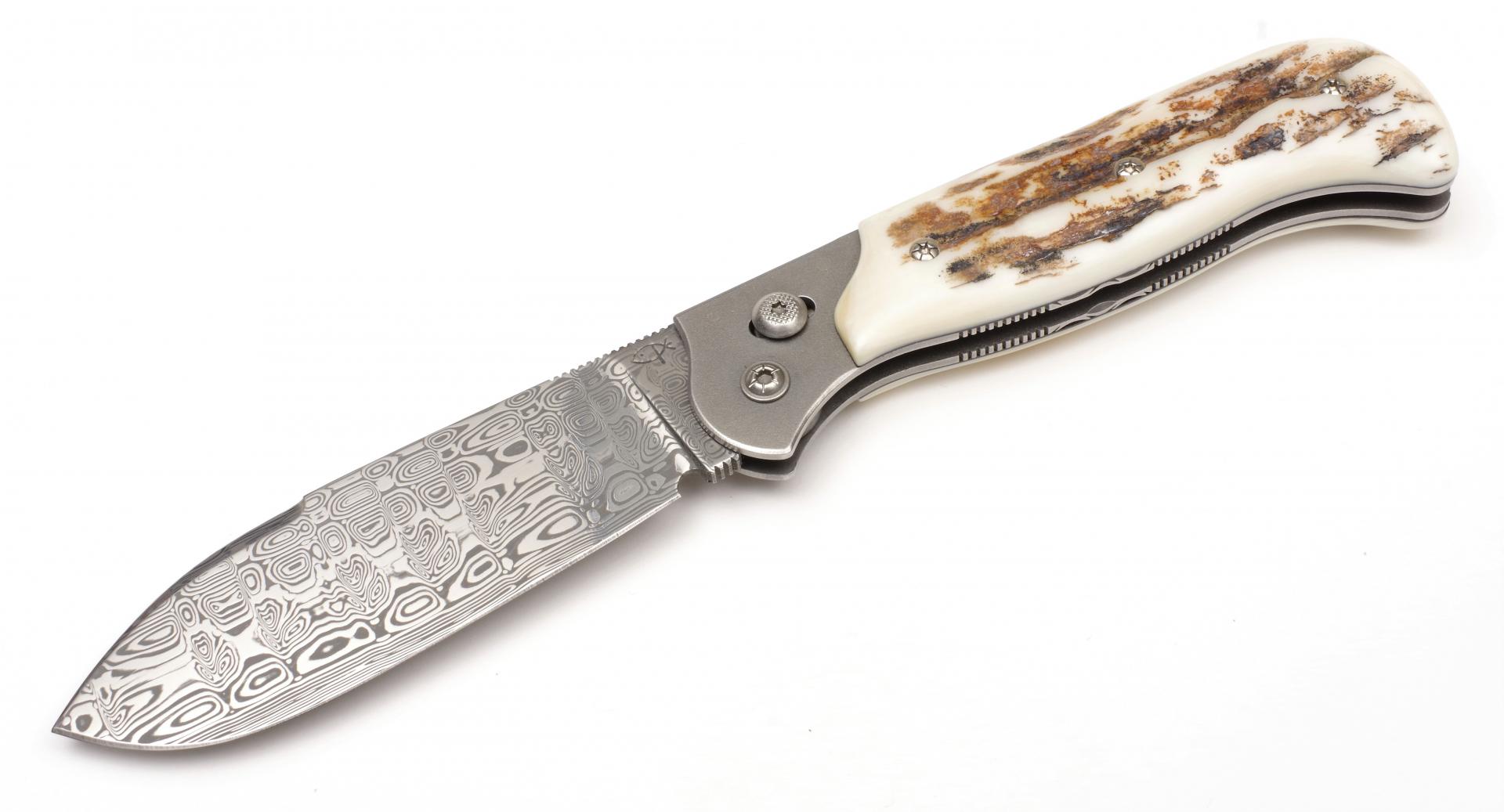 The ‘Safari’ has a blade of damask and handles of mammoth ivory with a drawing that looks like deer stag. 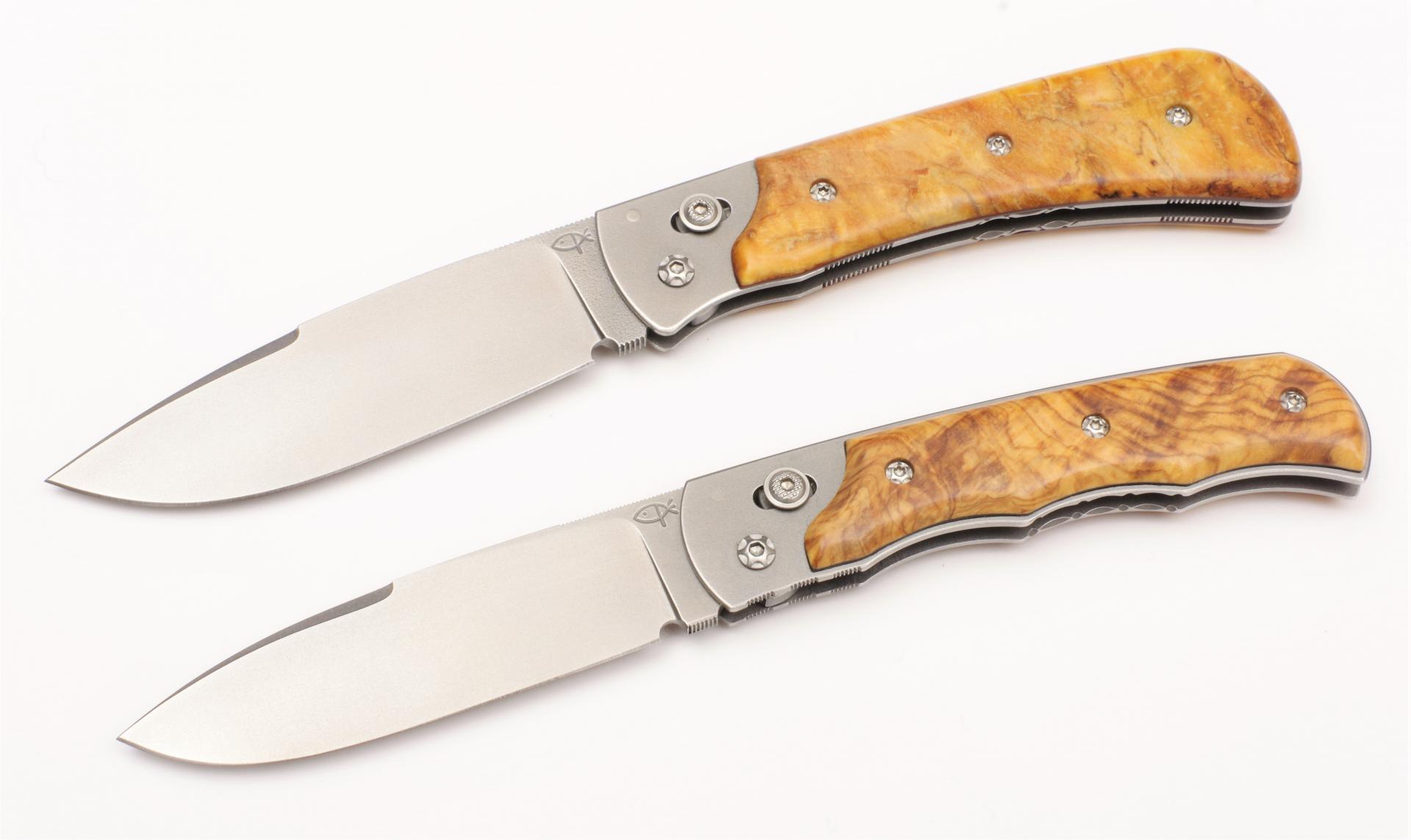 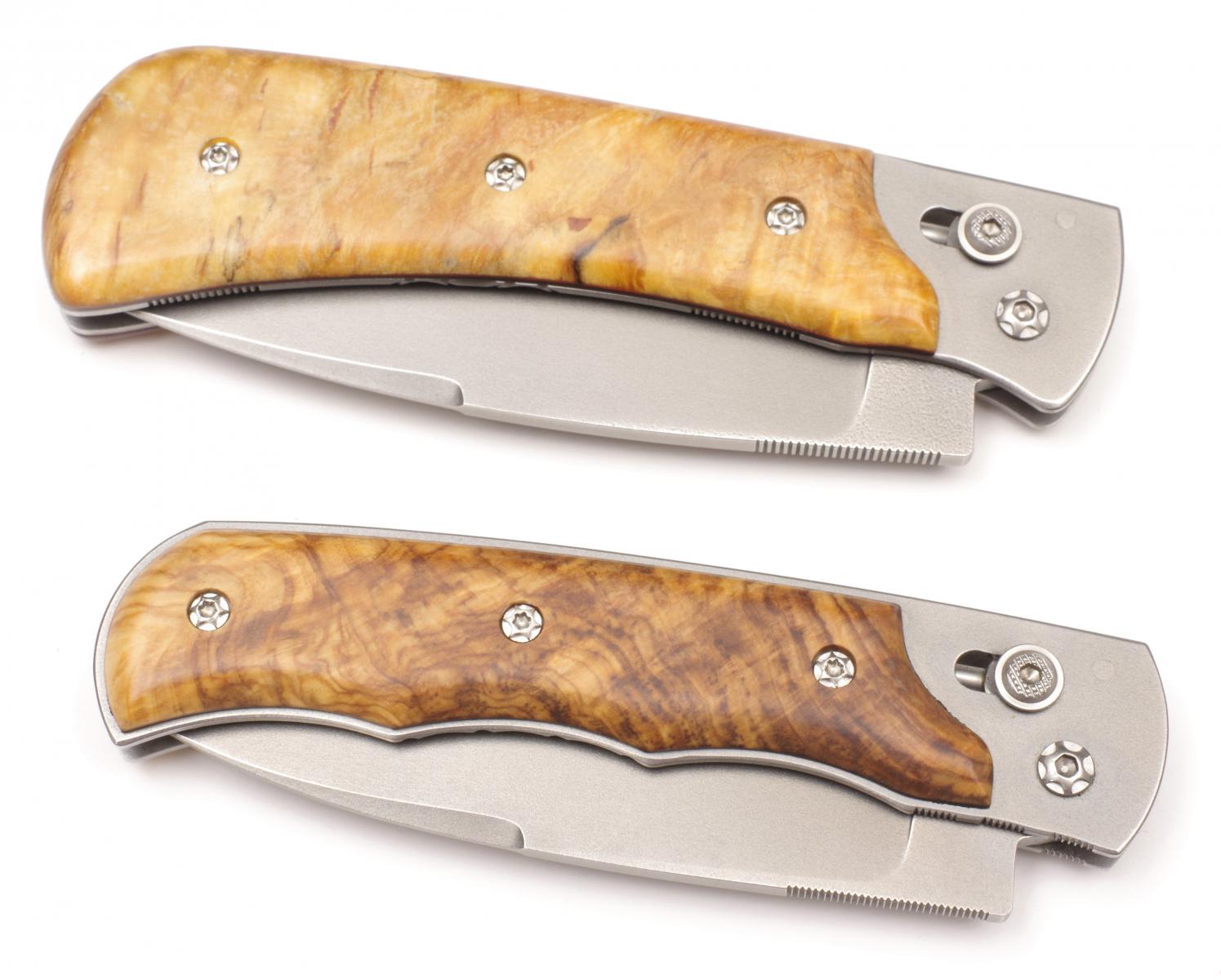 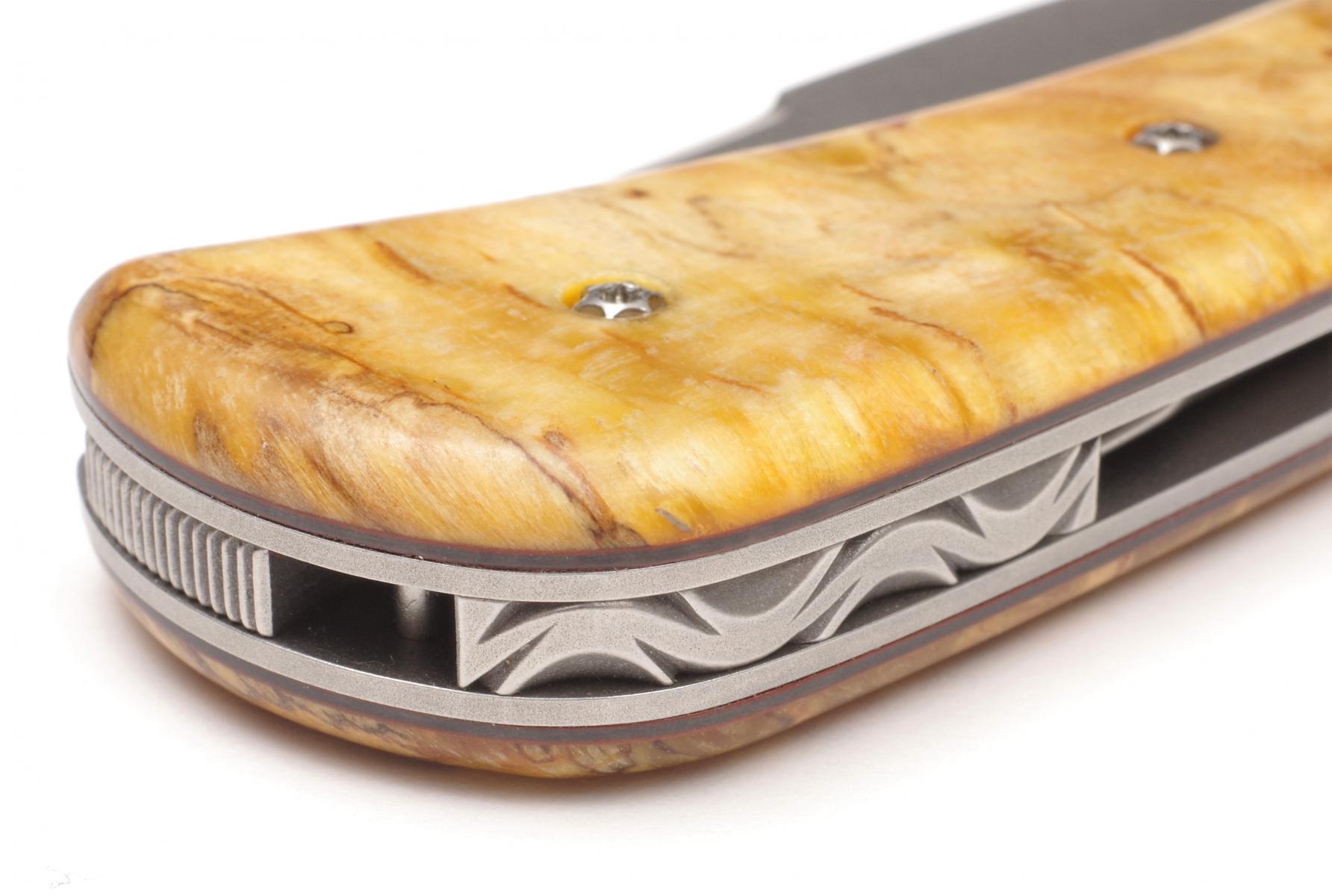 Left: The ‘Vadrouille’ (top) and the ‘Explorateur’ closed. Right: File-decorations on the ‘Vadrouille’. In between
the wooden handles and the metal handle Eric Parmentier always places spacers to stabilize the wood.
Alongside the orders, Eric and Véronique visit three fairs a year. At the moment, they are usually present at Gembloux and Strasbourg. However, Eric tries to visit at least one random fair every year. In 2018 that will probably be the Dutch Knife Exhibition in Tiel. The knife shows aren’t important to sales, Eric will probably sell all his knives anyway. Some customers are even prone to complain about his visits to fairs. “Some people get angry because they’re told they would have to wait a year for their knife, whereas someone at the show can buy one immediately”. The knife shows are important for Eric to, for instance, have some interaction between knifemaker and knife-lover. Eric Parmentier: “A lot of people like to get their picture taken with me and their knife. In the beginning, I thought this rather embarrassing, but I’ve grown accustomed to it. People like to show others who made their knife. And yes, interacting with the customer is important”.
Moreover, a knife show is useful for purchasing materials. As a former joiner, Eric knows what kind of wood he’s looking for. He prefers to look and judge the material himself. This is easier to do at a fair.
The Best Knife
There are knifemakers who are never happy. Their best knife is still lying in wait for them to make it. In this respect Eric Parmentier is noticeably sedate. “I’m always striving for perfection but at a certain point you can’t move past the capabilities of the machines you’re using. I try not to repeat my work, but I’m also happy not to be much better than I am. I don’t want to be a celebrity.” 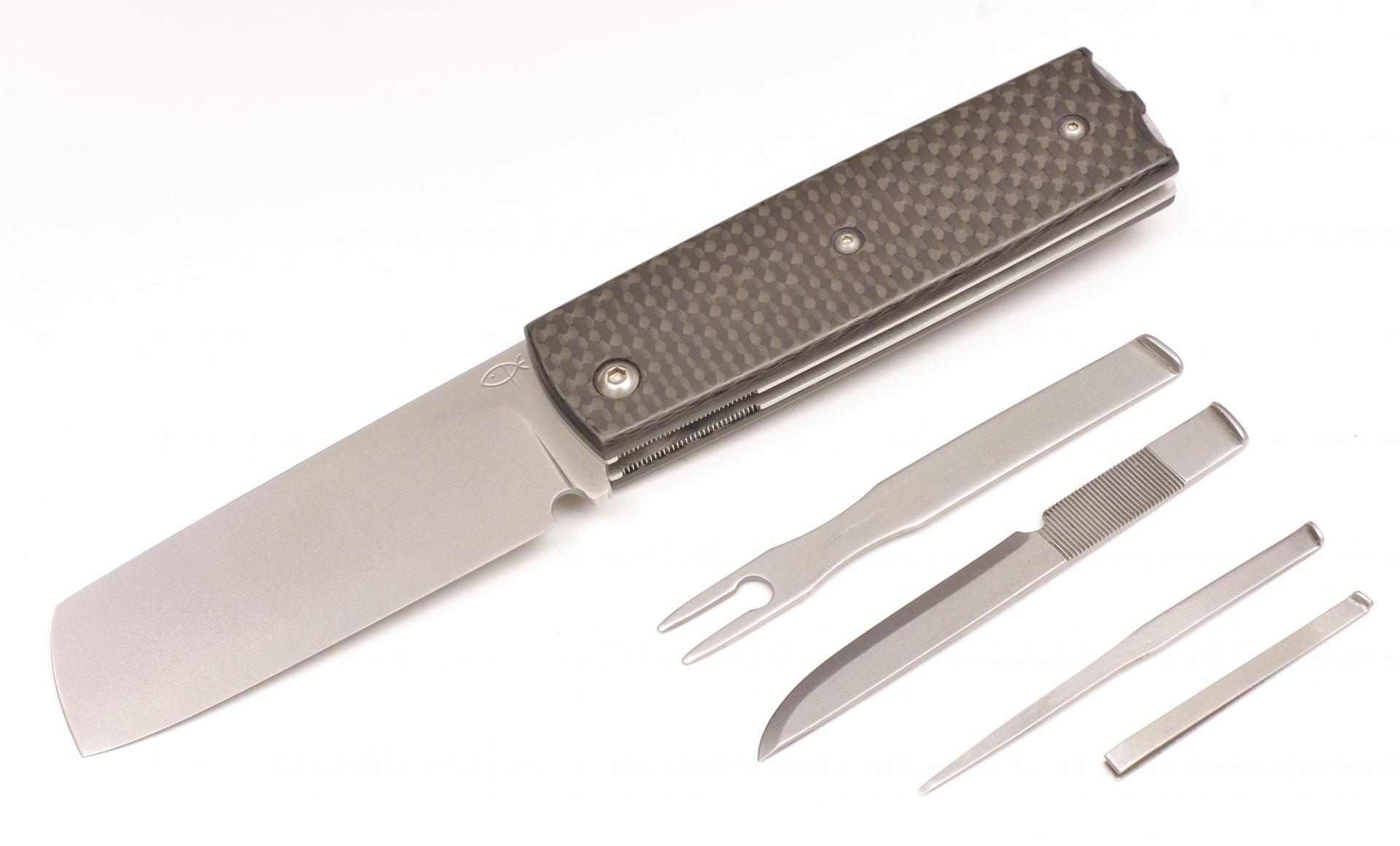 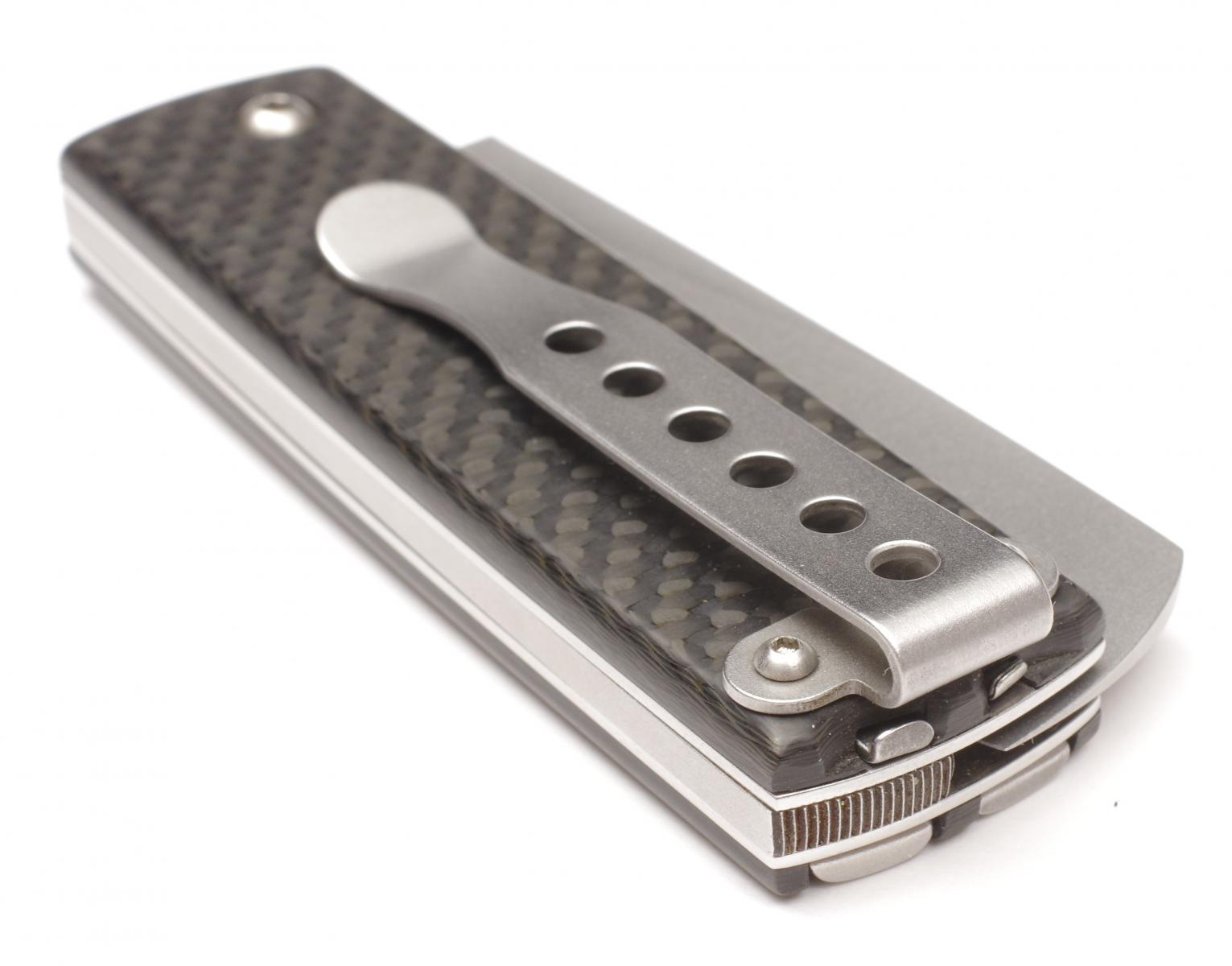 An experiment without a name. A multi-purpose knife with tweezers, toothpick, file, knife and fork. All these
parts are in the handle.
“Making knives is my profession, it’s how I live. It’s not a hobby, it’s real work. I’m very serious about it. I think I’m at my peak now but I’m getting older. There may be a need for glasses one day. I hope to stay at this skill level for as long as I can. But I’m still learning new things every day, especially from the mistakes I make. It’s when things start to go wrong that you discover new techniques or new solutions. It’s the only way to progress”. The pride in his work is exemplified by his simple guarantee: “I don’t want any of my knives that are being put on the market to be in a poor condition, so I correct them for free”. That also provides a continually high market value. “Some of my knives are more expensive second-hand than when they were new”.

‘Inzepocket’ is an appropriate name for this pocketknife. The blade is made of 14C28N, the handles are bog oak.
Our sponsors
Advertisements
Dit is een geprinte versie van de publicatie op