Belgian knife maker Claude Bouchonville (50) lives and works a stone’s throw from Gembloux, where the annual show of the Belgian Knife Society is held. 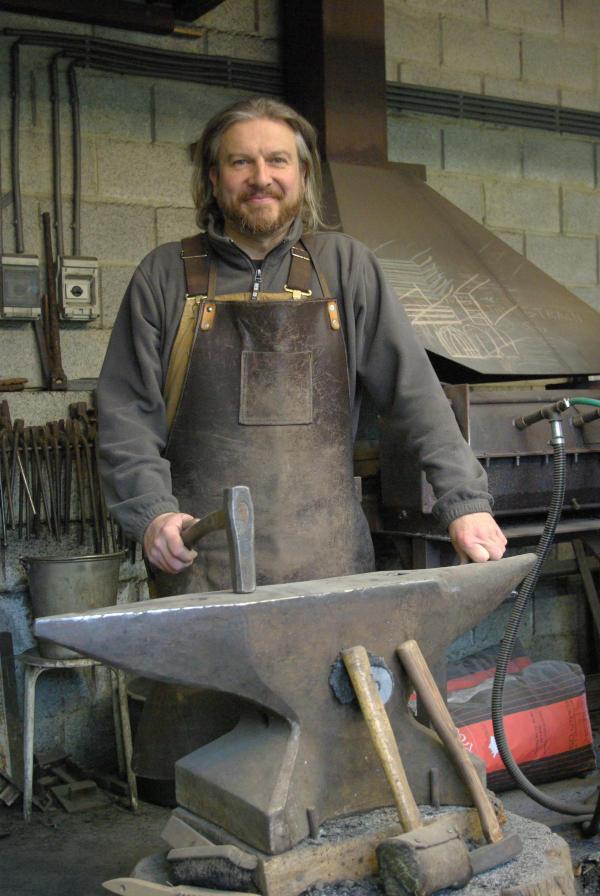 Claude Bouchonville in his workshop.

It’s only been four years since Claude Bouchonville made the final step in becoming a full-time knife maker. Wherein he could finally devote himself to his great passion: forging. It is the outcome of a somewhat whimsical career.
Claude was born on a farm in Wallonia, the French-speaking part of Belgium. He grew up with horses, and wanted to work with his hands. His obvious choice was to become a farrier, but that decision was not received with much enthusiasm at home.
“My father was against everything I wanted. I should study, but for me that was like prison. We warred about this for many years. One day I had to choose: stop or continue. I told my father: I am leaving school. Kill me if you want, but I will quit.”
Luckily, it did not come to that. In the end, Bouchonville senior learned to accept his son’s choice. At the age of 17, Claude went to the Ecole de Maréchalerie (Farrier’s school) in Brussels. The training took two years, but Claude wouldn’t leave. “I wanted to develop a specialisation. And if I stayed at school, I could postpone the moment I had to join the army, which I considered a waste of time.”
After he finished his education, Claude Bouchonville tried to establish himself as an independent farrier. That wasn’t easy. “I was 20, and my clients thought I was too young. They didn’t trust me. They thought I didn’t know what I was doing. But I graduated at the top of my class!” 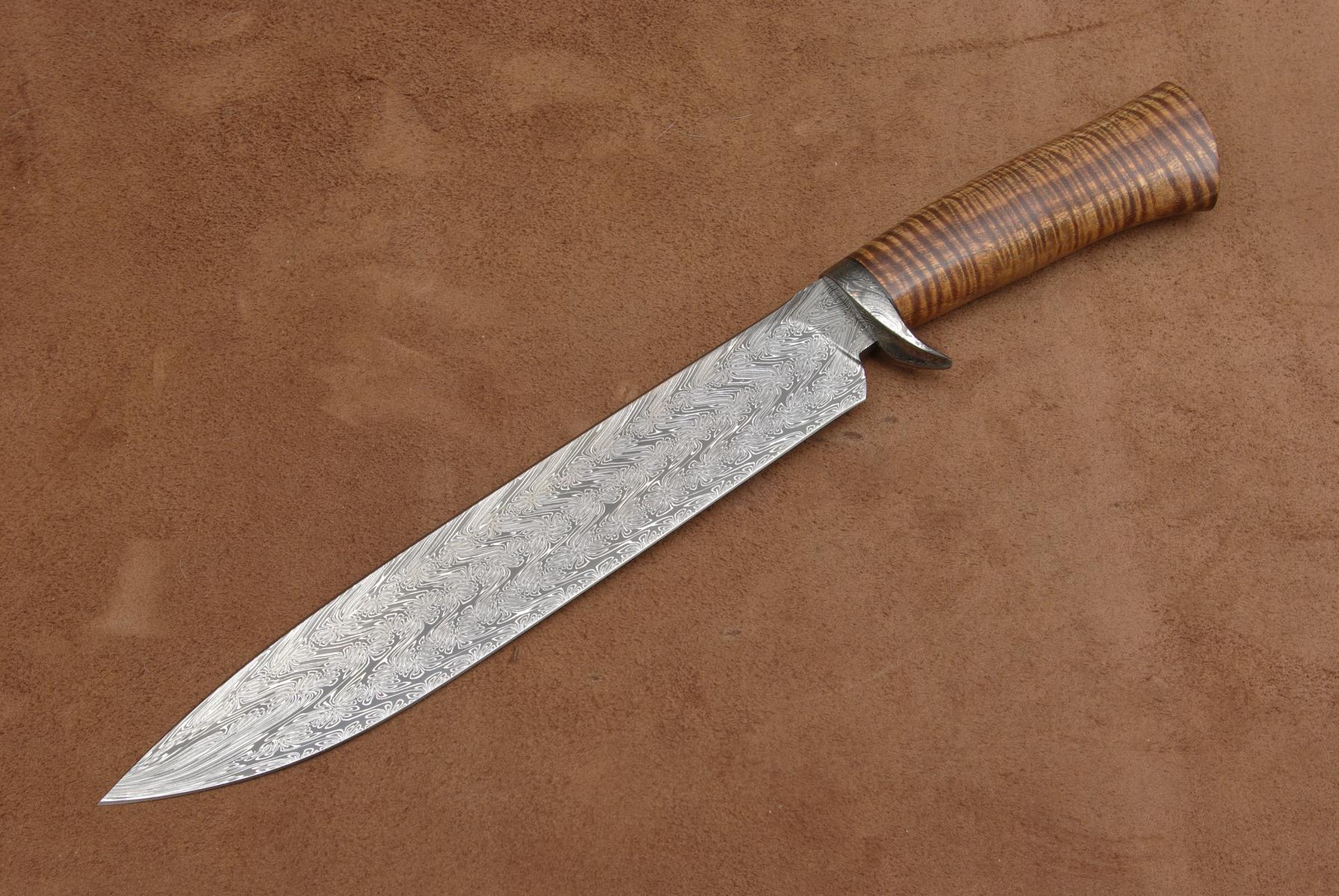 A large fixed blade with blade and guard made of mosaic torsion Damask and a handle of Koa wood.

Claude ended up at a metal construction company, specialising in doors and counters for banks. He worked there for 18 years, finally becoming a project manager. One day, the company was sold, the new owners being interested in nothing else than revenue streams. He saw matters going downhill and complained. His criticism was not received favourably. “I was one of the oldest employees, too critical, too troublesome. I was fired. All of a sudden I found myself with no salary, no car, no phone, no nothing.”
His next step was to work as an independent contractor. Building his own house taught him a lot. In the weekends he made knives. Finally, he made a giant leap; from 2014 onward, he only crafted knives. 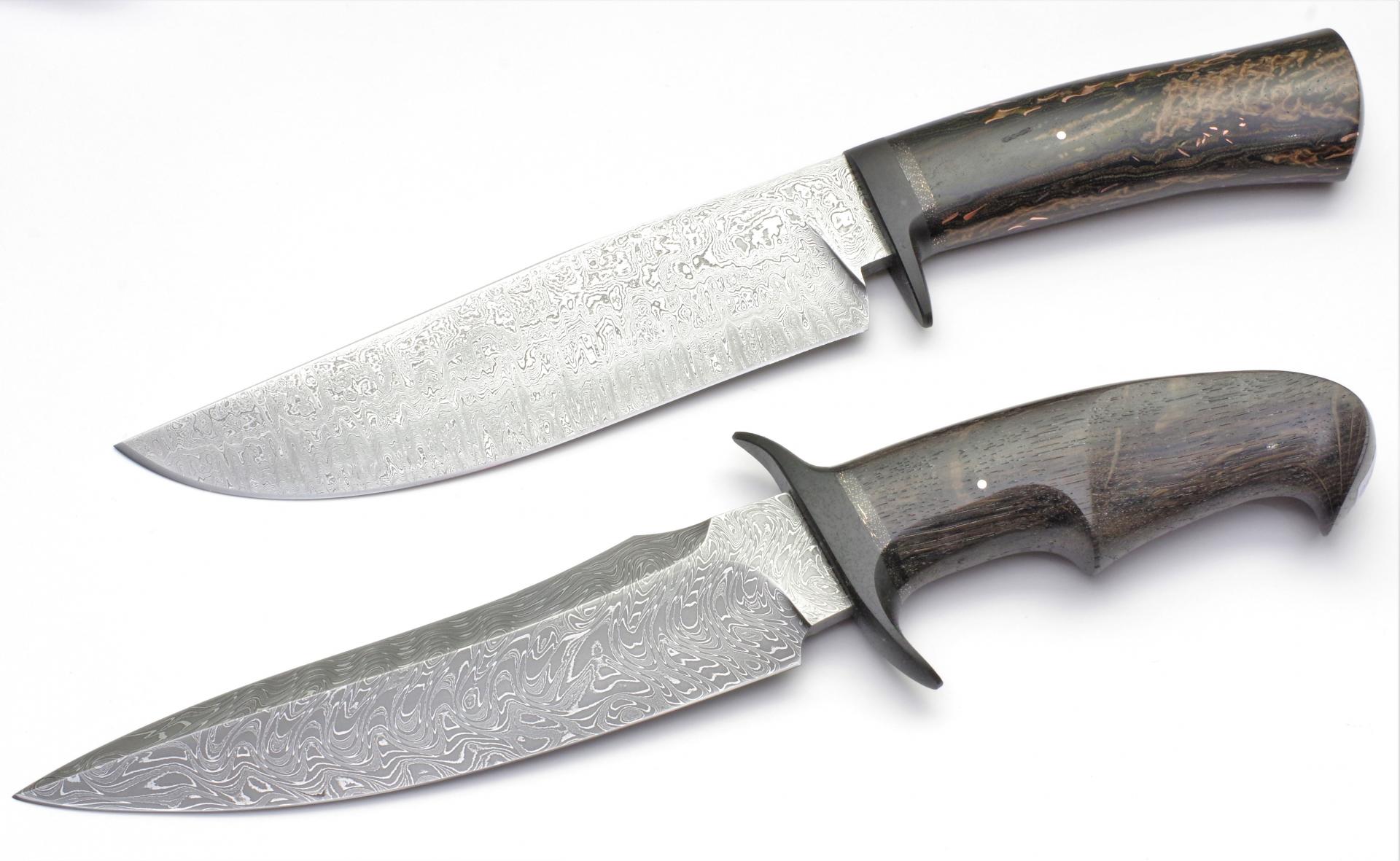 A camp knife (top) and Koltan. The camp knife has a 20 cm blade of Damascus and a custom Micarta
handle. The Koltan has a 17 cm Damascus blade and a handle of 2000-year-old Bog Oak. 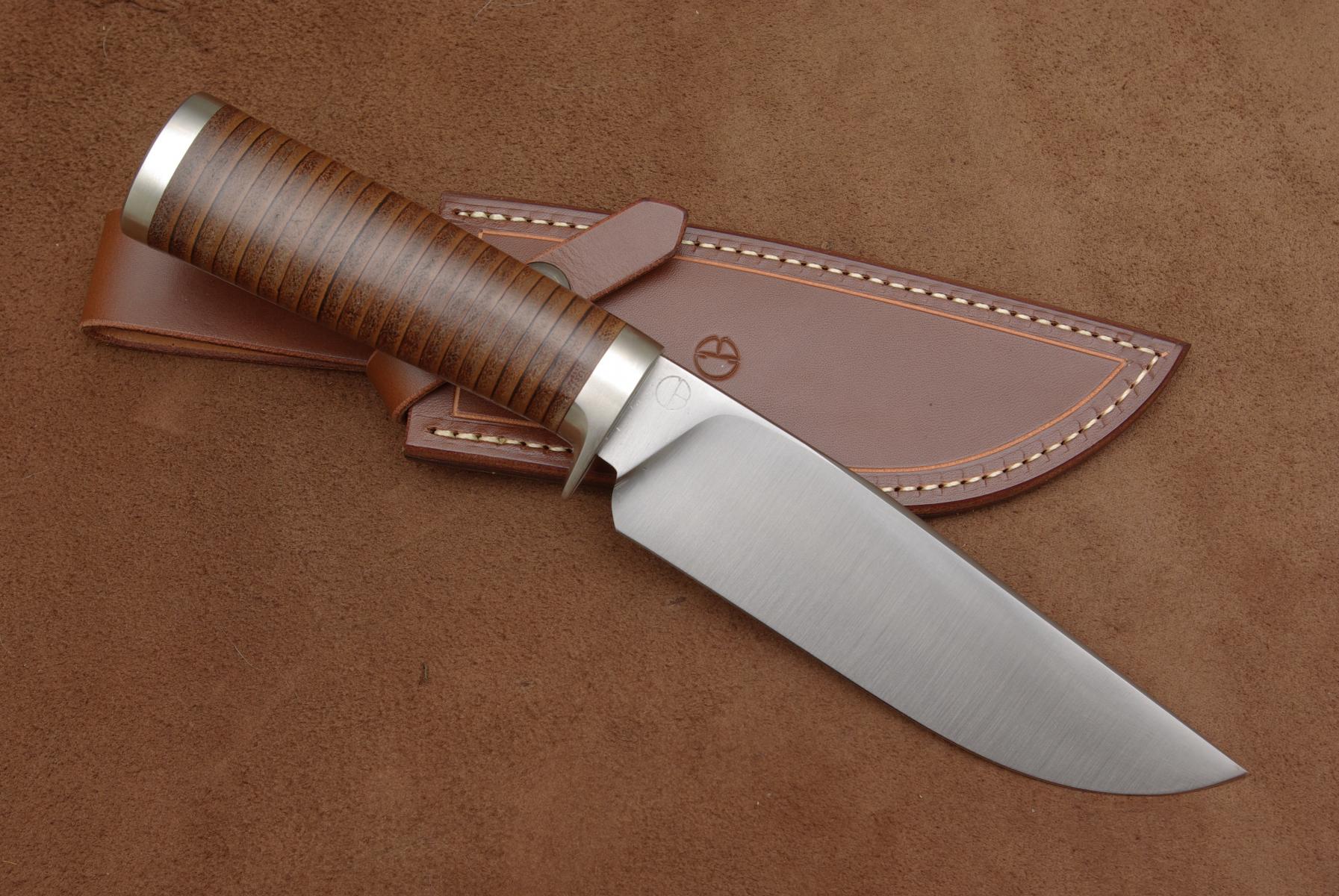 A beautiful hunting knife with a leather handle and 51cv4 steel blade.
Damascus
A passion for knives was something Claude grew up with. “I was always outdoors, always in nature, and always had a knife in my pocket”, he says. Judging by some of his scars, that didn’t always work out well.
Claude forged his first knife in the early 1990s. “I saw a French magazine with an article on Damascus blades. I’d studied those pictures endlessly; they’d been in my head for years. But at the time there was no Internet, I had no information and I just could not develop any further. Then I discovered the magazine Passion de Couteaux. Thanks to that magazine I began to understand. In 1999 was the first knife show in Gembloux and it all got started”.
Although he occasionally buys some, Claude forges most of his own (Damascus) steel. For him, forging is the most important aspect of being a knife maker. “Forging has always been my passion. It is like a virus, a disease. If you are contaminated, you just have to go on. I cannot do without”. In Claude’s case, it means that he keeps forging until the final shape of the knife is seen. 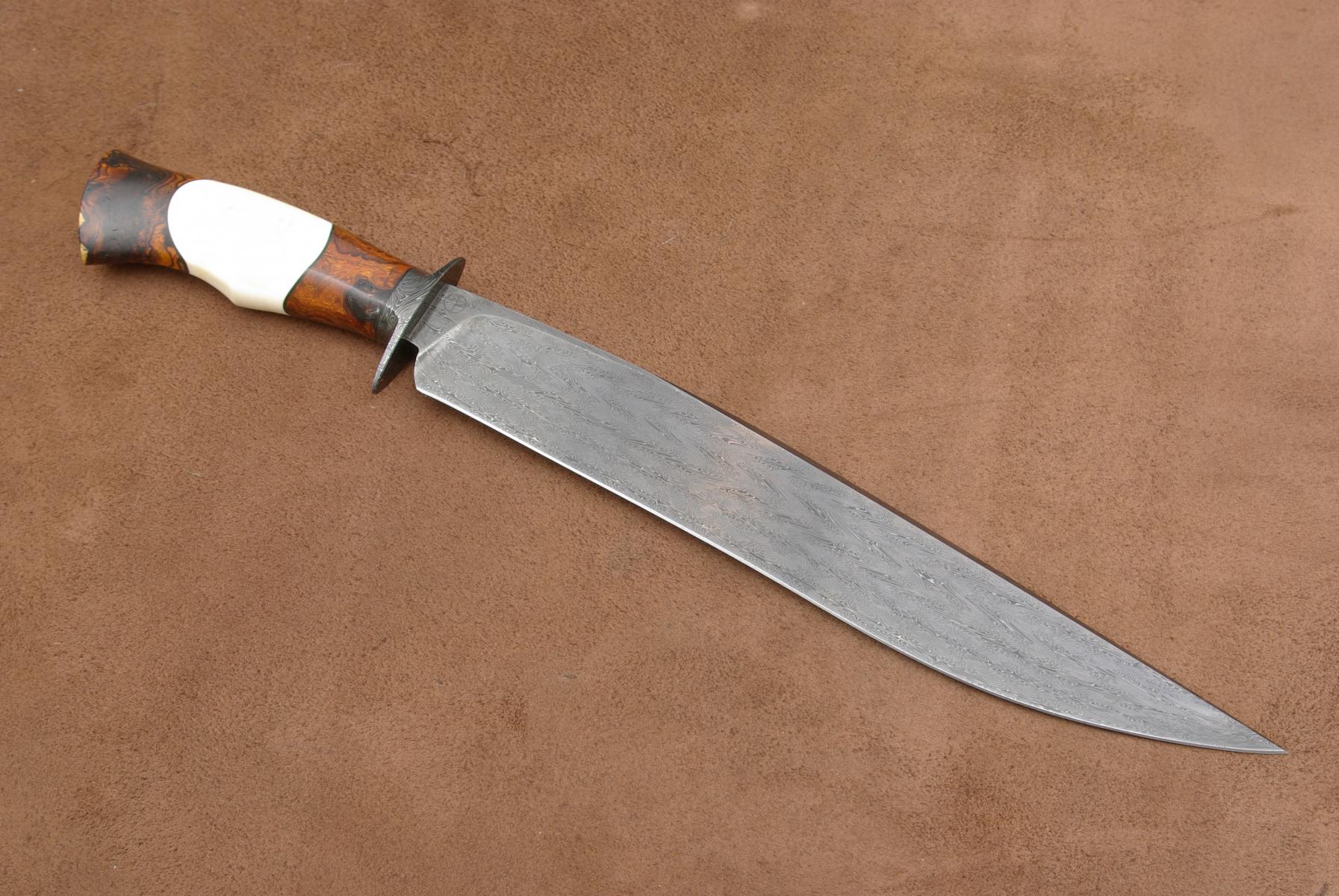 This knife has a blade and guard made of mosaic torsion Damask, and a handle of Ironwood and
walrus ivory.

Claude almost exclusively makes fixed blades. On occasion he makes a folding knife, but that is not his style. “It’s another craft, another subtlety”, he says. As far as fixed blades are concerned, he does not really have a preference. He makes Puukko’s, hunting knives, camp knives and bushcraft knives, all in freehand. “I never make drawings, ever. I imagine the knife I want to forge and then I make it according to the image in my head. It means I never make the same knife. They are all unique.” However, experience has taught him to make seemingly identical knives. He shows two forgings, with only the slightest difference. “That is because of my education”, Claude explains. “A farrier has to work with his eyes and his visual memory”. 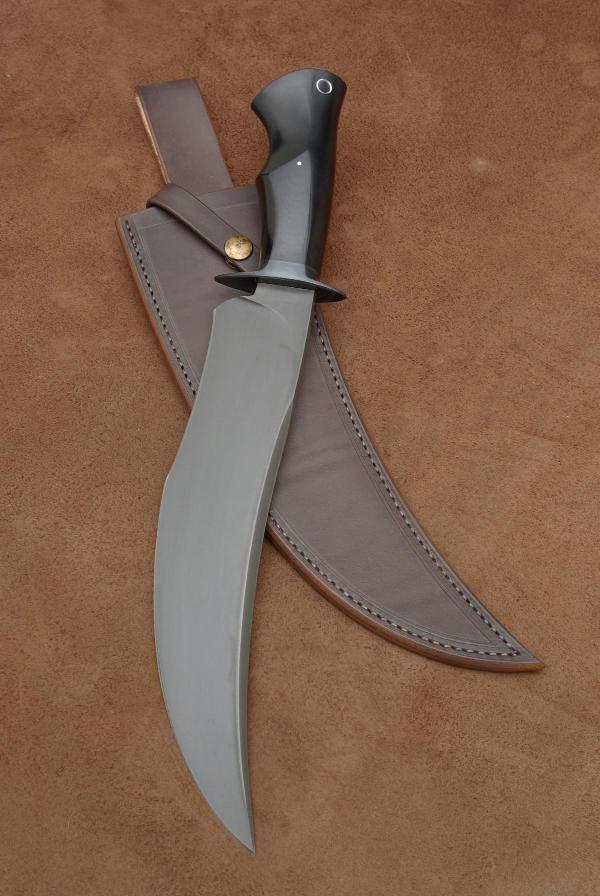 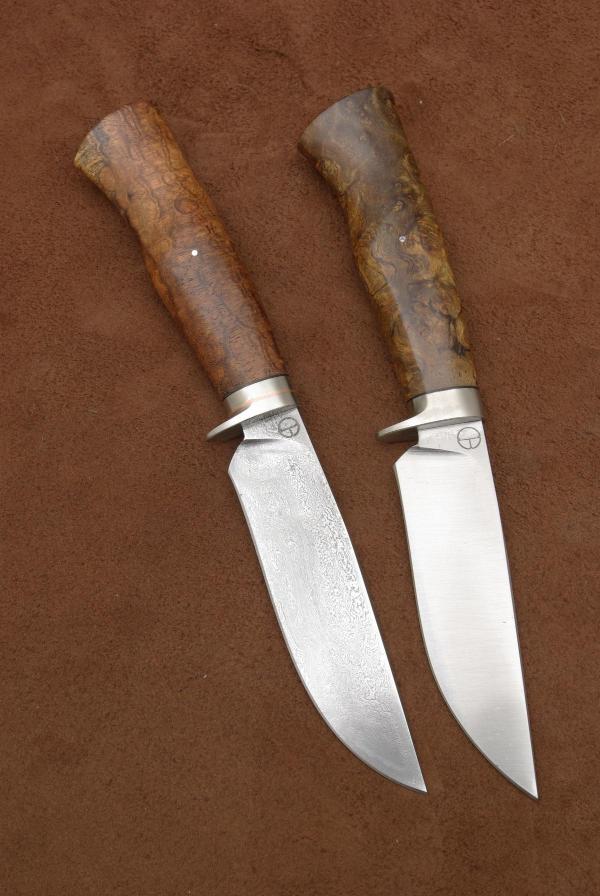 Left: A fighter with a 51cv4 blade, blackened with perchlorate, and a black Micarta handle.
Right: The left knife has a handle made of Afzelia Xylay wood, the right one is unknown.
His choice of handle materials depends on the quality and the pattern of the blade. Claude’s ‘brut de forge’ knives (in which part of the blade still shows the hammer marks) will get different handles than the finest Damascus. He also tries to adapt the colour of his leather sheaths to the colour of the handle. Claude Bouchonville prefers wood. He uses Koa and other Australian woods, but his favourite is Desert Ironwood. “With Ironwood you discover something new every time. If you buy a block it’s always a surprise. I have never been disappointed. It is like Damascus: the damask structure and the wood structure only show themselves in the final moments.” 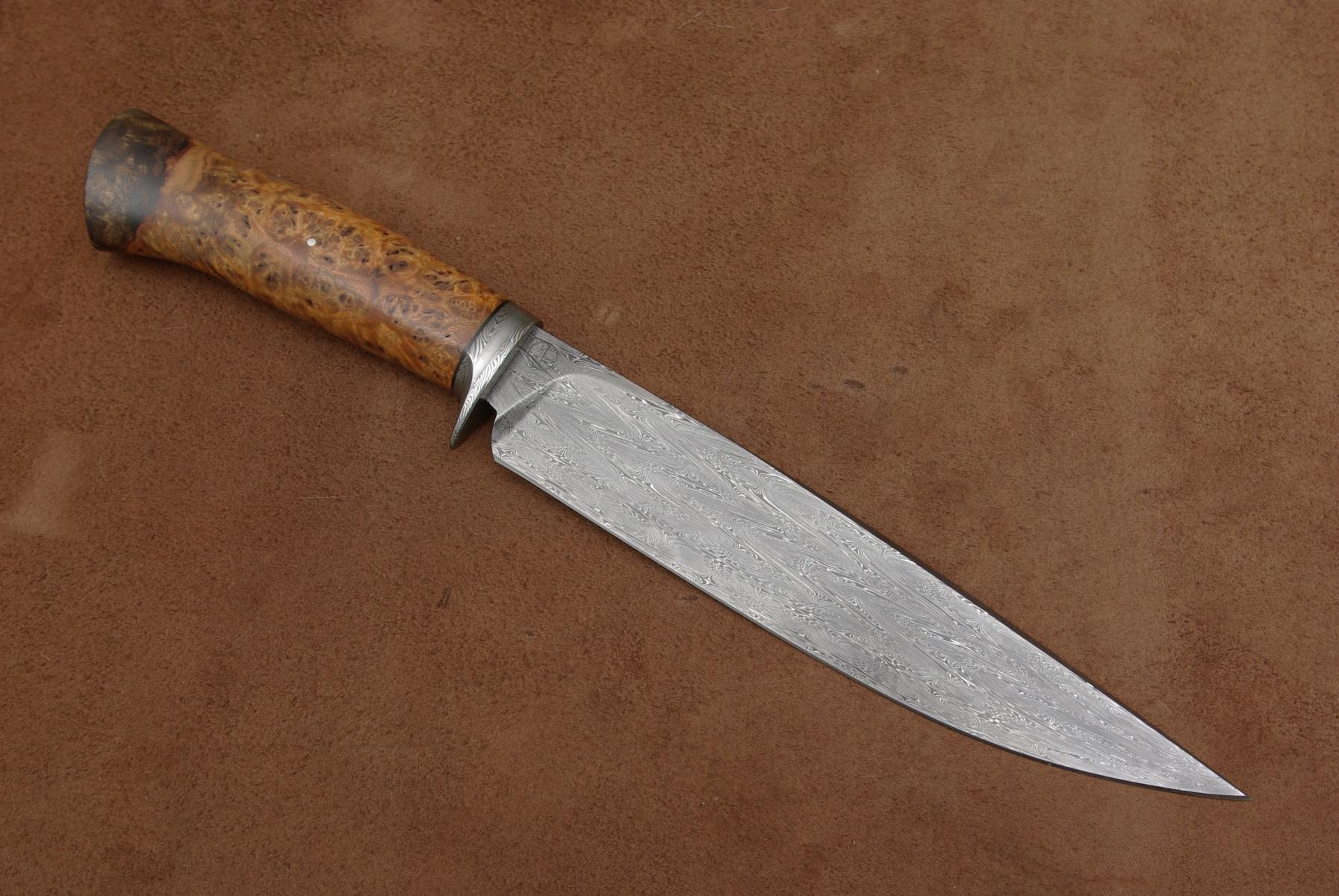 Anguish
Knife making is literally Claude’s passion. He calls it “douleur” (anguish). The moment when a Damascus blade comes out of the acid, showing its pattern, is always a climactic moment. “Sometimes the result is so spectacular … that it hurts to sell the knife”. The trade part is the one which Claude Bouchonville finds the most difficult. As an independent knife maker, the chimney needs to smoke. Claude makes an ever growing part of his knives on commission, but despite his skills there is always the uncertainty. “Collectors can be difficult. They can drop dead over a minute details”. Claude is always relieved when a deal is successfully closed. It means he can get back to his forge. 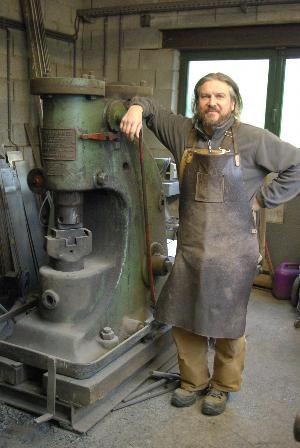 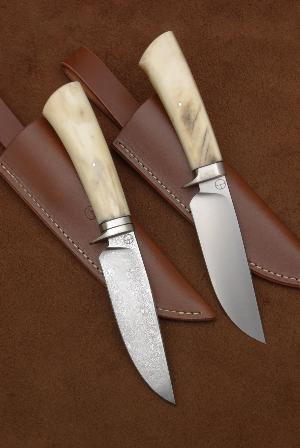