There are people who just like to make knives, there are people who are passionate about making knives and there is a ‘hors catégorie’: those for whom knife making is a physical necessity, an inner urge, almost an obsession. Alessio Salsi (53) is such a man. He combines a staggering diversity of ideas with a mastery of almost any material – a true knife making Renaissance man.

Alessio (Alex) Salsi was born and raised in Belgium, a child born to emigrated Italian parents. He started making knives some 17 years ago and since then has worked in an amazing variety of styles, using almost every conceivable material.
Salsi talks about himself as an artisan, a craftsman. But he can just as easily be described as an artist. His knives are colourful, diverse, exuberant, surprising and exciting. You really never know what he will come up with next. His portfolio is impressive. There is hardly any type of blade he has not made, or experimented with. Bowie knives, daggers, fighters, swords, axes, spears, arrows, frame-lock folding knives, liner-locks, back-locks – you name it, he has made it. Including, in most cases the hand-stitched leather sheaths. It’s the actual creation that counts for him, once a knife is finished he loses interest. 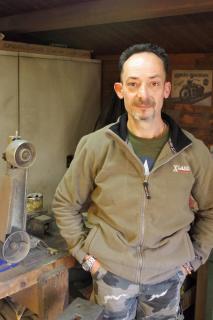 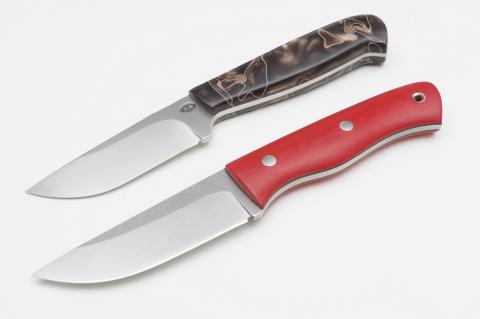 Left: Alessio Salsi.
Right: Most of Alessio’s blades are forged. These are two rare examples of stock removal.The upper knife
has a RWL34 blade and acrylic handle, the lower one has a selectively hardened blade from115W8 steel
and a red G10 handle with steel pins.
In the last few years he has calmed down a bit. In Alessio’s world, that means that he has tried to stop putting 100 ideas into one knife, or making a few dozen different styles of knives at the same time. He’s stopped making folding knives (although he assures me he will get back to that in the near future). At present, he concentrates on hamons, the lines on differentially hardened blades, or Puukkos. “The Puukko is a knife with a heart and a soul”, Alessio says. “I love to make them”. 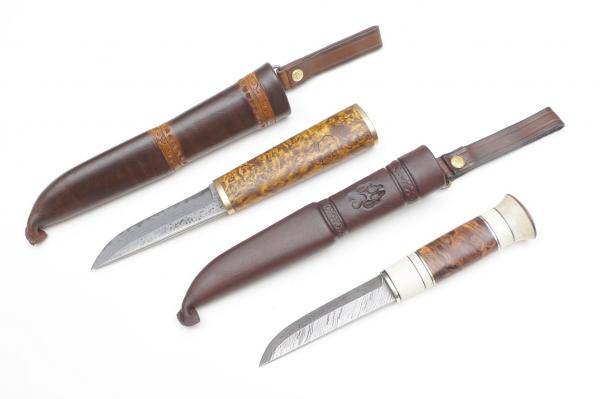 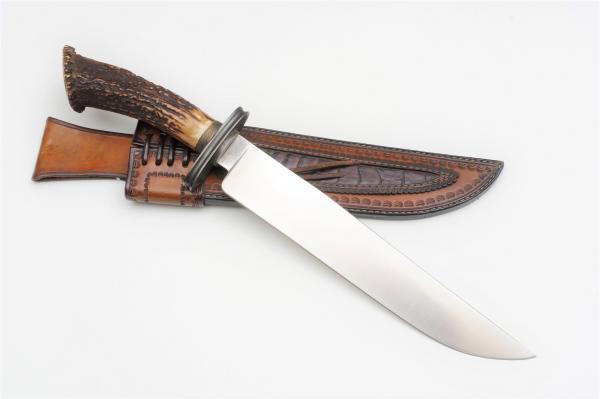 This knife has a blade from Niolox, guard from O2 and handle from Sambar. The sheath is a combination of tanned leather and Ostrich leg.
Alessio Salsi is a strong supporter of handiwork. A ‘handmade’ knife, in his opinion, should be truly handmade. “You need a few machines, of course. A belt grinder, a vertical drilling machine. But that’s all. Real craftsmanship lies in handiwork, not in pressing buttons”. Apart from that, a knife in Alessio’s view should be perfect. He regularly tests his blades by chopping stag, Azobe wood, or even his bench-vice. If the blade gets damaged he makes a new one.
This drive for perfection does not make life any easier, Alessio admits. But he does not allow himself to cut corners. Everything must be right. “Take a liner-lock”, he says. “If you open the knife, the blade is kept in place by the tension of the spring. In many knives, if you push the lock to the side, the blade has some play. That is a construction fault. Another thing is the location of the tip. If the knife is folded, the blade tip should be exactly centred between the liners. Doing this properly by hand requires a lot of time.”
Alessio started making knives in 1999. He had always loved knives, but some way or another had never done anything with that interest. By chance, he stumbled across a Dutch-language knife encyclopaedia, which included names and addresses of knifemakers. The one closest to him was the Dutch knifemaker Gert van den Elsen.
Without Alessio’s knowledge, his girlfriend wrote a letter (we’re still talking 1990’s) to Van den Elsen, asking if Alessio could come over to have a look, as a birthday present. He could, and so Alessio came, saw, and no – not immediately conquered, but returned home with a beautiful knife from Gert van den Elsen and a piece of Damascus steel. “I held that piece of steel in my hands for about a month, until my girlfriend said: ‘either you make something out of it, or I’ll throw it away’. I then made a dagger”.
That first knife was the precursor to many more. Initially, these were only fixed blades, but in 2002 Alessio met the South African knifemaker André E. Thorburn, at the German knifemakers guild’s annual show in Solingen. Alessio was impressed by his knives and asked him if they were hard to make. According to Thorburn, it wasn’t too difficult. “His advice was simple: Go to the shop, by a cheap folding knife, take it apart, see how it’s made and then do it yourself. The next year I had finished two or three pieces. I showed them to André Thorburn, and he thought I had picked it up rapidly.” 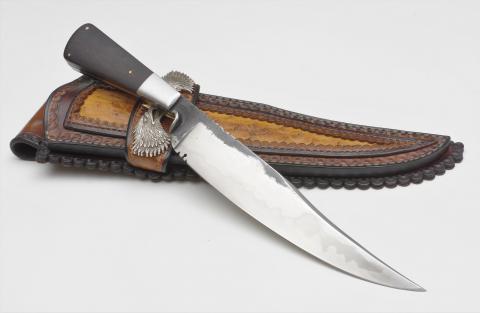 Left: Alessio likes to experiment with old files, such as in this knife. The blade is from an old Nicholson file,
clay-hardened, with a Damask bolster and ebony handle. The sheath is a combination of tanned leather and
Ostrich leg.
Right: Guard and pommel of this knife are made from parts of an aluminium and bronze German U-Boot propeller.
The blade is made of O2 steel, and the grip is leather.
By the same method Alessio taught himself to forge, engrave, and treat and stitch leather. The only thing he does not do is forge Damascus. Without a mechanical hammer that would take him days. Alessio mostly get his Damascus as a pre-welded bar from Achim Wirtz and Peter John Stienen, and then hand-forges it to the desired shape and size.
His role models are the Americans: Barry Davis and James Schmidt. Alessio also is a fan of David Winkler, an American knifemaker who specializes in knives from the U.S. colonial era. “I share that passion”, Alessio says, “but unfortunately those types knives are not very popular in Europe, so I cannot sell them.”
Alessio prefers natural materials: Desert Wood, Snake Wood, stag, mammoth and walrus ivories. Most of his blades are made of Damascus, but he basically works with anything he can get his hands on: Niolox, San-Mai or RWL34, and he loves to experiment with old files as well. But, as per his nature, this might all change tomorrow – Alessio Salsi will no doubt continue to surprise us. 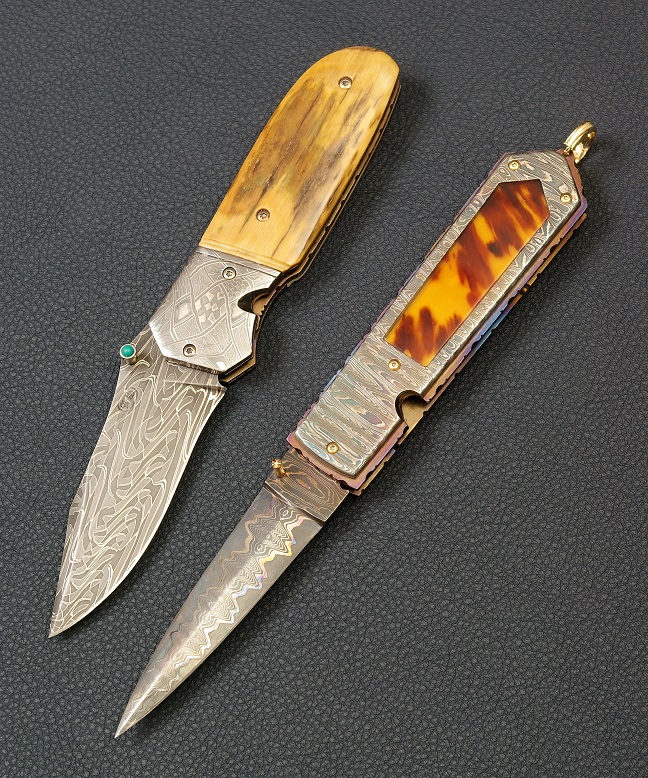 These folding knives were made about seven years ago, showing Alessio’ s exuberant style. In the last few years he has calmed down a bit.
Our sponsors
Advertisements
Dit is een geprinte versie van de publicatie op