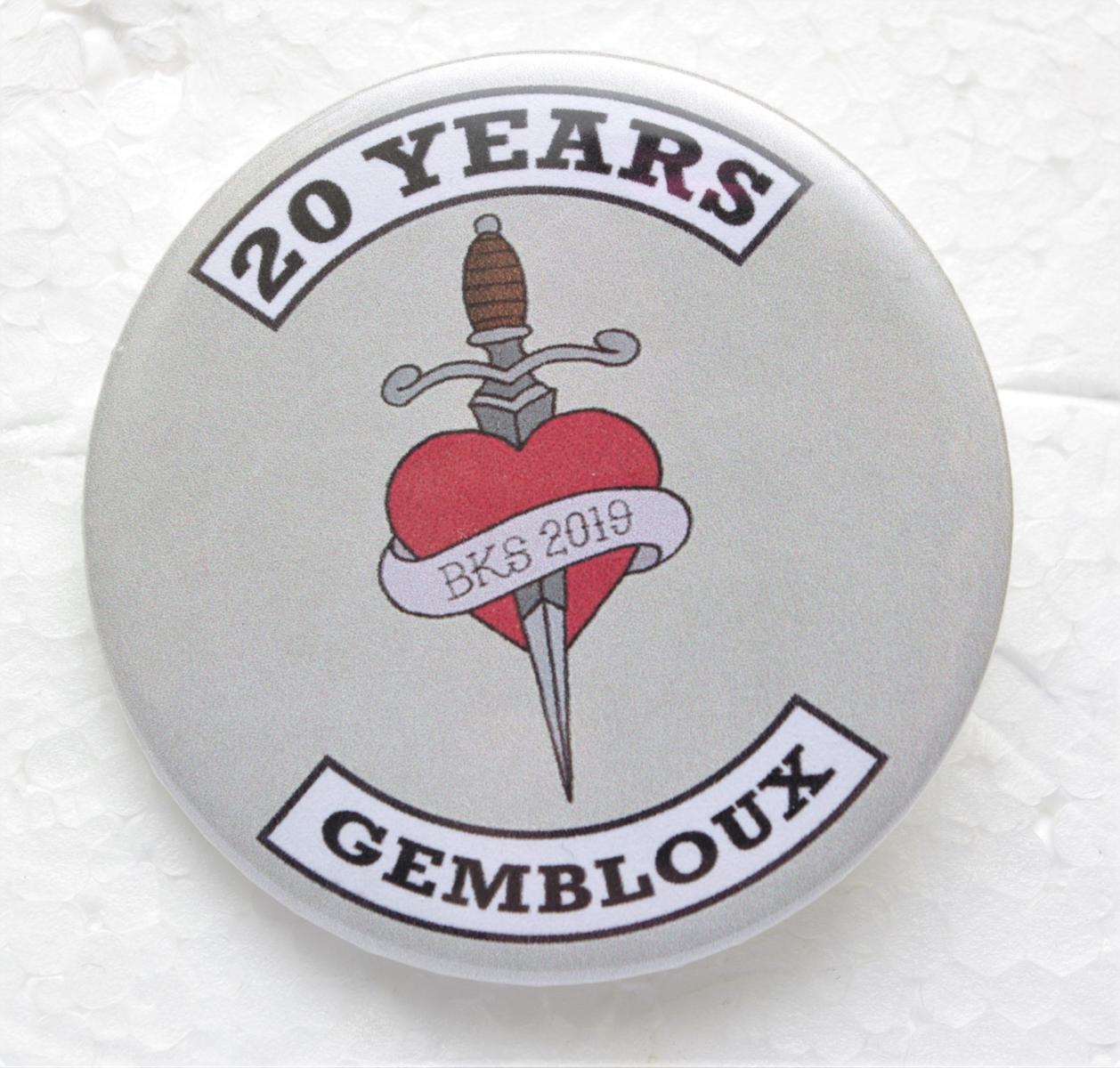 With its 20th edition in Gembloux, 176 exhibitioners and around 2200 visitors, the knife making days of the Belgian Knife Society proved themselves again to be one of the major European knife shows.

A part of the main exhibition hall at the Gembloux knife show.

The annual knife making days of the Belgian Knife Society celebrated their 20th edition in Gembloux on November 9 and 10, this year. The show was crowded, as usual, with a very lively atmosphere. The BKS was happy to meet quite a few newcomers, including two apprentices from Finnish master Pekka Tuominen, Lenni Jäntti and Riku Matilainen, both 15-year old. Their Puukko’s are shown further on.
‘Gembloux’ has become a valued tradition, made possible through partnerships between the BKS and the City of Gembloux, the local tourist service and the ‘Confreries des chevaliers de la coutellerie de Gembloux’. And, of course, the work of many volunteers. The offerings are diverse, including a broad range of knife making materials, and the quality of the workmanship is generally high.
All that does not mean that there is nothing left to be desired. According to BKS-president Tim Wagendorp, the organisation has a few spear points: still more variation, if possible somewhat less but higher quality exhibitioners, contribution to and exchange with other knife shows, exchange of knowledge, and a continued focus on accessibility. The BKS wants it show to be attractive for everyone interested in knives.

The ‘Tableau de la troupe’: organisers, jury and most of the award winners of the 20th edition of the BKS
knife show in Gembloux.
As usual, there were a few prizes. These were awarded as follows:
Best of show: Tönu Arrak
Best switch blade: Jean Baptiste Lévêque
Best straight knife : Cuccurullo custom knivesBest straight knife: Cuccurullo Custom Knives
Rene Bol Award for newcomers: Lenni & Riku
Three Rene Bol Awards for the promotion of the cutlery handicraft, the fraternity and the cutlery history: Pekka Tuominen, Pavel Rihacek (maker of traditional Japanese blades) and Pierre Nederlandt (author of the book ‘La Coutellerie en Belgique’ on Belgian knife makers).
The date for next year’s show has already been set: November 7 and 8, 2020, at the Foyer Communal, Place A. Lacroix in Gembloux - as usual.

Although Dutch knife maker Aad van Rijswijk is mainly known for his classical folders, he also likes to
experiment with high-tech materials, with equally pleasing results. This frame lock folding knife has an
ATS 34 blade and blue anodized Titanium handle.

The knife from the cover: a ‘Fighter’ by Alessio Salsi with a C-10S blade with a beautiful Hamon, a carbon
steel guard and an Ebony handle. 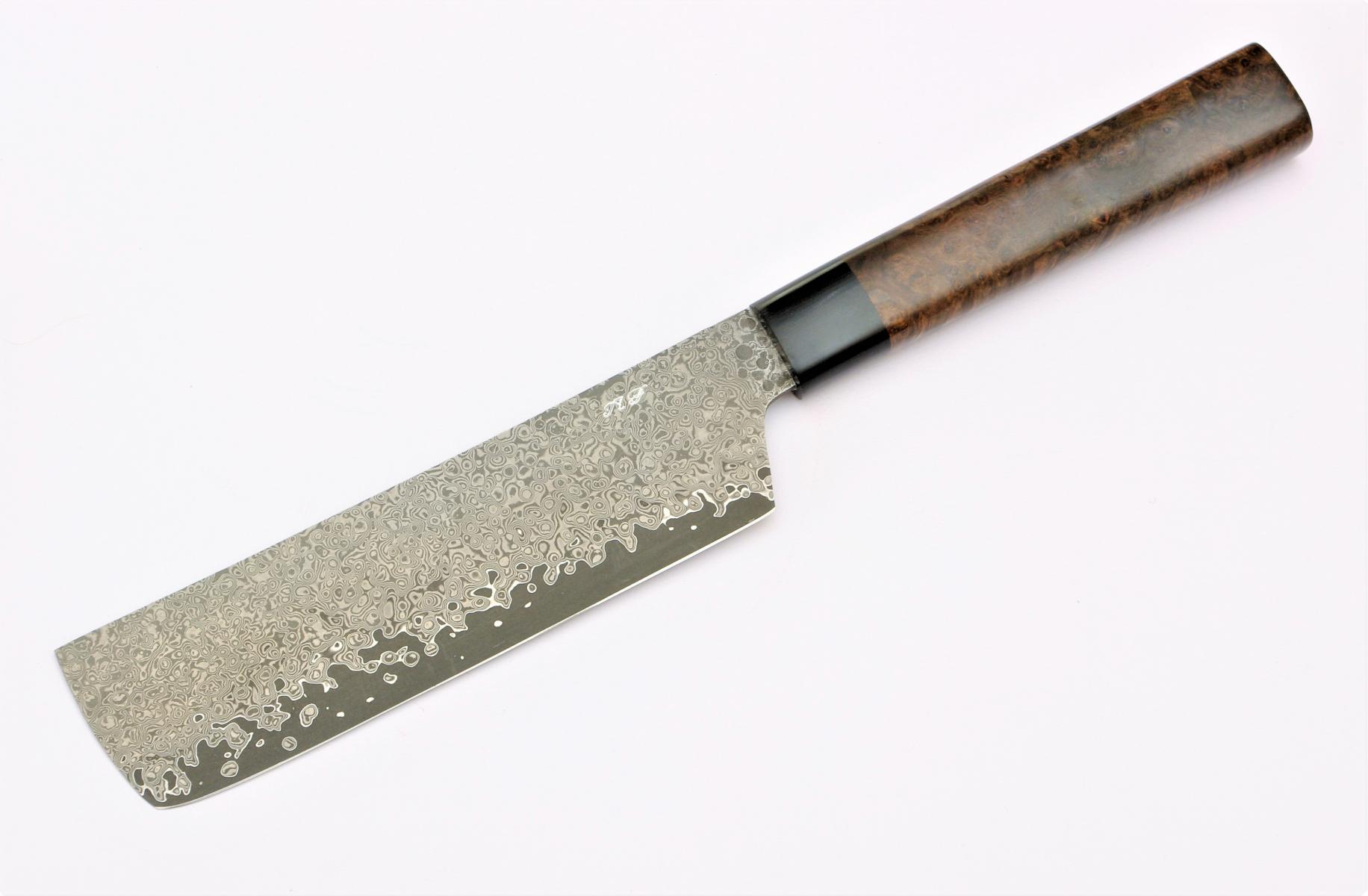 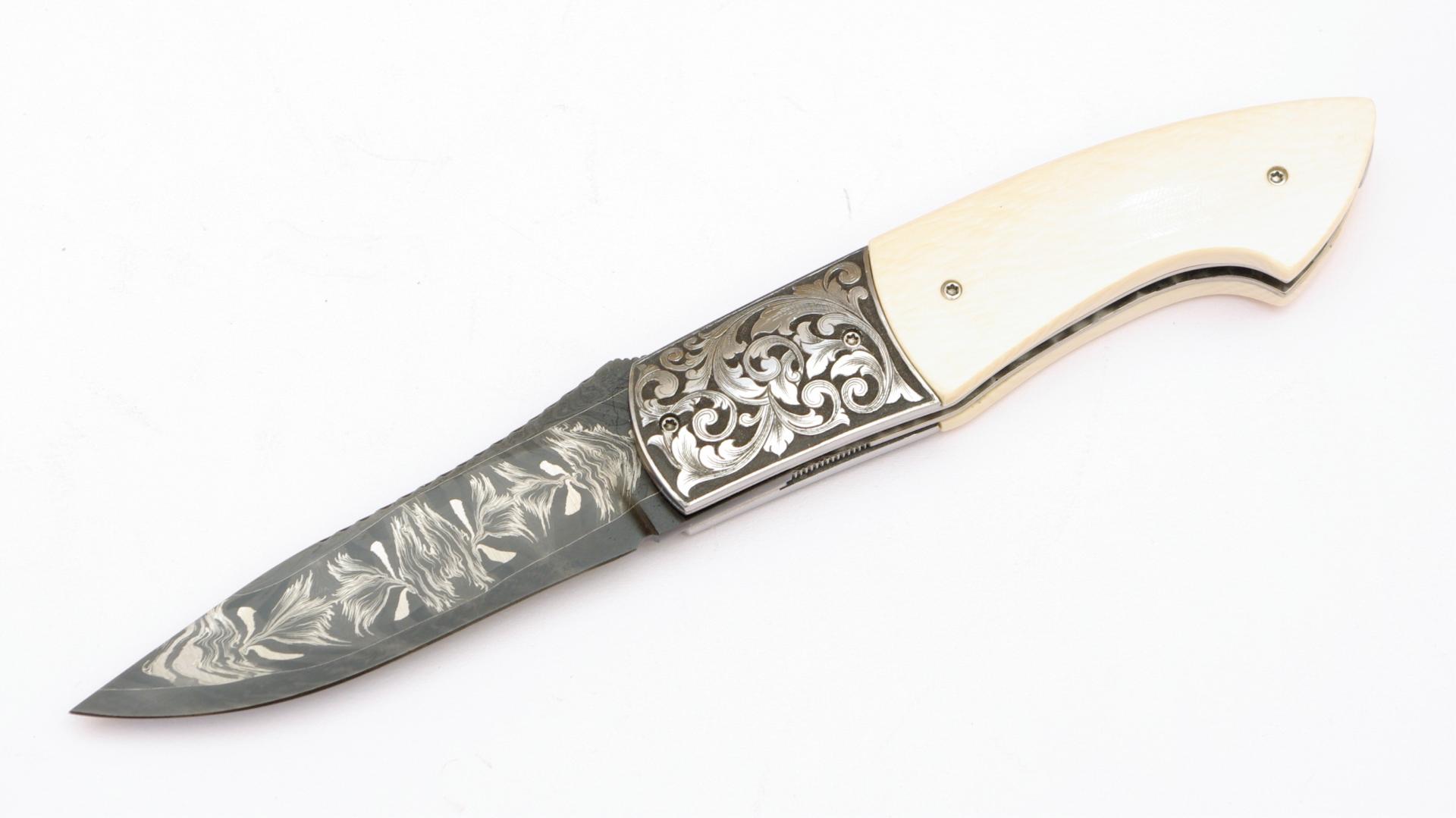 The ‘Longimano’, a liner lock folding knife by Italian maker Carlo Cavedon (Cavedonart). The blade is Damask
by Vlad Matveev, the handle material is antique ivory. The bolsters are hand engraved. The overall length
of the knife is ca. 20 cm. 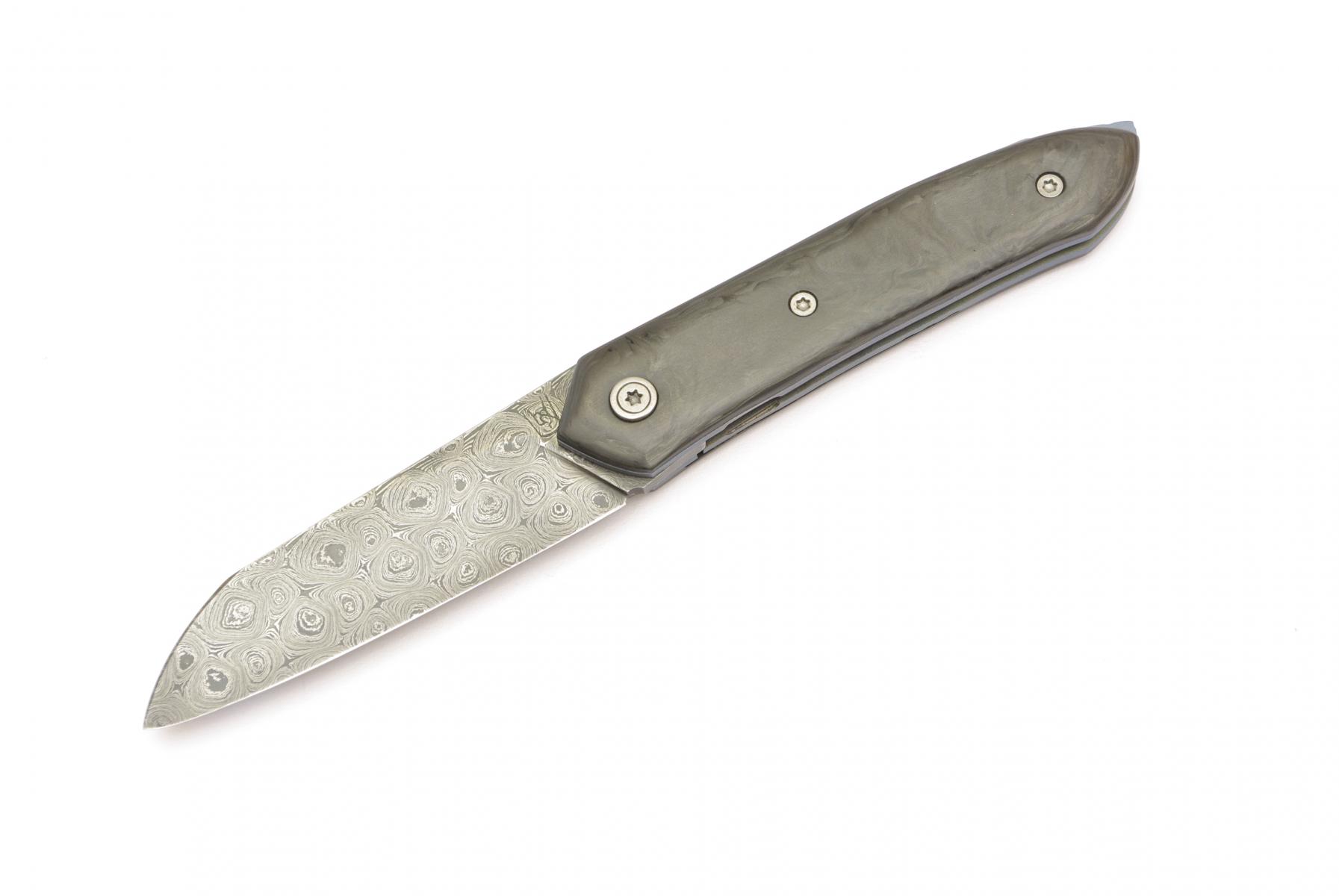 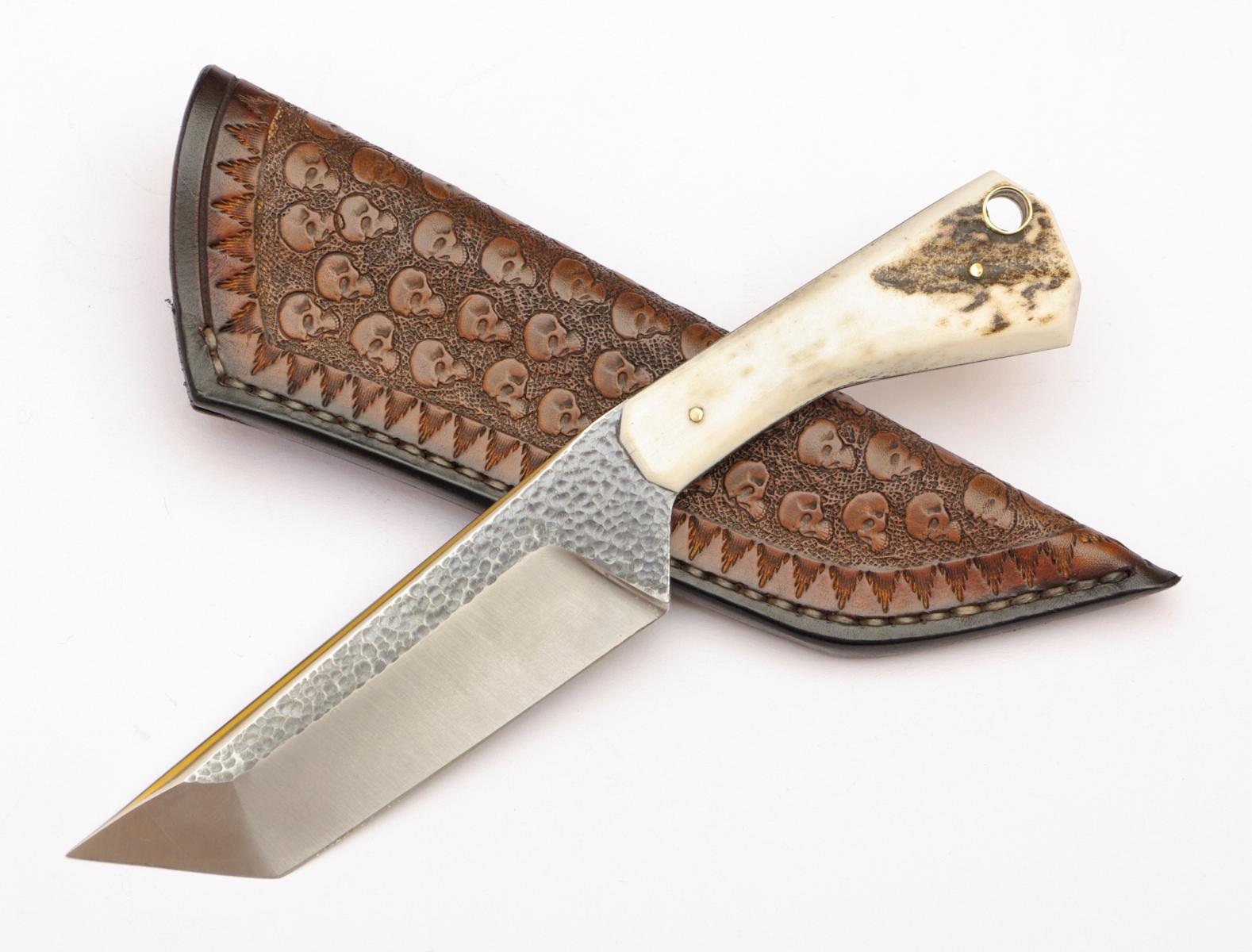 The design of this ‘Street Necker’ was made by Christophe Verstappen. The knife was made by Guillaume
Antonucci from N690C steel and Deer Antler handle material. The sheath was made by Alessio Salsi.

‘Ursa Major’, or Big Bear is the name of this impressive knife by Belgian maker Claude Bouchonville. The
17 cm blade is from O2/15N20 Damask, the handle is Desert Ironwood. 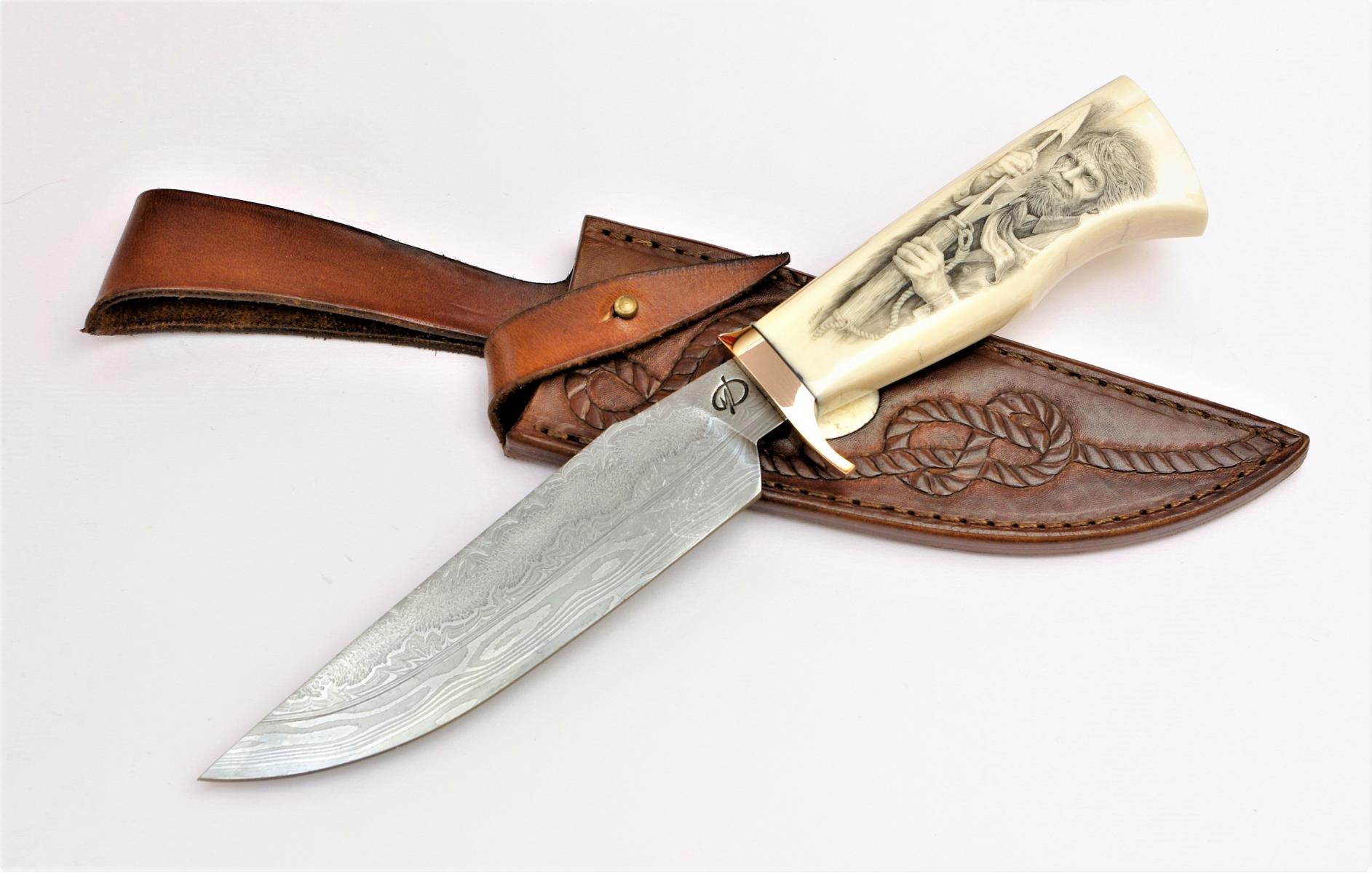 The ‘Achab’ (after the captain in Moby Dick) from Italian knife maker Denis Mura. The knife has a 16 cm
blade from Fucina Fogonero Damask, and a handle from Walrus tusk with scrimshaw by Francesco Salvadori.
The sheath is by Kiara. 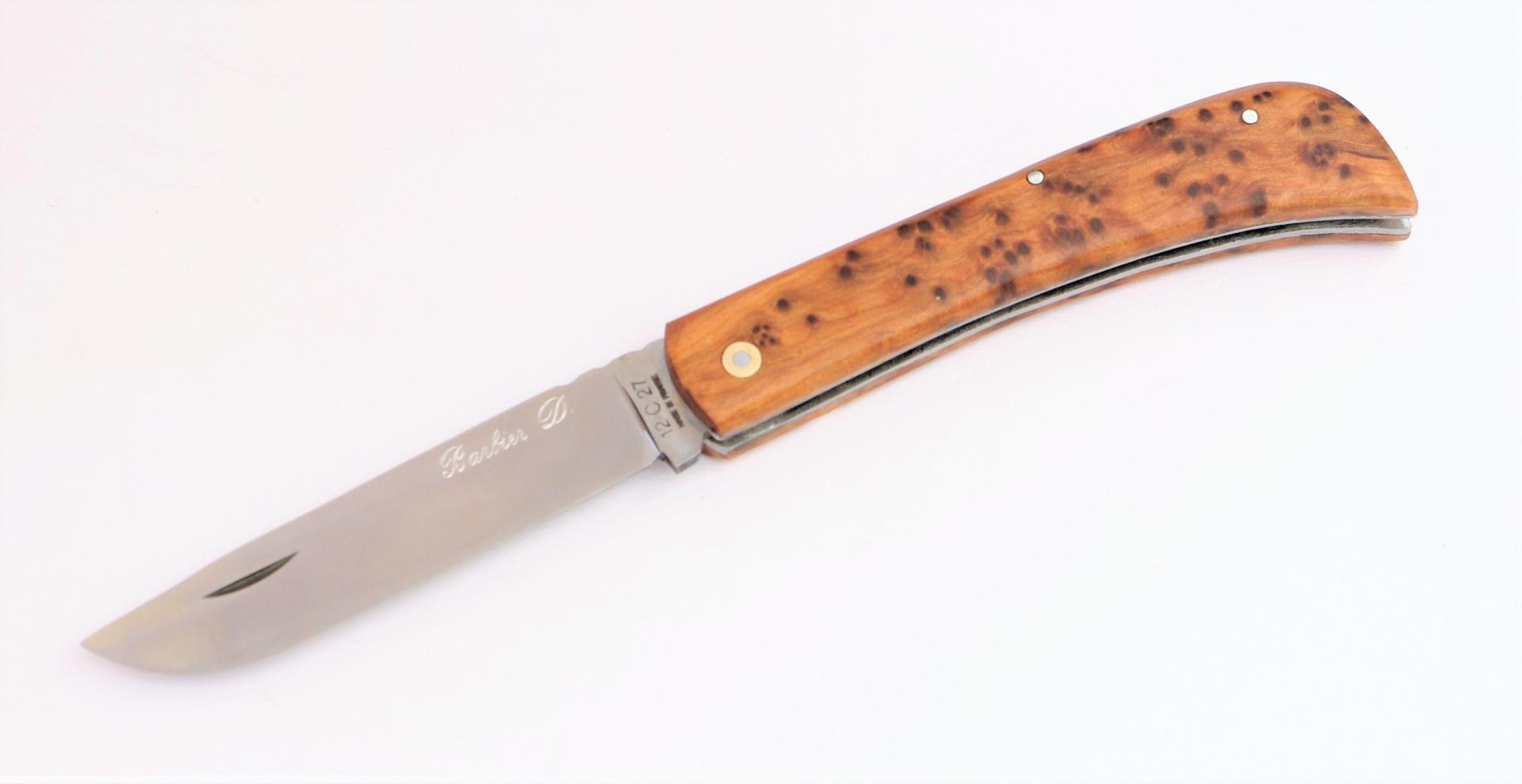 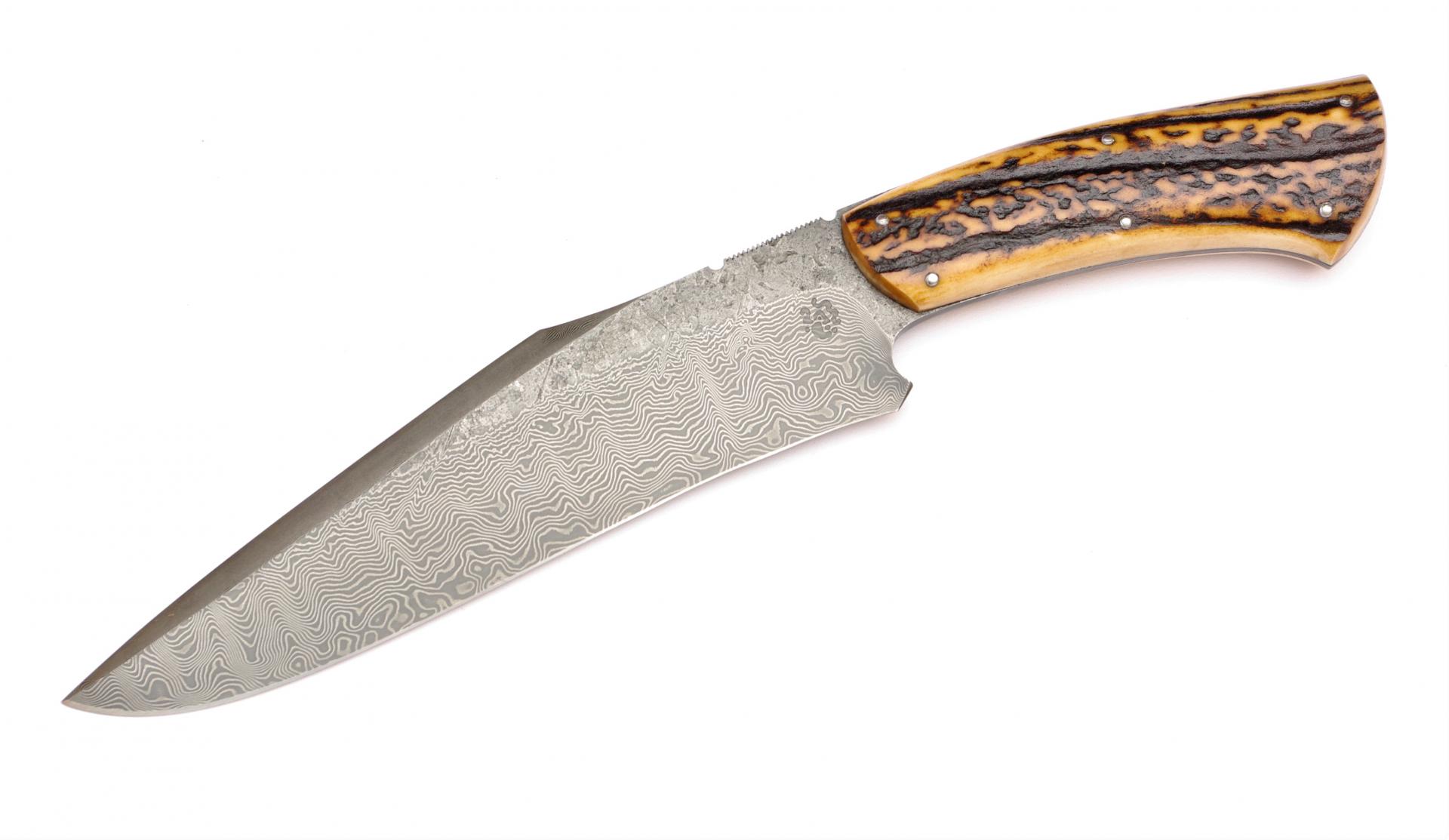 A fixed blade by Belgian knife maker Fabrice Delbart (Forge Celtique). The steel is 15N20 / 90MCV8 Damask, the handle is Deer antler. The overall length of the knife is 365 mm. 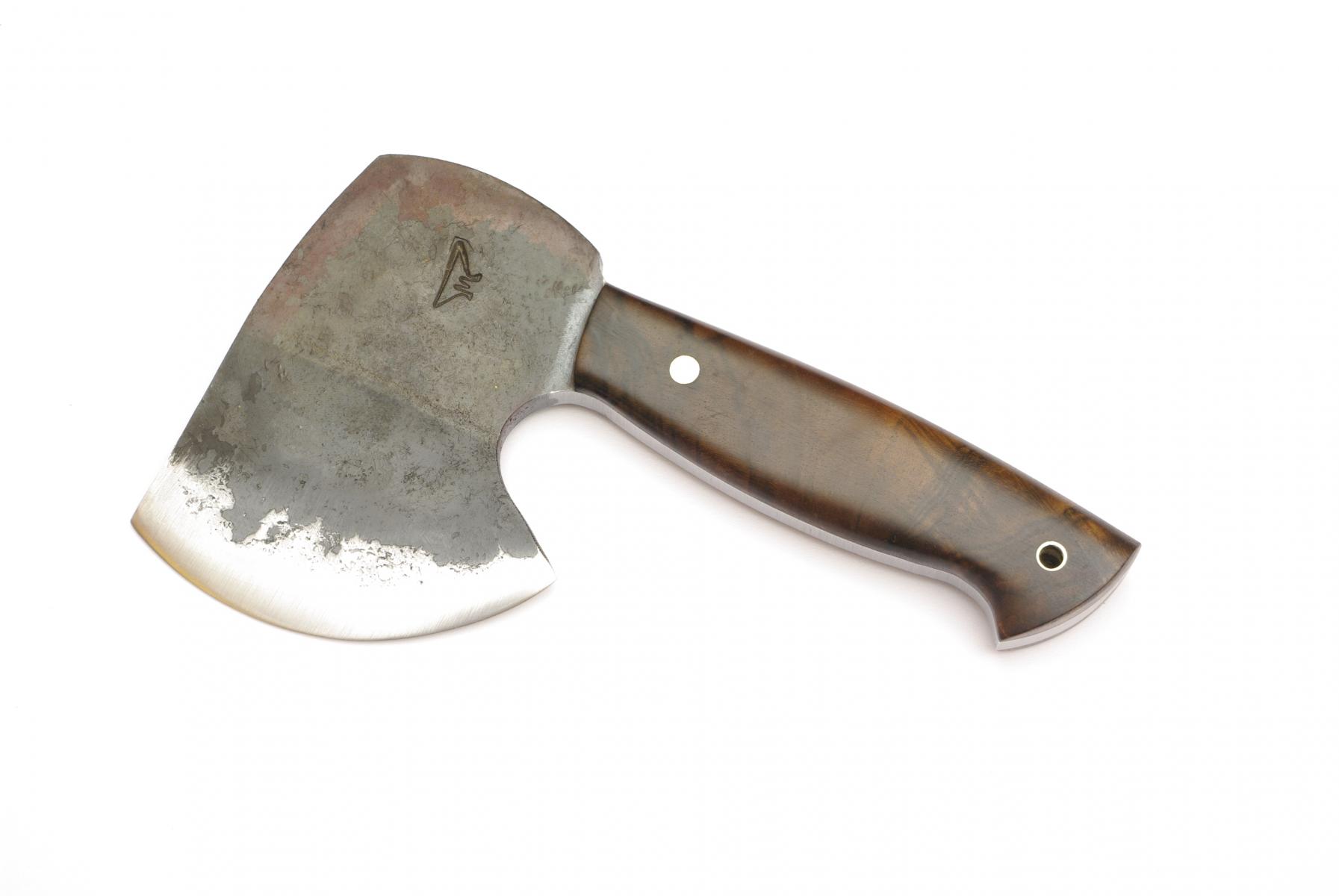 A small hatchet by French maker Frédéric Marchand. The steel is XC75, the handle is 300 years old walnut. 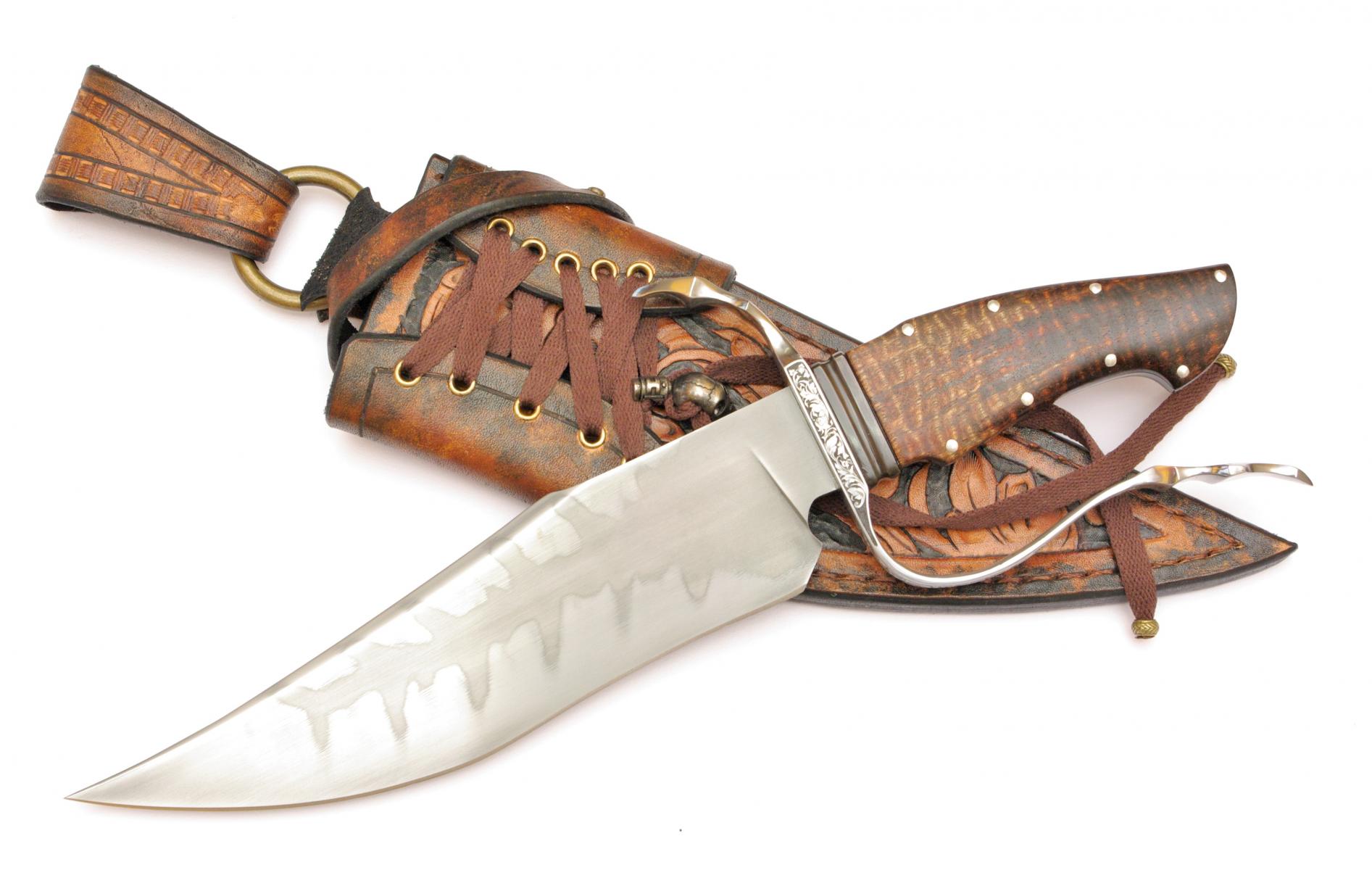 Italian knife maker Fulvio Cuccurullo was a first time participant in Gembloux, and won the prize for best
fixed blade with this ‘Seth’. The blade is selectively hardened 1095, the handle is 1095 steel and Sapeli
Mahogany, fastened with 325 Sterling silver domed pins. The C40 guard is engraved by Carlo Cavedon. 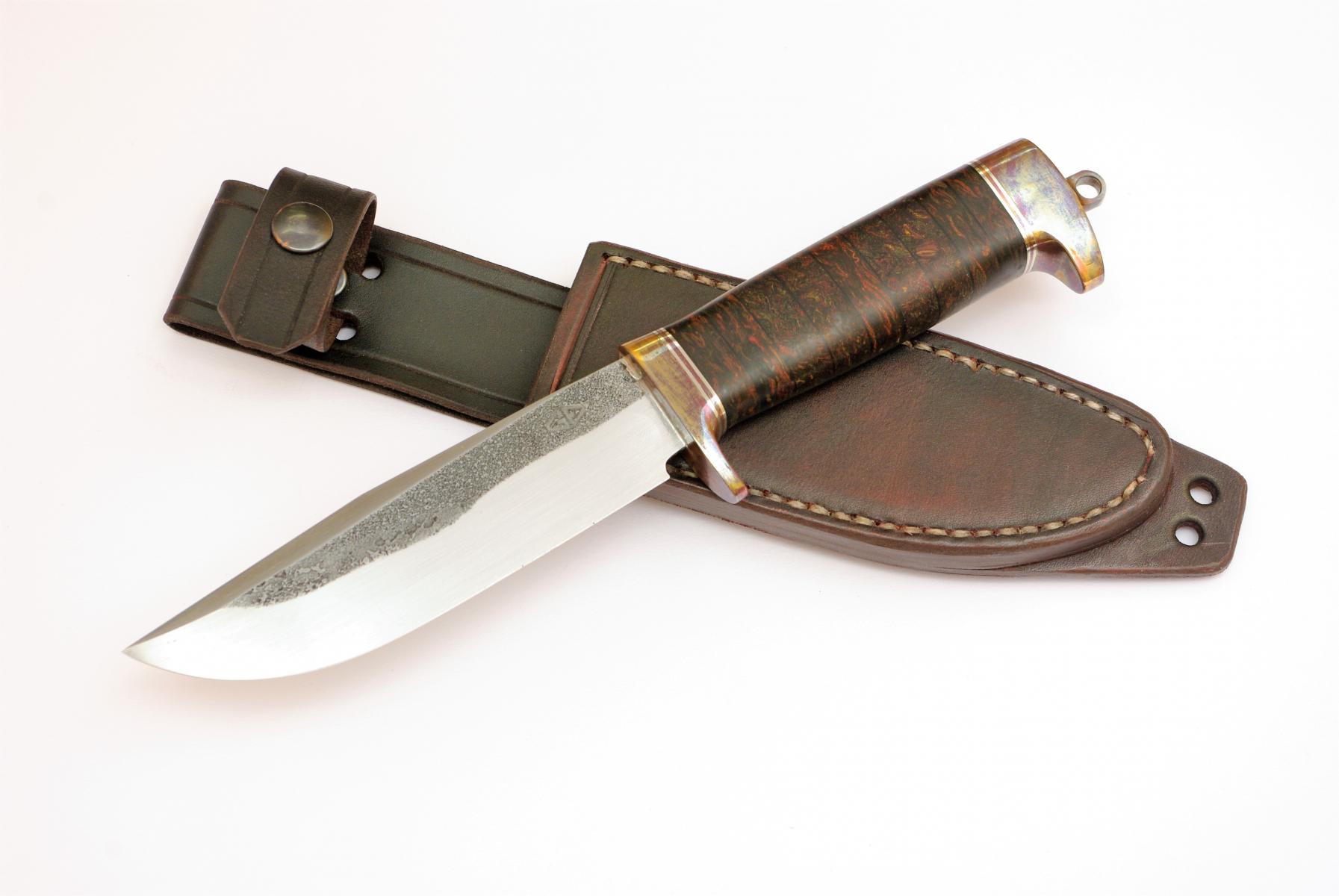 Dutch knife maker Gert van den Elsen baptised this knife the SHTF (Shit Hit The Fan). The model is inspired
by the ‘theater-made’ World War II combat knives. The 14 cm blade is O2, the handle is Rag Micarta, with
Nickel Silver spacers and a Copper guard and pommel.

French knife maker Guy Poggetti (La forge de sparus) showed this ‘Hyder’. The knife has a so-called bolster
lock – the locking bar extends into the bolster. The 8.5 cm blade is from N690, and rotates on ball bearings.
The bolsters are Titanium and the handle scales are Carbon fibre. 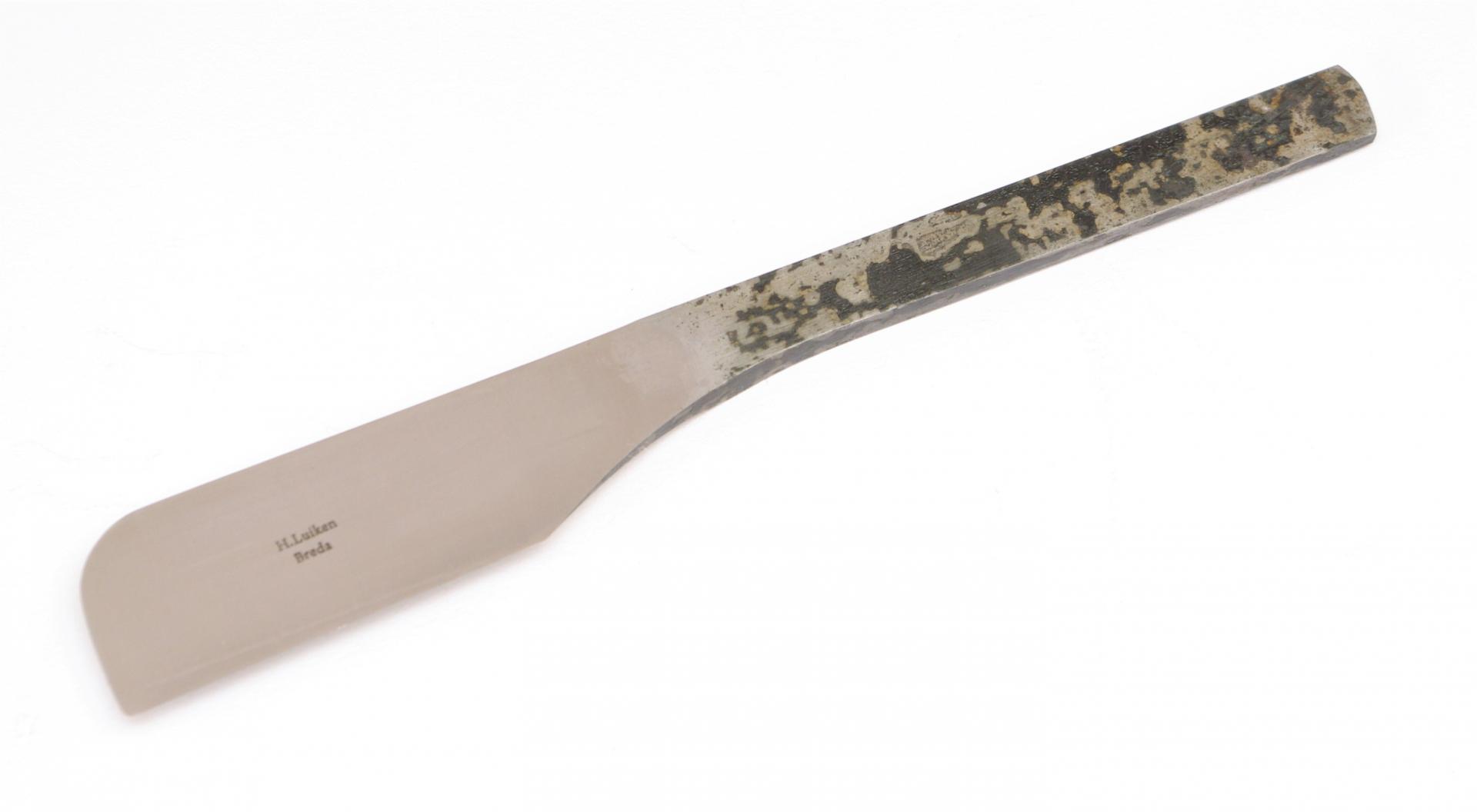 A Japanese Kamisori razor blade by Dutch knife maker Hans Luiken. The knife is made from 125sc Carbon steel. 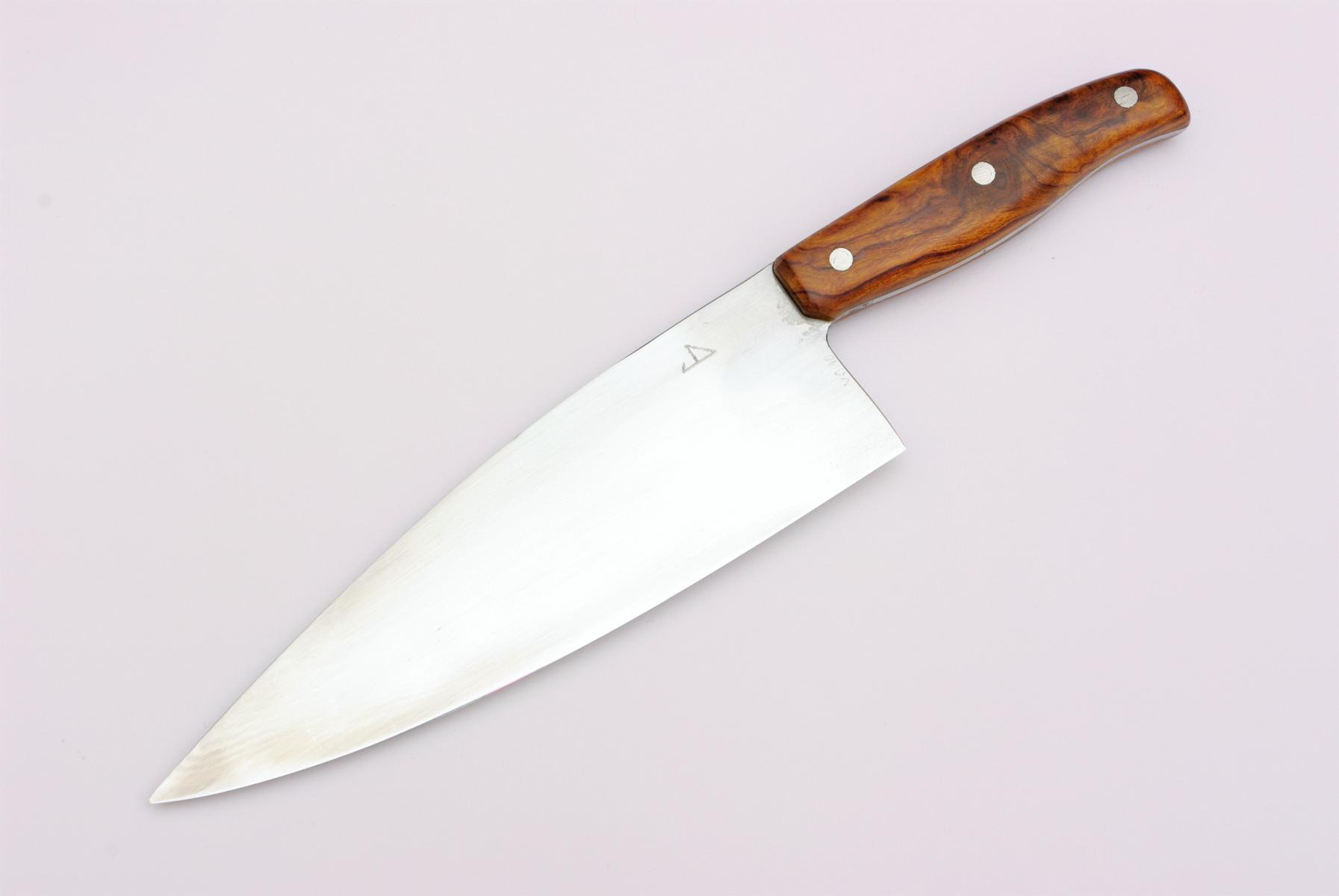 A Chef’s knife by Belgian maker Jan Dox. The 200 mm blade is Suminagashi VG10 and Inox, the handle
is Arizona Desert Ironwood. 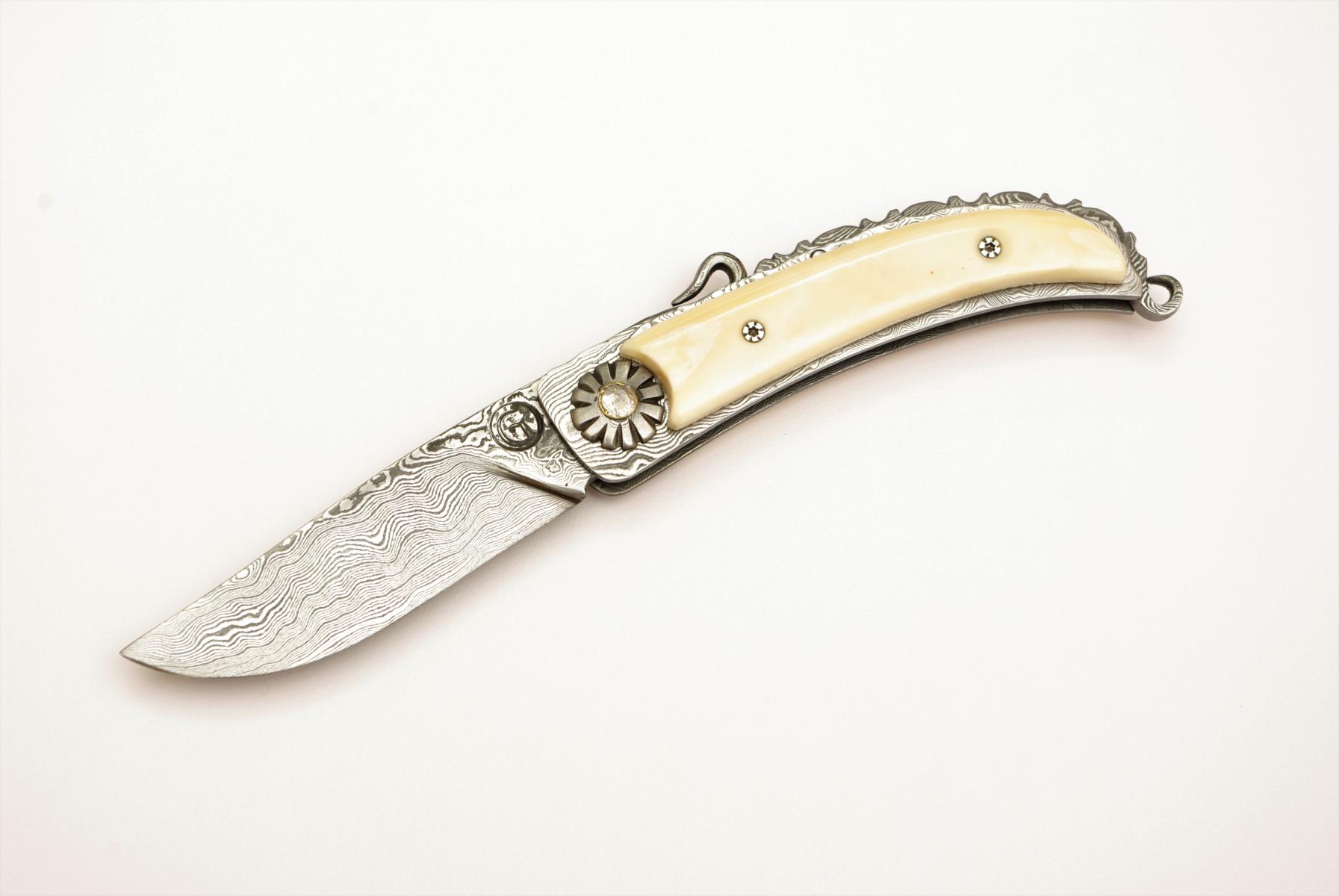 Corsican knife maker Jean Noël Guillaumin made this exuberant folder. Blade and liners are from 320 layers
of XC75 / 15N20 Damask. The handle scales are Warthog tooth. The blade has a double 'flipper'. 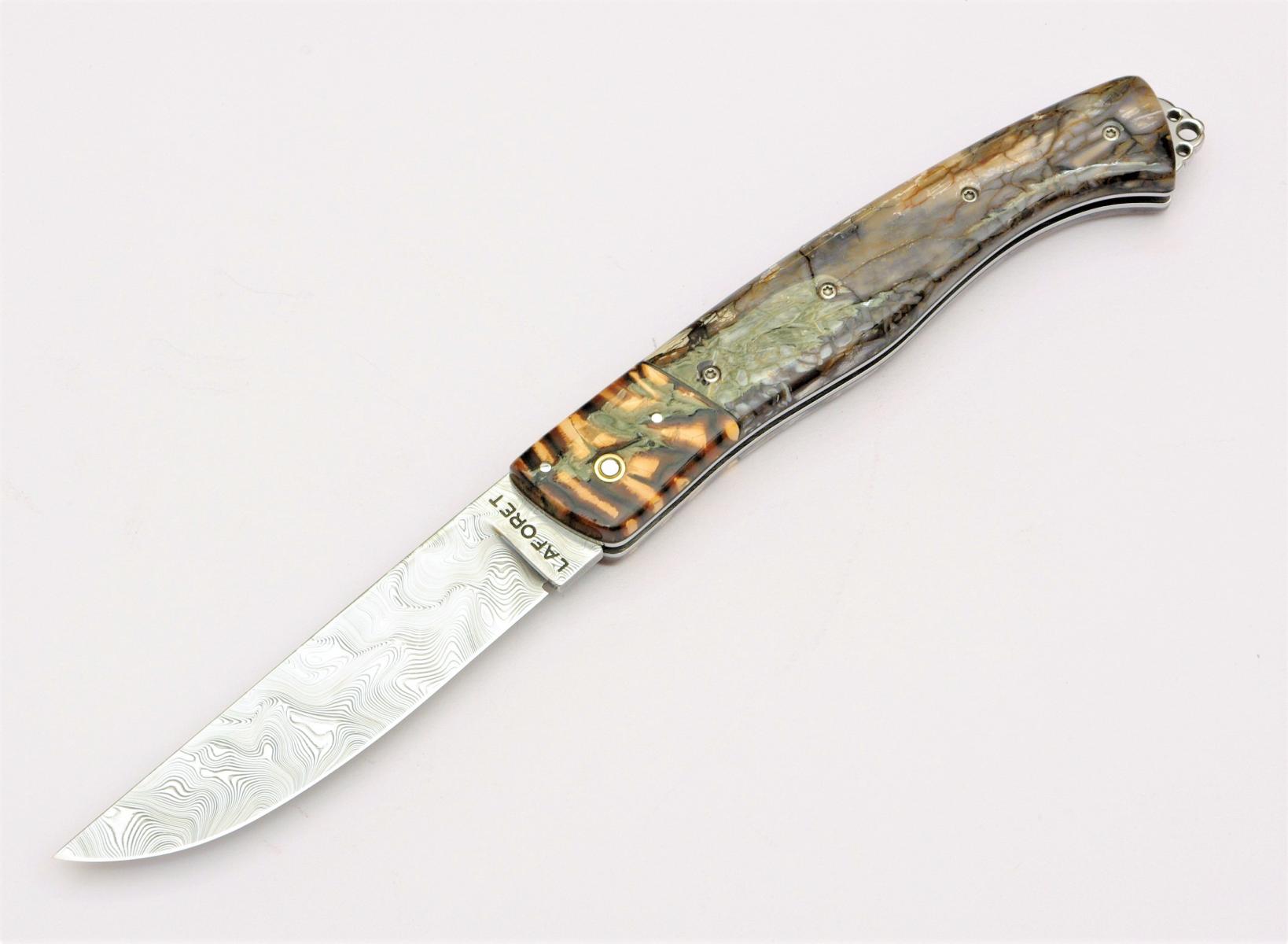 The ‘Thiers’ is a model of a folding knife which has become a representation of the knife industry in this
French town. Jean-Claude Laforet calls this knife ‘Interpretation of the Thiers’, which means he gave it his
own twist. The handle is Mammoth ivory pulp.

Finnish master bladesmith Pekka Tuominen brought two of his trainees with him to the Gembloux knife
show, to present their work. Both are 15 years old. The upper Puukko was made by Lenni Jäntti from
80CrV2steel, with a handle from Brasilian Ebony with brass fittings. The lower Puukko was made by
Riku Matilainenfrom 80CrV2 steel and Pewter, with a dyed Curly Birch handle. Keep up the good work! 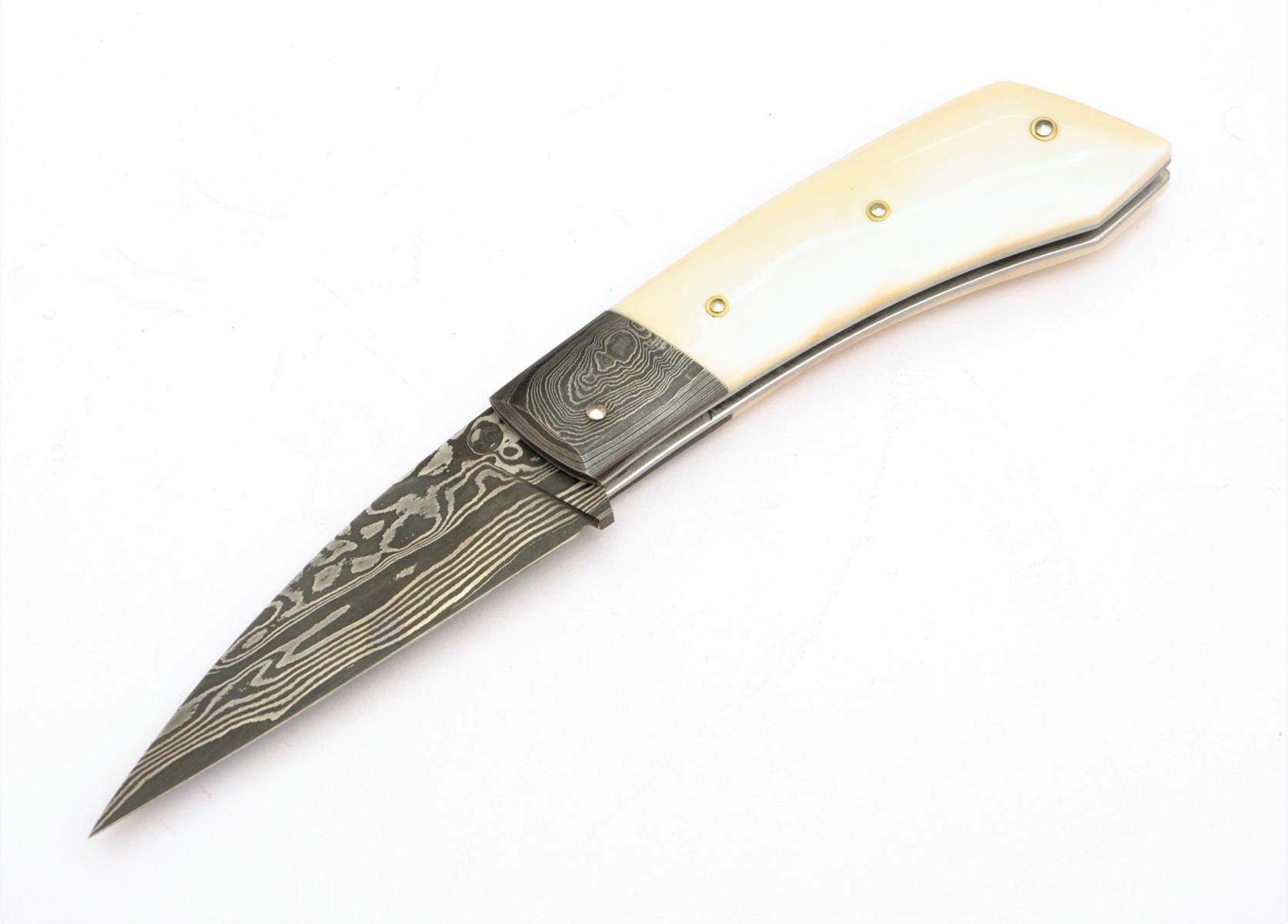 The ‘Apex’ by French knife maker Louis Blanchet Kapnist. The blade is 90MCV8 / 15N20 Damask. The
bolsters are Damask and the scales are Warthog.

A folding Puukko by Belgian knife maker Maarten Stryckers. The blade is 1.4528 steel, the handle is
Ti-6Al-4V on one side a solid piece of Micarta (including the back spacer) on the other. The knife is a
slip joint variation, with a detent ball. The overall length is 17 cm. 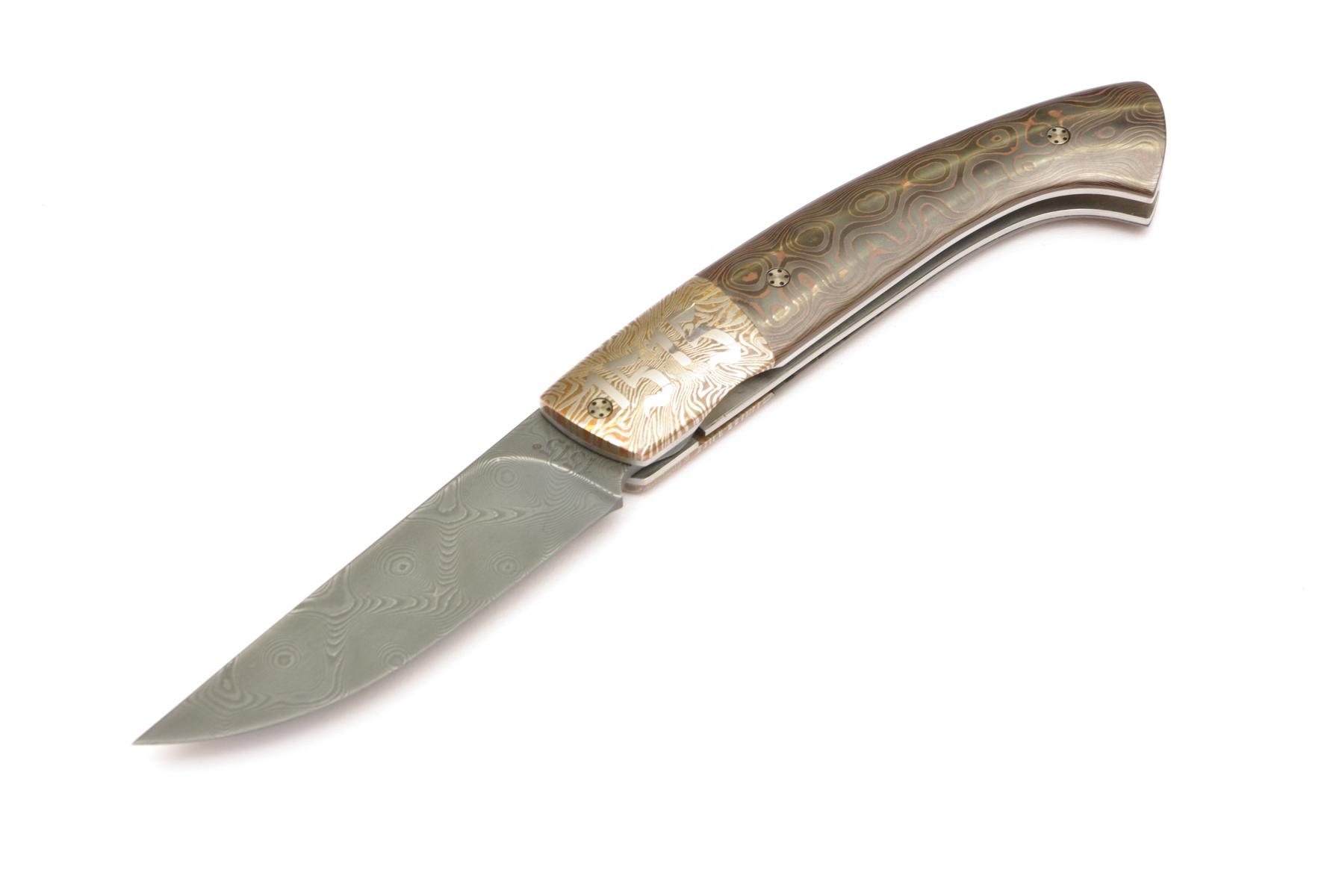 Manu Laplace continues to find new materials for his famous 1515 knife model. This one has a Zladinox Piramid Damask blade, Carbon Fibre handle scales and custom made Mokume bolsters with the 1515 model designation.
The back spacer is shaped like a spinal column.

Marcello Moruzzi lives and works in Luxembourg. In Gembloux, he showed this kitchen knife, with an
overall length of 355 mm. The blade is 1.2842 / 75Ni8 Damask, the handle is stabilised Basswood. 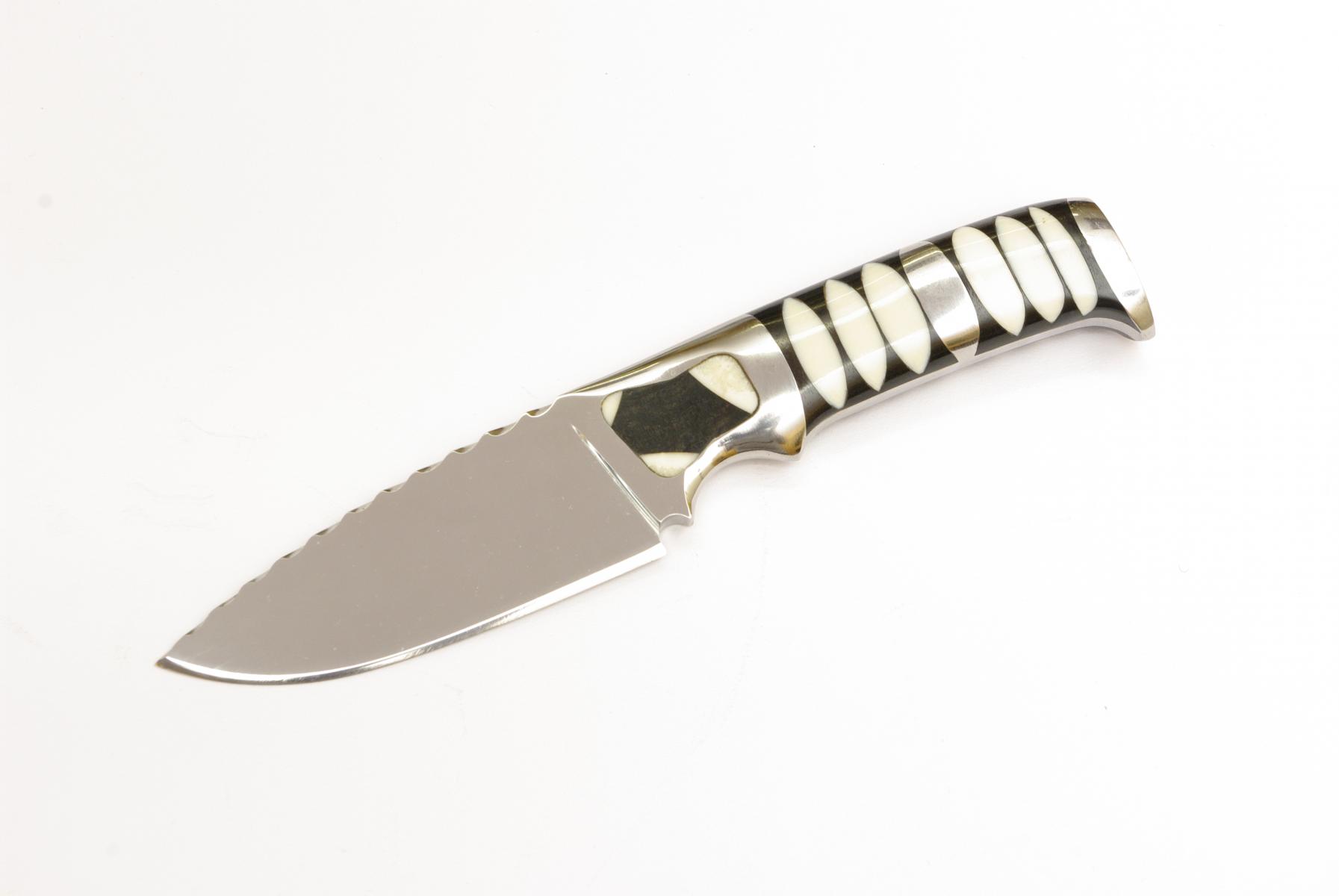 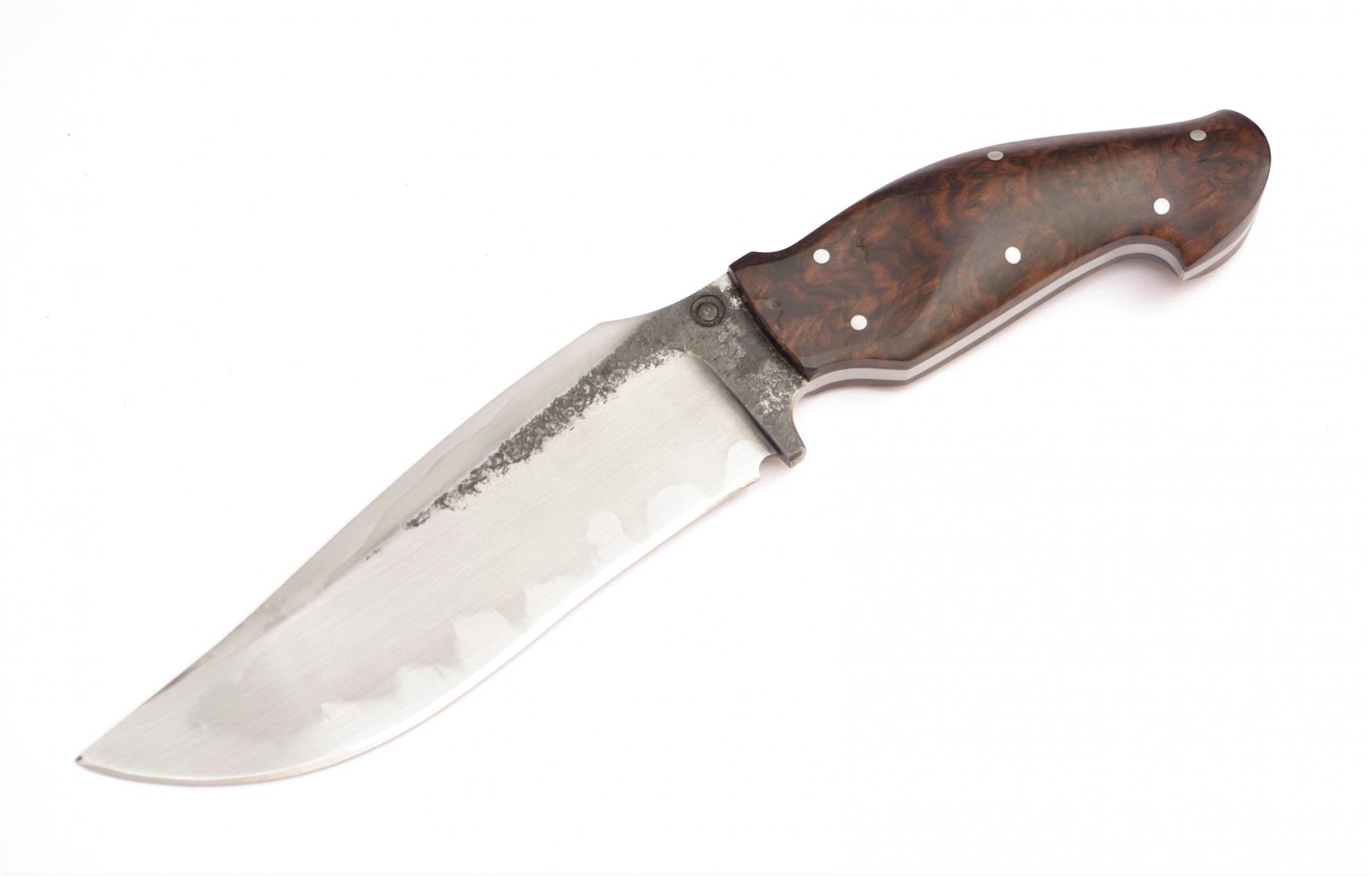 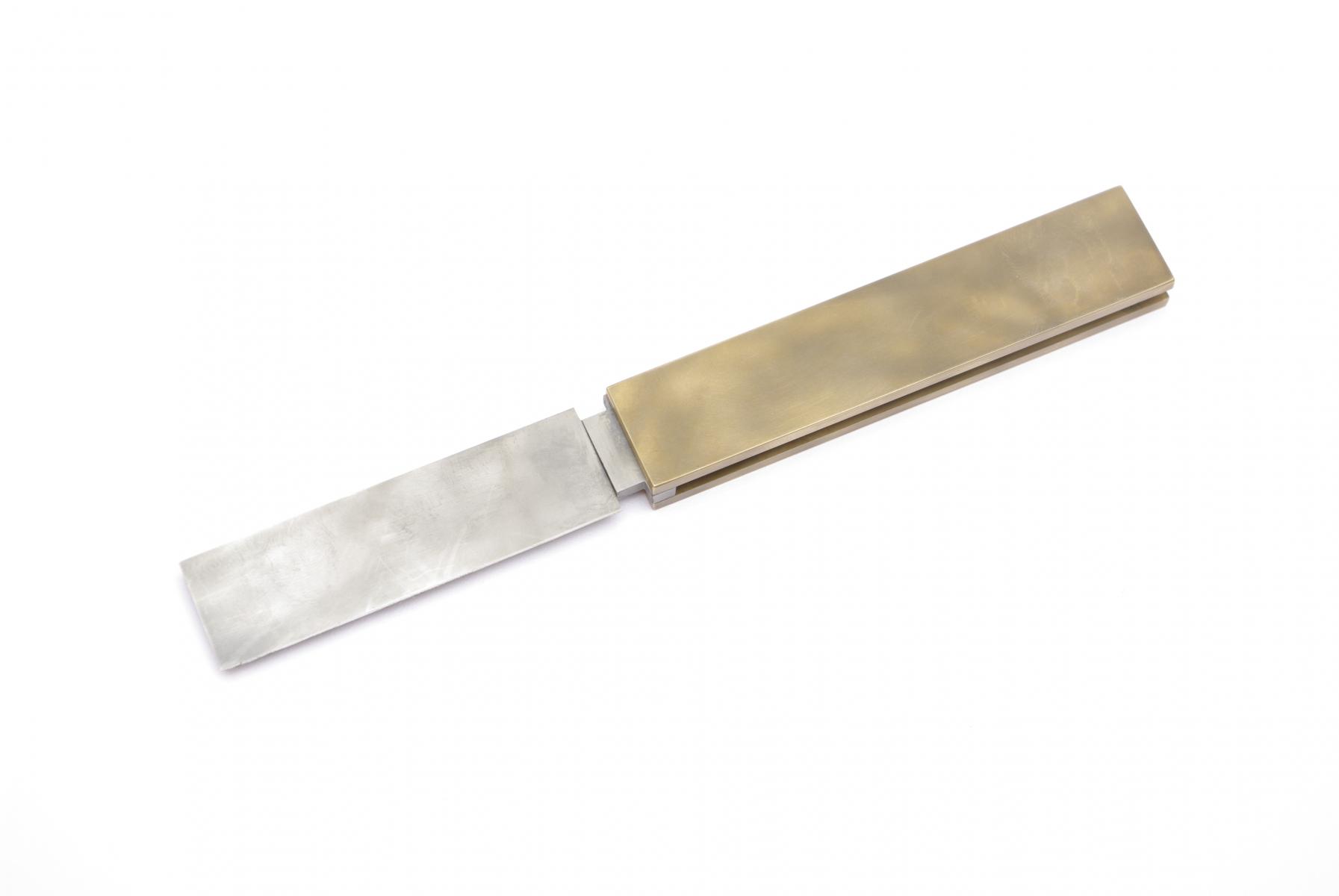 French knife maker Nicolas Couderc is well-known for his geometrical patterned knives. This model is
called the ‘O2’. The blade is RWL34, the handle is Brass.

The ‘Integral Outdoor’ by Italian knife maker Oliver Goldschmidt (for an article on his work see European
Blades Mag. 23). The blade is 15N20 / K720 Ladder Damask, the handle is fossil Walrus.

Chris Goldmann (Pegasus Knives) is a South African born knife maker, who lives and works in Portugal.
In Gembloux he showed this dagger, with an asymmetrical blade from Damasteel Hakkapella. The handle
is Onyx horn, with the bottom part of a calibre .30-06 cartridge case in the pommel. 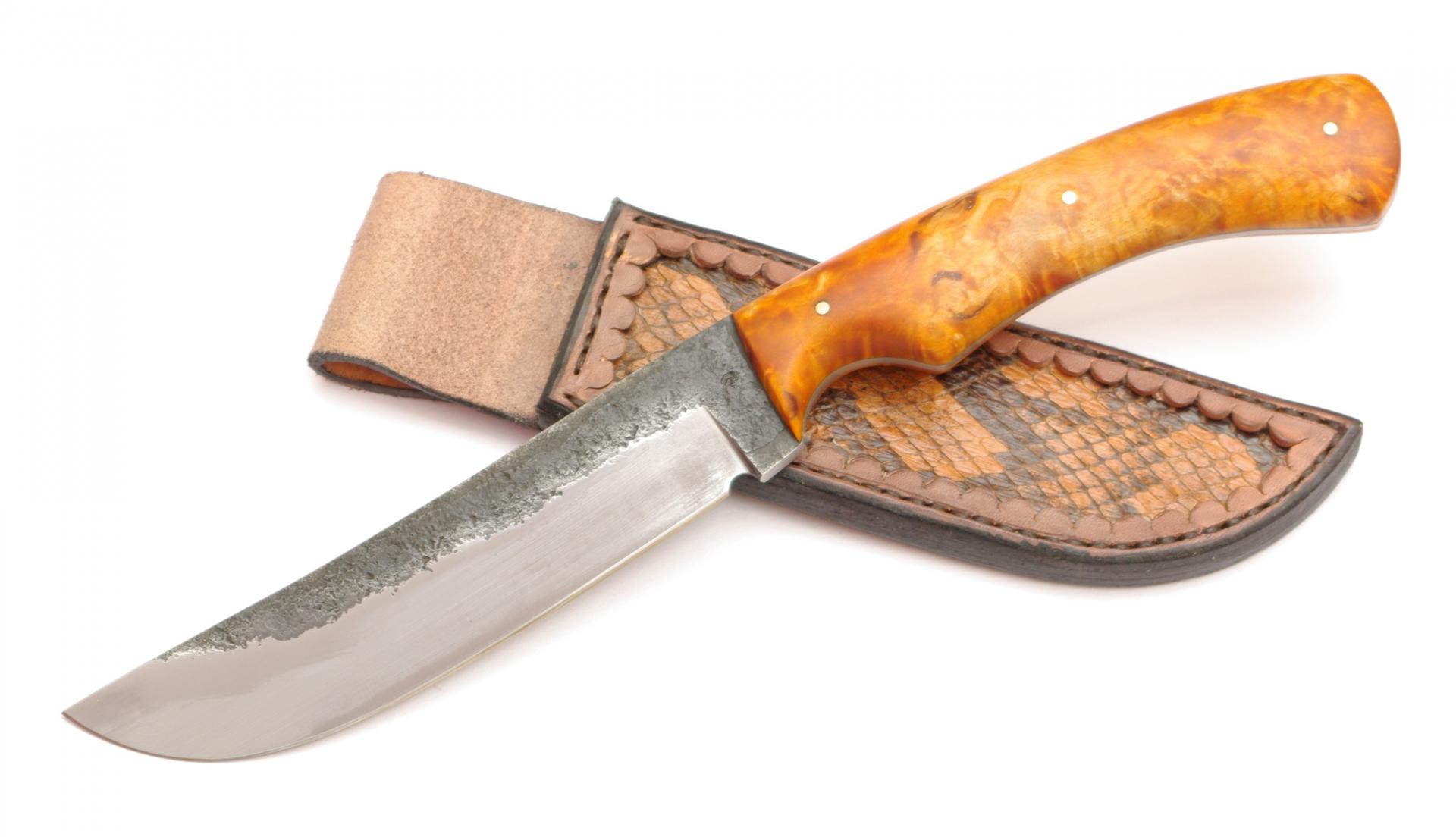 Peter Sober is a Belgian knife maker who lives and works in Spain. This is one of the knives he showed
in Gembloux, made from O1 (1.2510) steel. The handle is from Thuja wood. 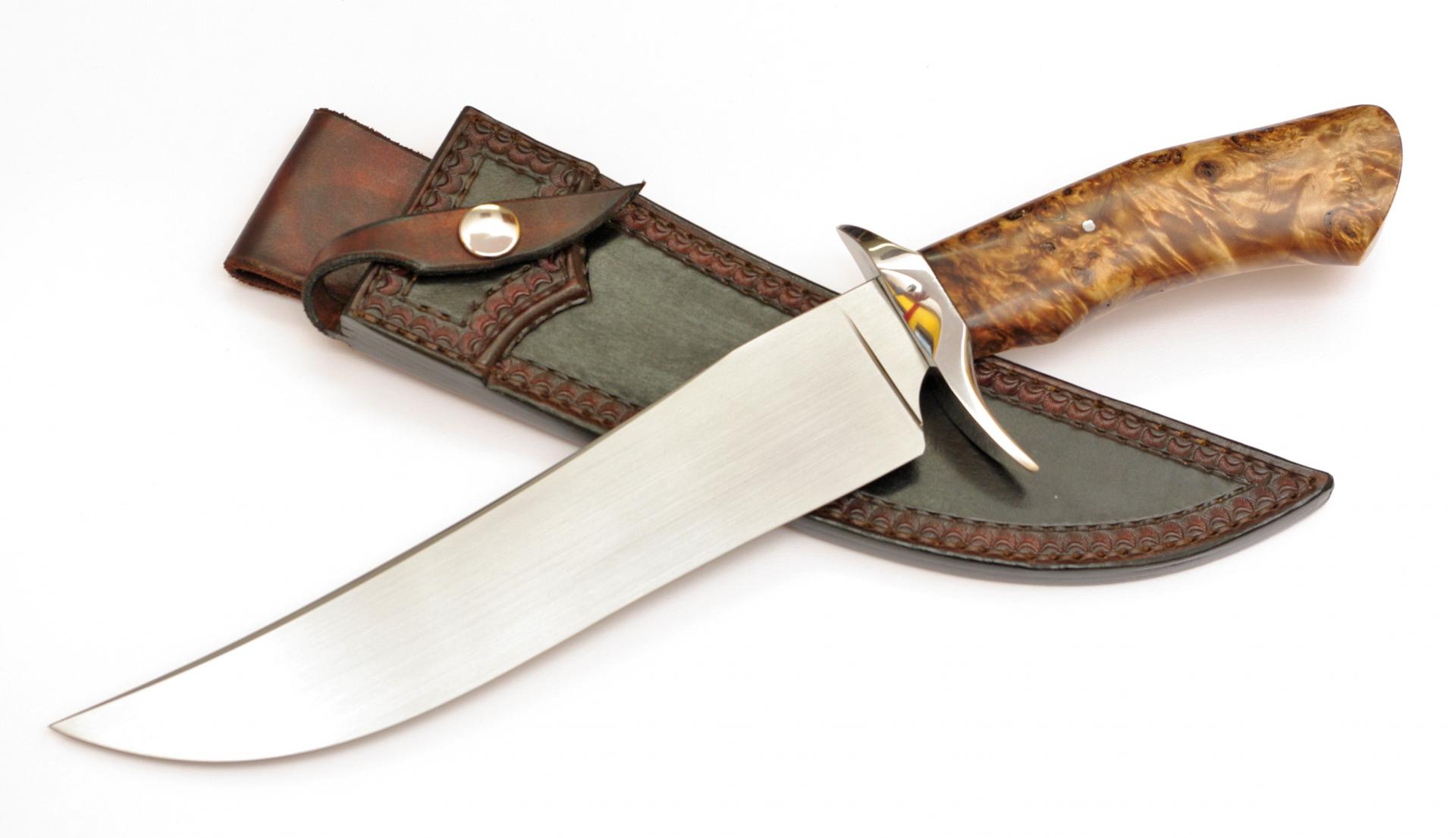 Dutchman Peter van Es is a passionate knife maker, and his work is improving with every show. This
impressive Bowie has an O1 (1.2510) blade, a stainless guard and a stabilised Poplar handle. The overal
l length is 320 mm. 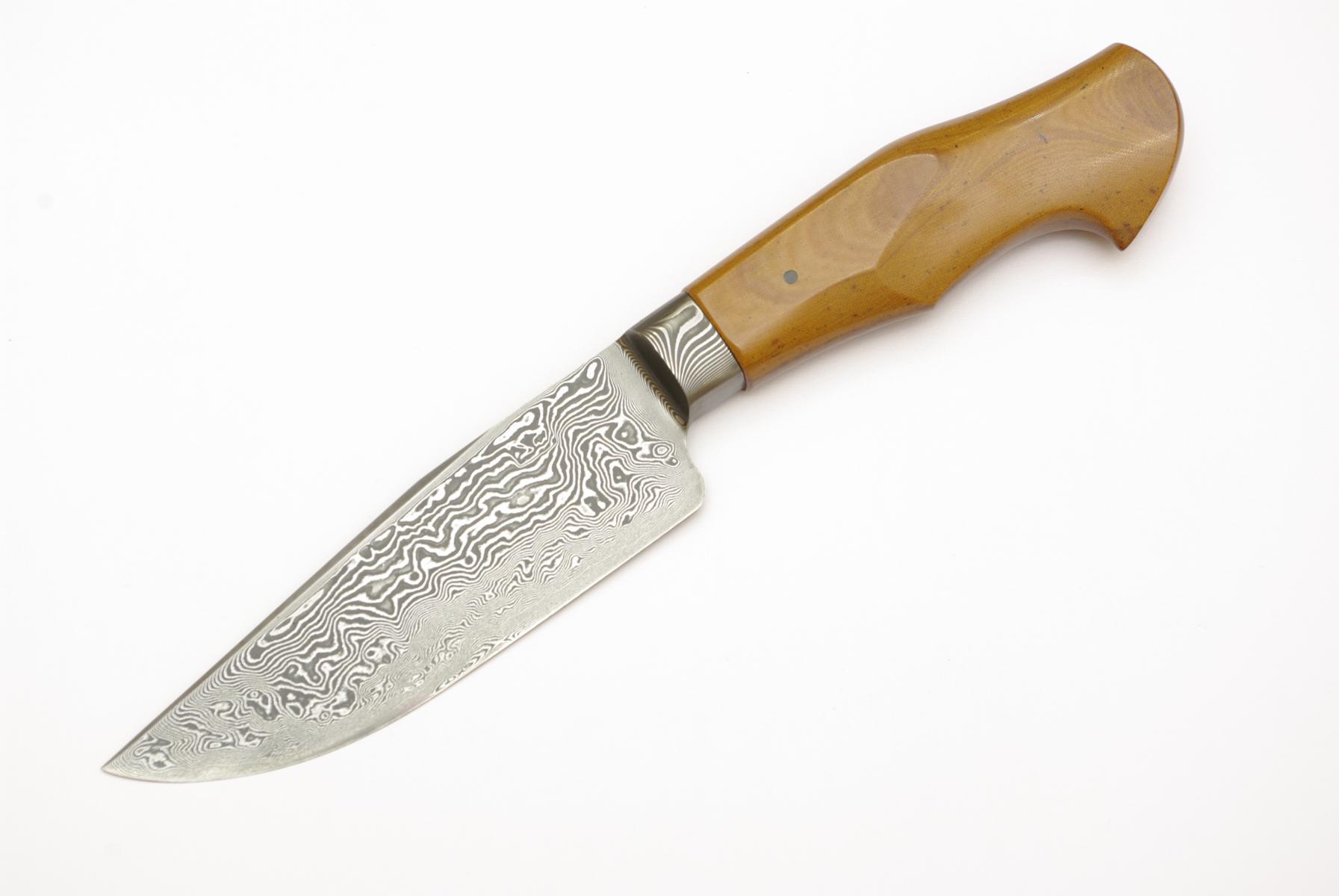 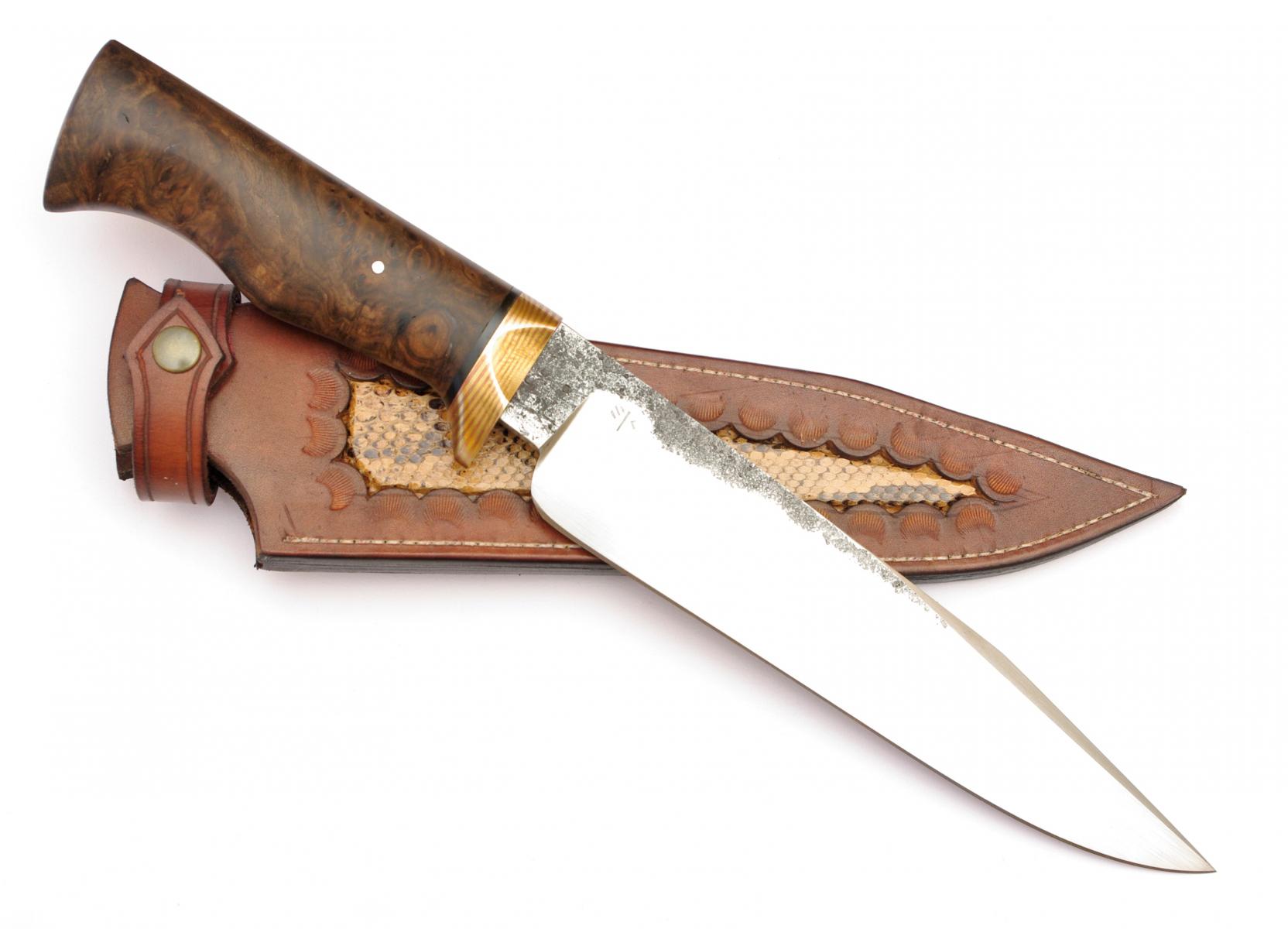 Sébastien Pontio works under the beautiful name Pontio Metal Dreams. These include knives like these,
with a 90MCV8 blade, Mokume guard and Burr Walnut handle. The sheath is leather and snake skin. 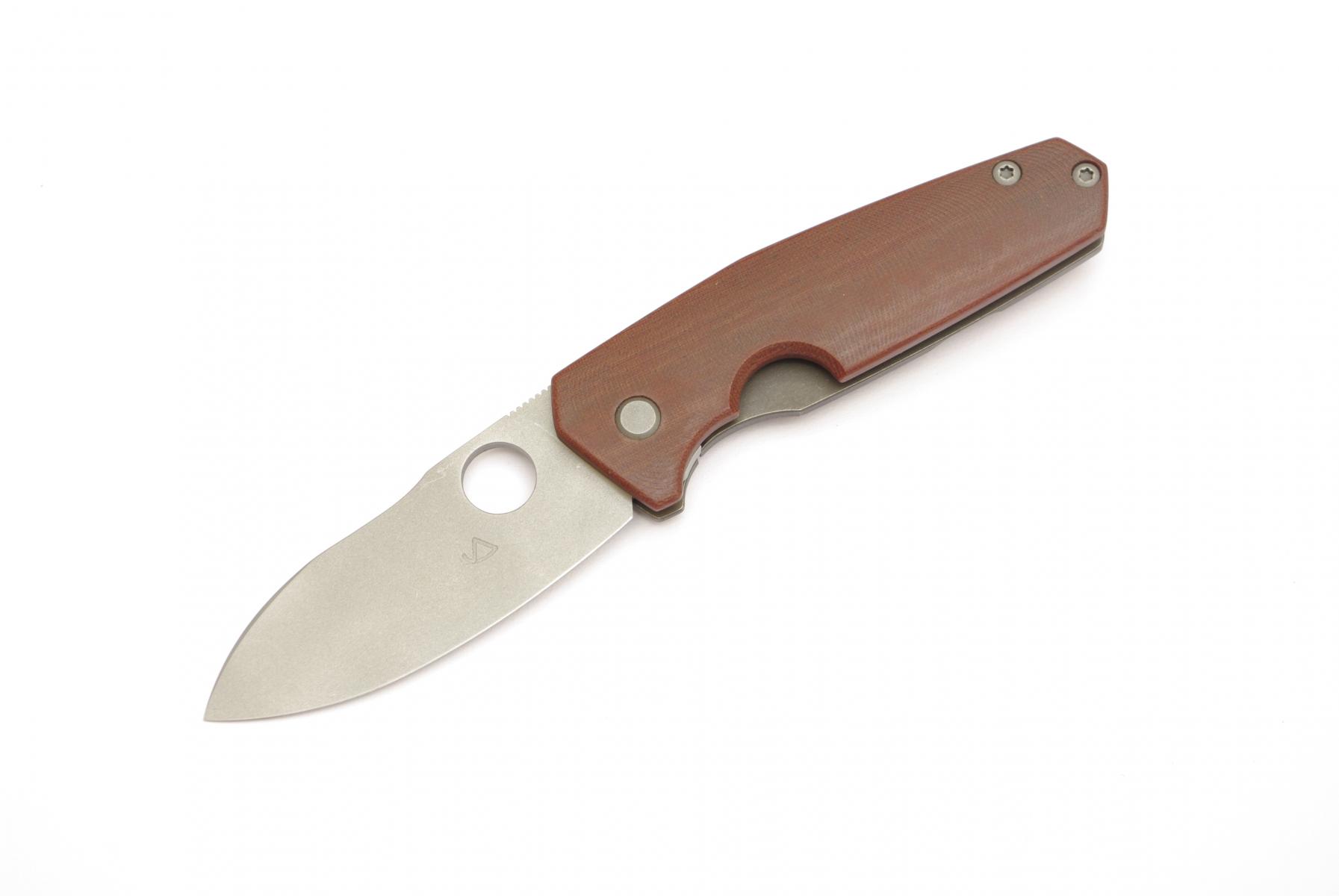 The ‘Compound framelock’ by Belgian knife maker Simen Stryckers. The blade is 1.4528 steel. One handle
half is titanium (Ti-6Al-4V), the other is Micarta. The Micarta half was machined on a four-armed CNC machine,
so it could be made from one solid piece, including the backspacer.

A Scandinavia-style knife by BKS-President Tim Wagendorp. The blade is 52100 ball-bearing steel, the
handle is Reindeer horn and Birch. 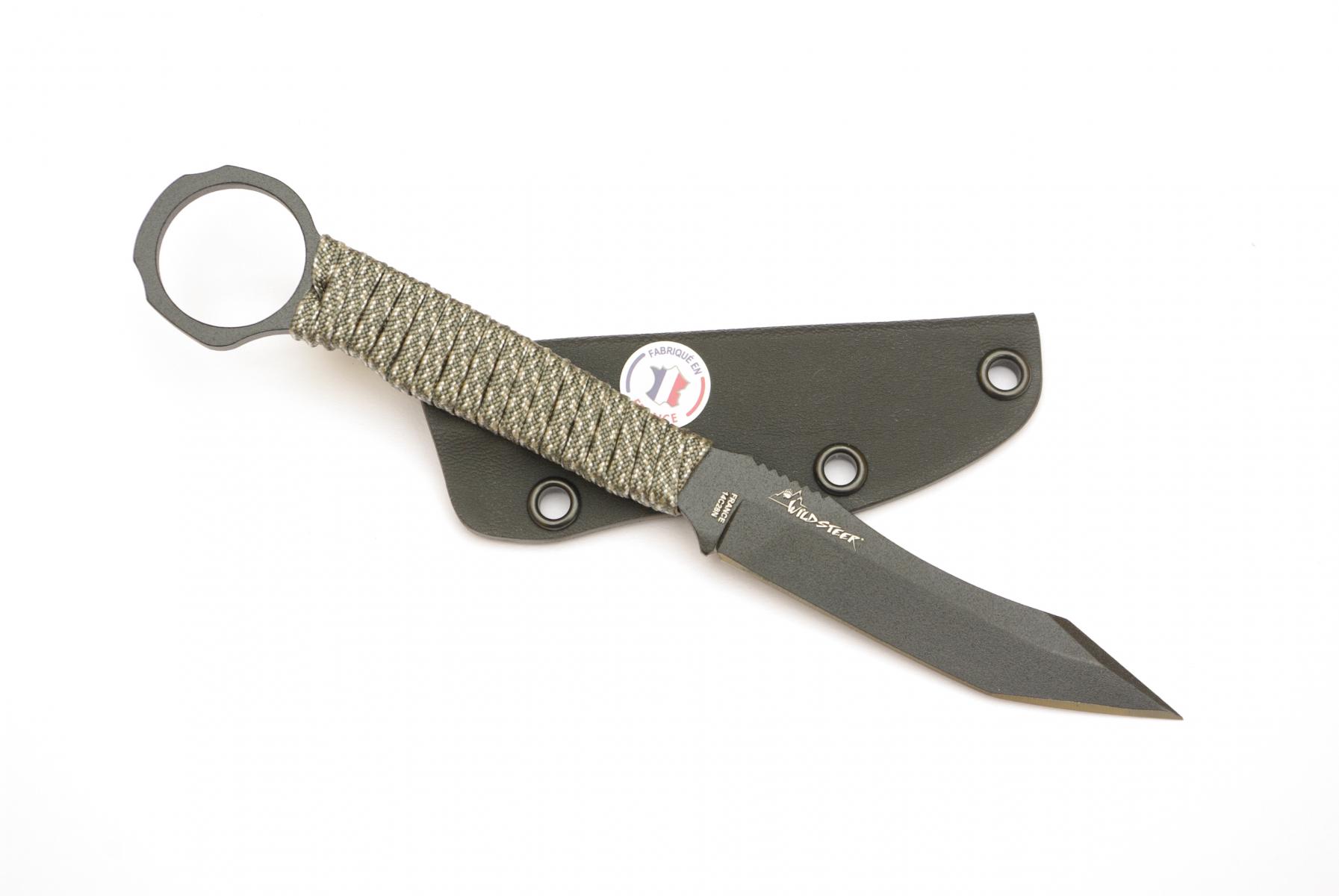 ‘Scorpion’ seems an appropriate designation for this knife from the French Wildsteer company. The knife is
made from 14C28N steel, cryogenically treated. The handle is Paracord. The Scorpion was designed as a
back-up tactical knife, in collaboration with a regional group of the French GIGN, the elite police tactical
unit of the Gendarmerie Nationale.
Our sponsors
Advertisements
Dit is een geprinte versie van de publicatie op