Fewer tables, more space, and higher quality: those were the goals set by the organising Belgian Knife Society for their annual show. Space is always a problem in Gembloux, but as far as the quality goes, they fully succeeded. 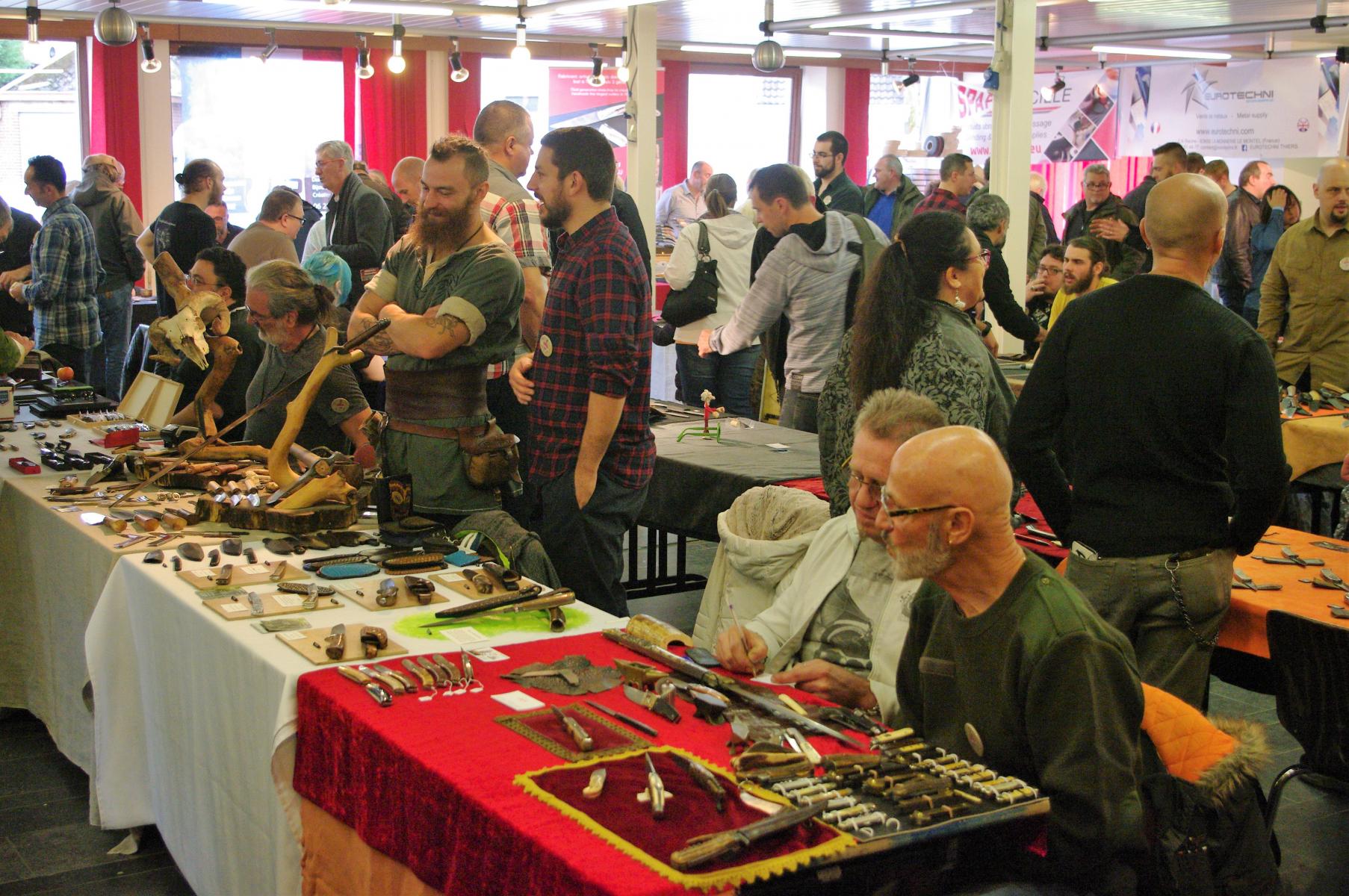 A small part of the Gembloux show – busy as ever.
With more than 160 exhibitors, the knife making days of the Belgian Knife Society in Gembloux, held on November 10 and 11, were busy as always. Yet the organisation had slightly diminished the amount of tables, and adapted their arrangement to create more space. The admission policy was stricter this time. Gembloux traditionally has a waiting list for exhibitors and the BKS is trying to concentrate on quality. Judging by the knives shown by some very impressive newcomers, they are doing well.
On the following pages we’ll showcase a selection of the treasures at Gembloux. The complexity of such a show is maybe demonstrated by the fact that we completely missed the table of the knife maker who won the ‘Best of Show’ award, Tönu Arrak. Mea culpa! 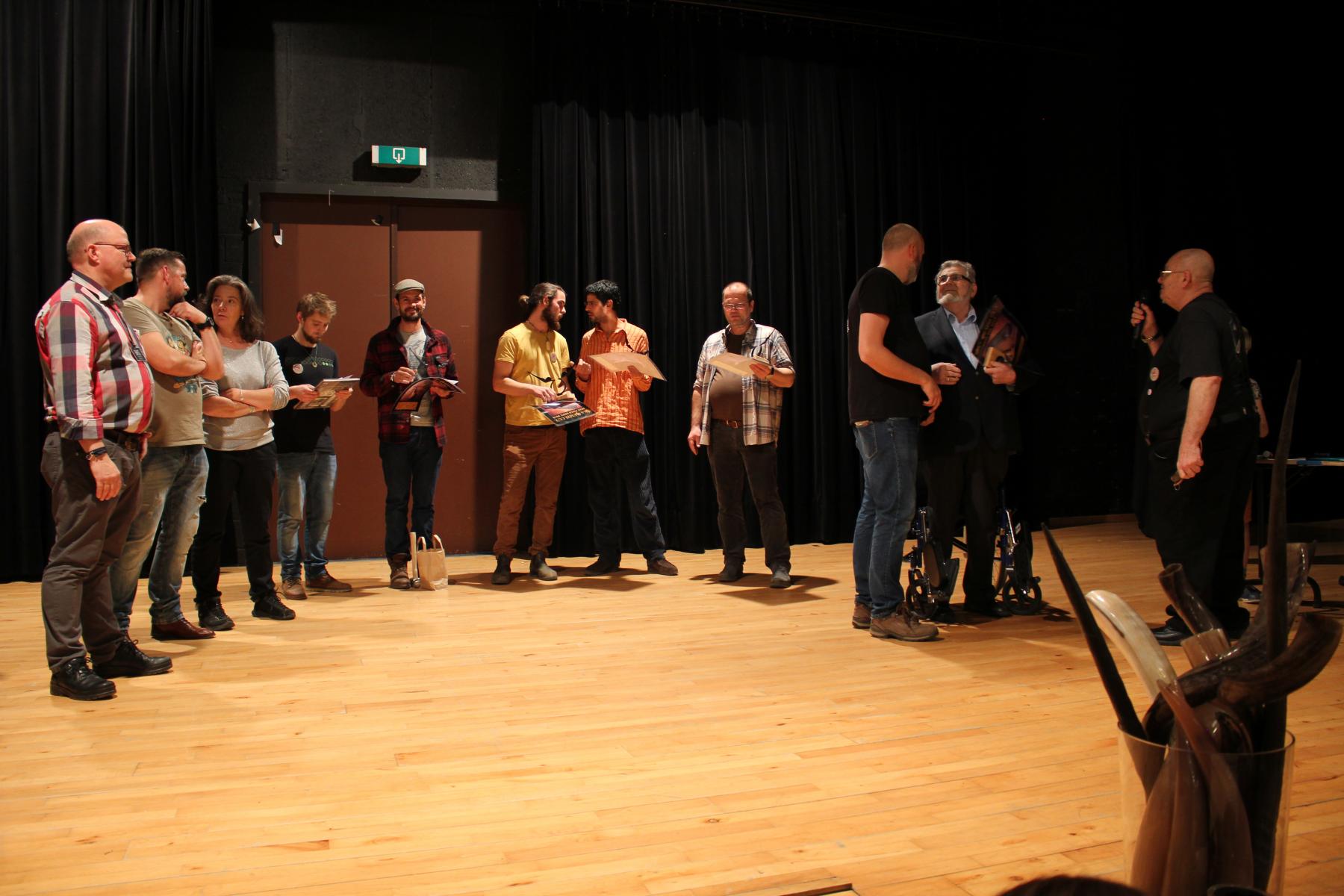 The Jury and prize winners.
The show itself received an important recognition as well namely, the 19th edition of the BKS knife show got the ‘European Year of Cultural Heritage’ label, thanks to the yearlong cooperation with Gembloux and its touristic service. The BKS finds it an important impulse to continue to devote itself to the knife making craft.
The date for next year’s show has already been set: November 9 and 10, 2019, at the Foyer Communal, Place A. Lacroix in Gembloux - as usual. 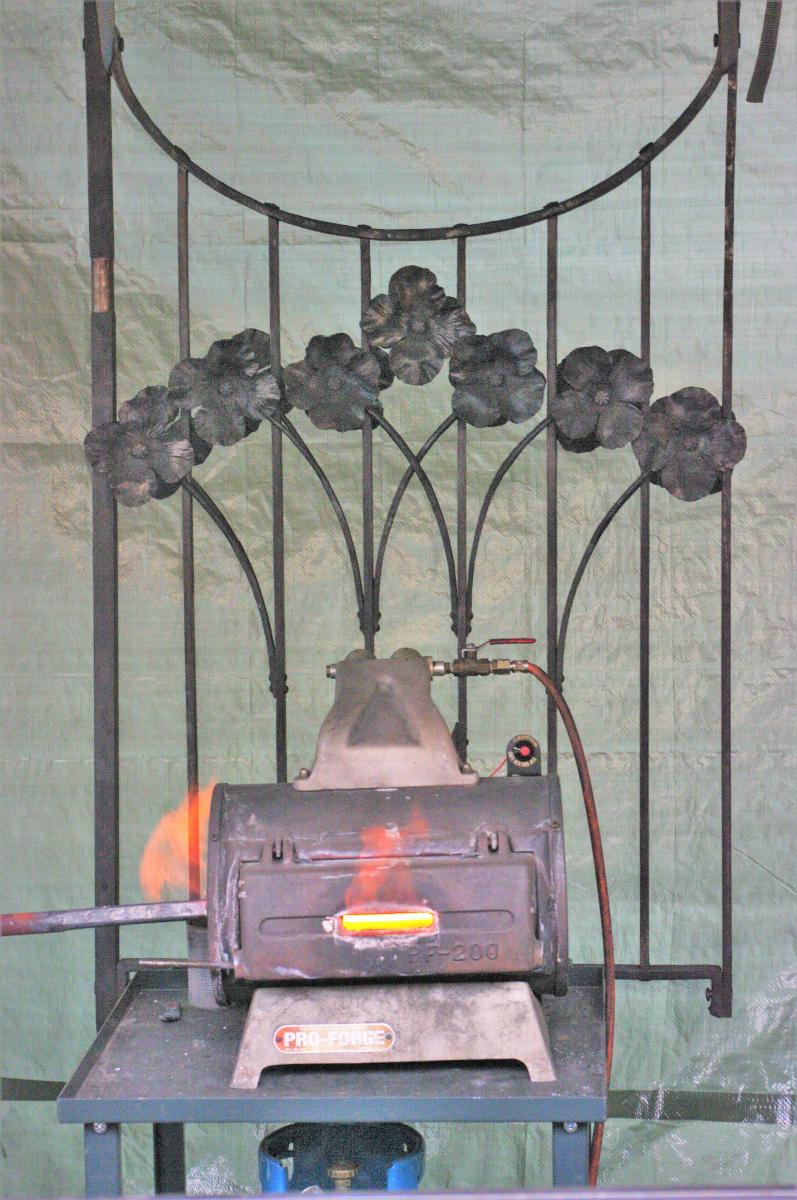 Left: Forging can be about knives, but about many other beautiful things as well. Just have a look at this
wonderful garden fence.
Right: The BKS show features not just knives, but an abundance of tools and knife-making materials as well. 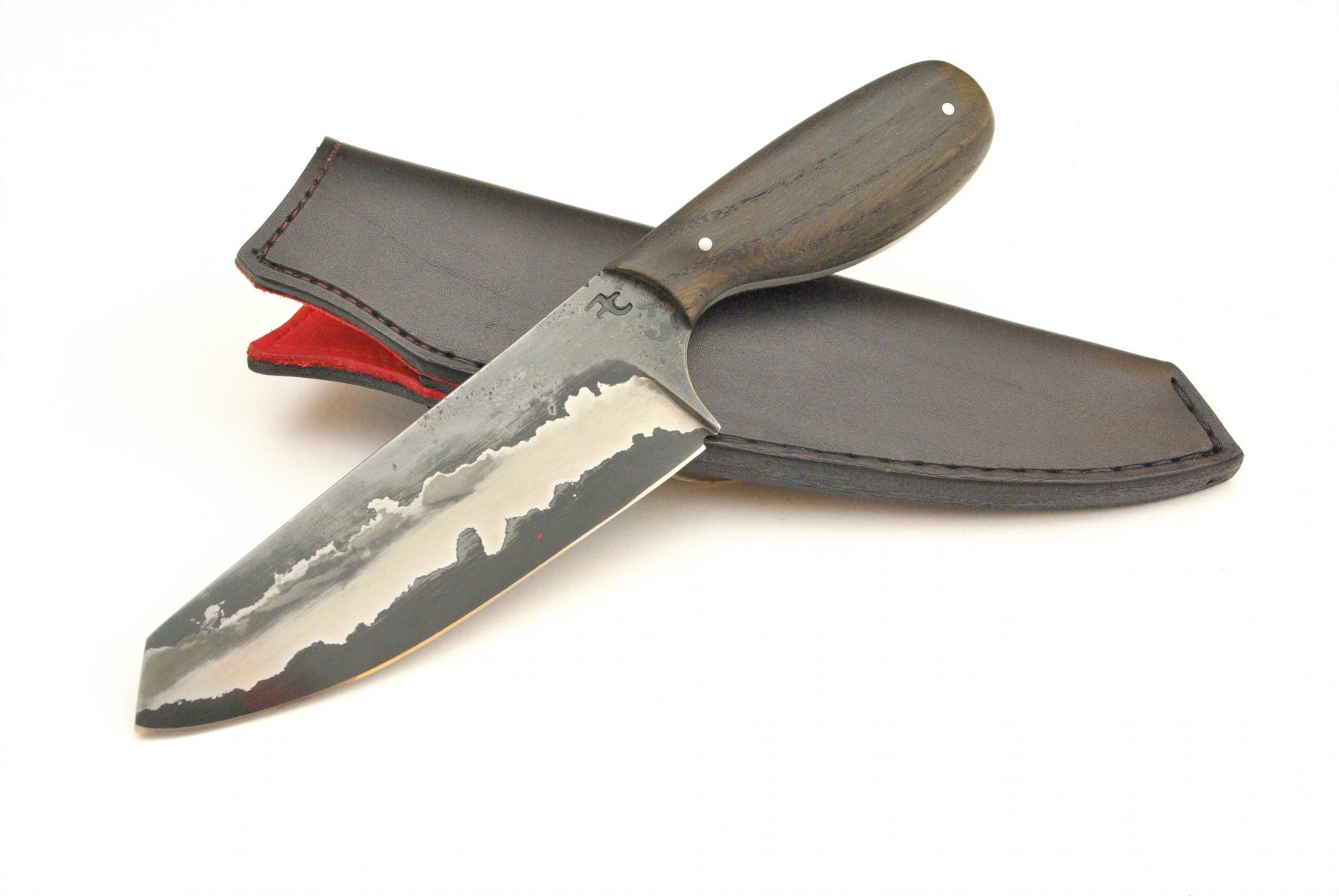 Fred Charrier calls this knife ‘Brume’, which translates as fog. The fixed blade is made of 90mcv8, 15N20
and XC75 steel. The handle is Morta, or bog-wood.

The ‘Ryu Tanto’ bij Knifetofke Design (ST4SP – Special Things for Special People) is a 160 mm long knife
with an N690 blade and Micarta handle. The knives were made by Guillaume Antoniucci.

The ‘Jackdaw’ is a slip joint folding knife made by Nicolas Weber. The blade is 125SC steel, the handle
is bronze and Morta (bog-wood).

BKS-President Tim Wagemaker made this friction folder. The blade is 52100 steel; the handle is made
from Wengé wood.

Oliver Goldschmidt is an Italian goldsmith, balloon pilot and knife maker. And a very good one, for at
Gembloux he won the prize of the best straight knife. This semi integral chopper, which is also on the cover
of this issue, is made of hand forged K720 steel, sandblasted and treated with acid. The handle is white
G10 with a steel butt cap.

A folding knife by French maker Cyril Kalisz. He calls it the ‘Tailleur’ which translates as tailor. The blade
is 125 SC steel, the handle Ironwood. Cyrol Kalisz won in Gembloux the prize for the best switch blade. 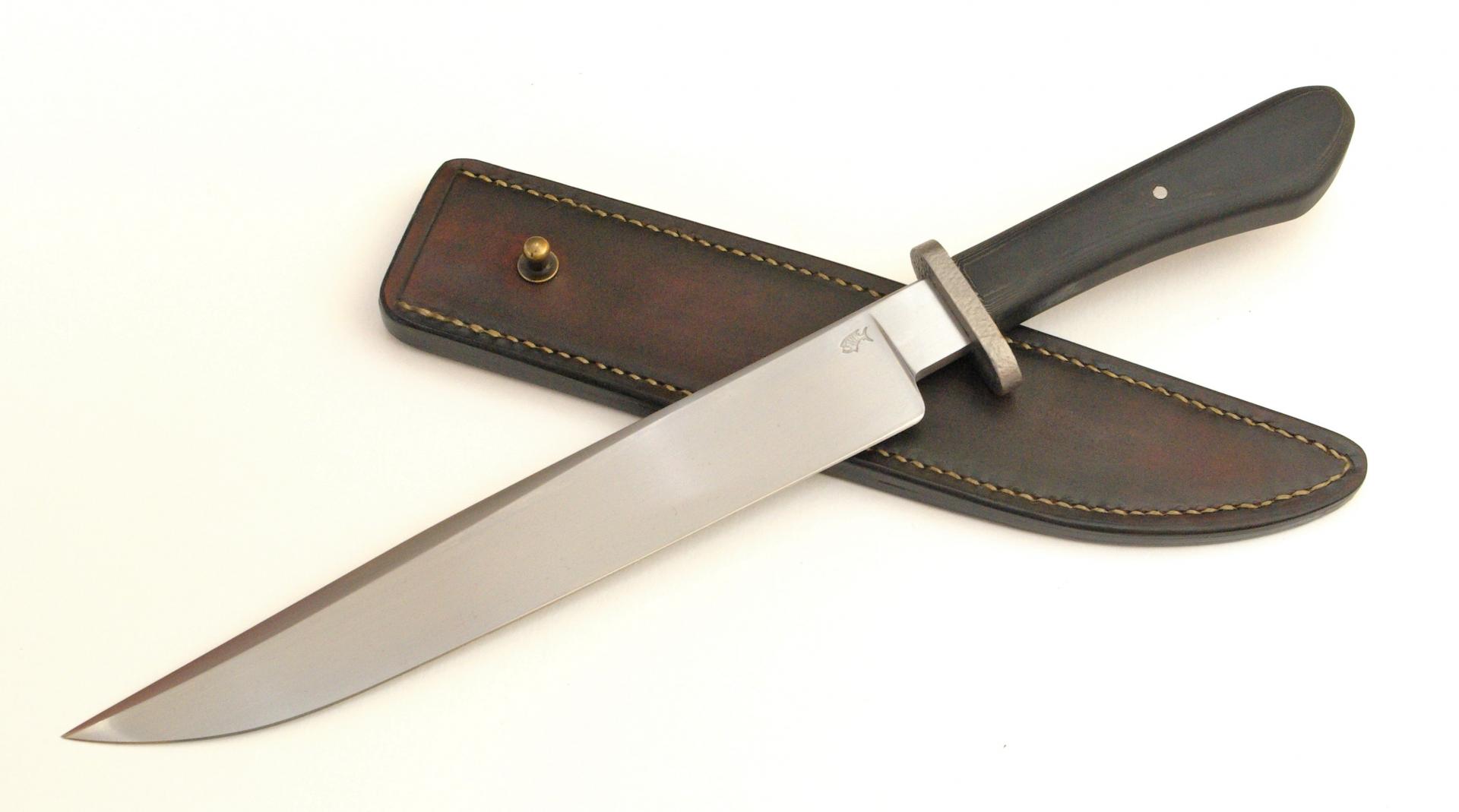 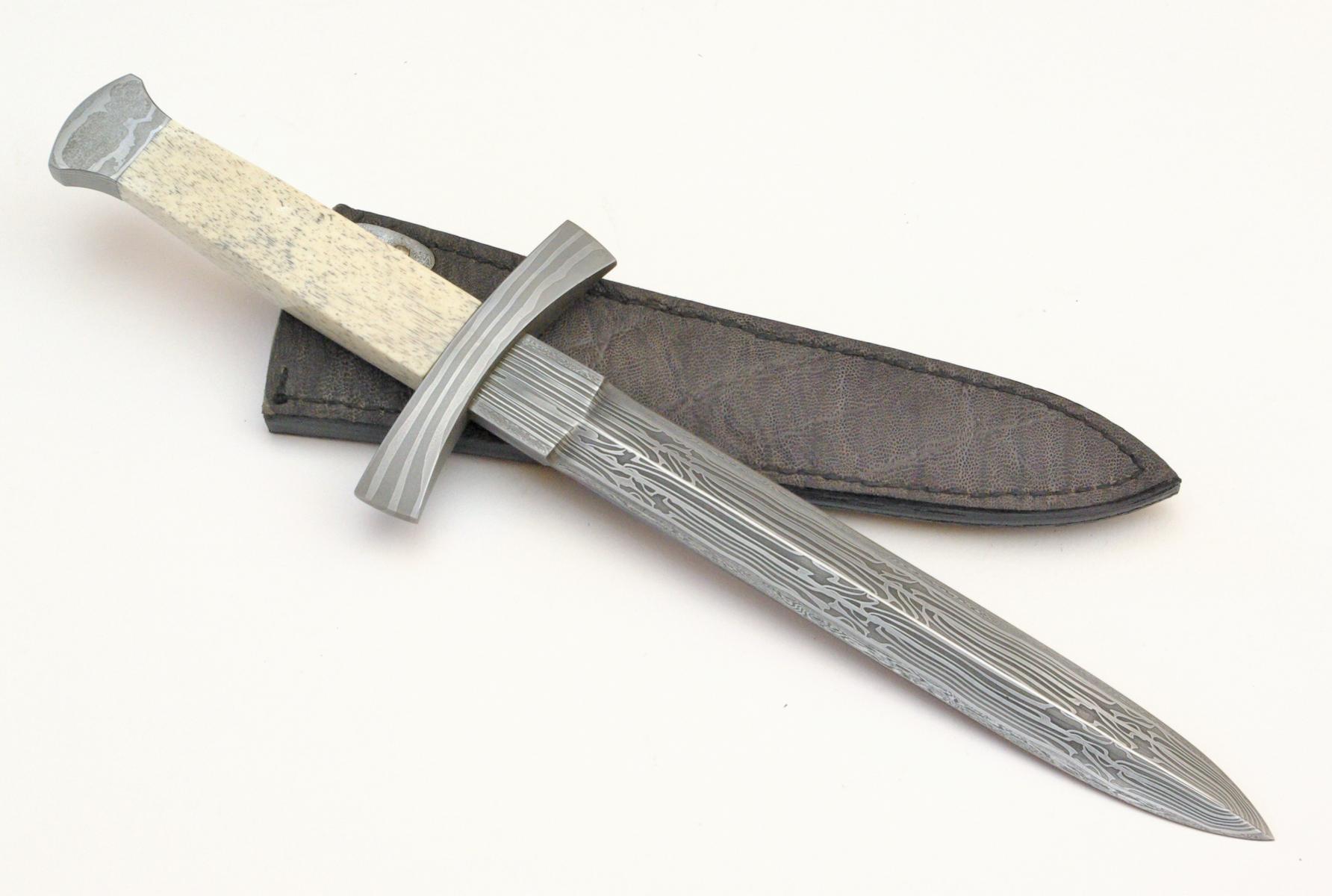 Achim Wirtz named this knife ‘The Forbidden Fruit’, referring to the somewhat risqué combination of a
whale bone handle and an elephant leather sheath. The blade is a complex 11 bar Damascus in Merovingian
style. The guard is Damascus.

José Luis Rey (Breoghan) is a Spanish knife maker who lives and works in France. This ‘Nordic’ has a
Damascus blade made by Daniel Vally and a handle made of leather and walnut. The sheath is made of
Birch bark. The overall length of the knife is 290 mm.

This is model AG 335 by French knife maker Adrien Giovaninetti. The blade is RWL34, the handle material
is Maple.

The ‘Xerxes’ is a co-production from French knife maker Tashi Bharucha and Dutch knife maker Gudy van
Poppel. The design is by Tashi, and Gudy made the knife. The blade is CPM154 steel. The titanium handles
are hand-carved. 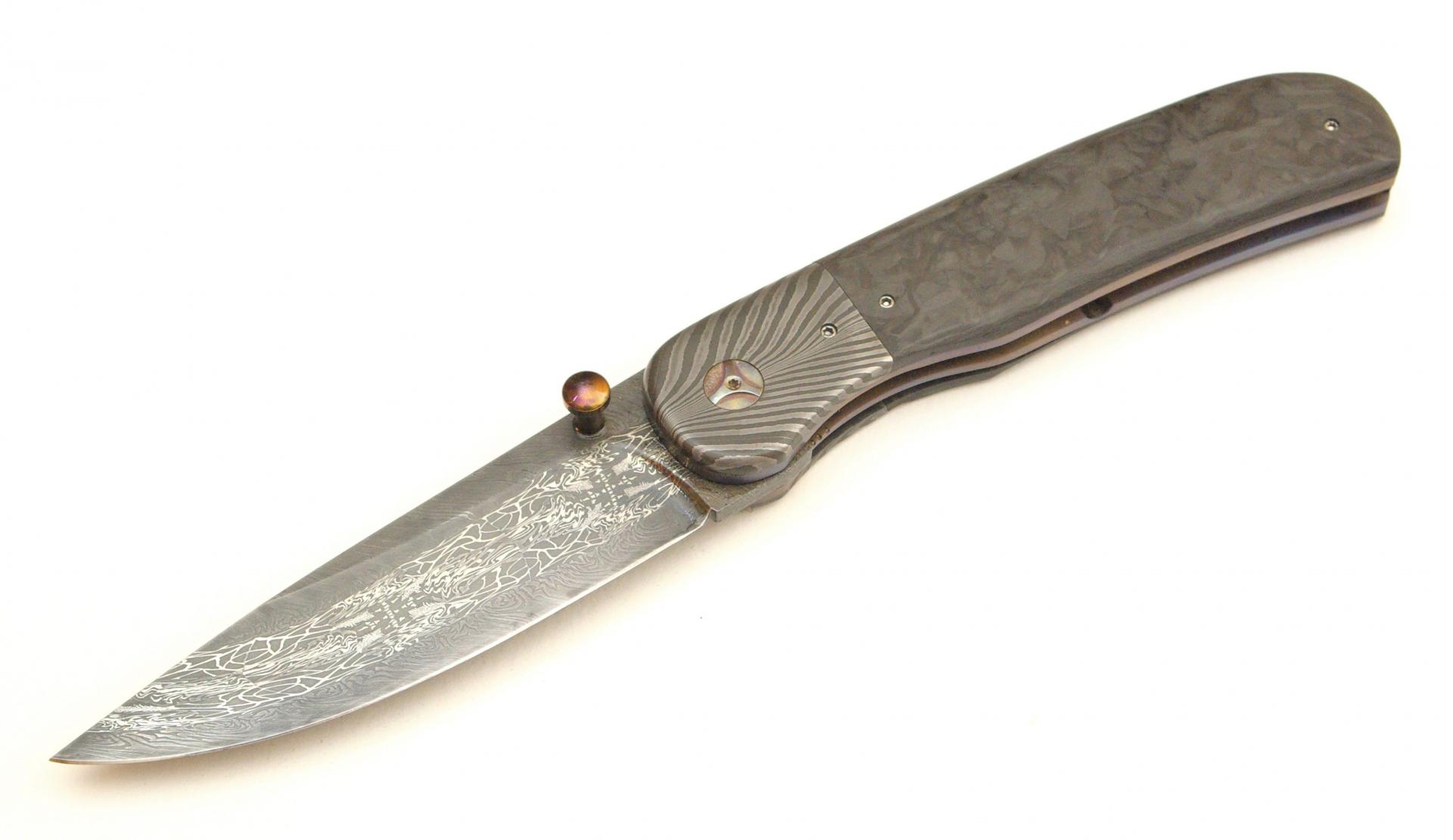 Pieter Annandale usually makes elegant folding knives, but when opened, this liner lock folder measures
an impressive 25 cm. The blade is Gregg Mosaic Damascus, the bolster is feather Damascus and the
handle is Marble Carbon Fibre. The blade has an IKBS ball bearing system.

The ‘Findus’ is a frame lock folding knife by Belgian maker Simen Stryckers. The blade is 1.4528 steel;
the handle is Al6V4 titanium. The knife has blue anodized accents. 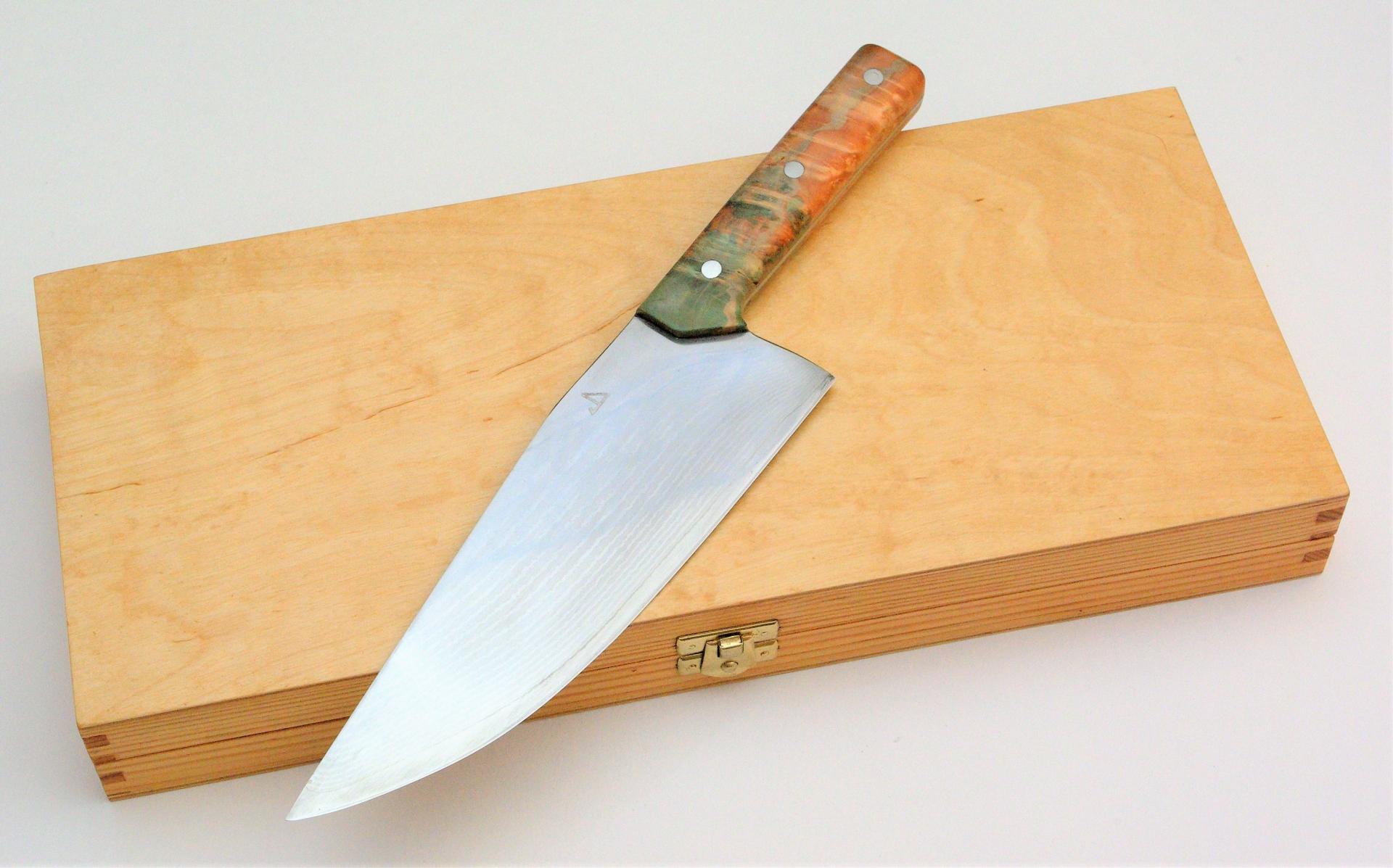 A Chef’s knife by Belgian maker Jan Dox. The blade is 67 layers Suminagashi, with a VG10 core. The
handle is made of stabilised and coloured wood. The blade has an angled spine so that cut meat or
vegetables can easily be slid in the pan, without burdening the edge of the knife. The length of the blade
is 200 mm. 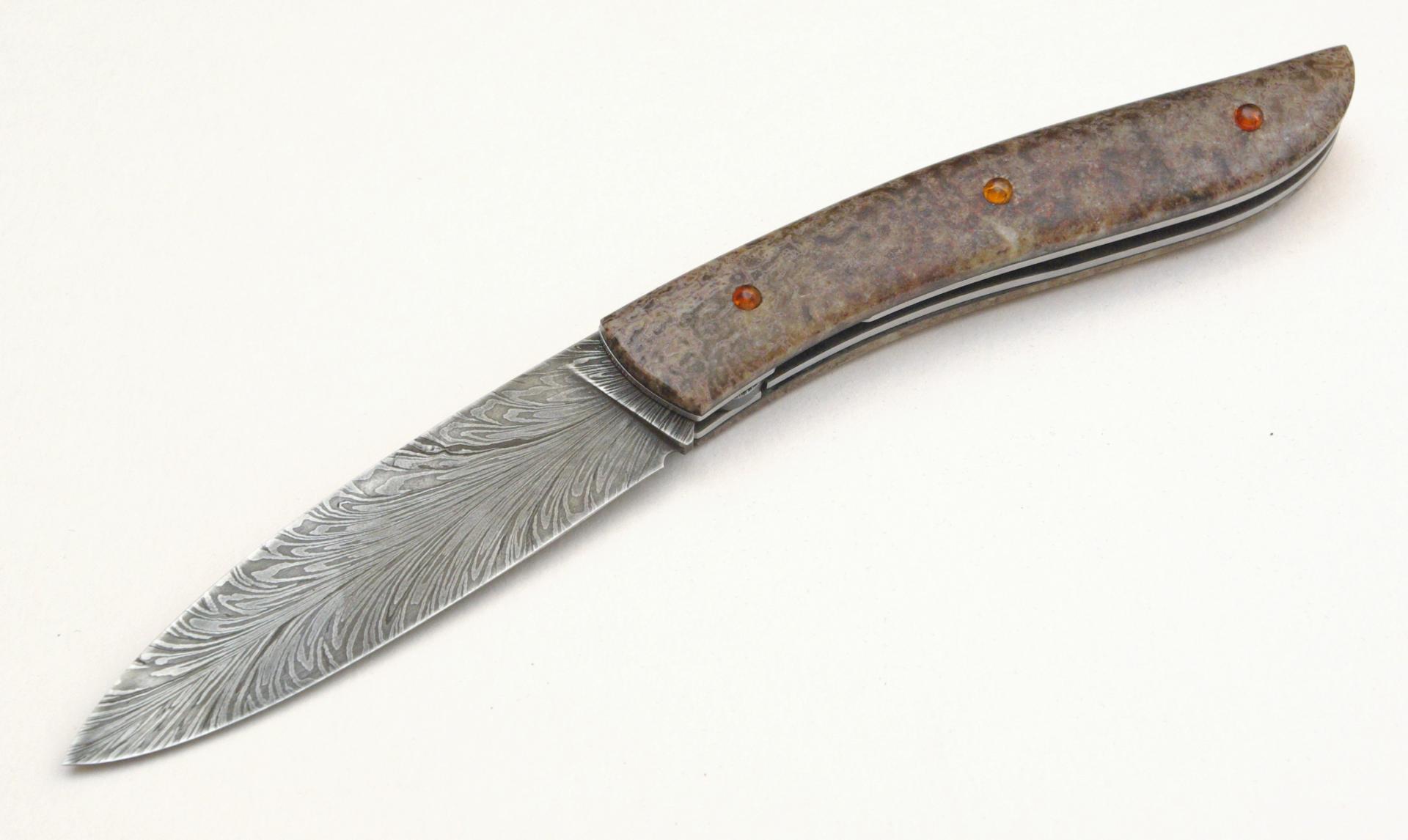 A liner lock folding knife by Tim Bernard (Ateleir Névé). The knife has a feather Damascus blade and handles
of 150 million old dinosaur bones with amber inlays. The backspacer is meteorite. 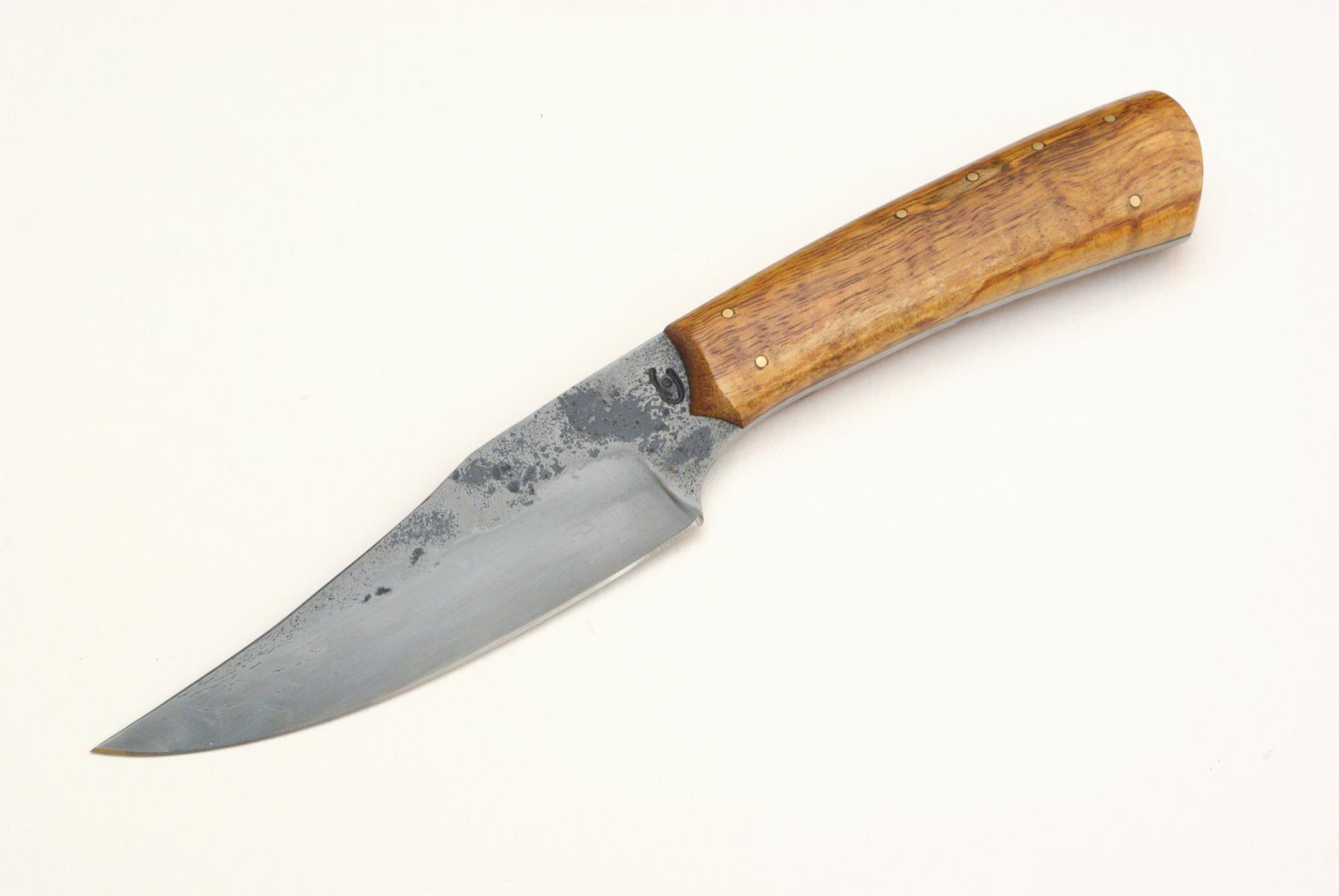 A fixed blade by Belgian maker Jos Wouters. The knife is made of 5160 steel with a handle of Wild Mango
wood. The overall length is ca. 25 cm.

A ‘Chinese Framelock’ by Belgian knife maker Filip de Leeuw. The blade is made of LC 200 N steel, the
handle is Superconductor and Zirconium. The lanyard has a lion’s tailbone. 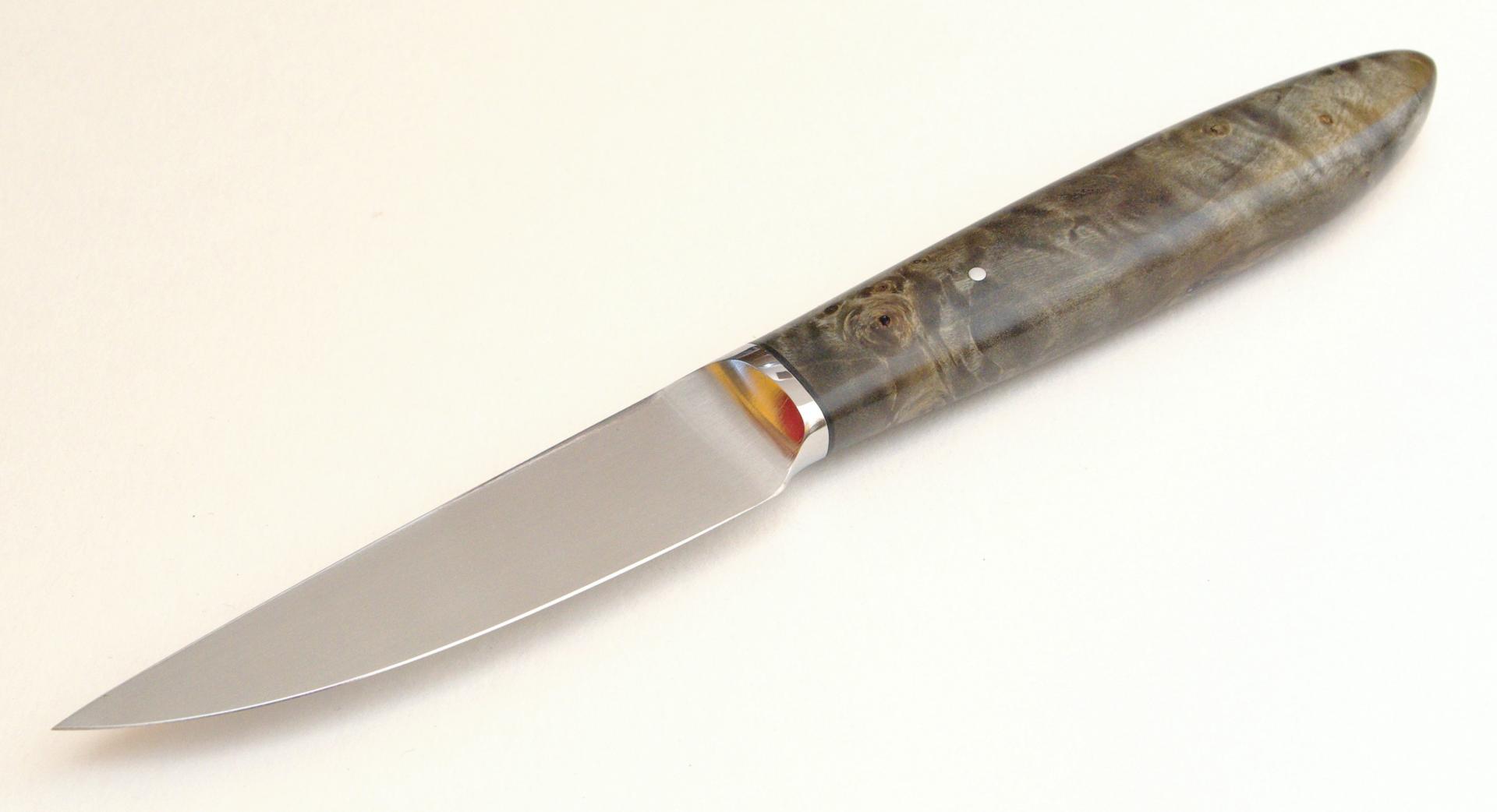 Knife makers can go to extremes, but they can also make something simple like this elegant integral table
knife, by Dutchman Peter van Es. The blade is O1/12510, the handle is stabilised chestnut. The length of
the knife is 210 mm. 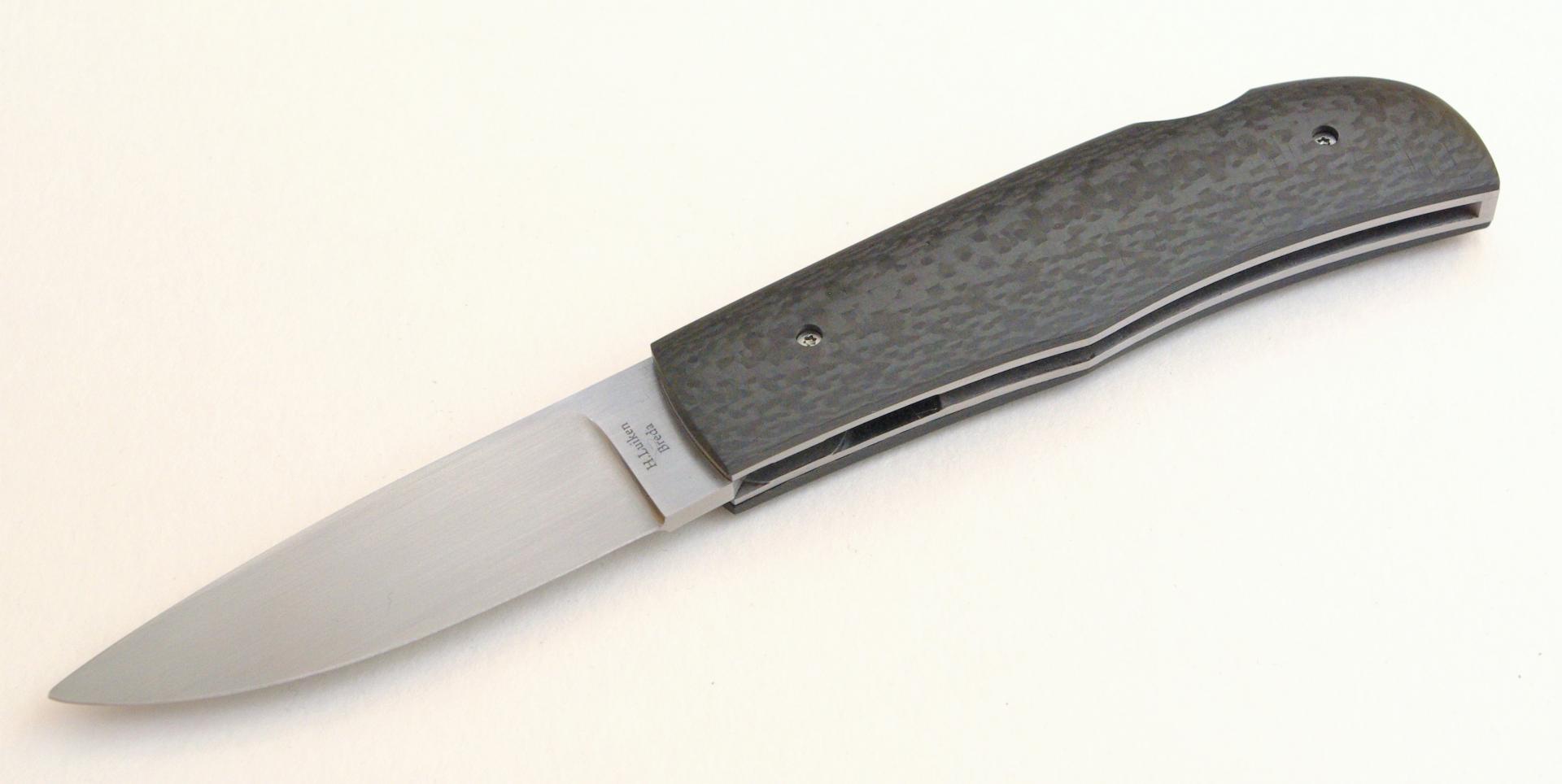 Dutch knife maker Hans Luiken named this back lock folder ‘The Mol’. We will not translate that, because
it’s the name of the client who ordered it. The blade is RWL34, the handles are Diskin Carbon Fibre. 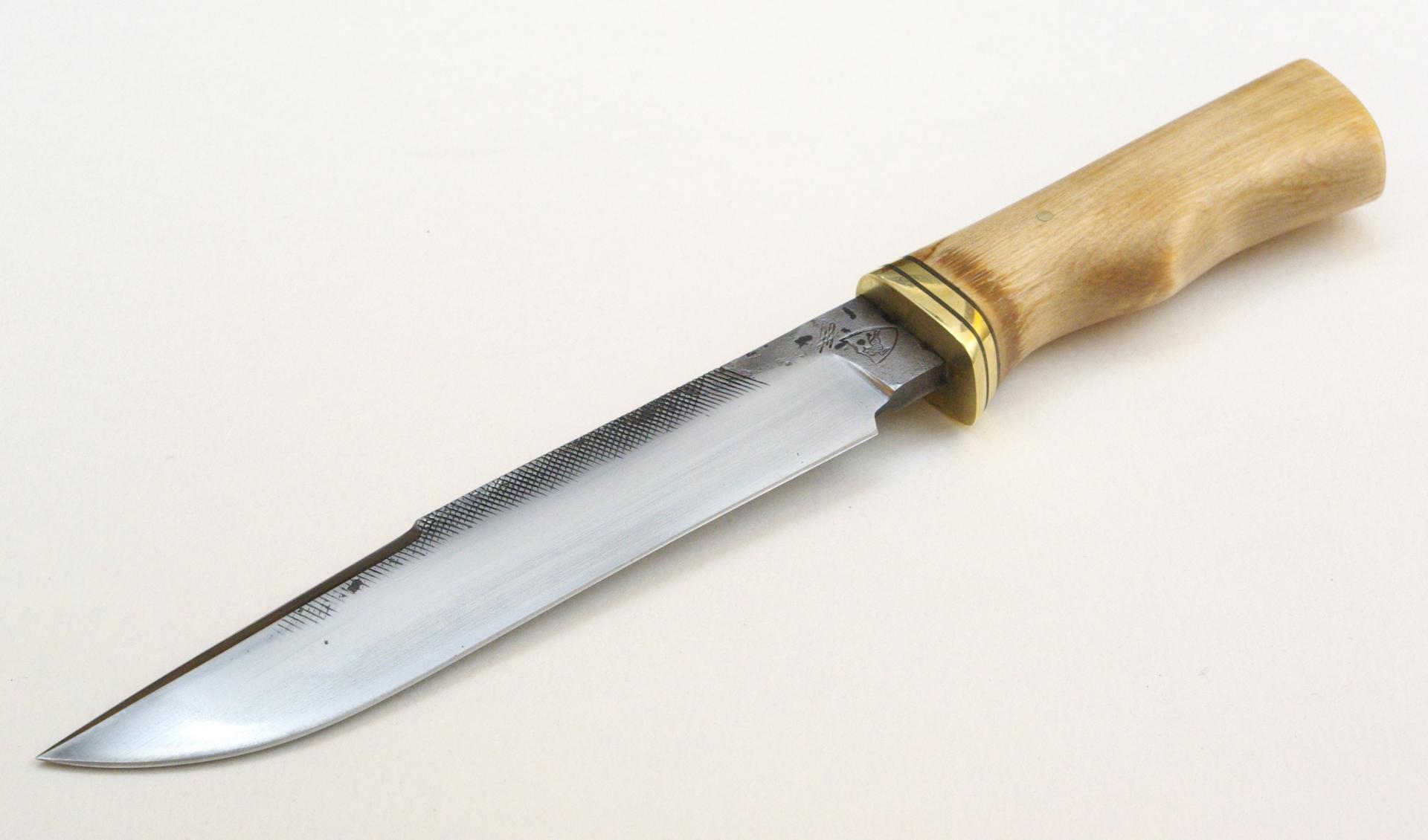 A hunting knife by French maker Jean-Yves Drouard. The bade is made from an old file, the handle is
Maple wood. 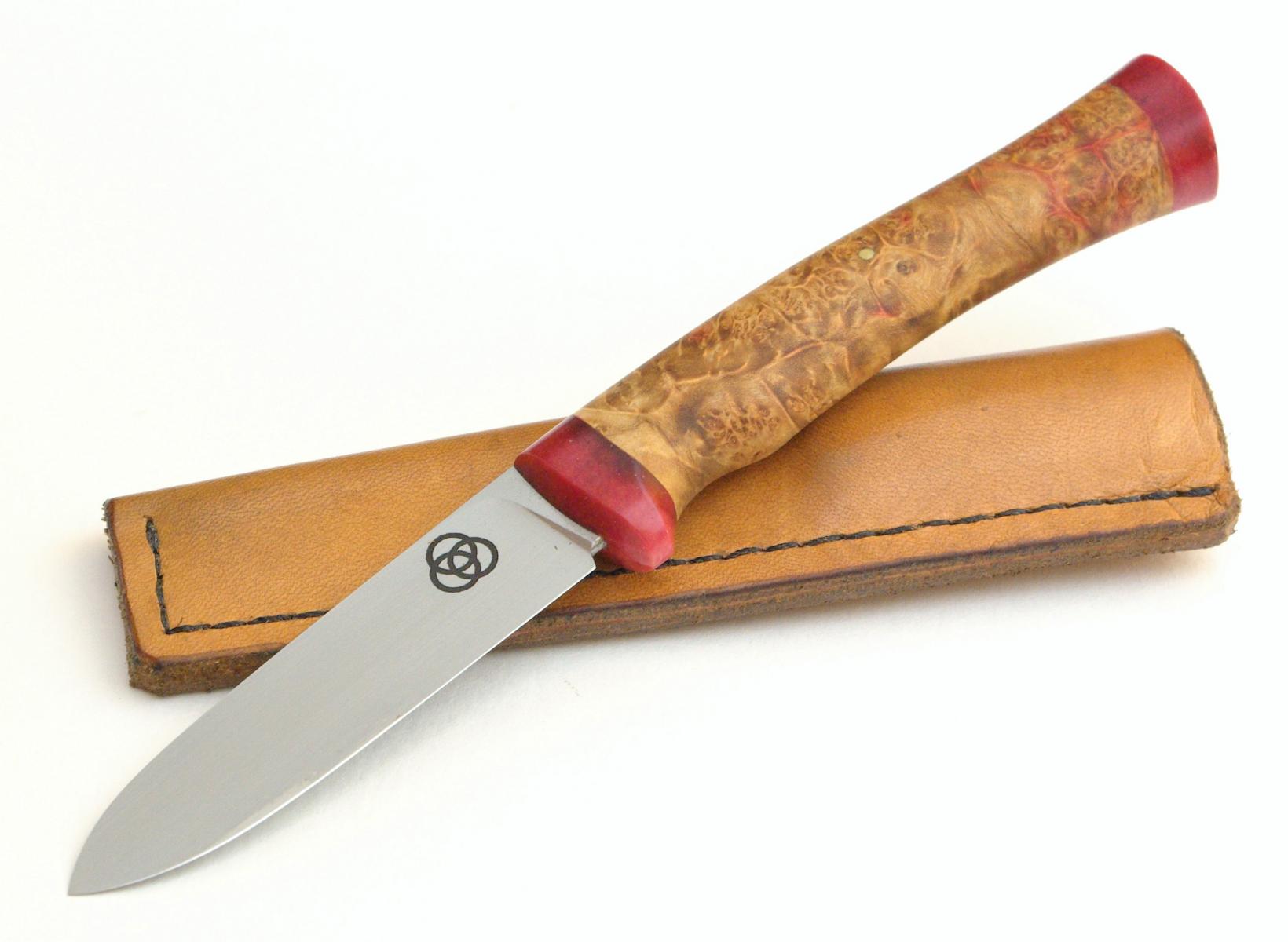 Belgian knife maker Maarten Stryckers made this ‘Kindermes’ (Child’s knife). It is name so, because it is
based on a knife that Maarten had as a kid. The blade on this one is D2, and the handle is made of stabilized
wood and coloured giraffe bone.

The Coutellerie d’Art Jacques Mongin is a French company with several knife makers, specializing in high
quality traditional models. This ‘Cornillon Damas 18’ is an impressive example. The name refers to the
model, the homemade Damascus of the blade, and the blade length of 18 cm. The handle is deer antler. 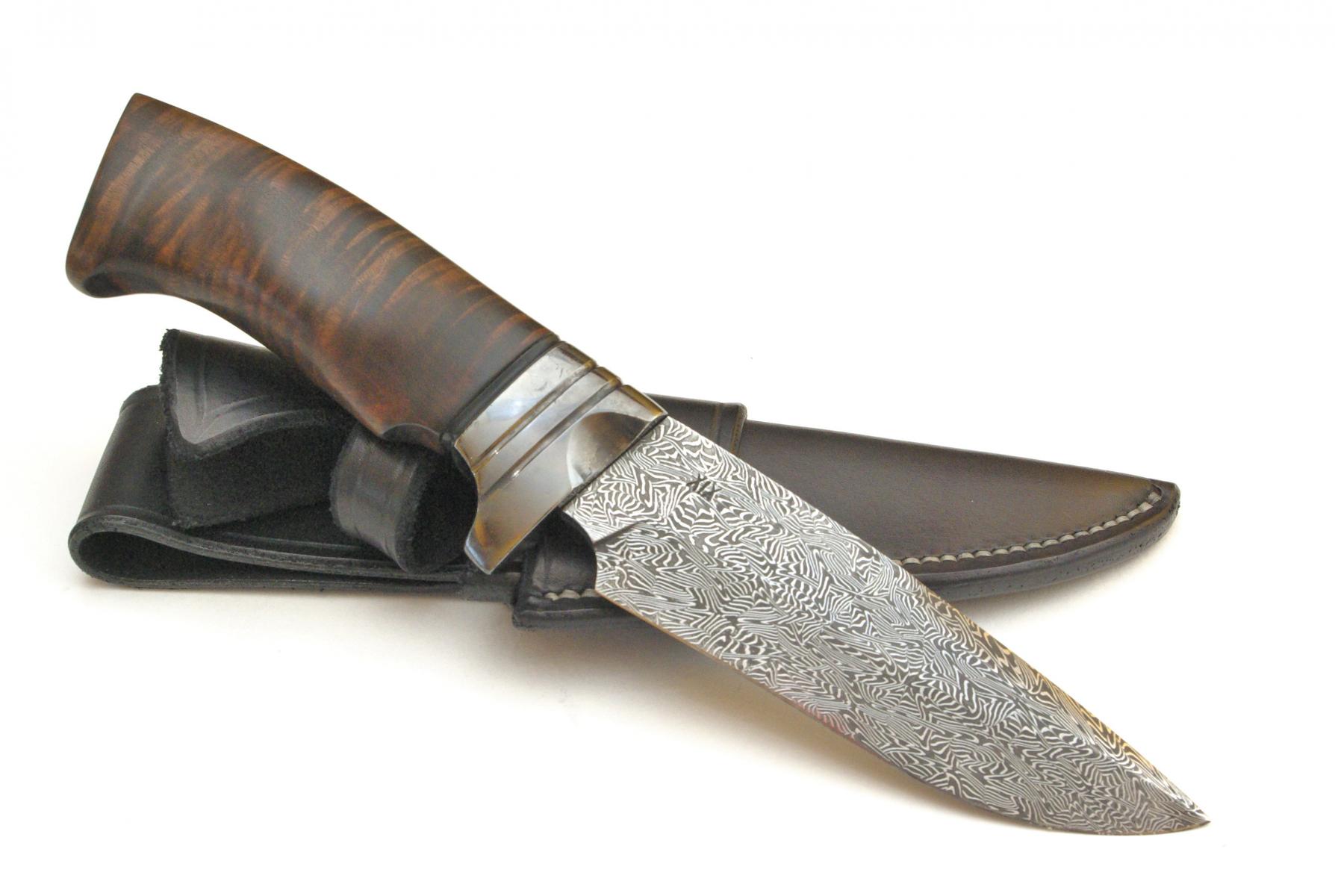 French knife maker Silvain Dixneuf did not have too much trouble finding a suitable logo. Since his family
name translates as ‘nineteen’, he choose the Roman numerals XIX to put on his blades. This example is
made of 90mcv8 / 15N20 Damascus, with an iron guard and a curly Gidgee (Acacia) handle. Silvain Dixneuf
won the René Bol award to the best newcomer. 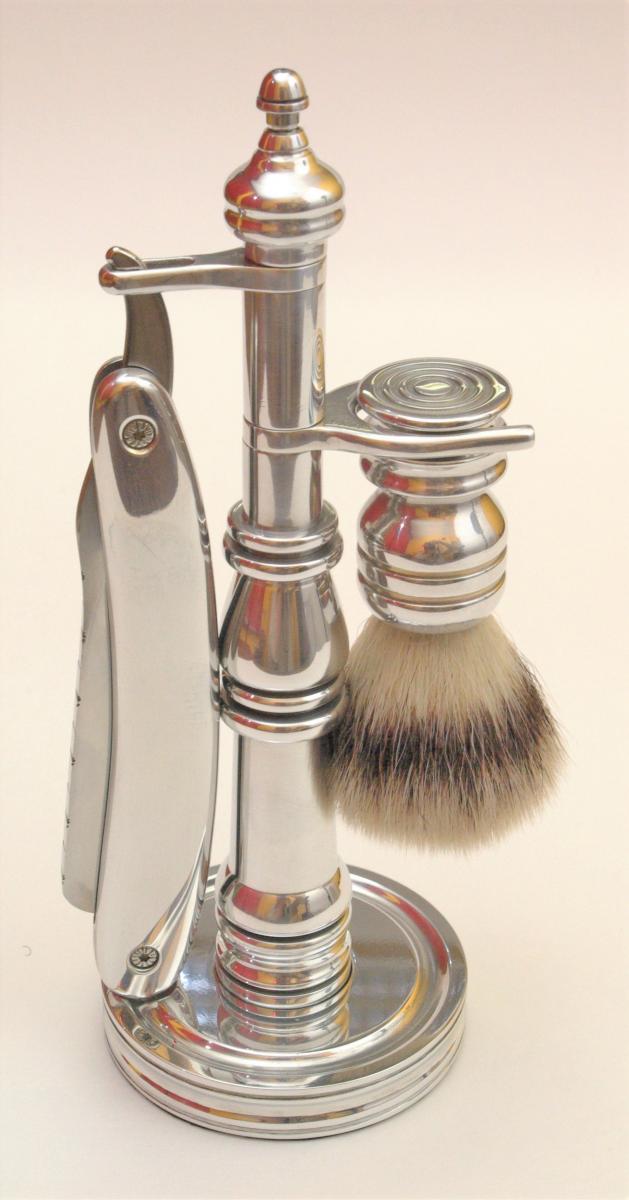 Dutch knife maker Aad van Rijswijk (AvR knives) has made shaving sets before, and from time to time
returns to the theme. In Gembloux, he presented this aluminium prototype. The razor has an ATS34 blade,
the shaving brush has badger hair. 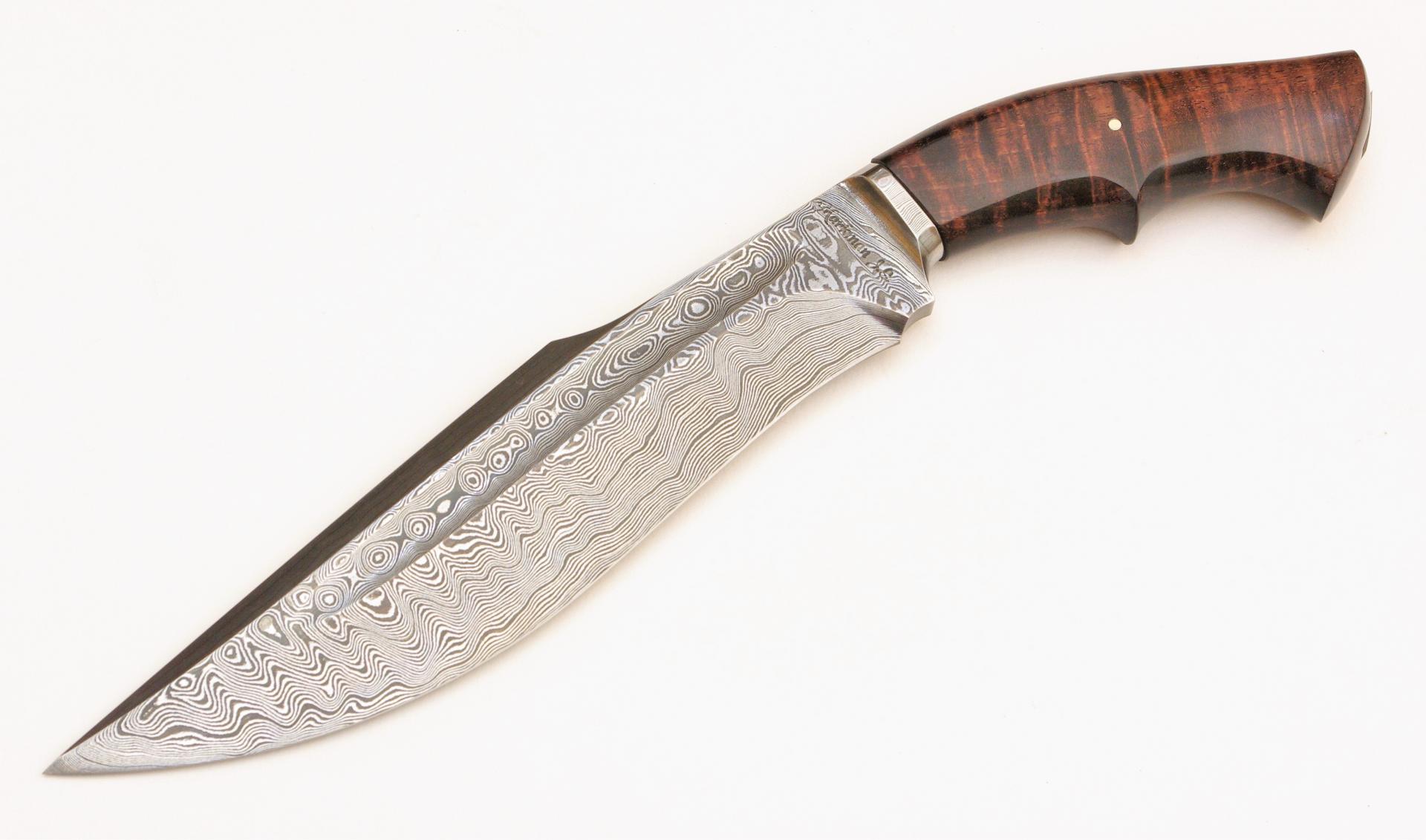 The Gurkha’s may have been delighted with this Khukri by Dutch knife maker Eric Markman. The 28 cm
blade is 1.2842 / 75ni8 Damascus. The handle is Tasmanian Blackwood. 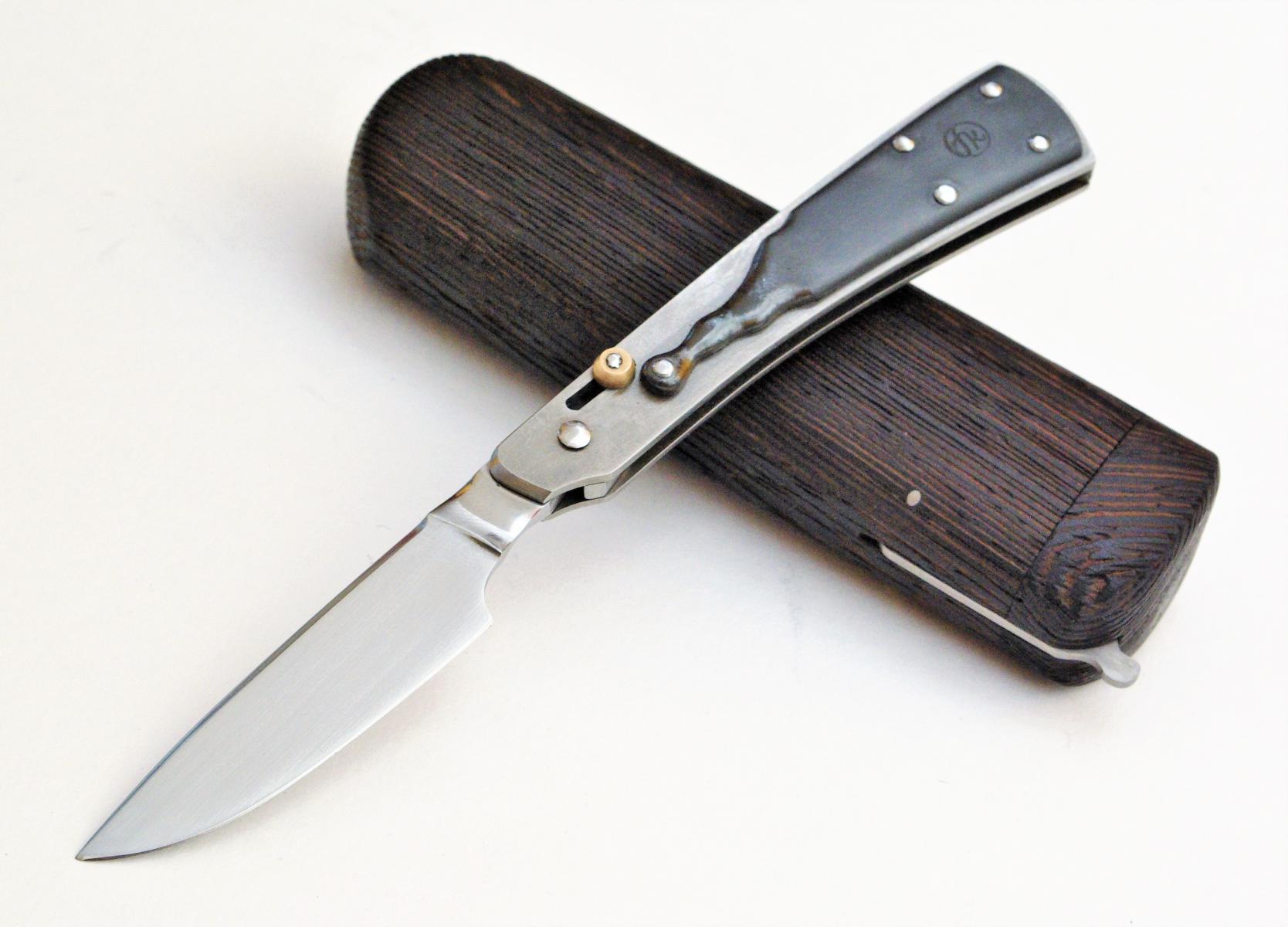 Czech knife maker Filip Koruta (Fildas Knives) showed this ‘Dr. Hannibal Lector’ in Gembloux. The knife
is full of surprises, but we forgot to take a picture of the most important one: a small titanium fork, hidden
in the back of the right handle scale. The blade is RWL34, the handle materials are Titanium and Zirconium.
The blade has a sliding locking bar, and the knife can be hidden in a wooden container with a pivoting lid. 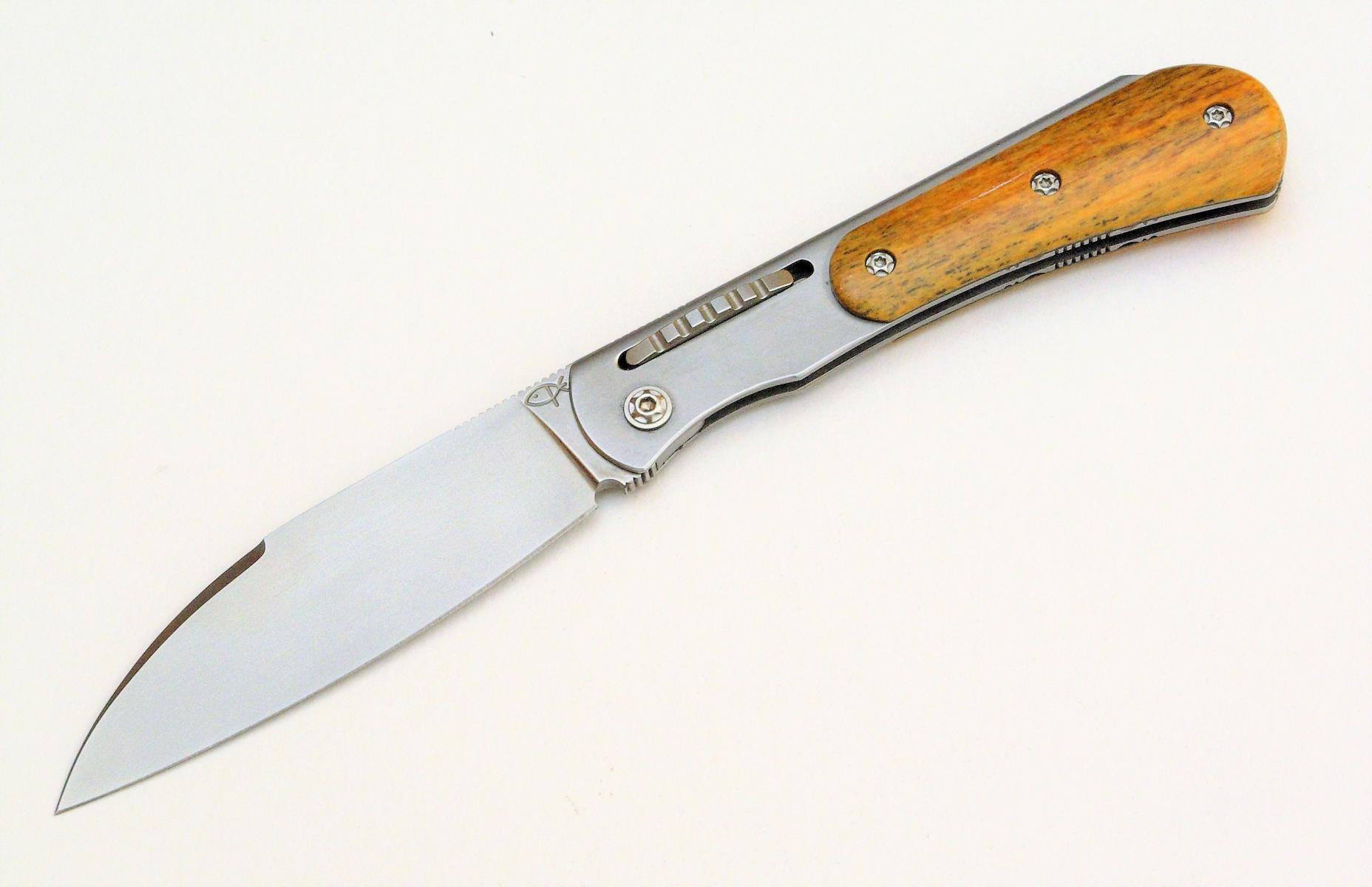 The Fox by Belgian maker Eric Parmentier is a ‘Zip lock’ knife. The blade is 14C28N and the handle is
giraffe bone. 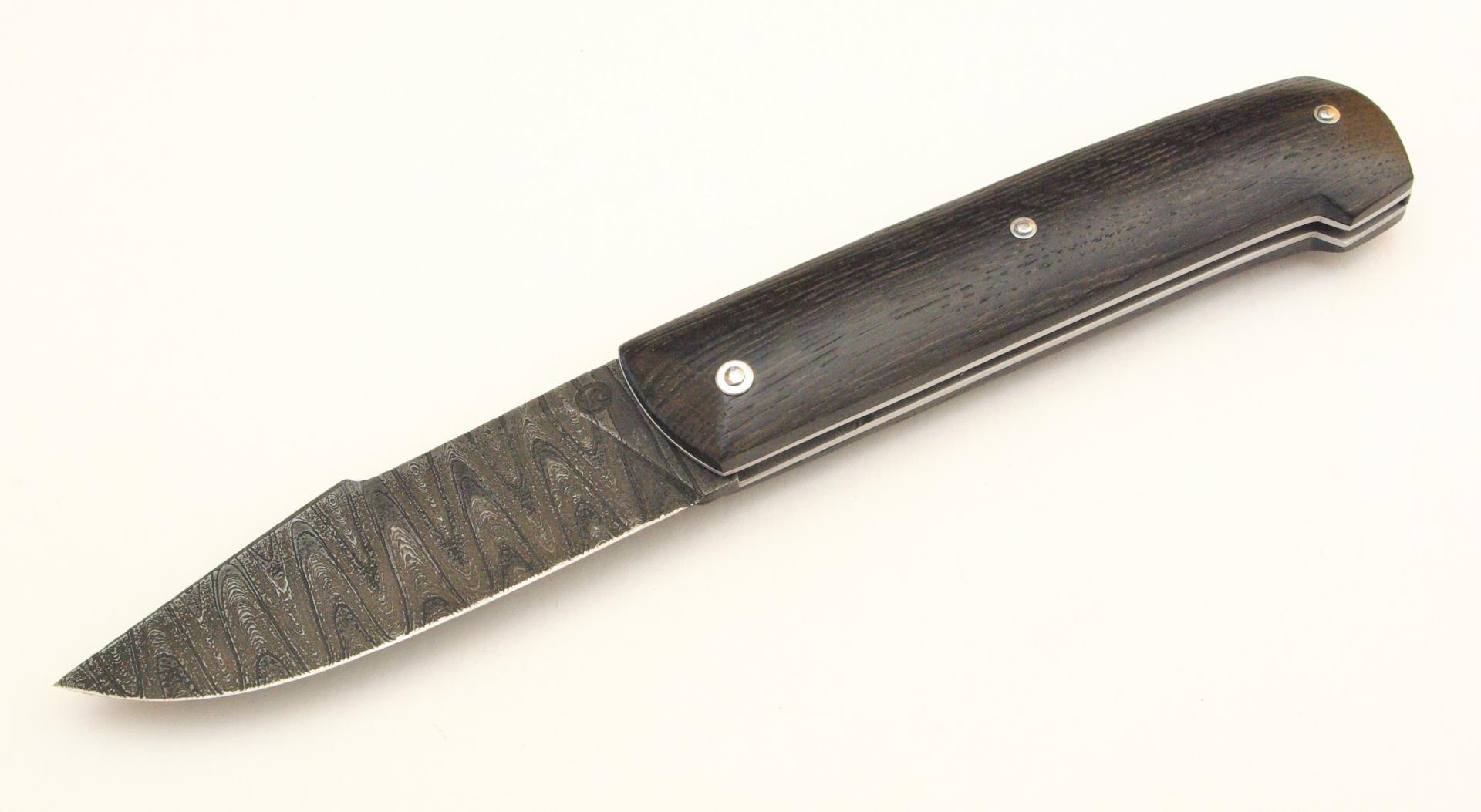 A folding knife by French maker Louis Blanchet Kapnist. The blade is 90mcv8 / 15N20 Damascus, the
handle is Morta (bog-wood). 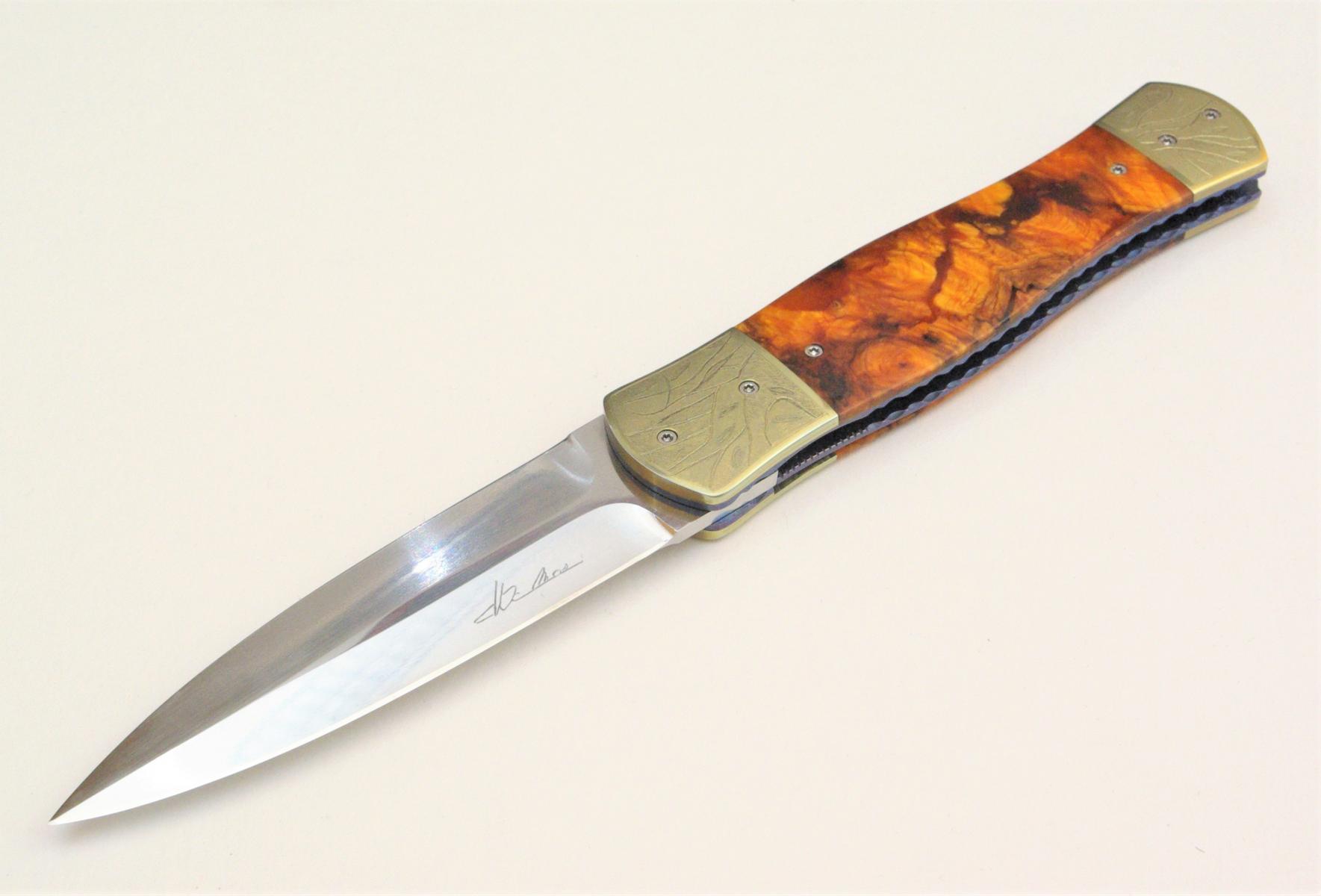 The model 10-01 liner lock Chestnut dagger by Belgian knife maker Willy de Man. The first number is the
year in which the knife was made, in this case the tenth year that De Man makes knives. The second
number refers to the model. De blade steel is Niolox, the bolster anodised and structured titanium and
the handle is stabilized Chestnut. The overall length is 235 mm. 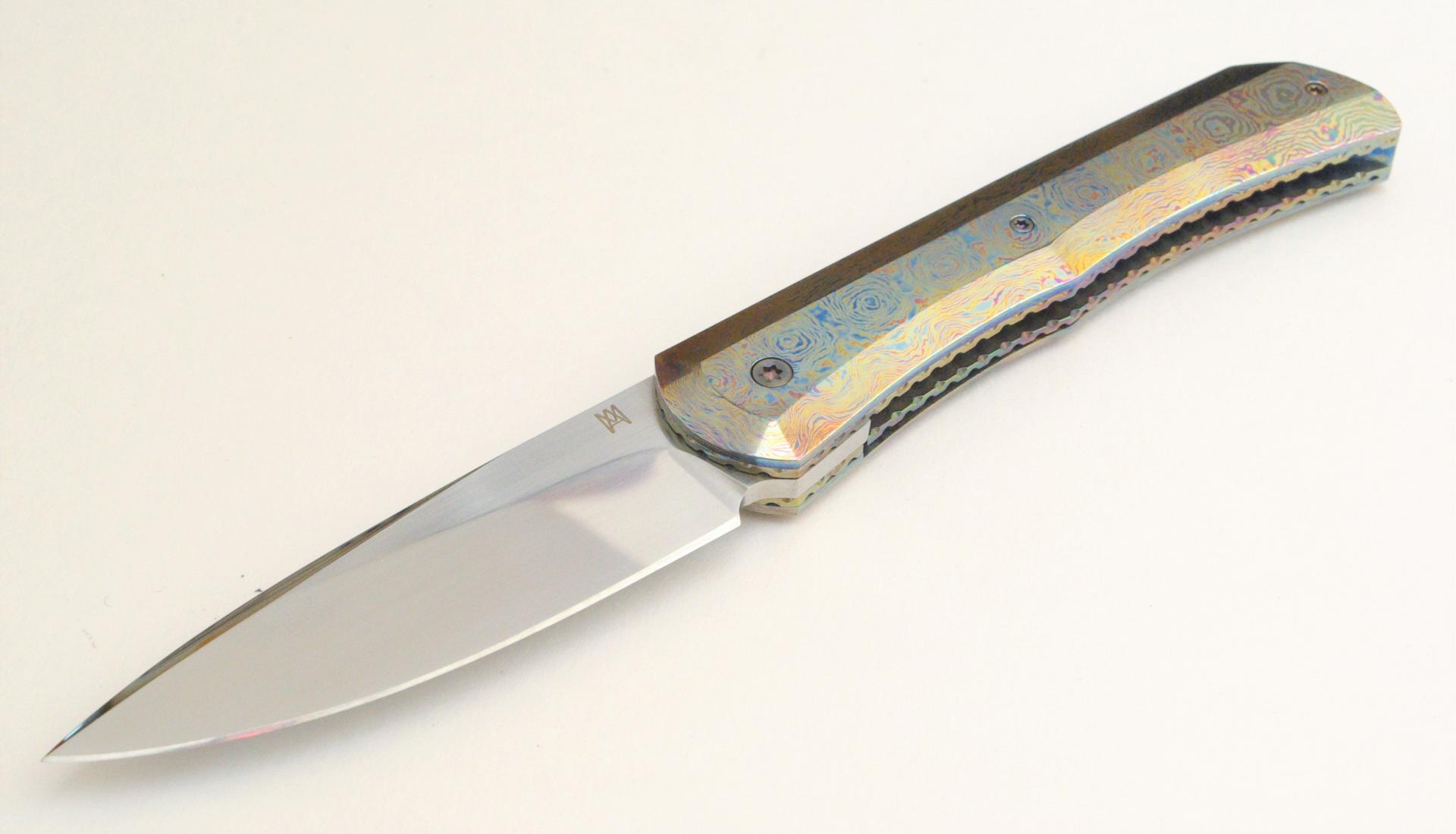 Dutchman Martin Annegarn made this front flipper liner lock, model ‘Lancet’. The 80 mm RWL34 blade
rotates on ceramic balls. The handle is Timascus with titanium liners and spacer. The liners and spacer
have file work.

Work in progress by Albert van den Heuvel (Hill Knives): a double-edged hunting knife made from N690 Extra steel, with an overall length of 395 mm. The present handle scales are Woodmicarta, but will be replaced by ones from fossil Mammoth ivory. There will be extensive engraving and a handmade leather sheath as well, but that may take at least six more months.