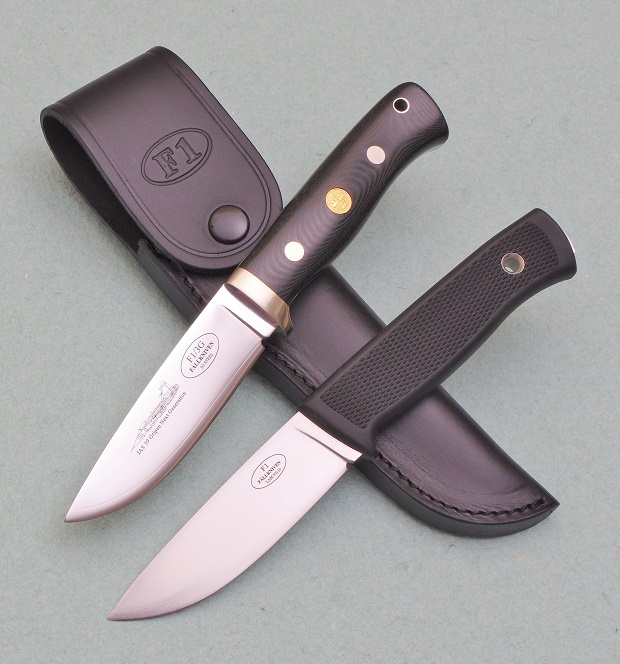 The F1LG3mm JAS Next Generation (left), compared to the
‘normal’ F1.

How much information should you put in a name? Well, according to the Swedish Fällkniven quite a lot. This knife is called the F1L3Gmm JAS Next Generation – and it’s an attempt to tell the whole story.

The Fällkniven F1 probably needs little introduction. The knife was adopted in 1995 by the Swedish Air Force as the F1 Pilot Survival Knife. It was introduced to the civilian market the following year. Its instant success made it possible for Fällkniven to concentrate on products that were developed in-house, instead of selling other brands. The F1 firmly established the company name.
Although the basic design of the F1 has remained relatively unchanged, the blade has been upgraded, from the initial ATS34, through VG10, up to the current 3G powder steel. Like all Fällkniven fixed blades, the F1 is made by Hattori in Seki City, Japan.
In the past few years, Fällkniven has introduced several limited-edition commemorative versions of the F1. The F1LG3mm JAS Next Generation is the latest. The left side of the blade is laser-engraved with an image of the Swedish Saab JAS39 Griffin Next Generation fighter aircraft, also known as Gripen E, which completed its first flight in 2017.
The F1L3Gmm JAS is a slightly modified version of the F1L3Ggm special edition of which only a thousand have been produced to celebrate Fällkniven’s 30 years in the knife business. The ‘gm’ had green micarta handles, whereas the ‘mm’ has handles made of maroon or black micarta. The new model features a polished blade and a nickel silver guard. Inset in the handle is the three-crown medallion, made of nickel silver with a gold plating. The tubular rivet and handle rivets are made of nickel silver as well, and the knife comes in a wooden box for presentation with a black leather sheath.
According to Fällkniven the exact amount made still must be determined. The company started with one hundred pieces of the maroon micarta and black micarta each, which makes them interesting collectors’ items.