A unique exhibition in Solingen shows the history and development of the European cutlery industry during the last 120 years, with a wealth of detail and an impressive amount of information. 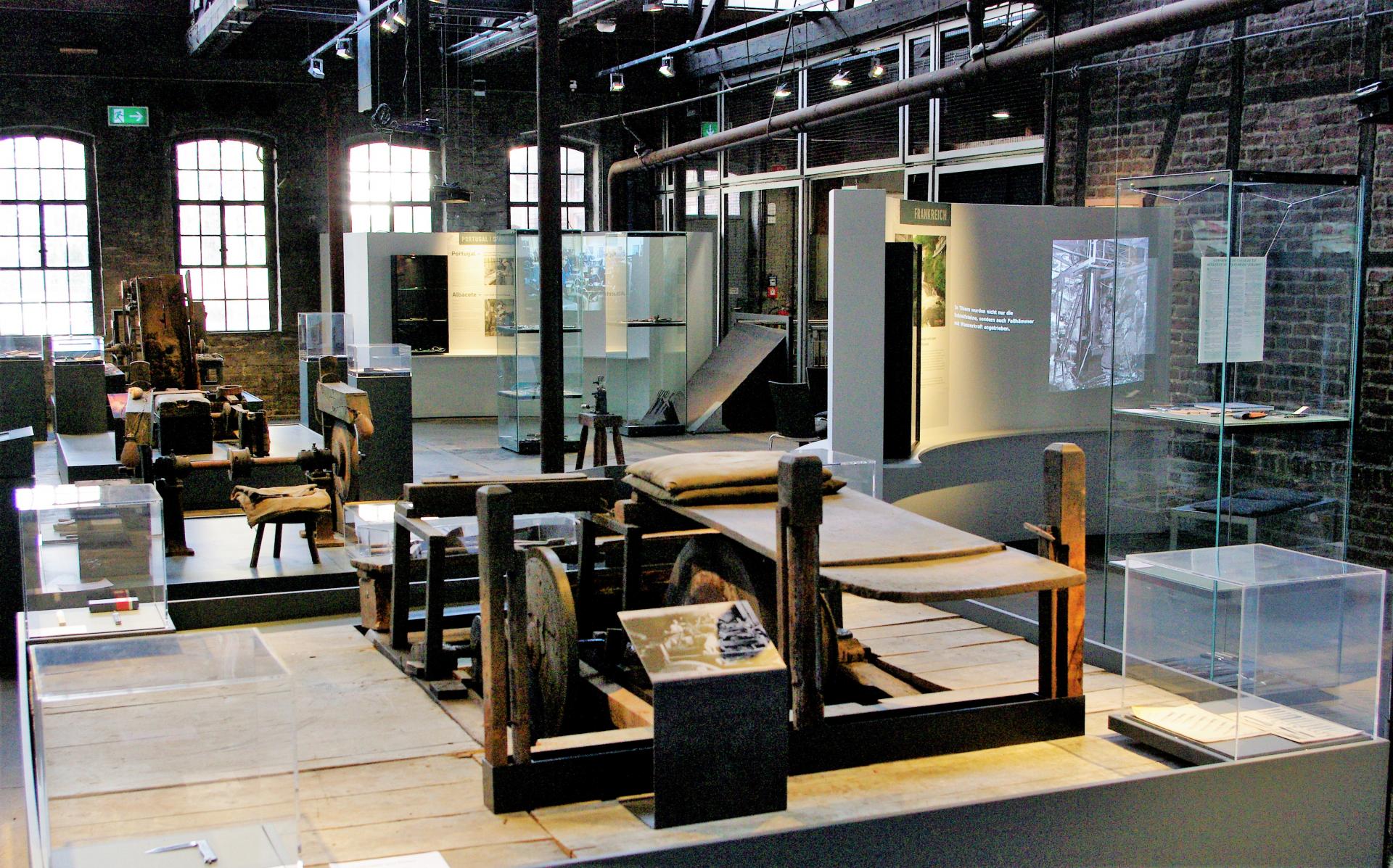 A view of the exhibition ‘Tradition and Passion’ in Solingen.

The exhibition takes up just one big room in the LVR Industriemuseum (Industrial Museum) in Solingen, Germany, but nonetheless leaves you speechless. ‘Tradition und Leidenschaft. Schneidwarenindustrie in Europa’ (Tradition and Passion. Cutlery Industry in Europe) present a concise history of one of Europe’s oldest industries, focussing on 21 centres of cutlery and blade-making in nine European countries: Great-Britain, Germany, Belgium, Austria, Switzerland, Italy, France, Spain and Portugal.
The exhibition doubles as a farewell for Dr. Jochem Putsch, founder of the LVR Industriemuseum, who retired on March 1 this year. Dr. Putsch got the idea for the museum after a visit to Thiers and its then recently opened Musée de la coutellerie in the early 1980s. He wanted a museum closely tied to the local industry, a museum which also produced. The Industriemuseum opened its doors in 1999, in the buildings of the Gesenkschmiede (drop forge) Heinrichs. That company was established in 1886 and existed until 1986. Its main product were scissors. It had a steam-driven grinding shop, with enough capacity for local craftsmen to rent a place to grind. The interior of the factory has remained largely intact, including machines, tools, moulds and templates. An important eye-catcher are the thousands of scissors in all sizes, part of the former factory stock. 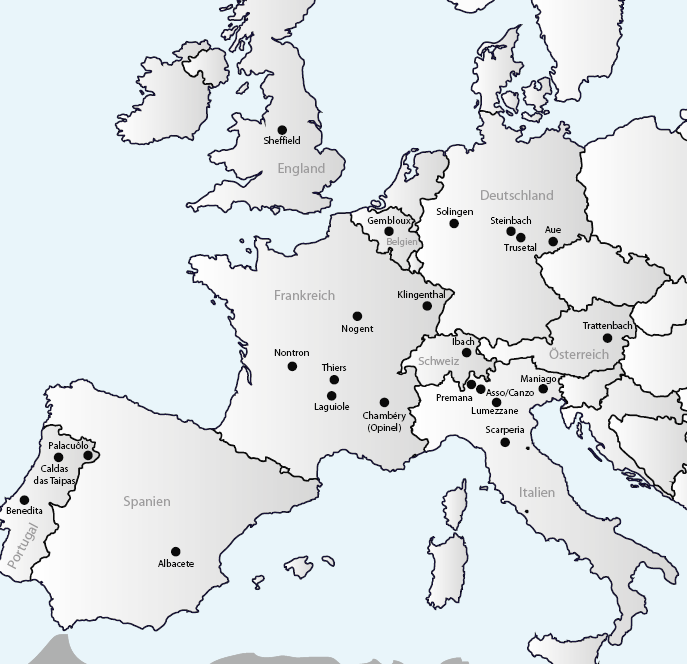 Left: Dr. Jochem Putsch, founder of the Industriemuseum. The exhibition ‘Tradition and Passion’ was his farewell,
just prior to his retirement.
Right: Knife Centres in Europe. All these are dealt with in the exhibition. (Picture from the exhibition catalogue)

Three periods
The starting point of the exhibition is 1898, the publication year of the monumental, 2,000-page, six-volume work of Frenchman Camille Pagé, titled “La coutellerie depuis l’Origine jusqu’a nos jours – La Fabrication ancienne et moderne” (The cutlery industry from its origins until the present day – ancient and modern production). Pagé was one of the owners of a cutlery factory near Châtellerault, France, but from 1883 onward, he devoted himself more to his research, writing thousands of letters with questions on blade making to every corner of the world, resulting in an encyclopaedial work covering every conceivable aspect of the industry.
The next reference point are the nineteen nineties, when Dr. Putsch visited all of the European cutlery centres, taking pictures and notes. At the time, that resulted in the impressive publication ‘Schneidwarenindustrie in Europa. Reisen zu den Werkstätten eines alten Gewerbes’ (Cutlery industry in Europe. Travels to the workshops of an ancient trade), written together with Manfred Krause. One volume instead of six, but nonetheless an excellent account of the development of Europe’s cutlery industry.
The final reference point are the years 2016-2018 when, in preparation of the present exhibition, the earlier journey was repeated.

Much of the Industriemuseum is just as it was at the time when drop forge Heinrichs was still operational,
including this collection of samples.

Drop forge Heinrichs mostly made scissors. Shown here are the moulds and some of the thousands of
scissors in all sizes, part of the former factory stock.

‘Passion and Tradition’ features around 700 objects and more than 1500 illustrations, presented either as large projections or on smaller media stations. The exhibition offers not only a detailed insight in the present state of the European cutlery industry, but also in the way in which it has developed over the past 120 years, and the impact that has had on the traditional centers. This leads to some surprising observations: between ca. 1990 and the present day, changes have been at least as fundamental as in the preceding century, leading in some cases to a prospering industry, in other cases to its almost complete decline. 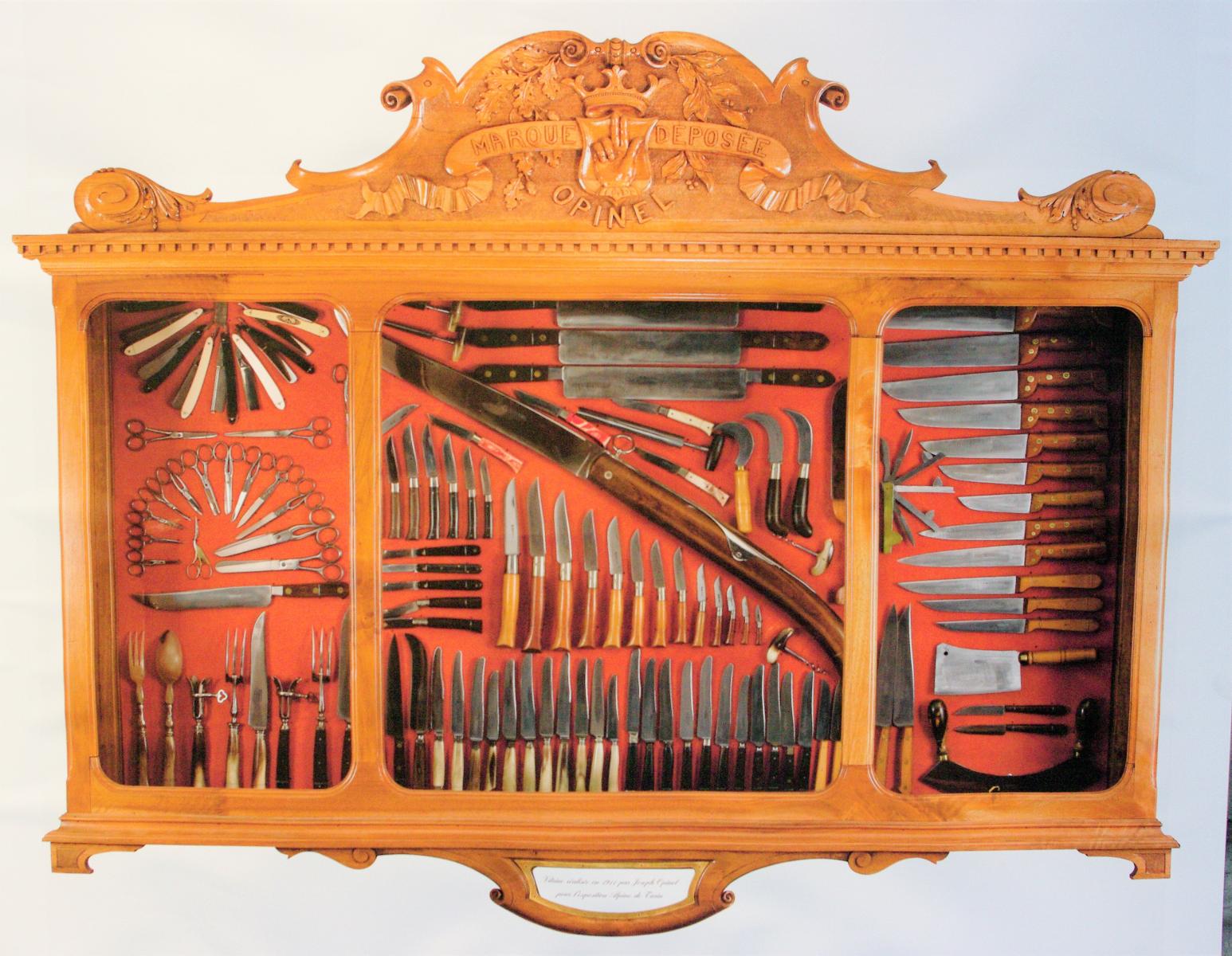 What surprises Dr. Putsch is that there is remarkably little contact between the European centres of the cutlery industry, which he believes could be mutually profitable. He takes a project as ‘Le Thiers’ as an example: the design of a folding knife which became the benchmark of the local knife industry. According to Putsch, Solingen should have done something similar thirty years ago.
‘Passion and Tradition’ is like an adventurous journey. At every corner there is a surprise and at the end you realise that there is still much more to discover. The exhibition in Solingen can be seen until June 30 of this year. We heartily recommend it.

Karl Elsner III, grandson of the Victorinox founder, in front of the first workshop. (Picture from the exhibition
catalogue) 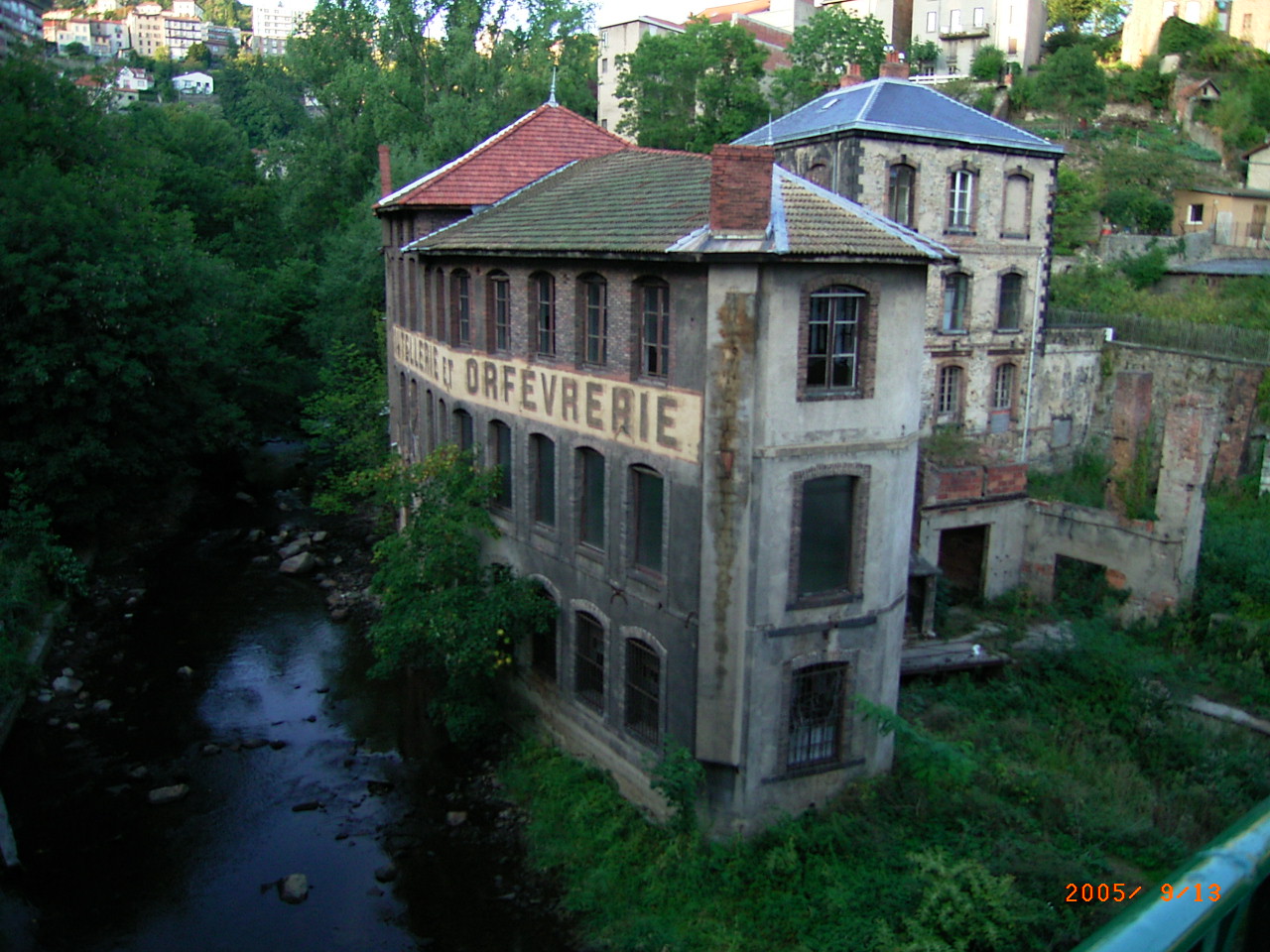 Some of the many deserted industrial building at the banks of the Durolle river in Thiers, 2005. (Picture
from the exhibition catalogue) 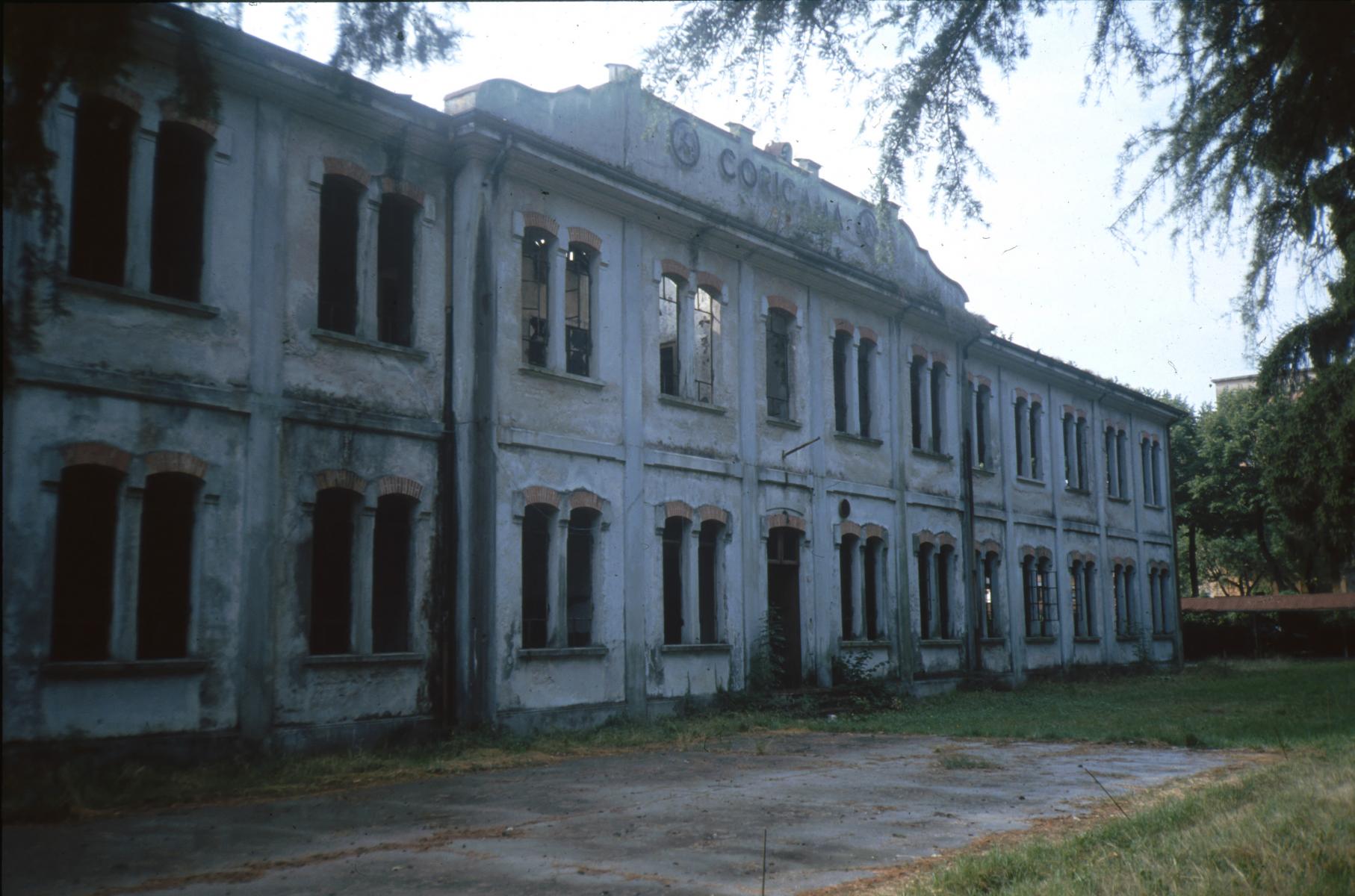 In 1991, the building of the Coricama company in Maniago, Italy, was completely neglected. Nowadays it
houses a beautiful cutlery museum. (Picture from the exhibition catalogue)
Our sponsors
Advertisements
Dit is een geprinte versie van de publicatie op