What started as a knife show for a forgotten part of France, has rapidly developed into an international gathering of knife enthusiasts. The third edition of the European Knife Show (EKS) in Strasbourg saw a 30% rise in visitors and an wide variety of knife makers. 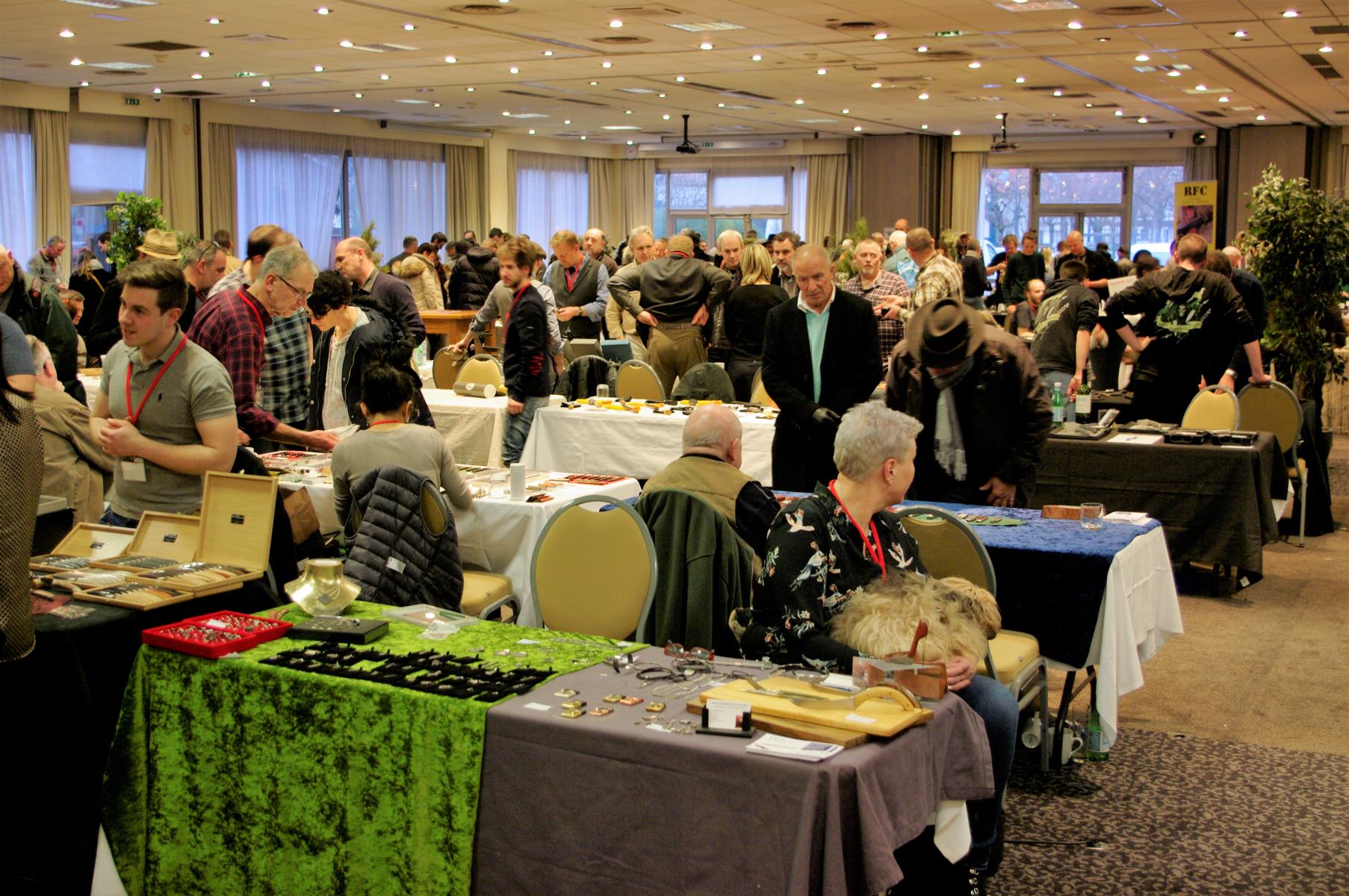 A part of the show floor at a quiet moment.
With some 70 tables and 900 visitors (a 30% increase compared to last year), the third edition of Euro Knife, as the European custom knife show in Strasbourg is briefly called, is clearly on the right path. The show is becoming ‘a place to be’ for knife makers. It is difficult to determine why exactly, but the relaxed atmosphere, varied offering and well-lit venue all play a part.
The creativity and variety in styles made a visit to the show a very agreeable one. There was something for everyone, from classic to modern, austere to exuberant, mostly made with a high level of craftsmanship. . The pictures will give an impression. 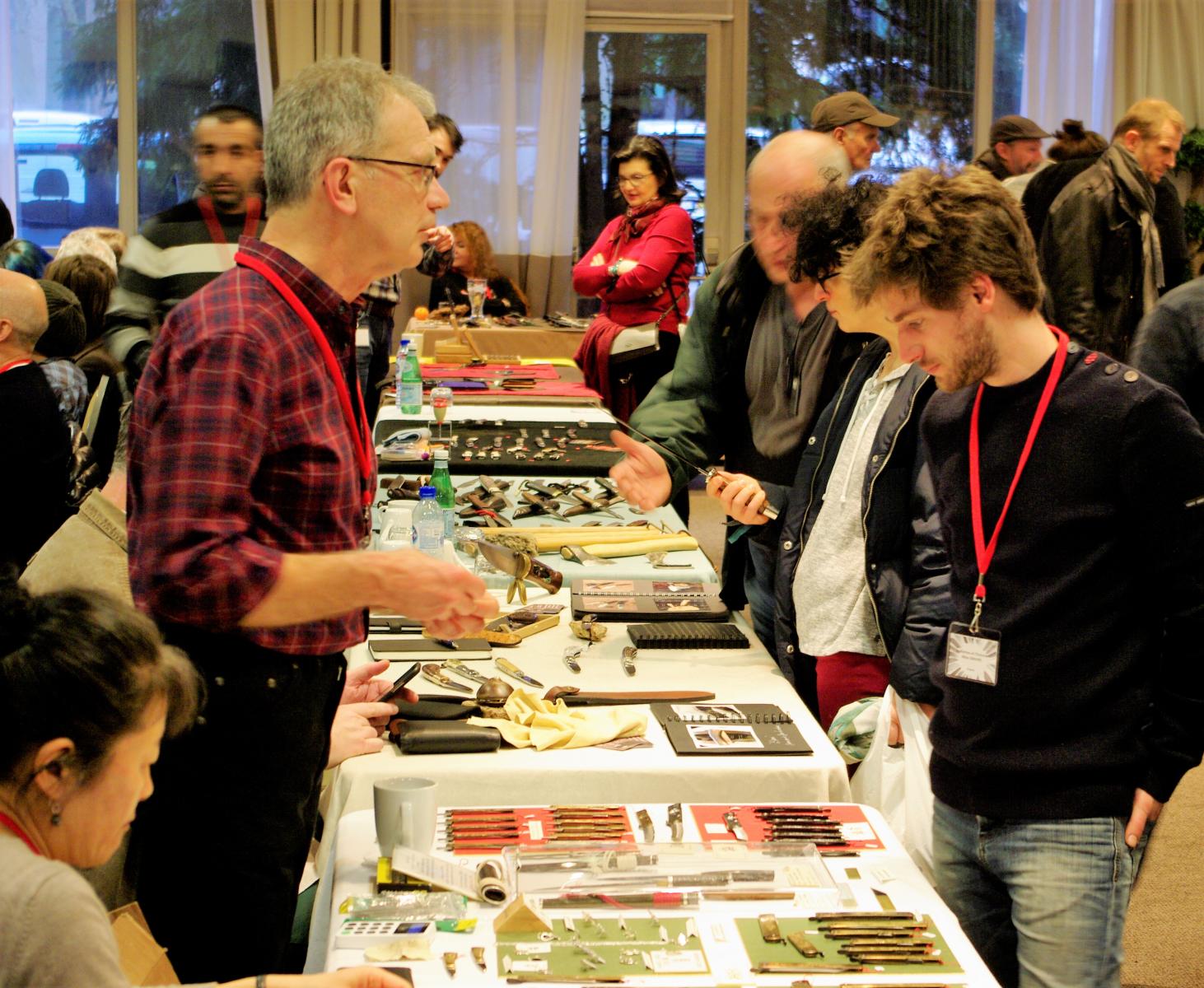 Left: One of the attractions of a knife show is that you can meet the makers.
Right: Ellia Jouveaux is a French knife maker and scrimshaw artist. She made this piece of work on the
crown of a deer antler.
Although the hall is nearing the limits of its capacity, organiser Gregory Pohl for the moment has decided to stay at the Hotel Mercure – Palais des Congres. His aim are 1500 visitors for the two-day show, and more bigger names, before deciding on any changes. Finnish knife makers Pekka Tuominen, Jukka Hankala and Pasi Jaakonaho have already promised to come for the next show.
The 2020 edition will be held on Februari 1 and 2. European Blades Mag. will keep you informed, but those curious can also have a look at www.euroknifeshow.com or on their Facebook page at Euroknifeshow.

Russian maker Alexandr Marouchin (Master forge) made this ‘Chasseur’ (Hunter). The 145 mm blade is
Damascus, the handle is horn with scrimshaw.

Corsican knife maker Alexandre Musso showed this linerlock folding knife, with an Inox blade and a
striking handle made of resin with an original design by Gabrielle Kergrohe-Masson from G2L. The letters
spell ‘Langouste’ (Lobster). 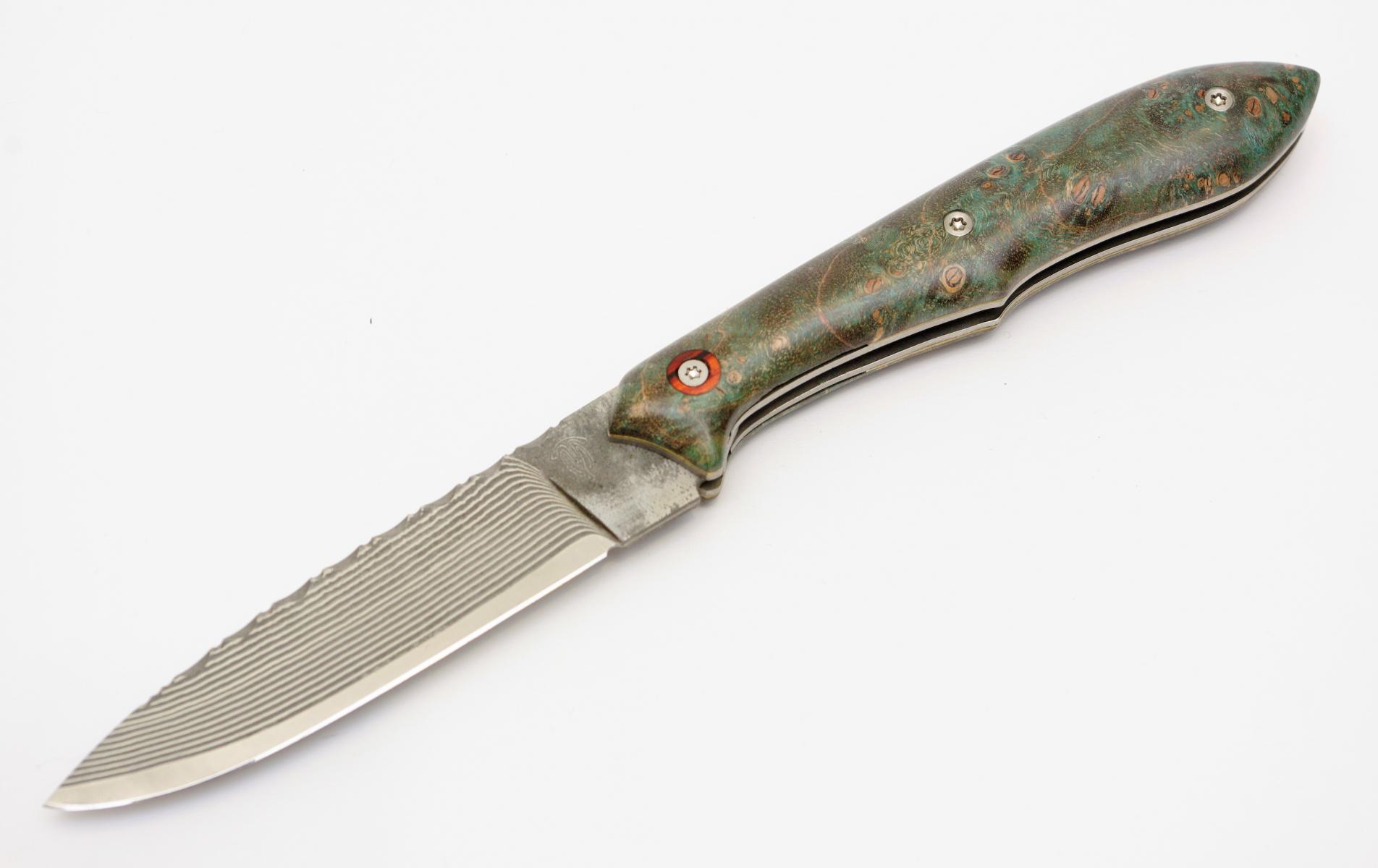 Benjamin Thuillier (MTBlades) made this Max-Folder (225 mm long). The blade is Suminagashi with an
SG2 core. The handle has titanium liners with Alder burl and Padouk inlays. The knife has a special
retention system with a double detent ball. 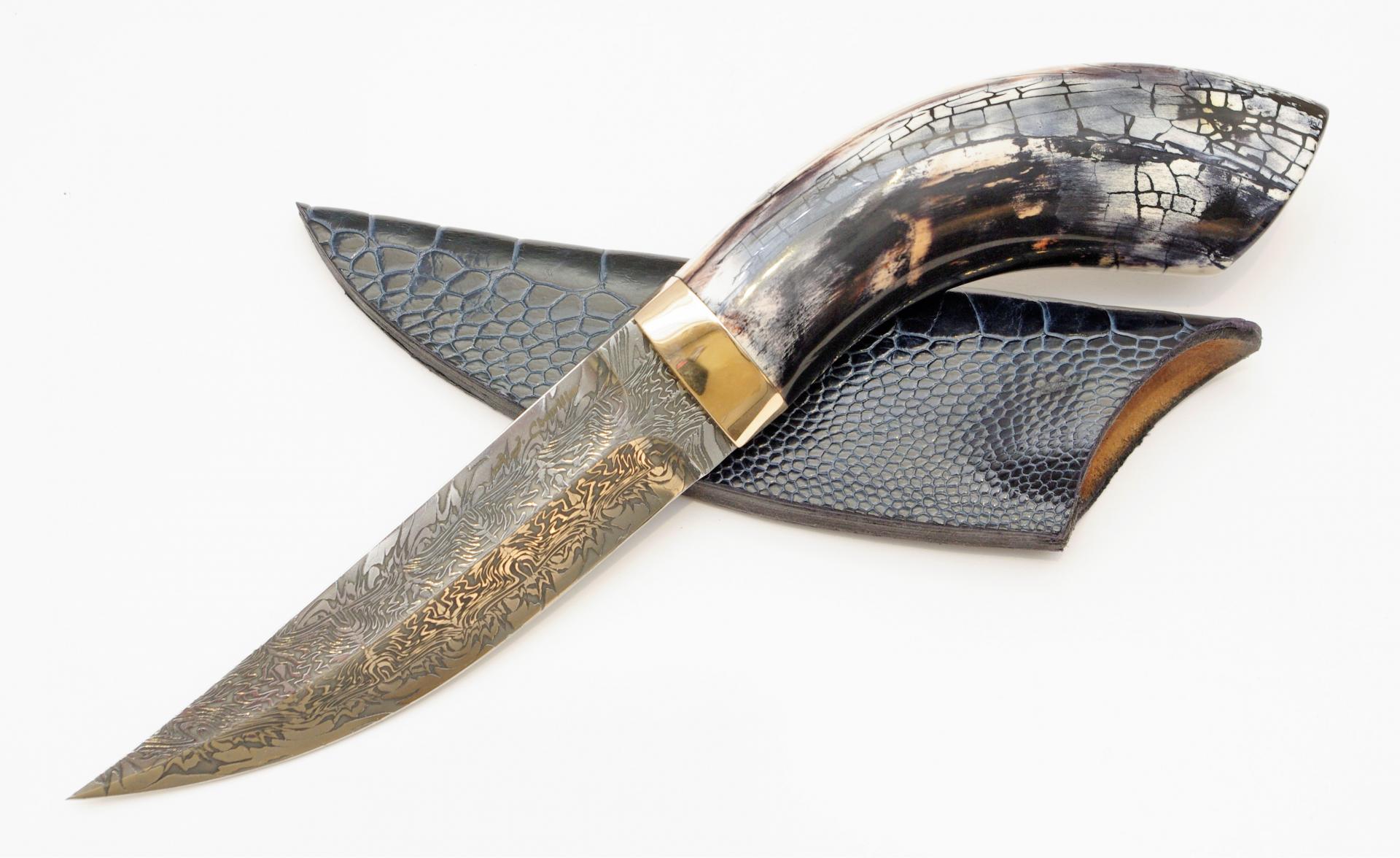 French makers Alain and Joris Chomilier called this knife ‘Memory from Persia’. The blade is carbon
explosion Damascus, the handle is blued and stabilised Warthog tusk. The knife measures 25 cm.

The ‘Silverback’ by Belgian knife maker Eric Parmentier. He calls it a triple-action knife, as the blade folds
inside the two parts of the handle. The blade is 14C28N steel, the handles are made from tempered Z20C13.

Virgil Poddig (Forge Viruce) made this Puukko. The blade is aptly made from Odin Damascus and the
handle is Ebony and bronze. 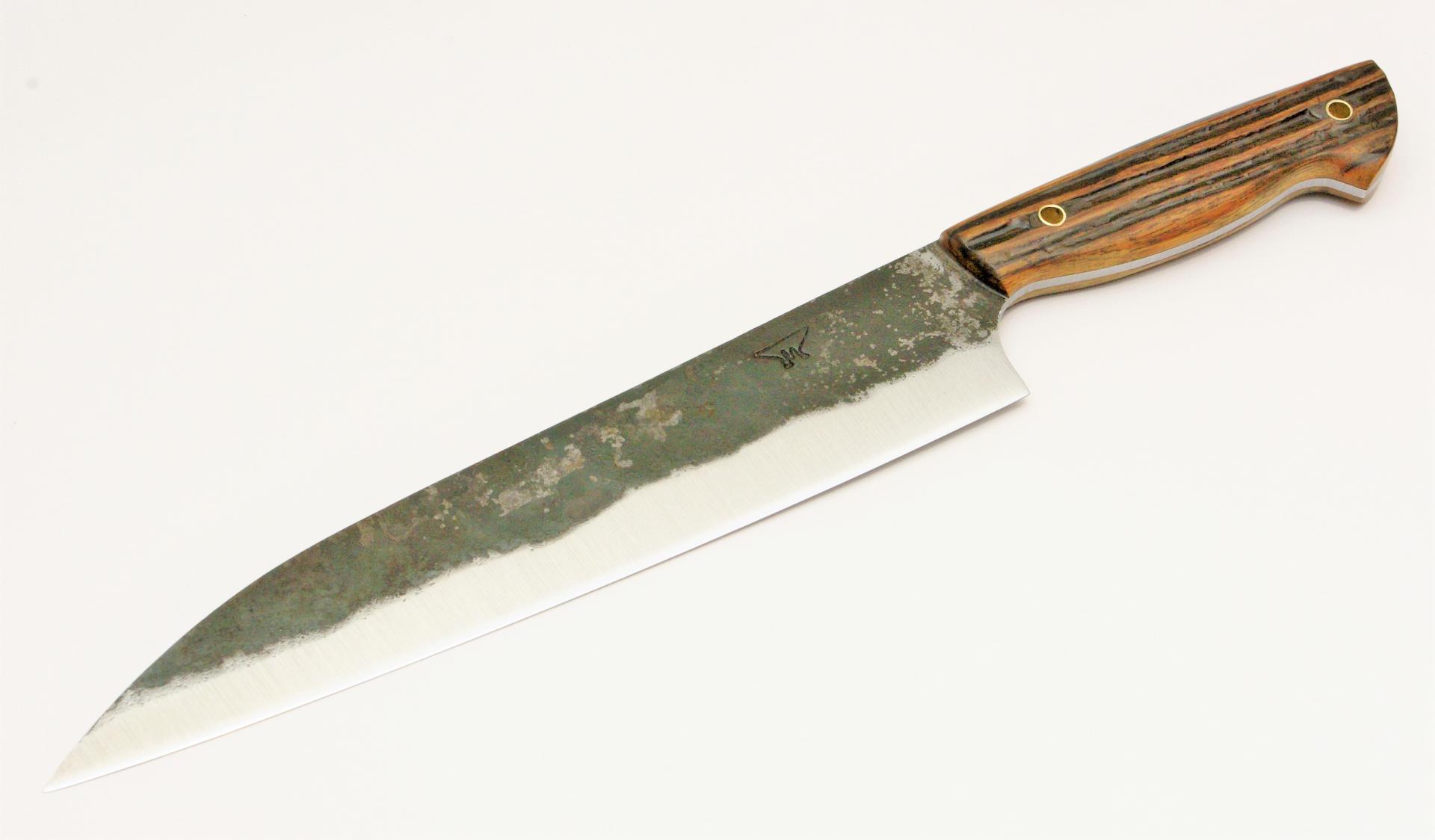 A Chef’s knife by French maker Frédéric Marchand. The blade is hand-forged XC75 carbon steel, and the
handle is stabilised Oak bark.

Gary Headrick made this ‘# 1’. The folding knife has a double spring in a titanium chassis. The blade is
from D2 steel and the handles are from synthetic turtle shell with gold leaf and meteorite. The opened
length is 175 mm.

A folding knife by French maker Glenn Guillou. The blade is 14C28N steel, the bolsters are Z40.
The handle is Desert Ironwood. The mechanism is ‘à Palenquille’.

The ‘Rhea’. Ukrainian Gregorii Verizhnikov is a master bladesmith. He forges Damascus steels and works
together with a group of craftsmen who turn it into knives. The Dione is an example. The blade is mosaic
Damascus, the handle is walrus tusk. 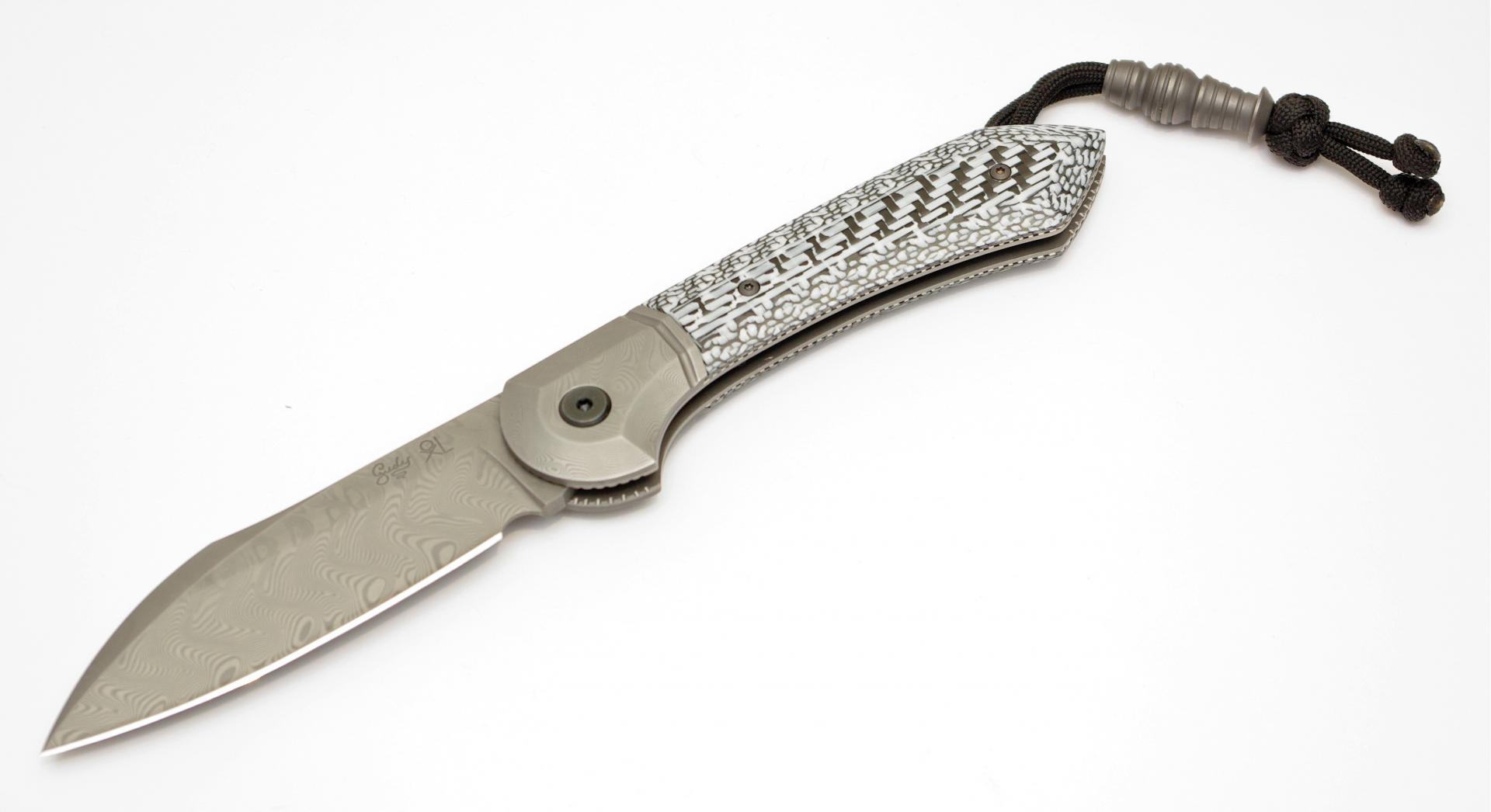 The ‘Magna’ by Gudy van Poppel. The slipjoint folder has a blade from Markus Balbach Inox Damascus
and carbon fibre handle scales. 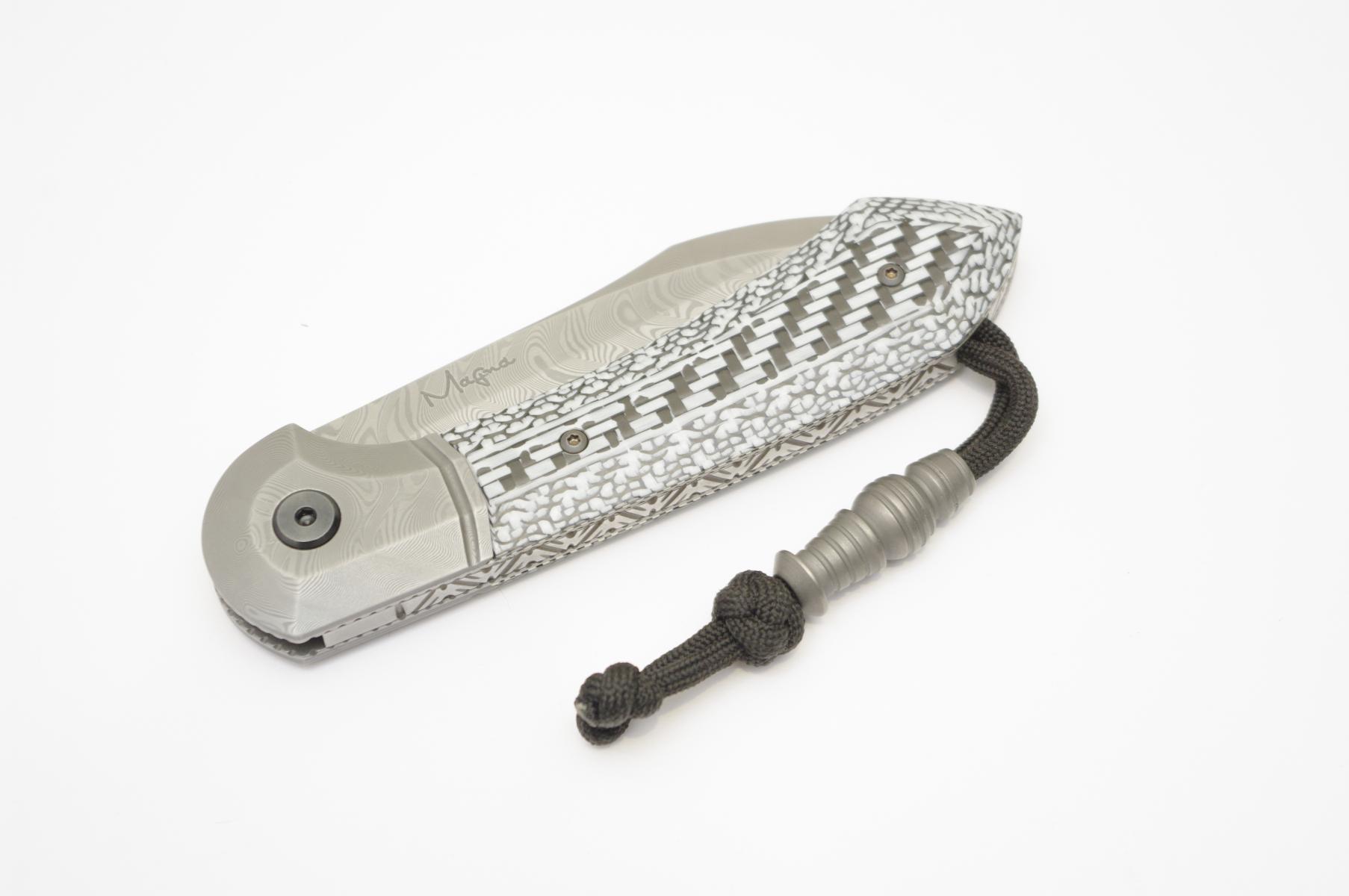 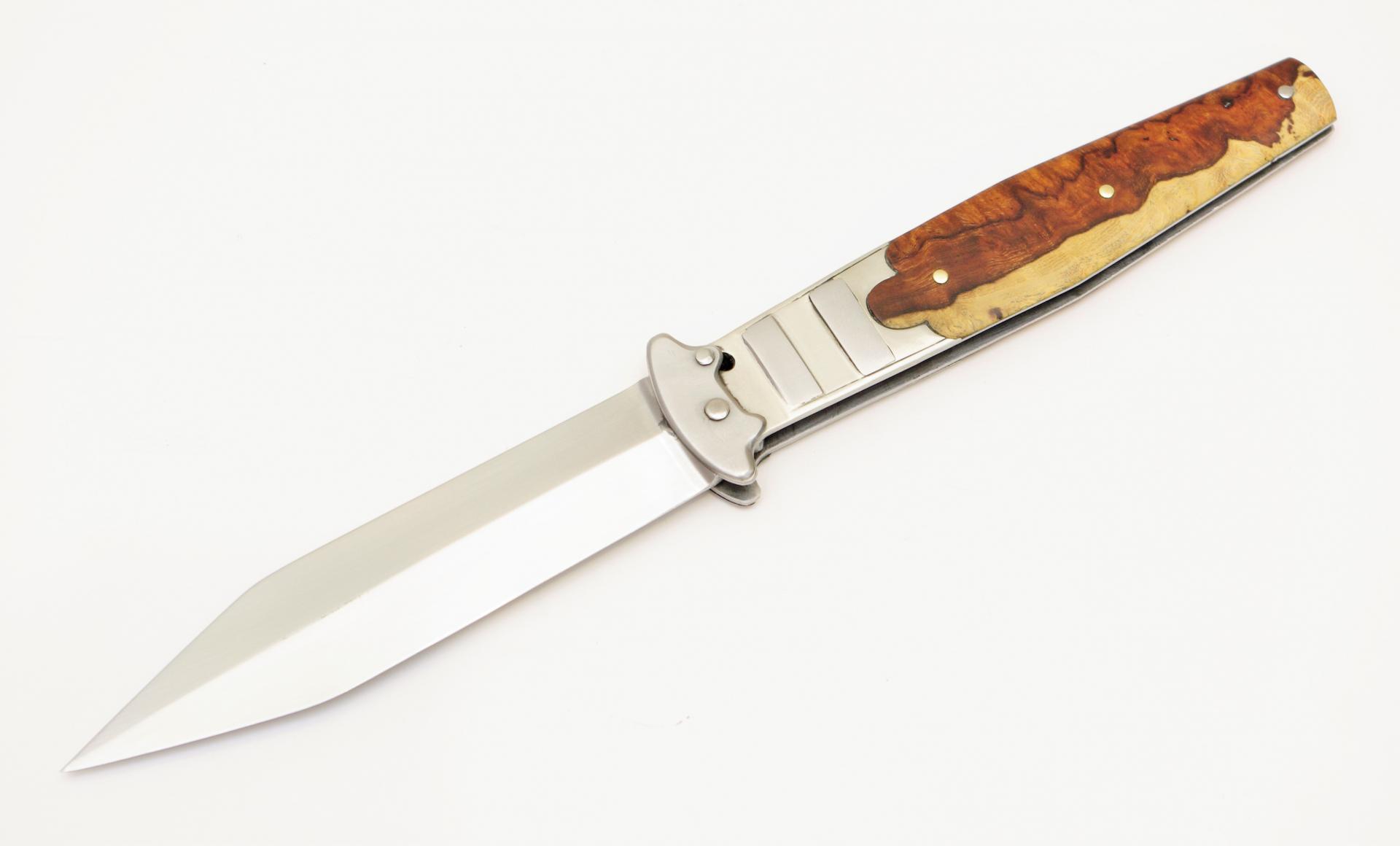 ‘La dagadague’ by French maker Guillaume Antoniucci. The name translates as something like ‘dagadagger’.
A spring-loaded pivoting clip on the handle automatically locks the blade. The blade is made from Z50cr13
and the handle is Ironwood and nickel silver (maillechort). 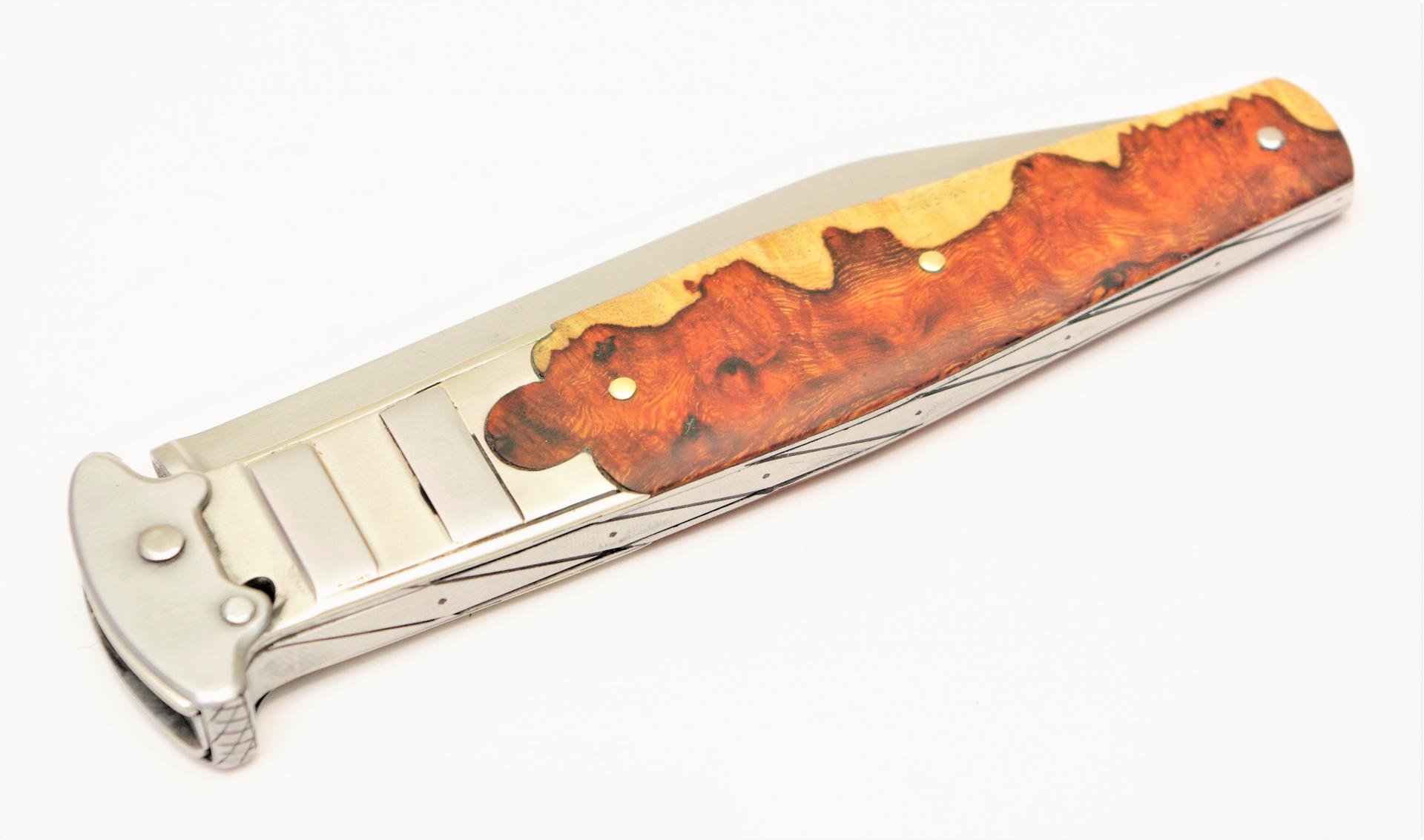 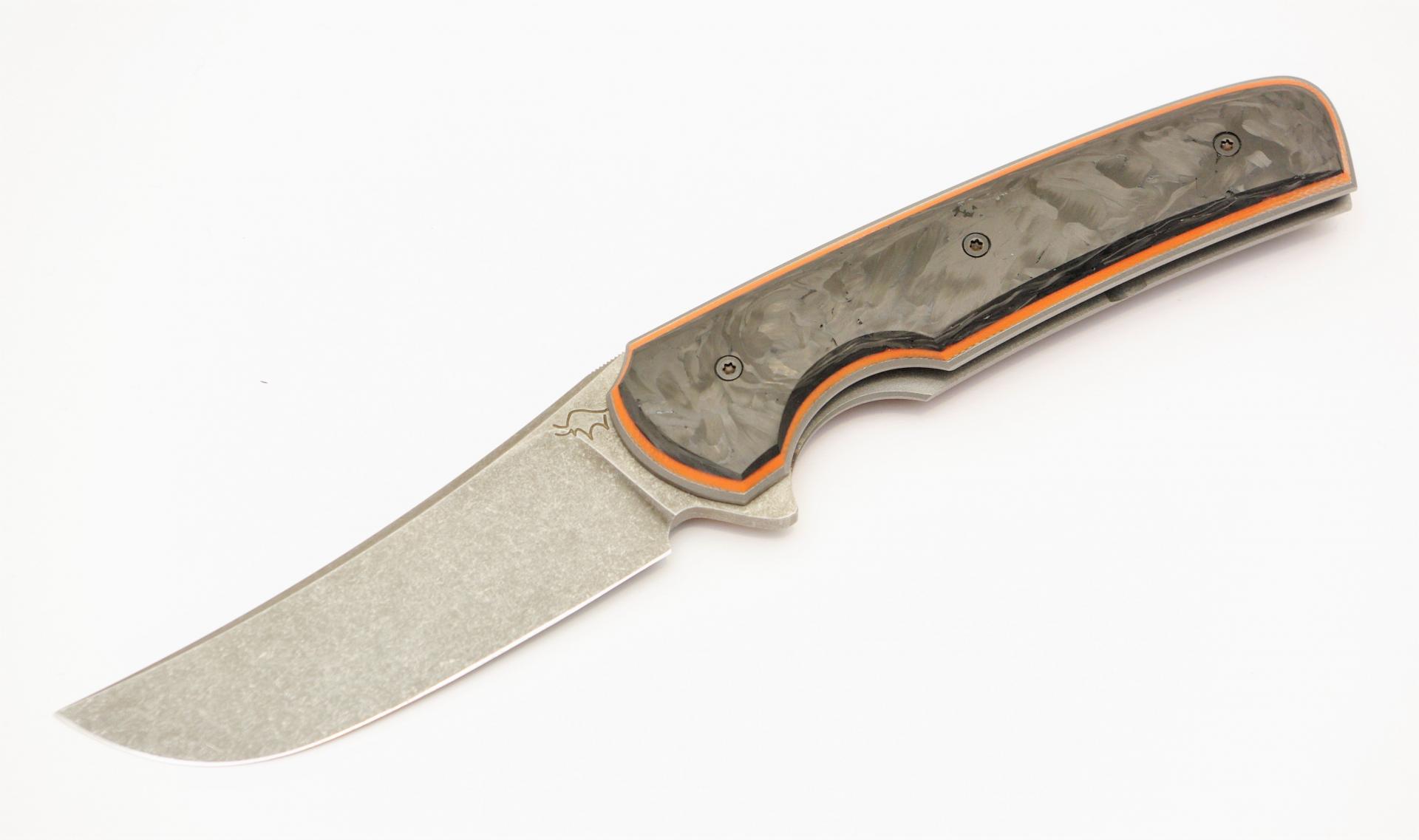 The ‘Hyder’ by French maker Guy Poggetti. The linerlock folding knife has an 85 mm N690 blade with a
flipper. The handle has steel liners with orange G10 and carbon fibre scales. 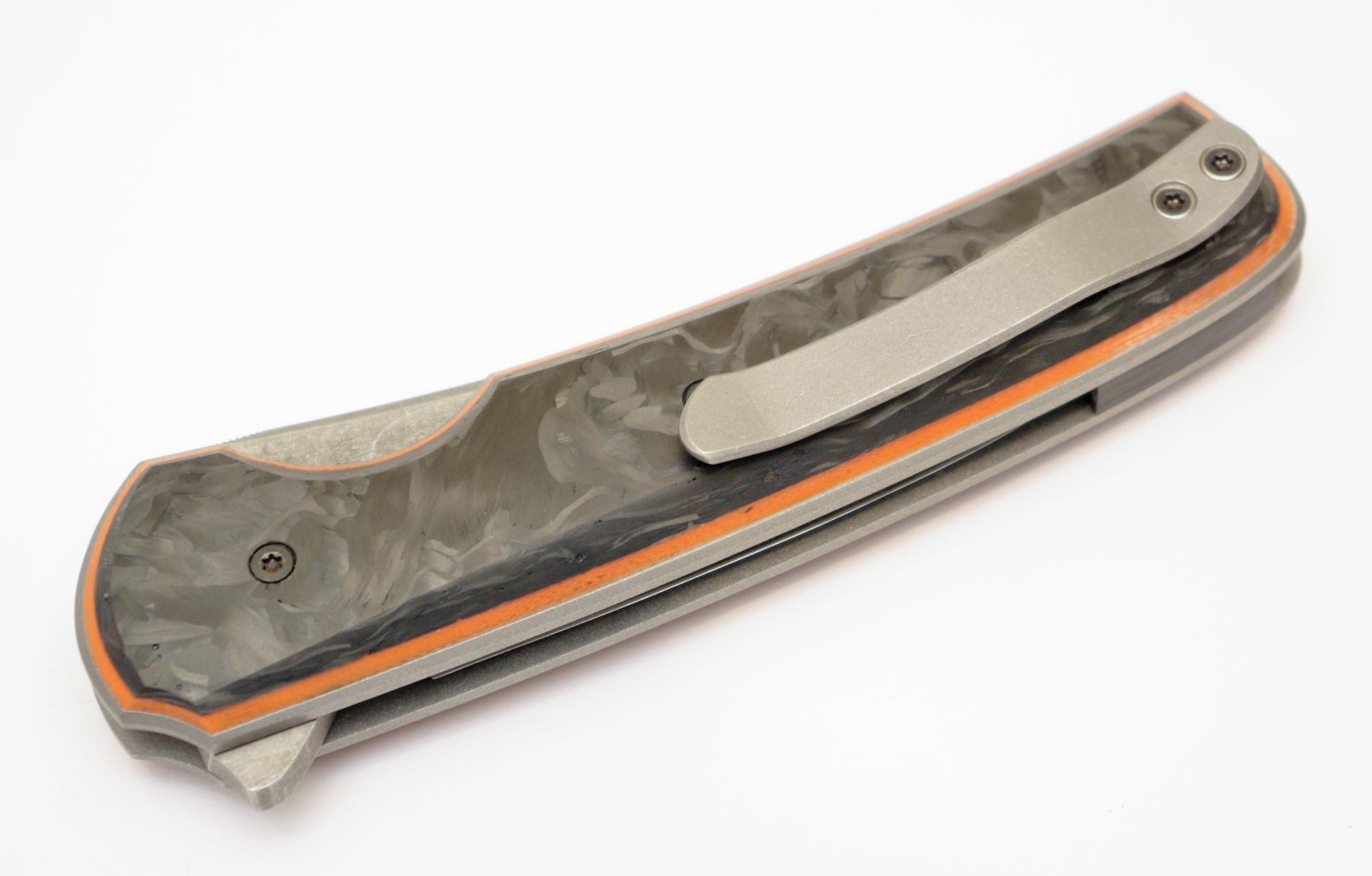 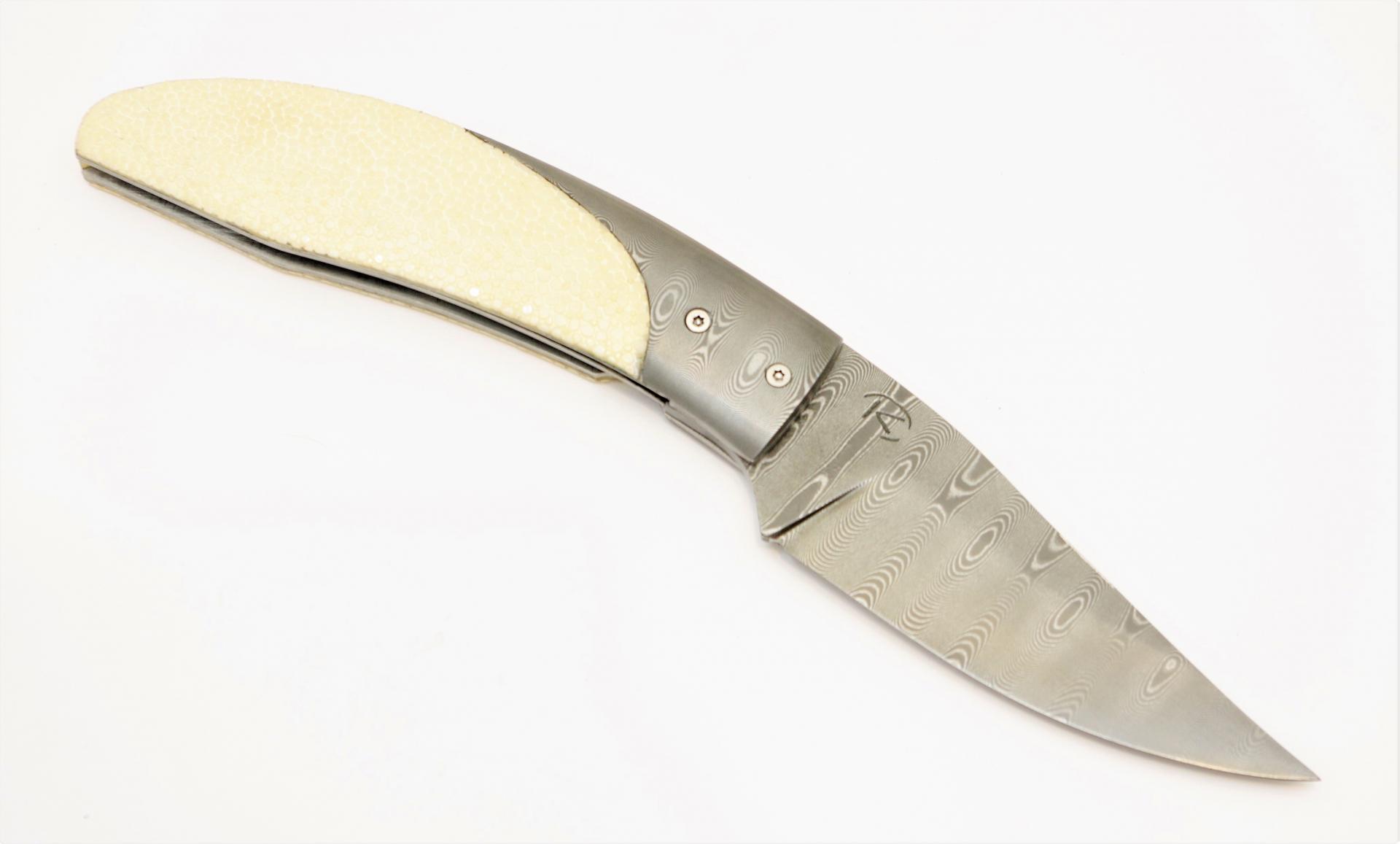 An elegant linerlock folding knife by French maker Guy Ramspacher. The blade and bolsters are made
from 15N20 / 90 MCV8 Damascus. The handle scales are Stingray. 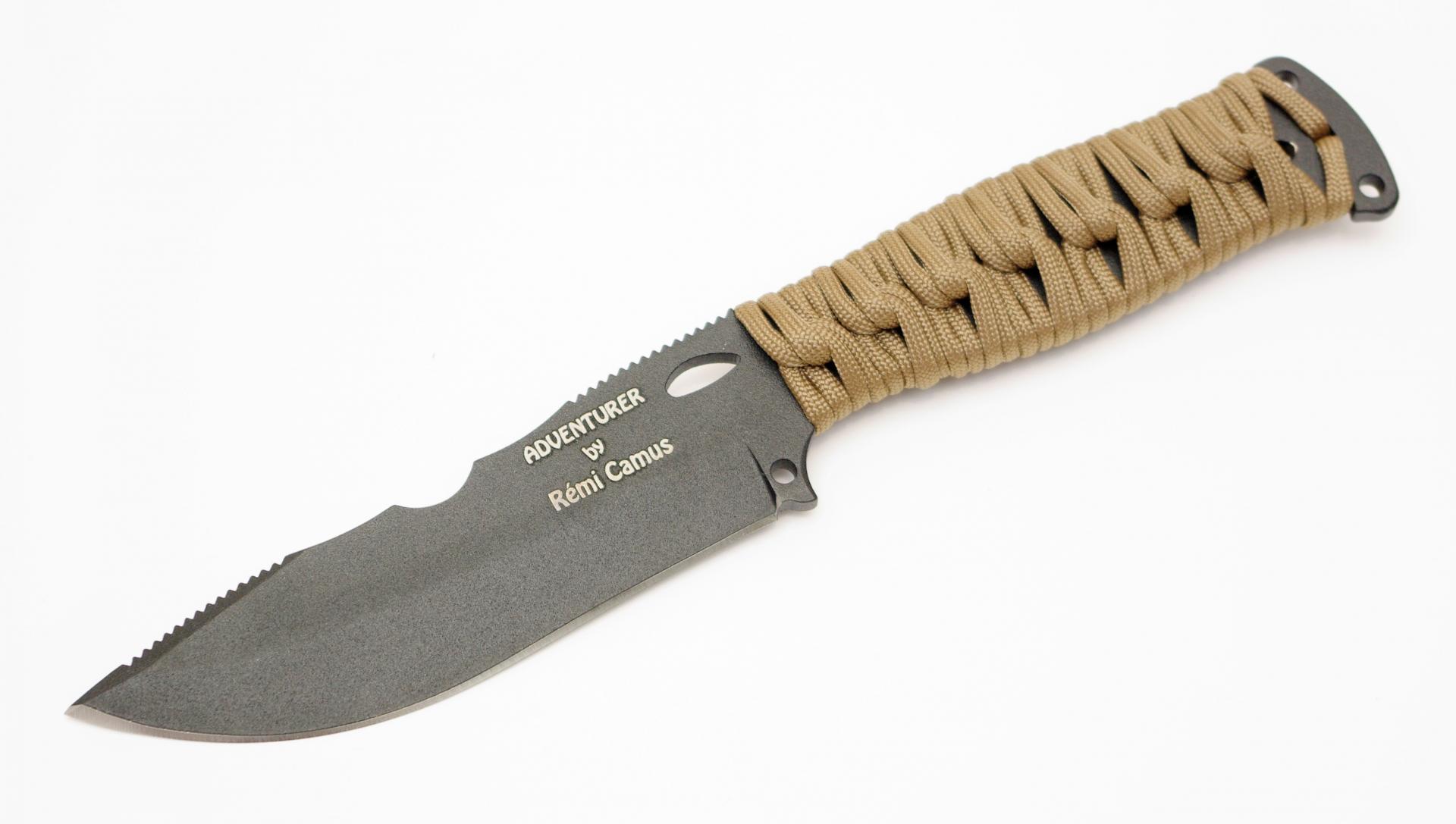 ‘The Adventurer’ by French knife company Wildsteer. The knife was developed in cooperation with famou
French adventurer Rémi Camus, founder of the Association ‘Expedition Terre Inconnue’. The knife has a
117 mm N690 Co steel blade and a paracord handle. 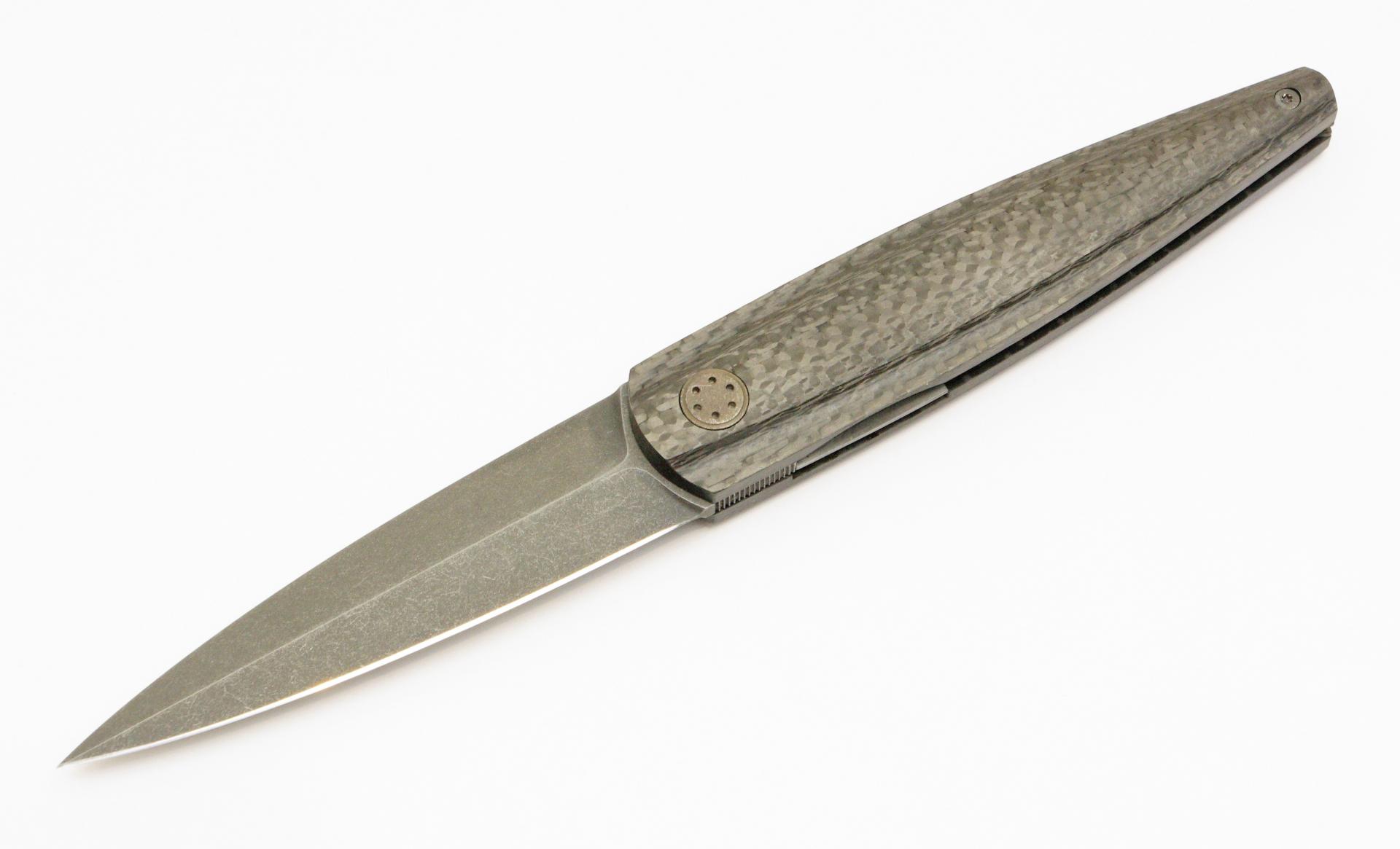 The Black Spike Dagger by French maker Jean Baptiste Lévèque, simply known as JBL. The folding
knife has a 1.2695 blade with an acid stone wash and a carbon fibre handle without steel liners. The
length is 215 mm. 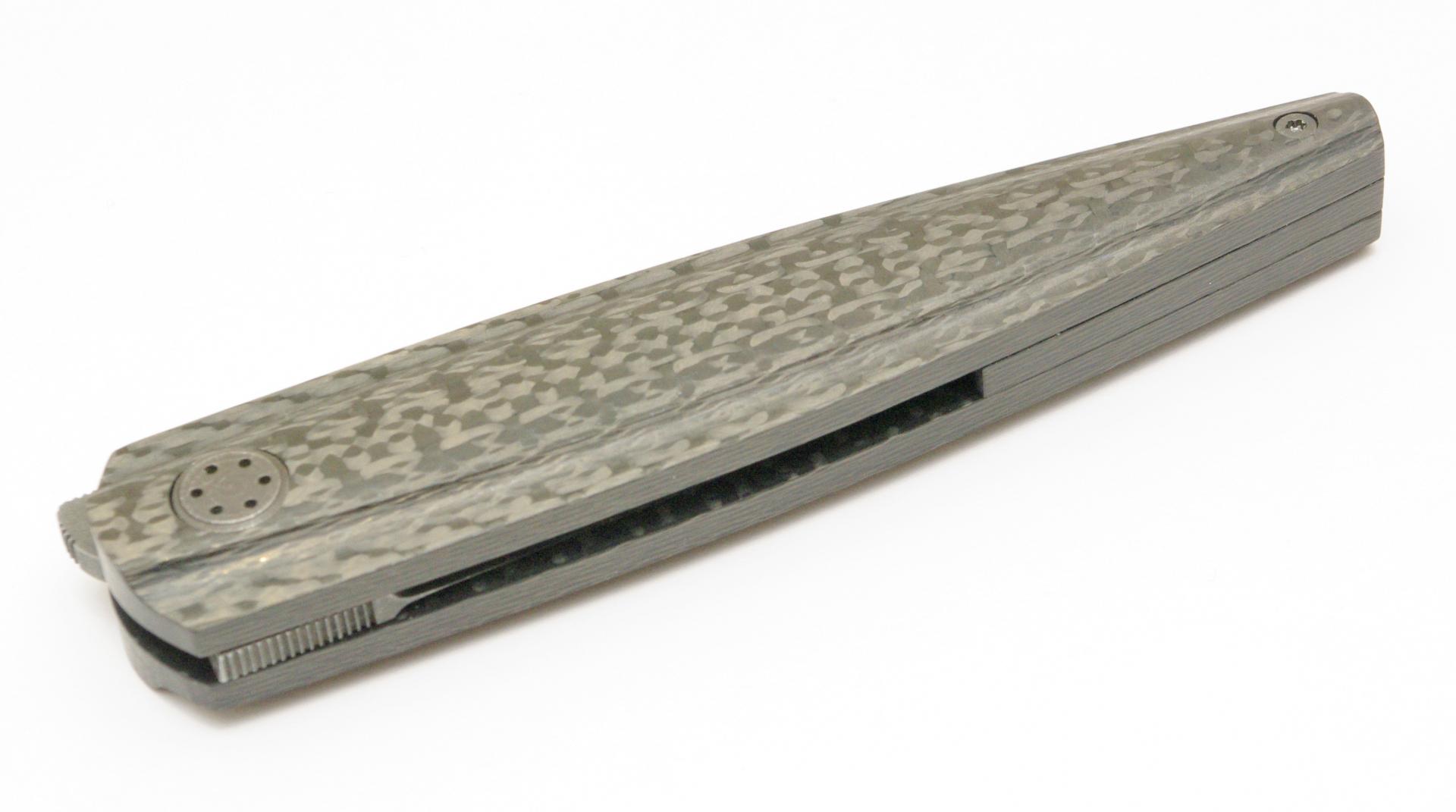 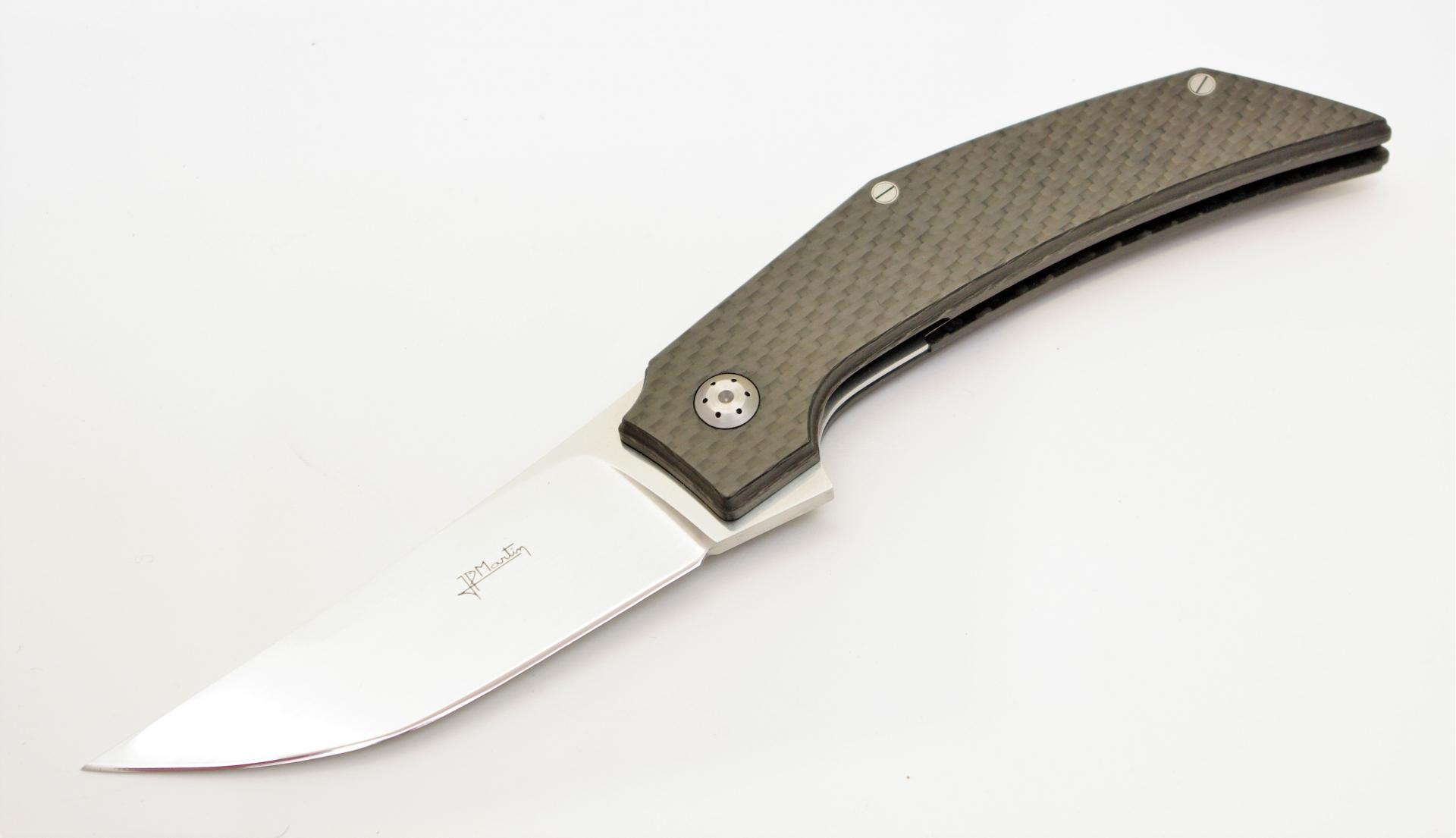 The ‘Empire’ by French maker Jean Pierre Martin, made in collaboration with Tashi Barucha Design.
The linerlock folder had a 40 CP Carpenter blade and a carbon fibre handle. 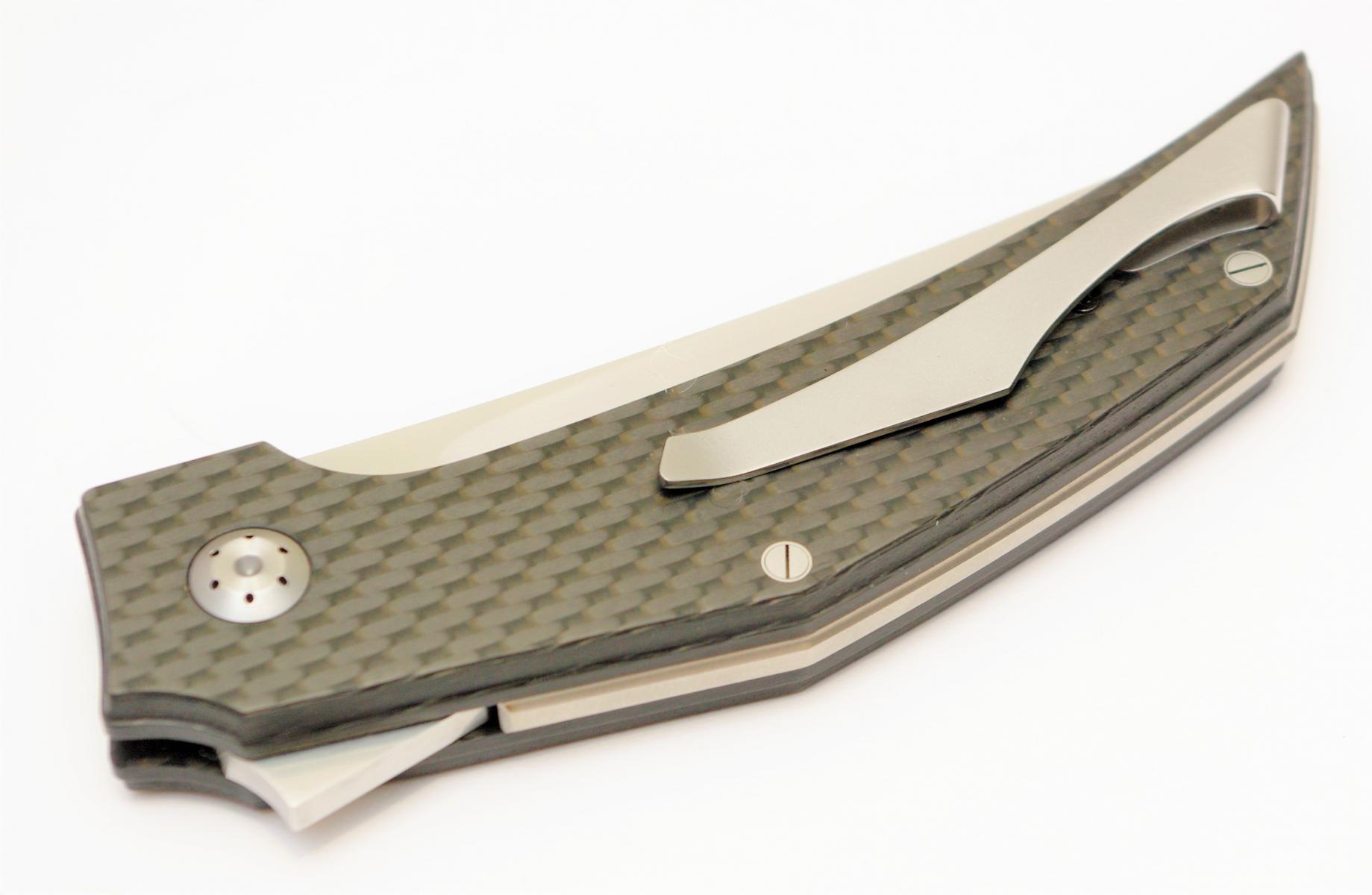 A fixed blade by German knife maker Joe Pöhler. The blade is Markus Becker Damascus, the handle is
Mother of Pearl with gemstone pins. The knife measures 130 mm.

A linerlock folding knife by Michel Delanghe (MDok). The blade is 14C28N Inox, the handle has titanium
liners with scales from carbon with bronze powder. The opened length is 175 mm. Note the rear and of the
blade which protrudes from the handle when the knife is closed; it has the shape of a wolf’s head. 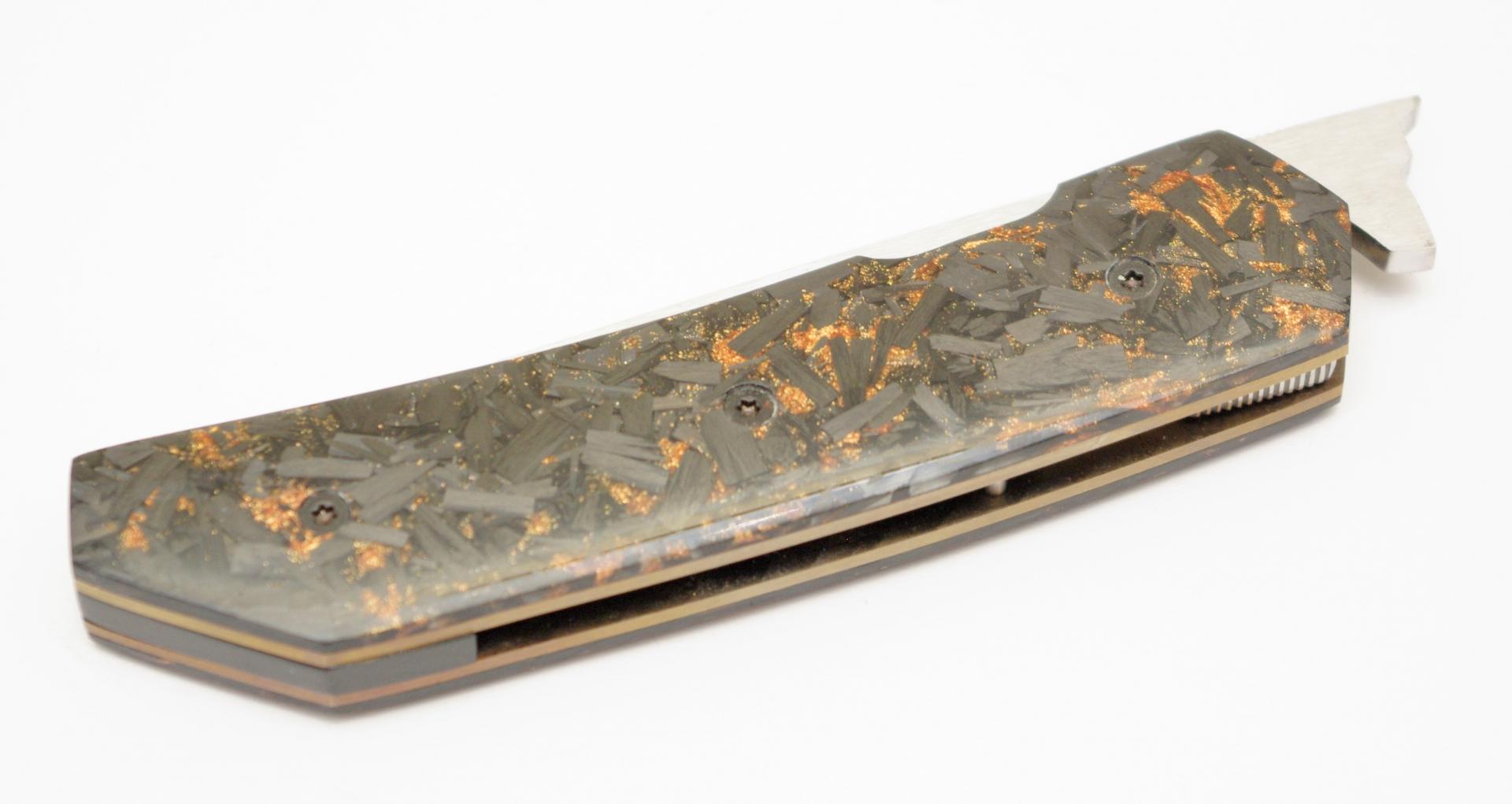 Italian knife maker Moreno Feltresi made this striking ‘Double thinking 12’. The knife is made from
W 1.2842, UDH 15n20 and W 1.2550 Damascus. The handle and sheath cover are resin epoxy and
walnut shell powder. 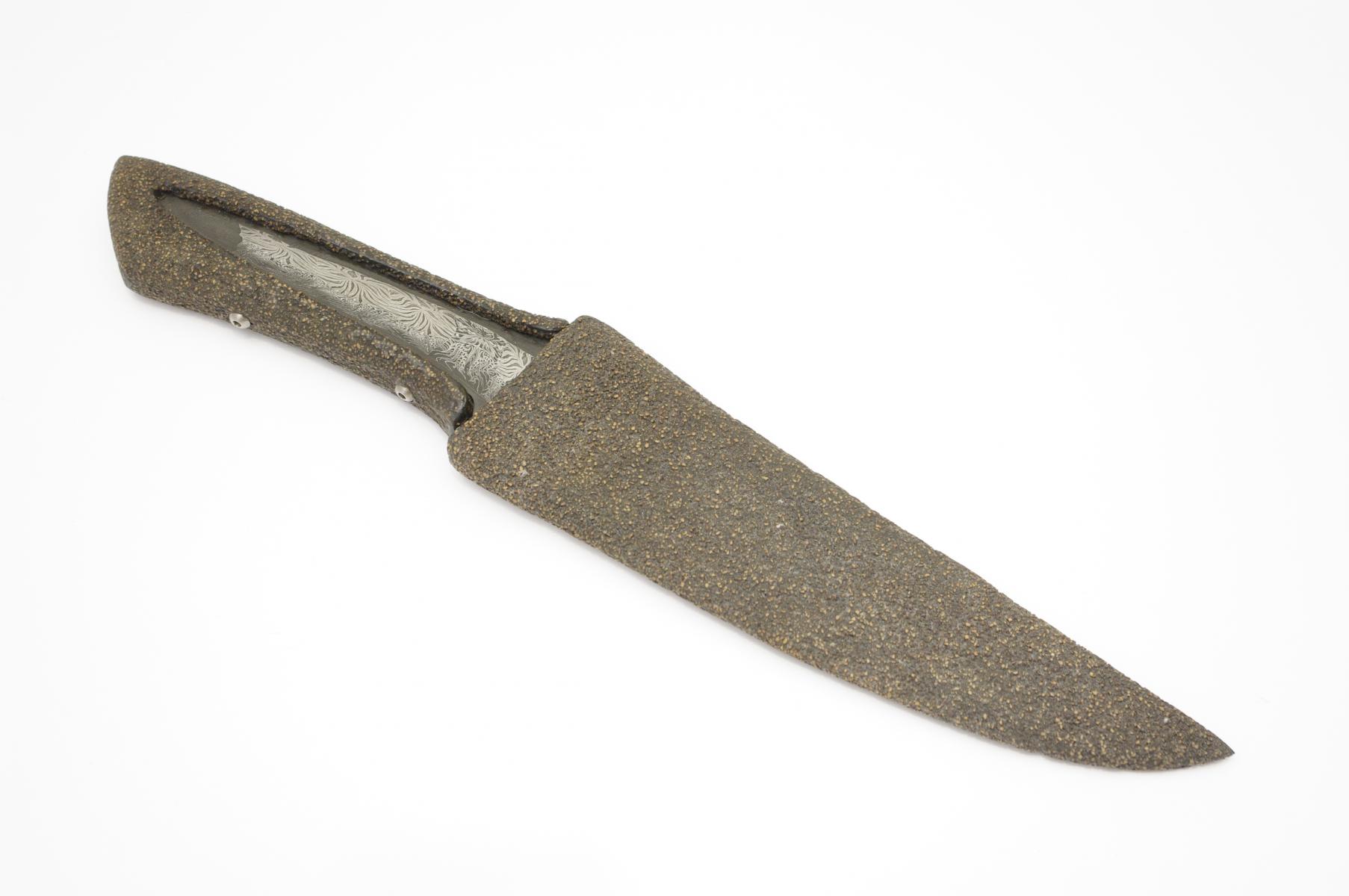 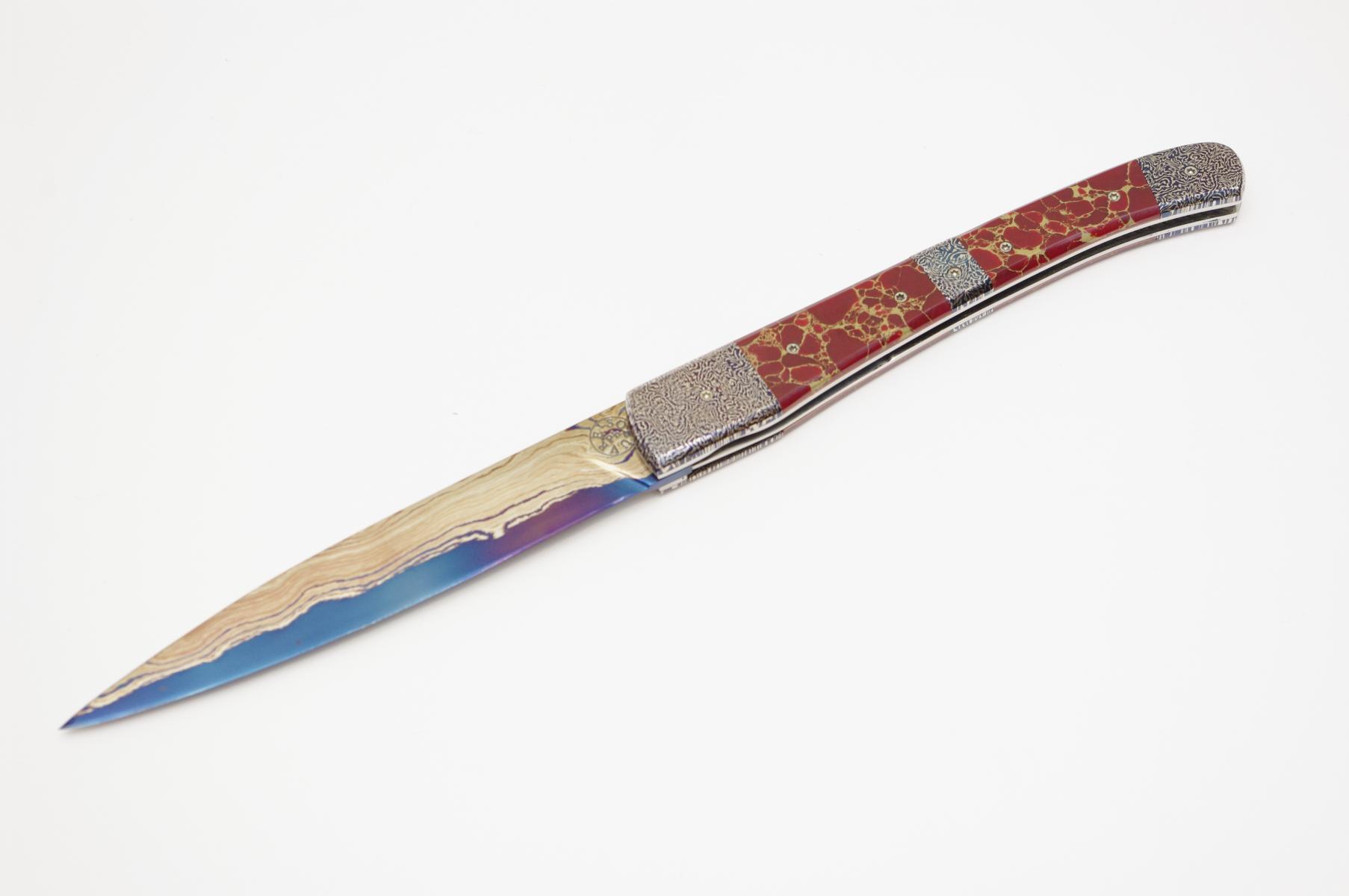 French maker Philippe Soeuvre named this knife ‘Le Vezelay’, after the place where he lives nearby, famous
for its basilica. The blade is San Mai Damascus, the handle is mosaic Damascus and ‘pierre reconstituée’,
which literally translates as reconstituted stone.

‘Le Bitord’ by French maker David Ponson. The name refers to an inhabitant of Thiers, one who loves the
good life. The blade is Damascus, the handle mammoth ivory. 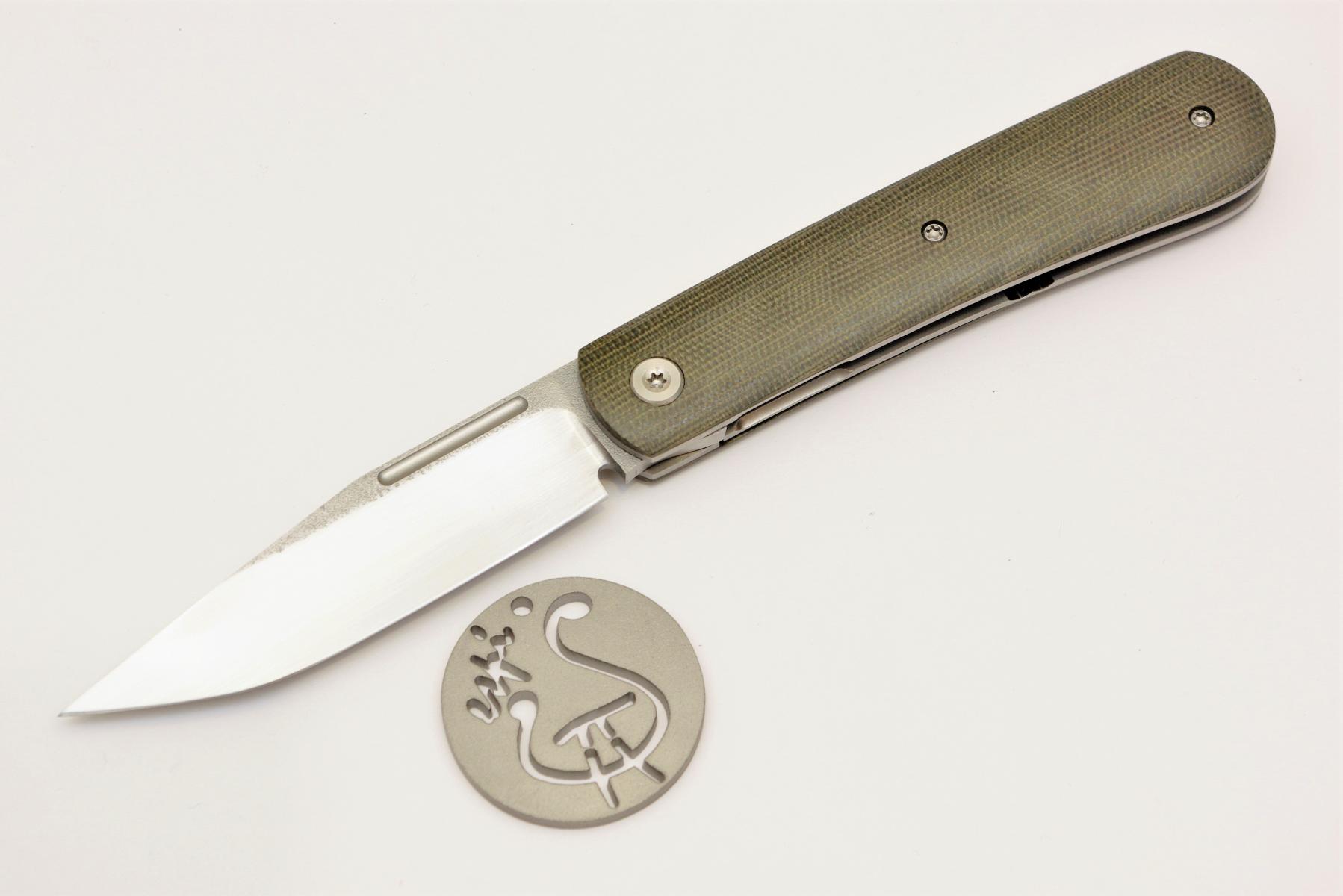 The ‘Strapper’ by Stéphane Espi. The linerlock folding knife has a 115W8 blade and Micarta handle.
The blade has a ball bearing system. 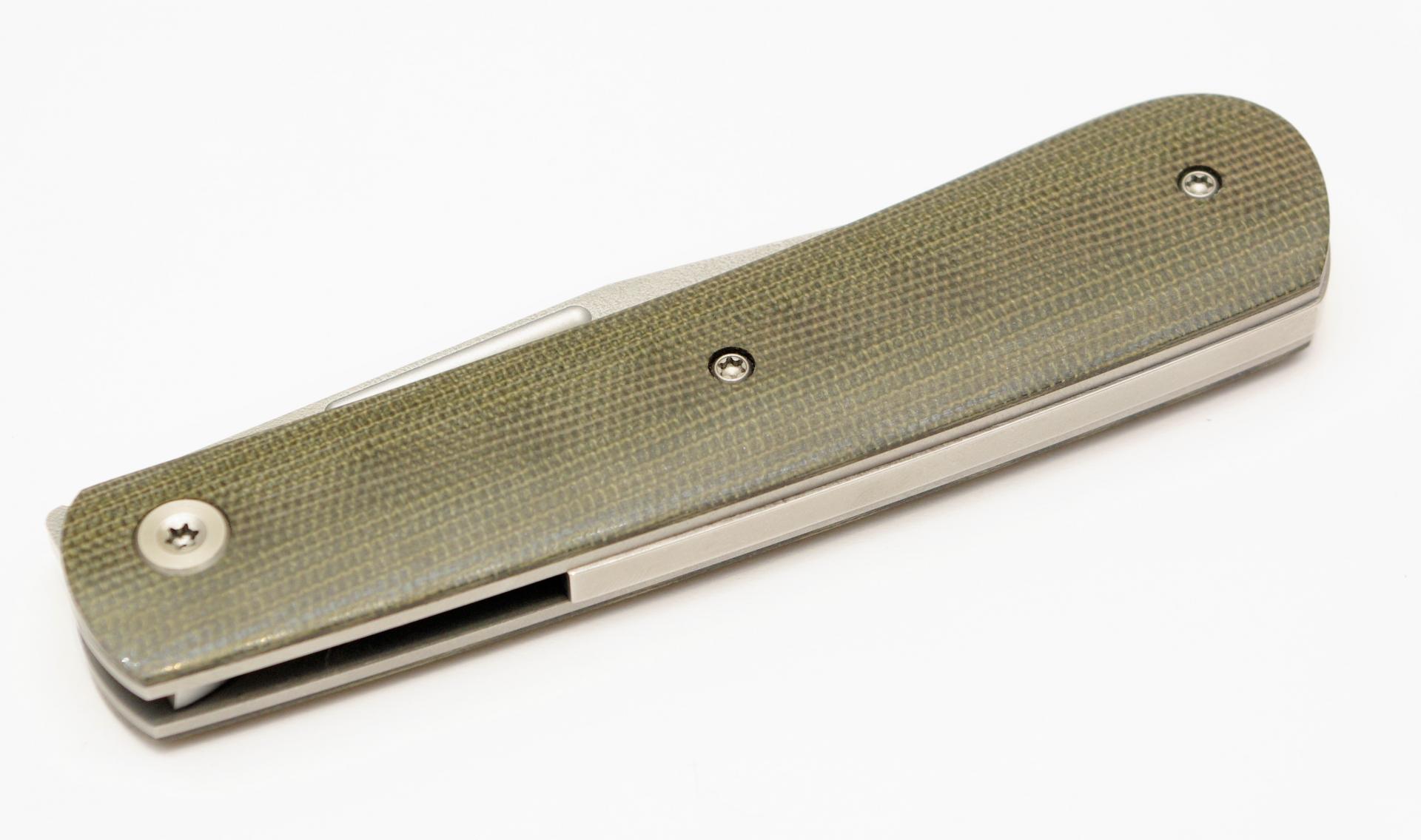 The Hunter by French knife maker Thierry Chevron. The knife has a Wootz blade and a handle from
stabilised Silver Birch. 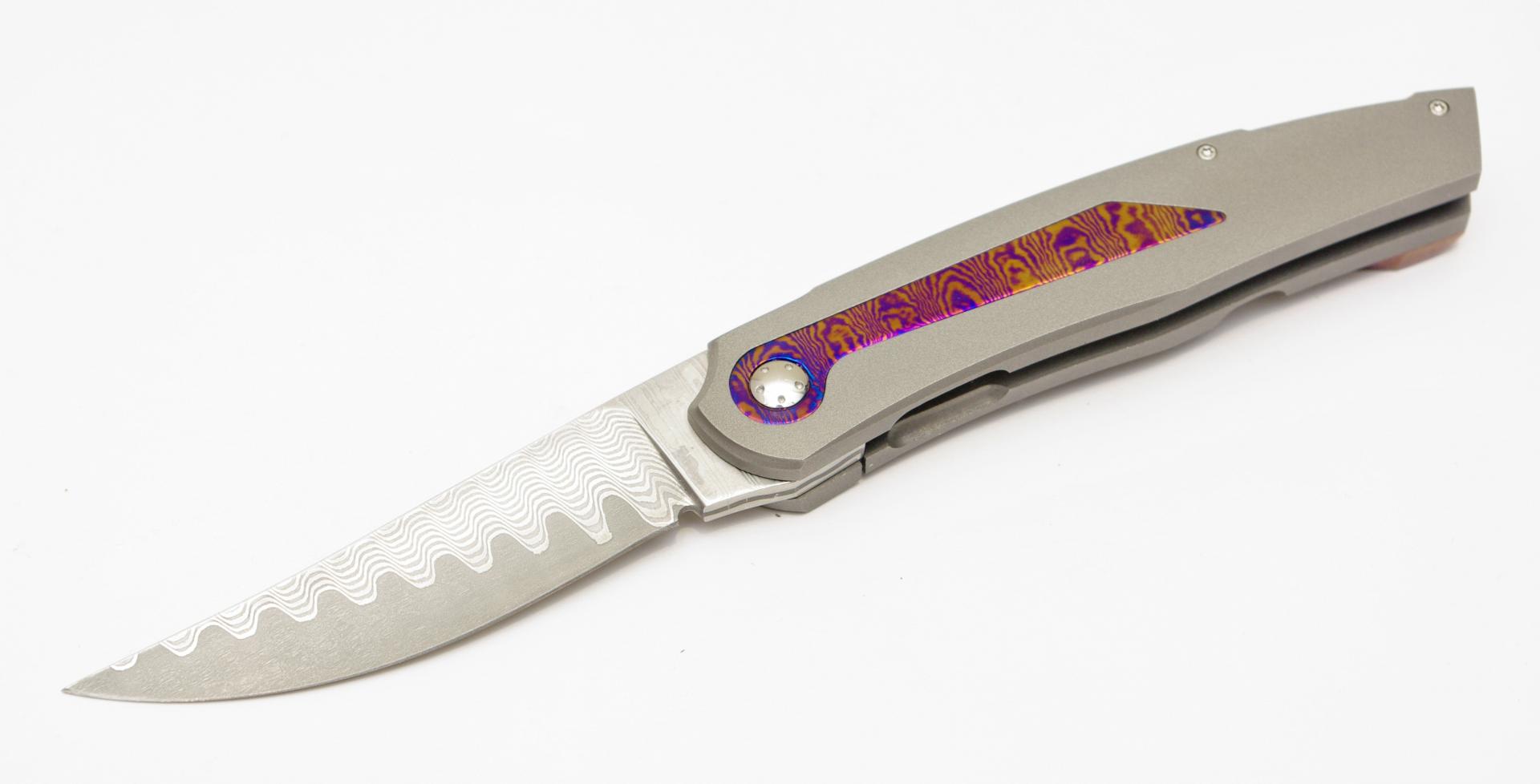 Stéphane Sagric made this ‘Vortex’. The framelock folding knife has an San Mai blade and a handle
made from titanium with a titanium Damascus insert. 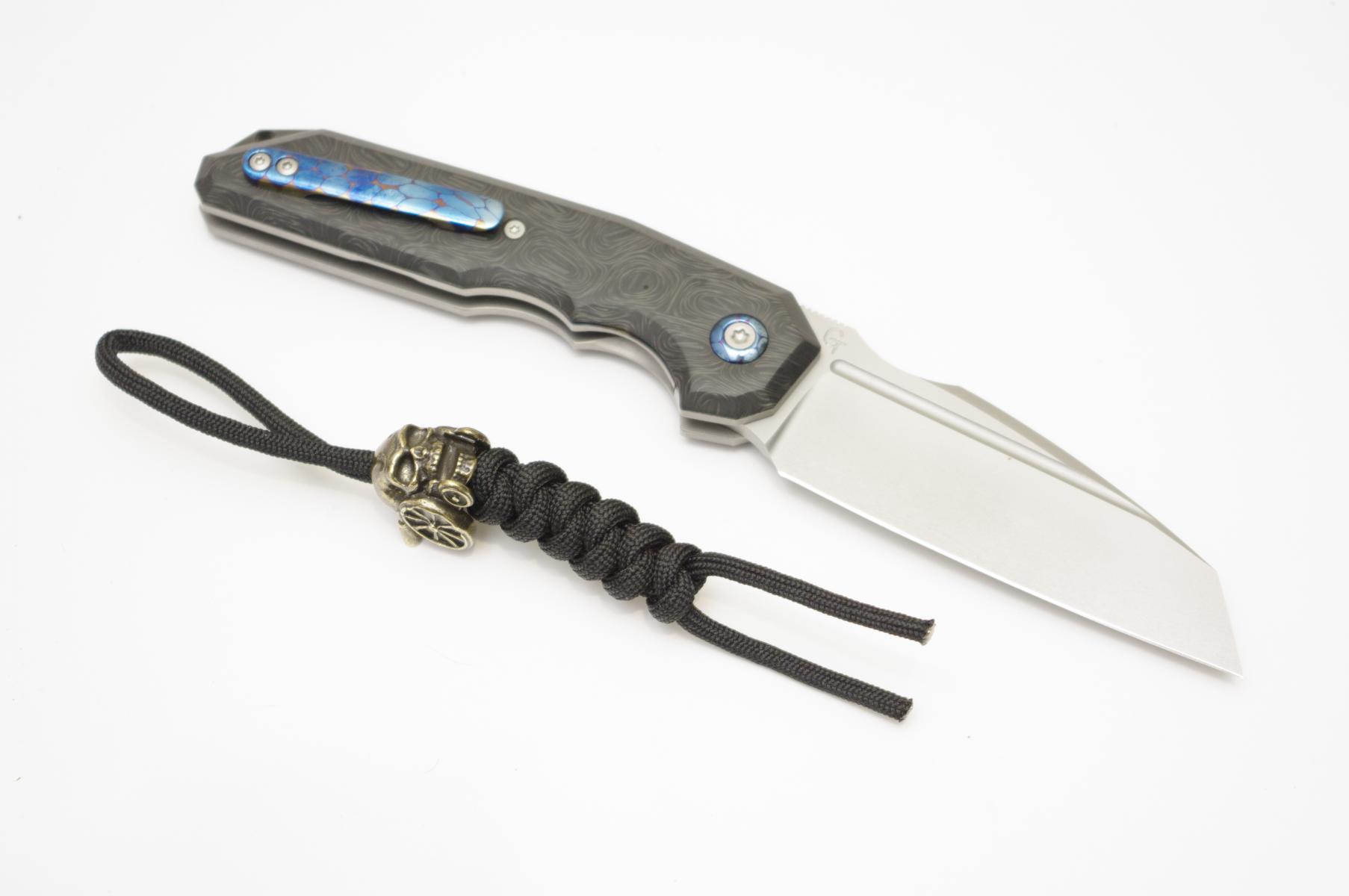 Thomas Gony (Grind Tactical Knives) presented this ‘Warmtac’ linerlock folding knife. The blade is D2 and
the handle is ‘Cmascus’ carbon fibre with a collar and clip made from Moruti. The bead is by 2Saints. The
opened length is 20 cm. 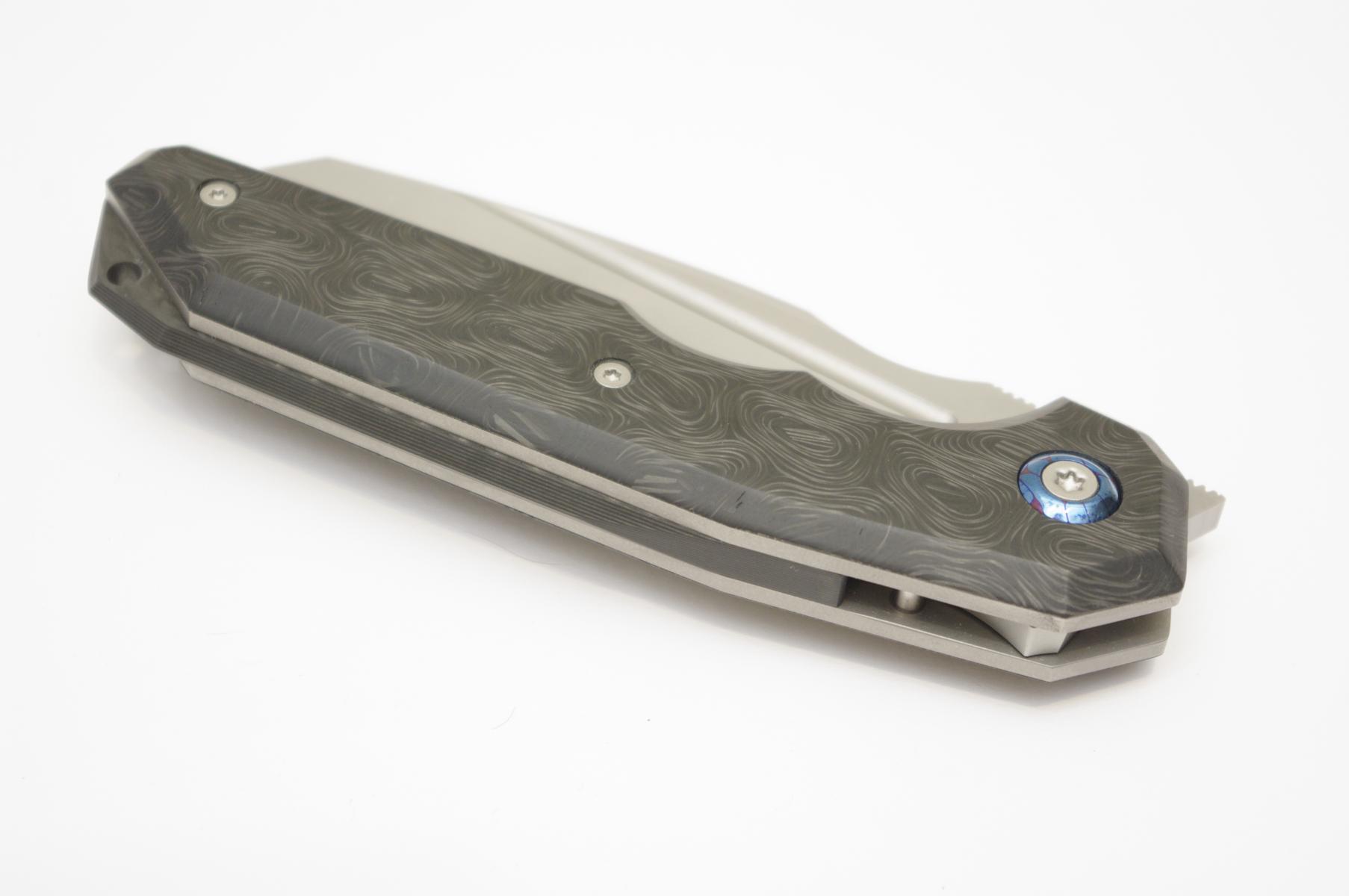 The ‘Névé’ by French maker Tim Bernard. The blade is stonewashed 14C28N and the handle material
is G10. This model is somewhat smaller than the regular ones, and measures 115 mm.