A new knife show is always something to look forward to. Those who attended the first edition of Euro Knife 2017, on February 4 and 5 in Strasbourg, France, were not disappointed. The location was nice, there were some fifty exhibitors, more than six hundred visitors and lively sales. A great success for the organization, which is already making plans for next year.

Towards the end of the show, initiator Gregory Pohl was still a bit dazed. He and his wife Séverne Sophie Weishaar had started out with a wild idea among friends. After two years of hard work, it had turned into an immaculate two-day knife show. A flying start, which means that Euro Knife be back next year.
France has no lack of knife shows - some even complain there are too much. But they are not evenly distributed. The last knife show in the north-eastern region of Alsace was held in 2006. A pity, since the border region could be appealing to an international audience.
Thus, the idea was born for a revival. Pohl and his wife founded a nonprofit organization, the EKS, and went to work. Their goal was simple: an occasion for knife makers and knife buyers to meet. They got help from the Belgian Knife's Society, which brought them into contact with many knife makers, and from many volunteers.
Of course there are some things lft to be desired. The participating knife makers were still mostly French – of course there is nothing against them, but the exhibitors could be more international. There were a few last-minute cancellations, which is always a pity. But there was a large variety, with an equally varying price range. The following pages show some examples.
The dates for 2018 are not yet known, but those curious can have a look at www.euroknifeshow.com, or follow Euro Knife on www.facebook.com/euroknifeshow.

The 'Universal' of US knifemaker Gary Headrick, who has been living and working in France since 1963. The knife has two blades with internal springs. The Damask is from Markus Balbach from Germany. The liners are made of titanium and the scales are a combination of meteorite, Pietersite, mother of pearl and tortoise. The length of the Universal is 190 mm.
rnrnrn 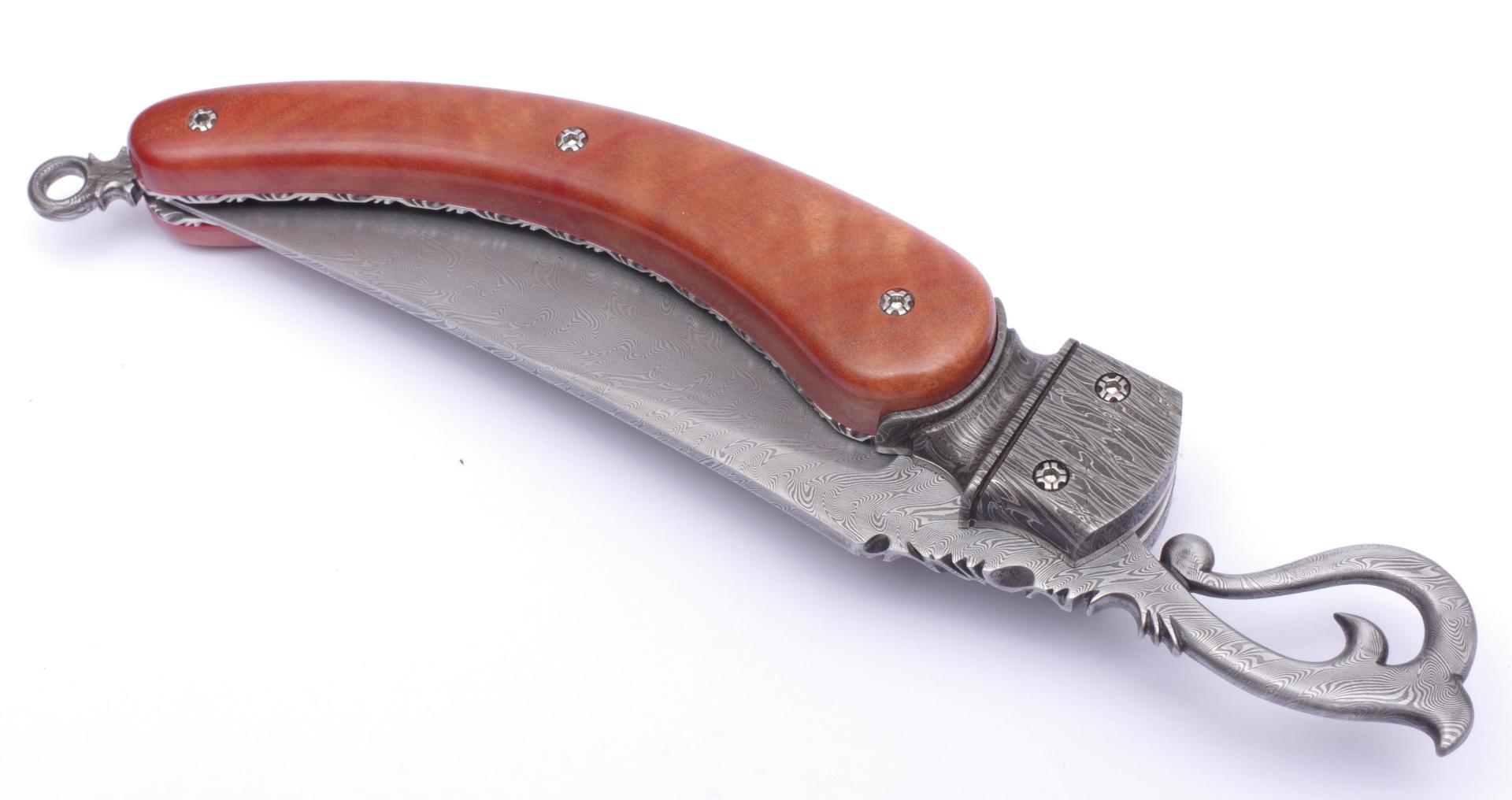 Atelier du Lotus is the business name of four Corsican knife makers. Their knives vary from traditional to artistic. The illustrated knife is made by Franck Thomas. The model is a Piemontais, a traditional knife from the Piedmont region in northwest Italy. The finish is anything but traditional. Thomas has indulged in lavish ornaments and beautiful filing work. The steel is so-called 'Turkish' damask, and the handles are of Pink Ivory wood.

Jean-François Tramoni is one of the knifemakers from the Corsican Atelier du Lotus. He made this 'Corniccioli', a traditional Corsican knife. The blade is from xc75 / 15n20 damask and the one piece grip is made of mouflon horn.

Erik Markman from the Netherlands calls this knife Trigger. The blade is a combination of O1 and 75ni8, the guard is of mosaic damask and the grip is made of Koa. As the detail photos show, the finish is perfect.
rnrnrn

The 'Ferox' is a frame lock folding knife by the Dutch knifemaker Gudy van Poppel. The blade is made of N690Co steel. The frame and pocket clip are made of colored titanium. The length of the knife is approximately 20 cm. 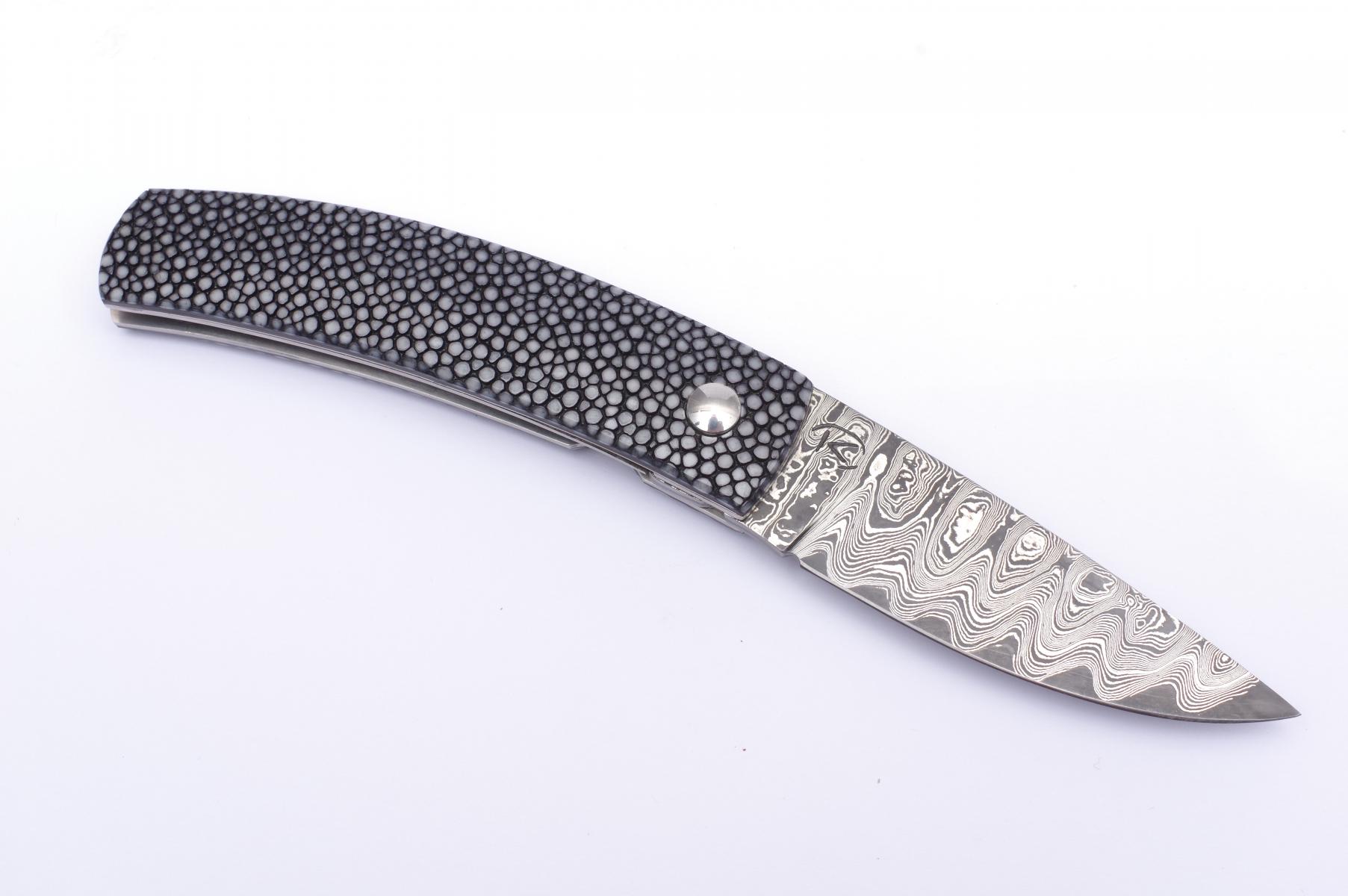 A liner lock folding knife by French knifemaker Guy Ramspacher. The damask blade is made of a combination of 90NCV8 and nickel. The scales are stingray. Folded open, the knife is 200 mm long.

This knife, by Dutch knifemaker Gert van den Elsen, is called the Ragnar Puukko. The steel is Wootz, the handle is a combination of blued mild steel and Royal White ebony. The knife is 22 cm long.
rnrnrn

The 'Persian' by the South African knifemaker Peter Annandale. An elegant liner lock folding knife, seemingly simple, but perfectly made. The blade is damask, the handles are Arizona Desert Ironwood Burl. The blade pivots on the IKBS ball bearing system. Closed, the knife is 110 mm long, opened it measures 195 mm.

This knife of the French maker Stéphane Sagric has a side lock: the locking bar is completely hiddden in one of the grip halves. It is an elegant solution for a folder. The blade is spring damask, the handles are inlaid with honeycomb carbon fiber.
rnrnrn

A massive Tanto by Hans Joachim Pöhler, president of the German Messer Macher Guild. The knife is Masame damask, the sheath of shagreen, the finish is perfect.

The ‘Feyd’ by French knifemaker Yann Régibier is a remarkably finished liner lock folding knife. The blade consists of 220 layers damask, a combination of 60Ni20 and 90mcv8 steel. The handle is made of sculpted boxwood with decorated liners and spacer.

‘Le Hublot’ (the window) is a back lock folding knife by the French maker Eric Depeyre. The 100 mm blade is made of RWL34, with four tiny gold thumb studs to help open it. The liners are made of titanium. The handles are made of lightning carbon fiber, inlaid with mother of pearl.

The human imagination knows no boundaries, and neither do knifemakers. The Frenchman Virgil Poddig (Forge Viruce) presented this medieval 'tactical': a liner lock knife with the appearance of a friction folder, with a leather sheeth. The blade is made of xc75 / 15n20 / 30mcv8 explosion damask, the handle is Arizona Ironwood.

The ‘Buffalo’by Belgian knifemaker Eric Parmentier.  It is a folding knife with a patented locking mechanisme, designed by Parmentier. The blade is made of 14c28n steel, the handles are chestnut root. Fit and finish are superb, as shown in the detail pictures.

French knifemaker Guillaume Antoniucci made this original lock. If the blade is folded open,  a locking block falls in a recess on the blade spine. With the left-hand lever the block can be lifted to close the blade. The blade is made of crWMoV12 X210 steel, the grip of Amboina. Folded open, the knife is 222 mm long.

French knifemaker Geoffroy Gautier and his company la Marque au Gamma presented these folding knives, based on 18th and 19th century examples. The steel is x50 CrMo V15 (stainless steel) and the handles are made of cow horn.

The ‘Fuji’ is a folding knife by 'Les Frères Teymen’ (the Teymen brothers) from Thiers, France. The blade is of damask, the grip is made of mammoth ivory.

A liner lock folding knife by the French maker Thierry Chevron. The blade is from RWL 34, the guard of titanium and the handles are made of carbon fiber.

‘La truite’ (the trout) is the appropriate name for this knife by Frenchman David Jolivet. The synthetic resin handle has a cast in lure on both sides. The blade is made of Niolox.

Italian knifemaker Gigi Sechi made this 'Mozzetta’. The blade is of explosion damask, the handle from the horn of a mouflon sheep. 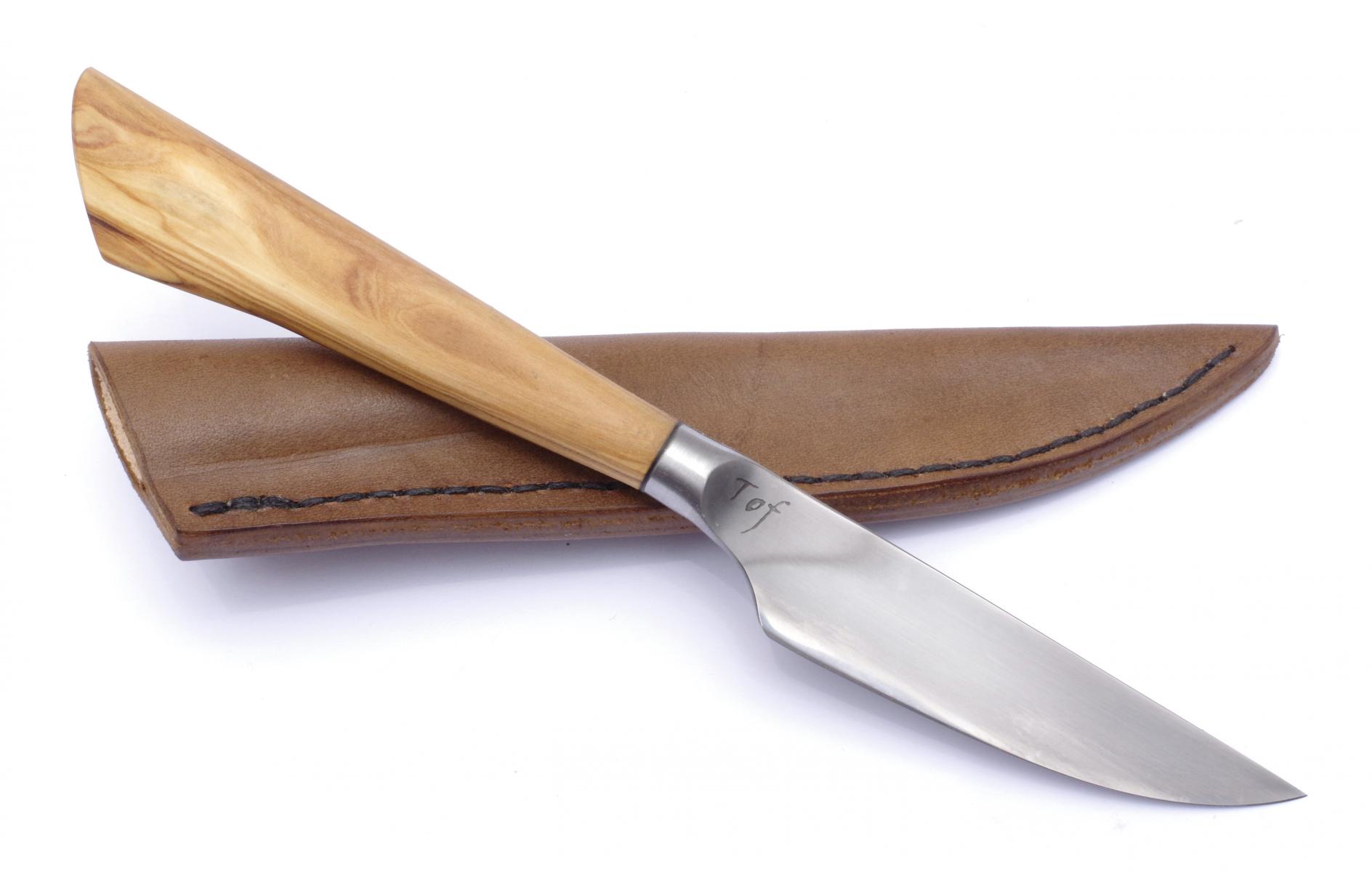 A simple but elegant fixed blade by the French maker Christophe Andrian. The blade is made of  100Cr6 steel, selectively hardened, and the handle is from olive wood. The knife is 21 cm long. 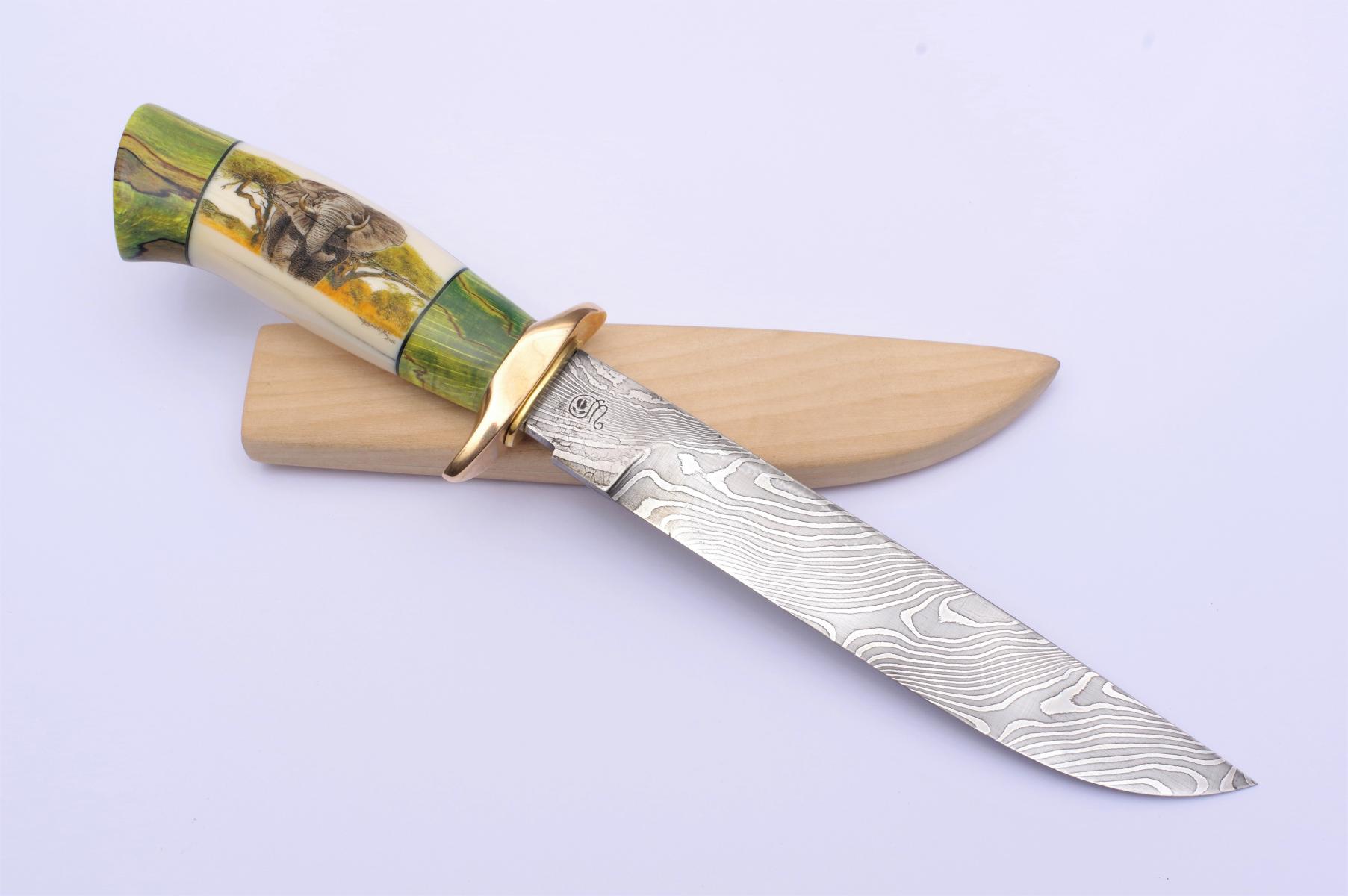 The 'Africa' by French knifemaker Didier Moinel is an impressive hunting knife. The blade is made of carbon damask by the French blacksmith Daniel Vally, the grip is made of stabilized wood and mammoth ivory, with scrimshaw work by Christian Camboulives.

In all it’s simplicity, this is a wonderful dagger, made by the French maker Stéphane Uhlen. The blade is made of xc75 steel, the guard and pommel are made of old iron and the handle consistst of leather rings, pressed on the konical tang.

The French knifemaker Julien Baillon calls this model the ‘Furie’. The backlock folding knife has a blade from RWL34 staal, en scales of Mokuti, a combinatie of titanium and damask.

This colourfull folding knife by the French maker Philippe Soeuvre is called ‘Le Chalaux’, after the name of the river in the French department Yonne, where Philippe has his company Forge du Morvan. The linerlock knife has a blade, guard and pommel made of mosaic damask. The grips are made of turquoise. The blade measures 90 mm.