A few years ago, two Dutch childhood friends started an English-language YouTube channel called Dutch Bushcraft Knives. It has since gathered almost 160.000 subscribed viewers and their weekly videos have been viewed more than 18 million times. European Blades Mag. went to pay them a visit. 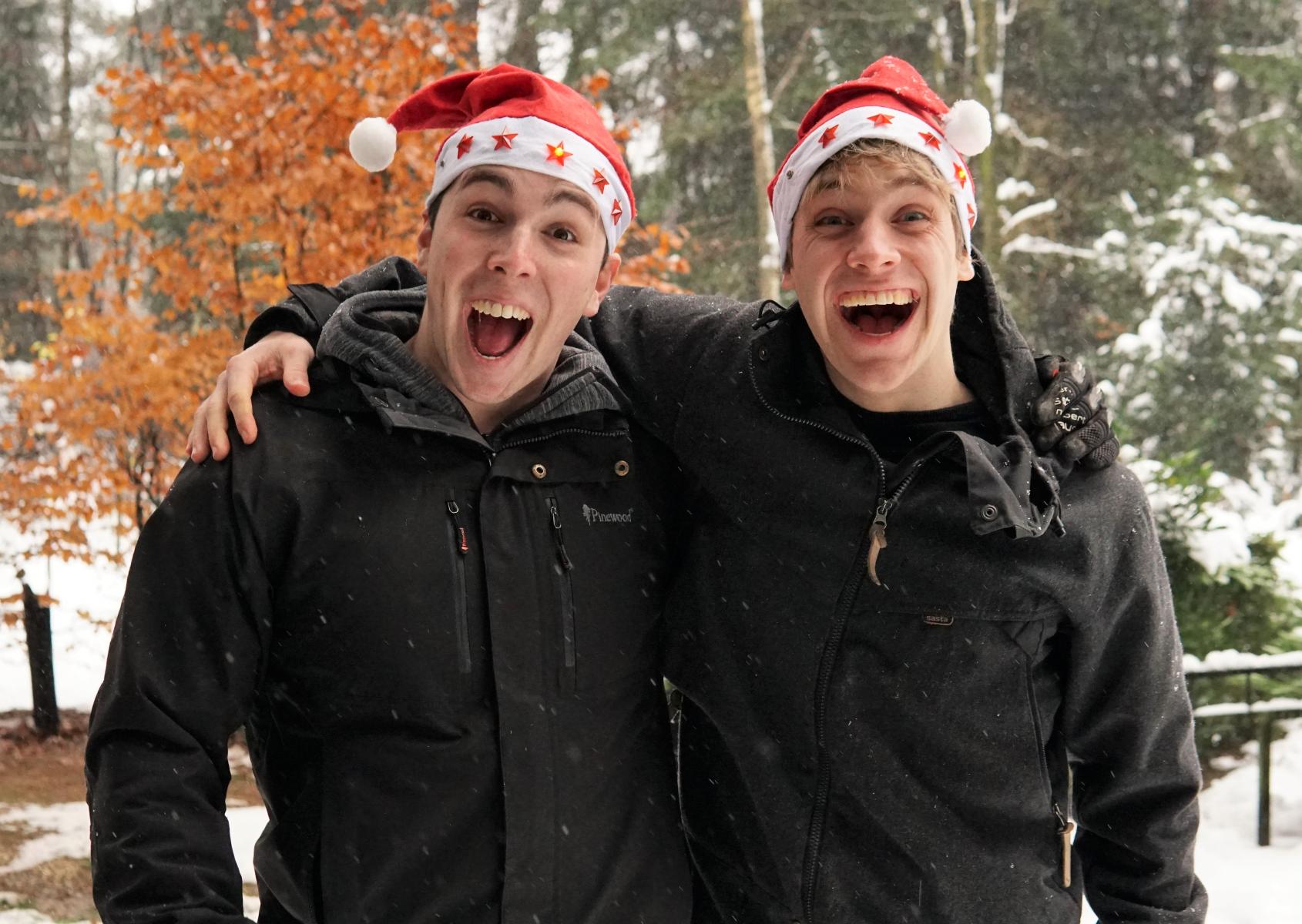 Maarten van der Sluijs (left) and Mikki B. Wessels, the producers of the YouTube channel Dutch Bushcraft Knives.
Welcome to the world of – in no particular order- Maarten van der Sluijs (25) and Mikkie B. Wessels (24), the creators of the YouTube channel Dutch Bushcraft Knives.
Let’s clarify some things first. The channel may be called Dutch Bushcraft Knives (DBK), but it is about so much more than bushcraft. Moreover, while Maarten and Mikkie B. may be seen playing characters, the humour is their own, unscripted. They are like that in real life.
How could one describe their videos? They are energetic, slightly anarchistic, sincere and often hilarious. You’d only have to watch a video to see it for yourself. Some of the titles are indicative of the absurdity, such as: Knives, Survival, Snowmobiles or the popular $1 Knife VS $400 Knife – A Battle to The Death; and Top 10 Things Everybody Gets Wrong About Knives (which includes: “Stainless Steel Can’t Rust”). The format of the show is light but the content is serious. If DBK tests something, then they really test it. In many-a-video you will witness the destruction of knife as well as a reputation. That’s how this channel was able to amass such a large following.

In making DBK they have amassed an impressive collection of knives of which we are showing but a few
for this article. These are the Fällkniven’s that incited their passion for knives.
On the other hand, DBK also has to deal with the obstinacy of people and their digital voices. Maarten: “Take sharpening for example. There are a lot of people who hold to the idea that there is one correct way to do it, because that’s how they learnt to do it. Then they’ll get upset if you do it differently. There are lots of proper ways to sharpen a knife!” 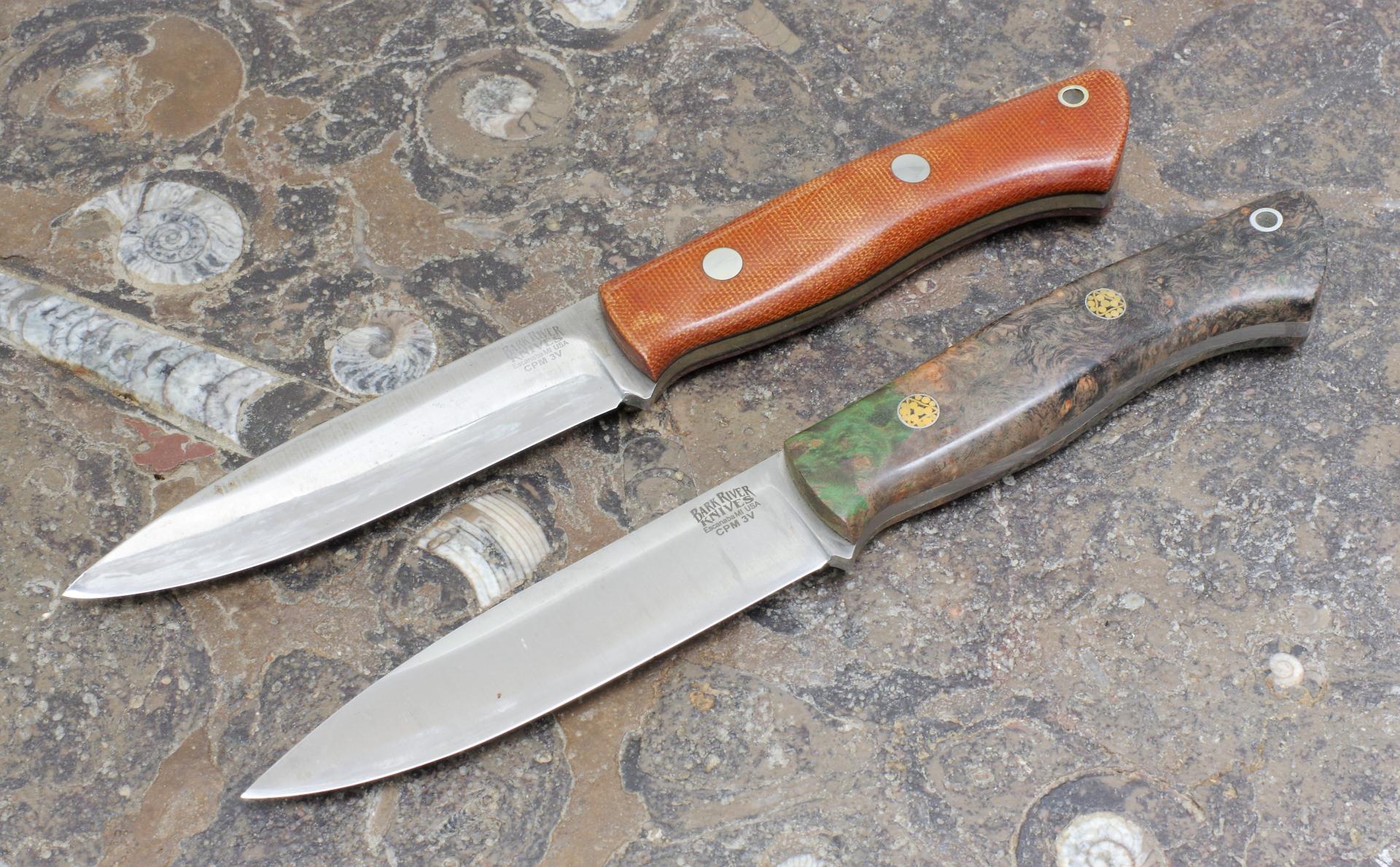 Left: Maarten and Mikkie B. are childhood friends and have been interested in the outdoors since early days.
Right: Maarten’s favourite knife is the Bark River Aurora, CPM-3V. 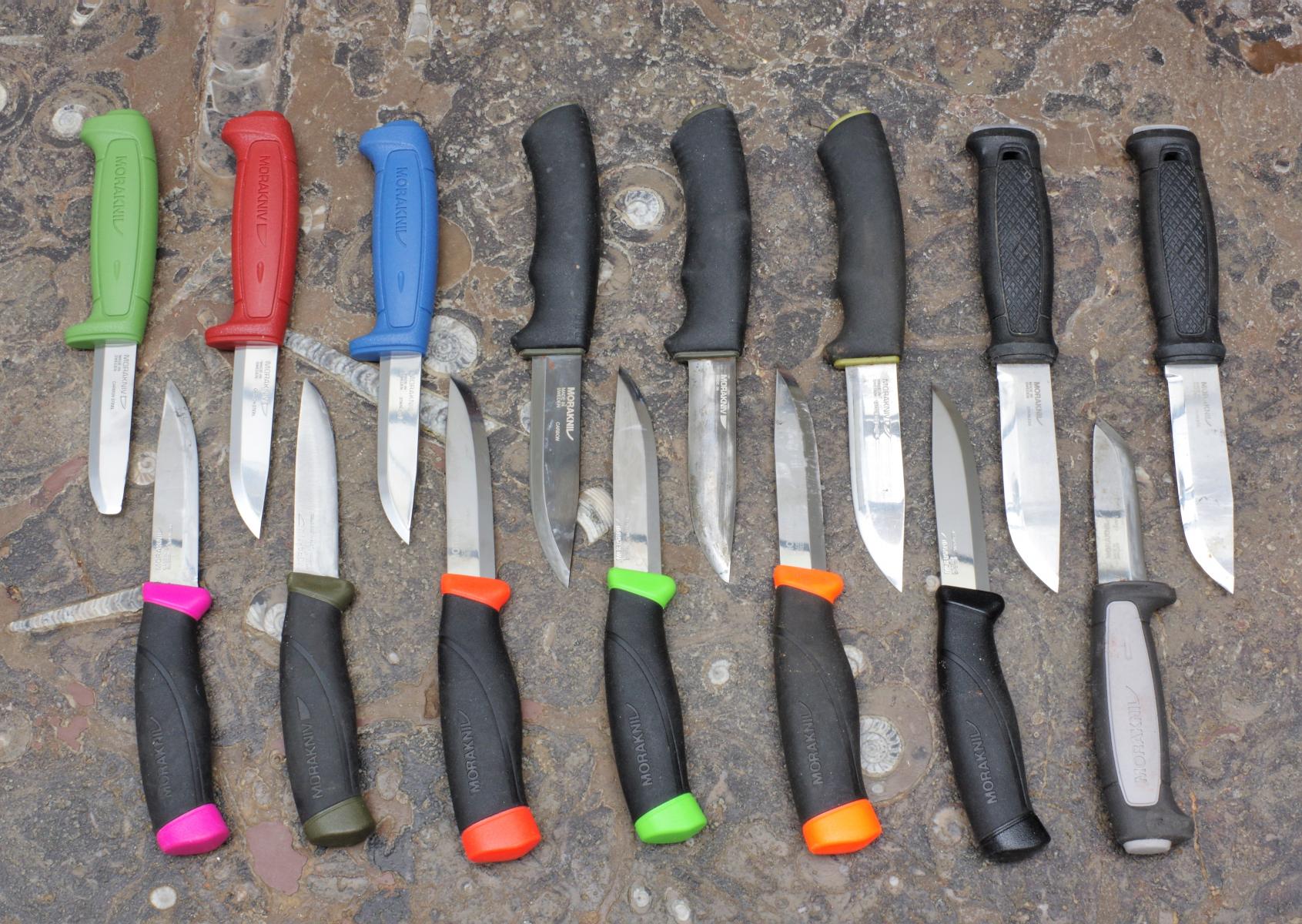 A small collection of Mora knives, Maarten and Mikkie B. say these are cheap and brilliant.
Mikkie B.: “I’m quite recalcitrant. If people say: ‘Bushcraft has to be this way’, then I’ll go out of my way not to do it that way. Some people don’t like that and curse at you.”
Meanwhile their videos are still being produced for the same reason they began with the channel in the first place namely, for fun. That said, of course some things have changed. Their hobby has become a job and a brand, and their viewership has grown from a couple of fans to several tens of thousands or hundreds of thousands per video. This has also spawned a degree of regularity, where a new video is posted online every Thursday. In turn, this means more responsibility and it also forces DBK to plan ahead but all the while holding to the central premise: It has to be fun. 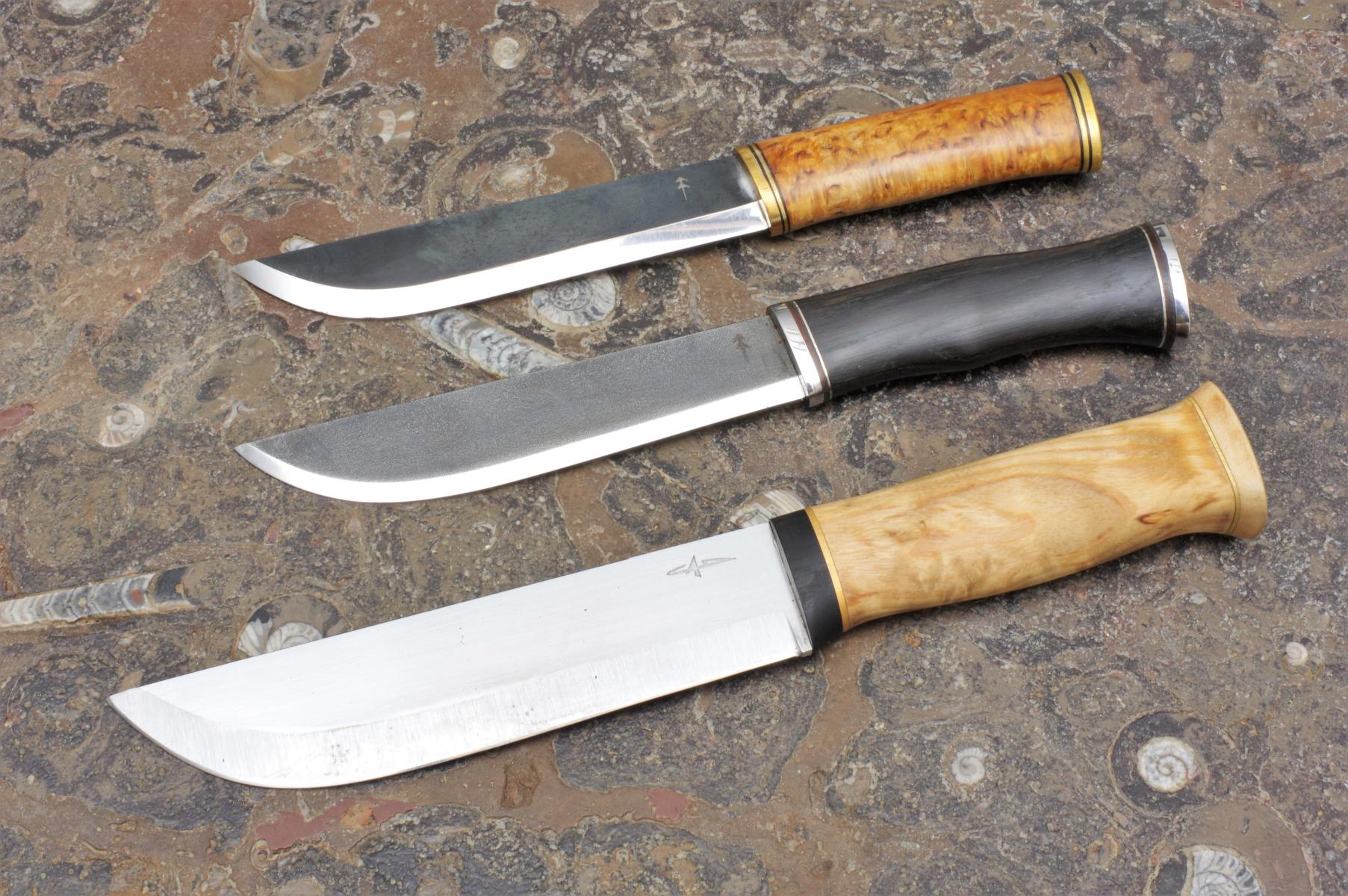 Leuku knives, the top two are Autine Tools and the bottom one is a piece from CAD Knives.

Left: Dulo knives. Right:The impressive Dulo Viking.
Friends
Maarten and Mikkie B. have been the best of friends since their first days of school and played together endlessly. They collected military objects and were prone to hiding in the bushes to ‘spy’ on things, like cows. Some time after that they would watch the Ray Mears’ show on bushcraft on TV and then come to realise that that’s what they wanted to do too. Maarten went online and bought a Ka-Bar from Marktplaats (a subsidiary of eBay). Unfortunately, he quickly discovered that it was a replica made of less-than-adequate steel. It was a rough confrontation with reality: not everything cut and chopped as easily as it did on TV. Then, on a good day Mikkie B. put in a search for the ‘Best survival knife’, and that is how he arrived at Fällkniven. Maarten used his money to buy an A1 and Mikkie B. purchased an F1. “Maarten was always more of a Rambo-type and liked the bigger knives” says Mikkie B. The Fällknivens marked the beginning of an expansive investigation into the types of steel and the quality of knives. Parallel to this search, they were both engrossed in survival practices and bushcraft. Maarten explains: “What you learn at school has nothing to do with our basic needs. I’m not a doomsayer, but I did want to possess the skills to survive.”
These interests were quickly combined with another hobby of theirs, making silly videoclips. One thing led to another and soon Maarten and Mikkie B. had their own YouTube channel. 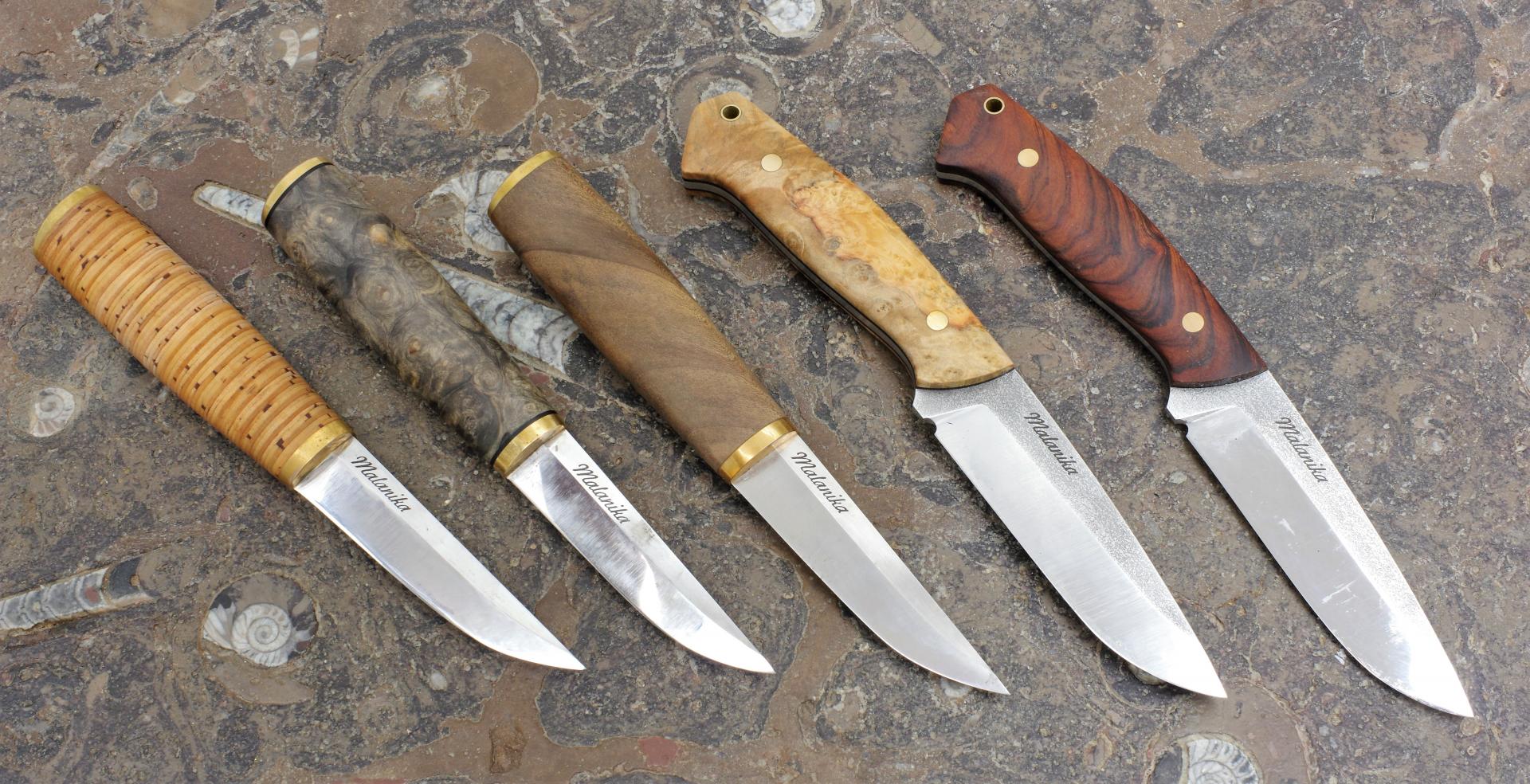 Malanika knives, DBK claims these are the holy grail of custom knives.

DBK tests knives to failure.
In the early videos the knives were the central focus but over time the hosts began to appear in the videos as well. That took some getting used to because nearly everyone has trouble seeing themselves in videos and on top of that they were speaking in English, which isn’t their native tongue. “We never really speak English to each other” says Maarten. However, the formula seemed to work well. Mikkie B: “Once you’re over the first hurdle then a lot of things become possible.” Literally, because Maarten has his own plot of land in a forest in the Veluwe where (nearly) anything goes.
The early days of the YouTube channel were hit-and-miss. Reactions varied from mild praise to downright hate filled messages. After all, what did two kids know about bushcraft or knives? Since then, Dutch Bushcraft Knives has garnered a solid reputation for trusted information and comedic stylings. To the amusement of the creators of the videos it seems that they have inspired people to go out and try things themselves. Mikkie B.: “The objective is to make fun videos. We want to make the outdoors appealing to people who don’t know it like we do. And some people even choose to watch us with their children which is fantastic. We received a message from a dad once who said that our videos inspired him and his daughter to go camping for a week.”

Bark River is one of DBK’s favourite brands.
Fulltime Job
Dutch Bushcraft Knives has turned into a fulltime position for the two friends. A video may take up to 40 hours to produce and Maarten and Mikkie B. will make two every other week. A crowd of followers awaits the video posted every Thursday.
The task division for the videos is flexible. Mikkie B. is often the creative half and takes care of the editing, while Maarten ensures that business stays organised and on-target. However, both are quick to explain that these roles are easily reversed. One of them may write the script one week, and the next, the other will. The person who came up with the script will also decide on what scenes to shoot and use. Often the trickiest part is the theme or setting. If a knife has a particular character its easier to come up with a story however, this isn’t always the case. Yet, they’ve always found a way.
An underlying factor for the success of DBK may be the accessibility to its creators. Mikkie B.: “One of the most important side activities of our channel is our interaction with the viewers. We don’t see them as fans, we present ourselves as friends.”
Maarten: “That’s one of the perks of YouTube. Unlike TV, on YouTube you can talk to your viewers. It does mean however, that we spend a part of each week answering and talking to people in Facebook, Instagram, Email and YouTube.”

A sample of ‘The Punisher’ knives by CAD Knives.
DBK Knife
An obvious question is whether Maarten and Mikkie B. have ever had plans to make their own knife. They tried, they explained, but they stopped with it fairly quickly. “We can’t craft a knife that meets our demands. We would love to present our own knife, a DBK knife, but somebody else would craft it much better than we could. We like to make videos, somebody else can make the knives.” 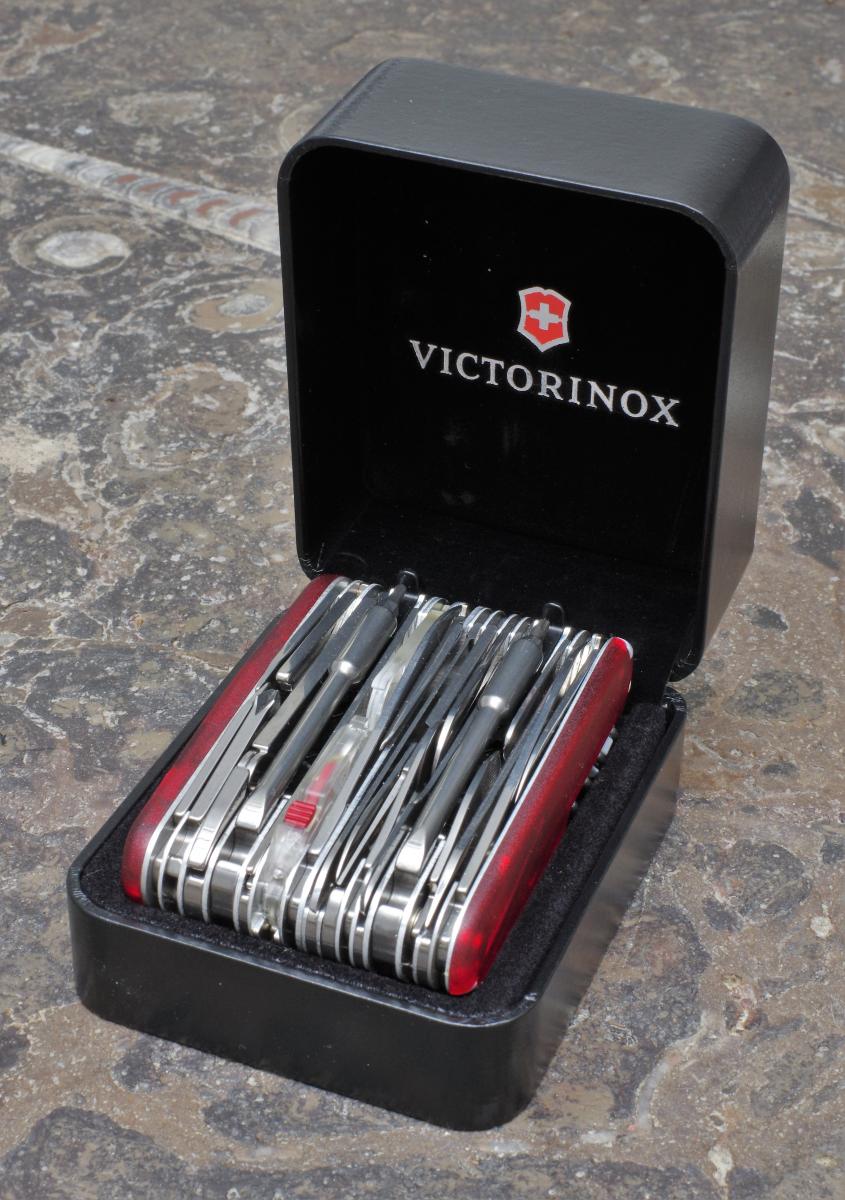 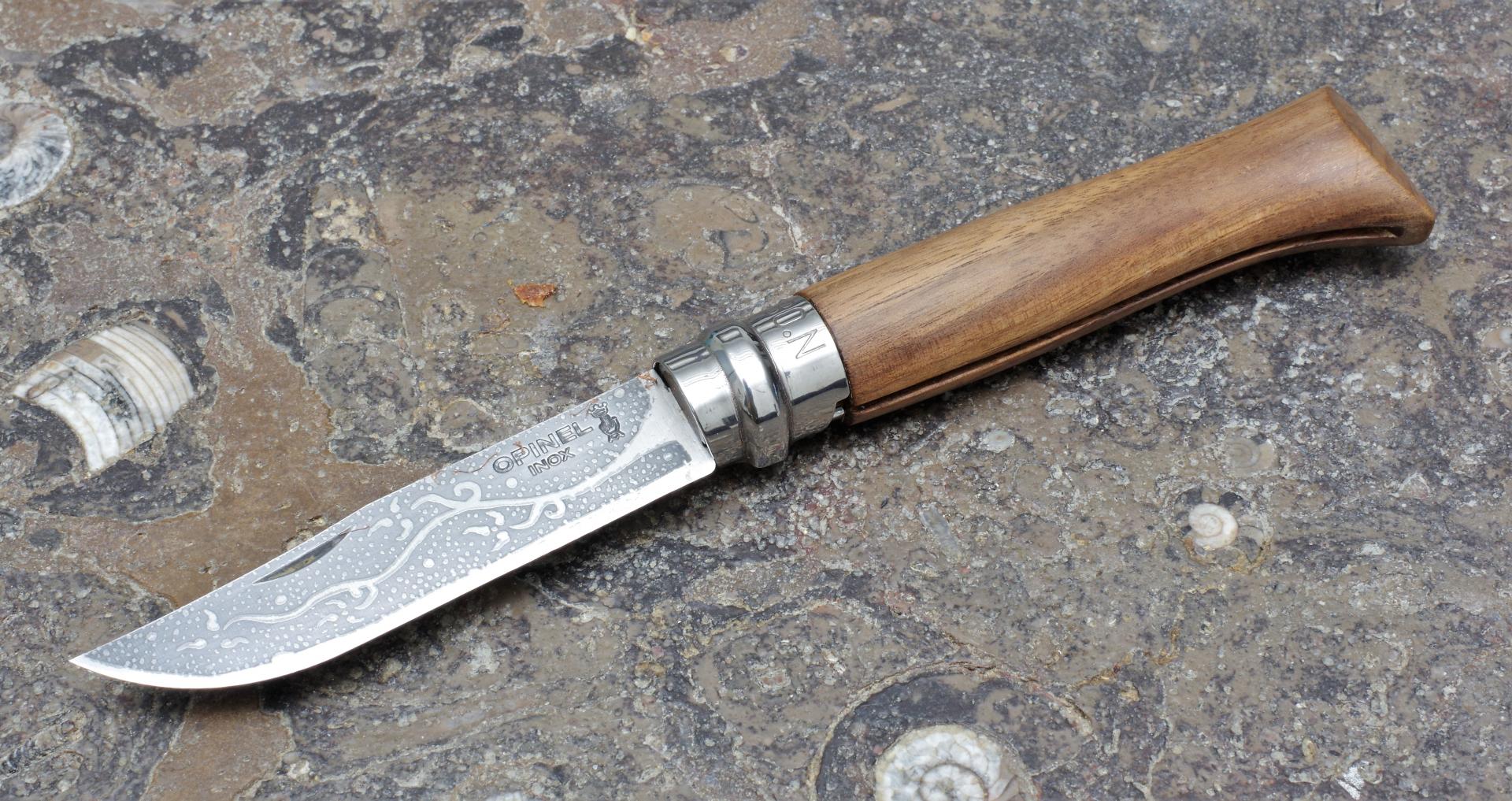 Left: This was a boyhood dream. Right: Maarten’s EDC is an Opinel.
Finally: What are the favourite knives and types of metal of the two gentlemen? With the addendum that this could change again next month they both produced the following lists:
Maarten
The Bark River Aurora of CPM-3V steel
The Fällkniven F1pro of CoS steel
The Malanika Puukko of CPM-M4 steel
His favourite stainless is CoS steel, his favorite carbon is CPM-3V. The steel types for Mikkie B. are the same but he has selected different knives.
Mikkie B.
Malanika Puukko of CPM-4V
Bark River Gunny Scandi of CPM-3V
Bark River UltraLite Bushcrafter of CPM-3V
For those who wish to see more of Dutch Bushcraft Knives please see the Instagram account at @DBKBushcraft, or on Facebook and of course search for Dutch Bushcraft Knives on YouTube to see their show.